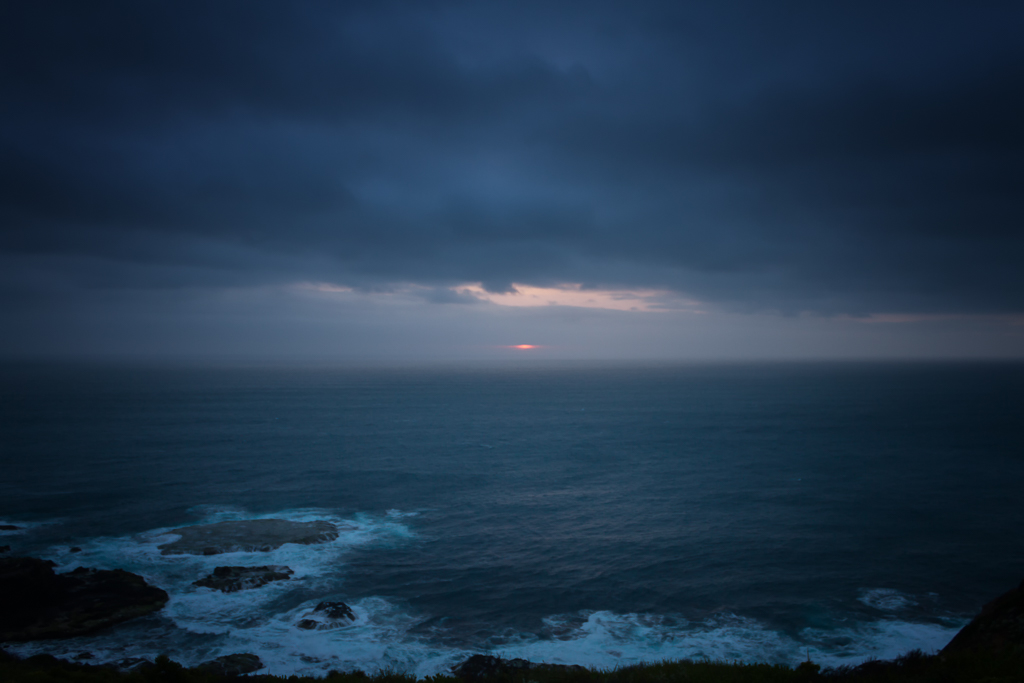 The walk from Cape Schanck to Bushrangers Bay, Mornington Peninsula has been a personal favourite of mine since I first went there in 1983. It’s also listed in my walking guide books, but I’ve been there so often I didn’t need to refer any for this trip. It was a matter of packing up and heading down there. In theory, it should be a straightforward day, but it was a bit more eventful than we thought, as we dealt with a mixture of Liberace, lack of chicken, the Night Stalker and nudity.

The drive from the wrong side of Melbourne is a long one. I should have gone for the, ‘cough up the money and use the EastLink tollway’, but instead went for the cheap method. A convoluted journey via Hastings. Traffic in Melbourne sucks, and it’s especially worse on a Sunday heading to the peninsula. After crawling in traffic for an eternity we arrived at Hastings and a quick snack was now on the menu.

Ben had ‘chicken roll’ written across his face, so we decided to attend the local barbecue chicken shop. We sprinted inside and found no one behind the counter, but it gave me a chance to eye off the menu and a row of gleaming barbecue chickens sitting in the warmer. I waited and waited until I had to ring a small bell on the counter.

Out came a bloke and my order was simple. “Two chicken rolls please.” The reply was a little bit different than what I expected. “No, not today.” Oh, okay. It reminded me of a time when I went to ‘Red Rooster’, ordered and the reply was, “Sorry, we’ve run out of chicken. Is there anything else you want?” Mm…I’m thinking my choices are limited when that’s what they’re supposed to sell? “Can I have a piece of corn instead?”

After the chicken fiasco, we continued on until arriving at the Cape Schanck Lighthouse carpark, which was our starting point for the day. It’s a popular spot and I noticed dozens of cars were already there. I looked a bit tool-like, putting on a heavy backpack for a casual walk, but that’s the price one pays when they’re trying to get fit again.

Whilst I was getting kitted up for the walk, our attention was drawn to a family nearby with thick American accents. “Harry!  Harry!” was the cry from the woman yelling in disgust and I thought ‘Harry’ was one of the kids. No, Harry was a bloke in his 50s with small, running style shorts pulled up just short of his armpits. I’ve heard the term ‘Harry High Pants’ before and guess what? His name is Harry and his pants are high. I found it quite entertaining. The good times have to end somewhere though and we were off. 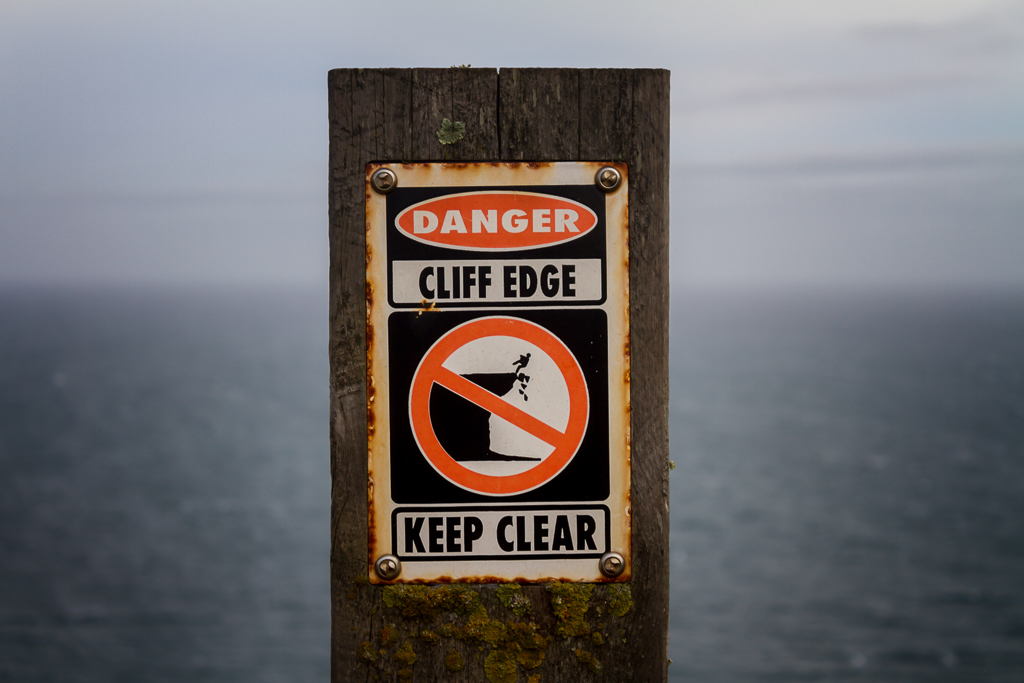 The walk is nice and simple, as it follows the cliff tops from Cape Schanck to our destination, which was Bushrangers Bay. Apparently there’s a real bushranger story, even though for years I thought it may have been an urban/semi-rural myth. There’s no point in me banging on about the origin of the name, so being a good bloke, I found in this link from the ‘Discover Mornington Peninsula’ website which gives a pretty decent explanation.

The path is wide and easy going with the odd undulation. Abundant coast line views kept us occupied, but there were a number of grasses, which were quite good for close up action. 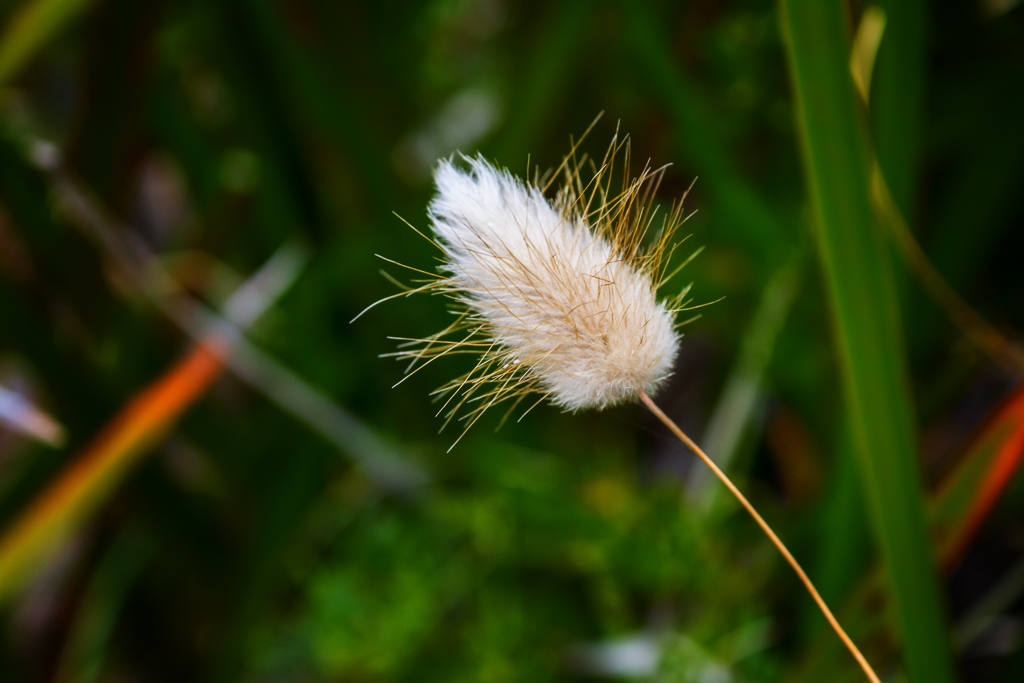 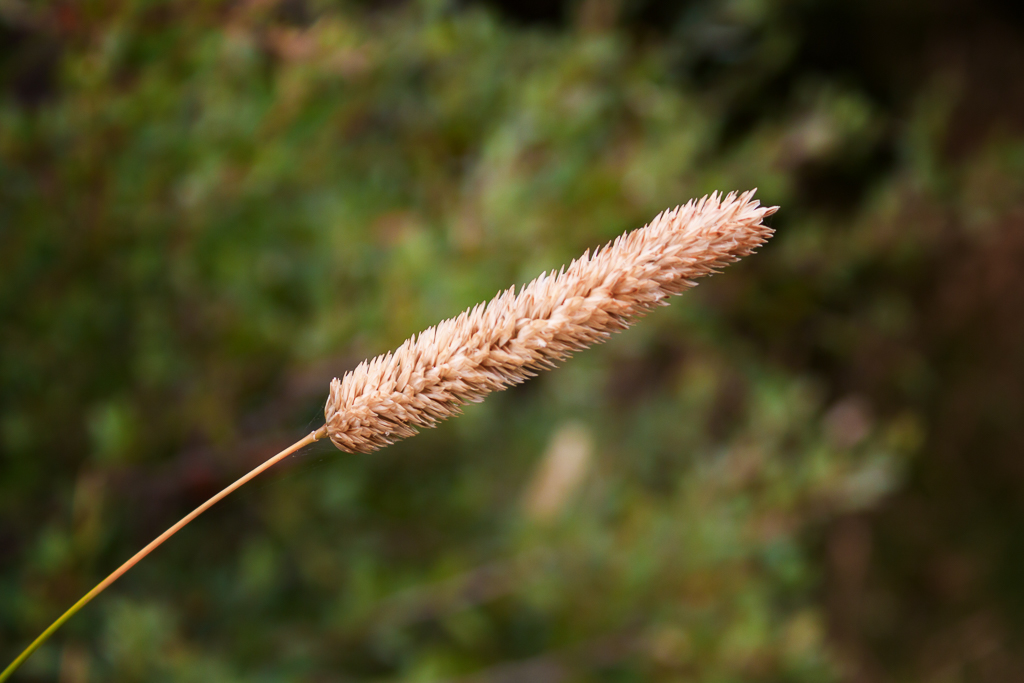 On we walked and there are a couple of sections, where the vegetation has created a tunnel-like effect. Quite nice for photos, as long as the ‘Night Stalker’ isn’t coming from the other direction. What? Was Richard Ramirez out hiking? Yes he was, or at least it was a dead ringer of him. I said hello as he passed, but he didn’t really reply, which is fair enough when he’s meant to be a serial killer. A woman who was walking with him said hello though, which was nice. 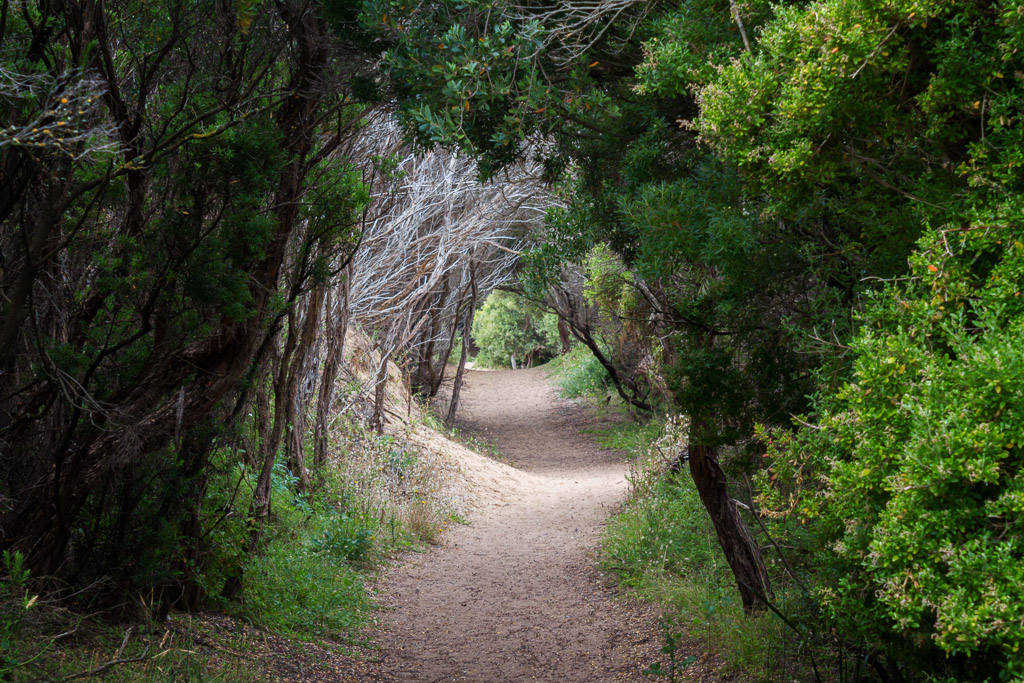 The walk then continued until it descended to Burrabong Creek. This has a boardwalk over it for an easy crossing. I remember the first time I came here the creek was quite open and a nice spot to spend some time. Now, it’s full of vegetation and I’ve no idea what’s weed and what isn’t. I definitely know it’s quite choked and the water wasn’t visible at all, which was never the case years ago.

I stopped on the boardwalk to have a perusal, but my pondering was interrupted by some loud footsteps heading my way. Suddenly a middle aged bloke appeared, with more gold jewellery around his neck than Liberace. As he approached he made no attempt to walk around me. I shifted to allow him to pass, otherwise he would have bowled me over, as he didn’t reduce speed at all. I made a snap judgement of him and it was along the lines of ‘confirmed knob’. There was no hello either from the jangling necklaces as they sped by.

Bushrangers Bay was now in sight and it just a matter of walking downhill to the beach. 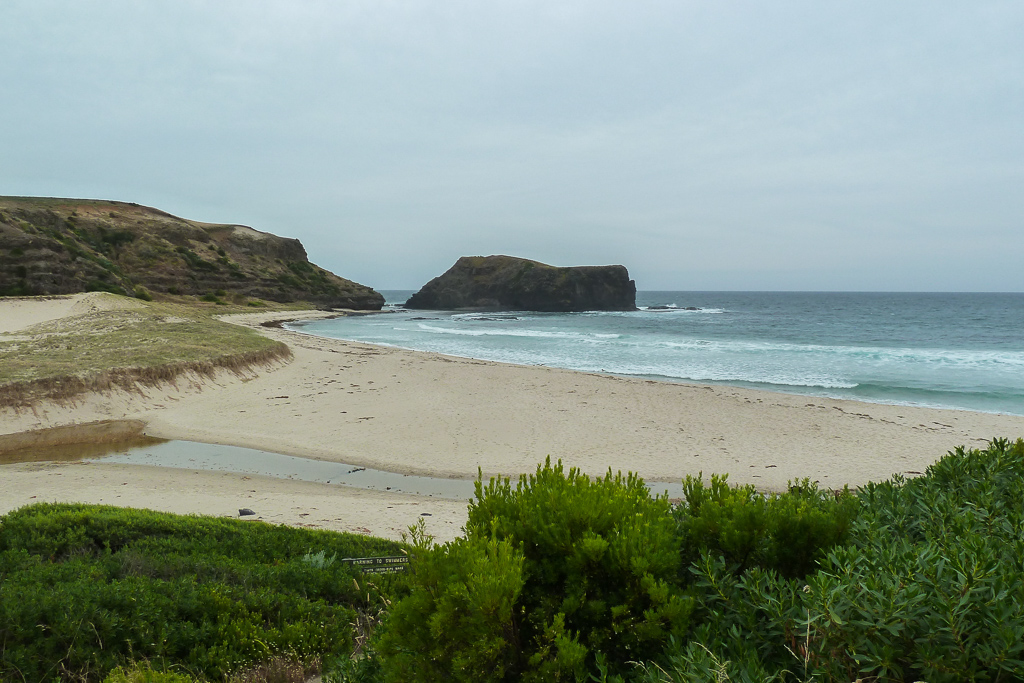 It’s always been a great spot and even better is there’s no carpark close by. If you want to get there, you’ve got to walk, which I’m sure puts a few people off. Over the years of visiting, I’ve never seen any more than a handful of people on the beach.

We’d arrived and now it was time to relax. Out came the sandwiches and a nice ceramic teapot, which is perfect for hiking. The tea was on and we found a nice little alcove in some rocks, which kept us out of the wind. It was quite peaceful, whilst planning our next move. 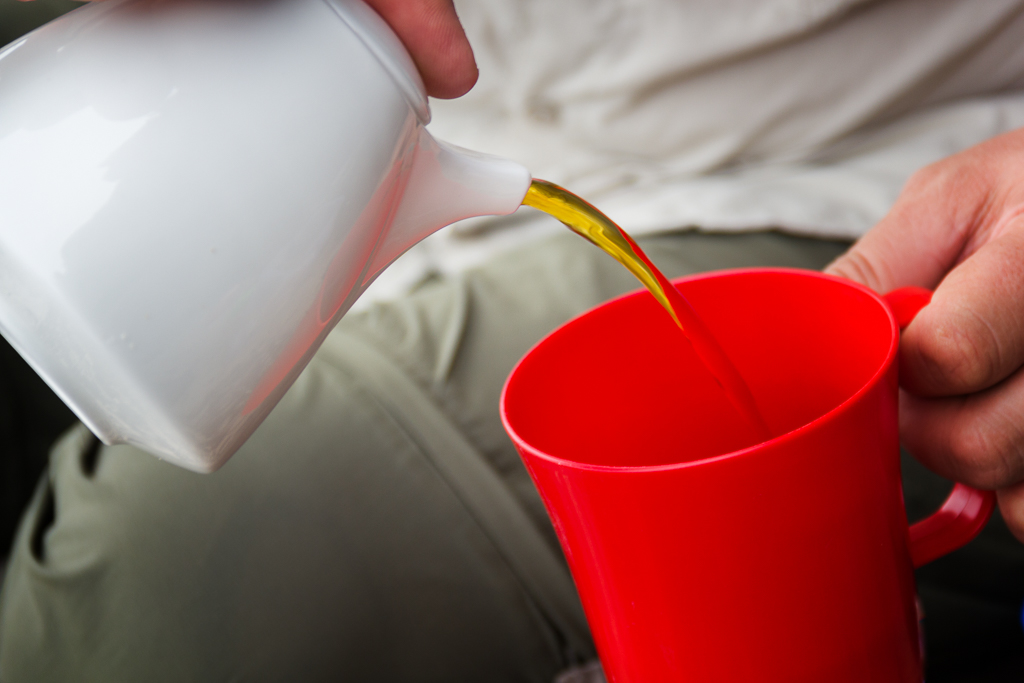 After filling ourselves with bread and Dilmah, we decided to head to the far end of the beach towards a large outcrop called ‘Elephant Rock.’ In the million times I’ve walked to the bay, I’d never even thought one could climb it. It’s only accessible at low tide and whilst taking a few photos I heard Ben shouting from above. I looked up and he was standing on top of it. What? How did he do that? I walked around to the ocean side of the rock and it was obvious how one gets up there. A series of rocks, which are almost like steps leads to the top. I summitted quite quickly and noted the height was 35 metres. Altitude sickness! 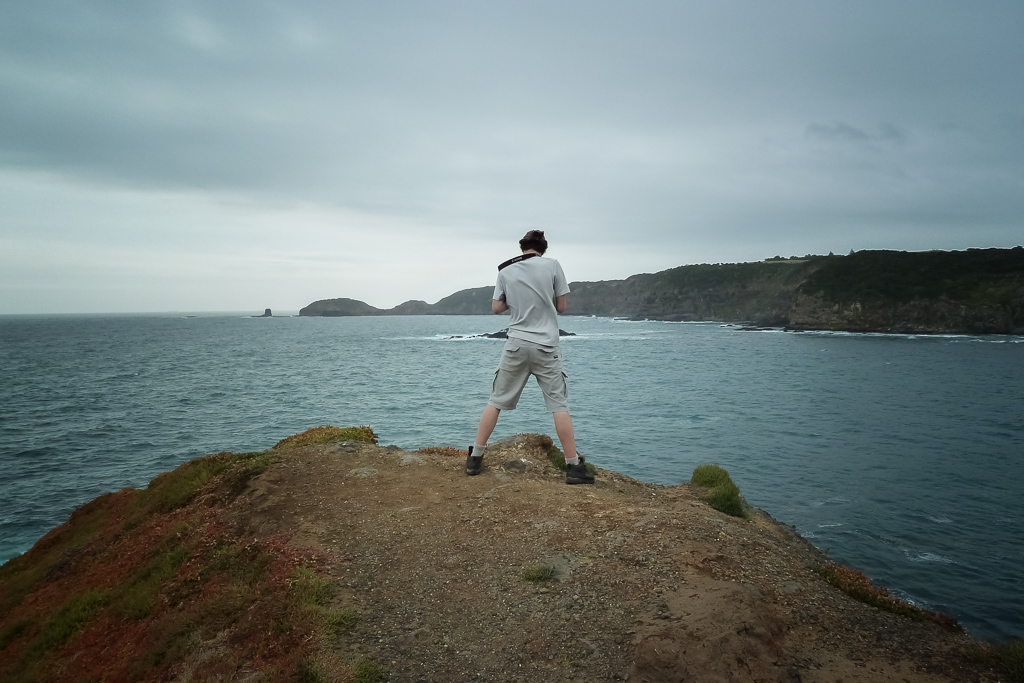 The view was great from the top, and a number of rock pools were keeping us entertained, as we watched the waves breaking below us. 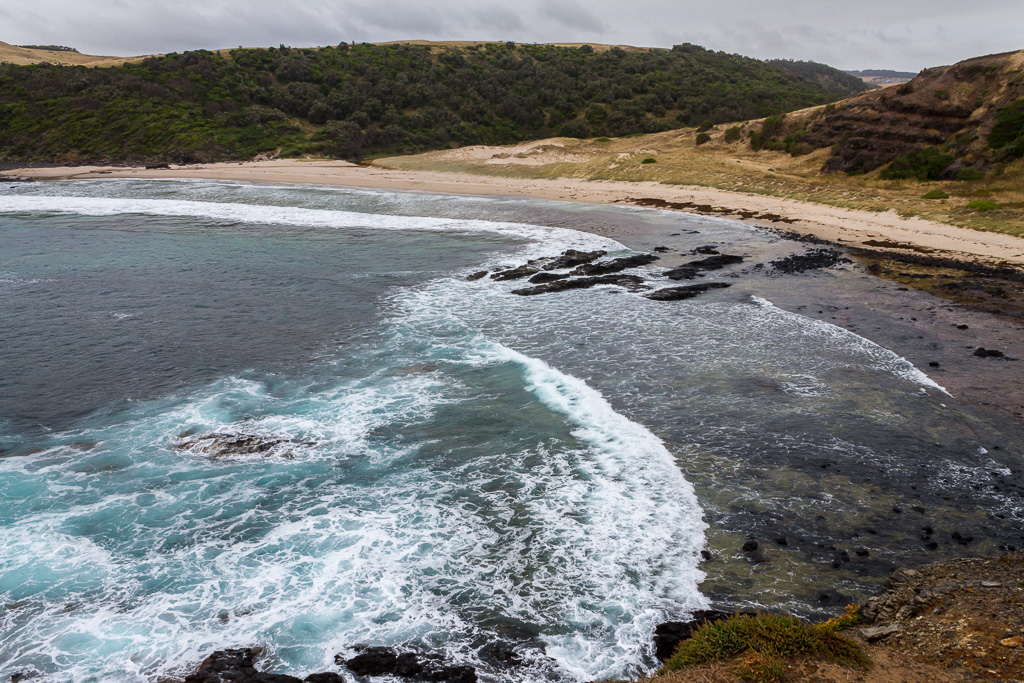 My DSLR seemed to be playing up, as no matter what I did, it wouldn’t hold its focus. I couldn’t work out if it was the camera, lens or the operator. Feeling frustrated, I contemplated hurling it into the ocean and I think it would have felt quite liberating. Either into the ocean or under a truck. Mm…too many options. 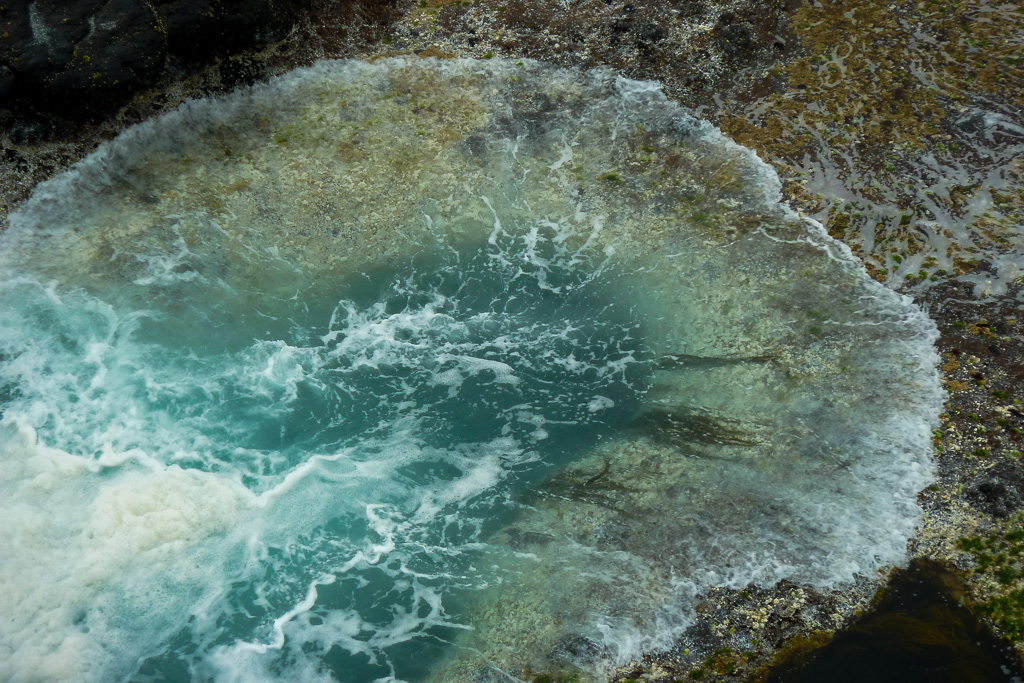 We spent some time mellowing out on the summit, but all the while looking for other photo opportunities. Further along the coast a rock arch where the waves were breaking though looked quite interesting. It definitely warranted a closer inspection. 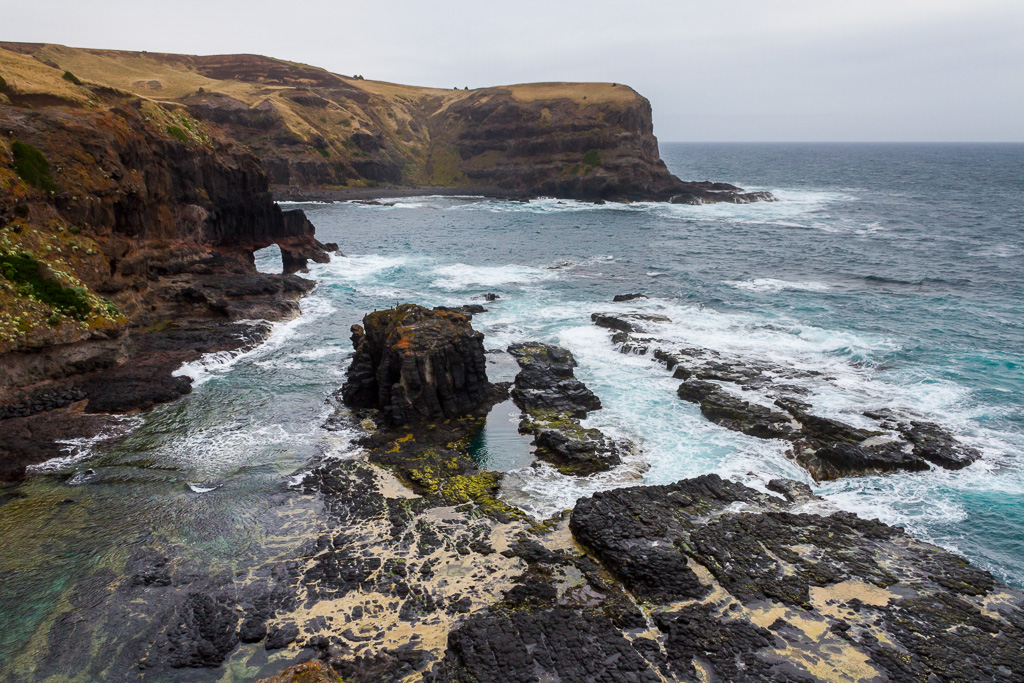 Wandering down, we kept our eye on incoming waves as we inched towards the arch. I’d never looked at it before and it’s quite spectacular when the waves broke through it. It’s a low tide job though, as you’d never get there if the water is up. It’s also the limit of walking, as the arch blocks the way for strolling any further. 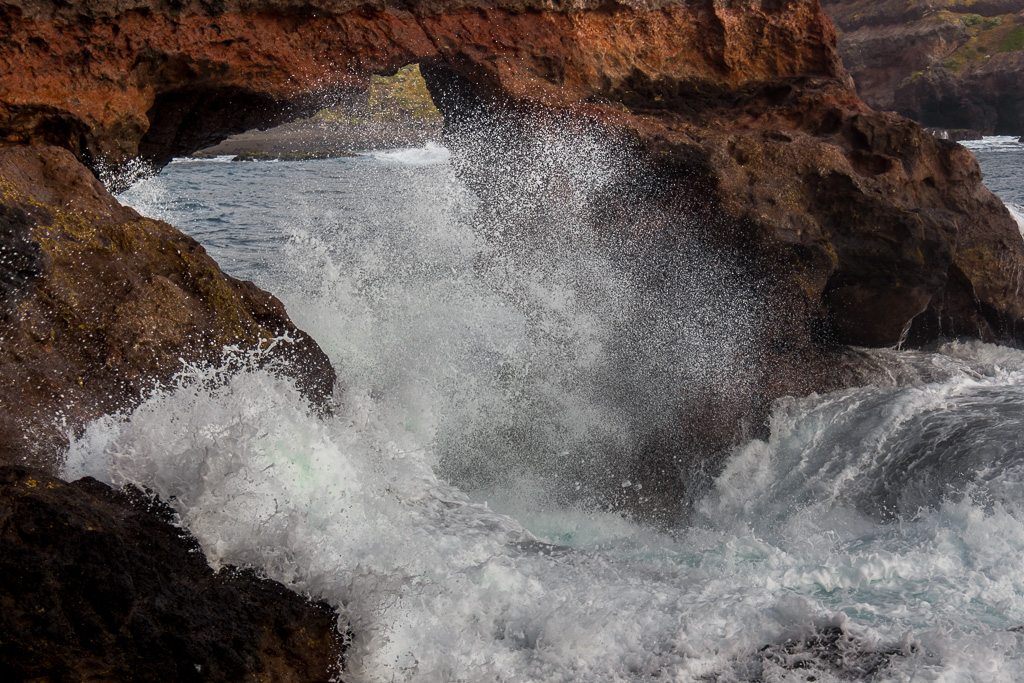 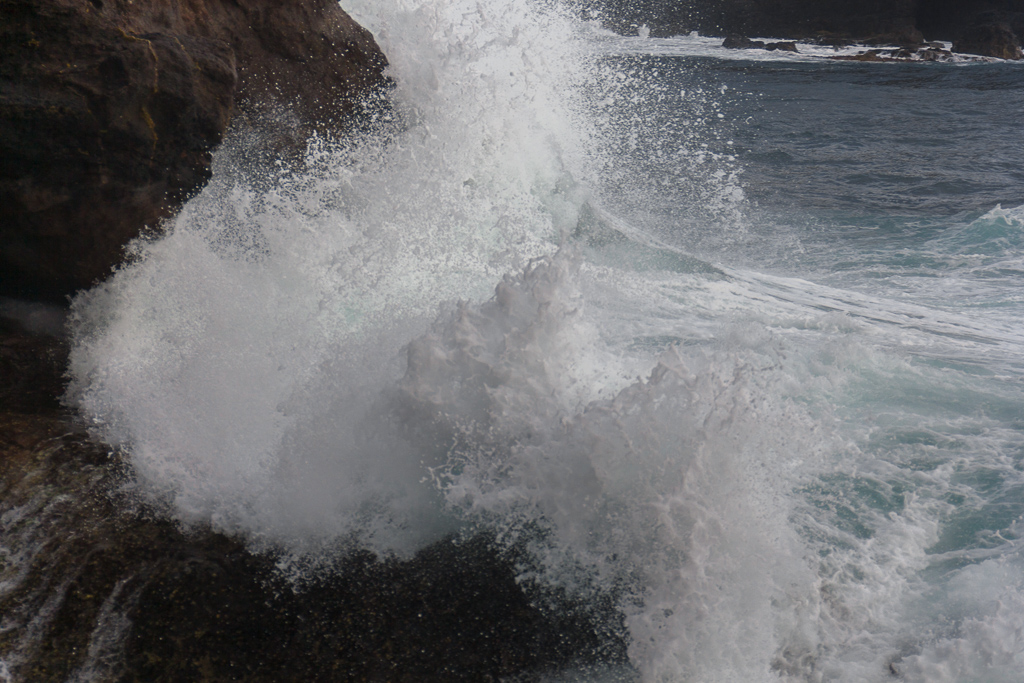 We took a few photos, whilst waiting for a super-sized wave to come in. It didn’t really happen though. As we stood around, a sooty oystercatcher, complete with water dripping beak, joined us. 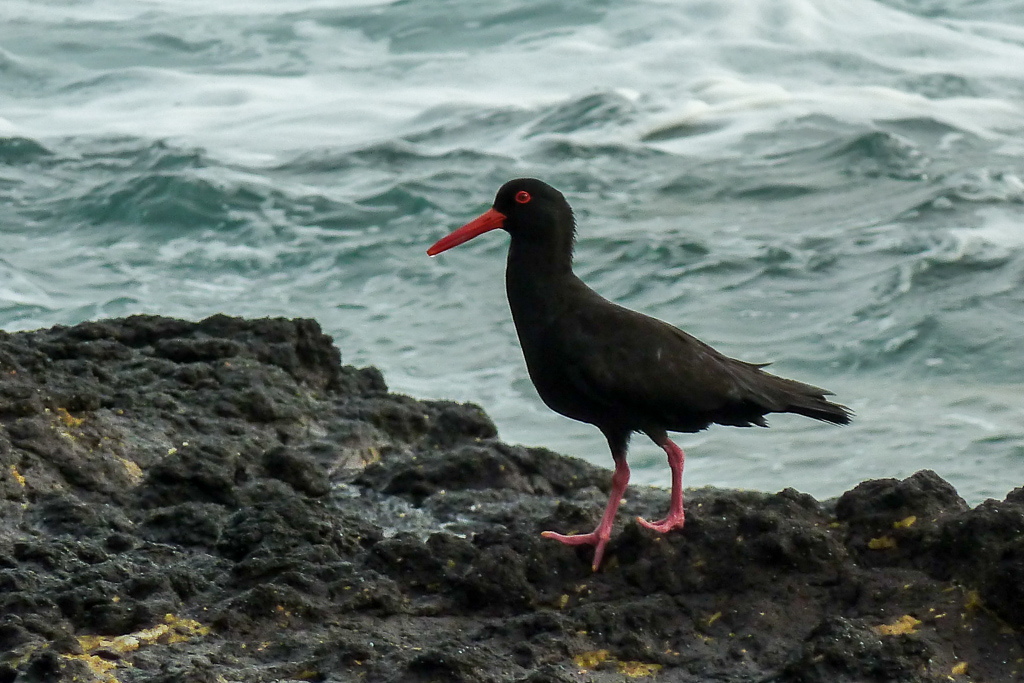 After spending quite some time at the arch, it was time to head back. I assumed the tide had turned and it was wise to get off the rocks. We started heading back to the beach. 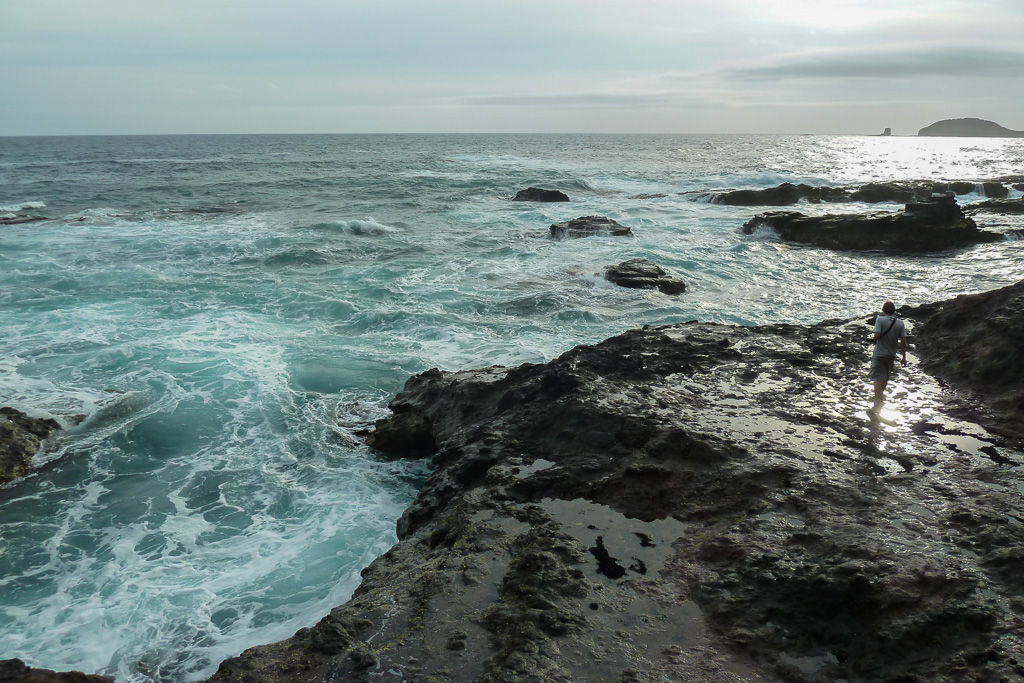 Rock platform near the arch

Reaching the sand, we were surprised to see a couple at the far end of the beach who were naked. It wasn’t what I’d expected, but they must have gone for a bit of a skinny dip (maybe?!) As it was late in the day, I guess they wouldn’t expect a couple of hobos to suddenly appear from the rocks.

We waited at a distance until they got dressed, as we didn’t want to stroll up and freak them out. Random nudity doesn’t really do it for me like it did 20 years ago! The dressing time gave me a chance to eye off what looked like a juvenile Pacific Gull near the water. 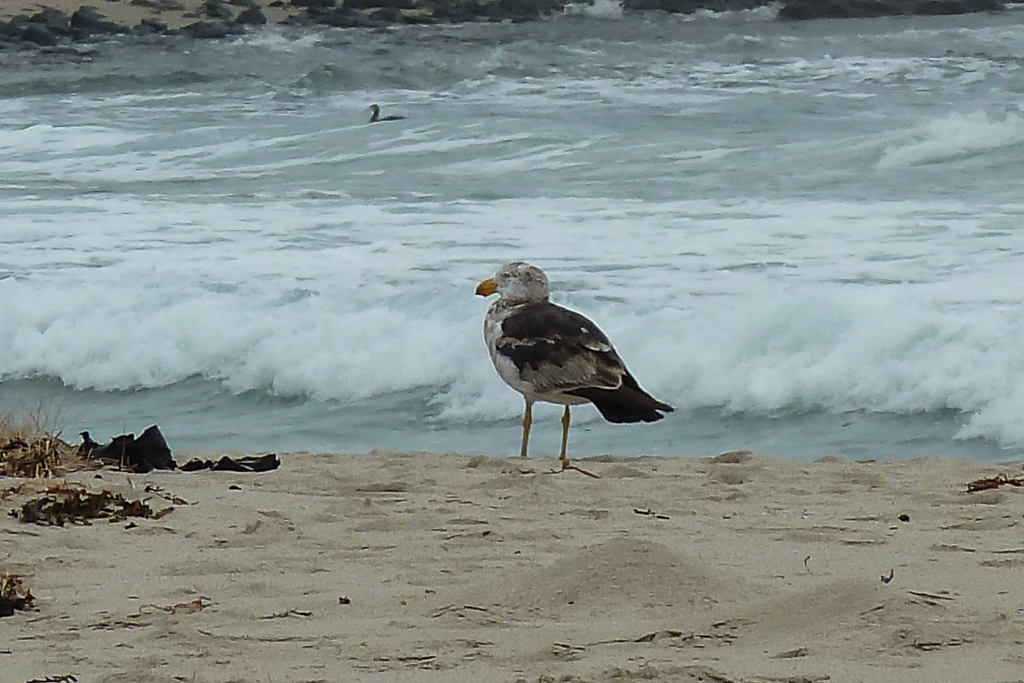 Once the nudists were covered up, we moved past and left the beach. Climbing the hillside path, we motored on, as it was getting a bit late in the day. I was hoping to make it to the carpark before dark, as I wanted to try and get some sunset shots of Cape Schanck Lighthouse. 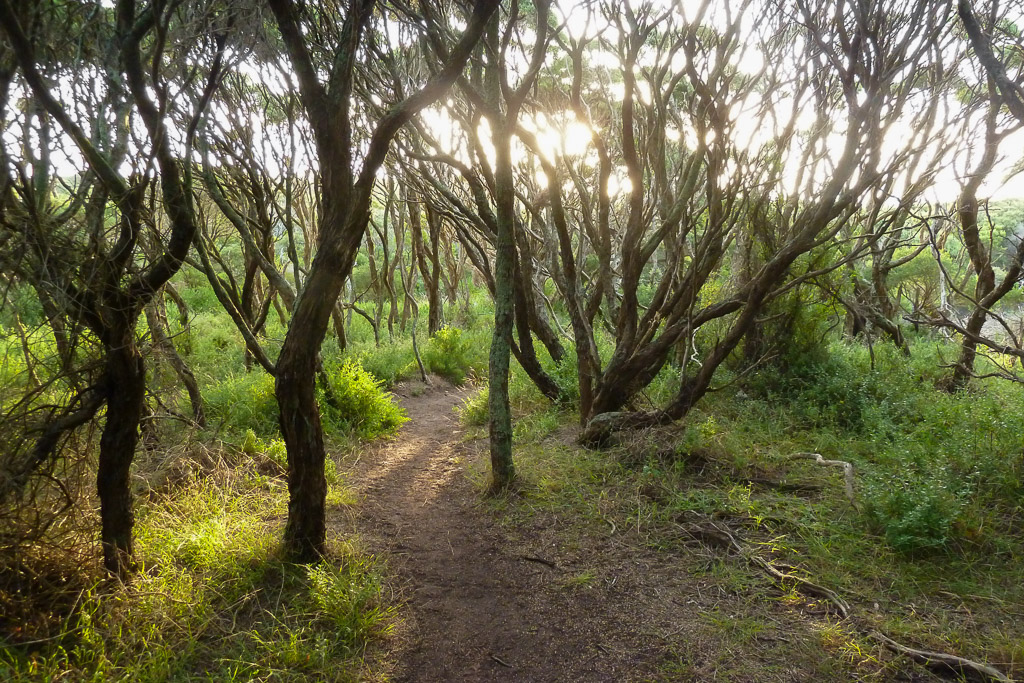 Ben had way more speed than me, so he’d left me far behind. Finally, as I approached the carpark, I heard what sounded like an insane buzzing sound. Similar to what I normally hear in my ears after listening to Joy Division at full throttle volume.

I was intrigued to see what the noise was and as I walked out of a thicket of trees, I was confronted with a bloke playing with a remote control car in the now empty car park. What’s even weirder is his girlfriend was filming his car racing around. No, not filming him. Filming the car. It was all quite epic.

Ben had been waiting for me for a while, but I’d made it back in time for the sunset. It was a bit bleak, but there was some potential, so we grabbed the tripods and set off to a few spots nearby, which overlook the coast and Cape Schanck Lighthouse.

Setting up, it was a mixed bag, but there was a few moments of lovely light as the sun sank beneath the waves. 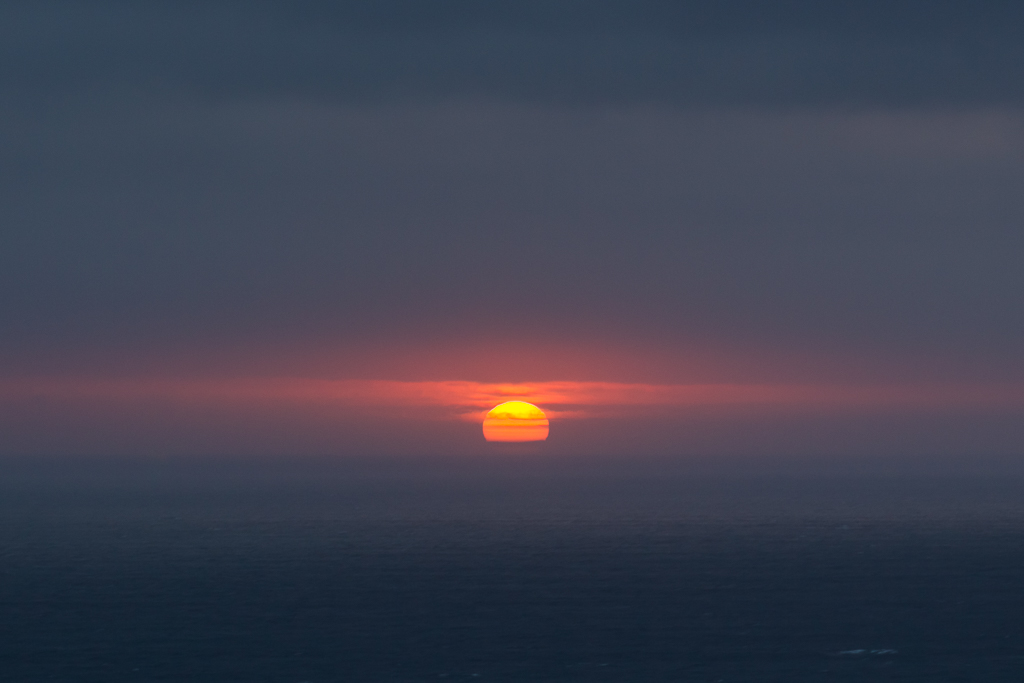 We didn’t really get the photos we were hoping for, but the lighthouse still looked great as the light faded. Another day and another walk done. 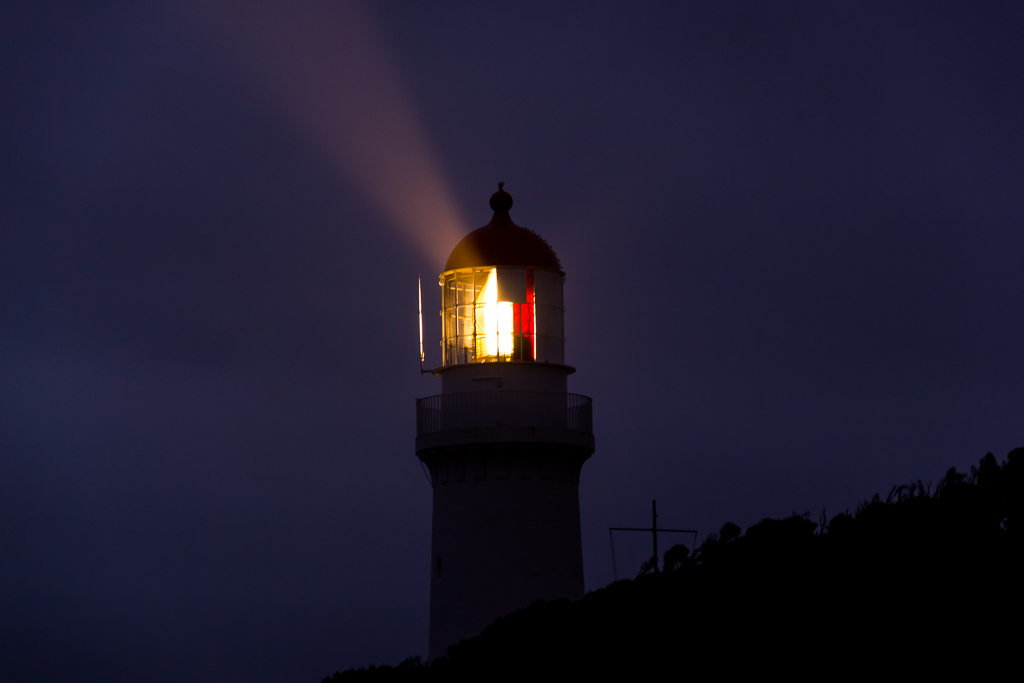