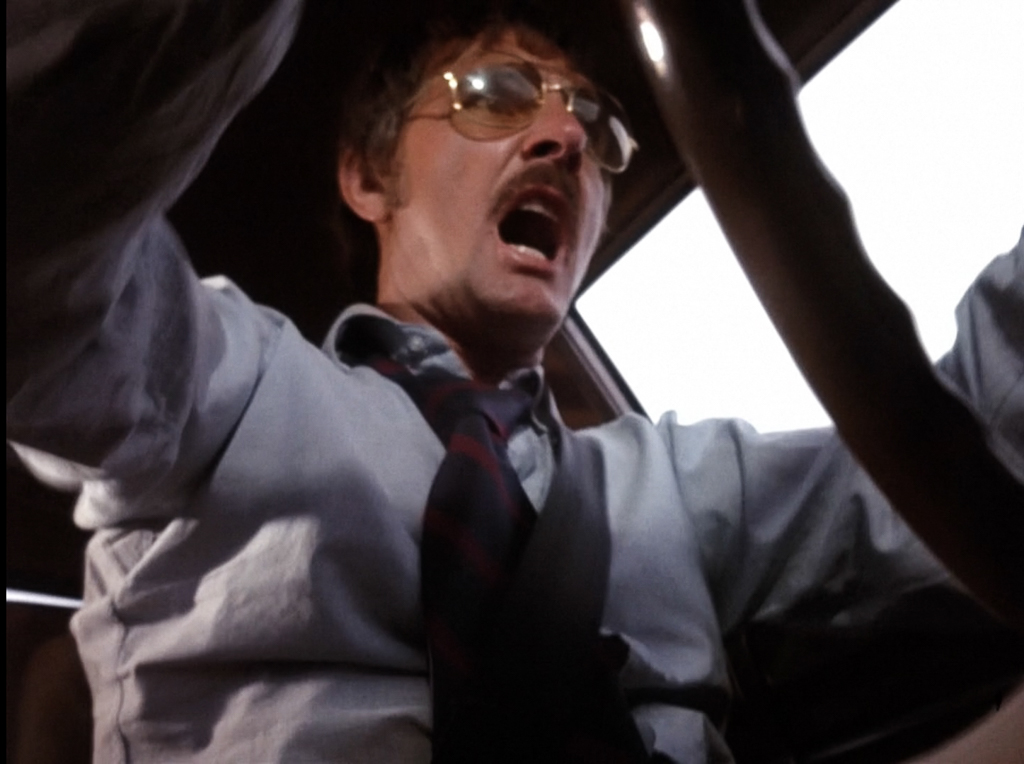 You’re probably looking at the photo above and thinking to yourself. Is that Dennis Weaver? From the movie Duel? You’re on the right track, but unfortunately you’re wrong. It’s not him at all. It’s actually a photo of me. Taken whilst driving home after the Viking circuit, Alpine National Park. We had a lovely time. Can you see the joy in my face?

Anyway, I must also begin with an apology. I’m sorry you’ve all had many sleepless nights, wondering where I’ve been and why I haven’t been posting on the blog. Well, I’ve suffered the hiking blogger’s worst nightmare. I’ve been out walking and haven’t had time to write up a number of tales of woe.

I’m back now though, with a matchbox full of hikes to talk about and I really can’t think of a better place to start than this one. The Viking circuit in Victoria’s Alpine National Park has been on my radar for a while. It’s a sort of round trip on a map with bizarre sounding terrain. I mean, come on. Mt Despair, Horrible Gap, Mt Speculation for starters? Things get worse as there’s a direct assault on Mt Buggery, which if I look at the map now, also contains the disturbingly named Lickhole Creek. Guess what though? Before I get into this introduction post, here’s a little quiz. Which of the following are correct…?

A) “Damn. This water’s cold. Who’s idea was this?” – General MacArthur.
B) When DB Cooper jumped out of the aircraft he was wearing a powder blue safari suit and shouted ‘Hurrah!”.
C) As a young child, my brother and I saw a bolide with an accompanying audible detonation and was so convinced we were under attack from outer space, I cried hysterically for hours. As a result my brother ridiculed my behaviour for the next 20 years believing I lacked masculinity. Even though I was only five years old at the time this happened.
D) “This is a four day walk. We can do it in three.” – MK
E) When Nero ‘fiddled whilst Rome burned’, revisionist history applied censorship and decided he was using a lyre. In fact he was sighted by Tacitus with a fearsome two-handed grip under his cloak.

How did you go? I bet you’re scratching your head, as they’re all possibly correct. Okay, I don’t want to keep you in suspenders. The correct answer is both C and D. The others could be true as well, but I just can’t confirm their veracity right now.

Now cast your mind back. Who remembers the lean and mean, hiking machine ‘MK’? A standard Dutch six footer who’s headstrong? Oh yeah, the conclusion to my extensive research of the Dutch, is they’re so wired due to growing up below sea level. Who wouldn’t be highly strung? Surely you could imagine going to bed nervously wondering if that kids finger can successfully keep the dike plugged throughout the night?

Anyway, you’ll have to go back a few years to the last time I walked with her. The problem is it incorporated a late night finish near Mount Kosciuszko, which concluded with an exploding mattress. I felt I was close to death at the end of that walk due to fatigue, but somehow she convinced me to accompany her on the Viking Circuit. Why would I do this?

So, that’s just the start of my problems. I took the walk notes for the Viking Circuit from John ‘Count of Cardiac Arrest’ Chapman’s, ‘Bushwalking in Australia’ and he suggests it’s a four day walk. Mm… That sounds pretty good, doesn’t it? Nope, not according to MK. She concluded only a bunch of ‘funny boys’ would do it in four. ‘Stand up and be counted by doing it in three’, was the thinking. The trouble is, I was quite frightened, but due to putting this walk off for ages, it was either now or never.

Is that it? Oh no, it doesn’t end there. She also decided to wheel out some heavy artillery by dragging along some bloke who looked even more obscenely fit. I mean, he’s so in shape, he grates his cheese on his abdominals. I suppose for the rest of this hike he has to have a name? I’ve settled on the ‘General’ as his moniker.

Okay, that’s officially it. The thing is how do I write it up? I’ll tell you how. It’ll be done in the traditional Fiasco method of being completely overblown. If you look online there’s only scraps of information about this walk, which seems to be a bit odd considering it’s an iconic Australian Alpine hike. Well, no more. This will be the quintessential report of each day of my travels including GPS readings.

As I’ve bored you with dribble, I might as well show you some photos to give you an idea of what’s to come in the following posts. There was traditional alpine mist… 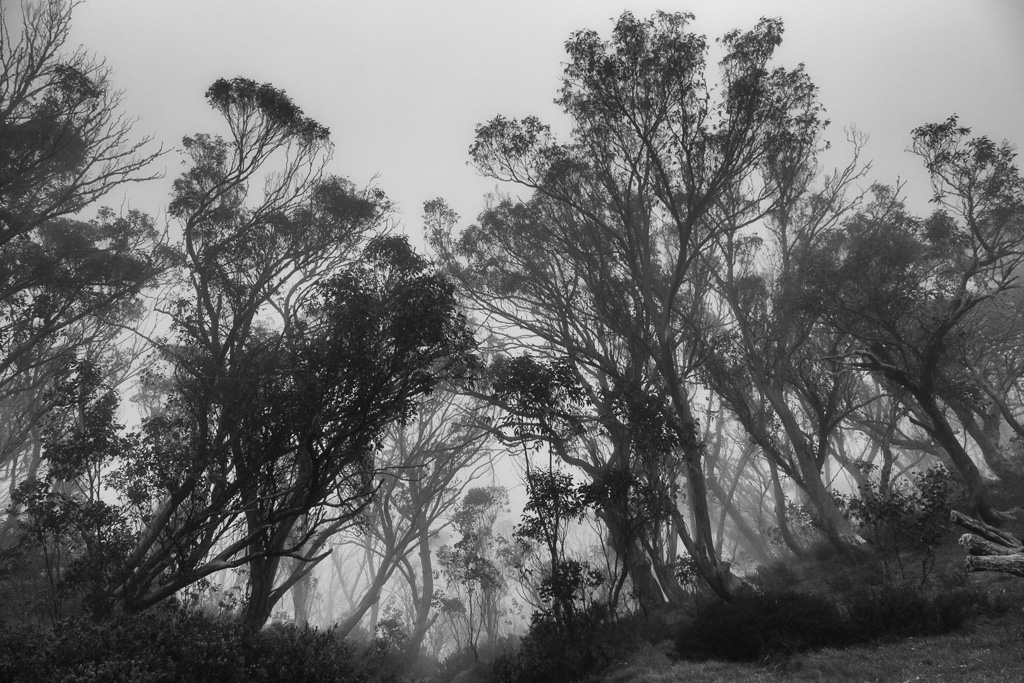 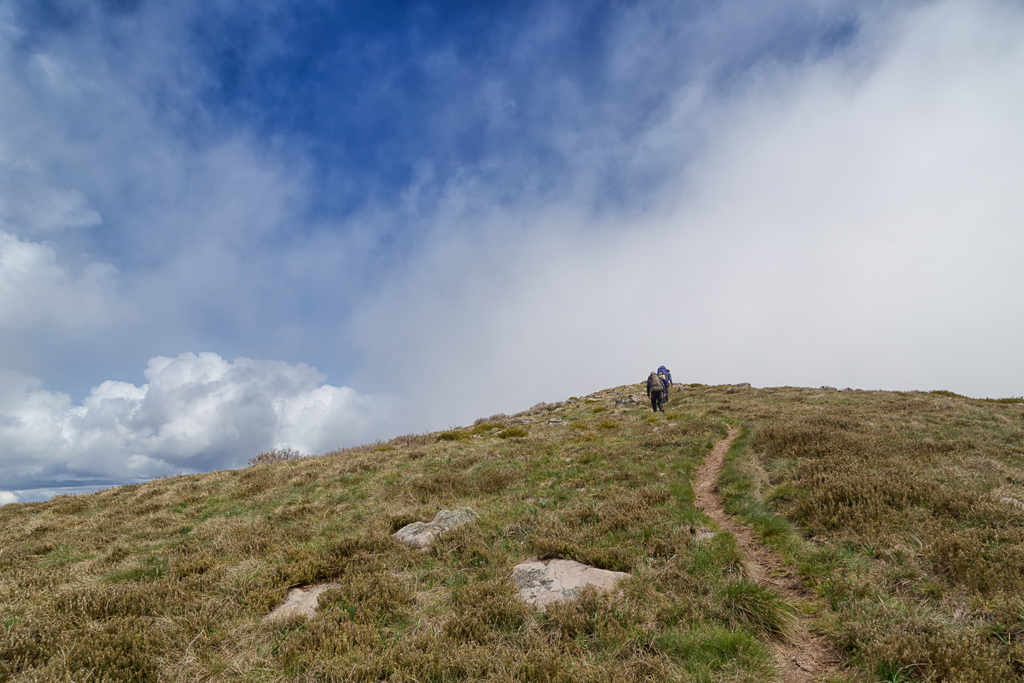 …leading to a sunbaked Mount Speculation. 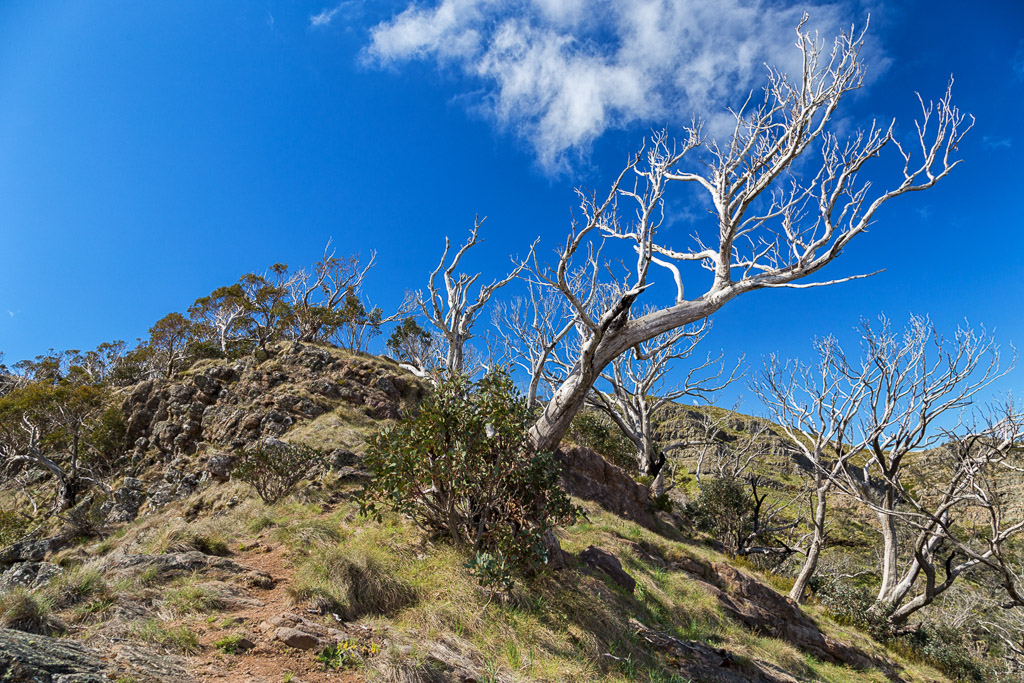 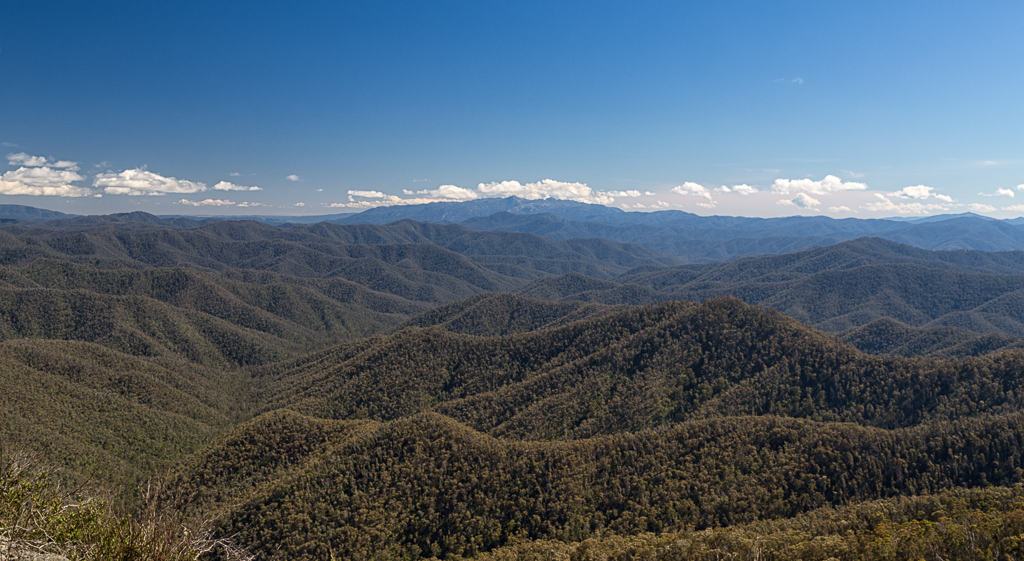 …whilst the Viking loomed in the distance for an entire day, looking suitably impenetrable. 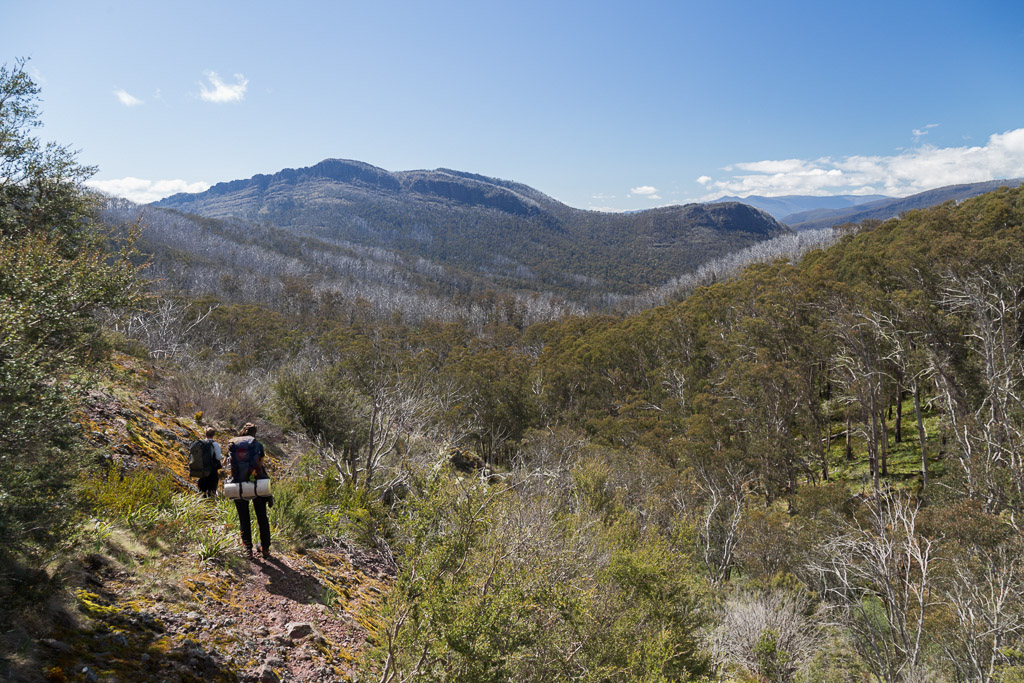 All of this may have been polarizer worthy, but it took a toll on your humble narrator who found himself looking for a lifevest to save him from drowning in a pool of sweat… 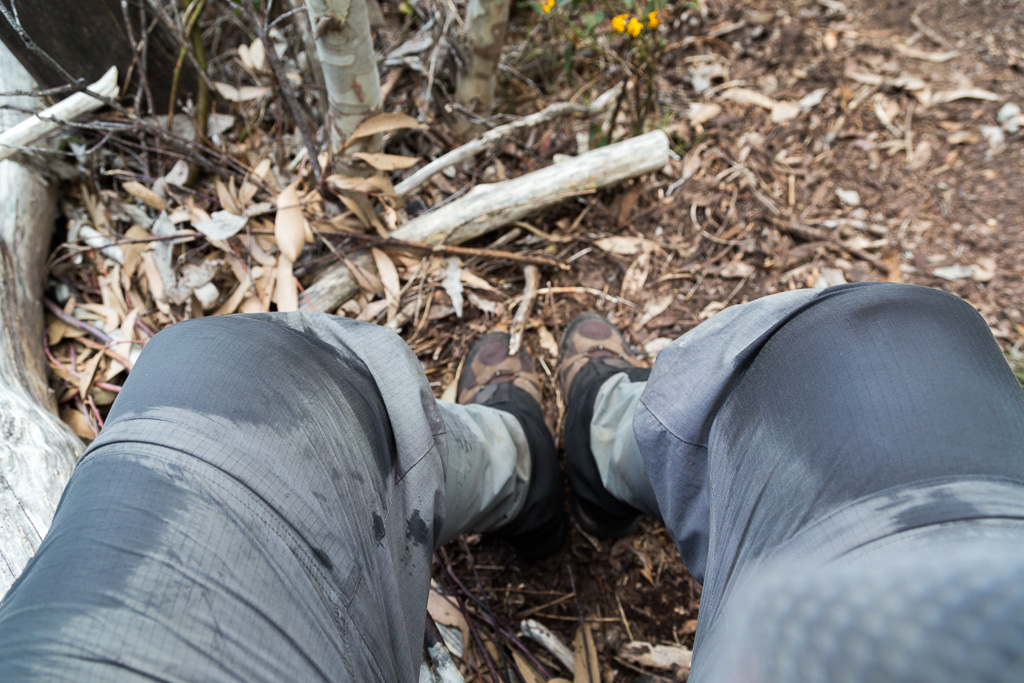 …and left me wishing surrounding thunder clouds would actually appear overhead and put me out of my misery. 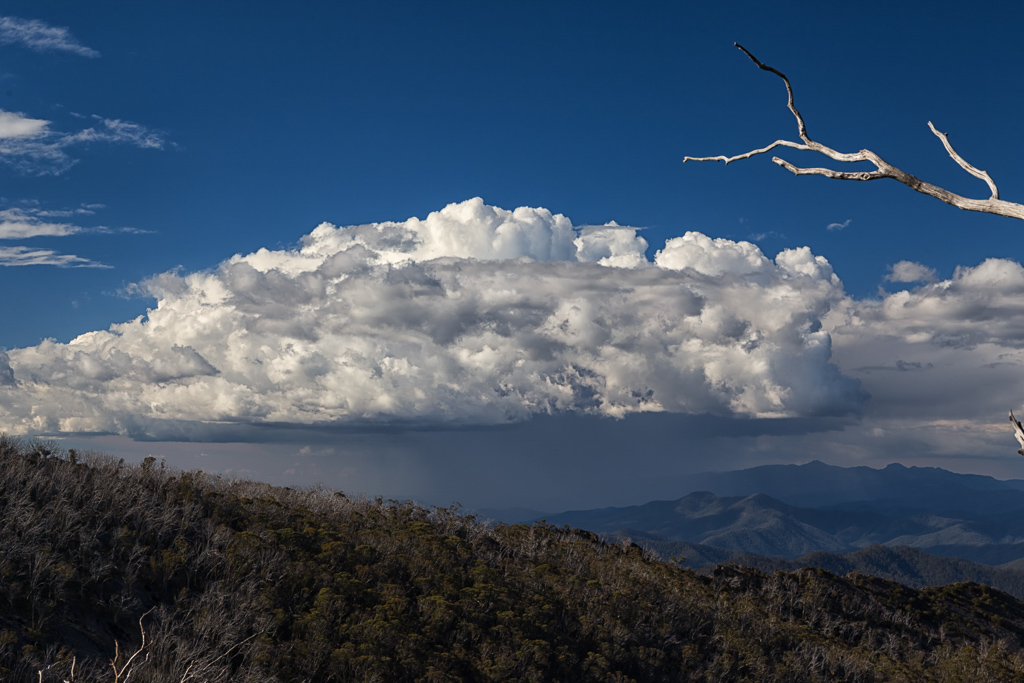 I couldn’t be so lucky, as a completely insane descent to the Wonnangatta River began… 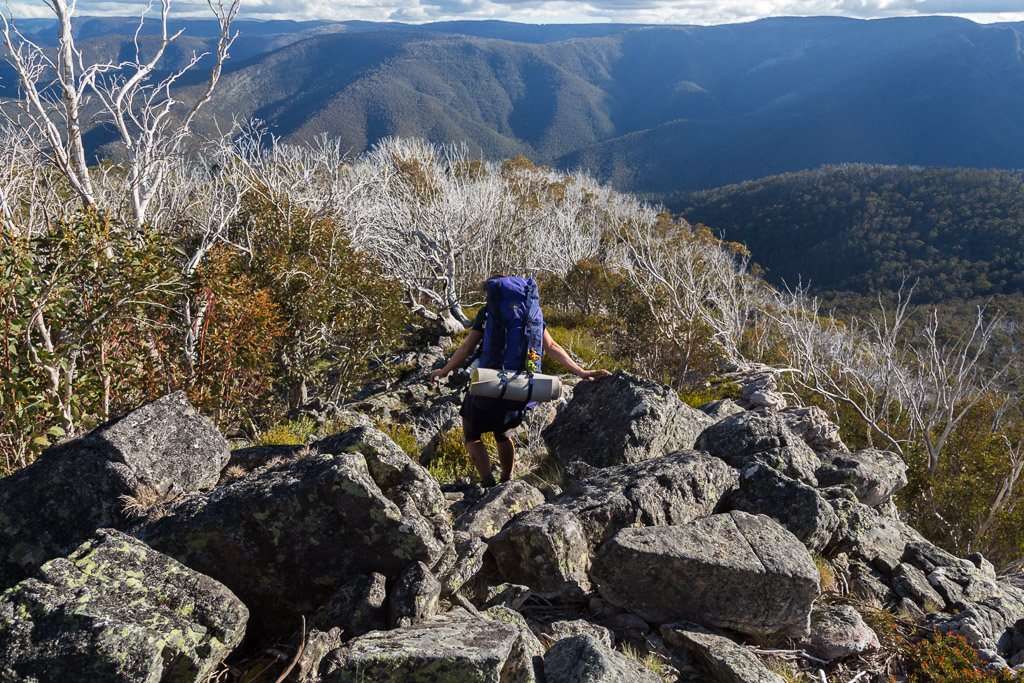 …with a conclusion at the time of….?

No, I’m not one for spoilers. Let it be said this trip had it all. Gear failures, walking via moonlight whilst geographically embarrassed, brand new swear words, tackles with things that bite (not me) and near misses with other wildlife. Three days of hell fun ended last week and for the life of me, I’ve somehow got to put it into print.

Anyway, I’ll write up each day and as I go, I’ll add a hyperlink to this page, so everything ends up being packaged together. Mind you, it’s in true Fiasco style, so it’ll take a month to finish the entire trip.

Day Two: Catherine Saddle to Wonnangatta River via the Viking.