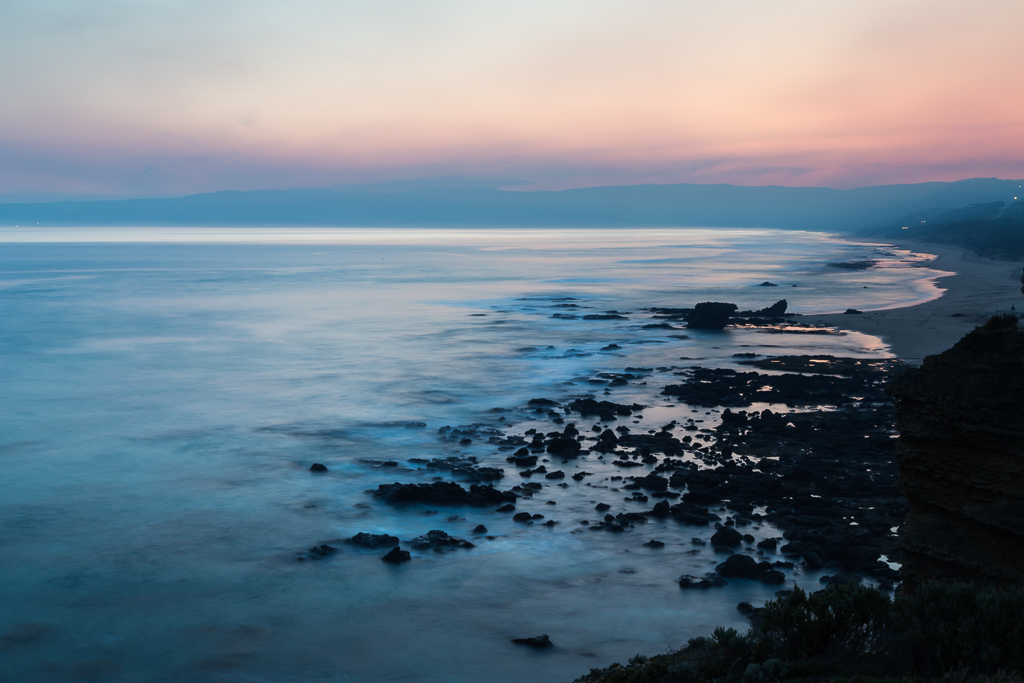 I was trawling through my, ‘unwritten walks because they hurt my brain to write about’ list and this one popped up. Currawong Falls, Aireys Inlet is an easy 11.5 km circuit walk with one obvious highlight. Naturally, Currawong Falls itself.

Sound fine? Then why would it be so hard to put a few words together? How’s this. I’ve been there a total of three times and still by the end of it all there’s something missing. Okay, the first trip doesn’t really count, as I actually walked the wrong walk. How that happened is a fiasco in itself, but I can’t include the full story here, as you’ll be dribbling from exhaustion.

Where do I start? In order to explain things properly, I’ve got to go way back to the beginning. Way back to the dawn of man in 2010. I read about this walk in both Glenn ‘Earl of Exhaustion’ Tempest and John ‘Baron of Ball Breaking’ Chapman’s books. It’s certainly well known, so I pencilled it in one day for a stroll. The only trouble is when I arrived to demolish it, I found it shut. Usually a closed walk in Victoria means a twig has fallen down on the track and I ignore the signs. This was a little bit different though.

I kid you not, but the track was closed for an eternity due to burning peat. Huh? Where is this? Russia? Apparently, some blokes went up there whilst the peat was burning and their shoes caught on fire. Yeah yeah, I know what you’re thinking, but I can assure you it wasn’t me with the flaming feet. Luckily I did come across this photo though. It sort of sums up what would have been a fairly interesting walk.

Even I didn’t walk in the flames that day, so I sat off and waited for it to reopen. Lo and behold, about a decade later it did. So, what you’re going to get in this post is the combo photos of two trips. Once in May during the eternally hot autumn this year and a second trip during a wettish spring. Oh yeah, forget about the first non-event, as all I saw was the sign at the start and headed off in a different direction.

On the first trip I was cruising down to Aireys Inlet when I noticed something in the sky. Smoke. Lots of it, and it seemed suspiciously close to the area I was headed. As I got closer I could even smell it quite clearly. At first I thought it was coming from my hand, as I performed rapid gear changes in my car, but then I realised it wasn’t me at all.

Mm… Time for a little homework. I opened up the CFA app on the phone whilst driving and steered with my chin until I found out there was burning off taking place. How close to Aireys Inlet was this? How about only 5 km away! Surely it was too close to the peat?! The peat that refused to go out…? I sensed a fiasco of the highest order coming up and imagined this was what I’d look like halfway through the walk… 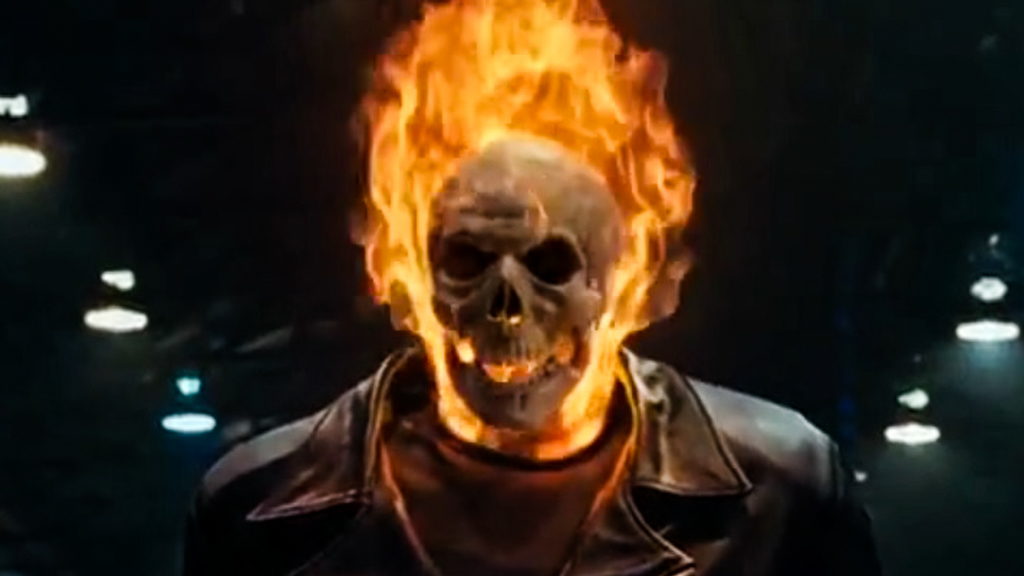 Don’t laugh. My head’s on fire.

I thought the walk may be closed as a result, but there were no signs at the start, so I headed off. A problem quickly came up though. The area was covered in smoke and I found myself coughing at times like a complete bastard. During an uphill start it felt like I’d teleported back to the Industrial Revolution and been stricken with consumption.

The catch to this is I’ve been on this walk twice, so now I’ll show you a few pictures where there’s no smoke at all. That’s the sort of zany bloke I am. My first point of interest was a rocky outcrop, which made a perfect place to sit down and recuperate from the world’s smallest climb. Actually, this spot was my favourite area of the entire walk… 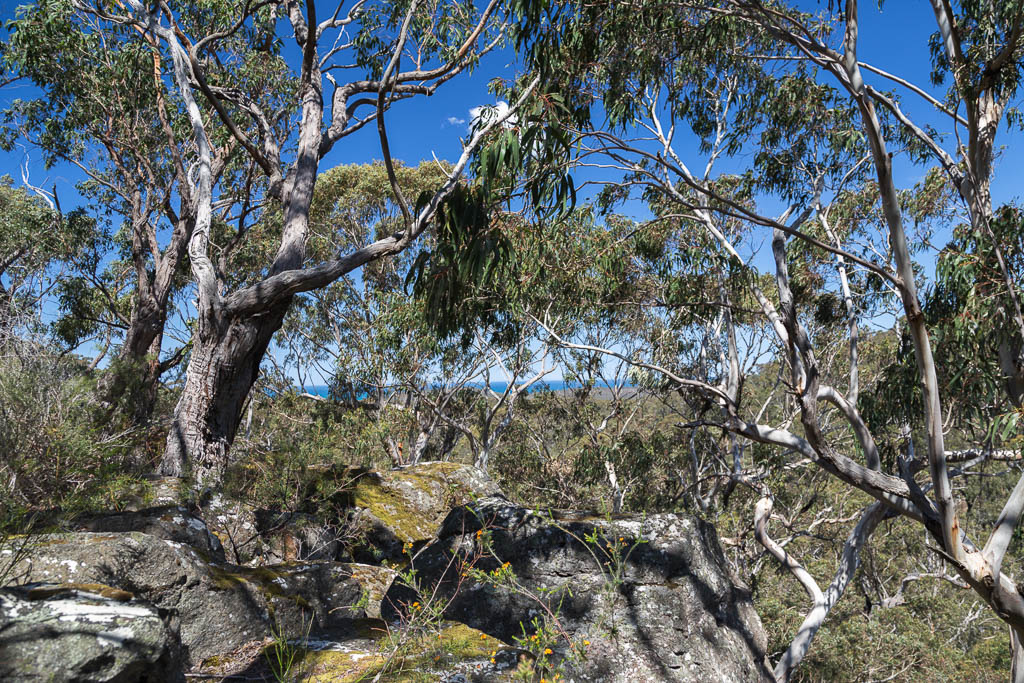 It’s quite a drop and I did take plenty of photos, but they didn’t show what it really looks like. You’ll just have to go up there yourself and have a look. 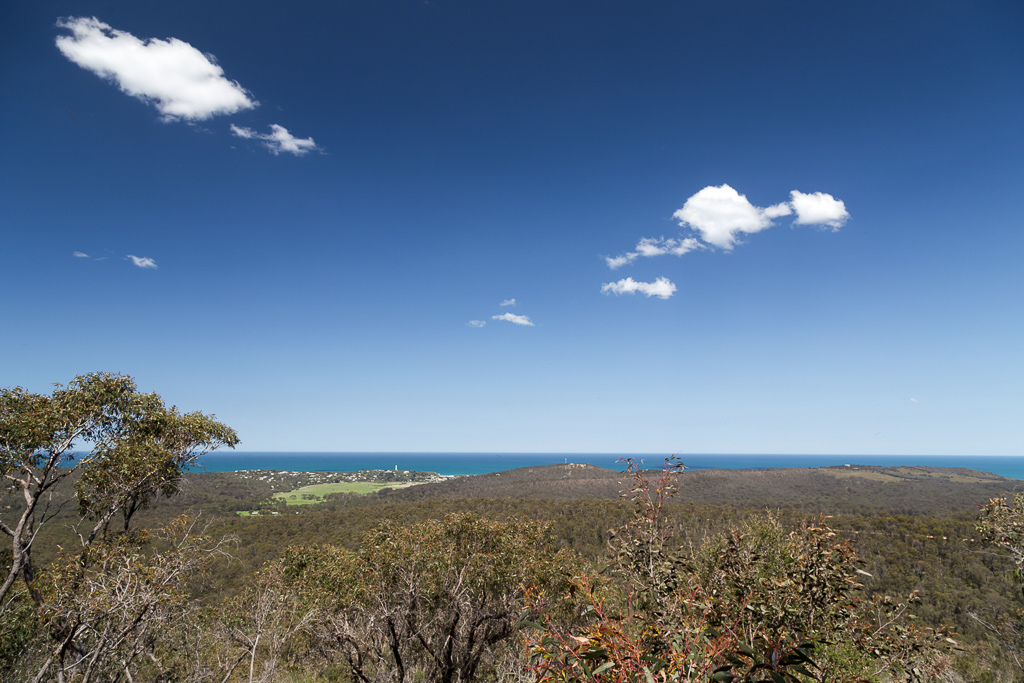 …whilst the track is lined with dozens of grass trees. Who doesn’t like a grass tree…? 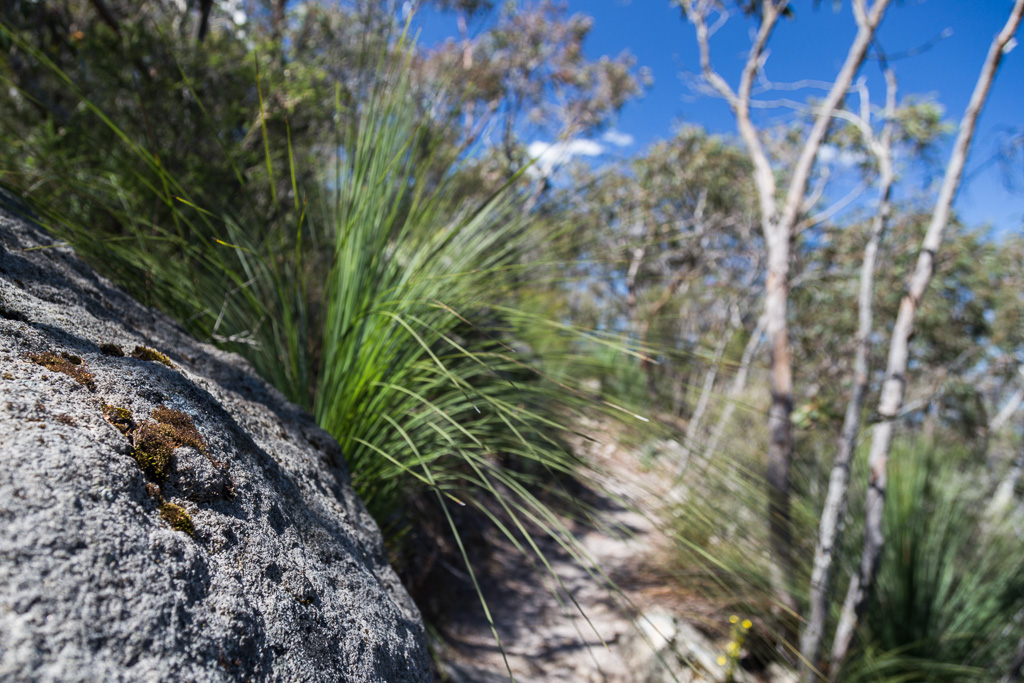 There’s plenty of evidence of fire, but I don’t know when it occurred. A burn off perhaps? Was it back in the burning peat days? There were carpets of flowers to offset the blackened tree trunks. 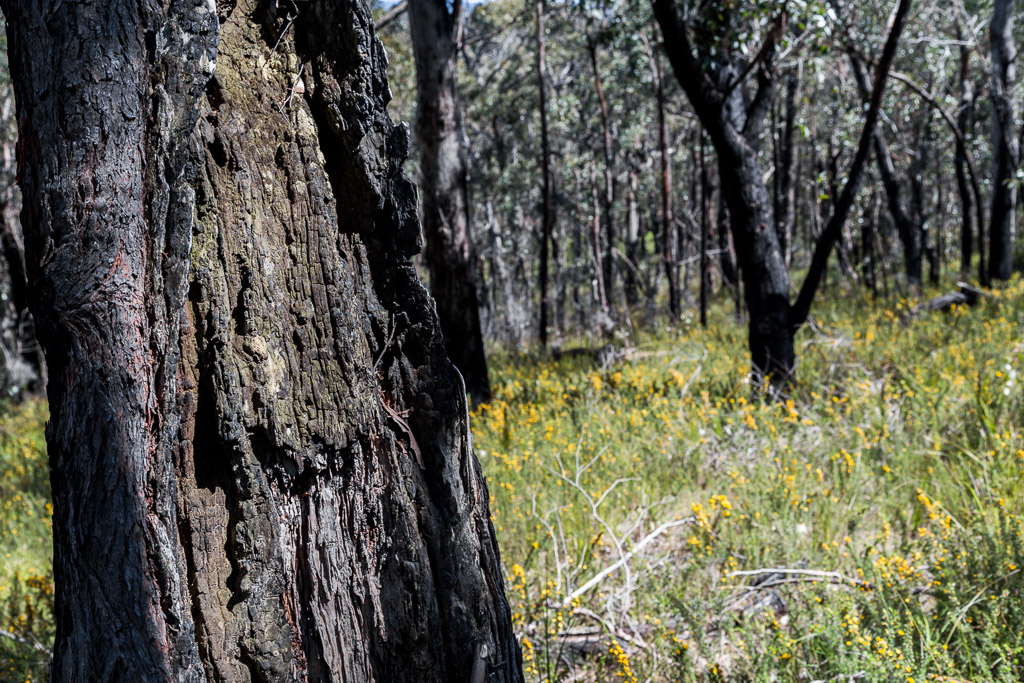 The comfortable uphill walking continues until reaching a trig point, which signifies the completion of climbing for the day. There’s even some signage, just in case you’ve been asleep at the wheel and had no idea what a trig point is. Actually, why did they bother spending money creating a sign in the first place? Does it really matter? It’s almost as if the sign has collapsed on its own volition due to boredom… 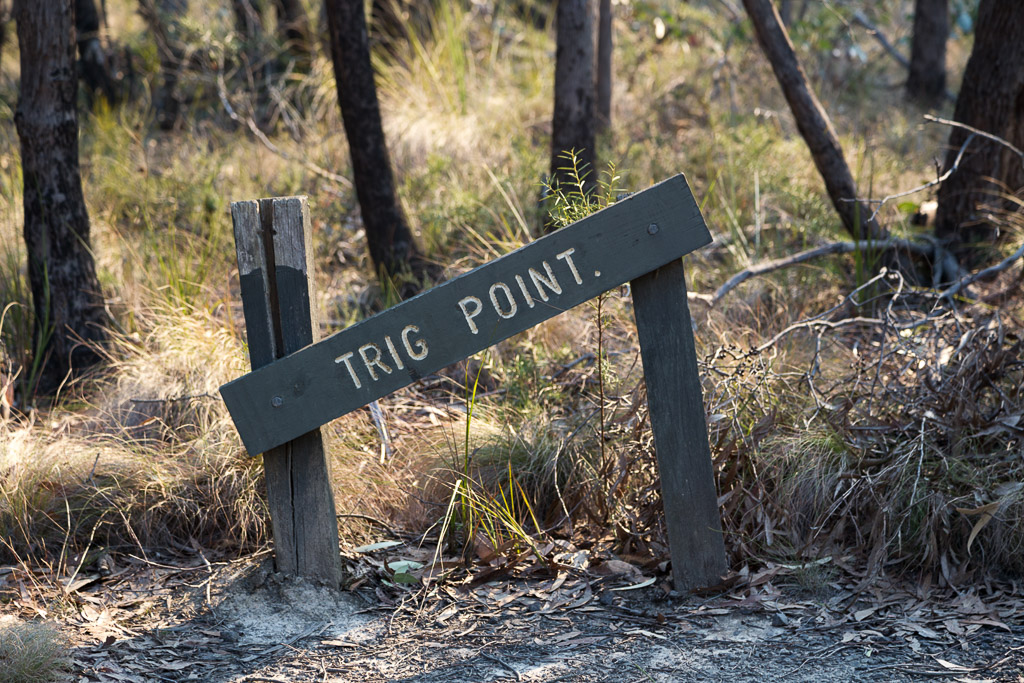 Down for the count

Fasten your seatbelts. Here’s what the sign is identifying… 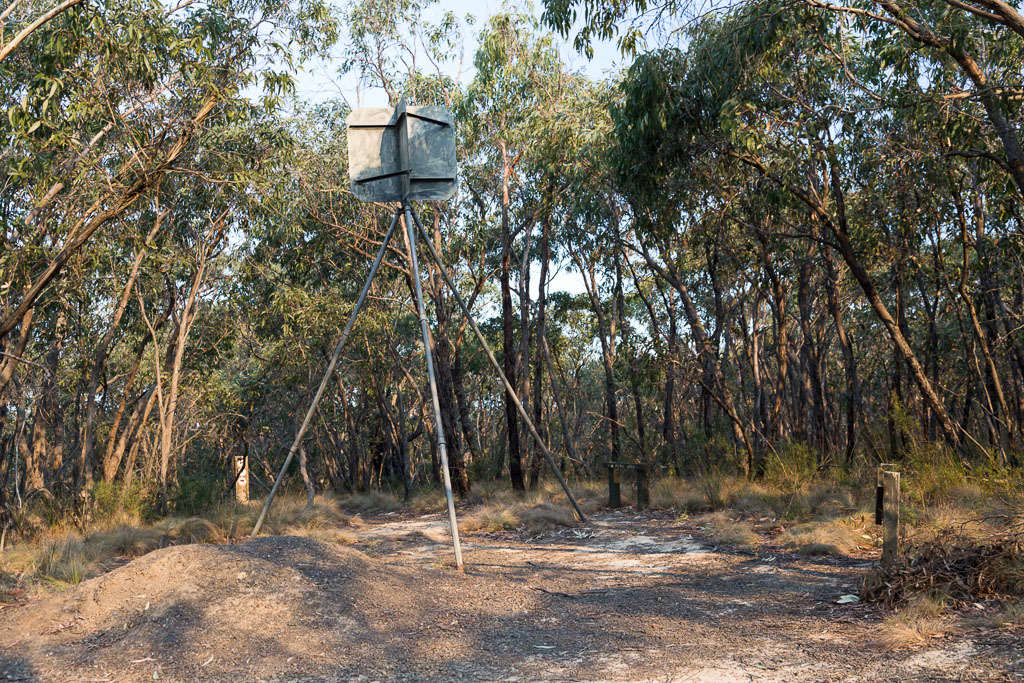 Now, the attentive reader may notice something about the photo above. See the yellow glow? No, it wasn’t at sunset. This was part of the ‘sun through the smoke haze trick’ from my first walk on that balmy day. Firstly, I’ve no idea why I was wearing boots and strides. I should have been in runners and shorts, as the track doesn’t warrant any heavy duty gear. Again I was struck with my nemesis. Sweating knee caps. My knees can sweat with the best of them. I should enter some leg sweating contests, as I’m sure I’ll have a chance, but usually I’m too busy trying to retain my World Nude Combat Chess Champion (WNCCC) trophy. I’m a very busy man. 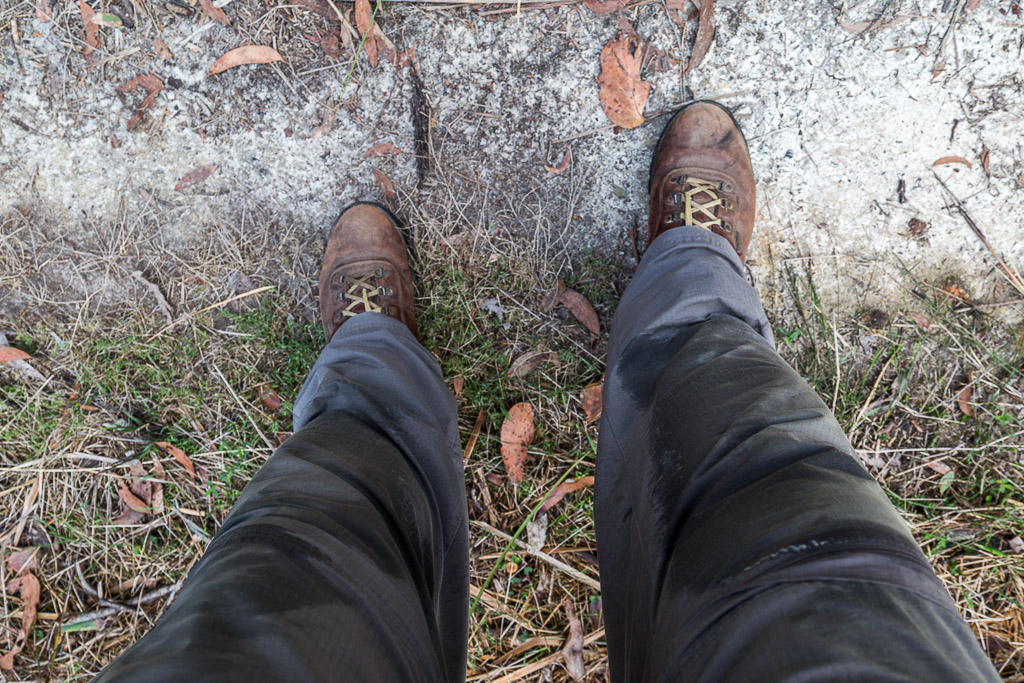 Go forth and sweat young man

Turn the camera around from the trig point photo and an easy downhill ramble starts. This is how it looked on my recent trip… 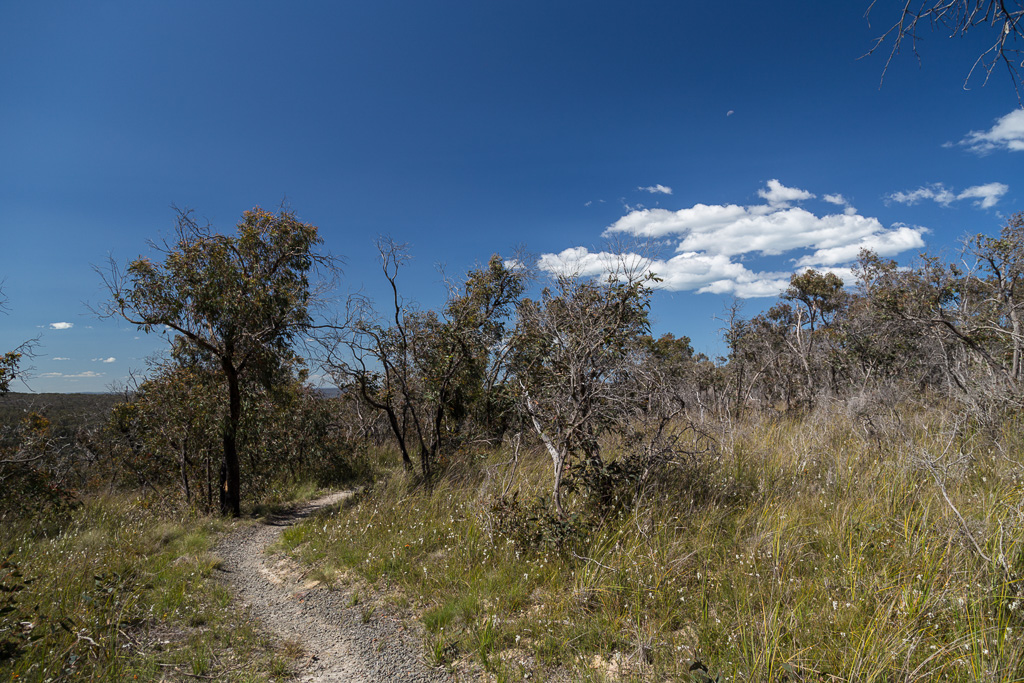 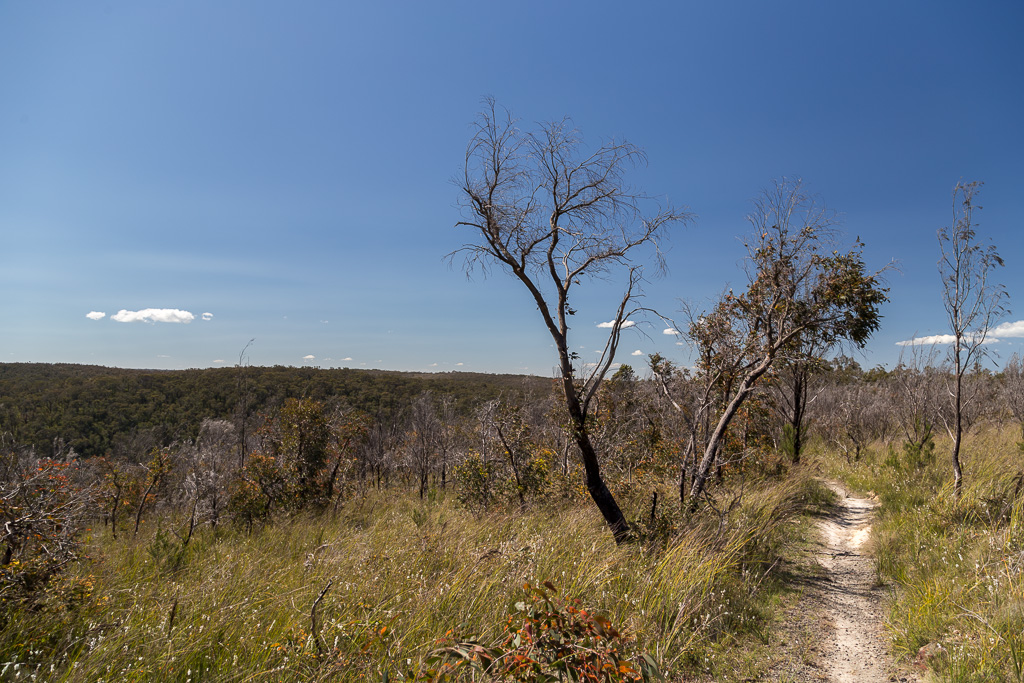 …unlike the May trip, when it was slightly more apocalyptic and lung choking. 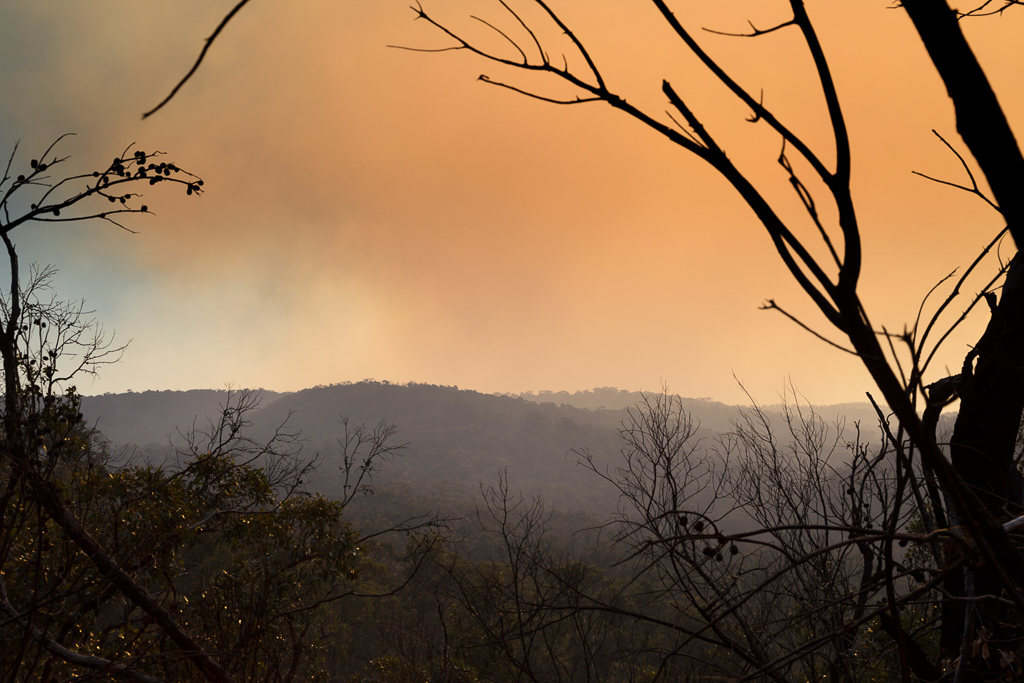 You better have a cigarette to fix that cough.

The smoke on that occasion continued to bathe the area in a weird glow. 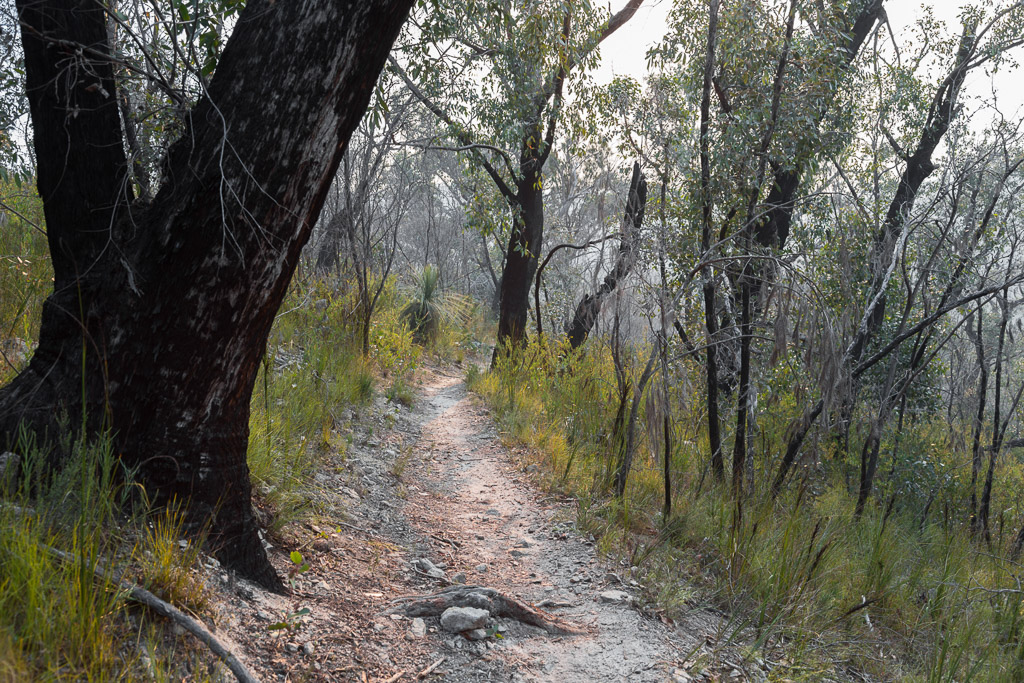 Now, this is where my problems started. I assumed I’d know where the actual Currawong Falls were, as they’d be obvious. You know. Water that’s falling? Shouldn’t be too hard? Maybe, but as I kept walking I didn’t see any sign of a waterfall and I began scratching my head. Surely I hadn’t missed it? In the end I began taking photos of anything which resembled a drop, in the off-chance it was the actual waterfall. The next picture shows a likely suspect. A fence and lookout spot had been built, as if to indicate, ‘stop here and look’. So, I took some pictures, but on my first trip it was dry as a chip. 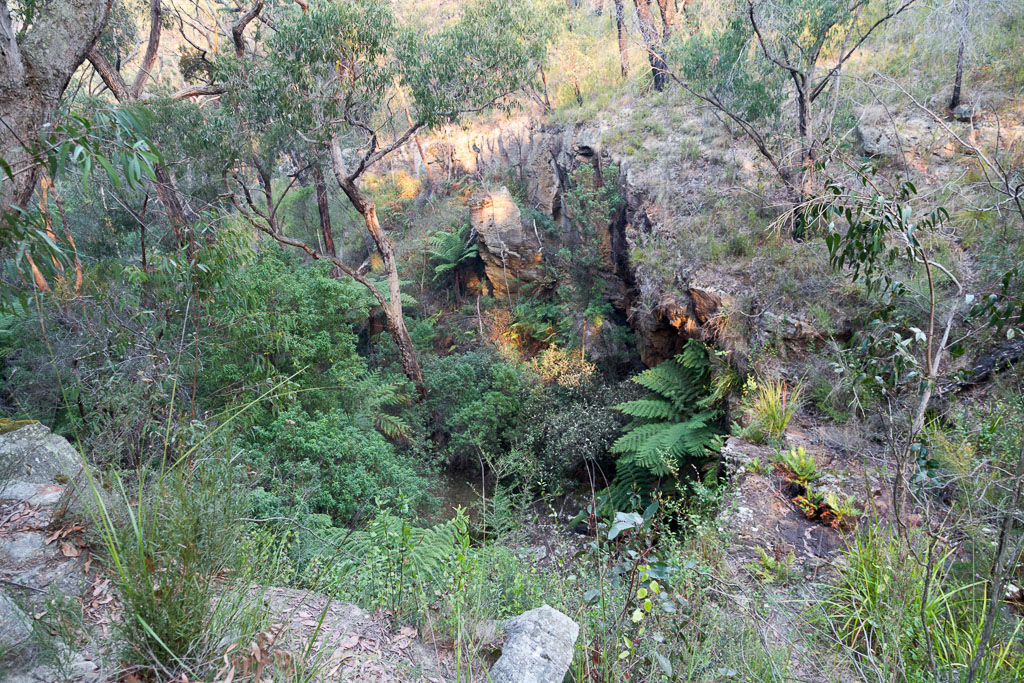 Is that it? The reason I went back months later in spring, is I surmised with recent rainfall, the waterfall would be up and running, plus most of all, obvious. Umm… guess what? On the second tilt, I stopped at the same point and this is the best I could do regarding the ‘waterfall’. 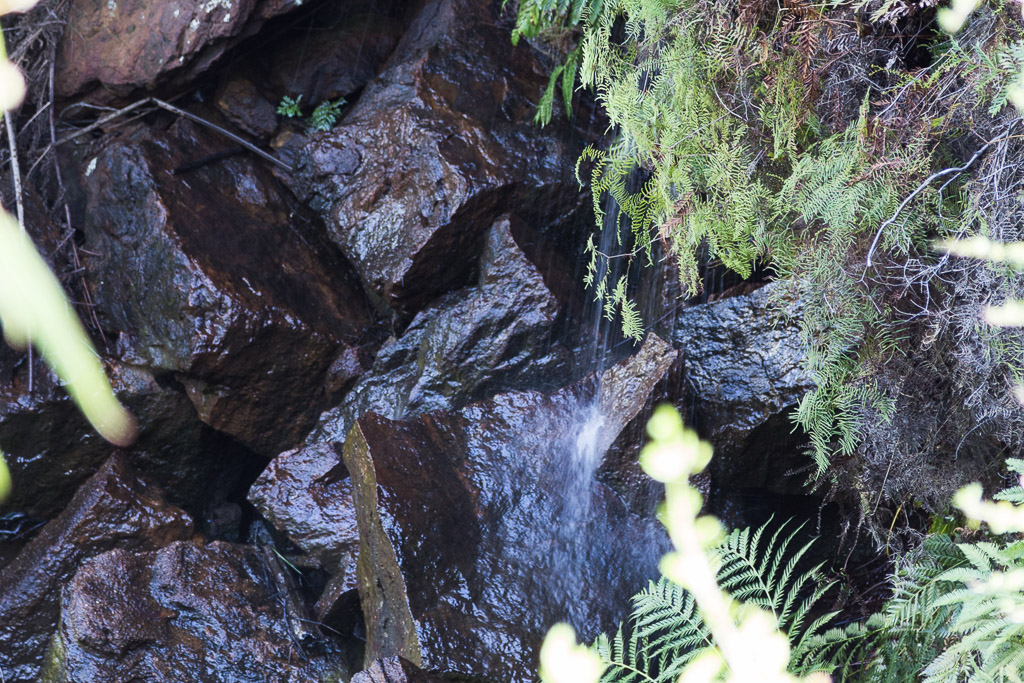 That photo is a super, zoomed in shot to show you there was actual water, but the only problem was I’ve had leakier taps at home than the water falling on this occasion. Damn. Then again, was this the actual waterfall? I’ve no idea, so I moved on.

The grass trees kept coming and at a distance this one looked like someone bending over to take a photograph. Yeah okay, you have to put some imagination into it, but maybe it’s better to dim the lights, slap yourself across the face a number of times, squint and then do a handstand. Now look at the picture. It looks like a photographer with a very large hairdo, doesn’t it? 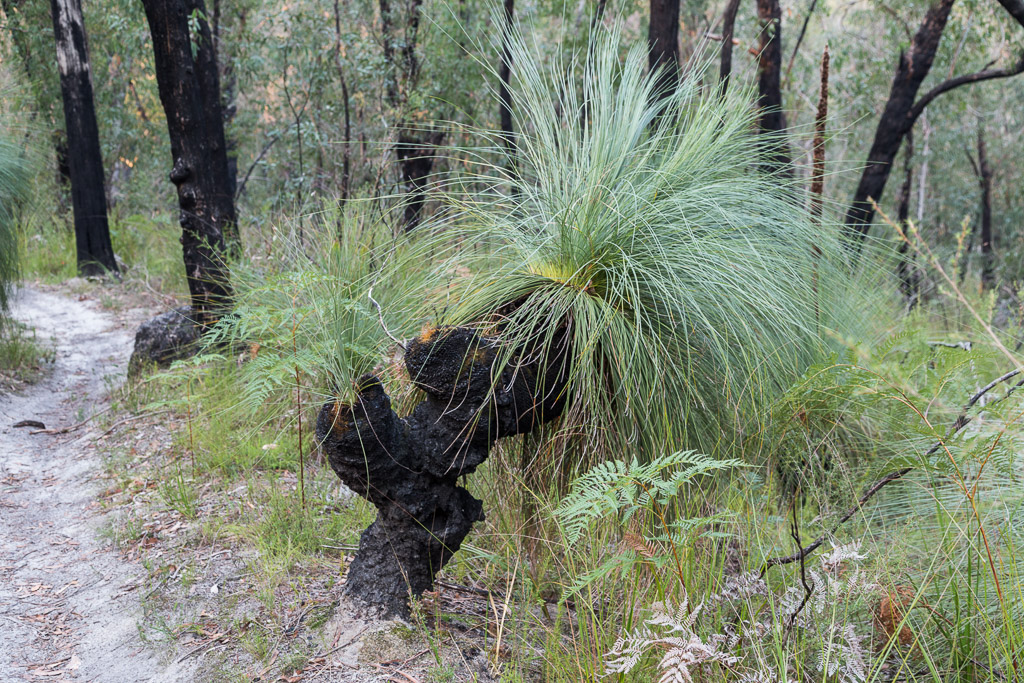 The track continued descending. Actually, I’ve no idea how this place worked, as I spent about three kilometres climbing casually at the start and the next eight walking downhill to end up at my car. How can there be so much downhill stuff? Anyway, I found myself in a ferny gully and there was another suspiciously dry, rock wall, but being above a creek, I surmised, is this the waterfall?! 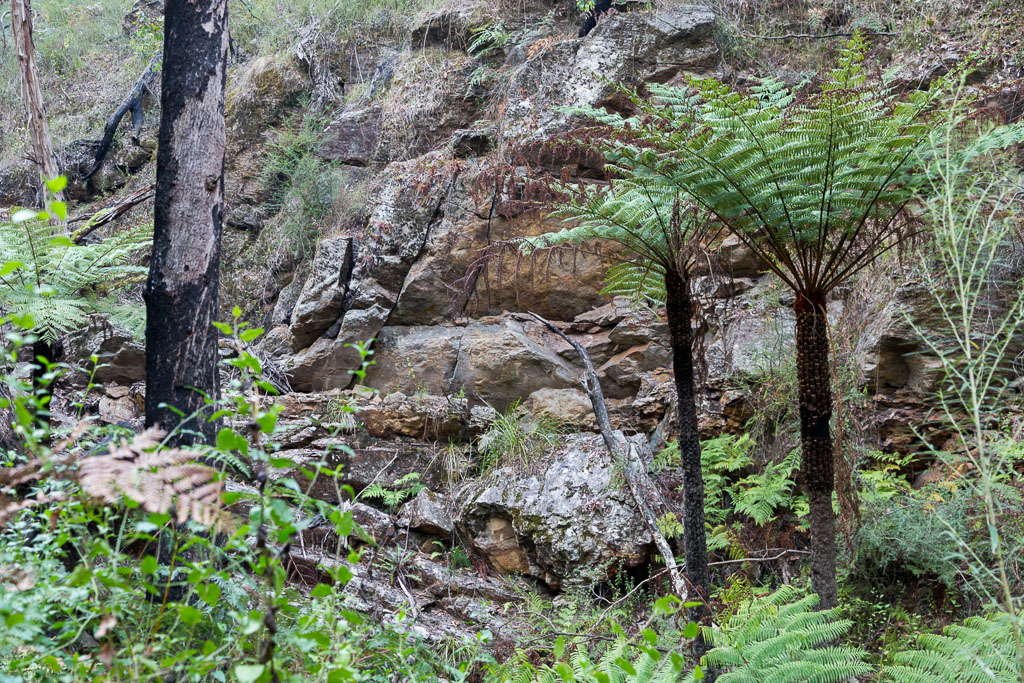 Nooo… Surely that’s not it and on my second spring trip, it was as dry as it was the first time. Mm… Anyway, there was some nice walking through towering trees and ferns with the smoke glow still visible… 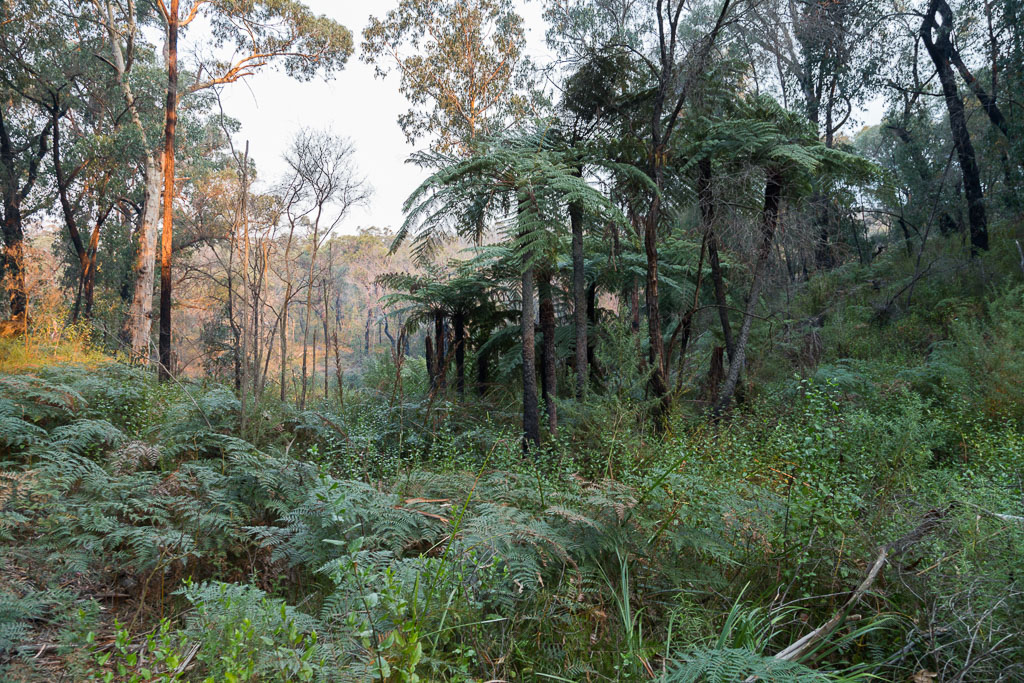 …compared to the vivid blue skies of my recent trip. 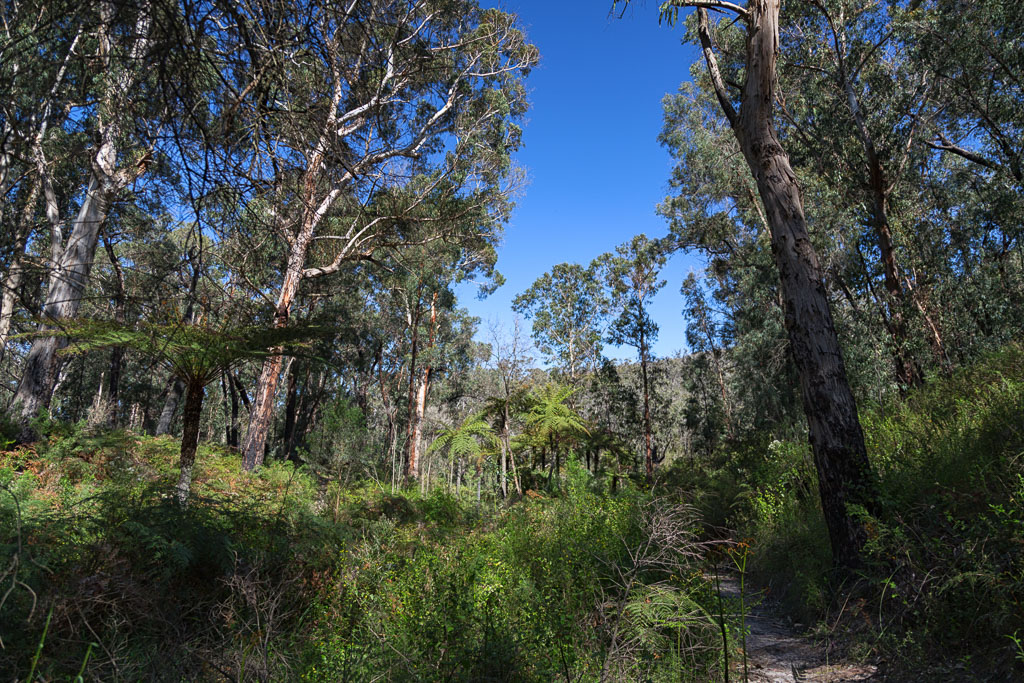 Oh yeah, I forgot. There’s one reason the track is so wide and well maintained. It’s shared with mountain bikes. I didn’t see any on my two trips (actually I didn’t see anyone at all), but there are warning signs on the corners… 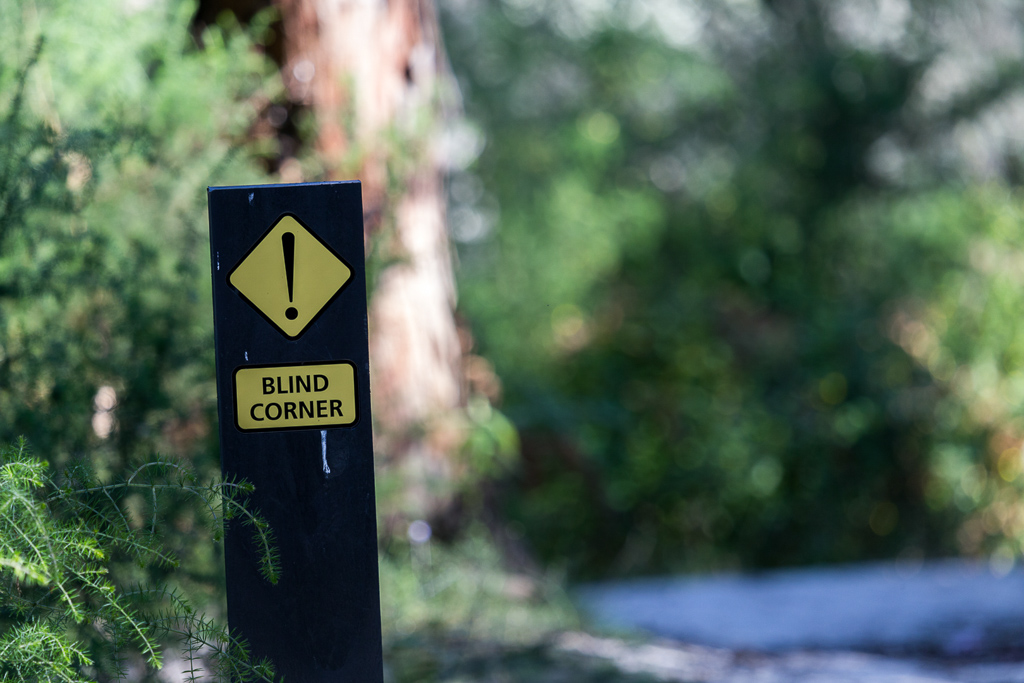 I certainly wouldn’t want to be strolling along humming ‘Turbo Lover’ by Judas Priest and find a bike flying around a corner head on. Having some handlebars driven into the testicles would certainly be disappointing.

The glow continued on the smoky visit… 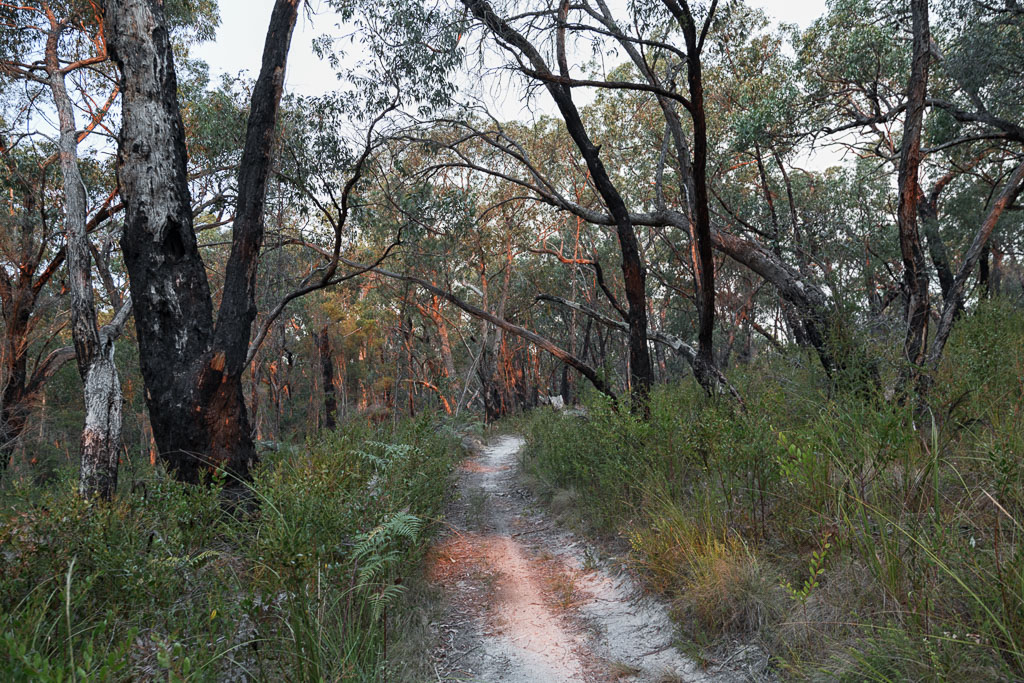 …and as I entered another fern lined section a particularly excited fantail kept me company. This may have been the hardest bird to photograph, as it did not sit still for a second. It’s a little blurry, but I couldn’t do any better at the time. 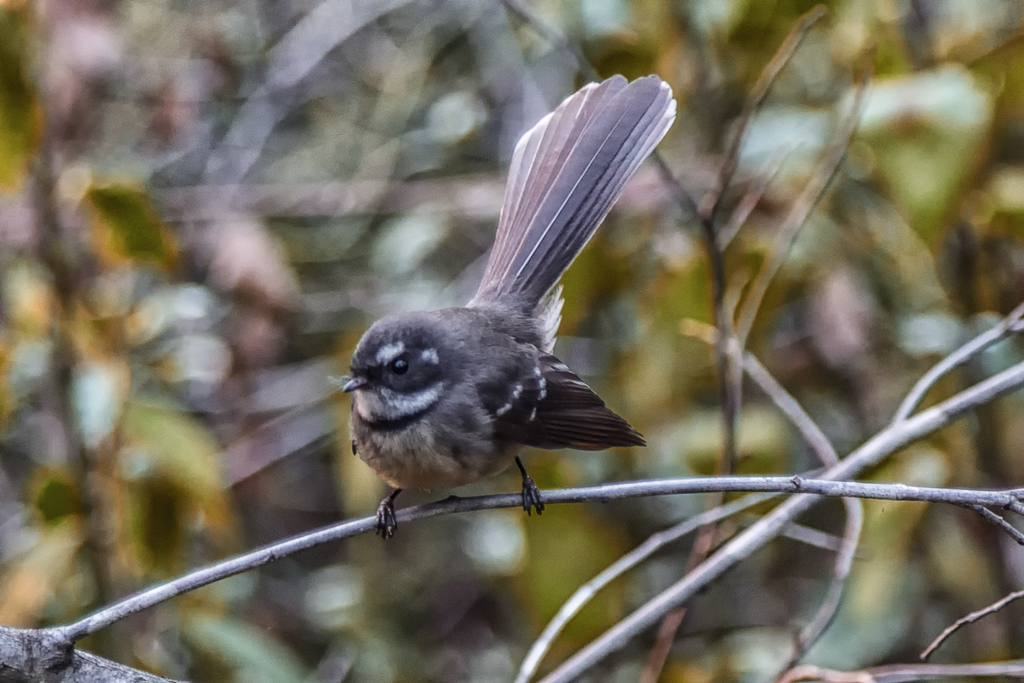 There was a final piece of winding boardwalk… 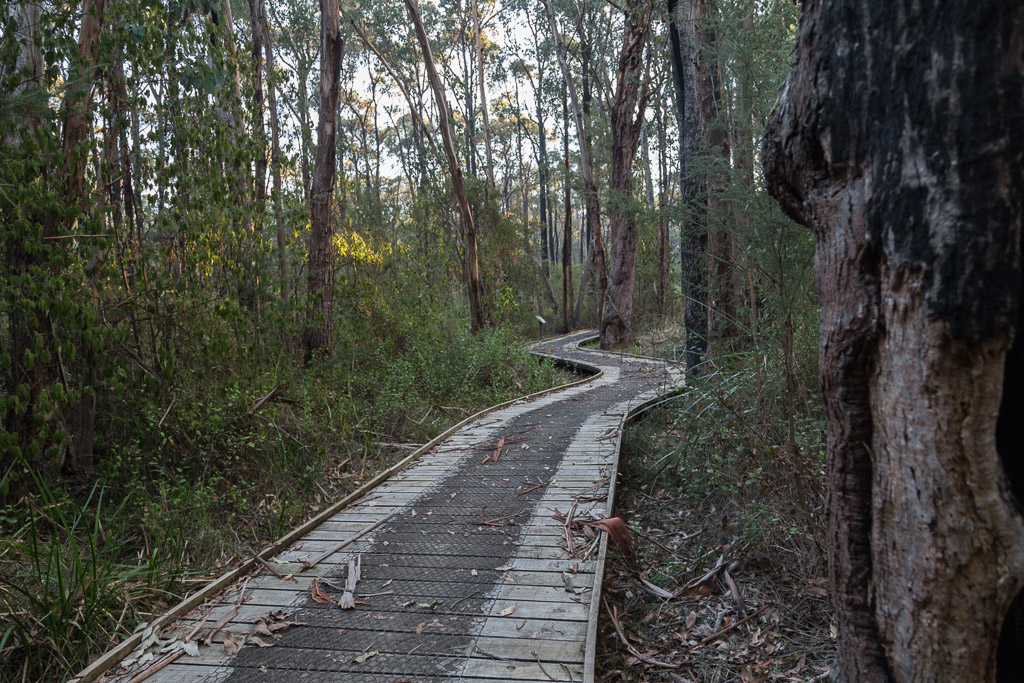 …and I was done. Well, what can I say? On both occasions I loved the walk, but sorry, I’m not coming back to look for this waterfall again. I reckon if it’s raining hard enough to see an old man collecting animals, then that’s the only time to go looking for the falls. Otherwise most of the time it’s dry. Talk about not fitting its job description? It’s sort of like going to see Judas Priest, but instead of Rob Halford, all you get is a priest instead. Could there be anything worse?

So, my readers from around the Milky Way, that’s it. If you’re a waterfall nut, you’re better off heading a bit further down the coast to Lorne, where water is pumping all year round. If I lived near Aireys Inlet, this would be a nice stroll to do after work, but I’m way too far away.Also, there’s so many other walks to do and not enough time to get them done. Especially now, after I’ve lost a few years from my life due to breathing carcinogenic smoke for an entire afternoon.

Is there anything else? You know there is. I’ve already written a post about Split Point Lighthouse and how whenever I go near Aireys Inlet I trudge up the hill to have a look. The smokey day was no exception. The lighthouse was certainly bathed in a glow… 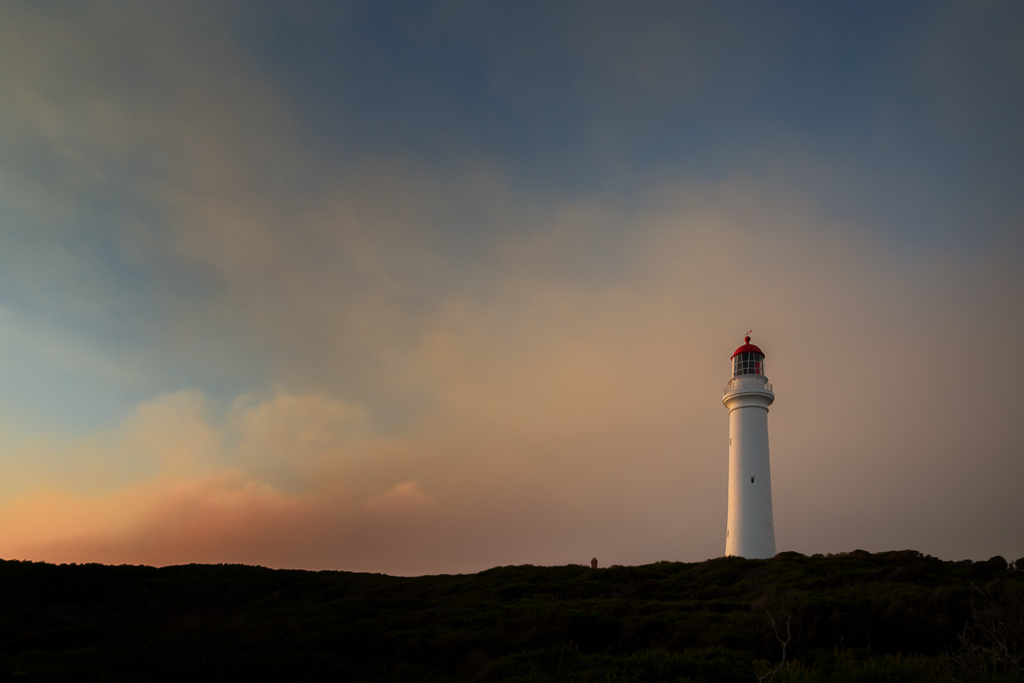 …and during sunset I wasn’t alone, as a friendly magpie kept me company as we both watched the light fading. 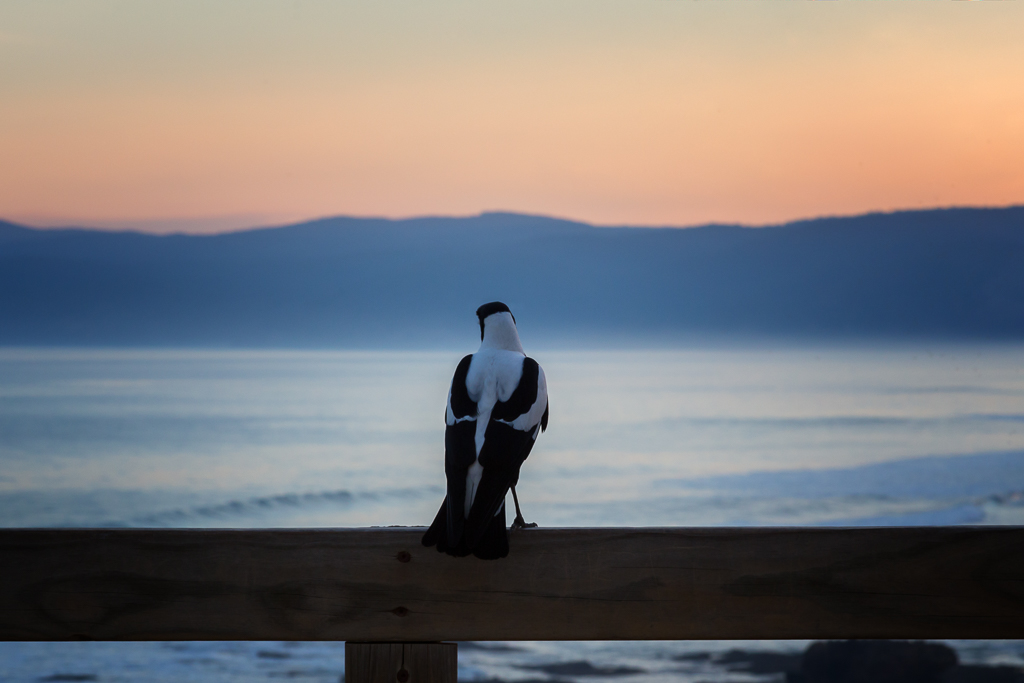