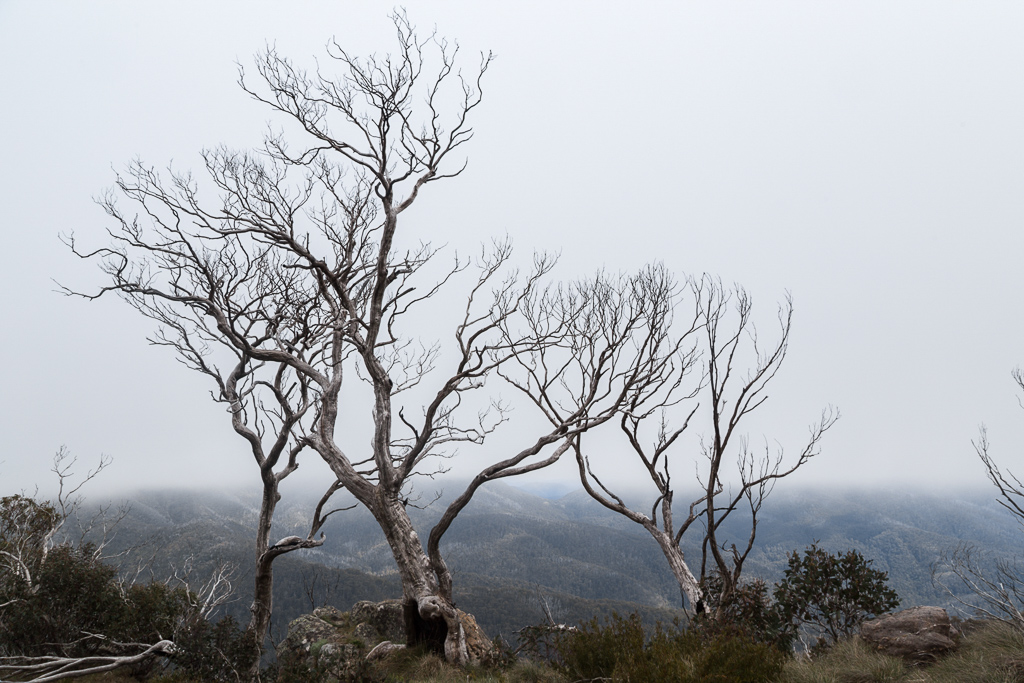 Here we go then. The first entry for my three day walk of the Viking Circuit in Victoria’s Alpine National Park. The attentive reader will know I’m not the fastest in writing up a trip, but I’ll attempt to pump out all the action within the next three weeks. As they say in the classics, ‘Strike me across the face with an iron, as I’m feeling hot’.

Ah, but if you’ve come to this particular post looking for pain, misery, sweat and profane language, then I’m sorry to say you’ve come to the wrong place (so far). I did warn you in the previous entry that every detail of this walk will be covered, even if it’s the world’s shortest stroll. So, somehow I’ve got to create a write-up of a five kilometre walk. Yes, believe it or not, but this entire post will describe the stroll from Howitt Plains car park to Macalister Springs, Alpine National Park. The location, which is the launching pad for many an alpine walk.

You know what though? There’s a bit in this, as I spent about two weeks planning where I was about to start this infernal hike. So, top up your pipe, adjust your cravat, smokers jacket and suspenders, as I tell you about the head scratching groundwork stage.

The seasoned alpine traveller will know of the Howitt Plains car park. Howitt Road, which leads to it is essentially a free ride to the top of the hills. Sitting around 1600 metres, it’s certainly the place to get to in order to avoid a long slog from the valleys below. The only trouble is this dirt road is known as a bit of a nemesis for 2WD cars and my low slung Mazda fits this category. The road is closed over winter and only reopened at the start of November. Was it in such a state my undercarriage would be ripped out and I’d be left looking like something out of the Flintstones?

As per usual, there’s bugger all online about this, so a couple of calls to Parks Victoria were the solution. After speaking to the ranger at Heyfield, I was assured I could get there. “As long as it didn’t rain, otherwise it can get a bit boggy”. Mm… What are the chances of rain in the alpine area? Well, it was a slight concern, considering the week I was going was absolutely wet and freezing. At sea level.

I lay on my bed looking at myself in the mirror on the ceiling for quite some time contemplating whether I should risk it. In the end it was the only solution. I couldn’t travel up with MK and the General, as I knew with their fitness level they’d leave me for dead and would probably spend a day at the finish waiting for my blubbering body to arrive. I needed my own transport, so risking my sump was the only way to go.

I headed out on a Friday with the intention of meeting my walking companions in the evening. Unfortunately for them, they had to work, so wouldn’t be arriving until after dark. Licola is the last port of call before hitting the gravel of firstly Tamboritha Road and then Howitt Road. I’m not a fan of driving at the best of times and I found this drive to particularly painful. A close call with approximately 1000 sheep and stuck behind a horse float for what seemed like a century was the cause of some of my angst.

Eventually I reached Licola to find I had no mobile reception. Huh? Fair enough. Then I was on the rutted gravel of Tamboritha Road. A bit of sideways rally action and I made the turn at Fatty Arbuckle Junction onto Howitt Road. You know what? You’ve put up with some slabs of hot air text, so it’s time for a photo or two. Guess what? I needn’t have worried, as Howitt Road was like a freeway… 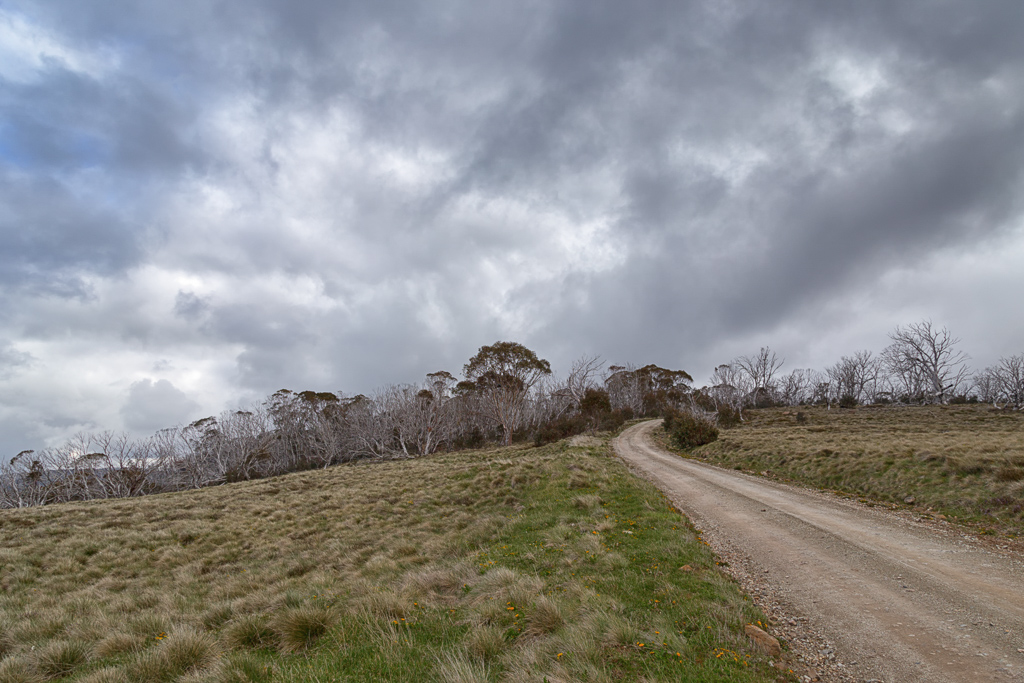 There was the odd pothole, which may have swallowed my car, but with a flick of the wrist on the wheel, brought on by years of flicking Smarties into my mouth, I avoided de-sumping the trusty Mazda. I must say, once some height is gained, there are some nice views on the way up. 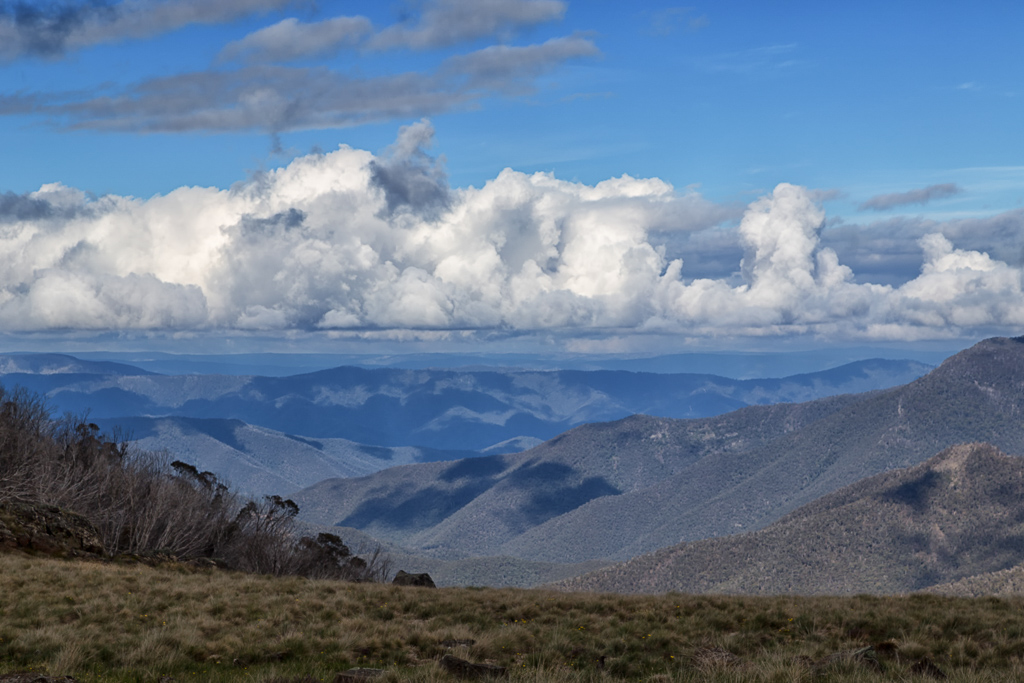 It was a pretty casual cruise with barely any sign of life. I did get overtaken by a motorbike at one stage, which is fine, but after about 15 minutes he overtook me again. I’m not sure what happened there? I imagined time and space had altered, with me actually on a huge, earth shaped hamster wheel.

Although it was a nice enough to drive on, it still took me a couple of hours from Licola to get to the Howitt Plains car park. By now it was late afternoon. I leapt out of my car, limbered up with some high-kicks and put the pack together. How’s this for a crap system? I generally have the pack completely empty when I go away and tend to hurl everything I think I’ll need into the boot. Upon arrival I then pack from scratch and it’s always a little thrilling, as I wonder what I’ve left behind.

This system is problematic, but always entertaining. Most times it works out fine, although there have been some notable absentees of equipment over the years. How about no socks? That was a good one. Forgetting my Personal Locator Beacon (PLB). Fairly common. The best of all though was when I arrived at a day walk and realised I’d left the pack at home. I had what I needed, but no pack. I did have green shopping bags, so I considered using those, but it would have been awkward. Especially when carrying water. So instead, I gave up walking and went to the cafe instead. Always an option.

On this occasion I was diligently packing when a car arrived with a bunch of blokes. They were older than me, but were wiry and fit looking. This played on my mind as I scanned my one ab physique and asked myself, “What the hell am I doing up here?” After a quick chat, I soon learned they were also doing the Viking Circuit, but their aim was four days, not three. They were fit, but were taking four days? None of this was helping my mental condition.

Eventually, after a decade of pondering, I was packed and racing down the track after filling in the nearby logbook. By now it was well and truly early evening, as I began the casual stroll. There were plenty of things to see on this short jaunt. The odd fallen tree… 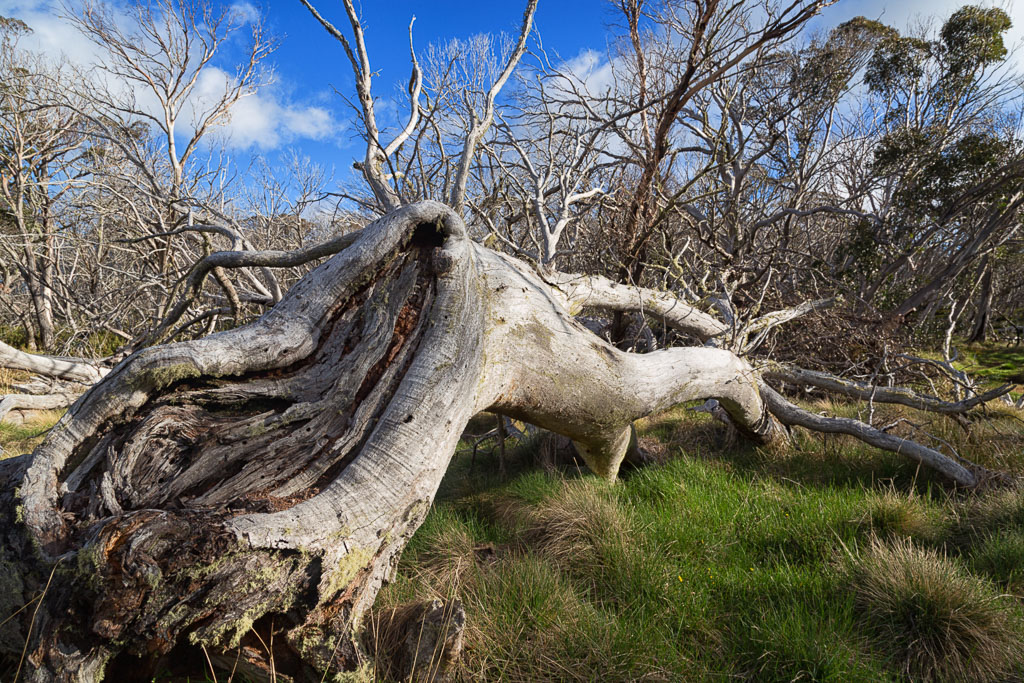 …and rows of Snow Gums lining the track. 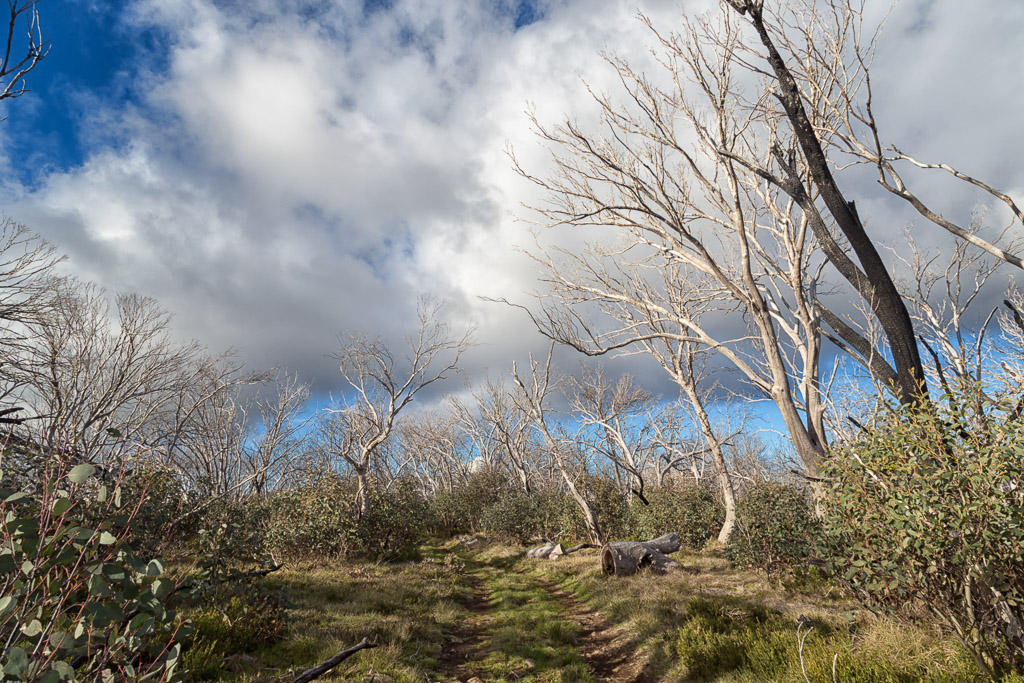 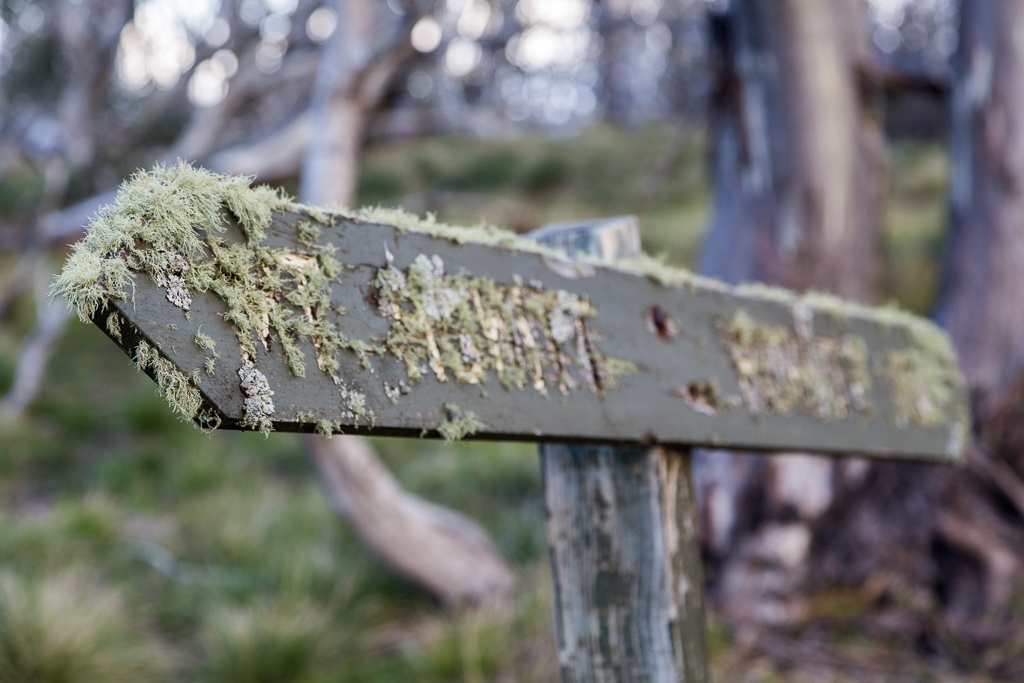 …before reaching a junction. Take the long way to Macalister Springs or the short? Seeing how the long way was estimated to only take an extra 10 minutes, I decided to give the former a go.

The ‘long’ way passed closer to some cliffs and there were some nice views through the trees. Ominously the Viking was bathed in a golden glow from the setting sun. Frankly, it didn’t look pleasant at all. Impressive, yes. A barrel of laughs, no… 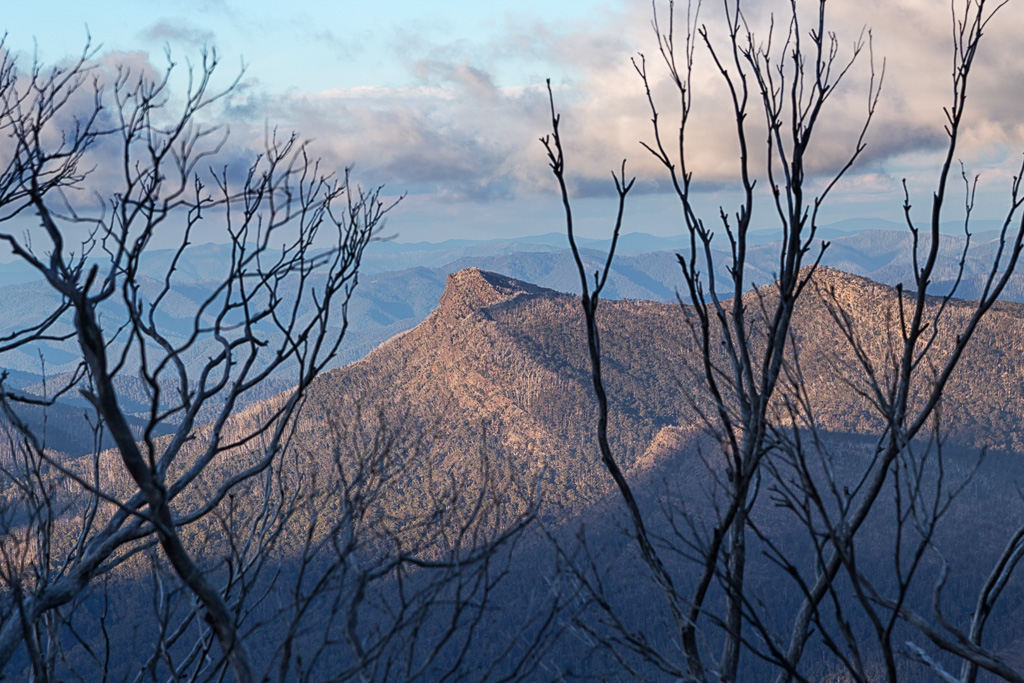 …whilst the Crosscut Saw and Mount Speculation were lit by the fading light. 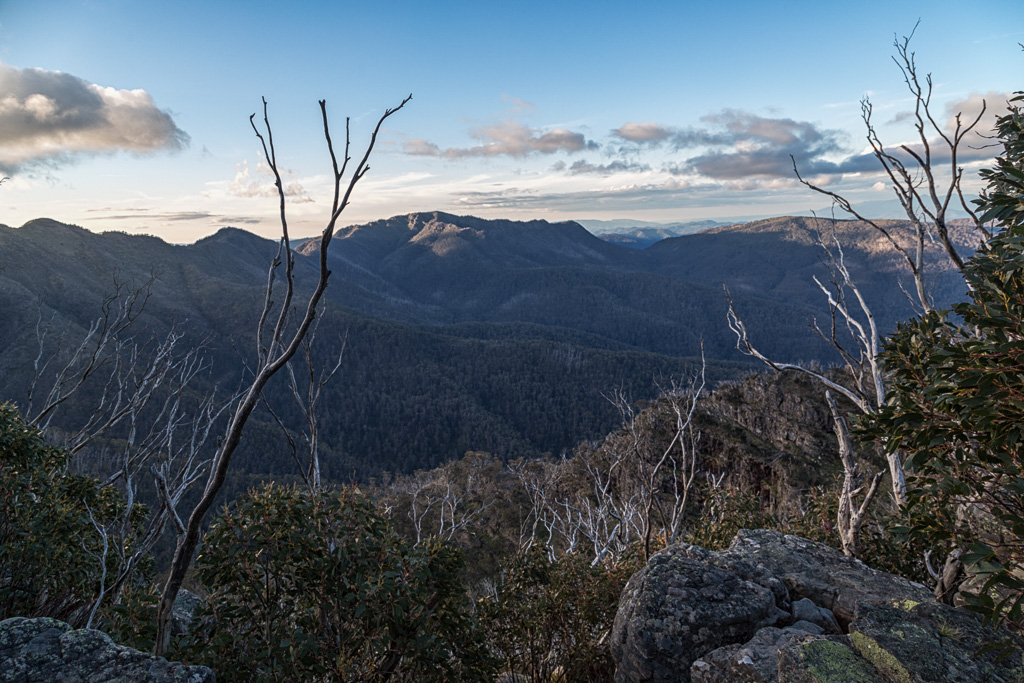 Mm… Yes, this was to be the following days adventure and although impressive, I felt a small amount of panic. I guess this was brought on by the fact I was already puffing? ON A FIVE KILOMETRE FLAT WALK FROM THE CAR. Phew, it’s good to get that out of my system.

I reached Macalister Springs, Alpine National Park and admired the centrepiece, Vallejo Gantner Hut. Quite a curious design, but I loved its originality compared to most mountain huts. More on that in a minute. The wiry crew I’d met earlier were already there, setting up inside. They encouraged me to also sleep inside, but this is because they weren’t aware I snore like a Yeti who’s having a Chinese burn applied to his wrist. I was concerned for both their eardrums and the safety of the structure. There was possibility I could suck the walls in during the evening and awake with the hut inside my stomach. That would be disappointing for everyone.

So, being a good bloke, I set-up well away from them, down near the water source, which happened to be flowing at a good rate. It was a case of quick eating and early to bed. Where were MK and the General though? I didn’t have any phone coverage, but I assumed they’d appear in the middle of the night.

I hit the kipper and slept pretty well, although I was awoken by rain falling at times. Come morning though, it was all calm. No wind and barely a sound. Sticking my head outside, I was confronted with a thick morning mist. The dampness and cloaked surroundings did make for some nice photo opportunities… 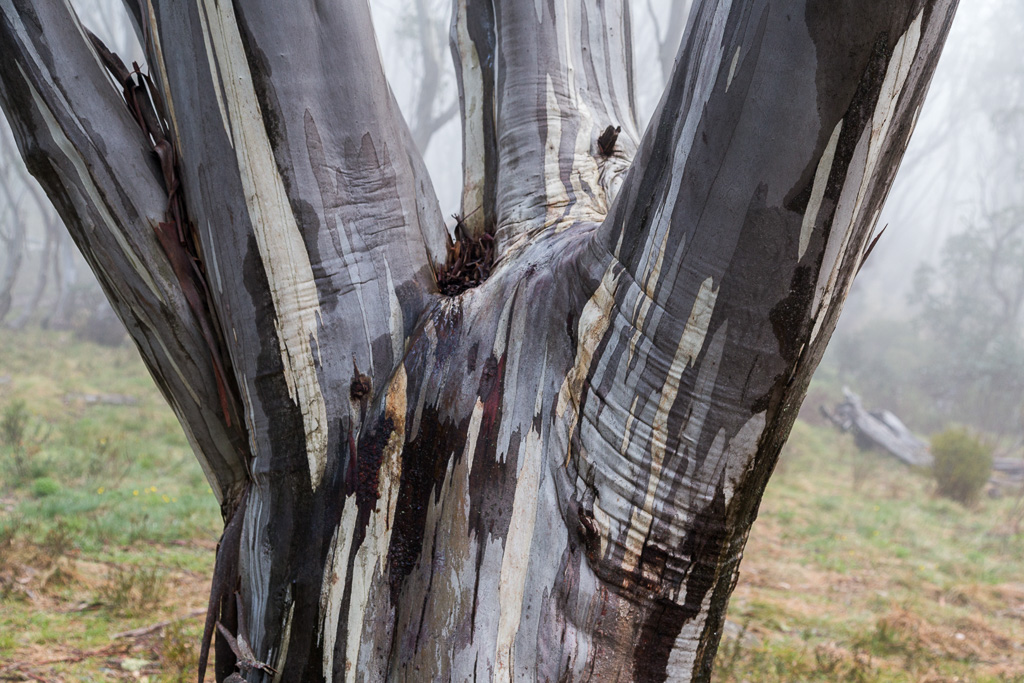 …as I inspected the hut… 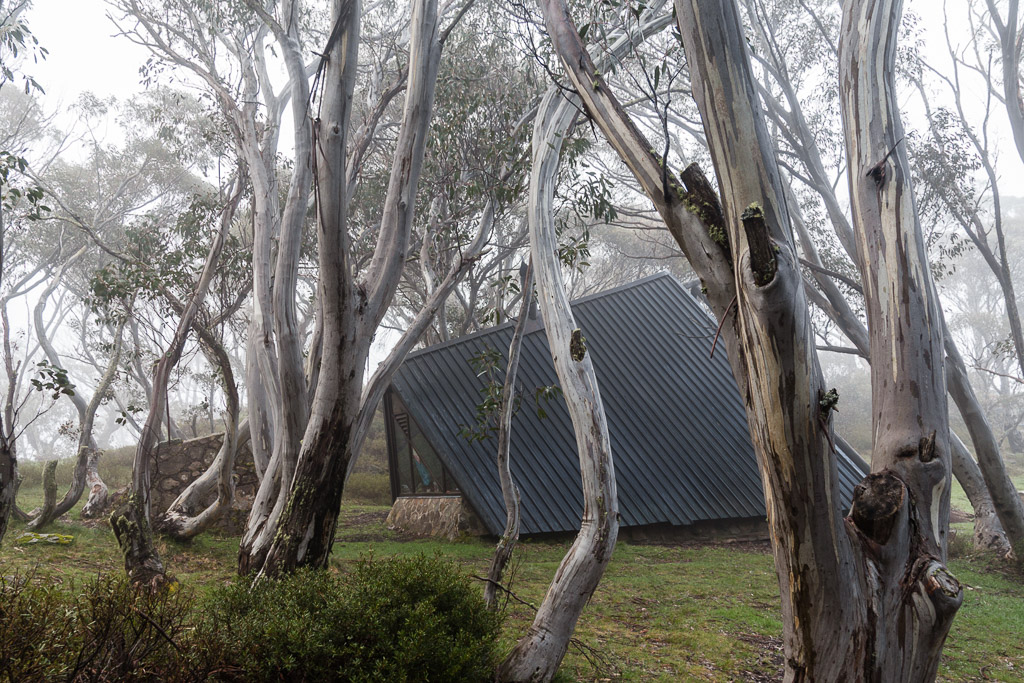 …and its interestingly angled roof. 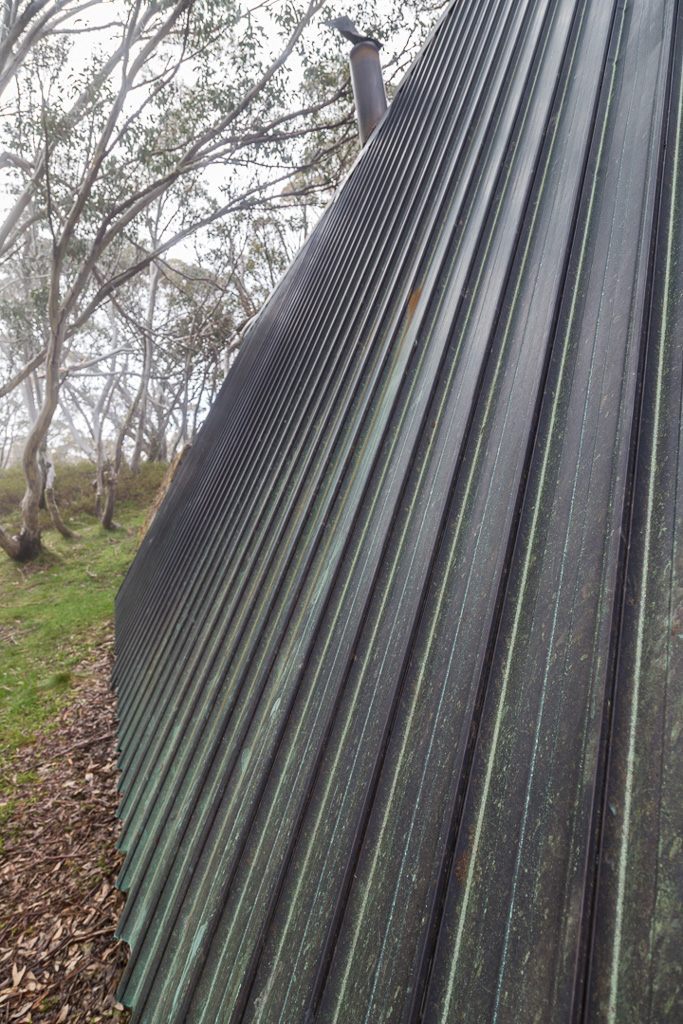 I had no problem losing my non-stealthy tent… 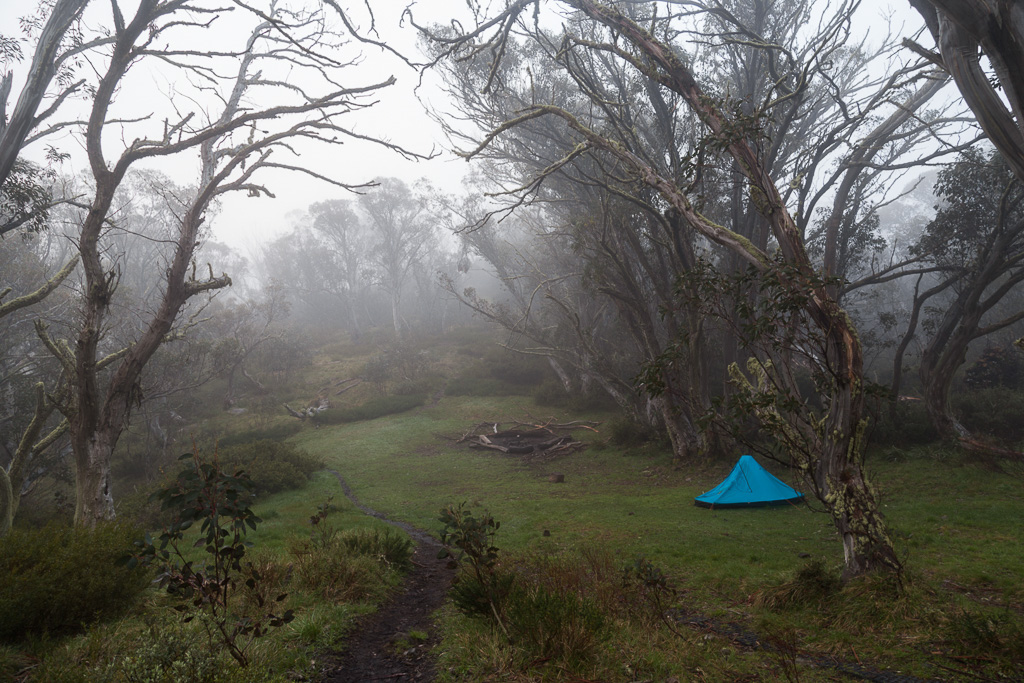 …whilst pottering around looking for the odd cobweb. 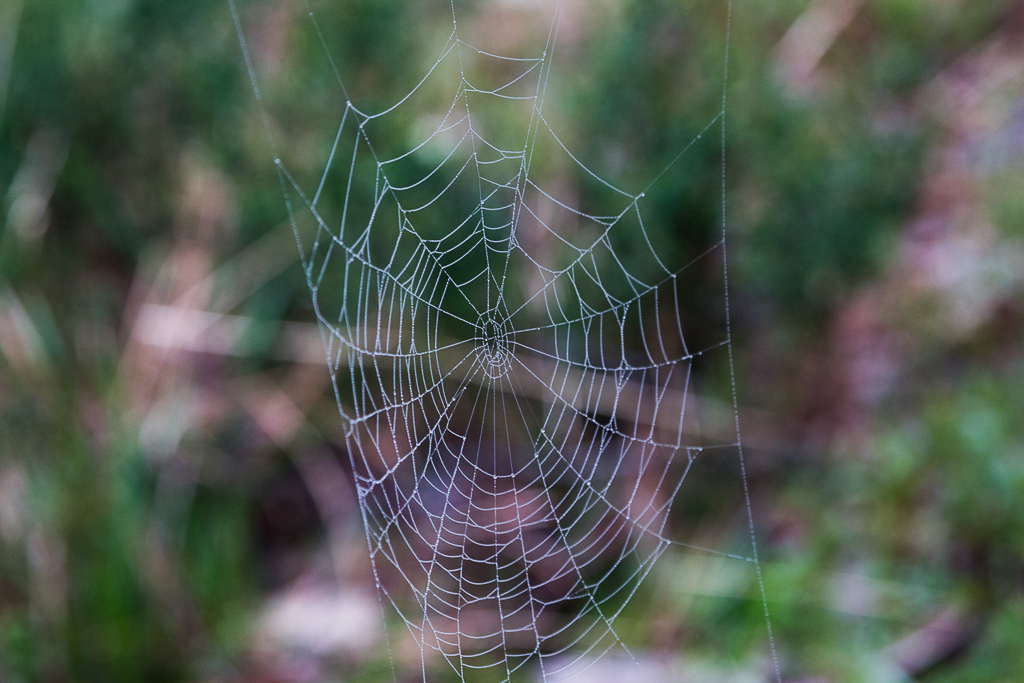 A crow kept a steady eye on me, in case I dropped any snacks… 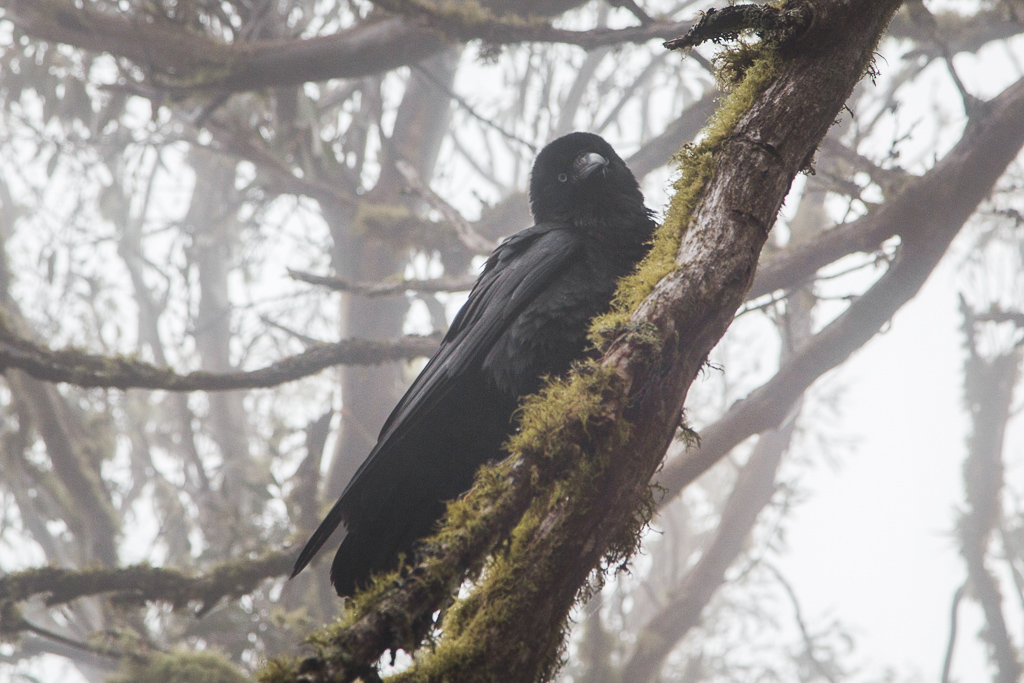 …whilst I admired the strange branches on the Snow Gum trees. 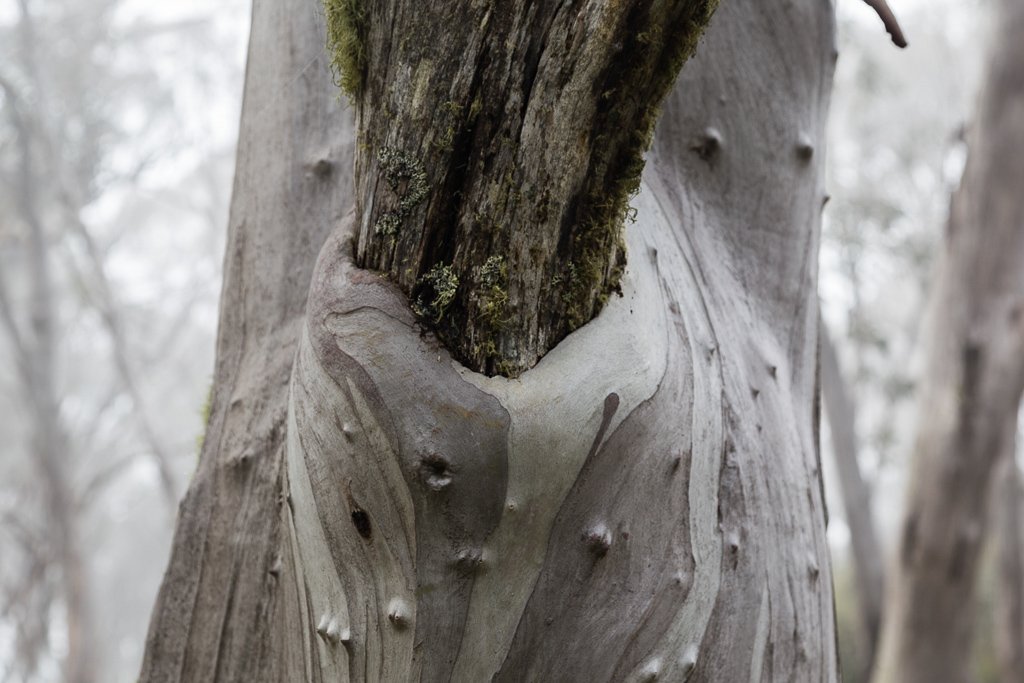 Is there something missing though? Yes, there is. I ventured up to the hut in the morning and found no sign of MK or the General. Mm… Knowing they were coming late, I did consider whether they’d driven off the road at some time in the evening. After a bit of stuffing around, I did manage to get one bar of reception on my phone and a text informed me they’d only made it as far as Howitt Hut and would meet me in the morning.

So, I had time to bum around. The wet tent was now packed and the wiry group had taken off. I didn’t have much to do other than take photos of unusual looking bugs who were walking on my hat. Pretty intense stuff! 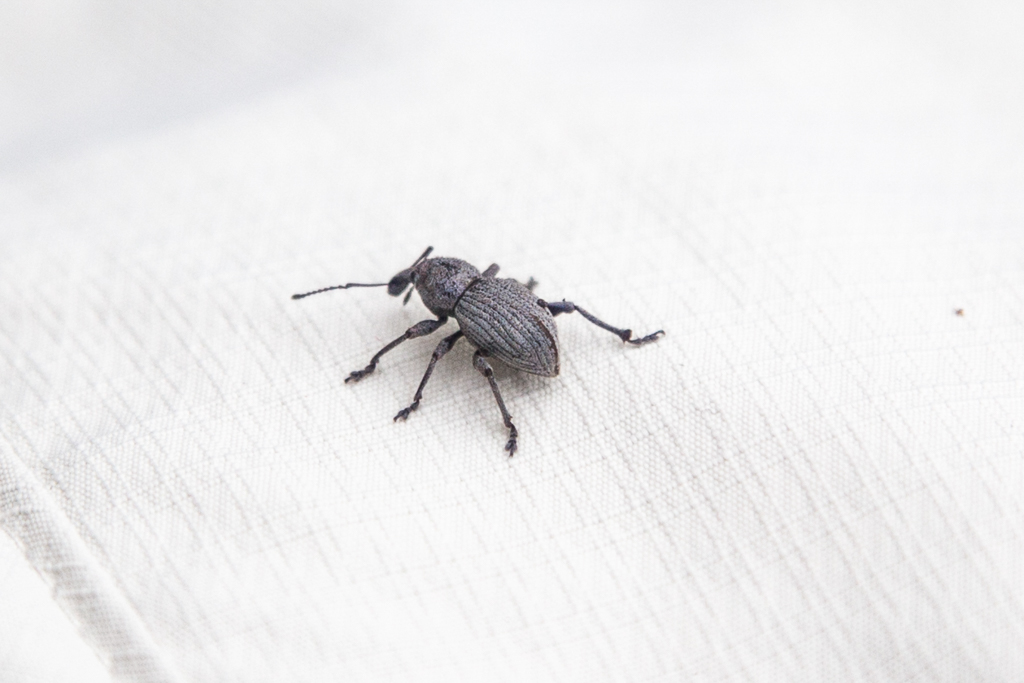 Eventually my walking companions arrived late morning and by now, the landscape had changed. The sun shone and the mist was lifting. We were ready to go, although the Crosscut Saw was still covered in cloud. What sort of adventures would this day on the ridgeline bring, other than freestyle swearing..? 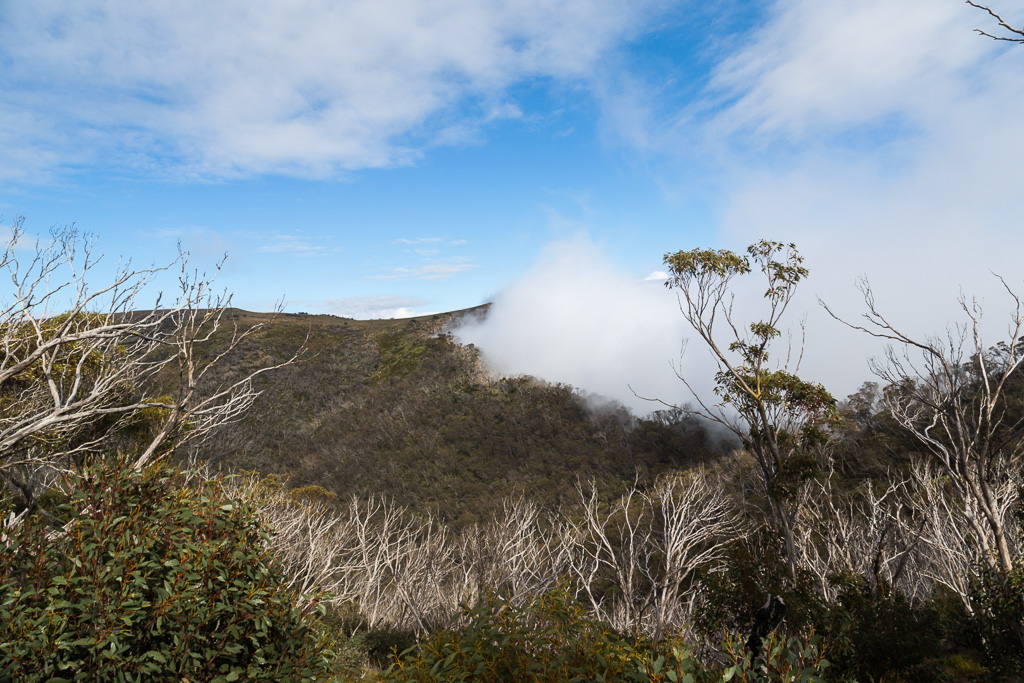 Next up, the stroll to Mount Speculation. In finishing up, I’m impressed I’ve padded out a five kilometre walk so well. Hopefully you’re not dribbling from the mouth due to a sudden coma.