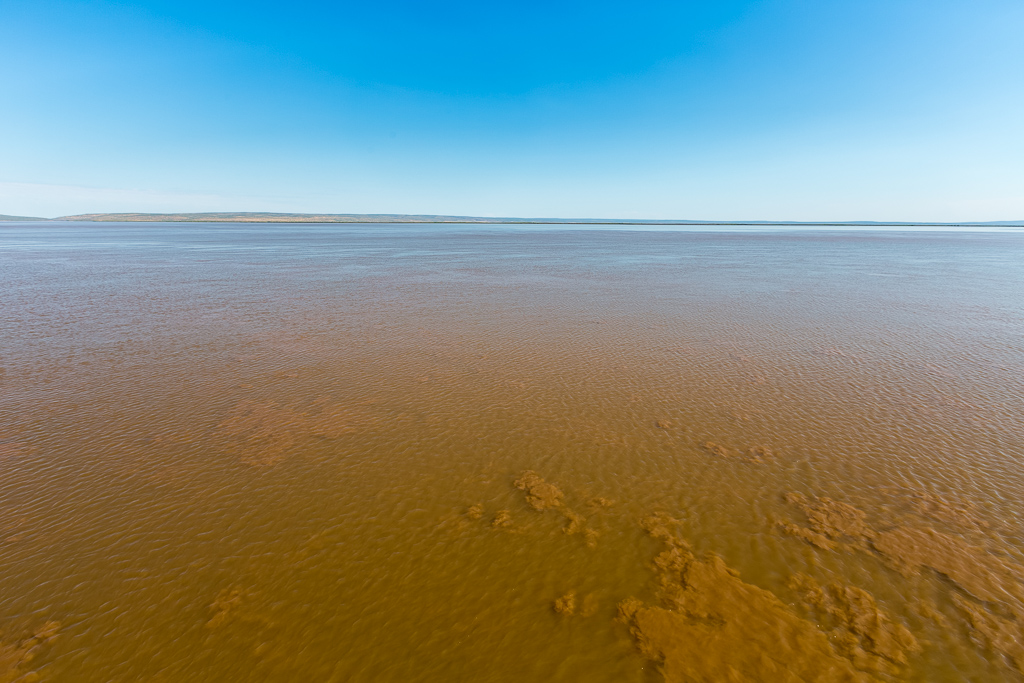 Are you wondering what’s going on with the undistinguished photo above? It’s the headline picture for this entry and it’s meant to be what WordPress calls a ‘featured image’. You know, an opening salvo for a post, which upon sighting, you’ll feel light-headed from the amazing visual experience and then want to keep reading, as you really want to know what’s going on with that AMAZING PHOTO.

Not this time though. If I put a nice image at the start, you’d be getting the best straight away. It would be like having a kilo of chocolate before your vegetables. Unless you’re a true hedonist. I guess then you’d have one before and then another after those brussel sprouts. Sure, you may not be able to move from the excessive calories, but it’s a worthwhile trade-off.

No, the idea of this post is to increase the oomph factor of the pictures as I go. I mean, I’m writing about a lookout that I drove to. Yes, that’s right. I sat on my arse in a car, as it drove up a hill and I didn’t walk a step. As you can see, I’m going to have to pull out all the stops to get this one over the line.

As you’ve gathered by now, this is another snippet from the six week road trip up north from a few months ago. I outlined the rough itinerary in this post and in future I’ll write the occasional spiel about the trip. Really, there was so much in it, I’ve already started to get things mixed up. Like this one.

In case you’re wondering, the Wyndham I’m talking about sits at the top of Western Australia and has nothing to do with the Wyndham that’s about 10 km from my house. At least I’ve got something to talk about with the northern version, as a post about Laverton might be too tough a nut to crack in the writing stakes.

Only a few months ago I was up north and already I’m finding I need to lie back on the couch in my gumboots and ponder which location had what. They’re all a bit of a blur and Wyndham is no exception.

After some thinking, this is what I came up with.

Okay, it was stinkin’ hot. Mm… Actually, so was the entire country, so that’s not real notable.

It had an enormous crocodile in the main street. You know, one of those big, fake types, just in case you’re wondering if it was an actual man eater.

Unfortunately it was notable as the only place where mosquito’s would swarm in the middle of the day. You’d think they’d be nocturnal like everywhere else, but not up there. You know when you pull into a caravan park and spot a nice, expansive piece of lush grass and no one else is anywhere near it? Well, there’s a reason for everything. What appears to be the ideal location turns out to be lethal, because if you venture into it, all your blood will be extracted by a billion mozzies.

Oh, funny how writing this stuff can twig a memory. I just remembered I set up my tent near a caravan that appeared to have no occupants, but up north, a lack of people can be deceptive. I mentioned in the Wolfe Crater post that during the middle of the day, some places would be sparse and I assume this is due to the heat. The ol’, ‘I love the sun so much, how can you live down in freezing Victoria, all I need is heat’. Yet during the day when the air feels like you’re sucking on a fan-forced oven, the heat lovin’ chumps are lying in an air-conditioned van. You know, because it’s too hot outside. ‘Oh, but I love the sun!’

Anyway, in this van with the mystery occupant, there wasn’t a peep of noise until suddenly a horrific sound oozed out of the flimsy aluminium walls. Yes, it was some bloke singing to real country and western songs. There was a backing track, but he was applying his own ‘vocals’ to the tune. You know what? I like country and most people seem to only associate it with a certain style. You know, the big hats, singing about my dog has gone, whilst bootscootin’ at the same time in a Republican-Garth-Brooks-type method. There’s more to country than those gruesome sounds, yet van man was doing exactly that. IT WAS BRUTAL.

I kid you not, but people approached him and said he was fantastic. All this did was make it worse, as he wallowed in the accolades. Some home truths were required and instead of admiration, he needed to be informed that he can’t sing for shit and then his acoustic should be smashed over his head. Not just for the public good, but for the sake of humanity.

Sorry, I got side-tracked. Back to the highlights of Wyndham. Oh yeah, let’s have a look. I’ve found some photos. Here’s the kitsch 101 crocodile. 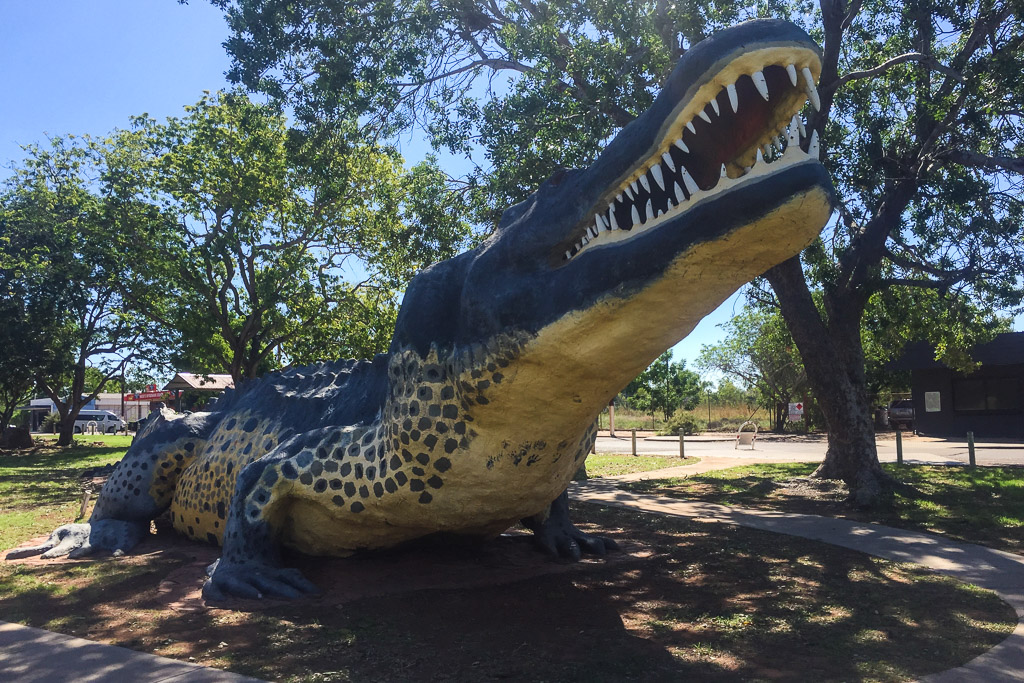 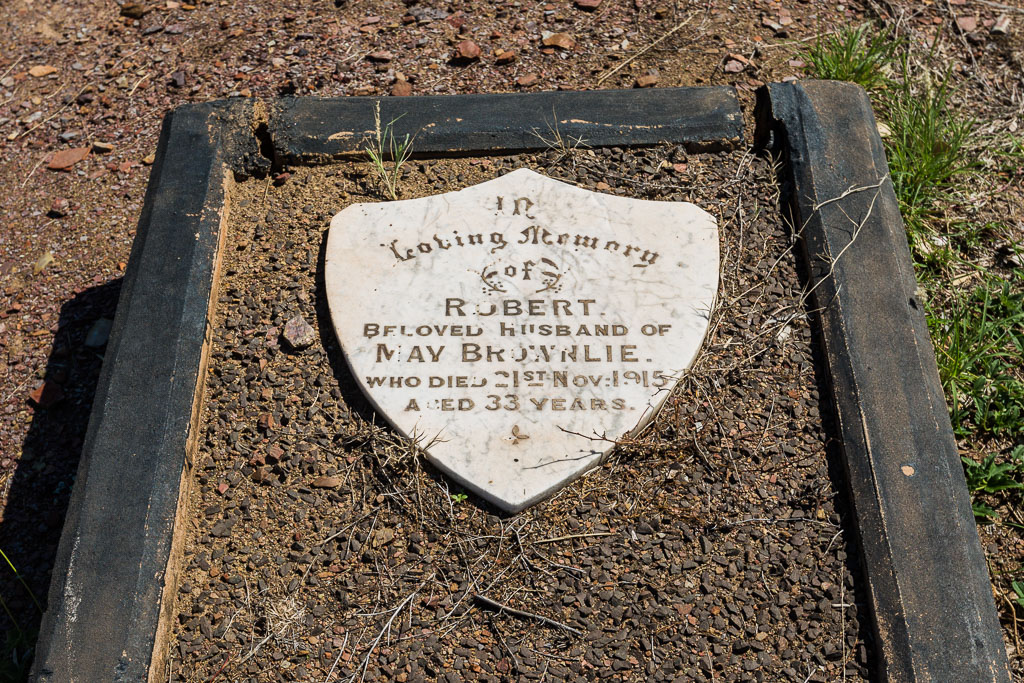 … and a boab tree where they used to lock people up in it. I kid you not. Maybe this needs its own post. 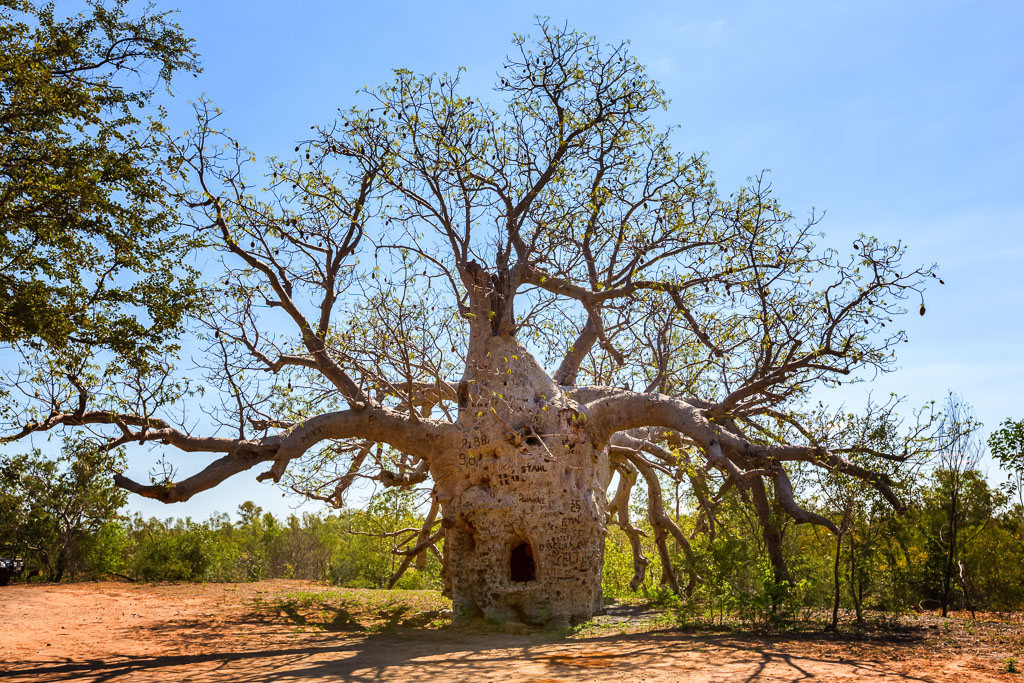 What else? Mm… There a port, although I’m not sure why it has such a lofty title. When I think of ports, I picture the QE2 docking, whereas all I saw were a few boats, which were no larger than my trousers going by. Anyway, it’s called a port and it leads into what this post is actually all about.

Standing on the pier, it felt like I was staring at the mouth of the Amazon. The water is part of the Cambridge Gulf and it seemed the opposite bank was in another time-zone. It’s nuts. I mean, look at it. Try swimming across when you’re pissed one night. It’s definitely not the Yarra. 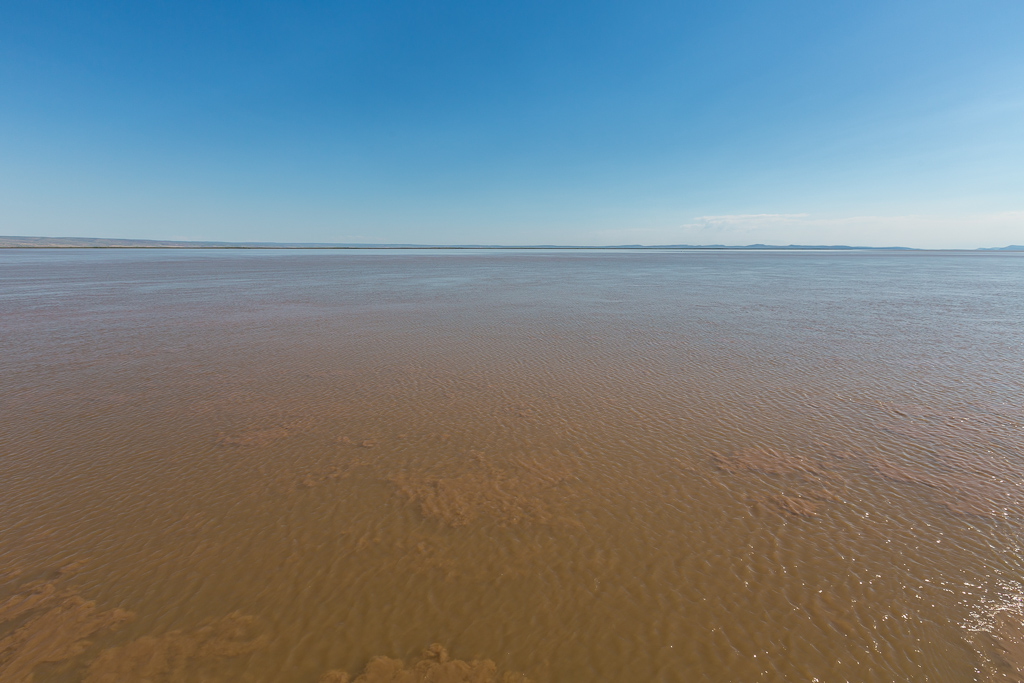 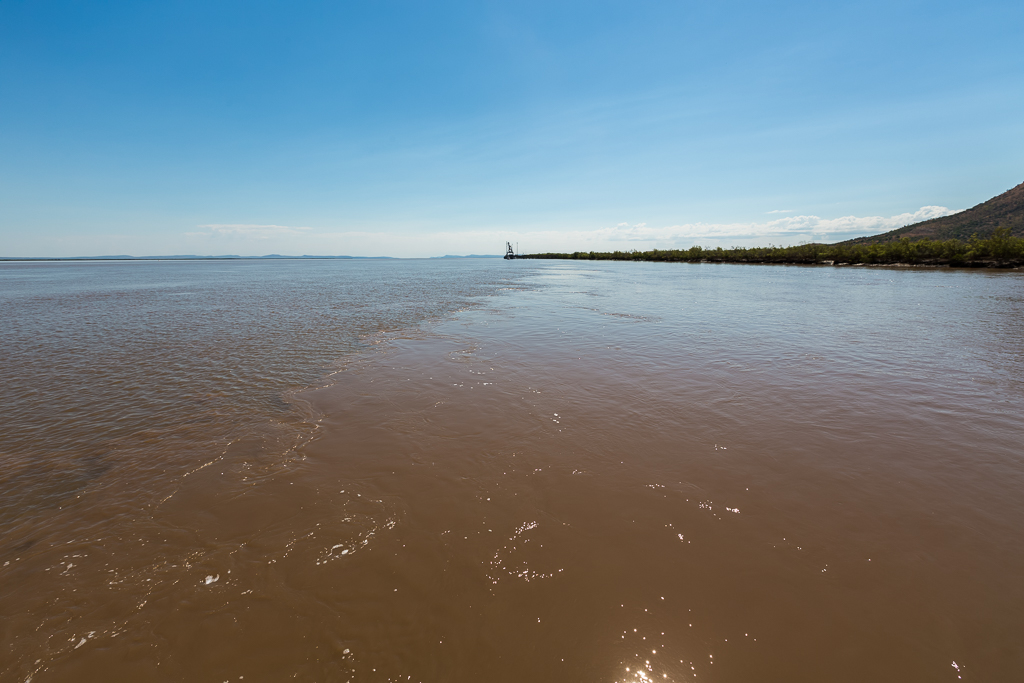 …but this area is overlooked by a hill nearby. See the tower on top? That’s the Five Rivers Lookout. 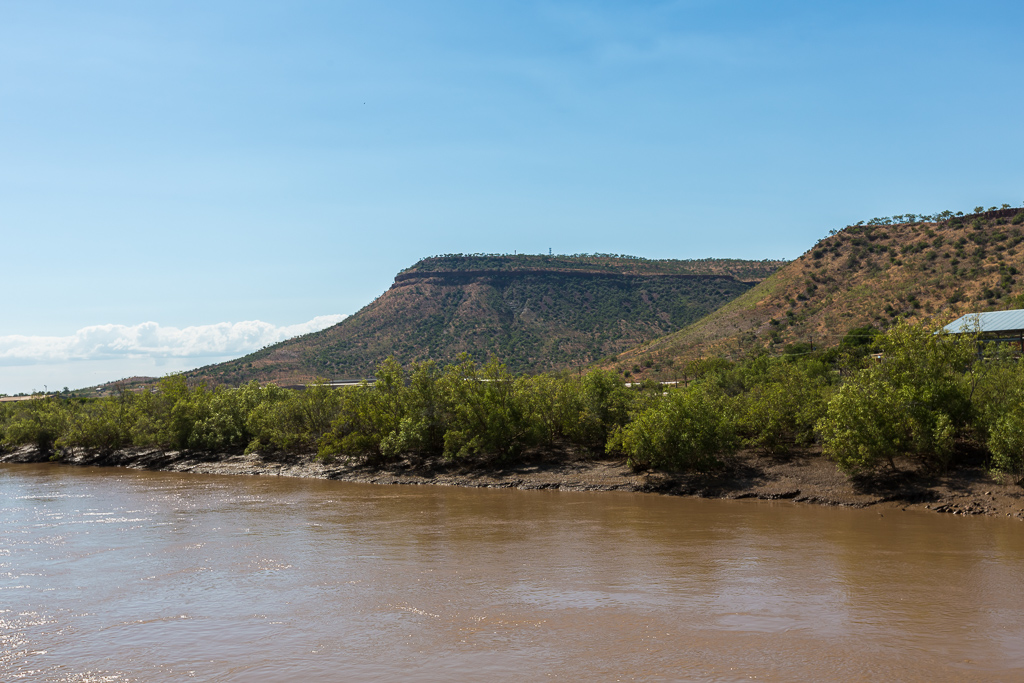 Right. So far, this all seems to be a bit piss poor, doesn’t it? Photos taken in the middle of the day with not a hint of contrast aren’t helping, but I was told that little spot on top of the nearby hill would blow my mind. We were accompanied by ‘Gympie’s Finest’ and they said the view from this lookout would be a life altering experience. As you can imagine, I was feeling sceptical and I think my ‘enthusiasm rating’ was running at about 2 out of 10. How good could it be?

Anyway, after returning to the caravan park and listening to some bloke wailing to classic country in a voice that sounded like he was terminally ill, we ventured up towards the lookout as the sun began to sink.

I have nothing to show you about the drive up, as literally, it’s a road up a hill and I didn’t even get the camera out of the bag. Things were still pretty mainstream as we arrived. I got out of the car and walked towards the view and even now I don’t think I can give justice to that initial moment.

Upon sighting an enormous vista, my vision was blurred as my eyeballs spun in their sockets like slot machine lemons. All one can say is ‘Oh my God’, or they can be more up to date with text-speak, by blurting, ‘Oh Em Gee’. Then again, you could go for the time honoured word that was my choice on this occasion. FUCK.

There’s an information marker that informs you’re looking at the point where the Durack, Ord, Kink, Pentecost and Forrest Rivers meet (have I counted up to five correctly?)… 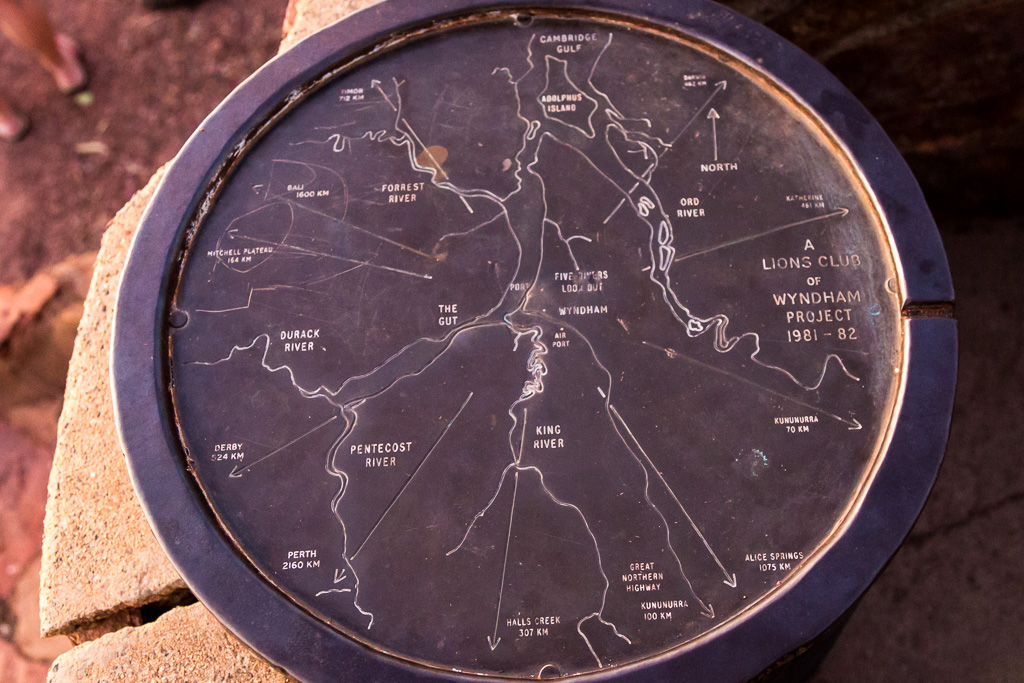 …but who cares, when this is in front of you. 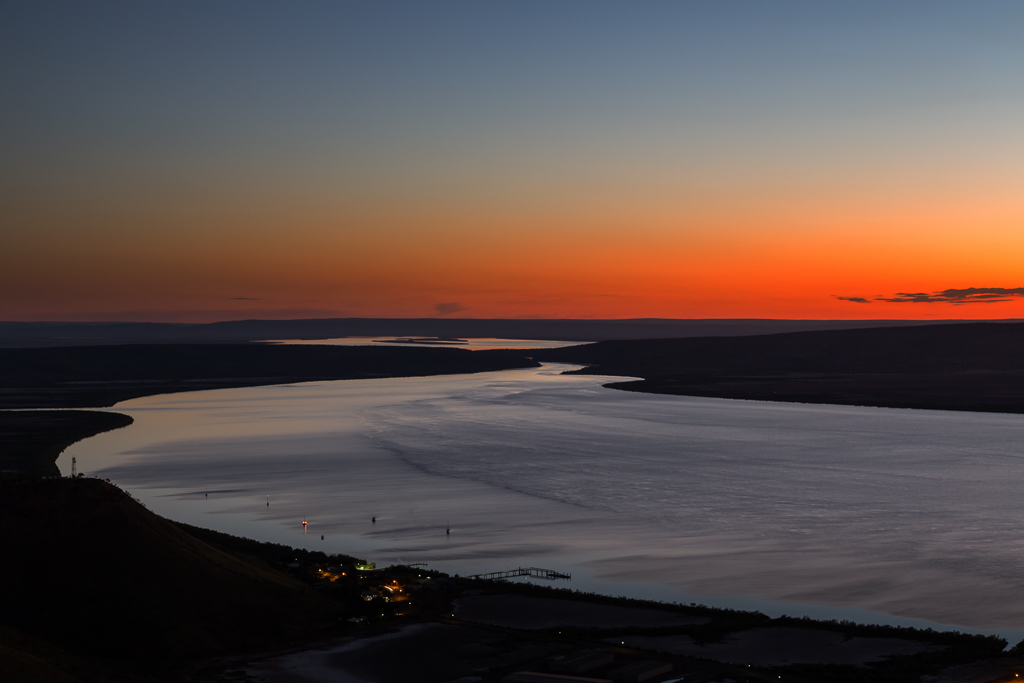 See that little pier in the water at the bottom? That’s where the day time photos were taken. The expanse of flat landscape and the scale of water is completely insane. I have to admit, but ‘Gympie’s Finest’ were on the money. IT’S THE GREATEST LOOKOUT I’VE EVER BEEN TO.

Barges sat in the water like miniature aircraft carriers. Hell. As if I’ve got a clue. For all I know that could be the USS Nimitz down there. 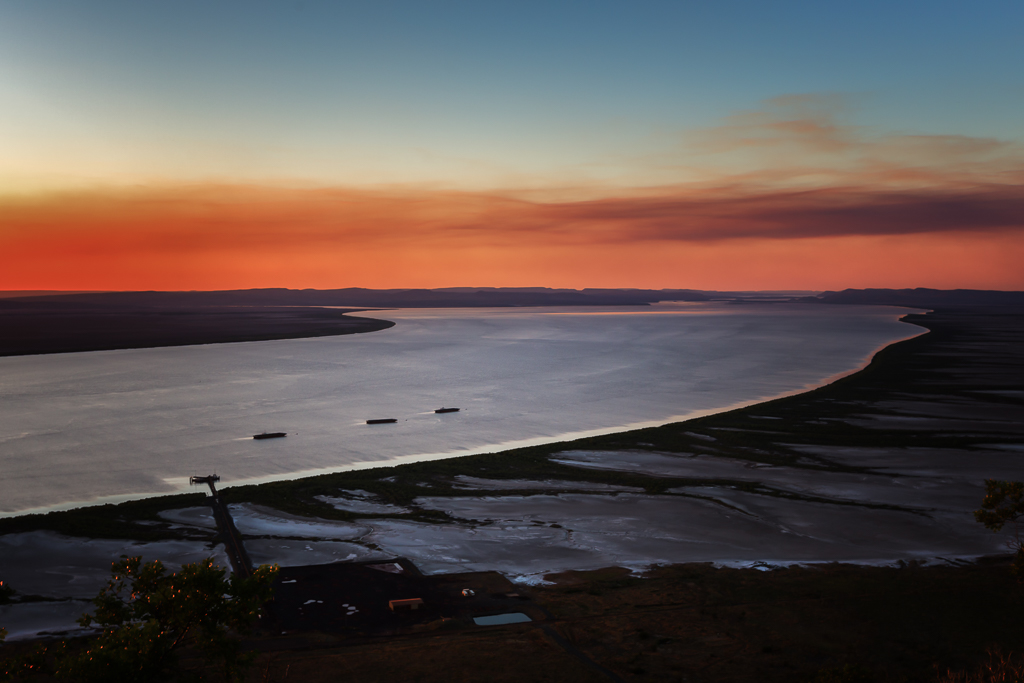 The setting sun was throwing off so much burning red glow, it made the photos look ridiculous. It seems everyone ramps up the saturation in their landscape pictures, but for these I’ve taken it out, otherwise they looked absurd and almost ‘fake’. 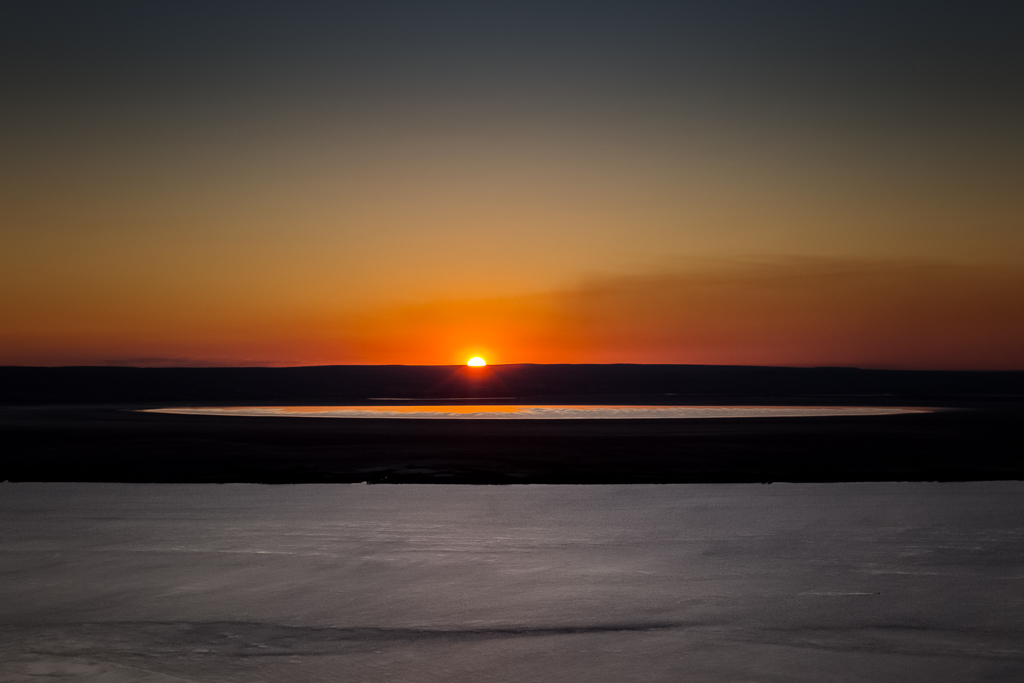 The sun set over what appeared to be a lake, which sat behind the enormous breadth of the gulf. This elliptical saucer of shining light stood out above the now darkened bank opposite. 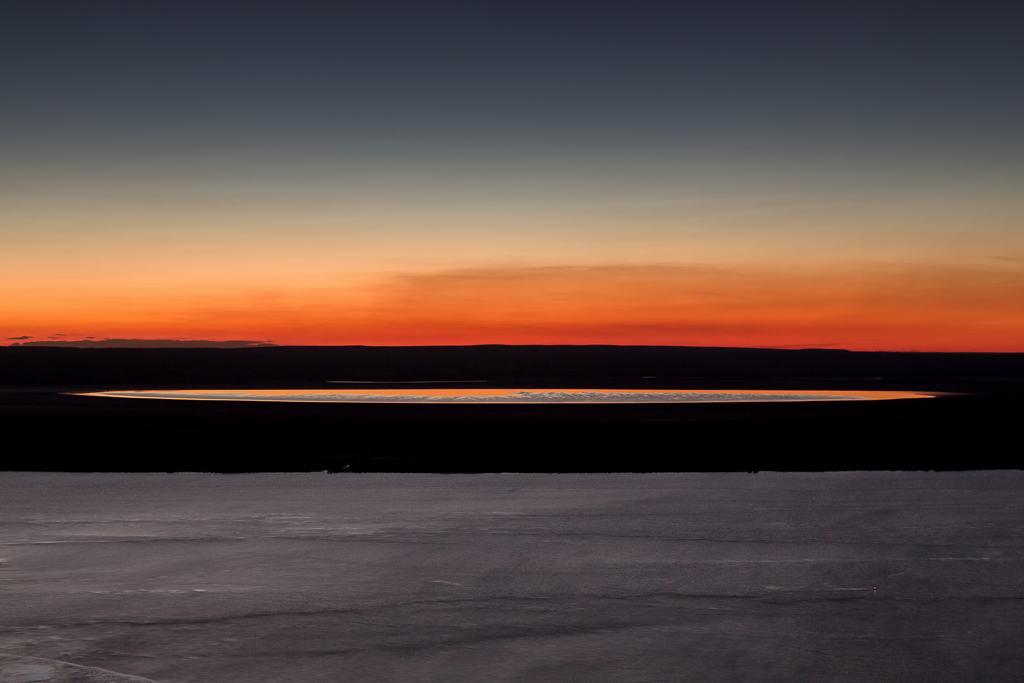 Who knows what’s going on in the last photo, as I haven’t got a clue and I was there. About the only thing to distract me from dragging my jaw around the lookout was a stealth attack by a million ants. I couldn’t go anywhere without dozens running up my legs. Why do they do this? It would make sense if they ran to a spot and stopped, but instead they just continue to sprint all over the place. Is it for some ant laughs? Exercise? I’m not sure, but it took a concerted effort to stem their rapid rise up my pants. My preferred counterattack looked like combat patty cake. On amphetamines.

Some other bloke was up there and while he said the view was good, apparently it’s a lot better in the wet season when storms are passing through. I tried to picture this and figured if the sky was full of fearsome cumulonimbus, I think I may faint. I believe the visual experience would cause my brain to shut down. Oh, can you imagine the stars on a moonless night? Mm… Plenty to think about, but as the light faded… 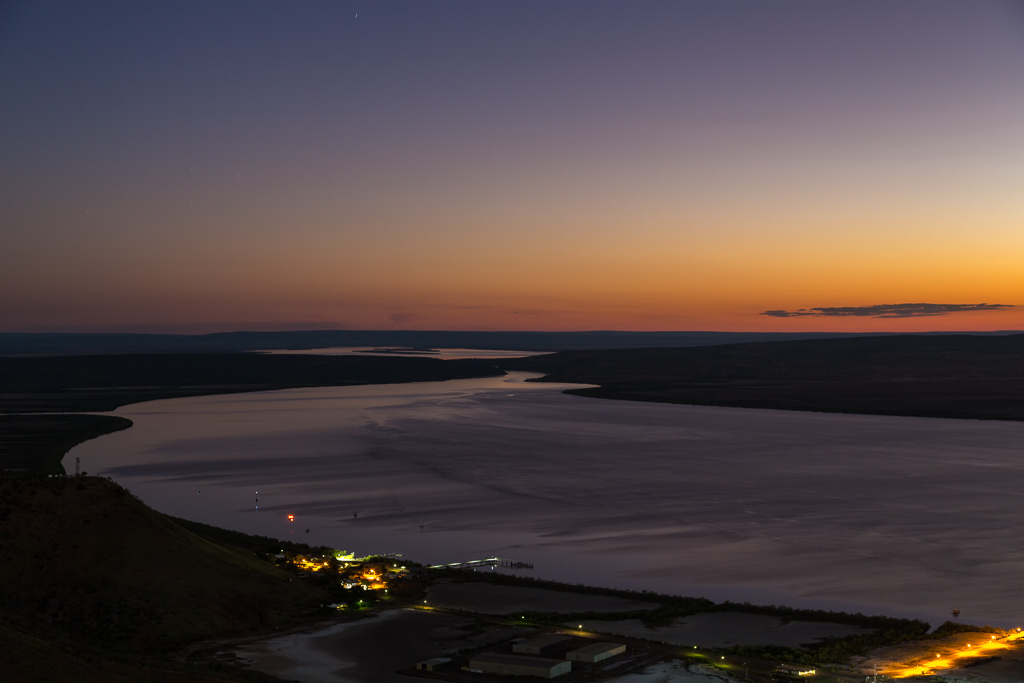 …we were done. The Five Rivers Lookout might be a fairly drab name, but its wow factor is too hard to explain. You’ve got to see it for yourself, as it’s a sensory experience. The combination of a slight breeze passing through, which allows some comfort from a burning hot day. The unworldly glow of a vividly red sunset. A constant feeling of motion on your body as a horde of ants move across your sticky, sweat covered skin. What more do you want? 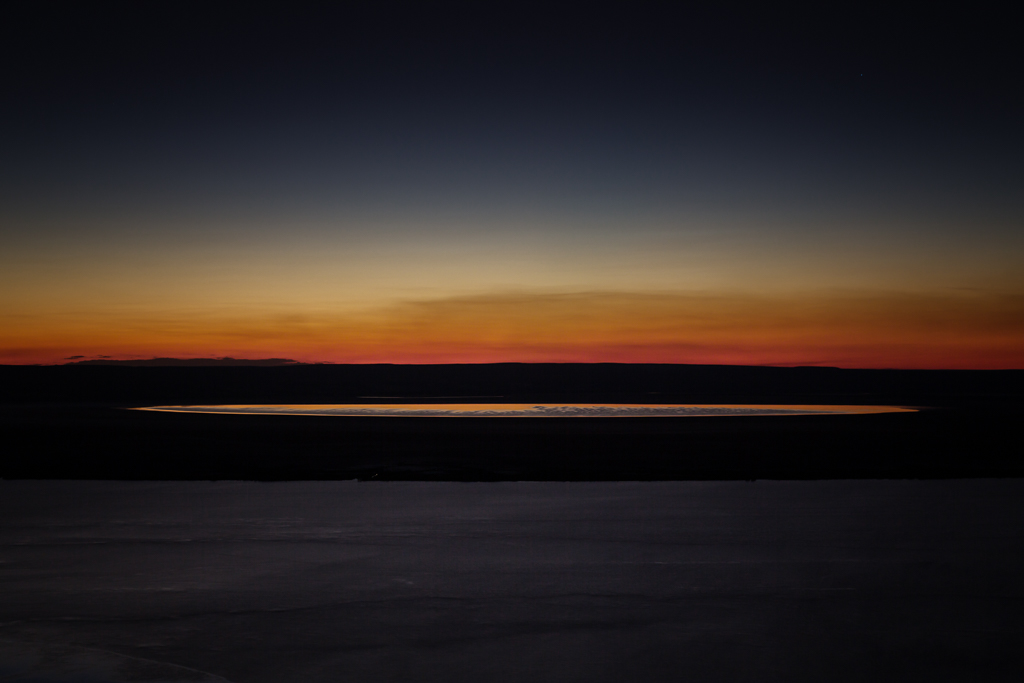