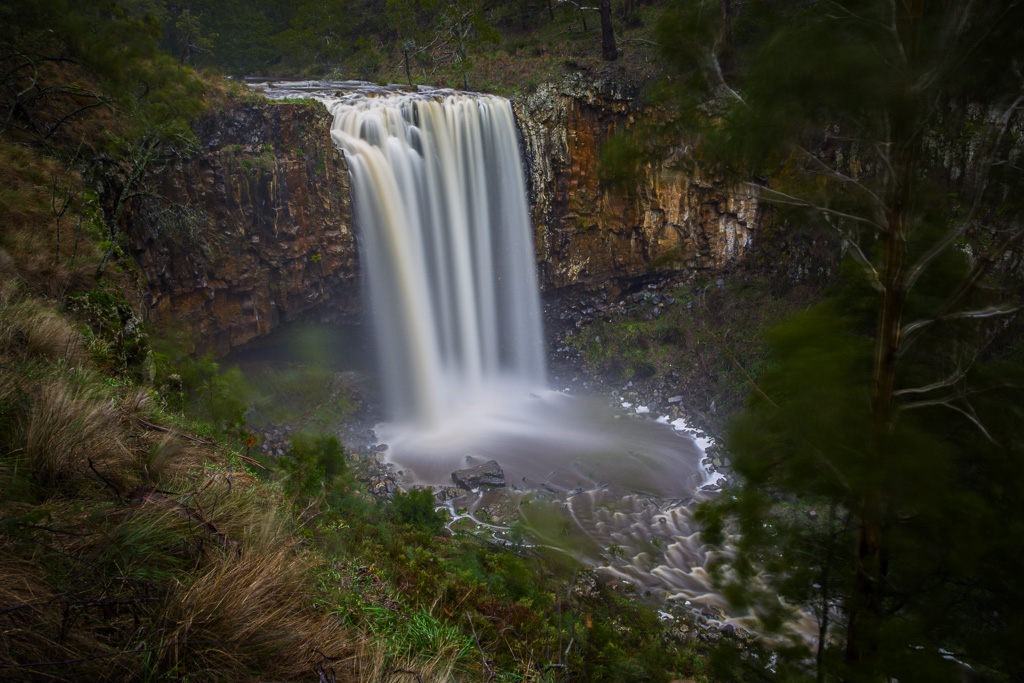 Are you getting sick of waterfalls yet? Seeing how it’s the third post in a row on the same subject, I thought you might be feeling the pinch. I’ve got a disclaimer though. It’s winter, so it’s officially the time to see them living up to their job description. This time last year, I was up in the Grampians and it was dry as a chip, so it’s nice to see a wetter season for a change.

Oh, you’re not going to get write ups like this when the weather warms up either. I don’t know about you, but a dry waterfall on a baking hot day is one of the most aimless photographic subjects I can think of. Anyway, I think you’re being let off easy, as I have about another 20 waterfall locations that I’m not even going to post about.

As is the way lately, this is another rapid fire post. There are a couple of reasons for this. Firstly, I’ve only got about five photos to play with. Secondly, I think it’s better to rattle off more frequent entries, rather than wait for a magnum opus once a month. At times I think I’m replicating Ulysses, but in reality I’ve embraced the little known writing genre called shithouse.

Before I get into some more waterfall mania, I have to do some spring cleaning, so this is officially a spring cleaning post in winter. I’m also attempting to compile this post in one hour. The reason for the tight schedule is I’m feeling lightheaded from paint fumes and there’s a possibility I could slip into a coma at any moment. Yep, the painter is back and he’s working around the house like a madman.

If you’re wondering, yes, he’s the same bloke I mentioned in this old Computer Calamity entry. You know, the generously sized gent who I thought was having a heart attack the last time he was here. Do you like my nondescript description? If you’re not sure what I mean, picture a bloke with a Volkswagen tucked under his shirt. Hopefully that gives you an idea what he looks like.

He’s got some good painting skills, as he really rips through a few walls. There are some downfalls though. He might be a certified ace with a brush, but he’s crap at going to the Gents. I’ve never known a bloke to piss on the floor so often. I can only assume the late model European car under his shirt cuts off his pecker vision, leaving him to just aimlessly wave his tackle in 360’s, whilst hoping to get something into the porcelain.

Okay, moving on from urban dampness and onto other things. As you know, I switched from Blogger to WordPress last September. I’m still awaiting a template update to make the whole thing work a bit easier, but whilst that’s being tinkered with, I had a look at my statistics. You know, page views etc. I’m not sure how WordPress works, but the page view numbers are absurdly high.

The figures are bonkers and I’m positive most of the stats are coming from some bloke sitting in his mothers basement in Eastern Europe. I mean, I get so much spam it’s ridiculous. Even better is the spam producer has given up trying to make out they’re legitimate comments. Once they’d be worded as if they’re a fair dinkum person writing them, but lately all I’m getting is messages from a bloke called ‘Penis’. Now, I’m not sure about you, but I don’t think that’s his real name.

Okay, Trentham Falls. During one of my Turpins Falls trips, I zipped up to Trentham to have a look. In case you’re wondering, I wasn’t wearing my waders at the time, but the gumboots were on full display. Don’t panic either, as you might be pondering the last photo in the previous post and wondering if I was in that ‘attire’. No, you’re wrong. I was wearing a beanie as well.

The thing about Trentham Falls though is I ended up being confused. It took a bit of thought, but I think the last time I paid them a visit was in 2001. Is this possible? That long ago? What made it tricky was my hazy recollection is completely different to what I found the other day. Fifteen years ago, I was positive I walked all the way down a path until ending up near the river. Unlike now, where there’s only a 100 metre walk to a lookout, which still leaves me a mile in the air and that’s it. Huh? Am I delirious? Maybe I’m thinking of another place, but was there an old track that’s since been blocked off? I’ve no idea, but the current configuration means I only took a handful of photos, as I couldn’t find many angles to work with. Mm…

Anyway, I lugged the tripod down to this solitary lookout and took a handful of photos. Yes, that’s how much I was struggling. Oh, it was insanely cold as well, so it was hard to lounge around and in the end it became a hit/run mission.

There’s the traditional close up… 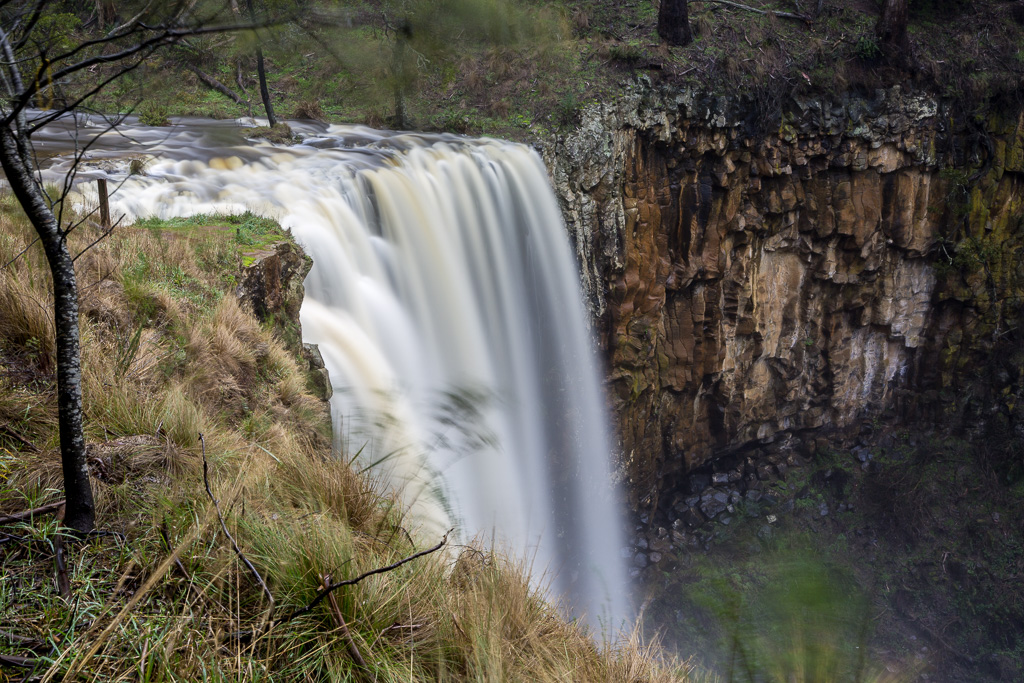 …before I walked about another ten feet and then took another one. Traditionally of course. 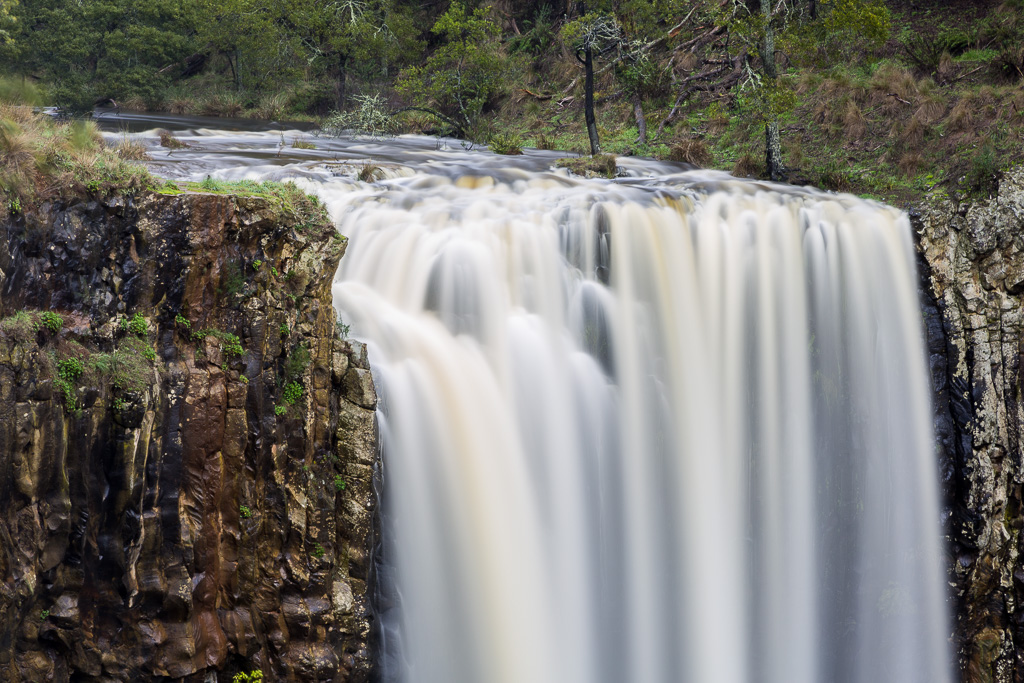 I do have one thing up my sleeve though. Don’t roll your eyes, but yet again I’ve done some perusing on the State Library of Victoria website. Have a look at this. Yes, it’s a postcard of Trentham Falls and it’s dated 1905. That’s pretty old, isn’t it? Not to mention being in glorious turn of the century colour. 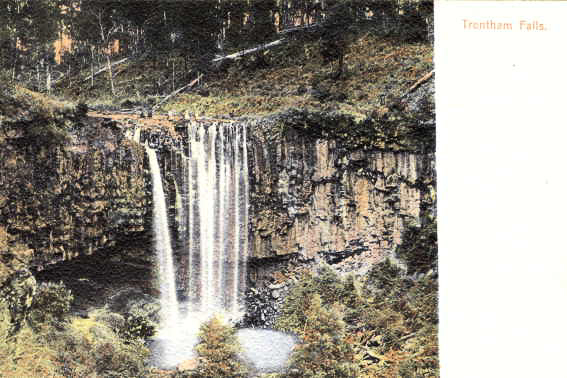 Considering the image, it’s more or less the same angle as the current lookout. As we can see here. 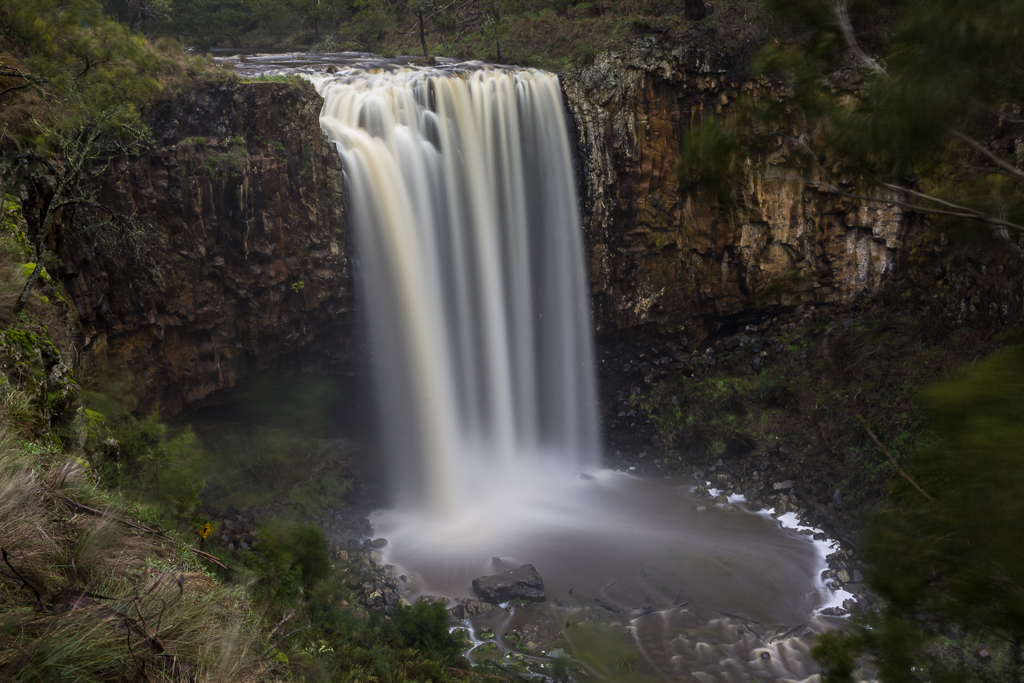 Then again, most the pictures on the library website are taken from the Coliban River that flows over the falls. Yeah, that river that I thought I was at once. Maybe I dreamt it? I guess I could hop the fence and ignore the ‘keep out revegetation area’ signs and stumble down to the water? Possibly, but what’s the bet, I go arse-up on the way down and need to get medevaced out? Can you imagine the humiliation? I guess it would make for a decent blog post though. Compared to this one at least.

Back to the falls. I stood at the lookout and looked. I really tried to think of a different angle, but all I had was about 10 feet of a clear sight to work with and came up with nothing than what you see here. Oh, other than a close up of the pooling water. 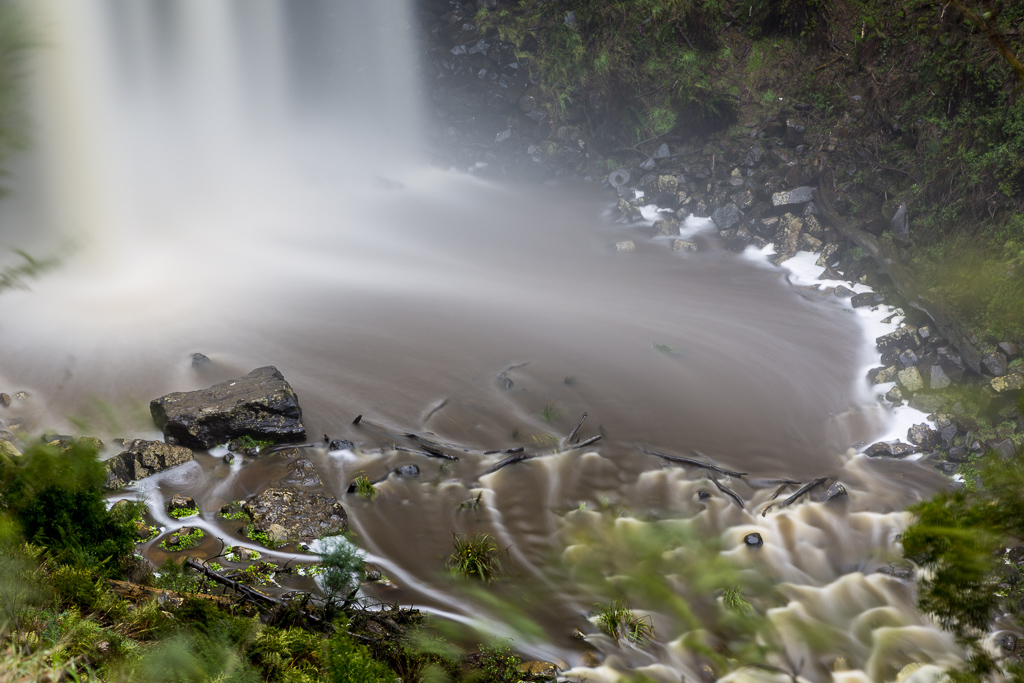 That’s it. Turpins Falls took three visits and about six hours to document, whereas this one only took about 15 minutes, before I put the tripod over my shoulder and headed back to the car. Trentham Falls, Trentham is only a short wander from the carpark and is always worth a visit, no matter what the weather.

There you go. Another waterfall and the post is done. I’ve done what I set out to do right now, as this has been written in 45 minutes. Surely it’s a new Fiasco record. You got the previous post at the end of last week, so although it’s Wednesday now, you won’t be reading this until it’s Friday. The publishing method in this joint is pretty strict, as Wednesday is the new Friday.

Between cleaning up urine on the floor, I’ve been given some hot new waterfall locations to check out, so if the photos end up being okay, you might be reading four on the trot about tumbling water. Then again I might write about the saga of looking for an 1800’s solitary grave in a forest and a random falling tree branch. That landed on me. Can you handle the excitement?