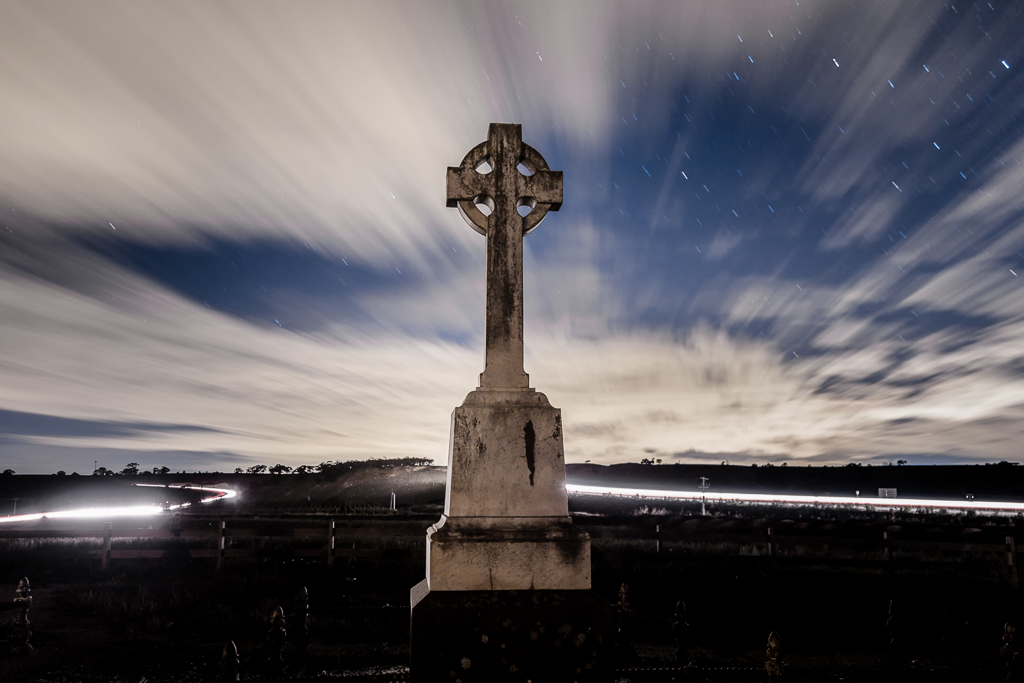 I’m back! Did you miss me? Since the last torture filled saga of the Cape Liptrap Coastal Walk I’ve barely touched the blog. That’s fair enough, as the last post took four days to write. The walk may have been nasty, but at least it was over in a couple of days.

I thought I’d throw this rapid-fire entry together before heading out for a tilt at the northern circuit of Wilsons Promontory tomorrow. It’s going to be a solo walk as my ever suffering walking companion, the Smuffin, has come down with the couch virus, so until it releases its grip and allows him to stand again, he’ll be out of the hiking game for the time being.

I can’t say I’ve been feeling real flash myself. I came down with some sort of crazed viral/bacterial/thingal quite a few weeks back and I must say my mojo has been sapped a little. I was so smashed in the head that I spent a week in and out of bed with not a lot in between. It was nice when I was feeling crap though that my mother dropped in to see me. Waking up and finding her at the end of my bed was nice, but also slightly troublesome. She’s been dead for the past six years. 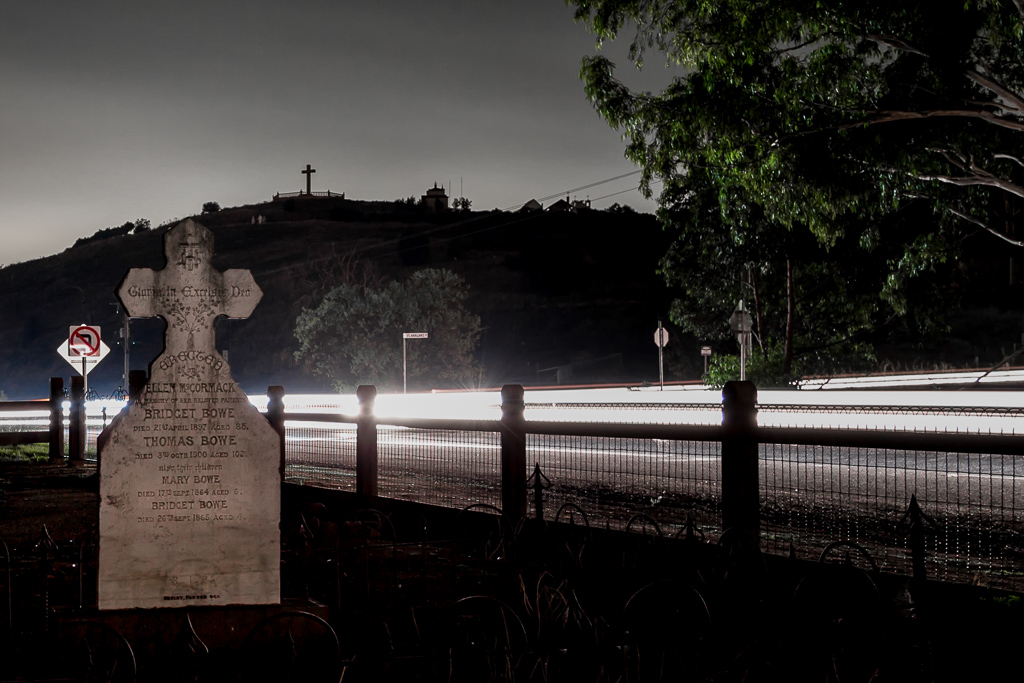 I don’t believe in ghosts, but I have had some weird experiences in the past. Unfortunately, these events have always coincided with feeling either exhausted or ill, which is disappointing. I won’t be convinced until I come home from work one day and find Colonel Sanders in my kitchen whipping up some chicken. “Hey, that’s tasty! Keep that chicken coming!!” I’m still waiting…

So, after having the most bizarre experience of being awake and seeing someone who’s dead, I couldn’t think of anywhere else to go other than a cemetery at night. I grabbed the tripod and Canon 6D before heading to the Old Hopetoun Cemetery, Bacchus Marsh which I’ve written a post about before. As a long time cemetery lover, I do like this one, even though the modern world has long forgotten about it.

Wedged in between two roads, it’s never going to be the most peaceful of places and those headlights do create a night photography/exposure nightmare. What I’ve been loving about the new camera though is its wi-fi. I can operate it on the tripod with a Canon iPhone app which allows me to perform camera settings and then use remotely. The photos in this post were taken with varying exposures of between two and three and half minutes.

They’re a work in progress, but I think they’ve got potential. Once into the swing of this night photography, I hope to let rip with something a little more fancy. As it is, all you’re going to get right now is some gravestones. 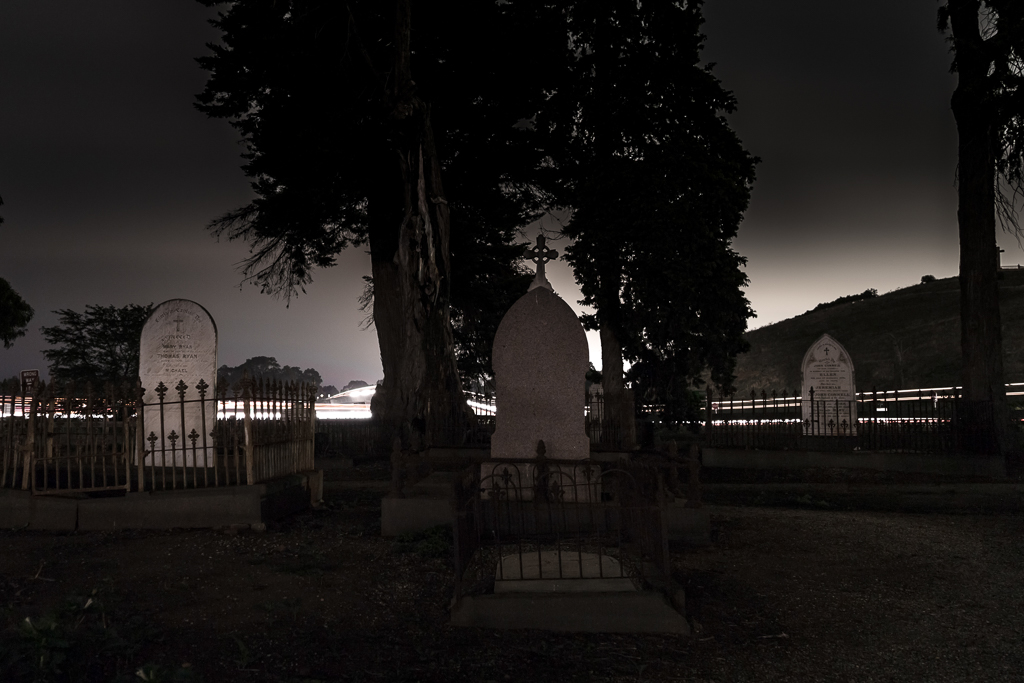 With wild variations in available light. 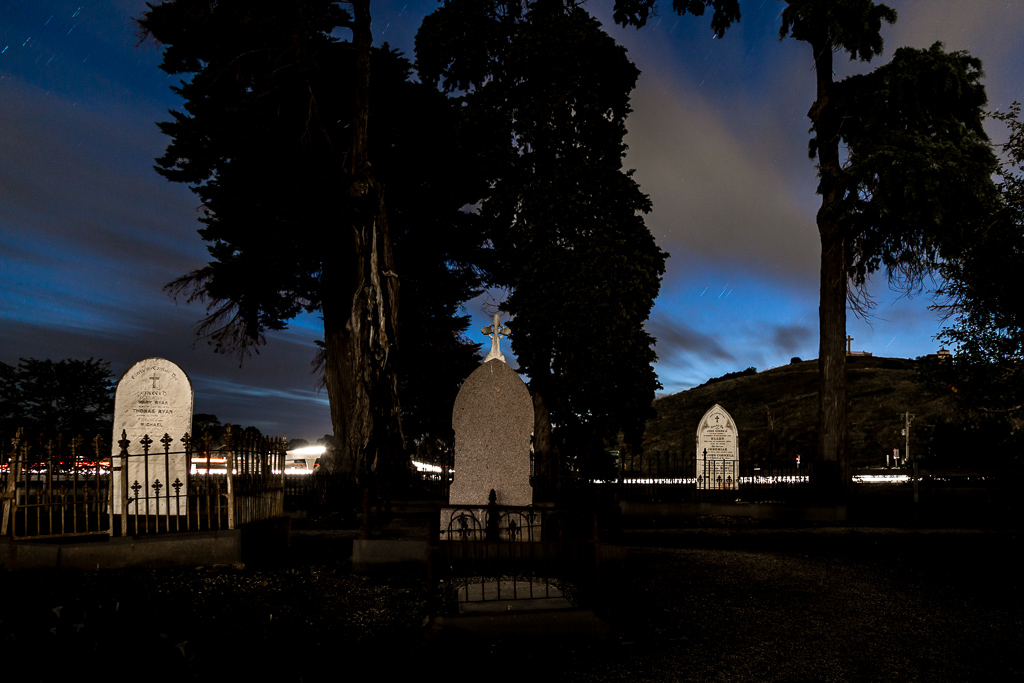 There’s one which stands along and is always lit up by the surrounding roads. Hopefully I’ll get back there on the right type of night and get some more shots. Oh, it’s on a lean. Don’t blame me for it being tilted. 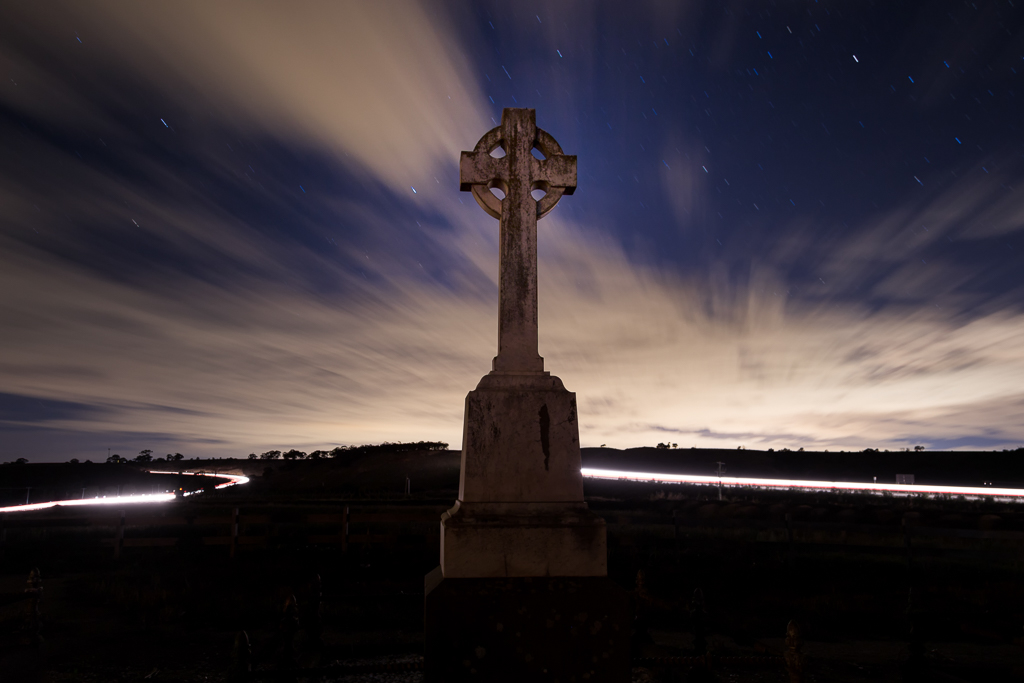 Oh yeah, I hope you worked out what song the post title came from without resorting to Google? I should offer one of my ‘special fiasco foot massages’ to accurate guessers. I have a special technique which involves extreme use of the thumbs, copious baby oil and a wooden spatula. It’s a winner.