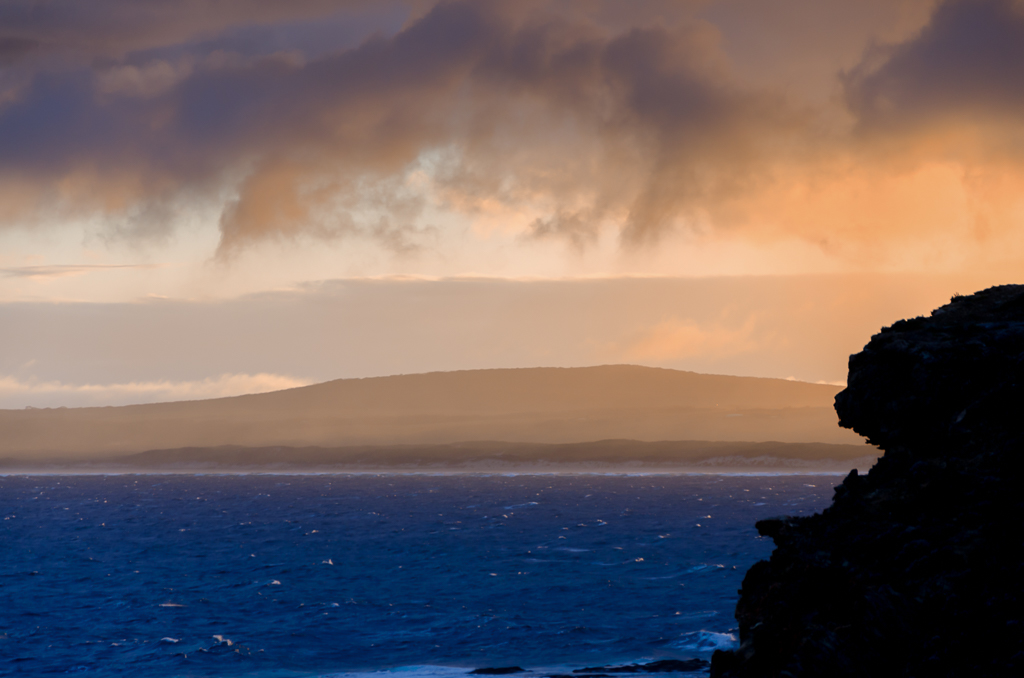 Guess what I just heard? Whilst watching an extremely dubious documentary of a place being haunted, I picked up two things of interest. One, it was narrated by a bloke with the deepest voice I’ve ever heard. I guess he was trying to sound spooky? The trouble is, he went overboard and ended up sounding like Lee Marvin talking at the bottom of a well with an anvil tied to his testicles.

Secondly, some other bloke who’d been haunted said, “…cold air suddenly appeared and I was breathing smoke on my breath…” Huh? What is he? Some sort of dragon? Surely he knows it’s steam on his breath and not smoke? I hope. Anyway, I love ghost shows, yet they’re always disappointing as everyone in them seems, well… insane.

Anyway, back to walking. I’m officially on the final run home for posts regarding this hike from last winter. It’s taken a while, but it’s almost done. This is an easy one to write up as well. A 15 km stroll from the Springs to Trewalla following the coast was quite relaxing. Oh, plus there was a cafe on the way.

Except for the first few hours, where our faces were being torn off by howling winds bringing heavy, skin shredding showers.

I mentioned previously that the Springs camp was my favourite of the walk. It was the same for Smuffin, as his traditional daily food drop had a bottle of red wine in it. Upon arriving at the camp he furiously tore off the duct tape sealing the container, threw the food aside and then with an enormous guttural roar of victory, held aloft the bottle of red wine in one hand. In fact he looked a bit like Perseus holding the head of Medusa in the painting by Luca Giordano. 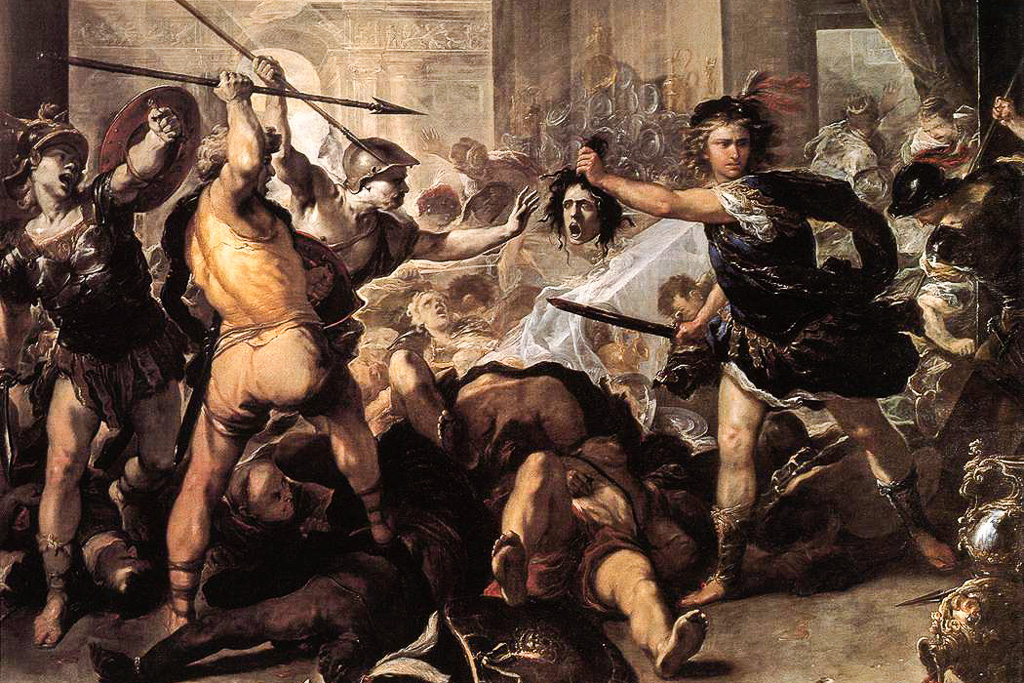 Smuffin’s happy with the days outcome. The other hikers are not so sure.

Smuffin was set for the evening and it wasn’t too bad a night with only the occasional shower passing by. Dawn though, brought ominous dark clouds that swept quickly over us, made even more so by the use of black and white, which is officially classified as ‘moody 101’. 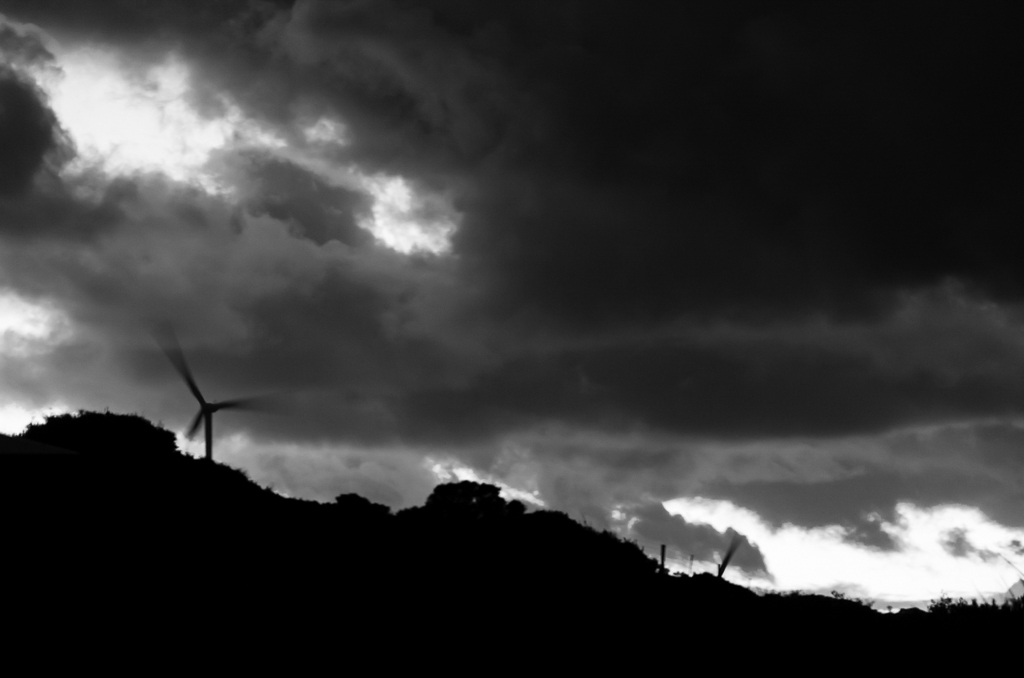 Before heading off, I made a sprint to the cliff-tops to capture a colourful sunrise. Fast moving, low clouds created the fantastic light in the photo at the start of this post. A bird in the distance, facing into the wind was successfully holding station above the cliffs… 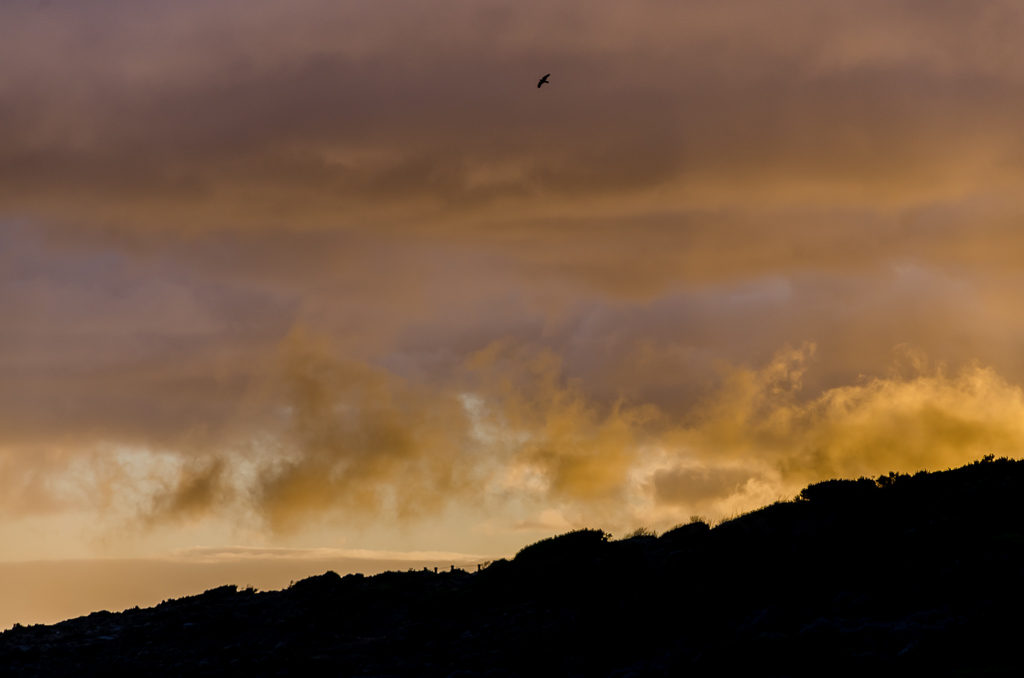 …and I stood long enough to capture a few more pictures. 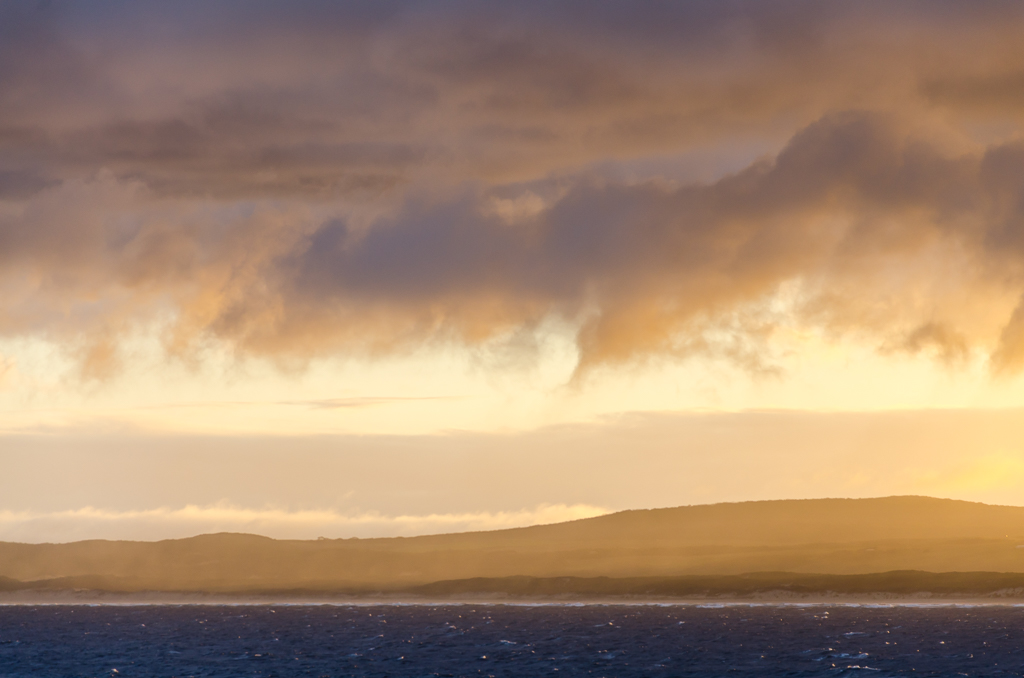 Once the glow was gone, we kitted up and were ready to go when possibly the heaviest shower of the day came through. Luckily for us we had the shelter for protection, so we put our masculinity on hold and sat it out. Not that it made any difference, as within minutes of setting off we were getting wet. I’m sorry to say, but the DSLR went into the pack and I pottered along with a compact during this section along the cliff-tops. Maybe I need yet another camera? Maybe a weather resistant DSLR? Something like the Pentax K-5 II? I’m a sucker for a new camera system.

Anyway, there isn’t much to present to you photographically, although I did capture a car container ship pushing through the choppy sea. 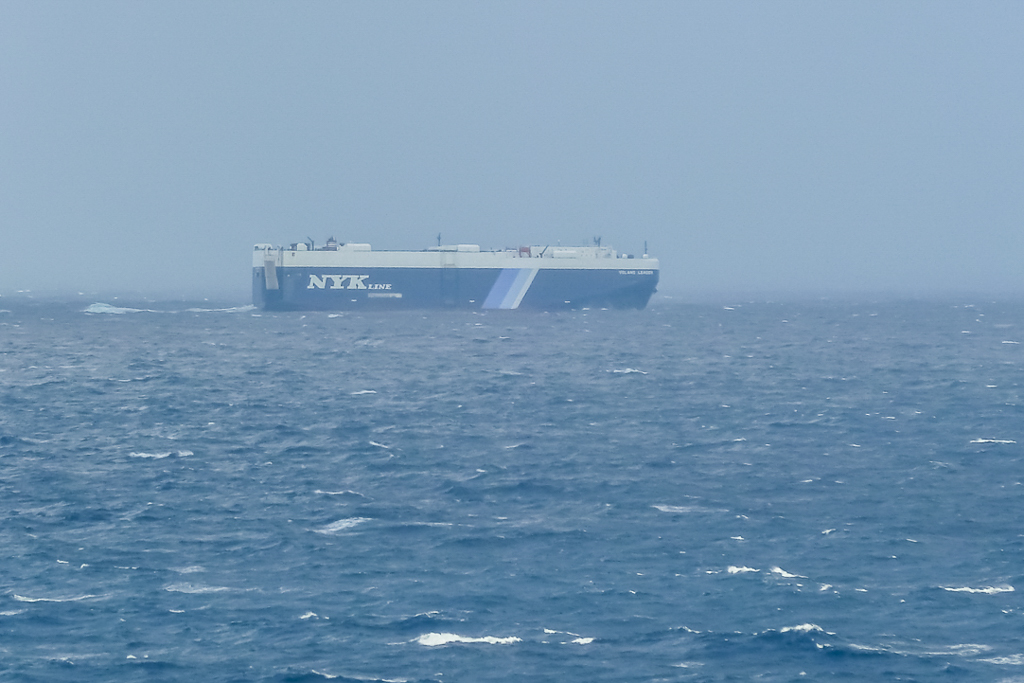 By the way, I needed to know what that ship was, so I spent about half an hour researching on ‘Merchant Ship Info’ (I love how the internet can have a site on such things) and have identified it as the ‘Volans Leader’. I do have a working ship fetish along with suspenders hiking.

We plugged along passing the odd lookout and as showers swept by the subsequent sun created vibrant rainbows. I’m not sure what happened in his childhood, but Smuffin’s a certified, rabid ‘rainbowist’. Every time I took a photo, he’d be hollering and waving his arms about, “It’s just a rainbow!! Exactly like all the other ones!!” I’ve never heard such rainbow angst before and especially against the ones on this day, as they were so insanely colourful and close. I wanted to grab one and considered diving for the pair in the next photo, but decided against it. 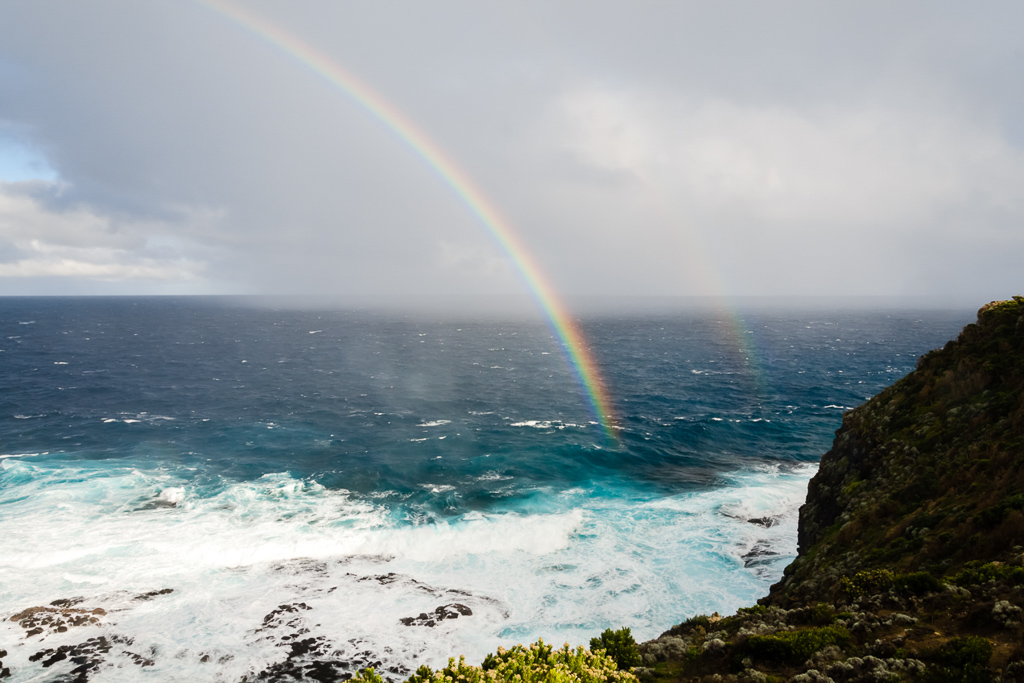 The coast may look isolated, but only a short distance away is a whopping big wind-farm. I thought if the wind was blowing hard, then the blades would turn quicker? That’s not the case at all, which means it’s time I bone-up on my wind-farm knowledge. 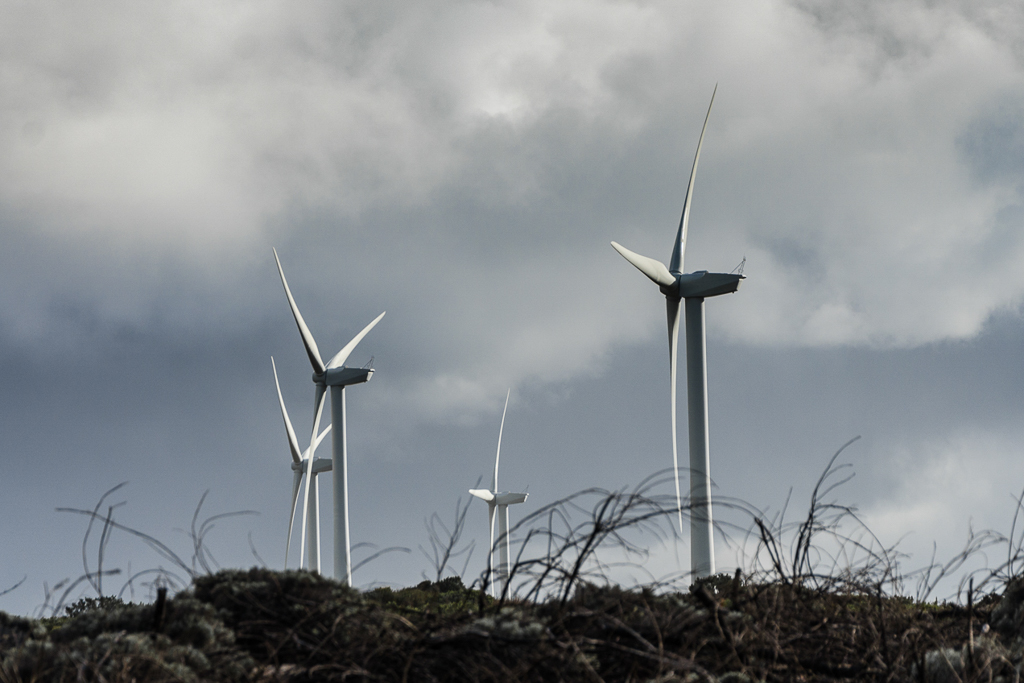 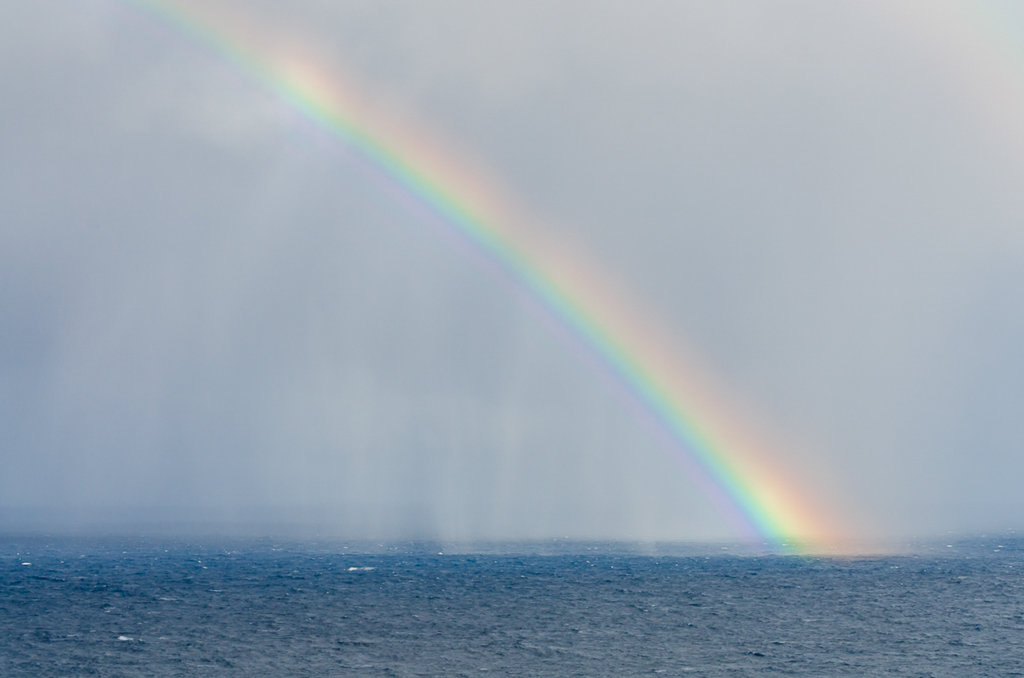 We left the wind-farm behind… 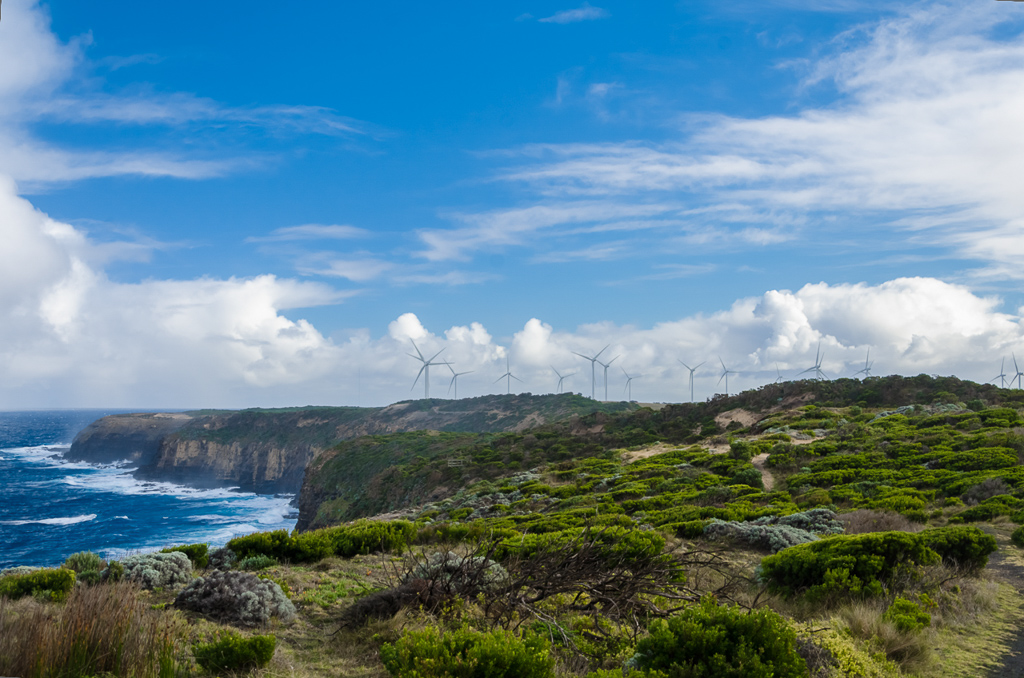 …and continued on whilst the constant bands of bright colour came and went. Check this one out. Again it looks like it was five feet in front of me and it’s obscenely vivid. These really are physically aggressive rainbows. 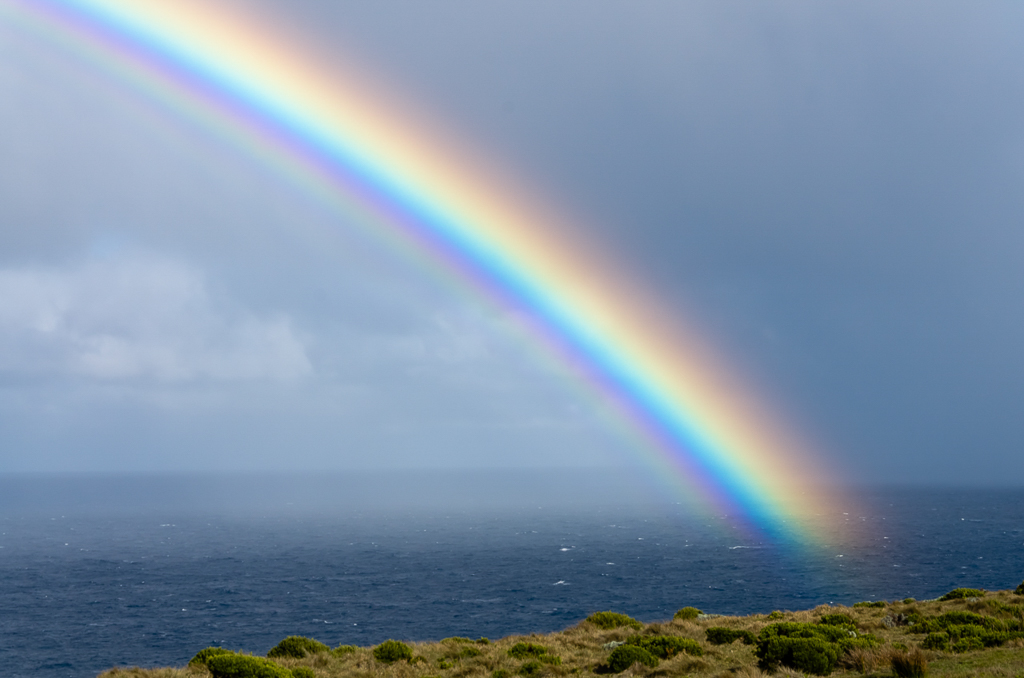 Some distraction was needed from the blinding colour, so we stopped for a breather at Seal Cove. Hopefully I don’t have to explain what was there? Way down below, dozens of seals were lolling around in the water, but recording them was a bit tricky. I took about 20 photos with my insufficient zoom lens that resulted in vast stretches of ocean with small black dots in them, which although were seals, could quite easily be misidentified as lumps of seaweed. The best I could do to prove I actually saw any seals, is the next picture. Mind you, I’ve cropped the photo to death, which explains why it’s so soft and ordinary. 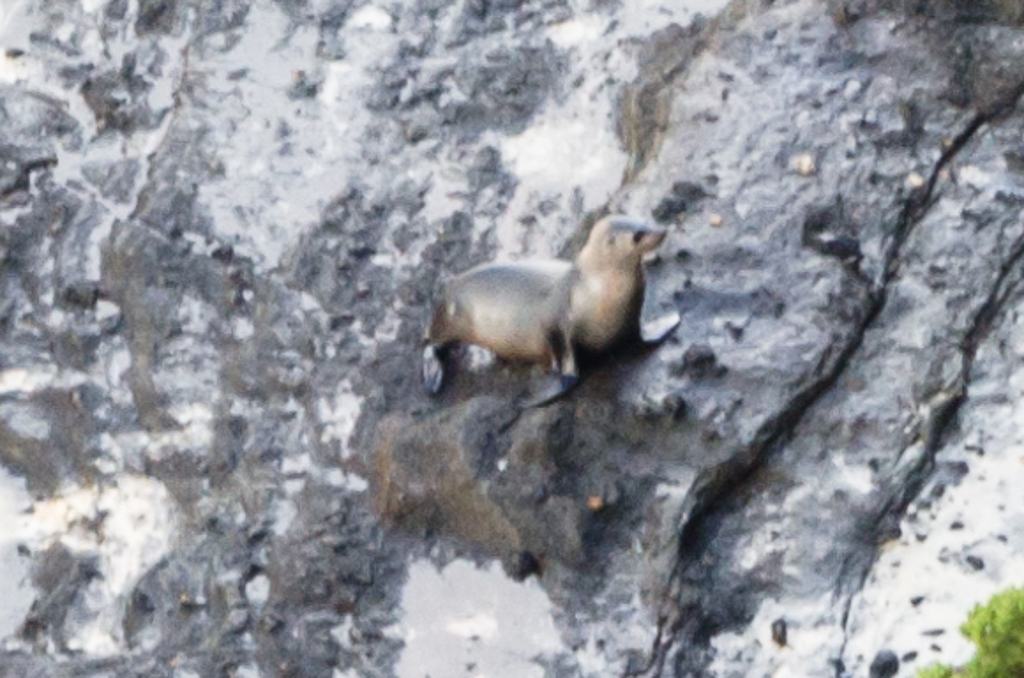 Pretty average isn’t it? Well, it could be worse, as here’s the same photo uncropped. Can you spot anything? I can’t, as I’ve mislaid my portable Hubble telescope. 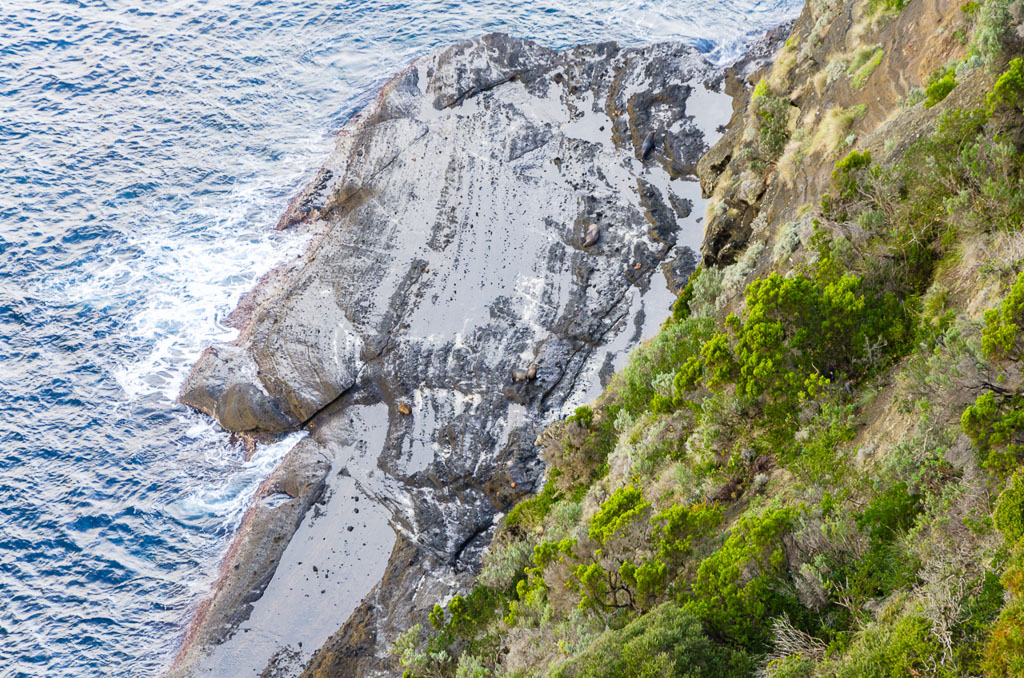 Trust me. It’s the same photo.

This next section is quite interesting, firstly Bridgewater Bay had a fantastic azure look to it, with the wind whipping across the water… 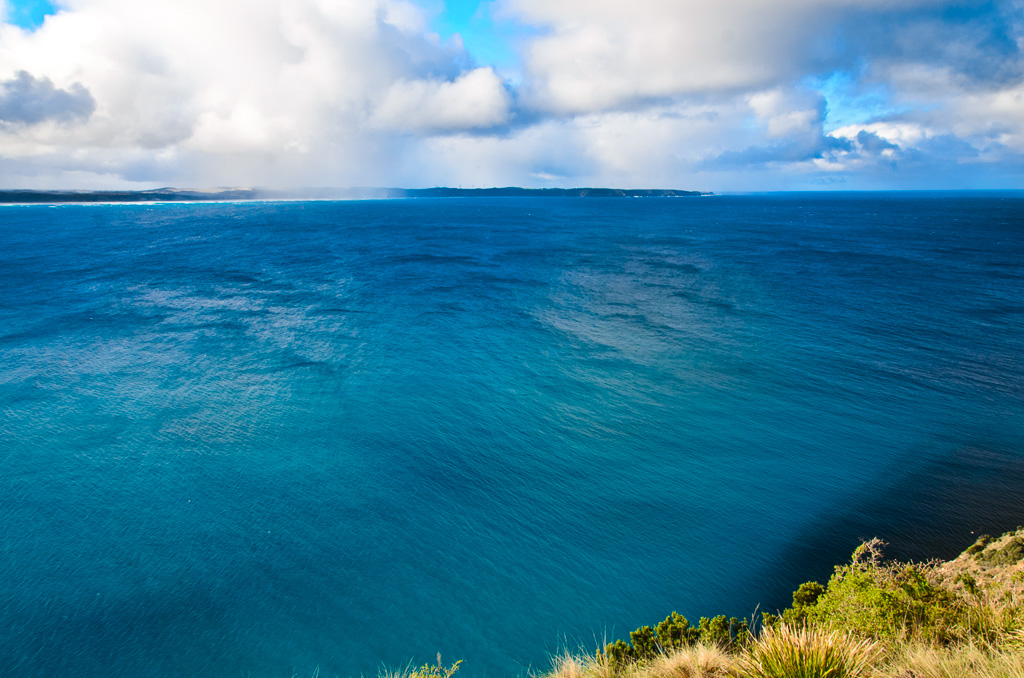 …and it’s also the spot of the highest coastal cliff in Victoria. It was our only real climb of the day and Smuffin let rip with his special hiking technique. Flat out until stopping, and then spending about five minutes with hands on knees trying to suck in some oxygen. Here’s what I mean. 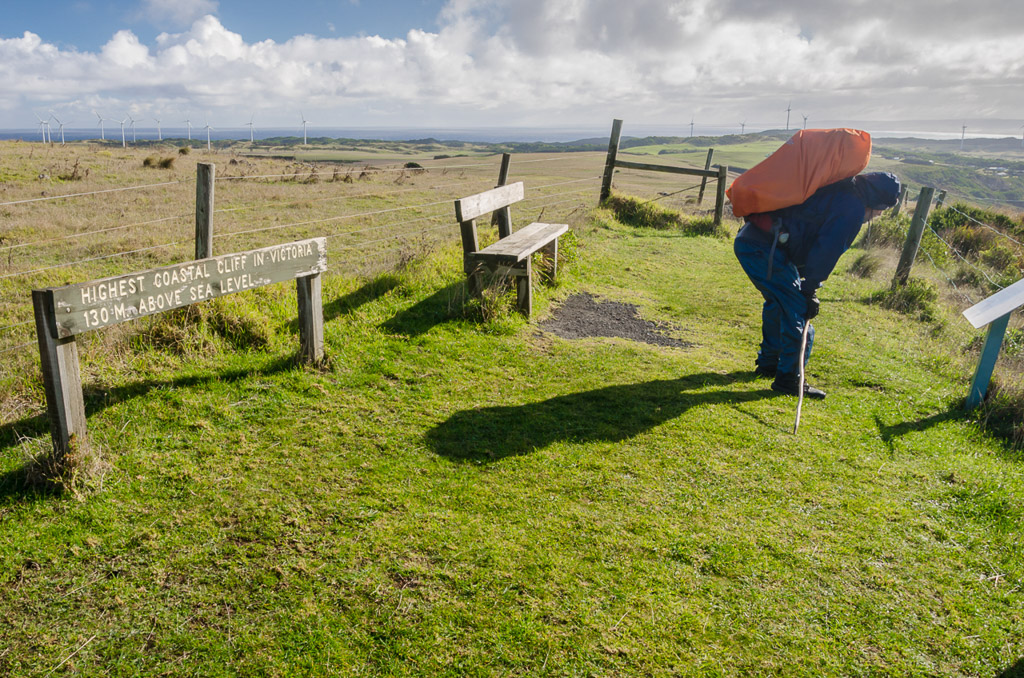 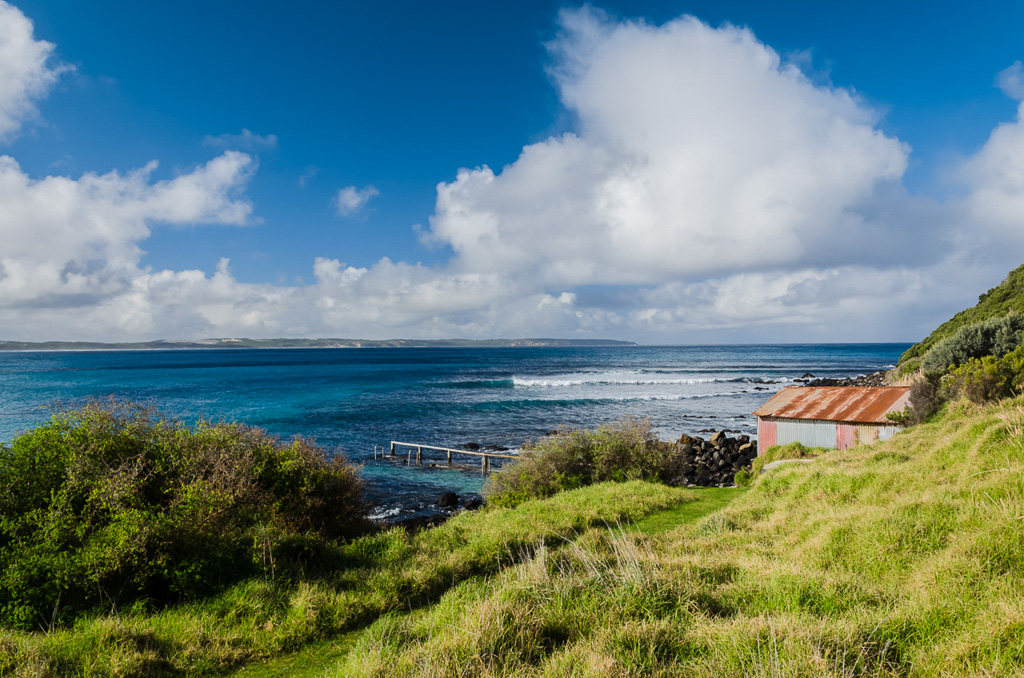 …and unfortunately for us, rose quite a height again. At least it was another chance to look at the beautiful azure again… 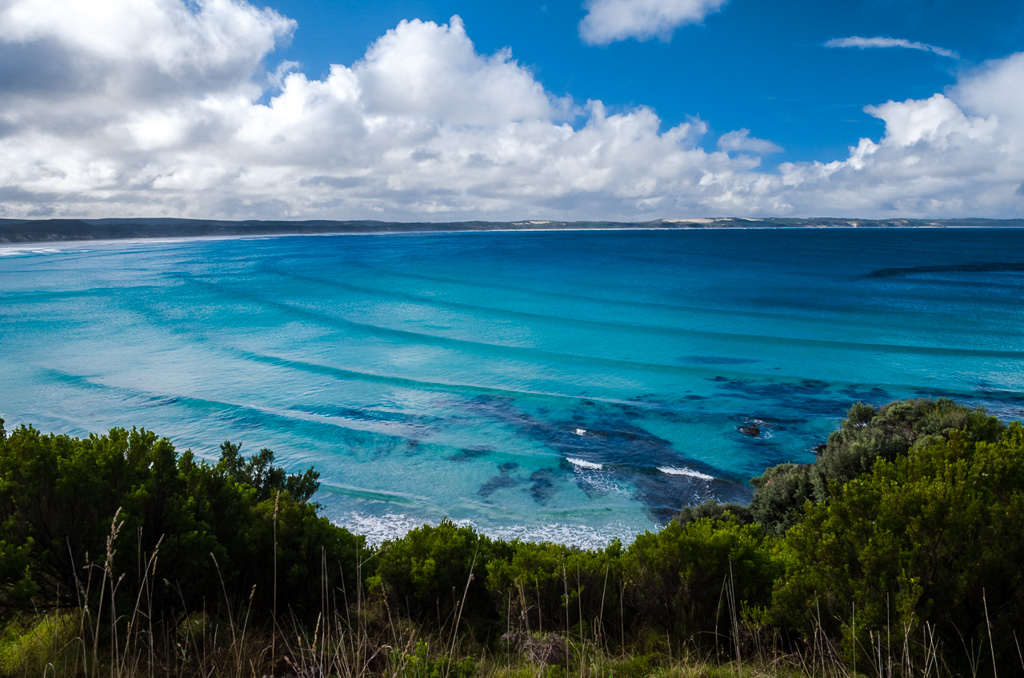 …before arriving at the Bridgewater Bay café. If you look at that link, it gives plenty of overhead photos of the area. After a week of walking, it’s absolutely magnificent. I intended to take photos of the different dishes I ate, but upon ordering I slipped into some sort of caveman mode and didn’t even get the camera out. There’s no way in the history of mankind has anyone eaten as much as I ate at that café. Luckily there were no babies or animals within reach, as I would’ve eaten them as well. Maybe that’s where the camera went?

We rolled out of the café and continued on with only a few more kilometres to Trewalla camp. There was some beach walking… 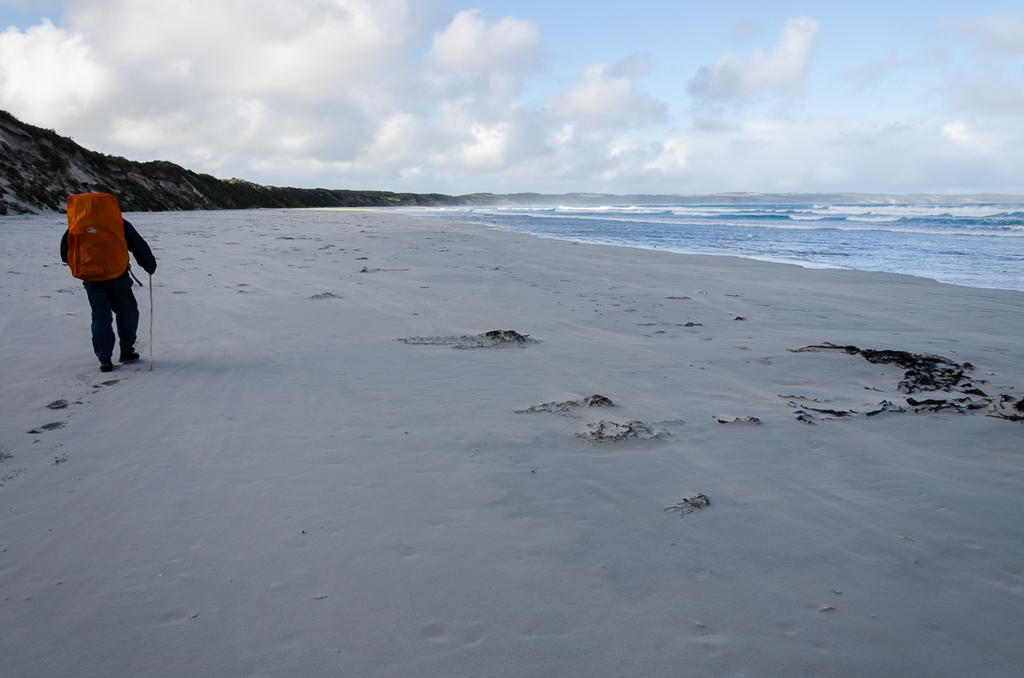 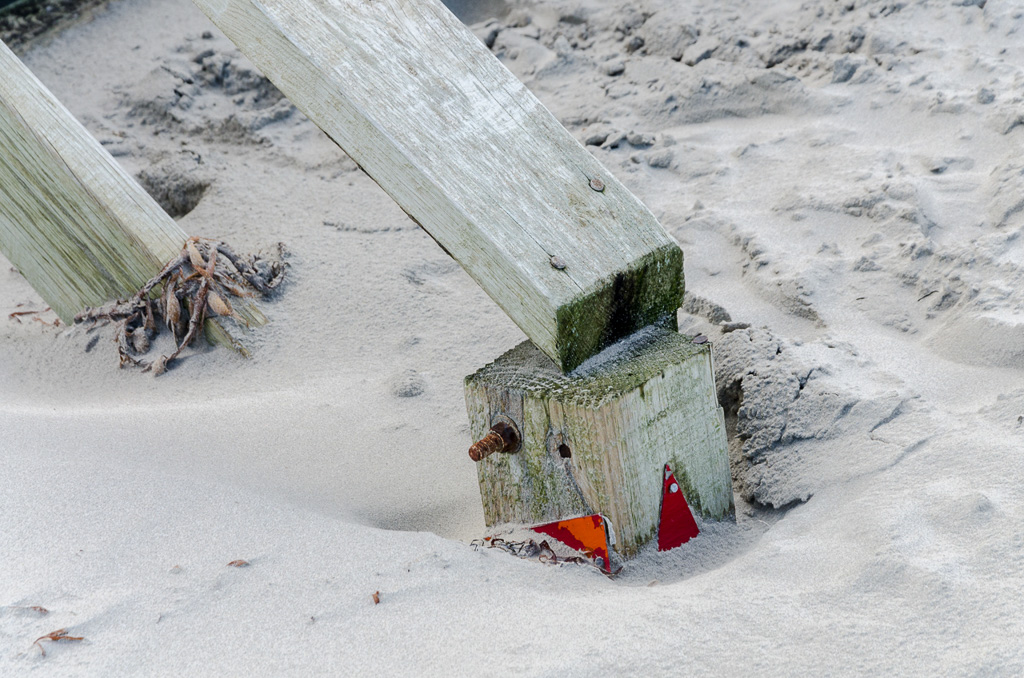 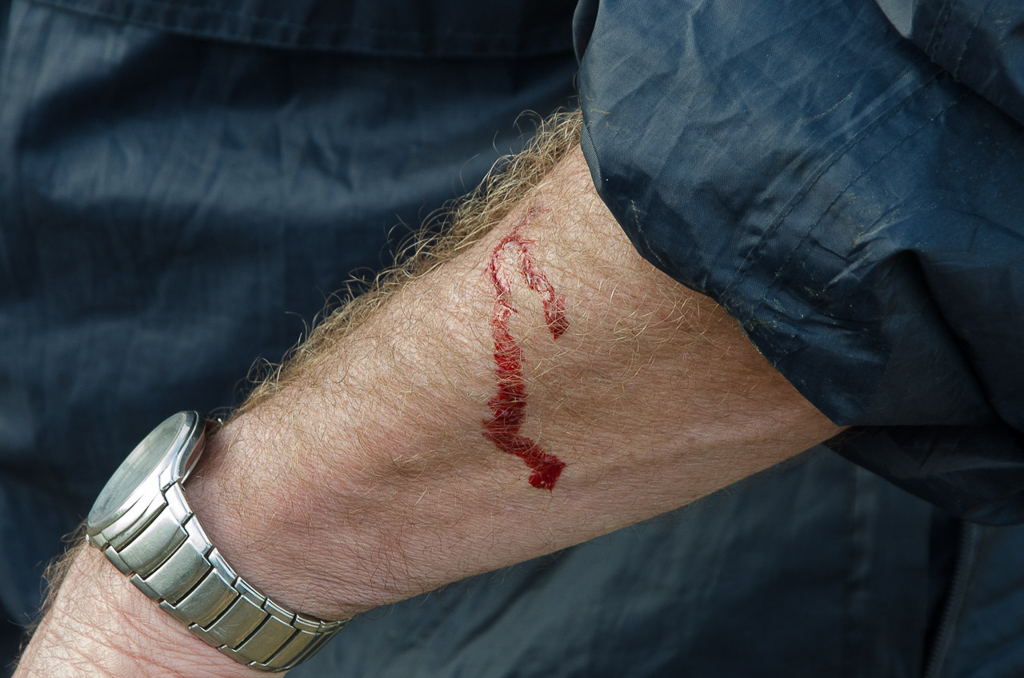 …and just for something different, a rainbow appeared. 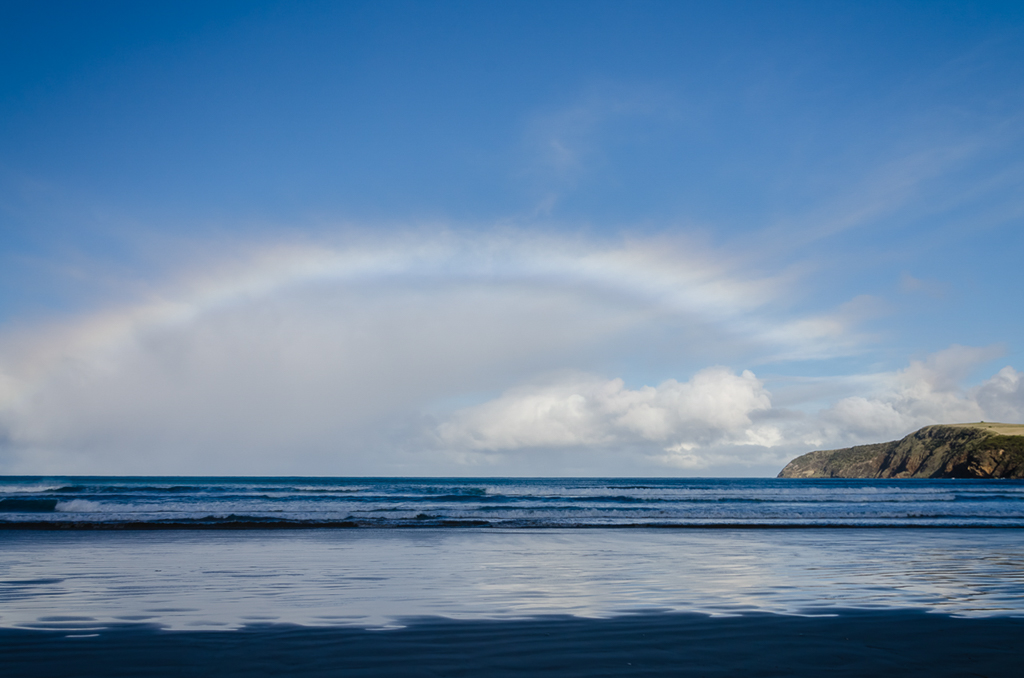 A short climb to the dunes behind the beach and then along a winding path, was a chance to view the area we’d walked a few hours earlier. The highest Victorian coastal cliff was now in the distance… 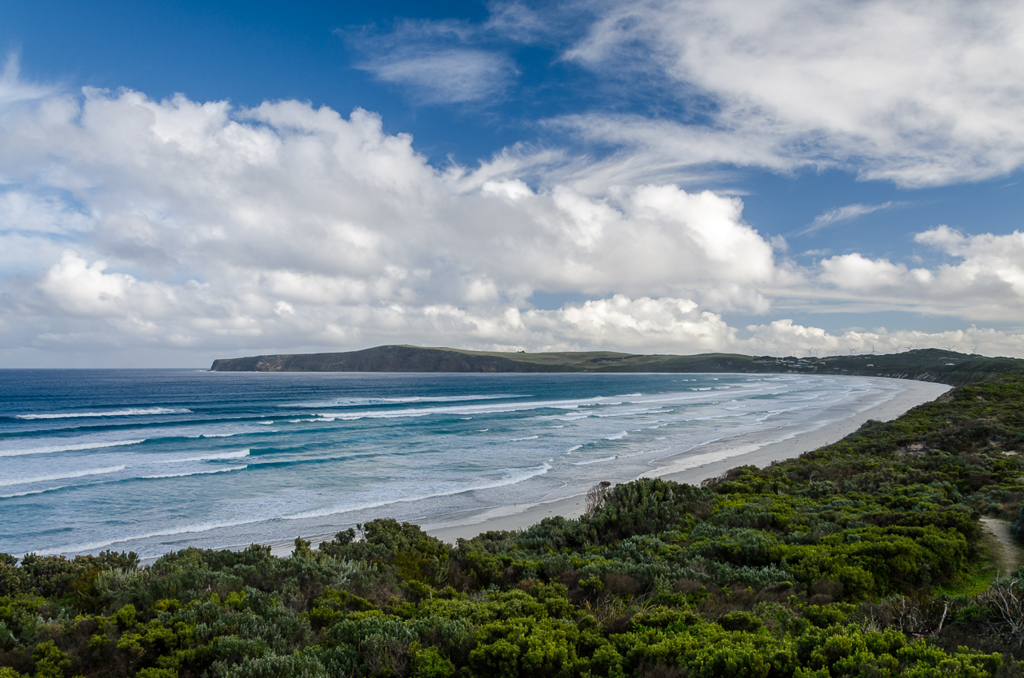 …and light was beginning to fade. 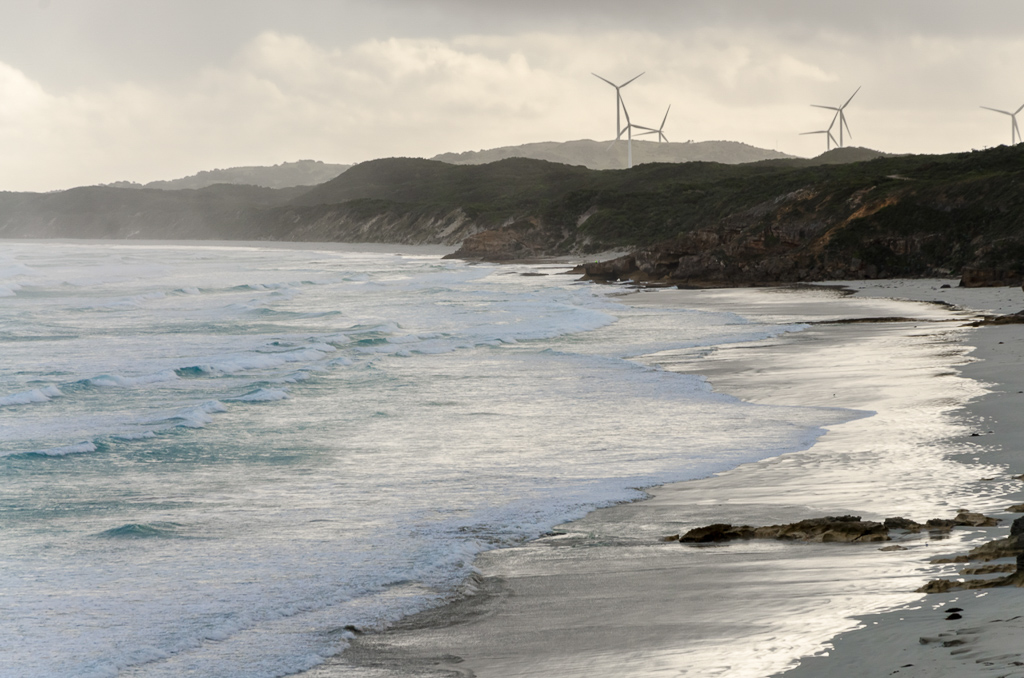 The Trewalla camp was reached shortly after and again it was a pretty good one. Tucked away in the teatree and protected from the wind was all one can want in a camp. There really wasn’t much more to do than watch an interesting sunset… 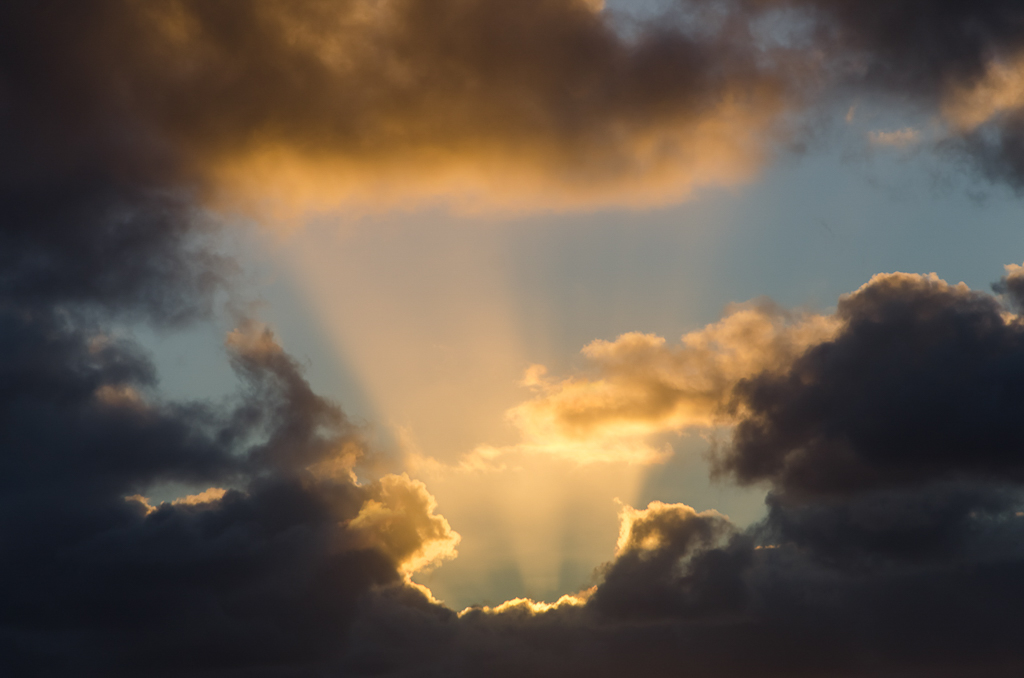 …before the light faded with the moon rising. 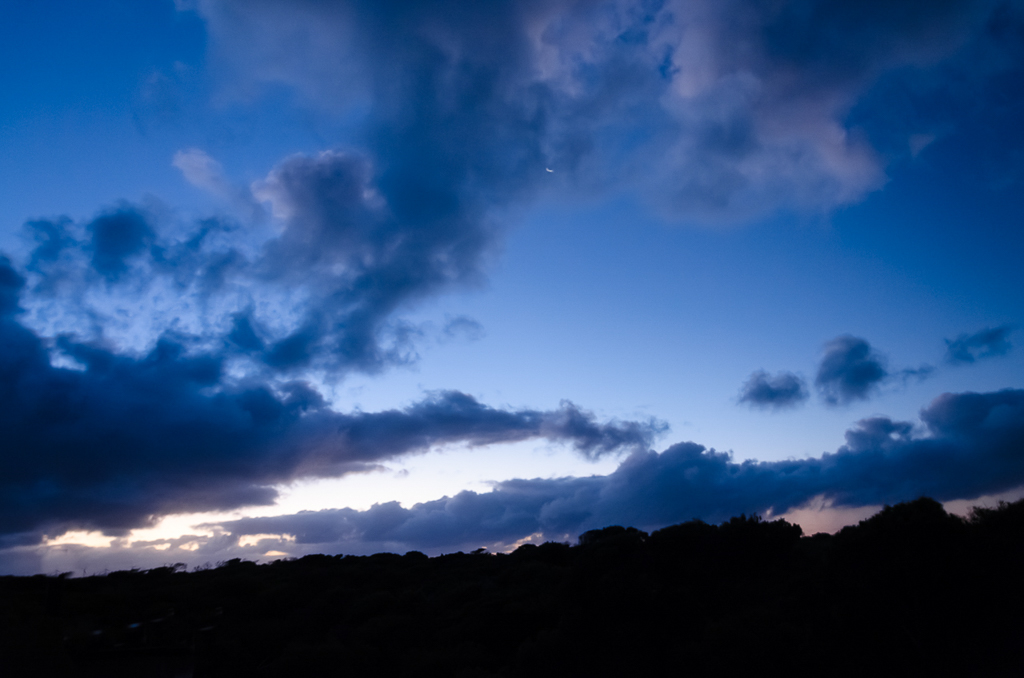 That’s it for another day. Only two more to go!!