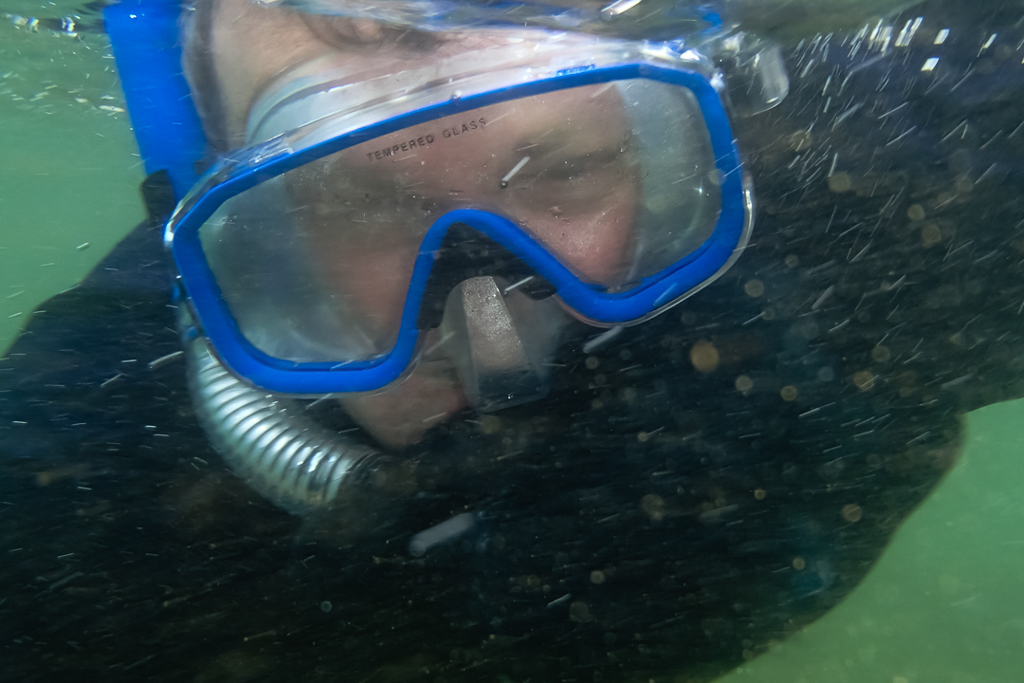 I know you’re all eagerly awaiting the next instalment of my Great South West Walk saga, but I’m afraid you’ll have to wait until I do some blog cleaning. As you can see by the photo above, I haven’t been doing much hiking, but more on that in a minute.

Firstly, do you notice the badge on the page? If not, then I suggest getting your Coke-bottle glasses checked out. Anyway, I’m in the running for the Australian Writers’ Centre, Best Australian Blogs Competition, so that badge will stay there until I win absolutely nothing and then I’ll throw it to the crapper.

As part of it, I’m entered in the ‘People’s Choice Award’ which begins on 28 March for my post ‘Hoarding House Cleaning 101’. What? Did you think I’d have a hiking entry? Are you crazy?! Anyway, once the voting starts I’m going to have to beg for votes which goes against every humble bone in my body. I’m a crap groveller, so maybe I can give incentives? For votes, maybe I can offer special limited edition ‘Hiking Fiasco’ sketches that I’ve autographed? Something like this. 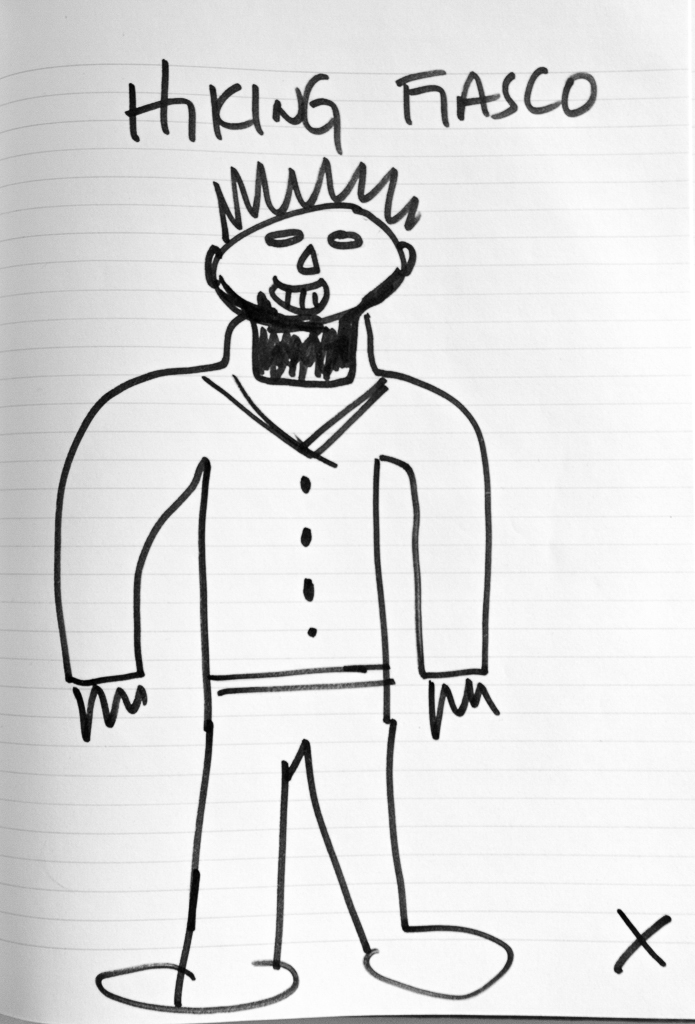 Just in case, the weird object under my chin is meant to be a beard.

You’ve got no idea how long it took me to sign that sketch. Anyway, once that starts I’ll revisit the whole competition-plugging again, as now I’m in it, I might as well give it a go and find out what it feels like to not win something. I can just imagine some powerhouse blog coming along with a swarm of punters destroying everything in its wake?

Well, I’ve been trying to walk, but the Melbourne heatwave flattened me, so how do I keep some fitness? I decided to dust off the bicycle and go riding one stinking hot Saturday a few weeks ago. Other than blubbering from dehydration, things were going fine until I reached a road detour. This detour was quite convoluted and sent me off into a factory area, where microscopic maps were attached to telephone poles every kilometre or so. Whilst pedaling along I suddenly saw a little map and looked across, trying to decipher it on the move. What do you reckon happened next? 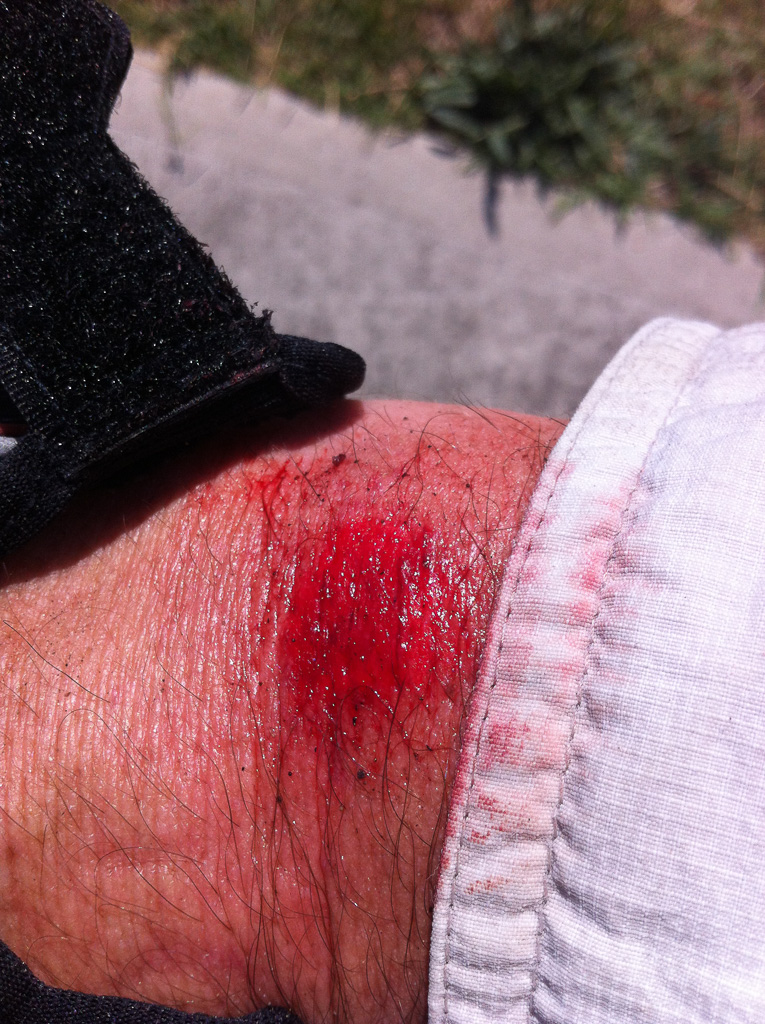 Can you see the blood? Do you want the photo to be a little bigger?

Well, of course I crashed. A six inch high lane divider on a corner took me by surprise. I tried to avoid it, but obviously didn’t and went airborne over the handlebars. Besides losing skin on all limbs, with an especially annoying loss of skin on my wrist in the photo above, I also hit my head-limb on the road. This caused two problems.

One was my neck made a strange crunching sound which I assume isn’t ideal. I like my potato chips crunchy, not my joints. I mentioned in the last post how my neck barely works as it is and I don’t think some extra compression is required. As a result, it appears the neck’s disappeared and now my head’s just propped on my shoulders. Lucky it wasn’t a high-speed accident, otherwise my head may have ended up in my inside my chest. How freaky would that be? The other point is, who says helmet laws are crap? 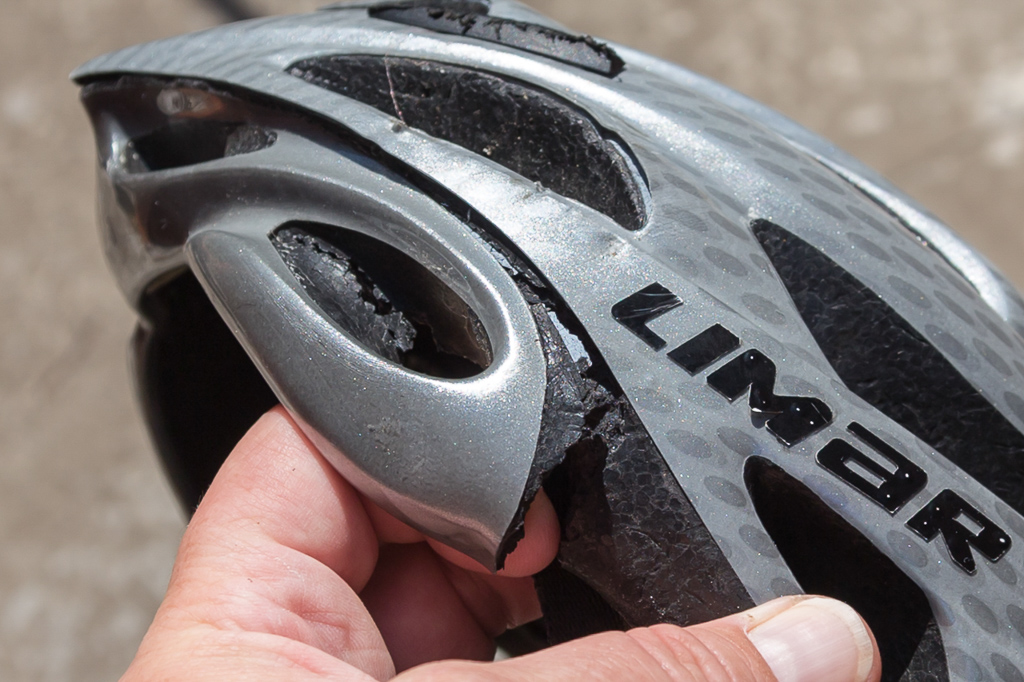 When my head slapped the ground the helmet did its job and absorbed the impact, breaking in the process, but leaving my Elephant Man features in one piece. I managed to limp home after 72 km and decided that bicycling was not the answer for hot weather fitness.

As the heat kept coming, what’s the exercise answer? I guess it’s obvious, as it was time to hit the ocean. Well, not exactly ‘ocean’, but Port Phillip Bay with Black Rock being the destination. Straight out of the car, onto the beach and within 0.7 of a second I was bitten on the leg by my traditional nemesis the horse-fly. The only pleasure I get is their slow speed, where I get to joyfully crush their skulls against my skin. Like this one the other day. It’s also a chance to show off the World’s largest calf muscles in the general vicinity. 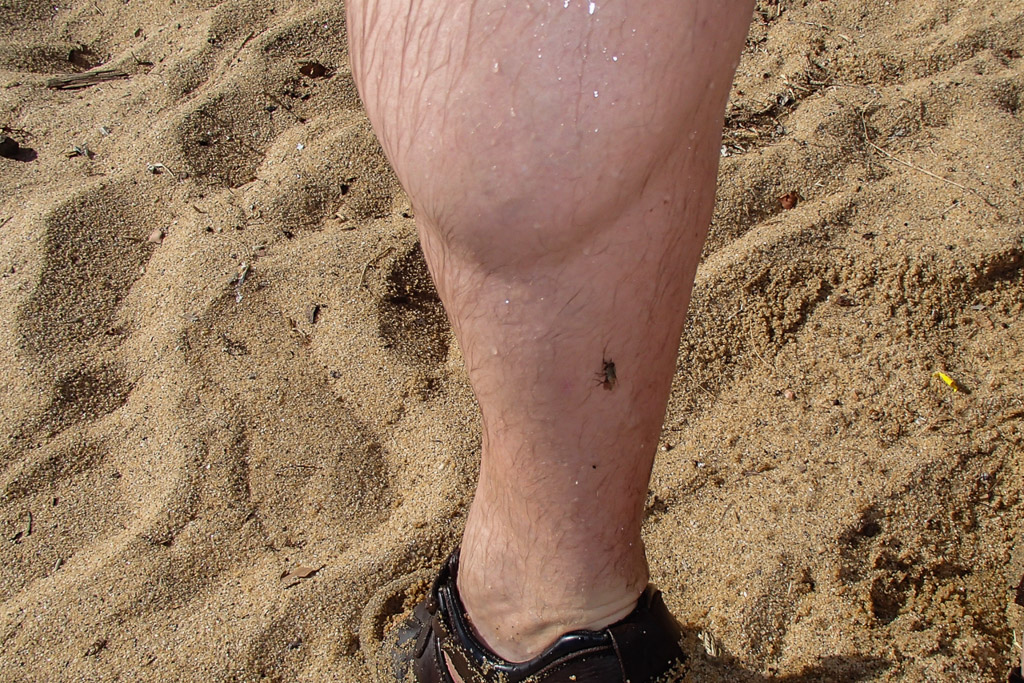 Now fly free, Ben and I hit the water with snorkels at the ready, plus traditional ‘fiasco’ attire. It didn’t seem to work so well in the water though. 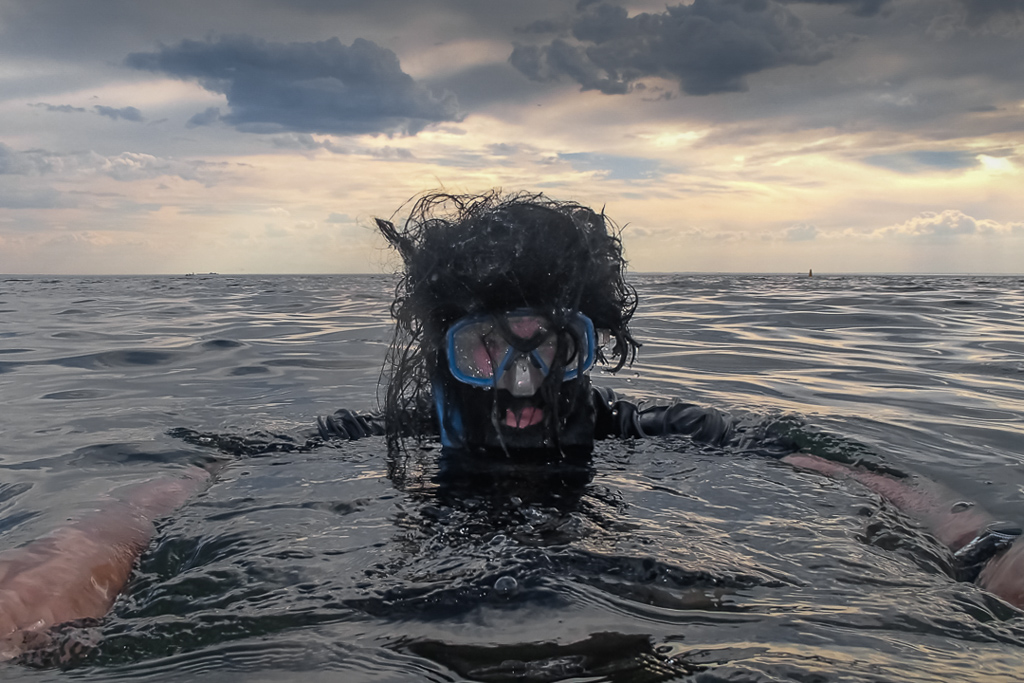 It created some weird looks from shore and it was a bit strange having people lounging on the beach sitting up pointing at us. How can one relax in the water with people looking as if we were some type of monsters from the deep? You’d think they’d never seen anyone snorkelling with an Elvis wig on before. The sunbaking crowd were helpful though, as one created the best quote of the day. Ben was walking back along the beach and lost something along the way. A bloke stopped him and in a deadpan voice said, “Excuse me. You’ve dropped your beard”.

In the end, I think this is the best hot weather training location. Who needs to be slogging up hills covered in sweat when you can go swimming with your wig on instead..? 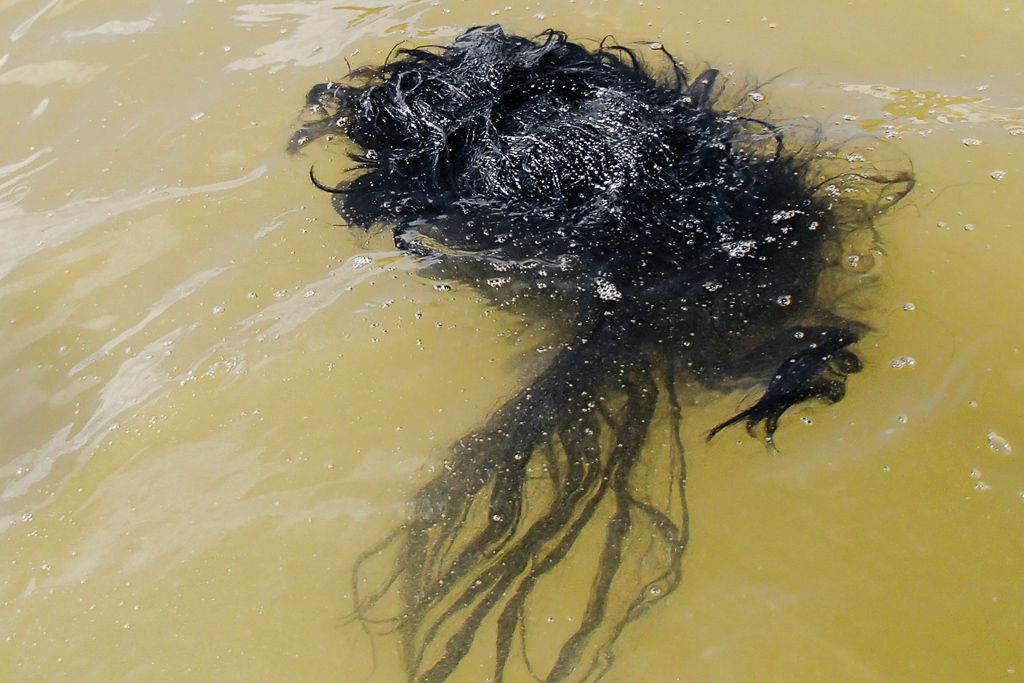