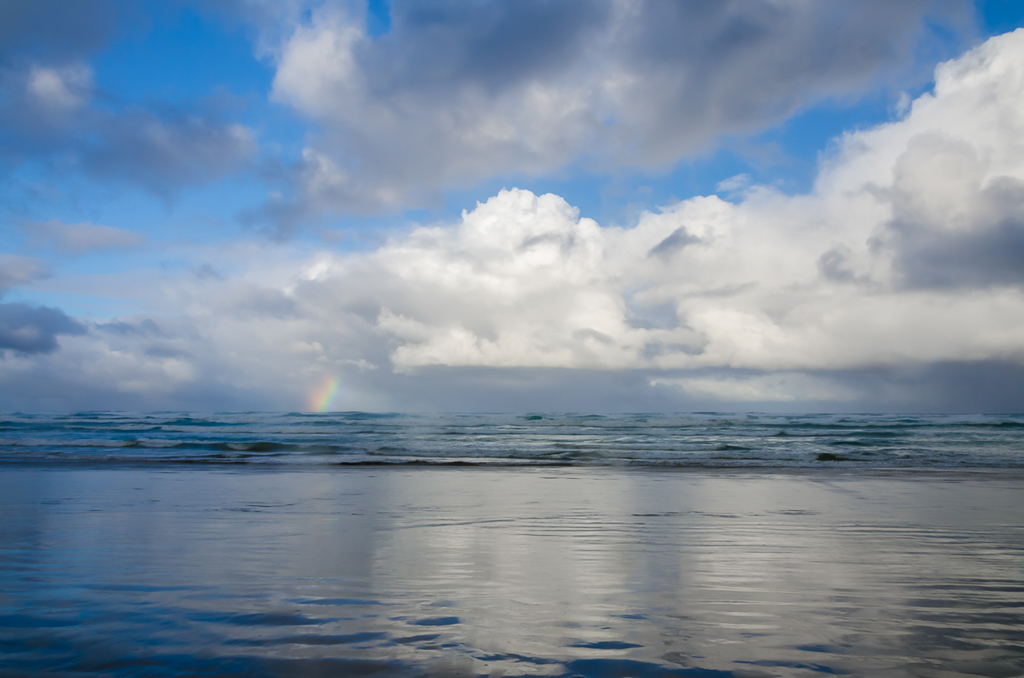 There are many inspirational quotes regarding the outdoors, such as:

“May your trails be crooked, winding, lonesome, dangerous, leading to the most amazing view. May your mountains rise into and above the clouds.” – Edward Abbey.

“Adopt the pace of nature: her secret is patience” – Ralph Waldo Emerson. 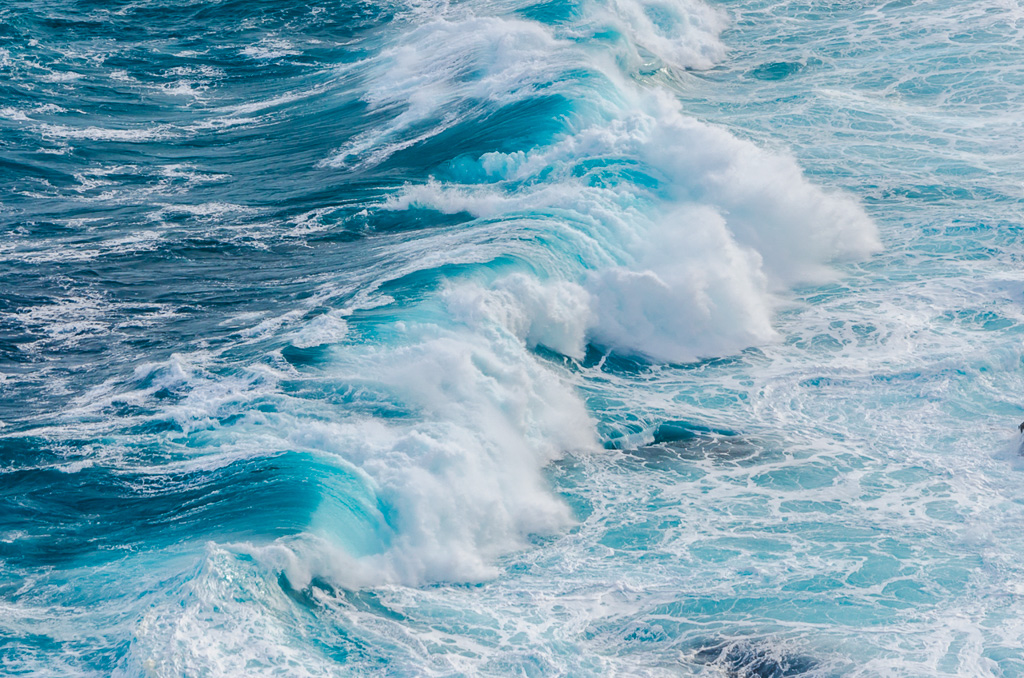 Regarding this trip and the endless posts about it. All I can say is we’re getting there. This entry will cover the 15 km section from Trewalla to Mallee via a visit to the Cape Nelson Lighthouse.

It was the second last day of this hike from the previous Winter and it started out like any other. Cold, showers were around and beach walking had to be done. Mind you, I thought the trudging on sand was all over for the trip, until my long suffering hiking sidekick, the Smuffin, informed me there were another five kilometres on this day. I was feeling confused,

“Are you nuts? The first few hours are on the beach. How come I know this, yet you’re the one with the map?”

If I’m aware that something is coming I can psych myself up for it. This sudden mentioning of energy sapping sand-slogging, left me with a combination of thoughts from suicide to the Karma Sutra and then back to suicide with a bit of self-flagellation thrown in for good measure.

Smuffin’s not one to be left without the final word, 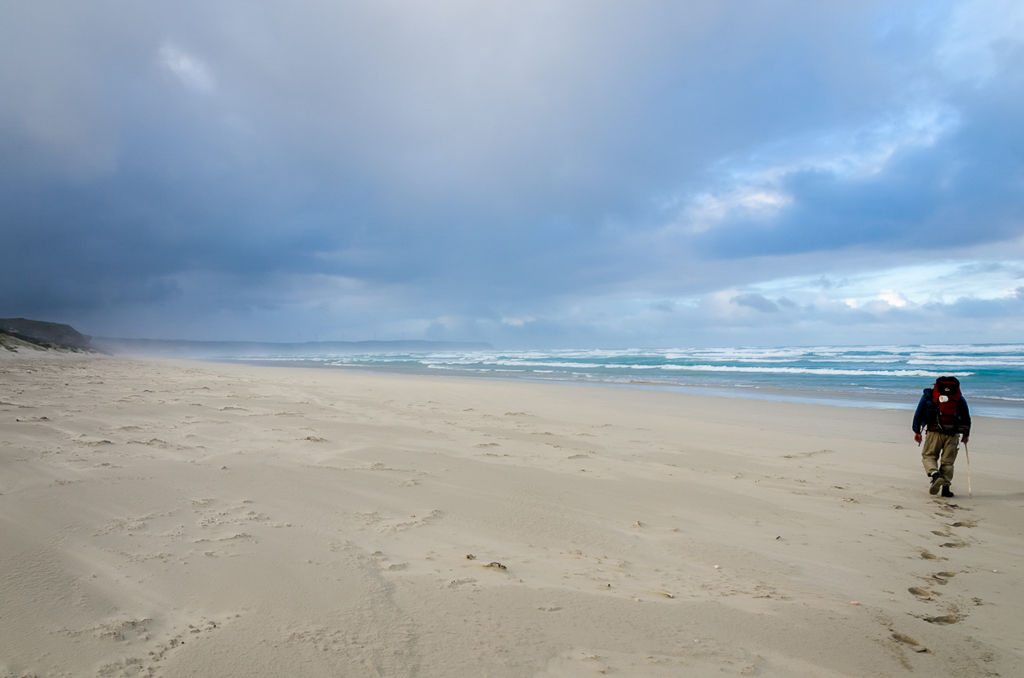 So, down to the sea in boots we went. As soon as we hit the sand, there was a certain familiarity about the beach. It was soft, showers accompanied with rainbows passed by and the wind was blowing a gale. At least it was a tailwind though.

There’s some advice for anyone wanting to hike the GSWW. If you walk it clockwise you’re completely bonkers. The prevailing winds are south-westerly, so by following the mentally unnatural anti-clockwise method, you’ll be assured there’s no skin-shredding sand in your face. You’re also guaranteed in retaining your toupée, rather than having it torn off and dispatched to the Southern Ocean. Why would you want a seal to be the proud owner of your expensive rug? 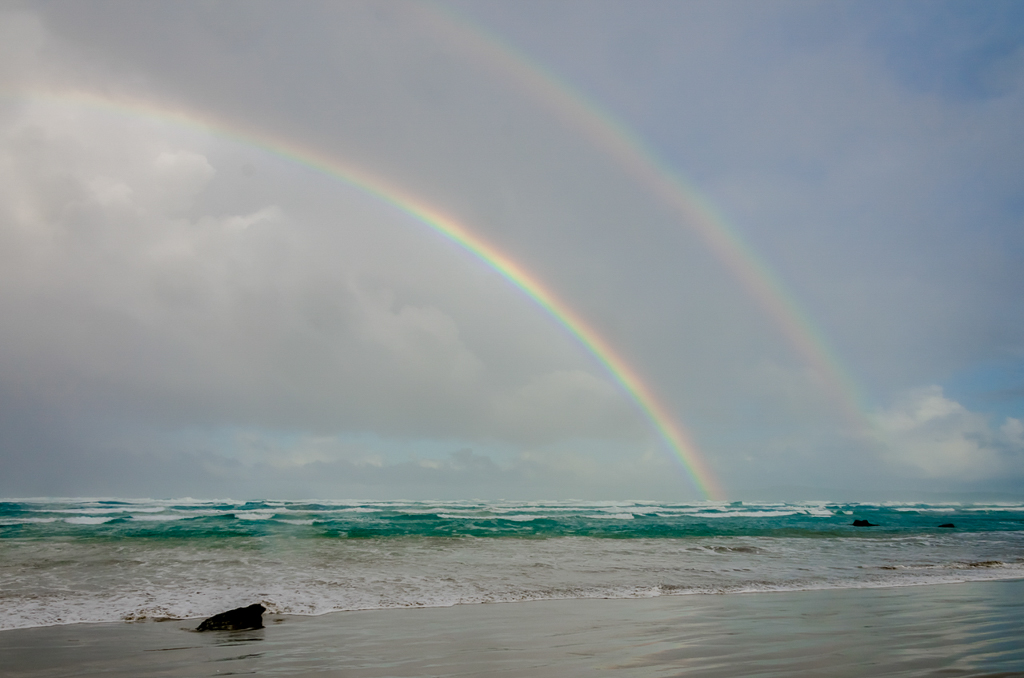 Some of the showers were heavy, so the camera was in and out of the pack. It did come out though when something biblical appeared on the horizon. 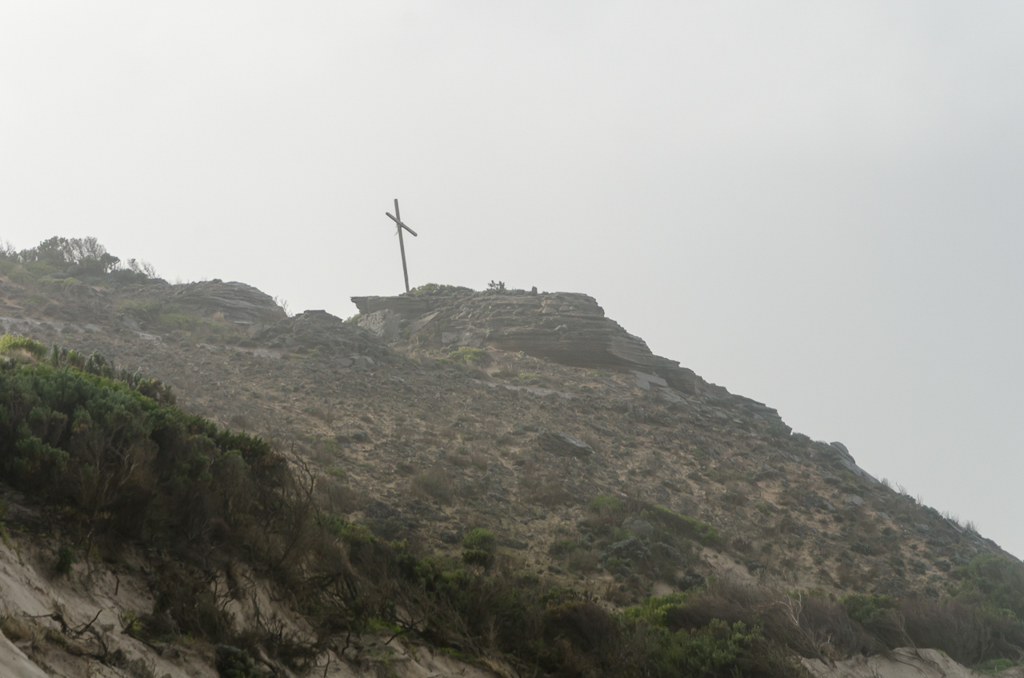 The cross was quite high on the rocky dunes and I had a few questions about it. Smuffin wasn’t interested, but I wanted to know if it was there for a reason. Maybe it’s a particular memorial? Is it just a random symbol of Christian mythology? Is it a landing marker for the return of Heaven’s Gate?

Examination from the waters-edge was insufficient, so I headed up for a closer inspection. Little did I know it was going to be one of the harder climbs of the day. Soft, foot swallowing sand combined with equally fluid rocks meant I’d arrived at my target with a beetroot coloured face and a sweat-soaked brow. What did I find?

Actually, not much. Someone with a bit of dedication had dragged enormous pieces of driftwood to the top of the dunes and lashed the cross together with pieces of rope. I must admit the view was great and this would be the perfect photo, if only I’d framed the cross into the picture a little more. Oh well, perfection remains elusive. 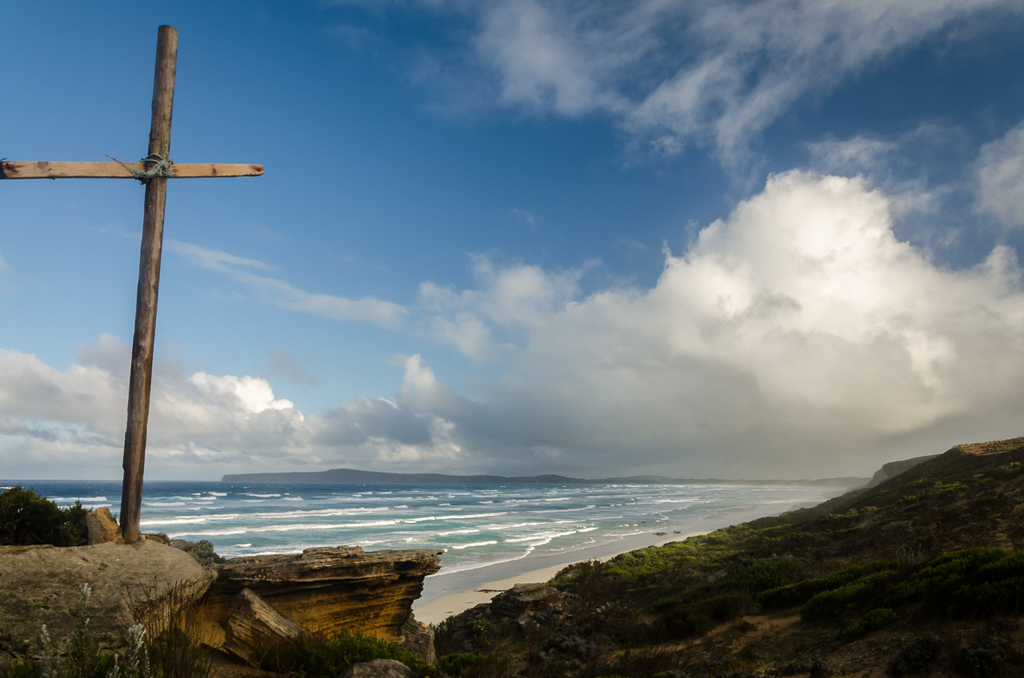 During my exploring, Smuffin was busy down on the beach. The weather had created a dilemma for him. Frequent showers meant he didn’t want to get his pants wet, as they needed a decade of thermonuclear fusion to dry them. So, he’d put his overpants on, which essentially were mobile hothouses. Keeping the rain out, but creating a tidal wave of sweat that soaked his pants anyway. It was quite a conundrum, but he’d come up with a solution whilst I was crawling around looking at crosses on cliffs.

He decided to dispense with hiking trousers and wear overpants only. This was a controversial decision, which had to be discussed,

“Really? You do realise that the problem with taking your pants off and only wearing overpants, is that your overpants are no longer overpants, but are now just plain ol’ pants instead.”

“Not really. I’m wearing underpants which are technically pants, so overpants are still the correct term.”

This had me thinking and I wasn’t satisfied with the response,

Smuffin was wilting under the grilling and declared, “Face up to it. Pants are pants, no matter what terminology you use.”

It was a struggle, but that’s what happened. No pants, but overpants only was the method and there’s more to come regarding this later.

We moved on, trying to stay near the harder sand at the waters edge. A couple of Pied Oystercatchers had the same idea. 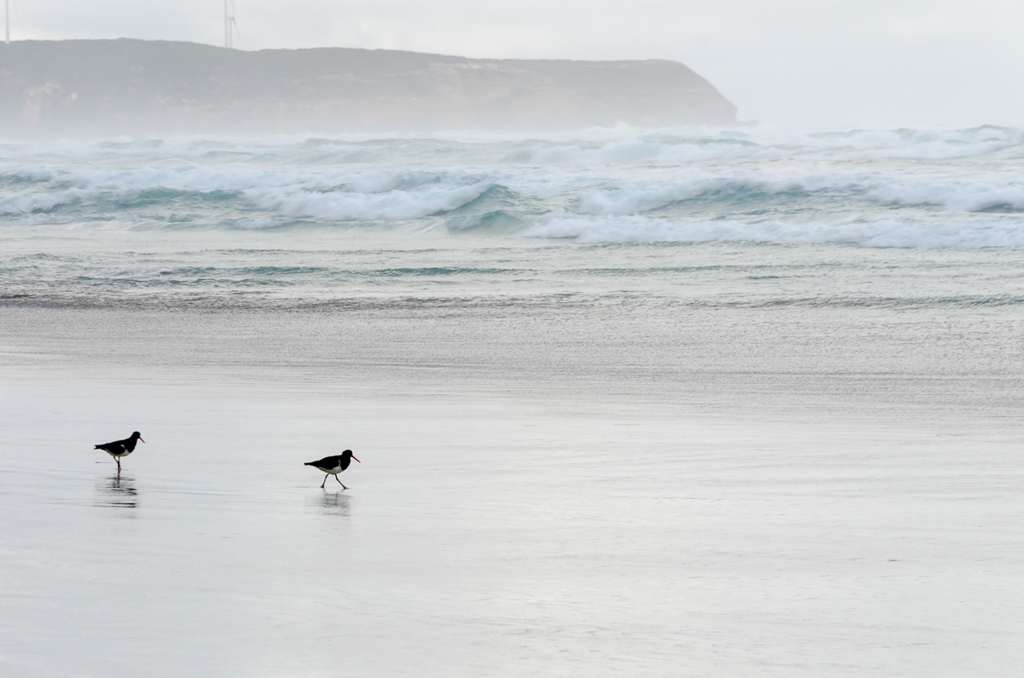 Finally the beach came to an end at a rock outcrop, which necessitated climbing to the top of the cliffs via a series of timber slats, that functioned as stairs. There seemed an awful lot of them and I’ll make full admissions by saying that after about two I hit the wall, or in cycling terms ‘popped’. 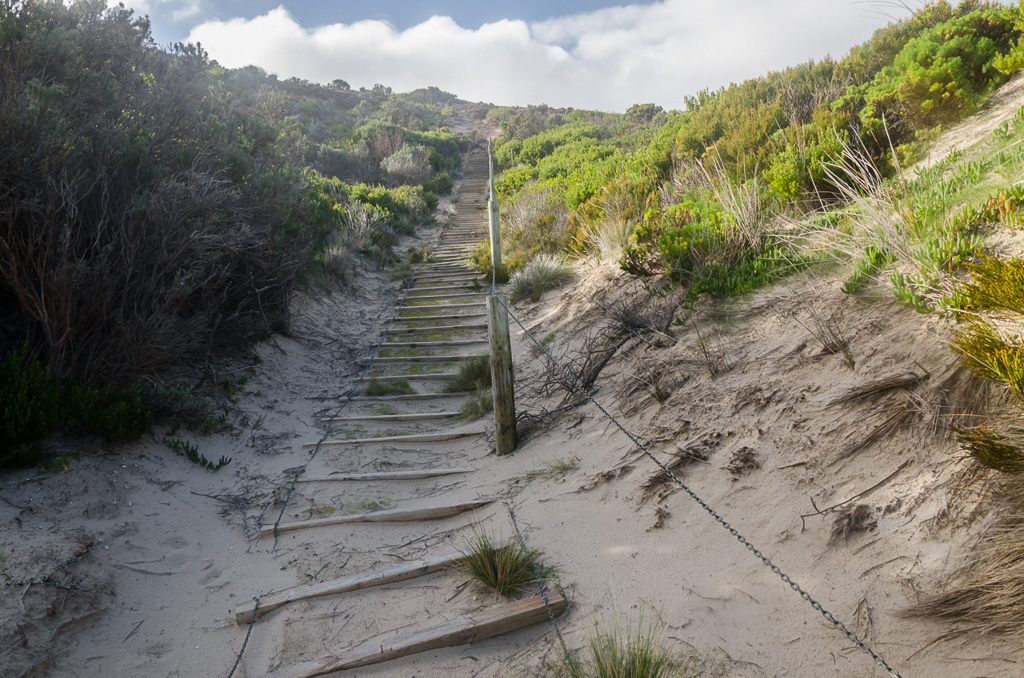 Smuffin was enjoying his ‘no pants only overpants and underpants system’ so much that he slipped into overdrive. Taking off like an extremely oversized gazelle and leaving me chewing sand in his wake. There’s no reason why I should have been so pathetic, but I’d entered a mojo-free zone and the only way up was to slowly chip away at the hillside, one slat at a time.

Walking with my torso horizontal to the ground did have some advantages though. I saw this particularly interesting piece of windswept grass that had formed a circle which a compass couldn’t better. 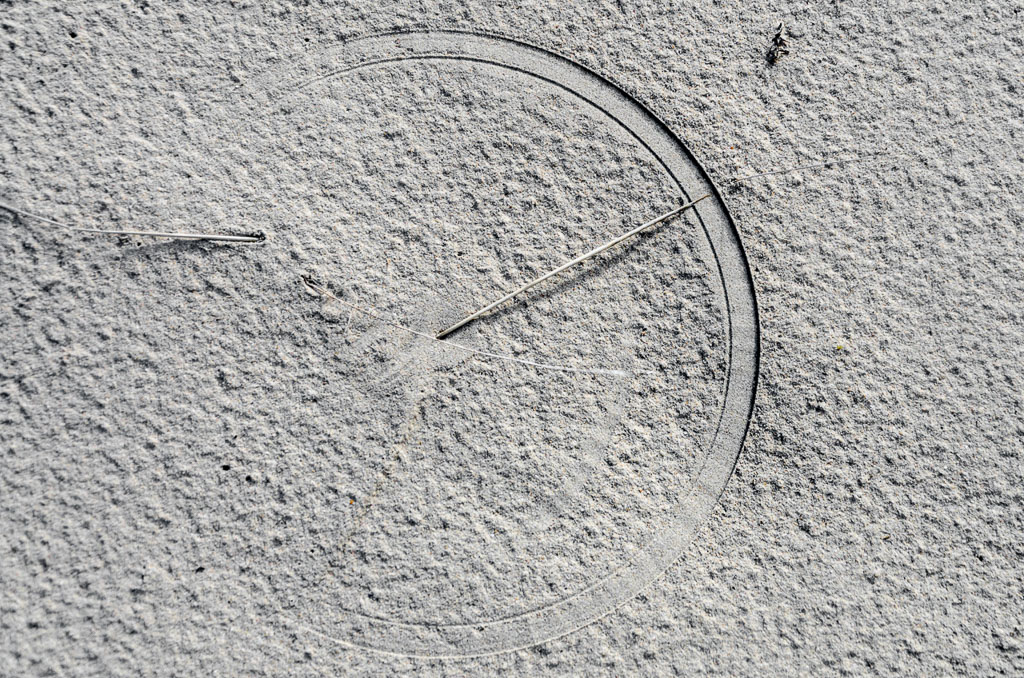 Perfect circles weren’t the only things to see in the sand. Someone had left a message. 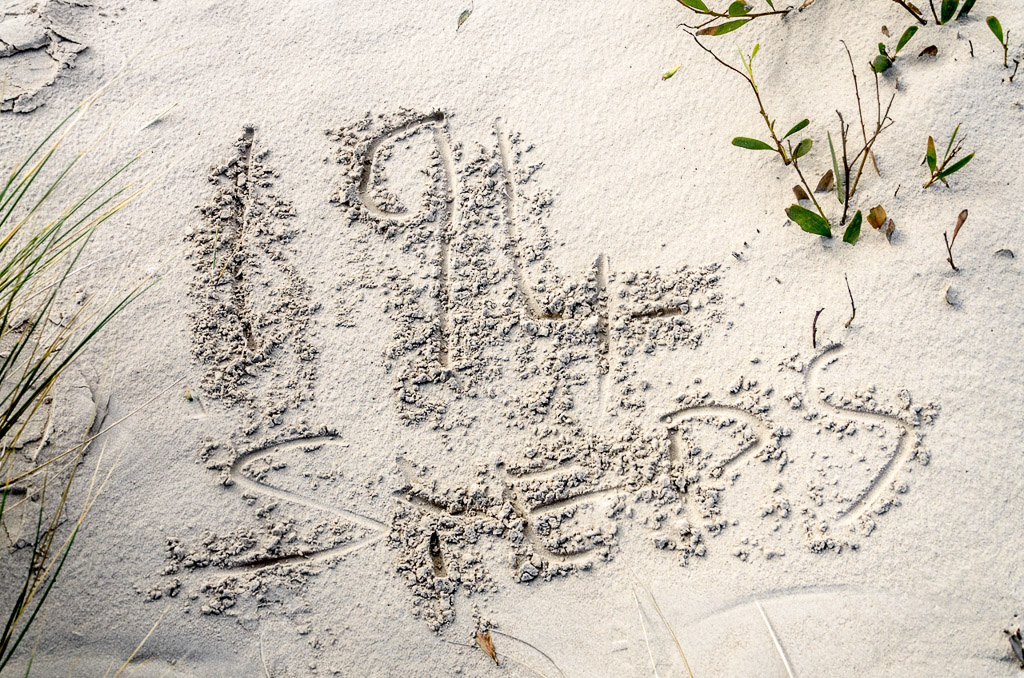 Amongst the pain as I climbed, there were some nice views unfolding, with the highest Victorian coastal cliff from the previous day now on the horizon. 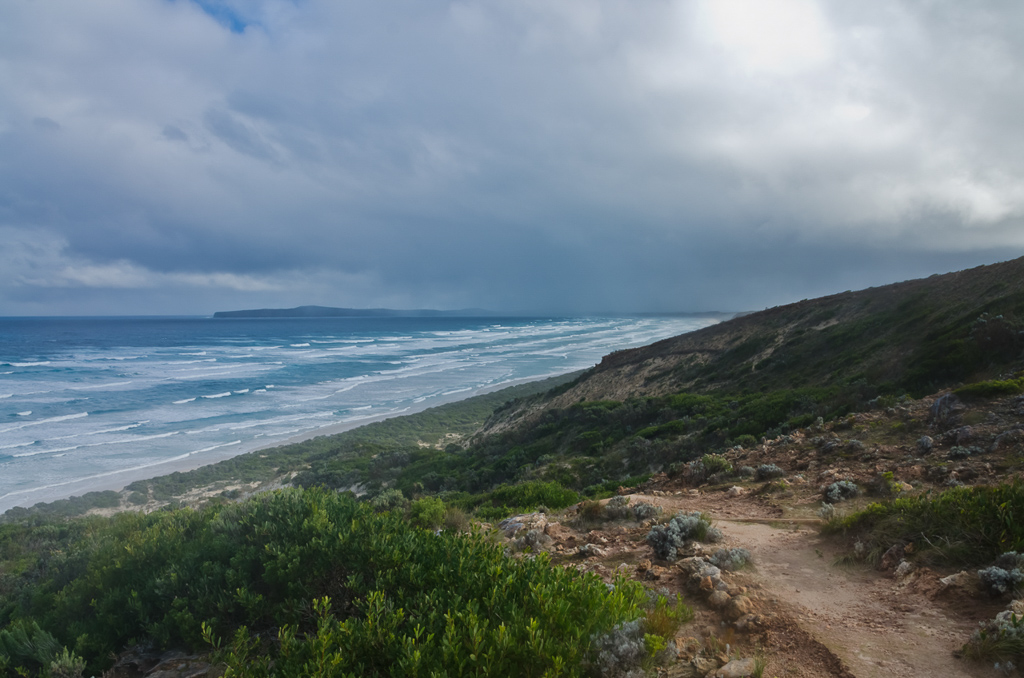 Suddenly, with a sudden alignment of the planets, something appeared. The hiking gods had delivered nirvana on this hillside and I wasn’t going to ignore the gift that had been given. 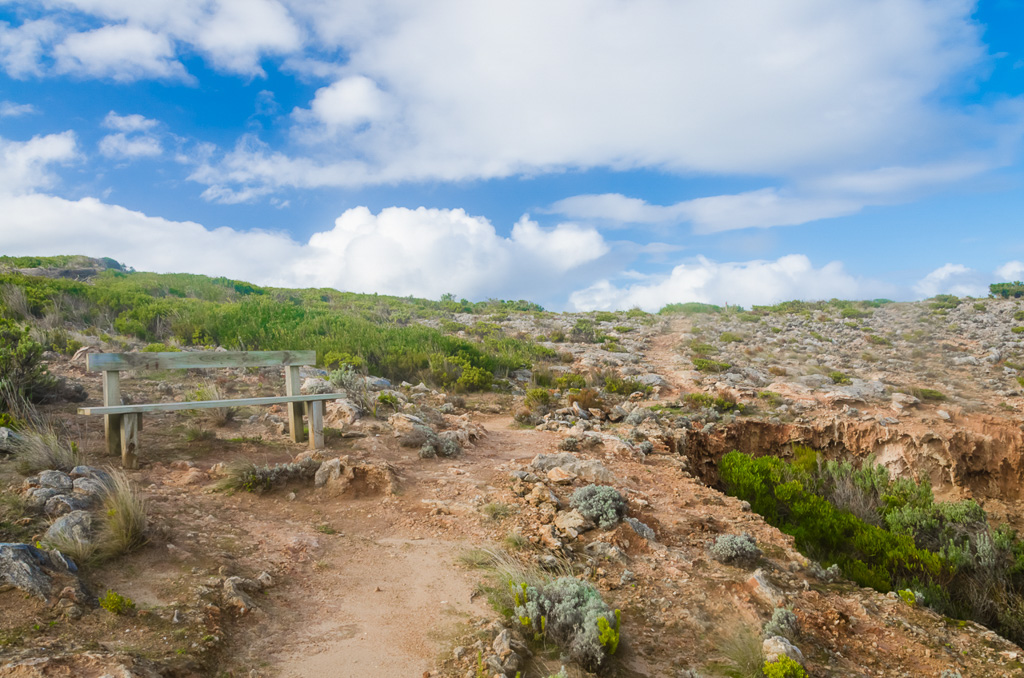 I reckon I sat on that chair for so long that I’d cooled down from the climb to a point where I was approaching hypothermia. And loving it.

With the ascent over I was now able to take in the surroundings. The coast looked fantastic with the rolling surf creating a mist of spray over the cliffs and dunes. 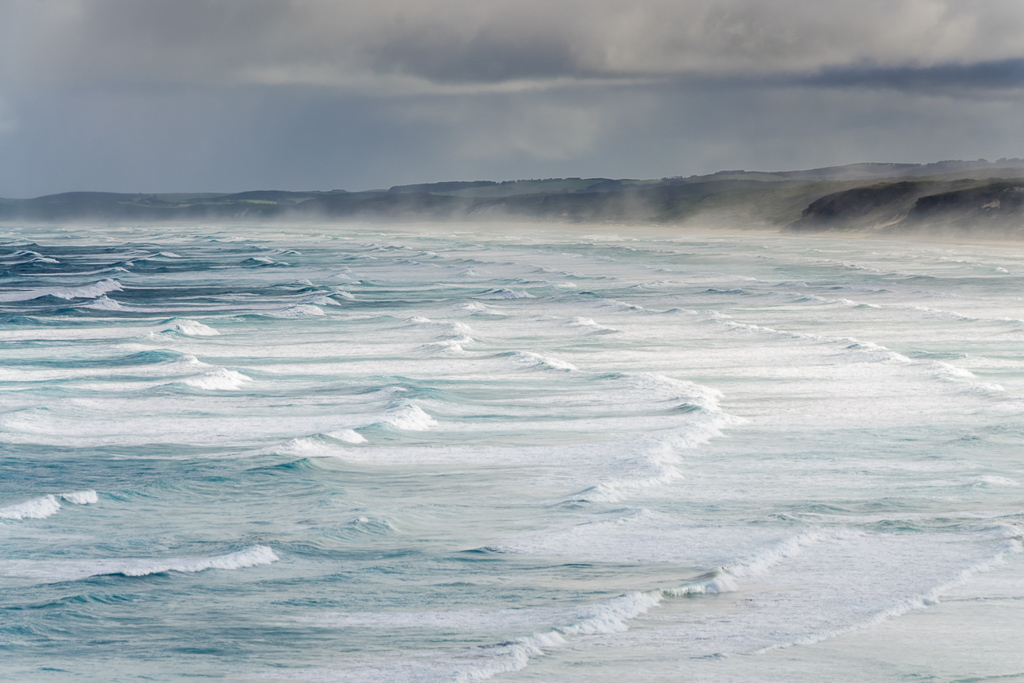 Mind you, there were some exposure nightmares regarding this. You don’t realise how long it took to get this remotely right, with the glare of sky and water. 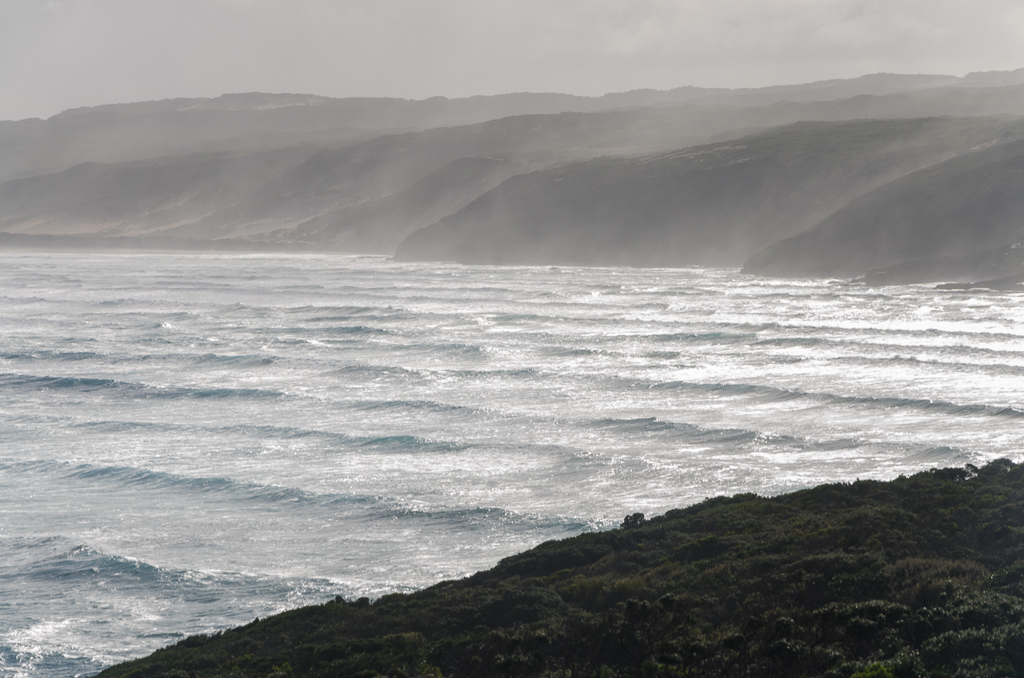 Little did I know that during my exposure problem, Smuffin was having his own. Apparently during his manic climb he’d heated up to the point that even the overpants/no pants system wasn’t working. What did he do? Well, he discarded his overpants of course and was now hiking at full speed in underpants only, which must have felt fairly free and easy, if not slightly unusual to look at. We’ll see this particular look at the end of the post.

Continuing his full throttle assault on Cape Nelson he powered on. This next photo is the inaugural, ‘Where’s Smuffin’ challenge. 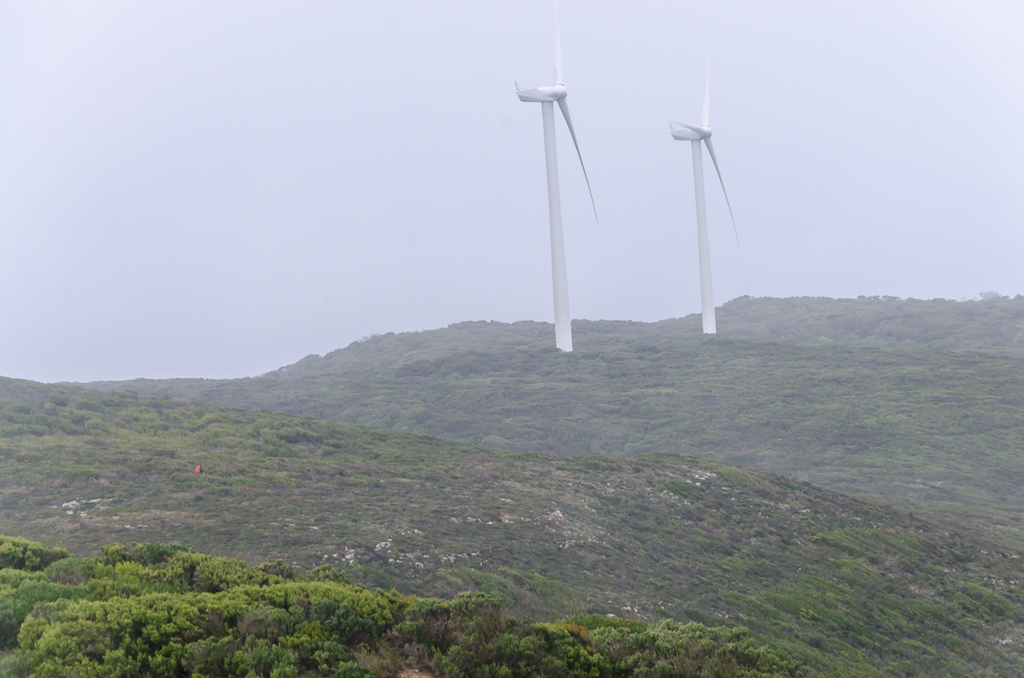 He was gone for the day, so I pottered along a narrow, undulating path passing through tea tree and the odd diversion.

There’s a particular house on the cliff-tops overlooking Murrells Beach and it’d be a fantastic spot to live, even though it resembled Hitler’s bunker. A large, grey hulk sitting above the tree-line didn’t look that appealing, but at least it was fairly inconspicuous compared to others that I’d seen on coastlines. 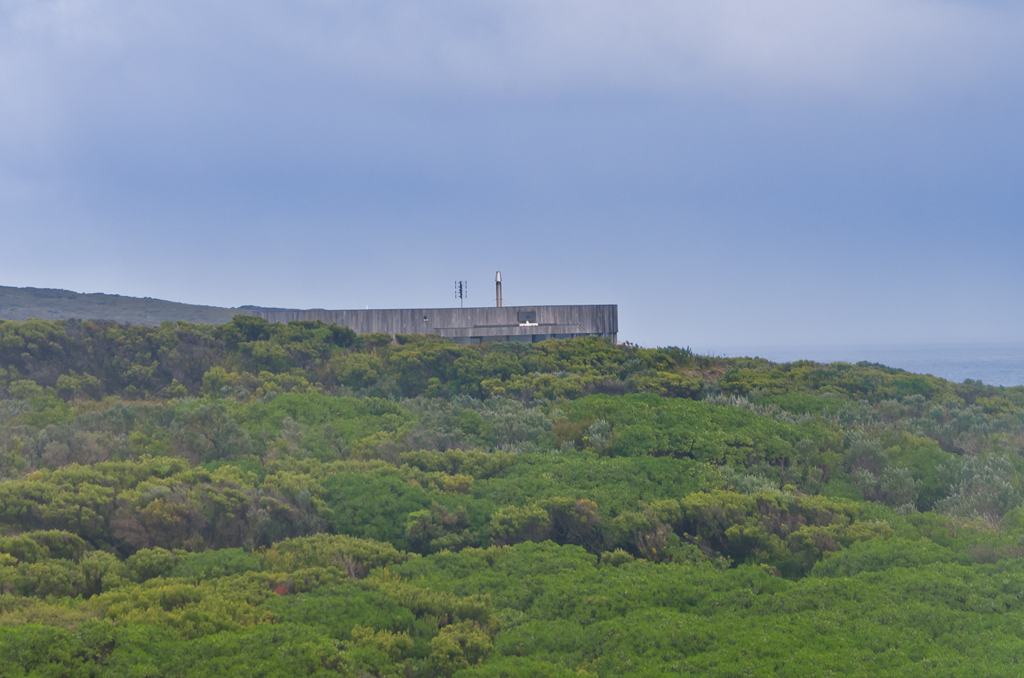 The path headed off in different directions to avoid the private property of this house. Within the tea tree I had no idea what was going on, until popping out on top of the cliffs with the coast in view again. 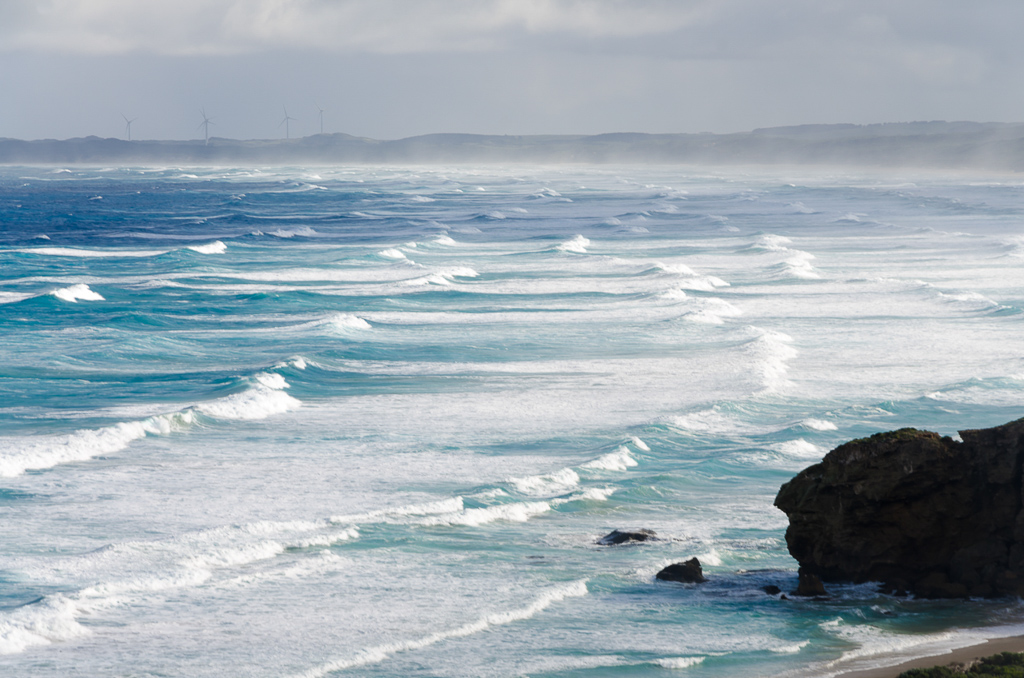 The most important stop for the day was Cape Nelson Lighthouse. Besides being a passionate ‘beacons of the sea’ lover, I was also aware of the café that was attached to it. In fact, this was partly the reason why Smuffin had spent the day sprinting, as his heart was set on some beers for lunch.

It was quiet walking for me and the only people I came across were on a path near the lighthouse. An older couple who I’d found out later, informed Smuffin that they classify themselves as ‘serious hikers’ and gave a run down of the ‘serious’ hikes they’d undertaken. I’m not sure why people continually do this sort of stuff when outdoors. Trust me, if you come across my staggering body on a walk somewhere, I’ll inform you that I spend most of my time either in bed or on the couch. Actually, the couple who’d divulged their hiking history said nothing to me other than a cursory ‘hello’, as they passed. Maybe they were all ‘hiking storied out’?

The lighthouse was now close and I was looking forward to seeing the gleaming white structure, but was perturbed to find it under renovation, with scaffolding wrapped around the lamp. Oh no! Where are the clean lines for my photos?! 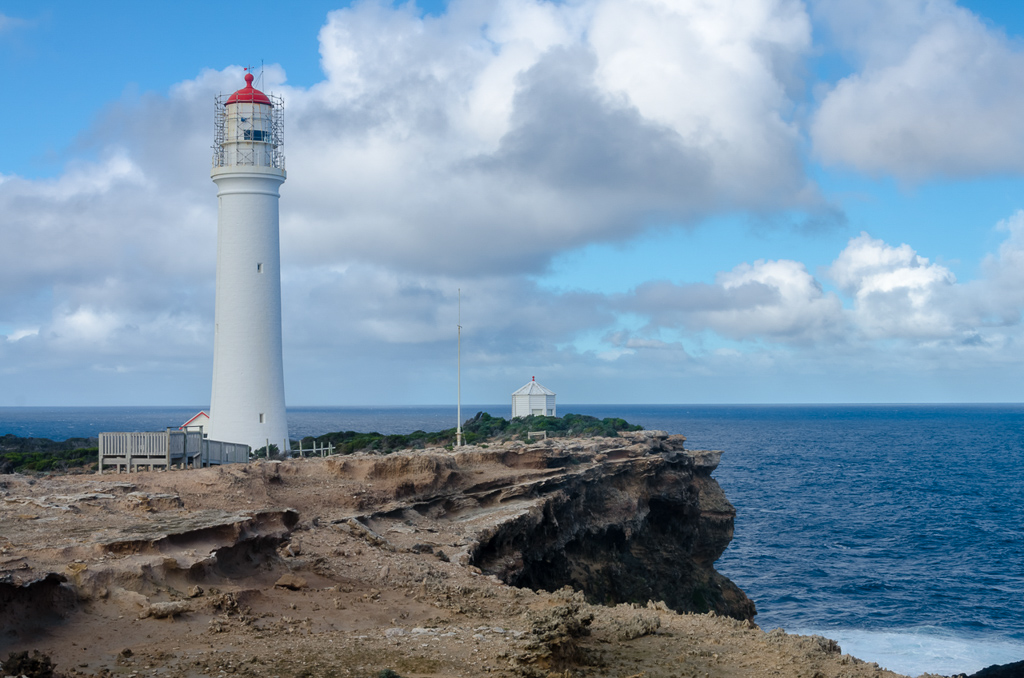 Oh well. Passing under it, I did get to take the obligatory, ‘standing at the base looking up’ shot. 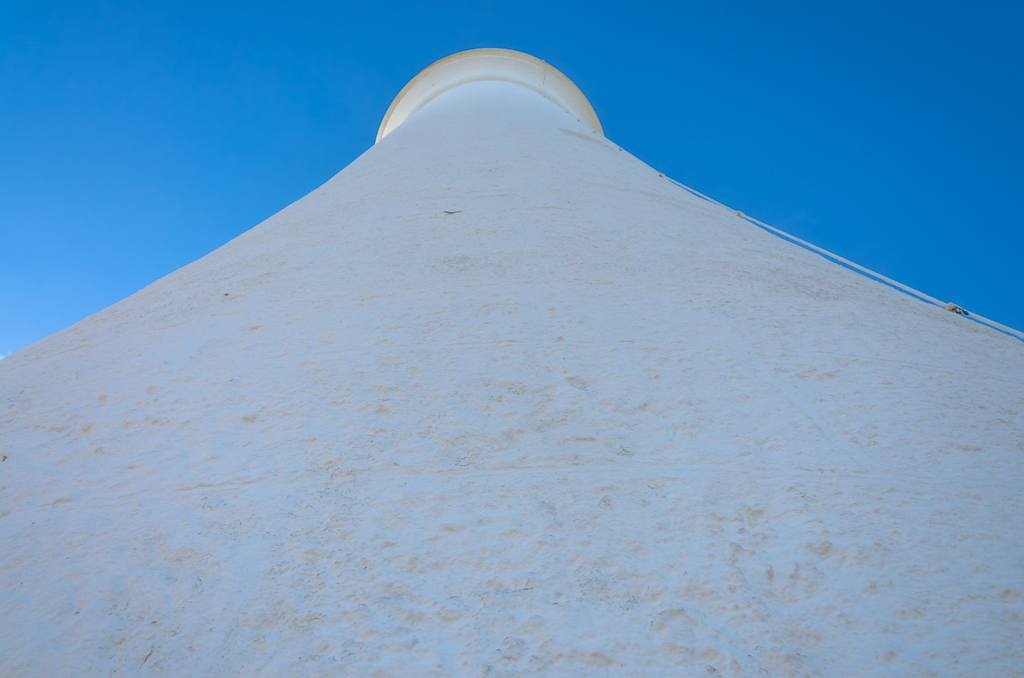 Smuffin had been waiting in the café for so long, that he needed multiple beer acquisitions to pass the time. Oh yeah, if you’re wondering, he’d actually gone coy at this stage and was wearing his overpants.

Remember in the last post how I hit the café at Bridgewater Bay like a food devouring psychopath? Well, on this occasion I was marginally more respectable, mainly because a few of the lunch dishes were sold out. Some alternative meals were inhaled instead and even the lighthouse itself looked tasty. Again, I’d forgotten to take photos of the dishes eaten. Then again, maybe during the feeding frenzy I’d eaten the digital images themselves? Yum.

The bonus of the lighthouse is that the Mallee camp is only a short distance away, so there was no rush to get moving again. Once we did though, it was standard fare strolling along the cliff-tops with the waves thundering down below. 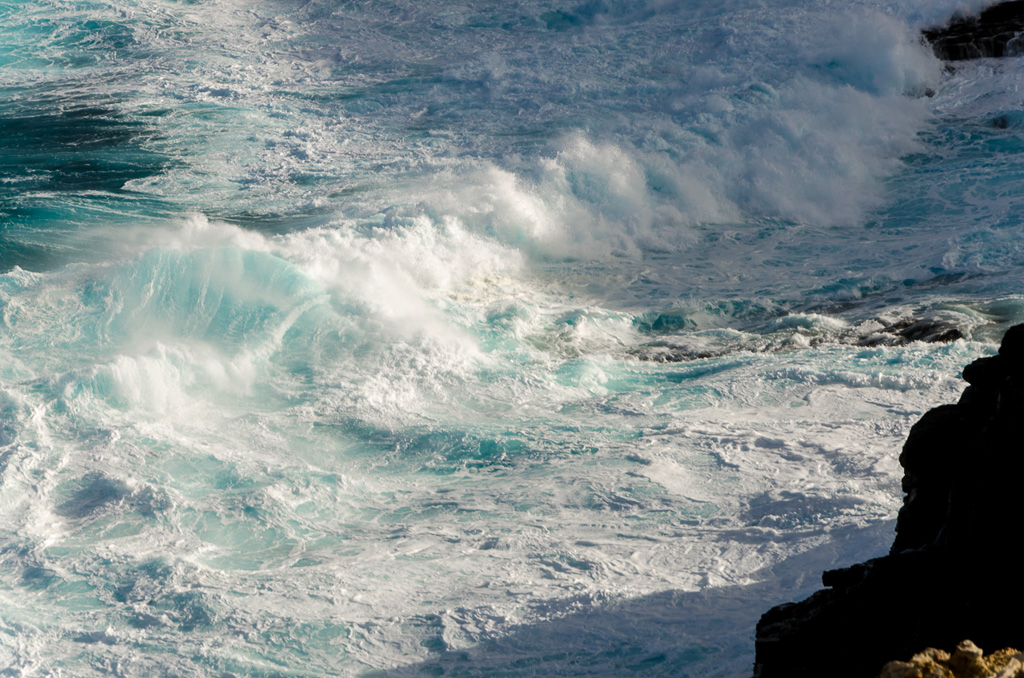 The waves pounding the rocks were a good display of Newton’s Third Law. Every action has an equal and opposite reaction. That’s easy, but there’s another which isn’t as well known. It’s Newton’s Fourth Law of Drawers. This obscure law applied to Smuffin’s pants. No people, pants on. People gone, pants off. I’m telling you now. It’s all physics. As soon the lighthouse was out of sight, he was sans trousers and borderline freeballing to Mallee camp.

This was the last camp for our hike and it’s fairly new. Tucked away amongst the trees with a number of sand platforms for tents, this was also one of the larger sites. Smuffin tracked down his daily food drop and was displaying his athletic prowess by sprinting to the camp shelter. This is the ‘no trouser look’ which was on display for a large portion of the day, with the junk carried at the ten past twelve position. 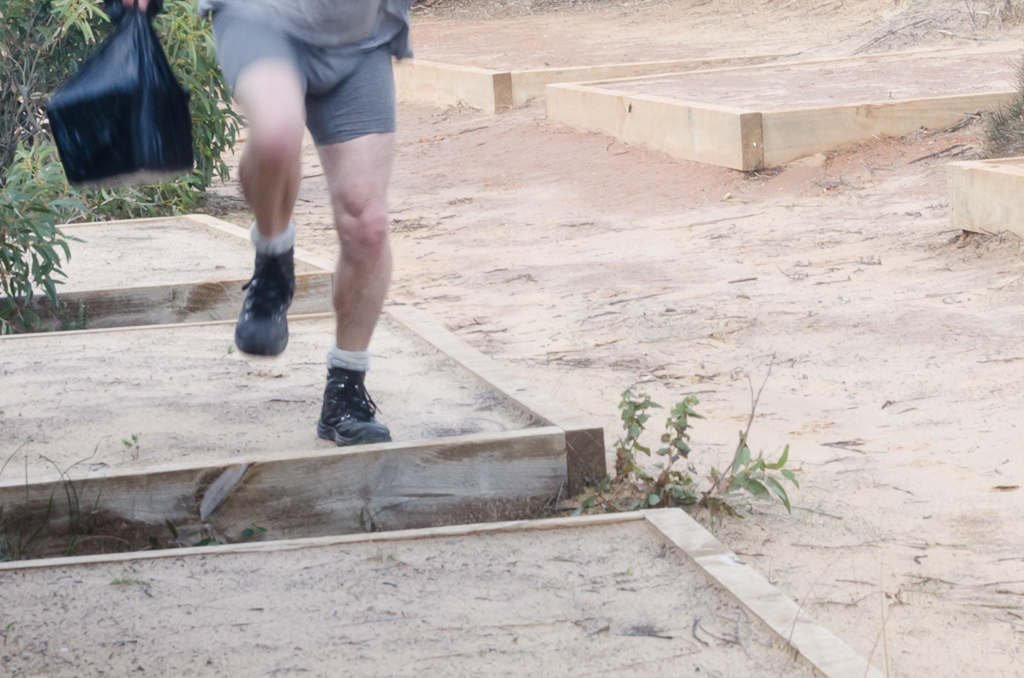 There were some mixed feelings regarding this night. The hike was over and we’d be going home the next day, but I’d become accustomed to the routine of daily walking, so didn’t really want it to end. Damn the world that has to be returned to… 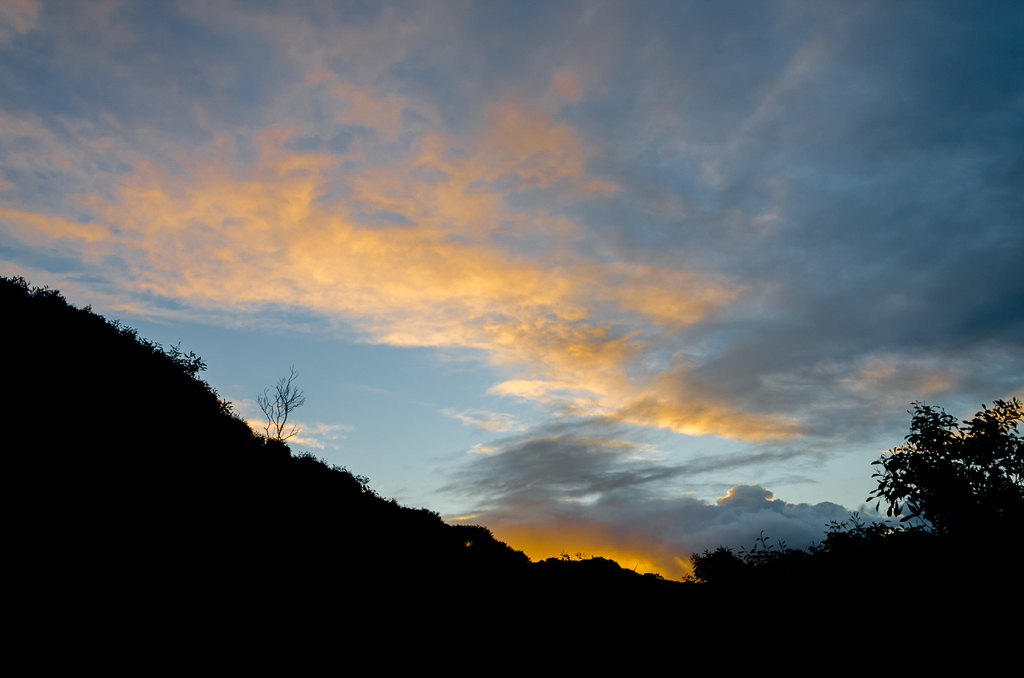 The final sunset of the night was quite colourful, but again we were surrounded by wind turbines. They weren’t too annoying though, as they supplied a feature to photograph. 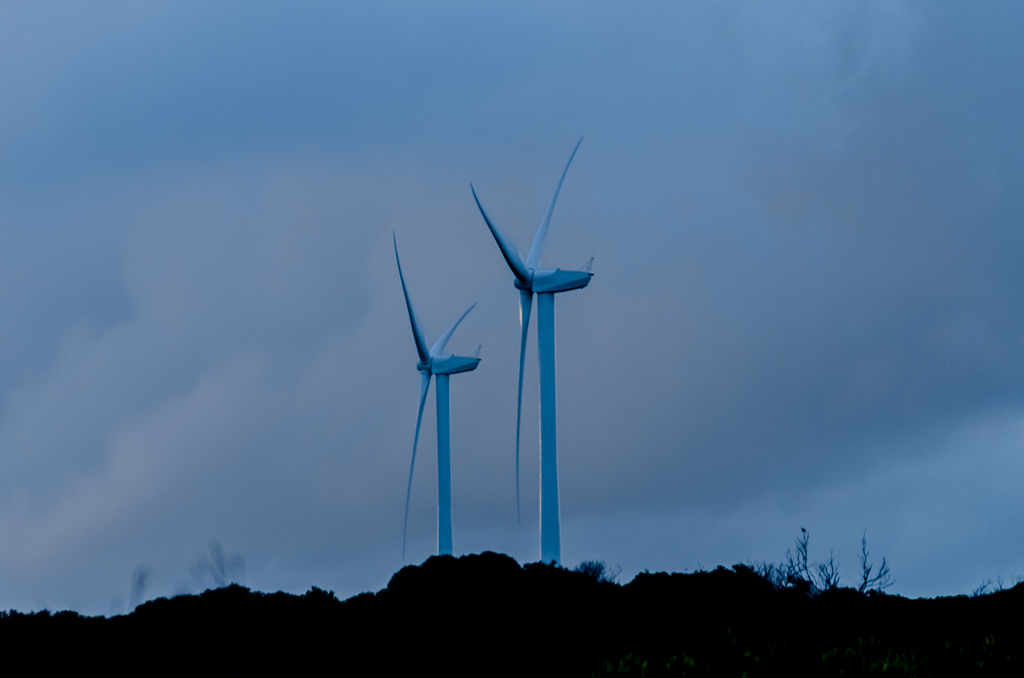 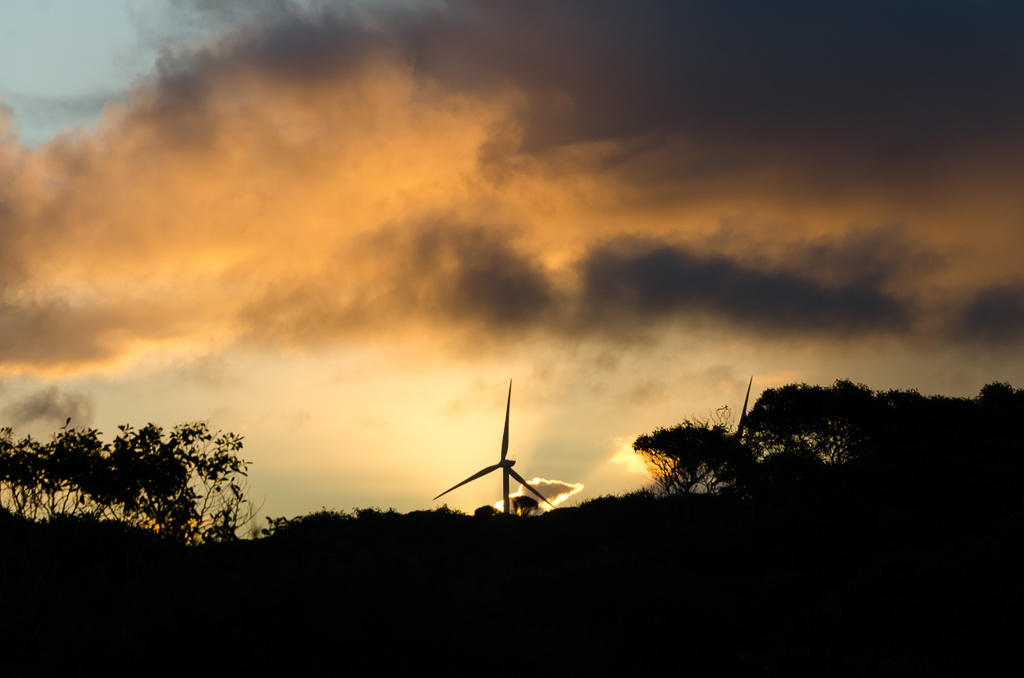 Only one day to go. I didn’t think I would make it (the writing, not the walking!)