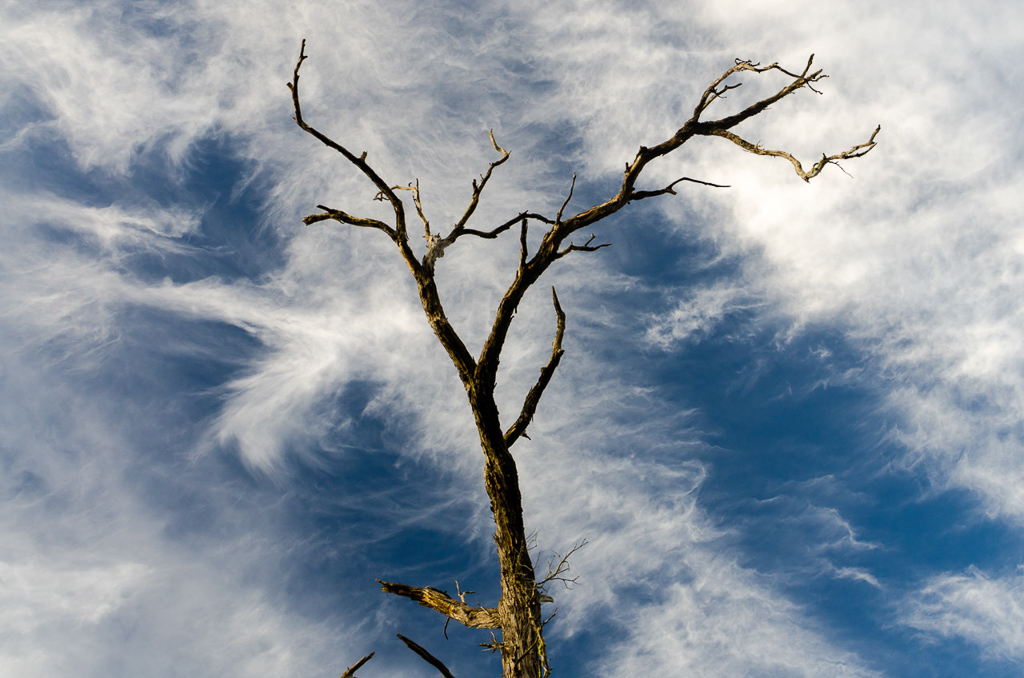 Do you remember my last post where I mentioned I had to get it over quick, as I hardly took any photos for the day? Well, it gets worse, as this particular stroll has even less to choose from, so I’ll be pulling out all of my literary stops of entertainment to get through this longish day.

I’d put my head down at the Cobboboonee Camp for the night and I went for the ‘sleep-on-the-table-in-the-shelter’ method rather than setting up the tent. This system isn’t bad, but I had one hell of a crap sleep.

It seemed to get inky-black dark in the forest early and it was only then I became aware of some annoying noises. Firstly, two trunks of enormous eucalypt trees next to the shelter spent the night grinding together in the wind creating a noise similar to a dungeon door being closed. I really couldn’t get relaxed and it only got worse. An intermittent sound of something running through the surrounding bush was disconcerting and even more so when I’d now and again shine my headlamp in the direction of the noise and be confronted with a pair of glowing eyes staring back at me from the tree-line.

Now, I used to believe in absolutely everything. UFO’s? Check. Ghosts? Hell yeah. Yeti? Are you crazy? Of course I did. Loch Ness Monster? Definitely. Jimmy Hoffa being held as a sex slave in a Las Vegas motel room with Elvis Presley and Salman Rushdie? Check. This went on for quite a few years until I suddenly woke up one day and said, “It’s all crap!” I’d really like to believe something supernatural, but until a UFO lands on my front lawn and I get to high-five a small green bloke I’ll never remotely think any of it’s true.

Well, that’s until I spend quiet nights out alone in the bush and unfortunately my mind can start racing, resulting in all of those absurd fears from years ago coming to the surface. It reminds me of the days as a kid when on occasions I’d have to park my bike in the shed at home in the dark. My parents didn’t believe in outdoor lighting, so I’d park it without being able to see a thing and then sprint to the back door of the house convinced there was a serial killer chasing me and trying to slam a knife into my back. I’d make it to the house and say, “Phew! Bad luck Night Stalker! I survived again!”

So, when I looked at those glowing eyes staring at me in the Cobboboonee Forest in the middle of the night, my only consolation to stop me from crapping myself was that they weren’t very high off the ground. I figured if I had to fight off a demon in the middle of the night, I’d have a good chance against something that was only two feet in height.

Anyway, the night lasted forever and I was planning my next move, as I had a bit of a dilemma. The next camp of Fitzroy was only 12 km away, but the one after that being Moleside was a further 20 km down the road. It meant either a really short day or a 30+ km slog. I felt the GSWW only really gets going once the Glenelg River is reached at Moleside Camp, so I was pretty keen to get there on this day. I’d seen enough of the Cobboboonee Forest in my two trips through this area and I didn’t want to spend another night surrounded by demons, so I contemplated how I’d do 30 km on a winters day with the subsequent short amount of daylight.

Do you know what I came up with? I’d cheat. Instead of following the track, I figured I’d just do 27 km road-bash for the day from Cobboboonee Camp to Moleside and reach camp quite comfortably. I knew I wasn’t missing much, as I’d seen what I needed to see only a week earlier when I followed the track. So, that was that and I hit the road quite early in the morning. 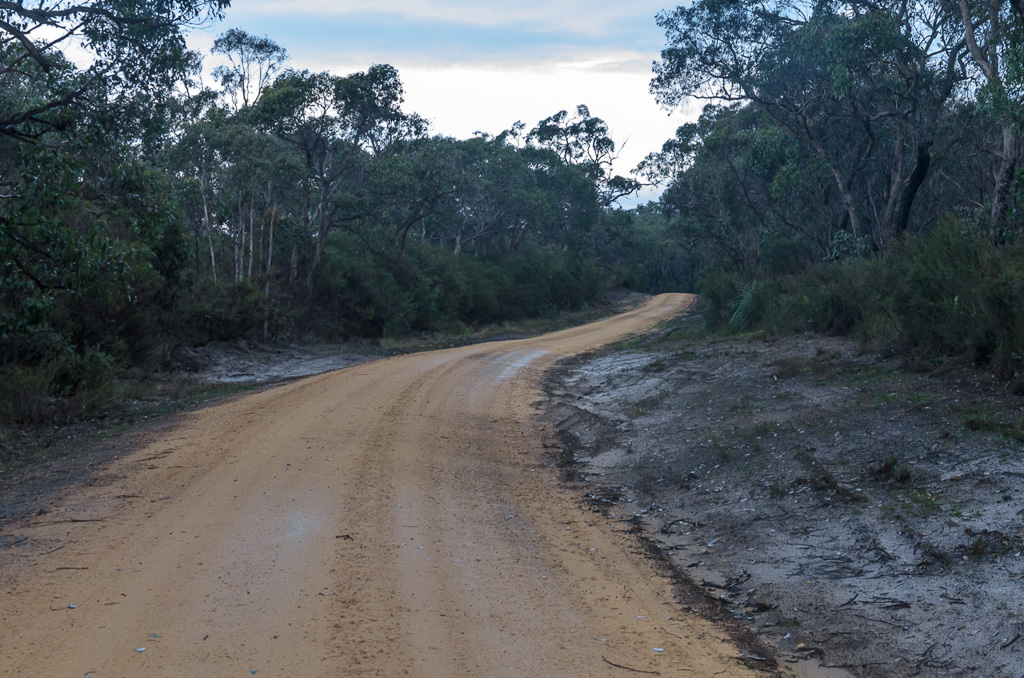 Heavy showers kept sweeping through and again it meant my camera was packed away out of the weather for most of the day. You know what though? The first ten or so kilometres were fine, but suddenly it hit me. “This is really, really dull!”

Every kilometre seemed longer than it really was until I realised what I needed. It was time to break out the iPod. I’d never done that on a hike before, as the only time I listen to music in the bush is at night when I can’t sleep, so this was a bit of a first. I do like quantity in an iPod, so I always carry my 160GB version. Here it is here with Sennheiser headphones and surrounded by a Belkin case complete with a fake metallic pattern, which looks like something straight out of a Paul Verhoeven movie (I’m thinking Robocop, not Showgirls). 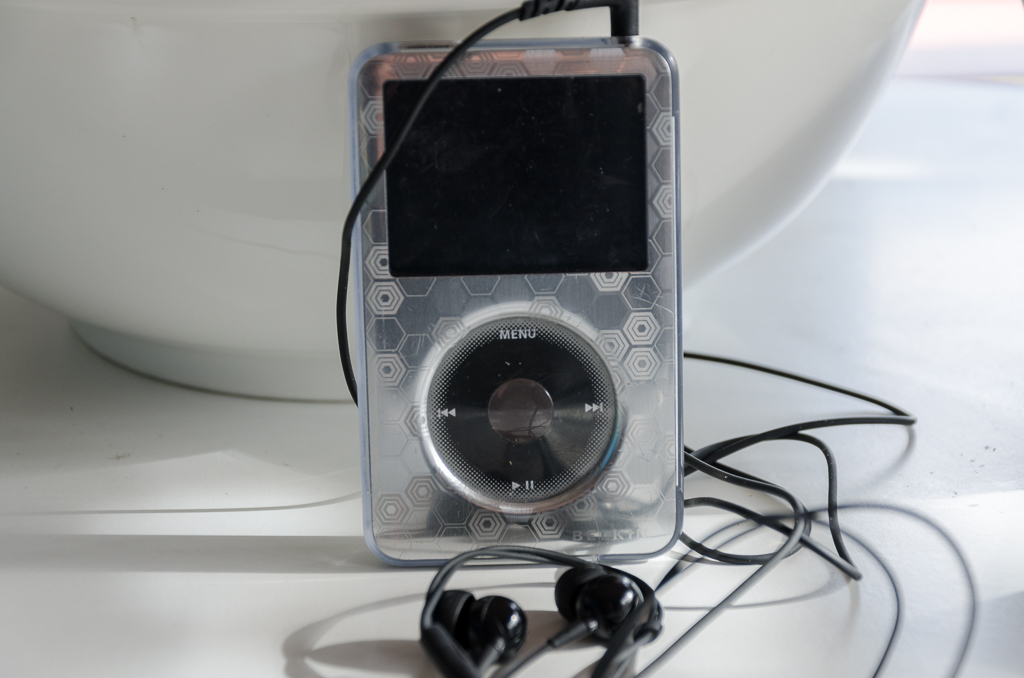 It’s not that simple though. The thing about the iPod though is I’ve managed to introduce suffering into music listening. It’s usually only on shuffle and whatever song comes on, I force myself to listen to its entirety. The rule is not to skip the song, even though I might be cursing myself, “Who put this crap on my iPod?!” If you want to know what I mean, here’s the shuffle playlist I listened to during the road-bash. I mean, why not? The walking is dull and I’ve got no photos, so I might as well write about the songs instead. Here we go then, in the actual order they played.

The Moon is a Harsh Mistress – Jimmy Webb
My, My, My – Grant Lee Buffalo
I Am a Child – Neil Young (Live Rust)
The Whole of the Moon – The Waterboys
Bitter Sweet Symphony – The Verve
Johnny – Suicide
In Your Room (The Jeep Rock Mix) – Depeche Mode
The One – The Brian Jonestown Massacre
Credit in the Straight World – Hole
Precious – The Jam

Oh yeah, the road continued, looking like this for most of the day… 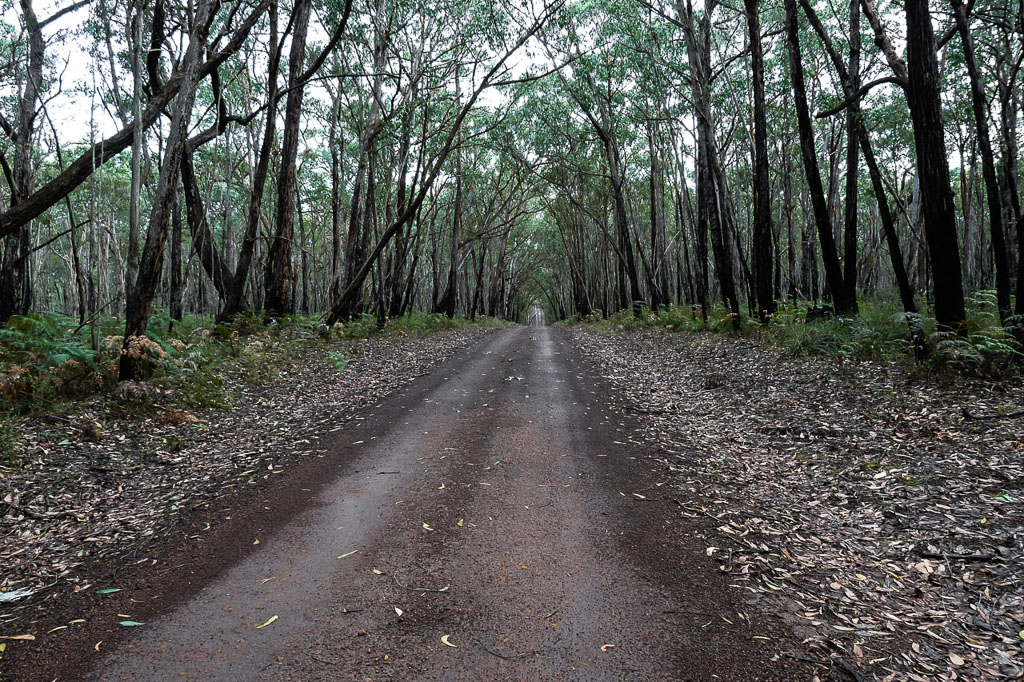 …and the songs kept coming.

Wu-Tang Clan Ain’t Nuthing ta Fuck Wit – Wu-Tang Clan
The Sound of Settling – Death Cab for Cutie
1969 – The Stooges
Gimme the Loot – The Notorious B.I.G.
Hallelujah I love Her So – The Animals
Eyes Without a Face – Billy Idol
Talk to Me – Peaches
Jailbird – Primal Scream
Sheela-Na-Gig – PJ Harvey
It’s Too Bad – The Jam

I even passed a creek which summed up the whole days walking. 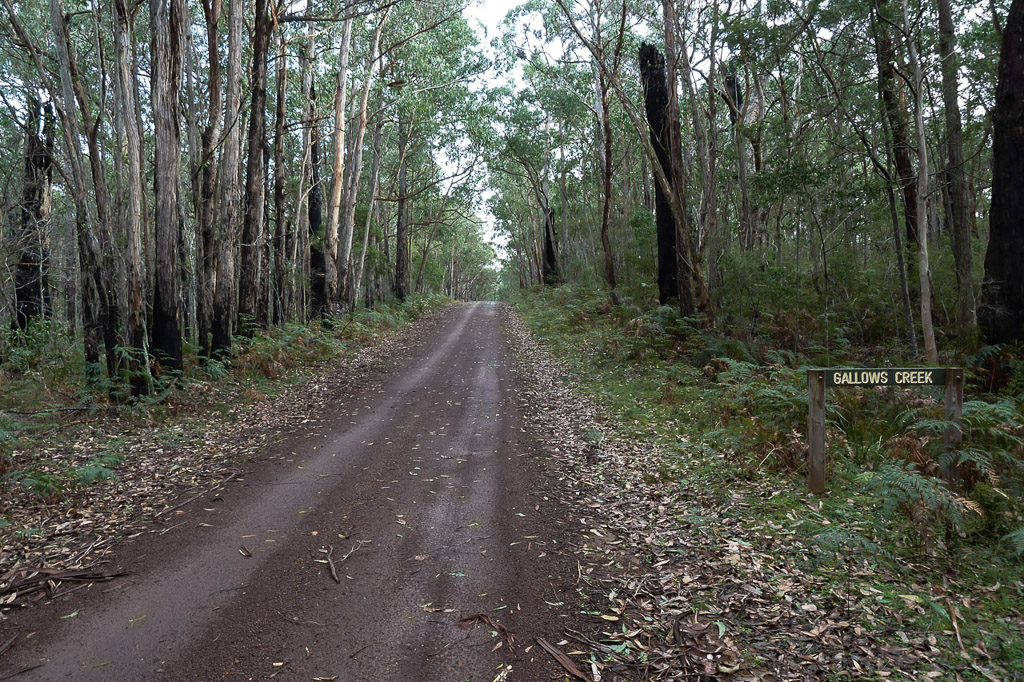 There was some frustrating stuff on the iPod, but I managed to stay focused as the songs continued.

During this time the roads were quite flat, but there was the odd annoying little hill to cross. Just something to raise the pulse a little as the kilometres ticked by. 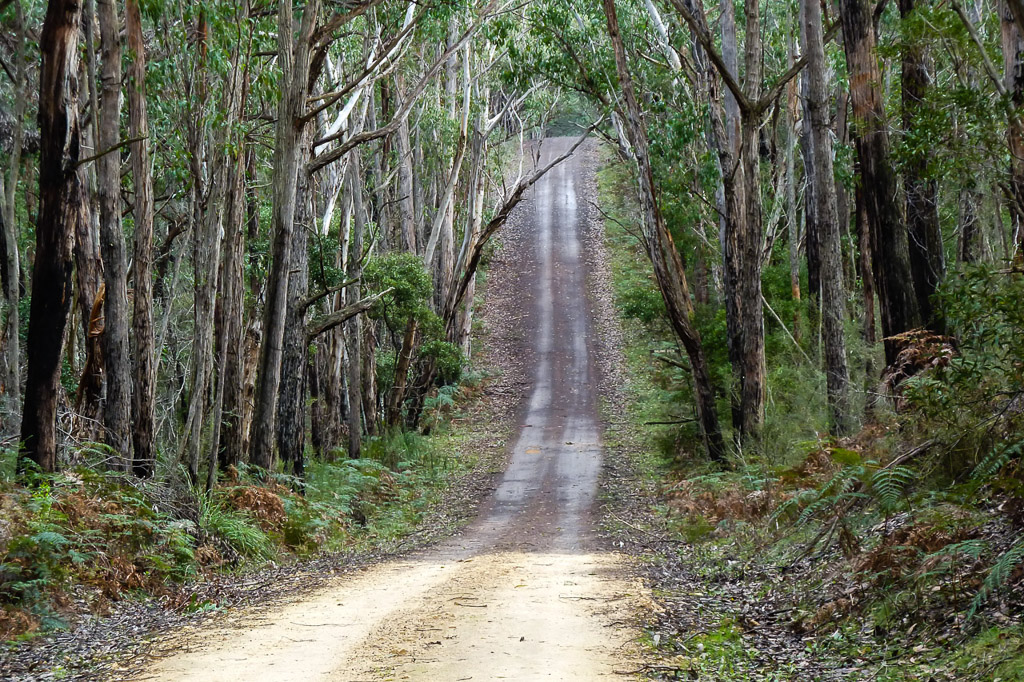 Are you sick of the music yet? Don’t worry, there’s only a few more to go.

Nearing the end of the day, I passed the small lake called the Inkpot. I’d seen it a few weeks earlier and in my mind I had an idea I’d capture the entire thing in the one photo. I tried, but not alas, it didn’t work out. Not even close. 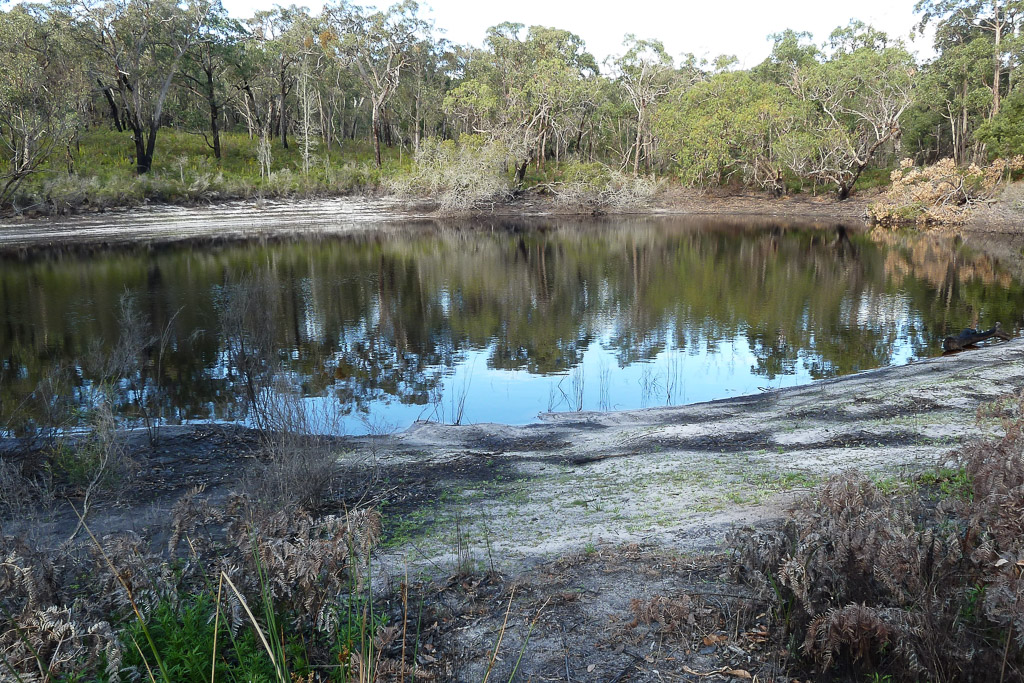 The songs are done now as I raced through the final few kilometres and entered Moleside Camp. It was nice to have reached the Glenelg River, as I didn’t really think I’d get there in three days of walking from Portland.

Near on 27 km for the day was pretty good going by my standards and the only thing that saved me from terminal boredom was the music. There may have been the odd dodgy song, but like movies, music is pretty subjective and there’s always something weird that I turn to at times and Billy Idol is one of those.

It’s always made me chuckle that when punk started there was all of those blokes with bad-arse names like Johnny Rotten, Sid Vicious and Rat Scabies, but William Broad chose Billy Idol. He sort of missed the point didn’t he? Actually, I’m also not sure why he was spending so much time sneering, but even then I still have some sort of perverse liking for his songs even though they’ve dated badly. A bit like that movie ‘Black Rain’ with Michael Douglas. It’s one of the worse movies I’ve ever seen, but I can still never get enough of it.

So, that’s it. The day was done and the real walking could begin. I finally could get the camera out, as the dark clouds moved on leaving me with some nice peaceful shots of the surrounding Moleside Camp under the glow of the setting sun. 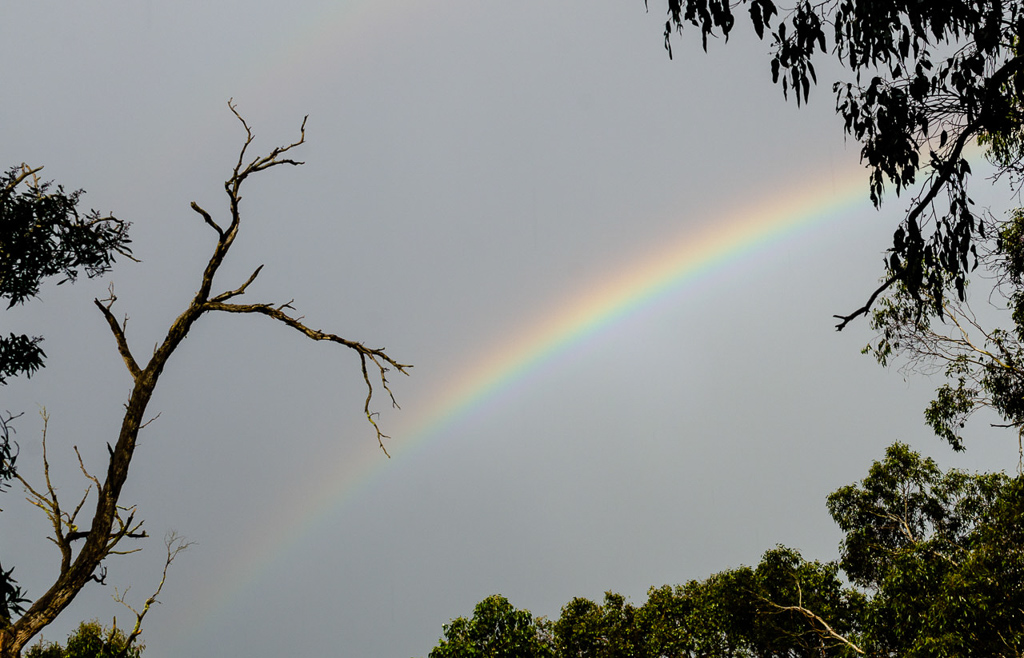 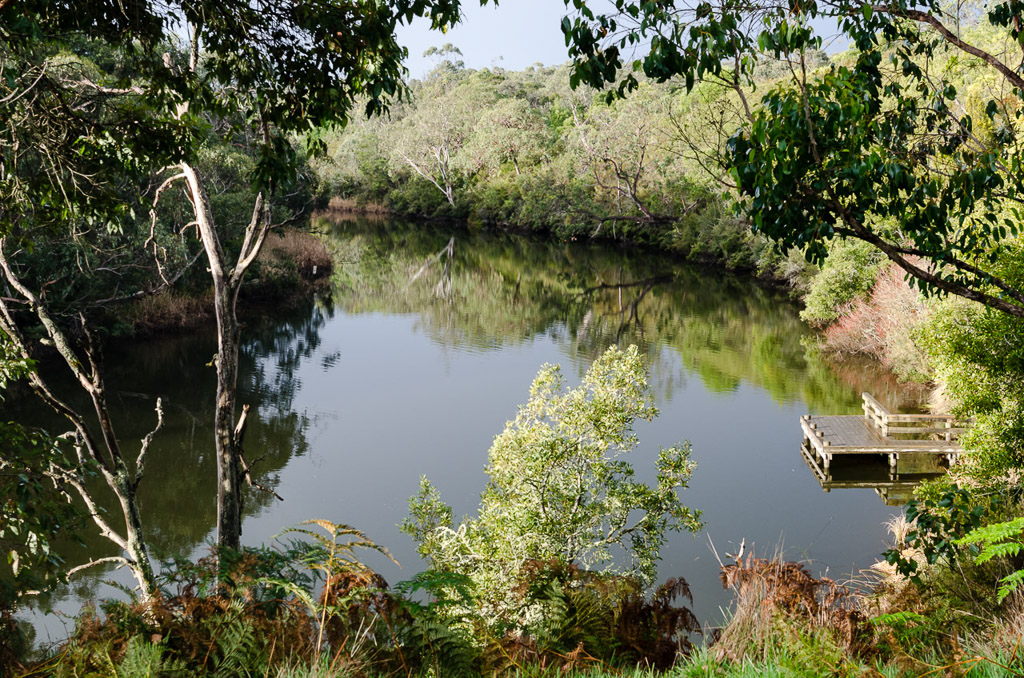 That small landing in the picture appeared to be a nice spot to sit in the late afternoon glow, so I headed over to it. 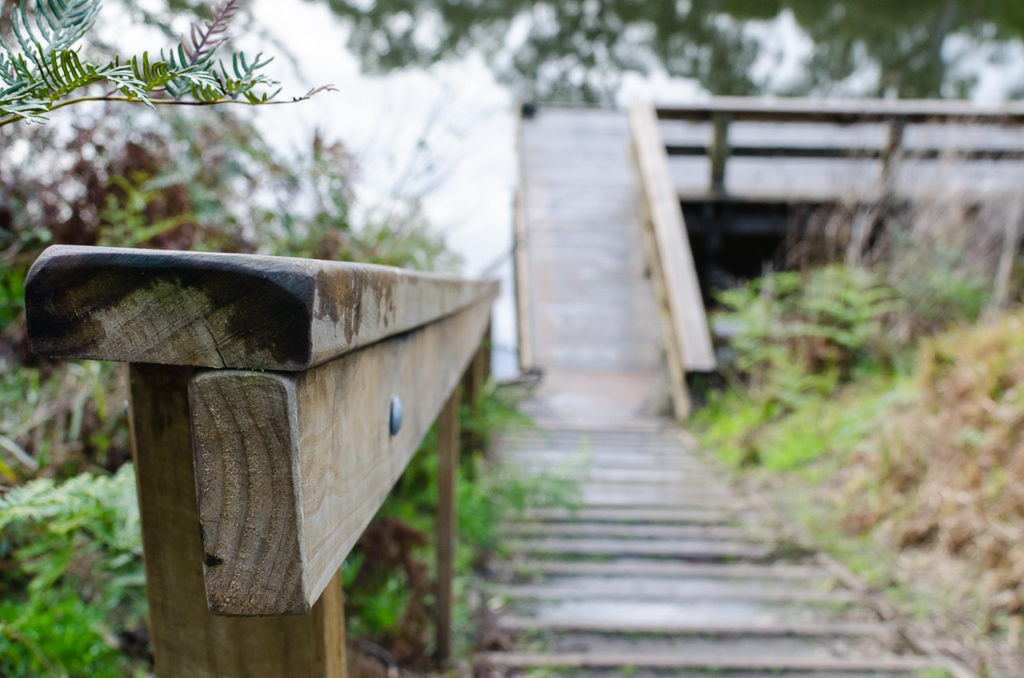 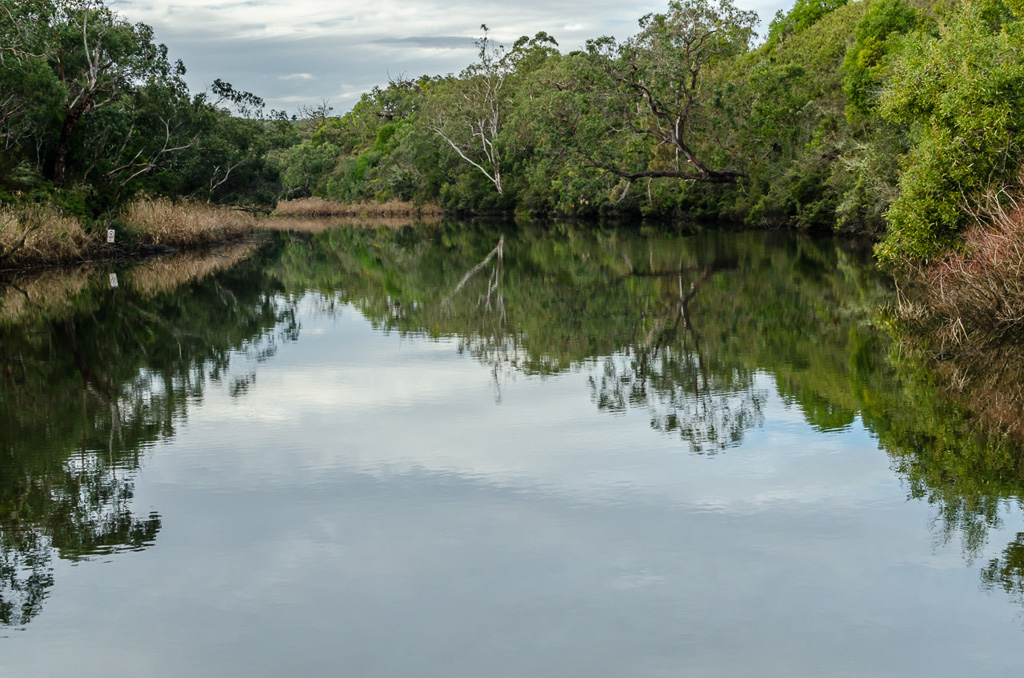 With the clouds breaking up, I was rewarded with a fantastic sky and I spent quite some time on the landing until it was almost dark. 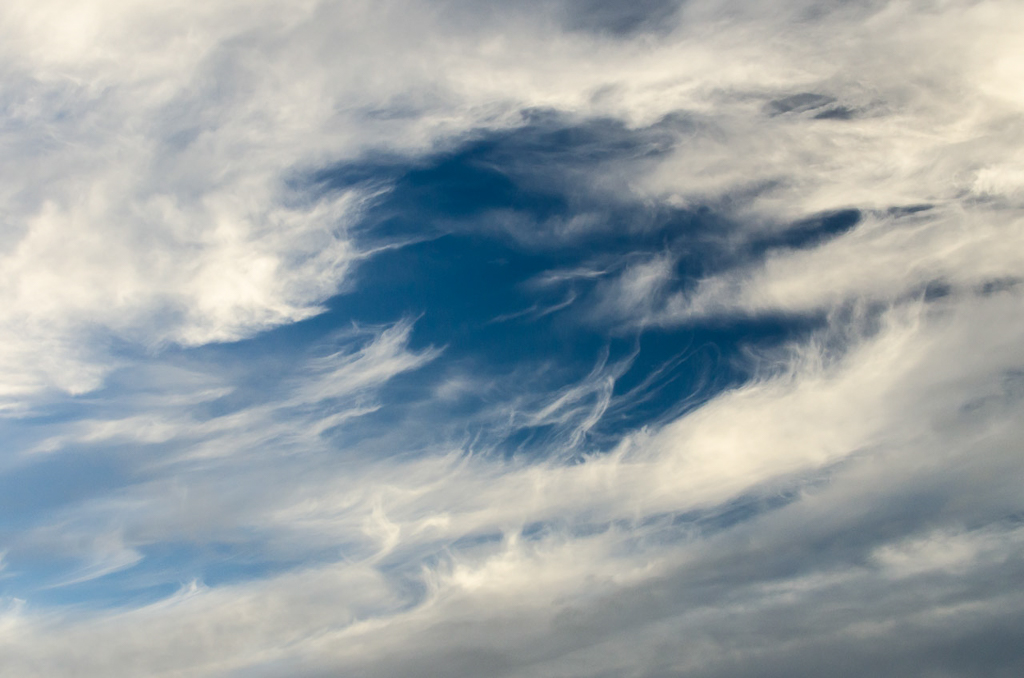 So, that was it and that’s another instalment from the eternal GSWW series over with. One last thing though. Do you know how many people I saw for the day? One. Well, I think it was one, as at one point a 4WD drove by and as I motioned a wave at the driver, I noted that the windows appeared impenetrable due to being fogged up and covered in mud. I guess someone was in there? The Night Stalker maybe? 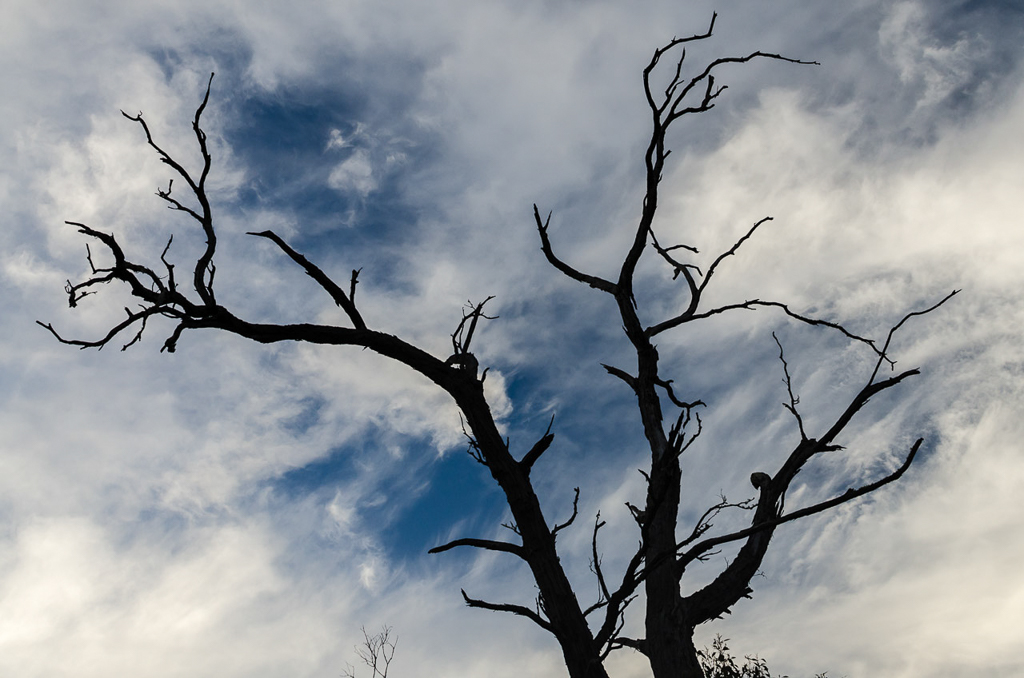