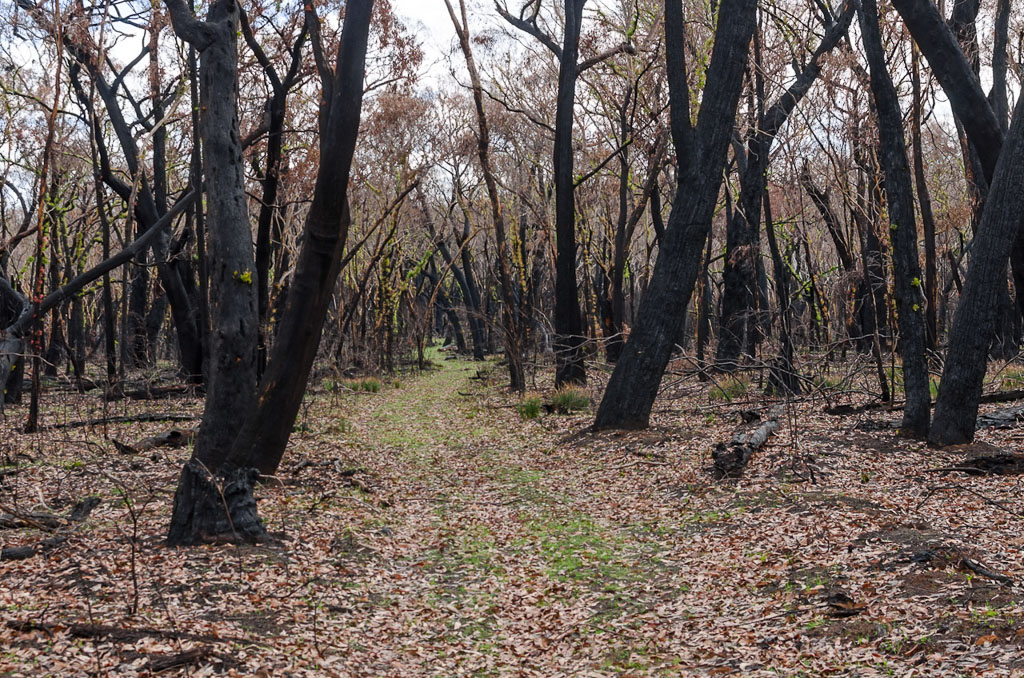 I think some celebration might be in order. I just checked out the photos I took for this 25 km leg from Cubbys to Cobboboonee Camp on the Great South West Walk last winter. Somehow there’s only a grand total of 20 pictures for the day. That must be some sort of low total world record for me, which means a short post is guaranteed. There’s no point writing a long post with hardly any pictures is there? Oh yeah, I can’t even think of anything funny to write, as I started back at work this week and already my brain has been pummelled by stupidity, which means this post is officially ‘dry’.

Anyway, I guess the main reason for lack of photos was the sameness of the walking. I’d walked this stretch only a week earlier and it’s pretty plain fare of wall-to-wall trees, not to mention the average weather. It was a fairly grim winters day of constant overcast sky and rain sweeping through, which meant my camera was packed away for most of my walking. I guess the Cobboboonee Forest would be more appetising in summer, as it certainly didn’t appeal on a day which I’ve just described.

My walk notes suggested the second day should finish at Cut-Out Camp, but that was only 15 km away, so I was always going to continue on another ten or so to Cobboboonee Camp. It made sense, as there’s not a lot to do in the forest if one arrives at camp nice and early.

So, what happened during the day? Not a lot, but it was always going to be interesting to see how I’d go with the leech-filled forest when wearing leather boots and gaiters compared to my walk with low-cut hiking shoes a week earlier.

I spent the first night being woken by the distant sound of barking dogs and cars, so I found myself up and on the track quite early. Rain at times was constant and especially so when I crossed the Surrey River on Ralphs Bridge.

Rain on the Surrey River

The one thing I did notice on this bridge was the handrail. Passing through a week earlier the railing was askew after being clobbered by a falling tree. 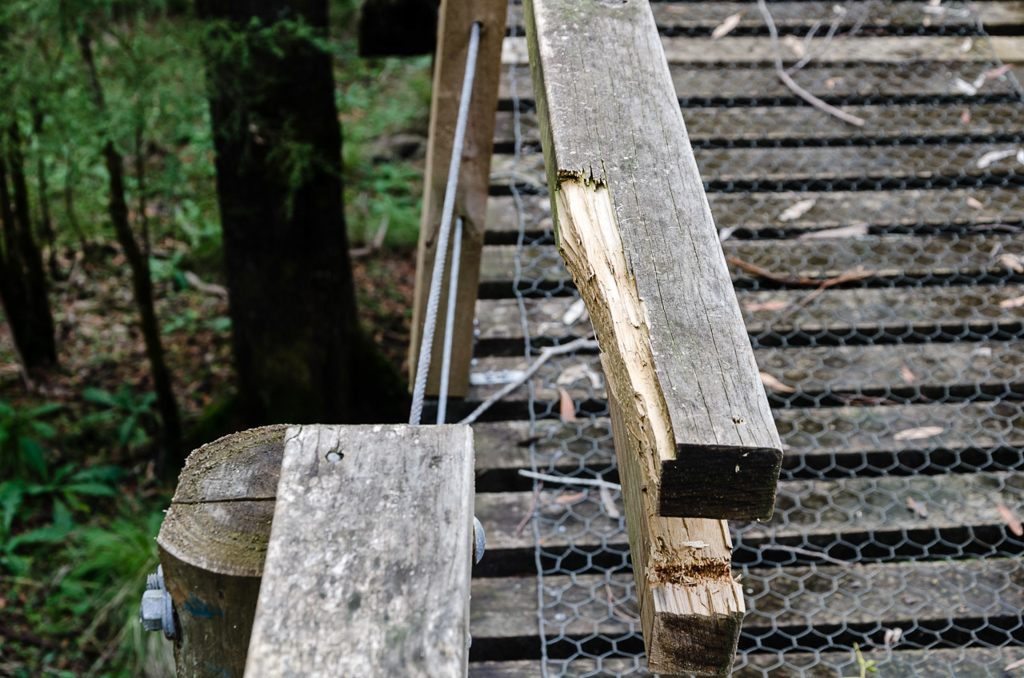 I was surprised during my revisit to see that it had been fixed. Even though the walk feels quite isolated through the forest, it’s obviously still maintained. I fully expected that handrail to remain broken for months due to my experience of other walks where bridges can remain damaged for years! 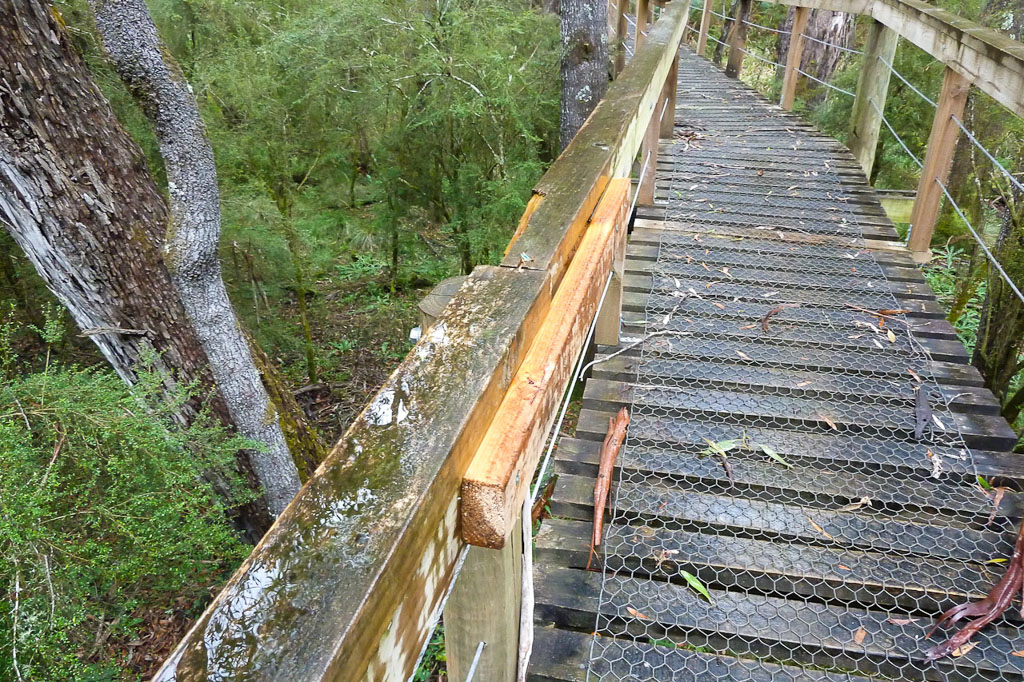 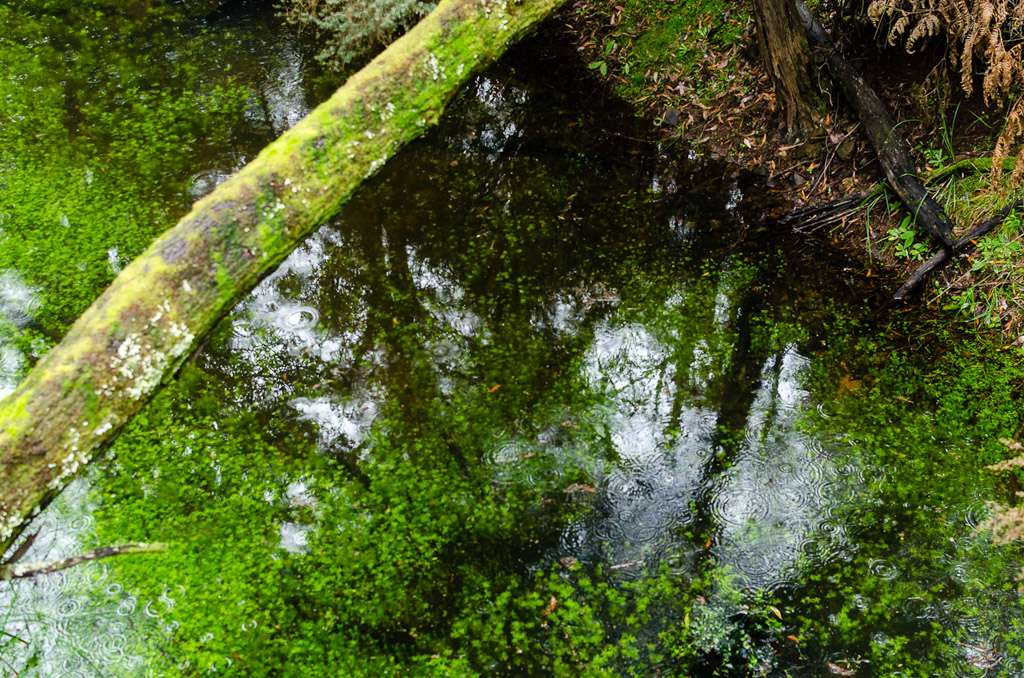 …and continued along the track finding a pair of sunglasses on the way. 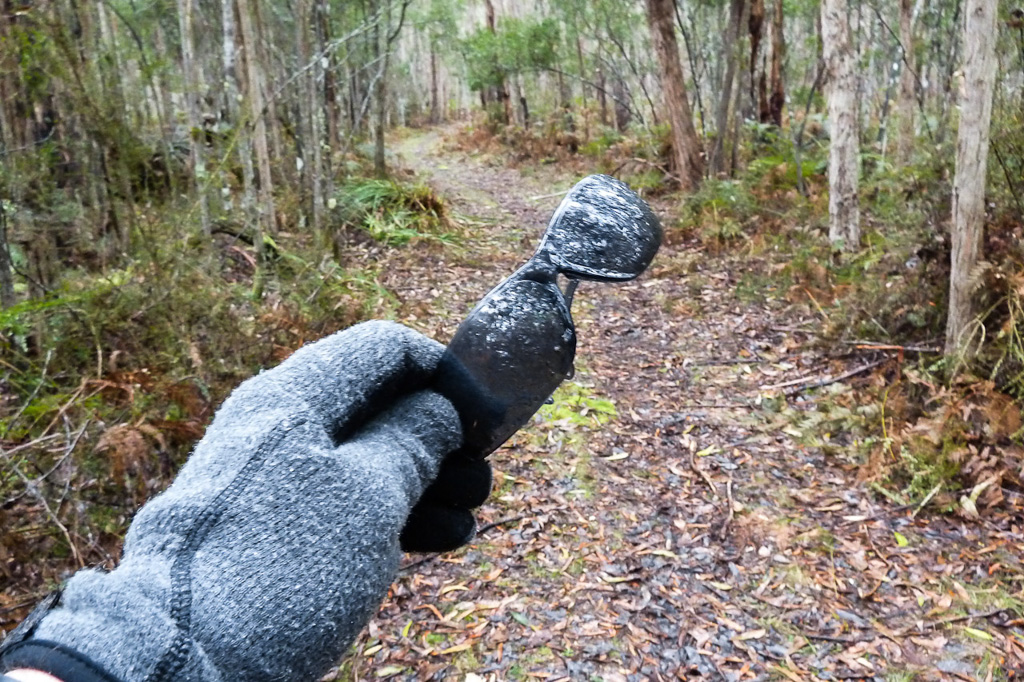 I reached Cut-Out Camp in pretty quick time by my standards. It was only midday and I’d covered the 15 km without much trouble. It was also good timing, as the heaviest rain of the day fell when I’d reached the camp.

All of the GSWW camps have a shelter and this one was especially welcome as I got to eat my lunch in dry comfort. It was whilst sitting down I noticed my one and only leech for the day on my leg and noted it’d been defeated by the gaiters. It was half-way up my leg looking for some skin to attach to and I had a lot of pleasure dispatching it to the ionosphere with a fearsome flick of the finger. If you look to the eastern sky at around 8.30 pm, you should be able to see the leech in low orbit.

Only a week earlier, any time spent stopped, meant my shoes were covered in the blood suckers, but on this occasion it was smooth sailing with the boots on.

Once the heavy rain moved on, I set-off and was soon passing the old car wreck again… 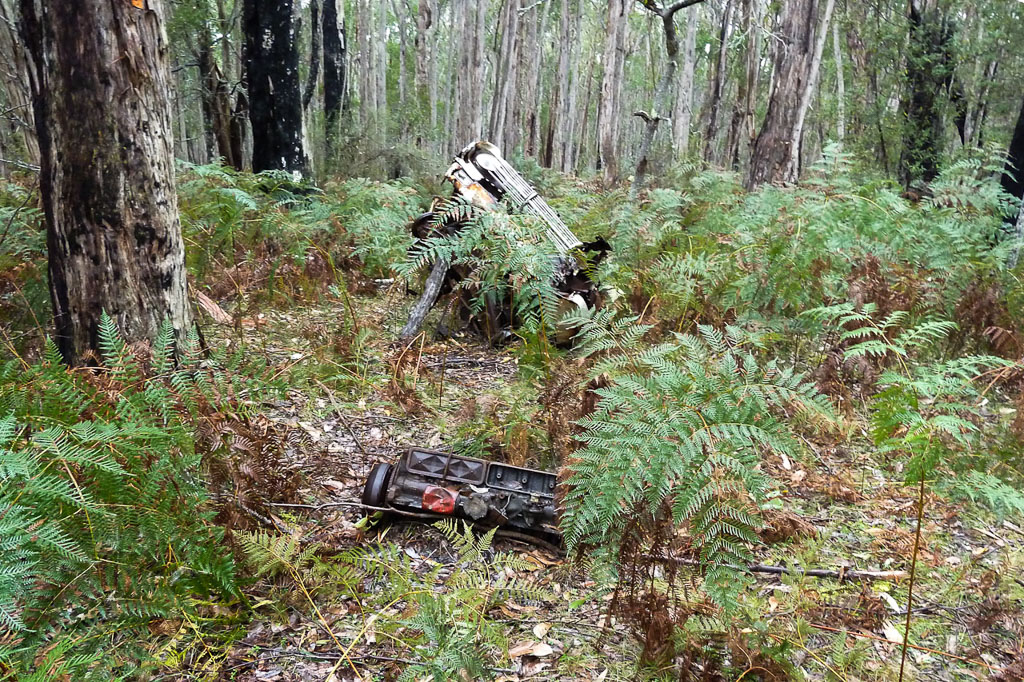 …and then I was into the recovering part of burnt forest. 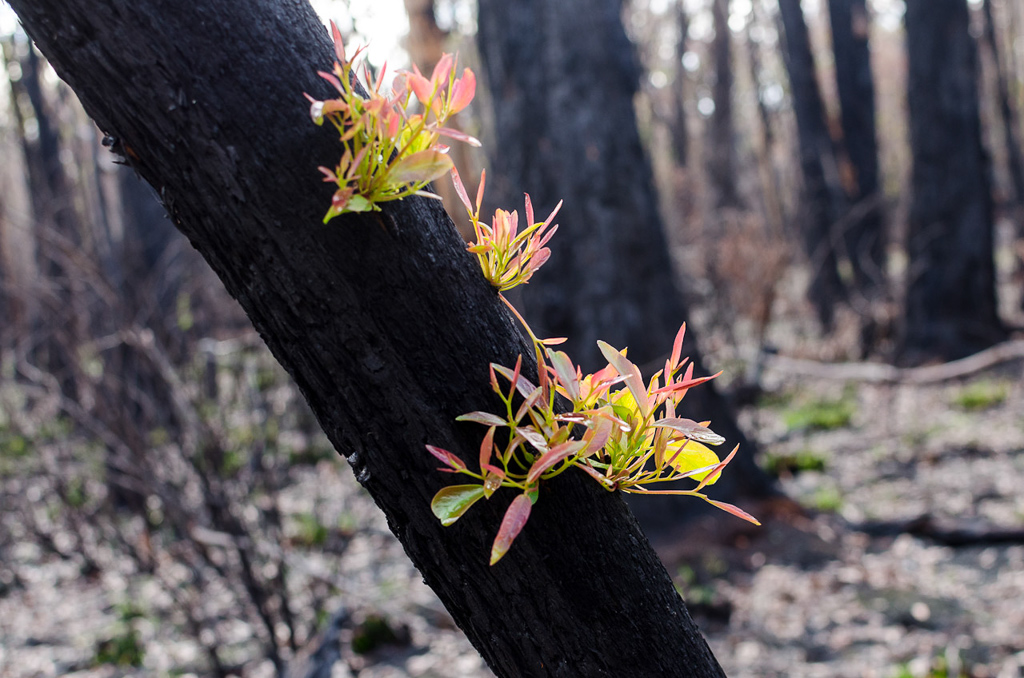 On the previous occasion, Smuffin and I had blue skies through this section, but it was all a pretty grey for my revisit. 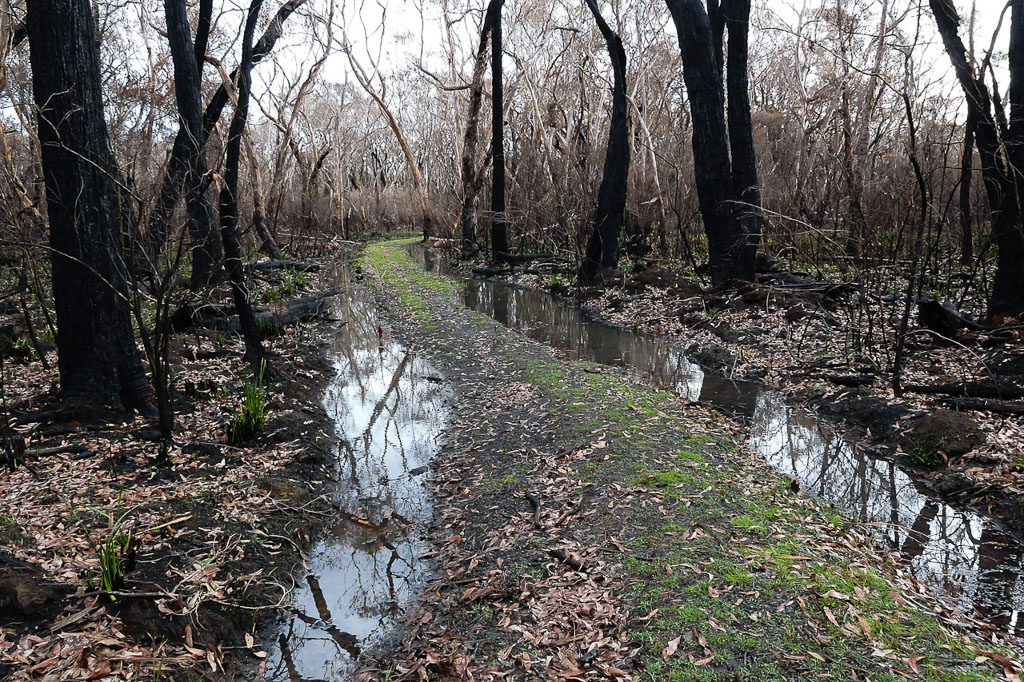 You know what? That’s about it, as I strolled into Cobboboonee Camp at about 3 pm. I was almost tempted to kick on to Fitzroy Camp, but that was another 12 km away and with the early sunset in winter I wasn’t really in the mood for walking with the headlamp on. How easy was this post? No jokes and it’s another entry over in this enormous GSWW saga.

So, it was time to sit back in the shelter and fire up the MSR Reactor stove, which is the most fearsome beast I think I’ve ever used. It’s ability to boil water quickly is amazing and I barely used any gas as a result. Maybe I’ll talk about that at the end of this saga? Why not finish the day with it in its rampaging glory…? 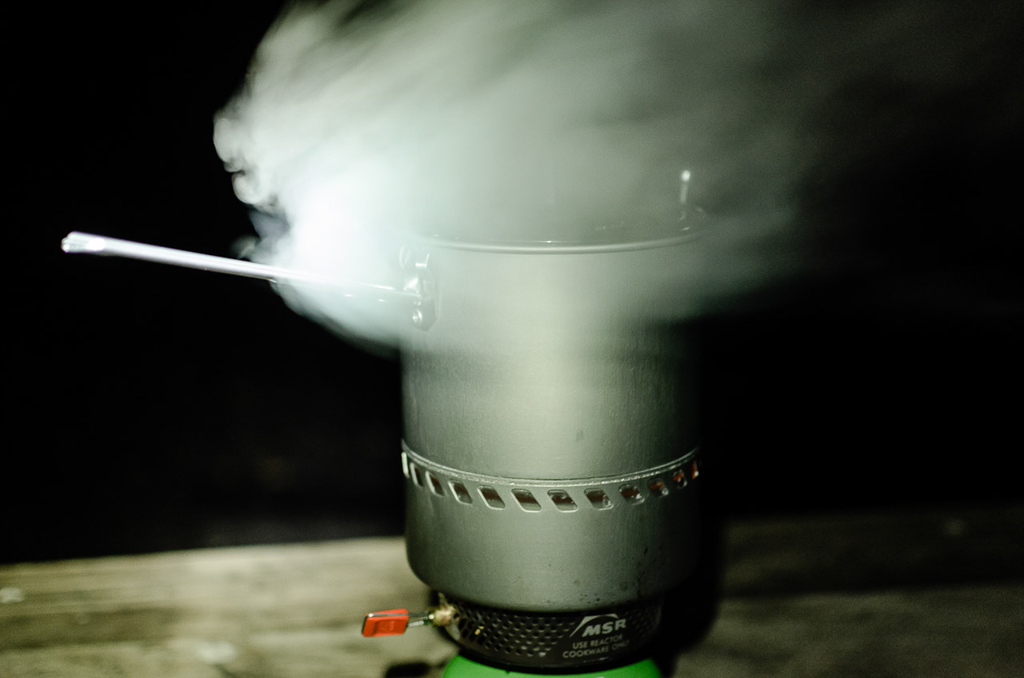