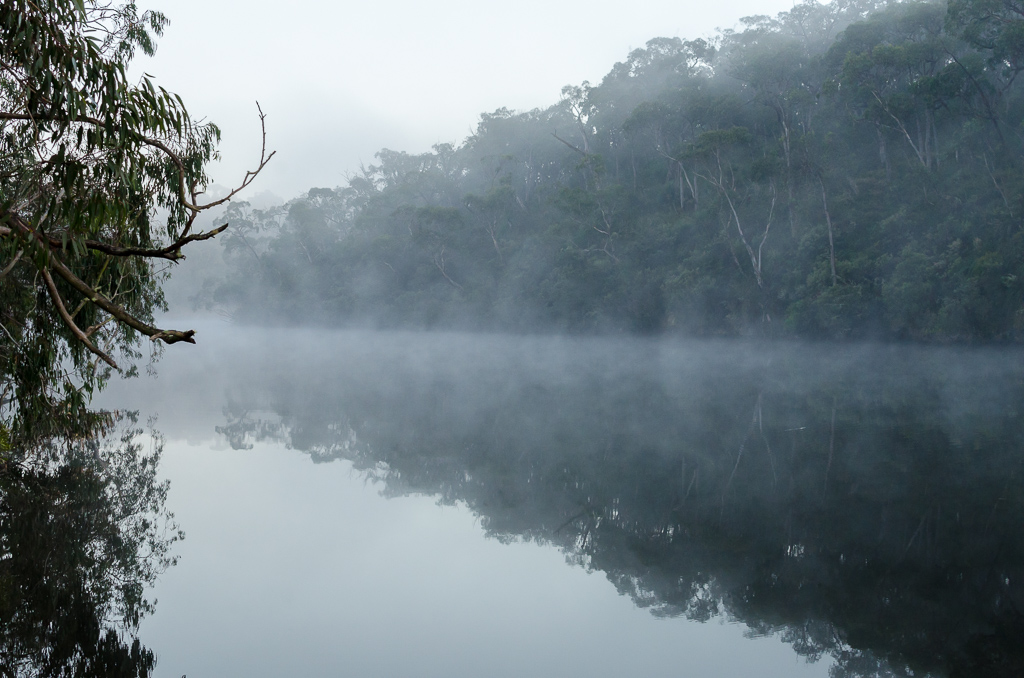 Anyone who has any idea about the Great South West Walk will look at the post title and wonder, “What’s he on about?” The reason being is in theory there’s another two days walking between the Battersbys camp and the coastal town of Nelson, which sits at the halfway point of this hike. So, how do I explain what happened?

I guess there’s the thought Smuffin and I walked 35 km to Nelson and in doing so, knocked out a few days in one solid stroll like a couple of wild-men. Mm… How about another idea along the lines of, “I give up”? If you’re leaning towards the latter, whilst eating your Corn Flakes, you’d be right.

The combination of blisters and sandal walking (I can’t go over again why it reached this point. I’m sorry, but you’ll have to read the previous posts to work out what happened. Hey, is this the longest piece of waffle you’ve ever seen in brackets before? If I write another sentence it’ll easily be one of the world’s longest. Was that last sentence one too many? What about this one?) wasn’t really enthusing me too much and the thought I had at least another 150 km to go with that footwear set-up was quite intimidating.

So, a plan was made to walk directly from Battersbys to Nelson and skip a couple of legs of the walk. I’d have a day to put the feet up and hopefully re-mojo myself. We were a little short of time anyway, if wanting to do the walk exactly according to the track notes, so we elected to go for the shortcut plan. 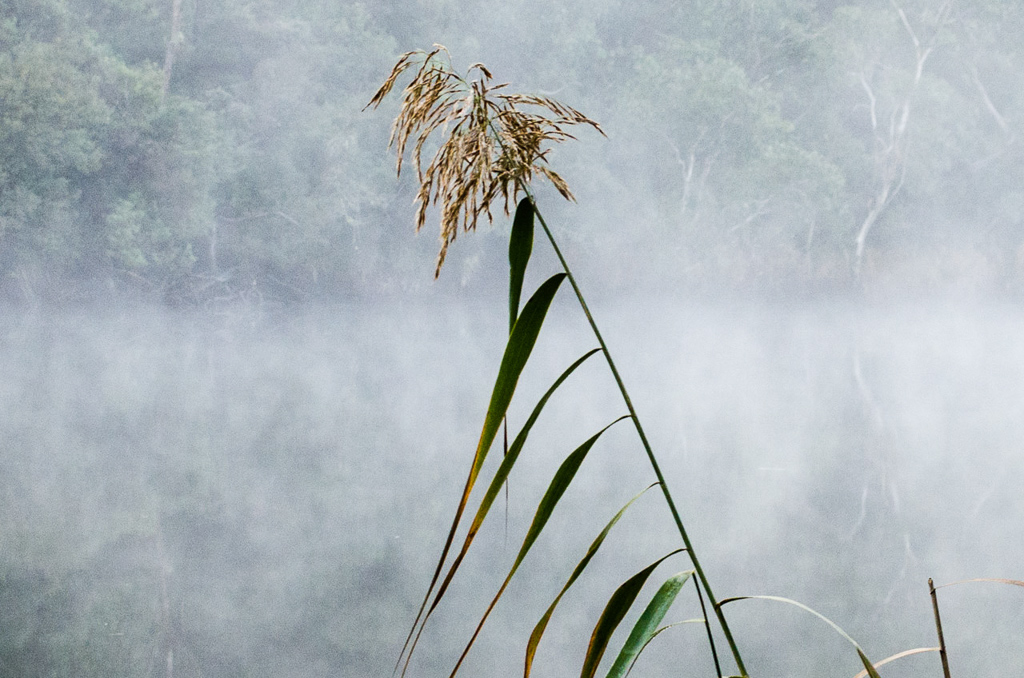 The night at Battersbys was a pretty good one and compared to the previous evening we were prepared for the cold, as once again the temperature plummeted with the clear sky overhead. The chilly morning did give us a nice sight of the Glenelg River covered in mist and with a small jetty about ten feet from the camp, it was the place to be to drink the morning brew and snap a few photos.

The riverbank opposite was also in a handy position for the sunrise, as beams of light pierced through the trees and mist. 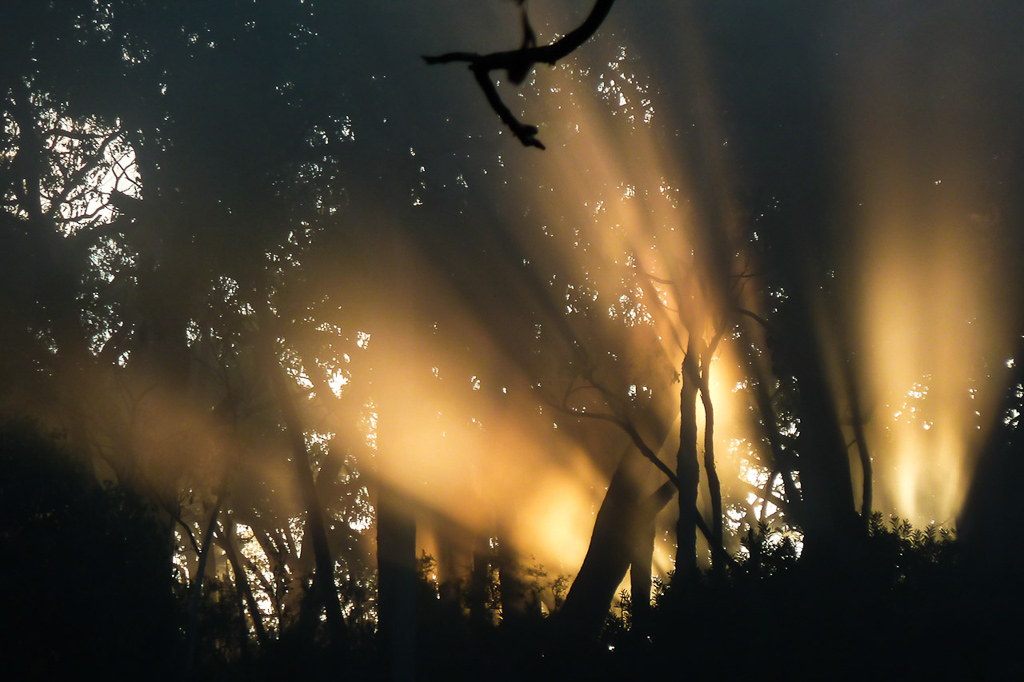 It looked great, but there’s a point where the light just stops giving and one should put the camera away. The trouble is though, I’ve never given in that easy which may explain why I have about a zillion photos sitting on multiple external hard drives. Brevity and camera is not in the fiasco lexicon, so according to my reputation, I continued snapping pictures of the morning sun until I was in danger of having my retinas sizzled. As a consequence, the photographic results are a little problematic. Lens flare and all. 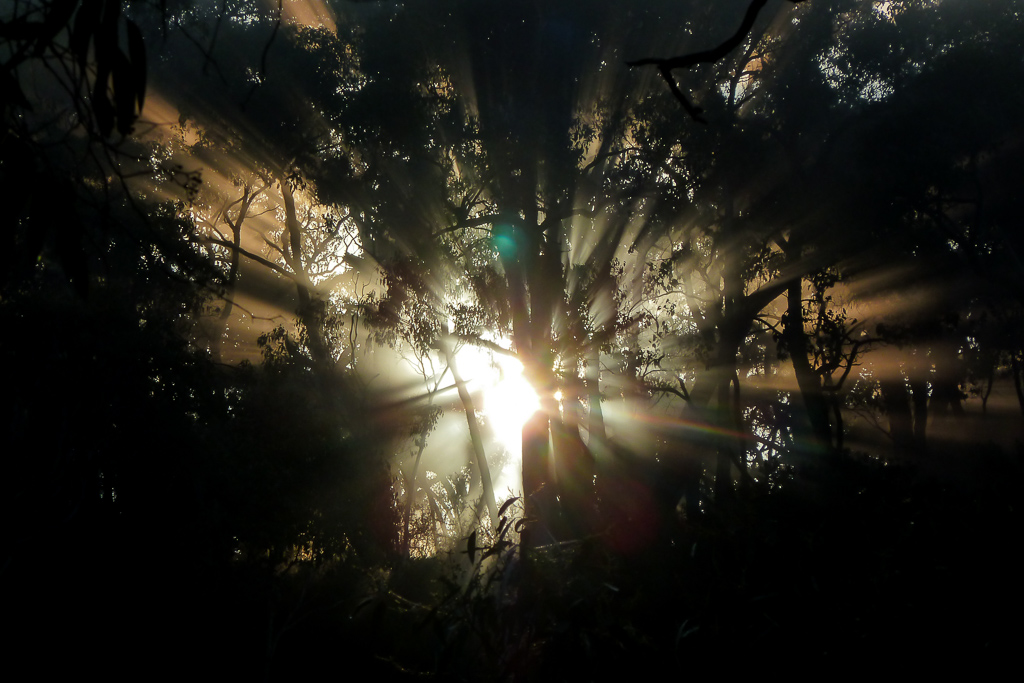 This is going to be a short day, so I might sneak in a few photos here and there to pad out the post. Here’s some reeds by the river… 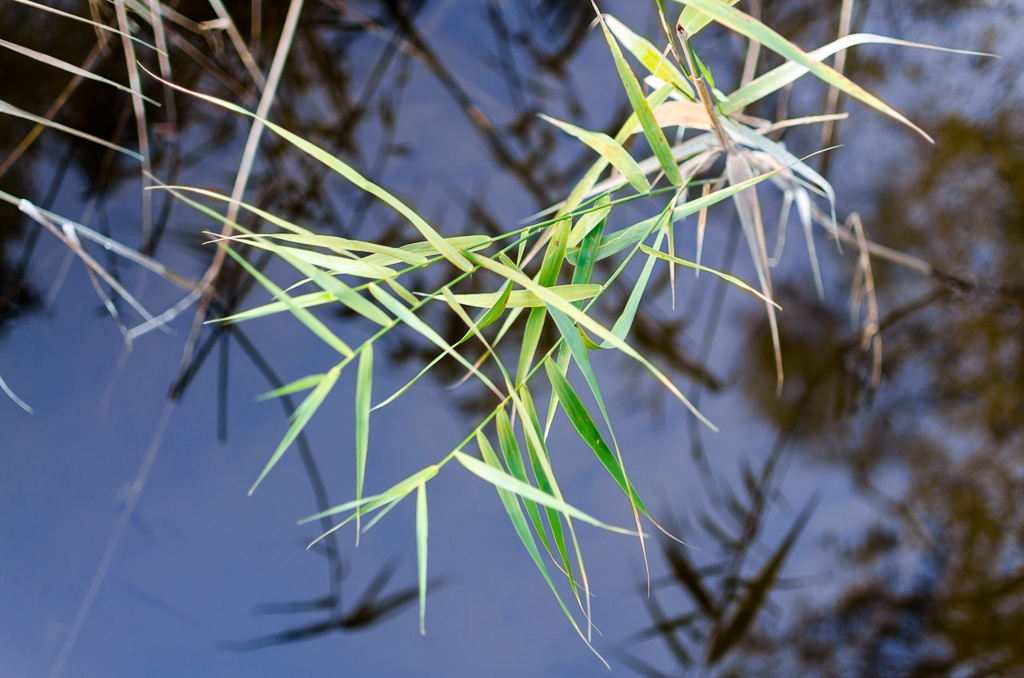 …and what looks like a kookaburra feather, which was lying nearby. 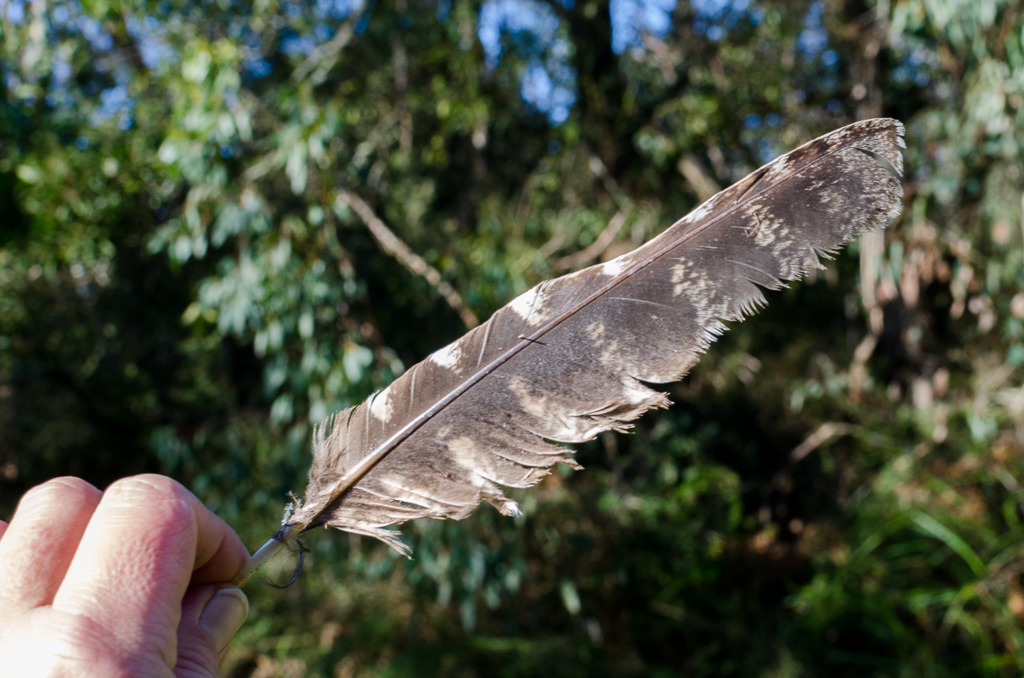 The shortcut route for the day was to follow the GSWW track and then switch to forest roads for a direct route to Nelson. This meant the scenery might be a little duller, but at least the empty dirt roads would make it easy walking on my feet.

When we set off the track climbed and there were some nice elevated views of the Glenelg River with the mist still clearing. 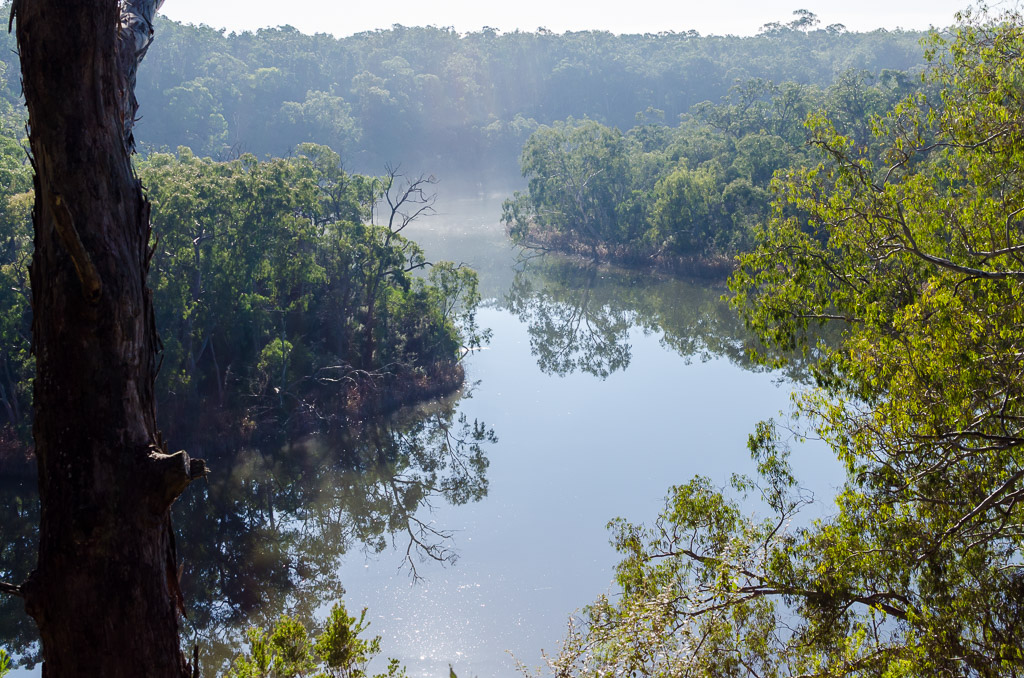 The track weaved between trees… 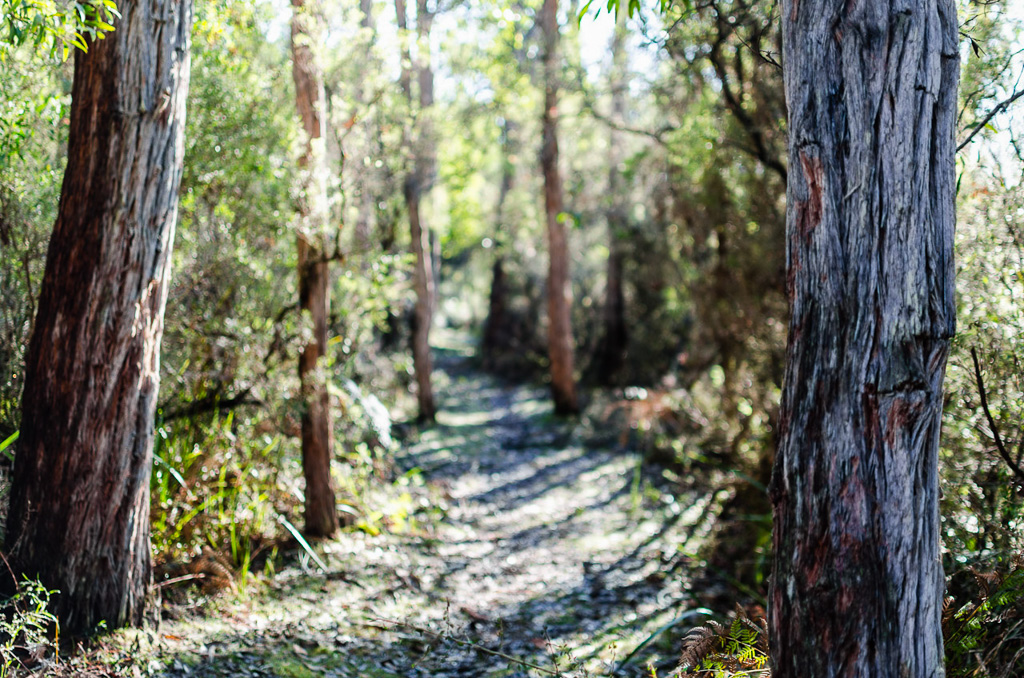 …and some branches looked my fingers after a night on the keyboard typing these infernal posts. 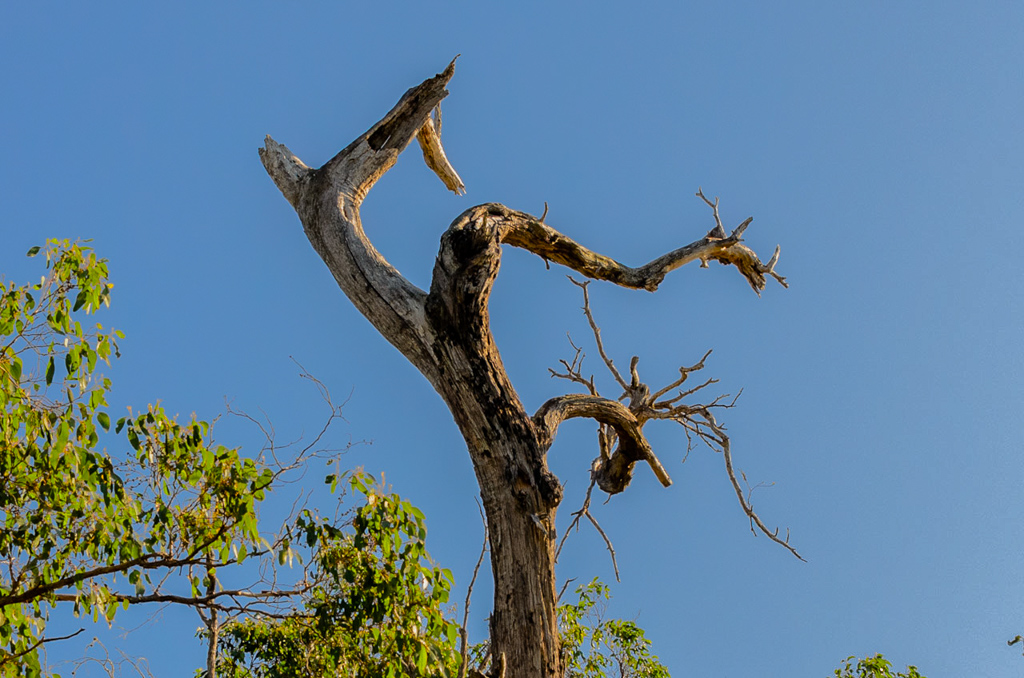 We did enter a world of Xanthorrhoea which sounds pretty frightening, but really it’s just the hip name for grass trees. I must say, some of the flower spikes were pretty impressive. Smuffin slipped into this shot for a homemade walking stick/flower spike comparison. For your information regarding scale, he’s 7ft 6 in tall. 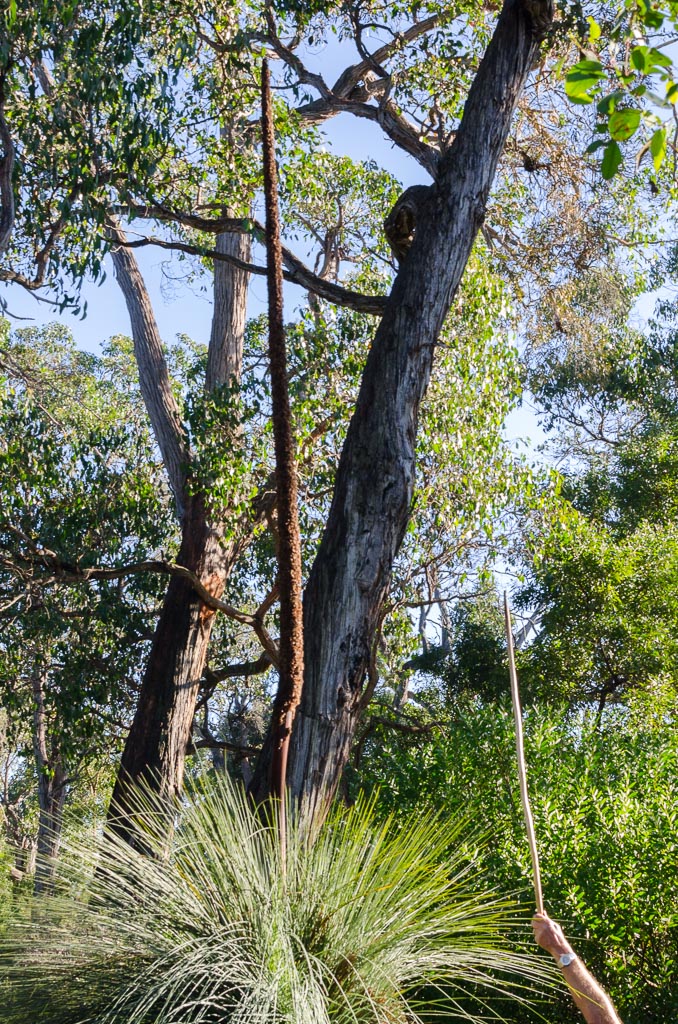 That last one was pretty mighty in its vertical growth, but others adopted the curly approach. 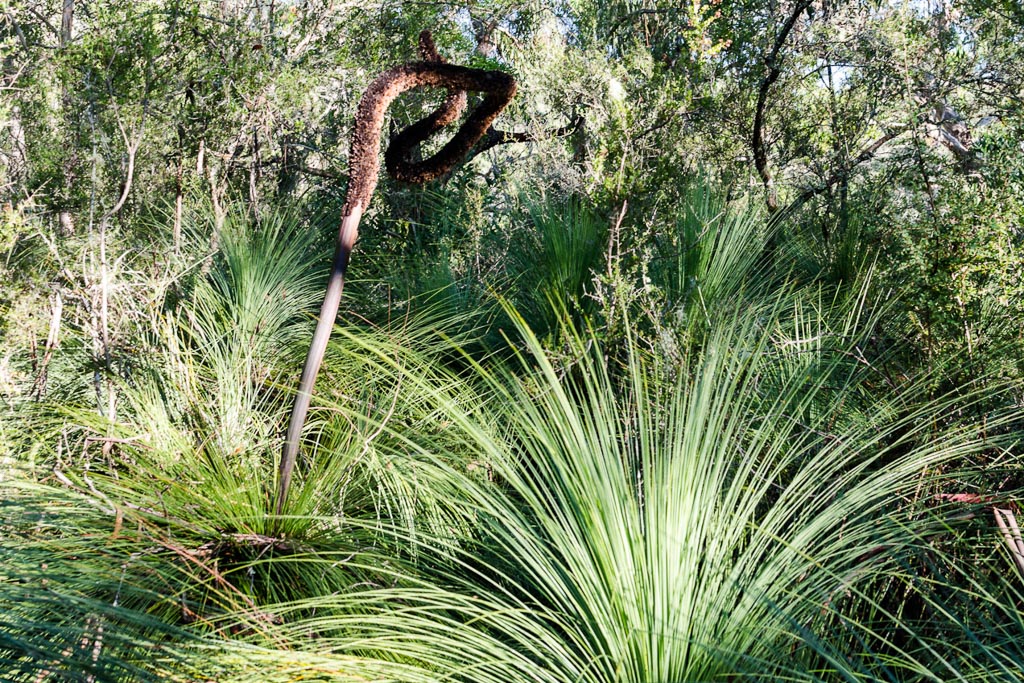 The early morning sun was also creating a nice glow on the surrounding, bare branches of trees. 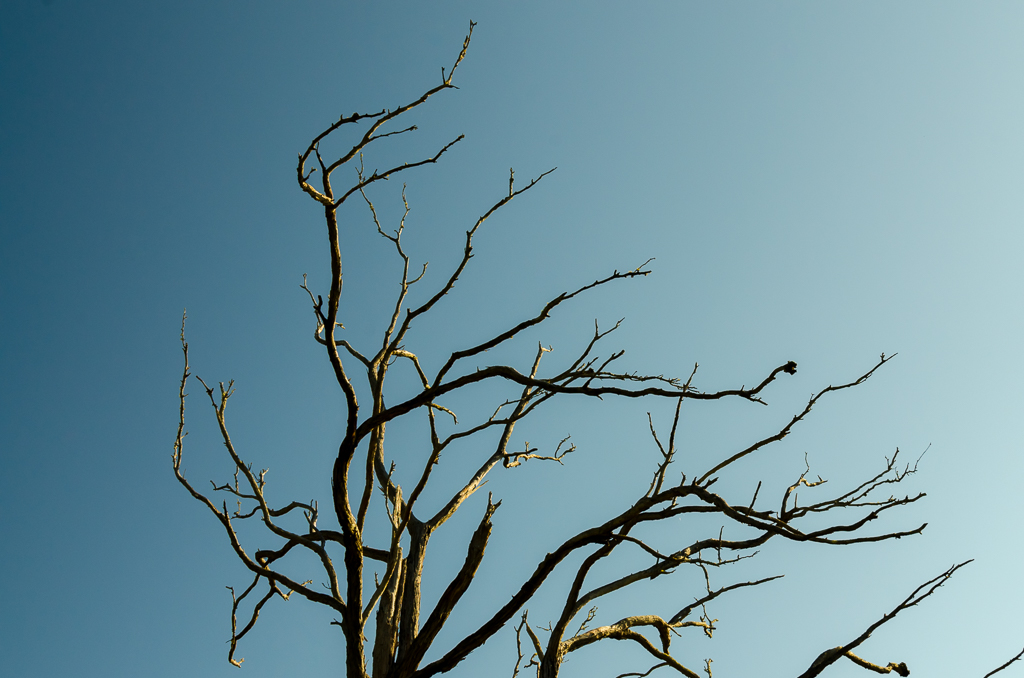 After about an hour of strolling we left the official GSWW track and took to the surrounding roads. 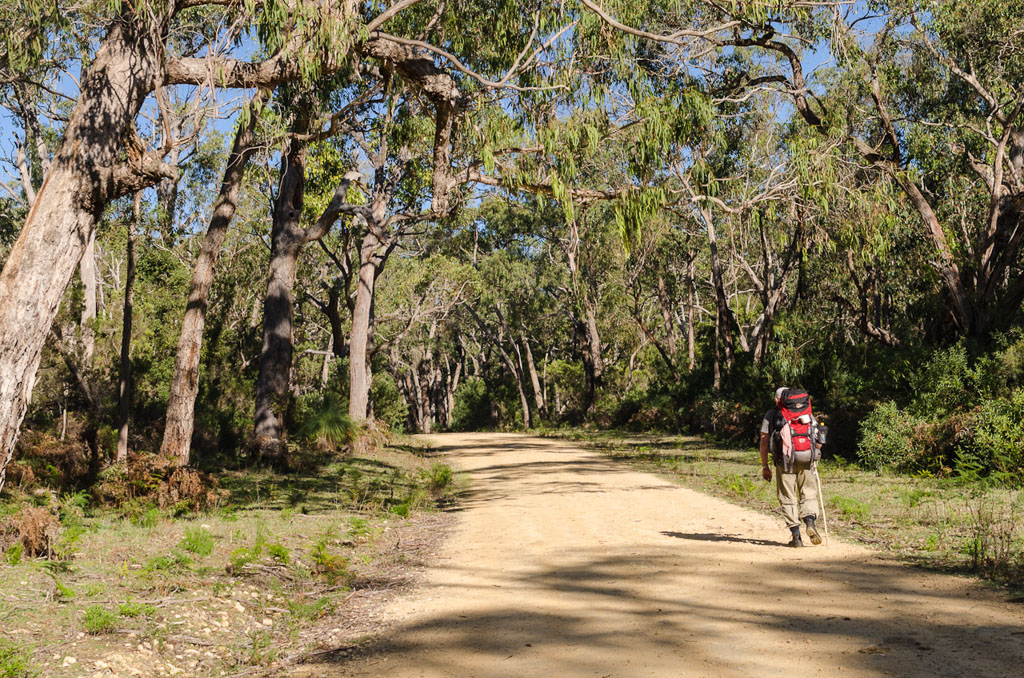 There was absolutely no traffic, so it was definitely casual walking. In fact it wasn’t too bad as there were areas next to the road full of grass trees to look at. In fact it was getting a little out of control, as I don’t think I’ve seen so many in the one spot. 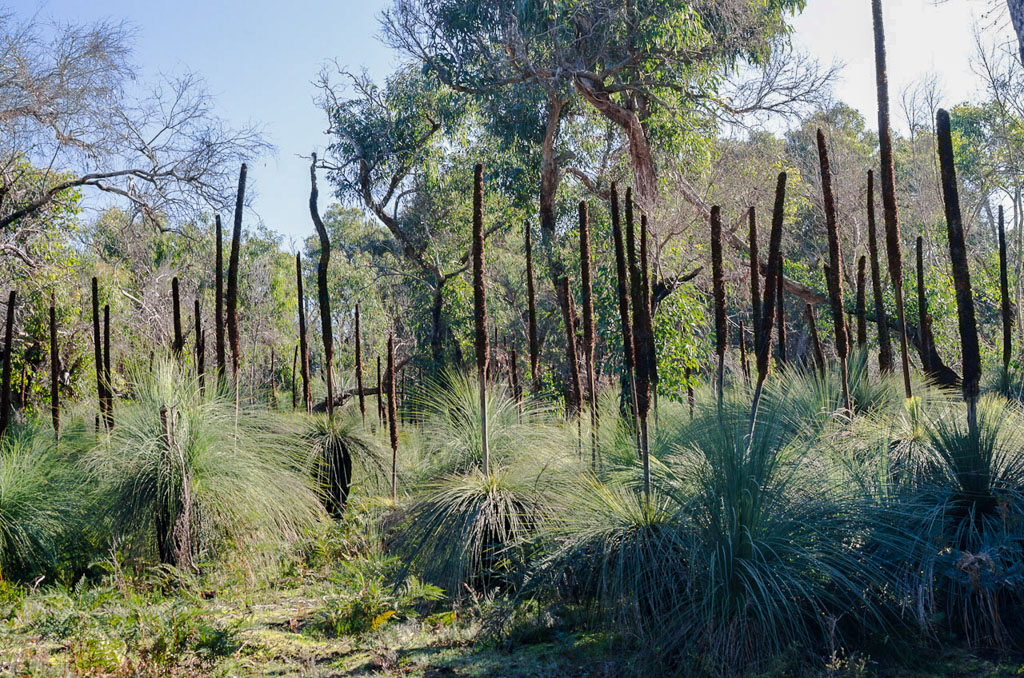 There’s a vast area of pine plantations around Nelson which has created a mishmash of tracks that are used for logging. The decent views had dried up through here… 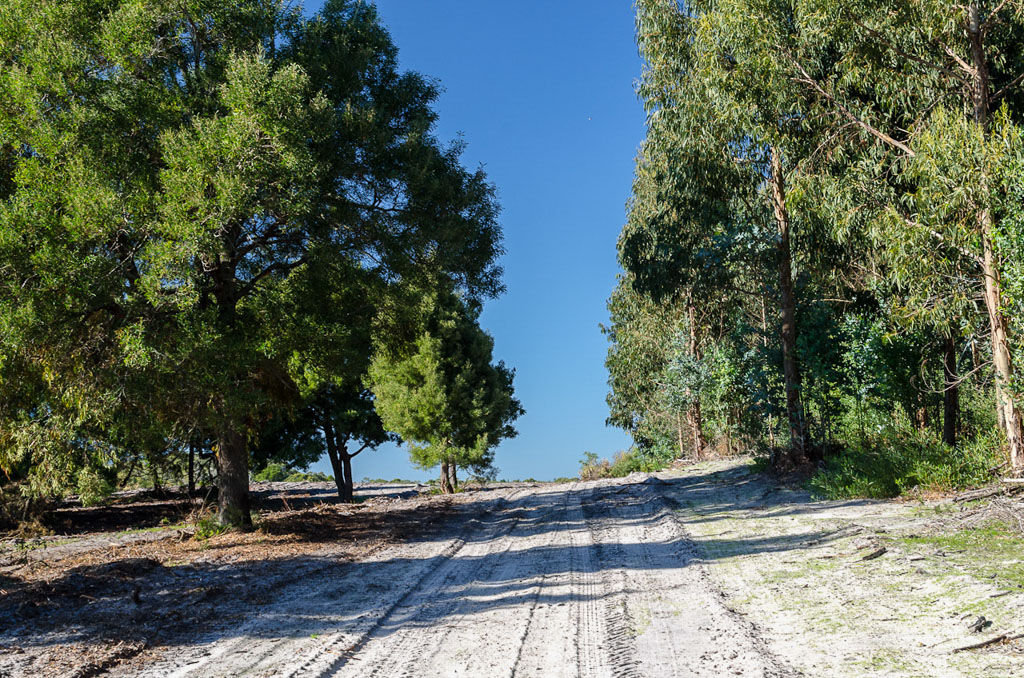 …as we followed the sandy tracks. 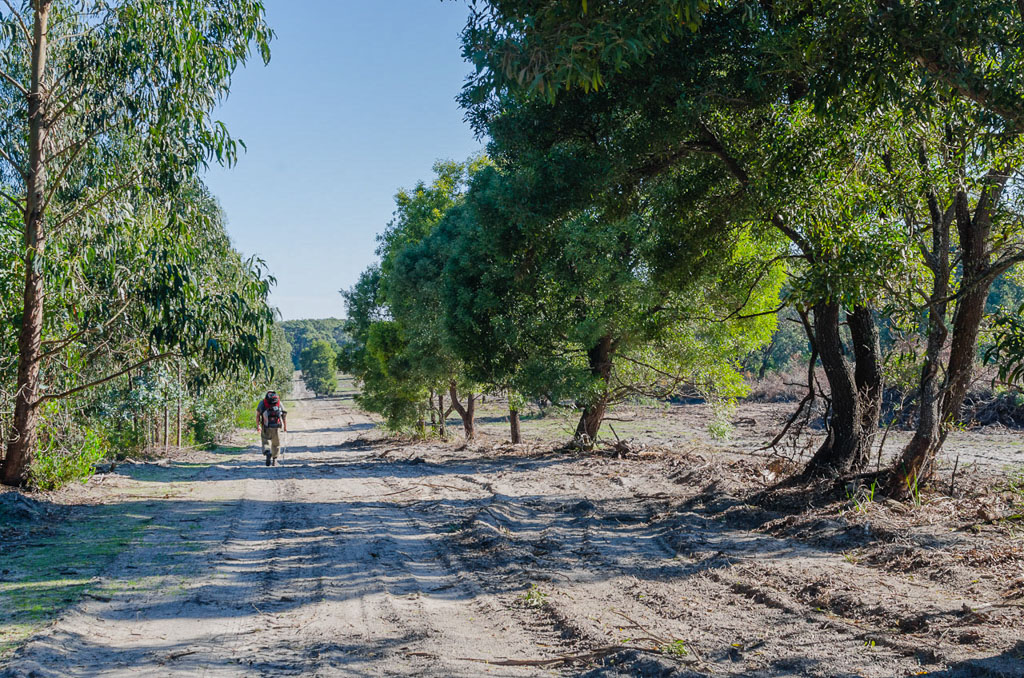 It was during this uninspiring section that a long delayed bolt of lightning hit my brain and it carried the message of, “What are you doing?” Every step was painful and I knew a few days were needed for the blisters to heal which is time we didn’t have. I was moving too slowly now and in an instant reached the decision to call it quits, which seemed the logical thing to do. The fun had gone from the walking, so I elected to call it a day at the halfway point of Nelson.

Actually, due to that decision, there seemed absolutely no point even walking for the rest of the day. So, upon reaching Glenelg Drive… 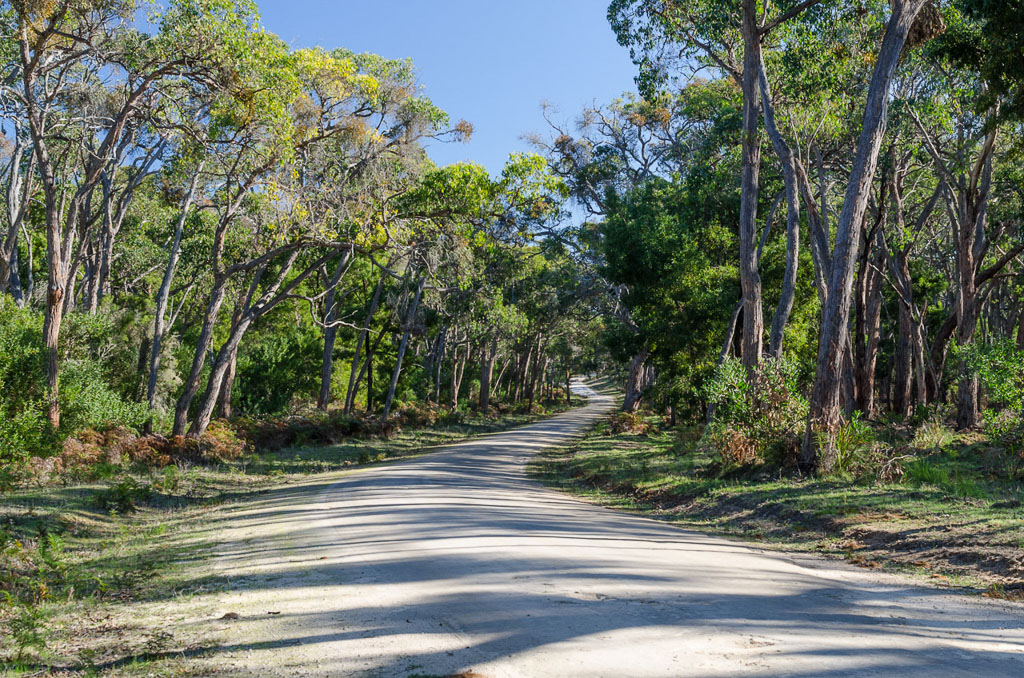 …it was time to utilise Lady Smuffin who picked us up a few kilometres from Nelson. Now, attentive to the blog consequences of being labelled a wimp, Smuffin was chuffed that it was me who quit and not him. “You soft bastard!” was the allegation and I really wish the bloke who writes this blog wouldn’t be so harsh on me, but what can you do? He must be a prick?

We headed into the big smoke of Nelson and settled down in the sun to reflect on the hike. We’d covered 92 km, with the last 30 or so in sandals.

So, what’s in the wash-up? Well, I certainly learnt a footwear lesson and since this walk I’ve been too scared to wear anything else on a hike other than my Milton the Monster leather boots. Some of the stuff I took worked and others didn’t. I might actually lash out and write up a full post about that at the end of it all. Aha! “Isn’t this it for this hike?” you’re probably asking?

No, of course not, as while back in Melbourne for about ten minutes, a new plan struck me. Getting defeated by a walk is annoying and I made a pact to give the GSWW a serve of whooparse. So I elected to put the feet up for a week to heal and return to Portland and finish the walk. Oh yeah, I wouldn’t start where I’d finished near Nelson, but to go back and do the whole shebang from the very start. A bit bizarre? Didn’t I mention that besides being a prick, the bloke who writes this blog has some odd ideas at times…?

Well, you’ll be pleased to know there’s only about twelve (!) GSWW posts to come. Even I need to break it up a little and I’ll look at some different stuff in the next few weeks before returning to Portland. Lastly, I believe this post has set a world record for the fearsome abuse of ellipsis. There are so many in here, even I’ve lost count. Hopefully I can improve on that in the coming weeks and include a few more hundred…

How about a picture to finish? Okay, here’s the Glenelg River as it meets the sea at Nelson… (another one) 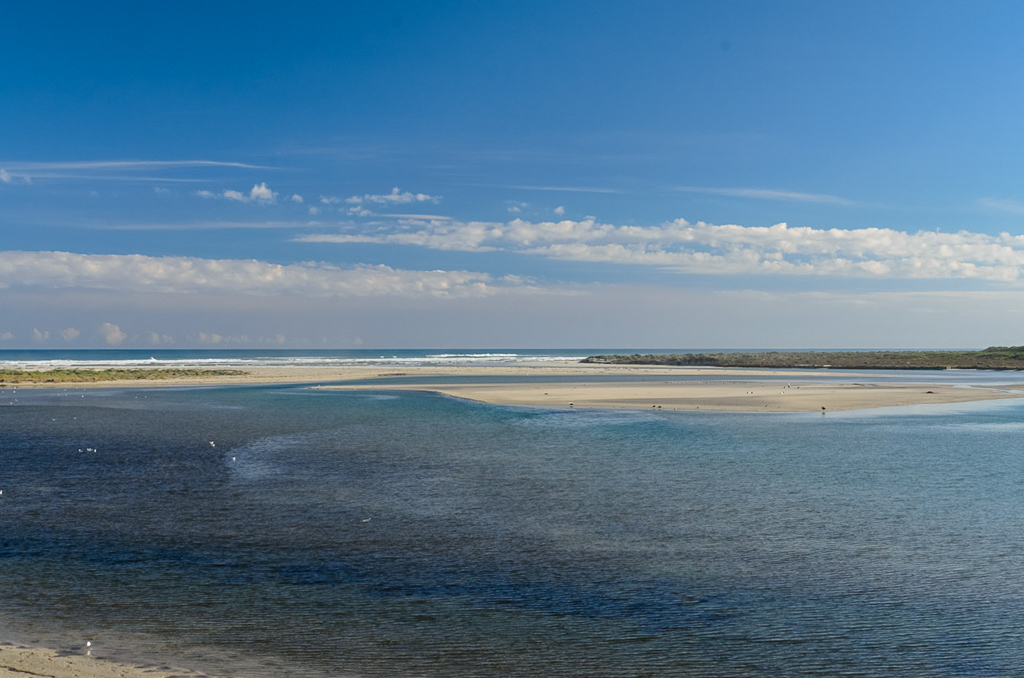