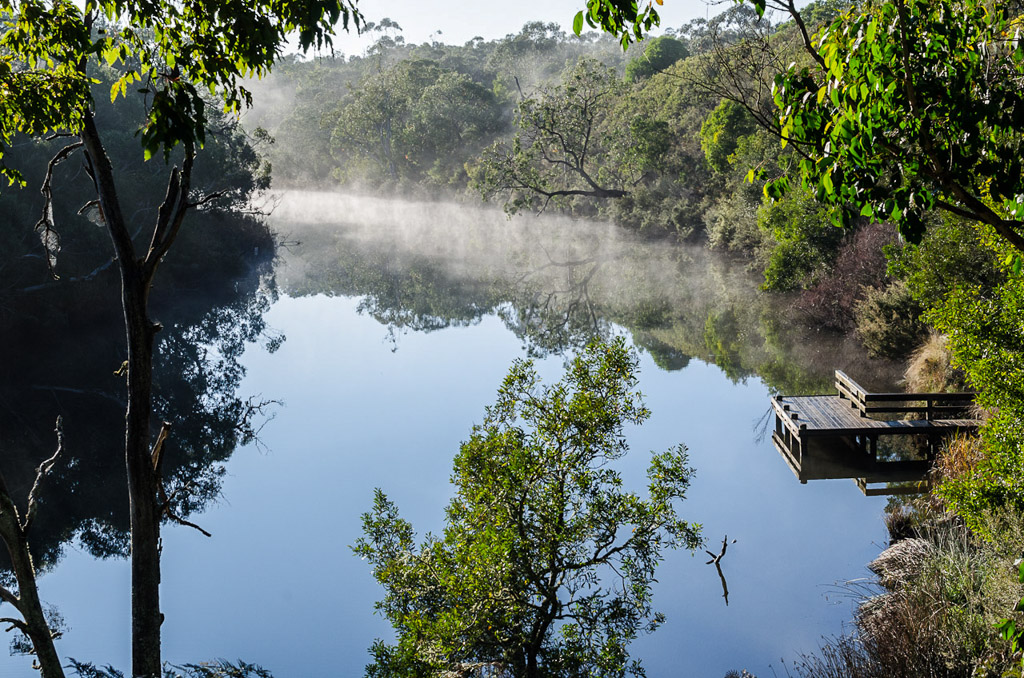 Here we go again with another stage of my ill-fated first attempt at the Great South West Walk with hiking sidekick ‘Smuffin’. Actually, I’d rather get to the successful tilt and eliminate this initial saga from my memory bank, but being a dedicated blogger I’ll go through the process and write up the whole thing. See what a good bloke I am?

I must say though, I’m a little confused about this particular leg from Moleside Camp to Battersbys, which follows the Glenelg River. I thought I had a huge swag of tasty photos to process. It was only later when I realised I’d hardly taken any pictures at all. I put this down to suicide contemplation, due to a combination of blisters and a shoe detonation, which had occurred the previous day. I was now reduced to hiking in socks and sandals. Sandals as I had nothing else to wear and socks because I’m very stylish. Anyway, it ended up being a bit of an uncomfortable day and with the lack of photos you’ll again be let off with a shorter post.

The weather for the preceding days had been pretty consistent. Overcast sky, constant drizzle and no wind at all and this is how it was when we went to bed at the Moleside Camp. Well, things certainly changed overnight when I was snoozing, as I suddenly awoke with a lump in my throat. After a drowsy session of repeated coughing in an attempt to clear it, I suddenly realised the lump was actually my testicles. At some point in the early morning the cloud had lifted and as a result all warmth had been sucked out into the now clear sky. It was absolutely freezing and I paid the price of going to bed in the ‘lounging around’ position of sleeping bag only covering my legs.

Well, at least I was in a tent, as Smuffin elected to go the ‘wild man’ option of sleeping on the table in the shelter. This isn’t a bad idea if the weather is quite mild, but he found as the morning became colder and colder he had to put on every item of clothing that was available. He did have a chance to warm up a bit, by having to combat a possum that came to knock off anything we’d left lying around in the shelter. On such a freezing morning, I’m a little surprised he didn’t knock it on the head and utilise the possum as a scarf.

The bonus though was the clear sky finally brought the sun. We hadn’t really seen it for a few days and it was nice to see it rising above the trees opposite the river.

Oh yeah, sunshine also means it was time to wheel out the polarizer. 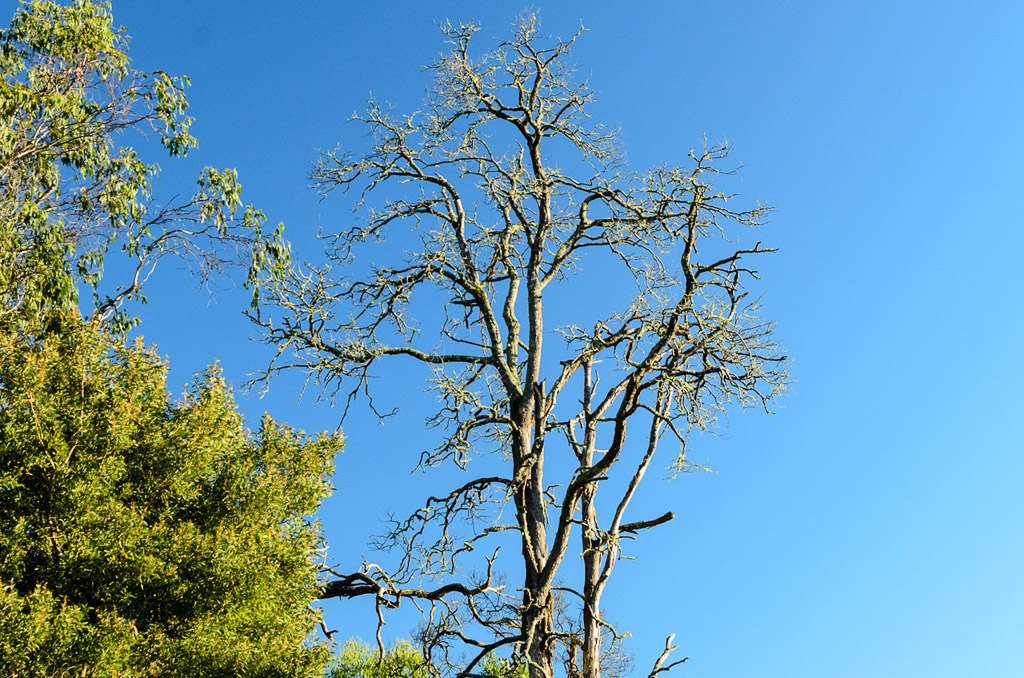 Before heading off, I must mention the traditional perusal of the walkers intention book inside the shelter. It seems we weren’t the only ones having to tackle the leeches, but the difference is no one seems to be able to spell them properly. Smuffin being the grammar guru, couldn’t resist correcting this comment. If you think that’s mean, we actually went easy on this entry, as the ‘leaches man’ spelled the next camp site of Battersbys incorrectly as well, not to mention the random apostrophe. 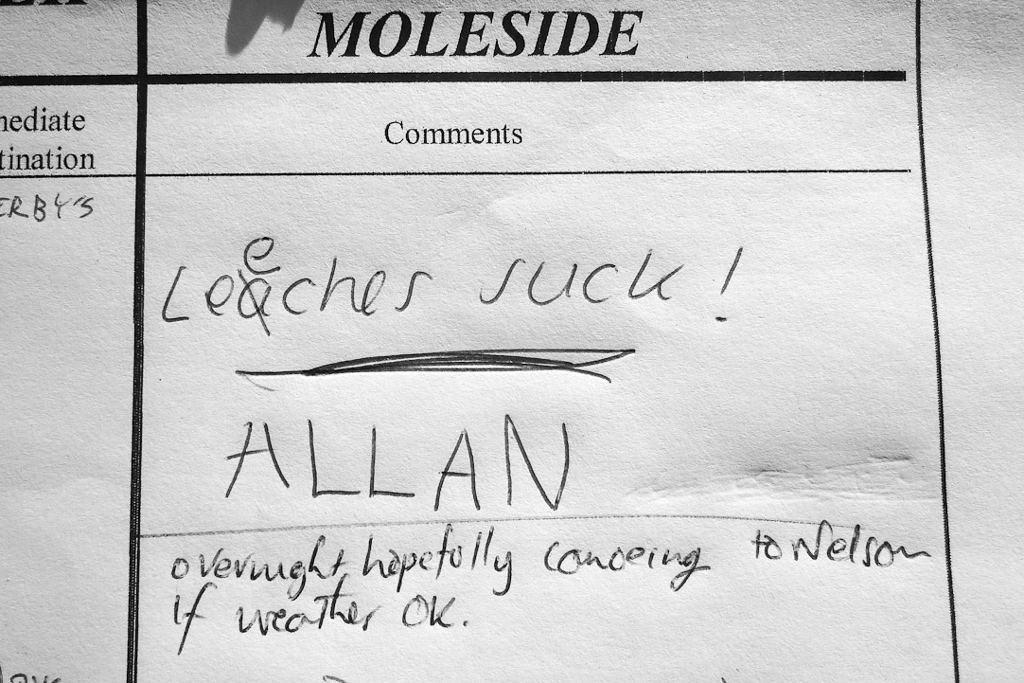 Walking out from Moleside was pretty standard fare for the trip so far. Leaches. Leeches. The difference was the odd leech that did manage to cling onto my feet were snared in the gleaming white, early warning sock system and then instantly sent into low orbit with a rifle crack sounding flick of a finger. This section though, did account for the lack of picture taking, as we barely stopped.

The track undulates next to Glenelg River and there were sections where we were back surrounded by trees, but it had a different atmosphere compared to the previous few days in Cobboboonee Forest. Maybe it was just the sun that did the trick? At times the track ambled down to board walks at river level. 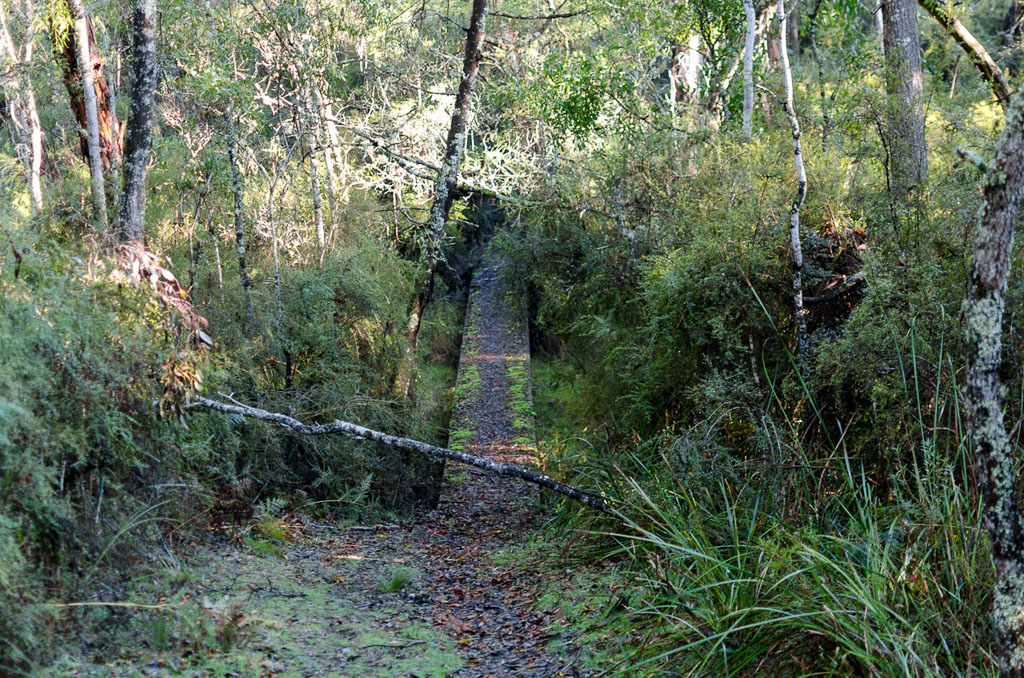 These boards were always wet and greasy to walk on, but luckily they’re covered for the most part in steel mesh for a bit of grip. That was until Smuffin said, “It’s beauti…” and without even being able to finish his sentence he was lying on his back, chest and side. All at once. I’m not sure how he survived, as he went from upright to pancaked on the ground in no more than 0.14 of a second. How did this happen? Well, on this particular board he stepped on the only piece of timber that wasn’t covered in steel mesh. 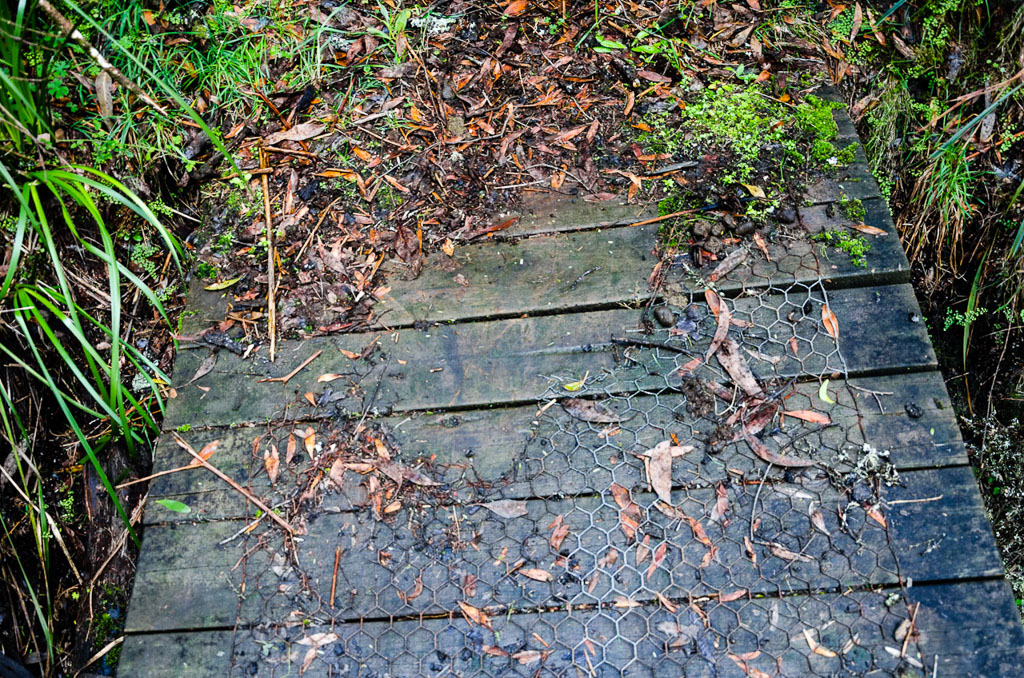 That one little gap in the mesh is all it took

You know what? Even though I’d seen him fall over and knowing that little gap was slippery, I still had trouble remaining upright as I walked over it. Definitely a morning highlight, but I still don’t know why I didn’t take a photo of Smuffin lying on the ground at a strange angle? I guess the main reason is I thought he may have been dead.

Anyway, the sandal strolling wasn’t too bad I guess and the vegetation did begin to change meaning there were less leeches. This gave me an opportunity to take a few more photos off the track. 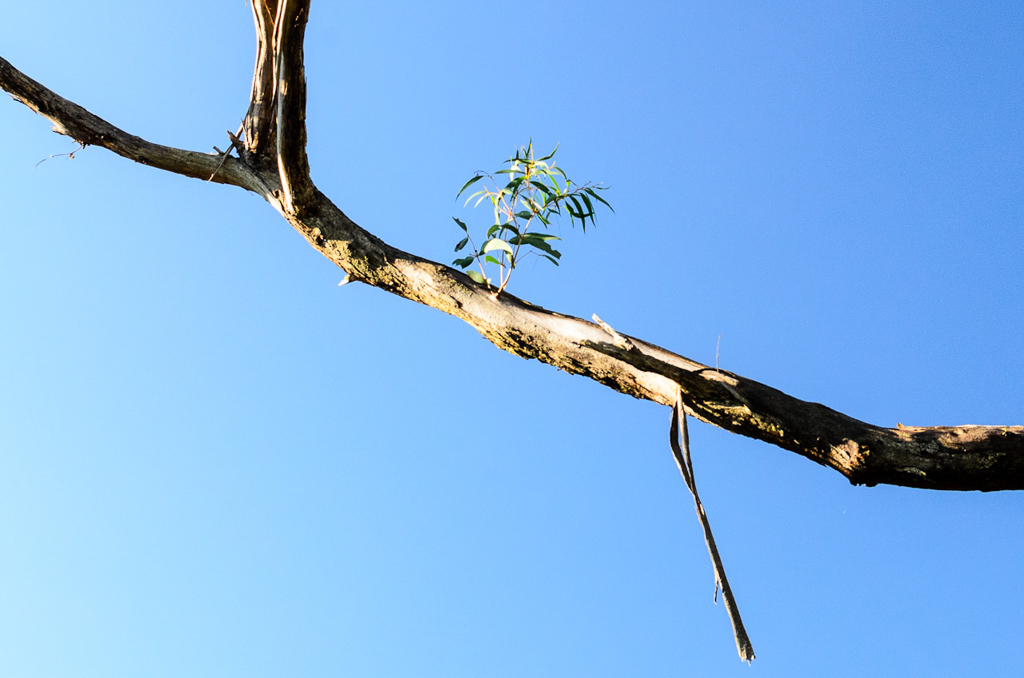 Again, the theme of the walk was a comfortable, well formed track. It makes for relaxing walking not having to stumble on rocks and exposed tree roots like some of the other walks I’ve done lately. They’ll be revealed in posts to come. 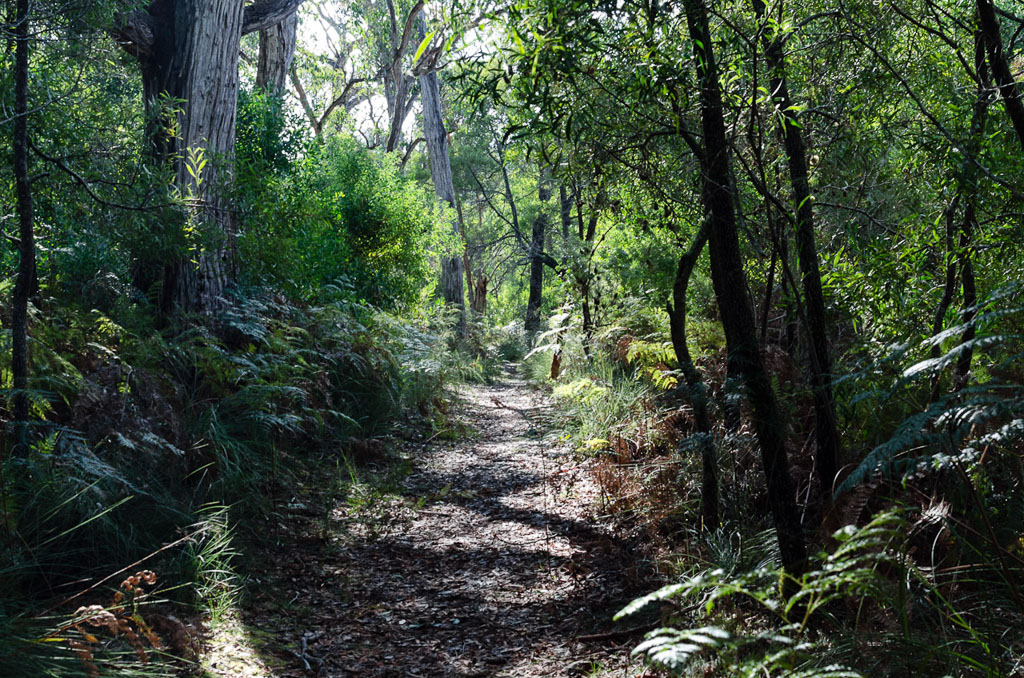 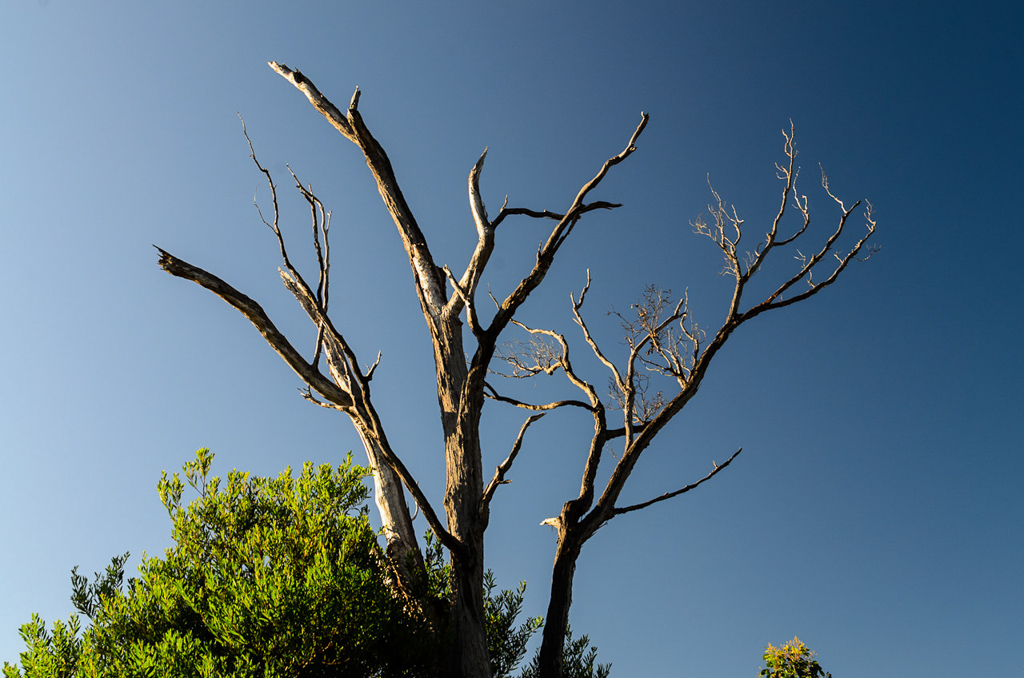 We reached Saunders Landing which was a perfect spot for a lunch spot. Sitting down on a small jetty in the sun was pretty relaxing, plus it gave me a chance to take some sandal reflection shots. 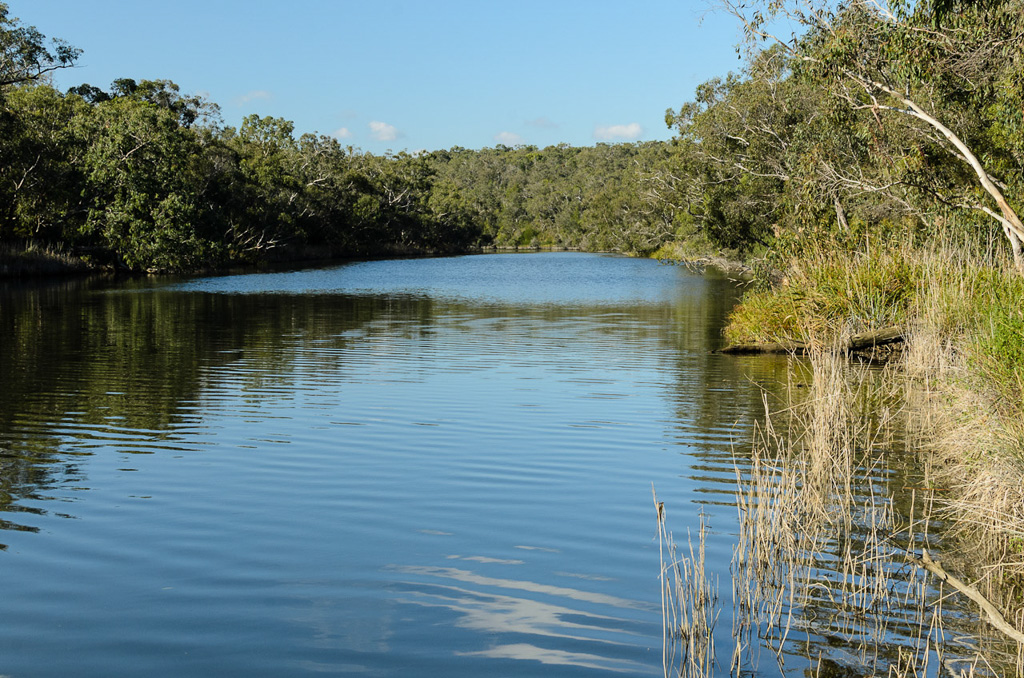 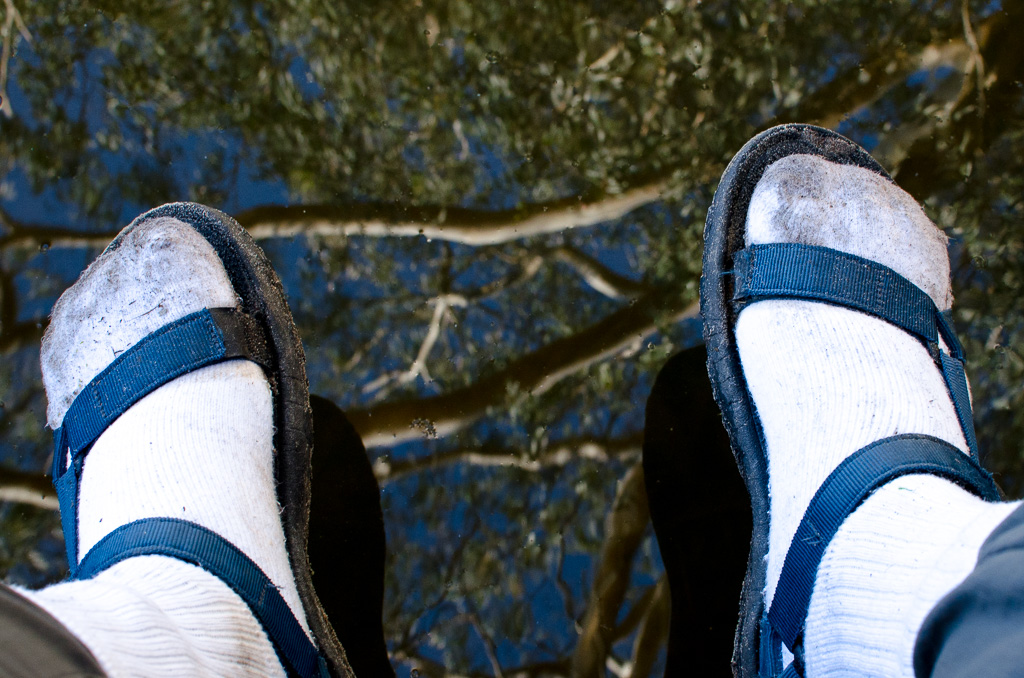 After lunch there was a casual climb away from the river which gave us some nice elevated views, plus the forest was still damp enough for the fungi to flourish. 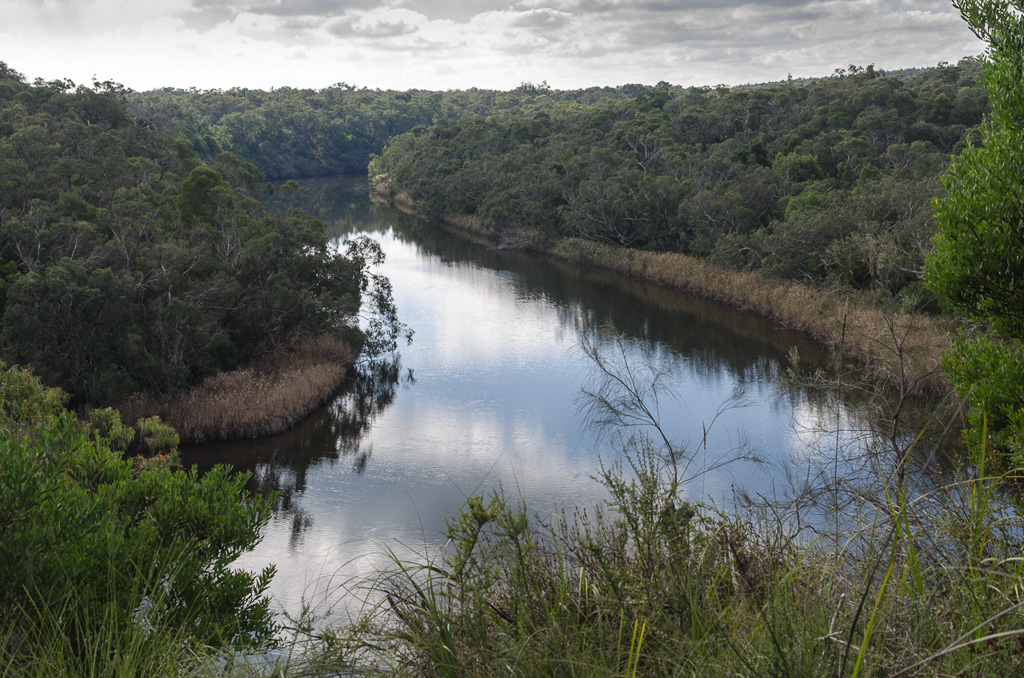 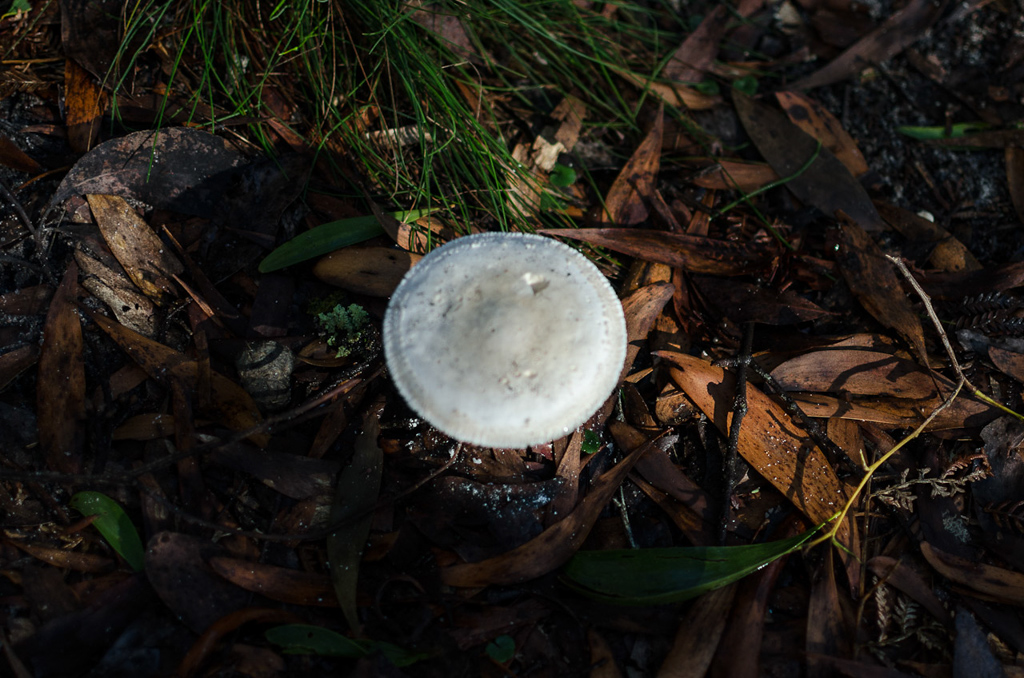 Actually, I keep mentioning on this particular day how nice the track was, so I might as well give you a few shots which show the variations in just one day of walking. 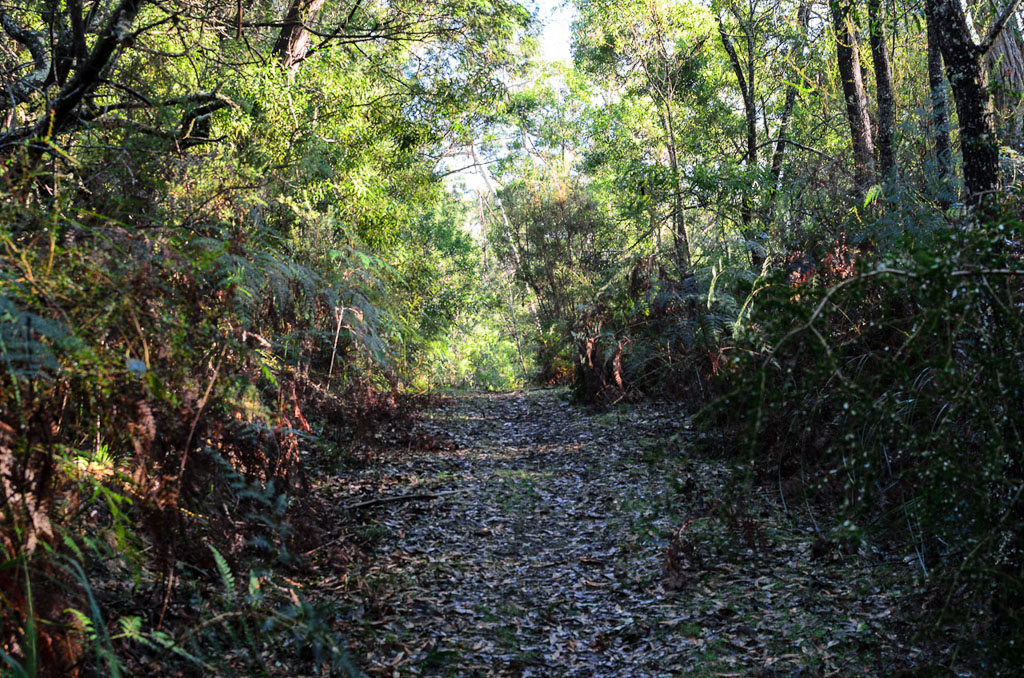 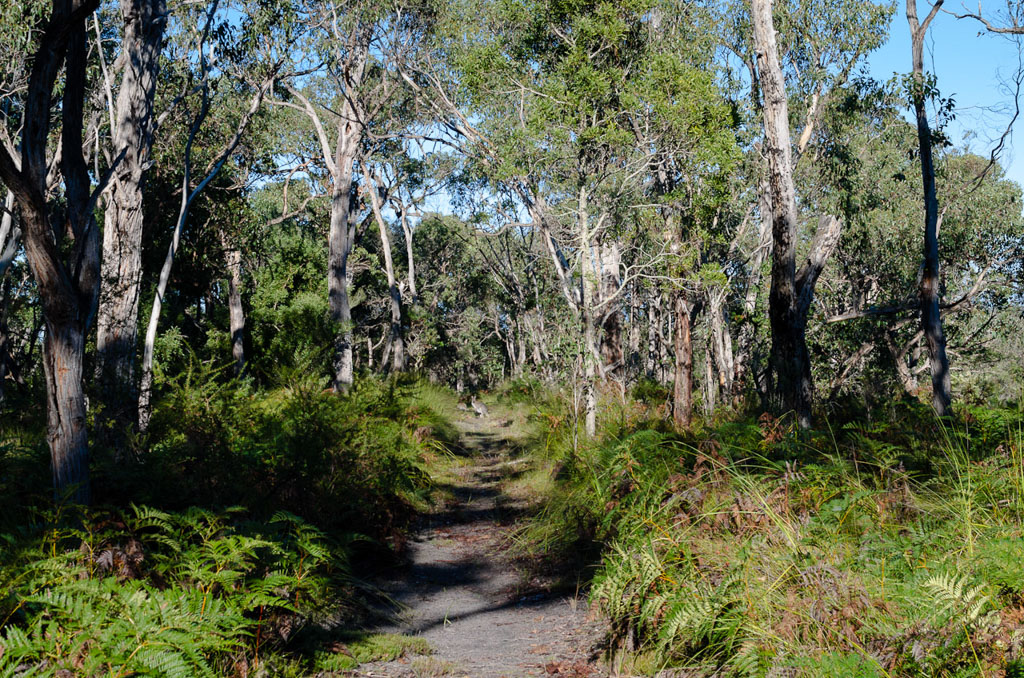 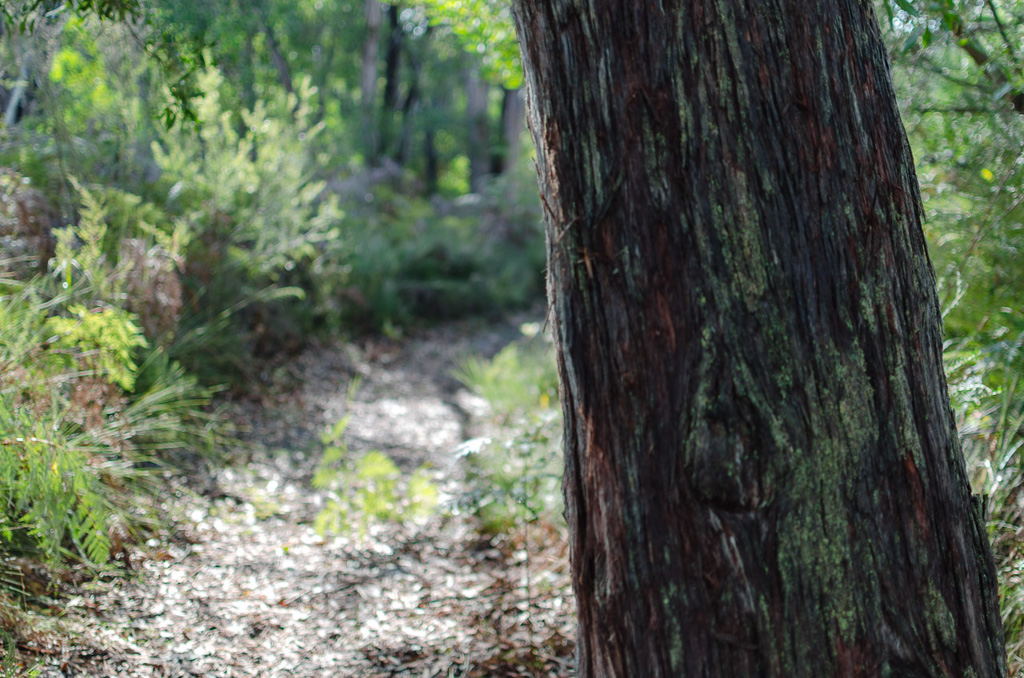 Considering how my feet felt, we made pretty good time and before we knew it we’d begun a slow descent to Battersbys Camp which sits at river level. There were of course the obligatory fungi to look at and this was a particularly impressive bunch at the base of a tree. 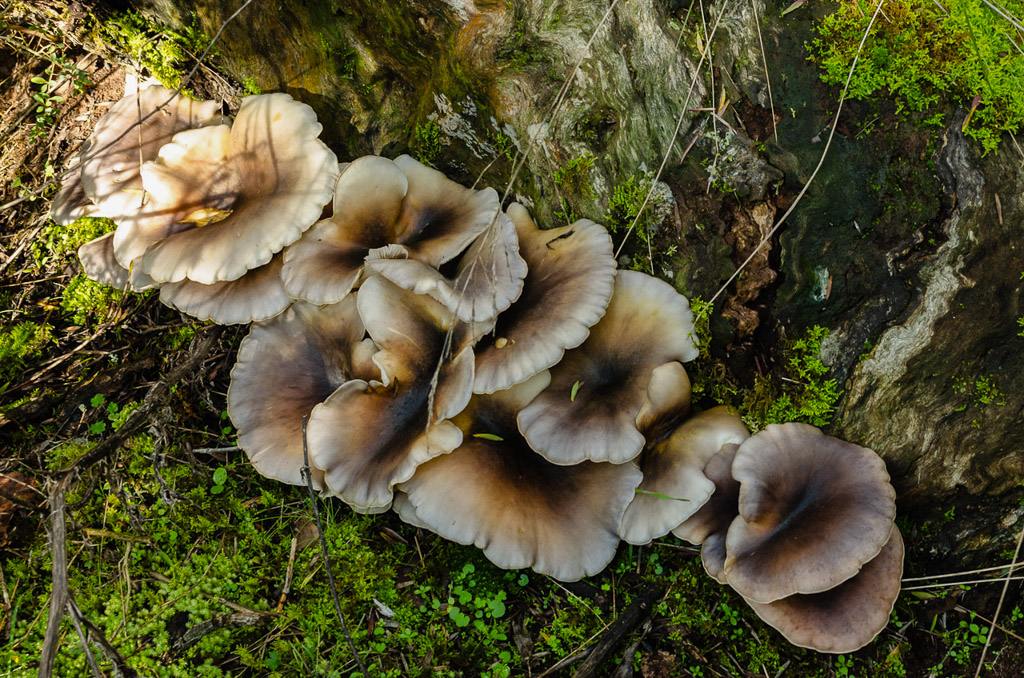 We reached Battersbys and were greeted by a couple who were the first people we’d seen all day. I was wondering how they’d interpret my interesting hiking look of socks and sandals. Do you know what? They didn’t say anything at all and believe it or not, but I don’t think they even noticed. What’s the world coming to?

The friendly couple were only visiting and I noted the bloke looked very ‘hikery’. You know, powerful beard and a traditional walkers body consisting of only prick and ribs. He did impress us though with his confidence in naming the bird life incorrectly. He went for broke when he said, “I love these Willie Wagtails”, when he was actually pointing at a Superb Fairywren. 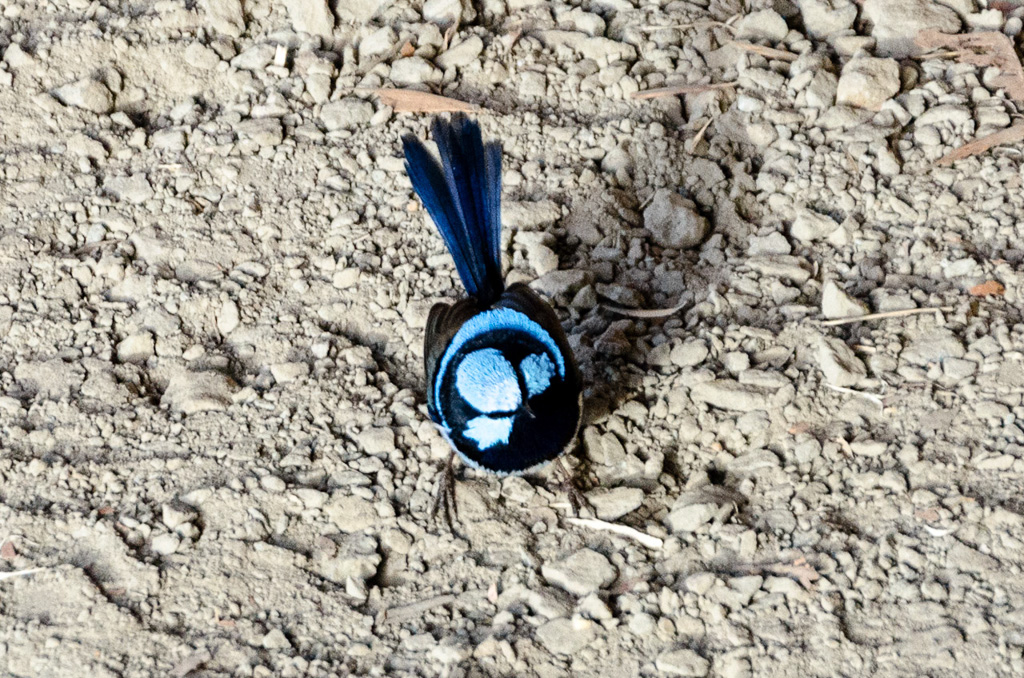 In saying our goodbyes the woman signed off with, “Keep looking up”. Mm… Was she really a fan of Jack Horkheimer? Anyway, they headed off, leaving us with the camp site to ourselves for another night.

Battersbys is another great spot with a small jetty to relax on to watch the sun go down. The water was very calm and I thought I’d go for some ‘bizarro reflections’. Here’s the rising moon with a piece of bark floating by. 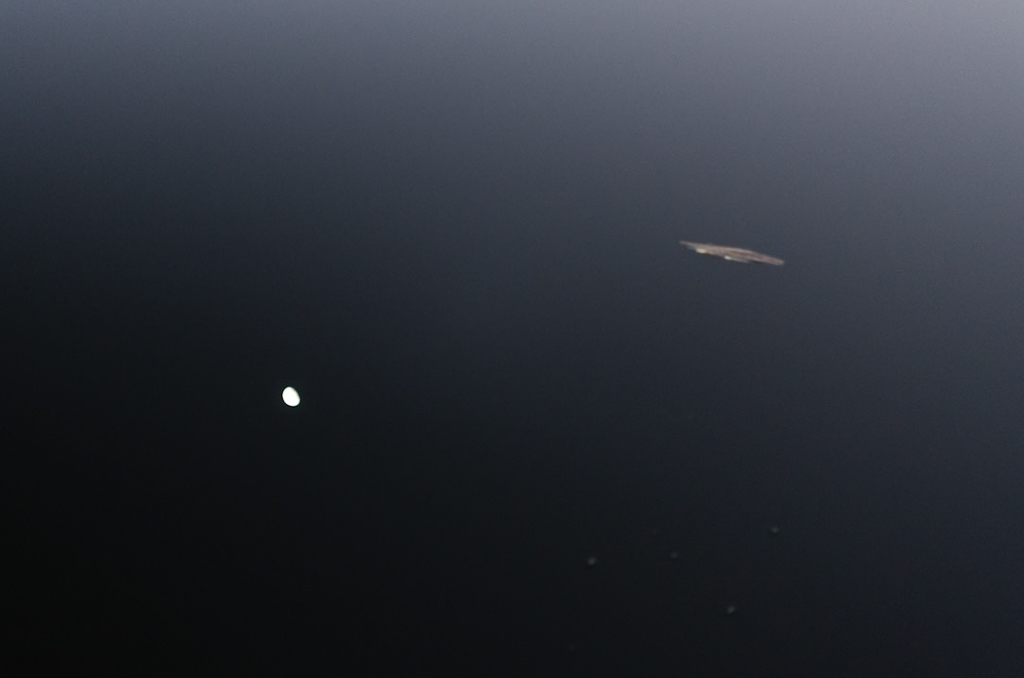 Even when I look at that photo now it makes no sense, but it did at the time. Anyway, the day was done and guess what? My feet were killing me. The socks and sandals were doing the best they could, but the Teva straps rubbed on the blisters all day. I really needed some down time to let them recover, but that was the major problem. We didn’t have the luxury of being able to take a couple of days off.

Before finishing, I was going to add the GPS reading for the day, but Garmin Connect has gone on the blink and I can’t embed anything to the blog. Well, I can, but it’s looking like hieroglyphics and you’ll need a portable Rosetta Stone to work out what’s going on. All you need to know though is the distance for the day was 19.16 km (not bad for sandals) and if Garmin resurrects itself I’ll update this post later.

Well, that’s it then. How about another reflection of the setting sun on the Glenelg River to finish off…? 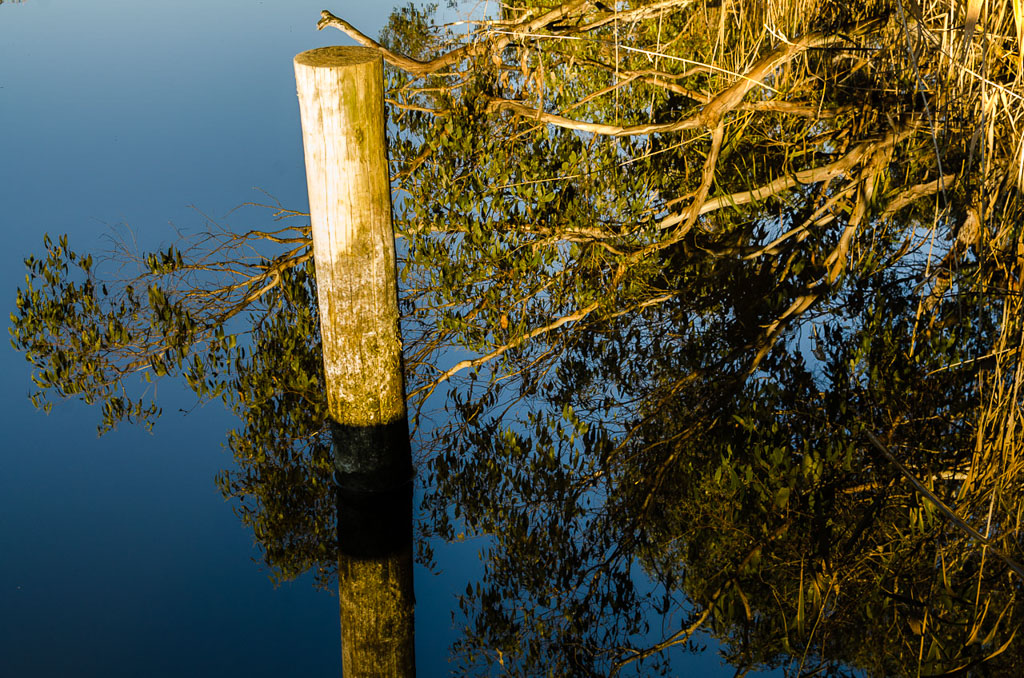