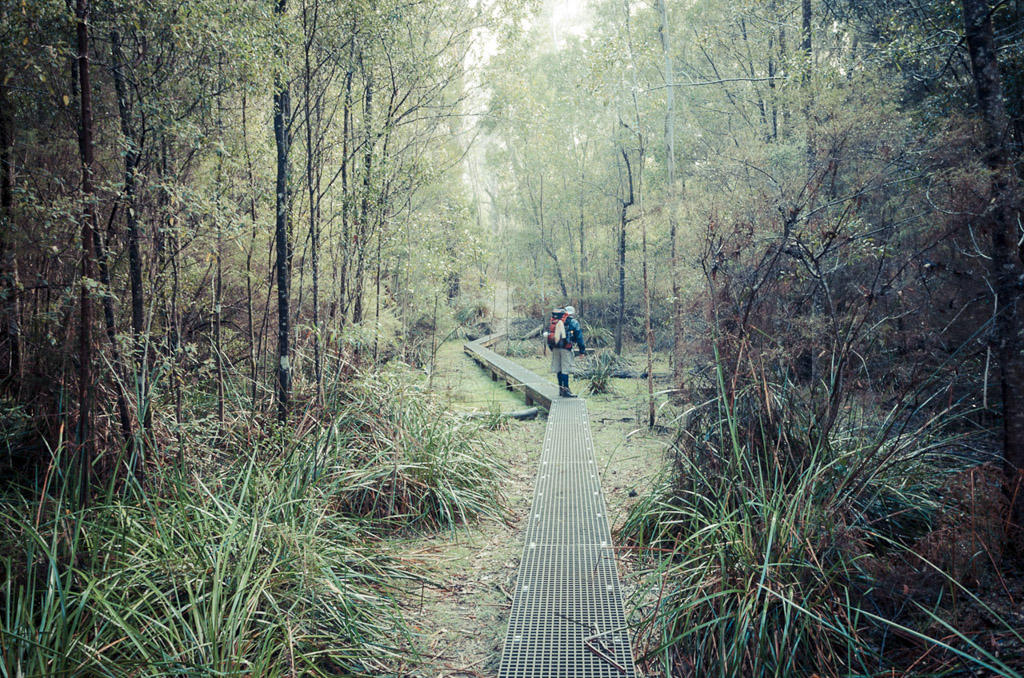 Can we just get this post over with, as quickly and painlessly as possible? The third day of the first tilt at the Great South West Walk is a hard one to write up for a number of reasons. Let’s have a paragraph to sum it all up.

Leeches. You must be sick of hearing about them in regards to this hike. Well, what can they say. In this leg from Fitzroy Camp to Moleside Camp, the area leading out from Fitzroy was absolutely crawling in them. This resulted in quite fast walking with no regard to taking photos. What could I take photos of anyway? This was the third day in the Cobboboonee Forest and frankly I was a little over it and keen to reach the Glenelg River for a change of landscape.

Oh yeah, the weather was the same as all the others so far. No wind, but constant drizzle, with an overcast sky that was overblown white, which made photography a grind. So, here we go, but I’ll warn first, there’s not a lot to write about, other than one of my shoes exploding, which resulted in a bizarre footwear solution. 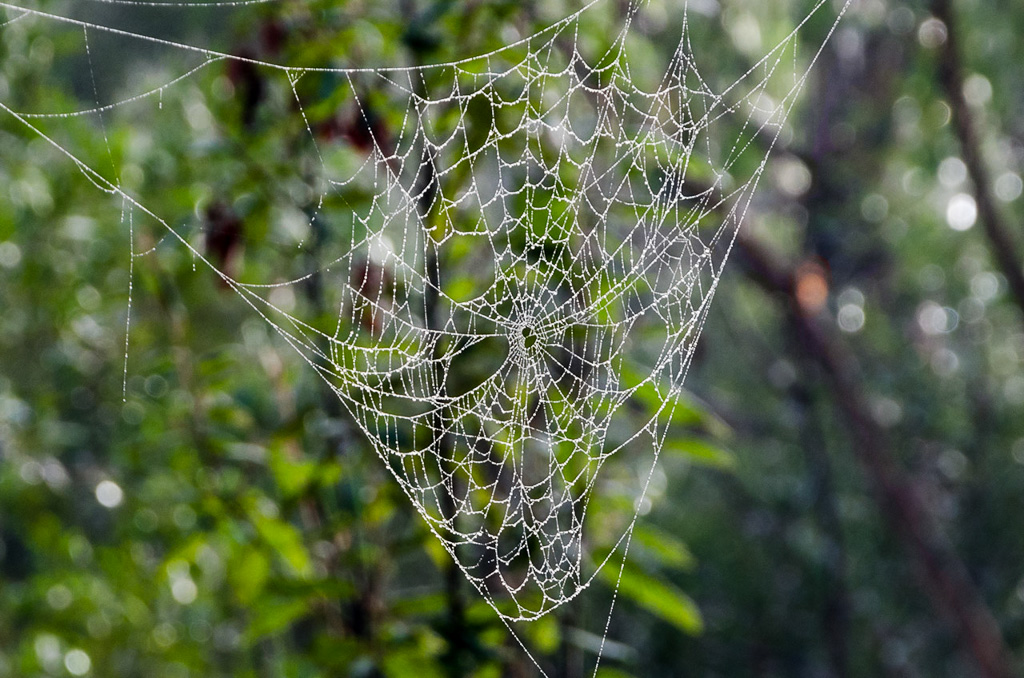 Fitzroy Camp was a damp, bleak affair deep in the forest. I’ve no doubt in the warmer months it would have a bit more going for it, but I was keen to move on. Oh yeah, it also had a fearsome man-trap installed. There’s a tree stump about six inches high, right next to the shelter, which in the dark I constantly tripped over.

Mind you, after the first potential face-plant I’d still trip on it, even when I knew it was there. Anyway, I did have my new favourite blister friends from the previous day to contend with, so I went for a complete mummy approach of extensive taping to keep them under control.

We headed off with pants tucked into our socks, as an early warning device for leech spotting. This sort of worked, but not in the fashion stakes. Actually, we distinctly looked like wankers, but hey, this is hiking, not Milan right? That white sky was killing the pictures, so I went for the odd close up when I could stop for long enough without being leech molested. 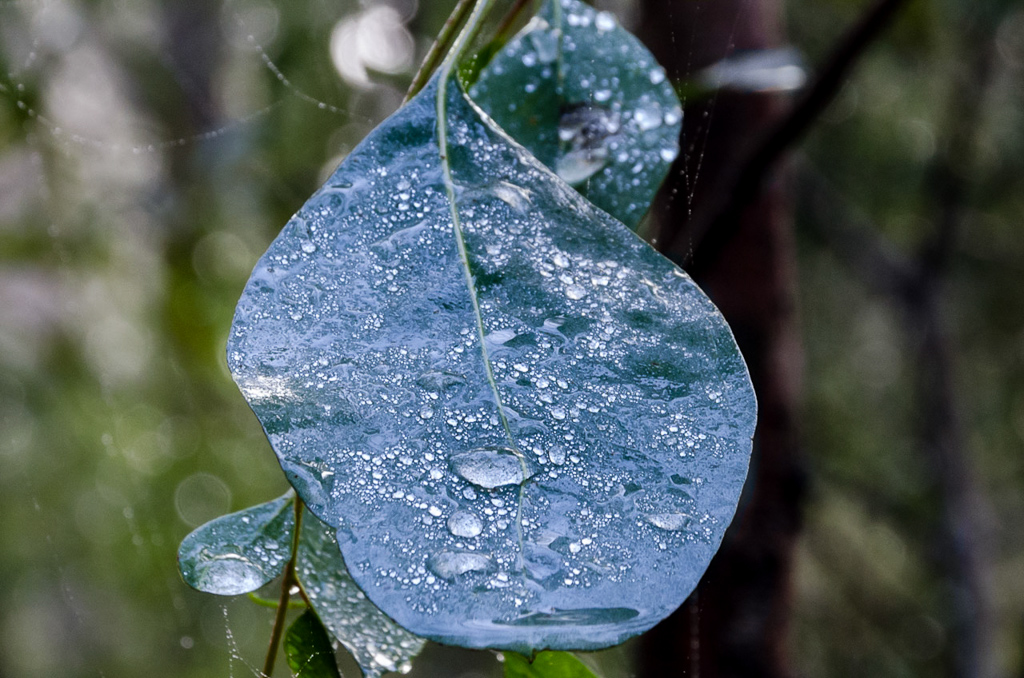 Do you remember all of that business I wrote in the last post about the traditional ‘hiking fiasco photo’? You know, the one with a branch with water droplets on it? Well, this day was no different and with constant drizzle it was always going to happen again. I really need to get some new style of photo. 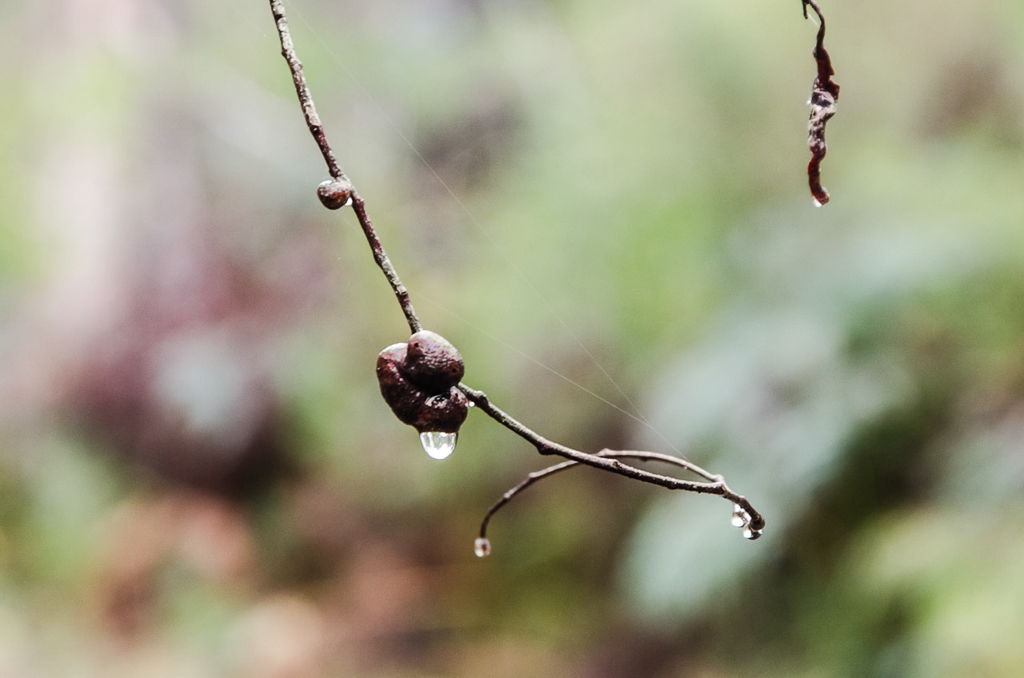 How about another one? 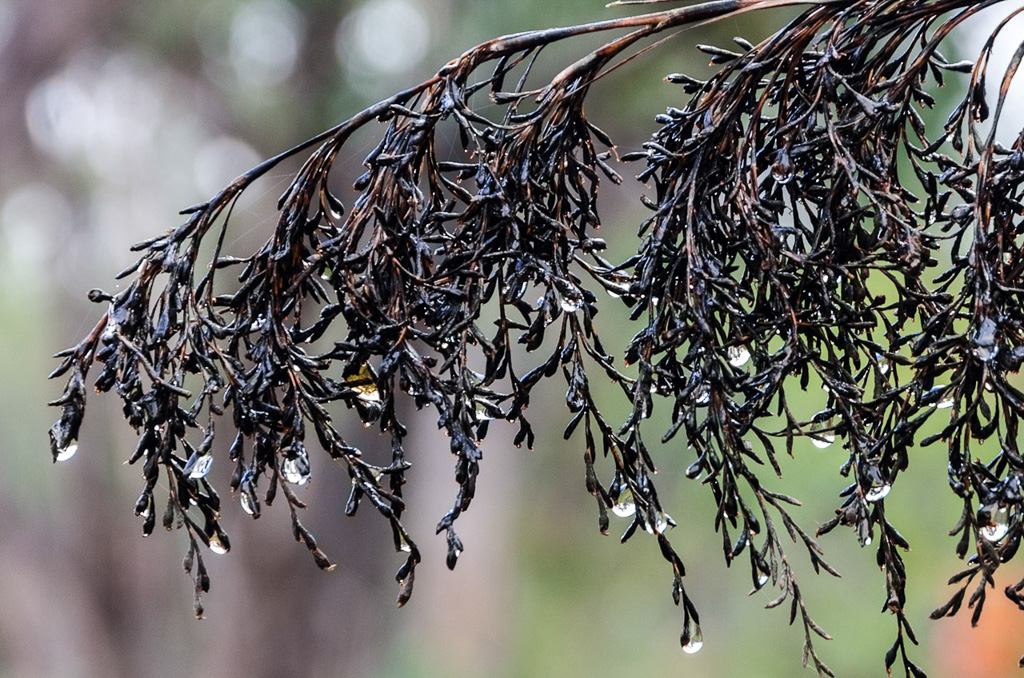 Ah, the old favourites. Anyway, things were going fine I guess until the official ‘2012 Shoe Detonation Incident’ occurred (I wonder if I can create a Wikipedia page on that?).

There I was gingerly strolling along, enjoying the constant rub of pain from the blisters when I felt one of my shoes become loose. I assumed a lace was becoming undone, so I bent down to re-tie it, but lo-and-behold it was already tied up tightly. Huh? Oh yes, what I found was a shoe failure, which is rated at about 4.2 on the ‘what a balls up’ scale.

The Keen Siskiyou shoe I was wearing has a strap system that wraps all around the shoe and is connected to the laces. You tighten the laces and these straps constrict keeping everything snug. That’s great until one of those whiz-bang straps breaks for someone unknown reason. The strap at the heel had broken, which meant the entire shoe lace system had lost tension. I now effectively had a hiking slipper. In fact if I wanted a slipper I’d rather my ankle ugg boots, as at least they’re warm. Here’s the rear of the shoe with the broken strap. 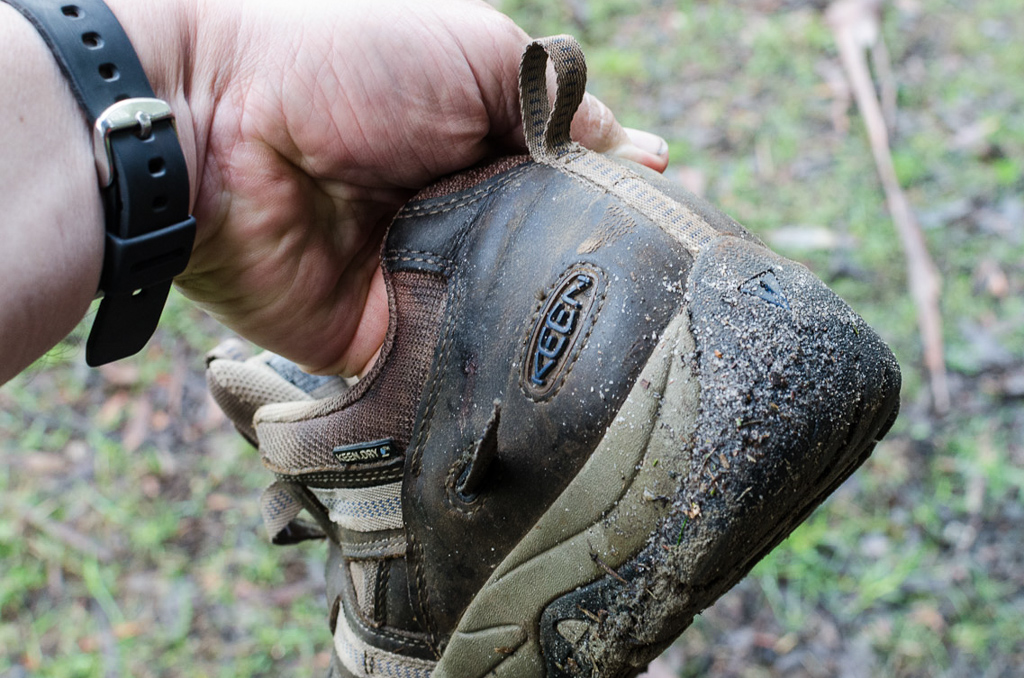 What’s next to the Keen logo? It’s the strap, which is meant to go across the back of the shoe.

What a bummer. I reckon I uttered “No!” more times than Tony Abbott (and that’s saying something) before continuing on with my loose slipper.

It was difficult to conjure up some better options, as there was now some extra pain clouding my thinking. The now loose shoe was rubbing the blisters at a fearful rate.

Meanwhile during all of this saga, the Smuffin had vanished up the track. He was chugging along and so far ahead of me that he decided to build a few things due to boredom. This brings me to the ‘stick’.

Yes, he grabbed some token branch and whilst walking whittled it back with a knife until it was silky smooth. It was ‘construction on the go’ and it became pretty handy for walking. I’m not sure about the staged ‘man on the move’ photo, but here it is in action and this post is well and truly overdue for an acronym. 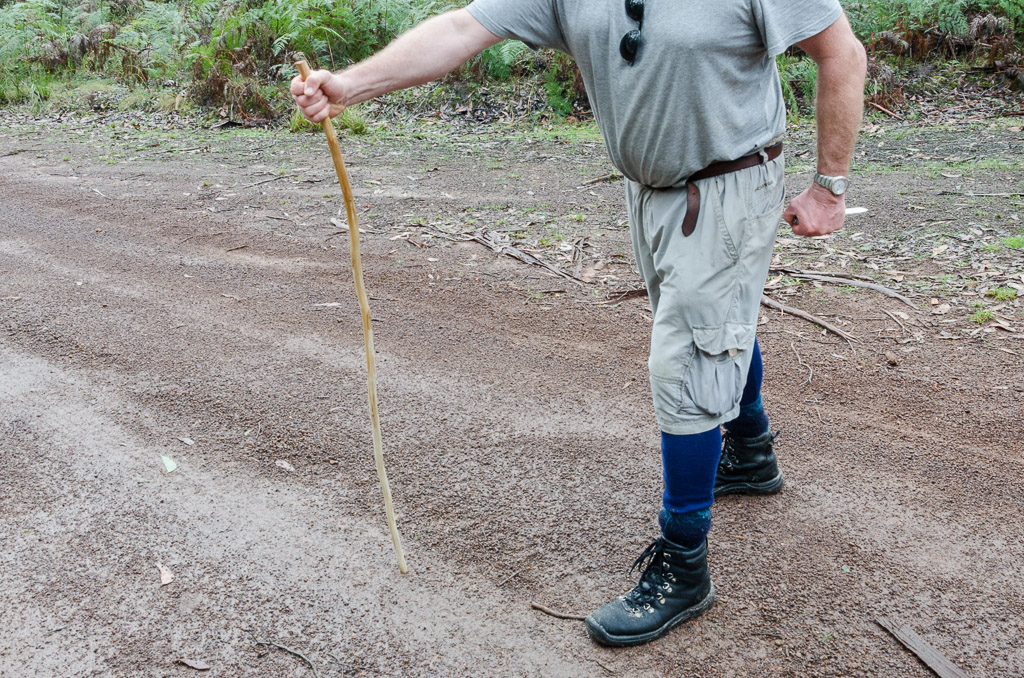 Smuffin made a stick. Hurrah! (SMASH)

Man, that’s one of my better ones and nothing beats the buzz of a random ‘Hurrah!’. Anyway, on we strolled, but you may have wondered where we’re standing in the photo above? Well, there’s a handful of dirt roads we crossed during the day and they became our oasis away from the leeches who owned the forest. In fact, we’d plan our stops to have a snack by the roads coming up on the map. Oh yeah, those leeches really were that bad.

Onwards we walked, passing a large waterhole which was full of jet black water. It actually looked like an ink-pot which is a surprising guess, as it does have a name and it’s called… 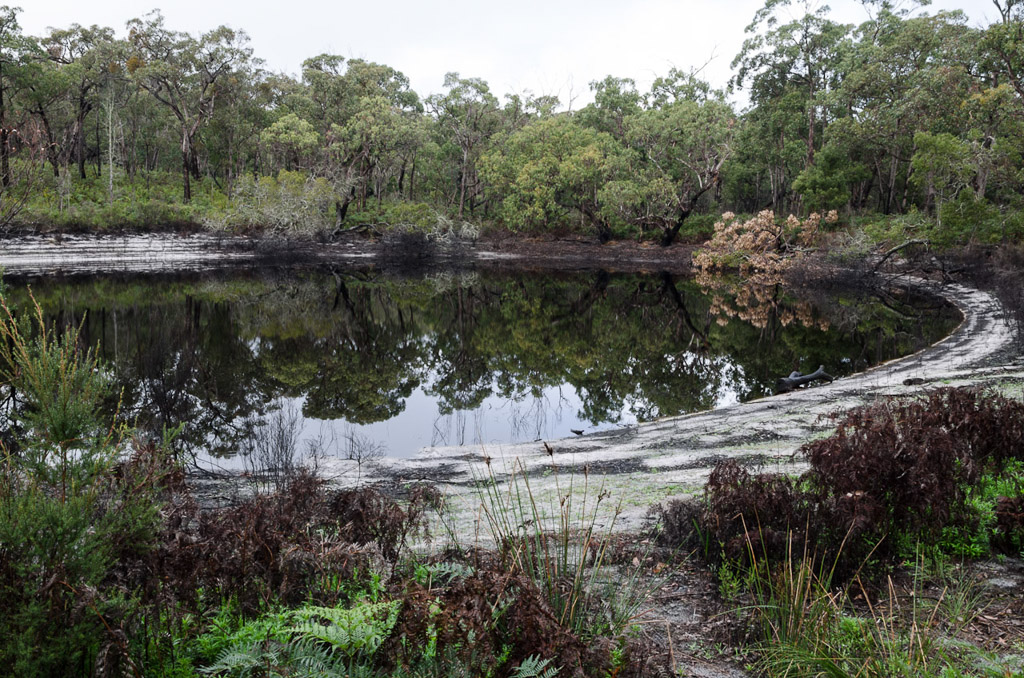 I’ve kept this post quite short, as we’re close to the end of the day, but I really want to get this entry over with so I can finally reach the Glenelg River. Just outside the Moleside Camp we crossed our first tarmac road since we’d started… 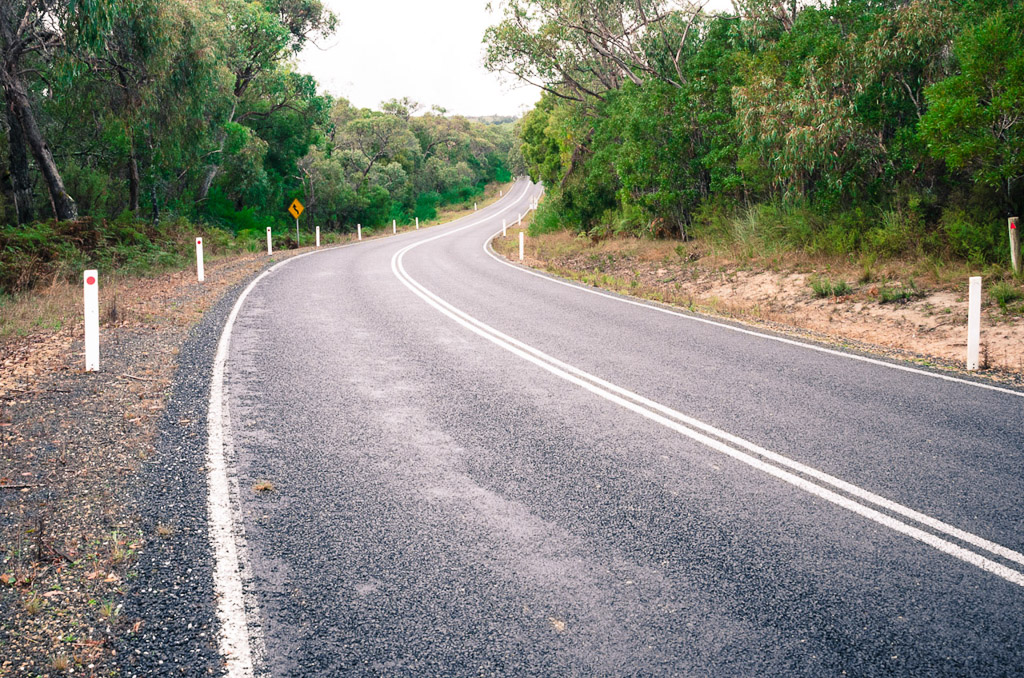 …and then we were at both the camp and the river. Moleside (weird name and I’ve no idea where it comes from) is a great little spot elevated above the Glenelg River, which always seemed to have a mirror calmness about it. 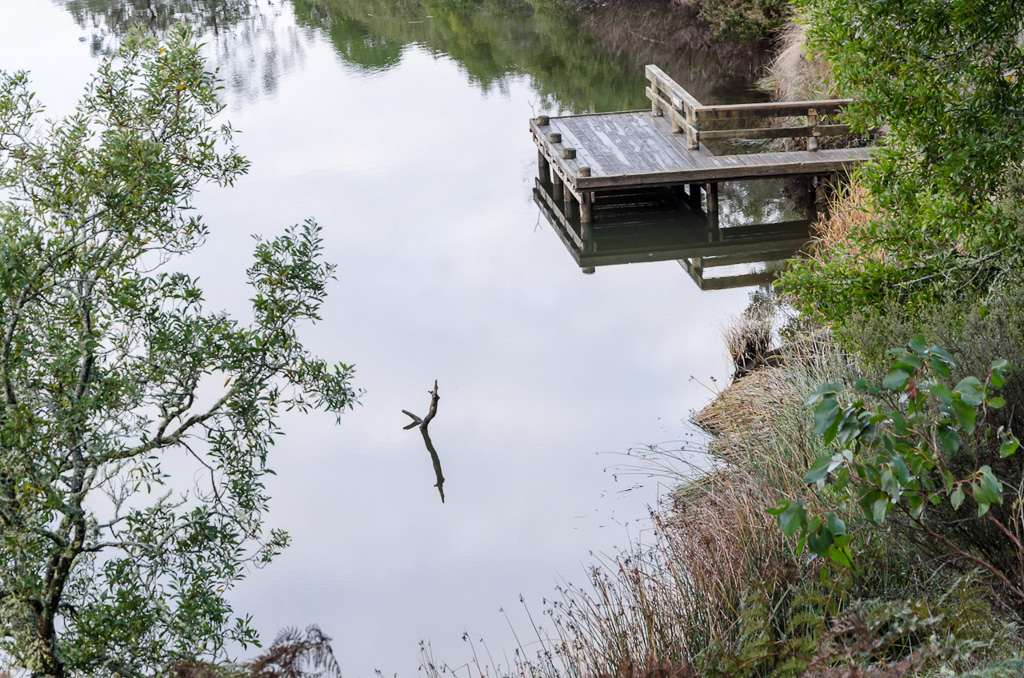 Now, there was the big problem. What was I going to do with my shoe situation? That Keen slipper was toast, but I only had a couple of options. Remember at the start of the day I’d wrapped my blisters up with a few acres of tape? Well, somehow that didn’t help and the blisters were worse than the morning. This went against everything I’ve experienced in walking before and I became convinced Keen’s were Satan’s shoes.

The trouble is, I didn’t have the largest range of options. All I had to replace them with were a pair of sandals and another low-cut hiking shoe that were sitting in my car in Portland. The blisters were rubbing to an annoying degree and I could barely walk, so I went for something radical. Maybe the sandals wouldn’t rub as much? They could work for a few days until hopefully the feet healed a little bit? With all the leeches around though, I’d have to slip into East European mode and walk with not just the sandals, but socks as well.

So, by utilising Lady Smuffin, she delivered not just dinner, but a pair of sandals and socks. Ah yes, but these weren’t normal socks. We’d found our ‘pants tucked into socks’ method was okay for early leech spotting, but the dark socks made it just that little bit harder to spot them. So, the idea was hatched for an early warning system of beaming white socks. It was a stroke of genius and now we were well and truly ready for the catwalks of Milan. 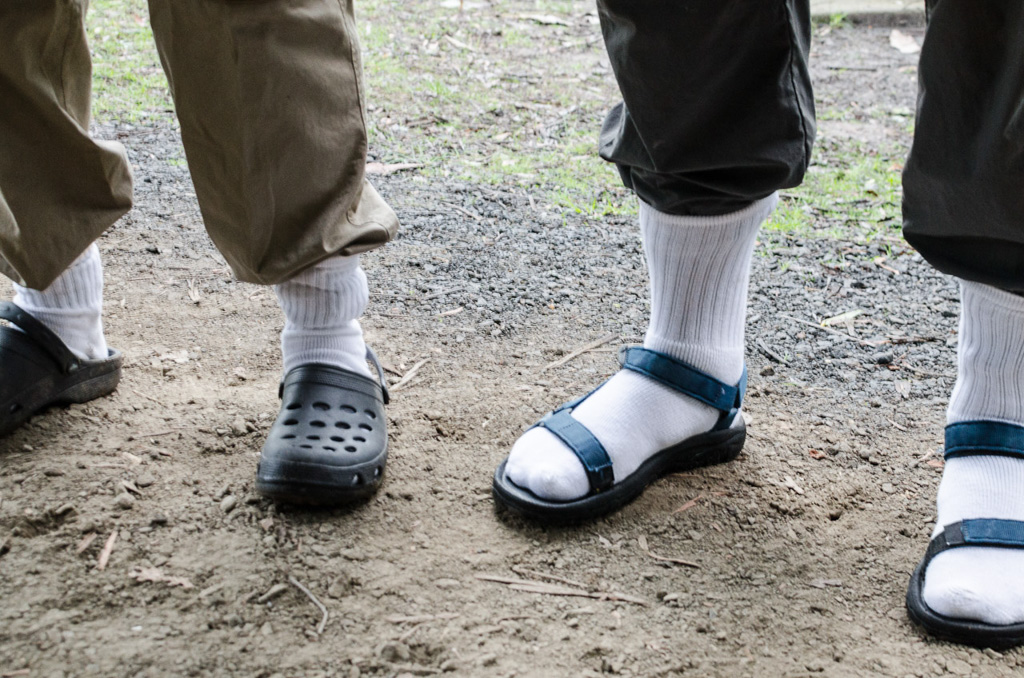 Now that’s what I’m talking about.

We were heading into a whole new dimension of ‘hikers looking like wankers’ look, but it was the last resort. At least the ‘forest walking’ was over and now for the next few days we’d be following the Glenelg River. That’s what I was looking forward to and really, what more can one say, other than, ‘Hurrah!’ 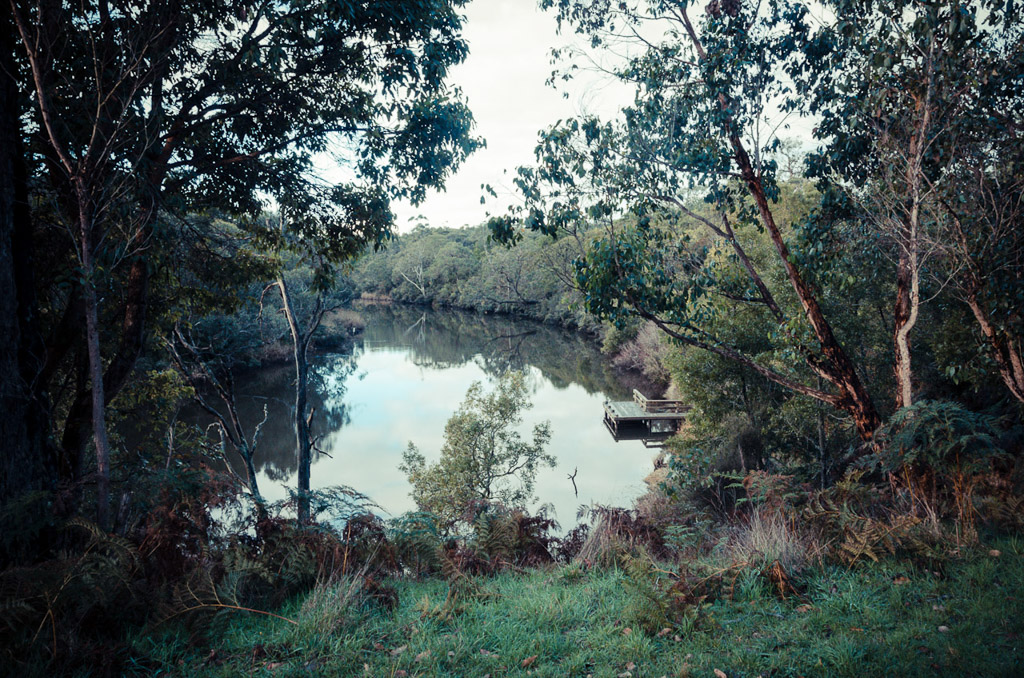