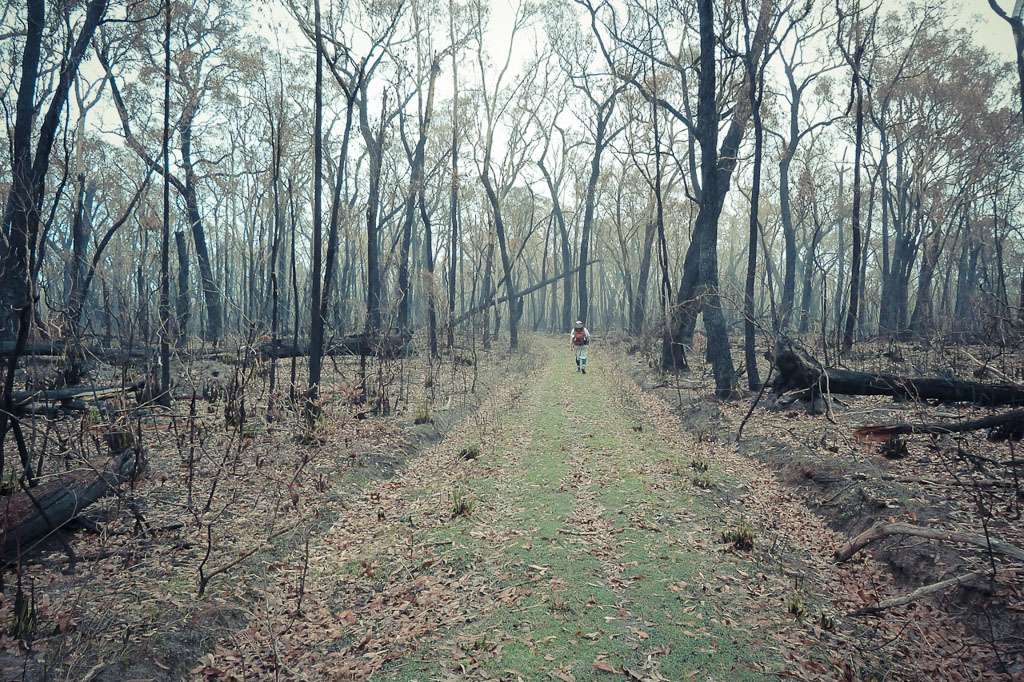 I guess I’ve neglected writing up the definitive fiasco account of the 250 km Great South West Walk, haven’t I? There have been few reasons for this, and I guess I should outline them in case you’ve been lying in a coma for the last few months and missed out what’s been going on.

Did you see what I’ve just done? The first three sentences in this post were questions. How good is that? In fact, I did another one then just, to keep you on your toes. The first world problem I’ve had in writing up this trip, is it was two hikes in one. Huh? Don’t forget I initially set out with Smuffin and after about 90 km abandoned due to all sorts of reasons with the main one being my feet were stuffed. As a result, I came to the conclusion that having feet in good shape is an important aspect of hiking. Did you know that?

So, the first hike was abandoned, but I was so annoyed I returned one week later and started the whole walk again, sans Smuffin on the early part which we’d done before. He then linked up with me at the half-way point and we finally finished it.

Now, other than a couple of overviews I’ve only written about one full day of the two hikes. The thing is, if I write up each day there’ll be at least 15 entries. Surely only an idiot would write up each individual day, one after the other until it’s done, and in the process boring everyone to death with the story of our GSWW? Mm… That’s a problem, but I’ve come up with a solution. What I’m going to do is write up each individual day until the hike is done. How’s that for an alternative?

So, on our first attempt we’d walked from Cubbys Camp to Cut Out Camp, which was a straightforward day until we were violated by more leeches than I’d ever seen (other than the Federal Liberal Party). Due to the leech drama we were always going to be more attentive to the numerous blood suckers, so for the next couple of days the pictures suffered, in that I hardly took any. This is definitely in your favour though, as it means this entry won’t be as biblically long as my previous post.

The second day from Cut Out Camp to Fitzroy Camp was a reasonably long affair and the theme at all times was ‘forest walking’. Mind you, it’s easy walking as the whole place at this stage is flat, so it should be straightforward. Shouldn’t it? Well, yes, but there’s always a problem with me, even on the easiest days of hiking.

Okay, here we go. We set out strolling through the Cobboboonee Forest with eyes on our ankles at most times as the leeches were well and truly out and about early. In fact, there were millions of them. I’m not joking when I say that at times we’d stop on the track and we’d see dozens moving on the ground around us.

You know what this means? It meant we barely stopped at all and there wasn’t going to be a relaxing lunch on the side of the track like the previous day. I was wearing my Keen Siskiyou shoes without gaiters and the attack to the ankles was on from the get-go.

I already had the itchiest leech bite known to mankind and wasn’t keen on any more, so I was being very diligent, by adopting the early warning system of walking with my chin resting on my chest. Actually, literally stopping for seconds to take a picture would require another 30 seconds to de-leech and I became adept with my knife out at all times to flick them off my legs, such as this one here. 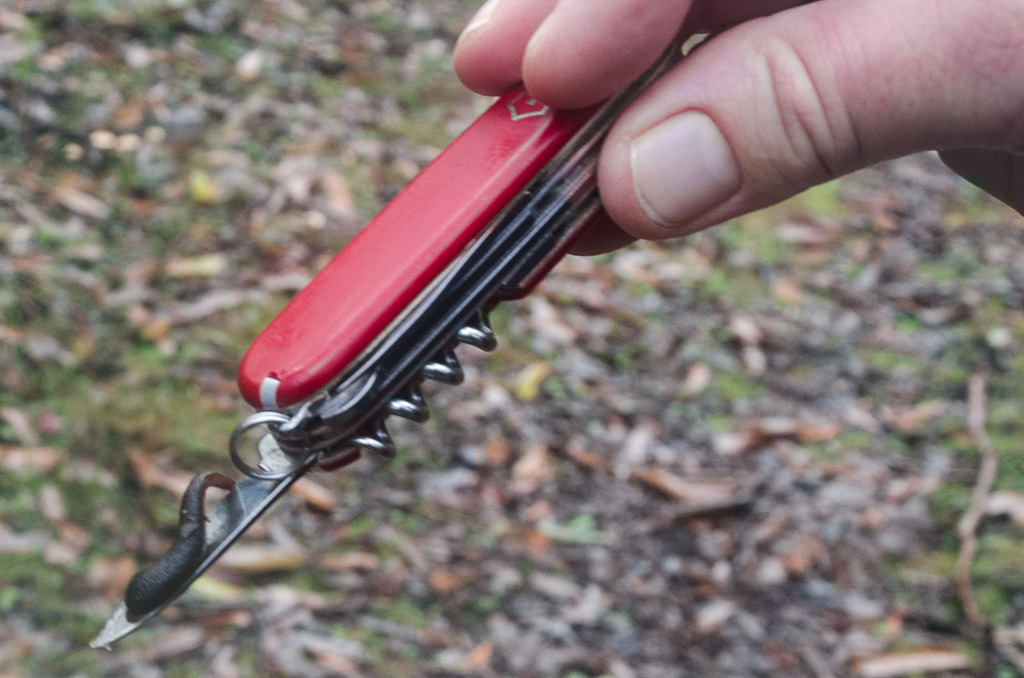 Leech on a knife

Talk about a frustrating day, but we made do, by making good time walking through the deserted forest, passing the odd car wreck on the way. Car wreck? 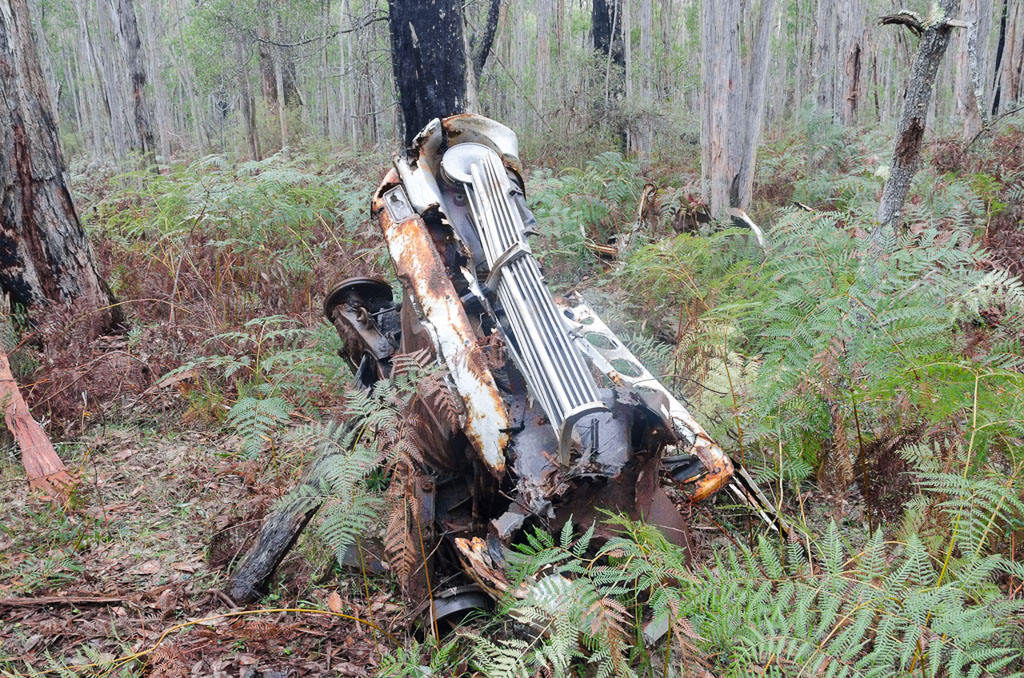 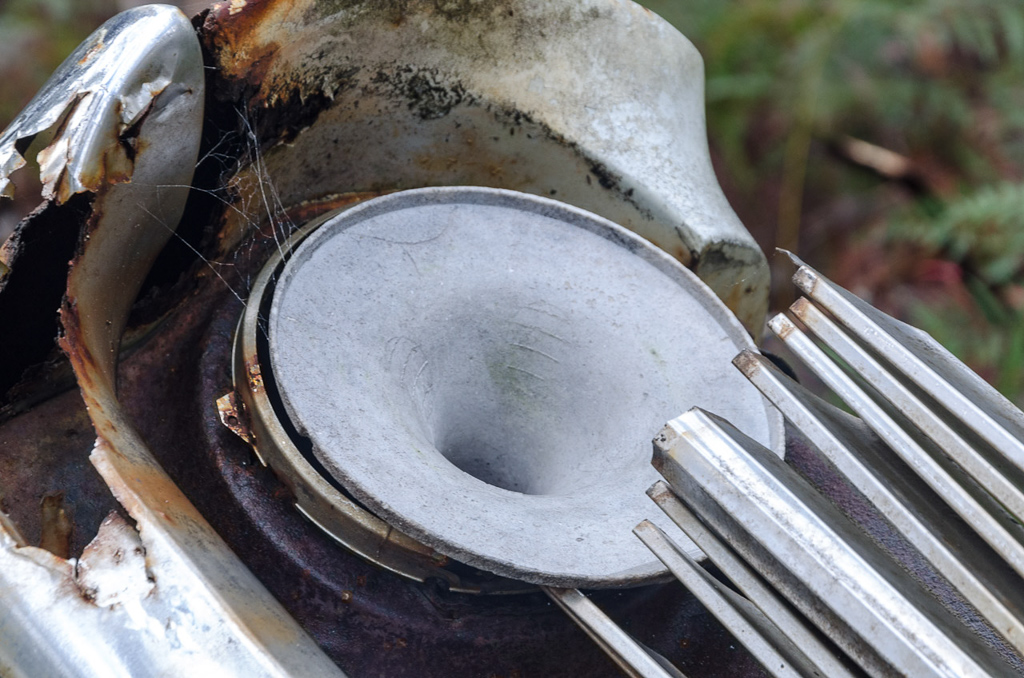 The car was beyond repair, but that wasn’t the only thing damaged. Somehow Smuffin broke his aviators and he now had a great ‘sun-monocle’. 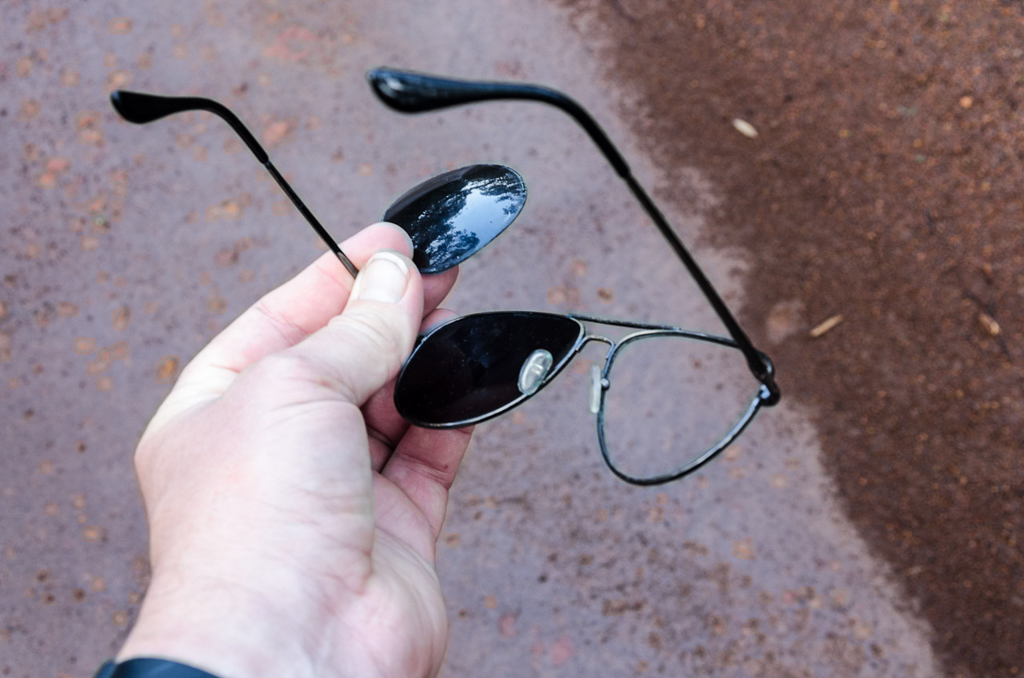 Don’t forget the entire area is ‘fungi central’. They add some colour to a rather bleak forest and there were plenty to keep us entertained. 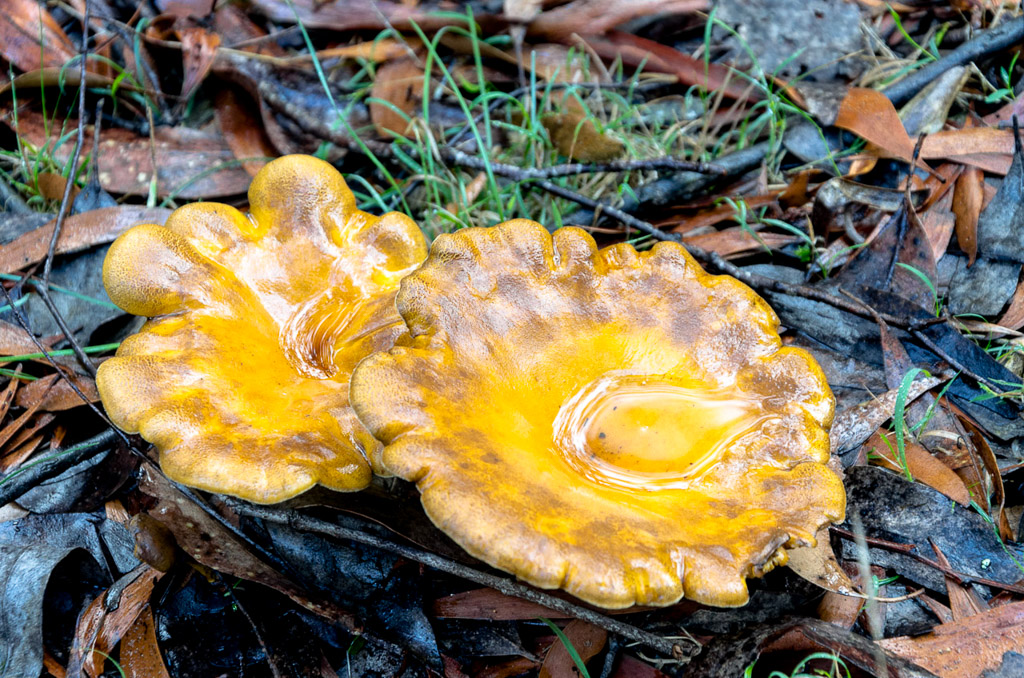 We reached a part of the forest that had been burned in a controlled fire. It looks a little eerie in the pictures, but I found it quite interesting, as this was the first and only time the sun came out for the day and there seemed to be less leeches than anywhere else. 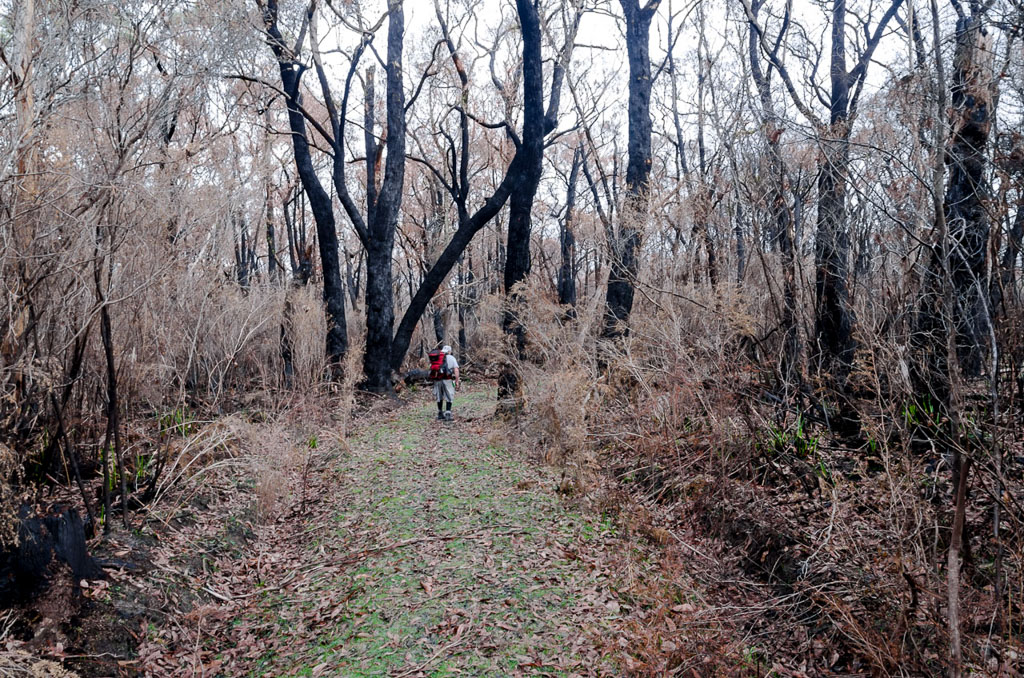 Although the huge trees around us were blackened by fire… 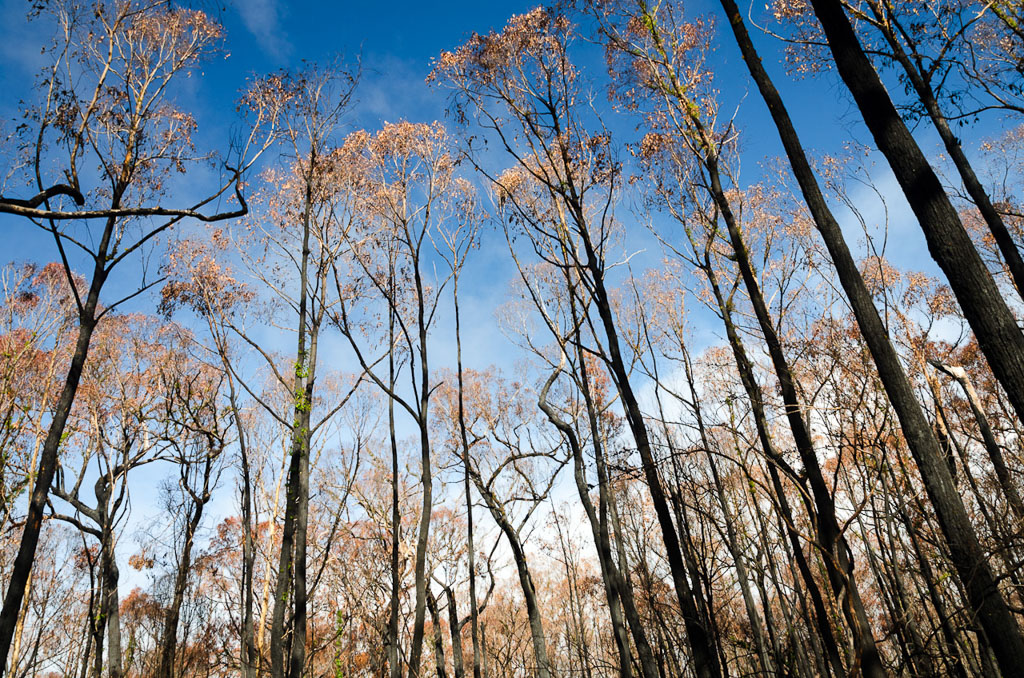 …there were already plenty of signs of regrowth. 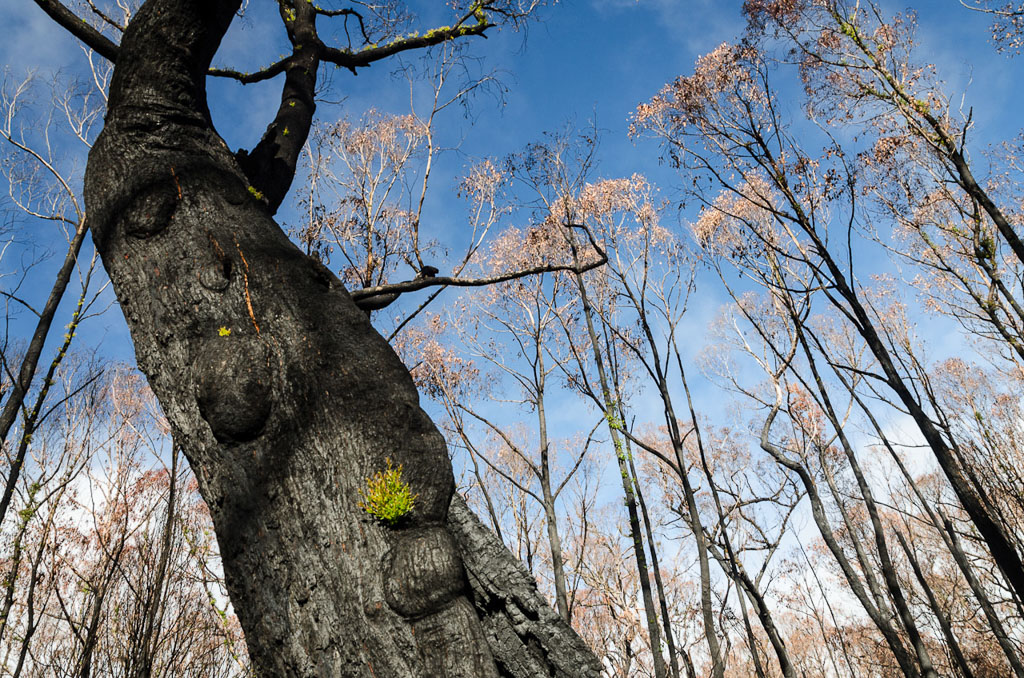 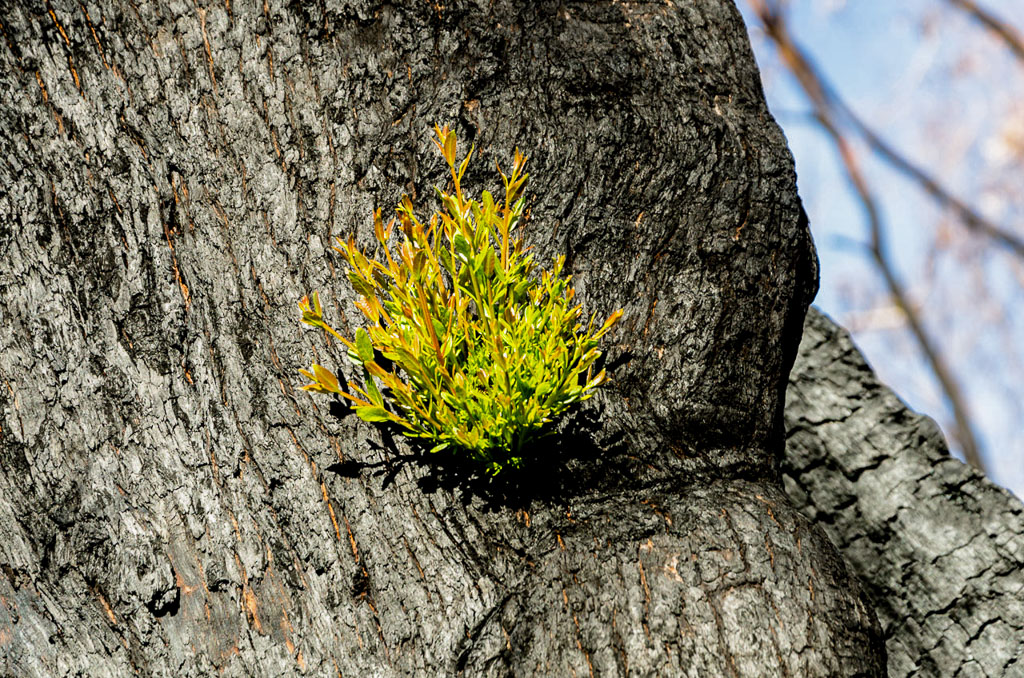 Another favourite of mine is the odd puddle of water due to the reflections they provide. The next photo is a ‘staple fiasco shot’ which I seem to have from just about every hike I ever do. 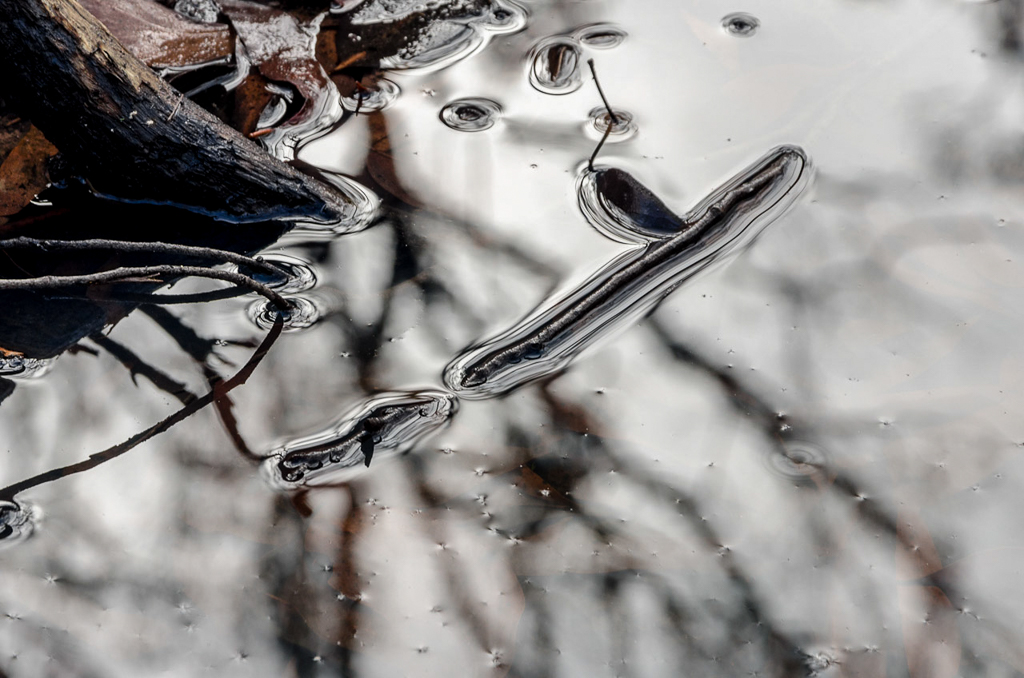 We continued on along through this burnt out section… 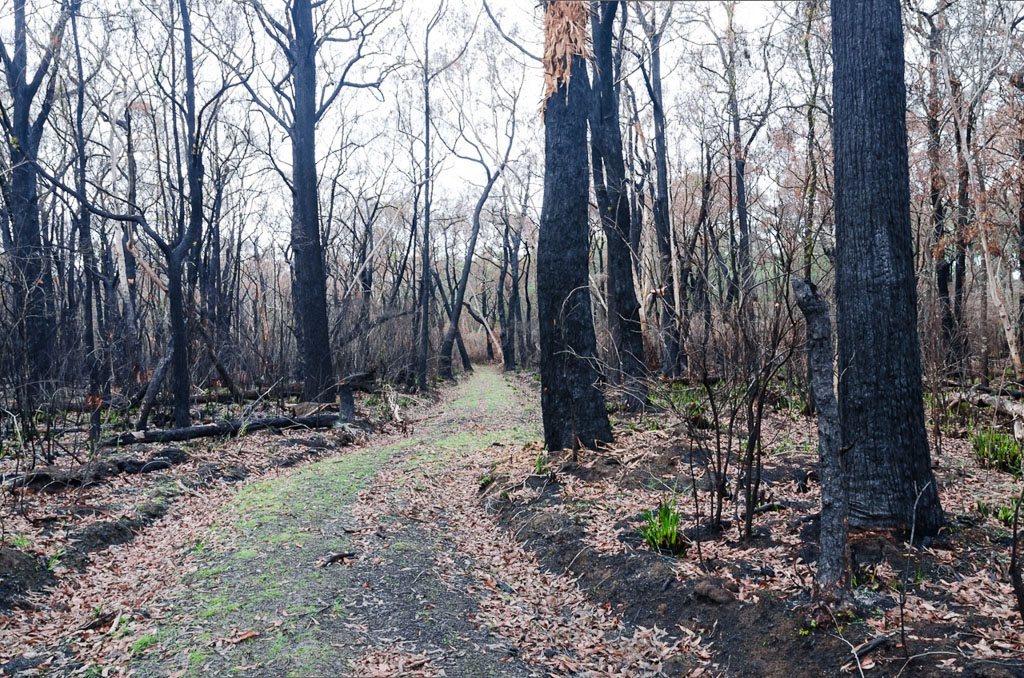 …and I want you to make note of the size of the path we were on and I’ll come back to the reason later. 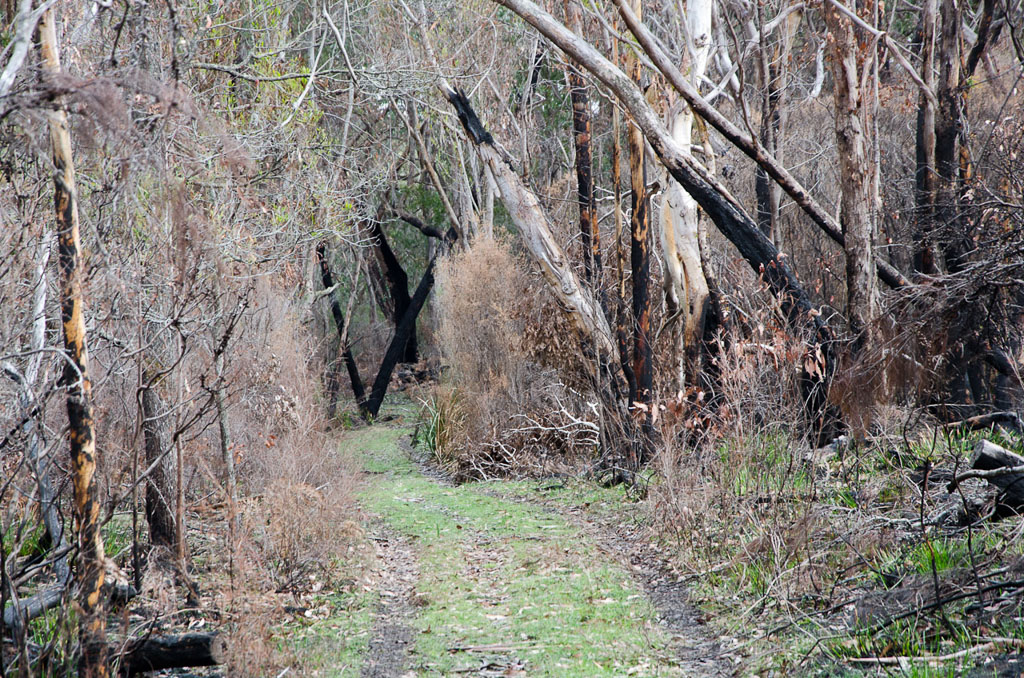 We strolled on, de-leeching as we went whilst leaving the burned areas behind and entered an area of heathlands. How did I know this? Well, there was a sign of course. 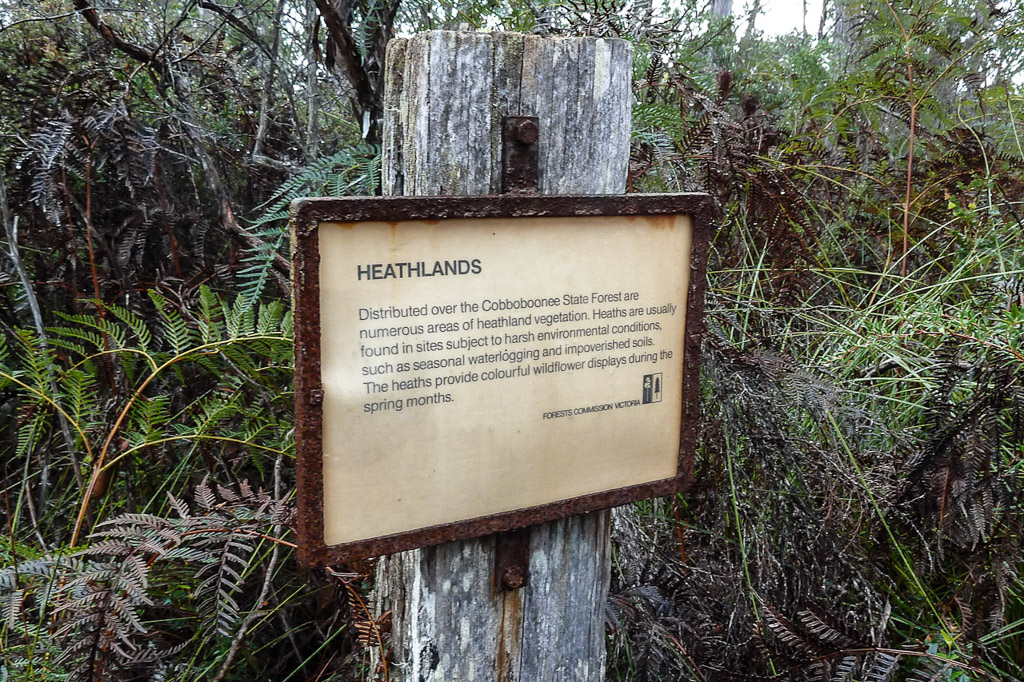 It was around this time rain hit us a bit heavier than the standard drizzle we’d put up with for most of the day. It just happened to be in a section where the track was very grassy and my hike began to go pear-shaped. Wearing a low cut shoe without a gaiter meant my feet were getting really wet, and with soaked socks I noticed a bit of rubbing on my heel. I didn’t think it was too bad at first, so I continued on. 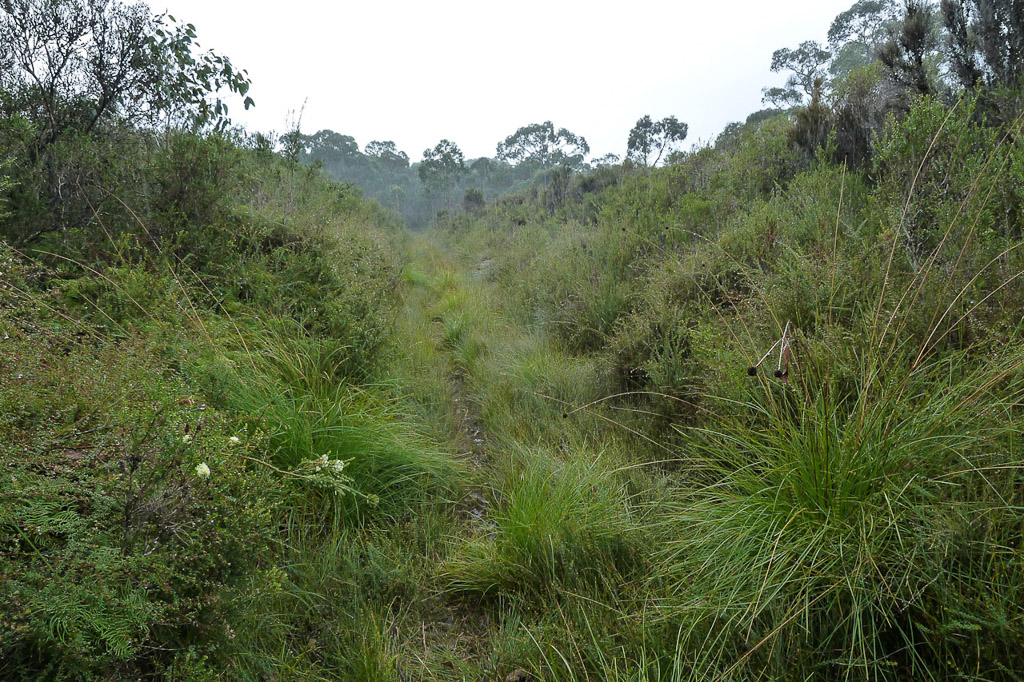 This was an opportunity for my second ‘standard fiasco photo’ which is water droplets on tree branches. If it’s rained on a hike anywhere, I’ll have a picture exactly like this one. 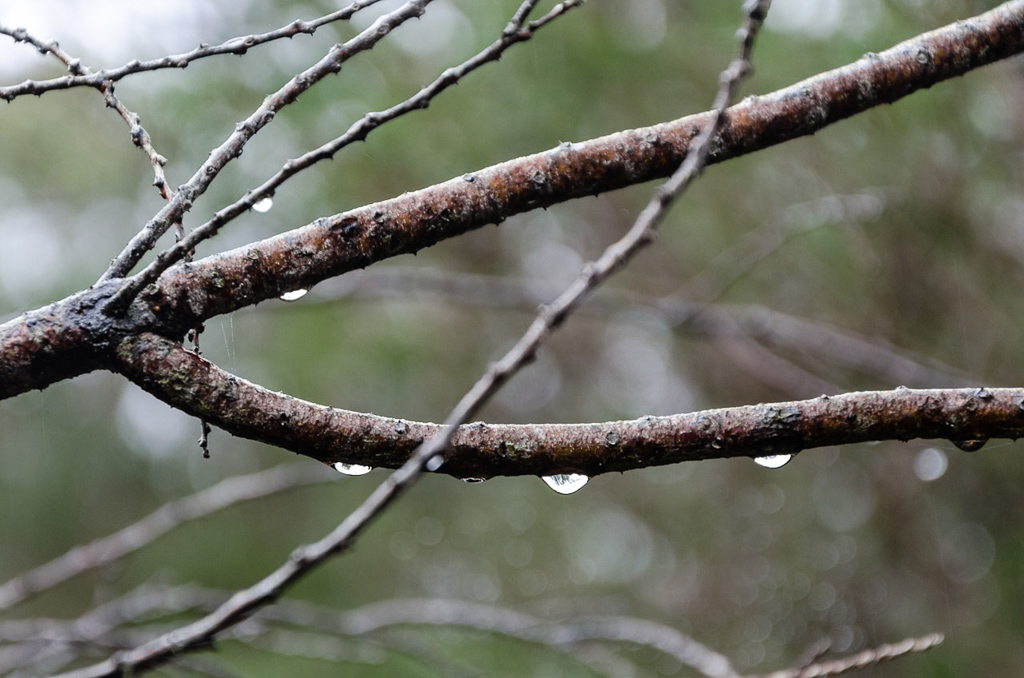 We did have a good spot at Cobboboonee Camp for lunch. It’s three sided shelter was a perfect place to eat away from the rain. I’d show you photo of it, but due to the bleakness of the day all of the pictures are slightly out of focus. Oh well, don’t forget I came through the same spot again just over a week later, so I’ll show it to you then. All of these shelters have an intentions book and I always find the write-ups entertaining. I mean, check these two out. 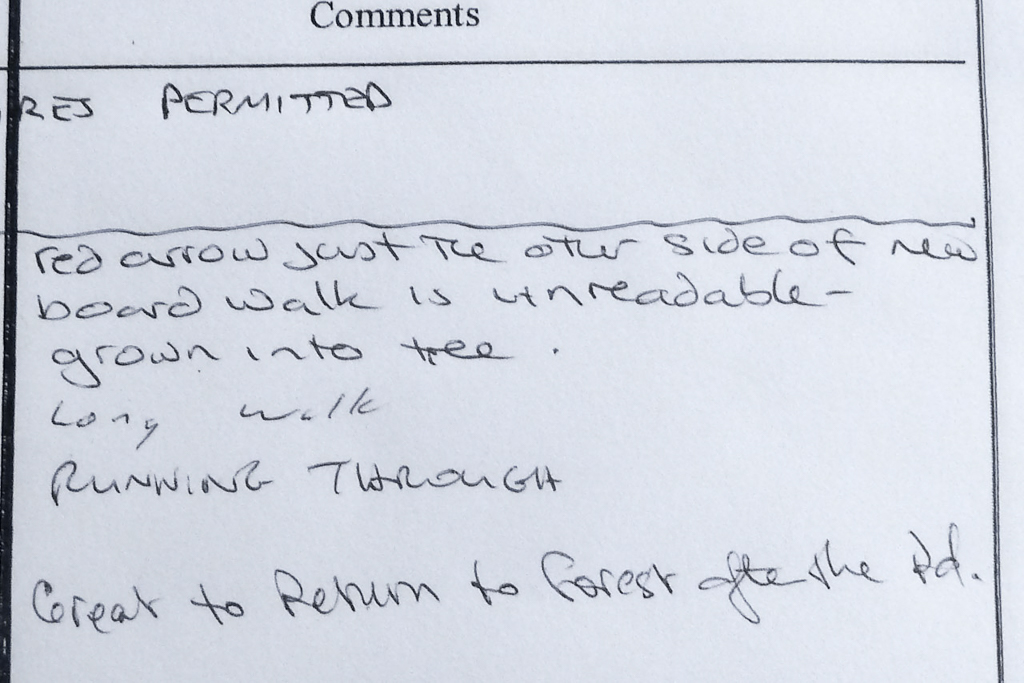 I wasn’t sure if the bloke in the first comment was taking the piss. ‘Red arrow…unreadable…grown into tree’. Now, remember earlier I wanted you to take a look at the path we were on? I hope you noticed its size.

The GSWW really has to be one of the most well marked and signposted hikes I’ve ever been on. There are triangles everywhere and this bloke is complaining about one that’s grown into a tree? I can confidently say that if someone gets lost on this walk, then besides being rescued, they should be assaulted for incompetence as well. Really, some people are never happy.

Oh yeah, it doesn’t end there. Check out the bottom line which is also a little bizarre, ‘Great to return to forest after the Rd’. Yes, there is a road section before the Cobboboonee Camp, but do you know how long it is? It’s exactly 150 metres. Man, these blokes want it all. Please tell me they were on a road somewhere else and not following the actual track notes? 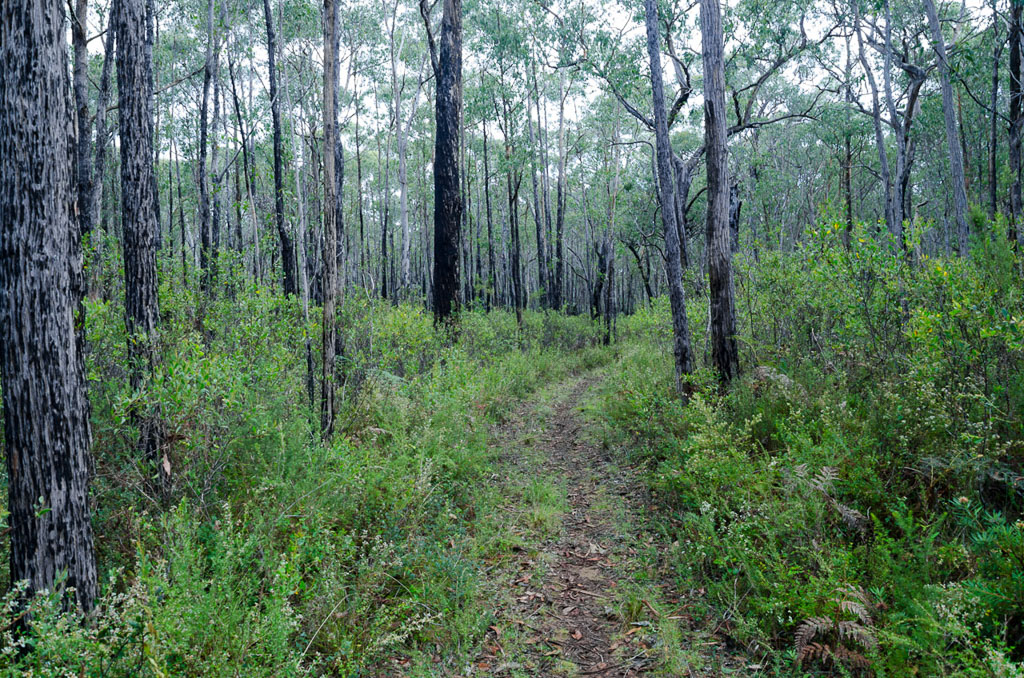 …before reaching Fitzroy Camp which is buried in the forest and is a pretty bleak affair in winter. My feet were hurting a bit and when I took my shoes off I had a bit of dread. For good reason, as I now had matching blisters on the outside of both feet. Here’s what they look like and I’ll reduce the image size, as I don’t want you to be vomiting from seeing a blister the size of a pumpkin appear on your screen. It’s bad enough for me on my 27 inch monitor and it’s my foot. 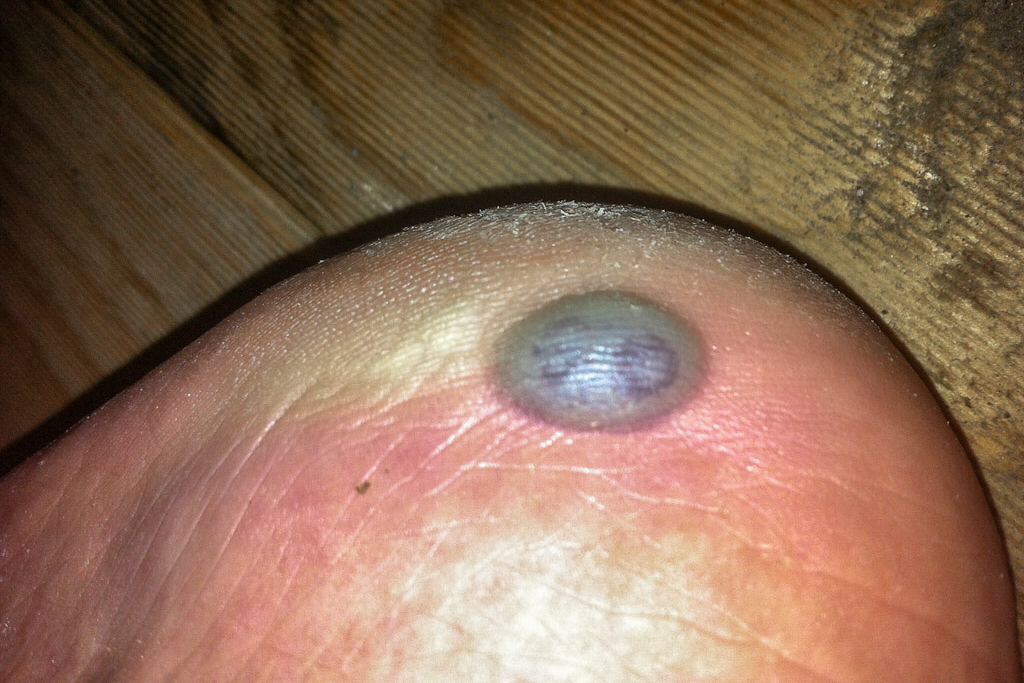 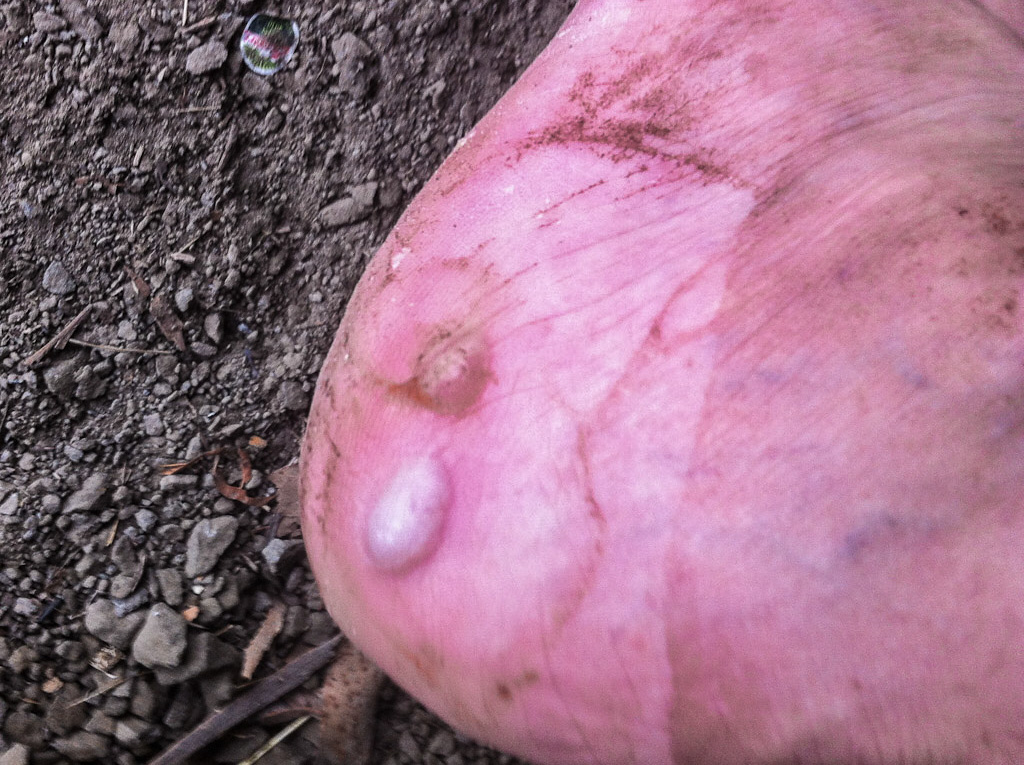 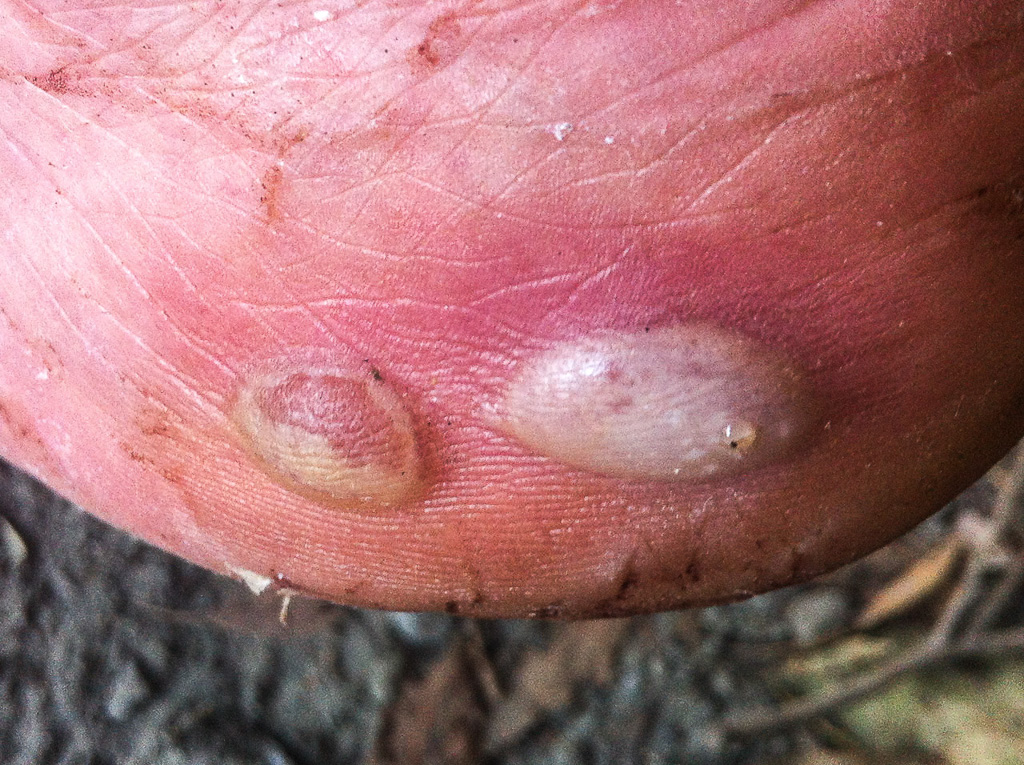 This was the start of the ‘Great South West Walk downfall’ and initially I was a little perplexed. The shoes I was wearing had been worn a lot before the hike, including a few 20+ km day walks and there was no hint of any blister problems. I can say though, in those previous walks, my feet never got wet from a day of constant rain. This time, my socks were soaked and there lies my shoe dilemma. With wet socks I can assume the reason for the rubbing, which I’ve never had with a lined boot? It was about this point I was dreaming of my ‘Milton the Monster’ full-leather, hiking boots.

So, that was the end of the day and there was the realisation I’d have to tape the bejesus out of my feet for the rest of the hike. I guess it was a fairly entertaining stroll with no more leech bites being a bonus. Oh yeah, just because one is finished walking for the day, don’t think the strange sights have finished. There’s always Smuffin on hand displaying his ‘neo-hiking attire’. 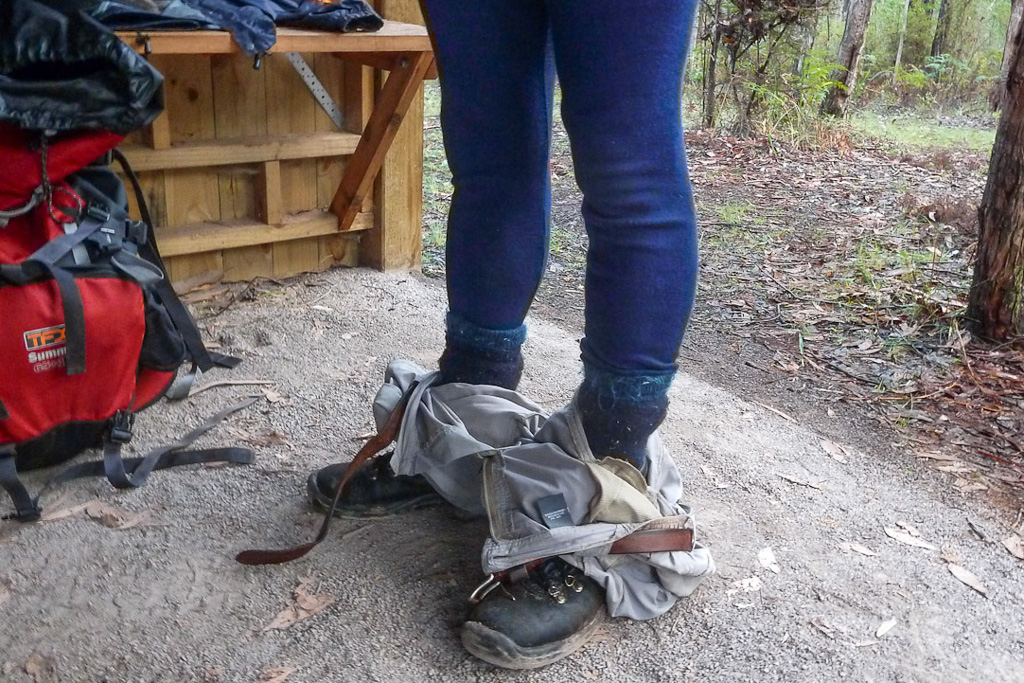