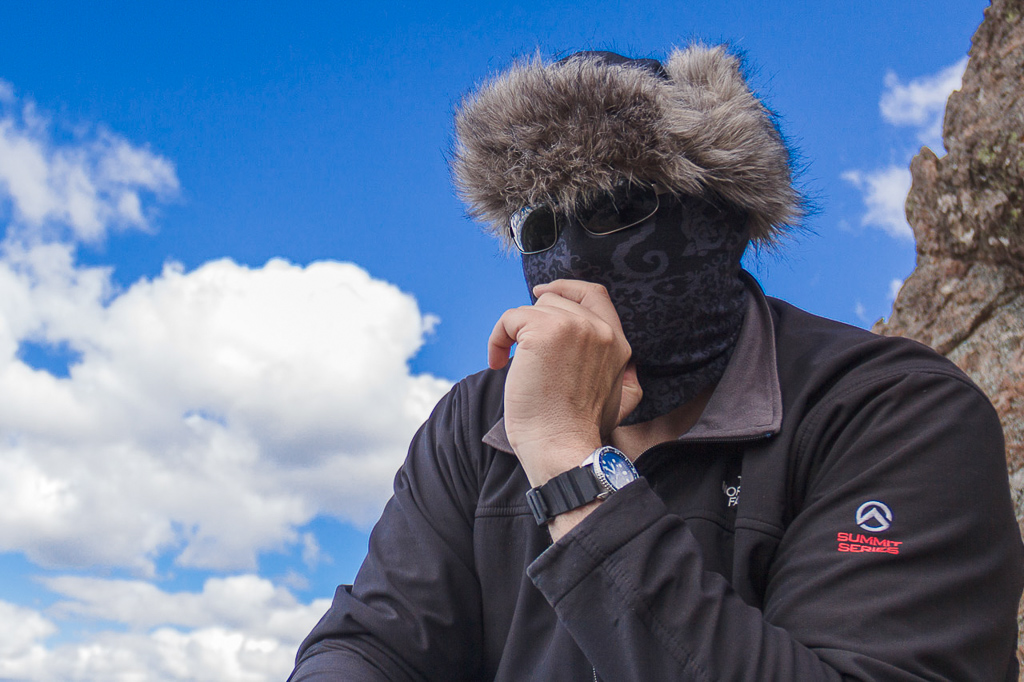 What’s going in the photo above? I’ll get to that in a minute and ignore the fact you’ve seen the picture in my Hanging Rock post before.

Do you realise that has taken me about three years to come up with my definitive headwear for hot weather hiking? I’m glad I worked it out just as summer ended. What is it? Well, this is pretty cutting edge stuff, but it’s a Buff worn under a wide brimmed hat. This is where the problem begins though.

Ignore the possum around my head, but do you see the buff across my face in the photo above? It’s made many an appearance on the blog, but there was a tragedy at the end of last year. Yep, I lost it.

Believe it or not, but on a Grampians hike I somehow lost it at a caravan park. Yeah, I know, it’s even stupider I didn’t lose it whilst hiking. I went all summer without my favourite buff, which is one of the signature items of this infernal blog.

Actually, I’ve had hundreds of people email me (actually, that’s none) and ask why I have my face covered. Well, you would as well, considering what I put up with on a daily basis. Here’s a photo of me at work. 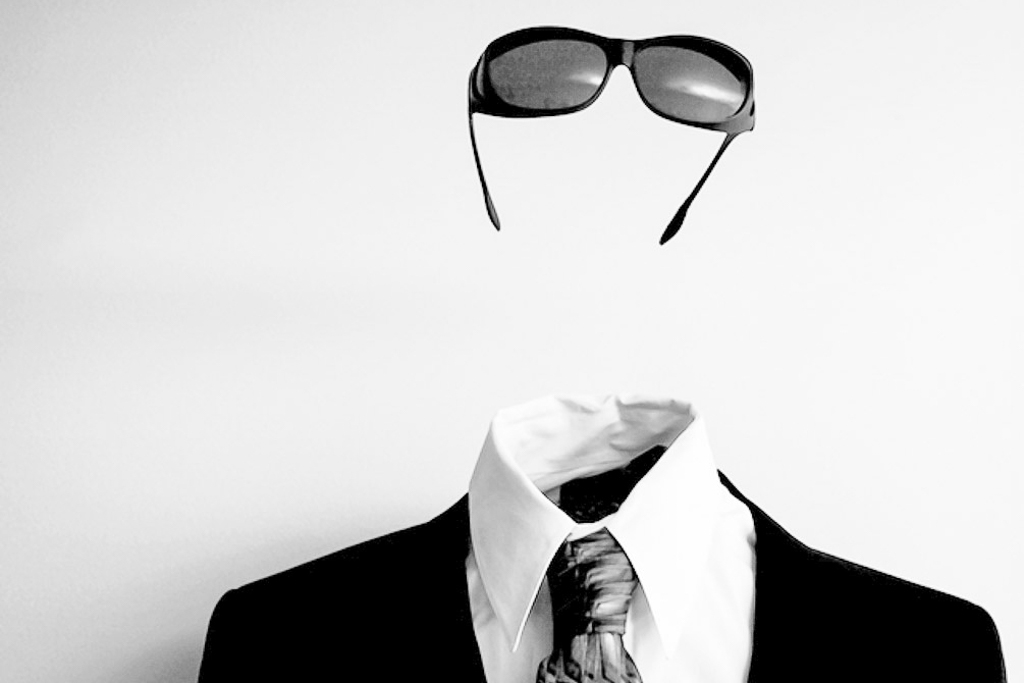 See the problem? I don’t actually have a head. You try and enjoy your dinner when you don’t have a mouth.

I guess everyone who has put on a hiking boot knows what a buff is, but for the more cruisy reader I’ll explain it for you. It’s a sort of rag looking thing that’s soft and you can wrap it around your head. How’s that for a technical explanation?

For me it’s essential equipment for soaking up sweat on my head, because without it I get something similar to a tap, flowing salty water into my eyes. It’s comfortable as well, which is essential, as the skin on my forehead is as soft as a piano players.

So, in the hope that I hadn’t lost it, I decided to go for an intense search. First of all I gave my car the once over and other than finding a cucumber that had turned yellow under the front seat (I wondered where that went) it wasn’t in there. Next up was the house and I really did turn the place upside down. In fact I went a little overboard. 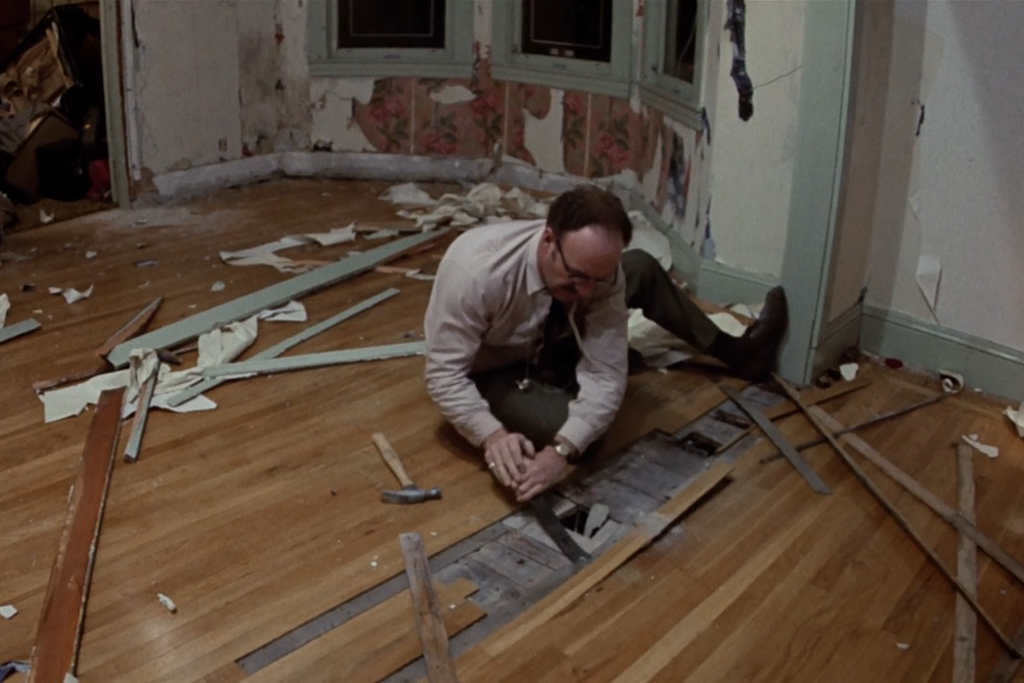 Nope. Not under the floorboards (or the walls). I had to admit defeat and you should look at that pattern on the buff in the top picture again, as you can’t buy it any more. I looked on all the buff websites and it appears to have been superceded. So, if you see someone out there wearing the same one I can assure you it isn’t me. Well, not unless the person looks like a combination of Val Kilmer, John Holmes and Joseph Merrick.

So, I had to buy some more. As I approached this task I decided I needed some spares in case of any future losses. The result was I went completely bonkers. Well, you would as well, if you realised it’s cheaper to buy them online from overseas, than it is in a hiking store here. This is what I’ve ended up with. 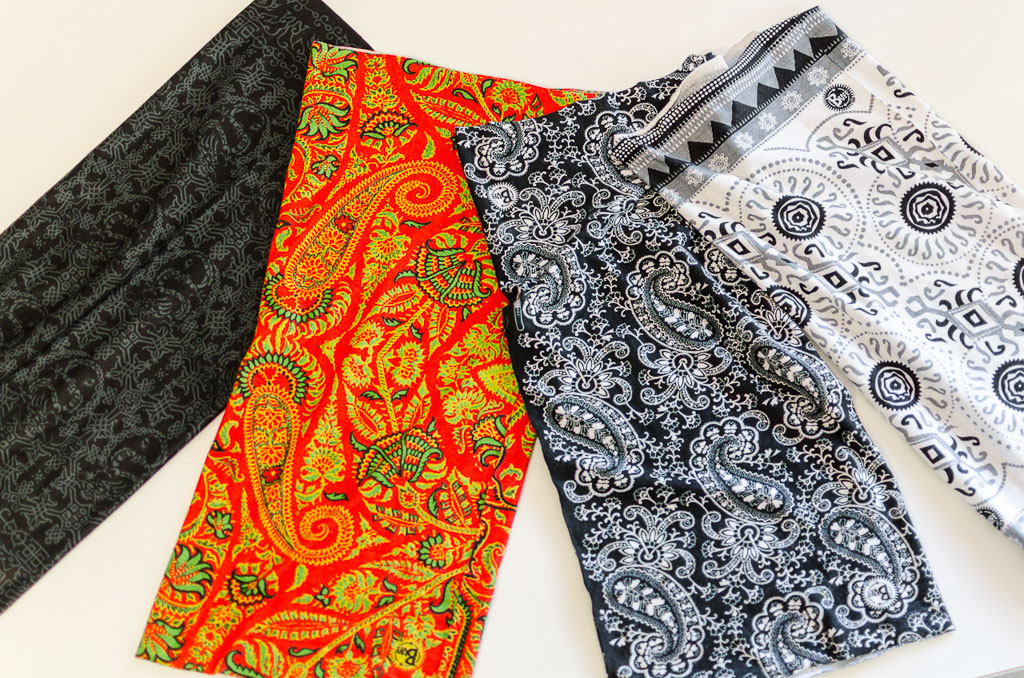 A complete buff smorgasbord is the result. Now, just to keep this boring post going I’m going to tell you which pattern each one is. Now from left to right, the first one is the Xoui, next up the Kindia, then the Mongar (sounds like an insult) and lastly the Abaya. Wow, I’m glad that’s over with, as it was hurting my brain typing those wacky names.

How do I wear it? I think every hiker in the history of mankind wears it ‘pirate’ style. It’s the most obvious and effective I guess. As this blog’s job is to help out fellow walkers, I’ve decided to show you the various ways it can be worn. The buff of choice for me is the Abaya and I called in my stunt double to show me the ‘pirate’. He wasn’t in a very good mood though, which can be attributed to a lack of sugar. A complete finger-a-thon was the result. 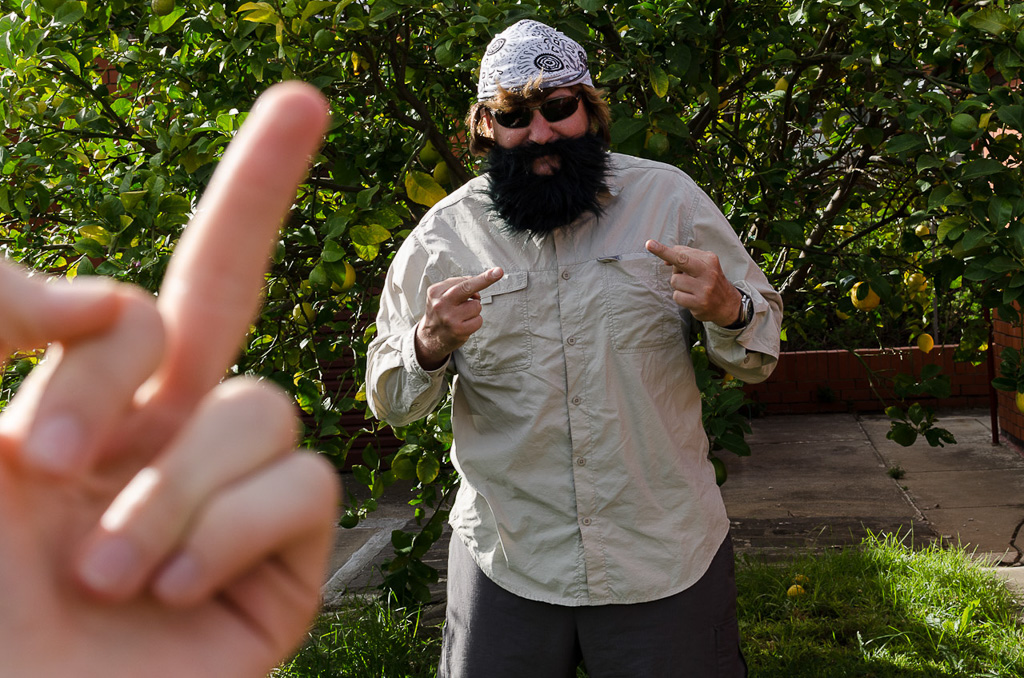 In fact, just to head into the weird world, there are actual videos, showing you how to wear it. What annoys me though is that none of more effective ways I’ve found are included. There’s a number which are quite efficient, so I guess I should show you. It may look odd at first glance, but I wouldn’t be so easily dismissive of ‘The Chef’.

There’s a number of others that look a little odd, but I’ve found they’re not too bad. Next up is ‘The Firing Squad – Passive’. 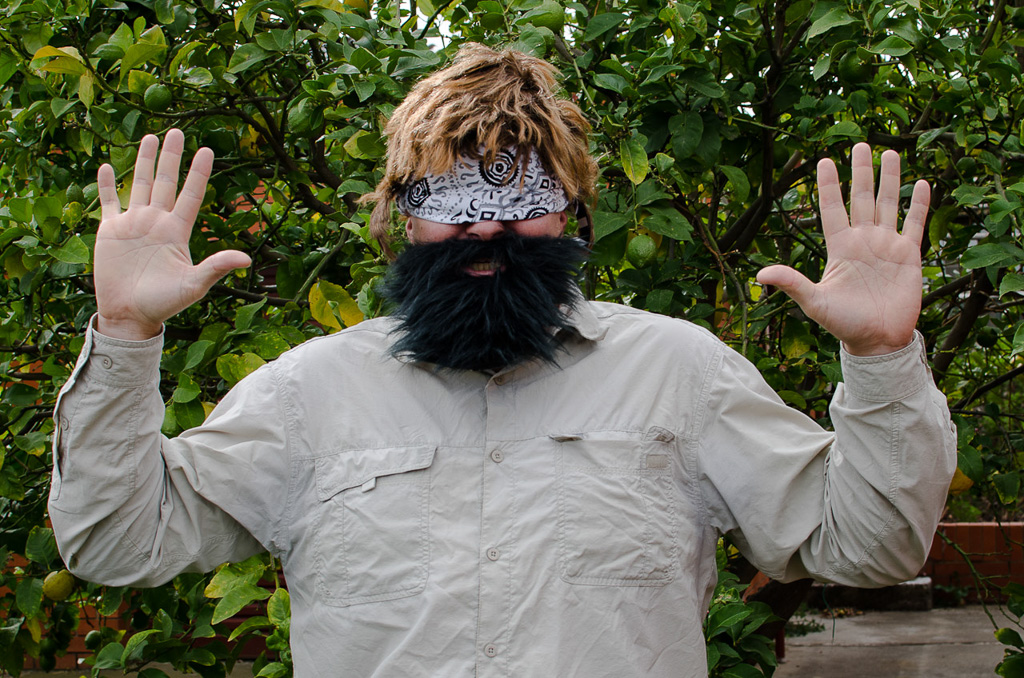 There’s even one that I’ve used whilst I was bringing sexy back to hiking. This one is called, ‘The Sensual’. Okay ladies, just hold yourself back for a moment.

Next up is this one which works quite well if you’ve had too much cocaine and lemon tarts in the one sitting. What’s it called? Well, that’s obvious, it’s ‘The Insane’. 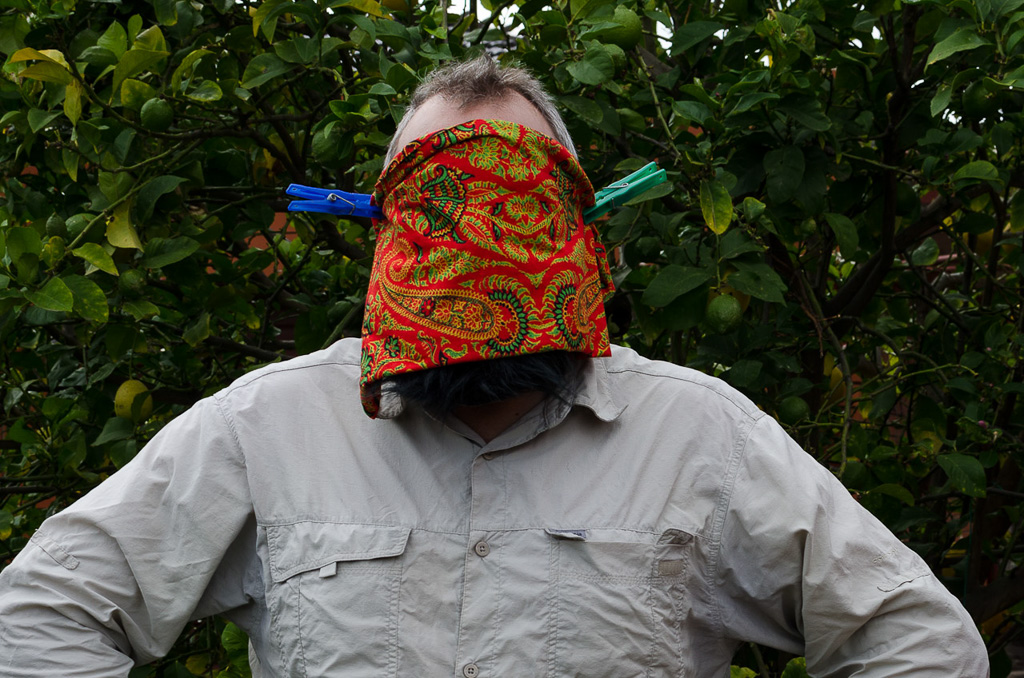 Remember the ‘Firing Squad – Passive’? There is of course a flip side to that one and naturally it’s, ‘The Firing Squad – Fearless’.

So, there’s a few more methods than just the plain old ‘pirate’. Now, I mentioned earlier that I don’t just wear a buff. It has to be combined with my Outdoor Research Sombriolet Sun Hat. It’s wide brimmed, soft and comfortable. Even the chin-strap, which can be tightened, feels good during hurricane force wind. 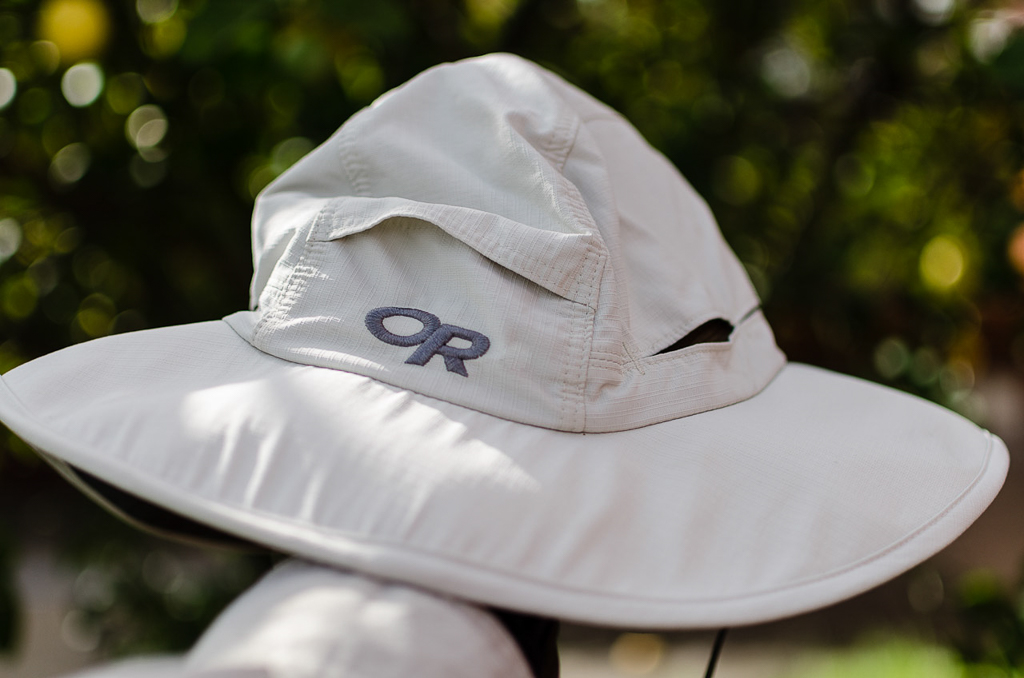 So, that’s it for my summer headwear, but there’s a couple more things. Being a MYOG sort of a bloke I have built a combination Outdoor Research hat with anti-alien and government properties. I’m not sure why other people don’t use my method. Let’s have a look. 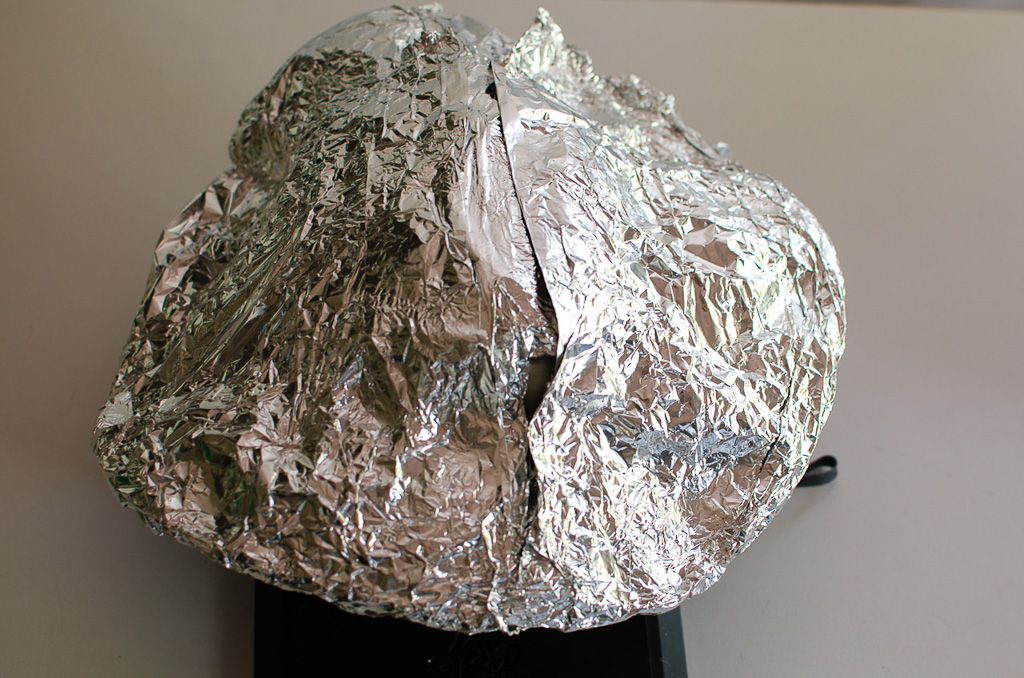 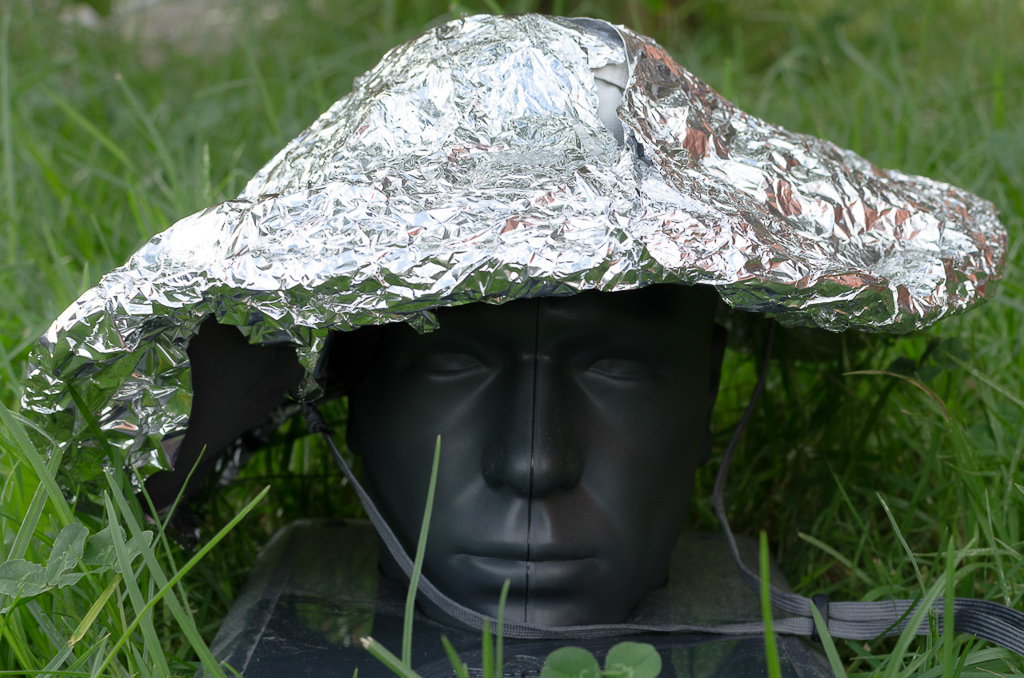 I’ve found it can block nearly all government thought reading waves, plus most alien activity. You may laugh, but have you ever been abducted by aliens? It’s pretty annoying getting sucked up the chimney by low flying UFO’s on a Friday night. I’d lose my weekend stuck on a flying saucer, and about the only win I had was one trip where I managed to knock off one of my captors wallets. Now, with my special hat I’m more or less safe. If I hear the distinct humming above the roof of my house, I adopt the ‘behind the couch position’, which is well away from the chimney. 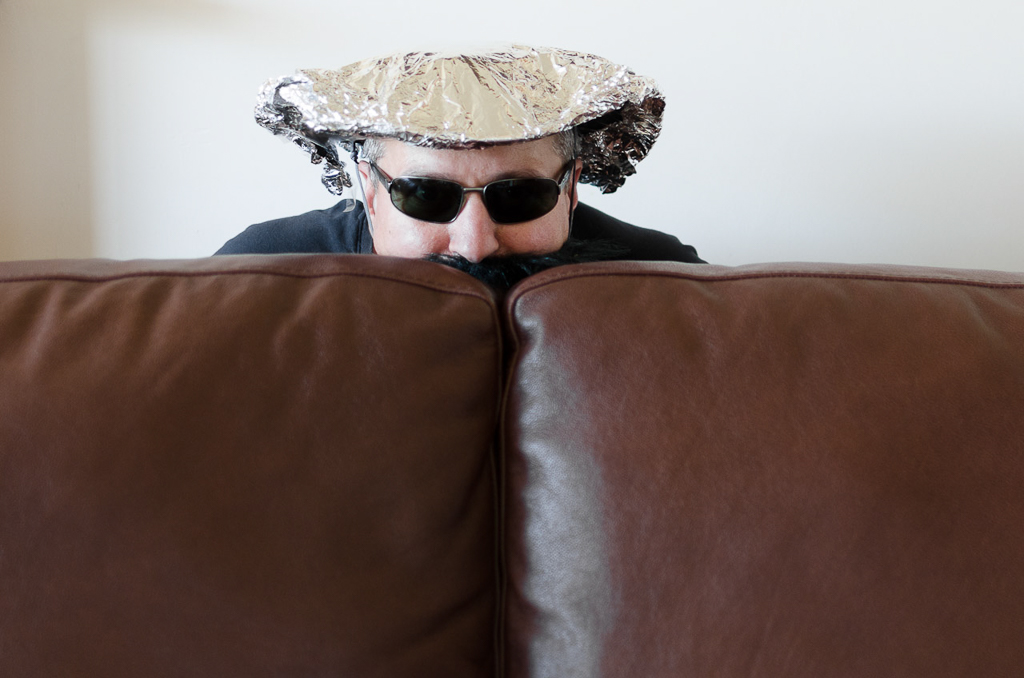 This works, but if you’re a bit slow you always have another line of defence. We’re hikers aren’t we? I don’t know anyone who can walk for a week and not develop a nostril flaming stench. You have to turn this to your advantage and if the aliens are getting close, give them a ‘stench slam’ of week old underpants, socks and shirt. You’ll be pretty safe if combined with an aggressive ‘twin rigid digits’. Who could survive this? No one, that’s who.

So, that’s about it. There’s not much else to do other than get the saxophone out and while you’re at it, give yourself a pat on the back if you can pick the movie without looking at the tags.