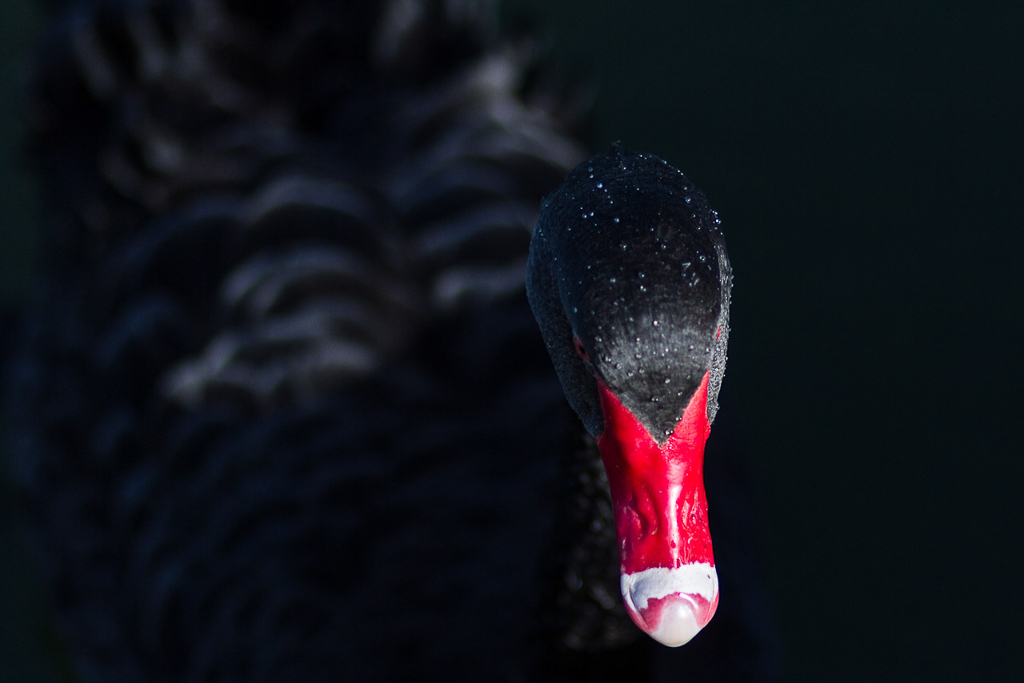 Right. Where have I been? Well, I’ve been pretty run down for the last few weeks with some sort of bug. I told my doctor it was clearly a case of Malaria which I’ve diagnosed myself online. Funnily enough she didn’t believe me. Hang on, surely the internet isn’t wrong? Oh yeah, by the way, the photo above has nothing to do with the following post. I like to start off an entry with a picture and I found this one of a swan at Albert Park Lake and decided it was my quintessential swan image. I’m afraid I’ll never take a better swan photo.

Anyway, since I’ve been dying I haven’t had a chance to do much walking. Instead Red (hey, that rhymes) over at ‘Amazing Australian Adventures’ volunteered me for a sort of blogging chain letter called ‘Seven Super Shots’. It appears to have been started by a mob called ‘Hostel Bookers’. I’ve had a look at their website and they seem legitimate. Maybe. Then again, they could be a front for a Colombian drug cartel for all I know.

So, the story is seven photos with a theme. The original idea is to have pictures of grandeur, which will sell the blog with image magnificence. Being the wild man though, I’ve decided to go with a bunch of plain old pictures, but fasten your seatbelts as I’m going with cutting edge descriptions. So, take your pants off and grab the Doritos as I begin.

A photo that…takes my breath away: 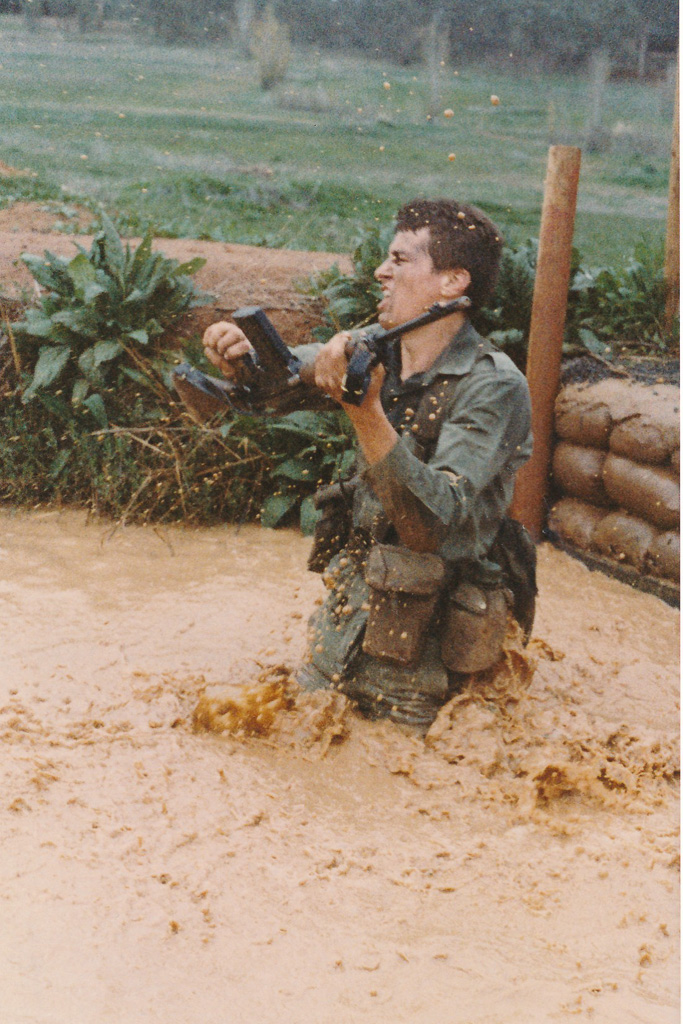 Take my breath away? Well, where I’m about to go regarding this photo is pretty obvious, but I’m going to do it anyway. First of all I need to set the scene. I’m 19 years old and this is in the final week of basic training in the Army at Kapooka in New South Wales. It’s also June which is mildly chilly and not far off dawn.

There’s a painful thing called the Battle Efficiency Test (BET) which consists of a 15 km run with a time limit of two hours. Not bad hey? The trouble is it included rubbish like in the photo above. This particular obstacle was called the ‘bear pit’. I’ve no idea why, but the catch is the picture doesn’t show I still had a lot more sinking to do before I hit the bottom. I remember being boiling hot from running and jumping into this absolutely freezing water, which caused my testicles to launch from ground level to the destination of being suspended from my mouth. There you go. It was always going to be that joke wasn’t it?

A photo that…makes me laugh or smile: 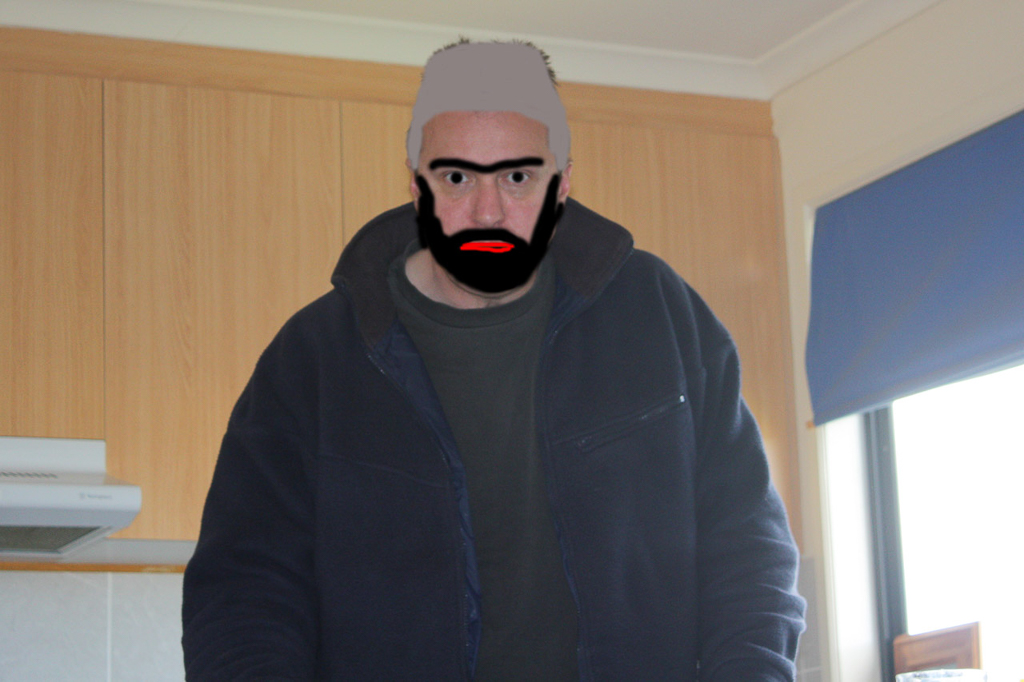 The other day I was perusing my complete nightmare of images stuck on various hard drives when I came across a folder marked ‘Phillip Island 2008’. I scrolled through the pictures until I came across this one. I had no idea my son Ben had done this to the photo, but I can say it made me chuckle. He informed me the alteration occurred on the same Phillip Island trip, as he was “bored out of my brain”.

We stayed a few times at a holiday house there, but it didn’t have any internet and as a total package a really crap TV as well. I guess this is not what you want when you’re 13 years old and as a result shenanigans occurred to the odd picture.

A photo that…makes me dream:

This is a night shot that was also taken at Phillip Island and it appears to be a haunted house. This is the crap I dream about. Is there any chance of having a good nights sleep this year?

A photo that…makes me think: 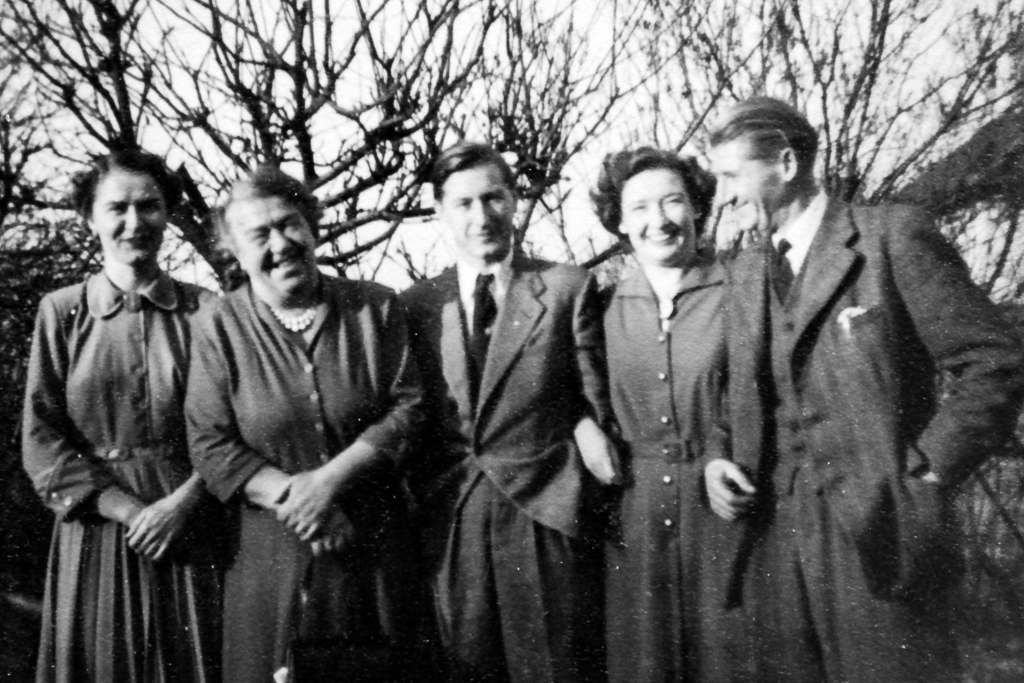 I’ve gone for a ‘ye olde’ shot from the 1950’s, which was taken in England. I’ve seen it before, but it always makes me a little sad when I look at it as everyone in the photo has passed away. It’s the Evans family and my mother Winifred is fourth from the left. They were one of those tough old English families that lived through World War Two and experienced things in their youth which I’ve never had to face.

On the far left is mums sister, Molly who was fantastic aunty. Loving and active, she would take me on trips when I was a boy to different parts of the south coast of England. She had her own demons though that was never discussed. At about 18 years of age, she dated a pilot from the RAF. He was killed early in the war and she never dated another person for the rest of her life, until dying five years ago in her 80’s. Molly remained active to the end and I have a photo of her on my mantelpiece which she captioned ‘August 2000 in the Lothian Hills, Scotland’. She has a beaming smile and there’s nothing around her other than a vast, rolling landscape.

Mums mother is second from left and her brother, Bert next to her. Who’s Bert? No idea really, as I never met the bloke, even whilst living in England. He became the principal of a school over there, but I’ve no idea of the name. He’s more known for a lifetime of being a ‘pants man’. He certainly chalked up a few weddings and the odd mistress along the way. He also died only a few years ago and I still hadn’t met him.

Mums father on the far right was a medic in the British Army during World War One. What did he see? I guess a lot and to top it off he was gassed as well. I can imagine that’s not the greatest thing to live with for the rest of your life.

My mum? Well, she lived through the blitz in London during the Battle of Britain, so her youth was pretty hectic as well. The rest of her life though was blighted by schizophrenia and it’s hard to describe what it’s like to be with a person suffering from that. Not the greatest, but she lived with it as long as I can remember before passing away in 2006. Mum was pretty artistic and always maintained her family was related to the writer George Eliot. Was it true? I’ve no idea, but maybe I should look into that one day? What more can I add? Lots, but this spiel for this particular photo has to end somewhere.

A photo that…makes my mouth water: 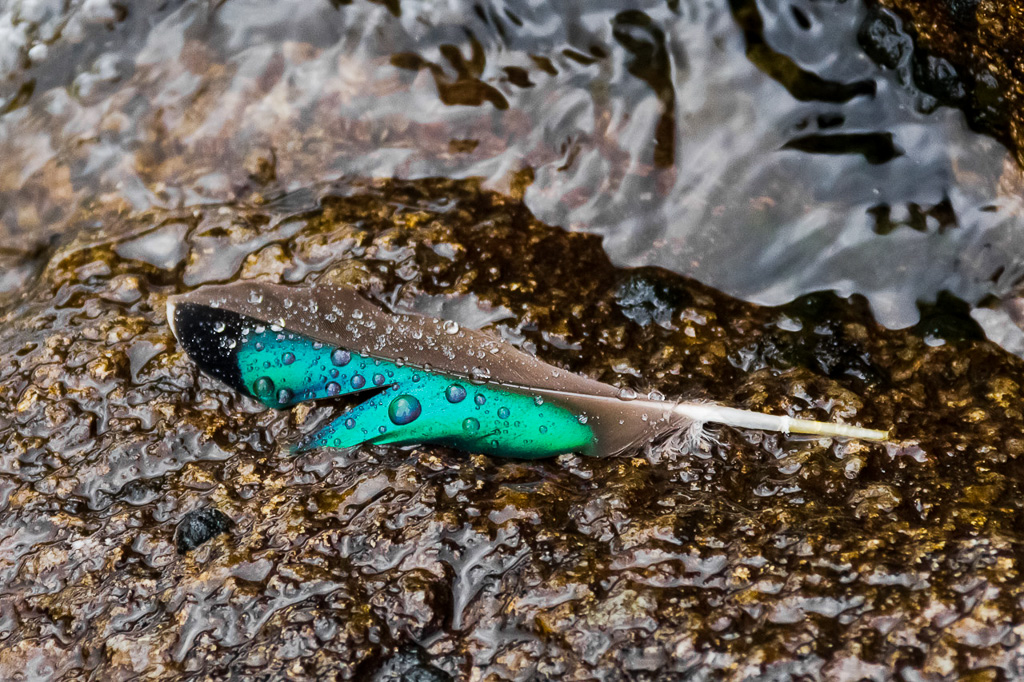 With that caption, it should be a food photo shouldn’t it? Not for this wild man though. In walking I have a soft spot for two things. Feathers and water. How good is this? It combines the two! This was taken on the edge of Blue Lake near Mount Kosciuszko. Gleaming with reflected light, covered in water droplets and a colourful green to top it off. How could your mouth not water looking at this?

A photo that…tells a story: 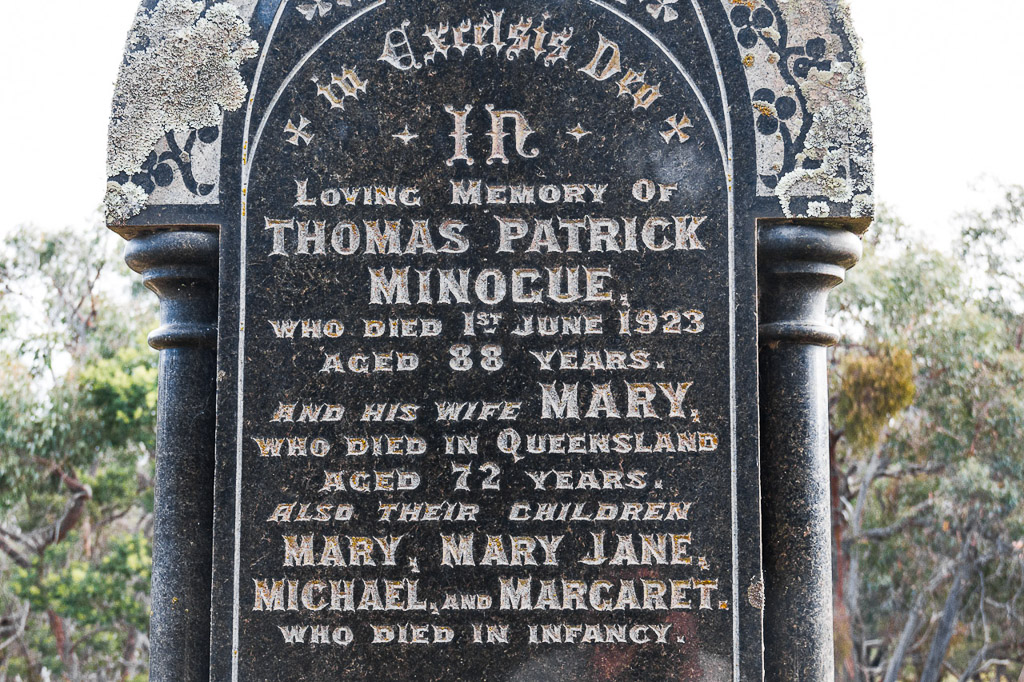 Yep, let’s get morose again. This is a gravestone at the historic cemetery at Steiglitz. That whole area is a great spot to walk in and even better is this cemetery. I love an old cemetery which goes hand in hand with my fascination with death. Pretty cheery, huh?! Well, who doesn’t think about it as you get older?

First of all, I found this one of the more tragic headstones I’ve seen in a while. Four children that died in their infancy? Did they have more or just give up? It goes back to that time in life where it was an achievement to live past childhood. If you survived you had a chance for a long life. That’s pretty hard to imagine these days with our level of health, but the gravestone above tells a story that interests me.

Oh yeah, back to death again. What’s after death? Bright shiny lights, people in white outfits?! My theory is this. Who’s ever had a general anaesthetic? Remember the bit between being knocked out and waking up? That sort of void of nothing? Well, I reckon that’s exactly what death is like. It’s nothing at all. That’s not too bad when you think about it. At least it’s a decent sleep for a change.

My other death thought is this. I suggest if you’re going to kick the bucket then hopefully it’ll happen whilst you’re in bed, as my experience is that there’s not a lot of dignity in sudden death. What do I do for a job? Well, put it this way I’ve seen death in lots of different ways. Violent mainly and I can say I’ve ticked all of the most eye popping visual boxes. Shot, stabbed, decapitated, hanging etc. I must say in all this I can’t remember too many lying in a bed. My advice? Don’t die violently, as it doesn’t look like a lot of fun.

The photo…that I’m most proud of: 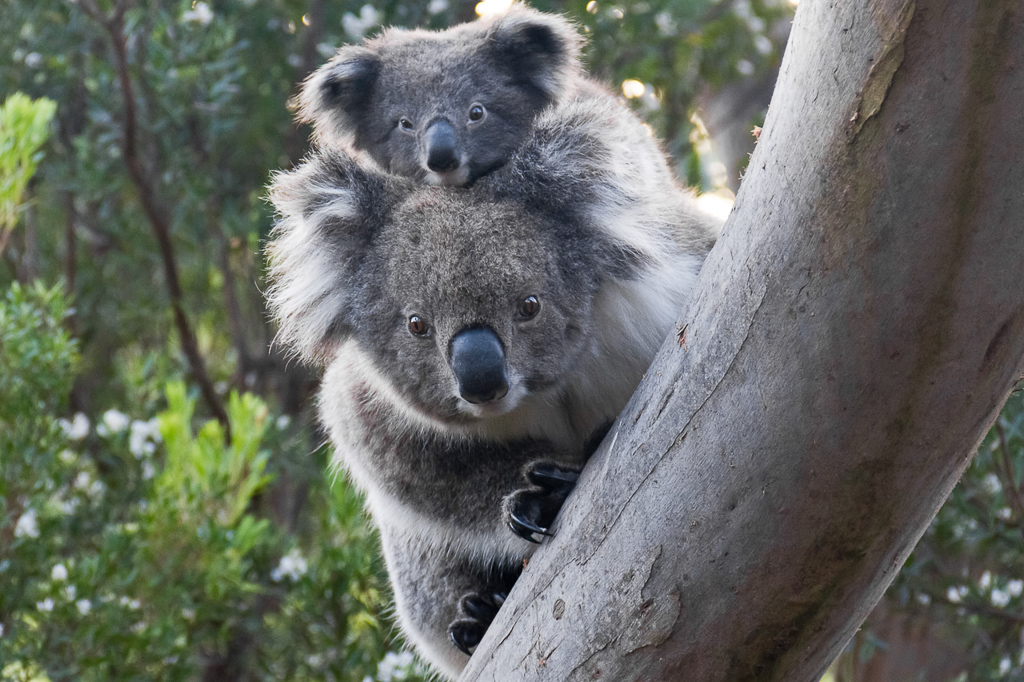 Now, you can’t tell me this isn’t a good koala photo. I refuse to listen to any differing opinions! I took this at the Cape Otway camp-site on the Great Ocean Walk. A couple of things first. It was taken in low light as they descended a tree and believe it or not, I was the only one taking pictures, whilst about 15 people were sitting nearby just talking crap. I’ve never seen a koala and joey like this before and knew it would be pretty special if I got a nice image. So I went nuts with the photos, hoping to get one good one. I was using an 18-135 mm lens zoomed right in and the light was so dim the ISO was set to 1600. I’ve got a few shots, but this is the only one where they were looking directly at me.

I’ve entered these photos in the odd wildlife photo competition and they’ve never been short listed. Frustratingly in one competition a koala photo got into the top ten, but the koala was so far away it appeared to have been taken by a low flying satellite. It truly was a crap photo. What about my koalas?! I have a sneaking suspicion some people think they’ve been taken in a zoo or animal enclosure. Umm.. No, they were taken in the bush I’m afraid.

So, there you go. It’s all over. This started out like something fun, but it turned out to be a bit of a pain in the arse. I’ve got so many photos, but the method of storage is a joke. Anyway, these photos will do. Now, I’m meant to continue the blogging chain letter going and nominate other people to attempt this, but I don’t know if I can pass this pain onto someone else though. My suggestion is that if any victim happens to read right through this post, then they are free to give the concept a go themselves.

I guess that’s it? I really should do a walk soon I think…