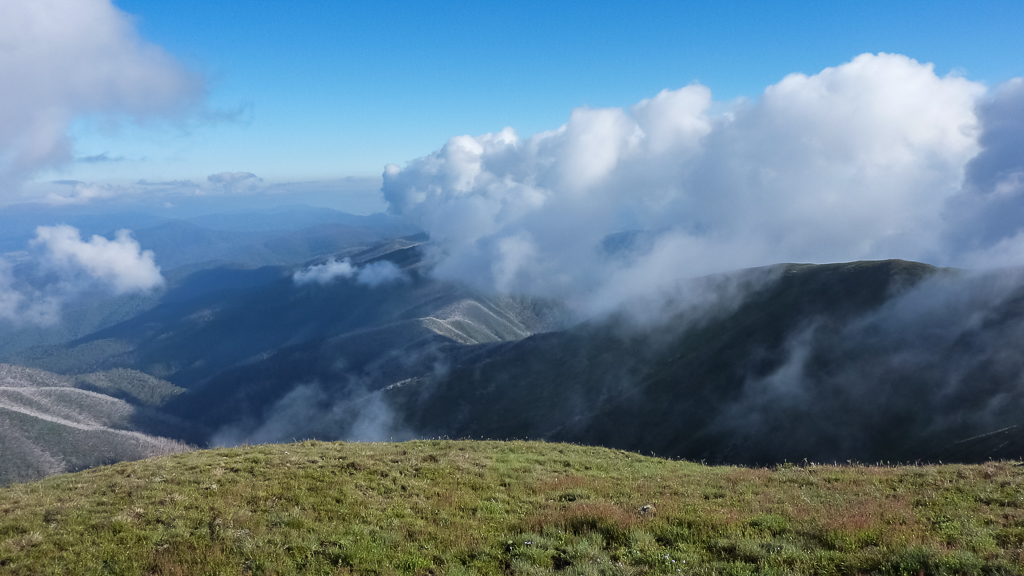 I’d spent a peaceful night on my own in Federation Hut. I half expected other walkers to appear late in the day, but it remained quiet. I did have intentions of waking up early and climbing Mt Feathertop to see the sunrise. I can imagine it would be amazing, but alas, I snoozed way too long and by the time my eyes opened, it was well and truly daylight.

I may not have missed anything anyway, as the entire area was covered in low cloud, obscuring the hills around me. It seemed to linger as well and I was a little concerned it wouldn’t lift, so my Mt Feathertop views could be ruined. I took my time eating breakfast and waited to see if the pea soup would begin to dissipate. 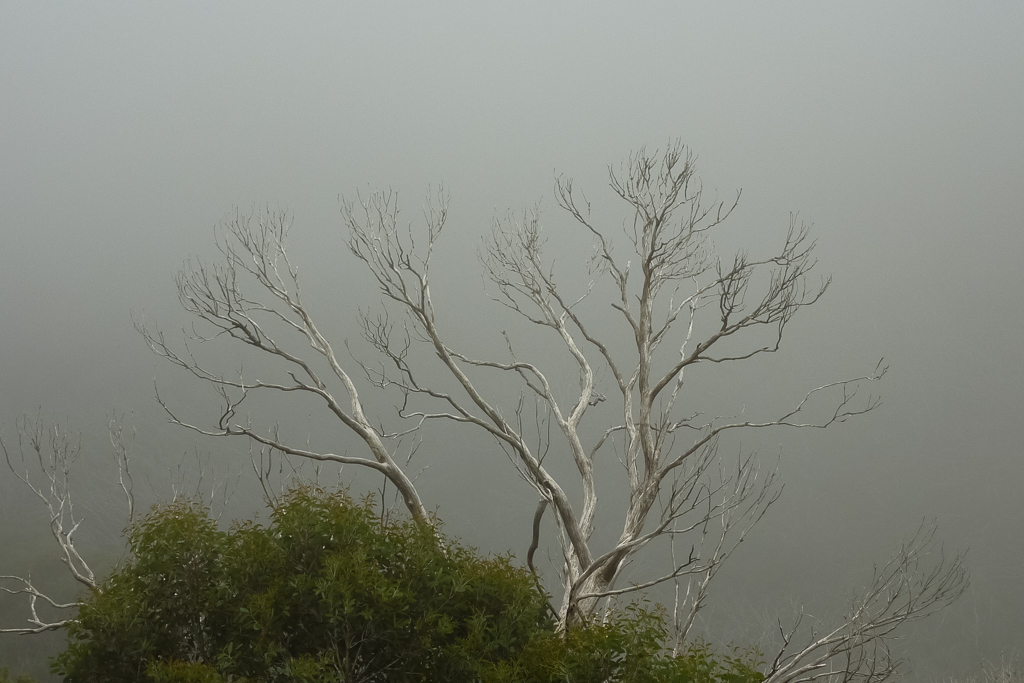 I had a fairly long day of strolling coming up. The plan was to walk from Mt Feathertop to Bon Accord Spur via the Razorback. I’d descend via Bon Accord Spur and somehow make it back to the car. I’d guessed it would be around 25 km before I made it back to the car, so I wasn’t being a complete slob, spending my morning lounging around the hut. The first photo I took for the day was at 6.23 am, so I did have a bit of urgency about me.

I gave the huts water tank a bit of a shake. Drinking plenty, before filling up all my containers, which totalled four and a half litres. I wasn’t sure where water could be found along the Razorback, so I was banking on this amount to last me the day.

Packing up, I headed off into the mist. Mt Feathertop wasn’t always visible, but now and again the cloud would break and the summit would be exposed. 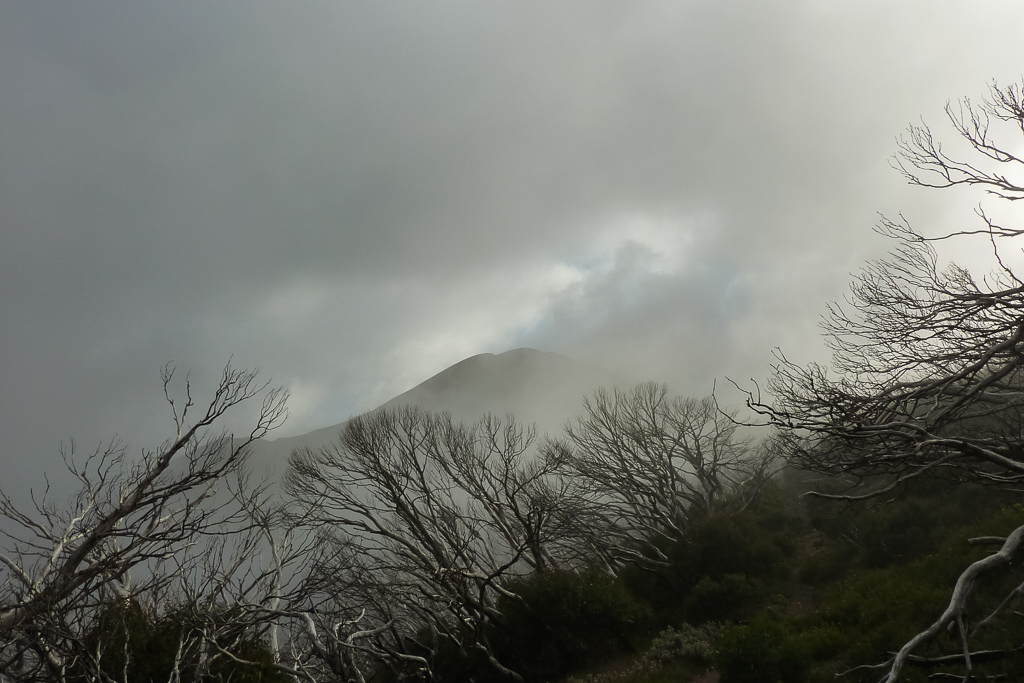 I wandered through the clouds for a kilometre or so, until I reached the junction of the Razorback and path to Mt Feathertop summit. I dropped my pack at the turn-off and began to follow the path uphill.

The landscape was interesting. On the western side of the mountain, cloud sat low amongst trees. Their white branches all pointing in the one direction, which was similar to what I’d seen the previous day on the climb up Bungalow Spur. 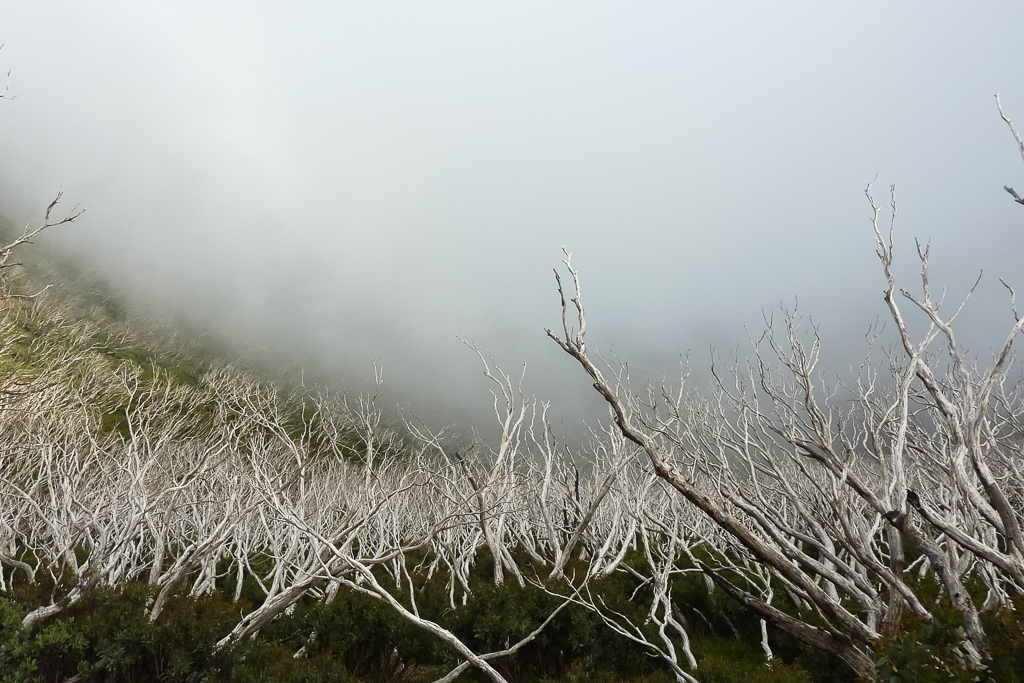 The path continued to climb, but without a pack, it was fairly easy going. At times it did feel a little eerie though. Cloud would suddenly envelop the mountain and I hesitated a couple of times, wondering if it was worth continuing. I don’t mind climbing hills, but I prefer to only do so when I know I’ll have a view. It had been a bit of a slog to get to this point though, so I was pretty keen to get to the top. Hopefully, with a bit of luck the clouds would lift a little. 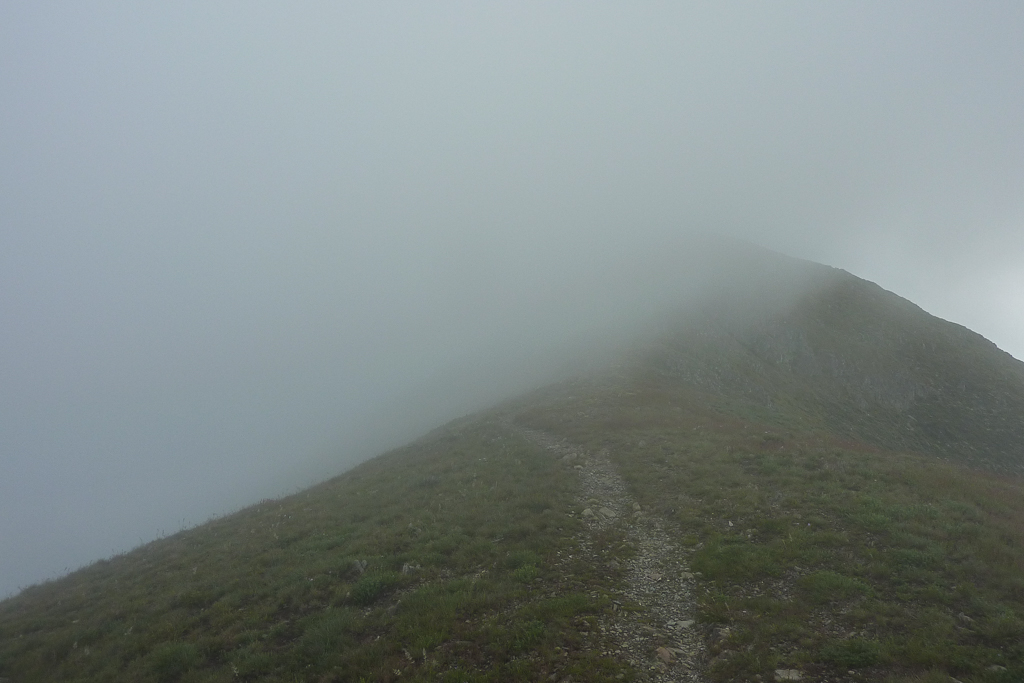 On and on I continued, until suddenly there was no more hill to climb. I guess I’d made it? Mt Feathertop is 1922 metres high, but I noted the GPS was reading 1932 metres. There’s a bit of an error rate with a GPS, but then again I could say it’s correct and I’m actually 10 metres tall. Unlikely, but you never know. Has anyone actually seen me to debunk this?

It was fantastic to be at the top and I sat down to get my breath back. The clouds continued to swirl around me. It was quiet and peaceful, as the sun began to shine through the mist and suddenly, I was rewarded with a view after all. 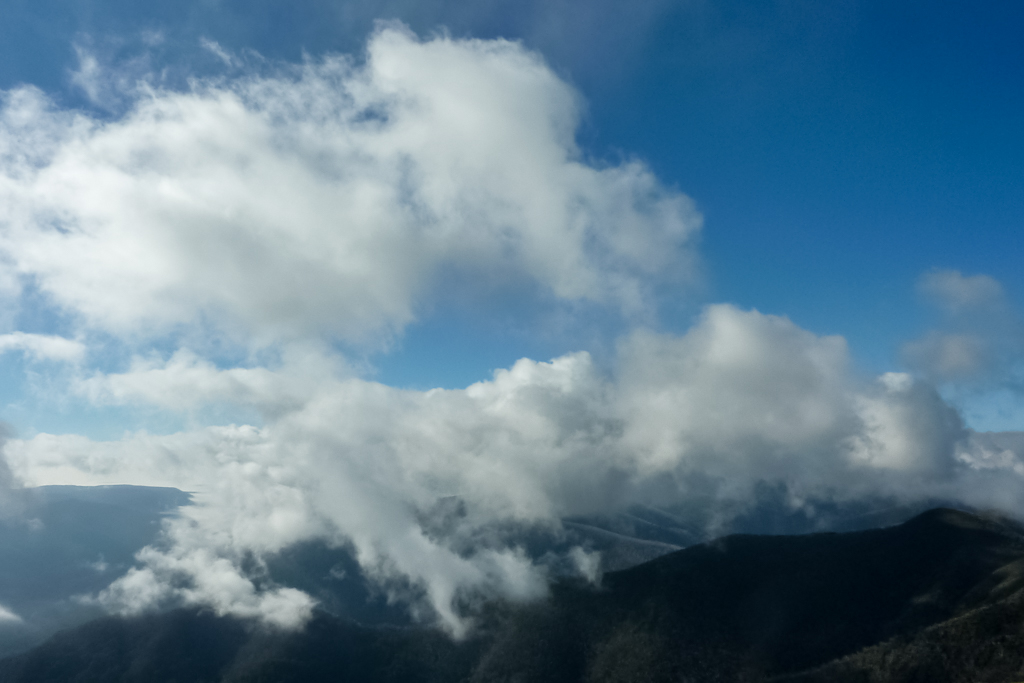 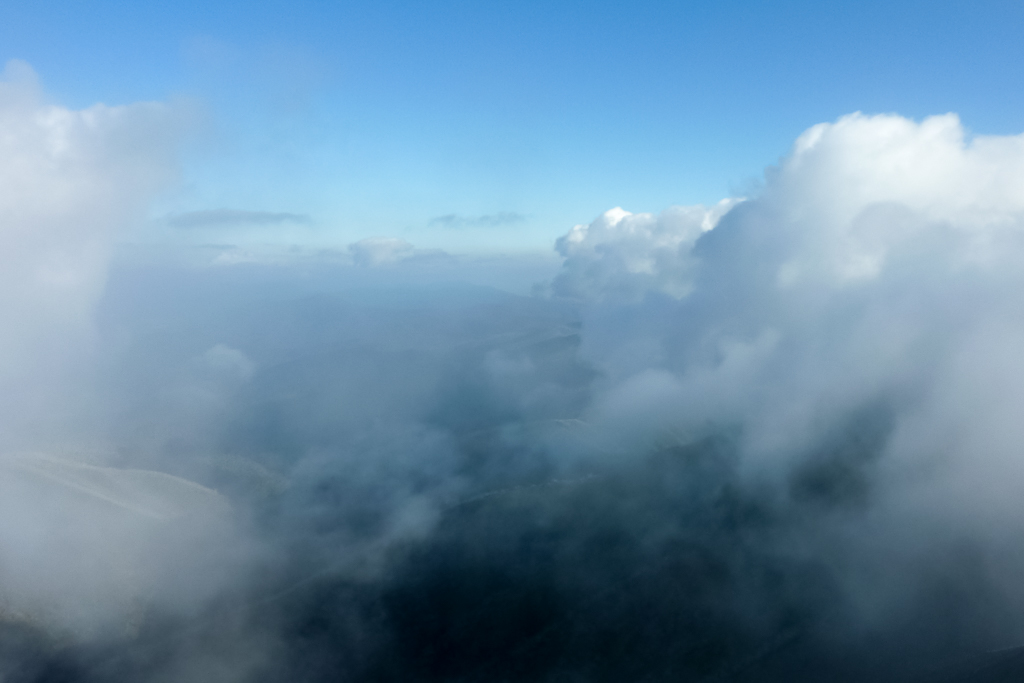 The longer I waited the more the clouds lifted and I was soon sitting in sunshine. It made the climbing worthwhile and I could have quite happily sat there all day. As it was, I had the mountain to myself and spent at least an hour taking in the view. 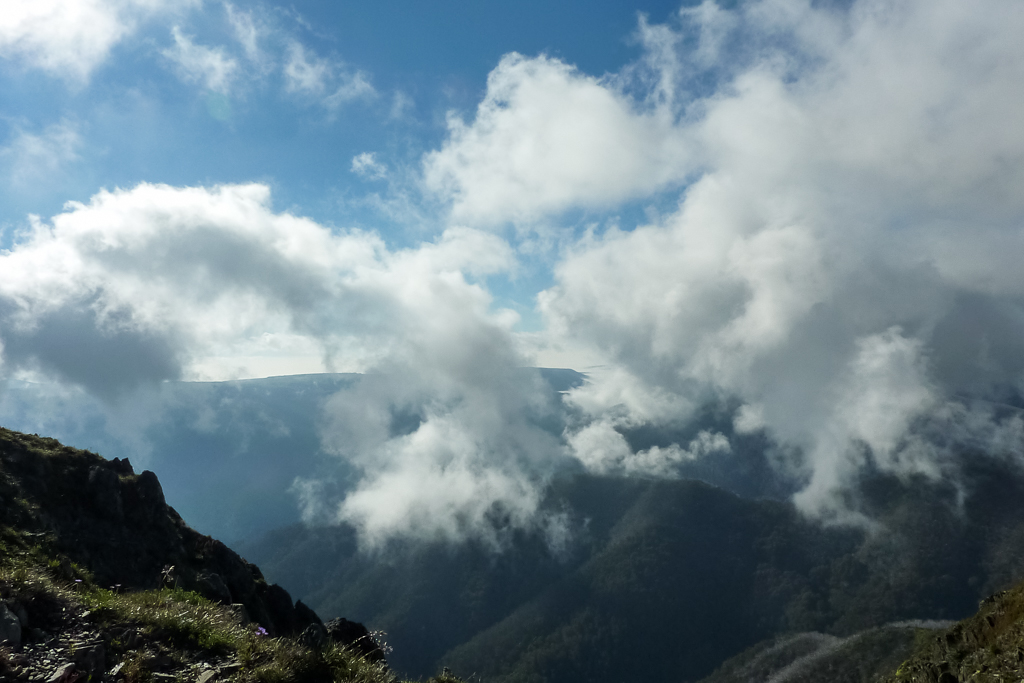 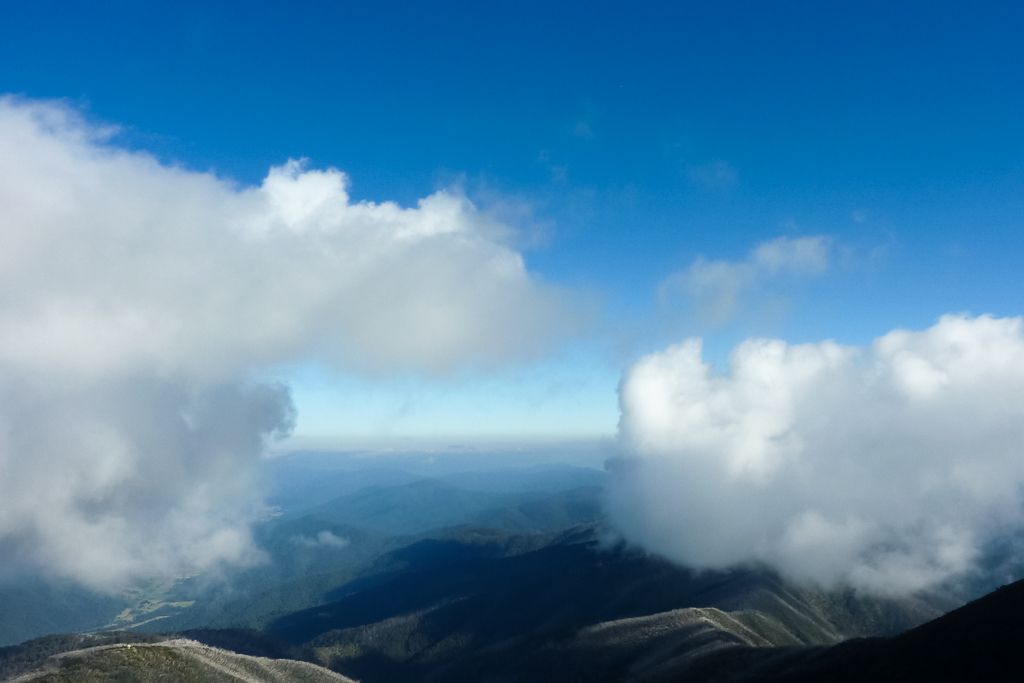 In my extreme lounging, I did notice something I didn’t expect to see. Lying next to me was a cigarette butt. A Winfield Red no less. Mm… Nothing like climbing a big hill, having a smoke and leaving the stinking butt on the top. Why do people do this? Is it wrong to wish the cigarette was butted out on the litterers eyeball? A bit over the top? Oh well, being a good bloke I picked it up to take it away. The world is a beautiful place, it’s just the people on it that’s the problem sometimes. 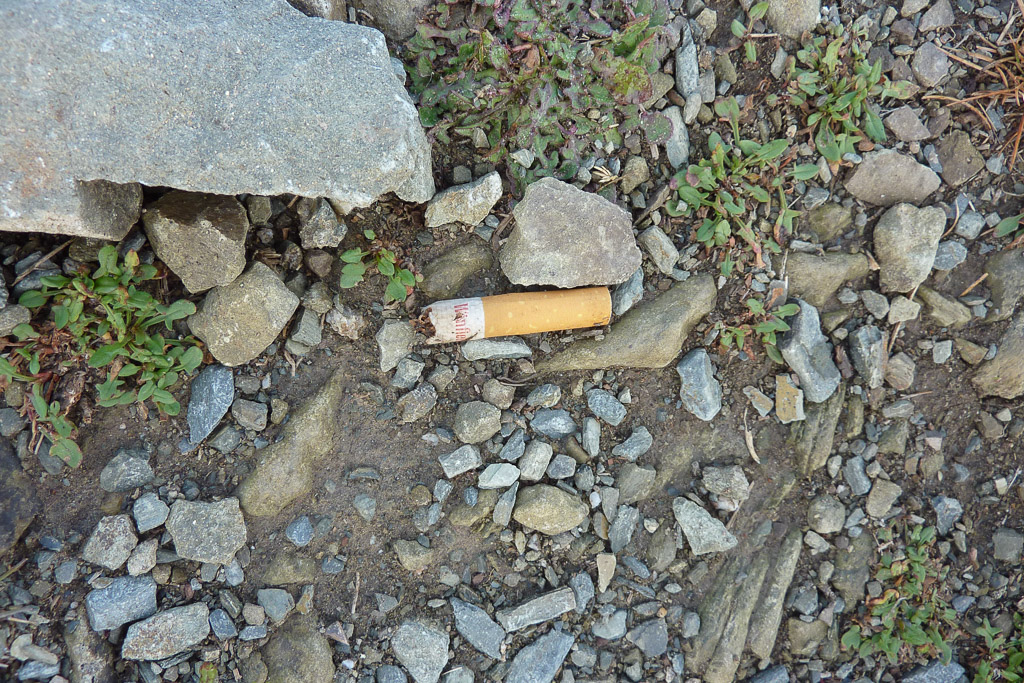 I even performed the ol’ selfie shadow photo. It’s a traditional favourite. 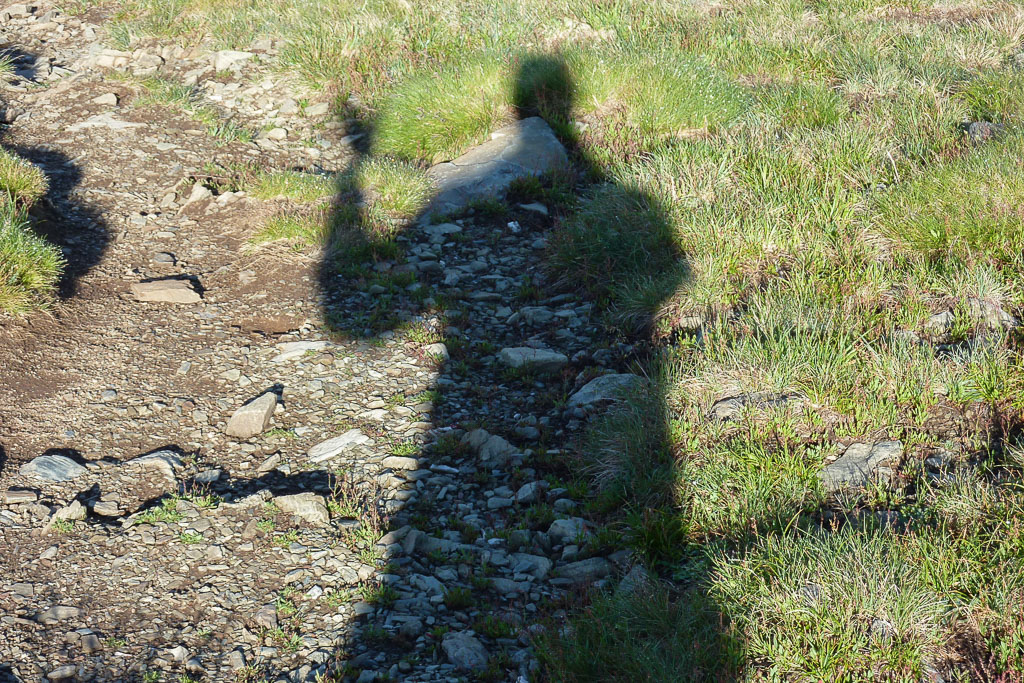 Well, it was a little sad to leave Mt Feathertop behind, but I slowly retraced my steps to where I’d left my pack. Just by dropping a few hundred metres put me amongst the clouds again. Now, it was the start of 10 kilometres along the Razorback Walking Track, until I reached the turn-off to the Bon Accord Spur. Then it would be all downhill back to the car. There was a good view of Federation Hut, as I started the walking the Razorback. The ridge ahead looked quite spectacular with its multiple undulations, which thankfully, didn’t look too outrageous. 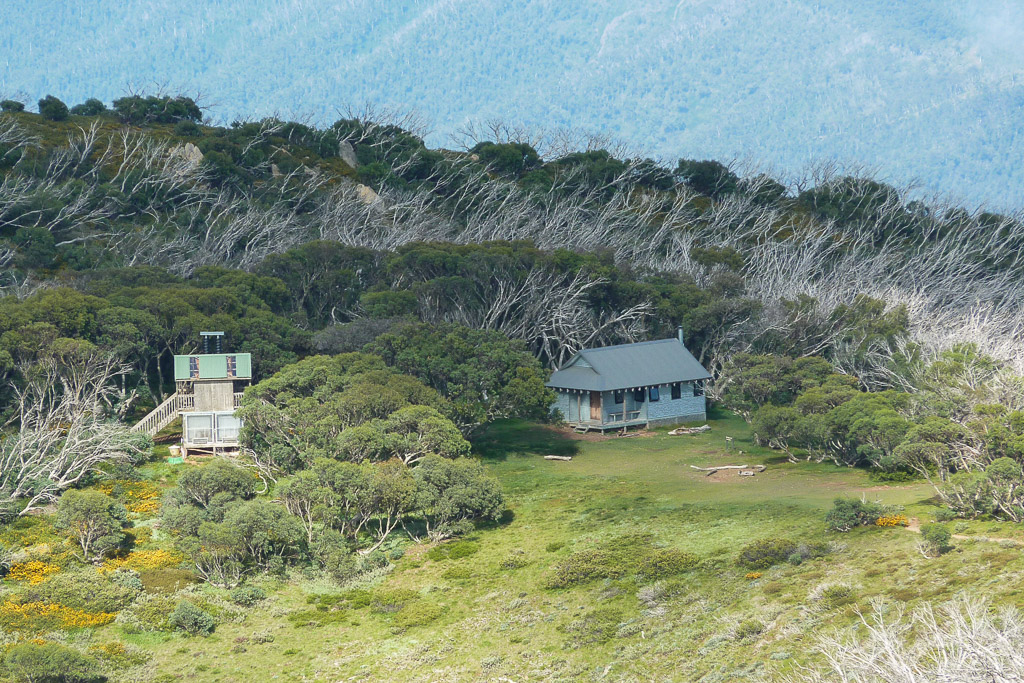 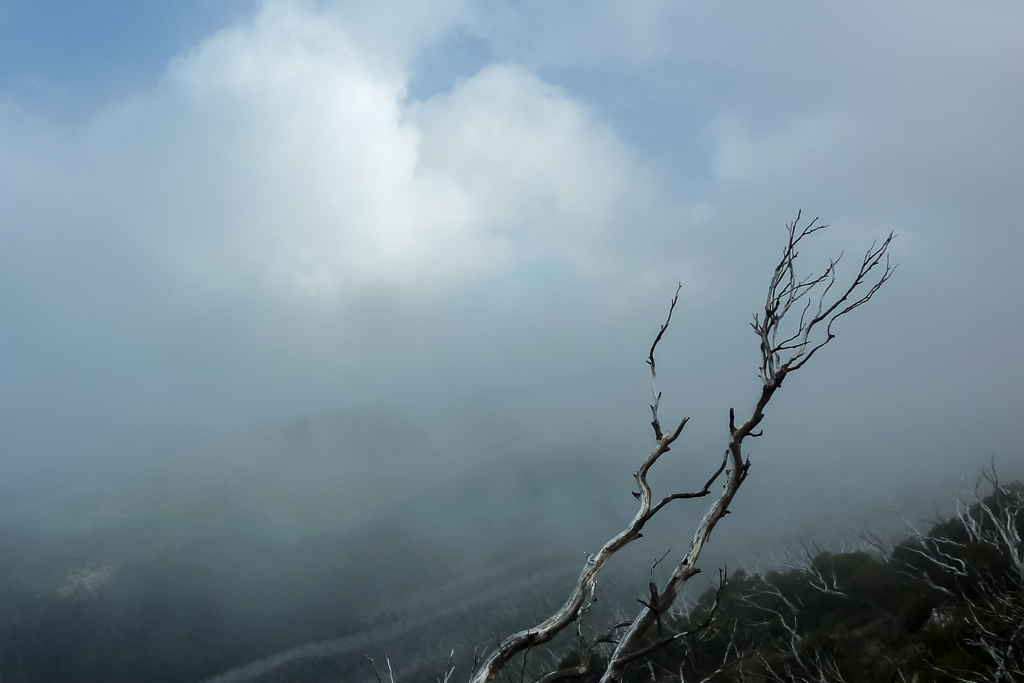 One thing I’d been stooged about. The weather forecast. There was absolutely no chance of rain and storms, as the temperature started to climb. I was getting hot with plenty of sweat running down my face. I made sure I glugged plenty of water, but was a little worried by how quickly I was going through it.

It was enjoyable walking for the views though, as I started to meet people coming the other way at regular intervals. The easy way to Mt Feathertop is to park at Diamantina Hut near the summit of Mt Hotham and then start the Razorback from there. It seemed to be the route of choice, as everyone I met had minimal clothing, runners and only tiny day packs.

It certainly made my full gear approach look a little overdressed. Oh well, what can I say. I was attentive to the weather channel, it’s an alpine area and I was fully prepared. Sure, I may have had enough stuff for an un-forecast Ice Age, but you never know.

Along the Razorback, the sharply descending slopes of Mt Feathertop were in full view. 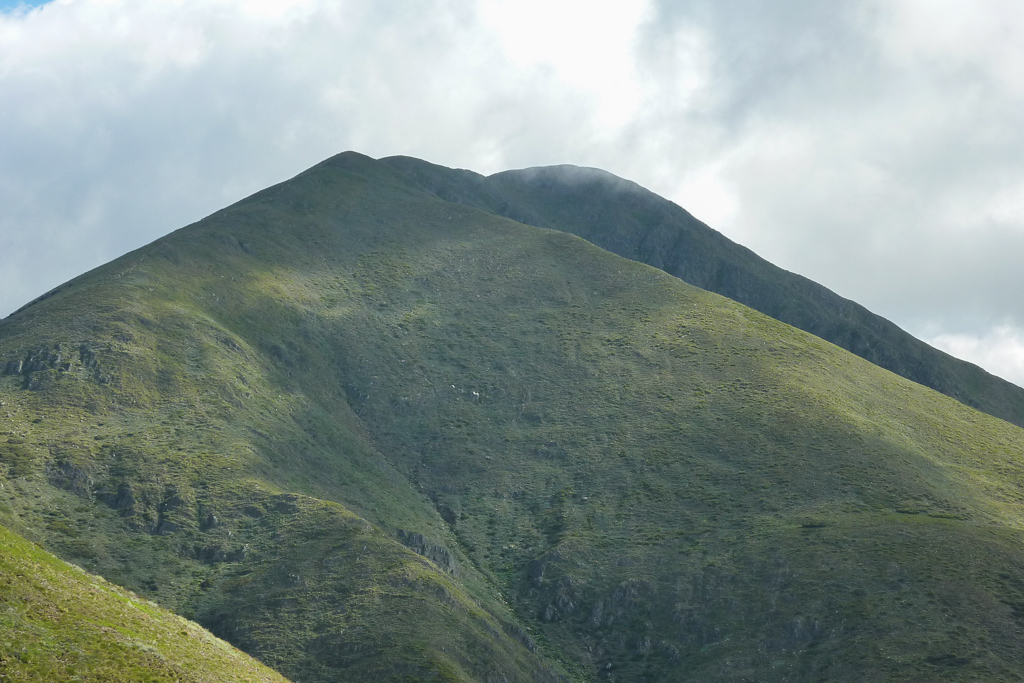 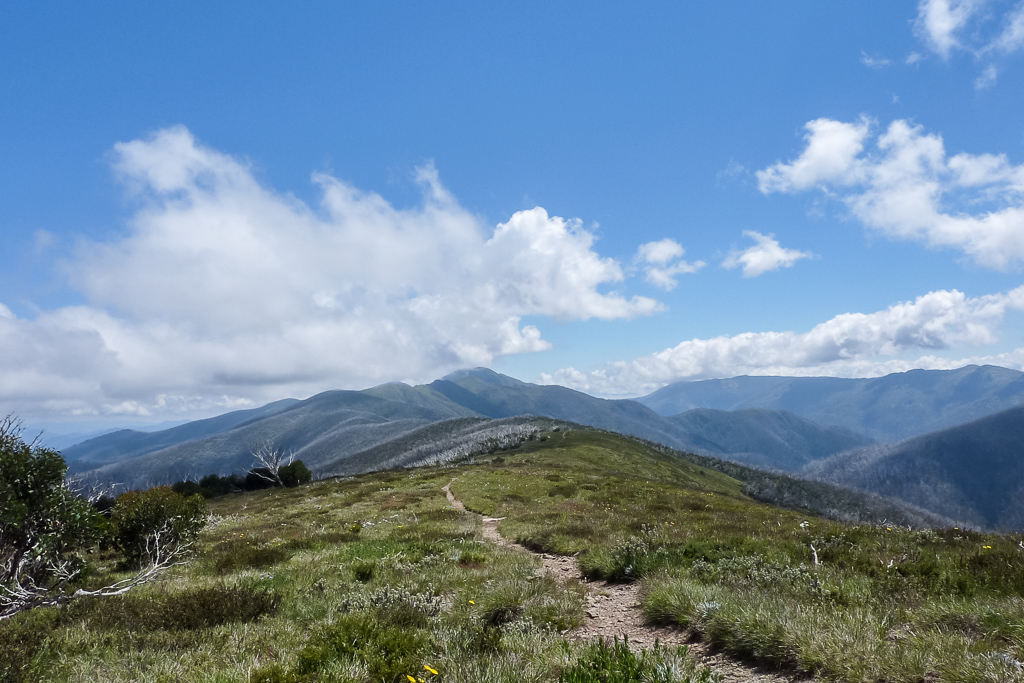 It was when I reached the end of the Razorback that I had a complete flame out. The early morning cloud had long burnt off and I’d been walking in the sun for quite a few hours. I wasn’t too bad until I slogged my way up to the Bon Accord Spur turn off. I really hit the wall during this section. It may have only been about 25 °C, but it felt warmer due to the lack of shade along the ridge line. I’d also begun to ration my water, which was not ideal, but I didn’t want to run dry.

Reaching the top of Bon Accord Spur, I decided to lie down and regain my mojo before descending. I think I spent over half an hour there and really, it’s a fantastic spot, with wide open vistas no matter where I looked.

I must admit, I was glad to be descending for the rest of the day. I didn’t have a lot of water with me, but was confident I’d make it once I was going downhill.

After my extended rest, I threw the pack on again and began to wander down the track. 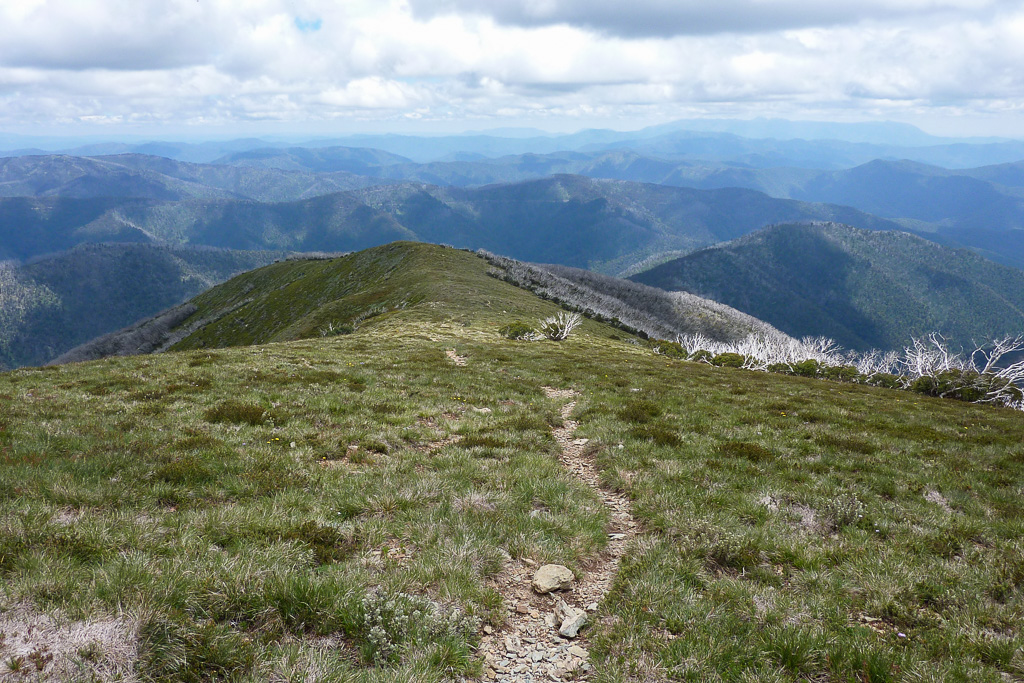 Heading down, I think I mentioned in my previous entry about this spur, that I found the whole descent sucked! This was the first time I’d walked it and didn’t know what to expect. Initially, whilst high it’s quite nice on the open ground. Then it starts passing through trees, which is still pretty good. 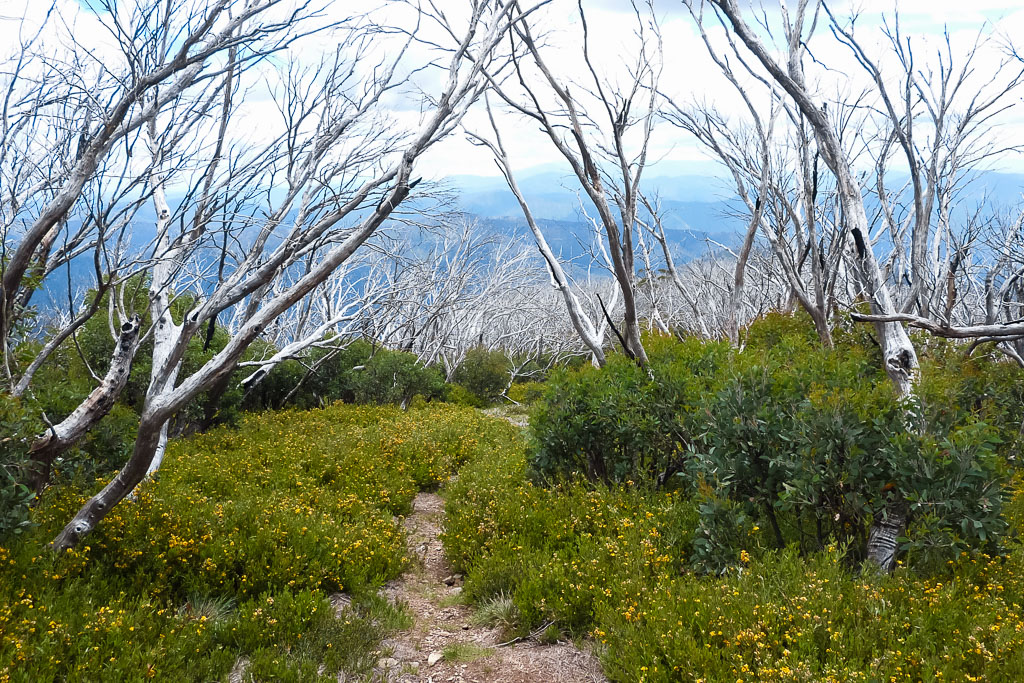 Through the trees – Bon Accord Spur

Then once the vegetation got thicker, eliminating any views, it felt like a slog. I was too hot and my dodgy knees were feeling the stress of descending on the occasionally loose surface. It felt like an eternity and the fun had well and truly gone for the day. I stopped briefly at the ruins of the Bon Accord Hut, which was the only highlight. I’m not sure how much of a ‘highlight’ it is, but at least it broke up the journey a little. 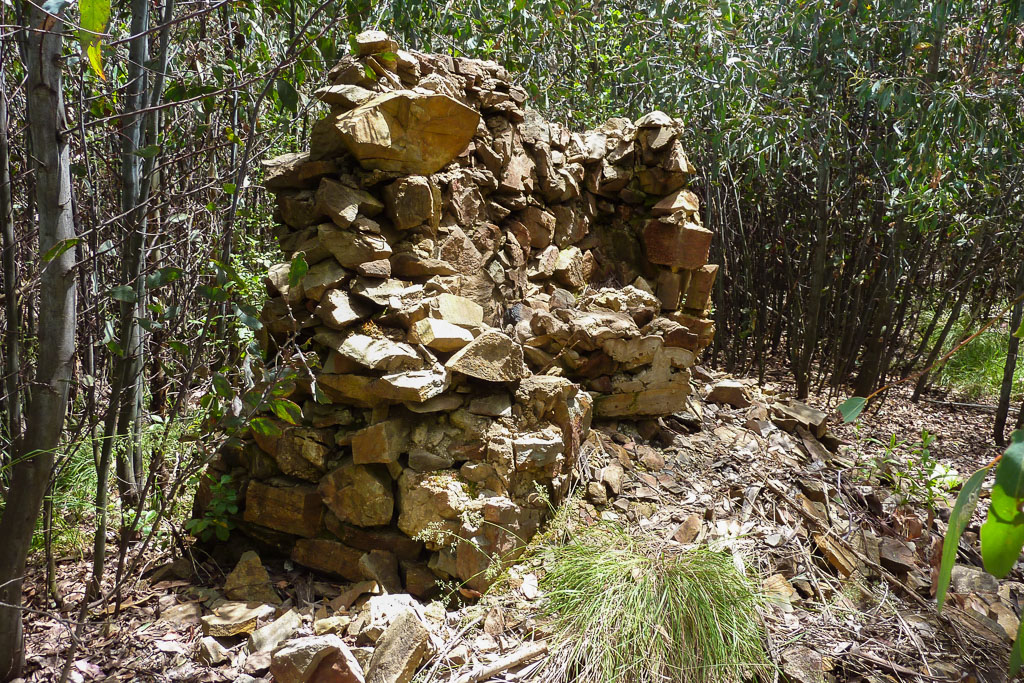 Half way down, I used up the last of my water. I don’t think there’s a worse feeling whilst walking than running out of water? I guess there are a lot of other bad things, which could happen. Being hit by a meteorite maybe? Running out of water must come a close second though.

I could hear the sounds of the running water from the river below and it’s quite deceptive. It felt like I was one corner away from seeing the flowing water, but it never seemed to come. I thought I was having an hallucinatory experience.

Finally, I reached the bottom where Washington Creek is crossed. I threw down the pack and immediately doused myself in the cool stream. It really did feel like a lifesaver. The liquid felt fresh and looked clear, but I felt a bit fussy about drinking straight from the stream. I was probably being overly cautious, but I wasn’t a long way from civilisation, so I thought it best to be careful.

Popping in a purifier tablet, I didn’t move for half an hour, which is supposedly the time needed for the pill to work. I must say, a second after the half hour mark was reached, I nearly drowned myself. It perked me up enough to continue and now I had a few kilometres of flattish ground to cover before arriving Harrietville.

Along the way, I noticed a large cutting in rock on a hillside. I presume it’s from an old mine. The hole appeared quite deep and anything could have been in there. Jimmy Hoffa? Maybe Lord Lucan? Anyway, I wasn’t in an exploring mood, so I took some pictures and kept walking. 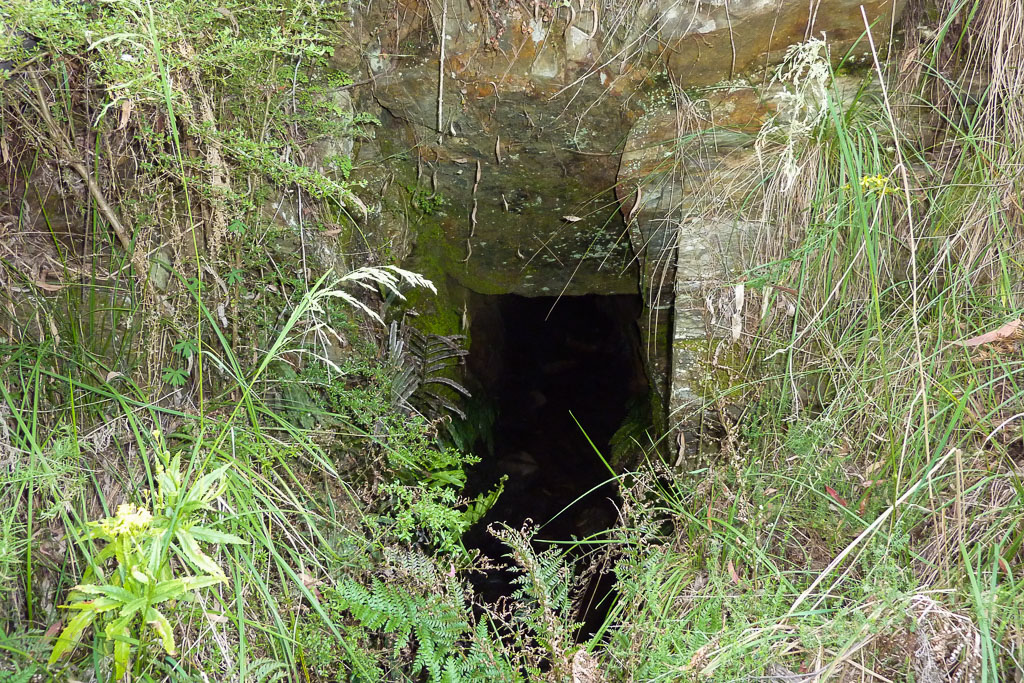 I finally reached Harrietville and trudged back to my car. My word I was glad to unlock it and sit down whilst the words, “Sock it to me biscuit” from Frankie were in my ear. I always leave plenty of water in the car for occasions like this, so I went berserk drinking.

Checking the GPS for the two day, it told me the total distanc was 36.21 kilometres with total elevation climbed being 1561 metres. This day alone was 25.92 kilometres long, so it was quite a solid walk. My legs felt like cement and now I had the 400 kilometres to drive to get home. The idea of sneaking home on the Saturday seemed a good idea beforehand, but it ended up being a struggle. On the return drive, I had to stop on the side of the road for a snooze, as I was knackered… 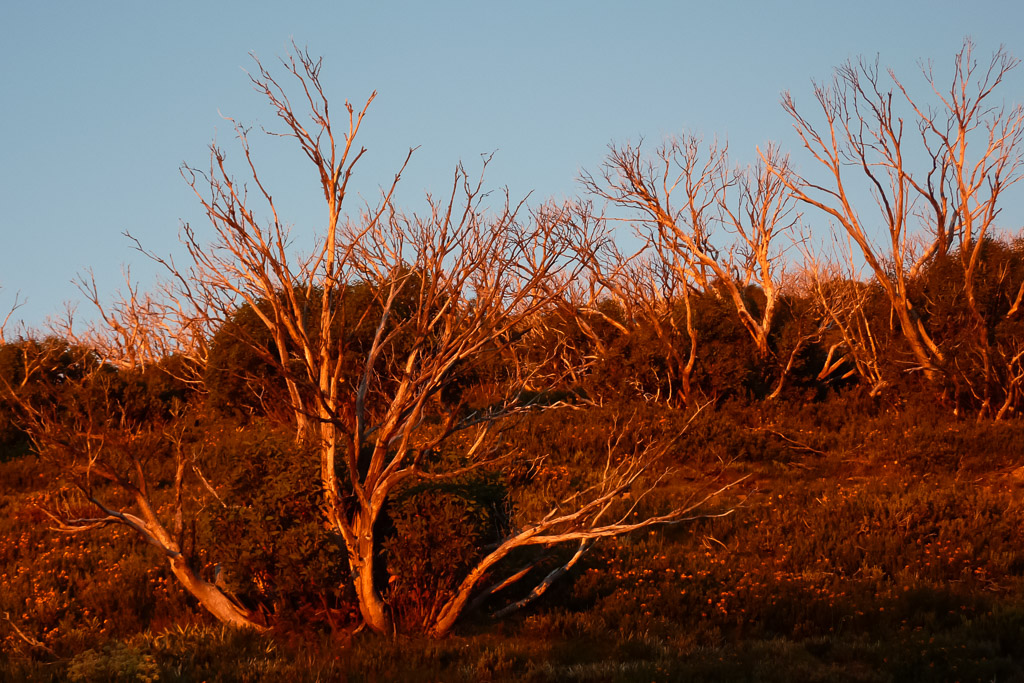