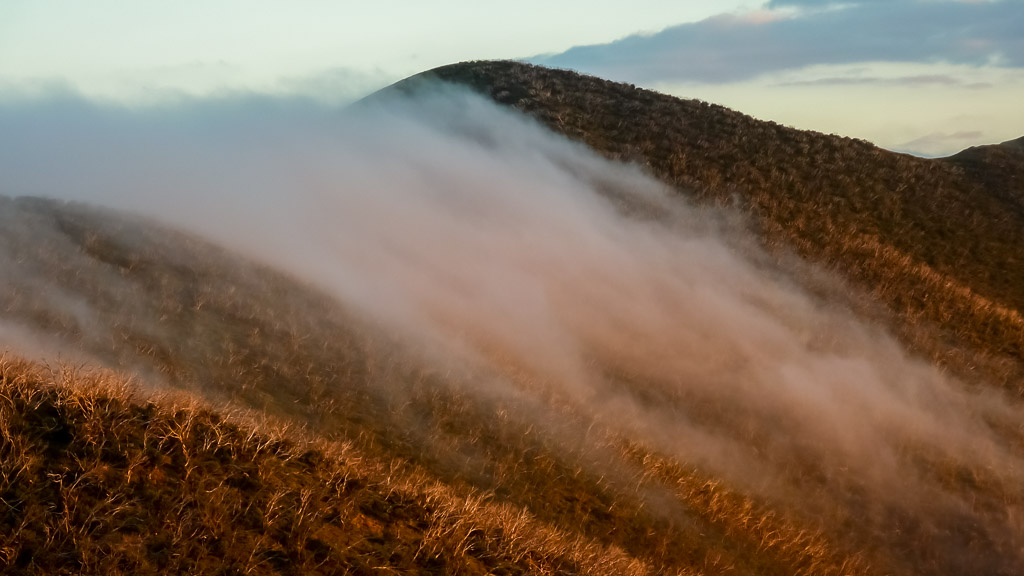 Okay, I’m scratching my head a little as I tackle this retro post. Luckily I’m writing this now, because if I left it any longer I’d have no idea what happened. It would be one of those, “I climbed a big hill and then walked down” type of blog entries. I’m sorry to say, but I’m giving the reader some work to do, by tackling something from two years ago, mixed in with the odd event from the past week. This isn’t exactly Ulysses, so hopefully you can keep up with me.

I think I need to warm up my fingers before getting into the topic of this post. How about starting with this statement? There are a lot of oddballs in the world. Quite a revelation, don’t you think? Let me explain.

I went to the supermarket earlier and waddled over to the checkout with a ton of stuff. I should have got a trolley, but I thought I’d incorporate a bit of urban training. You know, flame the triceps by insanely overloading the small basket technique. It’s might sound a bit weird, but not really. Wait until you see me in the meat section, blasting the biceps by doing curls with the legs of lamb.

Anyway, the register was without a queue and I was feeling mildly excited, as I dropped my basket down and attempted to empty it pronto for the cash register person. I’m not a plastic bag man, so I had my green, recyclable bags at the ready for filling. The person looked up and down my goods and then said, “You don’t do the shopping very often do you?” Okay, where’s this heading?

Seeing how I live on my own, I was thinking I generally practise shopping a fair bit. Do I look like one of those blokes who lies on his back all day, getting fed grapes by a plethora of hot women? Intrigued, I asked what this meant. The reply was, “You’ve put the bread down first to get scanned and packed before the tins. The bread will get squashed. You don’t do the shopping very often do you?” Yeah, okay, I heard you the first time. Who is person? A member of Bread Squad? Should I have been thankful for a free insult? I didn’t realise I’d committed an offence under the Shopping Bag Act (Sub Section – Soft Bread)? Oh well, now I’ve got that out of the way and I’m warmed up, we can move onto the mountain climbing business. 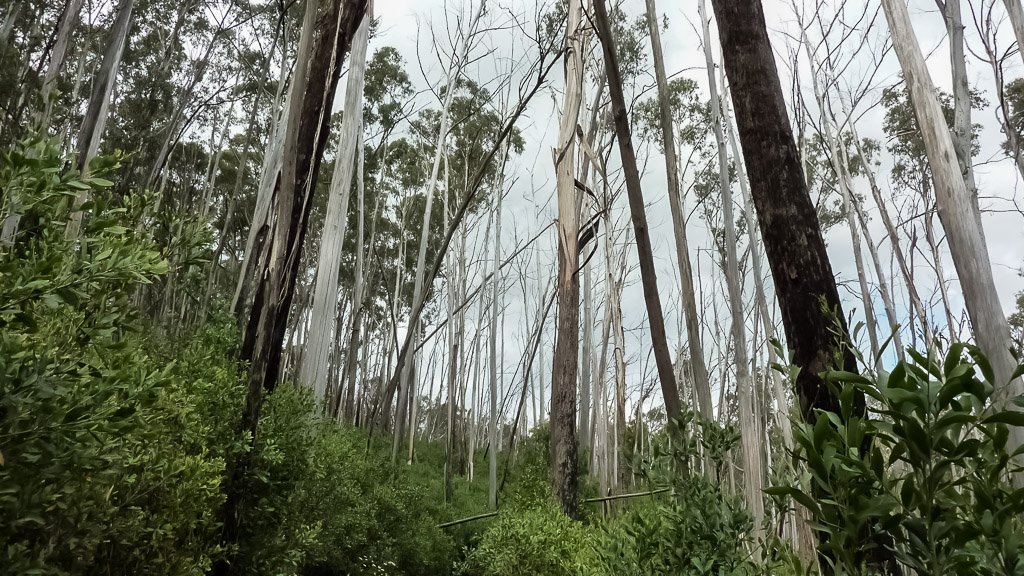 I was heading to an alpine area overnight, so I had to to take into account any sudden changes of weather. The forecast was for generally cool, summer conditions, but with a possibility of rain and storms. This meant packing some wet weather gear as well. For an overnight hike I seemed to have a fair bit of weight in the pack, but I didn’t want to get caught out in case crap weather hit.

I was aiming for Mt Feathertop, but before that I’d head to Federation Hut via Bungalow Spur, which would be a 10 km climb from Harrietville. I’d spend the night at the hut and then climb Mt Feathertop the following day. I was going to be starting later in the day than I’d prefer, but there was a valid reason for doing so. It was Christmas Day.

In the morning, I started out with a trip to dish out presents to Ben and stand around saying “Ho Ho” quite a bit. If I’d written this entry sooner, I’d be able to remember what the ‘gift of the day’ was, but alas I’ve no idea.

At 10.30 am I was back in the car powering up the Hume Highway to Harrietville. It’s one of the most boring road trips in existence, so I was hoping it wouldn’t go too slowly. I did have one major problem. One of my Christmas gifts was a monstrous ‘Toblerone’. During the drive, I noticed it on the front seat just staring at me. I think it was goading me to eat it.

I was up for a challenge, plus I felt mind numbingly bored, so I lay into its massive size. Once started though, I couldn’t stop inhaling it for the entire drive. I knew the lead weight of chocolate might affect me later, but I kept stuffing it in my gob.

Upon arriving at Harrietville, I drove to the base of Bungalow Spur. Hopping out, I then realised I was covered in kilos of chocolate, which had missed my mouth, not to mention numerous pieces of tin foil wrapping. It was quite a sight.

I sauntered over to the ‘walker’s intentions’ book, which sits at the start of the track, feeling confident there would be no names on the current day. Well, with an attitude like that, I was always going to be wrong and of course I was. In the book there was listed a group of 10 people who’d headed up the spur a few hours earlier. Ten? Huh? Who are these lunatics walking in a school sized group on Christmas Day? I thought I was the only nutty Christmas Day hiker?! Another couple had also gone up the same way earlier, so it suddenly felt like it was rush hour. Oh well, on with the pack and I was off. 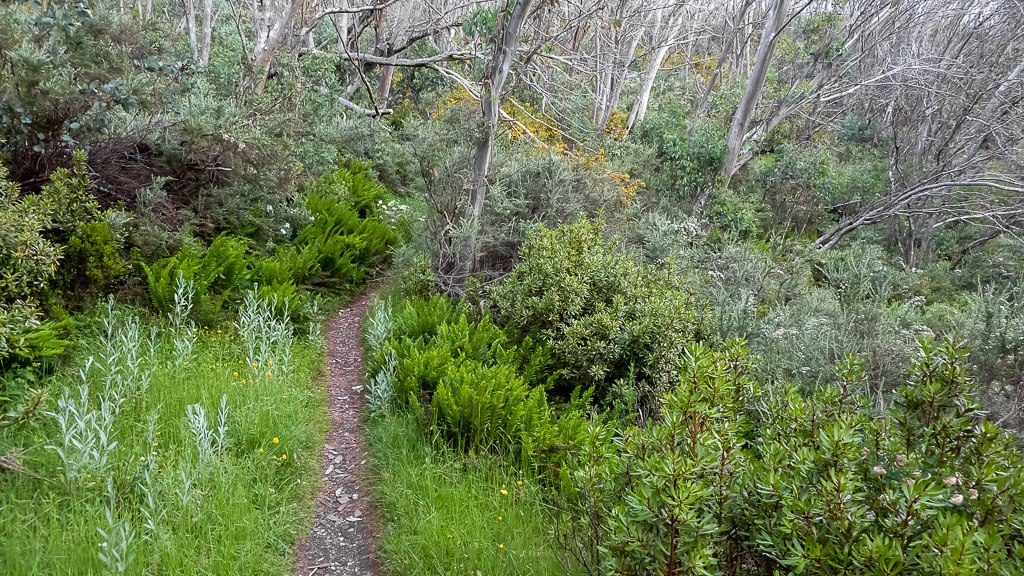 Ahead of me lay a solid walk, which I had to do before dark. Bungalow Spur to Federation Hut is 10 km, but there’s 1000 metres of elevation gained over that distance. It’s solid walking with the path constantly climbing, but nothing too vertical to worry about.

Then again, I had a guts full of Toblerone. After a long drive and my blood sugar level popping off the Richter Scale, I was trudging a fair bit. The spur was quite straight forward, but it began to get more interesting as I got higher. The trees with their stark white branches were intriguing and even more so to see them all pointing in one direction, as if they had endured the Tunguska Blast. 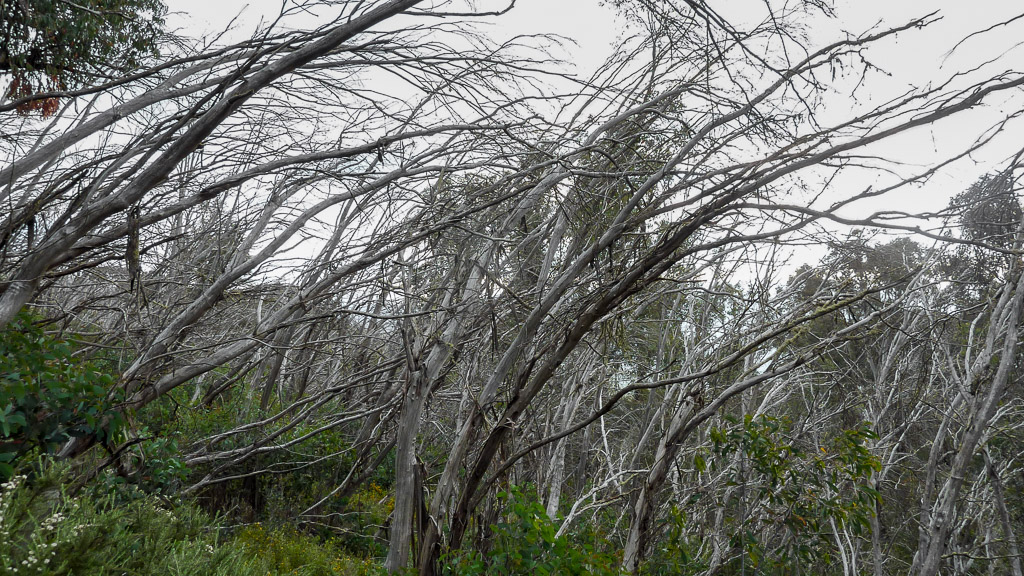 I’d passed a couple of landmarks on the way up, called ‘Picture Point’ and ‘Tobias Gap’. These spots were once lookouts, but there’s not much to see now, as the vegetation has closed in. I kept wallowing on looking for the next port of call, being the ‘Old Feathertop Hut Site’. This is an old hut, long demolished, but the surrounding area is quite open for camping if one doesn’t want to go any further. Federation Hut is another kilometre uphill from this spot. As I approached this area I started to hear a lot of voices. 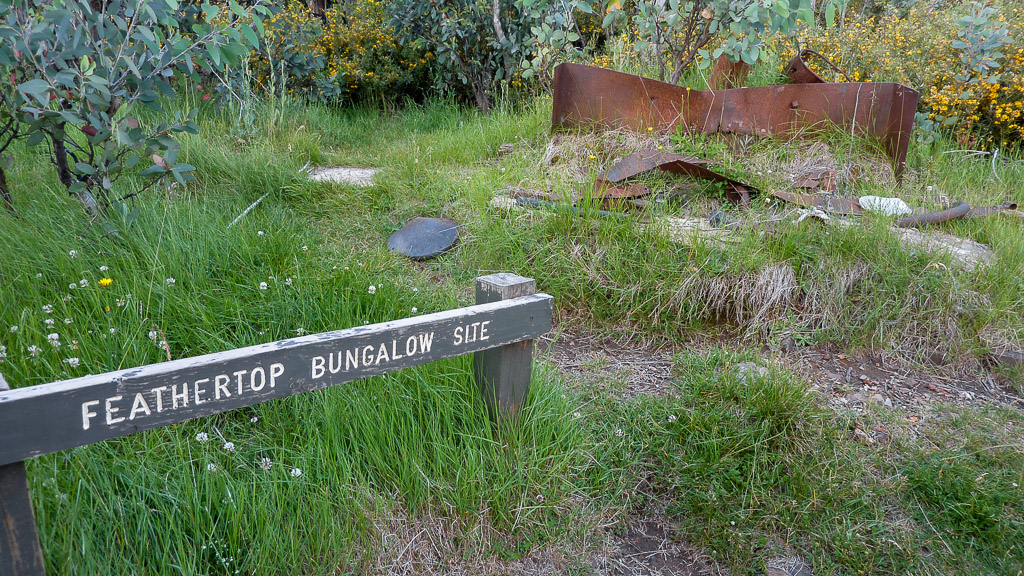 I had reached the monster group of walkers. They were everywhere putting up tents and sitting around a big fire. I always feel uneasy about people starting fires in the alpine area, seeing how the area was incinerated in 2003. Why do people have to have a fire at night in summer?

I was also surprised to see them, as I assumed they’d be at Federation Hut. I must say though, I wasn’t complaining. Stopping briefly to fill up my water bottles at a spring nearby, I had a quick conversation with one of the blokes.

I mentioned how I didn’t expect to see anyone else hiking on Christmas Day and he replied, “We don’t celebrate Christmas.” He stopped speaking and looked at me as if I was going to ask why this was the case, but I called his bluff by replying, “No worries!” Complete with a verbal exclamation mark. Then walked off. They were call clean-cut, so I doubt whether it was the rarely seen Satanists Hiking Group (SHG), but one never knows.

I was feeling absolutely stuffed, as I continued on and covered the last kilometre, before Federation Hut loomed into view. Dumping the pack, I looked around and was surprised to find no one else there. I’d expected the couple whose names were in the intentions book would be at the hut. They were nowhere to be seen, so I had the entire site to myself. It was perfect weather, as the light began to fade and clouds drifted through nearby trees… 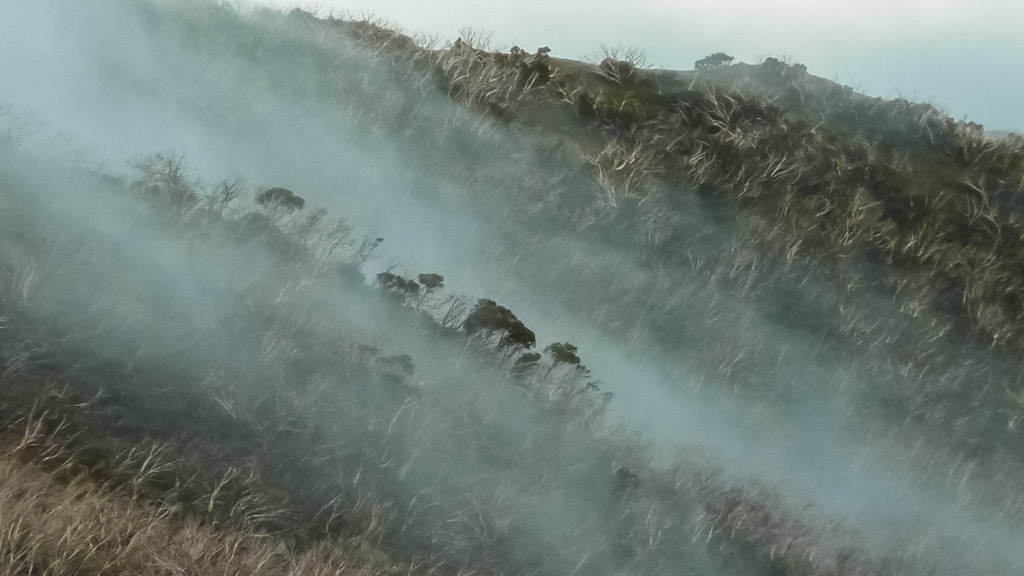 …before the setting sun lit up the surrounding landscape. 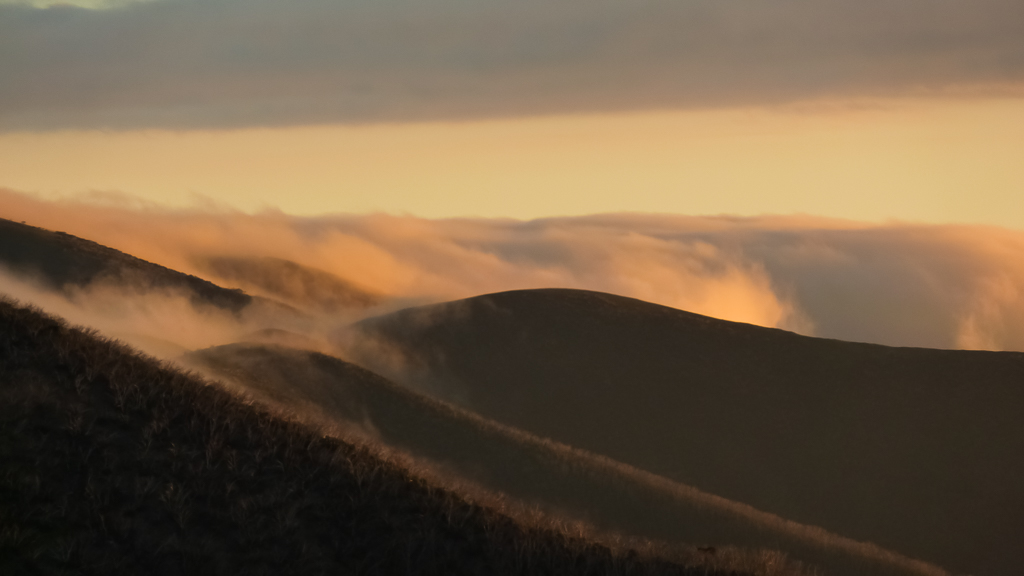 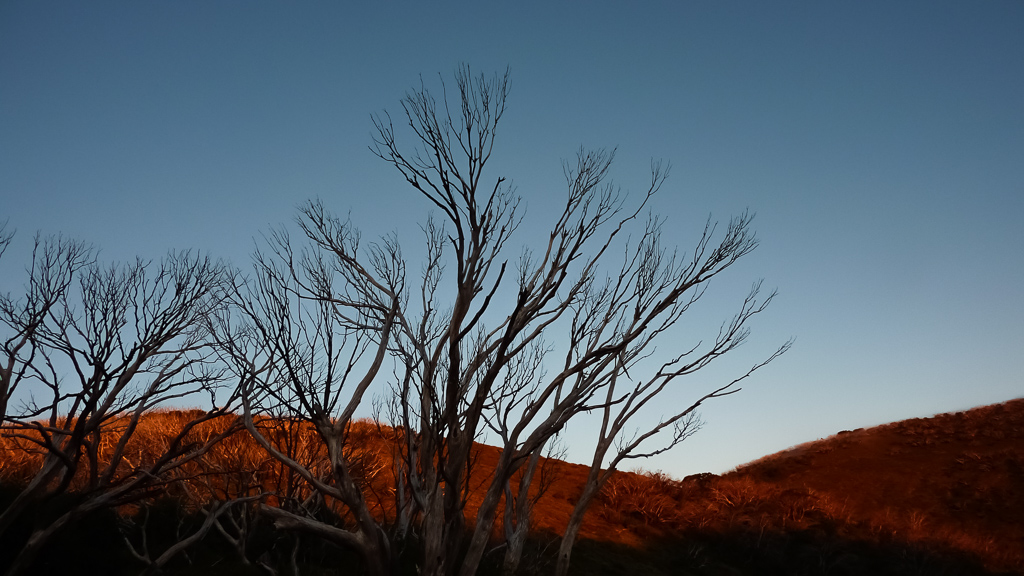 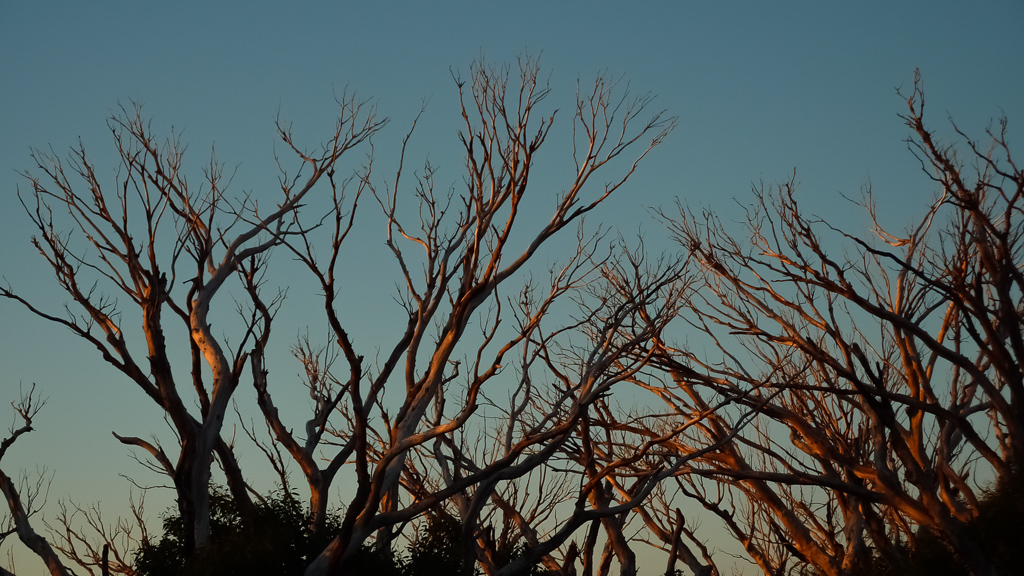 As sky darkened, I retired to the hut. There are signs around, telling hikers not to sleep inside. As I had the place to myself, I figured it wouldn’t happen too often, so felt like I could indulge. It was time to retire for the evening with the iPod and Kraftwerk was the perfect music for the tranquil environment. 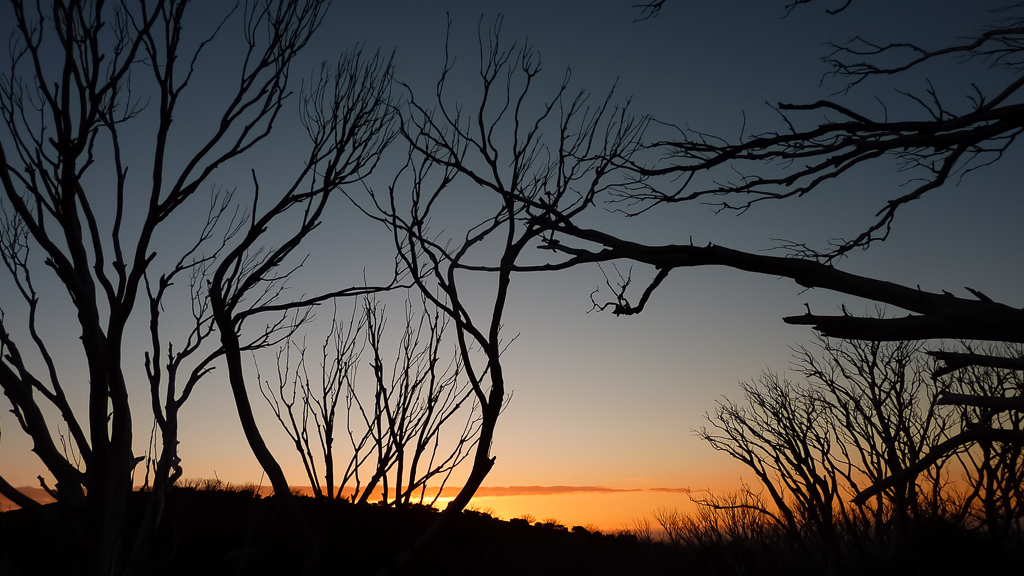