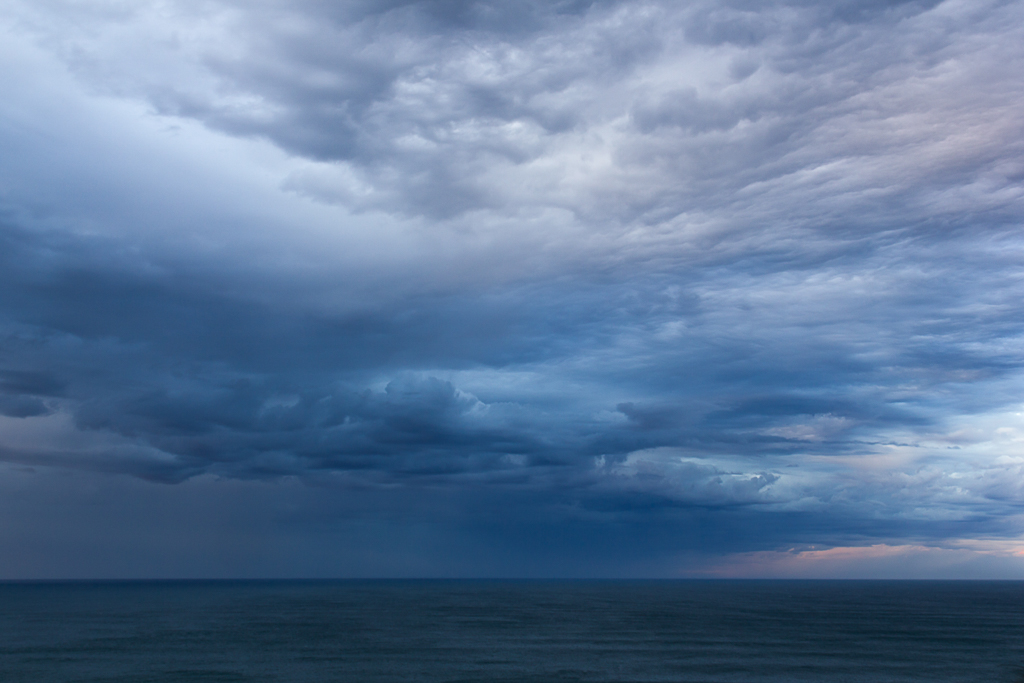 Okay, here we are. Final thoughts. Great Ocean Walk. At last, a bit of a wrap-up, where I’ll share some impressions of the autumn tilt at this 100 km Victorian coastal walk. I completed it for the third time this year. I’ve already written an overview from my last trip back in 2010, so why am I doing it again? Well, I thought it might make sense to tie up some loose ends, which may have been missed in the posts.

The thing is, did I want to write a post with advice or maybe some general waffle about nothing, other than how did working week go by so slowly? In the end, I thought I’d throw together a bit of a comparison between then and now. You might get a couple of tips, but then again, I wouldn’t follow them if I was you. You’d probably end up falling off a cliff or finding yourself knotted up in a fishnet singlet, which is my usual hiking attire.

Oh yeah, as my previous blurb from 2010 was a lot less bombastic, the posts tended to be shorter with only a handful of photos. Just to keep you on your toes, I’ve elected to throw the baby out of the apple-cart and feature pictures taken from four years ago. I figured you’d never seen them before anyway and as they’re taken from the same joint, they can’t do much harm. Unless you’re afraid of spiders.

Where do I start? That’s pretty easy, as the walk is getting better. It always seemed to be held back by three elongated inland sections. Elliot Ridge to Blanket Bay, Johanna Beach to Ryans Den and Devils Kitchen to Twelve Apostles. Ah, but you can cross the last one off the list, as the stretch from Devils Kitchen is now lovely walking, with not a hint of the fearsomely hideous Old Coach Road to be seen.

On my map there are mentions of possible realignments in the other sections, so one can keep their fingers crossed. Actually, what about the maps? I have the official Parks Victoria/Meridian, Great Ocean Walk maps from the first edition in 2010 and the third edition from 2012. Lo and behold, between the two, there are some weird things going on.

Have a look at this. I assume a risk assessment regarding liability has trawled through in detail and the results are as follows. My most enjoyable part of the hike was from Blanket Bay to Cape Otway, whilst walking the open rocks. Here’s the 2010 map for this section. 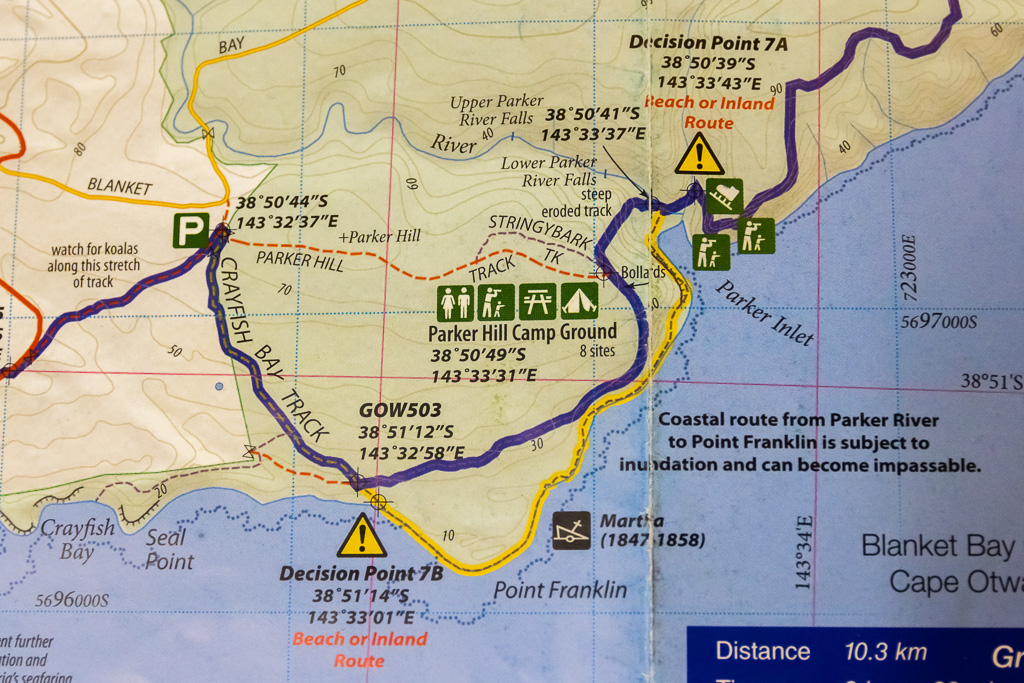 Mm… No worries, there’s a decision point where you can decide to head up over the cliffs or along the rocks. The current map is a little different. Here it is… 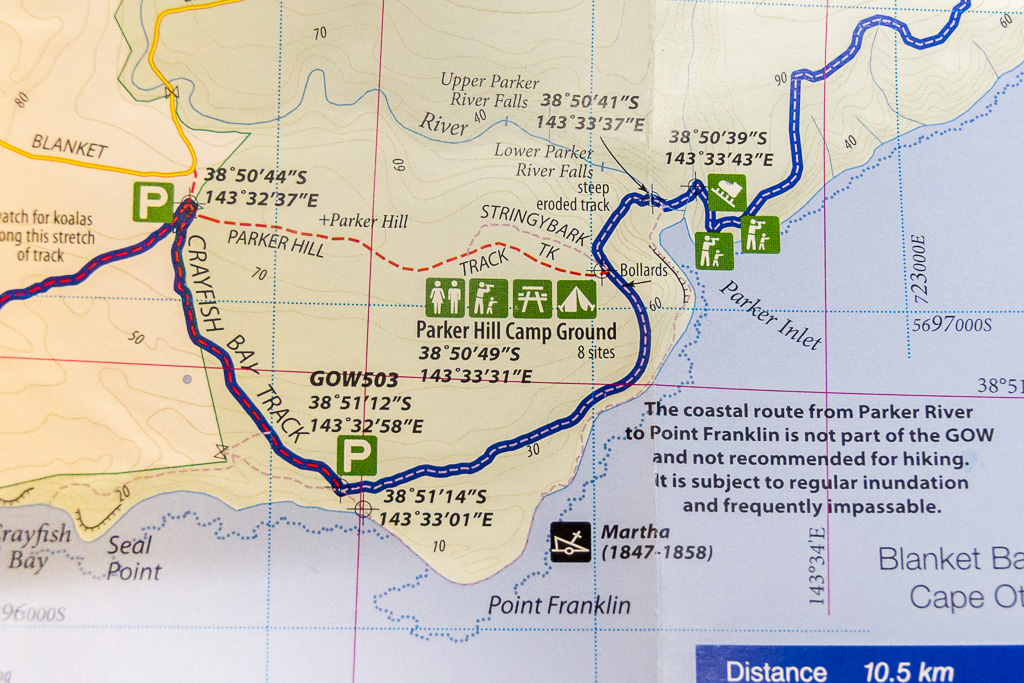 Ah, I see. They’ve flat out said it’s not part of the GOW at all. Let it be said, if the tide is low, to hell with their suggestion about it not being part of the GOW. Bloody hell, there’s bits of a shipwreck to look at. Anyway, there’s another thing about the maps, which is strange.

All along the walk there are numbered decision points. Large posts with a spiel of a sign explaining what’s to come. Well, as you can see on the old map, the decision point is included. 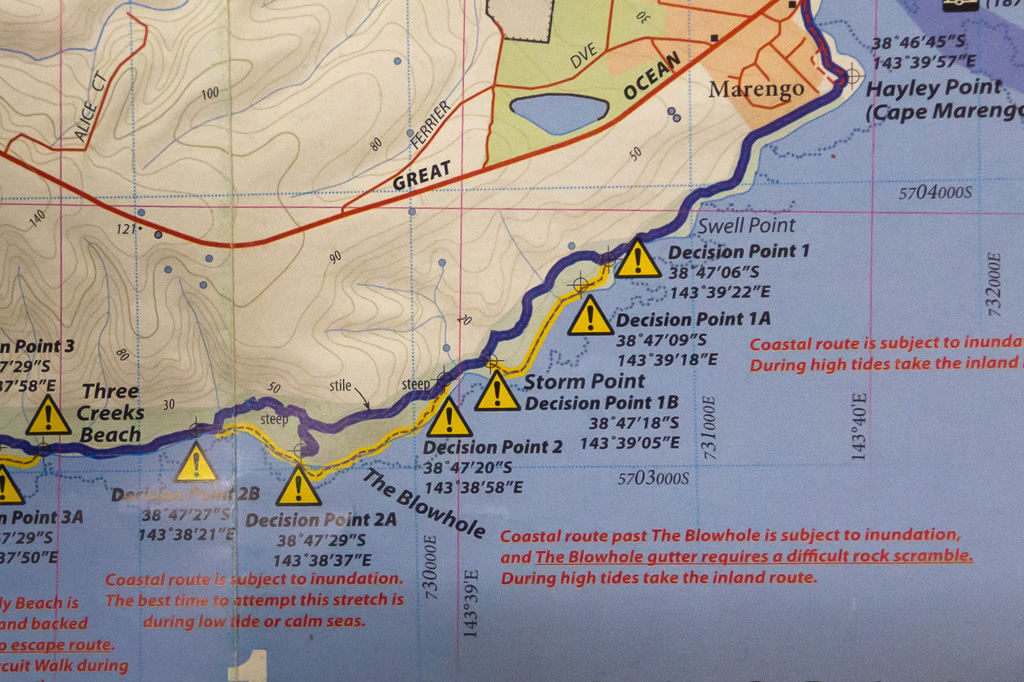 So what’s going on with the new map? I’ll tell you what. They’ve got rid of them. I only found this out after standing under a sign and wondering where it was on the map. I thought it was early senility brought on by a mate head-butting me by accident in a Townsville discothèque in 1984, leaving me semi-concious whilst the music didn’t stop and people grooved around me whilst I was lying on the floor. I think ‘Purple Rain’ was being played at the time? Definitely the song to listen to whilst your eyes are glazed from a head injury.

Luckily though, my Troop Sergeant was there and in his eagerness to awaken and bring me back to life, applied a hose to my face. Unfortunately, due to a combination of being extremely dumb and mild alcohol poisoning, the hose he used was designed for fire fighting and the resultant water pressure lifted my head off my shoulders, spun it around a number of times before he realised he was’t fighting the Chicago Fire, but trying to help out a fellow digger. Yeah, that was the occasion which came back to me as I was standing under the GOW sign, wondering where it went on the map. 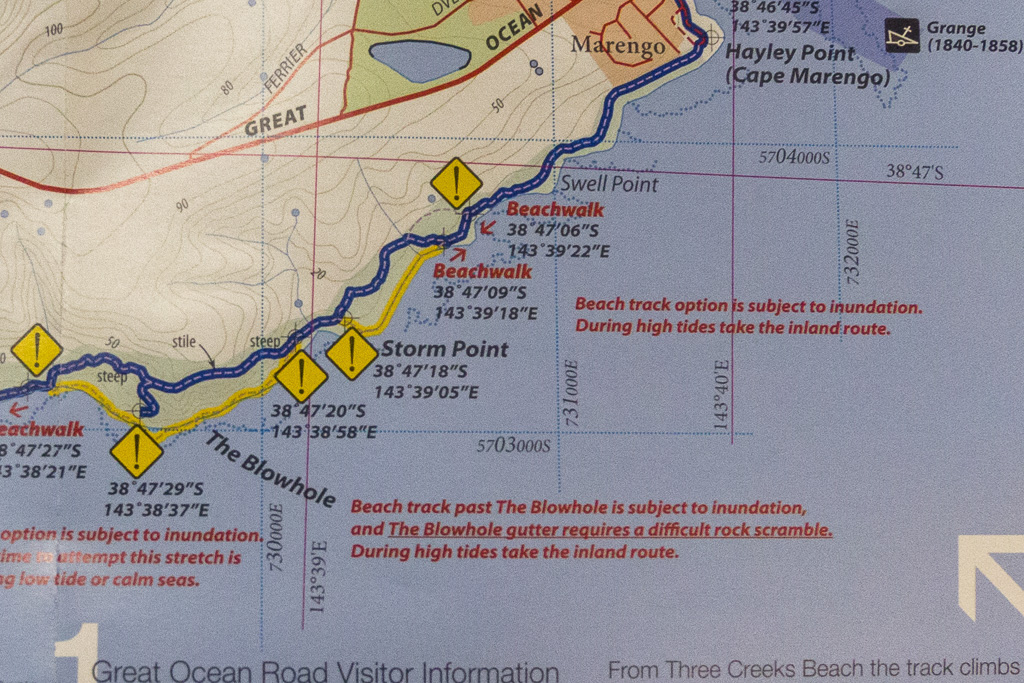 So, I think we’re happy to conclude the maps have been rejigged over the past couple of years. My only hunch (and it’s based on absolutely nothing) is the numbered points might get the flick and instead, there will be a sign, rather than some pole action.

Wrapping up the maps, I can honestly say you can survive without one. The track is so clearly marked, a map isn’t needed for navigation. It would come in handy though if you wanted to bail out somewhere and hightail it to the nearest road. Oh, another reason is maybe you forgot your book and need some reading material?

What other differences did I notice between trips? In each shelter there used to be a walkers intention book. Well, they’ve got the arse. It’s a pity, as they had some handy reading material once I’d finished perusing the map each night. The books always delivered a surprise, such as this one at Eliot Ridge… 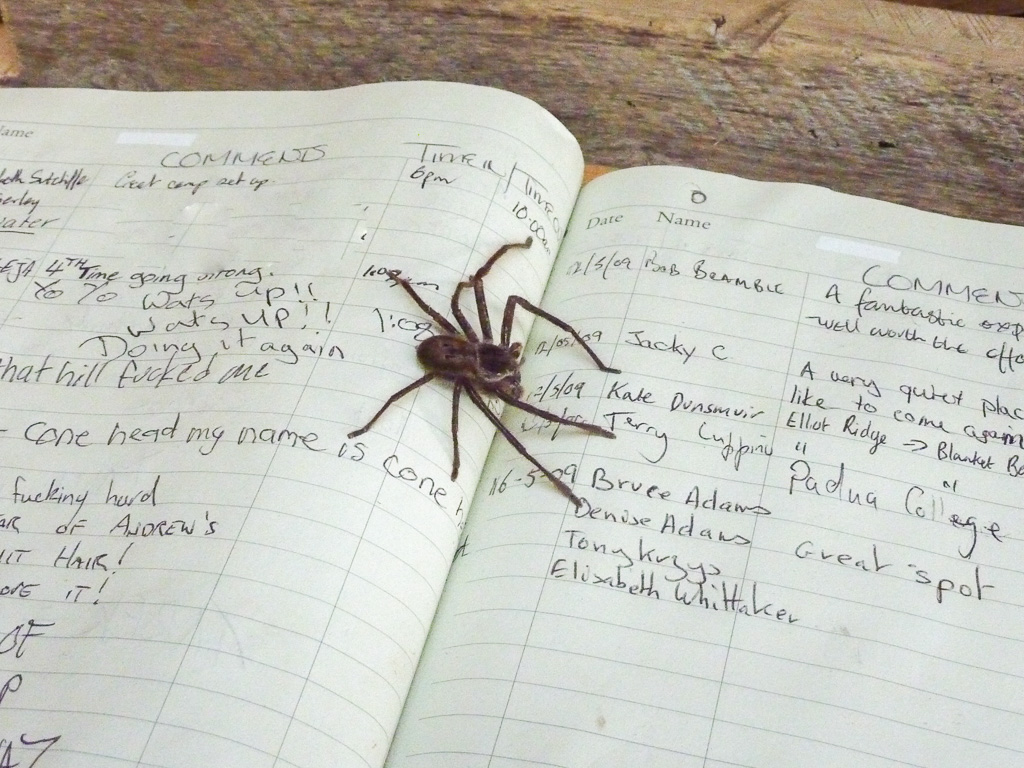 …and scribbles of wisdom, like this at Johanna Beach… 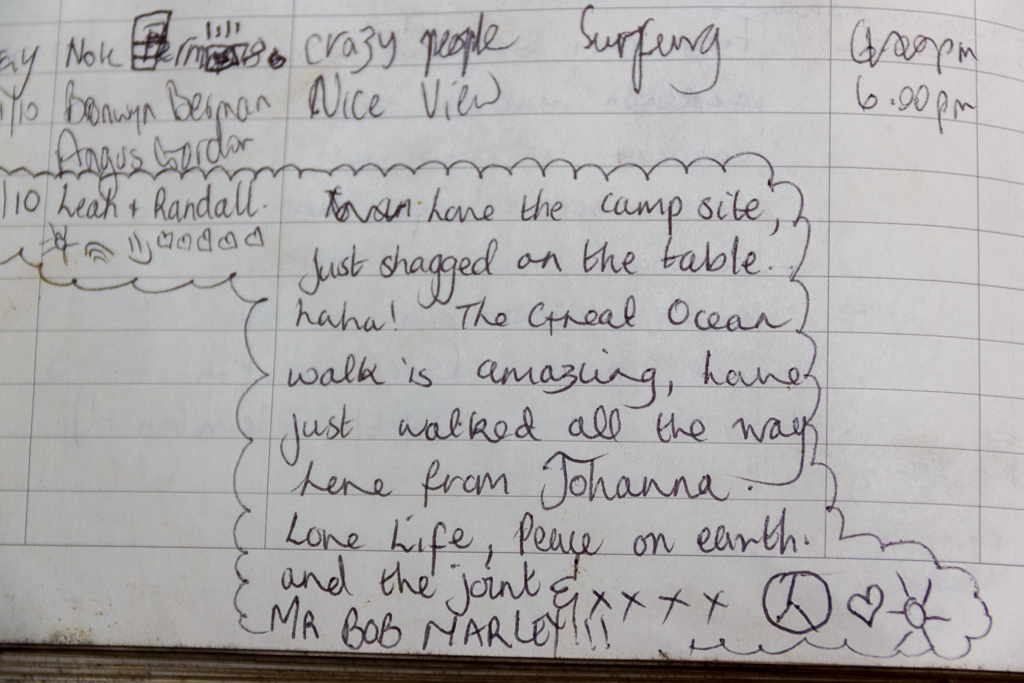 …and there I was thinking it was dried milk on the table.

Actually, the books aren’t a great loss, as they were filled with crap and are a magnet for toolish behaviour. Ripped out pages and notations such as, ‘there are hills’, are not really going to rival Ulysses as the pinnacle of literature.

Okay, what else? Oh yeah, this one bothered me. On my last trip around Cape Otway, I was deluged by koalas. There were millions of them (at least a dozen). Remember these ones… 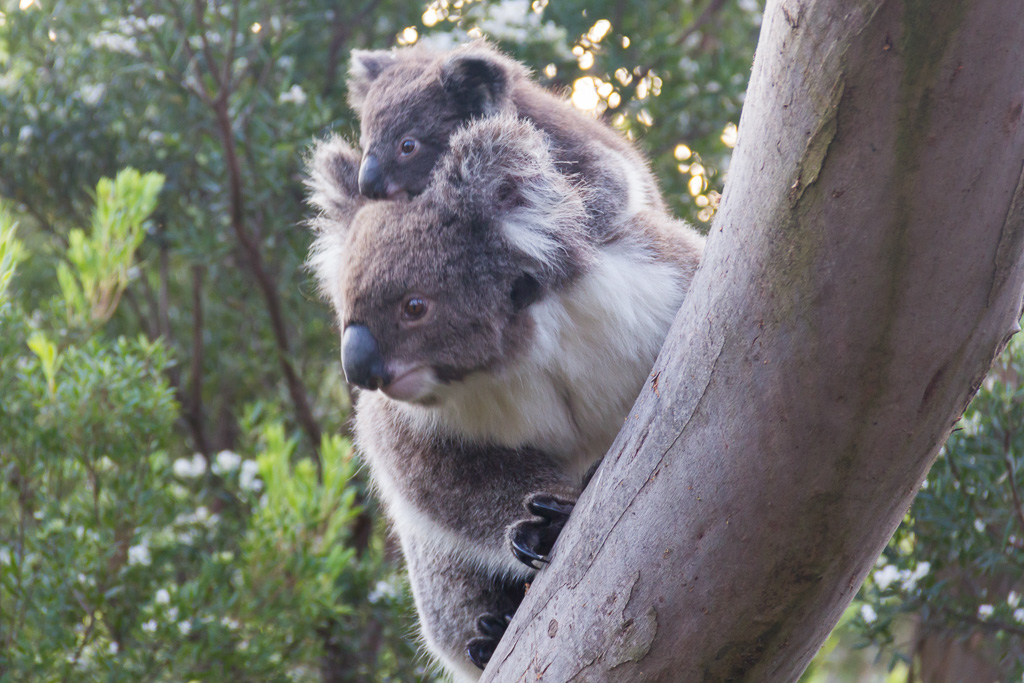 …pottering around the Cape Otway campsite? 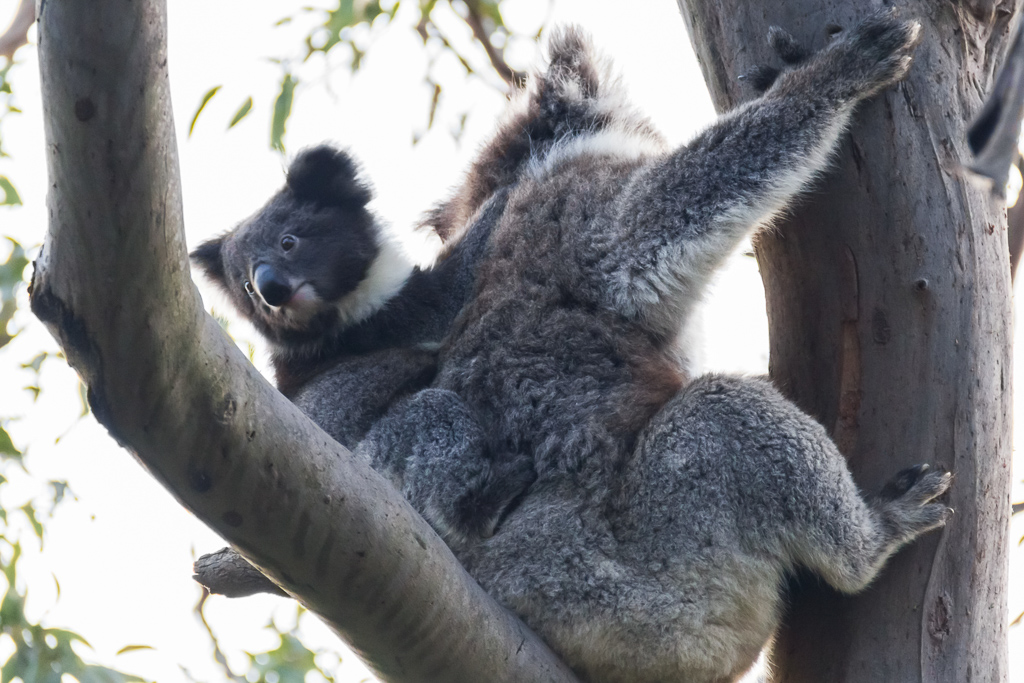 Well, there were none to be seen on this trip and a number of trees around the campsite were unrecognisable. The furry blighters appear to have eaten themselves out of house and home. Towering, leafy eucalypt trees were stripped bare and if I didn’t know better, they appeared to be dead. It was a shame, as this was the most Australiana place I’d ever slept in. Total koala count for 2014? None.

Next? I read somewhere on the trip there’s a potential for the track to be extended to Port Campbell. If this is the case, hallelujah, as it solves a problem I had since first contemplating the hike. Right now, the finish line is a bus stop on the side of the Great Ocean Road. There you are, after a weeks walk, stuck on the side of the road like a hobo.

Yes, the aim is the Twelve Apostles and approaching them is quite spectacular. As long as you’re prepared for what seems to be Richtofen’s Flying Circus buzzing overhead. I had no idea those god-damned Apostles attracted such a crowd.

You can’t leave a car at the finish line for the week, as there’s no parking allocated for such a thing, so if you’re without a lift, you’ve got to rely on the bus, which only runs three days a week. That’s one reason on the previous trips I cut it a little short, by bailing out at Princetown.

Ah yes, but if only the track continued a measly 12 more kilometres, you’d find yourself in Port Campbell with accommodation and chicken parmigiana’s within reach. This could also create the potential for the…. wait for it… walk the other direction possibility.

As it stands you can only go east to west. Obviously this has been determined by the grand finish. The thing is, if you’re going for a coastal walk in Victoria, the prevailing wind is a westerly, so if the weather is nuts, you’ll have it in your face. There’s a reason I walked Croajingolong and the Great South West Walk in the other direction. I didn’t want my face shredded by sand and wind if the weather turned apocalyptic.

I know what you’re thinking though. I’ve even considered it myself. The one thing the GOW doesn’t have compared to the other walks I just mentioned and that’s long sections of beach walking. If you abide by the map, you’ll rarely be on the beach, so maybe a fearsome westerly wouldn’t be too horrific? At least you’re not having your delicate features sand-blasted.

Oh, one more thing about this topic. I’ve no idea why, but it’s as if a lot of the signs have been set up, as if you’re walking west to east. Without fail we’d get somewhere and find a sign informing where we’d come from and the distance to our start point. It almost seems the signage was done years ago, before the walk became the GOW and the ‘you can only walk east to west’ business started. Again, it’s only an observation and really, you won’t lose sleep over it. I did, as it just took me 10 minutes to write this crap.

Waffling on is easy, but I should finish up. I don’t care what anyone says, I still love this walk and if they continue to realign parts or even lengthen it, I might give myself a chinese-burn and do it again. It’s a nice way to spend a week along a pretty interesting section of coastline, which is what the whole place is about.

Step back from the walking caper and remember you’re walking amongst the departed. Although the Shipwreck Coast was relentless in its toll on mariners in the 1800’s, even to this day, its brutal waters don’t give up the dead. One only has to observe the graves… 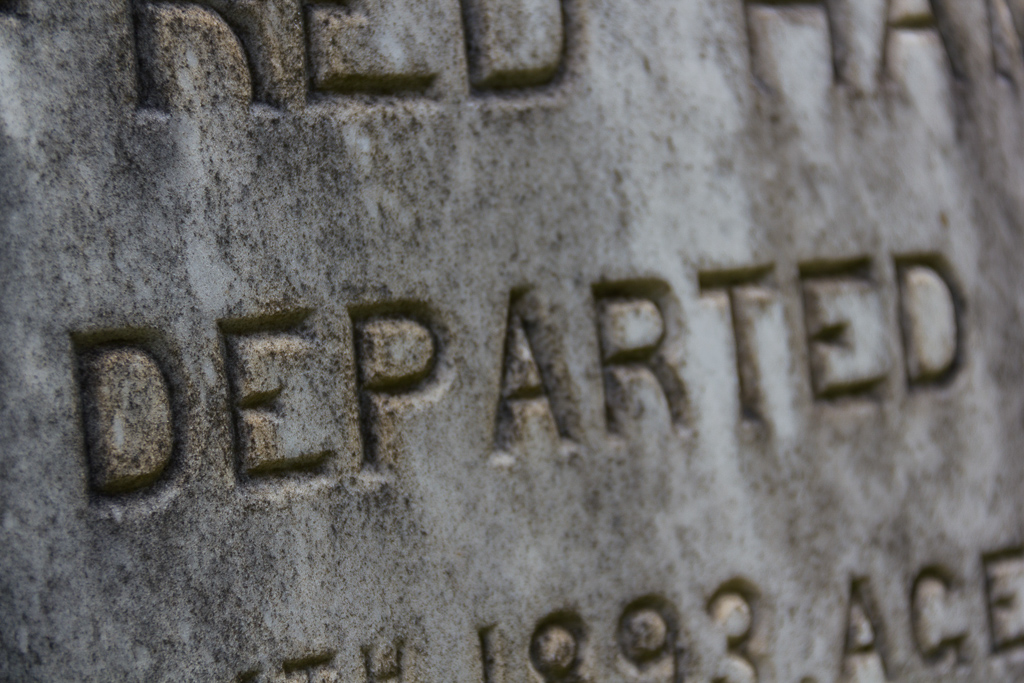 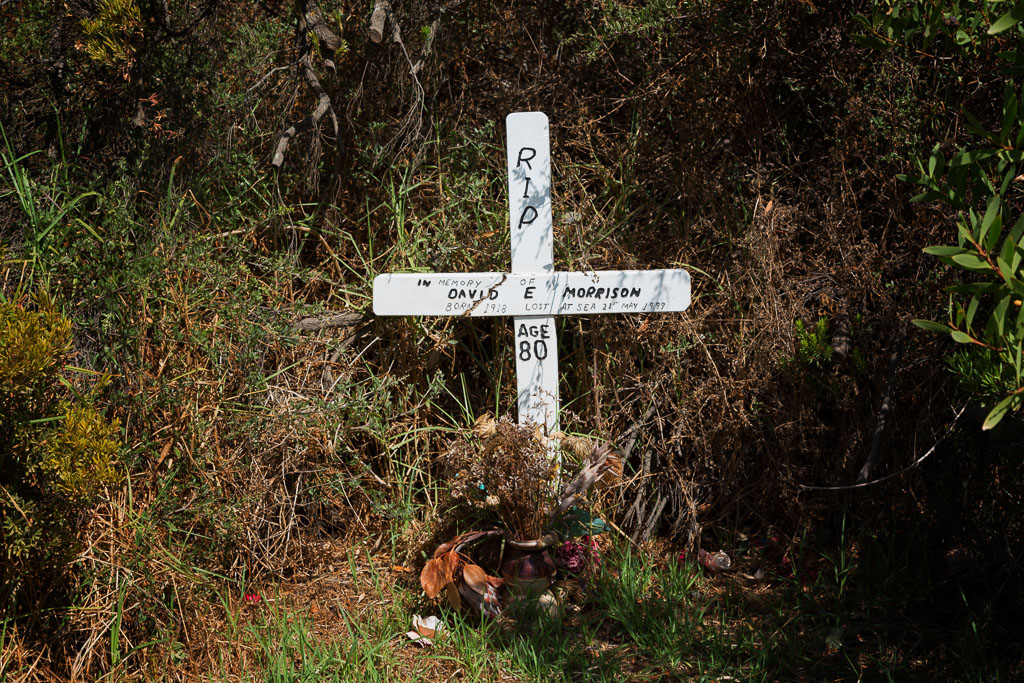 …to bring home the tragedy which exists along here. It’s not even the dark green, churning water, which has indifference to people who venture into it. One only has to look behind the guard rail where the Great Ocean Road meets the Great Ocean Walk to see it’s not just the sea that can be lethal. 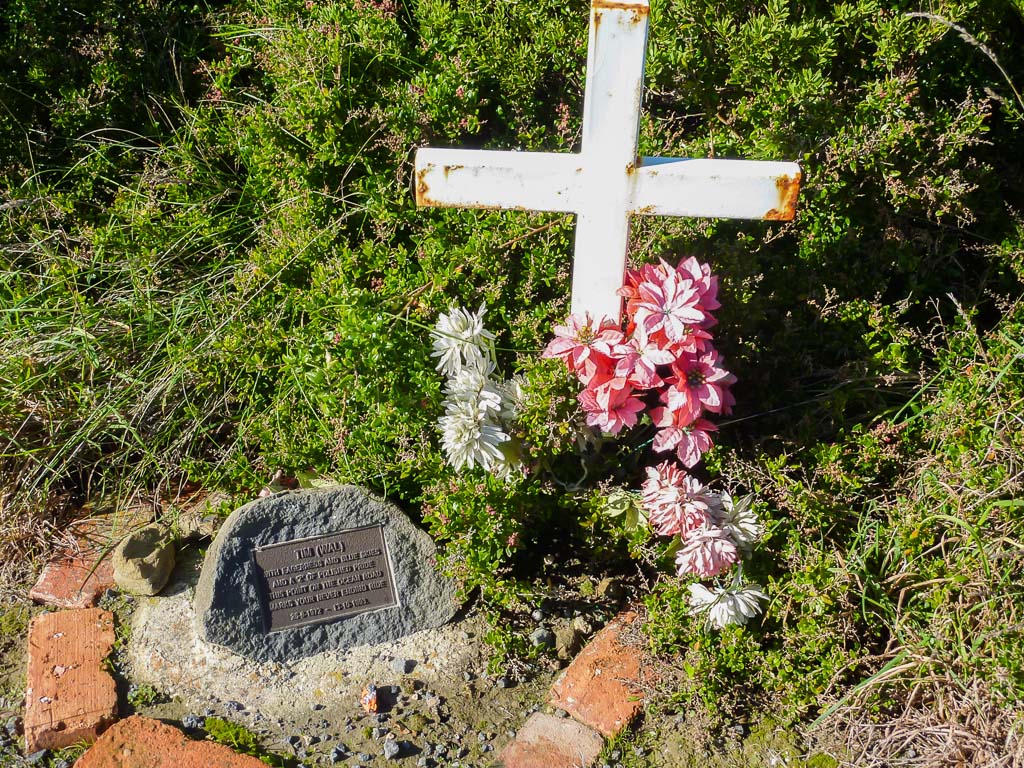 Is there anything else? Probably, but it’s Friday night and after a week in the slaveship, I’m done. Best I hit publish and walk away.

Finalising with a few photos will be the perfect swansong. I forgot to mention Wreck Beach. It’s certainly worth the ear-popping descent from cliff top to the sand and not just to see the shipwreck anchors. On the cliff face, water was oozing out across the rocks, creating quite a colourful sight. 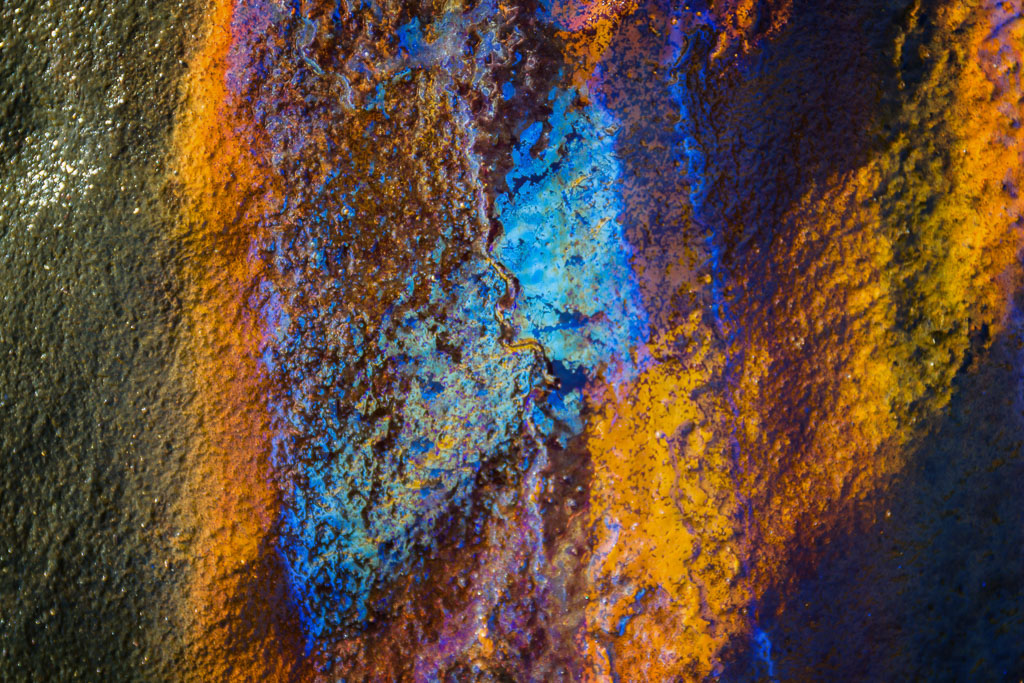 Anyway, that’s it. One thing I missed out on this trip was a decent sunset. I was lucky a few years ago with this one at Ryans Den… 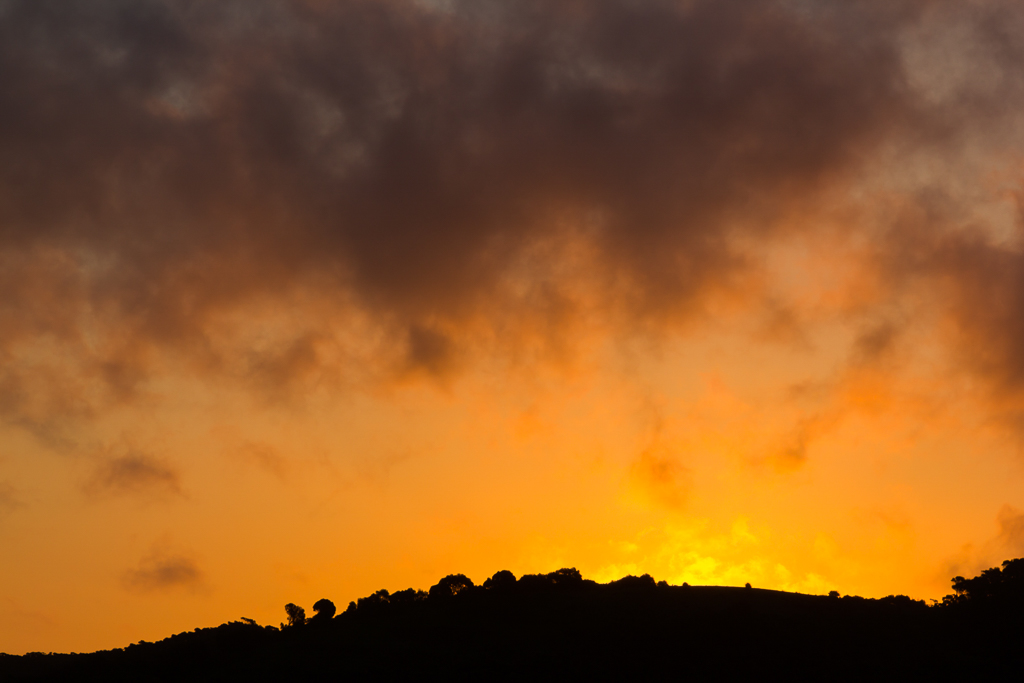 …and remember, if it’s winter and you’ve got a nice sunset at the Twelve Apostles, stand fast in the encroaching icy conditions, as you’re sure to see a good one.

NB – 10/4/14: It’s only just occurred to me I should provide a link where you can find all my posts about this trip on the one page. Navigation on a blog can always be a bit tricky, but I think is the best solution. My opening post regarding this walk has a link for each particular day. As this is the last post about the GOW, I guess it makes sense to link back to it in case this is where you come to first!

Anyway, if none of this makes any sense, head to this link titled ‘Great Ocean Walk, Victoria. March 2014’ and I’m sure it’ll be a bit clearer…