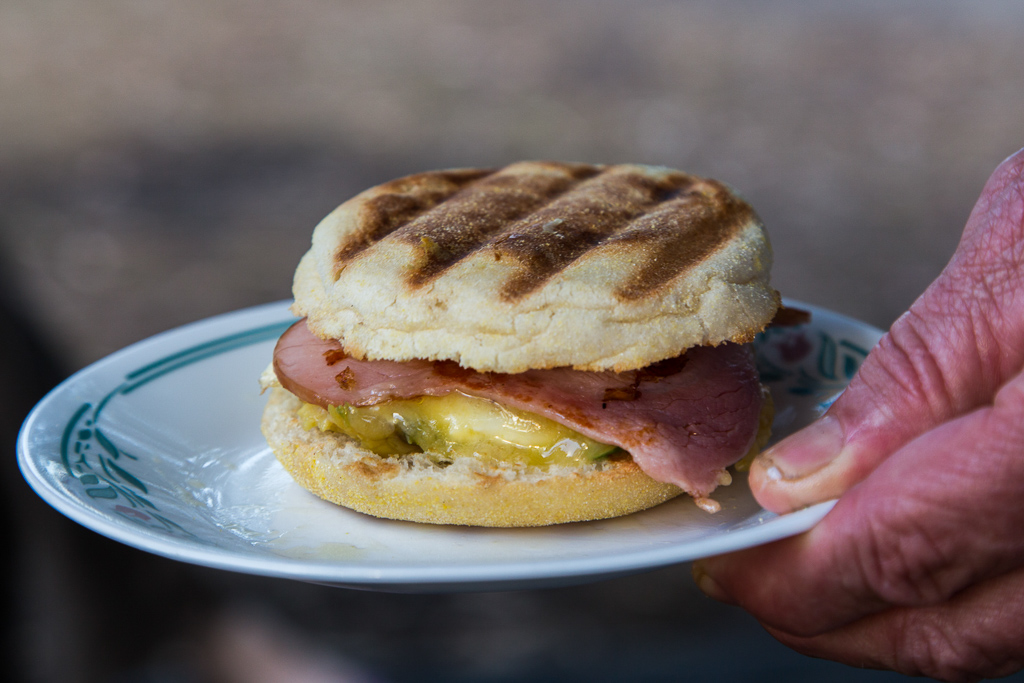 As you’re well-aware, I’ve just completed the Great Ocean Walk for the umpteenth time. Last week I wrote the intro and you may have assumed I’d begin describing the hike from the first day. Unfortunately for you, that’s not how it works in this joint. What you’re actually going to get is every piece of crap I can think of which happened during the week. Including the day before starting.

I couldn’t really resist though, after witnessing a non-stop freak show that left me with base camp blues. Where do I start? Don’t ask me, I’ve got no idea what was going on and I’m doing the writing.

The start of the hike is in Apollo Bay, so a decision was made to hunker down at Cape Otway, in the designated Smuffin² bunker. His caravan. On my previous visits, I’ve lugged a weeks worth of food in the backpack, but due to my current medical condition of having a detachable head, a new approach was needed. Lady Smuffin volunteered (no Chinese burns were used) to supply food every second day. This made quite a difference in pack-weight, as instead of a heavy load, it felt as if the Aarn had been filled with helium.

So there you go. A simple plan is usually the best one. With a one night stay needed, I elected to stay at the same caravan park. Mind you, not in a tent like some sort of chump. Nope, I decided to live the life of a high-roller by booking a cabin. Not just any cabin either. This beauty was about 26 paces from front door to the porcelain recliner.

That’s not all. This cabin had stunning views out the front. I couldn’t believe how lucky I was to get something so idyllic. It’s unfortunate the picturesque scene created so many flies, but one can’t have it all. 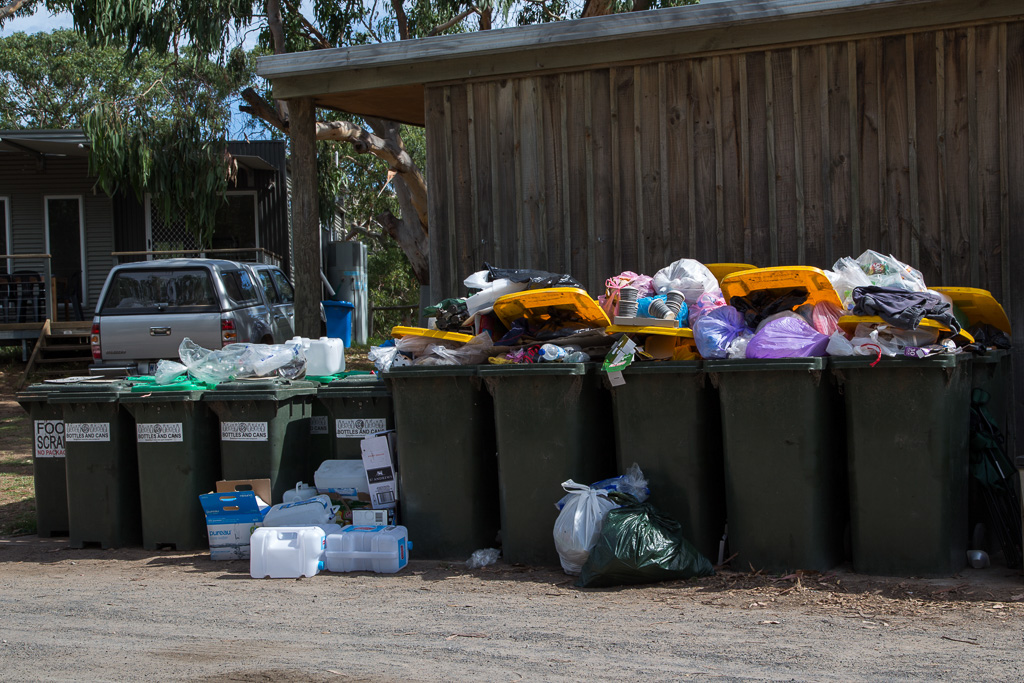 It’s then I discovered the humble fly ardently protects its refuse. After taking the photo above, I was suddenly besieged by the winged devils. Whilst frantically waving my arms like a sensei, I was eventually overcome. Feeling my shirt lifting at the back, as an entire army tried to take me away, there was only one choice. Like an oversized Steven Seagal, complete with random sweating and shit acting ability, I made a dash for the cabin front door and flung myself inside. A mad panic of battening down the hatches ensued, until every door, window, vent and crack in the walls were sealed. Phew. I must say, a close call like that deserved a decent brew.

You couldn’t have believed my elation when I found the cabin was stocked with the very hard to find ‘Exxon Valdez tea’. You won’t find a better tea to lubricate the throat. All it took were a few gulps and its wonderful trademark was clearly visible, staining the cup for the next 30 years. 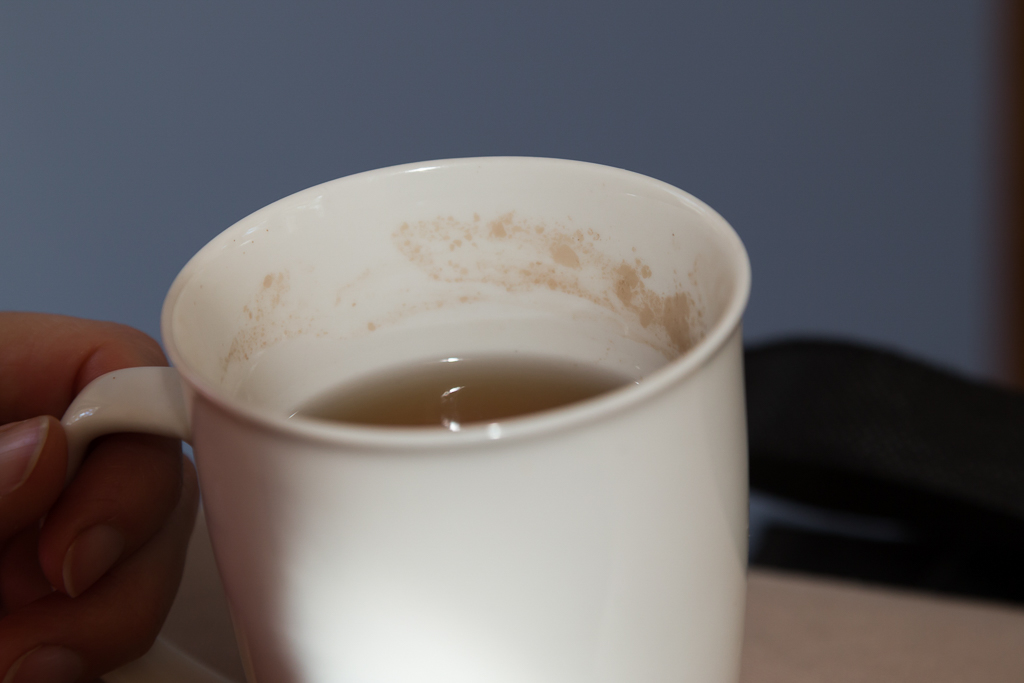 As you can see, it’s all action when you’re around me. At least I was away in the country and it was quite peaceful once I’d settled into my sealed, sarin proof cabin. Until a tractor drove past. I was half-asleep on the couch as the diesel belching beast passed by my window, Maybe I was dreaming, but I swore the tractor had a colorbond roof and was flying an Australian flag? Rubbing my eyes, I wondered why I dream such crap. Intrigued though, I looked outside… 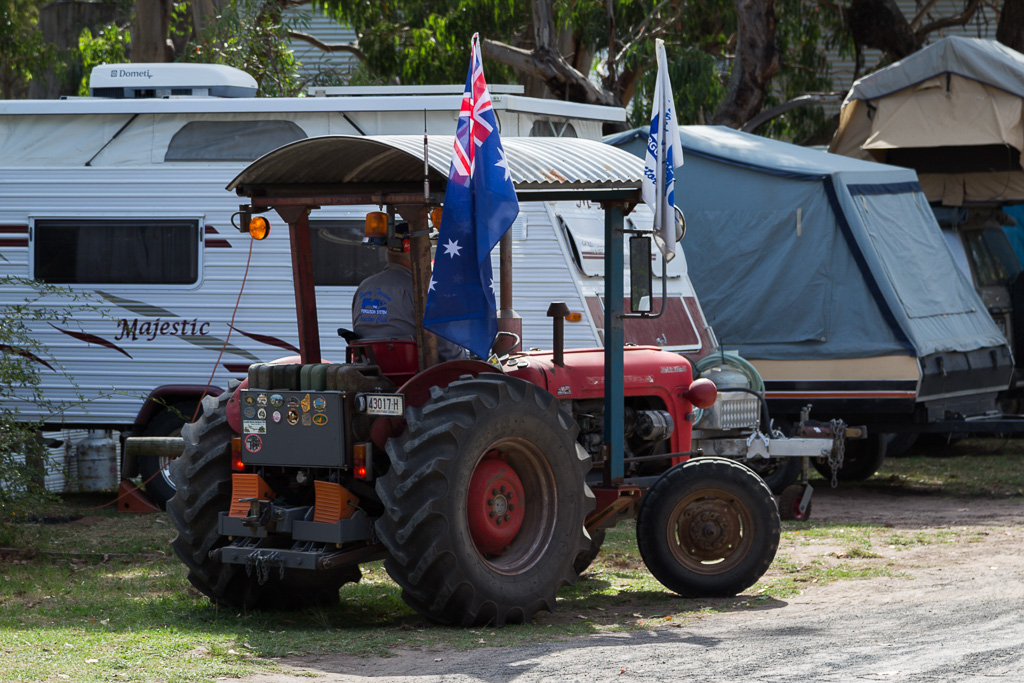 Oh. That seemed a little odd, so I looked out a few more windows. Lo and behold, there were more sights. 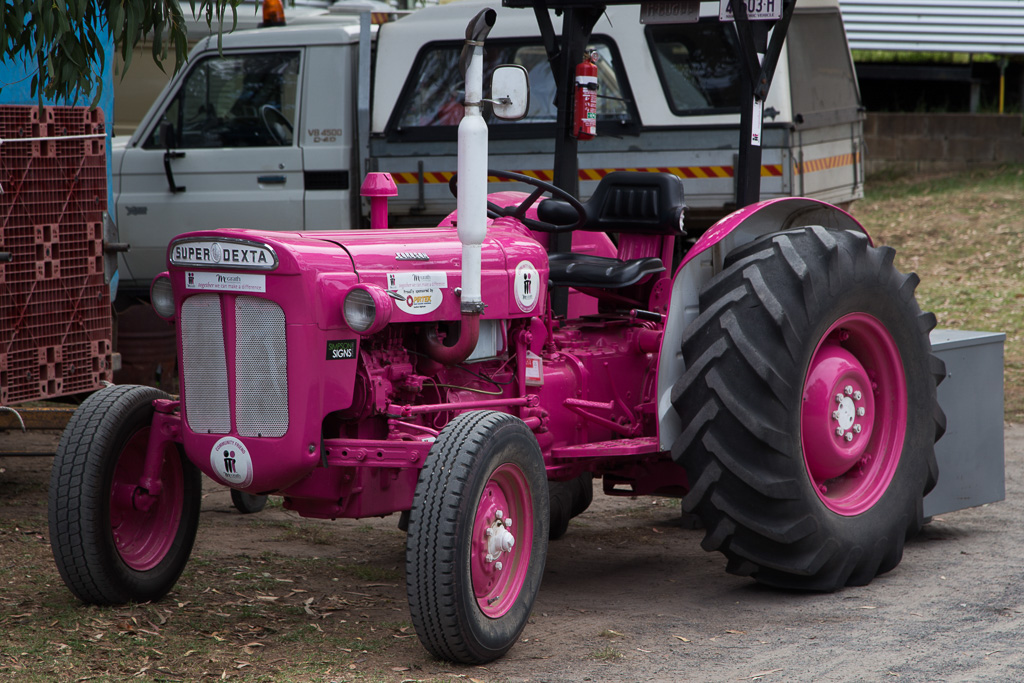 Okay. Things were getting a little strange, so I bailed up some tractor looking bloke (faded jeans and wide arse was the giveaway) and asked him what was going on. He proceeded to describe how a whole group of tractor loving freaks were driving around part of Victoria in convoy. Oh yeah, I’m not going to show you all the vehicles, but all you need to know is there were stacks of them and they were all staying at the caravan park.

Years ago, during my army days, a group of us were out in the big smoke of Townsville with a bloke called Benno, who just happened to drive a very dodgy panel van. On this particular day we all piled on board to head back to the barracks. The V8 (of course) of the van started up and commenced idling in its throaty glory. Benno stuck it in gear, but there was a problem. Yes, he found a gear, but unfortunately the only one he could select was reverse.

We watched as he dicked around trying to fix it and contemplated other transport to get back to the barracks. Now, after seeing the tractors, I bet you’re thinking we got on board one passing by to get home, don’t you? Sorry. It’s not that kind of story.

Benno looked at us and with complete confidence said, “No problem. We’ll drive it back to the barracks. In reverse.”

I’ve seen a lot of weird shit over my lifetime, but even I hadn’t been party to this one before. We all piled back into the van, Benno selected reverse and he promptly drove backwards out onto the highway. Oh yeah, do you think he’d stick to the verge and keep out the way of following traffic? Nope, he positioned himself slap bang in the middle of a one lane road, and powered along in reverse, whilst we unfortunately sat looking out the front, which of course was the back, at the faces of the stunned drivers amongst the heavy traffic trailing us.

Townsville was a bit nutty back in the mid ’80’s, as it was way too hot and air-conditioning was a rarity, so it seemed everyone had a short fuse. This reversing trip was not over a few kilometres, but all the way from town to Lavarack Barracks. Even today, I don’t think I’ve seen so much hatred on peoples faces, as what was displayed by the motorists stuck behind Benno’s reversing van.

As the current day tractor man enthusiastically described being part of a convoy of slow moving farm machinery driving on roads around Victoria, all I could think of were those faces of hatred I witnessed from the following motorists way back in 1985. Now I could understand, as being stuck behind those tractors would be a hellish experience.

By the way, if you really need to know, we made it back to the barracks in one piece, even though using indicators took a bit of thinking as the opposite applied. 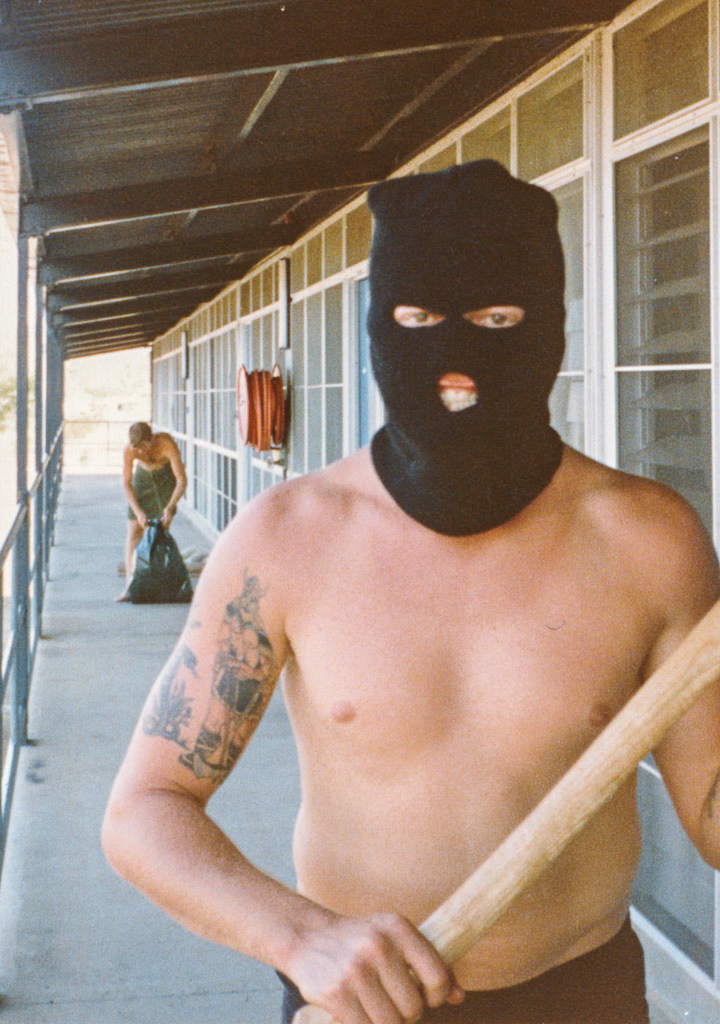 Benno liked to run his own race. Axe and all.

Back in the caravan park the entertainment continued. There was an interesting sight of a man emptying some rubbish in one of the prominent bins, still been fiercely guarded by the kamikaze fly brigade. Unfortunately for this bloke, during the trash disposal, he accidently dropped a plate into the large, wheelie bin. In such a situation, there’s only one option. Stand to attention and salute your lost plate.

No, not this bloke. It didn’t seem to matter he wasn’t much taller than the bin, as I kid you not, but he dove his entire torso into the bin until only his legs from the thighs down were visible. He was vanished for a few seconds before triumphantly pulling his plate from the decaying waste. Considering his do or die actions, I’m not sure why he then acted bemused about his shirt now covered in a kaleidoscope of food types. None of them his.

What else? There was the traditional ‘reverse and hook up the caravan’ caper to watch, as a bloke about 235 years old stood at the back and gave instructions to his wife who was driving. In a growling voice caused by a lifetime of too many cigarettes without filters, he slowly motioned his hand backwards,

You’d think instead of reversing the car to the caravan, she’d actually run him over instead and was doing a burn-out on his head. Suddenly, as quickly as the tirade of anguish and profanity started, it stopped, followed by a quietly said, “Perfect.”

All I could think of was how I should stay in caravan parks more often.

One other notable observation was the amount of Europeans around us. It was like a cultural melting pot of different languages being flung around. French, Dutch, Swedish and Old Church Slavonic were just a few. I should have realised this on the drive in. The road leading to the caravan park is a vehicular homicidal maniacs dream. Turn a corner and you’re confronted with dozens of people standing on the road pointing their cameras skywards. 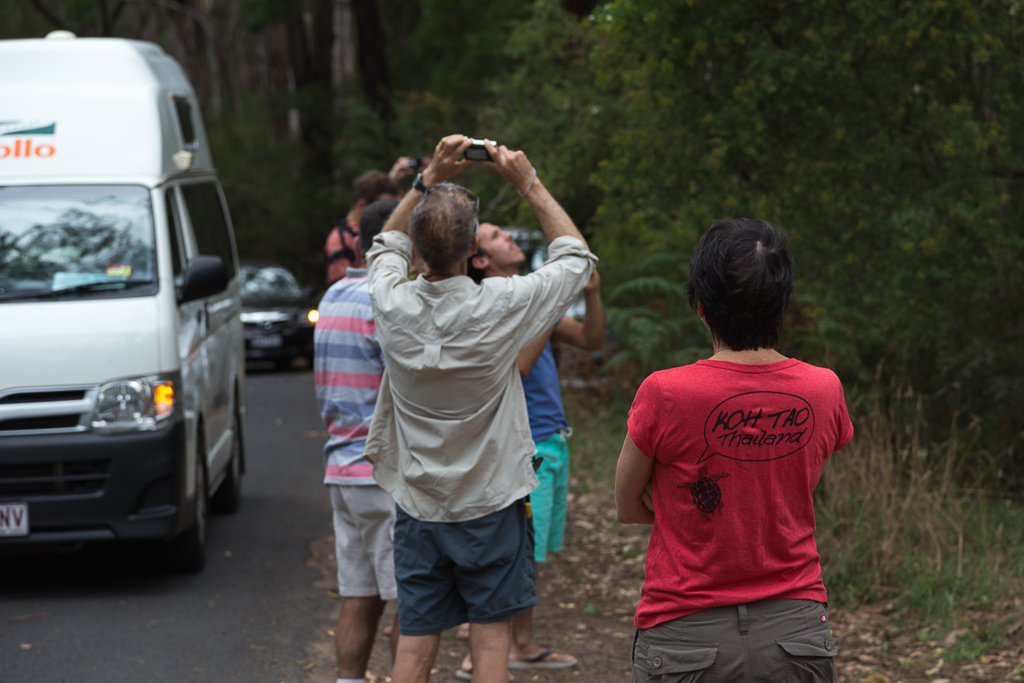 Even I had to stop and see what the fuss was about. High in the trees above, koalas were laconically going about their daily ritual. Eating and sleeping. This is the only fur ball photo I took, as I was scared I’d be caught in a human stampede. 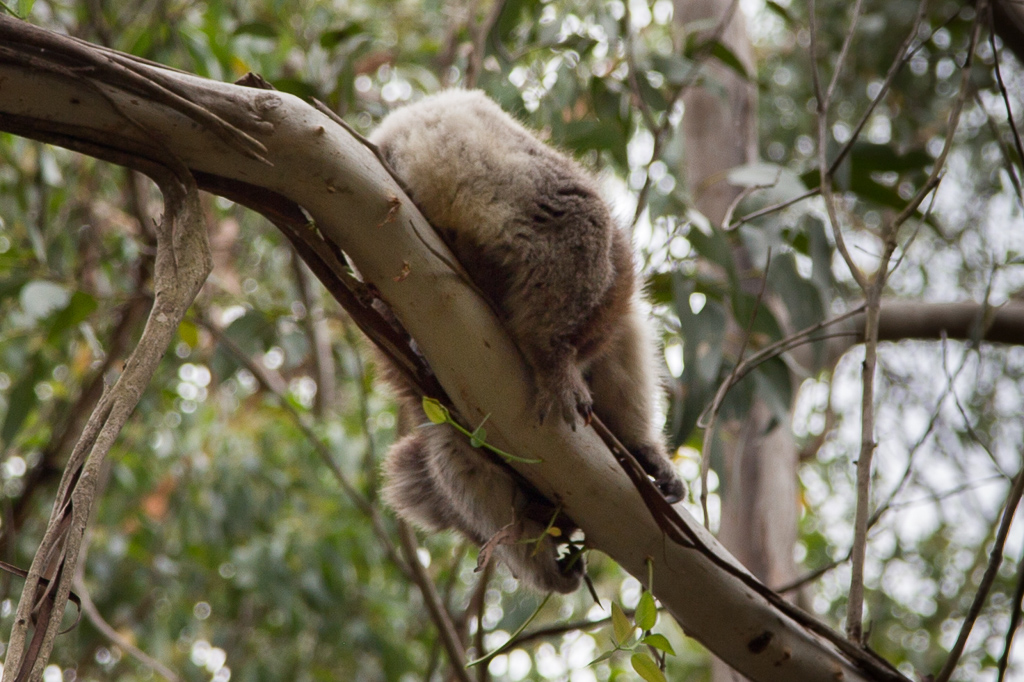 It was all pretty mellow, but there’s always one knob in the crowd. A ruddy faced, overweight bloke with faded denim jeans, white runners (you are formally sentenced to death for crimes against fashion) and toting a car with Tasmanian number plates, stood with a scowl on his face. I could see the gears ticking over in his head, as he attempted to come up with something suitable for the occasion. Eventually he barked, “You’d think everyone would already know what a koala looks like!!” before storming back to his car.

Anyway, we’ll leave racial stereotypes out of the next bit, but within the caravan park, I saw driving to a level of crapness I couldn’t believe was possible. We sat outside the Smuffin base camp watching a series of crazed attempts to park huge, hired campervans. There was the casual drive into a tree or ‘the park-so-close-to-the-door-of-a-tent-in-an-adjoining-site-so-the-occupants-can-no-longer-exit-their-tent’. That’s always a beauty. How about the traditional, ‘unable to slot a vehicle into an area the size of a football field’? The ‘go in too deep on the wrong angle’ method, resulting in a laborious reverse back out, then finding the only solution was to drive the entire circumference of the caravan park before coming back for another attempt. I could go on and on, but there’s some hiking to do.

If you want to know why Smuffin is called Smuffin, all you need to know is it’s a mash-up of his name to whatever he cooks. Mind you, it’s rumoured Olensk changed its name to Smolensk after he visited Russia, Anyway, the breakfast muffin thing he makes and wants to patent is the main dish. Come hiking day, the George Foreman grill was in full swing. 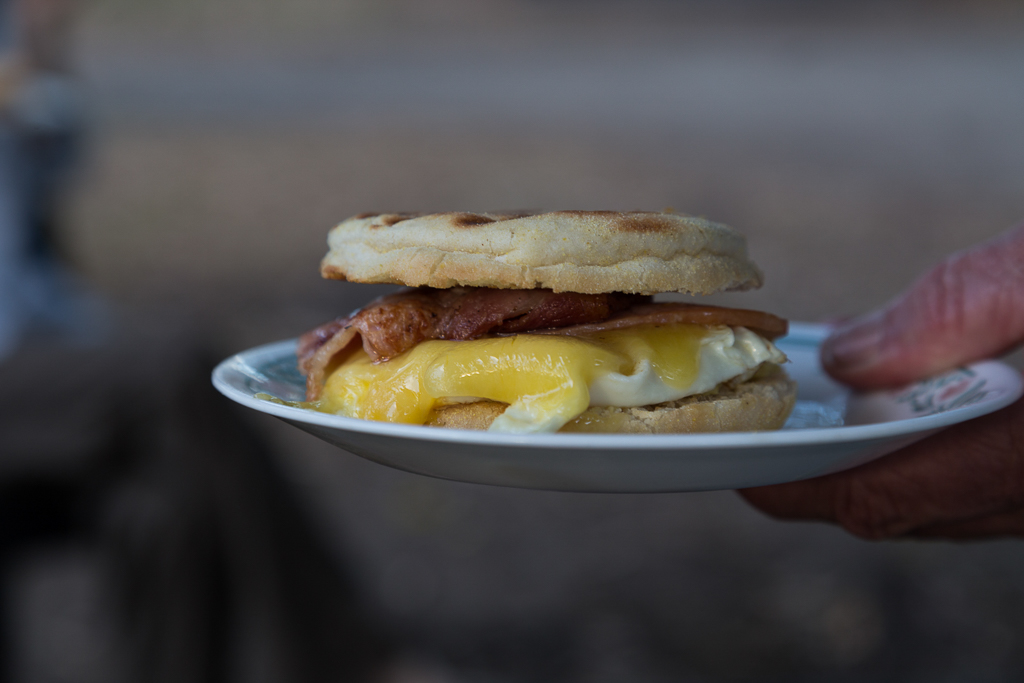 “No, take the photo from this direction. It looks better with the cheese spilling out.”

Time to head off for the walking part and there’s something I’ve kept in my memory bank. Caravan parks are a writers dream.