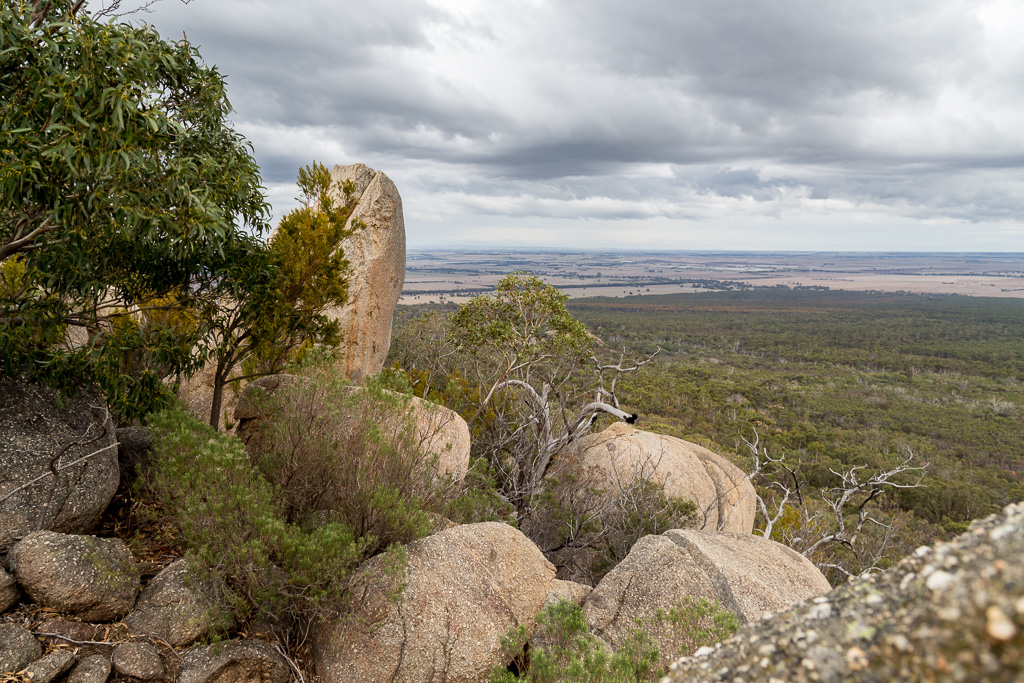 I must say, I’m happy to be writing this You Yangs post. It’s Friday afternoon, work is done, it’s still daylight, yet I feel like going to bed. Talk about feeling stuffed. The bonus is this entry will be quick and with only a handful of photos I reckon I can write it and hit publish within an hour. Is it possible?

My last post described a stroll up Flinders Peak in the You Yangs, whilst accompanied by a multitude of sweating hordes on a Sunday afternoon. This walk starts from the same place as the rush hour stroll, but there’s a big difference. No one seems to do it. I had a punter-free run, whilst wandering this underrated walk. Oh yeah, there was definitely a surprise at the end, which is the reason I decided to write up these You Yang walks at all.

Now, whoever named this short walk which circles Flinders Peak, certainly didn’t test their imagination too much. “Okay, this walk runs east, but then goes west. What shall we call it?” Oh yeah, East/West Walk is its name and maybe a nondescript title puts people off? Who knows, but it was a bonus for me.

There really isn’t much to write about, so I might as well get into it. After a steady climb I was impressed by the views from the track. The sky was a little strange though and for a moment it looked as if a lenticular cloud was forming. Almost. 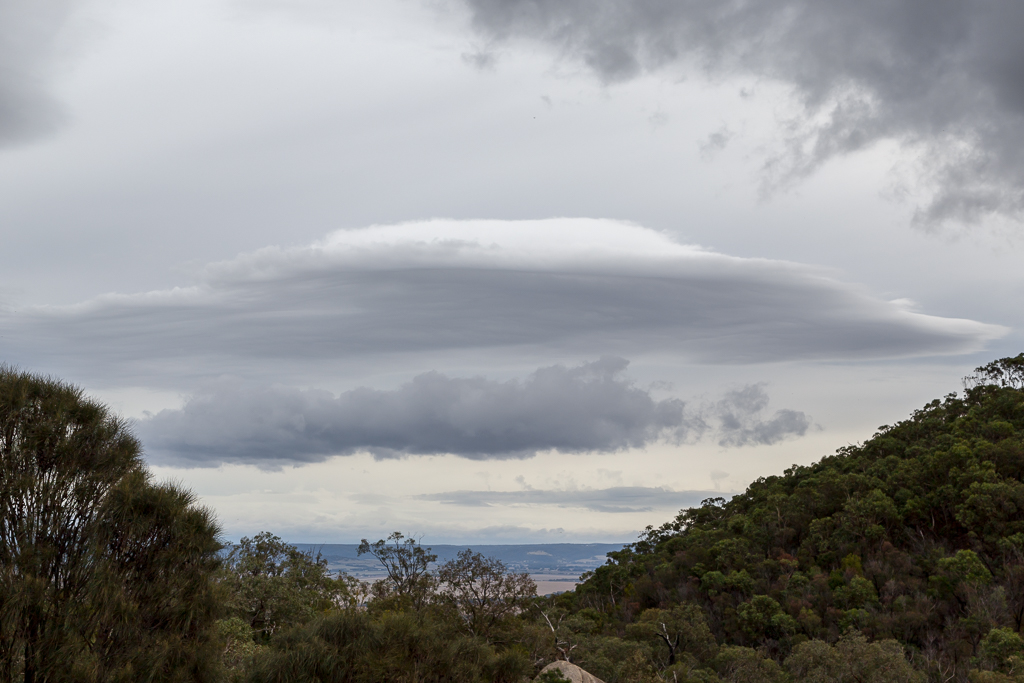 See the cloud in the middle? It seemed to be developing the lenticular shape, before turning into a stretched out mess. Can you see what I mean? If not, how about this method. Look at the cloud and then close your eyes. Now get your partner to clock you across the back of your head with a large, rubber mallet. Now open your eyes and look at the cloud again. It’s lenticular, isn’t it? Maybe I’m getting delirious, but that can happen when you’re a cloud-nut who’s never seen a lenticular in the flesh.

The views kept coming, but I also continued keeping an eye on the clouds, as they were potentially photo-worthy. 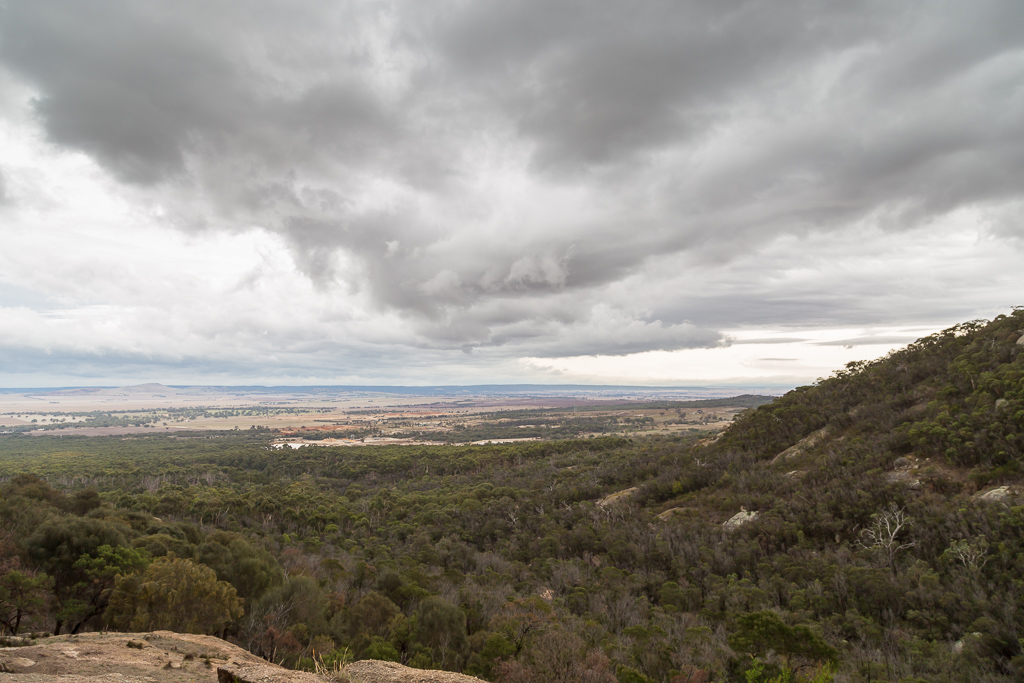 The open vista was impressive, but so were the various rocks and boulders lying around. I do like big rocks. If you’re repeating that last sentence to anyone, ensure you get it right because if you slip up, the person you’re talking to might raise their eyebrows a little bit.

One interesting boulder is noted as an old Aboriginal shelter. Until seeing it, I was a bit sceptical, but on close inspection it was a beauty. If the weather was crap, this is the rock to shelter under. The photo doesn’t really show how enormous it is.

Moving on, there were a few more open views… 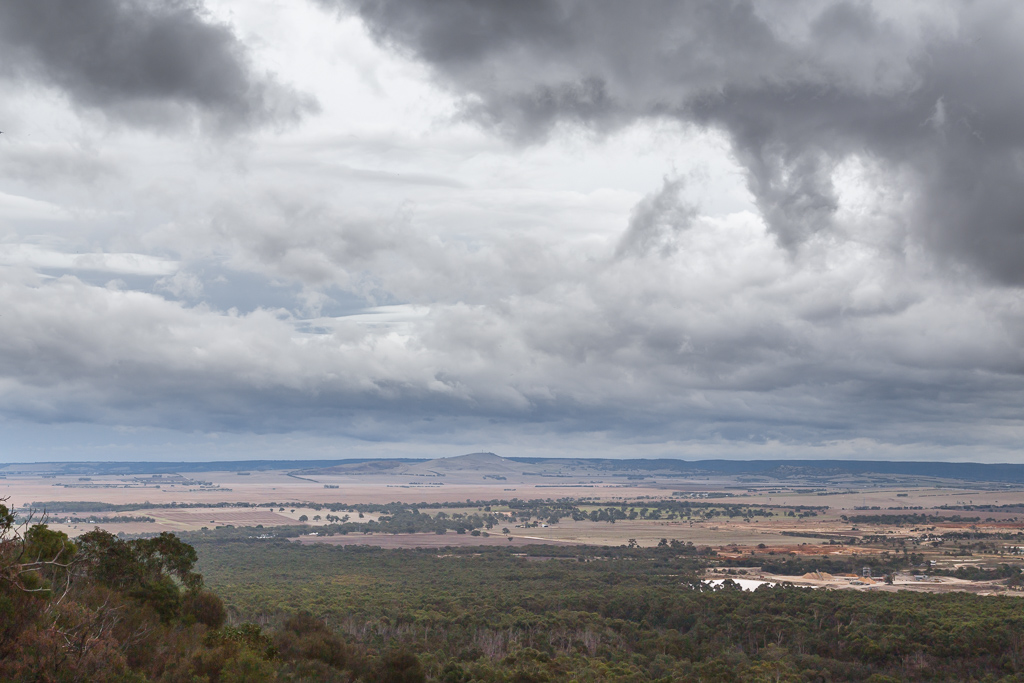 …and some sections where the track was hemmed against the granite. 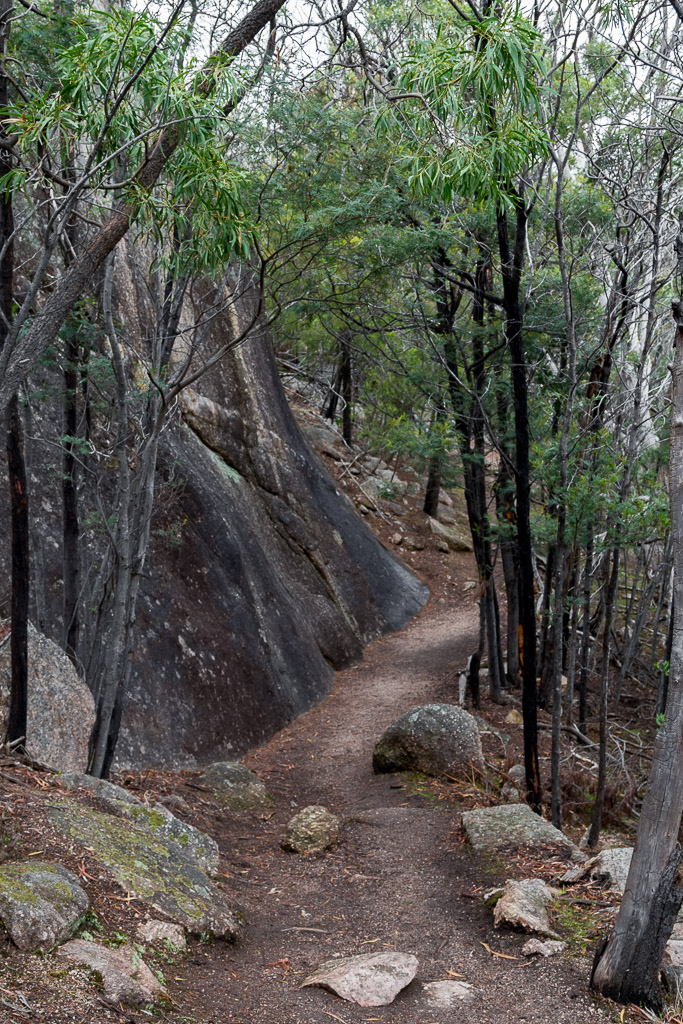 I must say, it was action aplenty as the views continued… 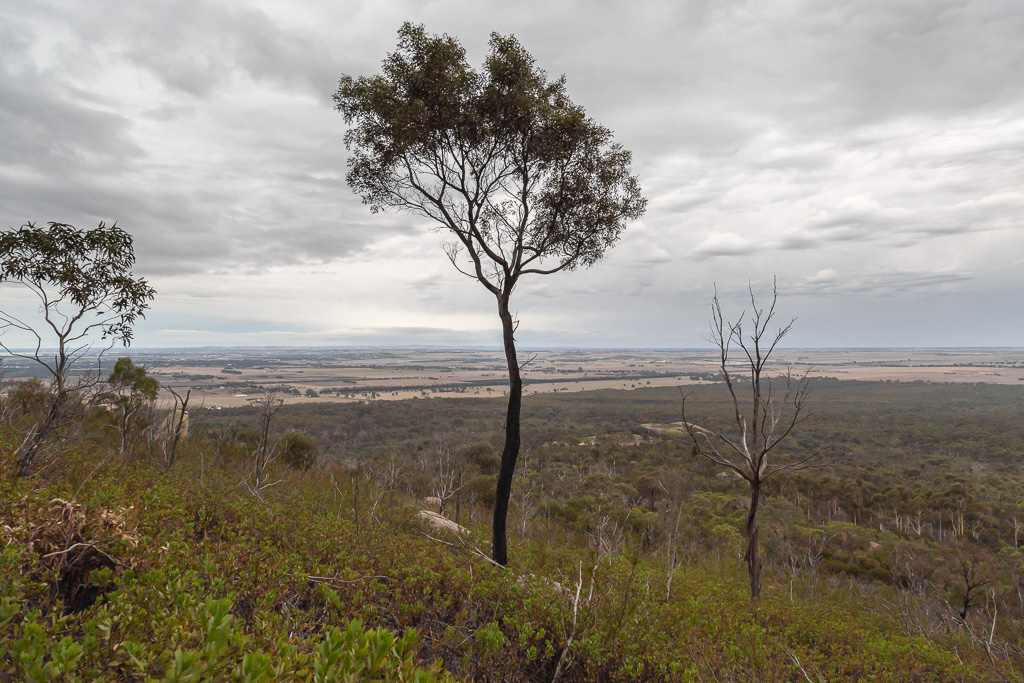 …but the worse thing about the whole place is it’s over too quick. This is only a 5 km walk and I’d knocked it off in no time. I wish it was twice that length. I suppose I could just keep doing laps all day and turn it into an epic? Umm… No. Even I wouldn’t do something as dumb as that.

It was a shame to see the car park come into view so quickly, but there was a little bit of magic left up the East/West sleeve. Only a few hundred metres from the bitumen I saw an object in a tree and its shape was mighty familiar, but at first I thought I was seeing things. 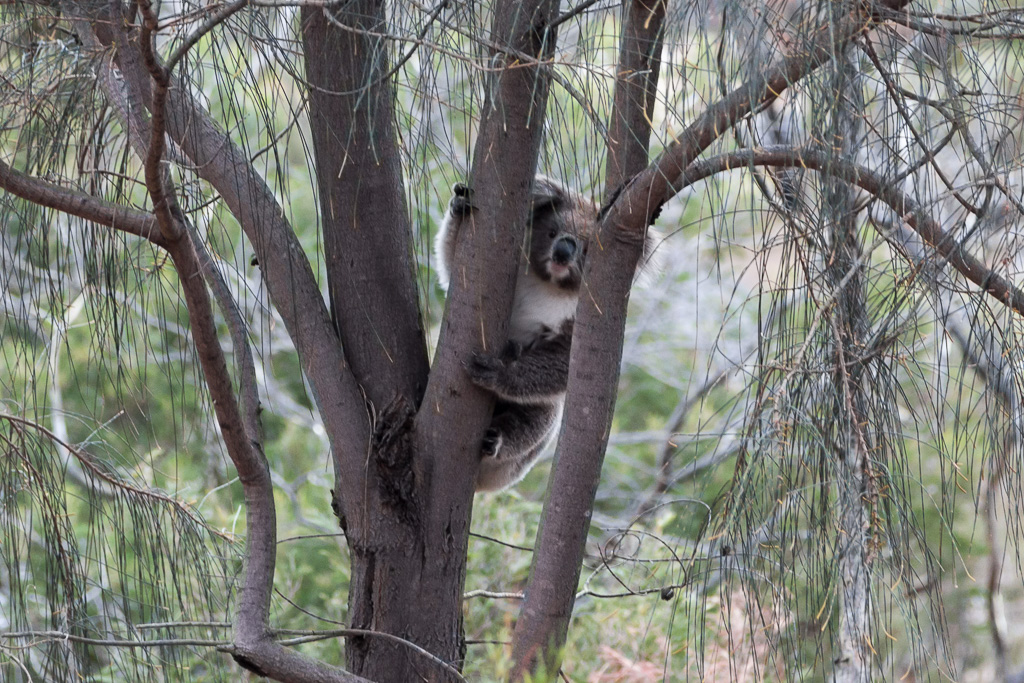 I may have rubbed my eyes in order to convince myself I was actually seeing a koala climbing, but there’s no mistaking that shape. It certainly wasn’t his sort of tree for eating, so maybe he snuck up there when he heard my thumping feet approaching? I didn’t want to get too close, but the zoom lens was on my side. Luckily for me, I was able focus on our furry friend, rather than the branches in front of him. 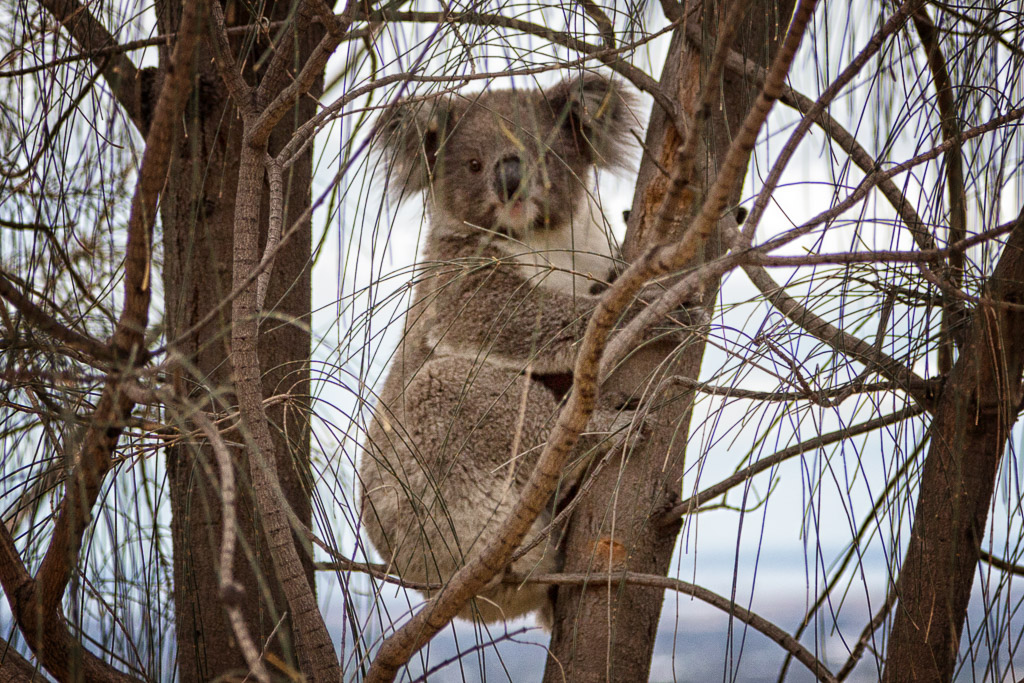 Strolling behind, I took another photo and although he was keeping a fairly close eye on me, he seemed non-plussed. 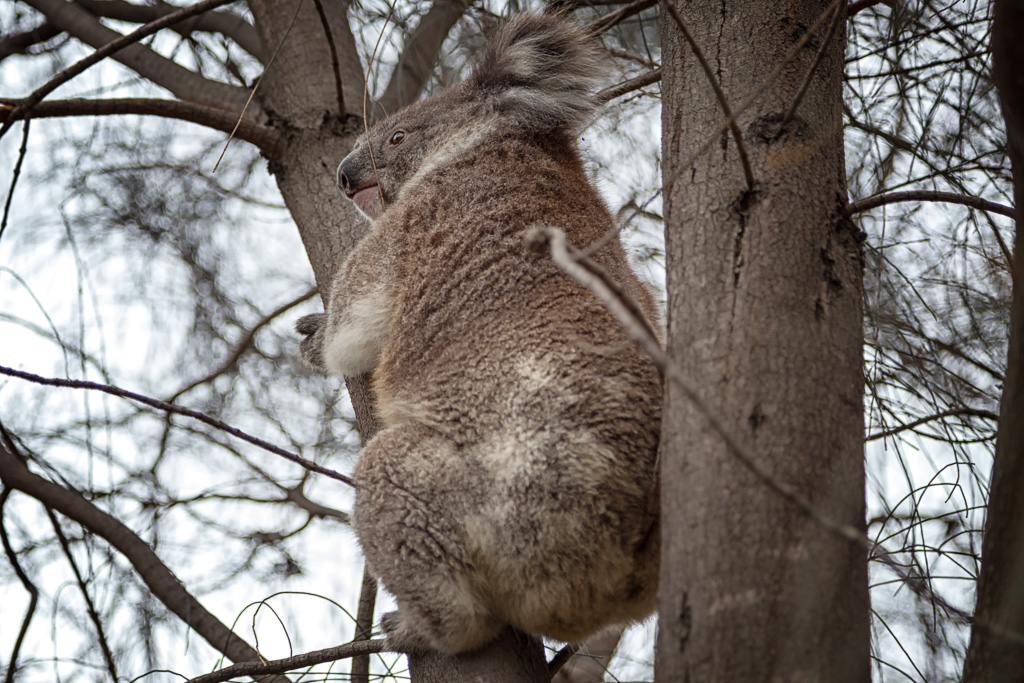 Can you see why I had to write up the You Yangs walks? Seeing a koala in the wild is always a special moment and come to think of it, I can’t say I’ve seen any on walks since the Great Ocean Walk from a few years ago.

There you go. That’s the walk done. How easy was this post? No need to dig in for the long haul, as it was over before it even got going. The East/West Walk, You Yangs Regional Park is a great little walk though, with plenty of views, big rocks and some native wildlife. There was a last piece of comedy when I perused the GPS. Remember how I said it was only 5 km? Well, I lied. It was 4.59. No wonder I was finishing before getting out of first gear.

What’s to come? I’m not sure, but there’s a few posts in the pipeline. See how I go at work next week. If I’m not too knackered at night I’ll tap out something a bit longer. Oh yeah, remember the start about writing this up in an hour? It took me 2 hours 45 minutes. Almost an hour…