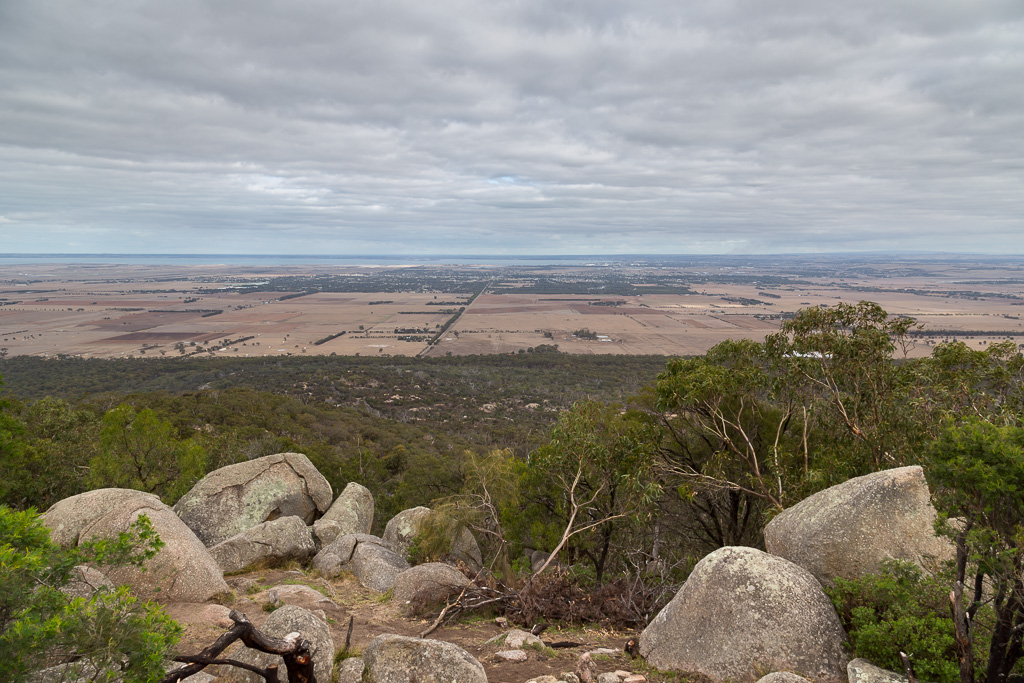 Initially I wasn’t going to write this post, as it’s not really a hike or a walk. Yeah okay, technically it’s a walk, as one foot goes in front of the other. It’s such a short stroll though to the top of Flinders Peak, You Yangs (340 m), you could in theory do it on hands and knees. That method could take a while, so I suggest you get a bloke in leather shorts and fishnet singlet to give you a whipping on the crawl up, otherwise it’ll take forever.

The reason I am writing it though is for two reasons. The first is it’s part of my ‘back to back’ specials. Previously I focused on Lerderderg Gorge and this time it’s the You Yangs, as the second walk in this special has to be written up due to a unique sighting I had. So, I couldn’t just do the one post, could I? Then it’d be the ‘one’ special, which doesn’t sound so fancy. My disclaimer though is this entry only exists due to the one which follows. Nothing happens on this walk. I don’t fall over, meet any freaks or die. I can’t even say the photos will be any good.

The second reason is I’m about to blow my top with Picasa. I’ve been using Picasa web albums since the blog started, but lately there’s some weird stuff going on in there. There’s no way to describe it other than Picasa has turned my photos to shit. The picture you end up seeing on the blog, is not the rich, saturated image that I’ve created on my computer. During the uploading to Picasa, they’ve suddenly turned the photos into over-brightened, over-sharpened, overboard crap. My hunch is it’s all to do with the added free space given for Google plus punters. They’ve reduced the file size of pictures, subsequently frying them into submission.

Actually, is there anyone on Google Plus, or should that be Google +? It seems Google are hell-bent on everyone being forced onto it. Bloody hell. I’ve got enough social media duties without another one. I’ve spent years being on Facebook, but essentially not doing anything on it. How would I go with another social media site, which I’d be on, but ignoring?

So, this is an experimental post, as I’m practising using Flickr as my photo storage. Already, I’ve buggered up the HTML cross-over, so I’d better fasten my seatbelt if I’m going to get this post done and looking remotely the same as other posts.

Right. Back to this ‘walk’. I arrived at the You Yangs on a Sunday and it appeared half of Melbourne was there. To top it off, the light was rubbish. An overblown, whiteout of a sky, so the photos were always going to be flavour-less. It was always going to be a hit-run mission and as it appeared the masses were scurrying up Flinders Peak, I figured I’d might as well join them.

The beginning is one of those wonderful, over-engineered starts, which pop up in parks now and again. Stairs. Right, I’m off to Flickr and sucking up some HTML code. I’ll be back in a minute. 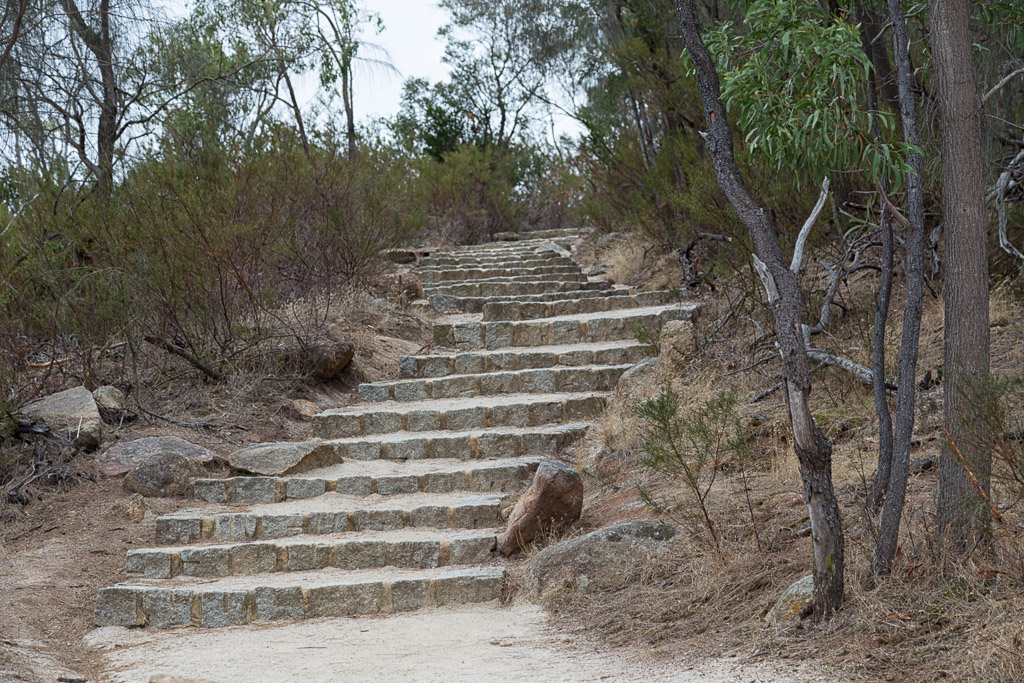 Stairs only. No elevator.

Right it took longer than I thought, but I think it’s done. Mind you, I lost my mojo for a minute there and placing the picture took me about four hours, as I had a nap on the couch.

Heading up the stairs, it was hard to get a photo without a million people in them. I’m not much of a ‘include-sweating-hordes-in-nature-photos’ type of bloke. The thing is I began to note something quite quickly. Everyone coming down had big smiles on their faces, were happy to say ‘hello’ and appeared to behave as ‘fresh’ as they could. “Struggling up are you? Ha! Look at me. I’m fit!” Don’t for one minute think I can’t be as paranoid about peoples actions more than anyone else. When I retire from work in about six years, I’ll write a post about my job which I’ve been in for the past 25 years. You’ll get a kick out of it and it might explain my slightly unhinged thinking!

Right. Flinders Peak is small, but I’ll put my hand up and make full admissions I was dying on the way up. At least there’s some nice lookouts to take away the pain. This chair was well-placed. 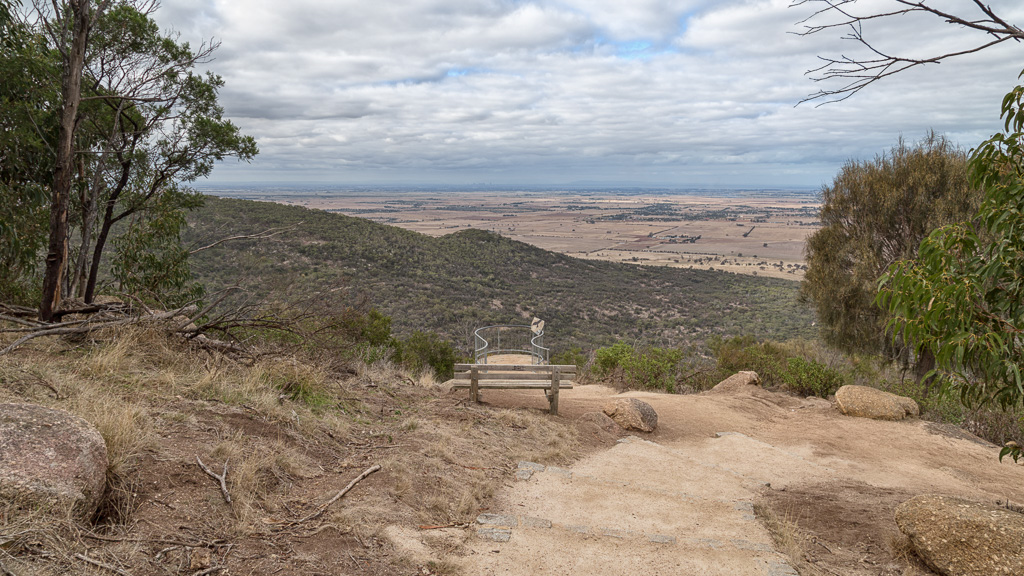 By the way, ignore all my earlier ranting about Picasa, as I’ve started using it again. I turned my computer off earlier and then restarted this post. Resigning into Flickr, grabbing the HTML code and fixing it up in the post is way too hard for my brain on a Friday night, so you’re getting the pictures in the current ‘cooked’ mode.

Actually, the chair above has a nice view down towards an enormous geoglyph of Bunjil. Here’s a view from the lookout… 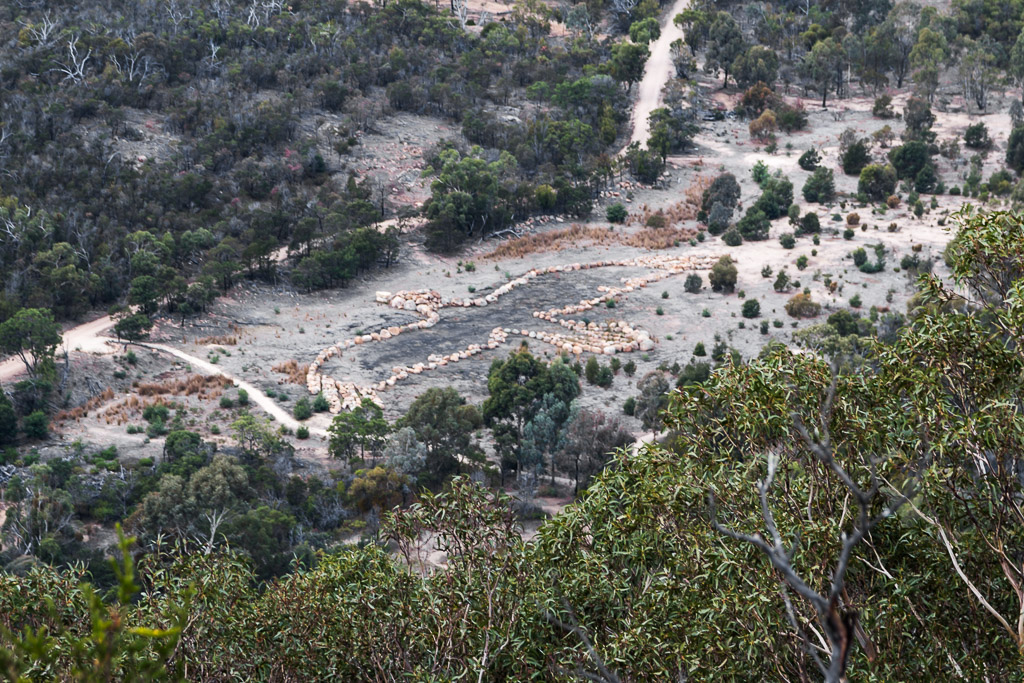 It’s certainly impressive, but did you know a crow helped Bunjil out by creating a cyclone, which got him up into the sky so he could become a star? Okay, the cyclone was in a bag, so the story is up for conjecture. Anyway, the main thing is it would be cool if the Bunjil geoglyph had a crow nearby as well. Even better if it was exactly like this… 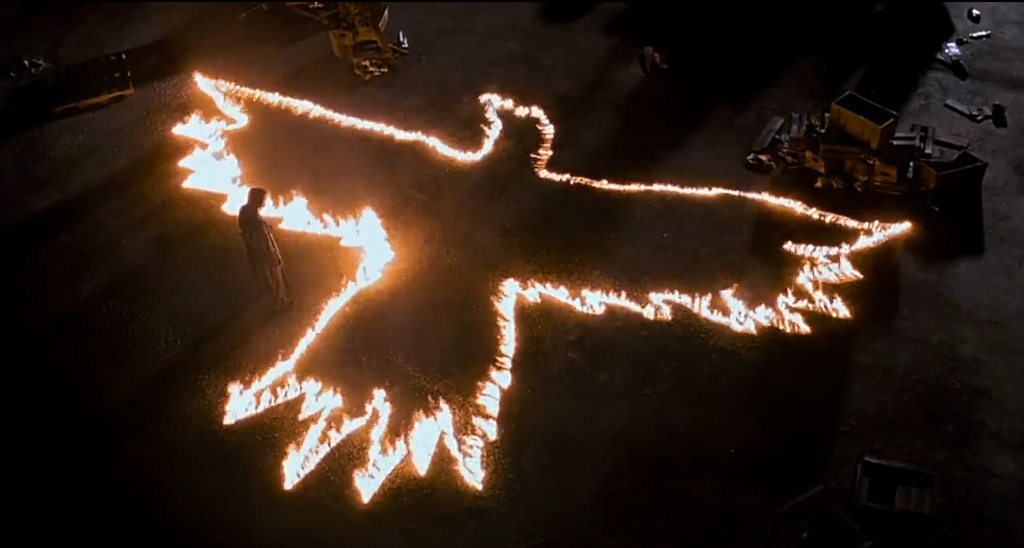 ‘This is the really real world. There ain’t no coming back’.

I reckon they’d be great side by side, flames and all. Back in the really real world, not a lot was happening other than I was huffing and puffing up the hill like a steam train. It was surprisingly hard work, but at least I found a large leaf to look at. 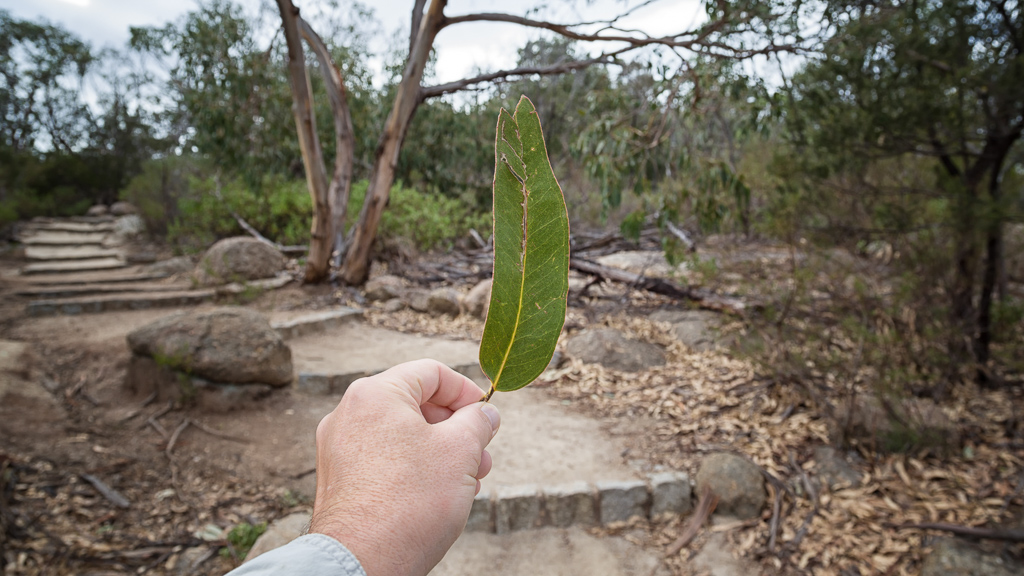 I’m lucky this peak was only a few hundred metres high, as I was knackered by the time the top came into view. A light on a pole is the indicator of the summit… 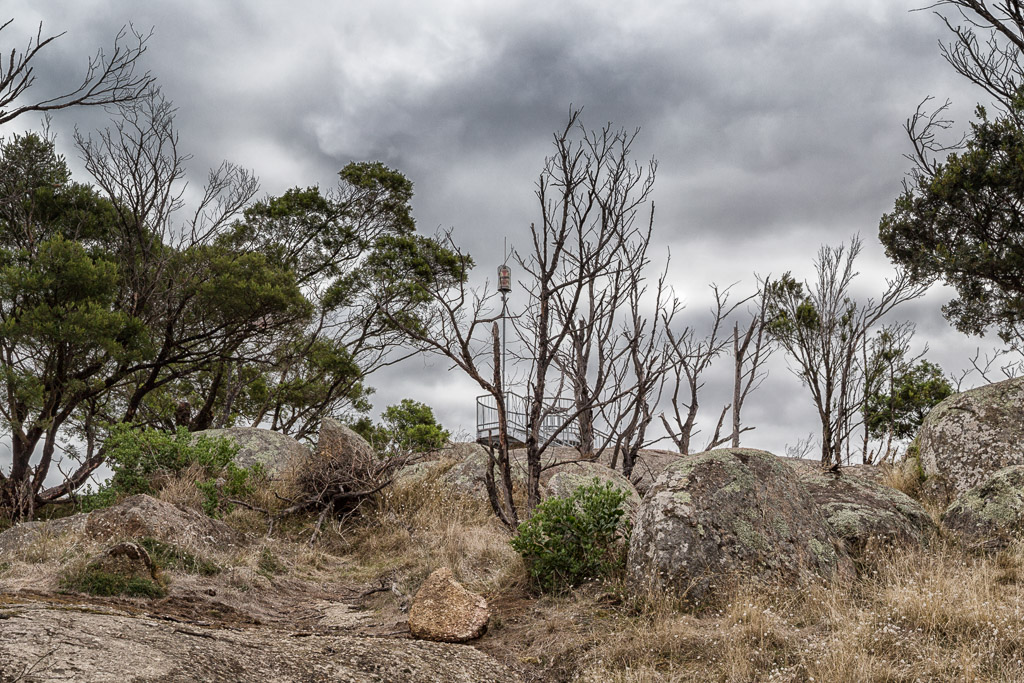 …and within a couple of minutes I was there admiring it. Well, it wasn’t that thrilling, but by standing under it, I was at least satisfied Flinders Peak had been bagged. 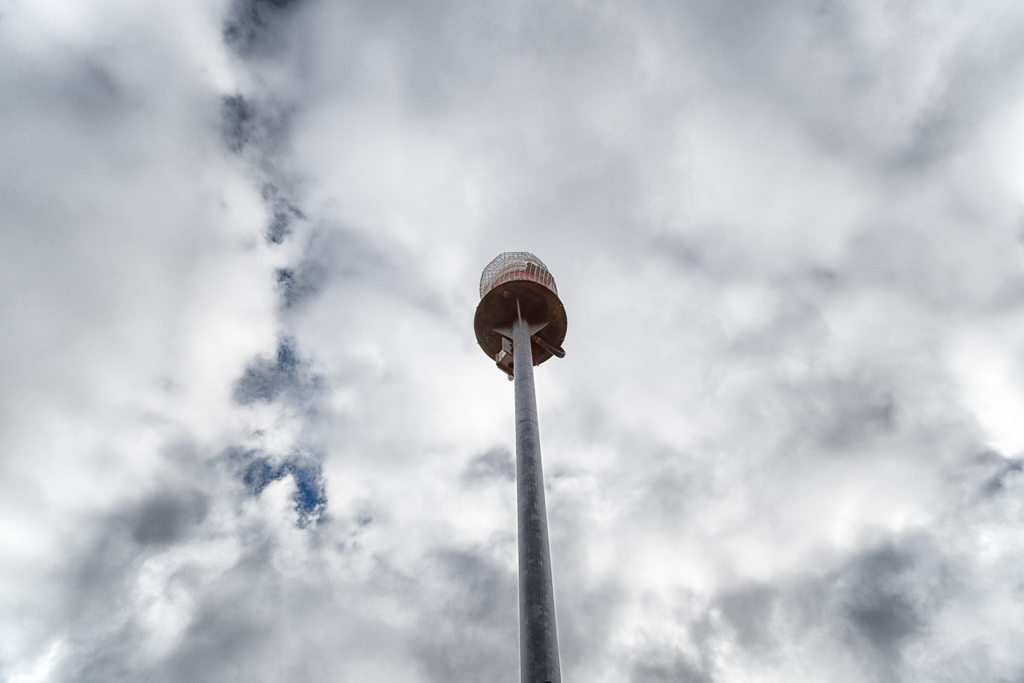 The views weren’t too bad. A nice fire in the surrounding fields was a highlight… 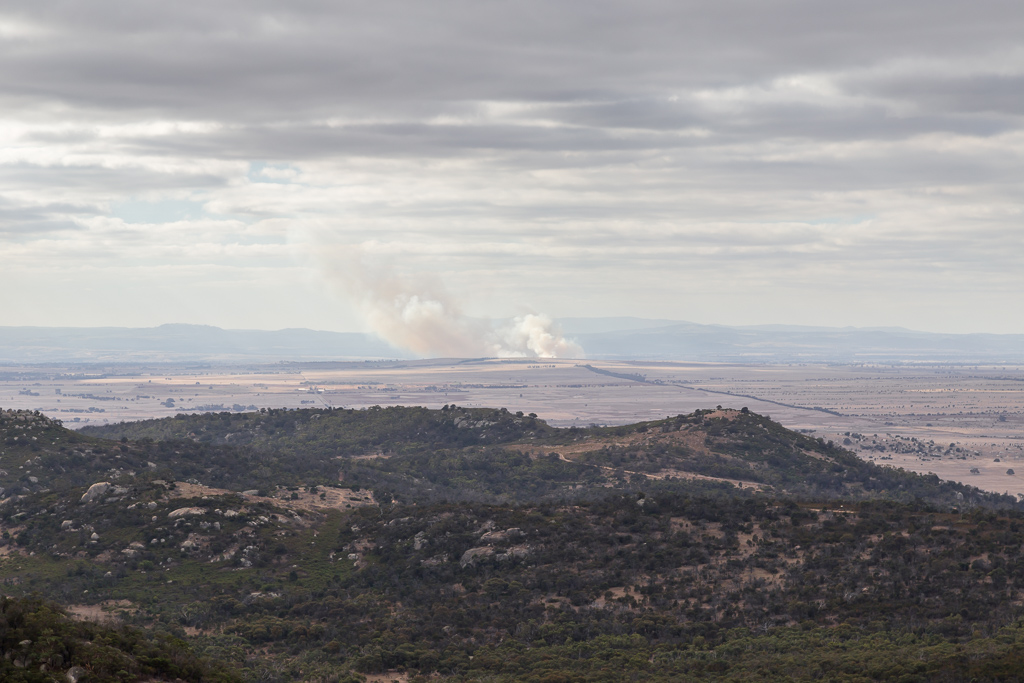 …and really that’s about it. A few other people were on the top at the same time and we all stood around gloating at the others who were still trudging up. The trouble is, the looks of suffering from others still climbing was a tough thing to witness. The climbers with their sweat covered brows and tomato coloured faces was too much, so I shouted to my successful summiteers, “Don’t cheer boys. The poor devils are dying.”

Wow. It took a lot of work to sneak that quote in. What happened next? Well, it was now my turn to be one of those people walking down, bounding along and smiling at everyone, whilst making out I was fit as a fiddle and inferring to everyone struggling up they were wimps for suffering so much. “Struggling are you? Ha! Look at me? No problem for me!”

It wasn’t the greatest viewing when I perused the GPS. Oh yeah, 3.14 km. Now that’s a walk!

Okay, next up in the back to back You Yangs special is something a little longer. A five kilometre walk. I kid you not…