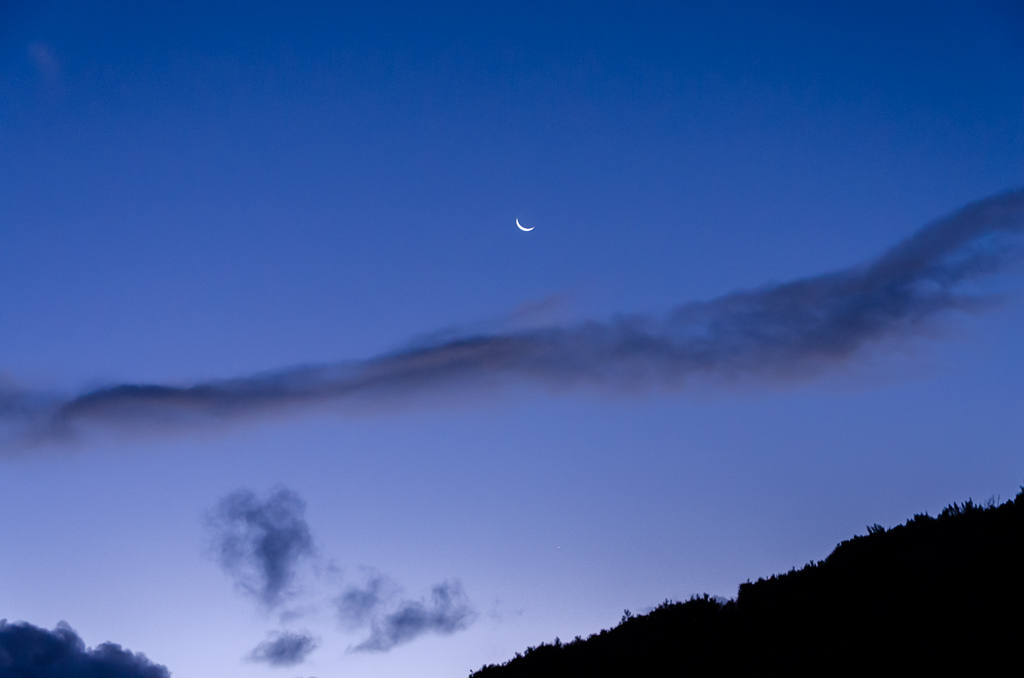 At the end of my last post I mentioned that I was going to have a break from writing about the eternal Great South West Walk hike from last winter. Guess what? Well, I’ve changed my mind, as I think I’m on a roll. One post a week in rapid-fire style and this saga will be finished within the month. Quick posts can mean one thing though. Some may be deadpan which is potentially a fatal blog affliction.

By the way, do you realise that the word ‘blog’ still comes up on spell-check as not being a word? Is that possible? I noted that it suggests I was meant to say ‘glob’. Are they taking the piss? Anyway, regarding this walk, my aim was to have it all written up before the coming winter. A lazy year to write up the one hike isn’t too bad, is it? Let’s hope I don’t do the AAWT one day.

The night at Tarragal camp was a bit of a shocker. Heavy rain and strong winds wouldn’t let up for hours and this caused a major sleeping drama. My LightHeart SoLong 6 tent was getting a bit saggy under the deluge, but being sil-nylon that was to be expected.

Around 2 am, I crawled out into the apocalypse to bring the tent back into shape by tightening the line-locks on all four corners. No problem right? In theory yes, but as I tightened one corner I was surprised to see the line-lock, complete with cord separate from the tent altogether. This was disappointing as these create the major tensioning on the tent and without one, there was a distinct collapsing on one side.

No longer taut, the water was building up all over the place, so it took some diligent sponging for an hour or so to prevent my sleeping bag getting wet. Pretty exciting huh? It was going to be a problem for the rest of the trip, so a solution was needed and Smuffin came up with one. More on that later.

The best thing of all was that dawn brought blue skies and what looked like a comfortable day ahead. We were headed back to the coast which was far more appetising than another day spent in pine forests. Early morning sun had also brought Smuffin back from potential suicide due to his previous days drenching.

We set off reasonably early and made a beeline for Discovery Bay. A long steady climb up a paddock may sound quite dull, but it was actually an early highlight. As the photos show. 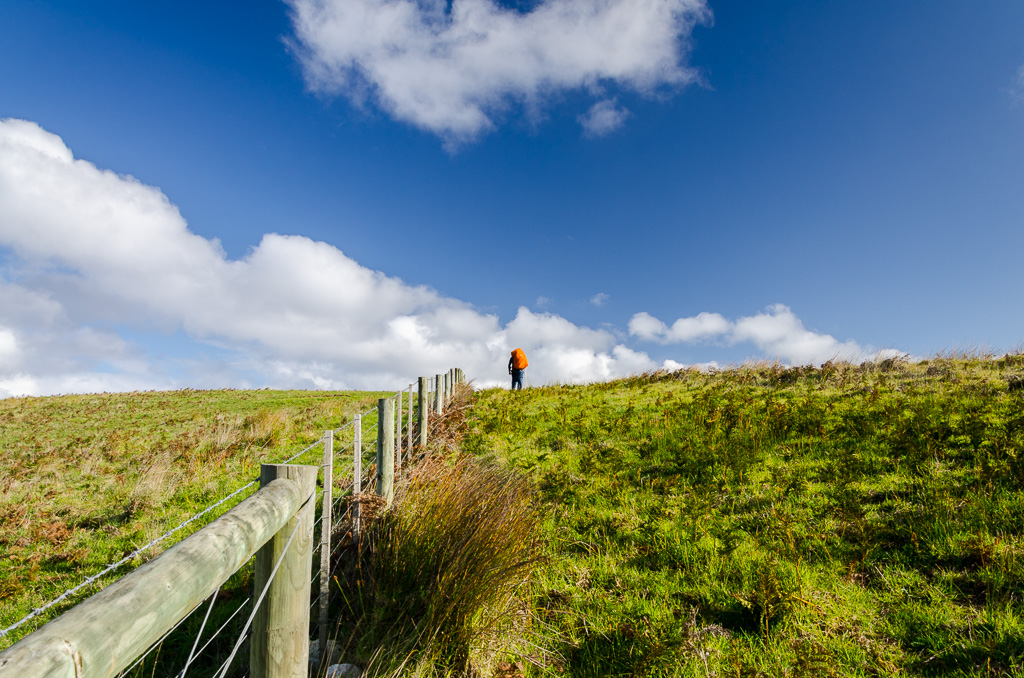 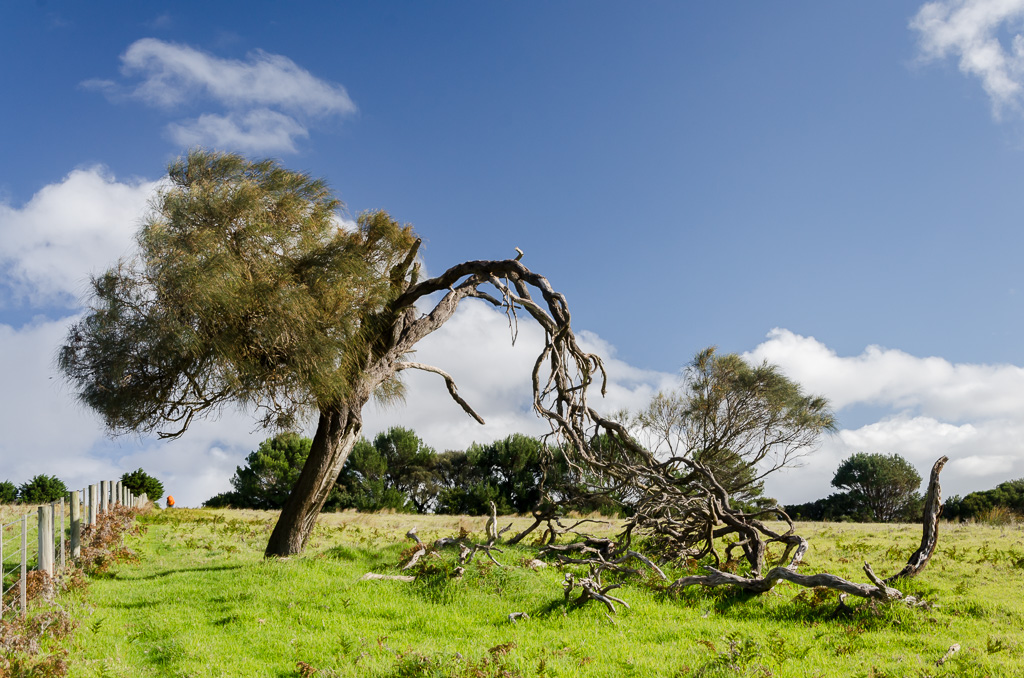 …and then beginning a descent, alongside a line of pine trees with the ocean in sight. 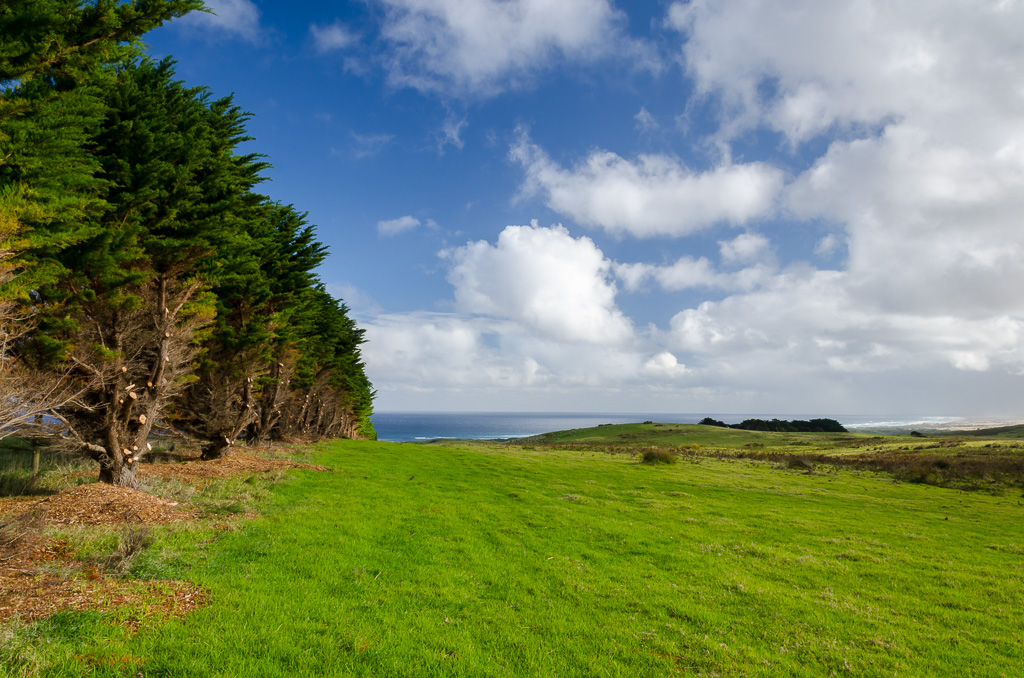 There was a good view of the coastline from here and although sunny, there were still showers passing through. 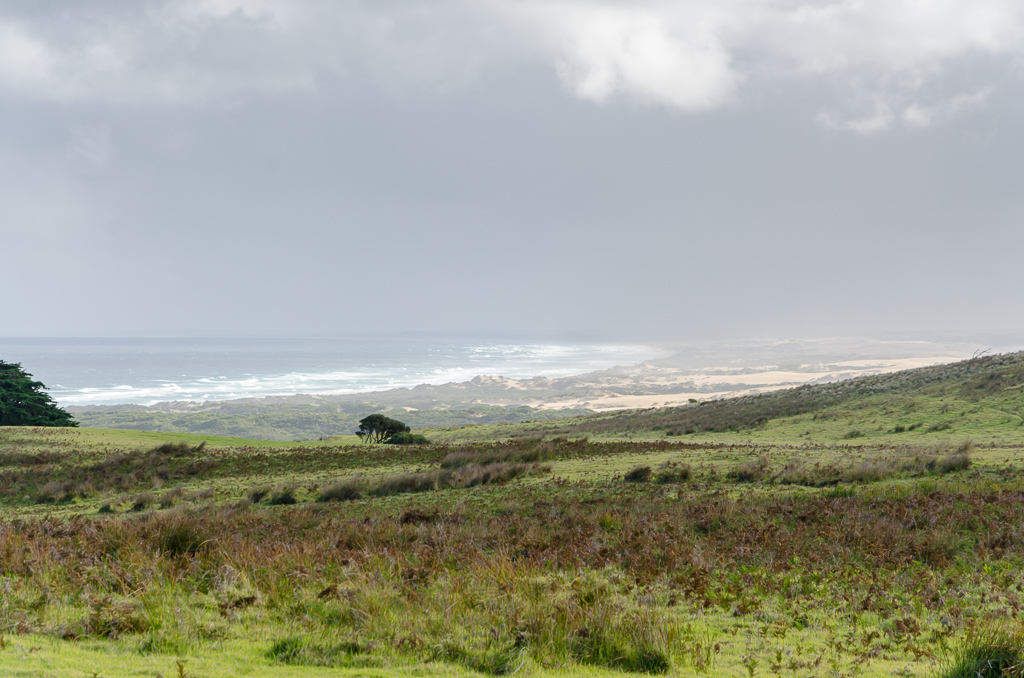 A bird soaring above looked interesting, but this is the best I could do with a minimal telephoto lens, which reminds me I should get something with a bit more grunt one day. After cropping the picture half to death, I think I can confidently say that it was a wedge-tailed eagle cruising past. 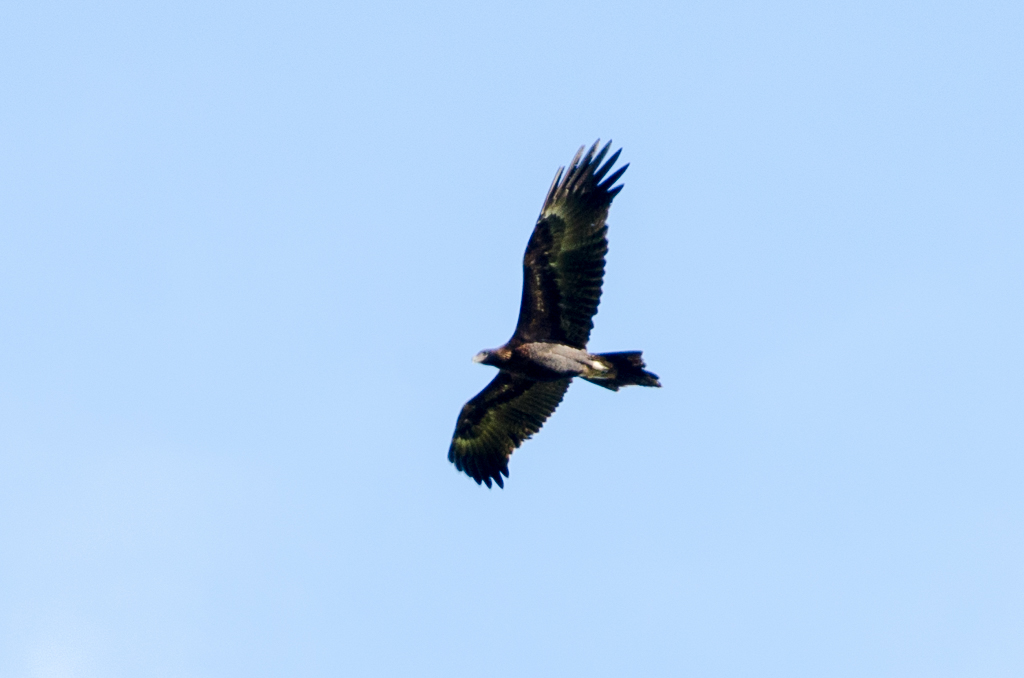 The descent continued until reaching the insanely sleepy hamlet of Bridgewater. This place is so nondescript it doesn’t even have a Wikipedia page, which is saying something. There’s a nice winding road for photographs though… 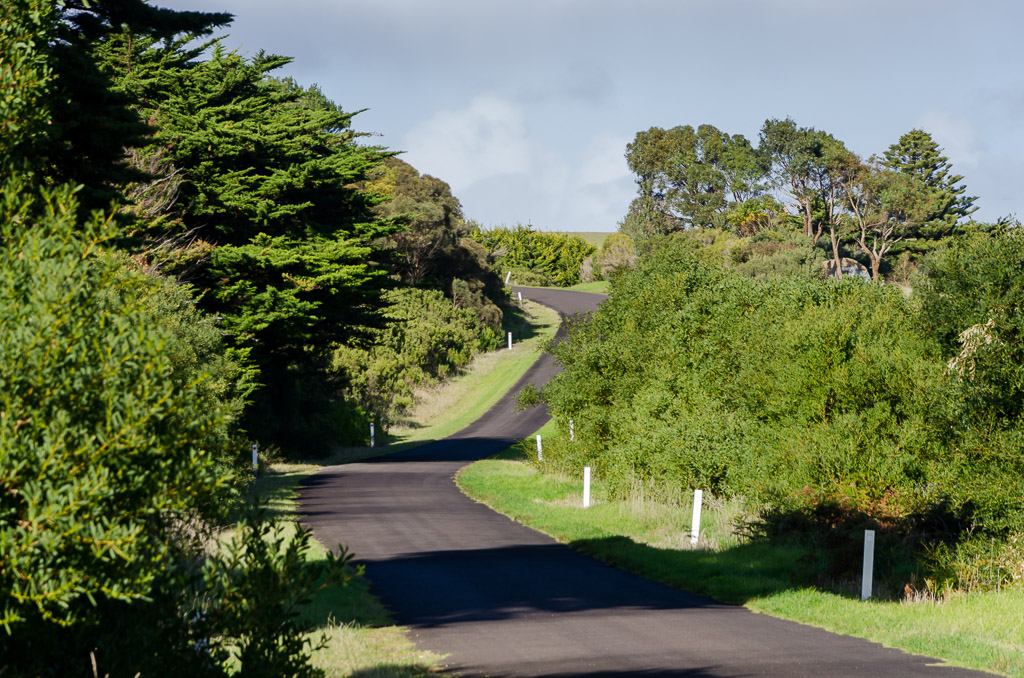 …and a lake as well. Sorry, you can’t really see it in the next photo, but it’s there somewhere. 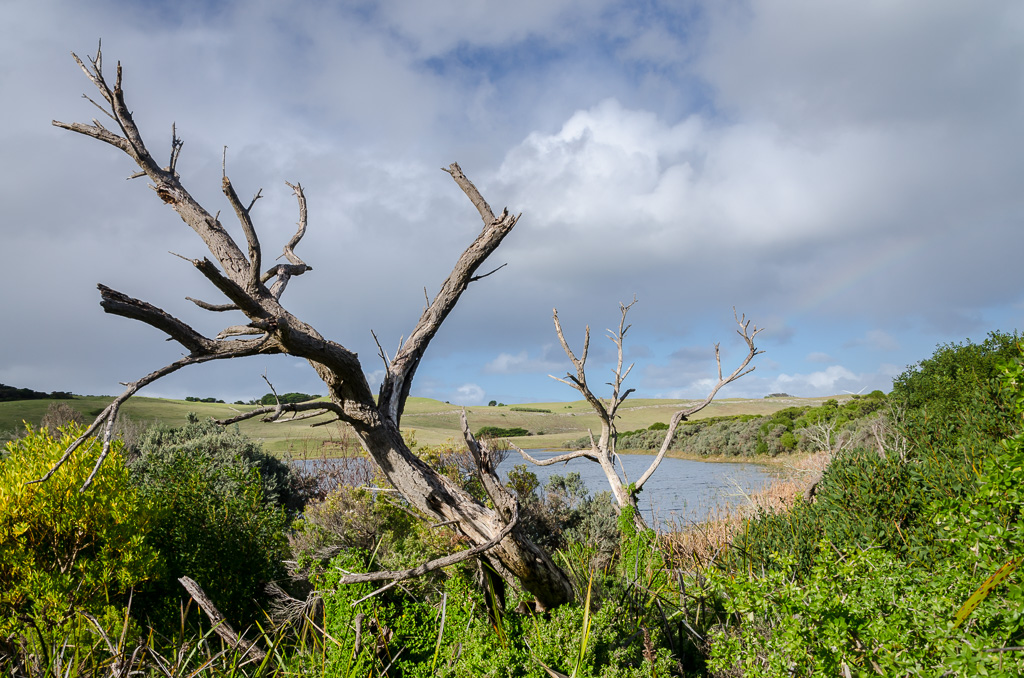 The coastline was now reached and before heading off on the path which climbs the cliff-line I passed a sign that didn’t really make a lot of sense. 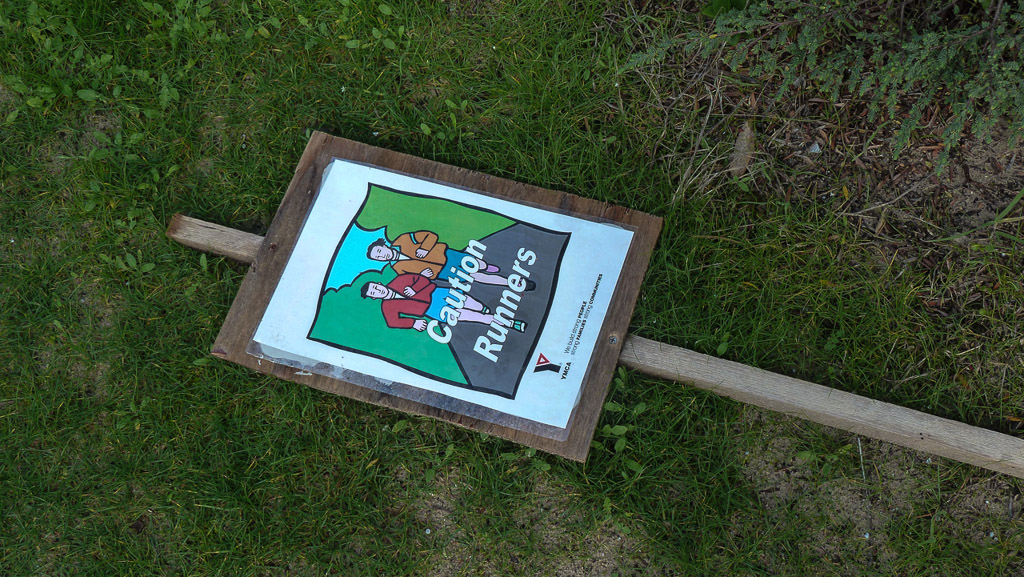 The gradual climb paid off with some handy coastal views… 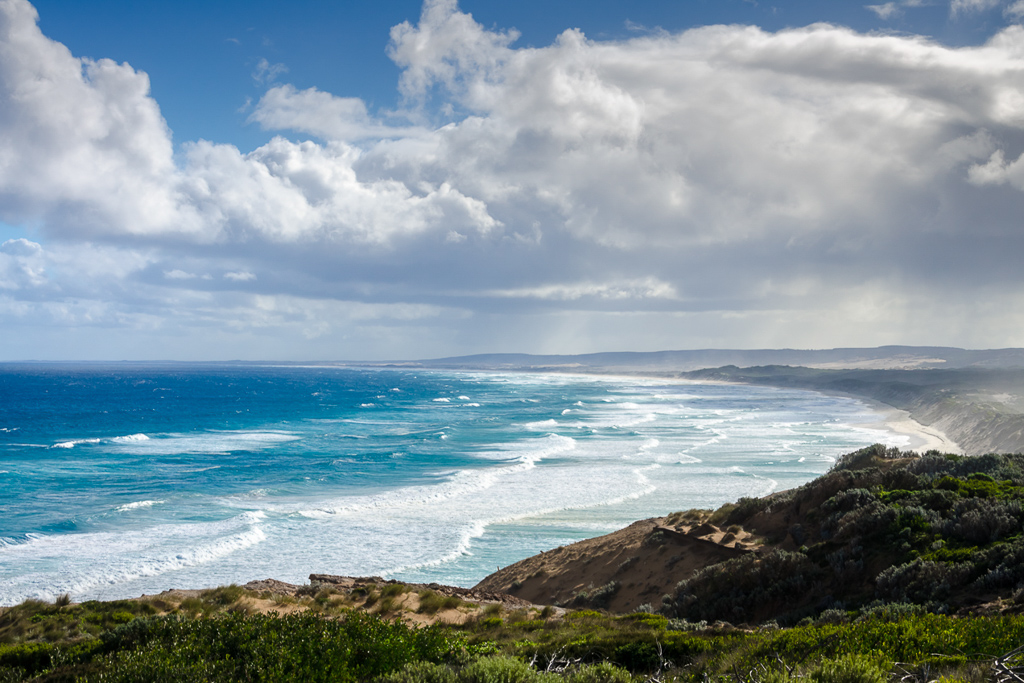 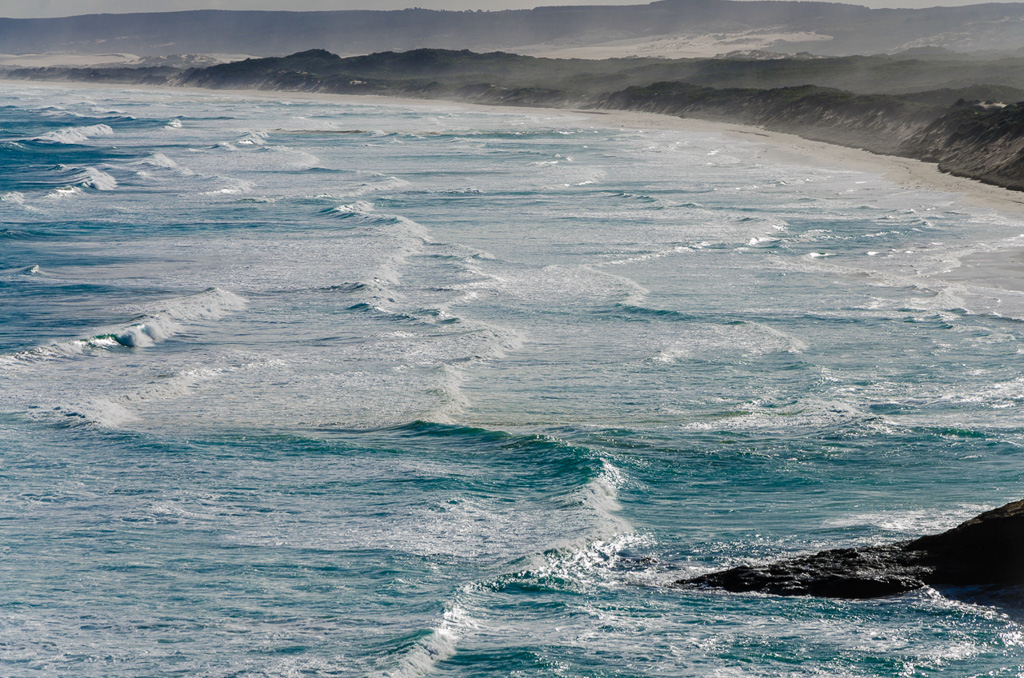 …before descending again towards Whites Beach. What made this little cove interesting was a long, white object washed up on the sand which guaranteed we’d have to head down for a closer look. 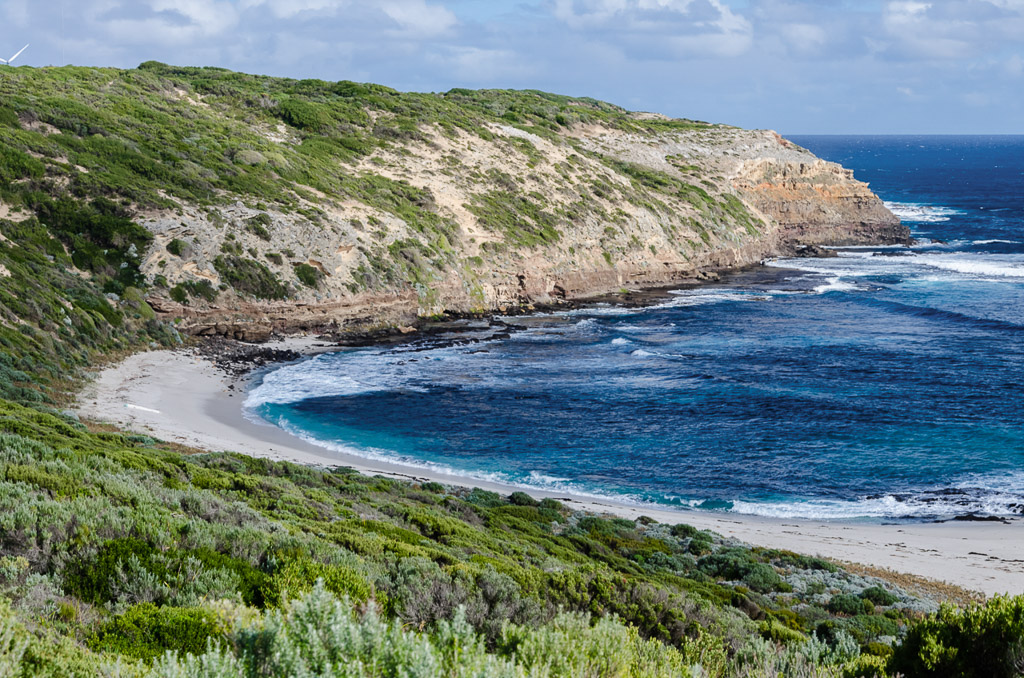 Initially we didn’t realise that this spot has a piece of morbid history attached to it. In 1851 a ship called the ‘Marie’ sank off shore with the loss of 29 lives and we stumbled across a well-weathered memorial on the way down to the beach. 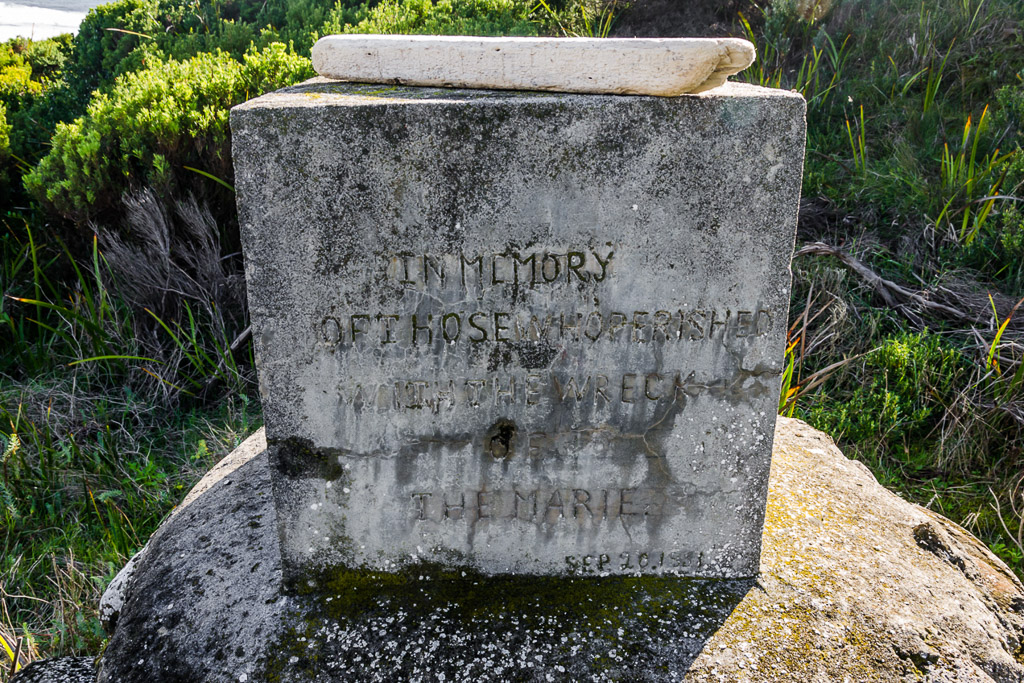 A bit of online searching (is my computer stupid? Online isn’t a word? Suggests I wanted to say ‘Leonine’ instead?) didn’t come up with much regarding this shipwreck. The best I could find was this handy write-up called the ‘Guide to the Historic Shipwreck Trail on Victoria’s West Coast‘ which does include the ‘Marie’ in it.

We reached the beach and strolled over to the mystery object… 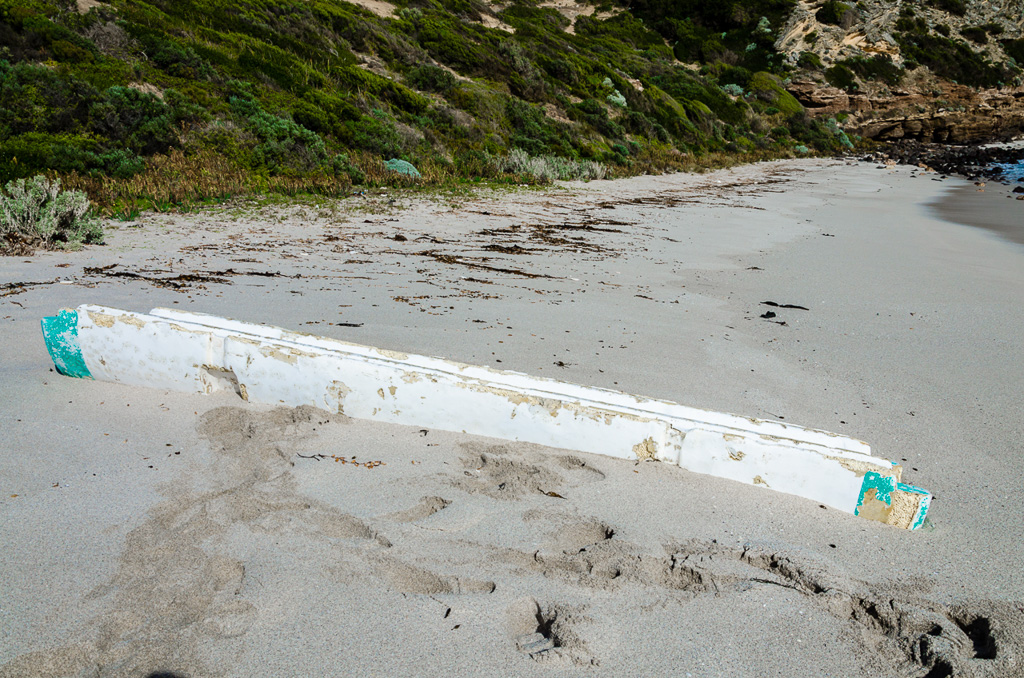 …and concluded we had no idea what it was. Some sort of flotsam/jetsam, piece of a boat type of thing? It was an unsolved mystery, but before leaving there was one more thing that needed to be done. Smuffin had a tent fixing idea, so he cut off a piece of washed up rope which would be utilised for repairs later on. 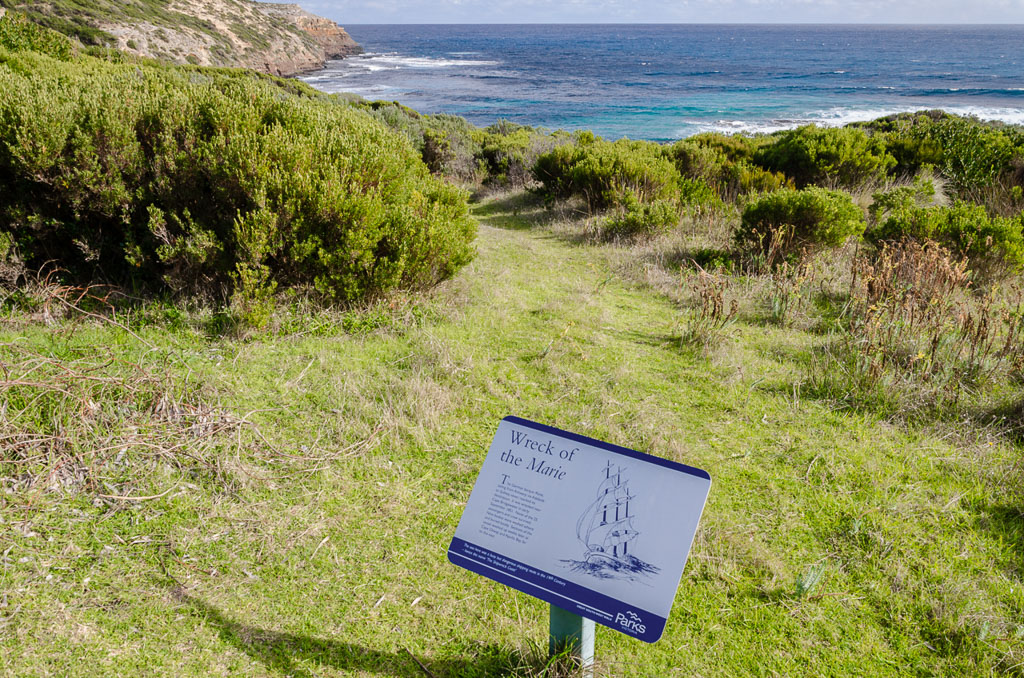 …and then strolled along some new looking path-work on the cliff-tops. 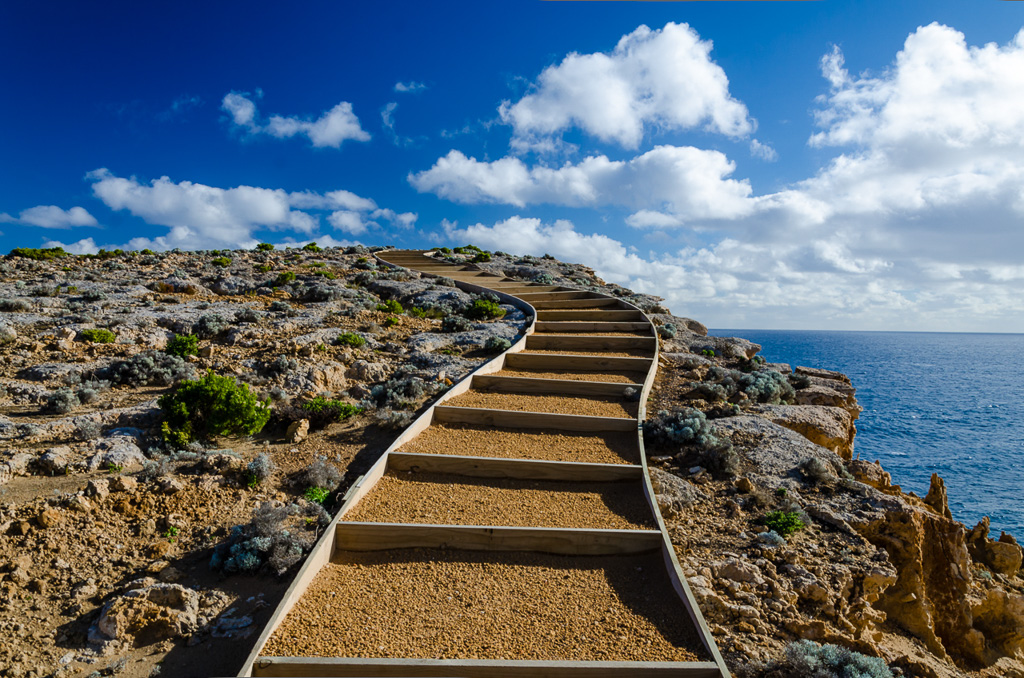 Then a little bit further on we’d reached the Springs camp, which on reflection I liked the most of all the GSWW campsites. Still high on the cliff tops, but set back in a sheltered position, it was definitely a winner.

Oh yeah, don’t even think that’s it for the day, as there’s plenty to come. We’d been in the sun for the day, but rain was still around. At one point a very vibrant rainbow appeared in the late afternoon and I loved it so much I’m going to overdose on the photos of it. 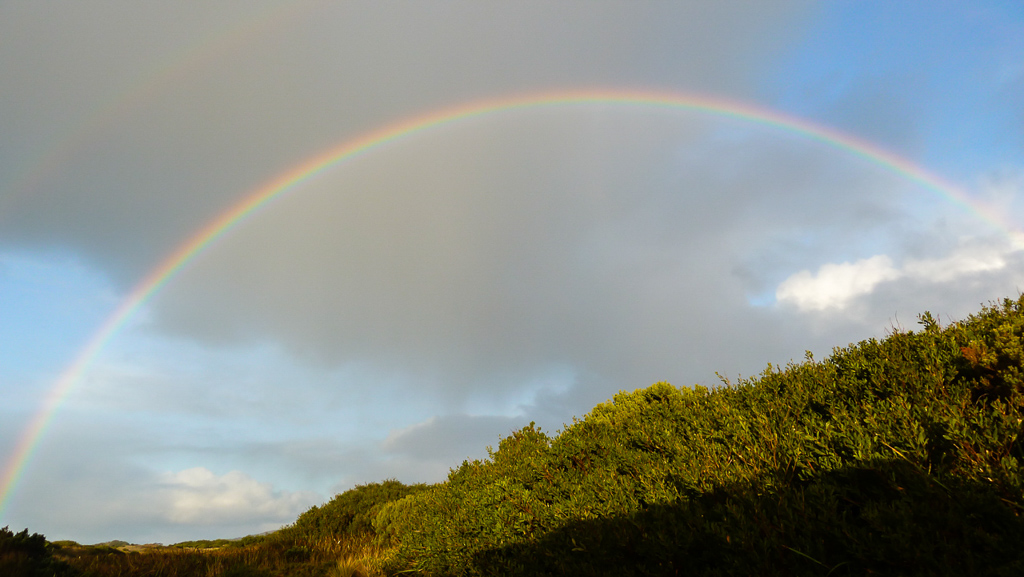 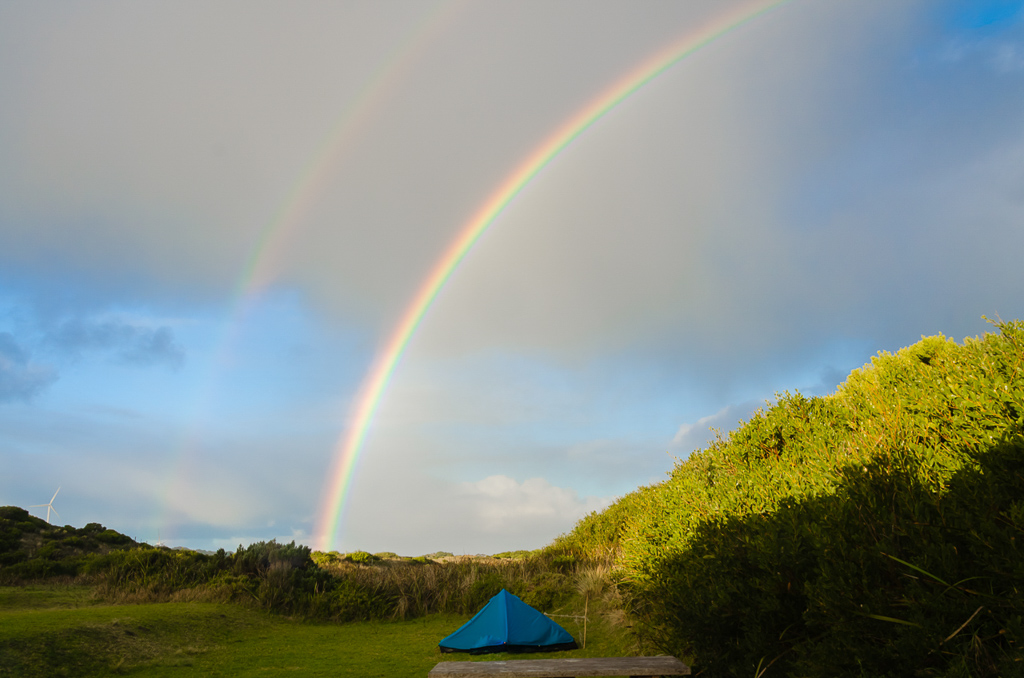 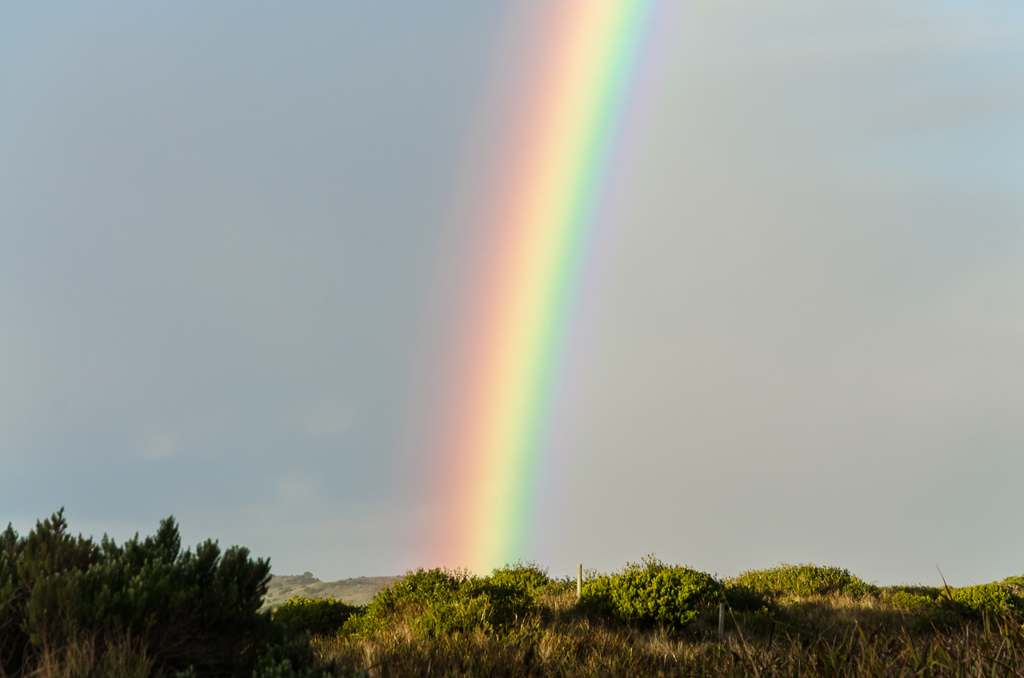 The coastline was only a short distance away and Smuffin went off exploring. He returned a little later informing me I should get off my arse and join him at the cliff-tops. I dragged myself away from the comfort of the campsite shelter and found that the sights of the ocean were very impressive. Strong winds and a large swell was creating some reasonable waves that thumped against the rock outcrops… 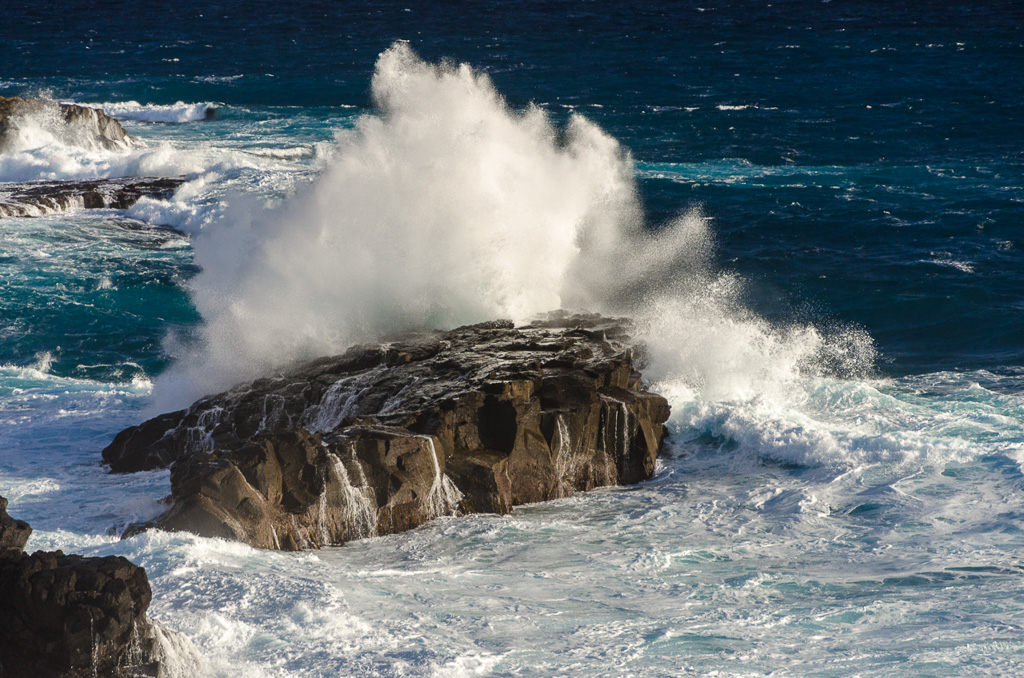 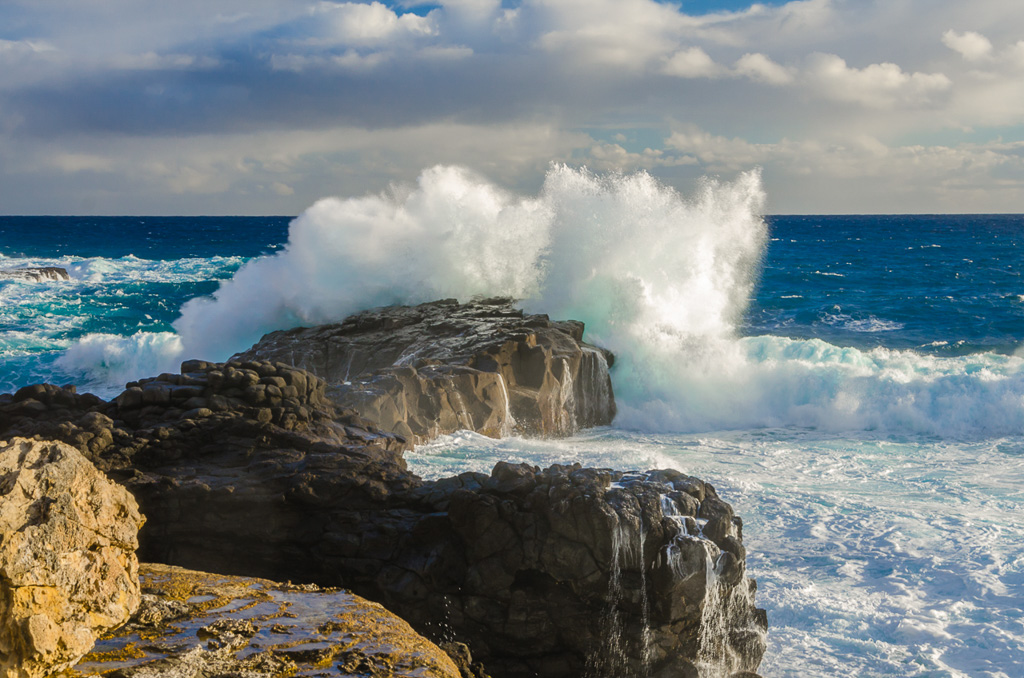 …and whilst pottering around we discovered where the name the ‘ Springs’ came from. It seems hard to believe, but in the ‘ye olde’ days cattle were allowed to roam across the cliff-tops. An old man-made ramp was visible where the cattle would be brought down to a natural spring coming from the rocks. This was close to the ocean, so it must have been interesting having cattle strolling around on the uneven rocks.

Smuffin and I found the spring and concluded that the water was fresh to taste. There’s not much information of where the spring is, but it can be found with some exploring. 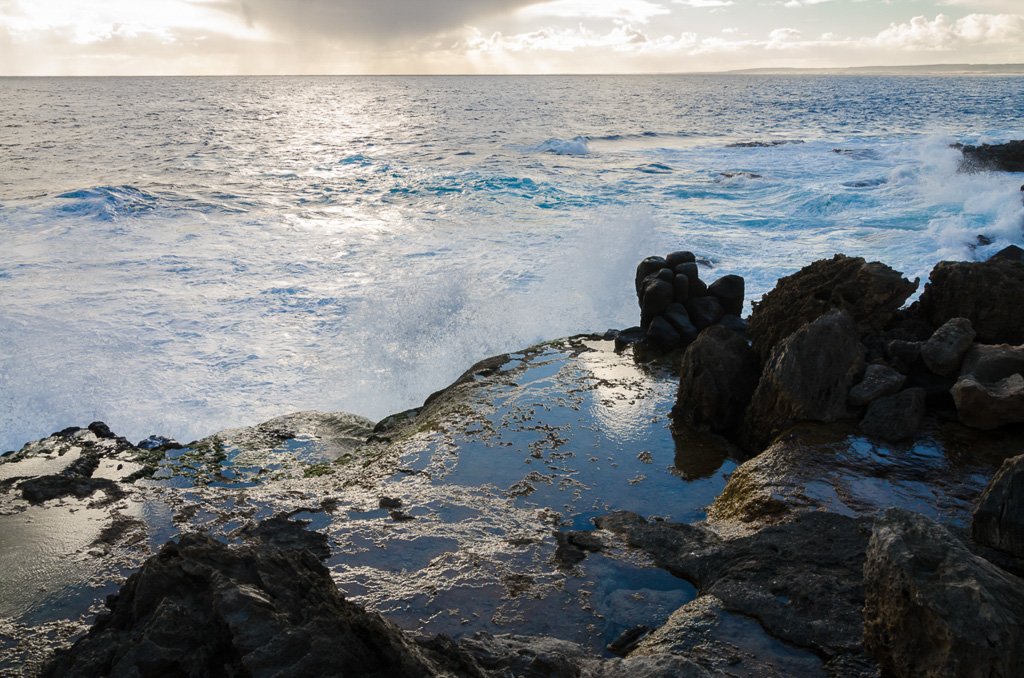 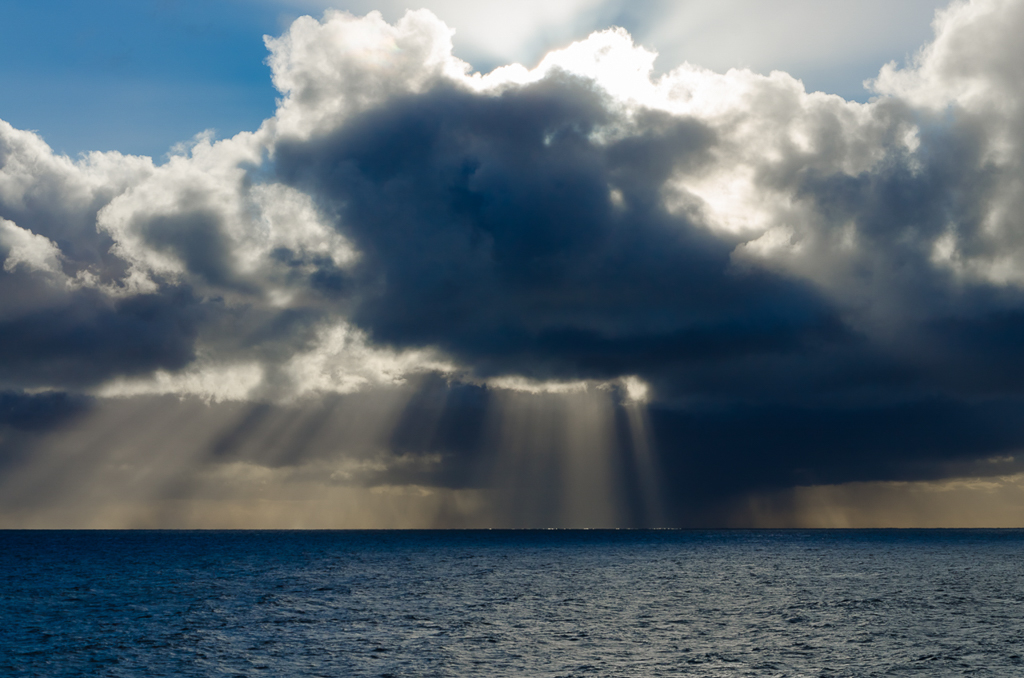 We spent quite some time pottering around and watched the sun set before returning to the camp when it became a bit too chilly. Finally, to finish off the day there was the rudimentary tent-fix. The recovered rope… 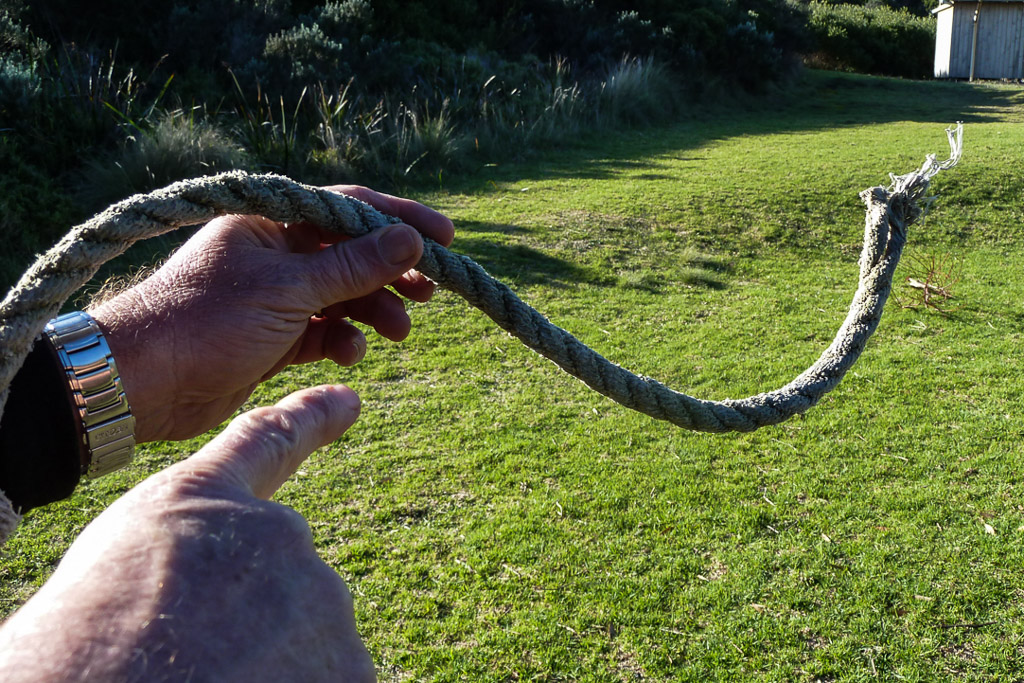 …was unravelled and connected via Smuffin’s handmade walking stick to the corner of the tent where the line-lock had failed. This was as a good a fix as possible. Rudimentary, but effective. 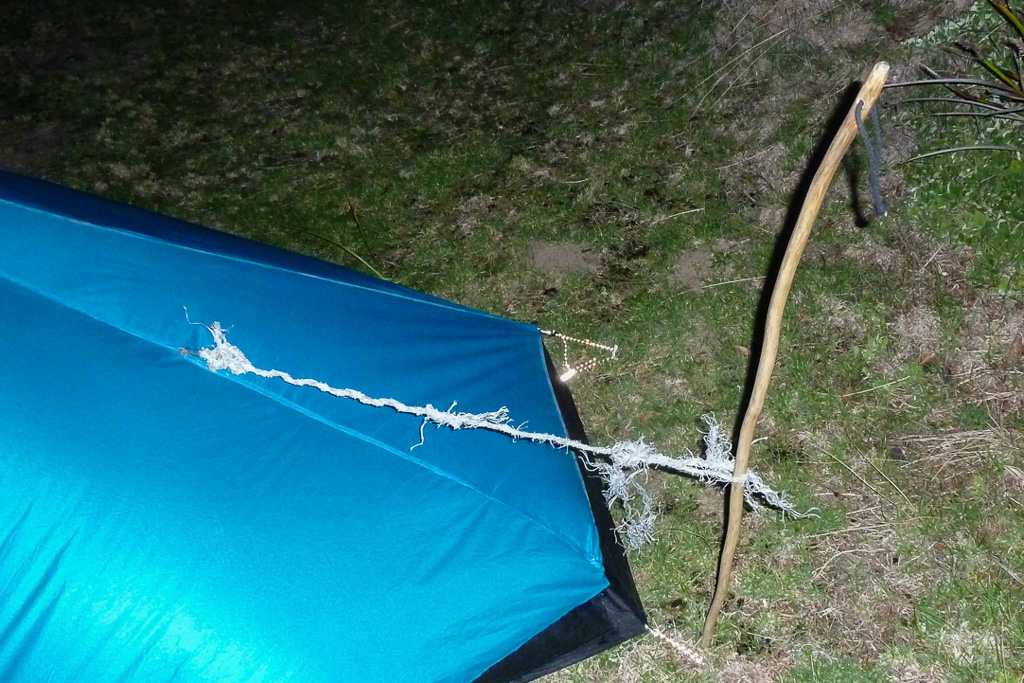 That’s it then. The 12 km leg from Tarragal to Springs, Great South West Walk started out bleak, but in the end the coastal walking was one of the highlights for the trip. So, another day done. Only three days to go and I’m flying along. Sort of… 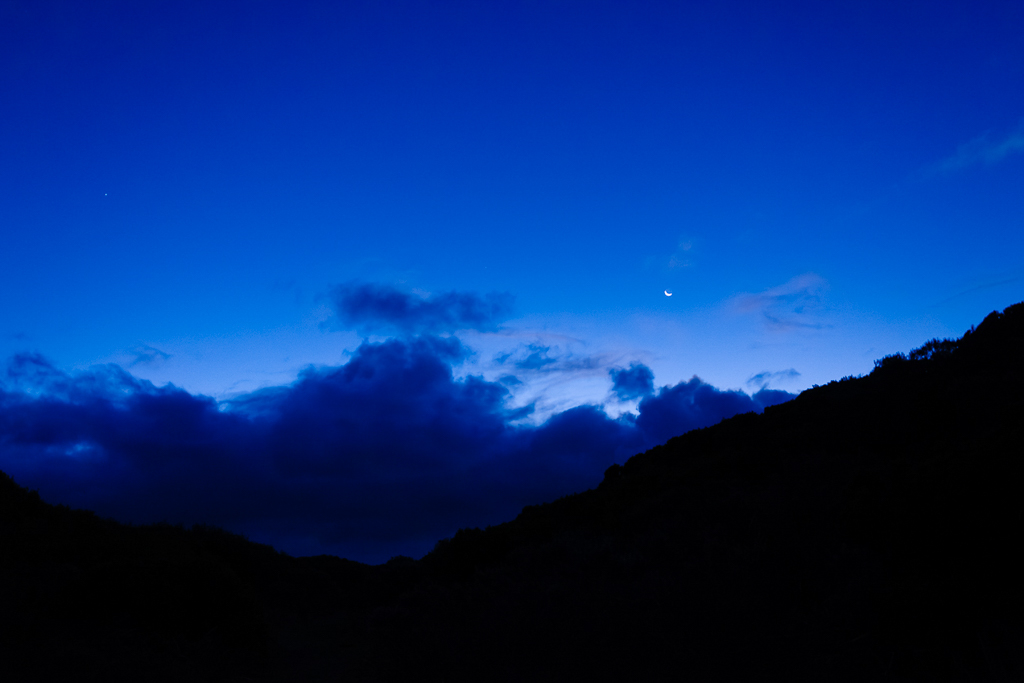