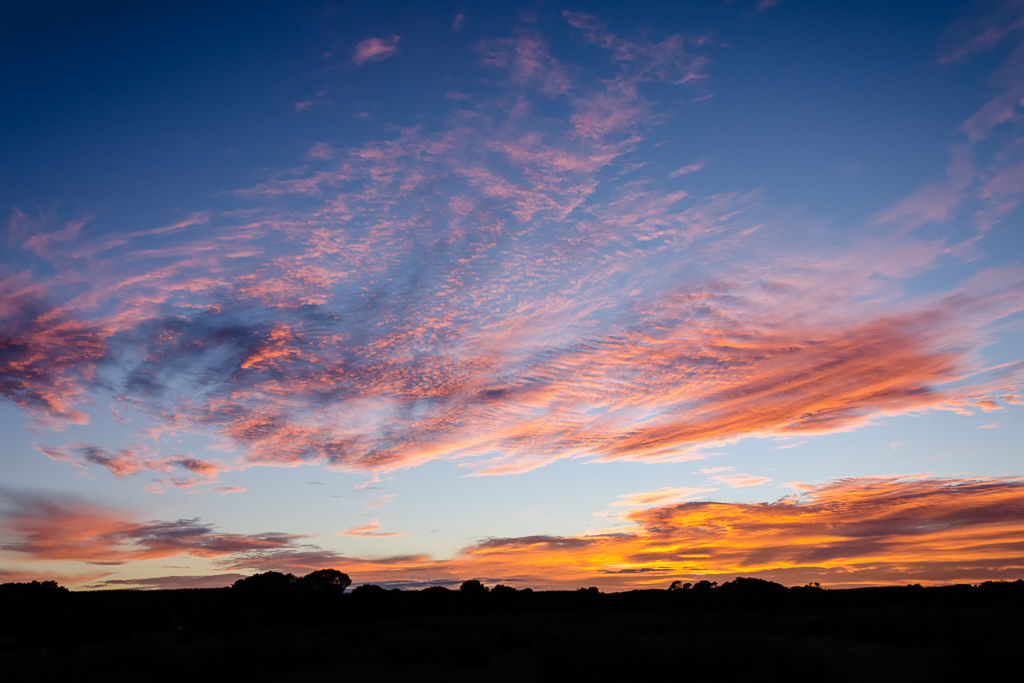 Guess what? Yep, it’s time for another post of the Great South West Walk!! Do you like the double exclamation marks that indicate I’m wildly excited? I’m either leaping into the air giving high fives to the skeleton in the spare room or I’m sitting on the couch in underpants keeping an eye on a small roast in the oven. Both are viable answers, but only one’s correct.

If you’ve wondered at all, I have actually been doing some walking this year, but I’m trying to wrap up this eternal GSWW saga once and for all. Mind you, the latest walks haven’t exactly been world beaters, as I’m not a fan of ‘spontaneous combustion style’ walking and this to me seems like a warm summer. As Shakespeare said, “Stick thou hot weather up thine arse”.

Before I start though, I’ve got to get a few things out of my system. Oh yeah, don’t even think that I’m not aware that what is to follow isn’t minor in the overall scheme of life and maybe I should get out more.

Okay, firstly I’m getting a little tired of advertising emails which are addressed to me, but somehow they spell my name wrong. How hard is it to spell ‘Greg’? Why do they have to call me ‘Geg’? A ‘Geg’ sounds like something beer would go into if you had a speech impediment.

What else? I’ve noticed lately that a bit of ‘American English’ has popped up with both ‘flavour’ and ‘colour’ appearing having the ‘u’ dropped. The outrage! I’m finding this a little disappointing, as Australians have fought and died for our vowels. On Australia Day I like to go to the beach wearing the Australian flag as a loincloth to show my patriotism. Just wait until next year, I’ll be bringing placards saying ‘save our vowels’ and waving them in the faces of anyone who appears to have been born overseas. Mm… I guess that’s everyone with white skin?

Next up. I do a lot of reading every day. Mainly the ‘Shop A Docket’ specials on the back of receipts and the latest tags spray painted on my train carriage when going to work. One thing that I’ve noticed is in online forums where someone uses either the word, ‘period’ or ‘fact’ at the end of sentence.

It seems to infer that what they’re saying is somehow more worthy of anything else in the forum? If you don’t know what I mean, it’s used like, “I have a head like a pumpkin. Fact.” Or, “There’s nothing better for a bloke to wear in summer than fishnet stockings. Period.” How annoying is that? Is there any chance of those words being abolished in the future? This leads me onto my next thought.

Wouldn’t it be great if there was a National Backhander day? One allocated day a year where you can legally assault anyone who’s driven you nuts for the previous twelve months? There are rules though, such as no knives, guns, explosives, clubs or closed fists. Just a good, solid ear-warming backhand.

Okay, a few more rules. Men can’t hit women, but women can hit as many blokes as they want. Hell, there’s so many blokes who need a slapping, I’ll need the women to help me out. Also, there must be a size difference. No belting someone half your size. Can you imagine being down the beach and seeing some tool wearing an Australian flag as a loin cloth? Who wouldn’t want to give him a backhander? My first target though would be all of the ‘period’ and ‘fact’ users I can track down. If you’re still not sure what I mean, here’s some photos as an example of how it’s done. 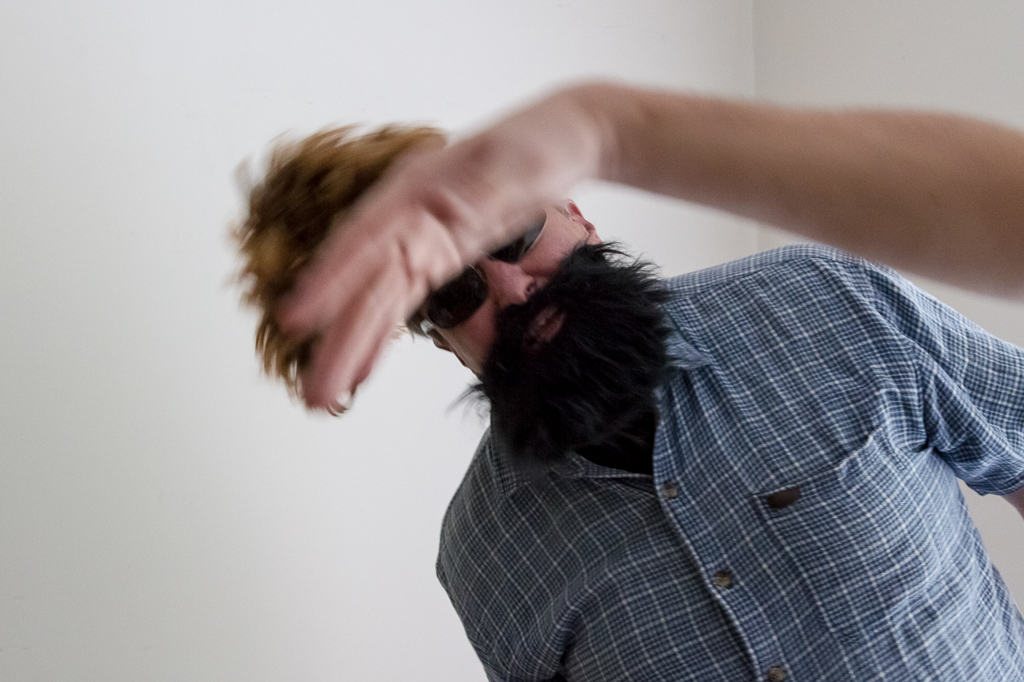 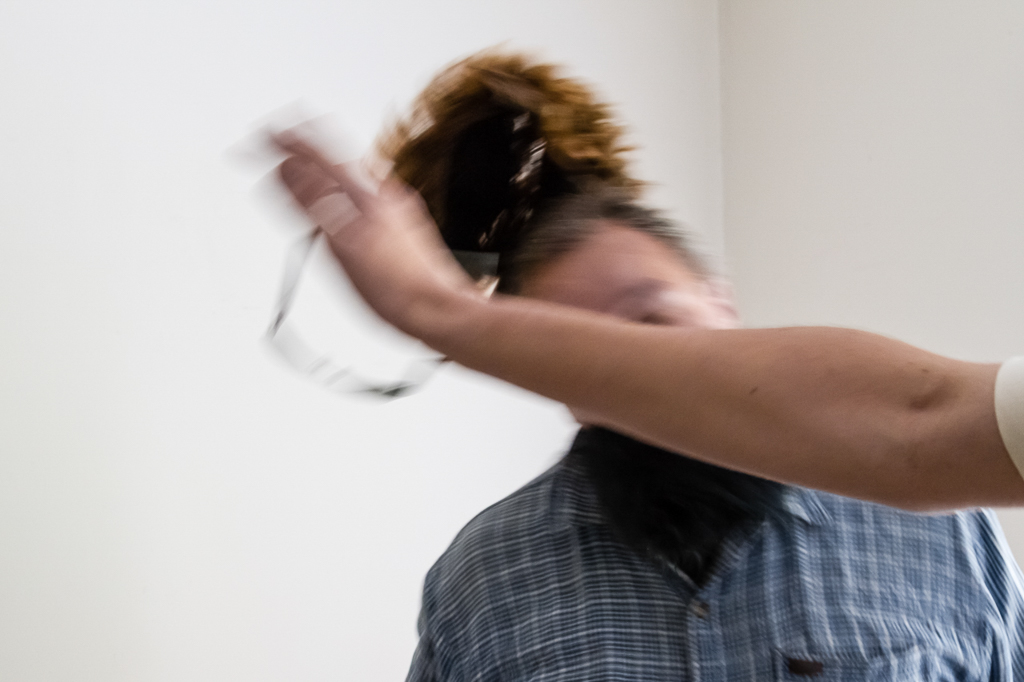 See what I mean? Don’t think that blogging is easy. I’ve just spent 30 minutes getting assaulted for the purposes of this post. 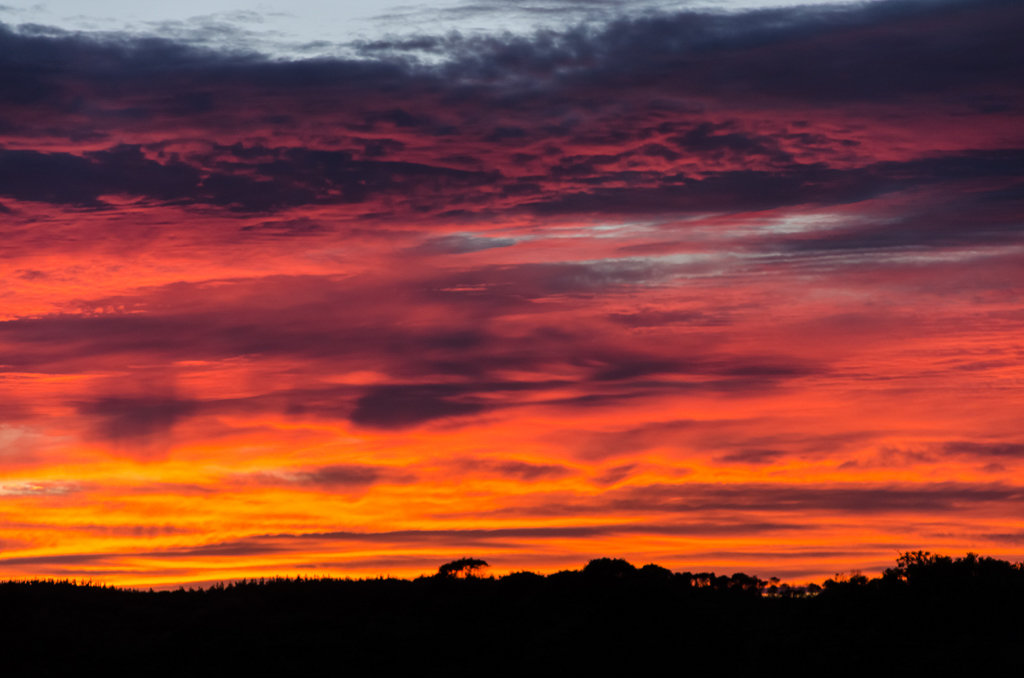 Back to the walking? Do I have to? Okay then. This next section of the walk from Lake Monibeong to Swan Lake was one that snuck up on me. Somehow I’d thought the beach walking had finished for the trip. I guess I should look at the map more often, as I was mildly stunned when Smuffin proclaimed that there was a 20 km day of sandy strolling to come. This is never ideal in Winter with the short day, as one can’t wait for the firmer sand at low tide.

It wasn’t all bad though. As Smuffin had done a food drop at Lake Monibeong we’d have to return at the end of the hike and pick up his plastic tub. This meant I could leave my ‘treasures from the deep’, consisting of the motorcycle helmet, flipper and fishing buoy in the bushes for collection later. That was a drop of 3 kg of pack weight straight away.

It was a quiet night near the lake and I woke up before sunrise. This was a bonus as there was a fearsome blood red sky to photograph. Mm… I wonder if it was going to rain later? I took zillions of photos and they all look quite similar to what you’ve seen in this post so far. Here you go. Have another one. 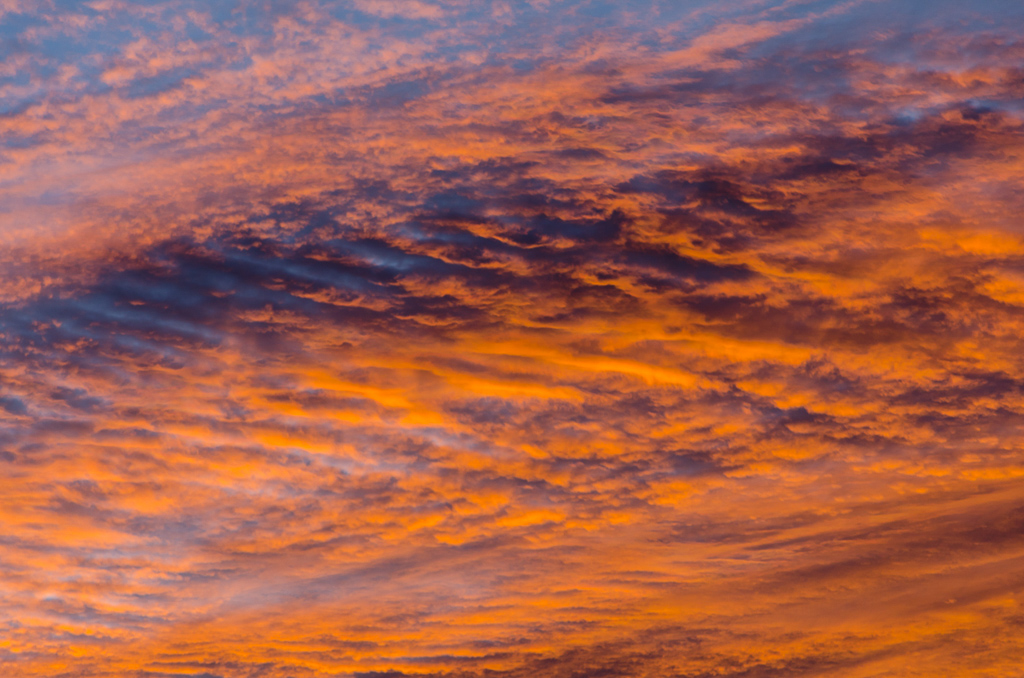 When it was well and truly daylight, we headed down to the beach… 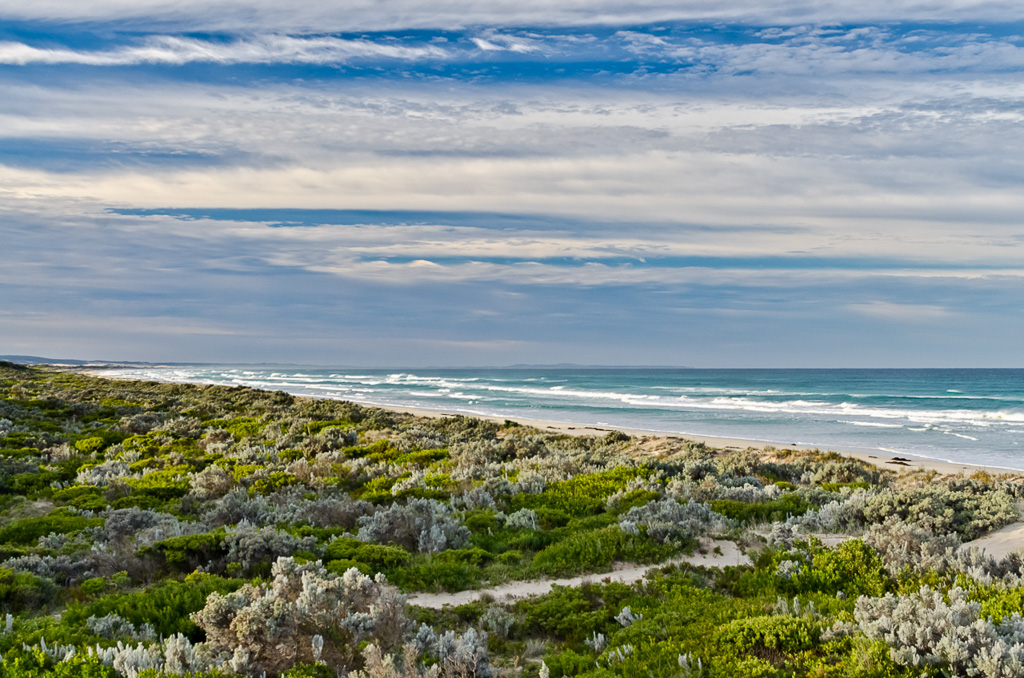 …and initially found the sand quite firm. 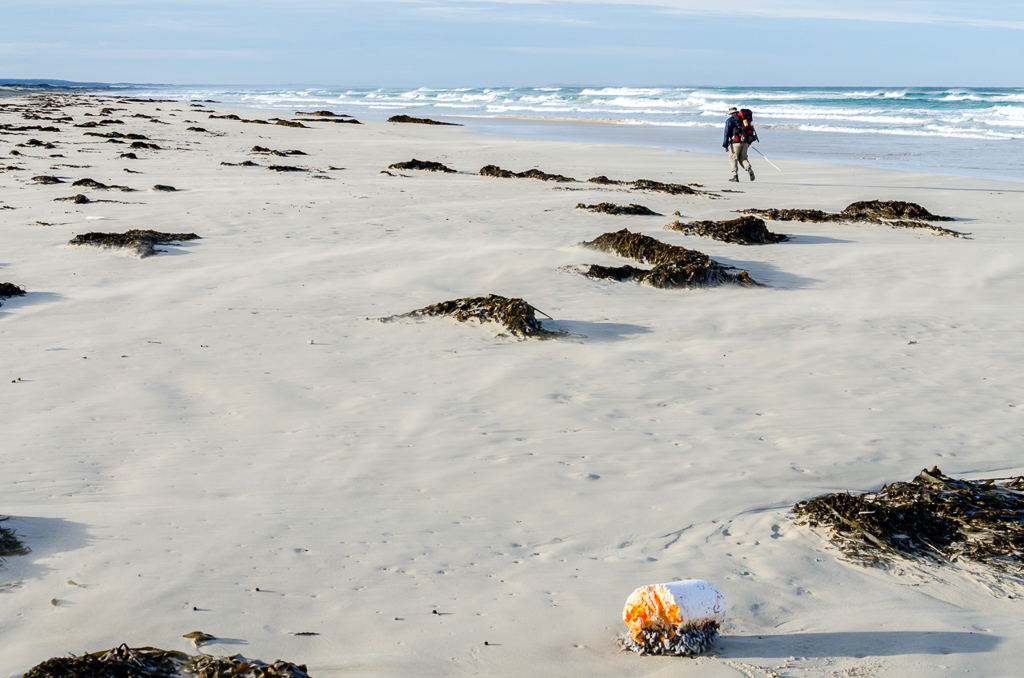 It wasn’t too bad early on, but there’s one deceptive thing I find about beach walking. If I didn’t have the GPS I’d have no idea how far we’d travelled. A featureless horizon never seemed to get any closer, but more disturbingly, a headland we’d initially descended to the beach on, didn’t seem to get any further away! In the end, I forced myself to not look back, as it seemed we’d barely moved after a few hours of walking.

That ‘red sky in the morning’ caper certainly was coming true, as it seemed rain was on its way. Thankfully it was holding off, as beach walking when it’s pouring rain is always a disappointing experience. 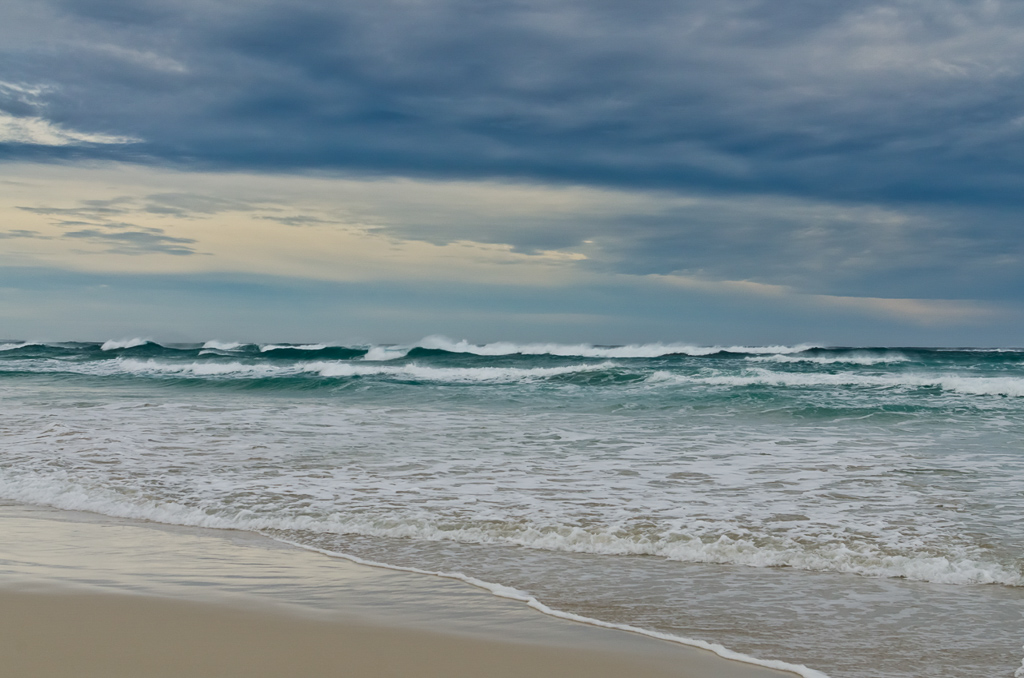 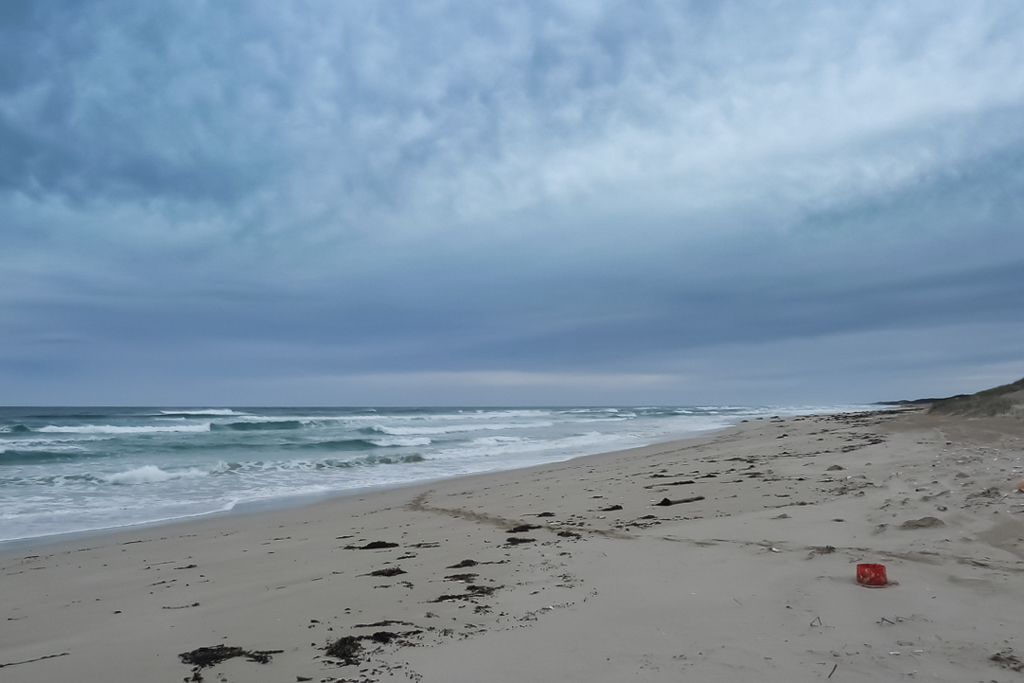 Even though it was slow plodding, there was plenty of objects on the beach to examine. Again there were some well defined paw prints… 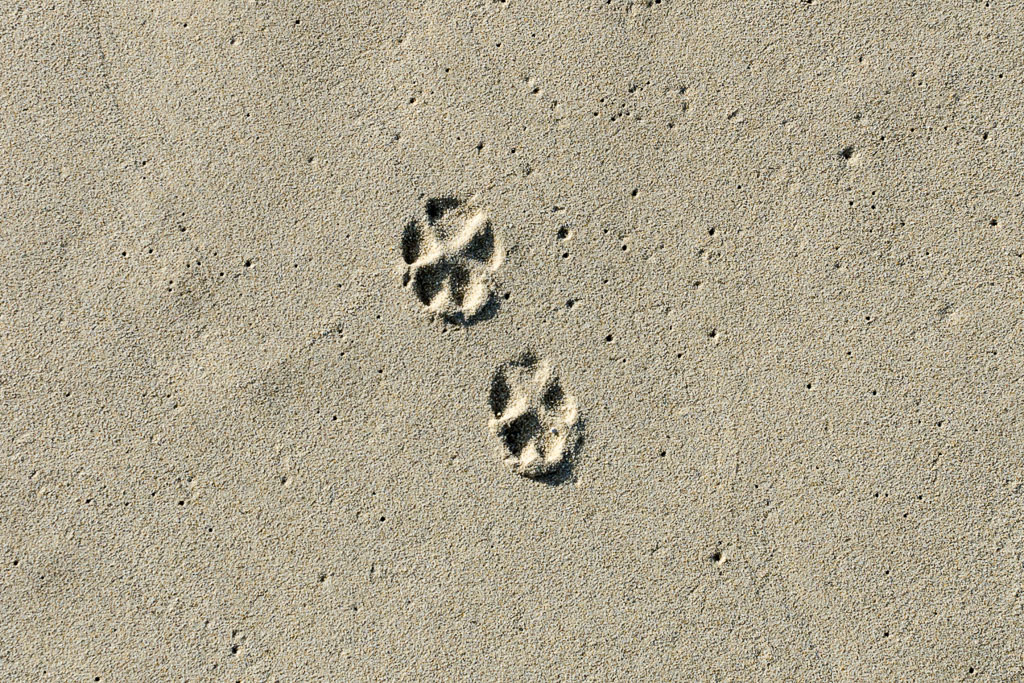 …and even more exciting. Another helmet! This one was the same as the last, but with a distinct advantage. It still had its chinstrap which was perfect for securing to the pack. Where did they come from? I assume it was from a container lost at sea somewhere? 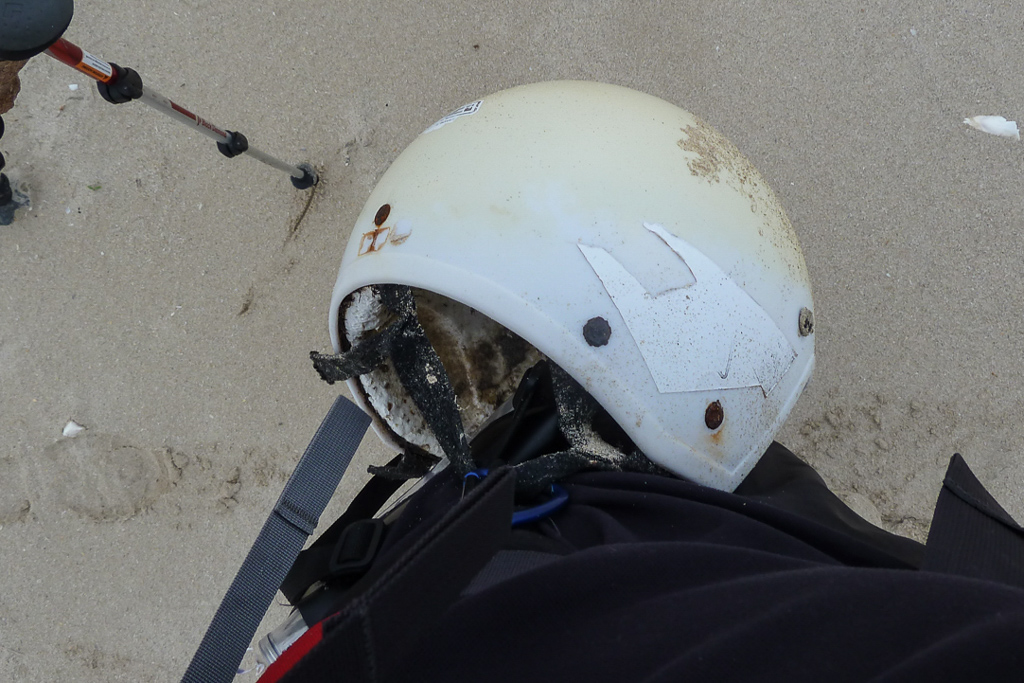 Another day, another helmet.

How many helmets can one man have? I kept my eyes peeled, but unfortunately it was the last one I saw for the day. 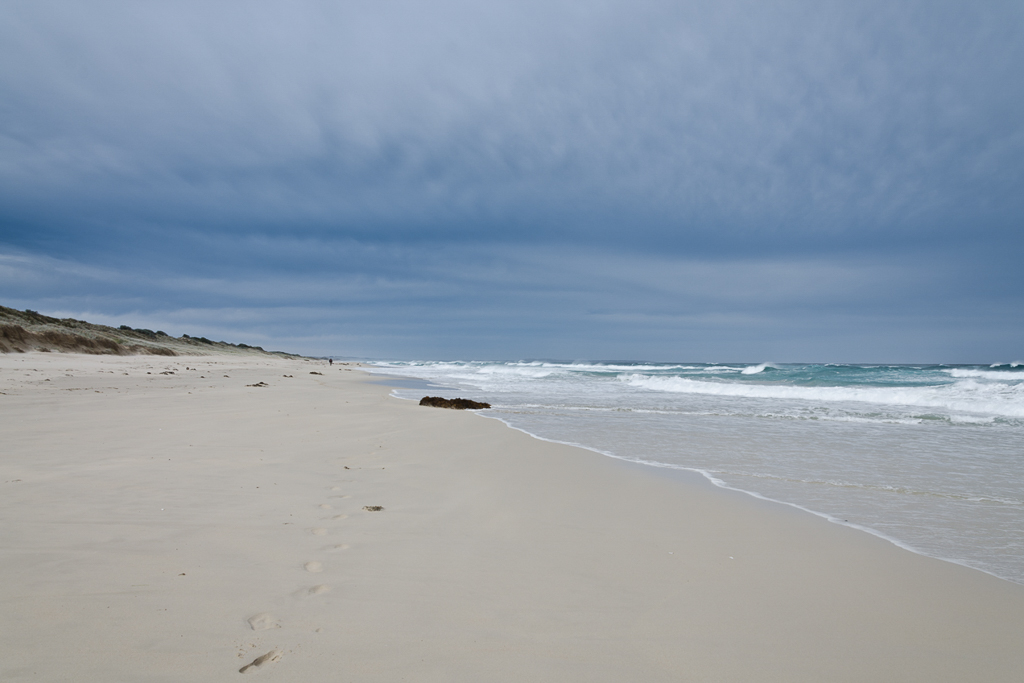 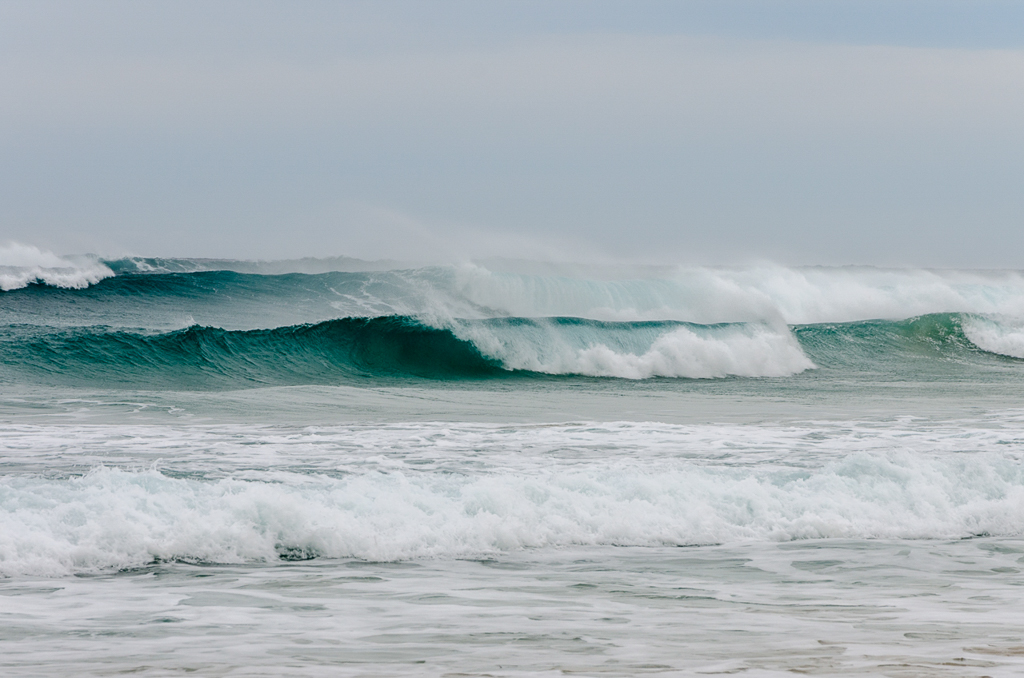 …when I had a slight accident.

The tide was coming in, so our firm sand at the waters edge was rapidly disappearing. I was still trying to hug the remains of that sand though, but with a wide, flat beach the waves would sweep in a fair distance, necessitating a bit of timing to avoid getting the feet wet. 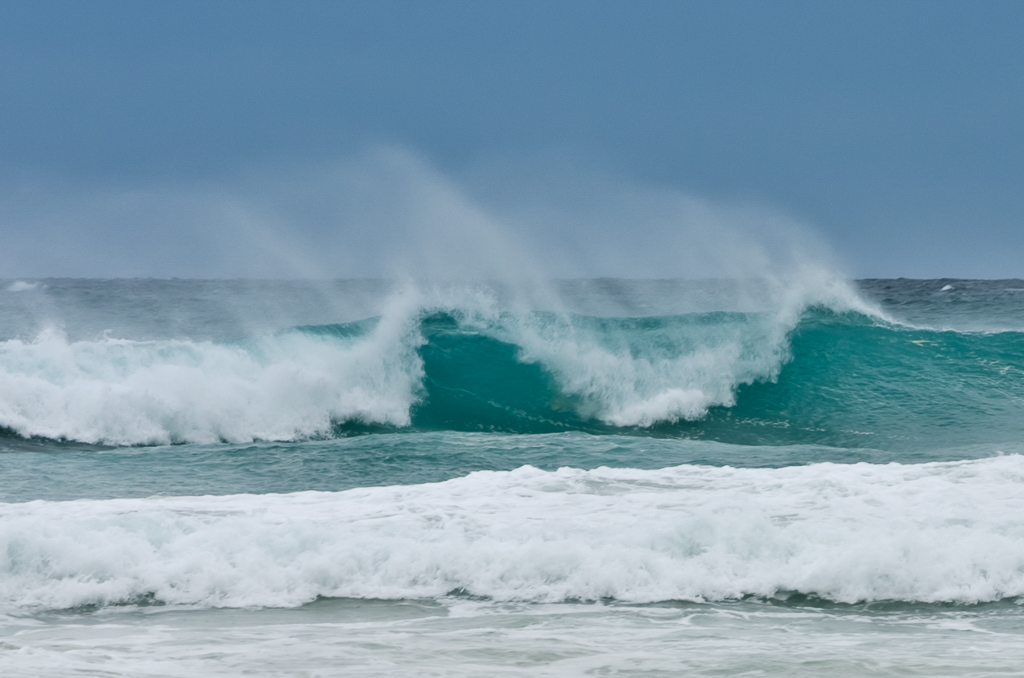 …when a wave swept in, catching me off-guard. I was watching the water and began running whilst looking at the water over my right shoulder when, guess what? I ran into a speed hump, which just happened to be a huge clump of seaweed and down I went. Here’s the result. 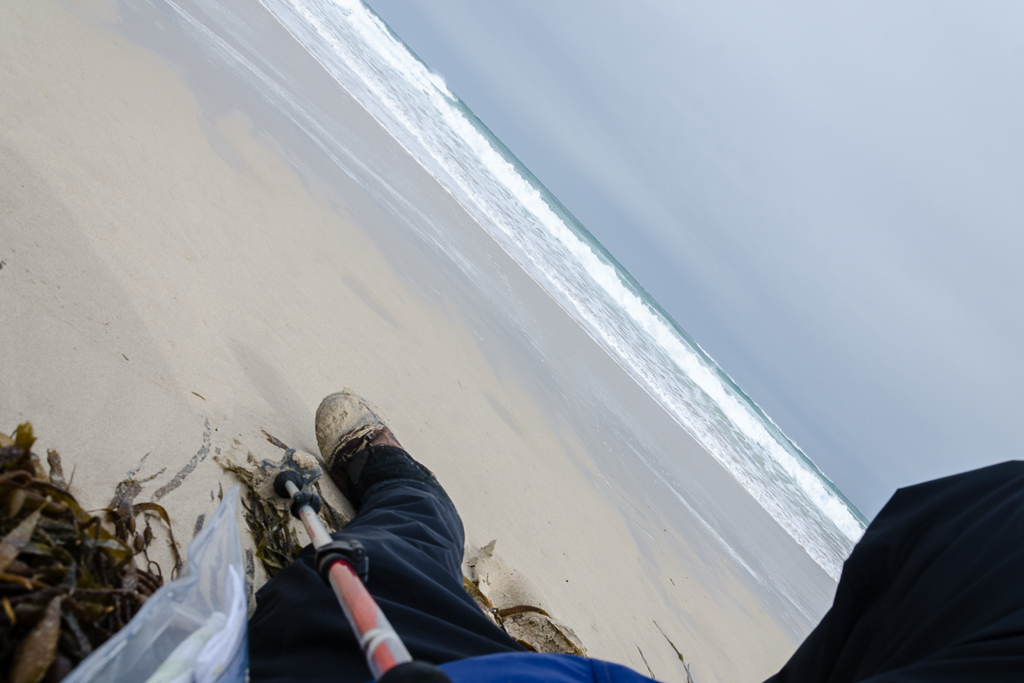 Relaxing on some seaweed.

Although this seaweed smelt like a combination of rotting eggs and a corpse that had been left inside a sauna for a week, it wasn’t too bad, so I spent some time relaxing. This of course made no sense to Smuffin.

He was hundreds of metres ahead when I hit the deck, so when he looked around to see what I was up to, he was surprised to see I’d vanished. For all he knew, I may have been abducted by aliens, but all he thought was, “Don’t tell me I have to turn around and go back to find him?” Sympathy is not our strongest point when walking.

I eventually clambered to my feet and continued, admiring some more beach litter. Remains of fishing gear seems to be the popular choice on these beaches. There were tubs… 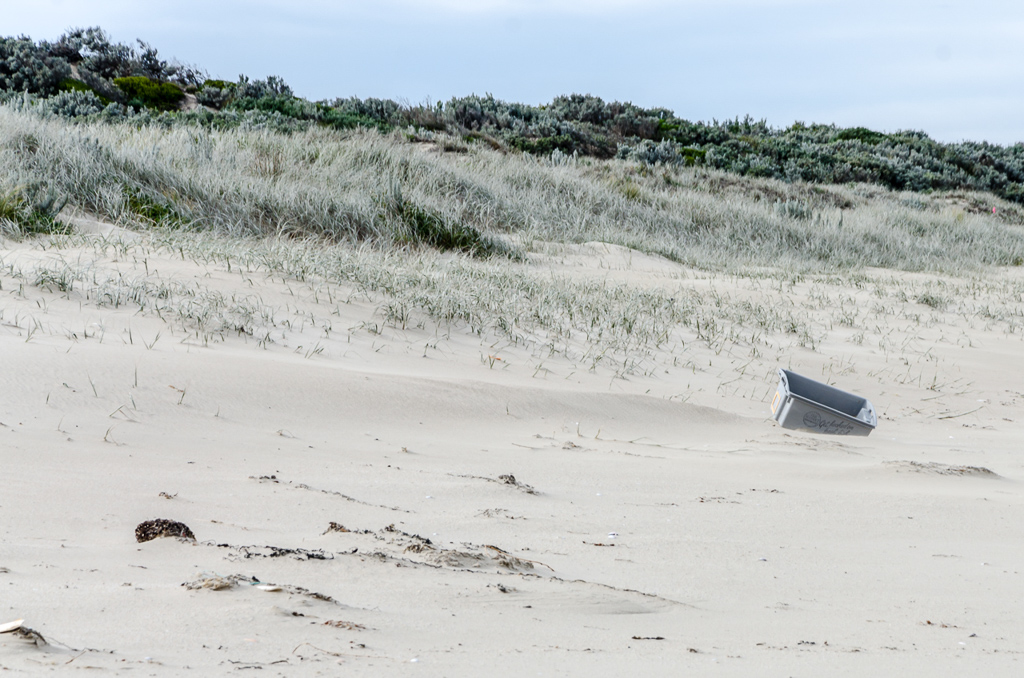 …and buoys that appeared to have been in the sea for a while. 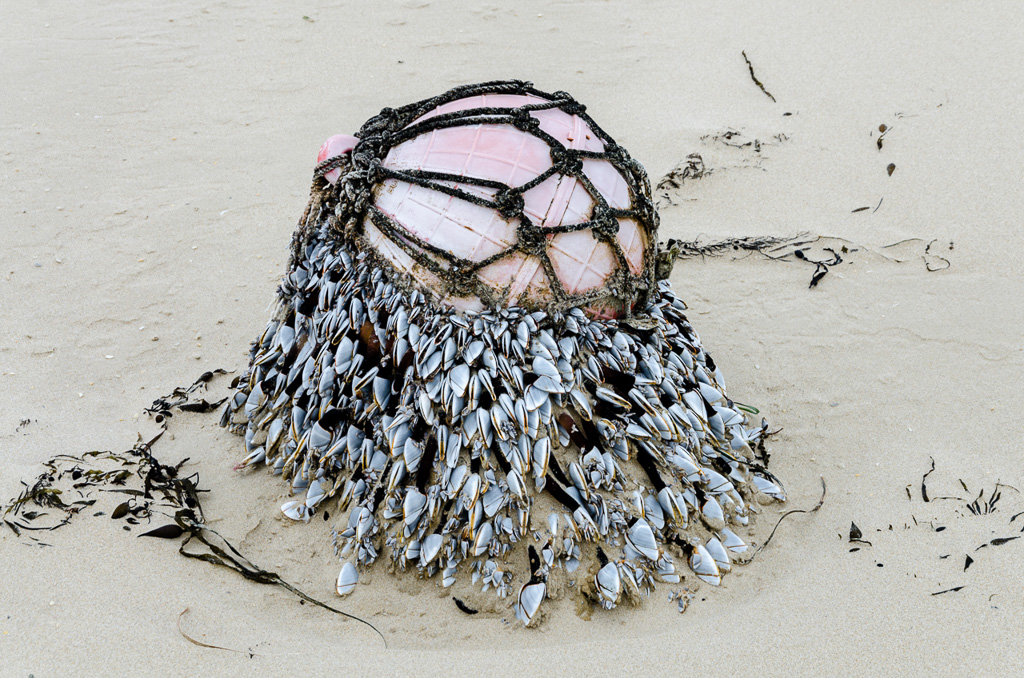 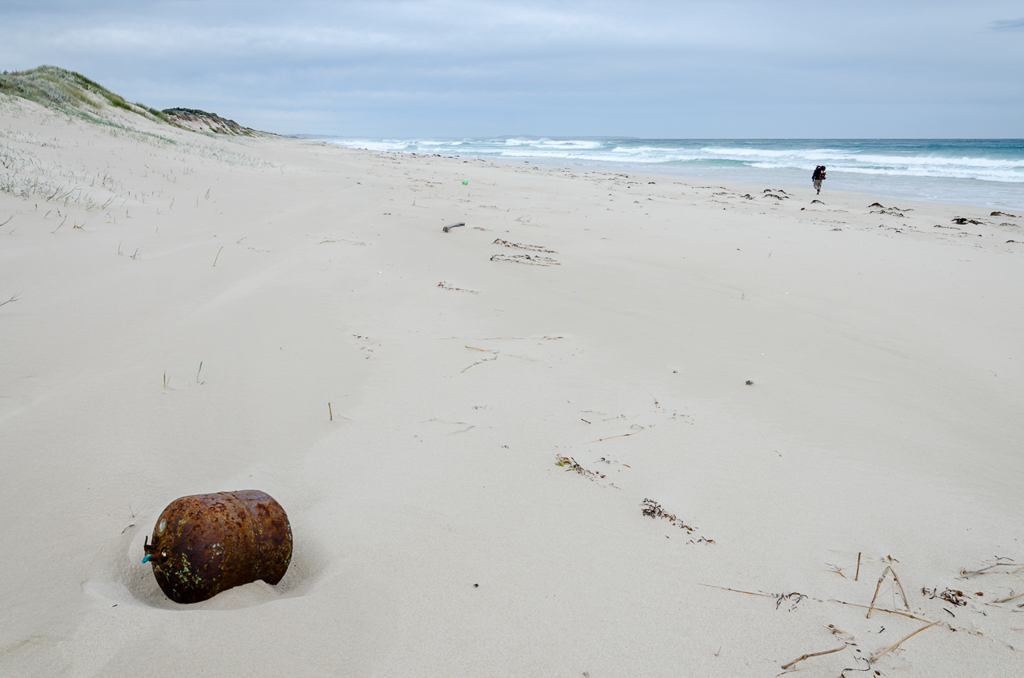 Plus, the occasional windswept drum. 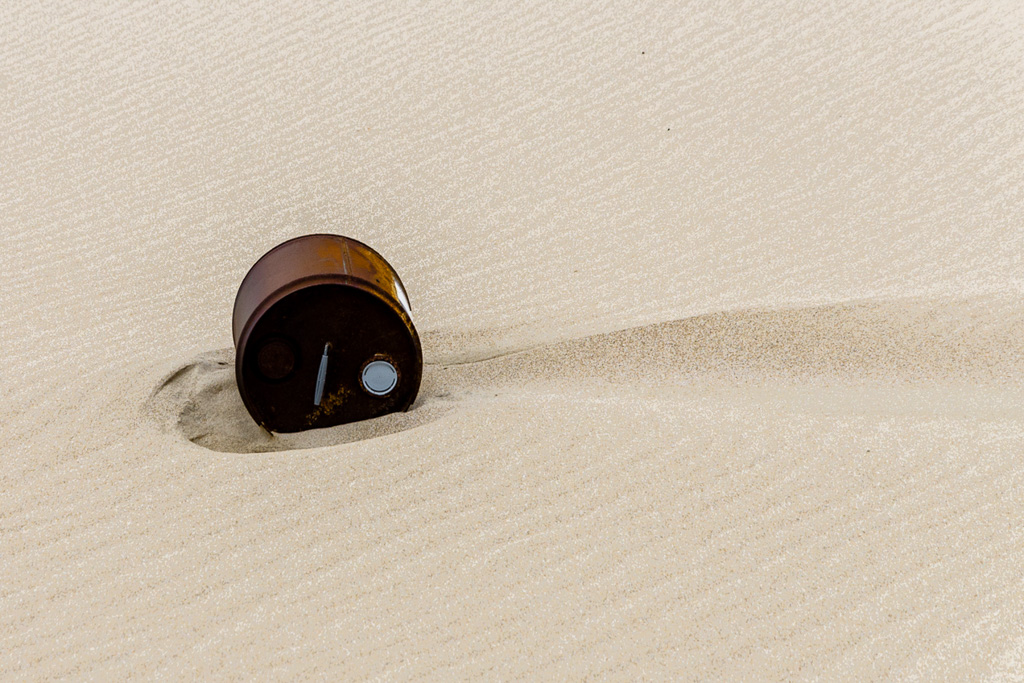 You know what? This looks like a breeze, but we were feeling absolutely stuffed. The sand was soft for at least 15 km and the motivation was wearing thin. I found myself barely moving and we were more than happy when finally the signage appeared to get us off the beach and head for camp. 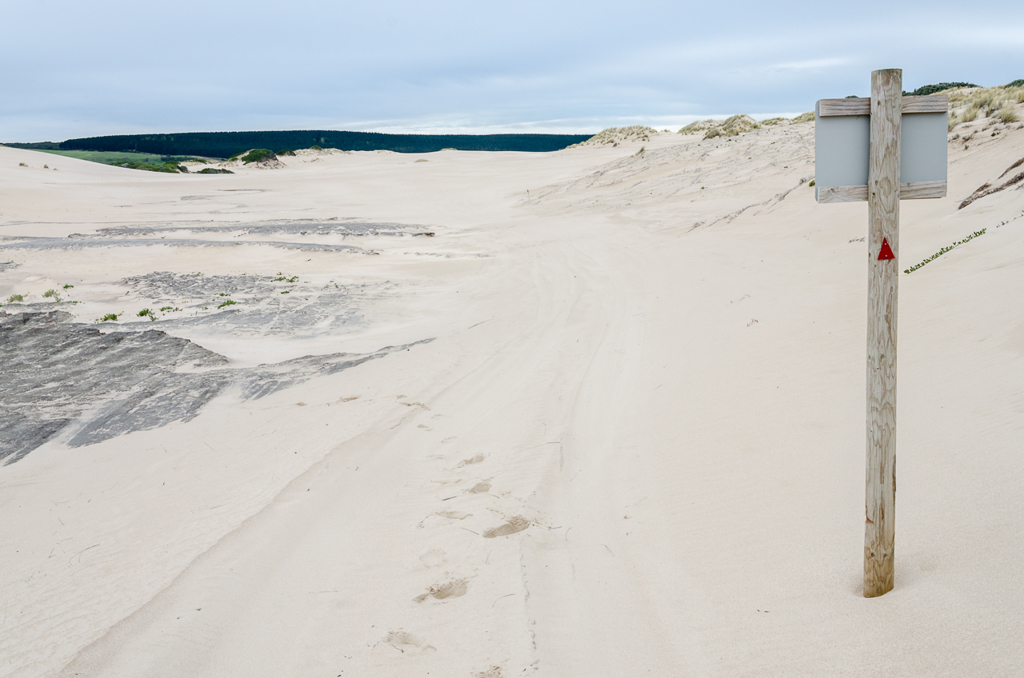 It was deceptive though, as we entered a vast bowl of huge sand dunes which are apparently worked over by dune buggies in the Summer months. Thankfully for us, it was all quiet, but it was an eerie place, as we continued amongst the vast sand dunes with the sound of the ocean receding. 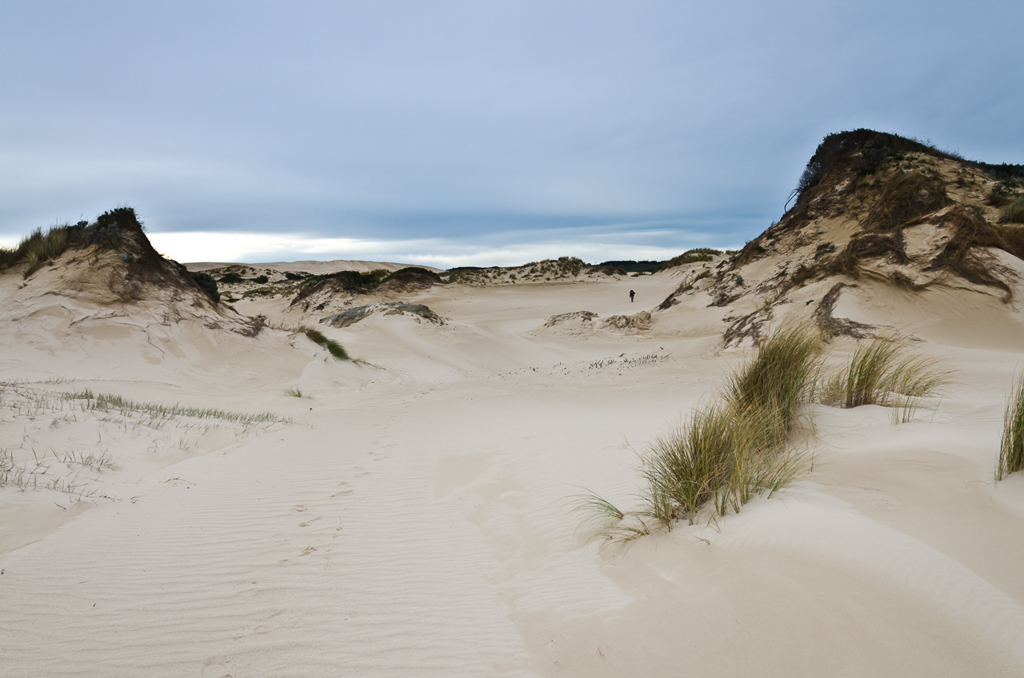 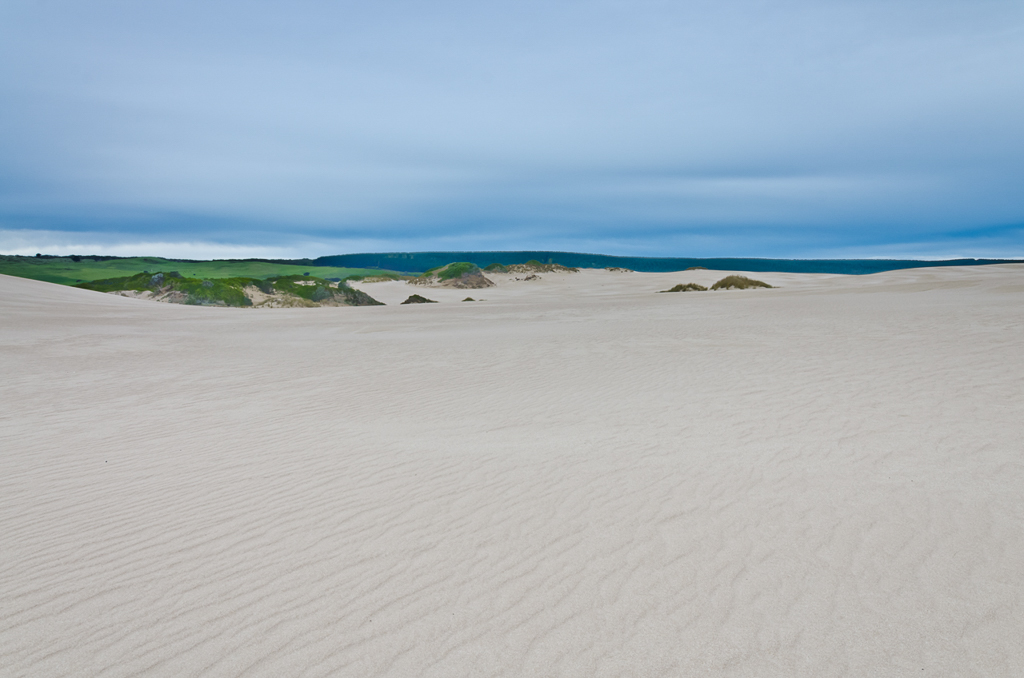 Whilst trudging through this area we came across a sizeable, red-bellied black snake that was on the path. We stopped for a while so it would move on. The only trouble was it didn’t. I was banging the ground with trekking poles, but it had no regard. In fact, the closer we got made no difference. It wasn’t going to shift and as it was freezing cold, we came to the conclusion it had run out of steam. It needed some warmth to fire him up, so in the end all we did was casually walk behind him and continue on. 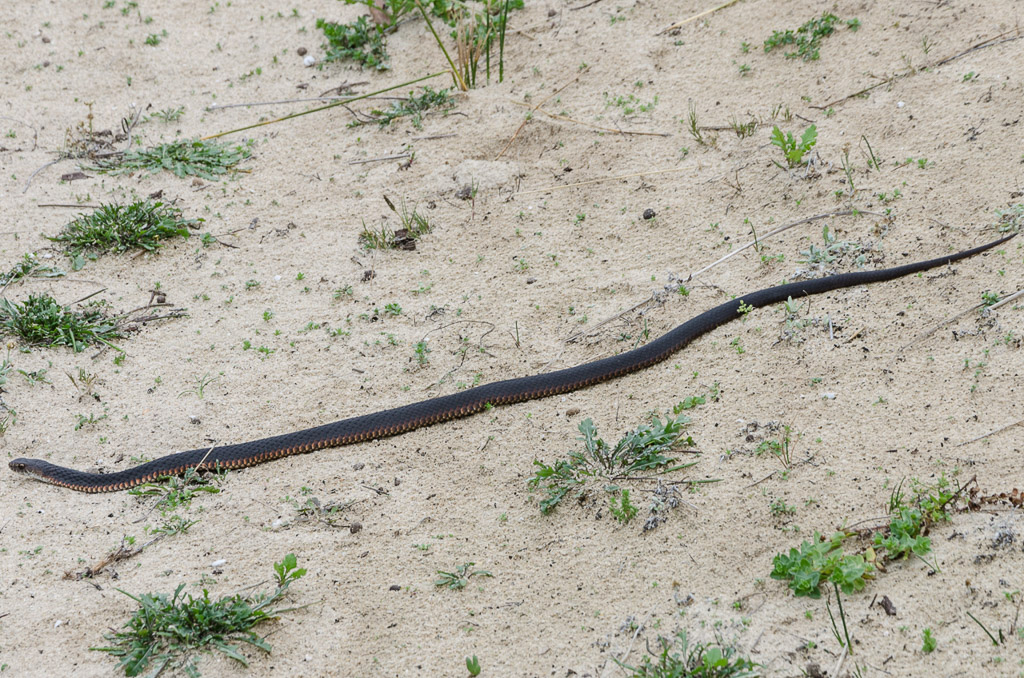 We were close to camp now, but Swan Lake is a weird one. There seemed to be car parks and camp sites all over the place, but Smuffin had it under control, as he’d visited the spot only a few days before. Why? Well, he’d done another food drop of course. None of this, ‘food drop every five days’ caper with Smuffin. He’d put one at EVERY CAMPSITE.

So, the day was done. Mind you, there was one final interest before wrapping things up. We hadn’t seen anyone for the day, but right at the end there was an intriguing sight. Whilst strolling through the dunes… 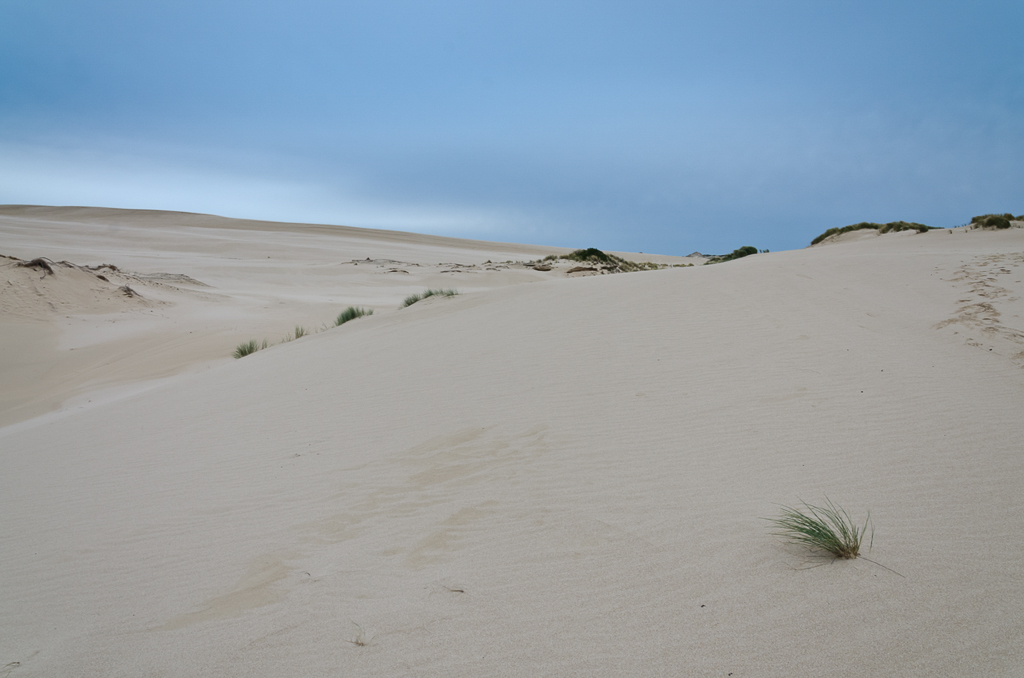 …we came across two blokes in a four wheel drive that appeared to be rigged with a hundred huge spotlights and an insanely oversized sticker on the windscreen that said, ‘LIGHTFORCE’. Yes, it was that loud. No problem? I guess so, but I couldn’t work out why they were wearing camouflage clothing and applying war paint to their faces. Was this some type of ‘gay ol’ time special forces’? I’m not sure, but we looked at them and they looked at us. Both groups were surprised to see each other, but we broke the stalemate by moving on to camp without a word being said.

Do you think it ended there? Well, of course not. As soon as it got dark the surrounding area was alive to the sight of spotlights shining in various places at once, as the cammed up boys went driving around the Swan Lake area. I guess they were trying out the LIGHTFORCE?

I’ve no idea what they were doing, as the lights were rapidly illuminating the hills around the camp, as if one of them was manually moving a spotlight whilst the car was driven at high speed. I thought spotlighting involved shooting at stuff? Thankfully, that didn’t happen and we relaxed for the rest of the evening to the spotlight-show.

That’s about it. The walk now heads inland again for a few days. Rain started after we’d arrived at camp, so we timed it well. The thing is though it continued for the following day, which resulted in Smuffin not having one of his best days of walking. I guess one more sunrise photo to finish off…? 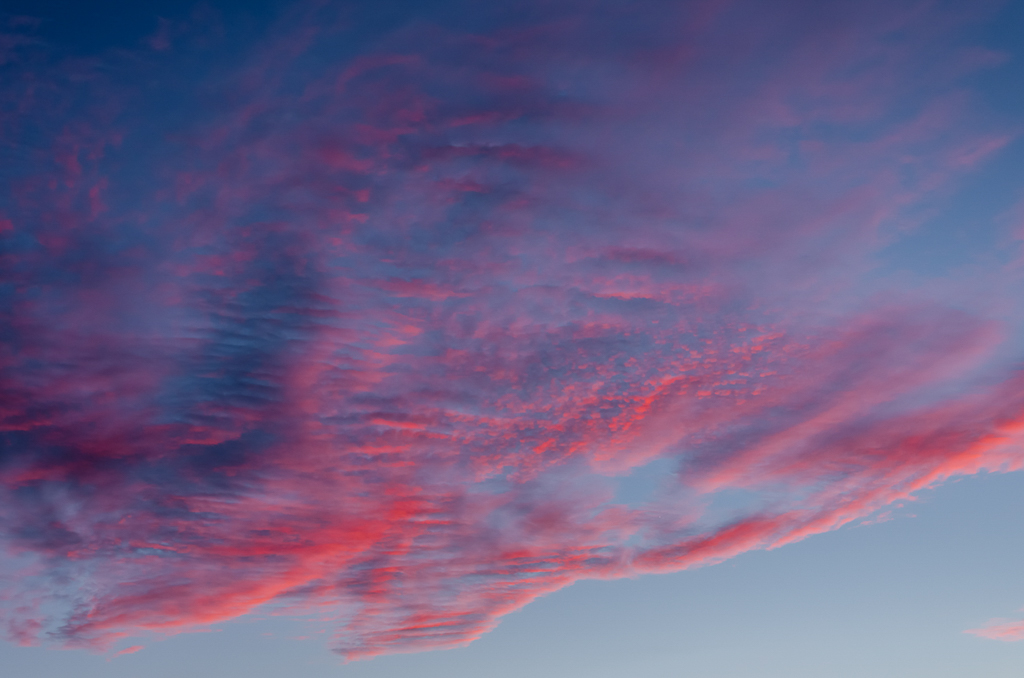 Then again, maybe you want a bit more of this…?