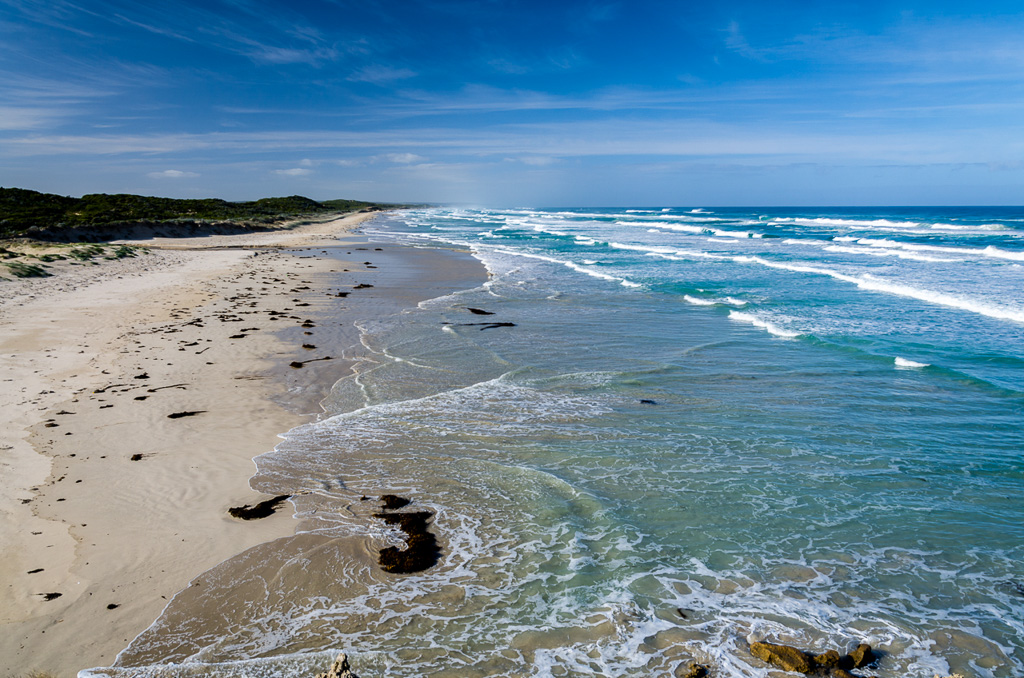 Do you know what? Just the other day I realised that any links placed in the blog can be set to open in a new tab. Mm… Maybe I should have been doing that about a million posts ago? It’s strange why I haven’t picked up on that earlier, as I’m a bit of a hyperlink freak. Within reason, I generally click on any I find online and get peeved if they don’t open in a new tab. Yeah, I know, I could right-click and do the same thing, but who’s got the time and energy for right-clicking a mouse? I’ve got way too many things on the go, such as sleeping and sitting on the couch. Oh yeah, don’t forget eating as well. I like to eat.

Right. Now I’ve discovered that, I’ll get you in the mood as there’s a link coming up. It’s going to be used as an intro to this post for the never ending saga of the Great South West Walk hike. Did you click on it? It opened in a new tab didn’t it? Are you now sitting back, smiling to yourself and feeling happy with life?

There’s no stopping me now and I’ll be going link crazy. Oh yeah, I must warn you that they may not have anything to do with hiking at all. As an example, during my last post I was researching towns with stupid names and came across one that fits the bill. It’s a town in Austria called Fucking. Come on. That’s perfect and it’s a genuine link as well. Don’t worry, I won’t be leading you astray with anything offensive, such as. ‘Tony Abbott covered in baby oil humping a blow up doll’. I’d probably draw the line on that. Okay, I lied. If I found that I’d give you a link for sure.

So, guess what I did over the weekend? Well, I went through about a hundred old posts and converted any links I could find, which is a good example of what living on the edge is all about. Actually, when I was doing that, I found in one of my most popular posts a brutal misspelling. I’d written ‘traditional’ as ‘tradtional’. How did that get through the system??? I wonder how many people read that post and didn’t come back because they thought, “What sort of a wanker can’t spell traditional?” I lost some sleep over that one, but I should get over it by mid next year.

Back to the walking I guess and the next leg between White Sands to Lake Monibeong. Smuffin and I had spent the night at the White Sands camp site. It’s about the only one on the entire GSWW that’s not accessible by vehicle, so it did have a remote feel to it. It also had something that its name describes. It’s really, really sandy. In fact, it was summed up by an entry in the hikers logbook (why don’t I have a photo of that?) which commented, “There’s sand everywhere”. Yep, that’s about it.

In the morning the weather was looking good, so at first light I made for the beach to get some photos. It wasn’t too bad either. 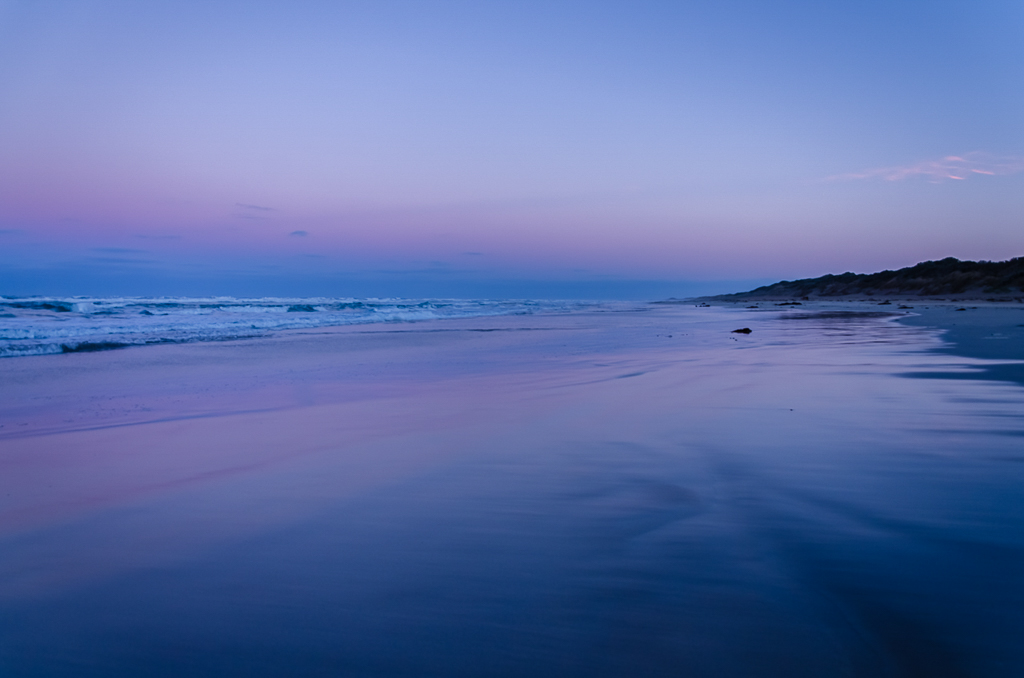 We had a short day ahead of us, so we weren’t really rushing to get moving. Then again, even on the big days we had trouble hitting the road before 9 am. There were some interesting relics lying around the campsite. This bone was one of them. What is it? A whale bone? A model for a roundabout? 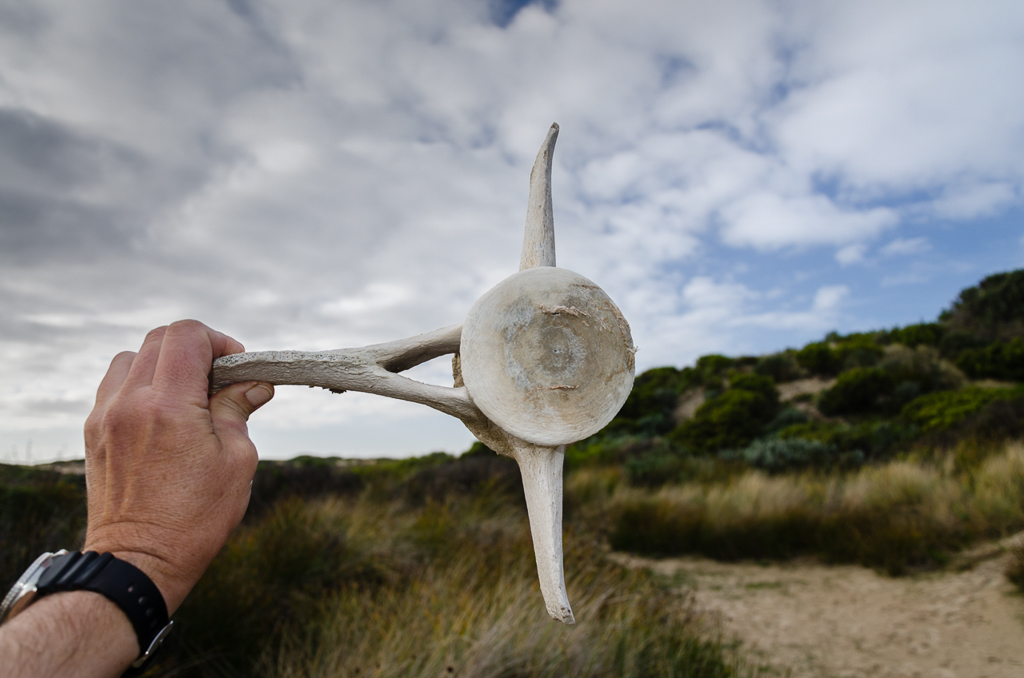 If I’d found that on the beach, I would have taken it, but instead I left it where it belonged. On the table. Anyway, I had enough crap to carry, as I loaded up with the ‘treasures from the deep’ which I’d found the previous day. Here I am ready for action. Helmet under pack lid, flipper strapped on and buoy tied on by the ‘knot guru’, Smuffin. 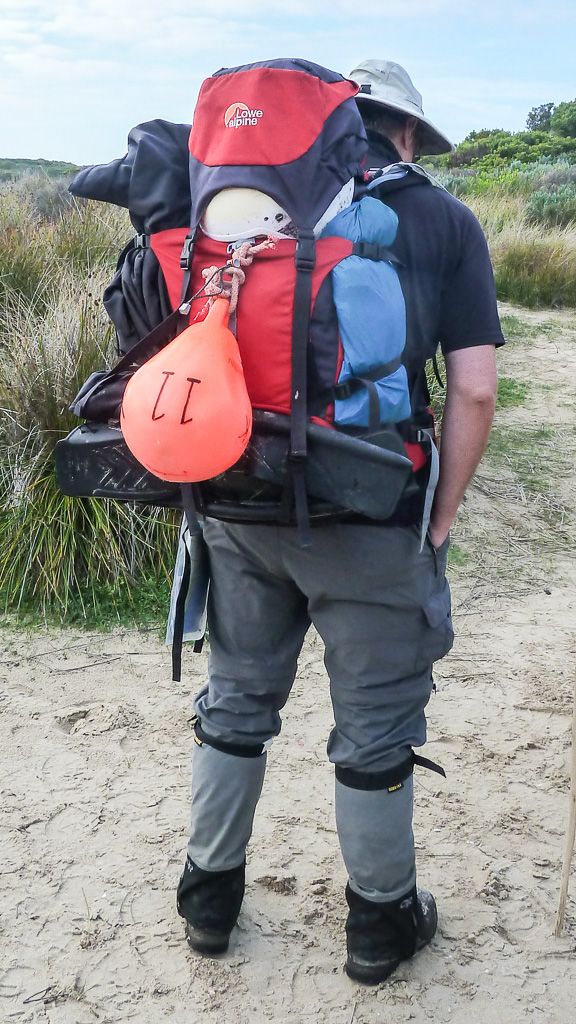 Does this flipper make my bum look big?

Now, if you didn’t realise by now, none of this crap was ultralight. Why don’t they make cuben-fiber flippers? Titanium helmets? Papier-mâché buoys?

I had a grand plan to show you how much all of this stuff weighed, as an example of the absurdity of carrying it. Not many grand plans come through with the goods though and this can be filed under, ‘the intention was amazing, but the photographic results are a fiasco’. In fact, I’d so lost my mojo doing this I couldn’t be stuffed fine tuning the photos. I’ll show you what I mean. 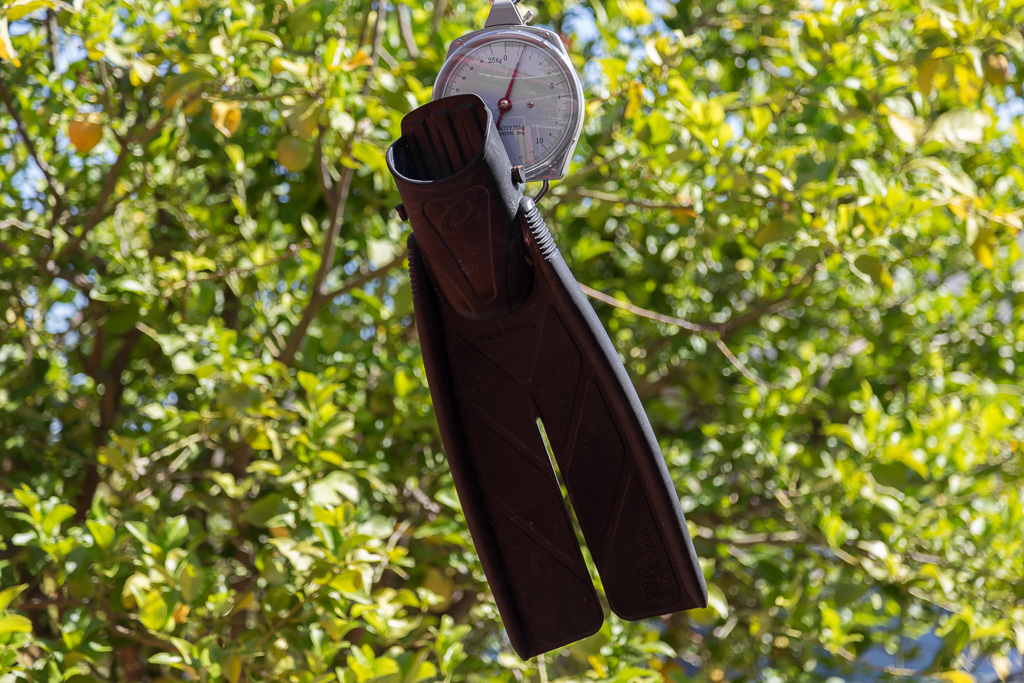 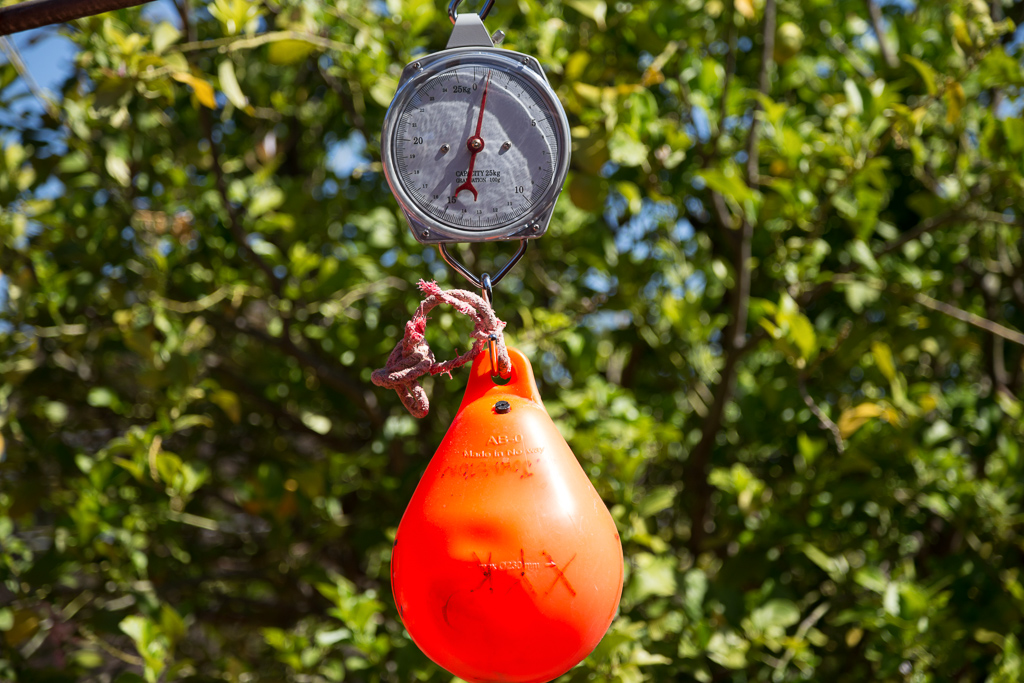 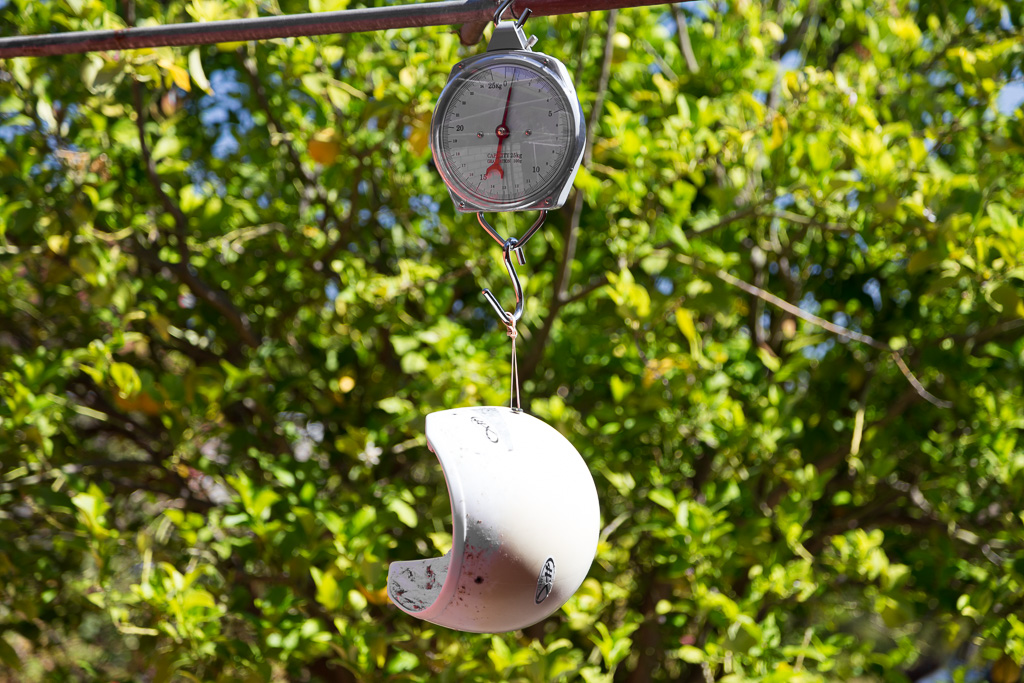 See what I mean? I’ve no idea what the weights are, as I need an electron microscope to read the scales. I think it was just under 3 kg all-up. Oh yeah, did you notice that I don’t have a caption for the last picture? As an example of how stupid online searches can be (I’m sure you know this already), I typed in, ‘words that rhyme with helmet’. Guess what I got? One website gave me one match which was ‘Helmut’. Yeah, thanks for that. I’d have never thought of that one. I kept Googling, but gave up when one website proclaimed, ‘WORDS THAT RHYME WITH HELMET!!!” and as a result gave me ‘football helmet’. I can take a joke, but that’s pretty stupid even for my standards and I generally run off a pretty low baseline.

Oh yeah, one thing I must mention which has just become explanatory is that all of that crap I found, I brought back home! Don’t worry, I didn’t lug it all the way for the next week of walking. How did I get it back then? Well, in order for you to come back, I’ll drag out the answer by keeping you in suspenders until the next post.

We hit the beach and the sand wasn’t too bad for walking. 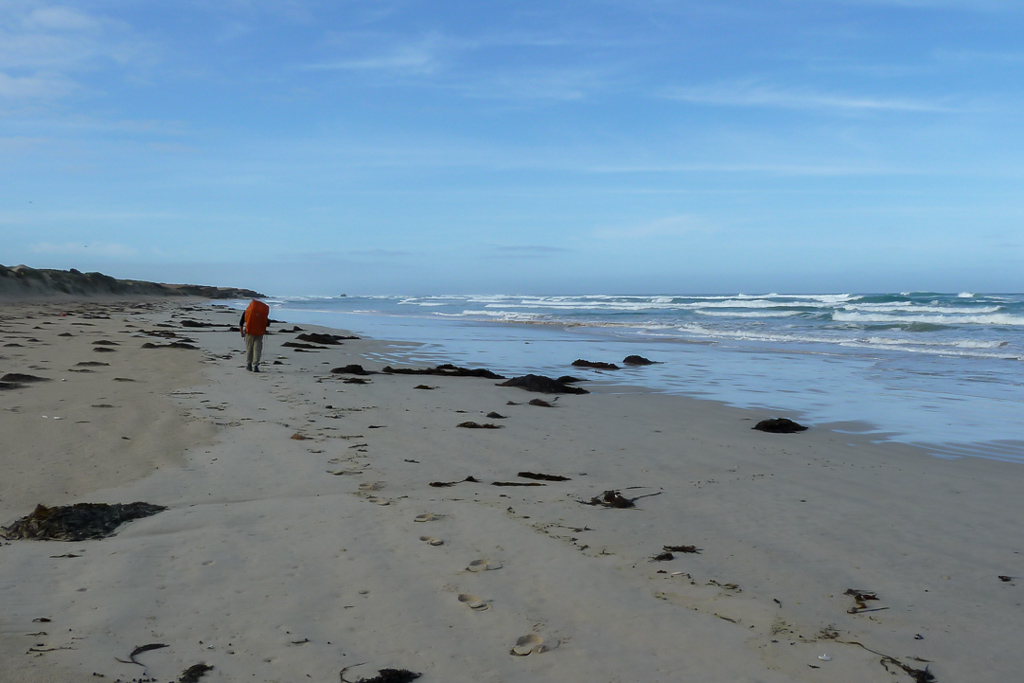 Not that we had a lot of beach walking to do anyway. There’s an inland track to avoid rock outcrops which we had to follow as the tide wasn’t in our favour.

First up was a stretch called ‘McEacherns Rocks’. We found a 4WD track that headed inland… 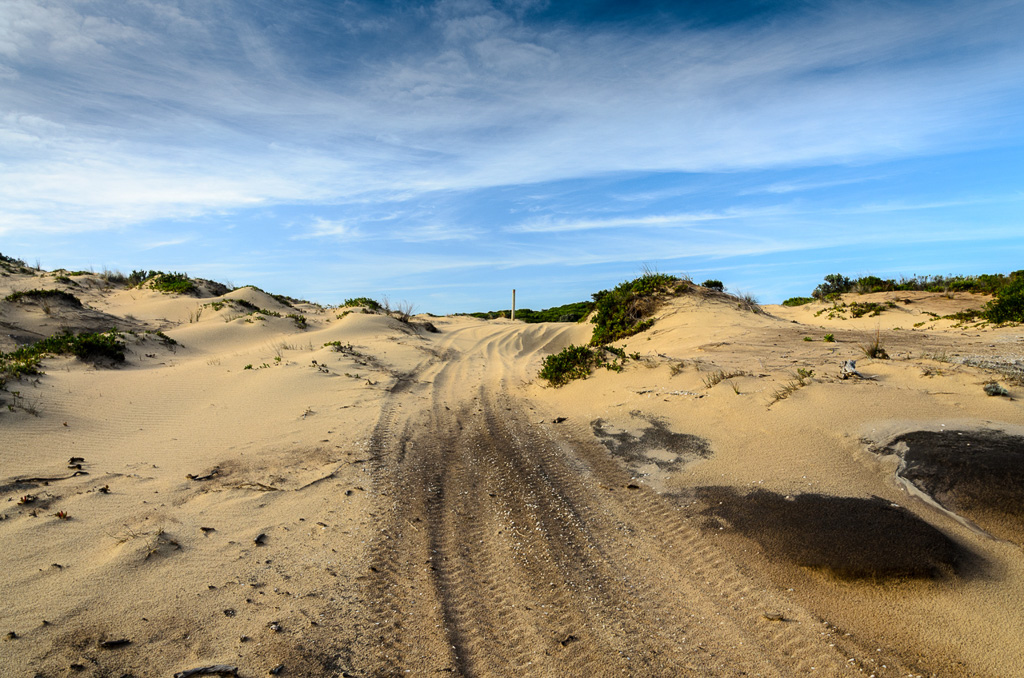 …and as per usual, Smuffin was off and racing miles ahead. 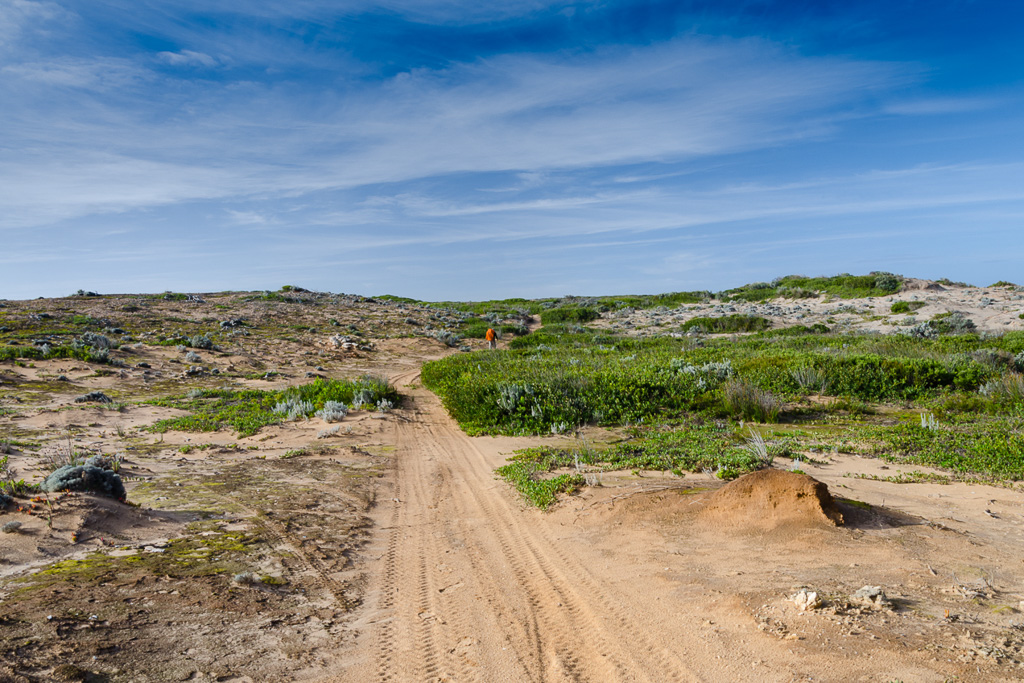 On the beach the previous day there had been plenty of man-made objects to be found. This day was no different, but the results weren’t very inspiring. Hey, owner of ‘1D-8HS’, I found your number plate. I know what you’re thinking as well. “Don’t tell me he brought a number plate home with him as well?” Of course I didn’t. I don’t just lug any old crap. 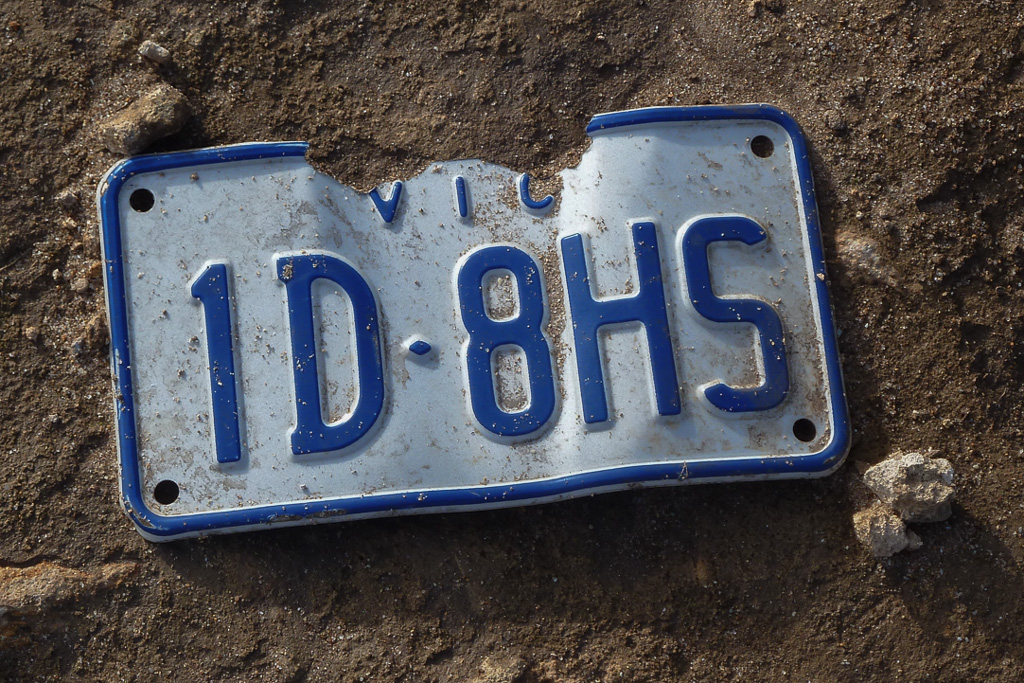 This inland section was quite good though. It was flat and being elevated we had a good view of the coastline around us. 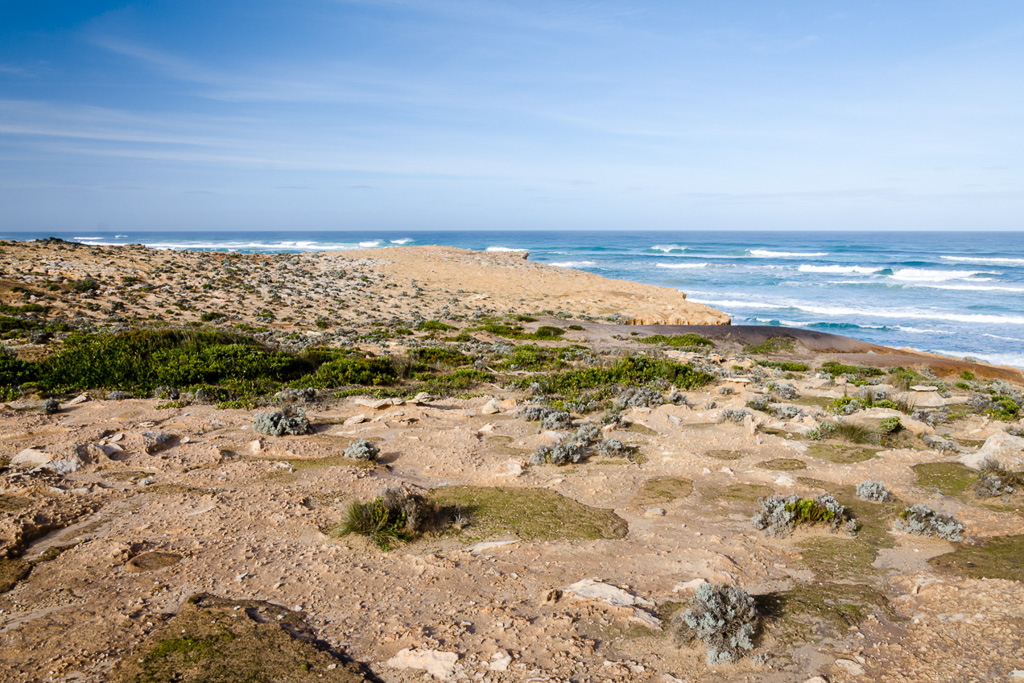 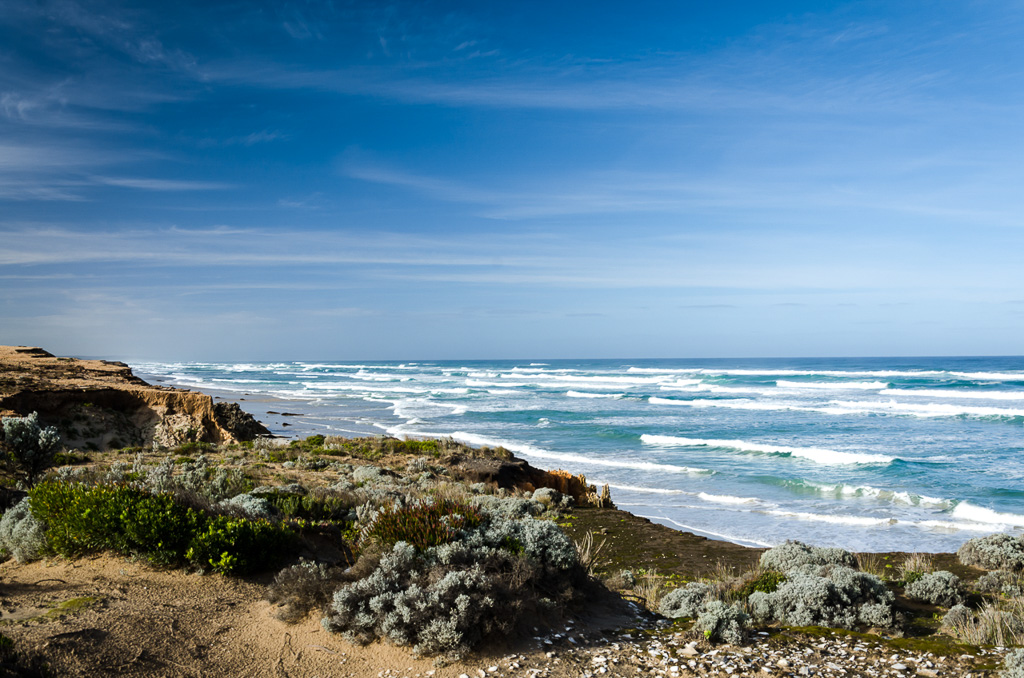 During this inland walking we passed a large group of old seashells. I was wondering if it was an old Aboriginal midden? Then again, it could be a left over from an old sea bed? Who knows, but it was quite interesting nonetheless. 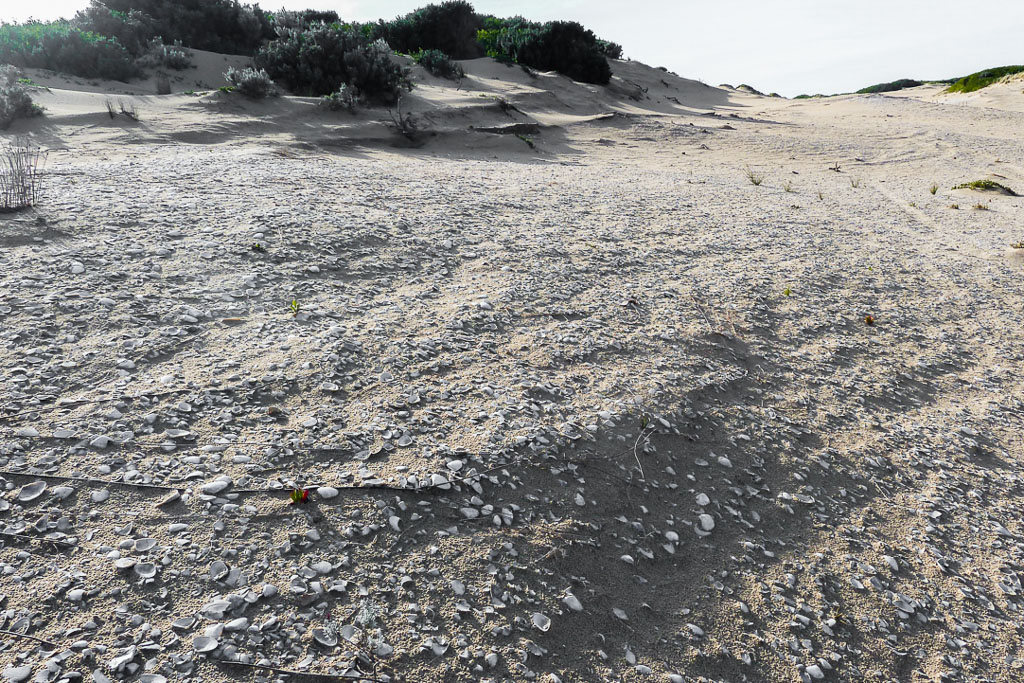 We wandered on until reaching a nice lookout at Nobles Rocks… 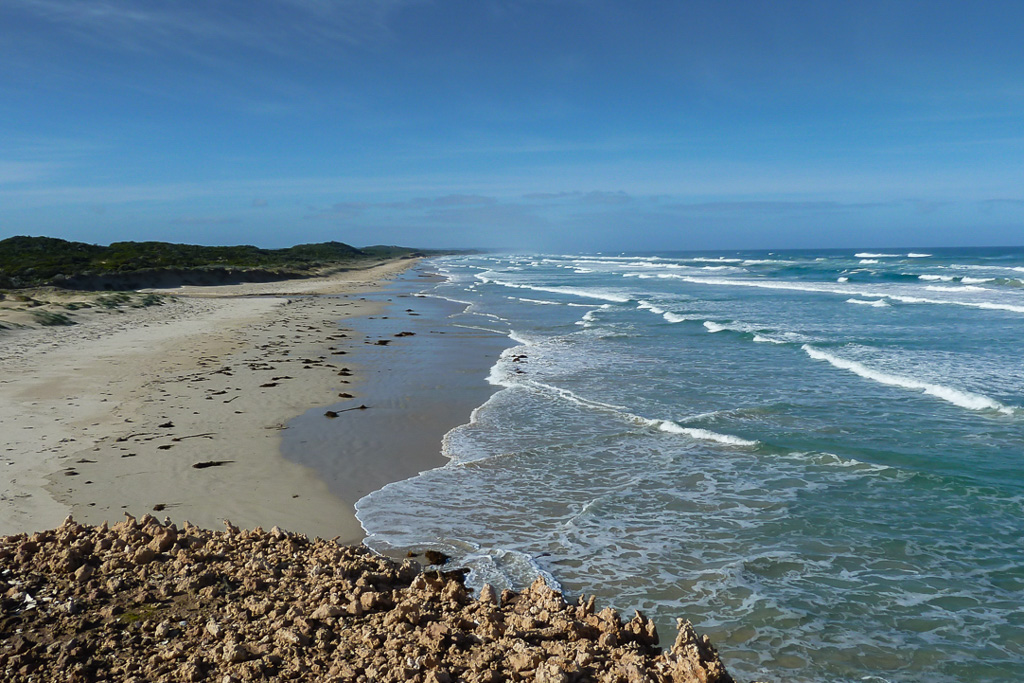 …before descending down to the beach… 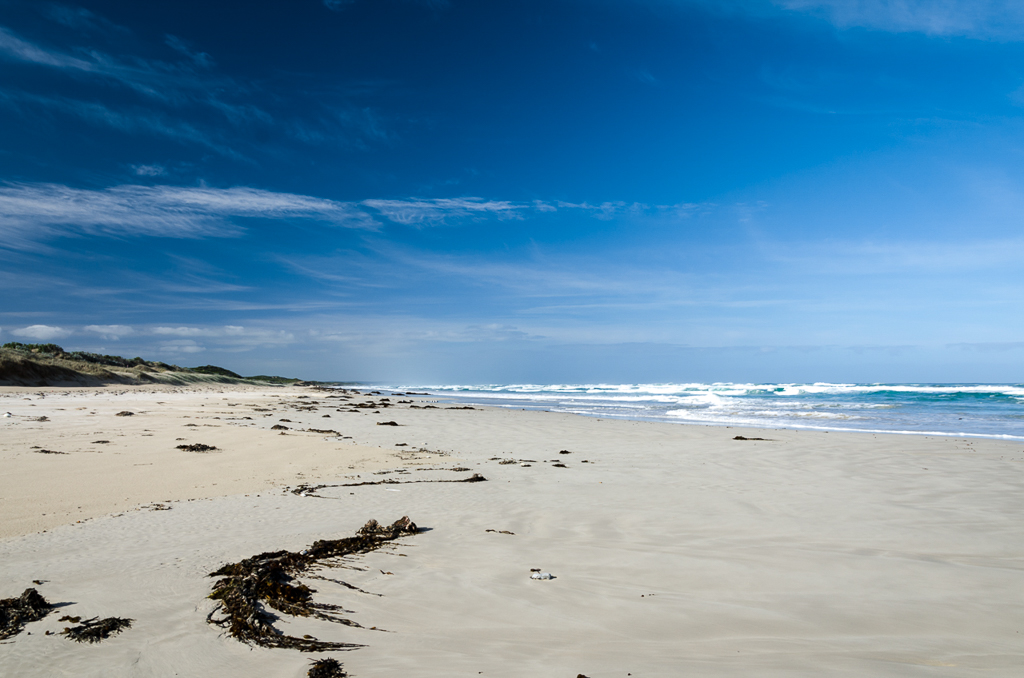 …and passing a quite attractive green fishing buoy. If I wasn’t carrying half a boatload of things already, I would have snapped this one up. 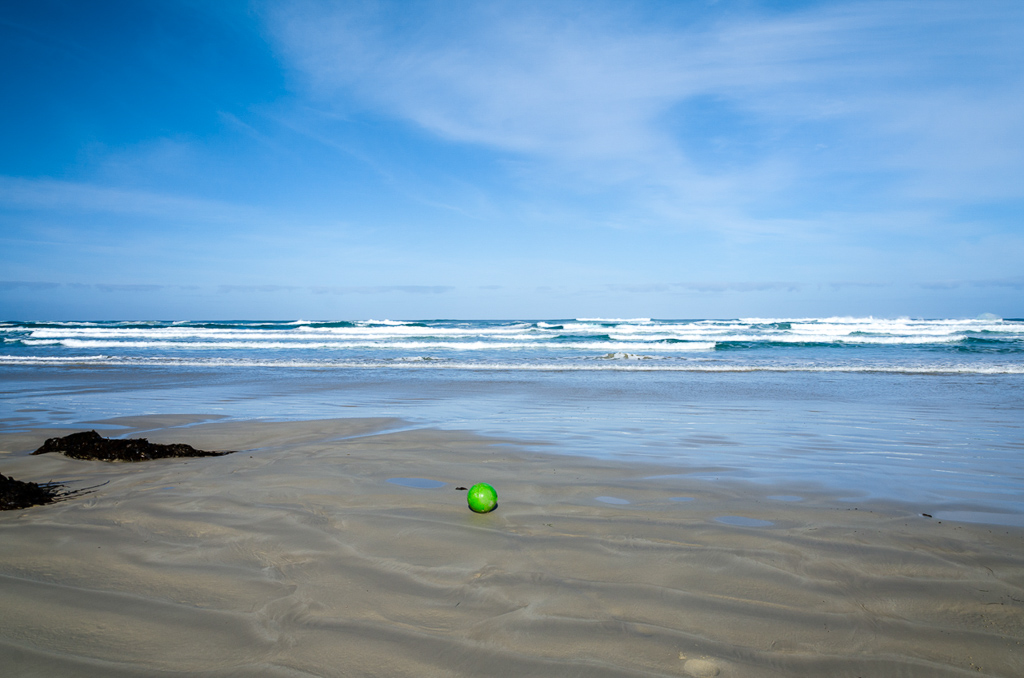 There’s an option at this point to either continue along the beach or follow an inland track to Lake Monibeong. The sand was feeling a little soft now, so we elected to head inland. Before leaving the beach I noticed some paw prints in the sand. There seemed to plenty of these on the beach, but so far hadn’t seen any animals. I assume they’re feral cats looking to decimate the birds or scavenge on the beach…? Then again, could it be a dog? Or the world’s smallest sasquatch…? 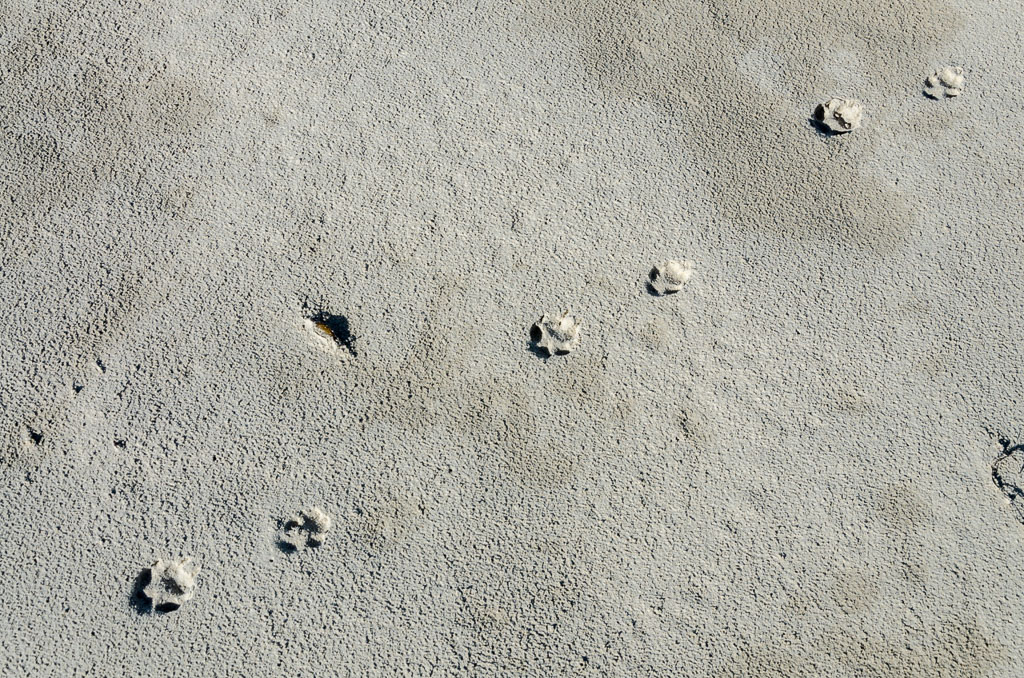 Once off the beach we found the track… 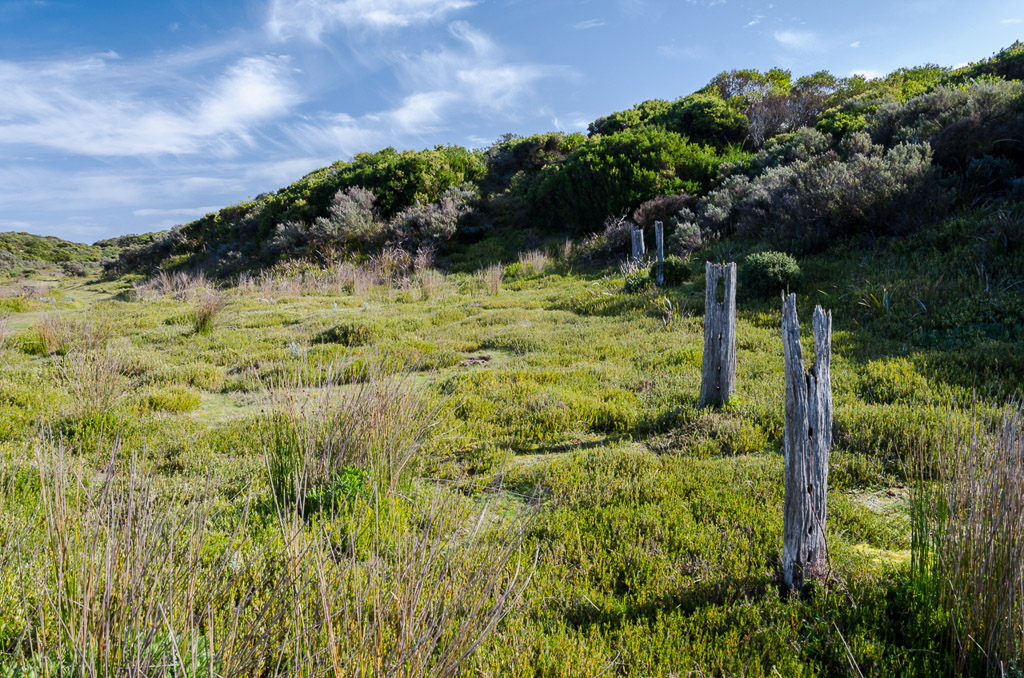 …but before continuing on it was time for lunch. Now, do you remember the last post where I was talking about the missing lunches? Well, just to put you out of your misery I’ll explain what happened. Mind you, I didn’t work this out until the hike was over and I checked the box I’d left at Nelson.

When packing the food drop I was quite diligent in writing down what was needed and ticking off those items as they were packed. Guess what? I think the next picture explains things. 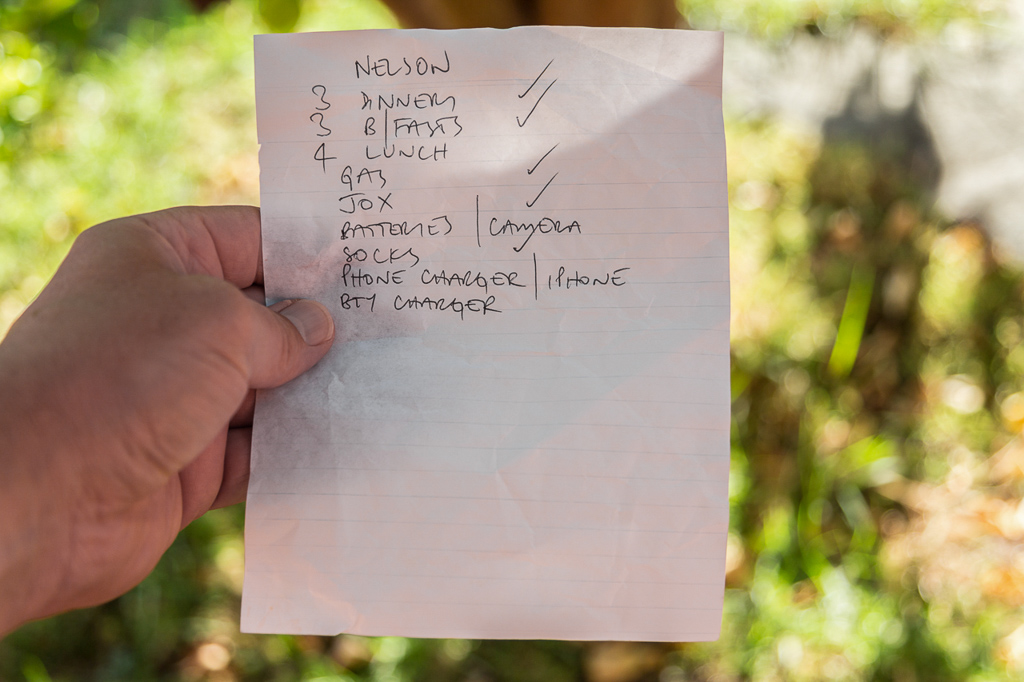 There seems to be a slight problem. The ‘lunches’ aren’t ticked off! Well, that’s a balls-up, and there I was accusing the staff at the Nelson store of stealing some dirt cheap muesli bars that I normally couldn’t give away. Mystery solved, but it didn’t assist me much on this day, as once again I had to beg Smuffin for some food. Luckily the emergency jar of peanut butter was on hand.

Before moving on, there’s one more thing about that list. Do you see how funky I can be when writing? I’m such a busy bloke I haven’t got time to muck around and write ‘jocks’. Nope, I went with ‘jox’, which is way more hip and I reckon it saved about 0.7 seconds of my life which would have been wasted if I wrote it out correctly.

Anyway, with Smuffin’s lunch done, we moved on and this section was pretty comfortable going. Walking on a hard surface, flat ground and only a measly seven kilometres to the next camp meant we were moving quickly. Well, when we didn’t have to negotiate trees that blocked the path. 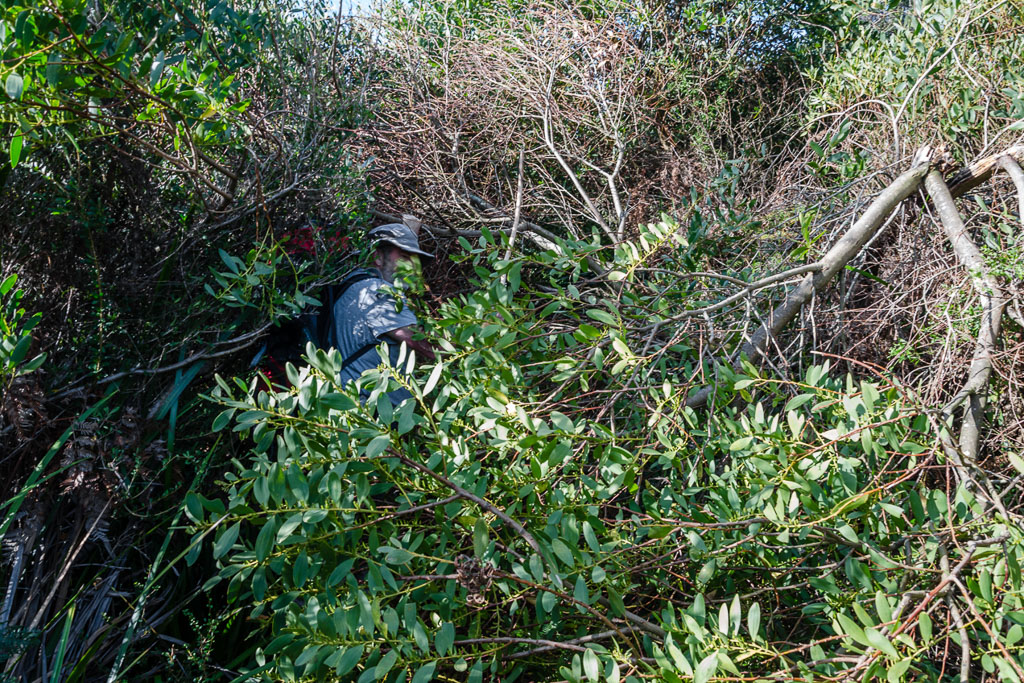 Yes, the track is in there somewhere. 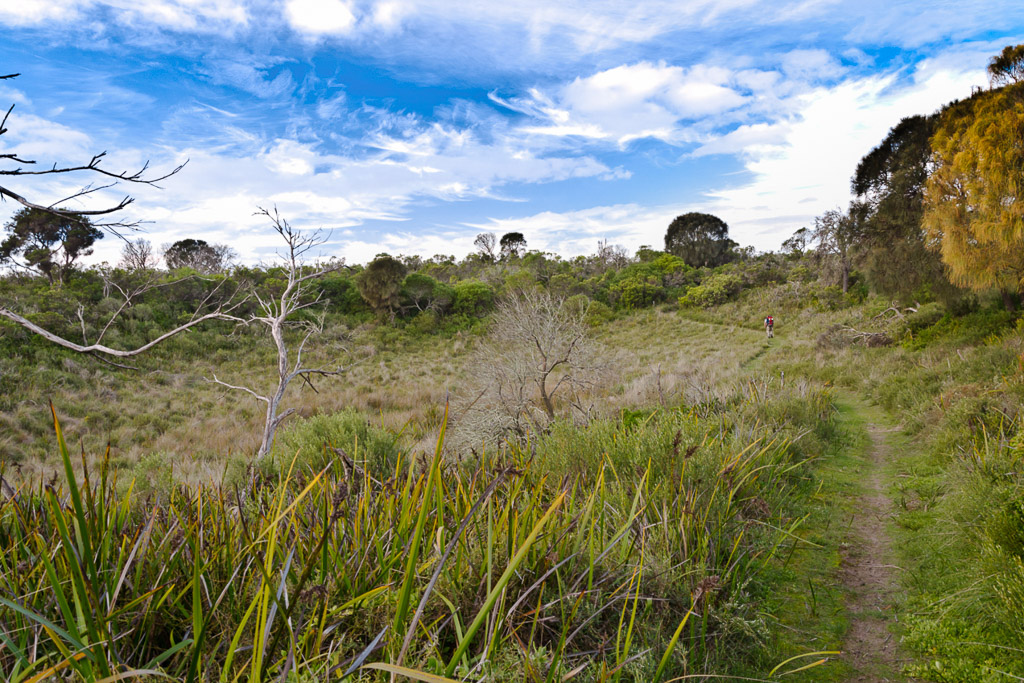 …which was interspersed with huge, bare trees. 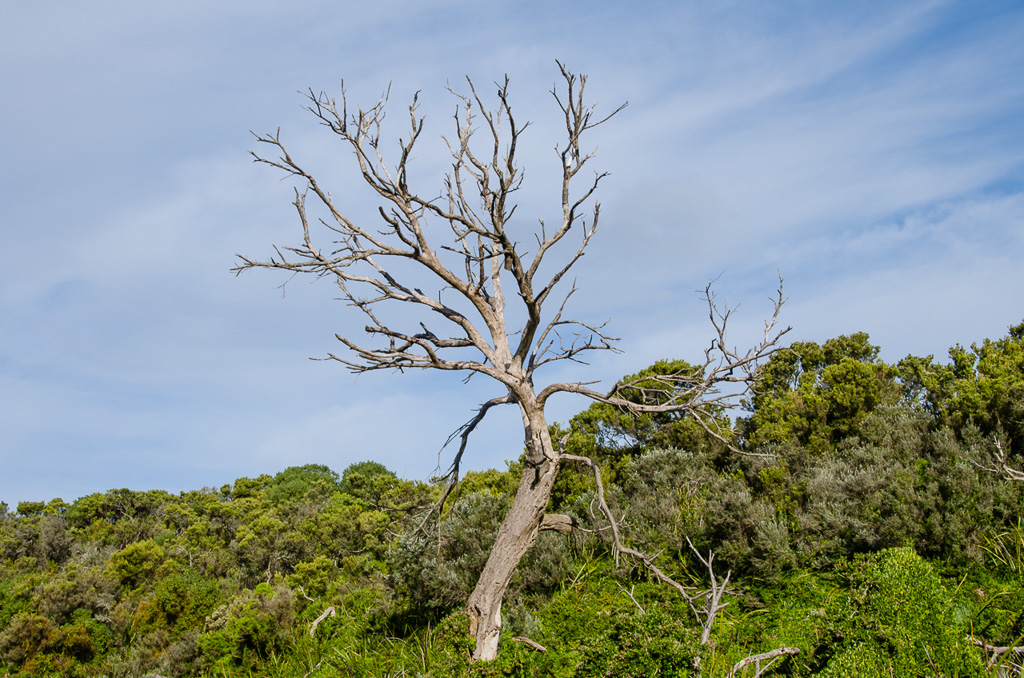 By now the lake was getting closer, but I do have one small problem. I’ve no idea of its proper spelling. On the map it’s pronounced as Lake Monibeong, but against that name there’s another in brackets called ‘Lake Mombeong’. So there you go. I assume it’s the former and the latter is its original name? 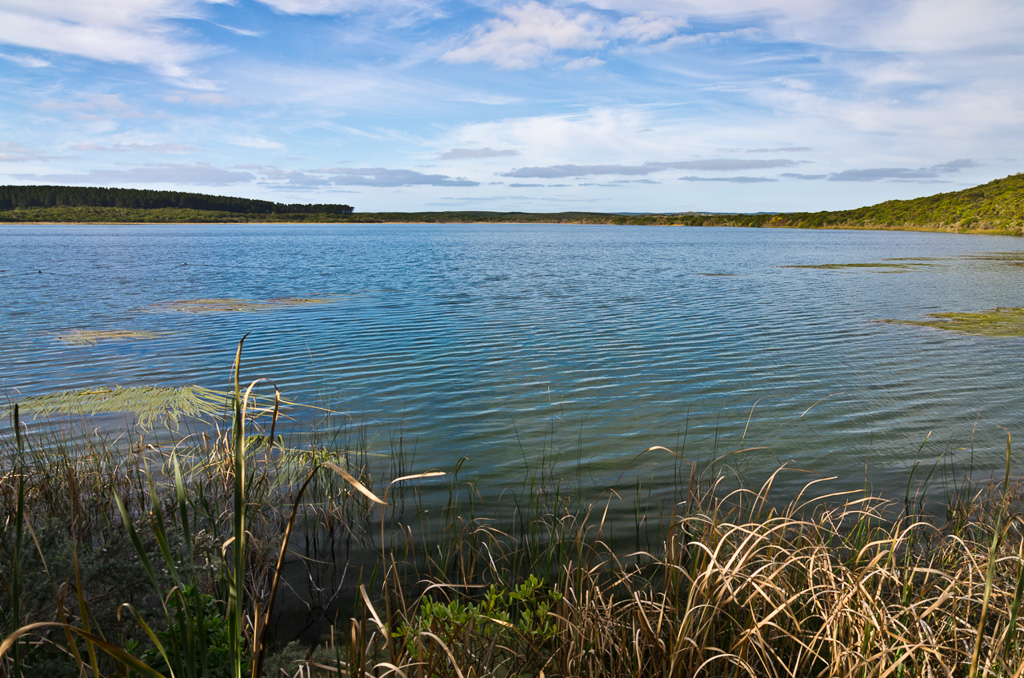 In the picture above, the camp site is at the far end of the lake. It was about this point in the walk that I had a slight problem. My stomach suddenly did a back-flip, rotated a couple of times and then declared to my brain, “Comfort station. Now.”

These were desperate times, as I slipped into ‘full-throttle-bolt-upright-like-a-penguin’ mode. I quickly powered past Smuffin leaving him to chew on the dust from my boots, as he uttered, “That’s the fastest I’ve ever seen you move!” The whole scenario was a frightening one, but I still sneaked in a quick picture as my stomach contemplated detonation. 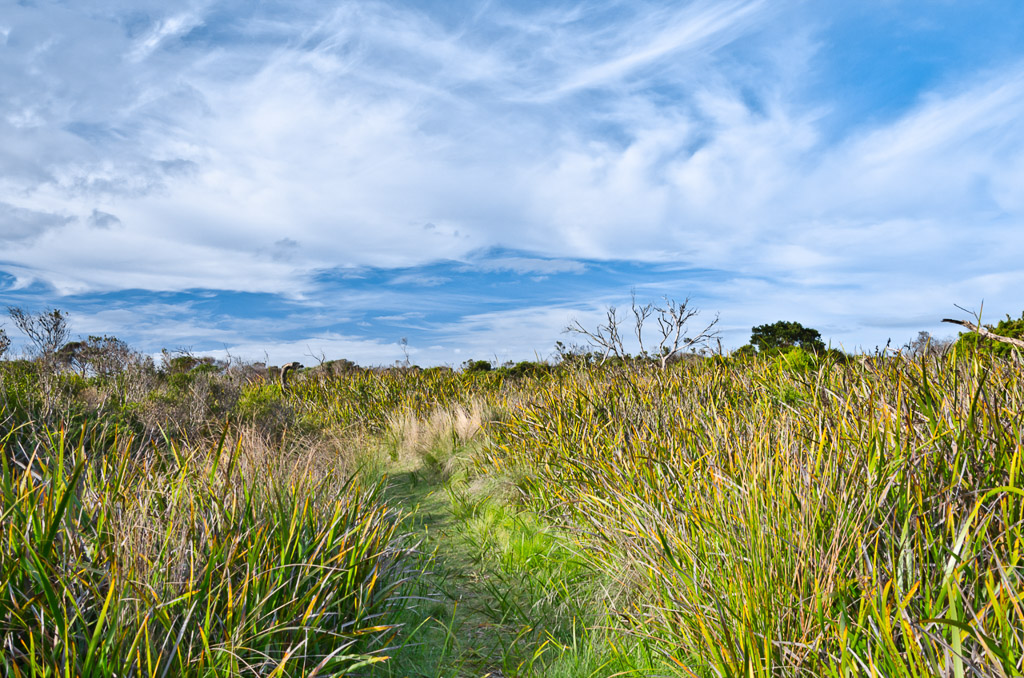 It seemed to take an eternity to reach the campsite, but when I arrived I hurled the backpack away and kicked down the door to the Gent’s as if I was in the SAS during a room clearance. Whew.

Well, that’s it for another day. Smuffin collected a food drop and we settled back for an evening in an absolutely cavernous, but empty camping area. What did the GPS reveal for the day? Well, that’s the problem as it didn’t give me a track to upload at the end of the trip. It had been acting a little strange since the first day, but at least it appeared the distance travelled was still correct. In all, this was a short day of about 14 km, although a bit of guesswork was required. I was quite glad it was over though, as the ‘treasures from the deep’ were a bit heavier than I thought.

With the day done we sat back to watch a nice sky as the sun set. Red sky at night…? 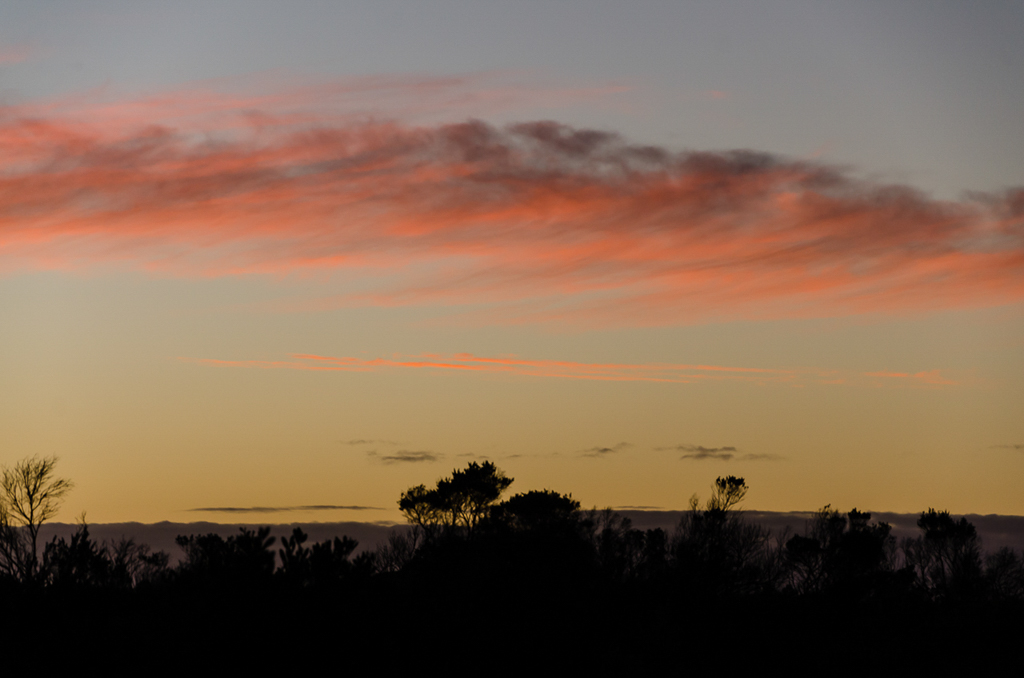