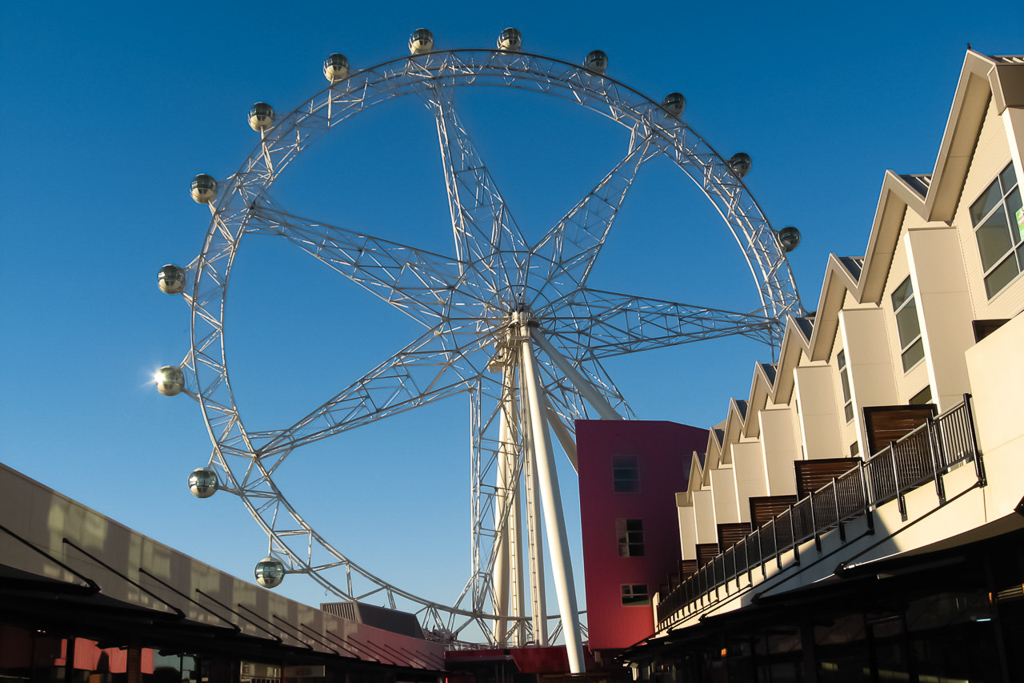 Okay, it’s Friday evening and I’ve just awoken from a sizeable ‘disco nap’. The reason? Well, I was attempting to write a post all week, but once home from work I found myself slipping into a coma. As a result there was nothing forthcoming blog-wise.

Today is different though. I snoozed in order to awaken feeling fresh for the purposes of creating a mind blowing entry of maximum creativity.

Right. You do realise I wrote the last paragraph about an hour ago? I think I intimidated myself too much by talking up what I’ve planned with this post. As a result I’m feeling a little frightened this entry will possibly be the worst I’ve ever written. I suppose if it is, it’s not a real problem though, as I don’t think many people look at the internet. Do they?

Remember how in my last post I mentioned I was going to balance trip reports with other entries of general gibberish? Well, this is definitely not hiking related. In fact, it’s something totally different altogether and there really should be a sub-heading to this entry. How about…?

Oh yeah, that’s certainly the heading I was looking for. Yes, it’s time to look a wonderful piece of folly of the Southern Star Observation Wheel which sits forlornly in the Docklands area of Melbourne. Anyone not from Melbourne would probably say, “Isn’t it closed as it fell apart?” Um… Yes, that’s correct. This ‘tourist attraction’ opened in 2009 and only survived a month or so before cracks appeared and barely anyone got to ride the glorified Ferris-wheel. Except Ben and I.

The idea to build a tourist attraction, similar to a poor man’s London Eye was always going to be problematic. Surely if it was to succeed, it’d have to be built where once up in the air, there’d be some sights to look at? Can you see the problem? Yes, building something in an area, which looks like it’s been hit by a small thermonuclear bomb was never going to be ideal.

When it was being built I told anyone, anywhere, it was possibly the biggest potential turkey ever created. Well, in Melbourne anyway. I’m still feeling the trauma of visiting the Canberra ‘Dinosaur Park’. 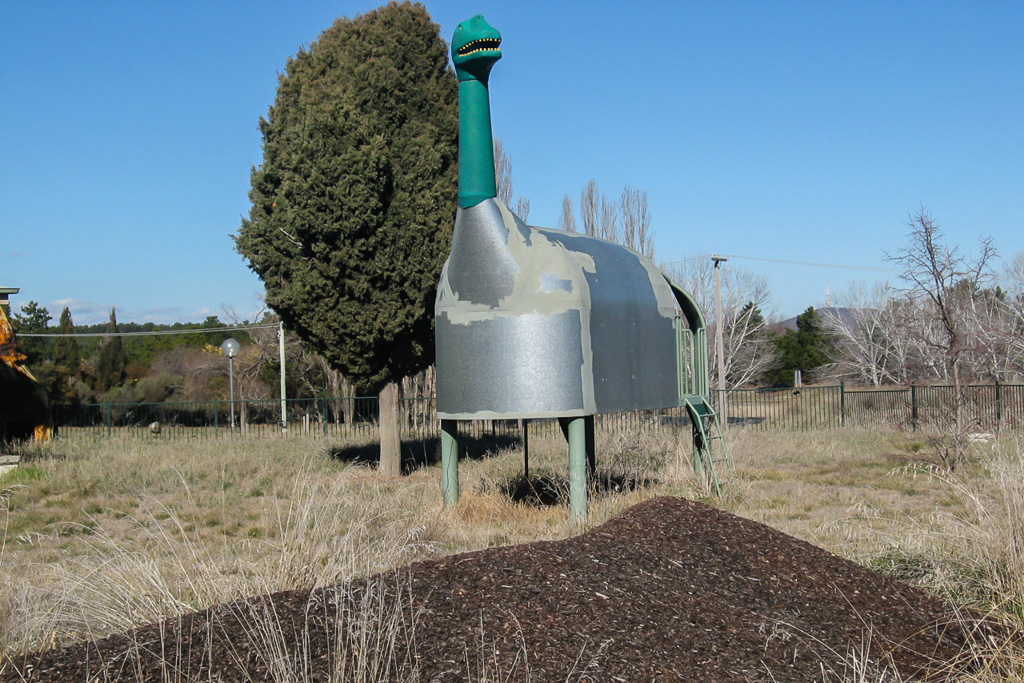 I’m pretty sure the dinosaurs here were not used in Jurassic Park, as they’re not the most life-like I’ve ever seen.

Anyway, as the Southern Star was completed I was still positive it would bomb and I remember standing in front of a large group of people, pointing in the Southern Star’s direction, whilst shouting, “It’s a white elephant. Listen to me! It’s a WHITE ELEPHANT!” No one listens to me though and definitely not on this occasion, as they rewarded my wisdom by raining small, cream irregular objects at my head. As I left the cinema, I decided then and there I’d go for a ride on the big wheel before it went into receivership.

So, on a burning hot January day, Ben and I headed to the wheel and from the start things were looking grim. At the base of the wheel, there was a gelati stand which was being manned by an old bloke who looked slightly suicidal as he perused tumbleweeds blowing past. The old ‘I-wish-I-sold-hot-food-instead-of-ice-cream-so-I-could-put-my-head-in-the-oven’ bloke was probably lured there on the pretence the place would be rocking with punters. Mm… Not in reality though, as the place was deserted.

Ben and I weren’t deterred though and we pushed on, picking up some paraphernalia on the way. I do like a tourist attraction which doesn’t hold back. What do I mean? Well, how about this spiel about the big wheel, which I’ve scanned from a prized document in the extensive fiasco collections.

Wow. Oh no, not just an experience like nothing in Victoria or Australia, but you better believe it, the earth. I love the statement and give props to the people who came up with such an astounding load of crap in one solitary paragraph. That’s the sort of thing I dream of writing, but just don’t have the skill to pull off. Whoever wrote it was a professional.

On we continued and reached the point of paying for this chance to ‘experience the euphoria of soaring flight within the Southern Star’s orbit’. Is vomiting similar to euphoria? That’s the way I felt when it came time to pay for our ride. It was then, I finally understood the main logo, as the price to ride the big wheel was truly ‘like nothing on earth’.

With tickets in hand we moved onto the ‘loading section’. Now, the wheel doesn’t stop moving, but it’s going so slowly it’s a matter of strolling onto the individual passenger pod (is that what they’re called? I’ve no idea) as they pass by. Sounds simple right? How does ‘no’ grab you?

Yes, the loading area had vast lines of taped barrier, which zig-zagged in order to keep the hundreds of people in one orderly line. The trouble was, we were the only ones there and it took us about five minutes to negotiate the extensive zig-zag until reaching the coveted loading spot, which was manned by three people.

Oh yeah, the loading crew outnumbered the total passengers. What got me though, within this ghost town, was one of the loading crew. He was carrying on as if he’d spent the previous eight hours managing hundreds of unruly citizens, risking their lives to get on the wheel.

“STAND BEHIND THE LINE! IT’S DANGEROUS, SO DON’T MOVE FORWARD UNTIL I SAY SO! OH YEAH, BY THE WAY, I’M AN ANNOYING BASTARD!”

Okay, I may have added a line. Can you guess which one? Anyway, he was fired up, but eventually he let us approach the crawling cabin. I’m not sure about the danger, as the pod was moving at the speed of a turtle in a headwind whilst dragging an anchor.

Safely in our pod, we were off. The first thing I noted was the cabin air conditioning had a decent sub-zero output. It also felt pretty sturdy, as Ben gave it the scientific ‘jump up and down’ test. I remember saying, “Go easy with the jumping. It might break.” Mm… I’ll get back to that later. What about the views though? Well, we’d only just got going, but they were already impressive. I mean I could clearly see the freeway rising up above a field of metal ‘things’. 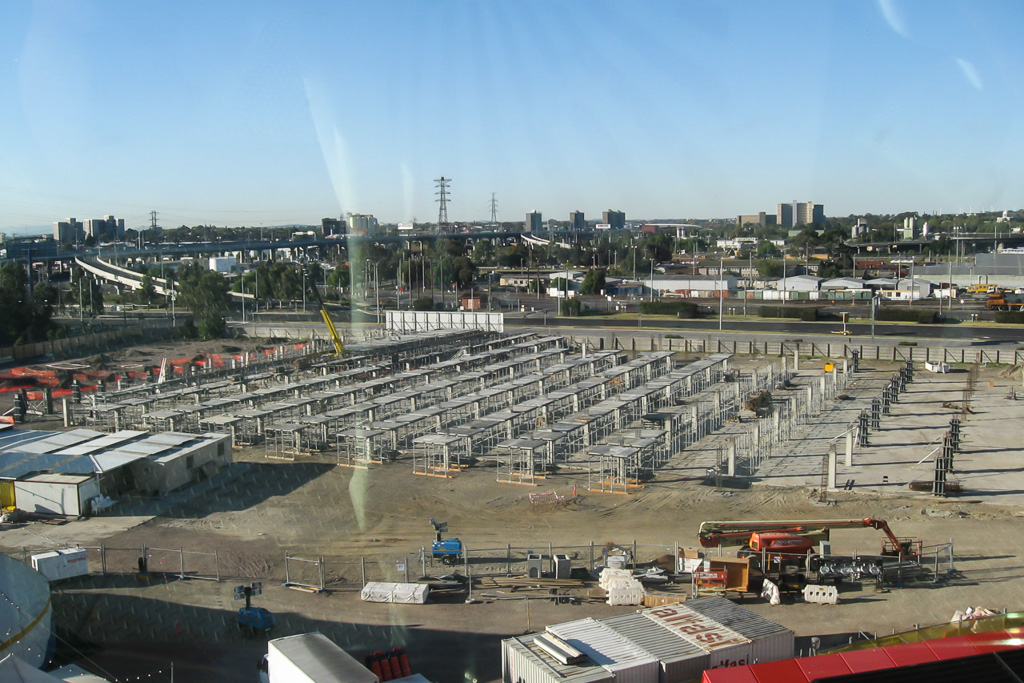 That’s not all though. I made note of some cheap parking for future reference… 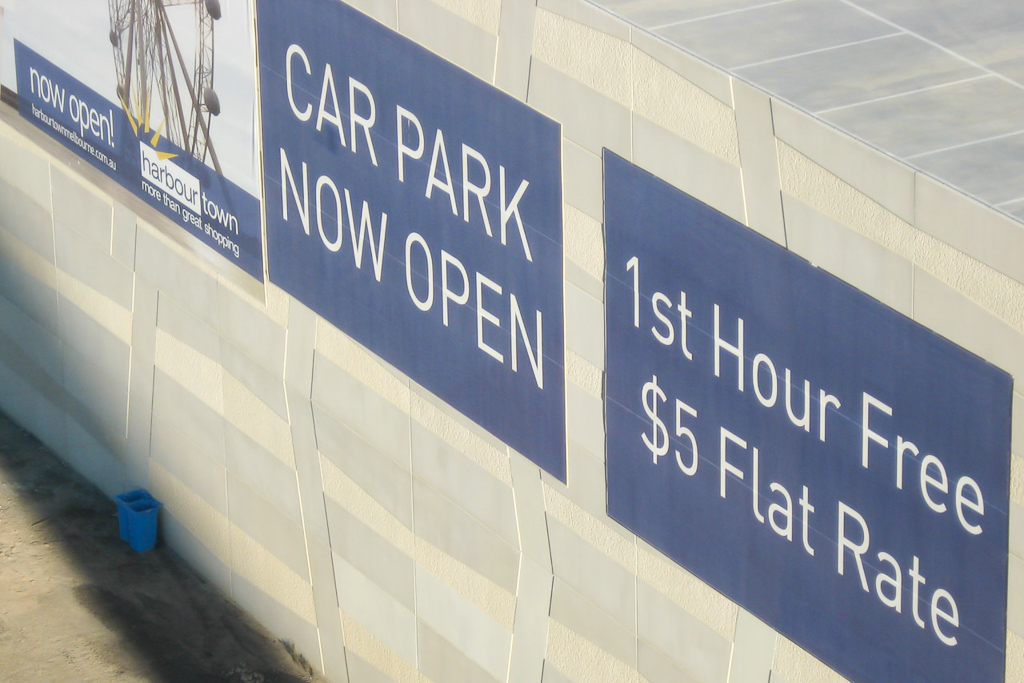 …and a portable set of lights. Amazing. It was like nothing on earth. 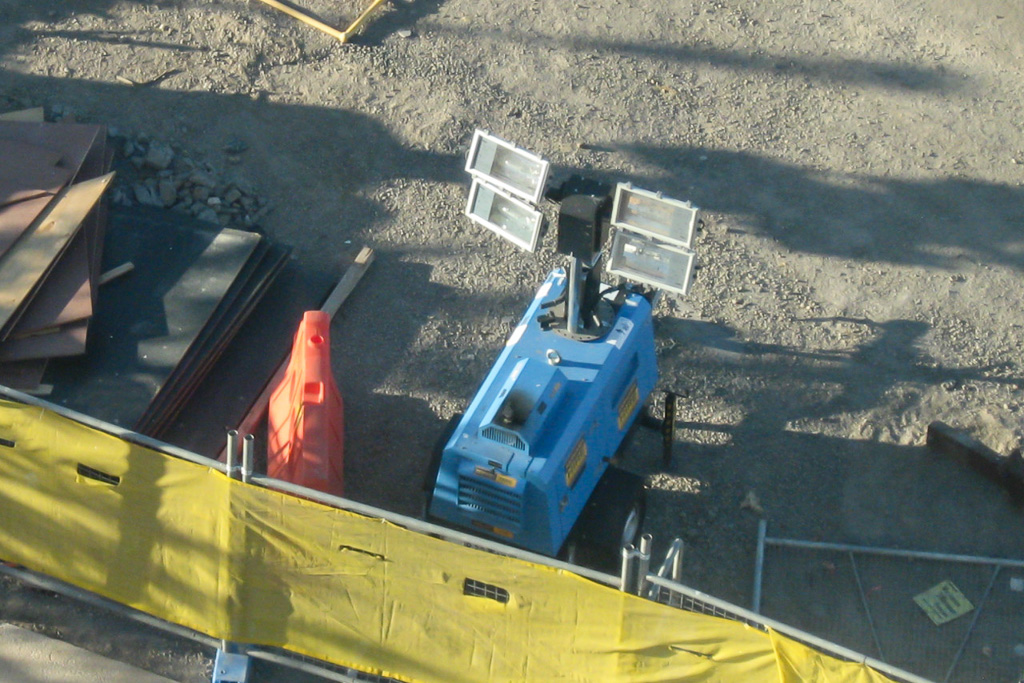 We were starting to get some height, which gave me a chance to admire the freeway and industrial area again. 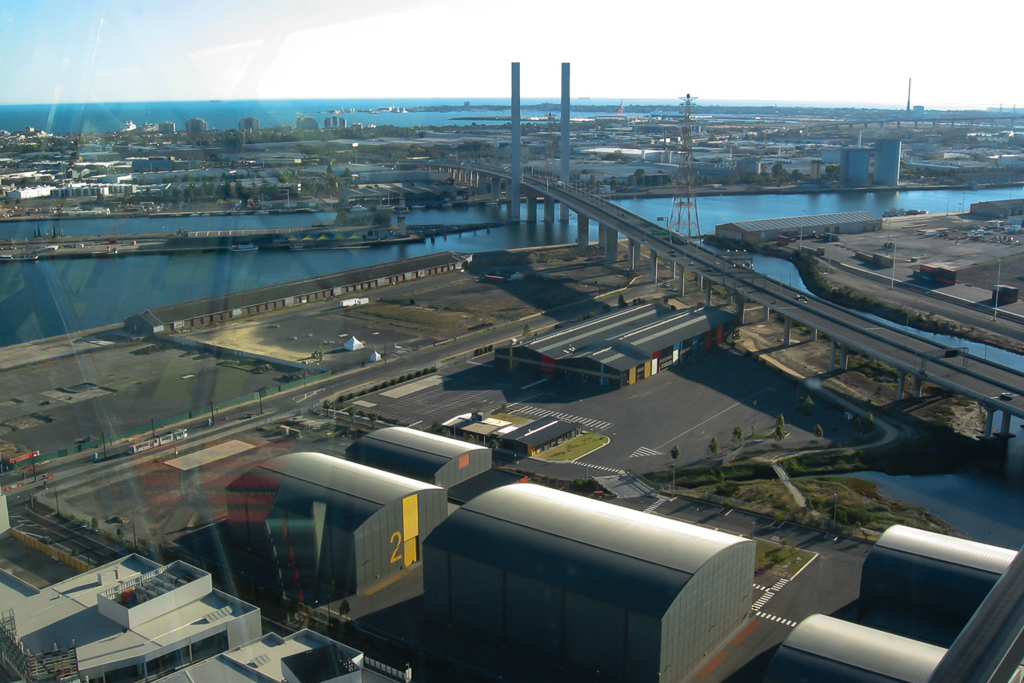 Mm… The wheel was going pretty slow and I wasn’t sure if I was going to survive the mind-blowing sights. I began to eye off the door and contemplated ignoring the instruction. One slight push is all it would take and I’d be put out of my misery. 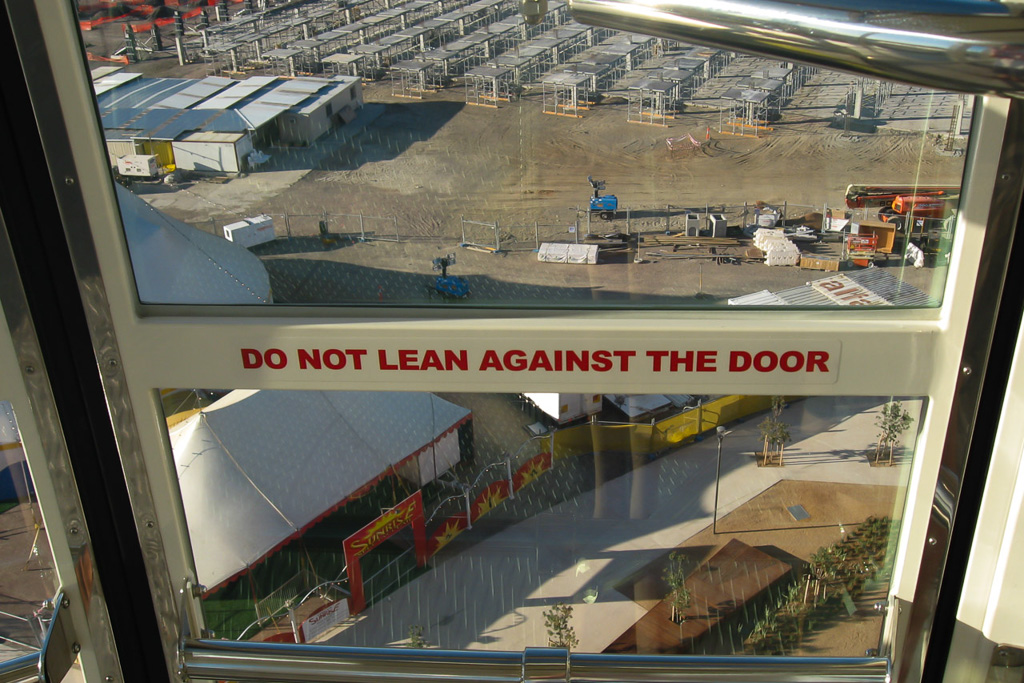 At least we had plenty of room in the cabin. They were designed for at least 20 people, so we had lots of space to lounge about. Not that we had time to contemplate such things, as we had sights to see. 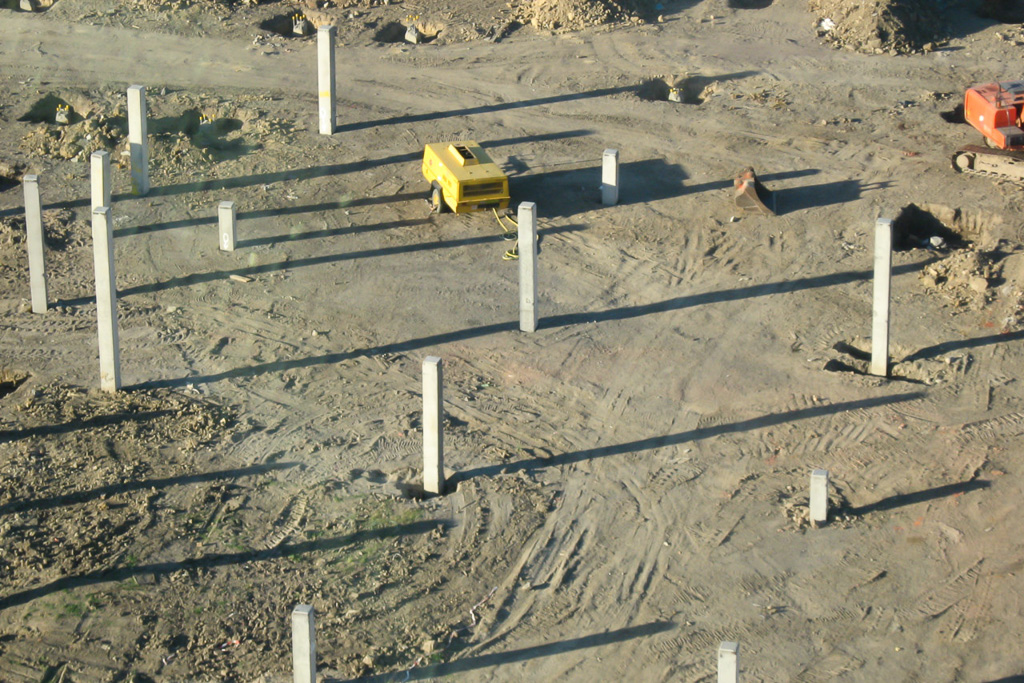 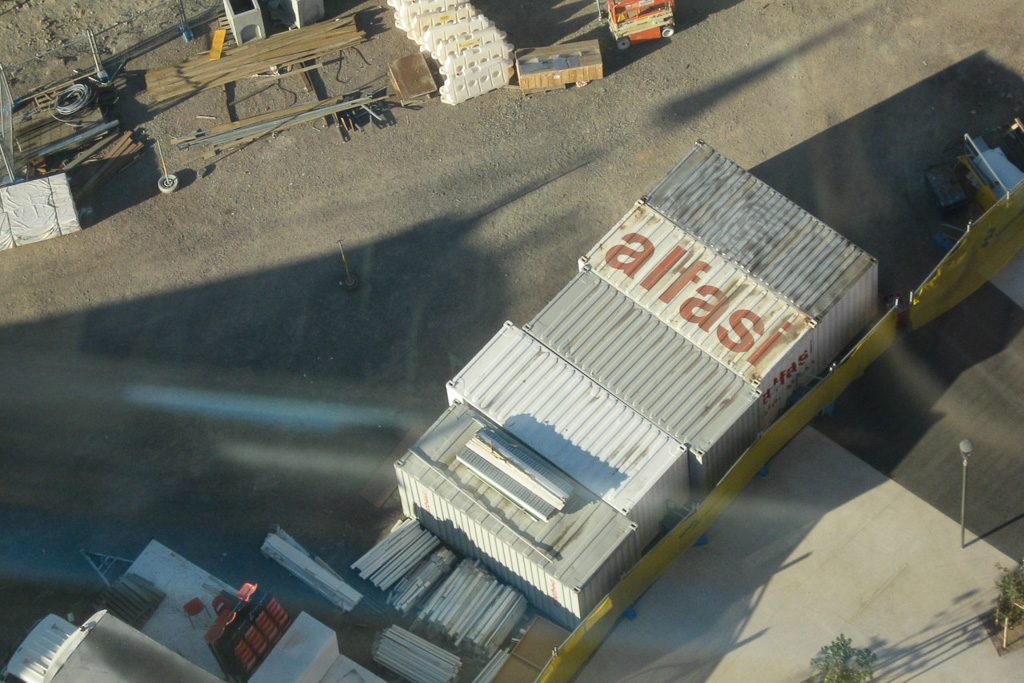 You want more, don’t you? Okay then, you asked for it. 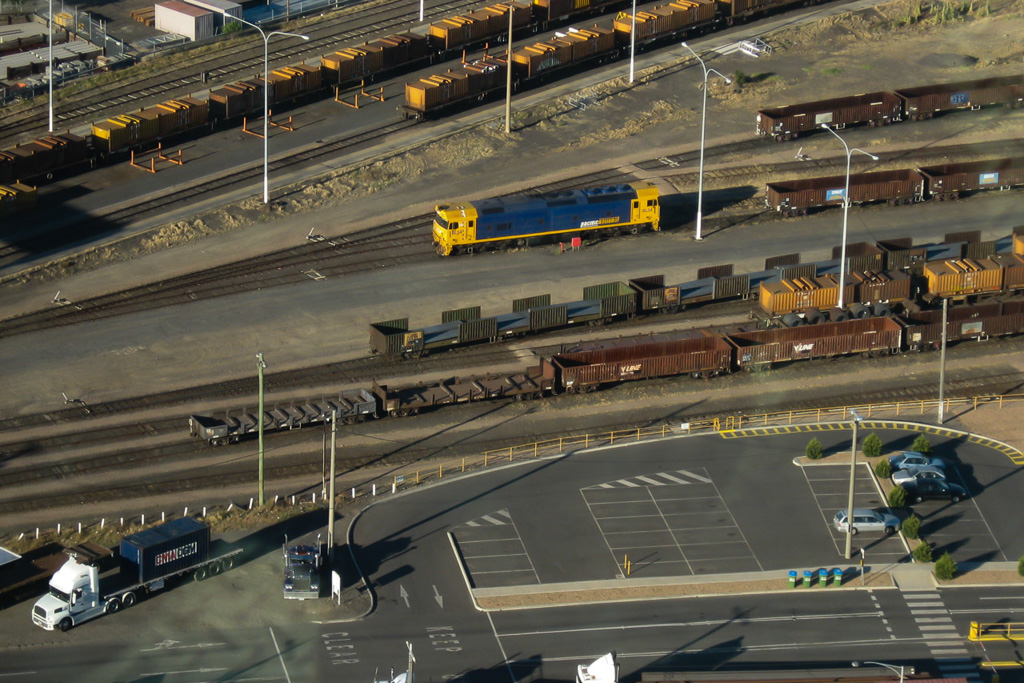 Yeah, that’s what I’m talking about. A blue locomotive.

It wasn’t all doom and gloom though. I got to admire some impressive circle-work on a nearby carpark roof. 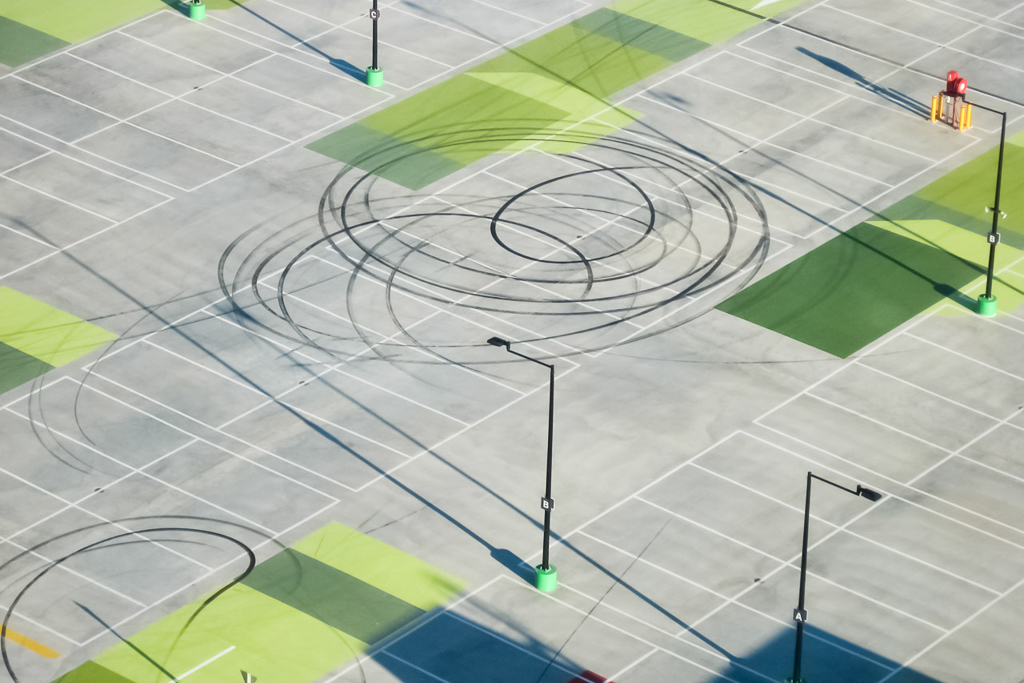 I guess we had a reasonable view of the city skyline. Yeah okay, in the next photo it’s blocked by an empty cabin, but the picture after is better. 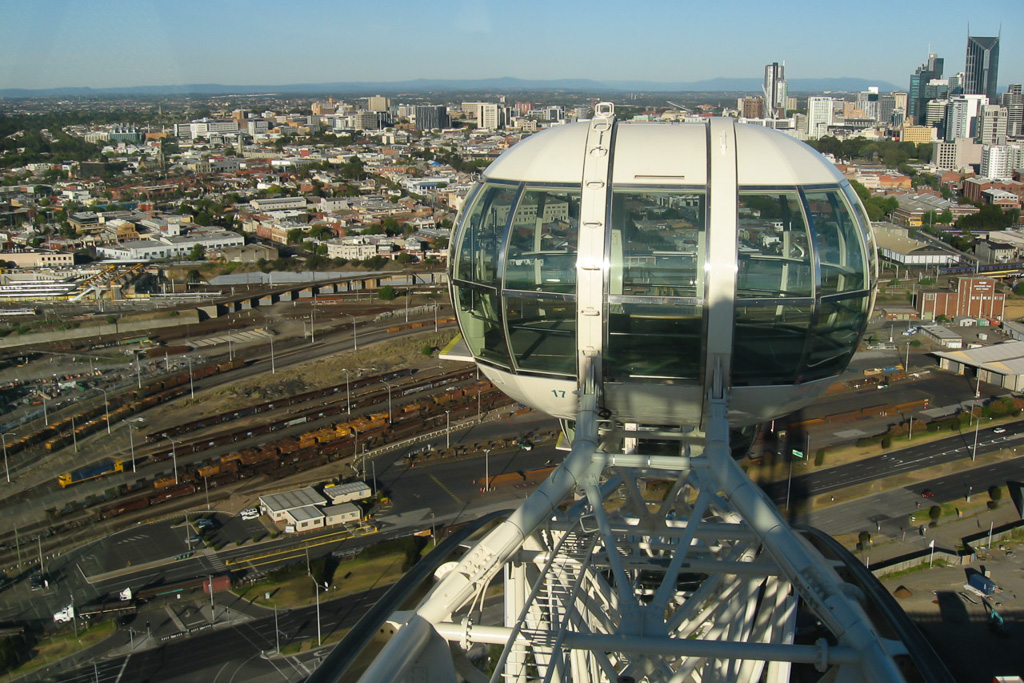 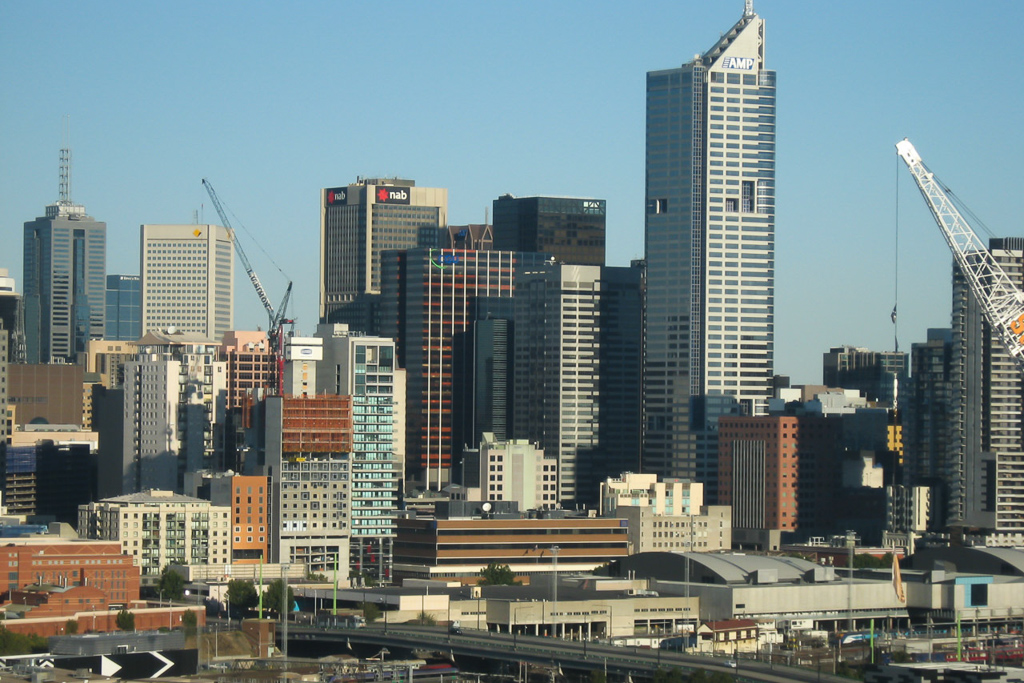 You know what? That’s about it. The wheel crawled back and after one revolution we had to hop out. Seeing how every cabin was empty, you’d think they’d let us go around again wouldn’t you? Then again, I’m not sure if I could have taken the excitement.

It was a trauma having to leave the air conditioned cabin, but I wasn’t done. During the descent a random barking voice told us to stand against the window of the pod and stare out into space in order to have a photo taken. We did this and I wanted the photo, as I was keen for a full record of our trip.

I hunted down the photography counter which was manned by a skeletal woman who was covered in cobwebs. It wasn’t hard to find our photo and I kid you not, but this was the conversation,

She said, “What did you think of the ride?!”
I said, “Interesting.”

She said, “When someone says ‘interesting’, what they’re really saying is they think something’s crap.” On that note it was my turn to say, “Oh”.

Mind you, I had the photo and I’ve scanned it for all you fans out there. 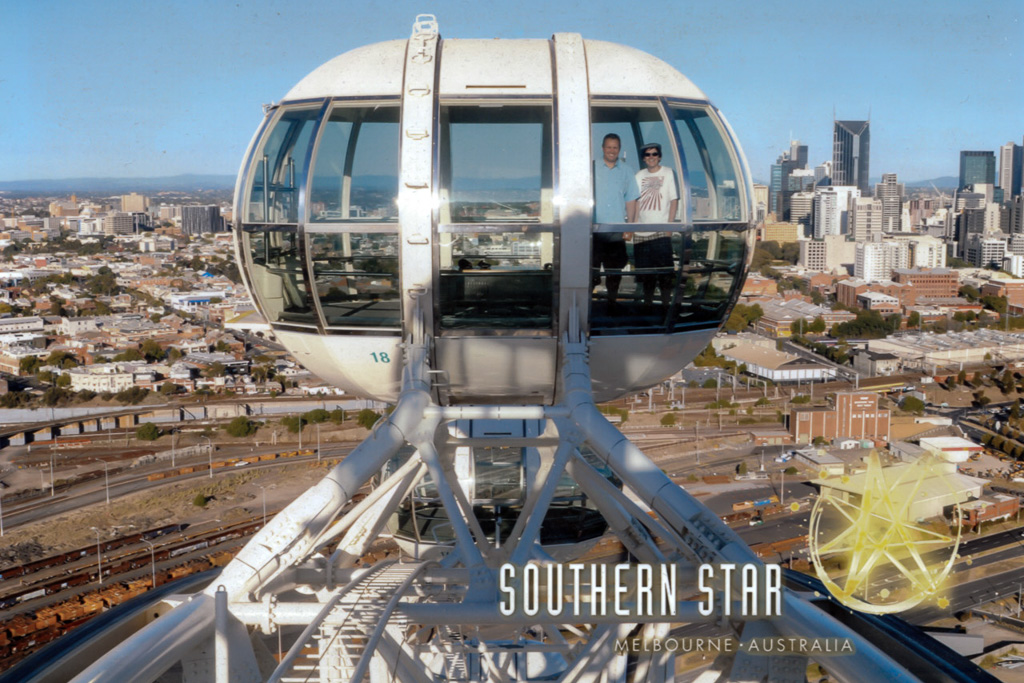 That my friends was it. Mind you, how much do you think it cost me to take two people for a half hour ride with the photograph thrown in.? Utilising the web archive ‘Wayback Machine’ I was able to look at the Southern Star website at the time of our trip and worked out the cost. $29 per person and the crazy photo above was another $17. Yep, a lazy $75, which I’ll never see again and they wonder why it bombed? I shouldn’t complain though, as it was quite cheap for the ‘euphoria of soaring flight’.

Anyway, mission accomplished. I got to ride it before it went bankrupt, although as we walked away I felt a little sorry for the human wreckage sitting in the gelati stand. I noted as we passed he still wasn’t shifting any sugar.

Is that it? Well, no, you’re not going to get off so easy. Believe it or not, but exactly two days after our trip into orbit, the Southern Star was closed due to cracks in, well, all over it. I blamed Ben for all of his jumping in the cabin at the start. So, essentially during our ride was the thing falling to bits? Maybe, but I wondered how cool it would’ve been if the wheel had become detached whilst rotating. We could have become the world’s largest pinwheel rolling down the street. That would have been like nothing on earth.

So, it’s been closed for the past three years, whilst it was dismantled and subsequently the eternal rebuild is going on. Some day (maybe) the white elephant will be back to rotate in silence with no one on it. I pass it on the days I walk home and it’s looking a little dodgy, although without cabins it would be a way more exciting ride.

Oh yeah, remember at the start how I was going to finish this post on Friday night after my refreshing snooze? Well, that didn’t happen. It’s now Saturday morning. 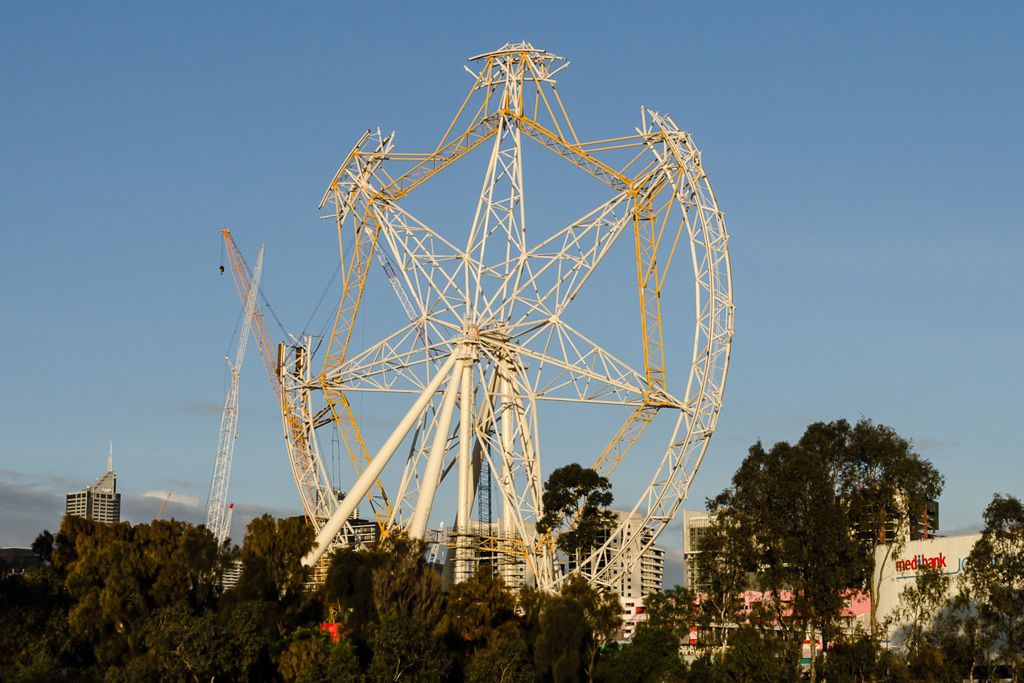 In finishing up, I consulted my friend Walter White during a trip into the desert and asked him, “The Southern Star. Is it possibly one of the most hyped, but in the end, most crap tourist attraction to have ever existed?” His reply was emphatic. 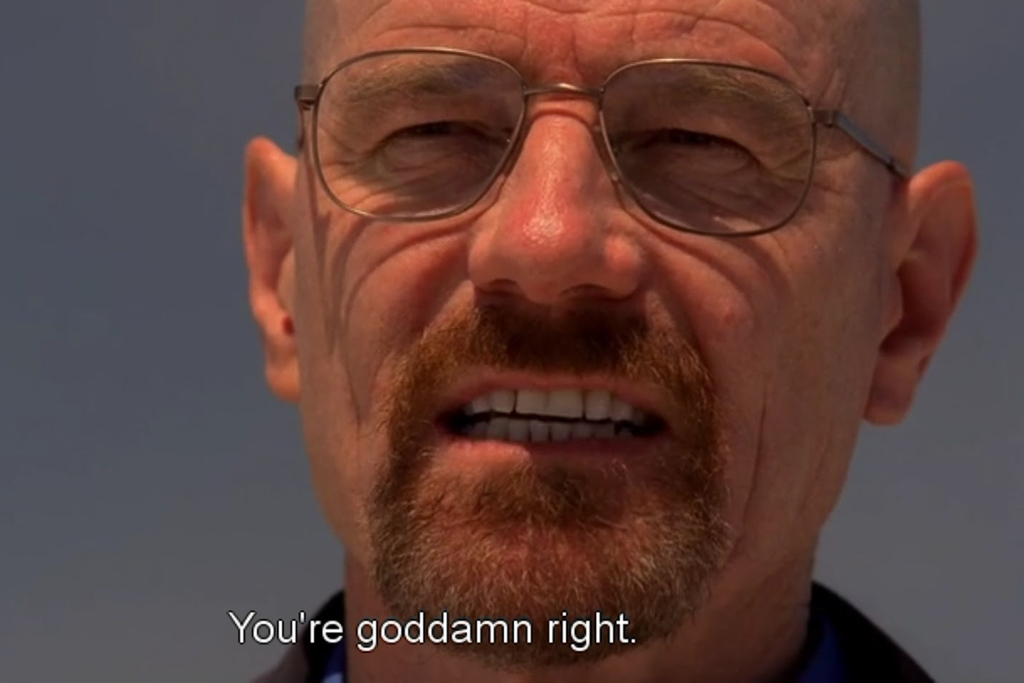