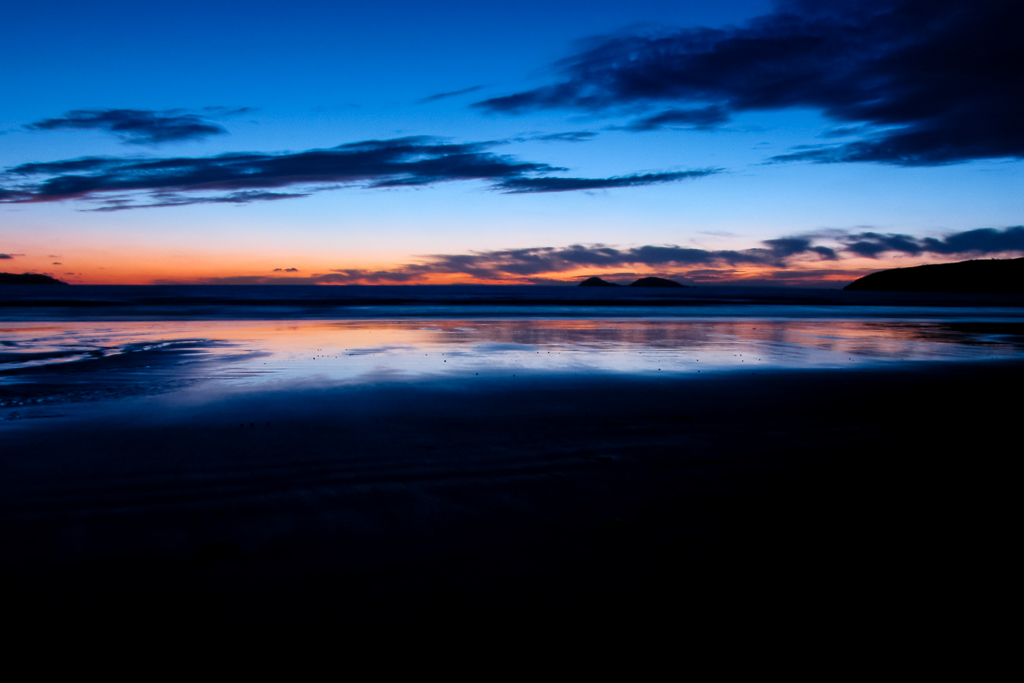 Check out the date of this walk. You may well ask, “What’s going on?” All I can say is it’s retro time. There’s a couple of reasons why I’m posting this a few centuries since I did the walk. One is I have a new computer, which means I’m looking at old photos and reminiscing as they upload in super quick time. The other is I was meant to walk last weekend, but instead I spent a lazy Sunday on the couch polishing my trousers. I have to write about something to keep the infernal blog ticking over and this will do.

Actually, it’s not before time, as even though this walk was only two years ago, it’s already a bit hazy in the brain. I think Alzheimer’s has kicked in a little early at my place. I can barely remember what happened last week, let alone this hike, so I thought it’s best to get it in print before I’m totally written off. By the way, I’m dreading the day when I go to work and suddenly realise I forgot to put my pants on.

Telegraph Saddle to Oberon Bay was the first day of a five day jaunt around the Wilsons Promontory southern circuit during winter. It was Ben’s first multi day hike and it was only a few days after I’d finished the Great Ocean Walk in Victoria. I vaguely remember being tired when I started and as it was the early days of getting back into hiking, I was carrying kilos upon kilos of crap we didn’t need! I’m not sure how I managed to lug my pack on this walk, as it’s burned into my brain that it weighed a ton.

Okay, the next couple of paragraphs are a complete bore if you’ve just come here to look at pretty photos, or you’re from somewhere like Venezuela and have no intention of visiting Victoria. I need to outline my initial plan though, don’t I?

The intention was to visit during winter, as Wilsons Prom can be an insanely popular spot in the warmer months. The area has every right to be well attended, as it’s a fantastic walk which we thoroughly enjoyed. Was there a plan?

Well, without too much detail, we were aiming to do a circuit and stay at most of the well known camping spots each night, plus one night at the isolated Wilsons Promontory lighthouse. Actually, that wasn’t the plan until I spoke to my lean, mean, hiking machine friend MK who set me straight. The instructions were simple. Stay at the lighthouse and on the first day to follow a route, which was different to what’s outlined by the Parks Victoria walking notes. 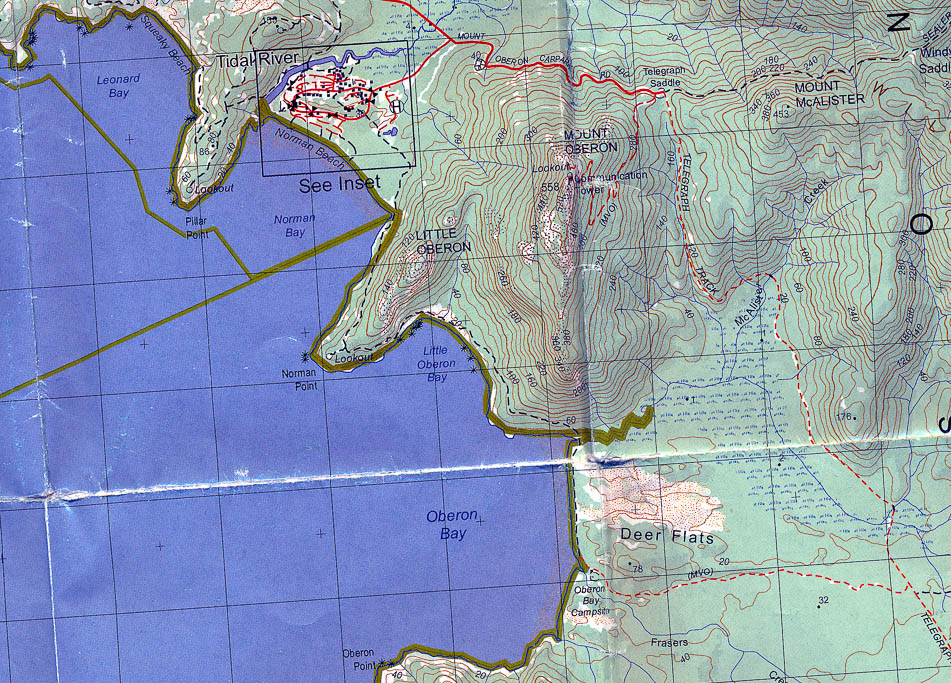 Right, look at the map above. Do you notice how wrecked it is? The damage is not important, so don’t worry about it and concentrate on other things the world’s worst scan shows. My initial plan was to camp at Oberon Bay on the first night by parking my car at Telegraph Saddle car park and walking on the Telegraph Saddle Track with a quick right hand turn to head to Oberon Bay whilst being inland the whole time.

MK quickly informed me I was deluded and the strict instructions were to leave our packs at the Tidal River Park’s Office and then park the car at Telegraph Saddle car park. We then walk on the road back to Tidal River, grab the packs and then follow the coast through Little Oberon Bay and then to Oberon Bay itself to camp. The map above shows the route if you fire up your portable Hubble telescope. MK of course was completely correct and the first day was a nice little walk along the coast without seeing anyone at all. This is a lot of writing. How about a photo? 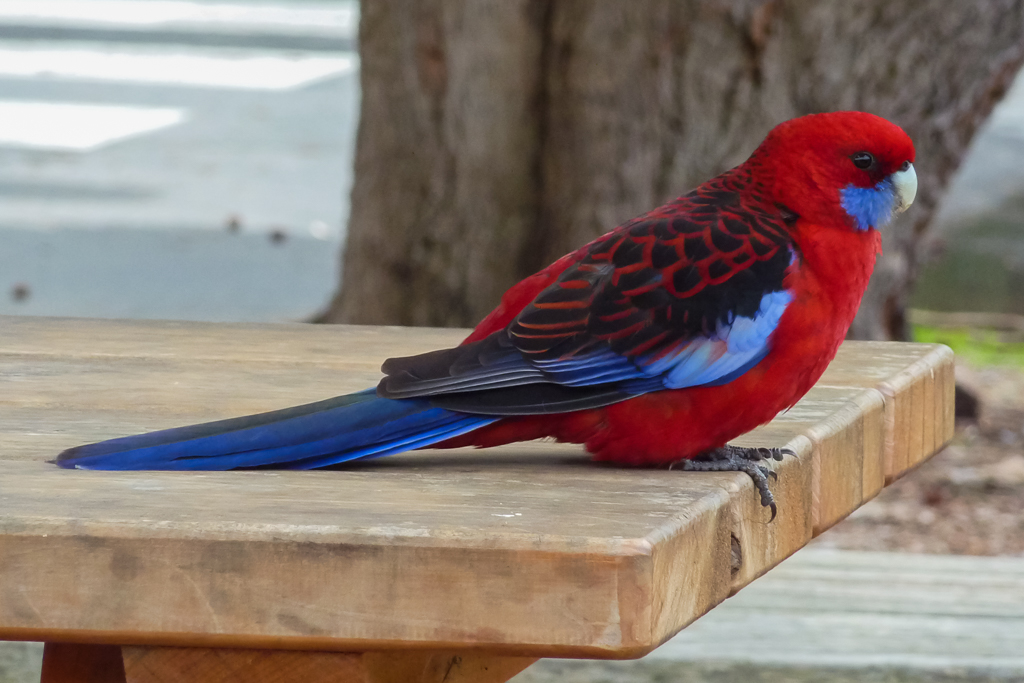 Have you been on a multi day hike before and some sort of notable news happens whilst you’re out bush and you end up missing all of the hullabaloo? Well, this walk was one of those occasions, as we drove down early in the morning and the radio was announcing Michael Jackson ‘may’ have died. We got the unconfirmed information before we lost the radio station and ended up missing the whole deal.

It’s not the first time something like this has happened to me and one day I’ll be out bush and some killer virus will wipe out the human population and I’ll end up as some sort of beefy ‘Omega Man’. It would have its advantages though, as I could raid the hiking stores and end up with every item of top shelf equipment to prance around in.

I could wear multiple Suunto watches just because I could. Blogging would be difficult though being the only man alive, so I’d have to think how I’d get more followers. Hopefully there would still be the odd zombie around logging on to check out my blog before I hunt them down and lop off their heads (after they’ve read the blog of course. I need the page hits) If not, I’m sure I’d have plenty of time on my hands to work out the problem.

Anyway, we followed our instructions and dropped off the packs at Tidal River Parks Office with the aid of a forklift. We then drove up to Telegraph Saddle and parked the car and made sure we left a special post hike treat in the boot. Yep, a bag of ‘big softie’ marshmallows was going to be the post walk indulgence. On the walk back to Tidal River we passed a large section of the park, which had been burned in the 2009 summer bushfires. That summer had been hideously hot and the fires were large and deadly. 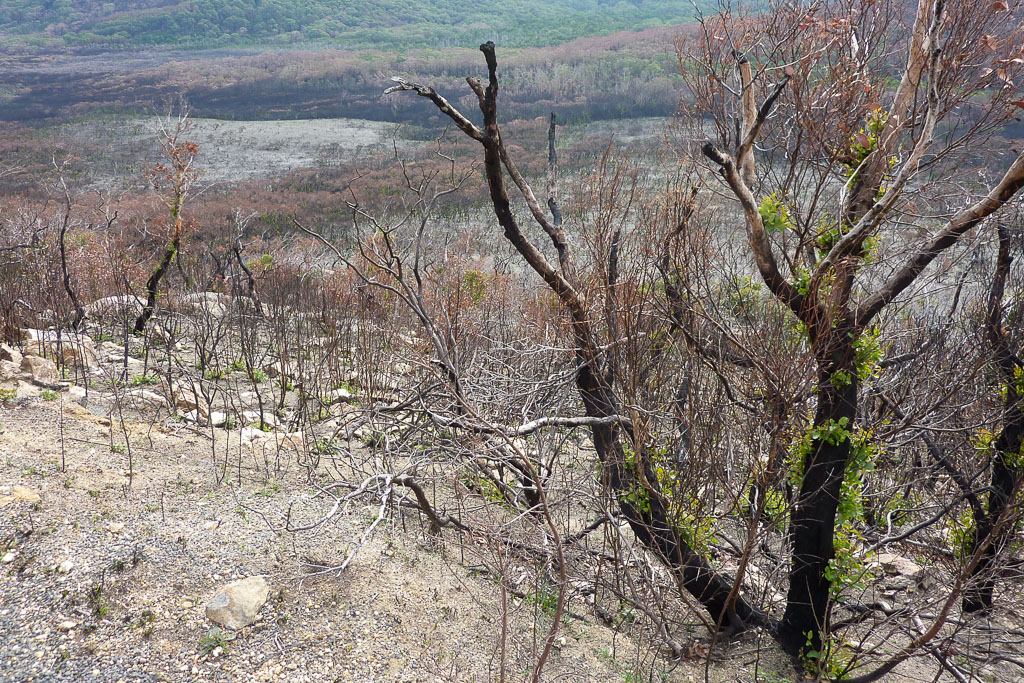 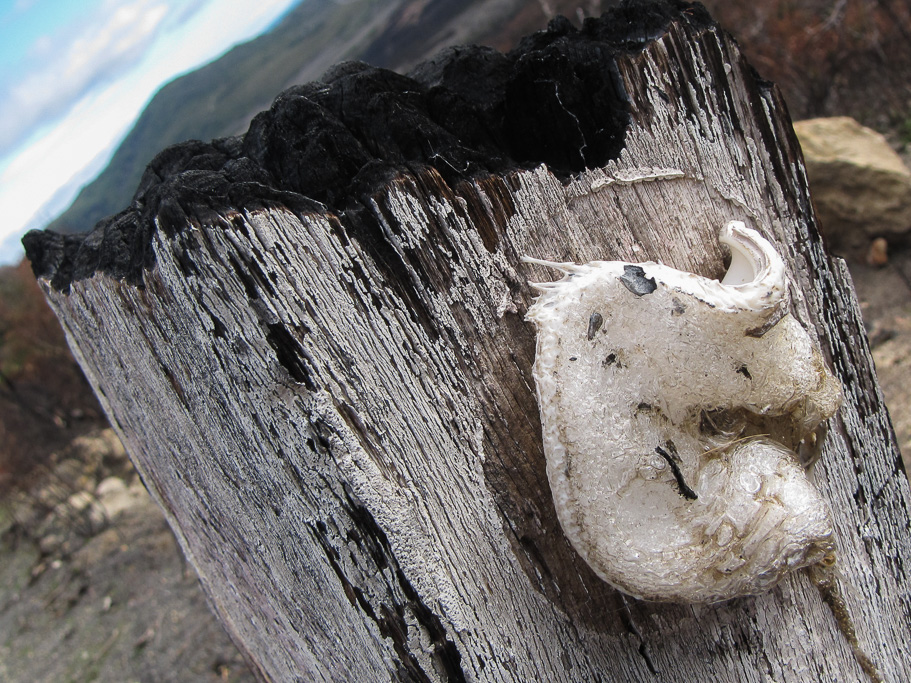 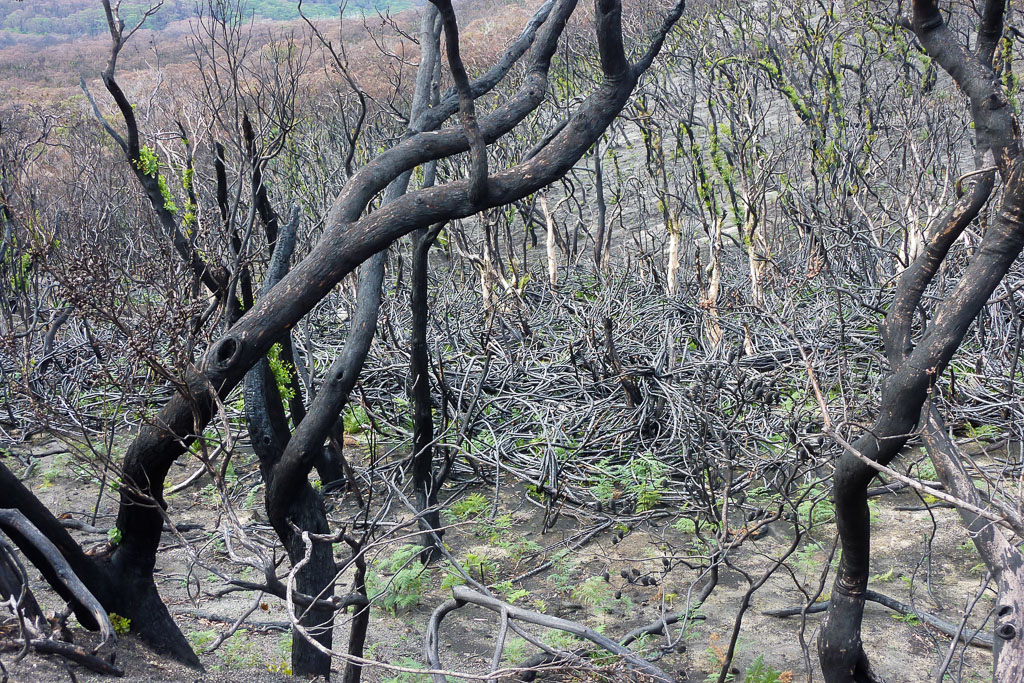 We were lucky though, as most of the burned areas were around Tidal River and we still had plenty of untouched bush to walk through over the next few days. The shop at Tidal River was also our last chance to have some hot chips before heading out. The area was swarming with Crimson Rosellas which were great to look at, until one tried to eat my ear off. I assume my ears look like hot chips. 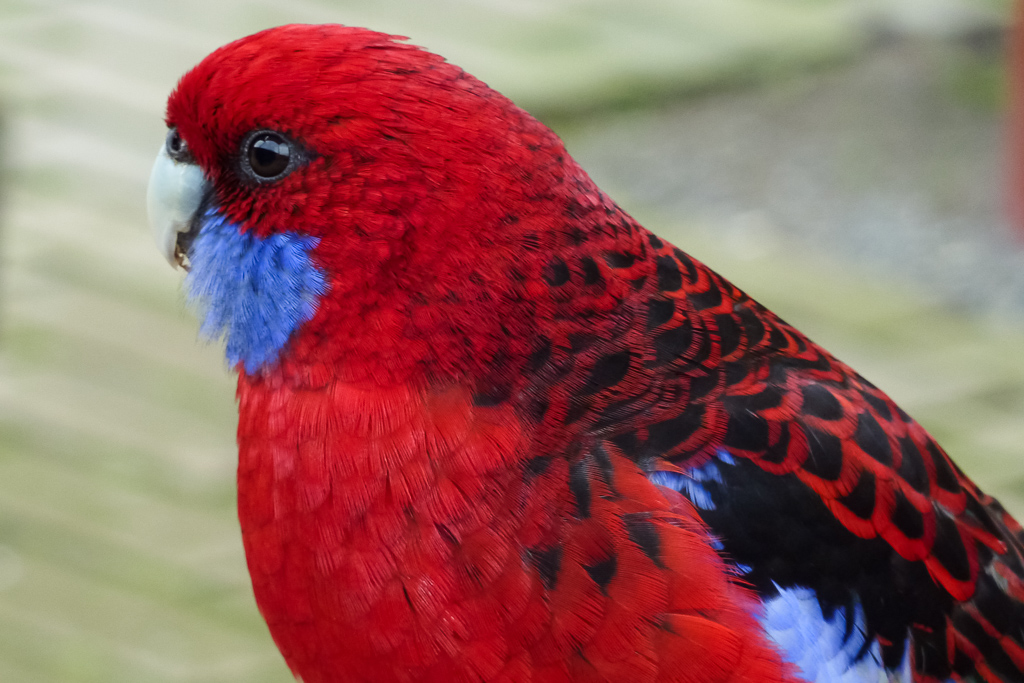 Upon picking up our packs with the aid of a Chinook helicopter we set off towards Norman Bay, which would be our first interest of the day. It wasn’t very far before we came across the deserted Norman Beach and it didn’t disappoint, as there was a wombat walking around the hide tide mark.

Being nocturnal, usually they’re quite hard to spot and I can’t say I’ve ever seen one strolling around a beach before. We tried to get a good photo of him, but as I closed in he took off into the bush and I couldn’t capture his face. Ben did manage to get a facial look, which is a lot better than what I managed. 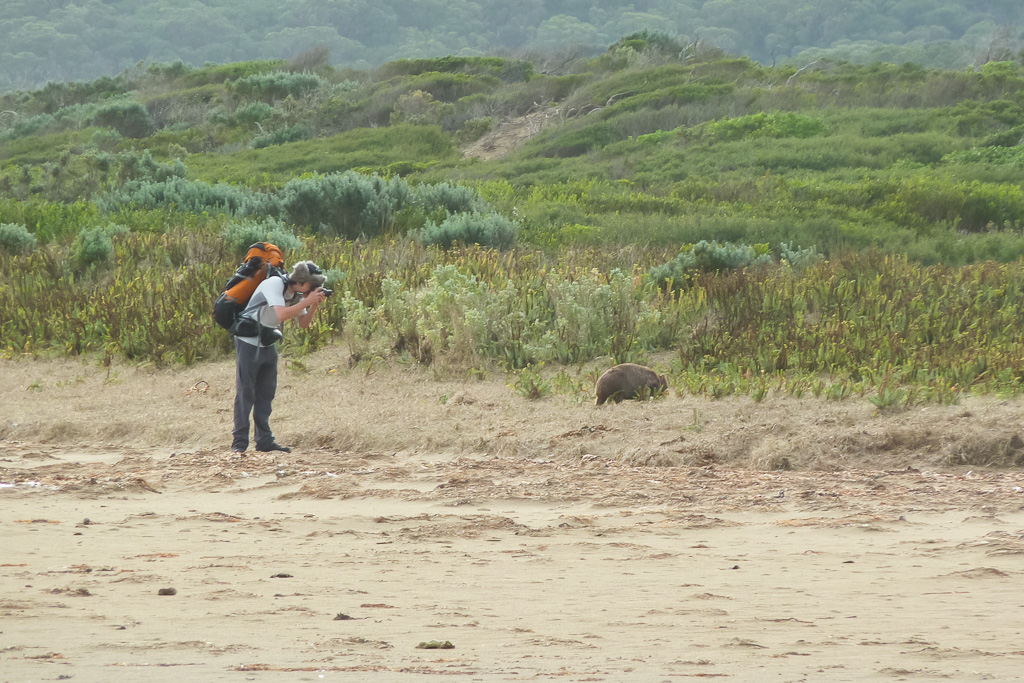 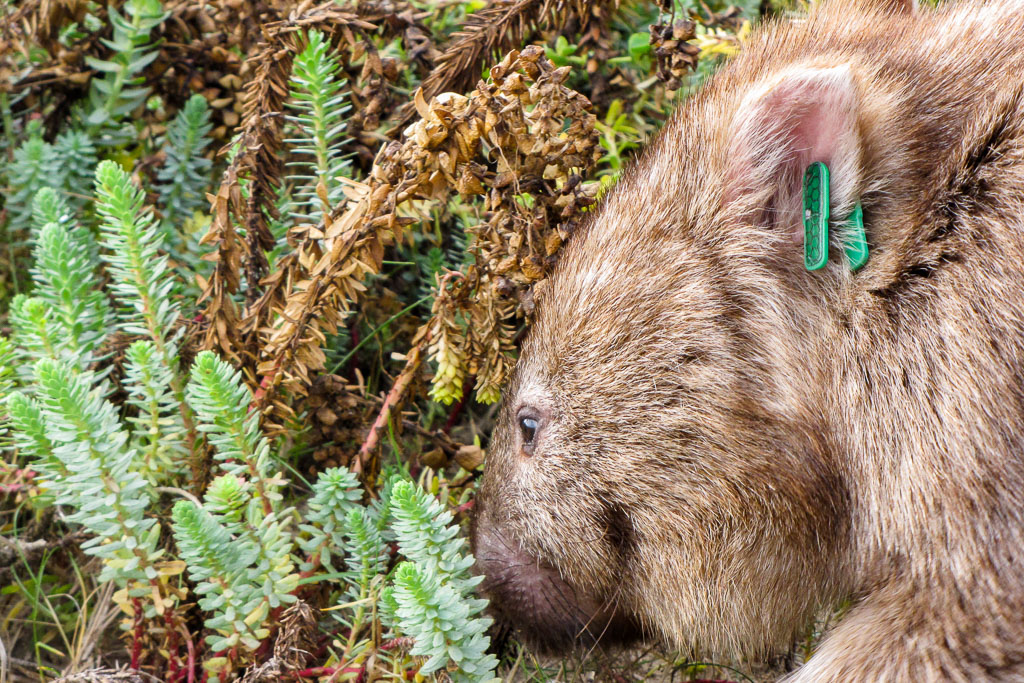 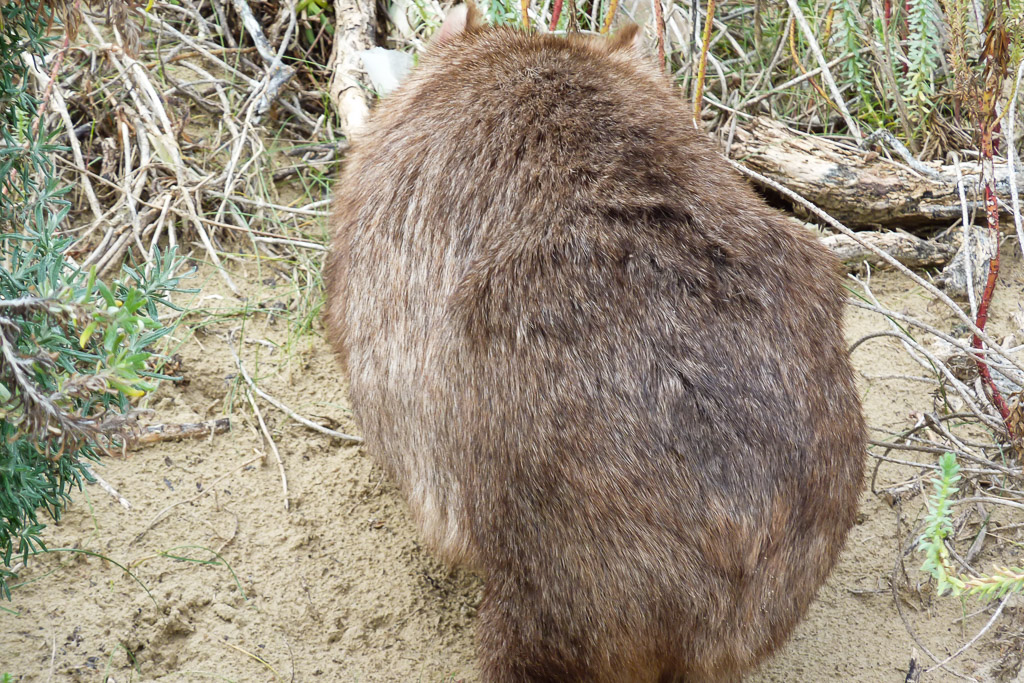 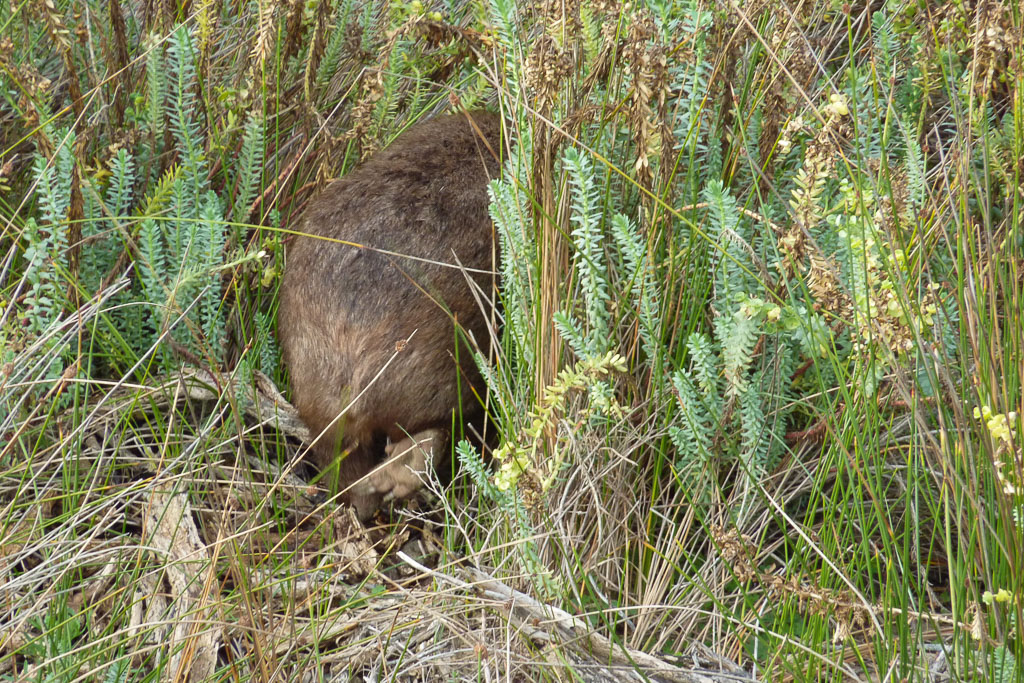 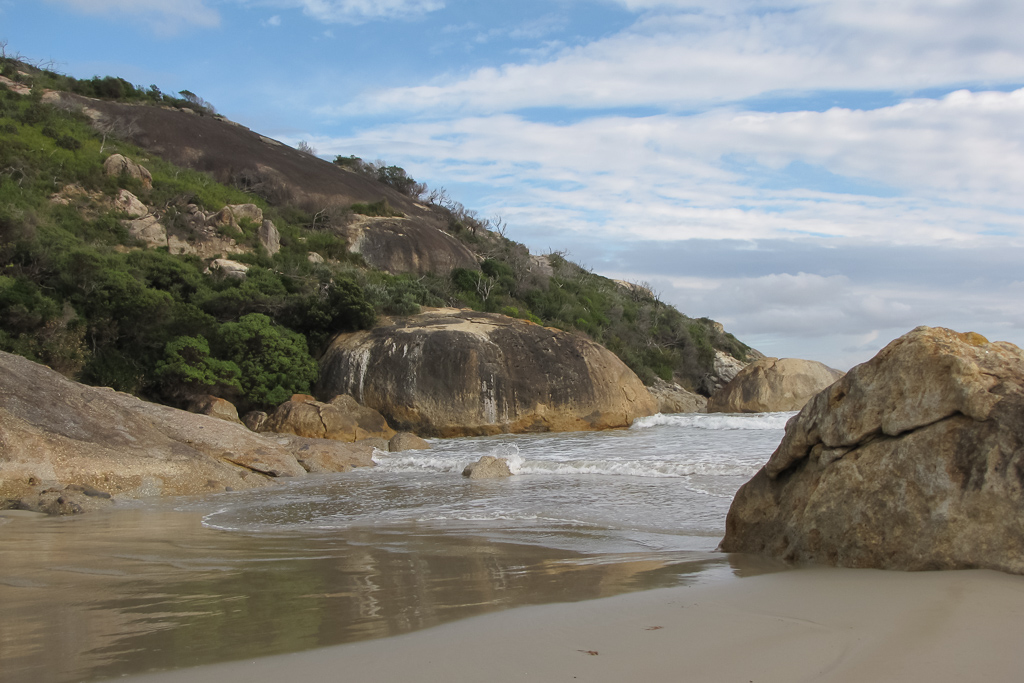 On we continued, rounding a headland until we came upon a turn off, which led to a lookout called Norman Point, that juts out into the ocean. What’s interesting is I don’t have one remotely good photo from this spot and after reviewing these pictures, I wonder what I was thinking. I was using my Panasonic Lumix, as I hadn’t graduated to the DSLR at that stage and the photos were certainly hit and miss. Here’s all I’ve got from this lookout. 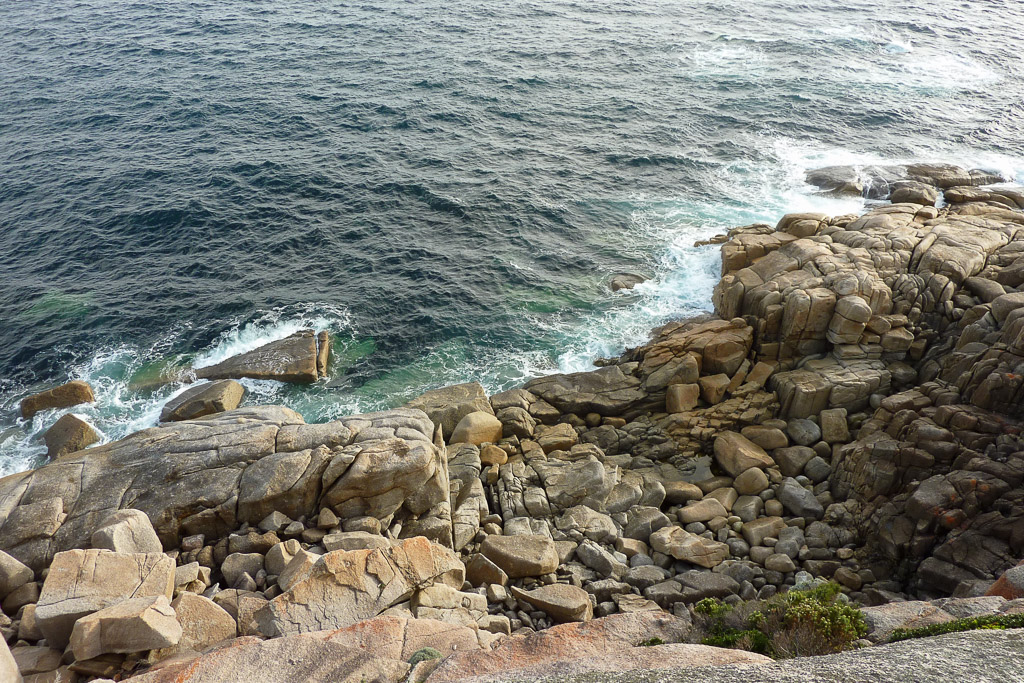 I’m not sure what I was after in the photo above as there was actually a fantastic view of a vast expanse of ocean which I somehow neglected to capture. The next picture is about the best of the lot from this spot. 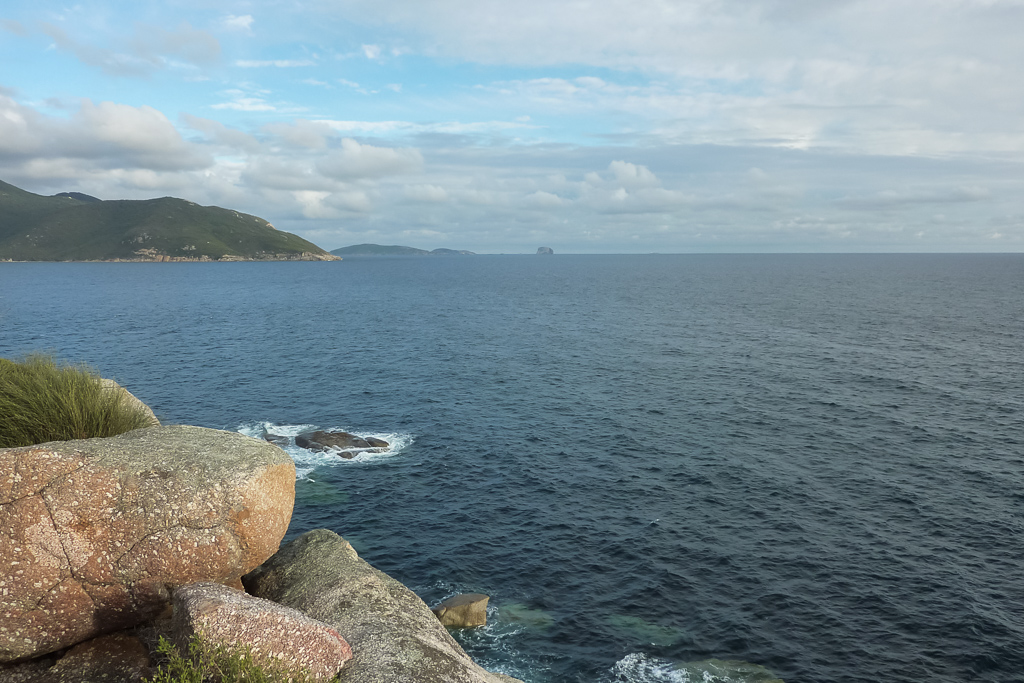 There’s some unusual looking rocky islands off shore and the next picture is part of the Glennie Group. I’m not sure which island it is though! 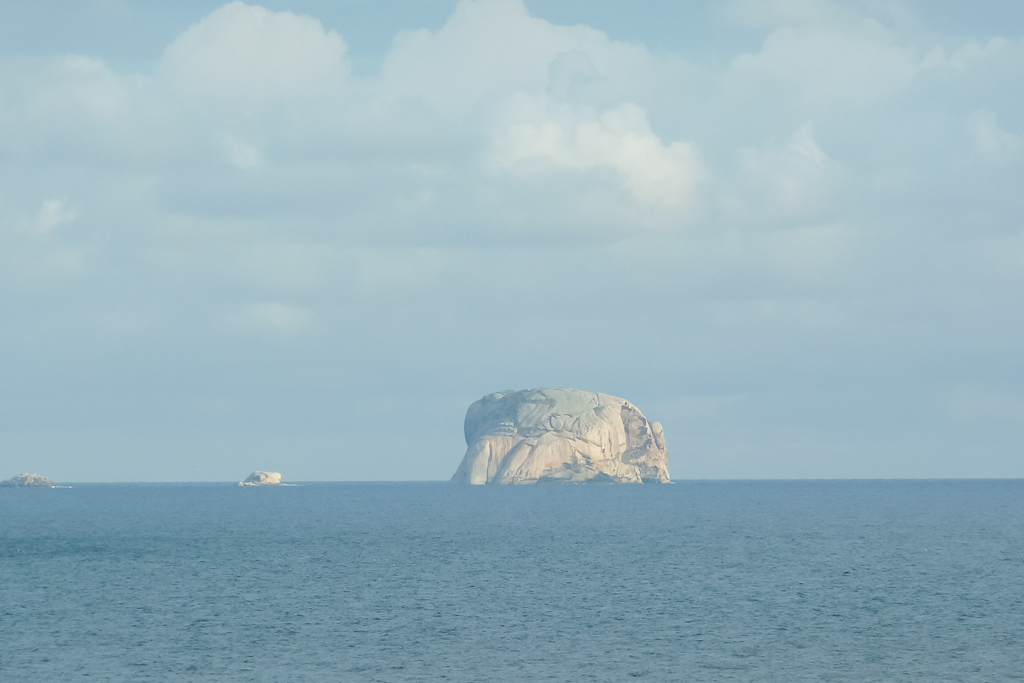 Well, that was done so on we walked with our next destination being Little Oberon Bay. The white sand of the beach and clear water looked inviting and I can imagine it would be a great place for a dip during the summer. 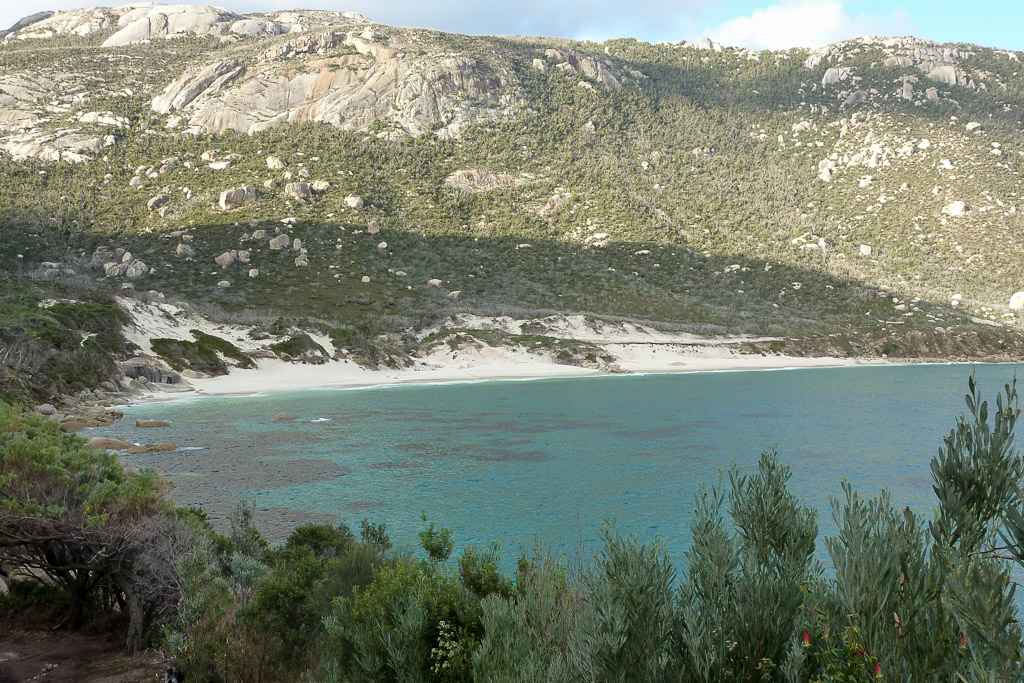 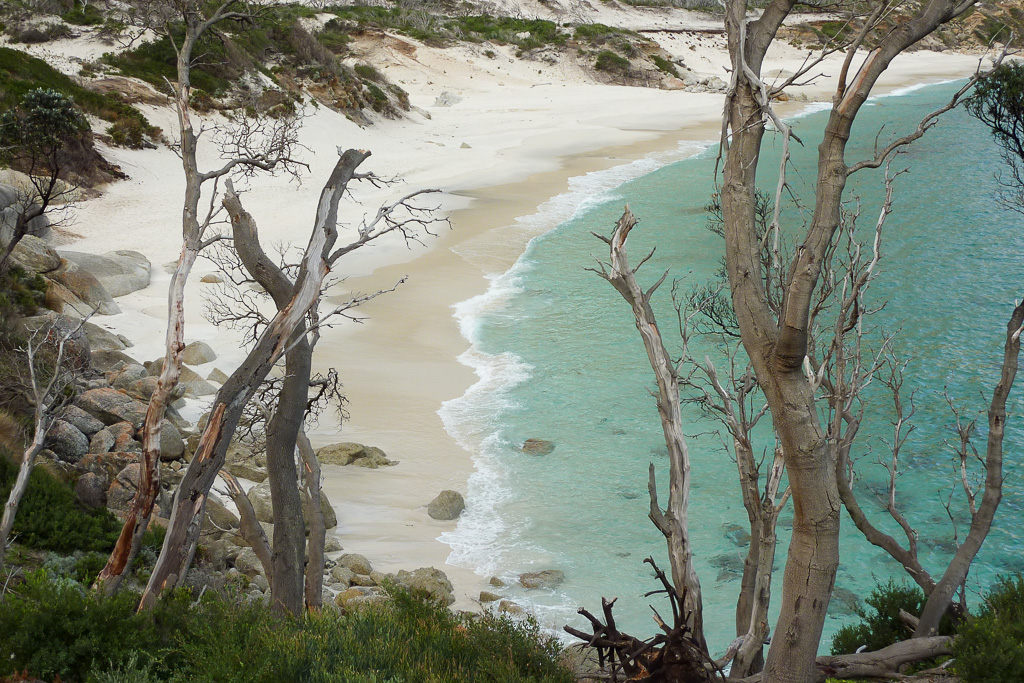 The track led down to the beach and I seem to remember a part that was a little tricky, where we had to squeeze through some rocks (maybe?!) to get to the sand. Where’s Ben when I need him? 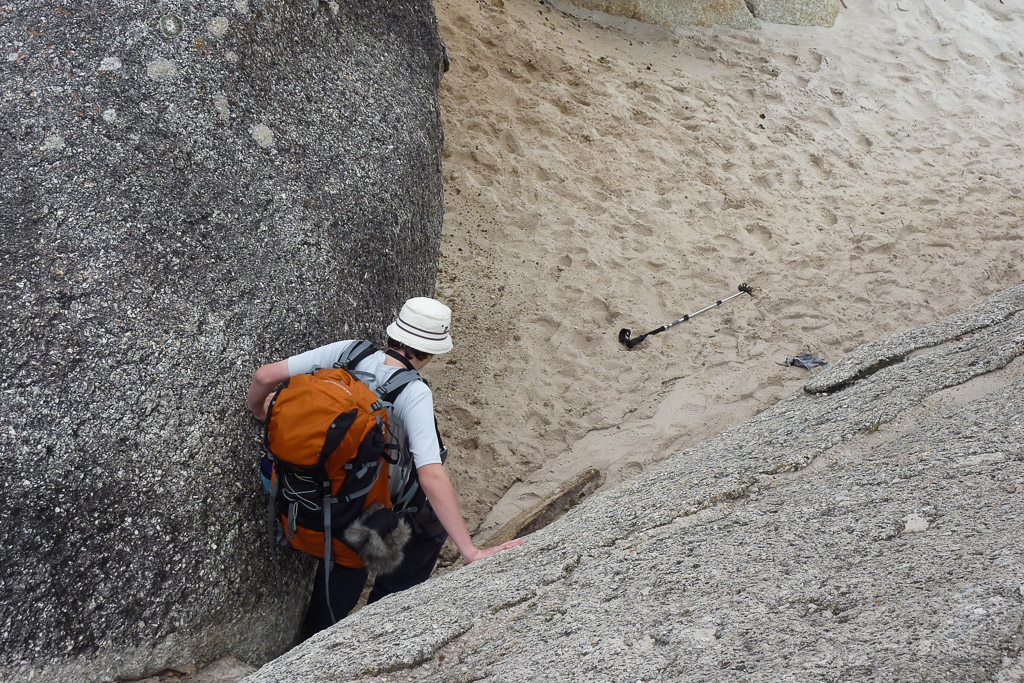 What I do remember is it was a lovely spot. We took our time strolling along this section taking in the view. 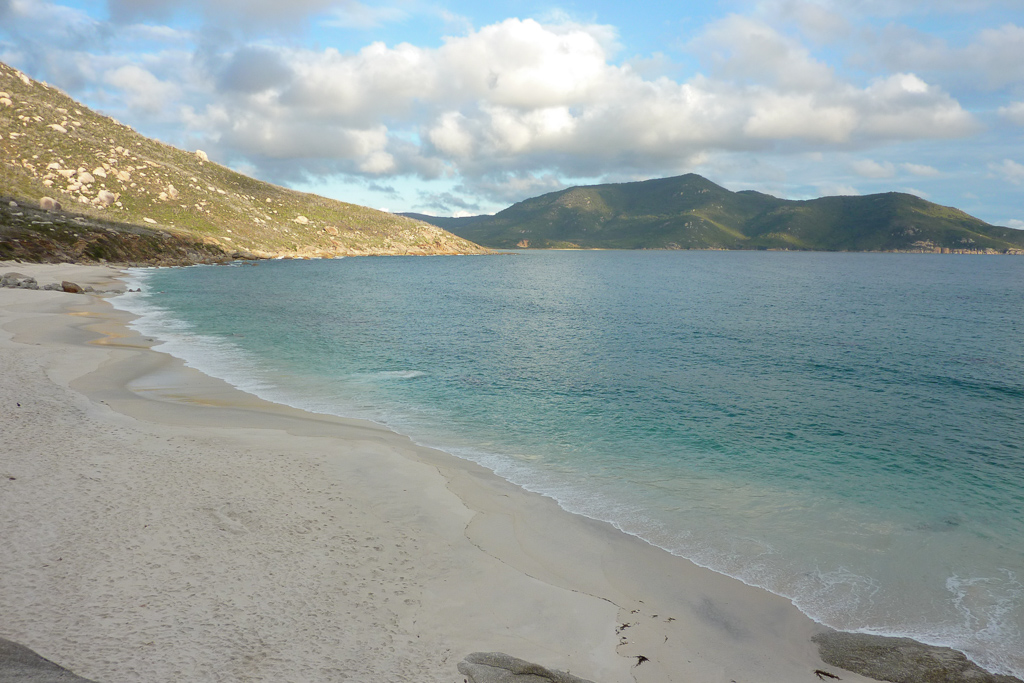 We were walking pretty slowly, which is always problematic in winter with the short day. As the sun began to dip in the sky, we had to pick up the pace a little in order to reach our campsite at Oberon Bay before it got dark.

Clearing Little Oberon Bay, we walked around a small headland and then we could see our camping destination. Behind the beach, Mount Oberon was shrouded in cloud as we began to leg it. 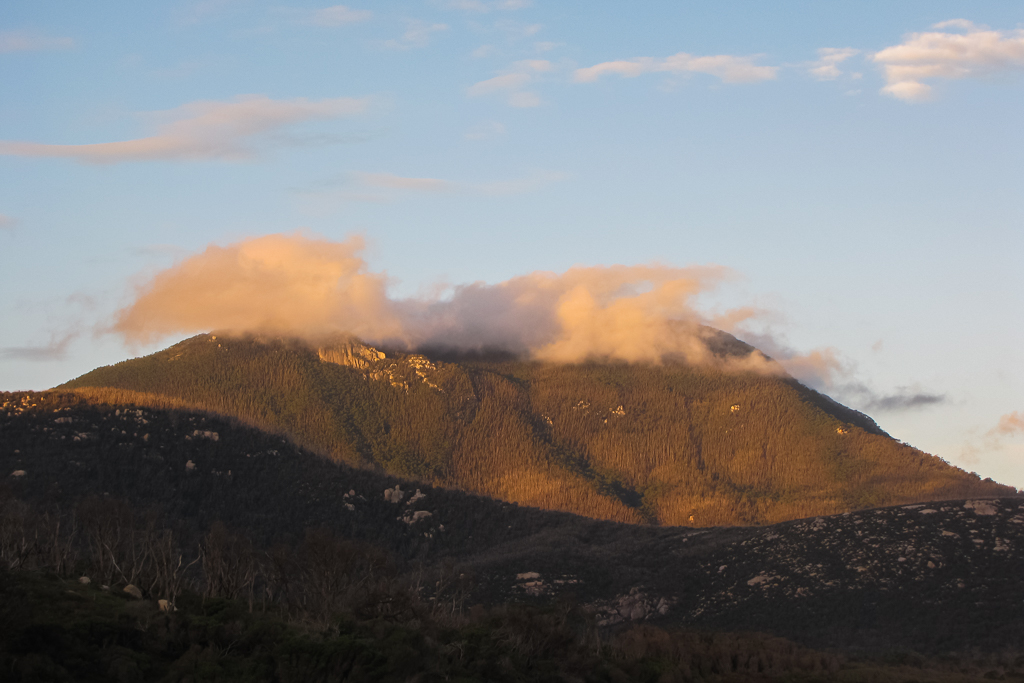 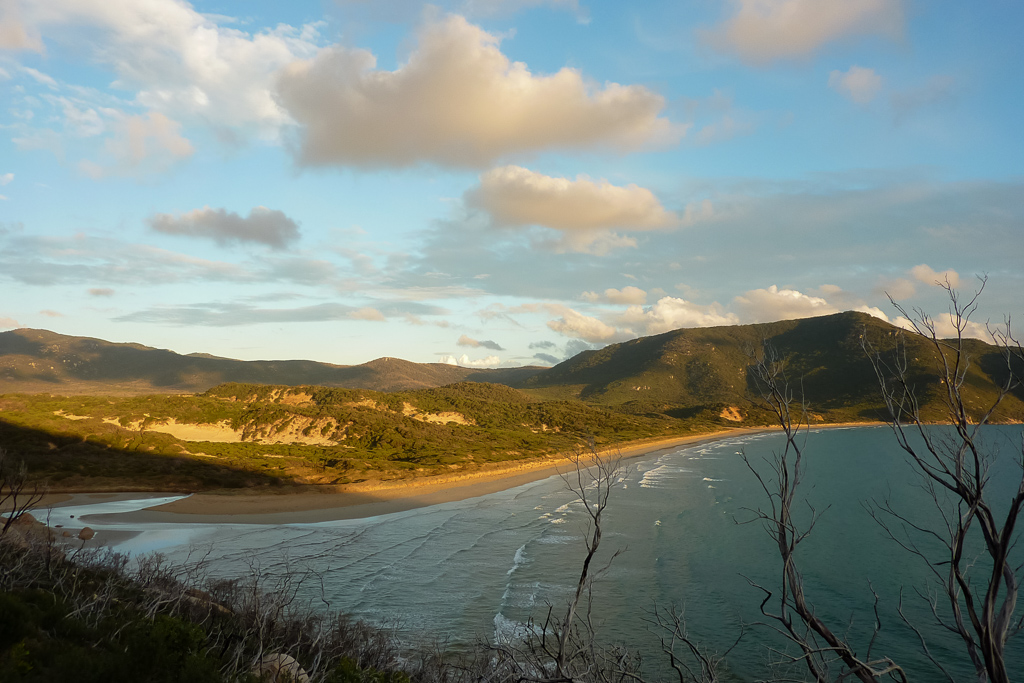 The sky was glowing from the low sun as we began the descent onto Oberon Bay beach. The campsite is at the far end of the beach and by the time we got close to it the sky was almost dark. Now’s the time for some freestyle photo action. 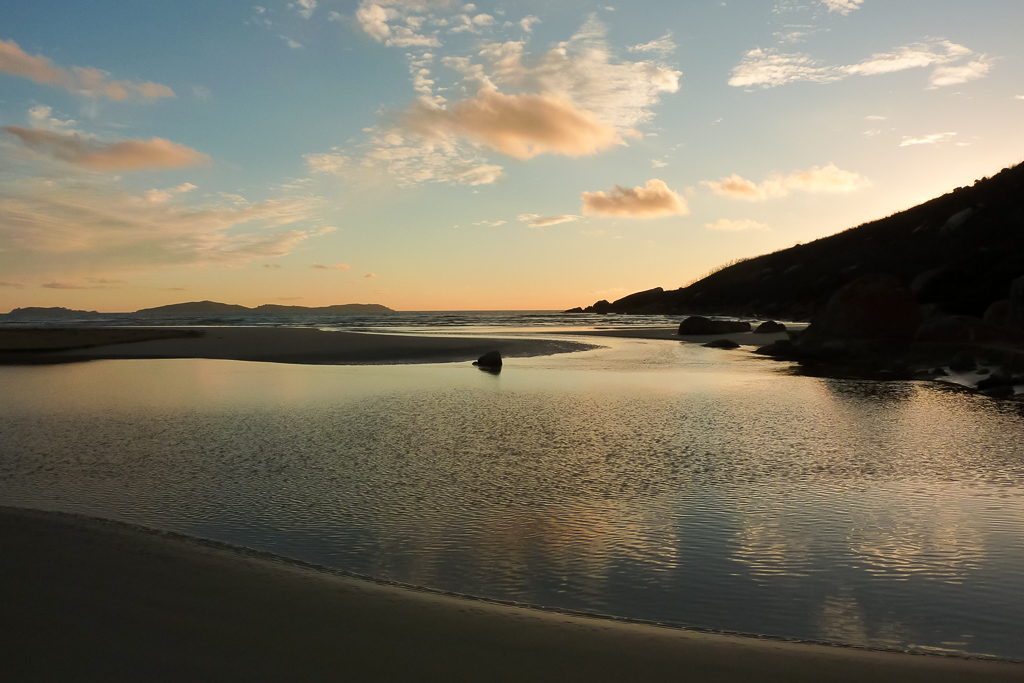 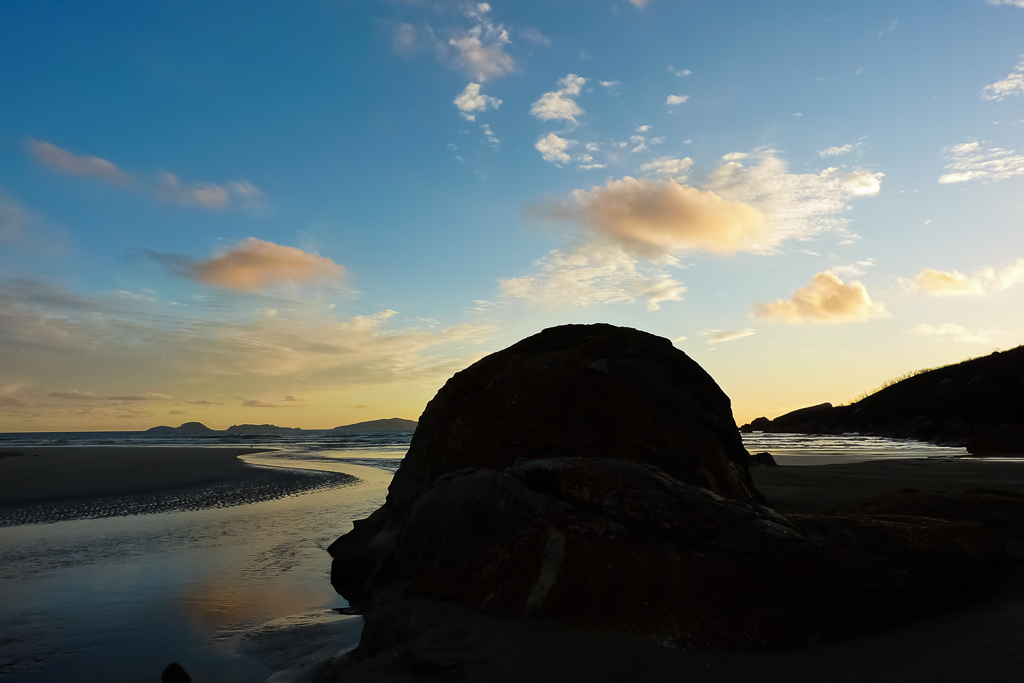 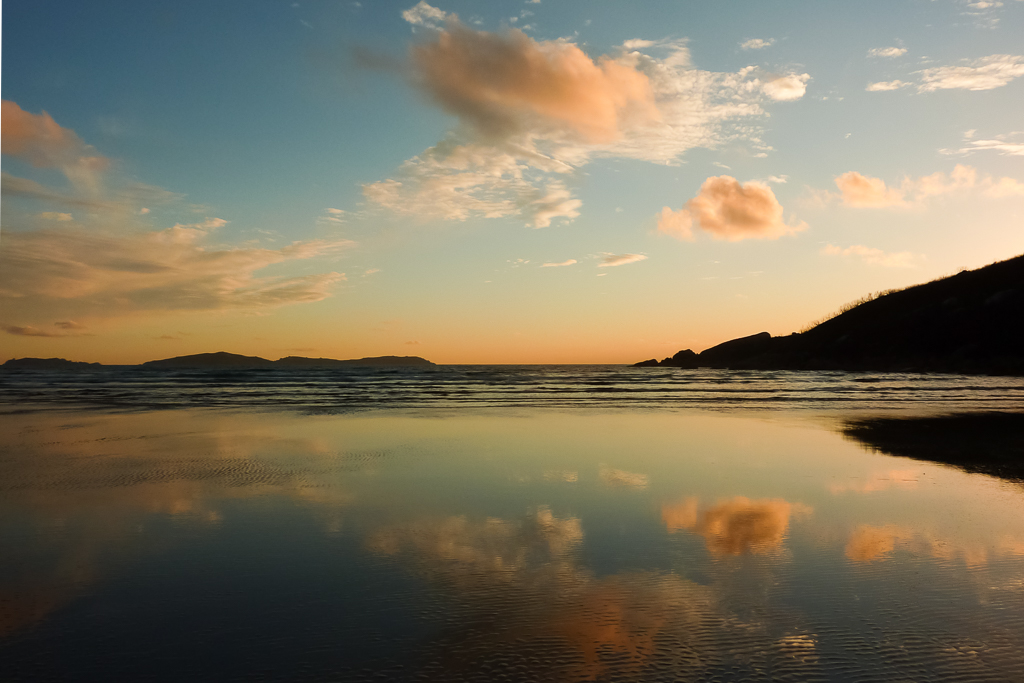 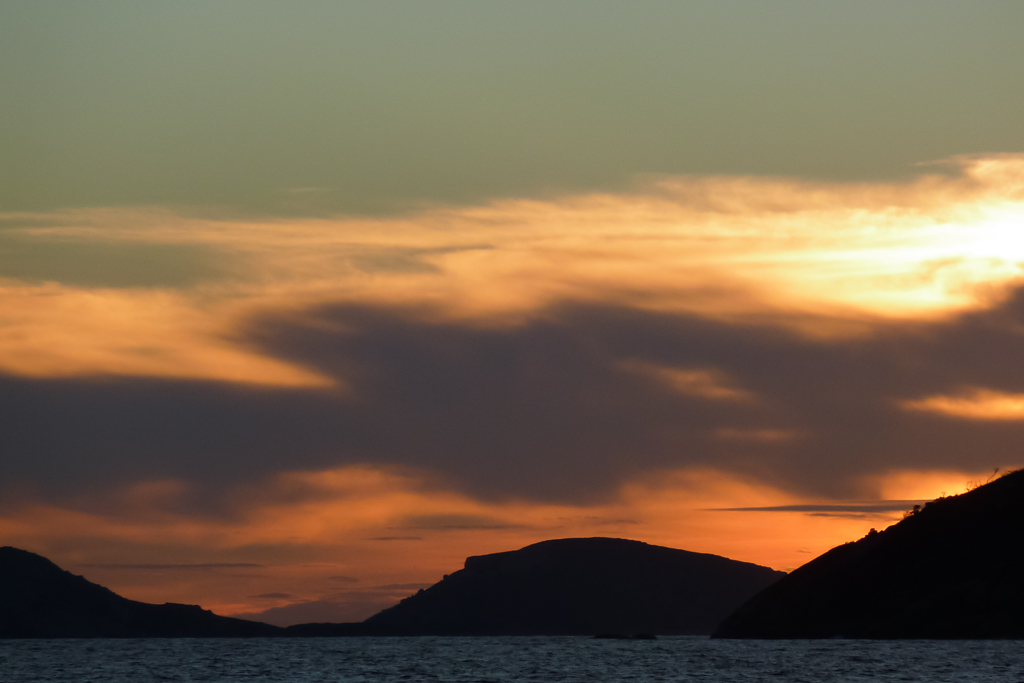 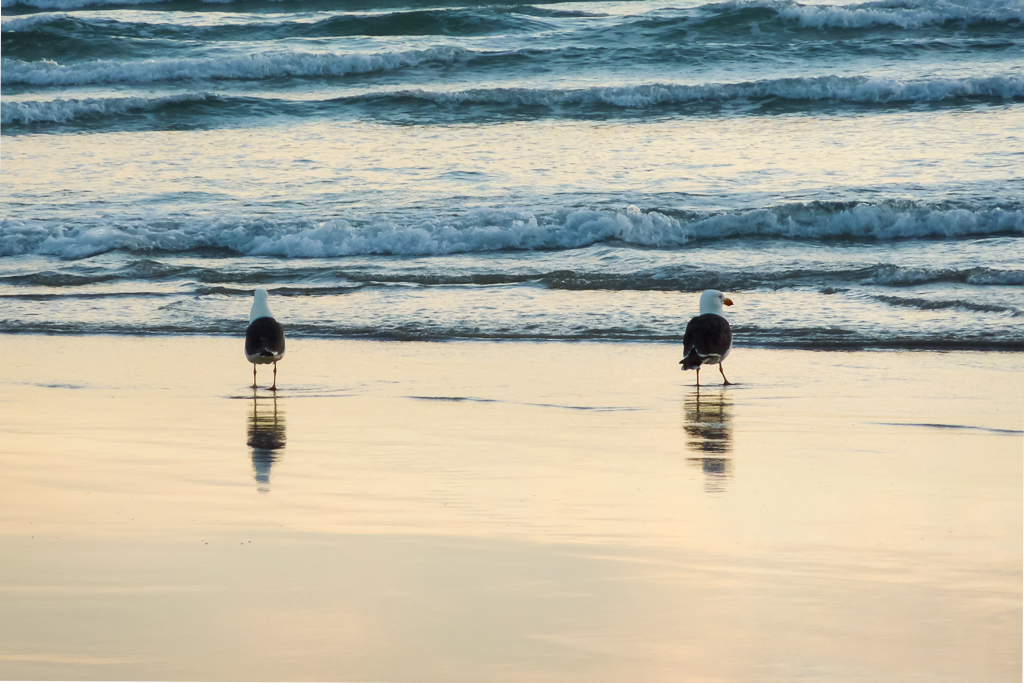 Now Ben began nailing some nice photos as the light faded. I’m not sure how he got these without a tripod. Did he have a tripod? I’ve no idea!” 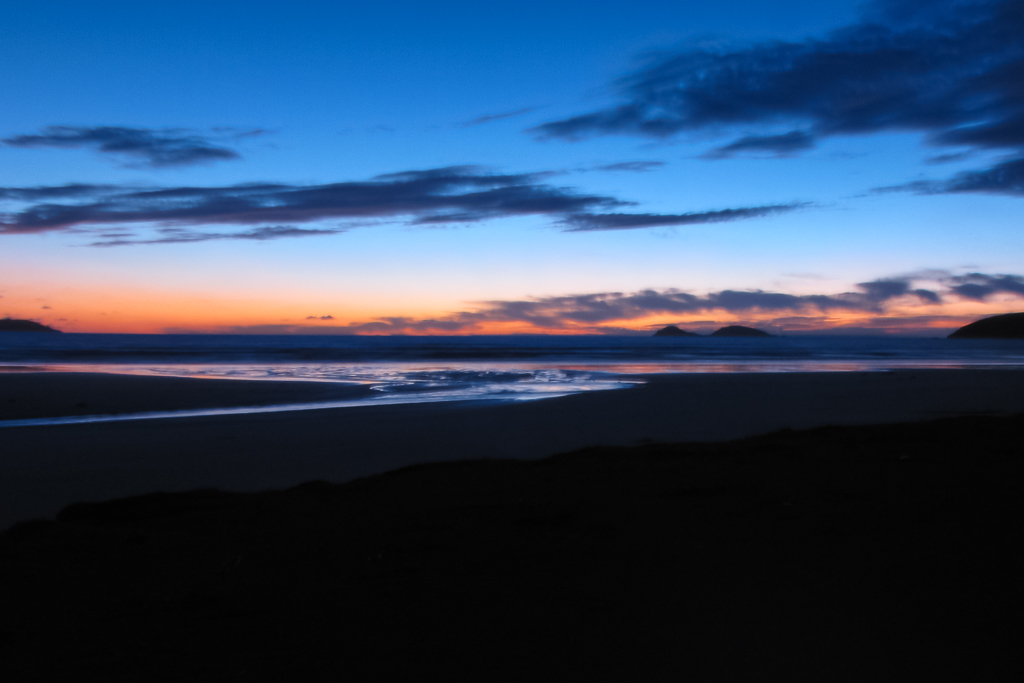 It was well and truly dark when we found our way off the beach and into the campsite area. It was deserted, which suited us fine, but setting up in the dark is never ideal. On this trip we were using a four season tent, which was insanely heavy at over 3 kg and ridiculously overbuilt for the conditions we were going to face on the coast. It’s a three pole dome that could quite easily withstand a carpet bombing from a B-52. Hiking lessons learned are always painful ones.

It was easy to set up though and then it was cooking time. Before leaving, I came across a number of those freeze dried meals by ‘Backpacker’s Pantry’ on sale. I snapped them up and was very interested in the one labelled as a lasagna. Essentially it’s just a matter of boiling some water and tipping it in the bag. How easy’s that to get a lasagna? 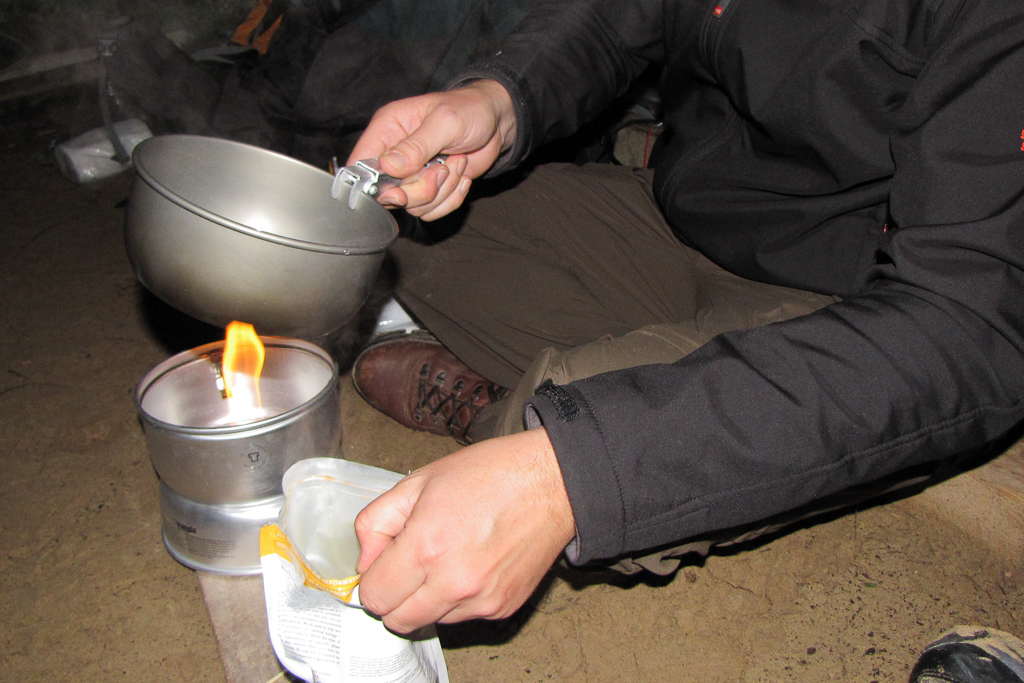 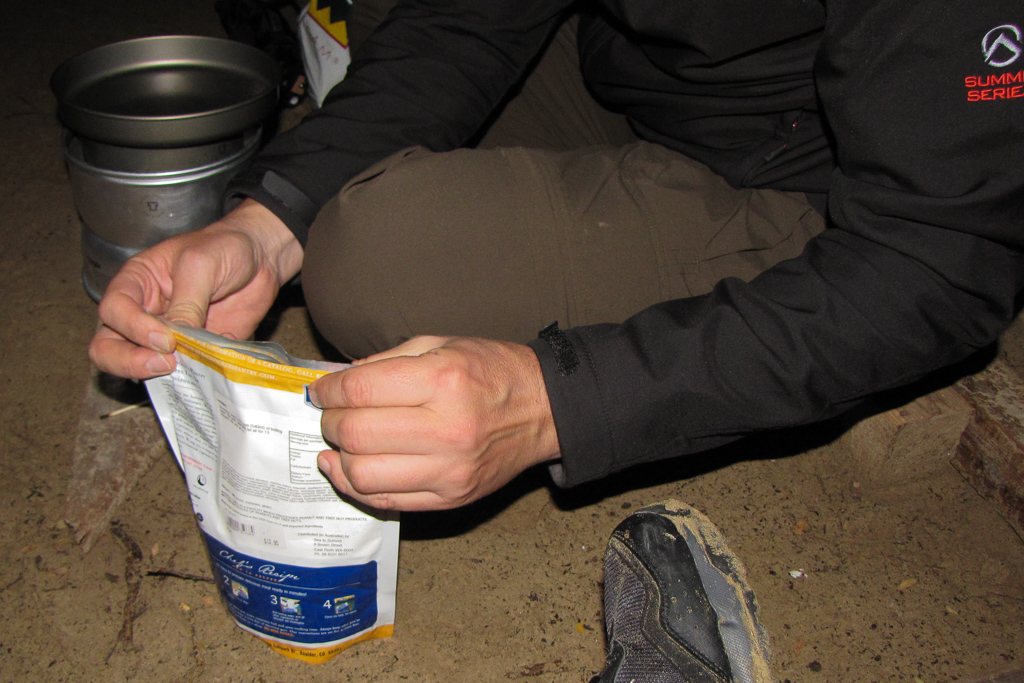 Seal the bag and wait 13 minutes. 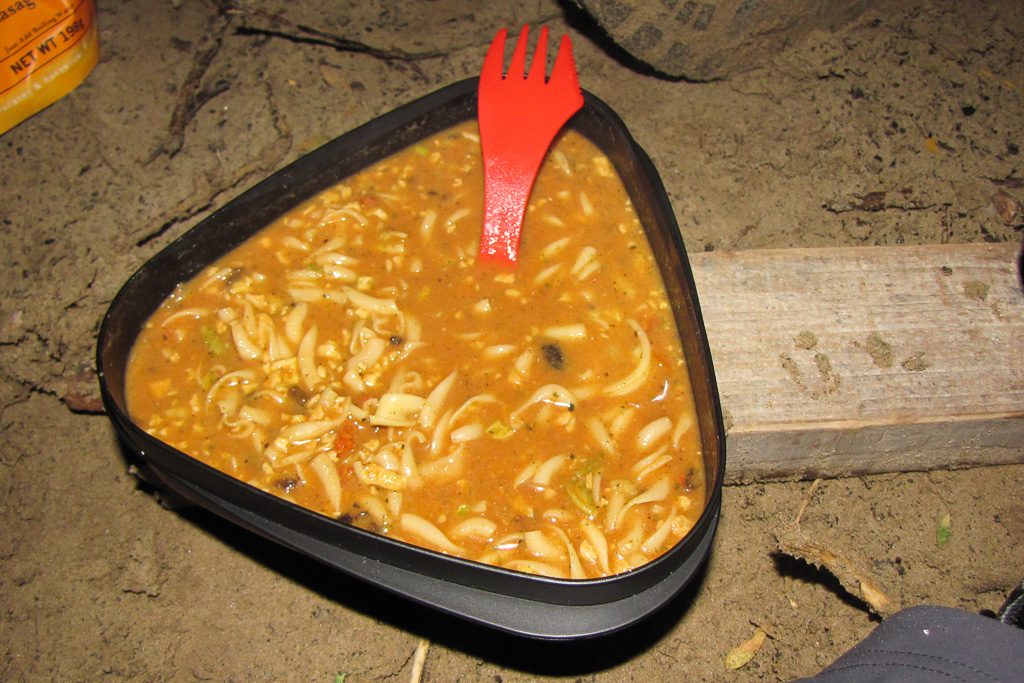 Okay, the full 13 minutes was spent waiting and then the lasagna was served. Well, I’m not sure what it was, but it was unlike any lasagna I’ve ever seen, unless there’s a rare ‘lasagna soup’ edition. What’s the conclusion? Well my friends, it was absolutely hideous and we had to psych each other up to eat it. If you want a laugh, remember this was the first night and I’d bought up big at the ‘Backpacker’s Pantry’ sale. We had tons of the crap to eat!

Anyway, that’s the first day over with. I’m not sure how far we walked, as it was pre-smart phone days. I was relying on an abacus and a home-made sundial during this walk, but I think the first day was about 10 km. I could be wrong though, which has been the problem during this entire post.

So, that’s the first retro post over and done with and I’ll add to this hike when I can. I can’t see myself writing the whole trip up in one hit, as just trying to remember it has given me a headache…