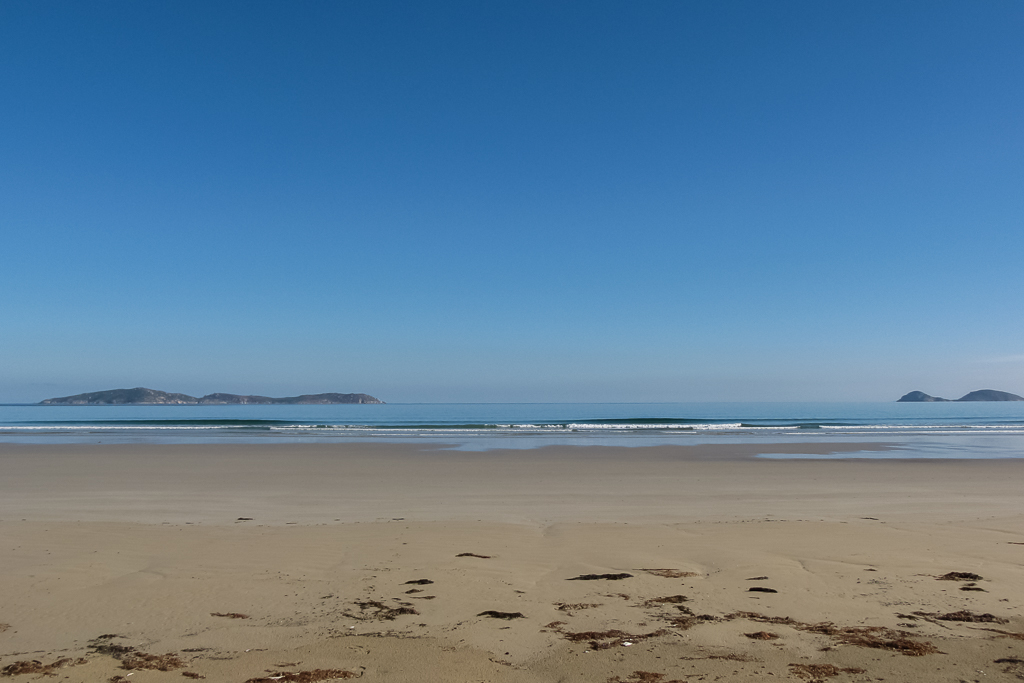 In the process of writing this retro trip report, I found a little problem once I dragged out my old, tattered Wilsons Promontory map. Not much happened and on top of it, the walk was pretty low on interest.

I’m sorry to say, but the entire day from Oberon Bay to Roaring Meg was a road bash. Definitely the least interesting part of the southern circuit hike. How do I spice it up to keep you awake? Well, not even I can come up with anything bizarre to maintain some interest and if you think you’re getting bored then have some sympathy for me, as I’ve got to write it. Instead, my plan will be to throw in the odd photo, which have absolutely nothing to do with Wilsons Promontory in order to pass the time. 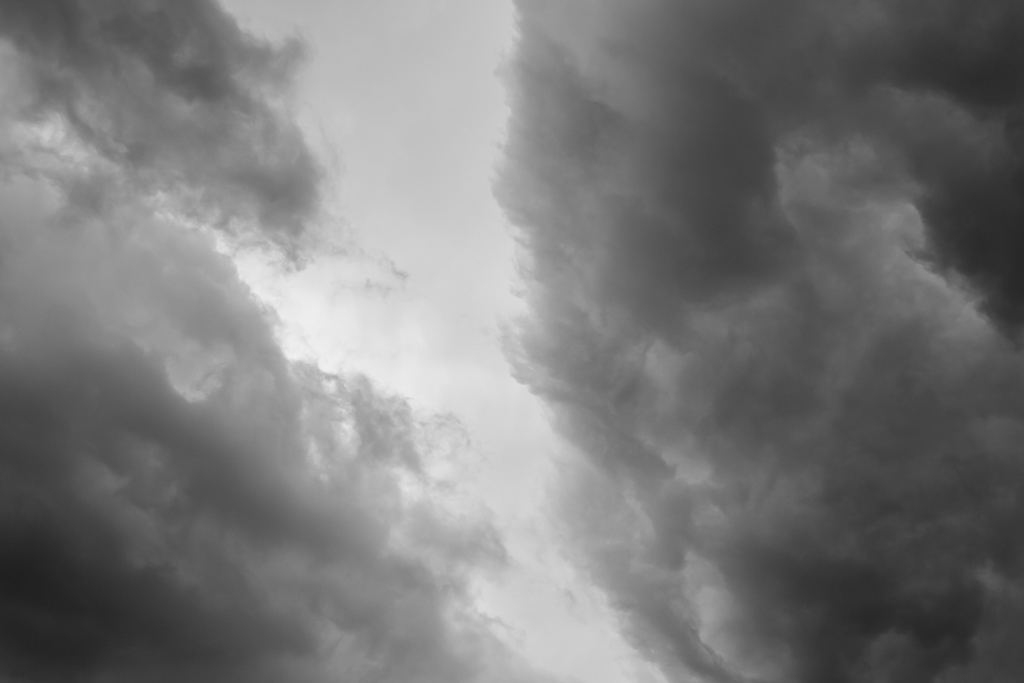 The first night spent at Oberon Bay went without a hitch. Well, for me anyway as Ben informed me I snored a ‘little’. Apparently I sound like a Yeti with a chainsaw, which probably explains why I feel permanently tired. Anyway, the weather was clear and sunny which is one thing I remember clearly about this trip. Victoria in June can be a bit hit and miss on the weather front, but we essentially had the same sunny conditions every day. How easy is this winter hiking business? 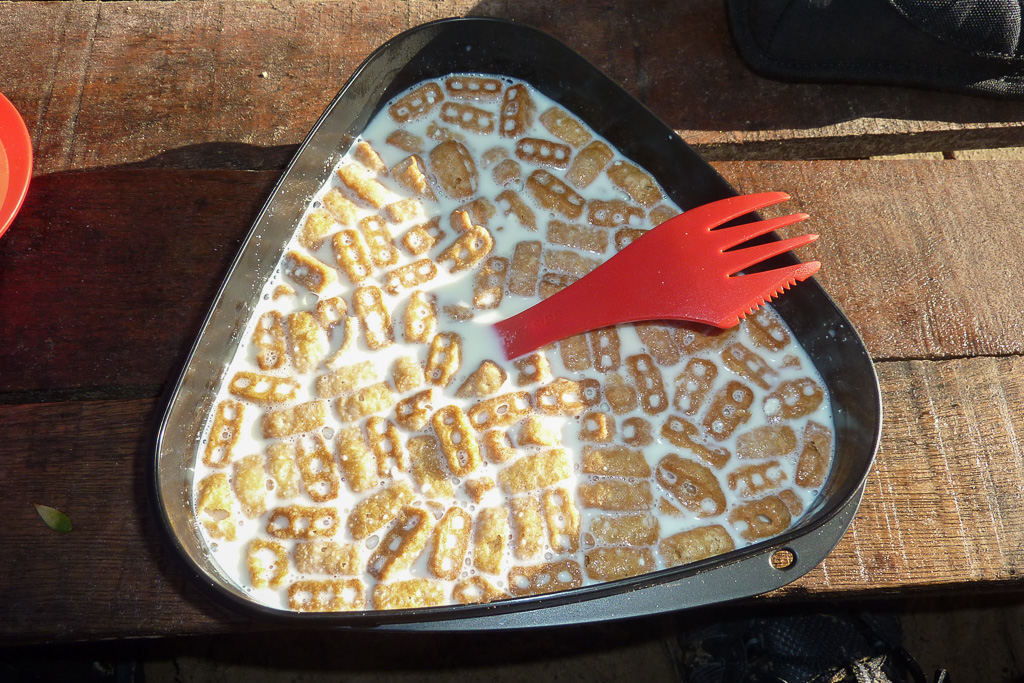 There were various bits of driftwood, which people had dragged in for makeshift tables and although it’s frowned upon, it did make for some comfortable eating. I also got do to some reading whilst I was eating my Nutri-Grain. 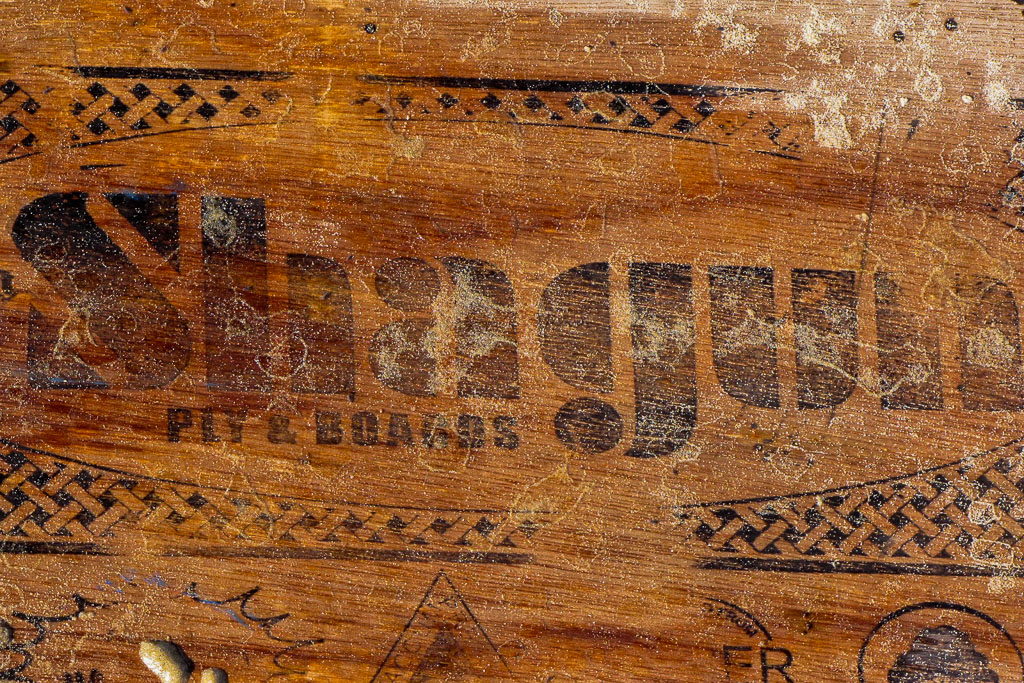 There was an insanely fearless bird who spent his time trying to knock off any food item we might have left out. He spent his time sitting on one of the wooden crates about 3 inches from where I was eating. I guess it goes to show how used the wildlife are to people in the area. I just consulted my bird book and I’ve no idea what type it is. Some sort of Plover? 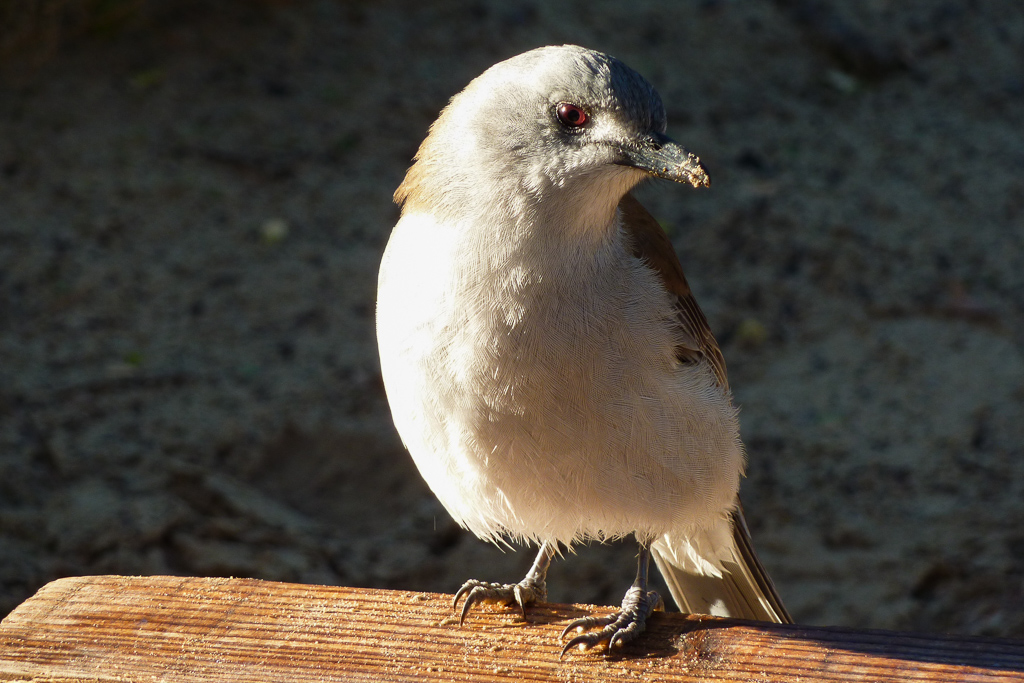 The first move of the day before heading off, was to go back to the Oberon Bay beach. The previous evening, we’d missed a proper look at it, as it was dark when we got to camp. In daylight, it was pretty impressive, as the tide was low and the water was like glass. 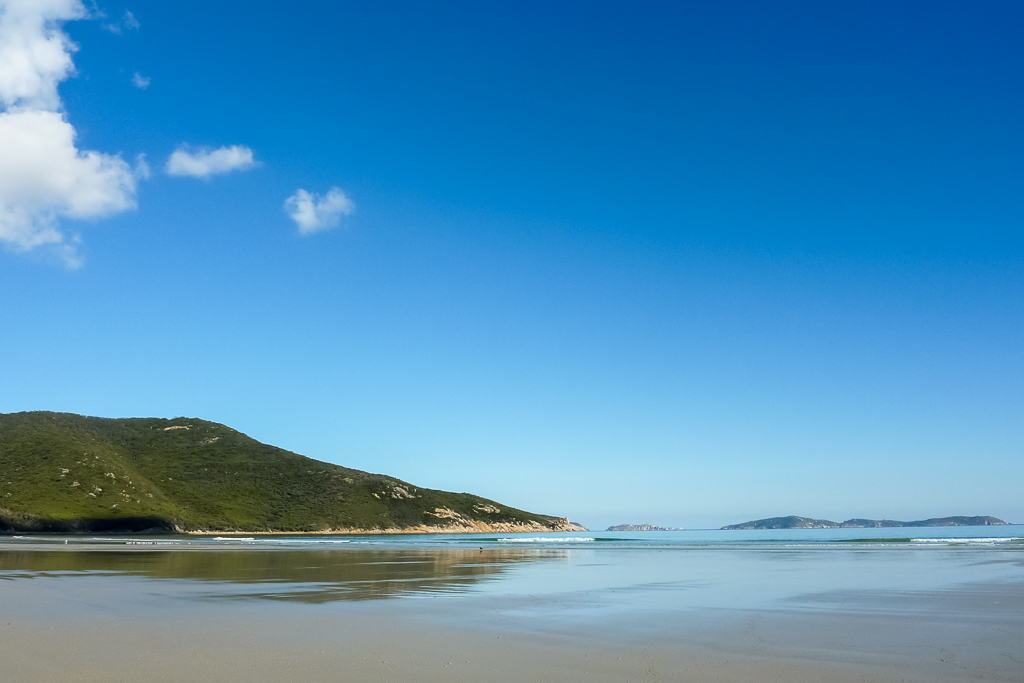 A Sooty Oystercatcher wandered around and with my limited camera range this was about the closest I could get. 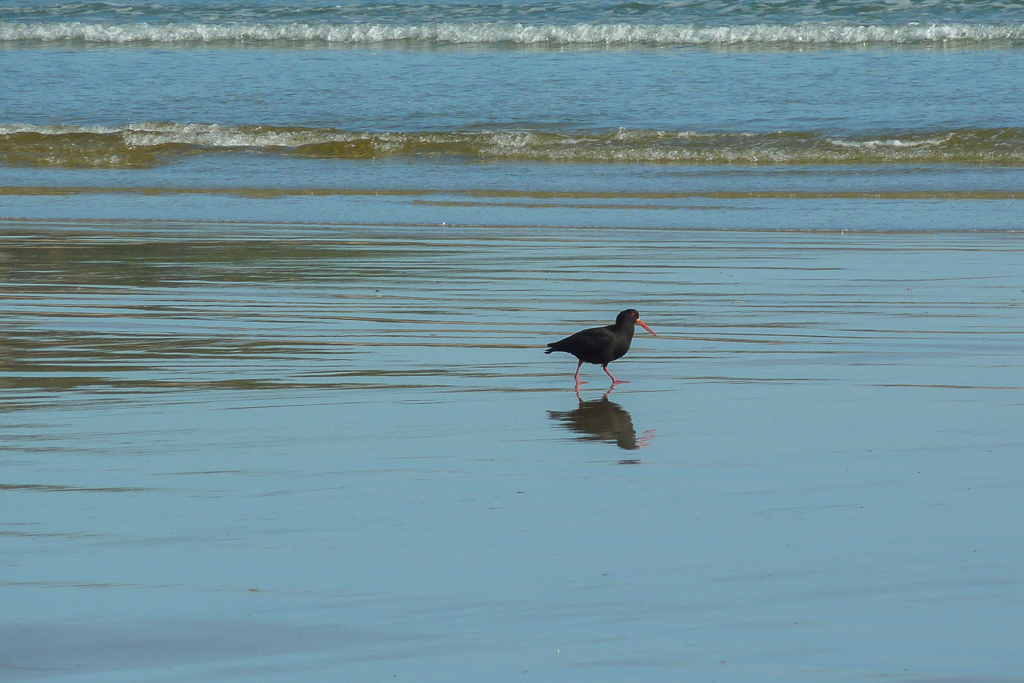 I might have missed a close up, but at least I got a super zoomed shot of his footprints. Not as spectacular, but it’s something. 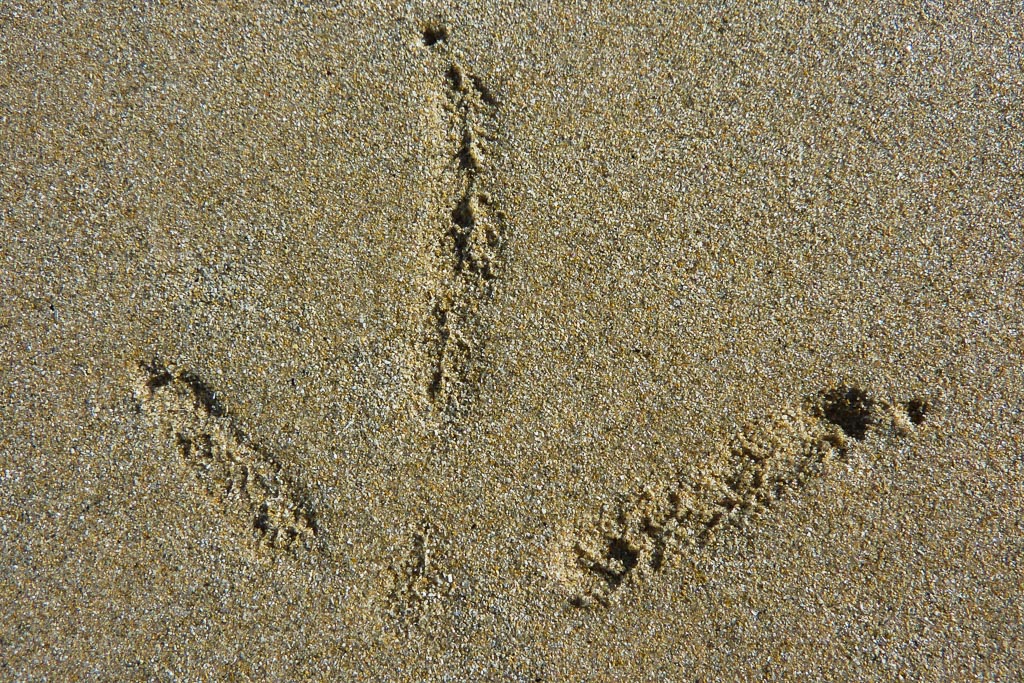 Well, the beach fun was over, so it was time to head off and it’s time to wheel out some of my ‘super scanning map action’. Let’s have a look. 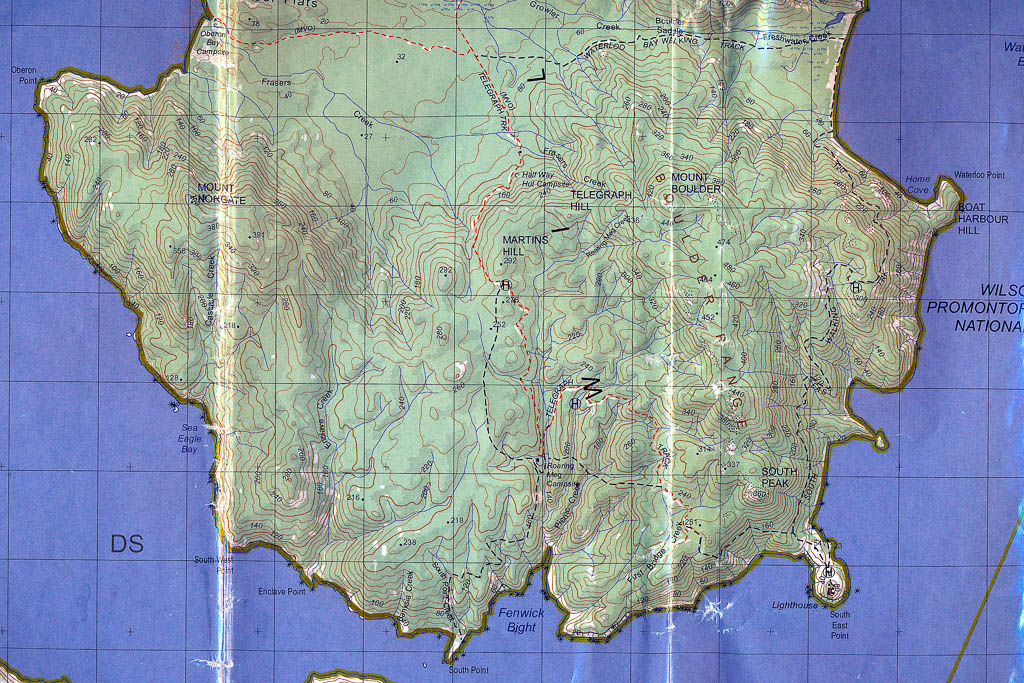 I bet you’re digging the folds aren’t you? This was scanned with my hand pushing it flat, yet it didn’t seem to make much difference at all. Next time I might place my stomach on it to completely squash it smooth.

Okay, the plan was to head inland on the track from Oberon Bay and then hang a right (south) on the Telegraph Track, which would lead to our next camp for the night at Roaring Meg. Great plan huh?

All I can say is I’m glad I took MK’s advice about the first days proceedings and didn’t use the inland route, which was my original intention. The inland route kind of sucks and it’s instantly forgettable. Yeah, yeah I was outdoors and all that, but it seemed to be just a travel day in order to reach other places to see better things. 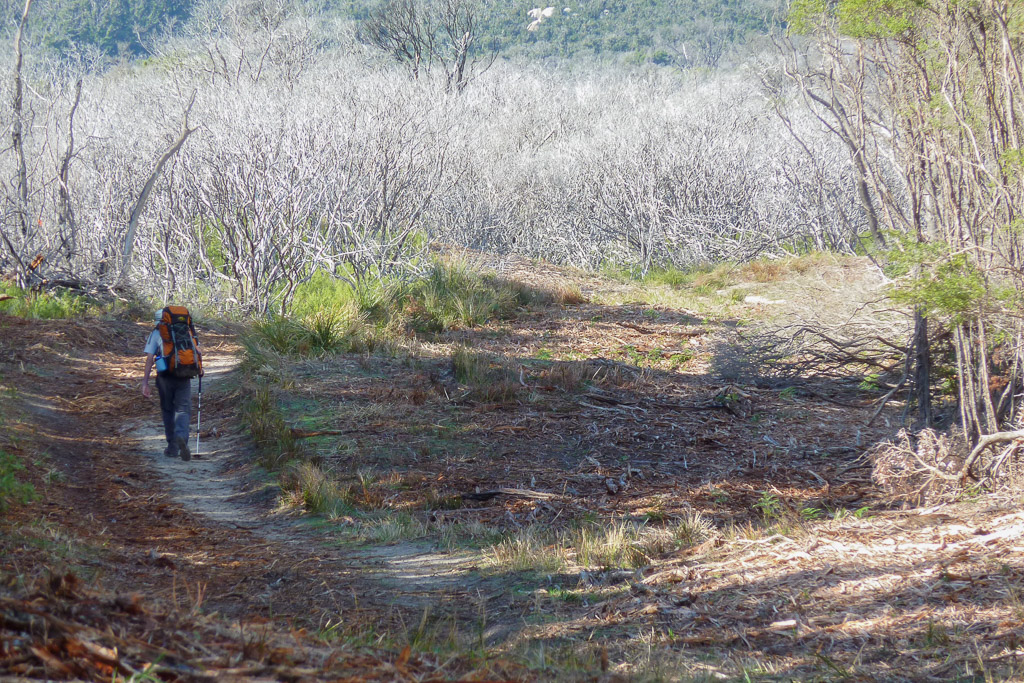 We reached Telegraph Track and began our walk south. It’s not really a track, but a dirt road which makes for very mellow walking. This road is the direct route to the lighthouse and at 19 km, it’s a solid day hike. We came across Half Way Hut in good time and guess what’s there? It’s fairly obvious, but to break this entry up a little, let’s have a picture from my upcoming backpack review extravaganza. 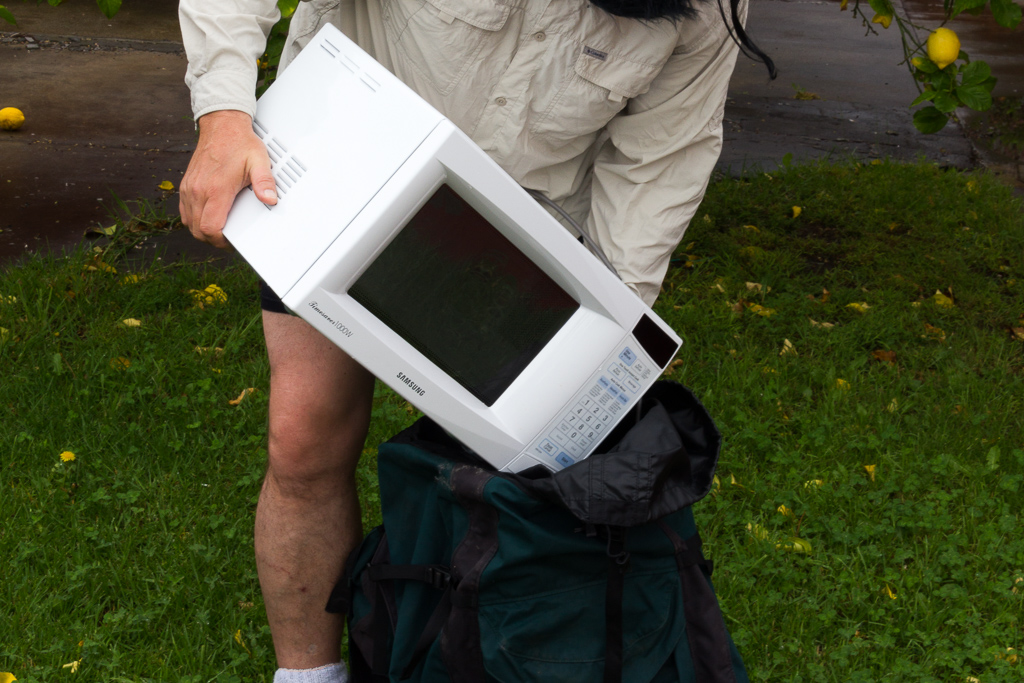 You can’t wait for this entry can you?

Anyway, of course there’s a hut at Half Way Hut and here it is. We stopped for lunch as it felt like we had reached half way in our walk to Roaring Meg. 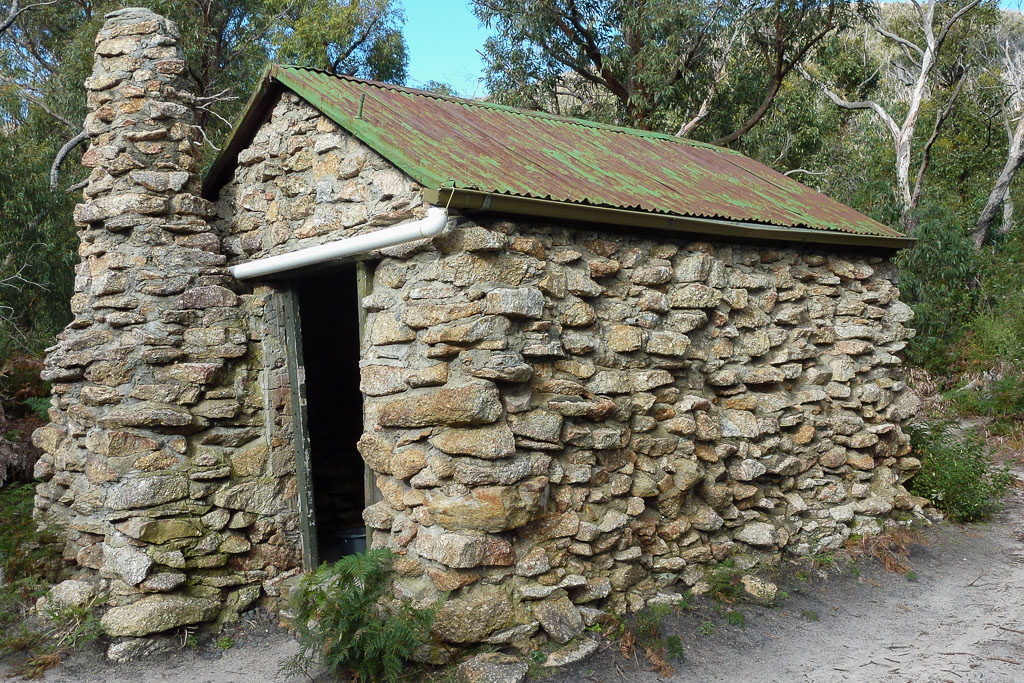 It’s a great little hut, but it’s a pity the inside is filthy with rubbish and all manner of crap graffiti. So, we sat outside and munched on lunch in the sun.

After lunch the way ahead was standard roadside fare. The track follows close to Martins Hill, which at 292 metres is not exactly Everest, but it’s enough to work up a sweat under a heavy pack on a sunny day. I do remember there were signs of an old telegraph line along the way. I assume this explains why we were on something called Telegraph Track. Just a wild guess though. 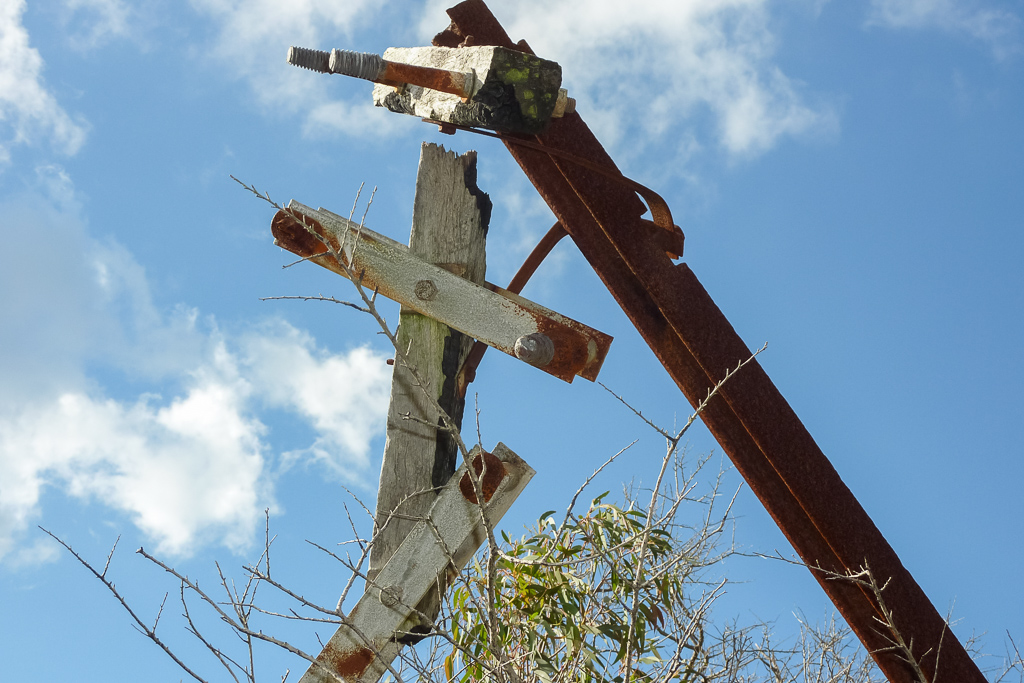 One other thing I remember when perusing the photos, is the view of the sea to the east was completely flamed out by the sun. A standard point and shoot digital was having an exposure meltdown, so I gave up trying to get nice photos. Ben was more resourceful though and went for a rudimentary ‘polarizer sunglasses’ shot. 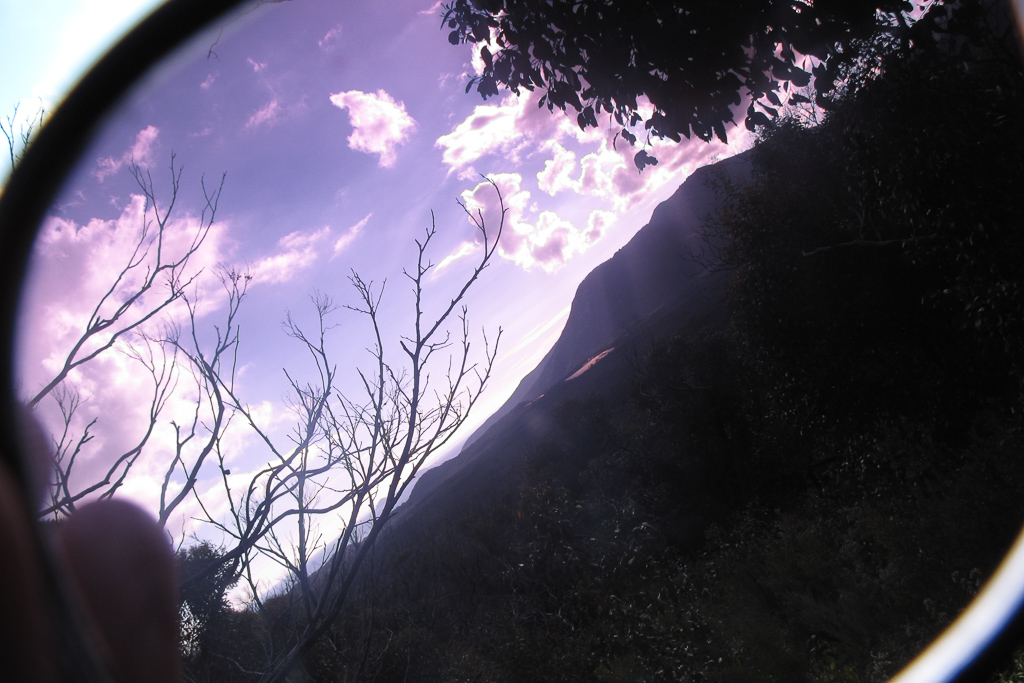 Now, you may laugh at that filter attempt, but it’s a lot more interesting to look at than the crap I was taking. How’s this for glarefiasco.com? Talk about a bit of a joke. 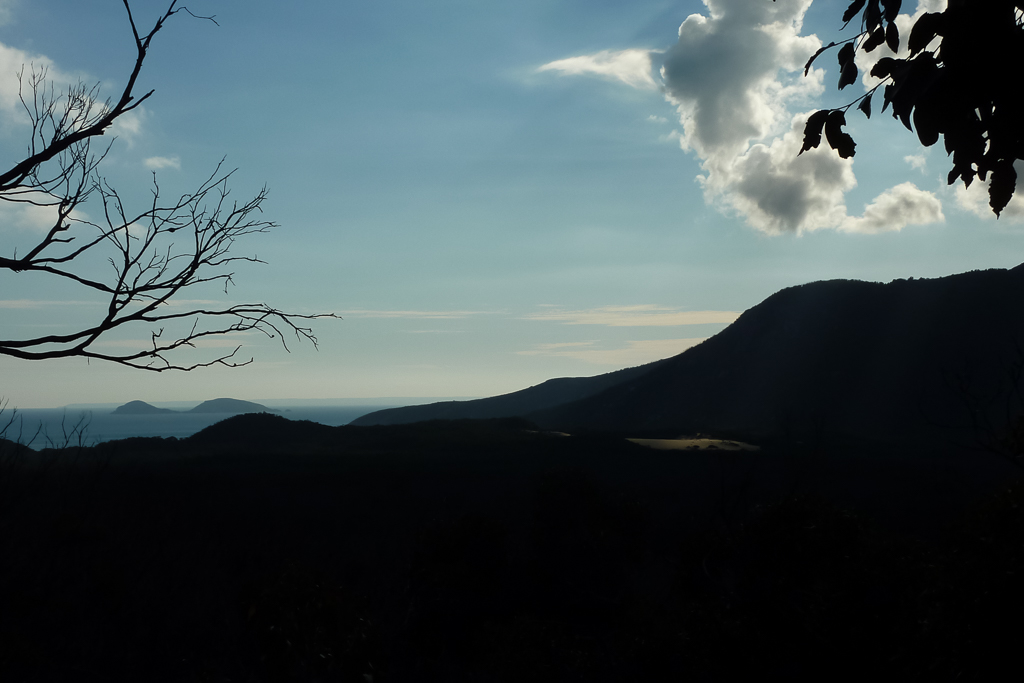 You know what? After trudging uphill to the helicopter landing pad near Martins Hill it was then just a simple cruise down to Roaring Meg. It’s a great name by the way and I was going to research it for this entry, but I’m too busy sitting on the couch drinking cups of tea.

We reached the site and found two spots to camp. ‘Up top’ and ‘down below’ were the two sites and the ‘down below’ was next to Picnic Creek, so it made sense to put up the tent near the water. There was also the fact a few tents were already up top, so we set off down a short hill and found a spot near the water. With tall trees around us though it was freezing, as it appeared the sun had been blocked out all day. 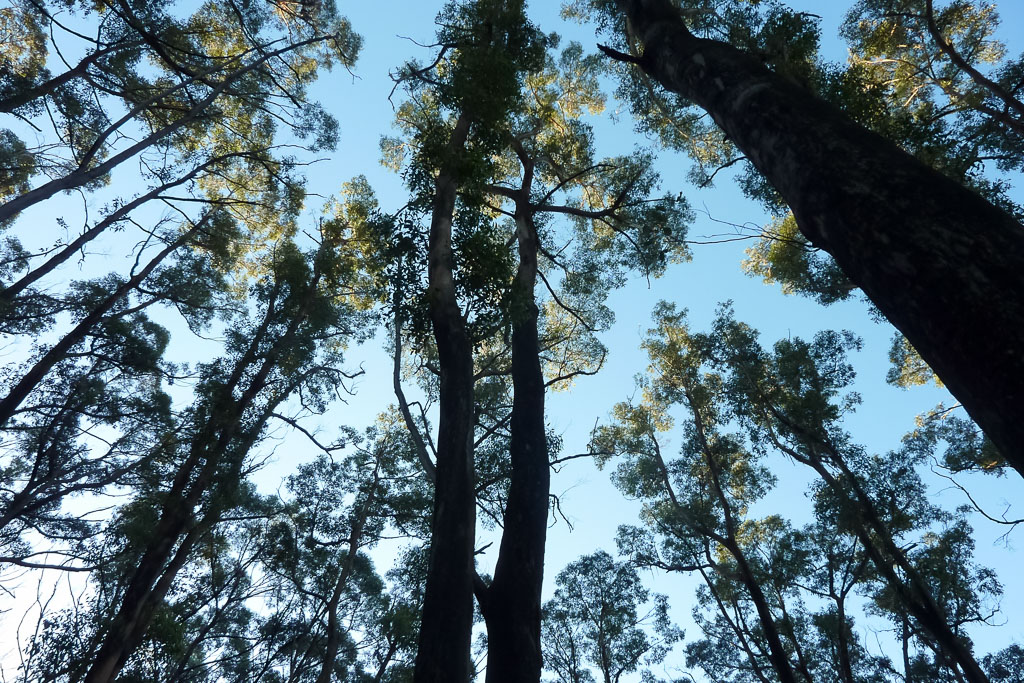 It was peaceful though, so we went through the process of setting up the tent that’s suitable for post apocalyptic survival. Oh yeah, I’ve noticed I don’t have any tasty food photos for the evening spent at Roaring Meg. Let’s look at a photo of last nights storm clouds instead. 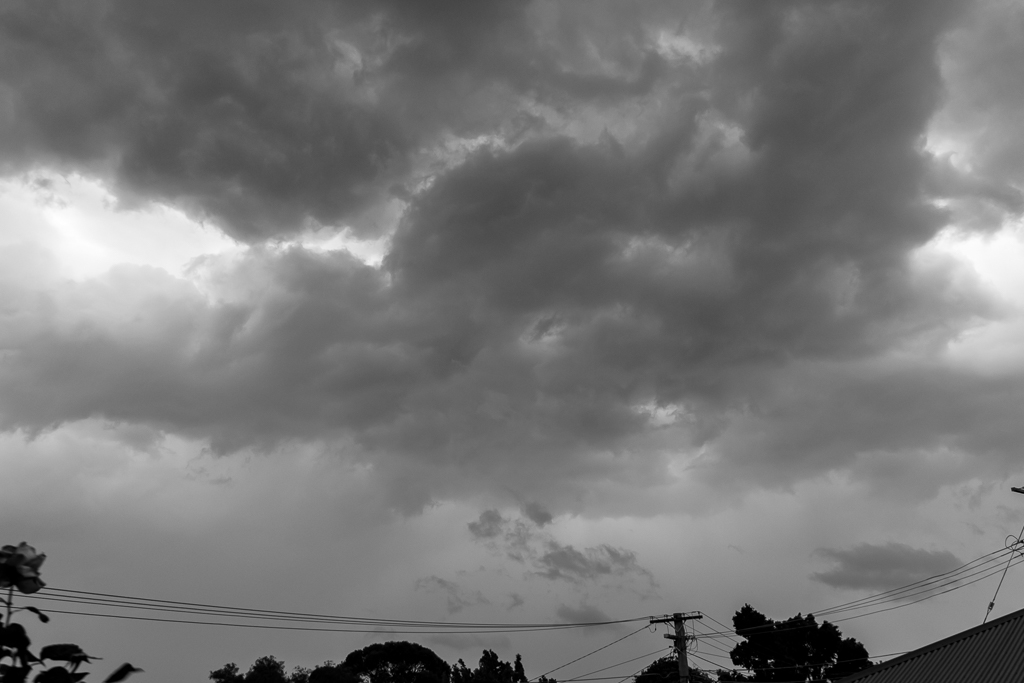 That’s about it. How far did we walk? I’ve no idea, but it was roughly 11 or so kilometres. I had a full GPS download of the walk, but do you think I can find it? Changing computers a few times means I seem to have lost it, which is kind of annoying, but it does give me another excuse for re-walking the entire area just so it can satisfy my inner geek.

What do I finish this entry off with? How about a friendly cat that’s been visiting lately? I’ve got pretty powerful ‘catdar’ and I haven’t had many avoid me over the years. Sometimes they come running when I’m around although, I do wear sardine aftershave, which might explain it. Here’s the feline visitor and the bonus of this retro report is each day after this was superb walking, unlike this road fiasco…