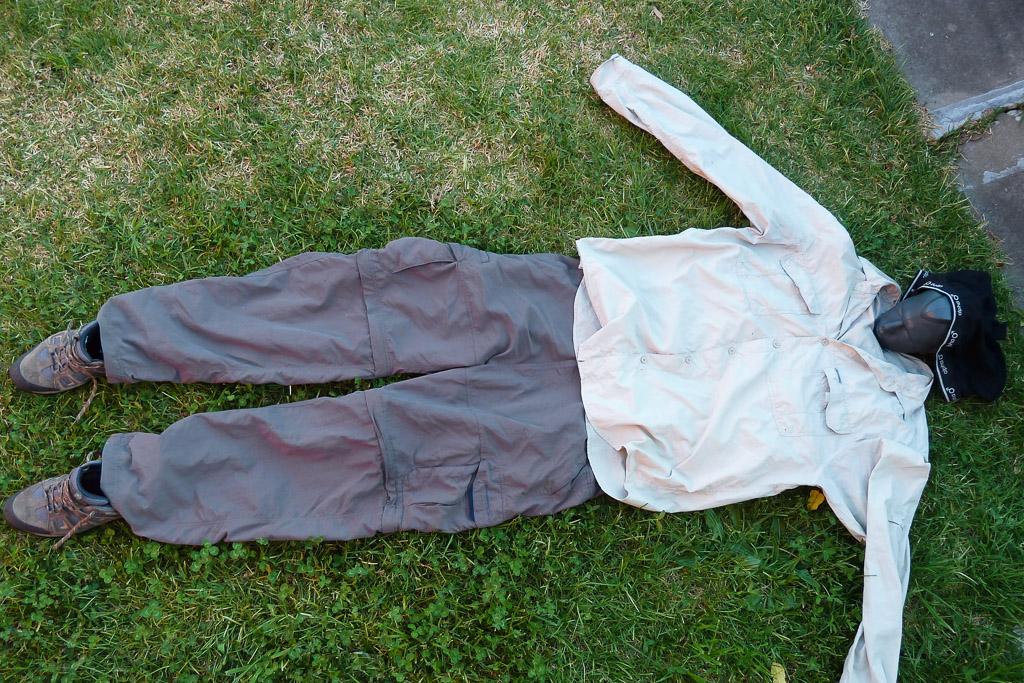 Here we go again and I was going to write up the walk I did yesterday, but I couldn’t be bothered right now as I’m distracted by the cricket, Rugby World Cup and tea drinking from a monster cup. It doesn’t help it’s Sunday night and with work tomorrow, I’m considering putting my head in the oven. To avoid a roasting, I thought I’d tap out a quick entry about some clothes I’ll be wearing over the next few decades.

What? Gear reviews? No, don’t panic, this is just an opportunity to bang on about stuff, whilst I monitor the Canada v France rugby match. As I’ve mentioned before, I’m tackling a 1000 mile challenge, which was dreamt up by another blogger. There’s not much to it, other than walking 1000 miles in a year. Oh, not in one hit either!

I’ve been powering through the miles (hang on, kilometres) since I started and am definitely on target with the help of a secret urban weapon. I’ve utilised urban walking to rack up the mileage. Is this cheating? I’ve no idea, but here’s a taste of the method. 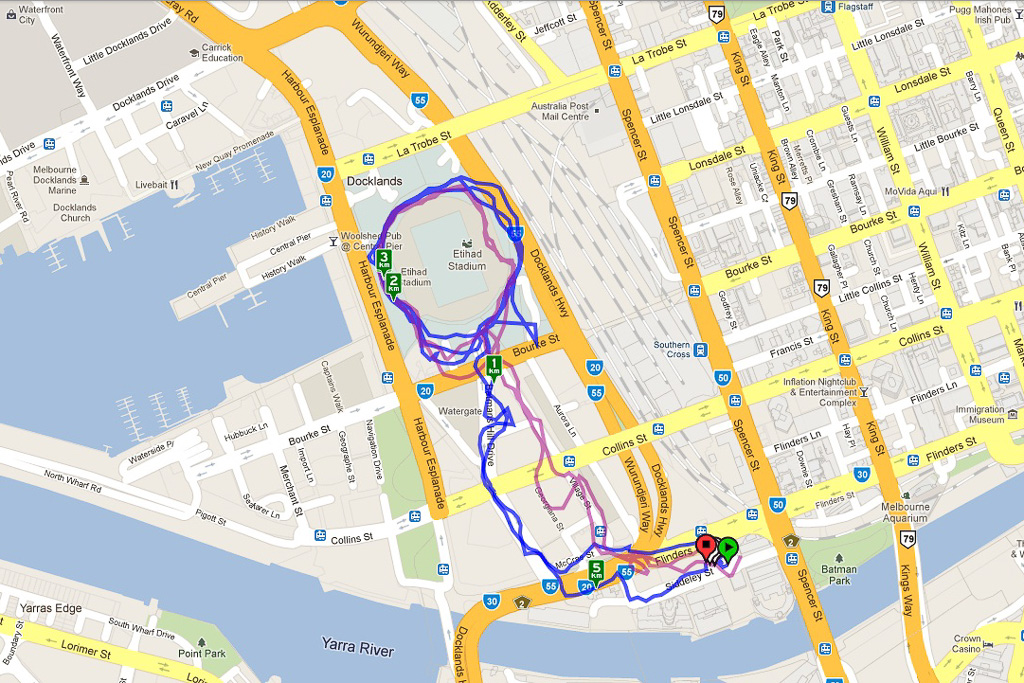 Yep, downtown Melbourne and every lunchtime I head off and walk around Etihad Stadium in the Docklands. As you can see, it’s not one lap, but the multiple method until I return feeling dizzy. It’s got some fantastic sights, such as concrete, construction workers leering at women walking by and the mixture of car and railway noise. It’s not exactly wilderness, but it’s handy for the mileage.

Now, the weather is warming up and I’ll continue tackling weekend day hikes. I’ve got a ‘no pack’ policy for three months enforced by a neurosurgeon, so I’ve got no epics lined up. In fact I’ve been completely ‘epic stir crazy’ lately, so the aim is for long day hikes over the next few months for a bit of a challenge. I’ve worked out the clothes I’ll be wearing over summer and I might as visit the stuff that seems to work for me. Okay, let’s start with the upper body.

I hate the sun on my skin, which is weird seeing how as a kid I’d lie in the sun on the beach and bake. In fact I remember making sure I’d get burnt early on in the summer, as the ‘first burn’ meant the tan came easier later on. Is that stupid?

Well, it didn’t end there, as whilst in the army I was based in Townsville and the same method was utilised. The first time I started to think it was stupid, was when a group of us were sitting out in the sun with our shirts off during lunch break. An Aboriginal bloke in our unit would always sit in the shade and say, “Get out of the sun you idiots”, He never sat in the sun and would just shake his head at the stupid white blokes. This was the first time I thought, “Hang on, he’s got the skin for it and he won’t bake himself. What does he know that we don’t?”

Well, it took a while, but the baking is over and I cover up completely. What’s left uncovered is coated in sunscreen and I found t-shirts didn’t cut it whilst walking. I needed sleeves and a collar and I came across the shirts made by ‘Columbia’. They seem to have the same range, year after year, which isn’t too bad as they work. It’s from their Titanium range. Stylish. I wore this last summer and it works great, with minimal chance for sunburn, plus it dries in about 26 seconds if wet.

One unusual thing that’s happened though, is a weird stain appearing on the back from one of my fifty backpacks. What’s interesting is it’s purple and Ben mentioned once in a matter of fact, “Is there any reason why your sweat is purple?” It’s one of life’s mysteries, but as it’s behind me I don’t really bother about it too much. Unfortunately it means I can’t wear the shirt to weddings any more.

That’s the shirt taken care of, now what about the pants? Well, at the end of last summer I hit the hiking stores in Little Bourke Street. It was sales time, so I aimed for a stock up.

I came across a lightweight pair of pants made by ‘ExOfficio’. What’s with these stupid names? Anyway, I think the most important part is they’re advertised as having ‘indestructible buttons’. What? Oh well, if you’re in the vicinity of a thermonuclear explosion, just make sure you have your ‘ExOfficio’ pants on. You might be a little crispy, but your duds won’t be falling down. 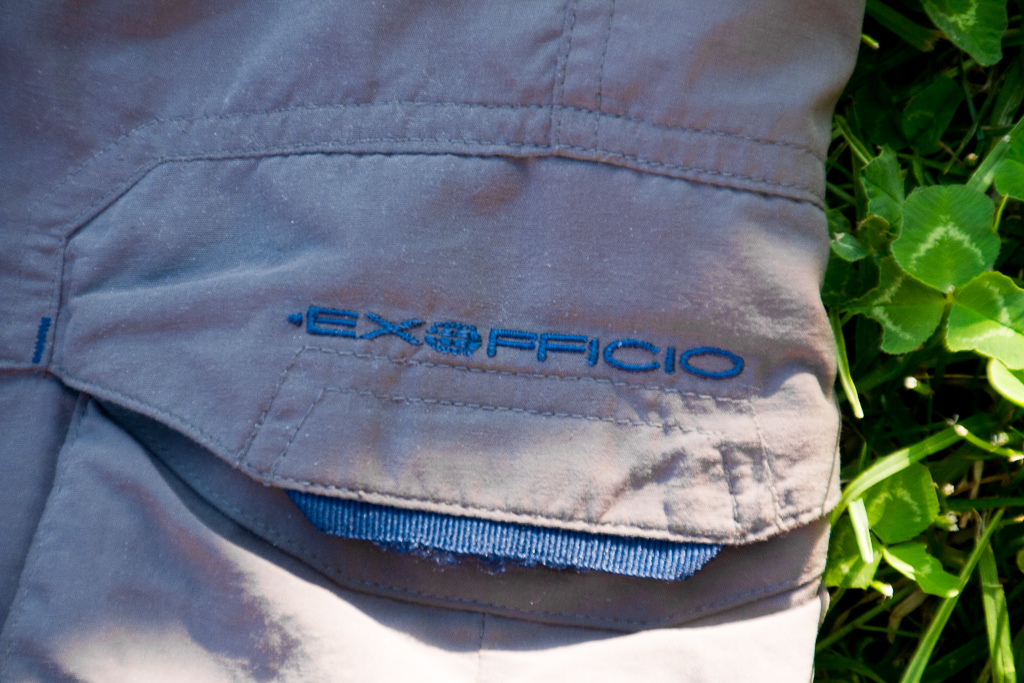 I used to walk with pants according to season. I’ve got heavier winter weight pairs, but over the last year I’ve settled with the lighter summer strides all the time. They dry quickly and I feel cooler, as no matter what the weather I absolutely cook.

These pants also fit another criteria I need. They’re loose. I don’t mind if someone calls me ‘sweet pants’, but I don’t want to be called ‘tight pants’. I like baggy to the point that I get a little ‘home boy’ action with half my arse hanging out. Oh well, I did say I was bringing sexy back to hiking, and if you’re out bush and you spot someone with his pants almost around his ankles say ‘hello’, as it’ll probably be me. Oh yeah, these pants have lots of little pockets and an in-built belt which actually works. Amazing!

Oh, I think my fashion photography needs a bit of work. I went for a cutting edge shot, where you could see the entire pant in one hit. Nothing worked, other than hanging them on the washing line. There’s something unappealing about the look though? Maybe it’s the Stalinist brick garage wall as a back drop, or maybe it’s the Hills Hoist, which makes the overall scene look, um… crap? 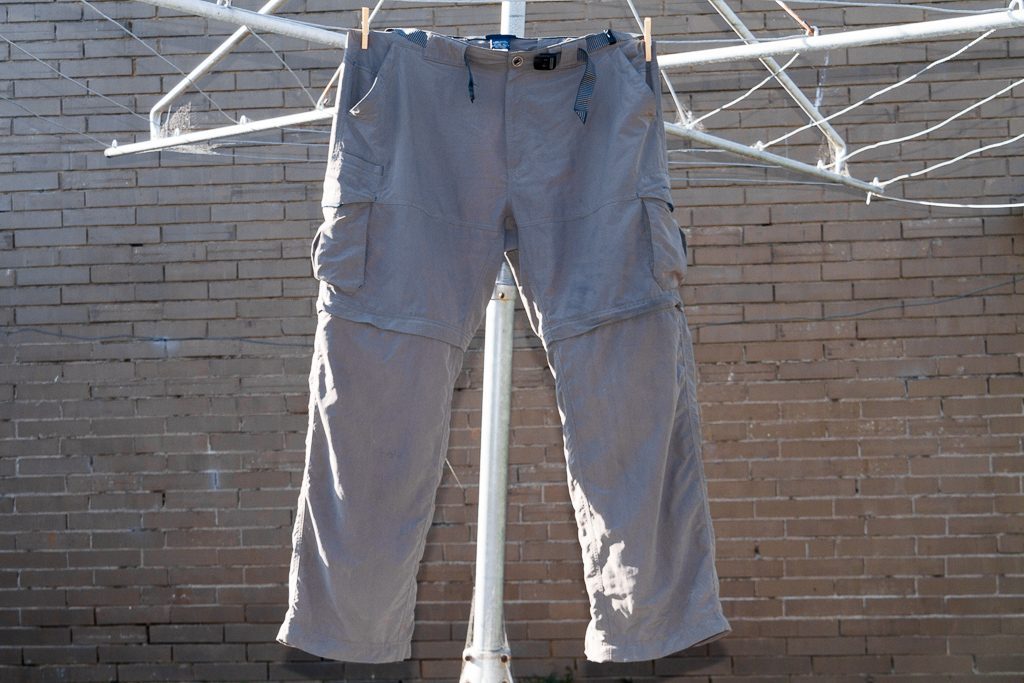 If I’m applying for any jobs in Milan, I might have to take that photo down.

Back to my trousers and an important consideration. What does one do in their baggy pants to stop the equipment from doing 360’s whilst walking? Easy, as I’ve come up with the solution. Bond’s Alpha boxers. I’ve tried lightweight nylon style outdoor jocks, but nothing beats cotton for ultimate schlong security. They’re soft and comfortable, which means there’s no pecker pressure whilst walking (how many dick phrases can I fit into the one entry?) Here’s a photo with some sweet cotton on my head and just to make you feel more comfortable, I even washed them. 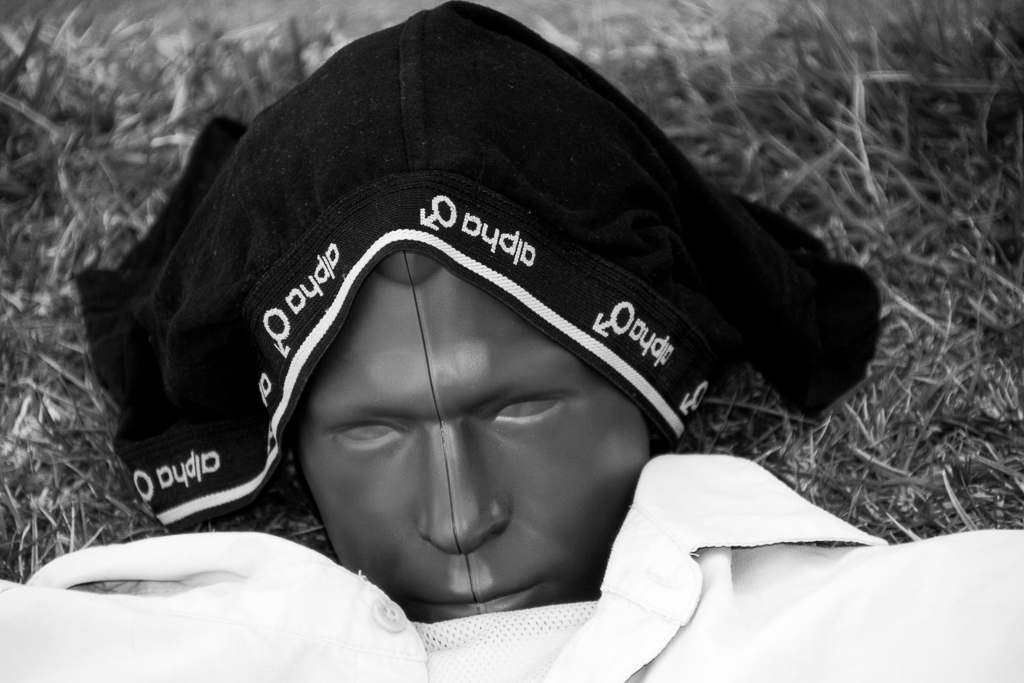 Now, in my last entry I was raving about my La Sportiva boots that I’ve worn everywhere. Some of the walks don’t really need hardcore footwear though, so I’ve done some thinking about this. For the time being, I’m opting for some shoes I found in the cupboard. I bought them three years ago and have barely worn them. 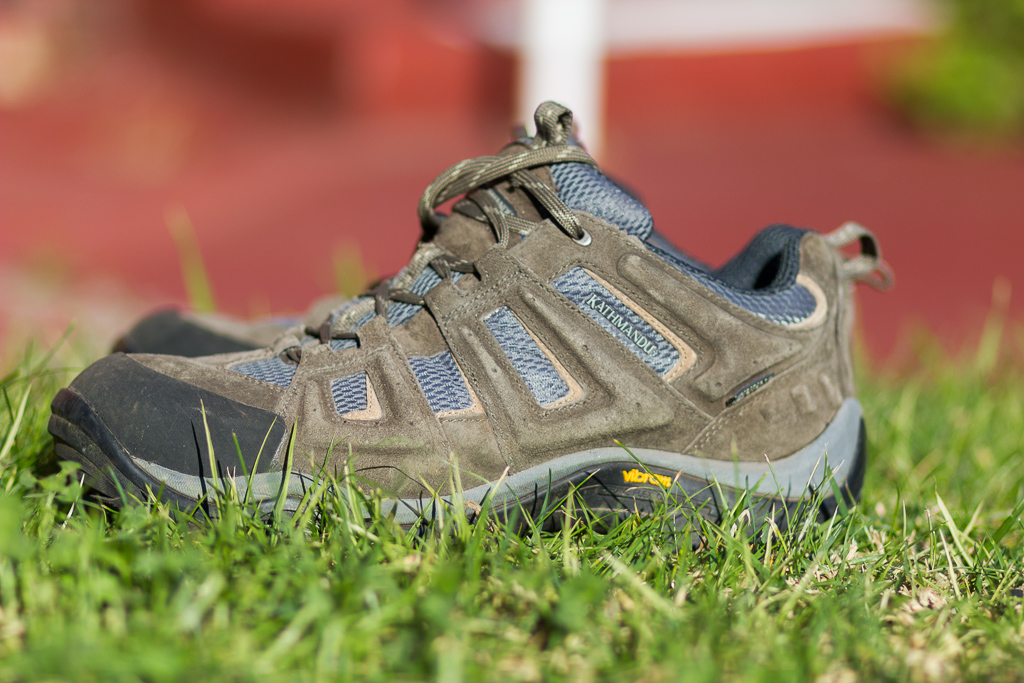 These are a pair of Kathmandu Tonalli shoes, which are quite interesting and after searching their online store they don’t seem to sell them any more. They’re about 50 kg lighter than my leather boots and they come equipped with a Vibram sole and a waterproof eVent inner. By the way, the big ‘V’ is not a typo, it’s just the daft way all outdoor gear seems to be written with a random capital letter thrown in.

Kathmandu clothing and equipment seems to cop a caning by a lot of outdoor people as ‘Crapmandu’, but I can’t complain as the products I’ve had from them have lasted years. I was wondering why I hadn’t worn these before, so I took them out last week on my ‘Etihad Stadium’ hike. I remembered why I didn’t really get into them, as I previously wore them with thick hiking socks and something didn’t feel right. This time I got a little wild and wore them with a bog standard pair of ‘Converse’ socks such as these. 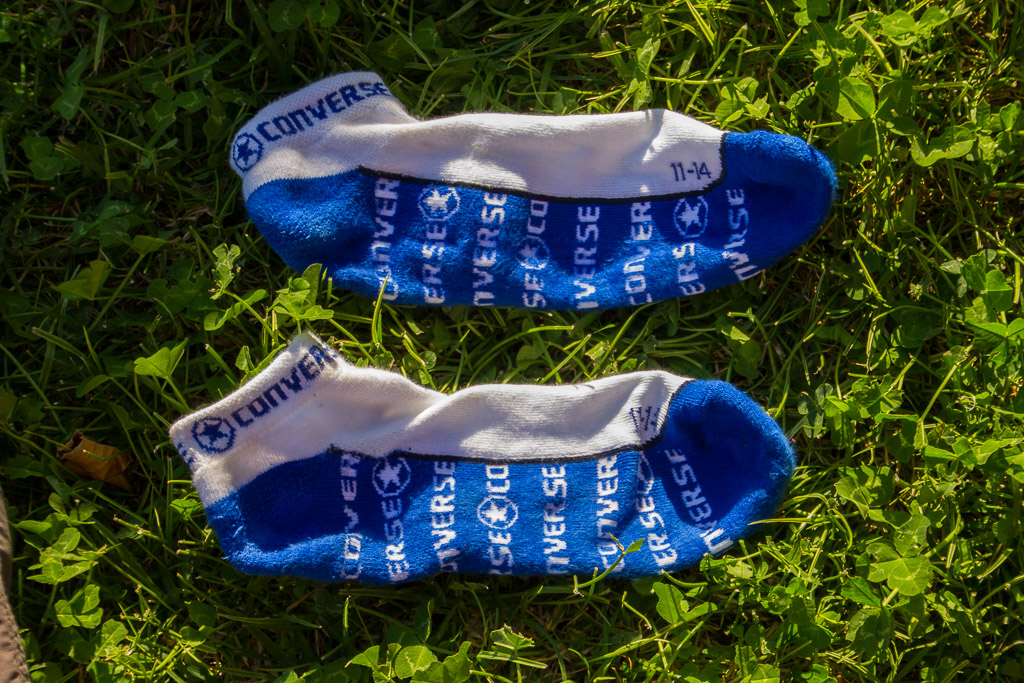 Guess what? They felt great with the thinner sock, so I went for the ultimate test and that was a 19 km walk yesterday. Well, that’s the walk I’ll write up later in the week and I can say I felt better lugging a lighter shoe up the many hills I walked yesterday.

I’ll say something right out there and that’s I felt fine at the end of the hike. The Vibram sole worked great on loose surfaces, my feet weren’t hot and the inner just felt comfortable. What? Is this possible? All I can say is the La Sportiva’s are getting parked for the time being and my lightweight shoes are the go right now.

Hang on though, as I’ve got a further weapon up my sleeve. I used to do a lot of running and I can’t even think of the amount of shoes I would go through searching for my perfect pair. In the end, the best  I ever used were the Asics Kayano. They were magnificent for me, but when I stopped I thought I’d buy a cheaper pair for plain old walking. I these (on sale of course). 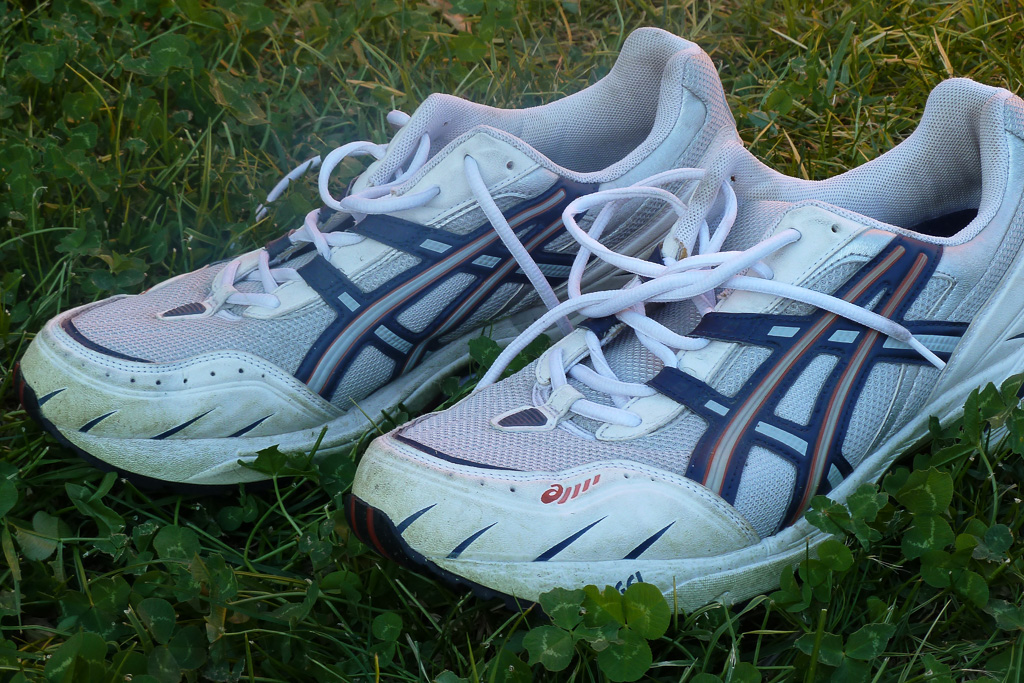 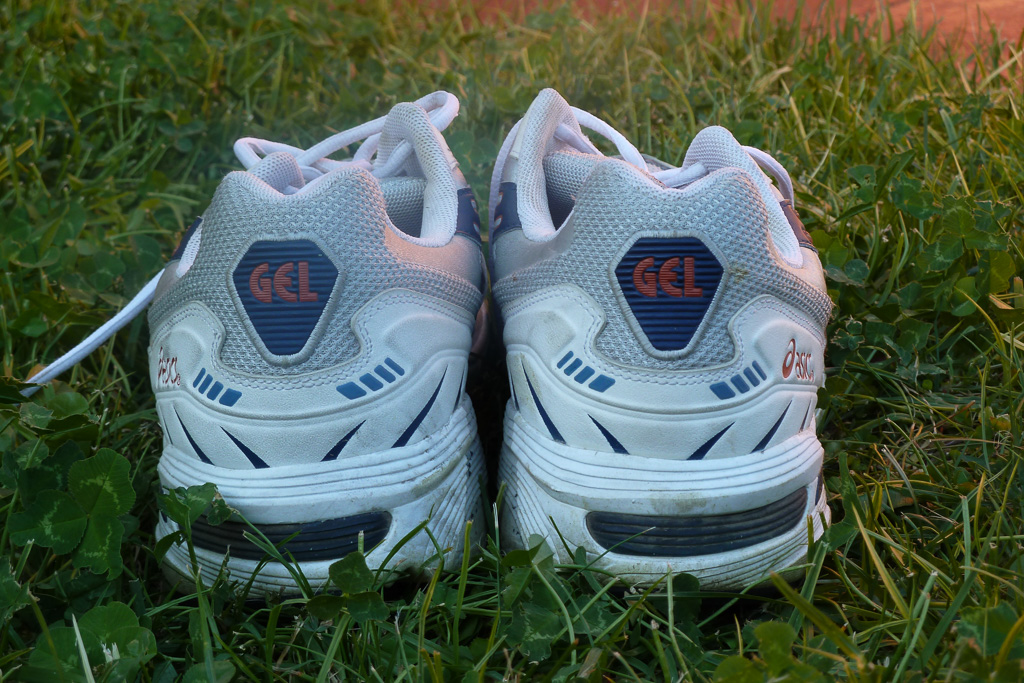 Could these be my next hiking shoe? I might try these out in the summer hiking phase, as long as I don’t wear denim with them. I don’t want to look like those blokes in their 40’s with white runners and light denim jeans on. Just add an outdoor style vest made out of ‘Polartec’ and the look would be complete.

Well, that’s it for my run down of summer gear. The rugby has finished, but the cricket’s still on, so the distractions didn’t end. This walking without a pack has been interesting so far and as you can see by the first photo in this entry, I’ve lost a fair bit of weight.