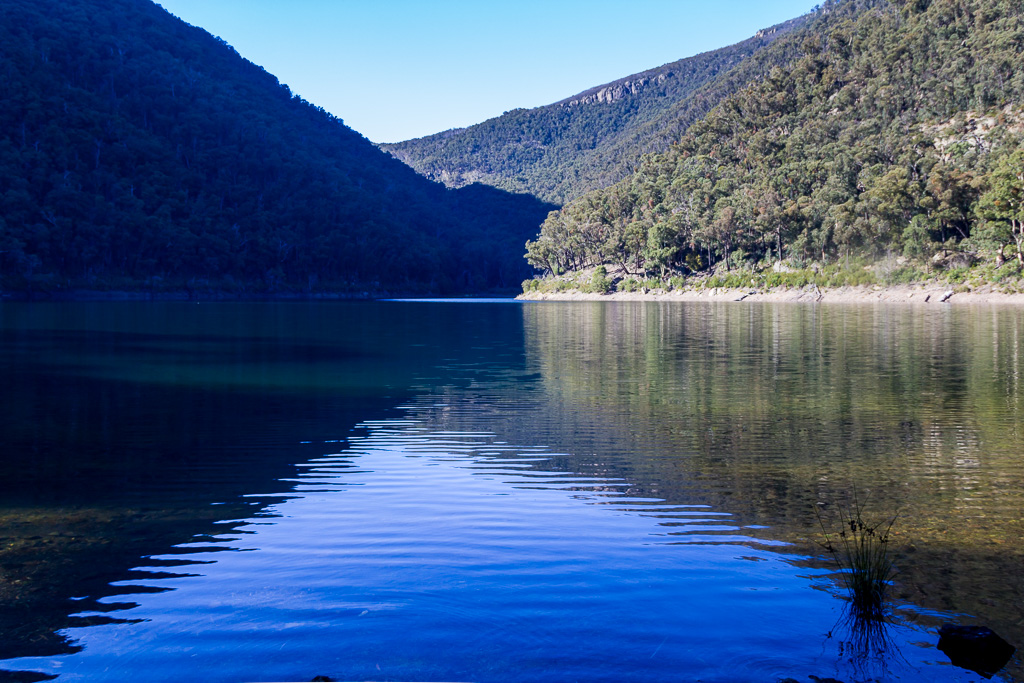 It was a peaceful sleep at Nyimba Camp and as an added bonus I didn’t get attacked by any hungry wombats during the night. It certainly was quite frosty in the morning, but with clear blue skies again it meant a day of easy walking weather wise. I only had 4 km to walk from Nyimba Camp to Lake Tarli Karng, but in order to do so, there was a steep 650 metre descent down to the lake.

The only path open for me to access the lake was Gillios Track. I planned to leave my tent set up where it was, with my sleeping bag and other things I didn’t need for the day inside. I could then just take my pack with odds and ends, which would make the long slog to re-climb Gillios Track later in the day a lot easier. It also gave me a chance to dry the tent, as it was wet in the morning after the cold night.

The hordes of children were up early as well and they headed off to climb nearby Spion Kopje mountain, which looms over the Nyimba Camp area. This meant the toilet was actually free for a change.

Setting off, I noticed the cold night had frozen a few pools of water around and this always makes for some interesting patterns in the ice. 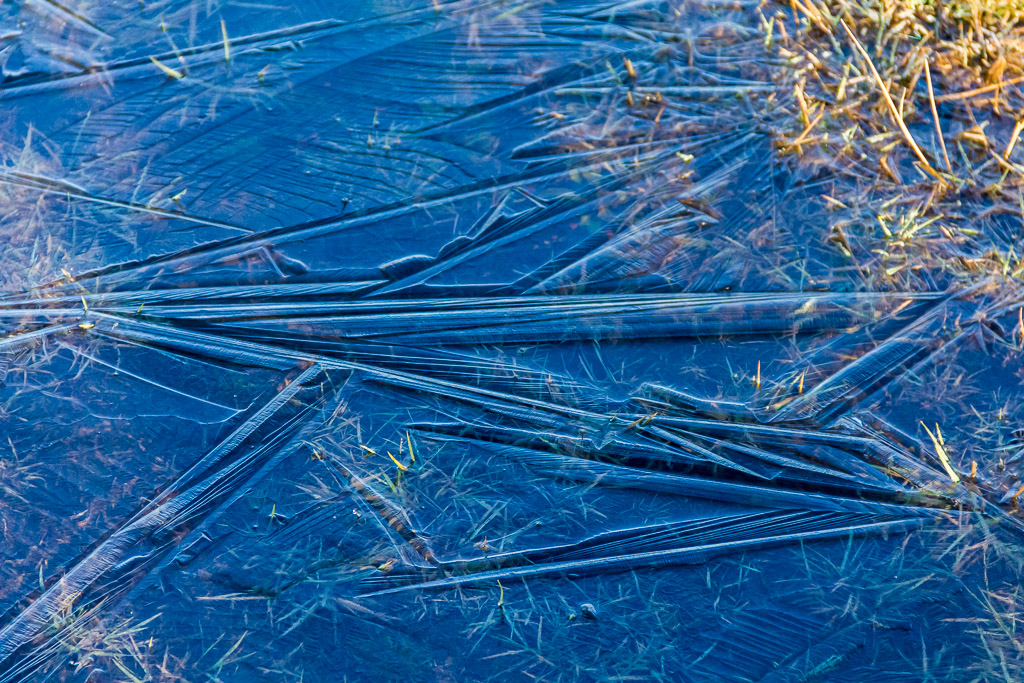 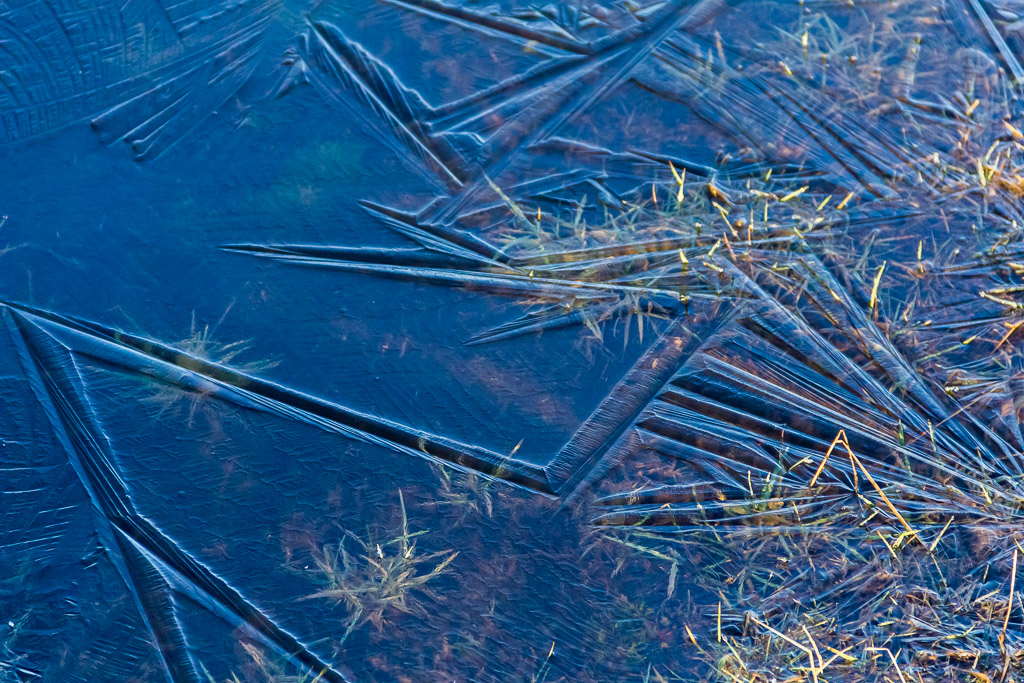 I was then off and racing to Gillios Track, which was a short distance away. Whilst doing so, I passed another camping area signposted as ‘Riggalls Old Hut’ site. It’s a nice sheltered spot with plenty of water from a stream running nearby. Actually, if I’d known the area was that good the previous evening, I may have set up there to beat the midweek crowds. Oh well, maybe next time.

The start of Gillios Track is next to another alternative path to Lake Tarli Karng called ‘Riggall Spur Track’. This was the preferred route according to my notes, but it was closed due to all manner of things going on. It looked heavily overgrown with trees down everywhere, so I have a feeling it’s not going to be maintained any more. 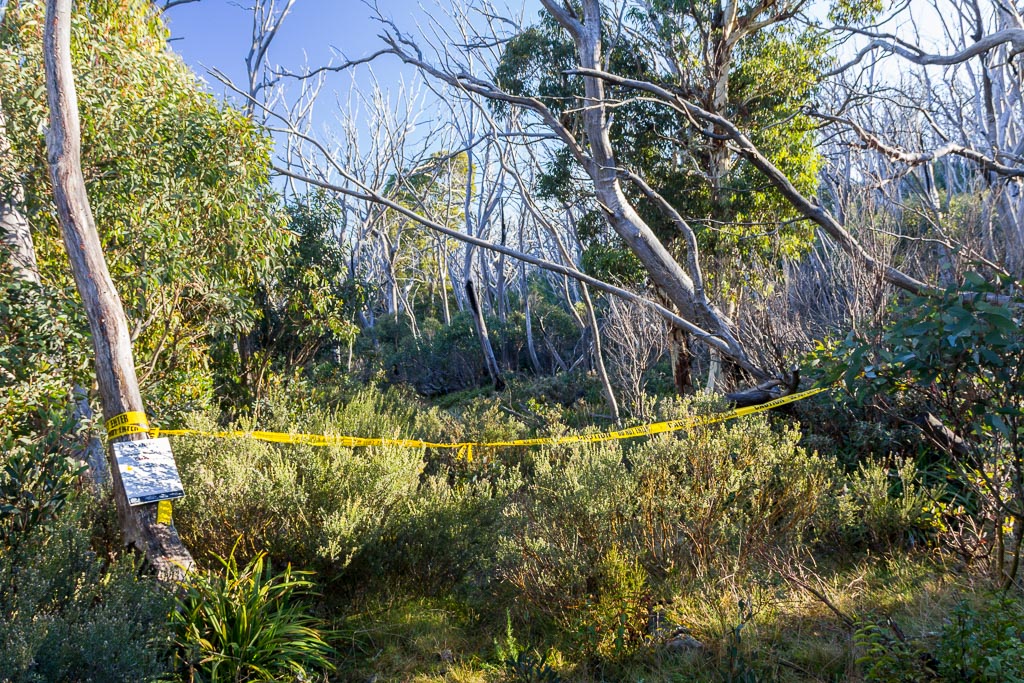 No, it’s not a crime scene. It’s the closed Riggall Spur Track

Not to worry though, as I began the walk on Gillios Track, which initially descended through a forest. ‘Initially’ is the word to take note of, as that didn’t last long. The only way I can think of the rest of the track to the lake is it’s like a ride at a theme park. You know, you’re sitting in some little car or something, cruising along, turn a corner and suddenly it plummets down hill, which on cue causes you to stick your arms in the air and begin to scream. Well, that’s Gillios Track. It plummets into a series of switch-backs, so the majority of the 650 metre descent is completed in less than two kilometres.

Lake Tarli Karng doesn’t get called the ‘hidden lake’ for no reason. During the majority of the descent the lake is unable to be seen, which explains why it was only found in the 1800’s. Well, of course the Aborigines knew it was there, but I’m talking about us boneheaded white folk. Eventually the odd glimpse of the lake was seen. I tried to capture how it looked through the trees with the water reflecting the surrounding hills and blue sky. 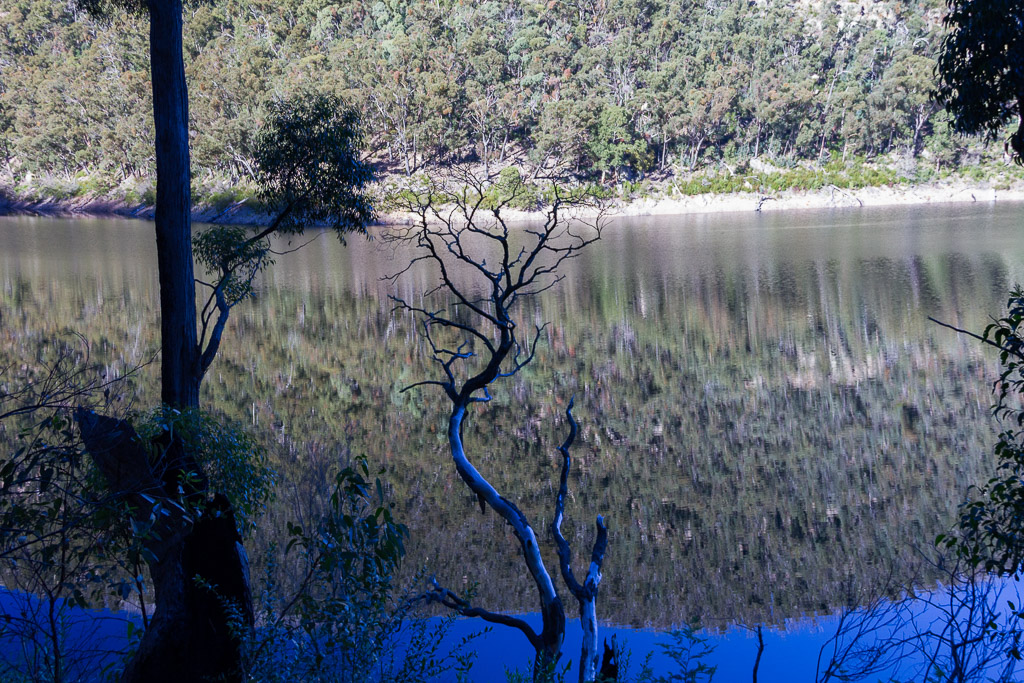 Eventually I reached the bottom and it was a peaceful place to be. If one walks right around the lake a series of waterfalls can be visited within Nigothoruk Creek. This is what I was intending to do, but I had one of those outdoor moments where I thought to myself, “What’s the point of rushing around trying to see everything?” I decided to do nothing and instead, lie in the sun on a rock next to the lakes edge. It was very relaxing and I guess I spent anything up to an hour just winding back the brain on that sunny rock. 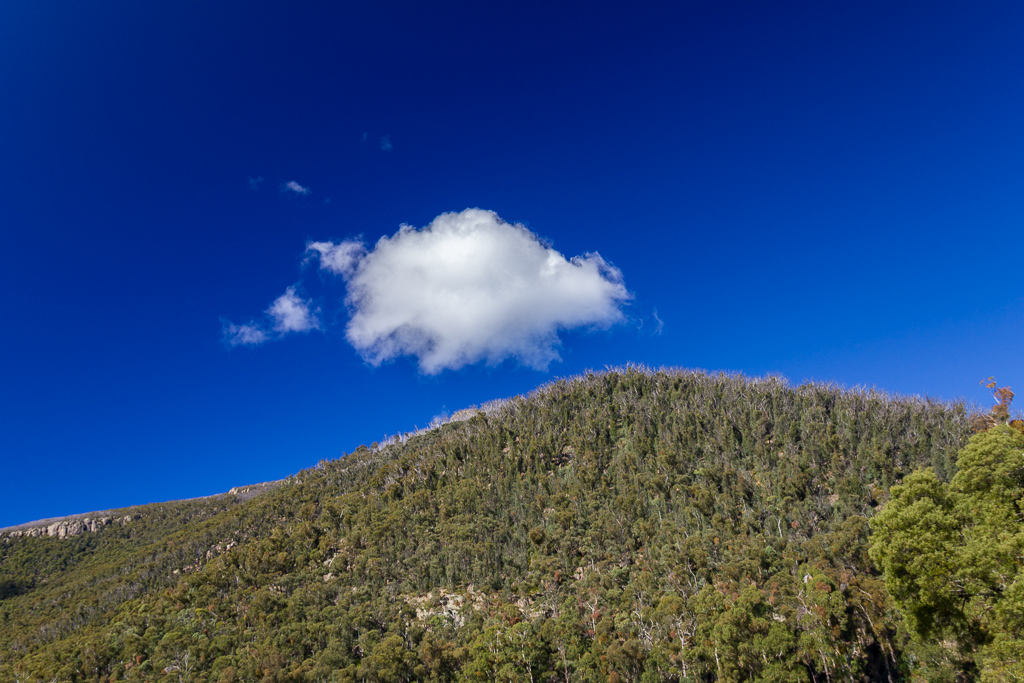 The Sentinels loom over the lake

During this time of doing nothing I lost my mojo for exploring further. It was fine though, as I had peaceful time lying in the sun next to the lake. Sure I didn’t have the photos of the waterfalls, but they’ll be there in the future for another visit. I took some pictures and noticed any spot in the sun had small clouds of steam rising up as the area began to warm after a freezing night. 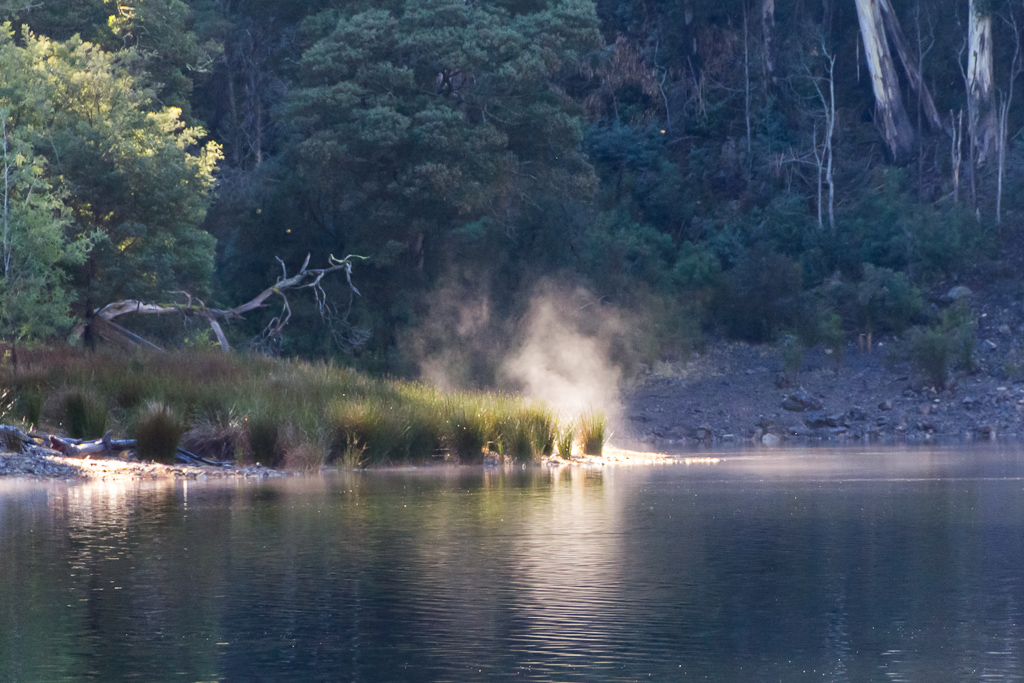 Steamy areas in the sun

There air was quite still, so there was a barely a ripple on the lake surface. With the water like a mirror, I took a number of ‘reflection’ photos showing pieces of wood and logs that were protruding from the water. The pictures should have looked great, but for some reason I couldn’t really capture what I was seeing. Maybe a wide angle lens was needed, but overall, my lake photography was underwhelming. 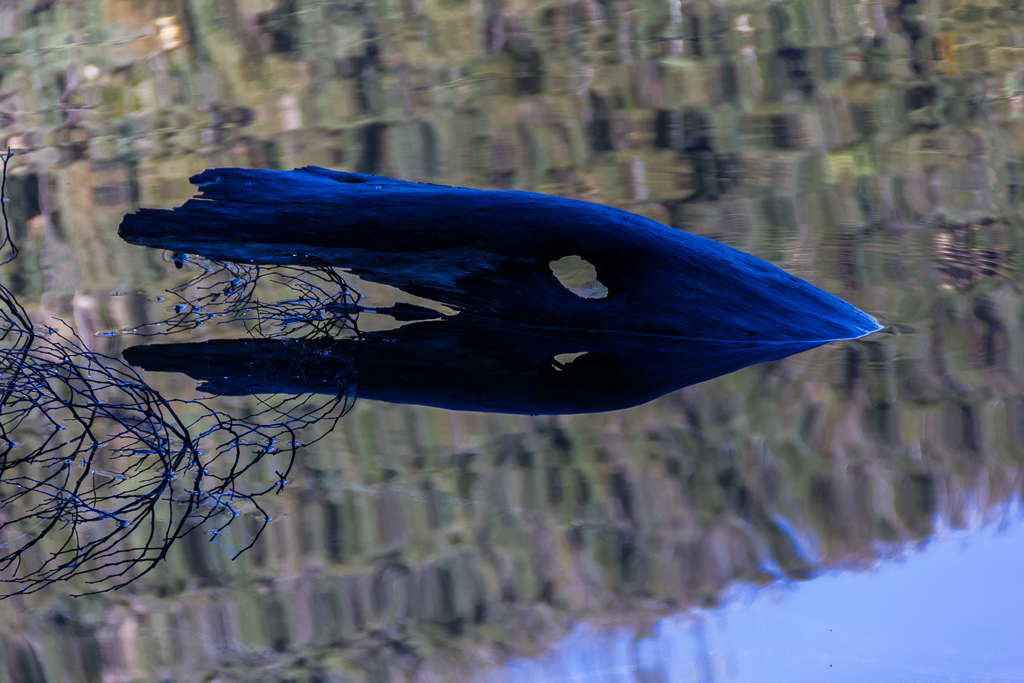 It was getting to the point where I thought I should tackle the zany climb back up Gillios Track. As I headed to it, I noticed the sign stating it was ‘Gillio’ Track. Hang on? What happened to the ‘s’? It must have been fired or maybe the Parks Victoria pay per letter when they’re getting signs done? Well, I have no idea what the name of the track is now, but I’m only going by what my map says in front of me! 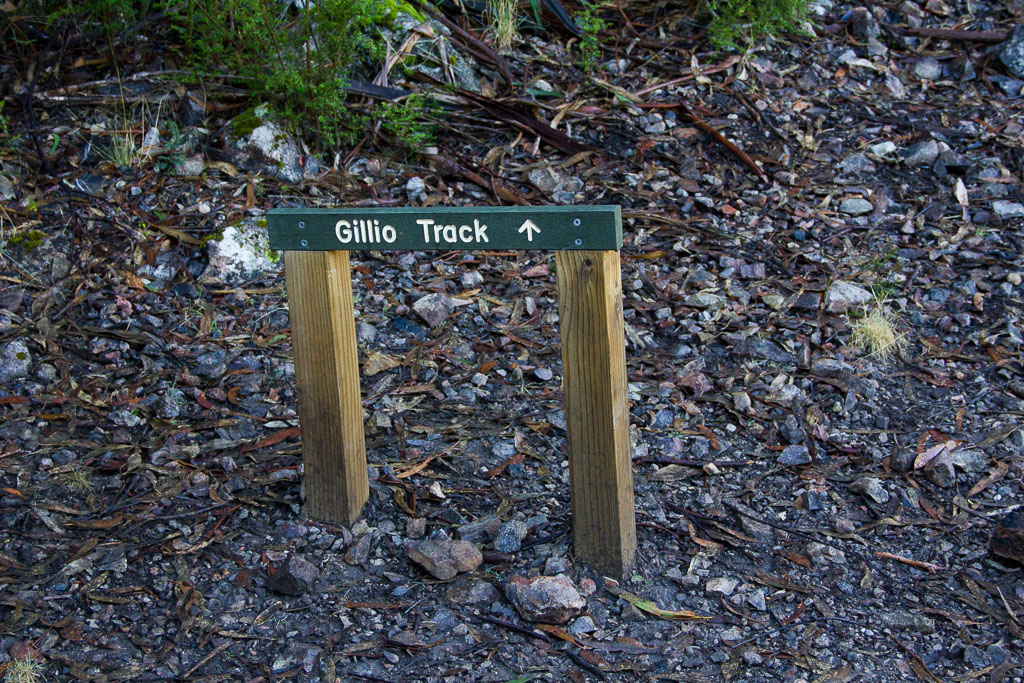 This must be the start of ‘Gillio’ Track

I took some final photos as I left and it pays to have another one of The Sentinels, which is a 1519 metre mountain that looks down on the lake. 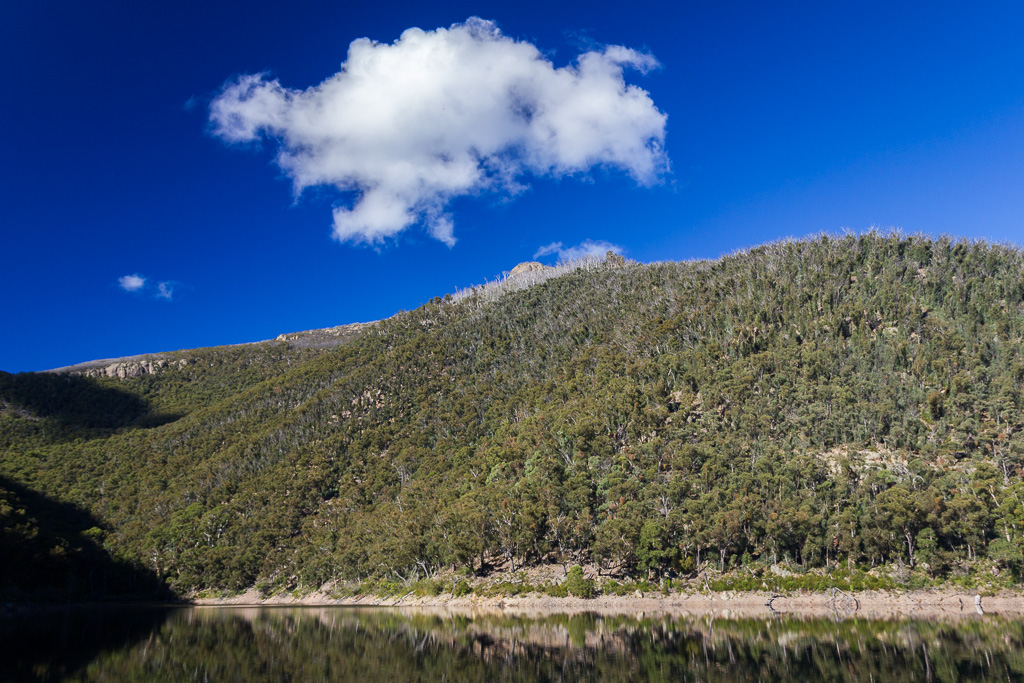 The track going back uphill didn’t disappoint, as it’s quite a slog. I was certainly getting my moneys worth and was thankful I wasn’t carrying a full pack. It was hard to capture on film (how unusual on this day) the slope of the hill, but the photo below is the best I could do. 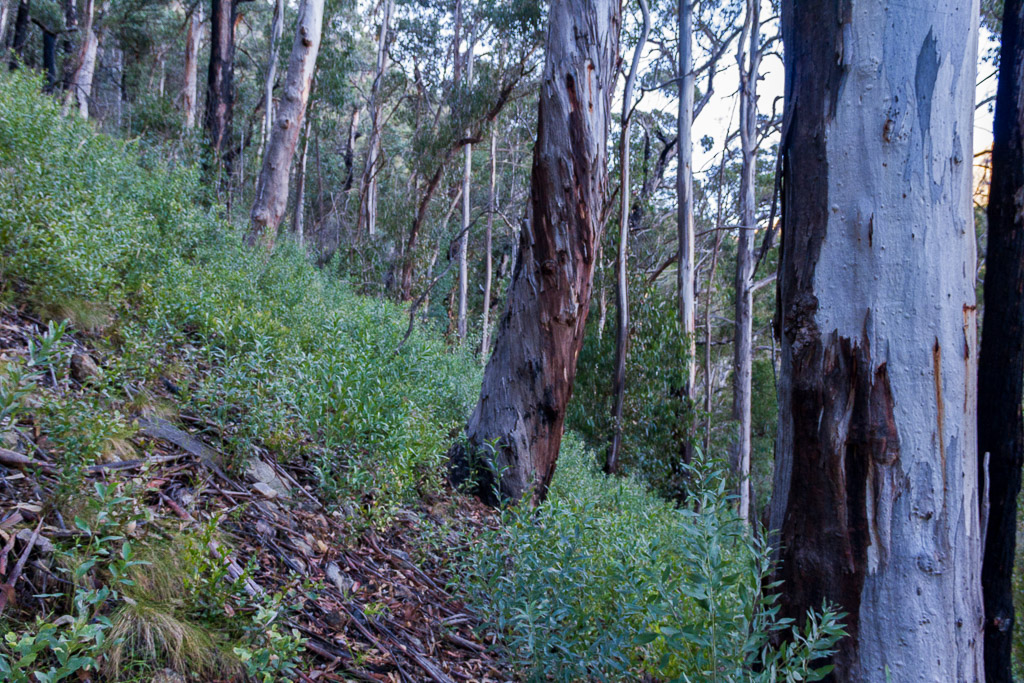 Although the climb is rather tough, I enjoyed going up it more than coming down. Walking downhill is a bugger for my knees and there’s half the stress going in the opposite direction. Sure, I’m aware of the trade-off concerning overworked lungs. Then again, I thought it would take a lot longer to climb the track and I was surprised how easily I zipped back to the top. I did have a few five minute rest stops on the way, so don’t get too carried away thinking I was sprinting uphill. 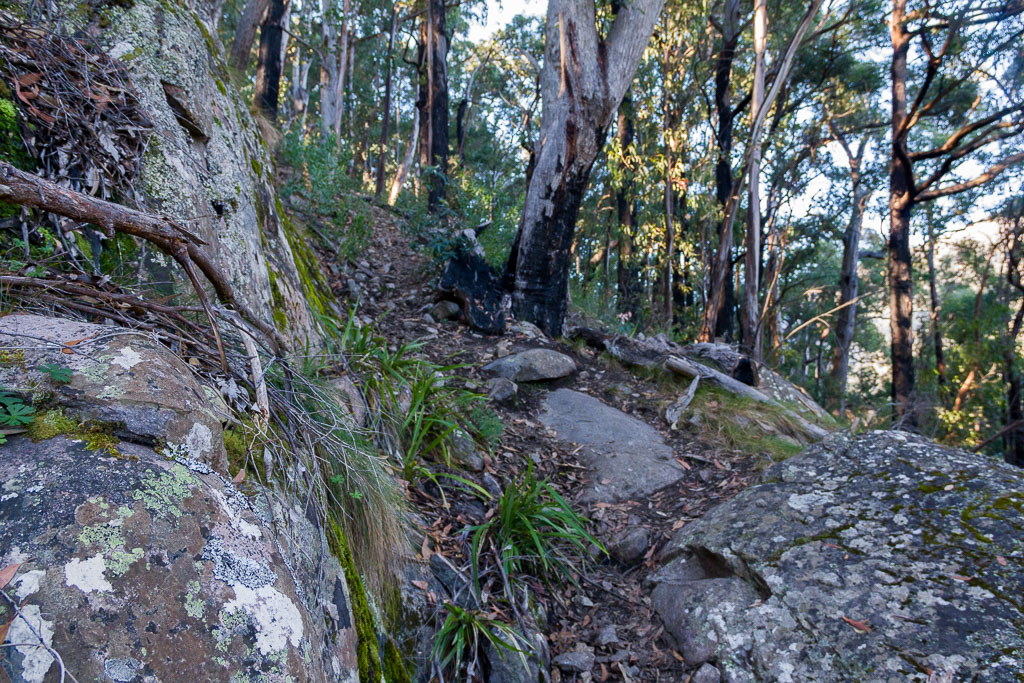 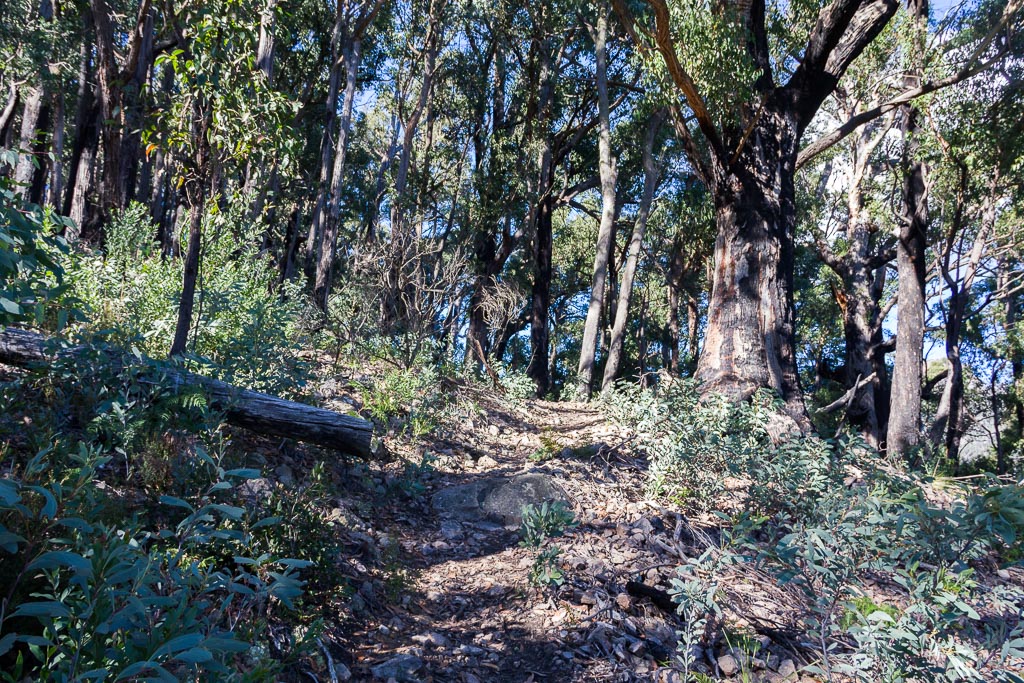 I reached the top in the early afternoon and returned to my tent. I was considering staying an extra night, but something was giving me the vibe I should head home. A few clouds were starting to accumulate and I wasn’t sure what the next few days weather forecast was to be. In the end I figured it was best to leave. I packed up and considered climbing Spion Kopje mountain on the way back, but I had a funny feeling all day something wasn’t right somewhere, so I just started walking straight back to the car. 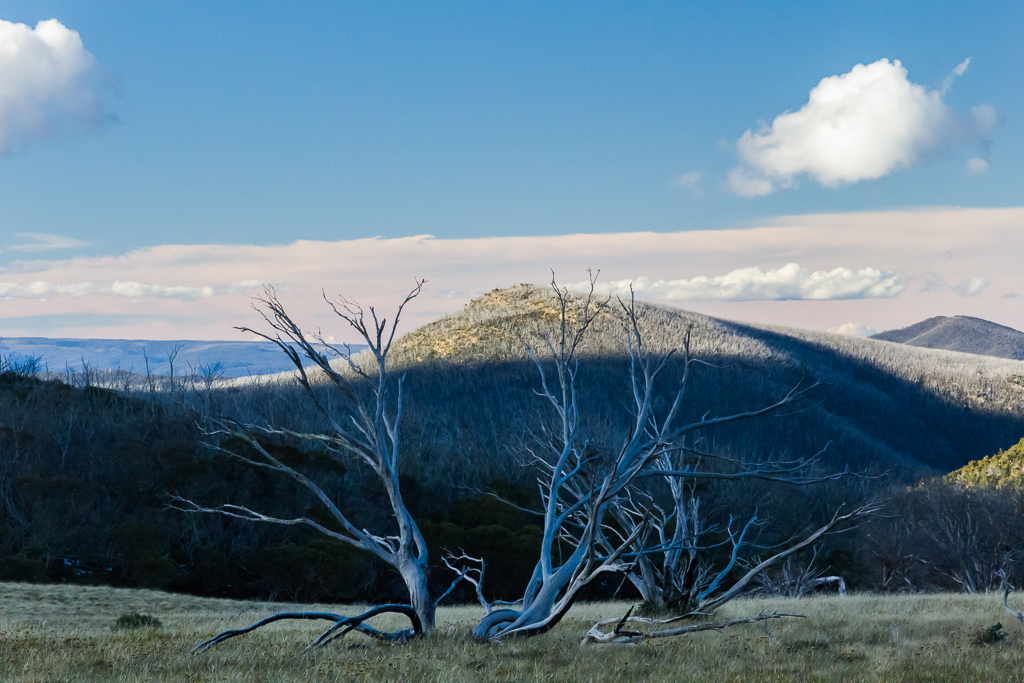 It was peaceful though, with no people to be seen for the rest of the day and I was banking on arriving at the car just before it got dark. 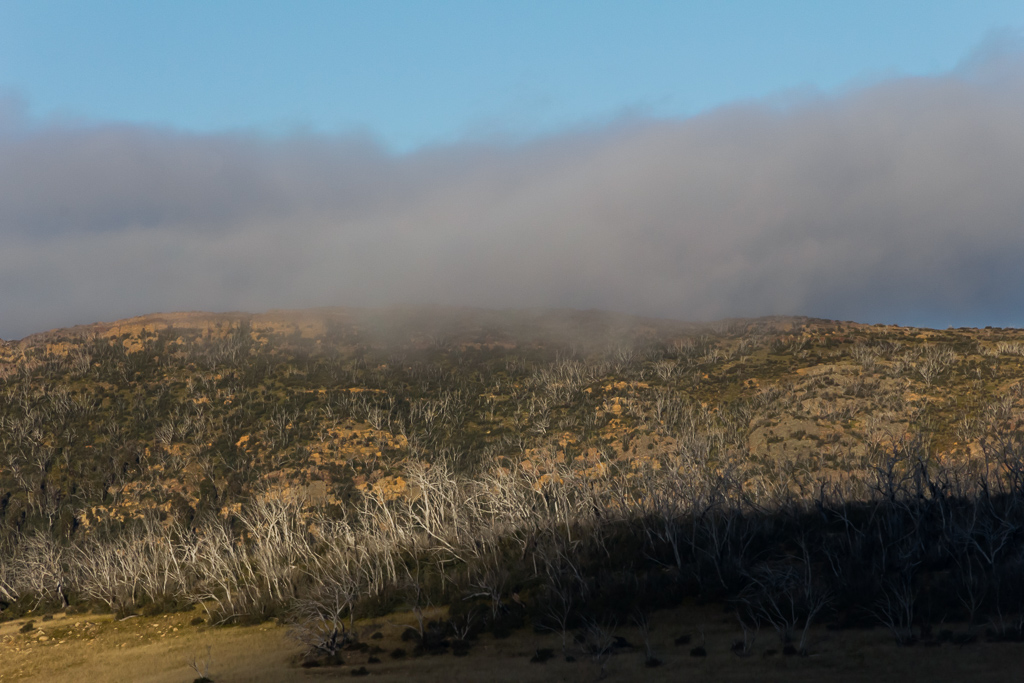 I’ve usually been pretty good lately in that not many walks finish in daylight! The stroll back across Wellington Plain was lovely though, with the sun shining off the many snow gums along the way. 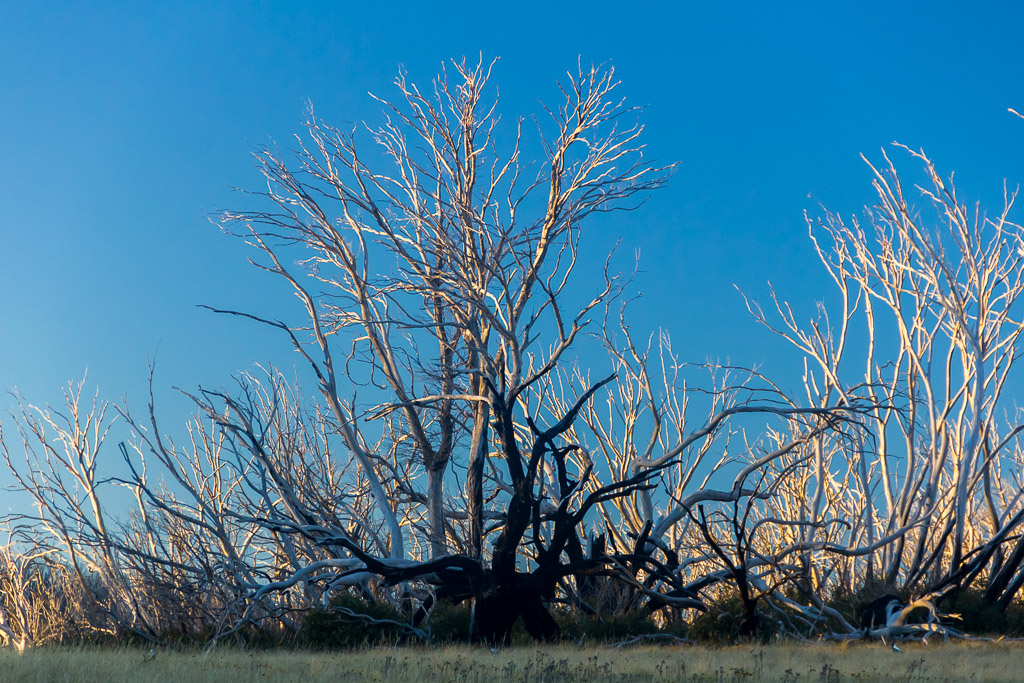 I passed Dunsmuir Hut ruins again and I must say, it looked a lot nicer in the bright sunshine the previous day. 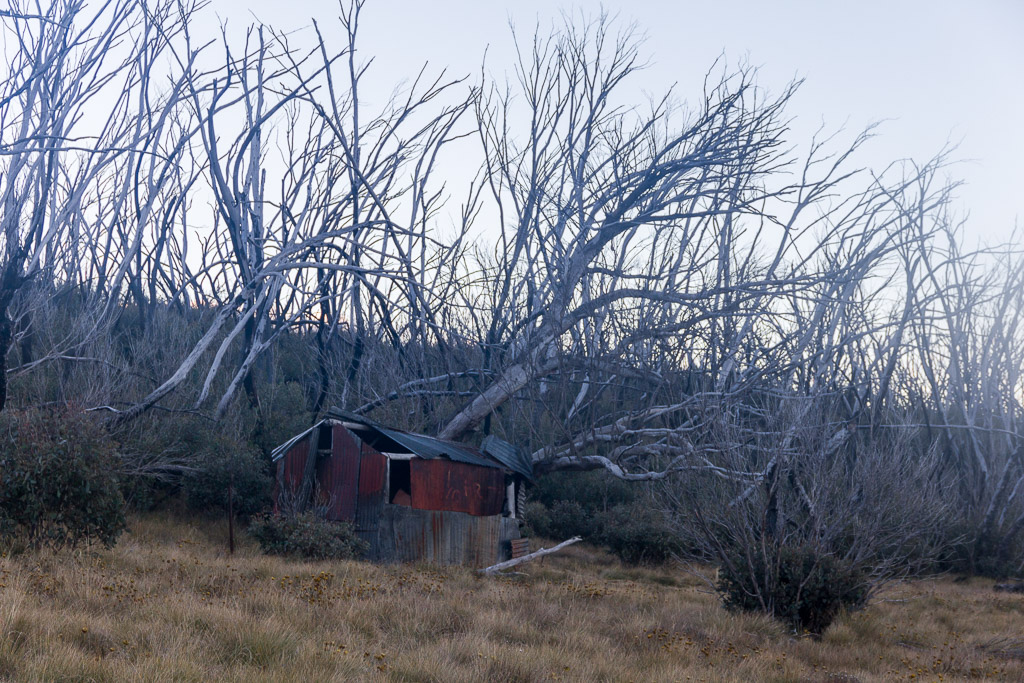 There was a chill in the air, as the sun sank lower in the sky. Mind you, I couldn’t help stopping to take a million photos of the bright white trunks of trees. There’s a problem taking so many photos though. Later on it’s harder when deciding which is the better picture. The idea that says, ‘the trouble with choice, is it’s harder to make a decision’, seems to be quite correct when it comes to digital photography. Like most people, I take hundreds more than my film days. Anyway, here are a few more trees. 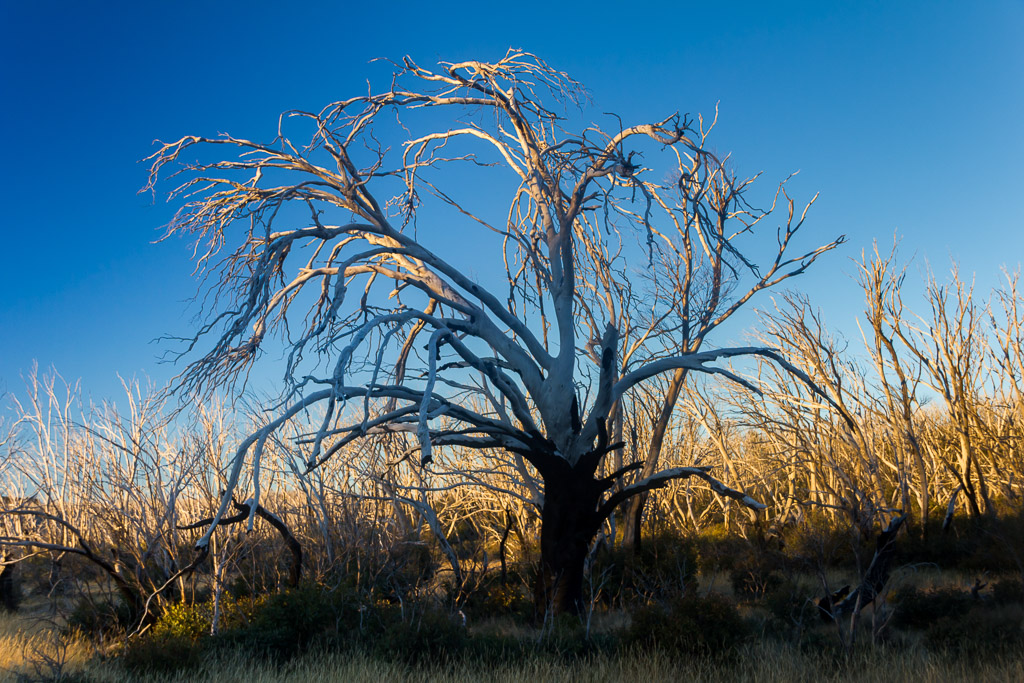 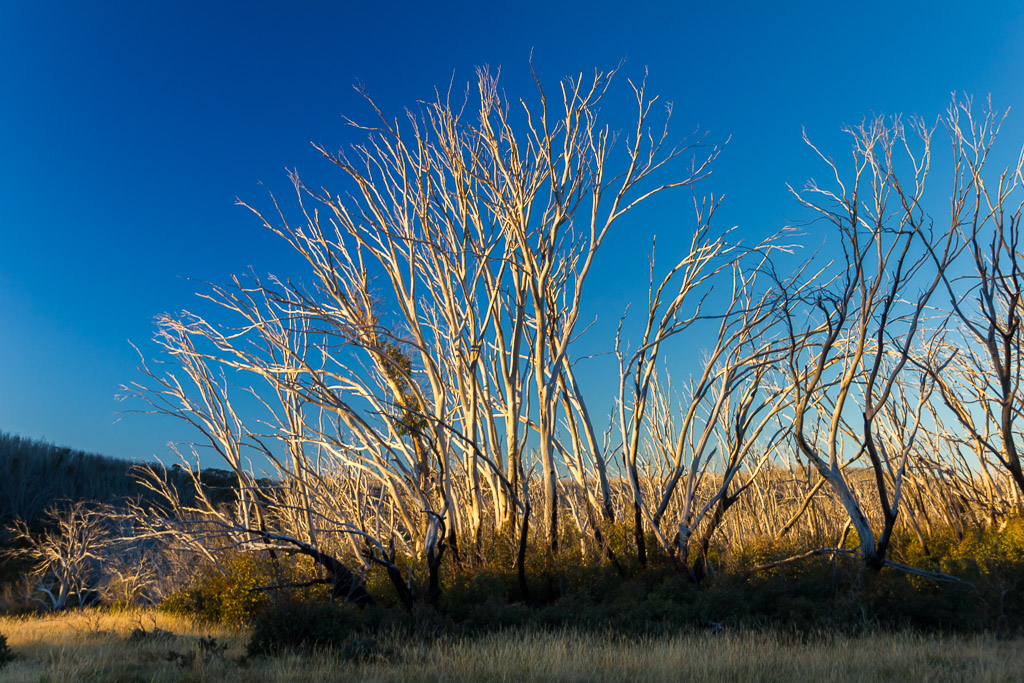 As I was getting close to the car, I managed to take a few more pictures as the light began to fade. I was really starting to cut it fine in regards to finishing the walk! 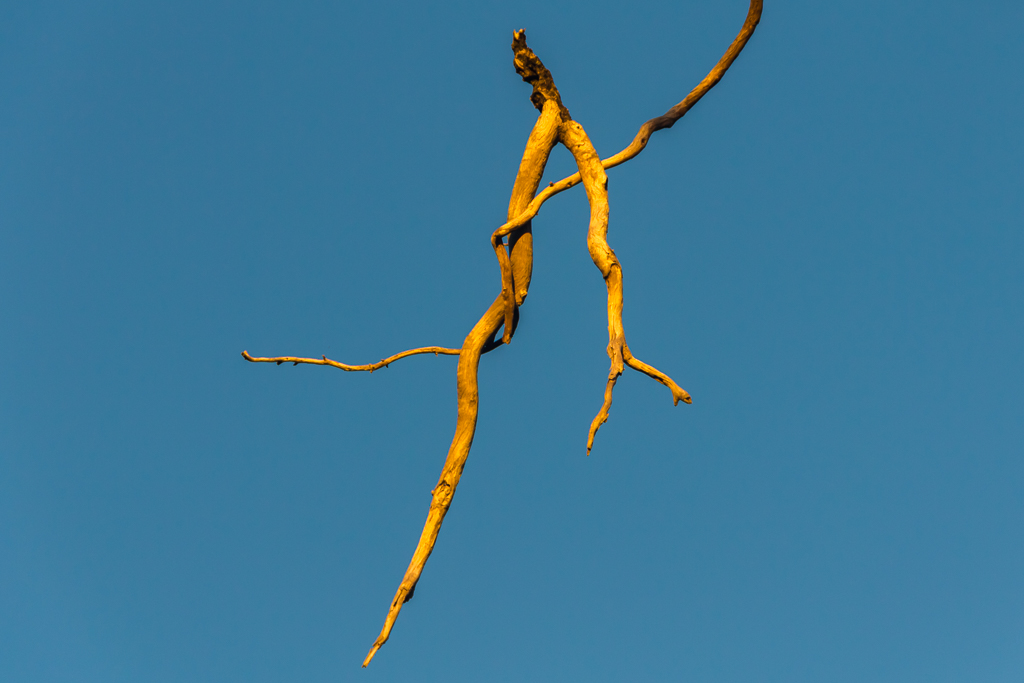 The sun was just about gone when I reached the car and went through the task of throwing everything into the boot and taking off pronto, as I now had the drive down the mountain in the dark to contend with. 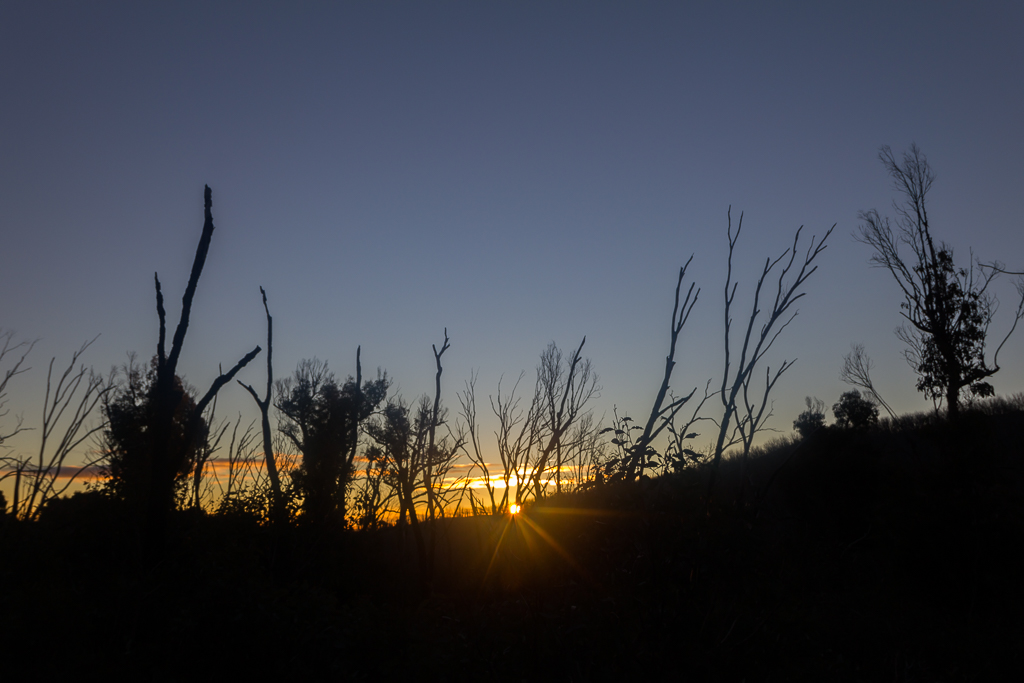 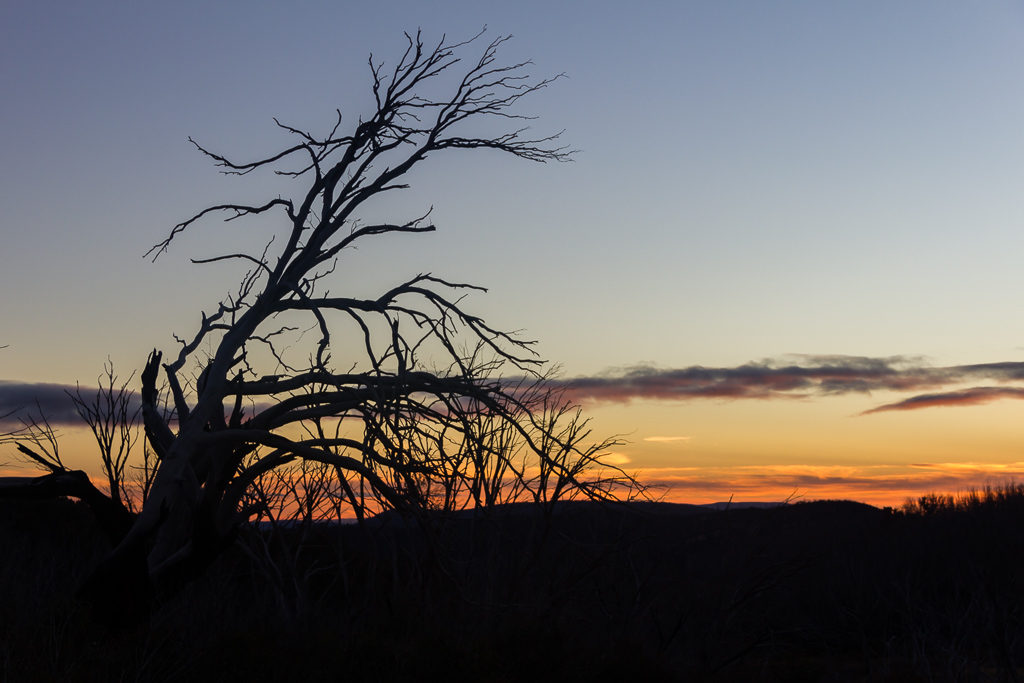 It was a bit of a long drive home and I didn’t see another car for the next 105 kilometres (yes, I was checking the odometer as I was feeling a little bored).

Anyway, on the final day I had walked 17.67 kilometres and the total elevation climbed was 792 metres, which was a fairly solid workout I thought. Climbing Gillios Track was where nearly all of those climbing metres were done in only a few hours so I was feeling a little stuffed.

In two days the total distance walked was 32.82 kilometres and total elevation climbed being 1199 metres. It’s a great walk which I’d like to do again, but next time I’d like to come into the lake via the Wellington River route. The ideal way would be to start at McFarlane Saddle and finish along the river, but a bit problematic if solo.

What’s odd is the funny feeling I had all day that something wasn’t right. Guess what? When I got back to mobile phone range I received a message to contact my bank urgently. Mm…I can’t say that happens too often.

As it was evening I had no idea though. The following day, I found out my credit card had being pounded by unauthorised transactions of $2733 by someone overseas. Isn’t that weird? Maybe it explains my uneasy feeling during the trip…