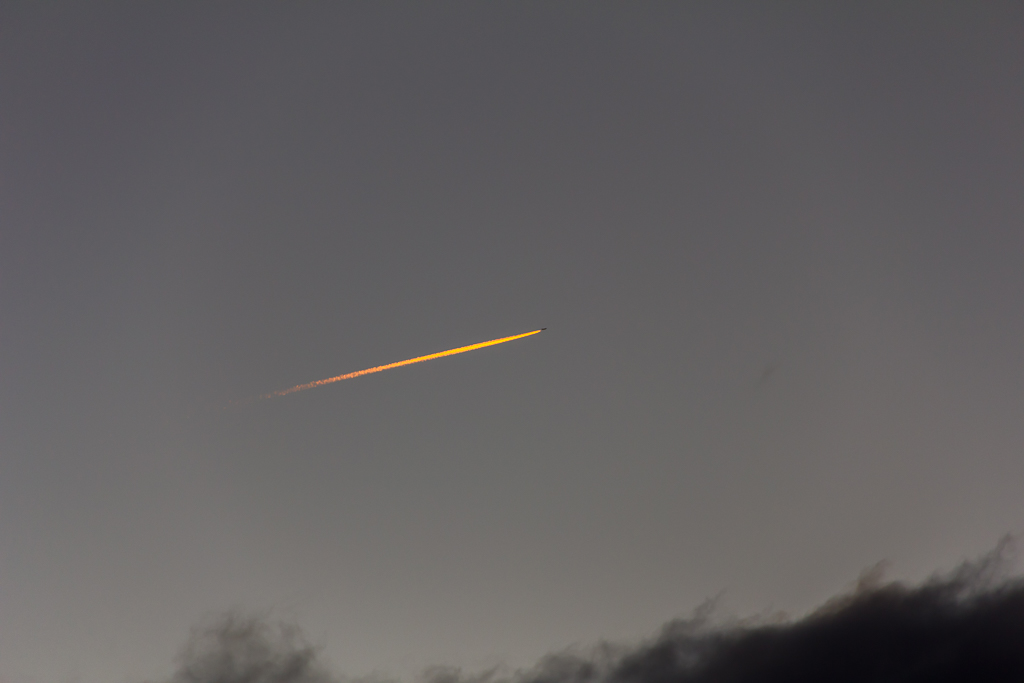 First things first. I like to check my blog statistics and I noticed today someone used the keywords, ‘sexy man walking out of waterfall pics’, in a search. As a result, somehow they found my blog. It’s a little surprising, as I don’t remember posting too many racy photos?

Anyway, I wasn’t lying when I mentioned in my last post that I was going on a hike. Yes, I managed to extricate myself from the couch and do an overnight walk to Mt McLeod, which is on the North Buffalo Plateau. Guess where that’s near? If you surmised Mt Buffalo, you’ve done well in your guessing.

It’s listed as a long day hike, or a comfortable two day walk with a remote campsite tucked away under Mt McLeod itself. I had the time and it would be more relaxing to do it in two days, plus I had all this new gear to try out.

I loaded up the car and drove towards Mt Buffalo, which is a million kilometres away on the eternally boring Hume Highway. I’ve never disliked a road so much for its sheer monotonous feeling and it was a relief to arrive at Mt Buffalo. Any longer in the car and I would have undone my seatbelt and driven into the nearest tree at high speed. 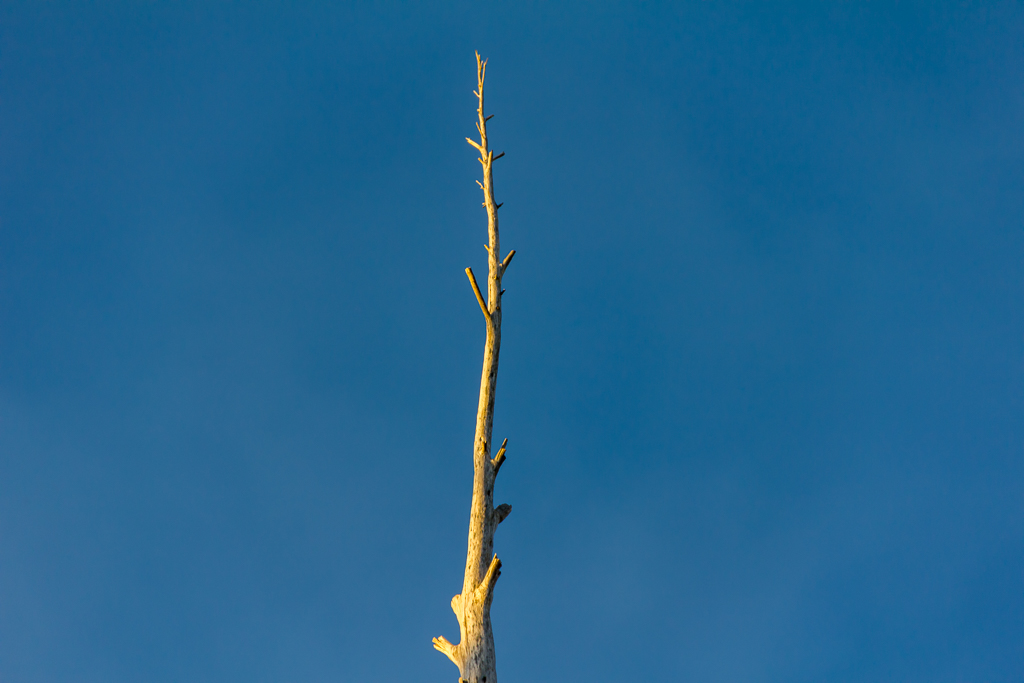 As Mt McLeod is classed as ‘remote camping’ I had to have a permit from Parks Victoria. This of course I hadn’t organised, so a quick stop to their office at Mt Buffalo was in order to pay the $5 required. It sounds like a token amount of money, doesn’t it? You think it wouldn’t be worth their while, but maybe they use it for lunch money or something like that. With permit in tow, I was off again to park at the start. I was a bit behind schedule and found myself rushing a little, as I only started walking around 3 pm. It was only 8 km on the Mt McLeod track to my intended camp at Dels Plain, so I was sort of confident in making it before dark.

Whilst kitting up, some bloke appeared from a neighbouring track and we went through a cordial ‘hello’ procedure. Everything was fine, but whilst I was resetting the GPS, it suddenly became a topic of conversation. “Whoa, you won’t be needing that! It’s a track all the way!” I smiled and replied, “Oh, no worries mate!” when in fact I was thinking, “Ease up pumpkin-head, the GPS is not for navigating on this walk, it’s for recording distance and mapping so I can attach it to this stupid blog.”

It wasn’t over though as I was pounded with, “It’ll be cold out there tonight. I hope you’re prepared!” I was still smiling while replying, “Yeah, I’ve got my winter woolies with me” whilst thinking, “Really? I thought it was like the surface of the sun on this alpine area and I only brought my dick togs. Damn!”

What’s with people who don’t ask questions or engage in conversation, but voice half-baked opinions instead? You’d think the majority of hikers would be zenned out, at one with nature types, but instead it’s awash with patronising pains in the arse. All I wanted to do was put one foot in front of the other and this bloke was busting my balls. 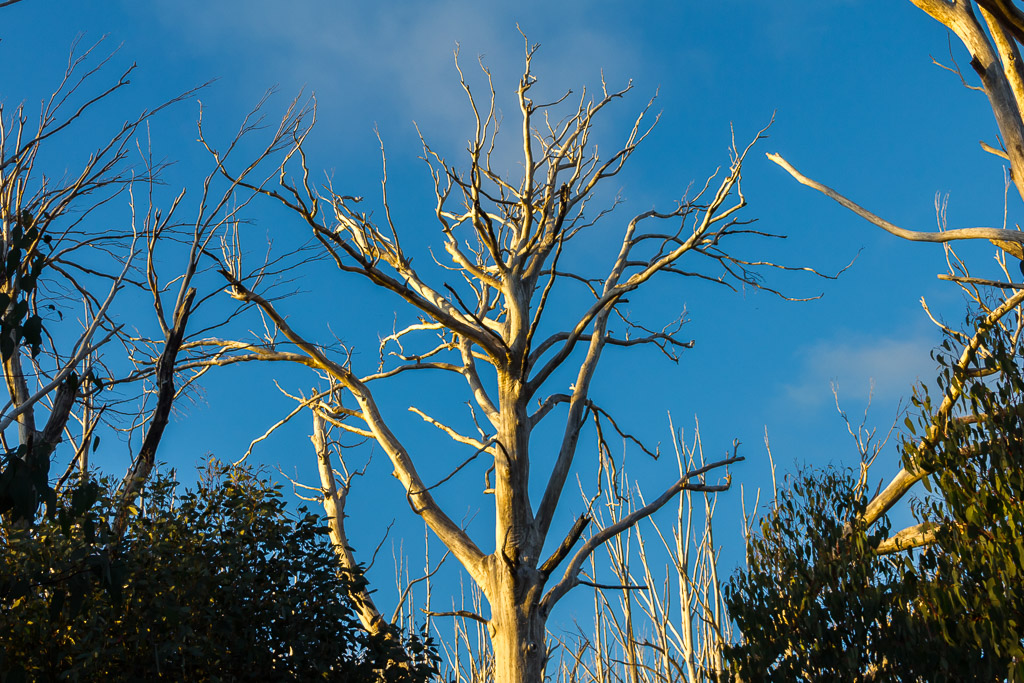 It was now time to start walking on a well defined 4WD track. Actually I keep reading online it’s a ‘Jeep track’. What’s going on with these American words? I don’t know of many ‘Jeeps’, but I know plenty of 4WD’s.

Anyway, the first decision of the day was a side-track, which was signposted as ‘Shortcut to Mt McLeod’. That sounded quite nice as it was getting a little late in the day, so off I headed on a winding track that wasn’t too bad. 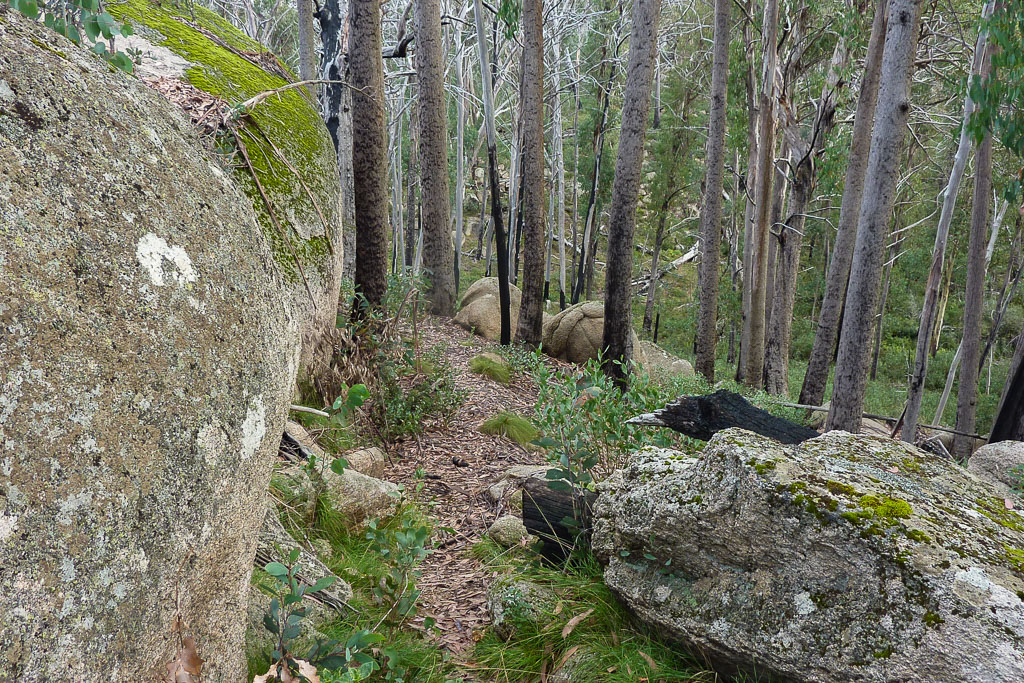 There was one minor problem of negotiating a fairly substantial fallen tree. I had to employ the ‘extreme straddle technique’, but as it was on a slope, I commenced sliding down its wide girth, instead of going over it. There was a moment of ‘mouth wide open’, as I endured a ‘nad sizzle’ and by the time I got to the other side my voice was a little higher. I continued to walk bowlegged until I reached the main track again and then it was quite comfortable undulating walking for the next hour or so. 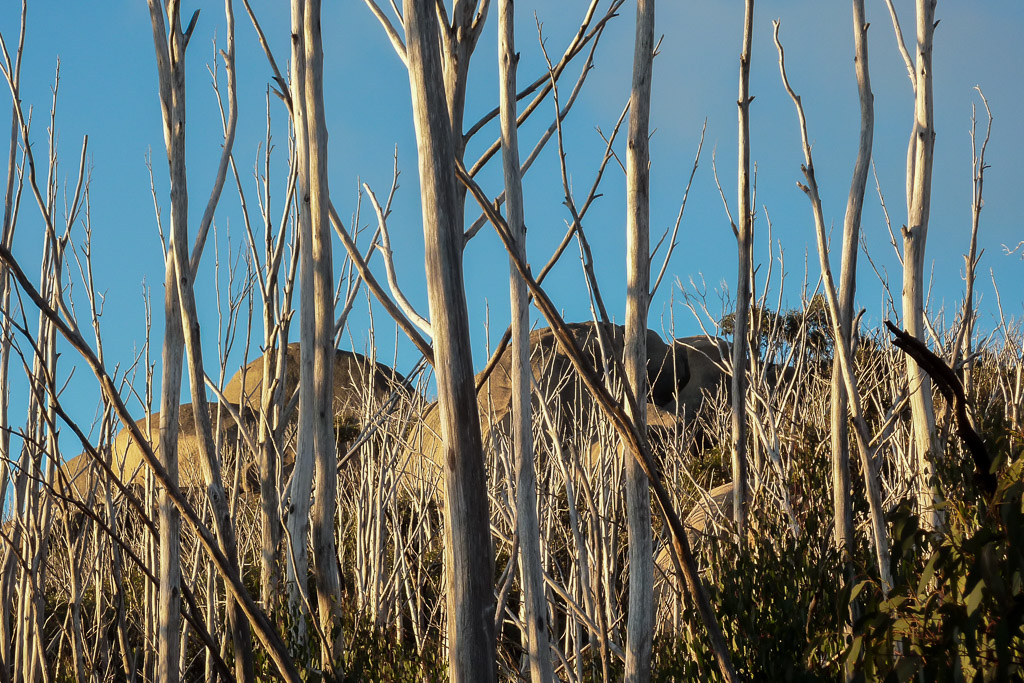 I quickly worked out the hike was fairly restricted in views due to the trees lining the track. It was quite nice though to see the setting sun give a nice glow to the surrounding area, but I had to put the power down as I was a little worried it would be dark before I made it to camp.

As I did so, I noticed the air was becoming a little chilly and this was confirmed when I stopped walking to take a photo and I noticed my breath was steamy, plus another mist was coming off the top of my head. I felt a bit like Ghost Rider with a flaming head leaving a trail of steam in my wake. 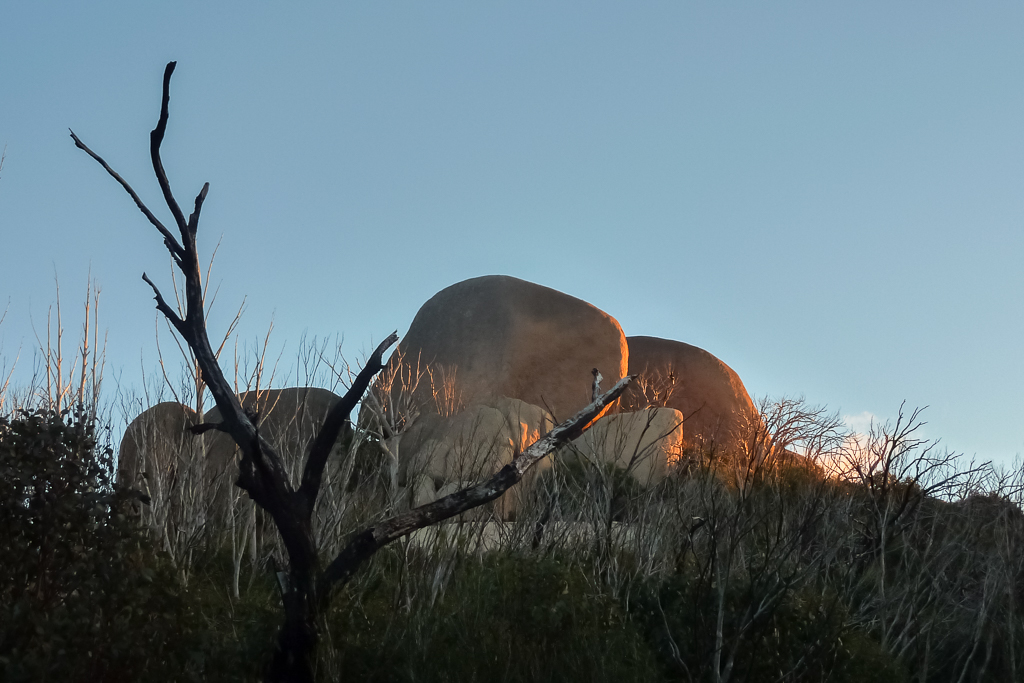 I passed a nice set of boulders, which are called ‘Three Rock Peak’. I figured out the name has been acquired as it has three prominent rocks sitting next to each other. Did you guess that before I explained it? It must have been named by some bloke who was either bored or drunk and couldn’t come up with anything better. “Hey Derek, look at those three rocks, shall we give them a name?” “Sure, we have the following options. Three Rock, which sounds a bit like a rapper, Three Rock Peak or Big Booby Rocks.” 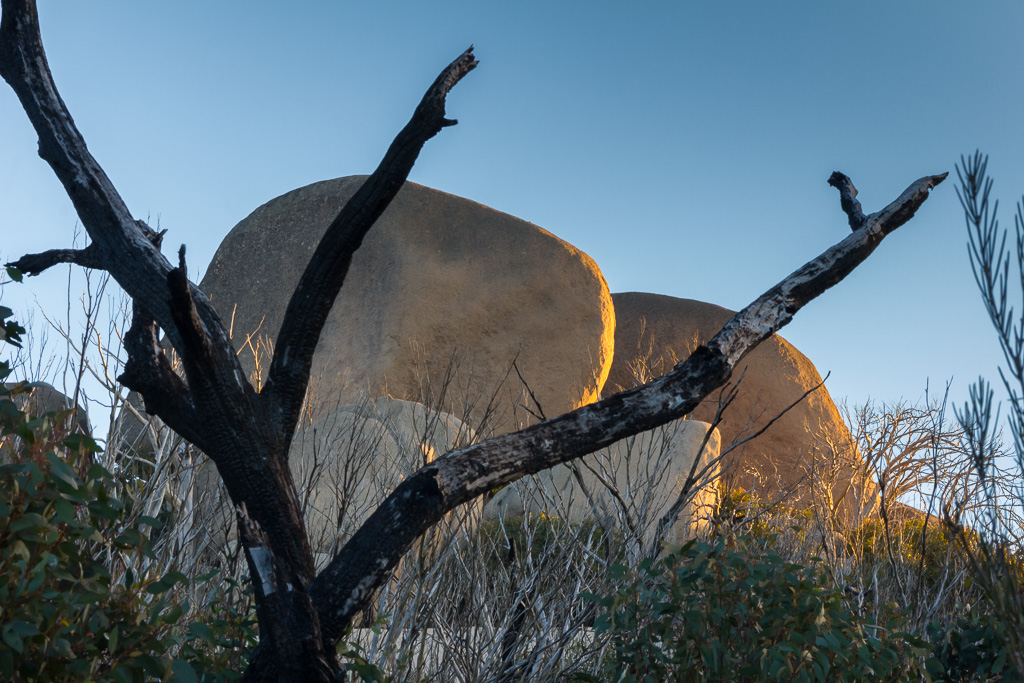 Moving on, I was ready to get out the headlamp when I suddenly came to a large clearing. Even better is this open area had a ‘Dels Plain’ sign, which is the name of my intended campsite. Lucky me. I could still be walking around there in the dark.

Due to the rapidly fading light, I figured I should put up the tent before doing anything else. It was time to get out the Big Agnes Seedhouse UL1 in the wild, instead of under the lemon tree at home. The first thing I can say about this tent is it’s insanely quick to put up. It seems so simple other than the guy ropes which I’ve not worked out exactly and are probably not needed unless the wind is howling.

Even better is there’s a motif on the fly, saying it’s from ‘Steamboat’. I’ve always wanted to ski there, but realistically I probably never will, so at least I have something with ‘Steamboat’ written on it. Okay, just ignore the tag on the inside that says ‘Made in China’ okay? 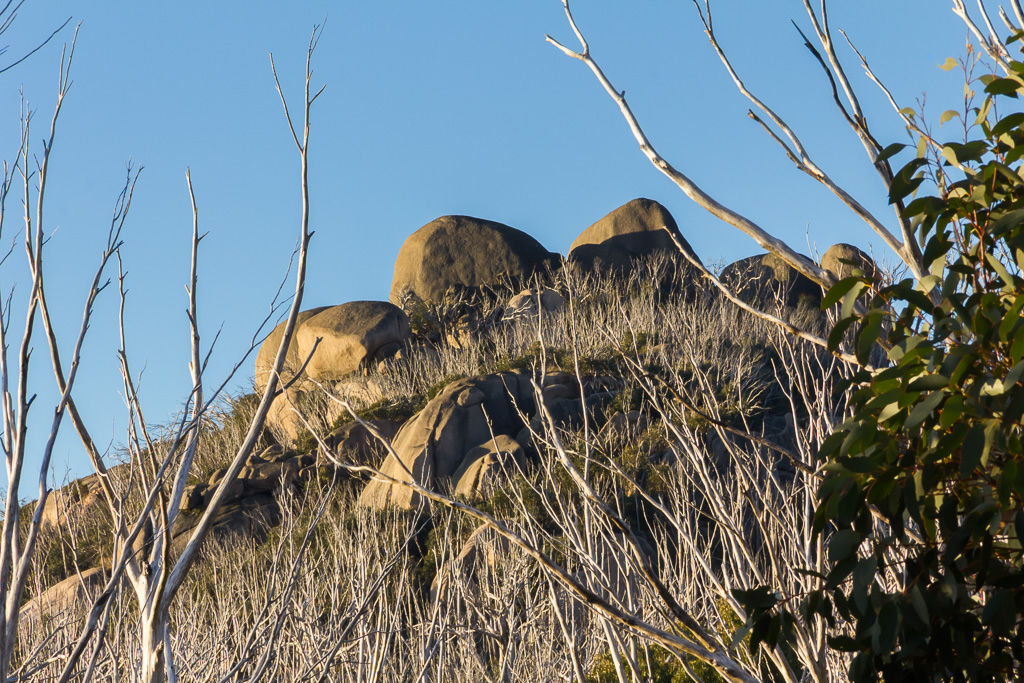 Whilst setting up I also noticed some colourful contrails from the odd jet flying by. It was quite impressive, but I didn’t realise it was the first of at least fifty I’d see over the next day. 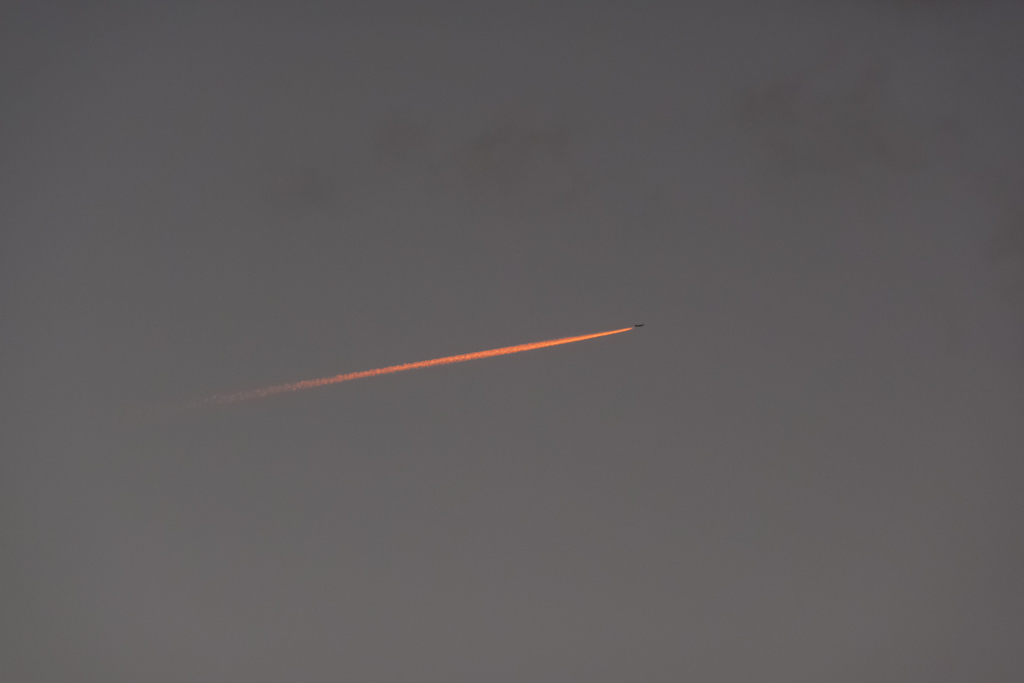 There was a bit of a sunset, which I was trying to capture before it all got too hard. The camera lens fogged up as the temperature dropped and I couldn’t be bothered trying to fix it. Having something to eat seemed more important than taking photos. 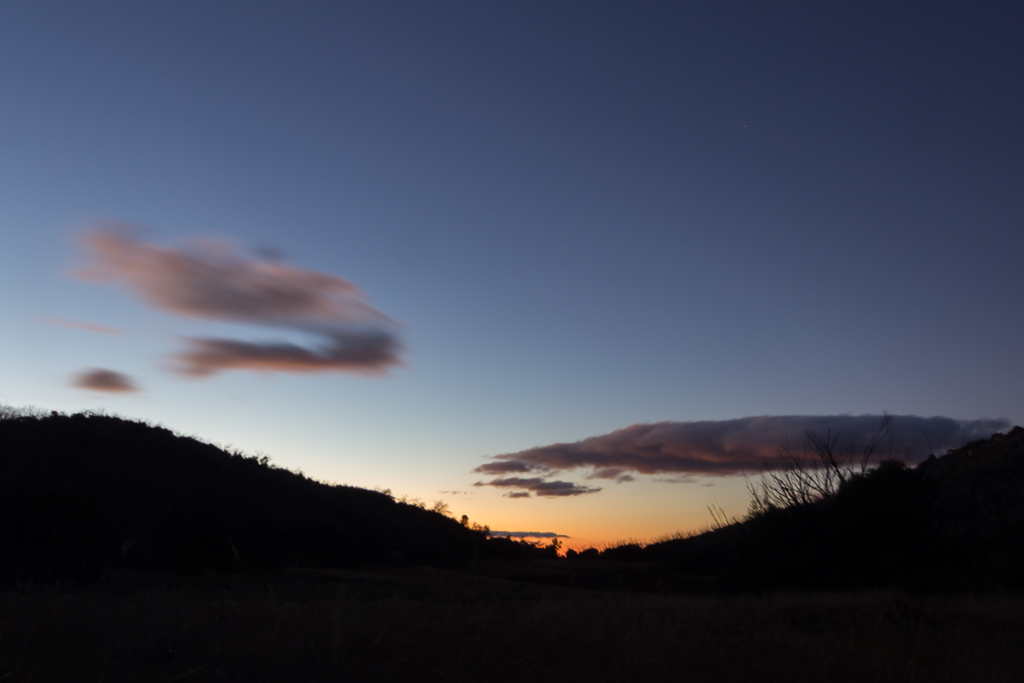 I got everything organised in the tent, before having to cook in the dark. With so much new gear to take in mentally, I thought I needed something a little retro to calm myself down. I decided to bring the Trangia stove, which I hadn’t taken out for quite some time. I had a cooked pasta that needed reheating, so I shoved it in the Trangia pot and went off to finish setting up the sleeping bag.

There’s one thing I forgot about the Trangia. It’s hard to regulate the heat once it’s going. I must have been too busy lying back on the grass admiring my new tent, when I suddenly realised I should be checking the food. When I’d finally worked this out, I zipped over and found the pasta had burnt the pot. Not just burnt, but incinerated, which was a bummer. In fact I’ve sent an email to Arnold Schwarzenegger asking him if he could scrub the pot clean, but he hasn’t responded so far. 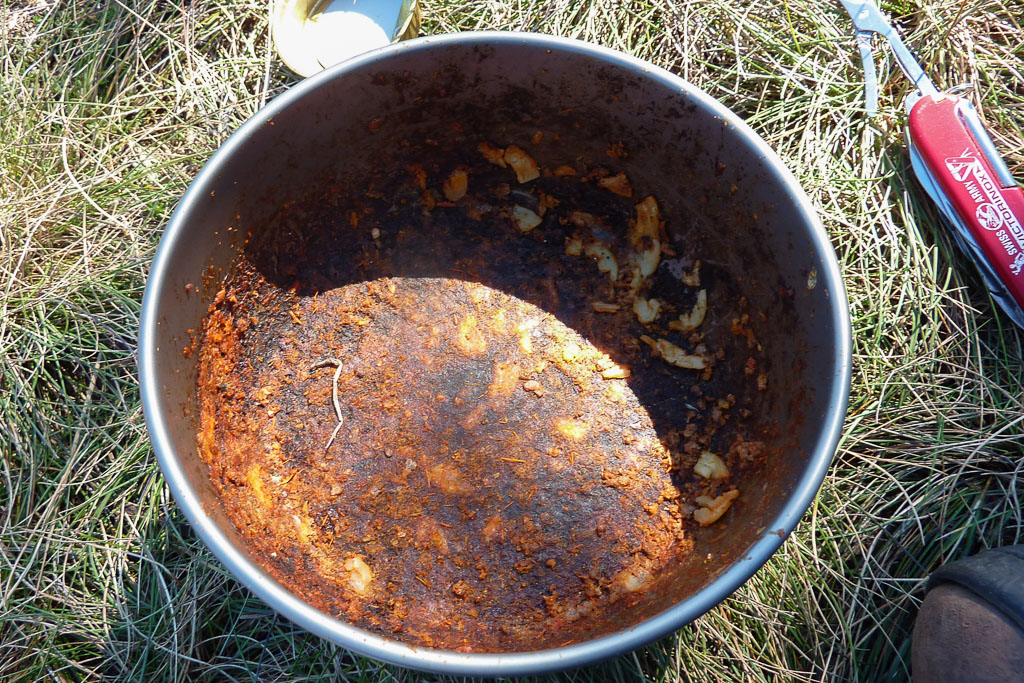 After surviving ‘BurntPotFiasco.com’ it was time to go to bed and see if my new Western Mountaineering Lynx Gore sleeping bag was up to the challenge of keeping me warm. With the camp at about 1400 metres and a clear sky overhead I knew it would be freezing overnight. I got in and it all seemed quite fine as I quickly drifted off to sleep.

The sleeping bag is a mummy style, which felt a little restrictive at first, but was definitely cosy. I was so cosy I suddenly woke up a few hours later pleading, “No mummy! No more!”. I felt like Krakatoa was ready to erupt with heat pumping from a hellish furnace inside the bag. I had to unzip and desperately try to suck in some oxygen before I fainted. Believe it or not I did survive, which is why I’m writing this now and not my stunt double.

I was awake for a few more hours recovering, whilst listening to the iPod and trying to work out what my top five songs were for the night. I settled on a group of songs that were made for easy listening whilst walking and they are; Anarchy in the UK – Sex Pistols, Bullet to the Head – Rage Against the Machine, Crystal – New Order, Nothing to Lose – The Brian Jonestown Massacre, but I settled with Hooting and Howling from Wild Beasts. How can a bloke sing like that?

Anyway, it was a crazy night in the tent under Mt McLeod with all that going on. The first days walking was pretty comfortable with only 7.60 kilometres travelled and the total elevation climbed for the day being 308 metres. Next post? The wander up Mt McLeod itself. 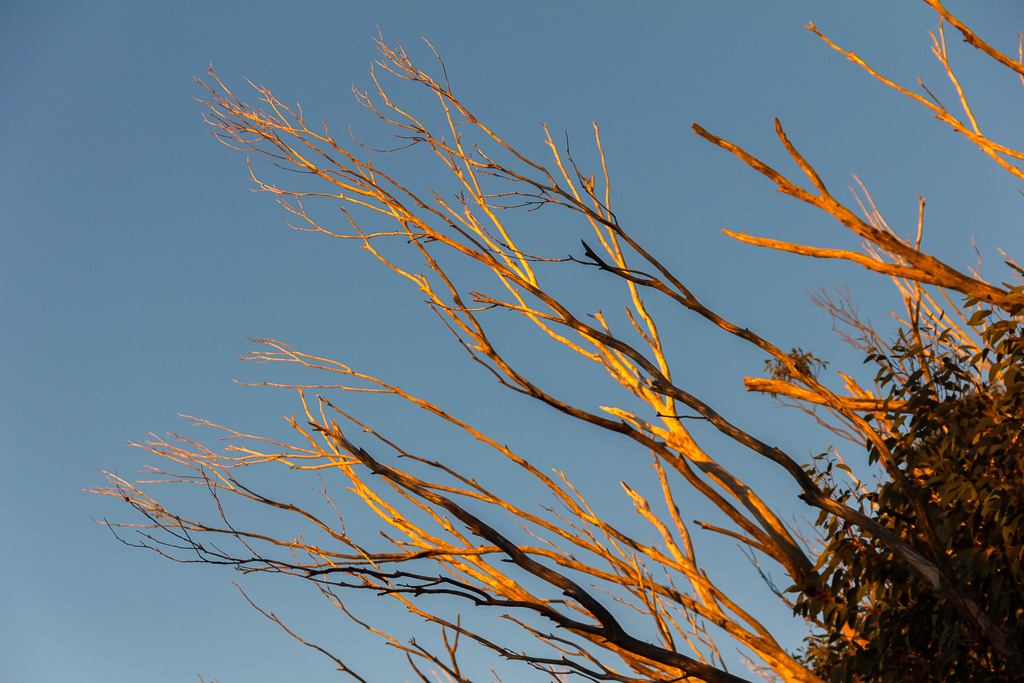 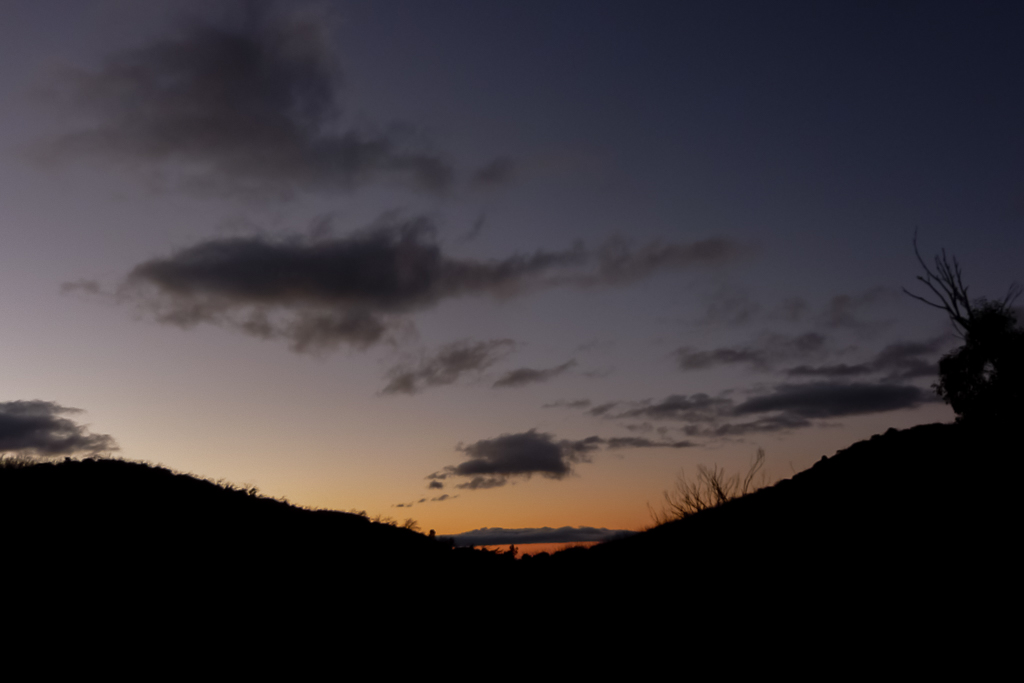