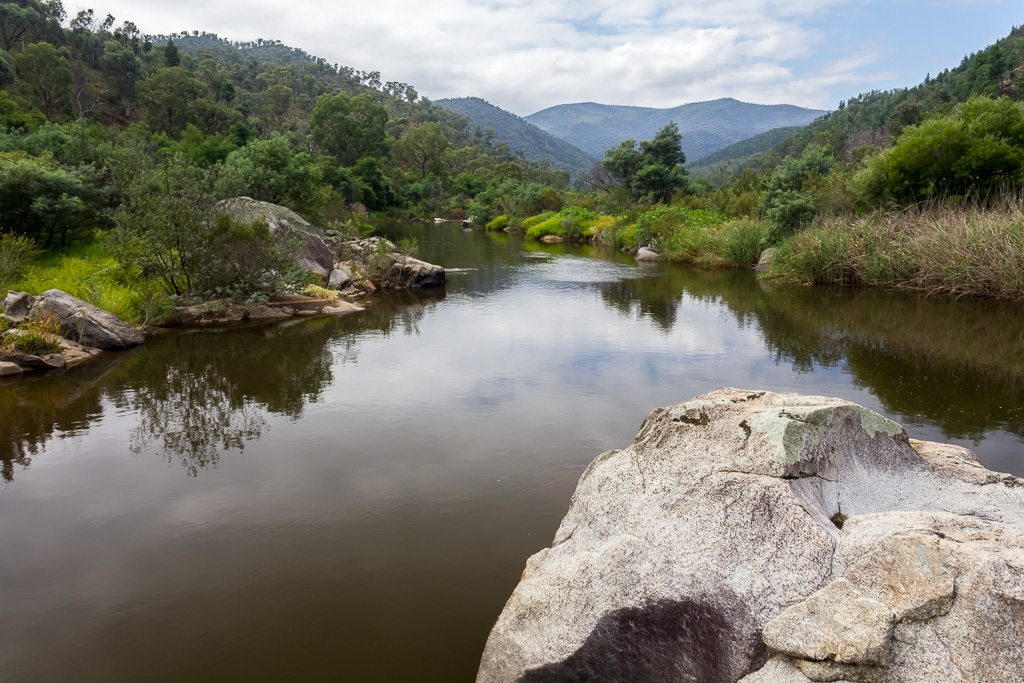 Well, I’ve recovered from the intoxicating vision of leaves from the last blog entry and have decided to write up the travels I did with MK after our Mt Kosciuszko hike.

The heading for this post sounded great until the ‘Barry Way’ part. How insanely Australian does it sound? I think the only way it could be better is if it’s ‘Bazza Way’.

After Mt Kosciuszko, our intentions were to head off and hike in the Budawangs, which is a spectacular National Park a days drive away, but there was a slight problem. The first hike had taken longer than we expected and I was blubbering too much to contemplate a back to back walk. Forget ‘hiking fiasco’, it would have been more like, ‘ticker gives up fiasco’ and ‘who’s going to write the blog now I’m pushing up daisies fiasco’?

Anyway, the plan was changed to go on a road trip instead. We’d follow Snowy River to Marlo via Barry Way. Sort of a road trip from mountains to sea. From NSW Snowy Mountains to the Victorian coast. Followed by a quick visit to Cape Conran thrown in. It did mean we’d have to drive on ‘Barry Road’ to get there though. Sounds pretty simple huh? 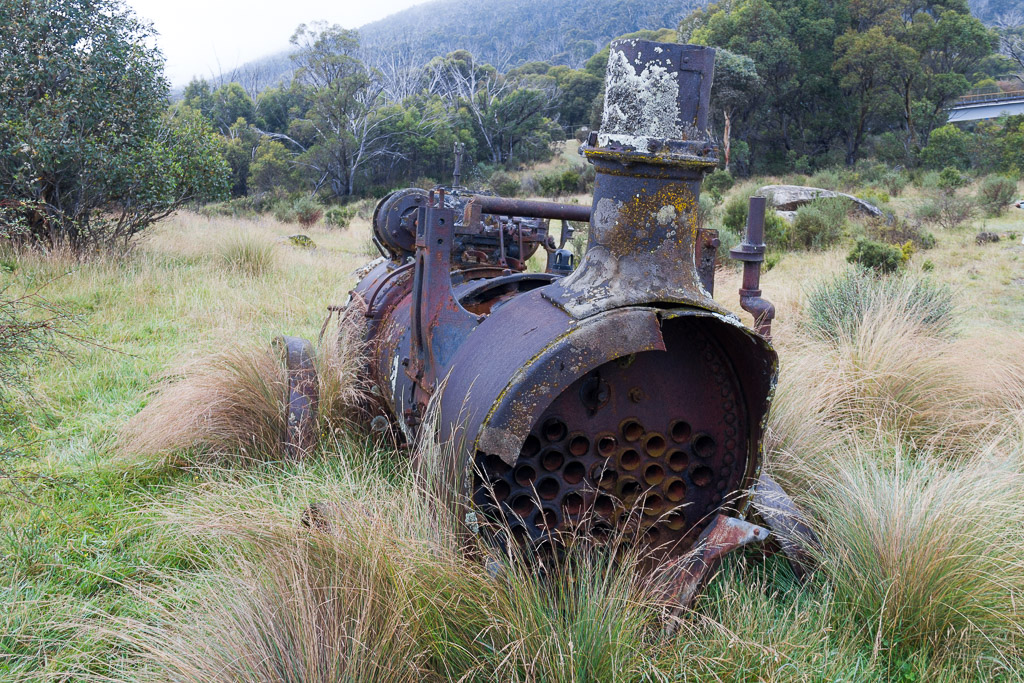 Don’t forget we also had the bikes, as they hadn’t been stolen from the back of the car whilst we were traipsing around Kosciuszko. This meant we had to use them I guess, as it wouldn’t make sense to lug them all the way without going for a ride, would it?

The first port of call was Bullocks Flat, which is a short distance away from Thredbo and that’s where we stayed the first night after the hike. The next morning it was out with the bikes for a bit of exploring, which wasn’t too bad with the odd item of interest.

We came across an old steam something sitting in a paddock that appeared to have long been forgotten. I believe it was used in the field by the ‘ye olde yahoos’ for a burnout action before they blew the motor. What did they do after that? The only thing I can think of is, “Yo, my steam machine has stopped and spare parts are a long way away in the mother country. I guess there’s nothing else to do other than have sex I suppose? I wish someone would invent a game with letters on little squares to pass the time. Oh well, time to give the trousers a bit of a schrabben I think.” 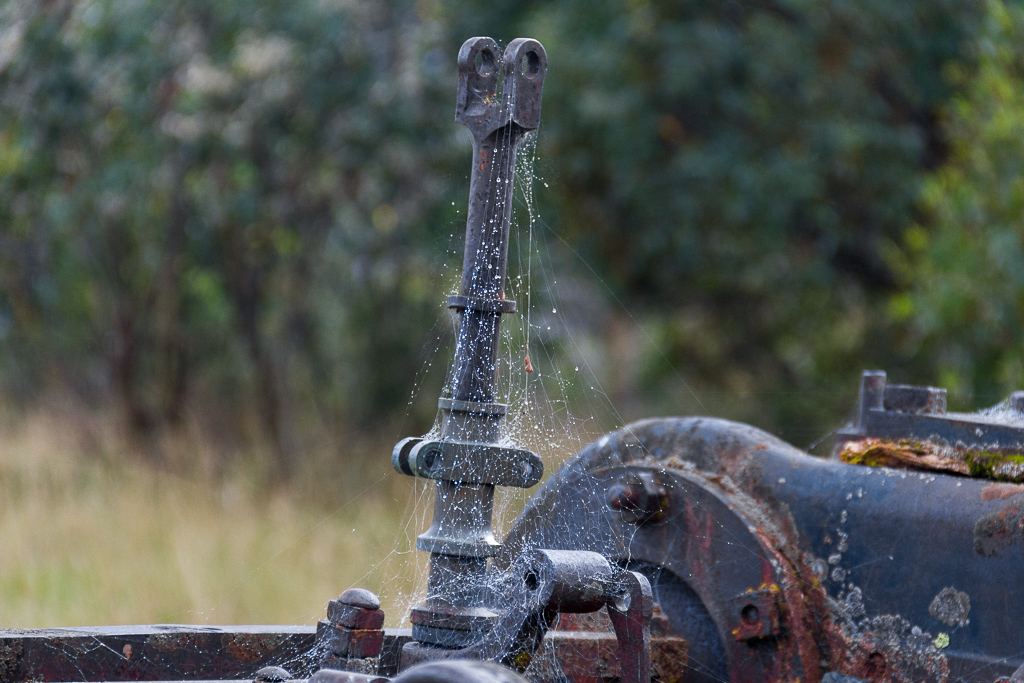 Wow, that joke was pretty obscure, so I hope you’re on the ball. It took me about 30 minutes of staring out the window to refine it into something legible and if you’re still struggling, give Google a go. Right, now that’s sorted out, we continued to explore and old metal lying around ended up being quite popular in the area. 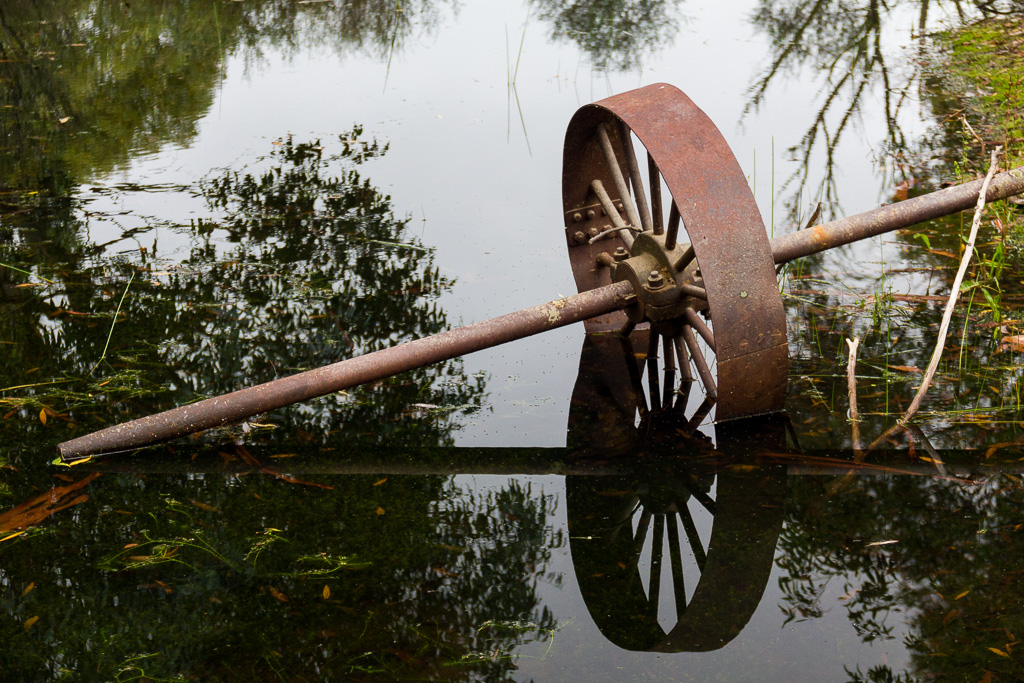 I think the bike ride in total was 7 km and I felt it was about 7 km too much. My legs were so sore from the hike that every time the gradient rose about the height of a standard lemon tart, I had to get off and walk. There was the odd native animal lurking around though which made things interesting. 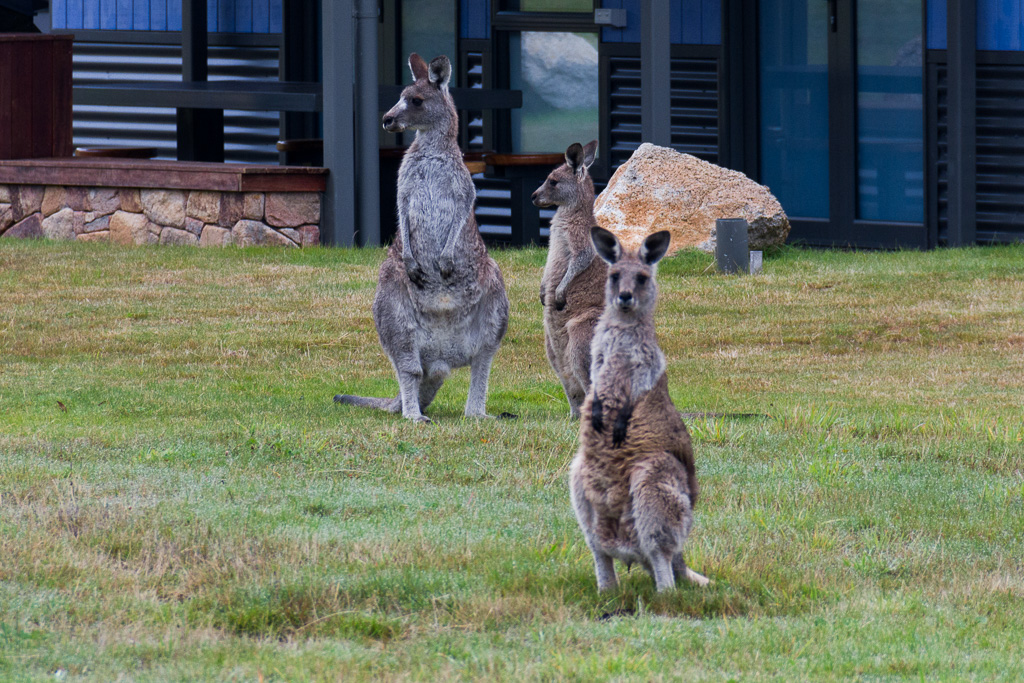 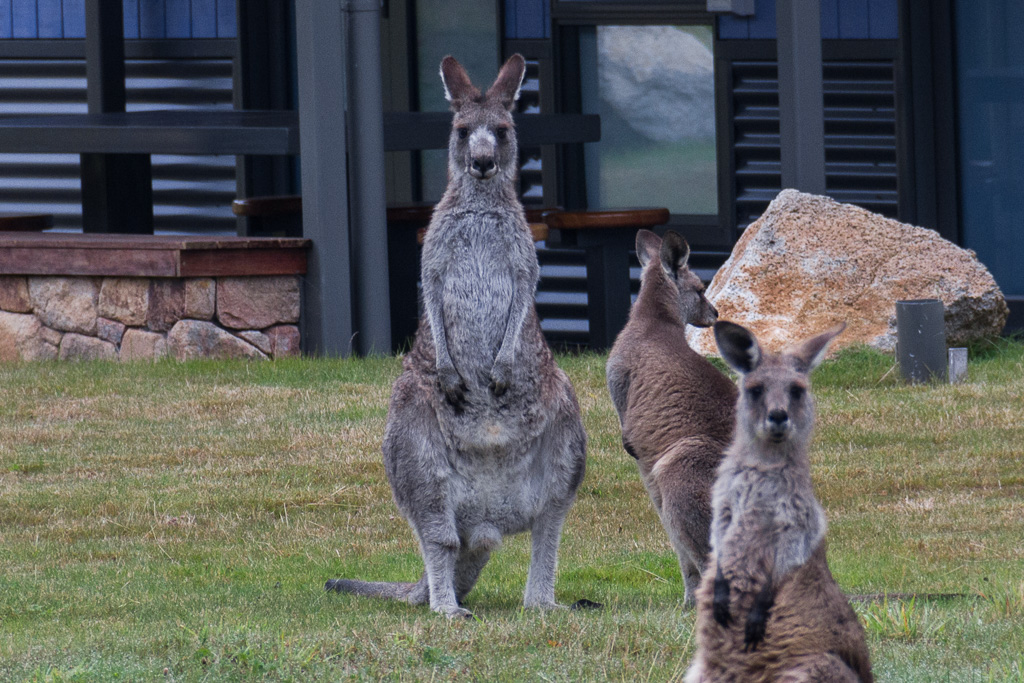 Does he have red eyebrows?

It was time to put the bikes away and head to the nearby town of Jindabyne. It was also a chance to refuel and visit the local tourist information centre to find out the road conditions of Barry Way. We knew it was unsealed, but with the amount of rain over the previous few months it was wise to check if the road was still in good condition.

Refuelling should be simple right? Putting fuel in the car was relatively normal, but when I came to pay for it, the service station bloke looked at me and said, “Nice shorts.” I looked at him and smiled saying, “Thanks mate!” when I was actually thinking, “Are you trying to pick me up or are you just a complete nutjob?” They’re a pretty standard pair of knee length dark shorts which seemed fairly nondescript, so I’m not sure what that bloke was looking at. I guess if I was wearing a pair of crotchless leather shorts then it might have been a different story. 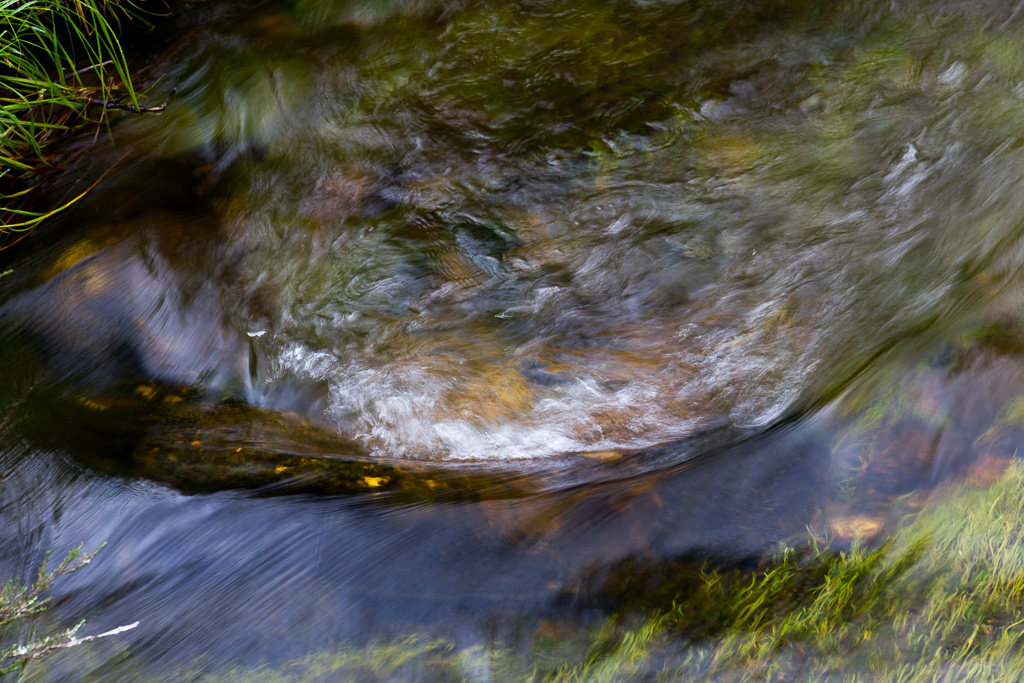 Random stream photo to break up the paragraphs

After leaving the shorts loving petrol station bloke, we then headed to the information centre and the intriguing conversations kept coming. All it took was a simple question to the lady behind the counter, “How is Barry Way? Not too bad?” I didn’t think it would result in a five minute reply that repeated the following.

“Barry Way? It’s narrow and dangerous. It has steep cliffs and sharp corners. You’ll have to be careful on those corners, otherwise you may have a head-on accident. It’s unmade and the gravel has little grip”.

Following this she said, “It’s narrow and dangerous. There are steep cliffs that you’ll have to watch out. If you go over the edge, no one will be able to find you for days”.

After catching her breath she then said, “It’s narrow and dangerous. Blind corners cause many accidents, not to mention the steep cliffs that you don’t want to drive off. If you do go over the edge you’ll be lost forever and end up having to dine out on one of your own legs to survive, but if you do, you won’t be able to walk out as you’ve eaten your leg. The best case scenario is your legless skeleton might be found in the next millennium. That’s if you’re lucky, if not your flyblown corpse will…”.

Yeah, okay, I get the picture, are you trying to scare us? The only thing she forgot to mention is watch out for rogue pterodactyls. I’ve heard of road warnings before, but she was banging on as if we were about to drive on banana peel covered Yungas Road in Bolivia wearing a blindfold and legs cross-legged on the drivers seat instead of the plain old Barry Way. 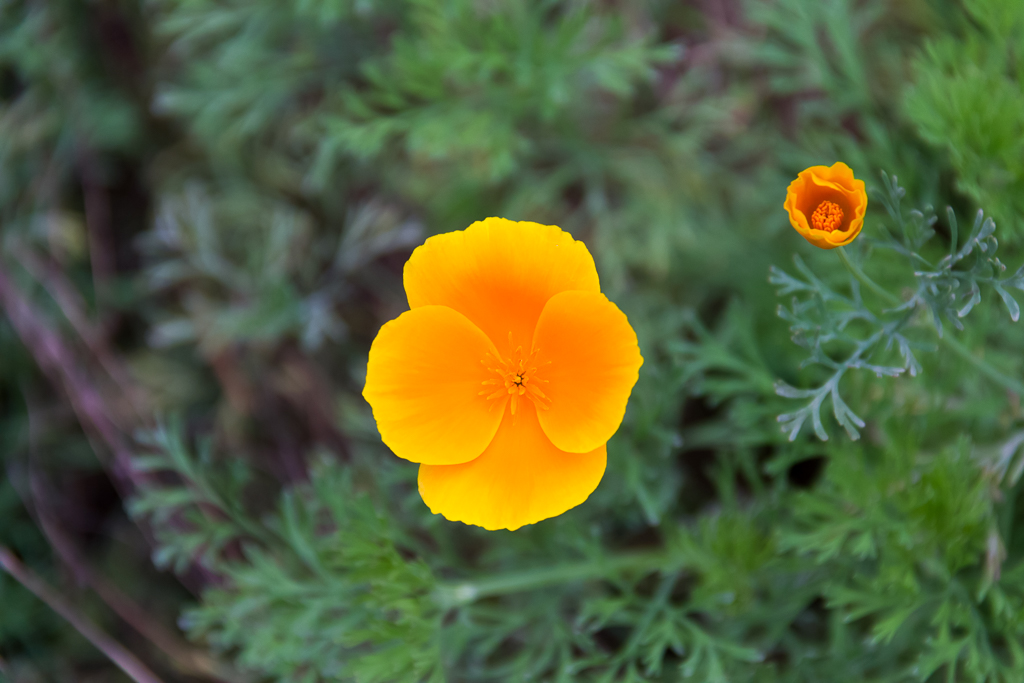 So, with white knuckles gripping the steering wheel, we ventured into the great unknown with the dulcet tones of ‘Ms Information’ in our ears and a map that was marginally better than an inflatable globe of the world. We had great maps for walking, but average ones for driving.

The car did have a GPS though, but MK persisted with the bloke speaking French, as he ‘sounded better’. I’ve no idea what that GPS bloke was on about, but at times I thought he was serenading me, when all he was doing was telling me to turn left.

What we did find was a dirt road, which was quite easy to drive on, with lovely views along the way. There are numerous camp-sites dotted along the road next to the Snowy River, so stopped at a few to have a look. It was pretty peaceful, as very few cars were on the road at the same time. They’d probably gone to the information centre themselves and as a result ended up running back to bed and hiding under the blankets in fear. 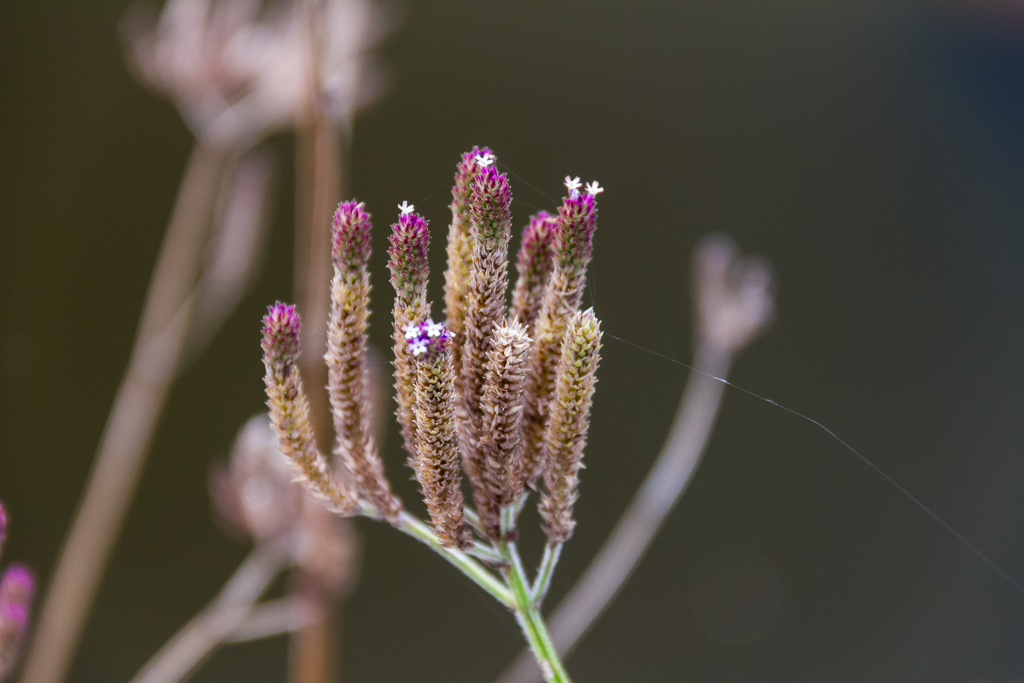 There were some nice plants for a bit of macro action and numerous yellow flowers that were very vibrant in colour. Due to their vibrant level it’s worth having another look at them. 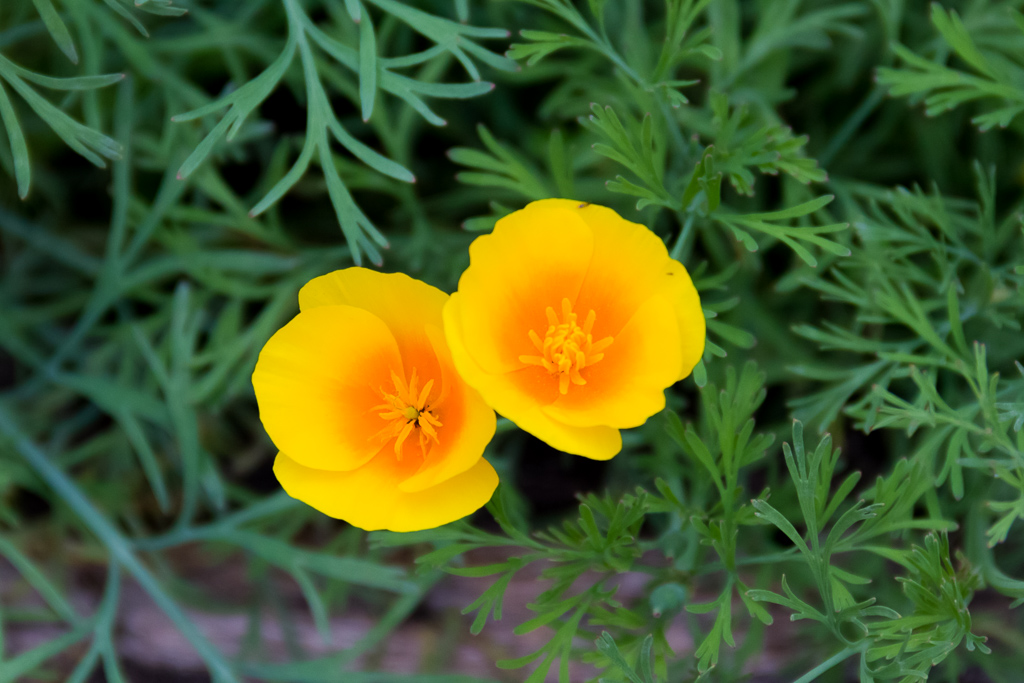 Well, the other flowers were pretty good also, so let’s have another look as I can never work out which photo to use. Instead I’m going for the whole kit and caboodle approach. 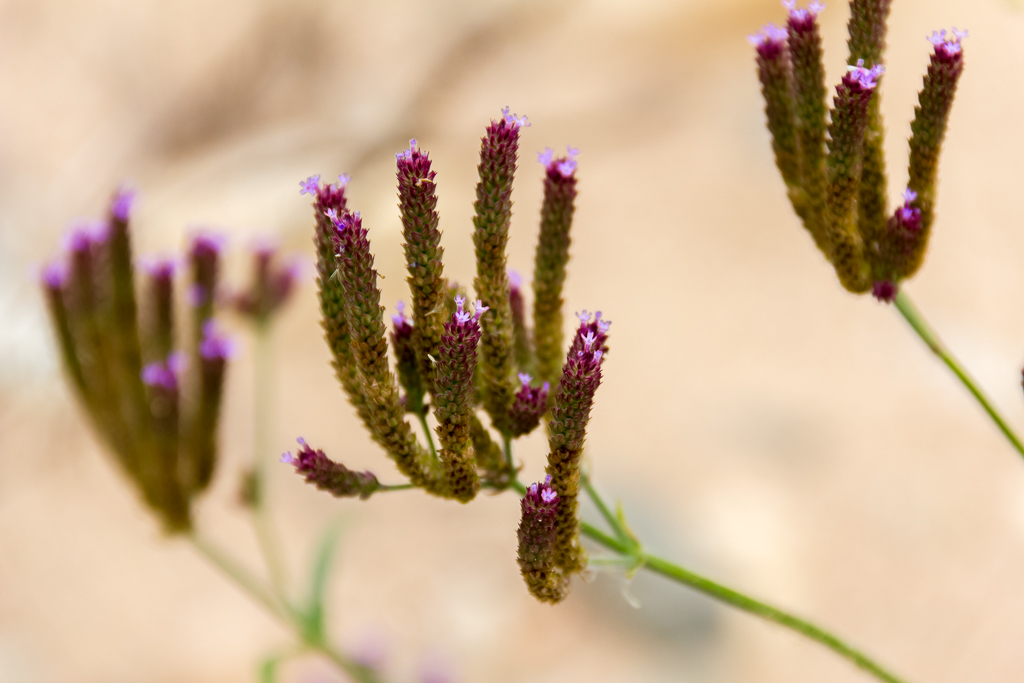 It was quite comfortable driving and I think Ms Information had overdone the fear factor a little, as we didn’t have any problems. We reached the border in good time and at the town Wulgulmerang, which consisted of not much we turned towards McKillop Bridge.

There’s a camp ground at McKillop Bridge, which we thought would be a fantastic spot to spend the night, although it meant driving on a slightly rougher road. There were a few attractions along the way though with firstly a waterfall that was quite impressive, but I’ve no idea what it’s called. I really should take some notes on the way or write up this straight after the event.

All I know is it has water that falls, which meets the criteria of a ‘waterfall’ I believe. At a guess, Little River runs through this area, so it might be called ‘Little River Falls”. With that sort of logic I should be a detective I reckon. 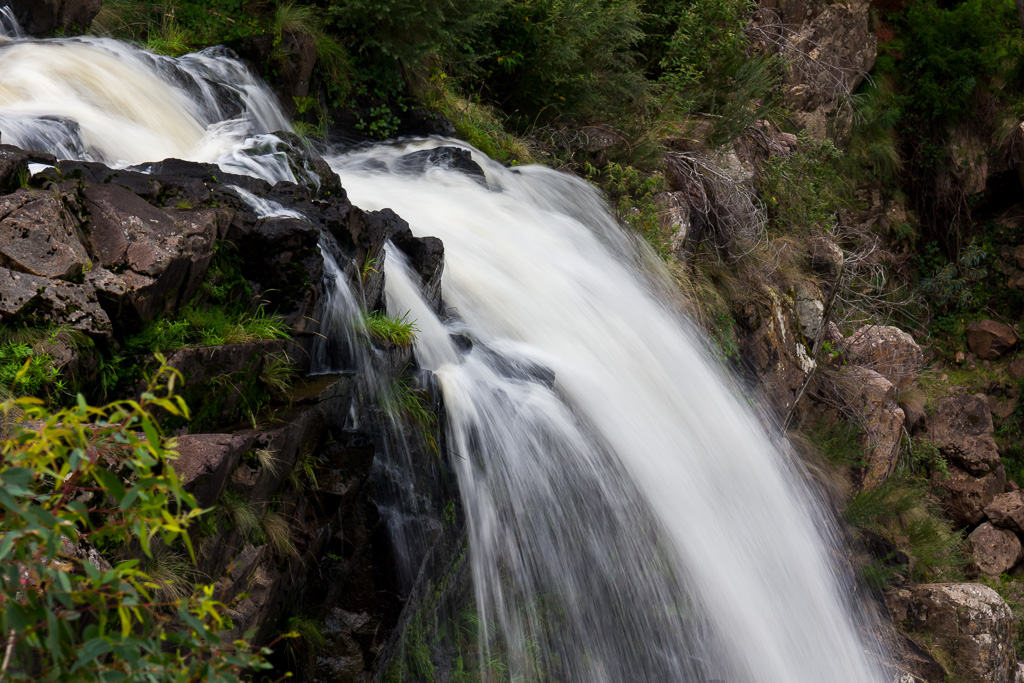 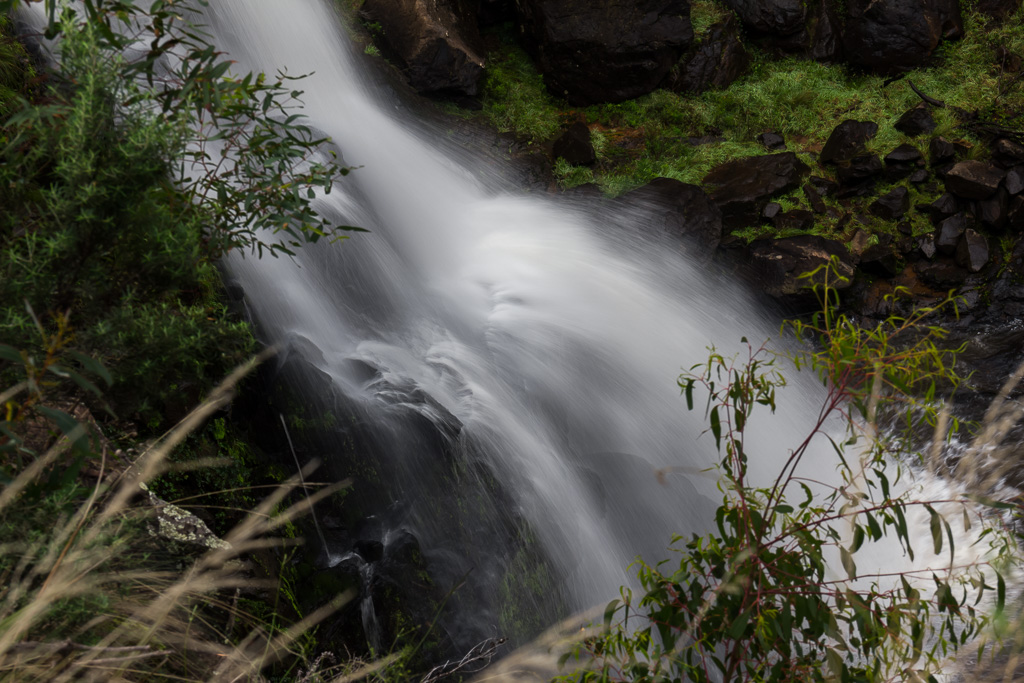 A short drive further on and there was a car park, which led to the ‘deepest gorge in Victoria’. It sounded impressive, so we trudged the 400 metres or so through bush until coming to an opening and there it was. It was a bloody big gorge that really had an unexpected ‘wow’ factor. I didn’t think it would be as impressive as it turned out to be and unfortunately no pictures taken do it justice. 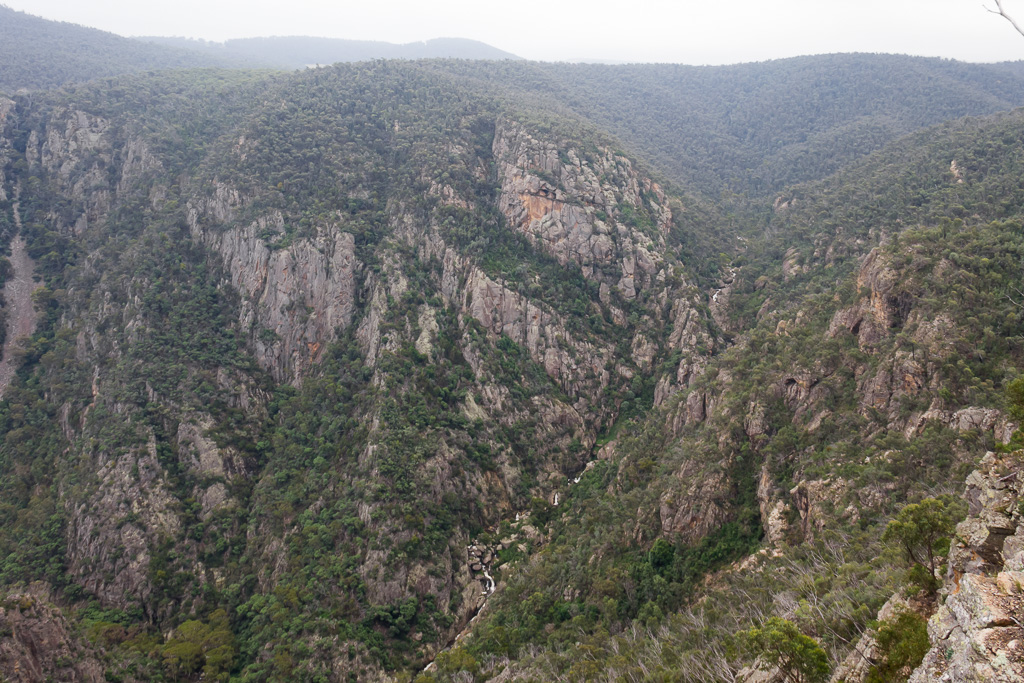 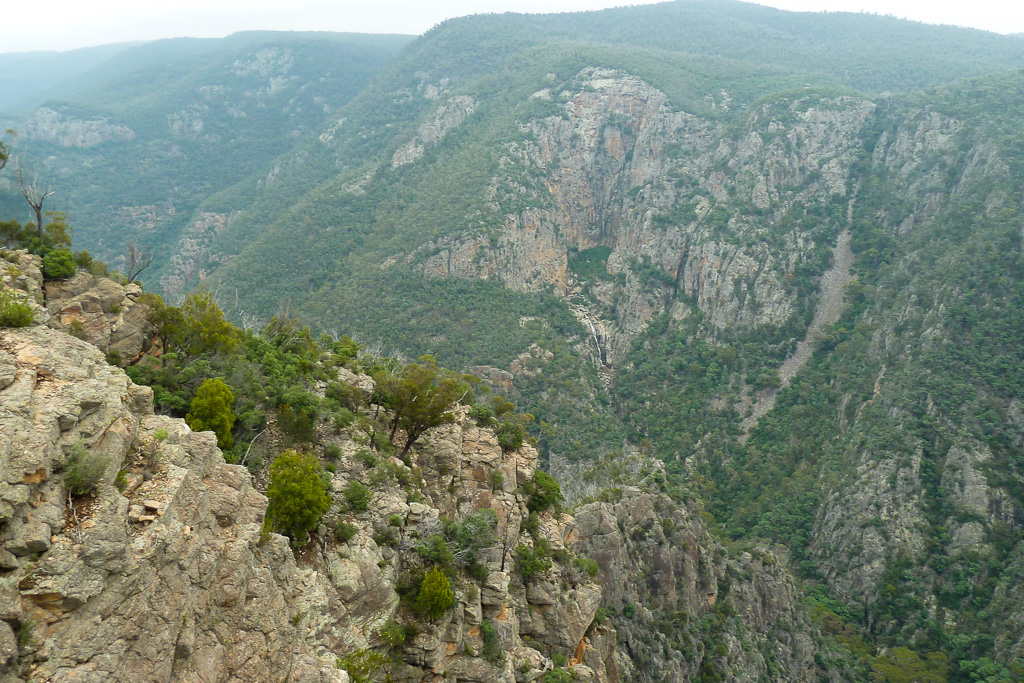 On we continued though until arriving at McKillop Bridge camping ground. It was a lot larger than what I’d imagined it would be and a little unappealing, so it we decided to continue driving all the way to Orbost, which was another 100 km further on towards the coast.

It would finish a big day of driving, but that seemed better than a night in the bush. A few hours later we arrived at Orbost in the dark with the idea of setting up in the caravan park.

Upon finding it, there was the little matter of setting up MK’s monster Taj Mahal tent in the dark, along with an inflatable mattress that needed an air compressor to inflate. The trouble is the compressor sounded like a B-52 taking off, which did cause a few lights to switch on in various surrounding caravans. With my ears ringing from the compressor it was off to bed and it was well received after quite a long day… 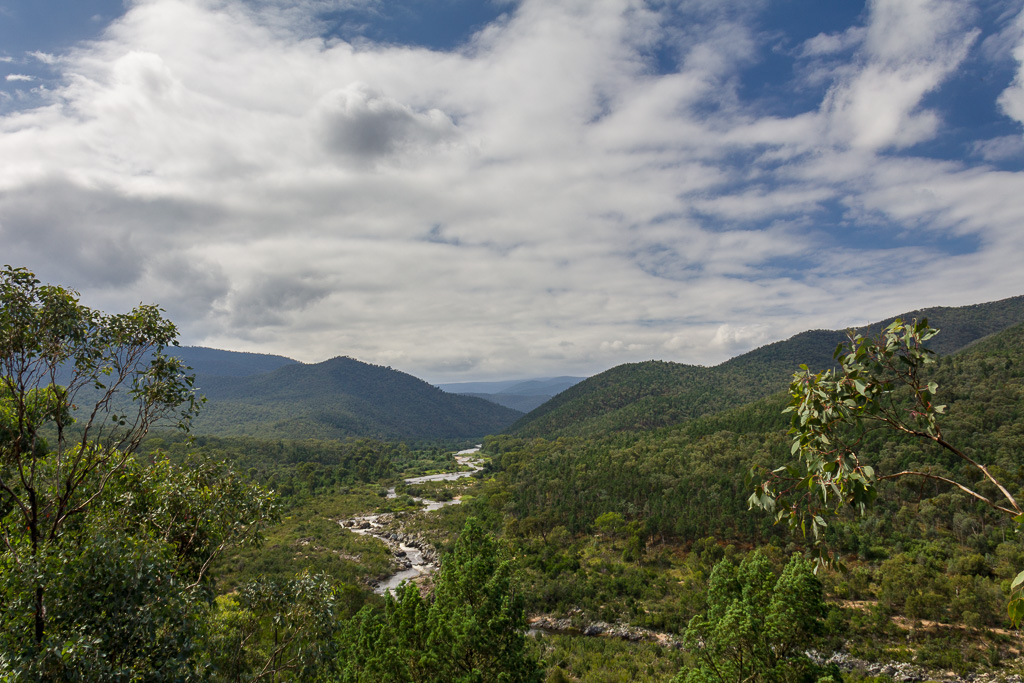