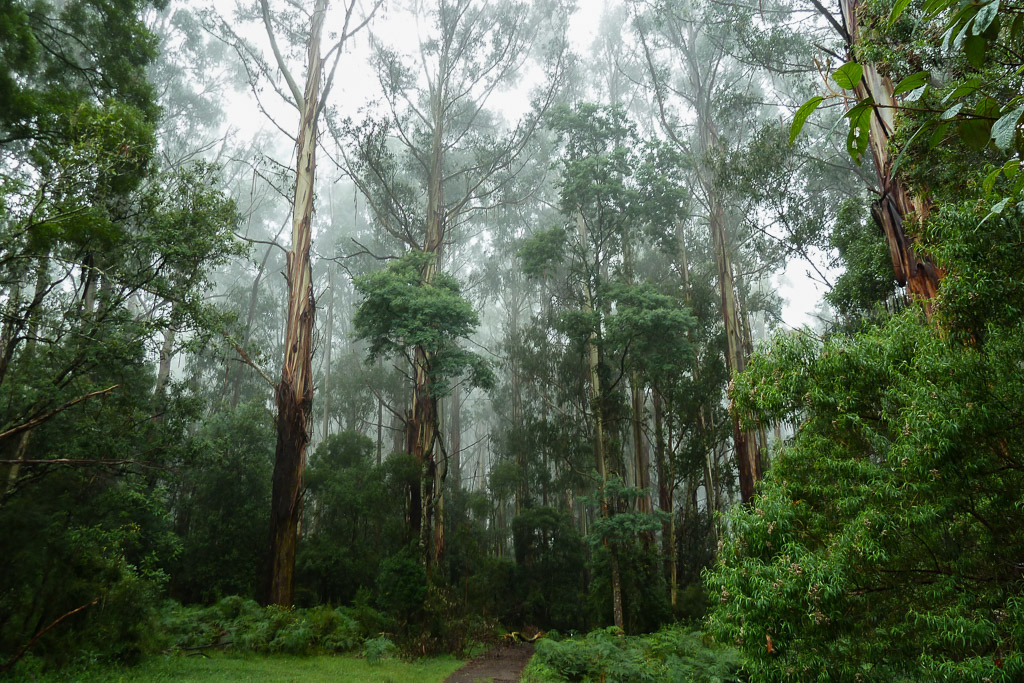 Following the previous weekends mountain extravaganza it was time to do something a lot tamer. A walk was required, but it had to meet the following criteria of ‘flat and short’. So, I consulted the standard guidebook of Glenn Tempests’, ‘Daywalks Around Melbourne’ and checked out the ‘easy’ section.

There are so many walks around Melbourne I never even knew existed, and all it took was one book to collate them all. It’s like unlocking a ‘where are the walks?’ puzzle. Whenever I pick it up, I’m actually imagining it’s the Rosetta Stone in my hand. Well, in paperback form anyway, which is lucky as the Rosetta Stone weighs 760 kg. The only way I could carry that is if I drilled some holes in it like my hiking toothbrush. I do have some good ideas, although the British Museum might complain a little.

Finally, the walk was selected and it was on the other side of Melbourne. East Sherbrooke Forest Walk, Dandenong Ranges National Park. The ferny forest is full of tracks, but I rarely get to go there. Why’s that you ask? That’s easy. Crossing from one side of Melbourne to the other is a slog, no matter what day it is.

I was looking forward to a wander though, as a week at work is more than enough to want to run off into the bush screaming and not come back. Hanging around people isn’t too bad I guess. It can provide entertainment. My current favourite is sayings, but they’re said wrong. Last week I heard, “You could get the Boy Scouts to come around and job a bob.” Now, when I heard that I pictured something pretty wild happening to Bob. Anyway, back to walking. 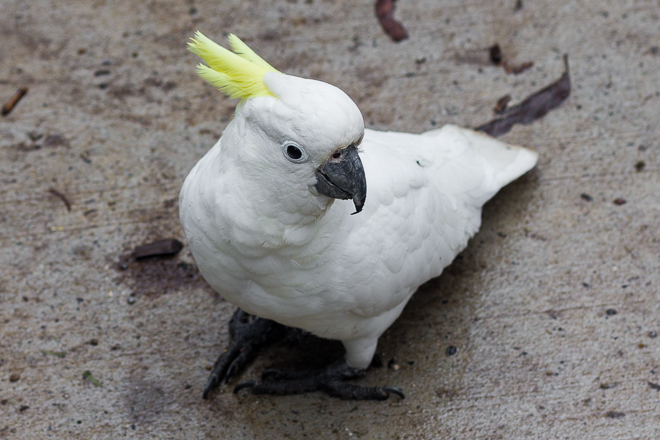 We were accompanied on this walk by Foxtrot Alpha who wanted to see how Ben and I really get hardcore out bush. The trouble is I was still sore from the mountains so I was actually shuffling like I needed a walking frame. FA was happy with the short walk though, so we were off on a grey Melbourne day.

After an eternal drive we arrived at the start of the walk at Grants Picnic Ground and were greeted by a million Cockatoos. They were everywhere around the carpark, accosting the human visitors. It was quite cool seeing them sitting on peoples shoulders and heads, although the last time that happened to me the bird started eating my ear. It wasn’t so much fun after that. 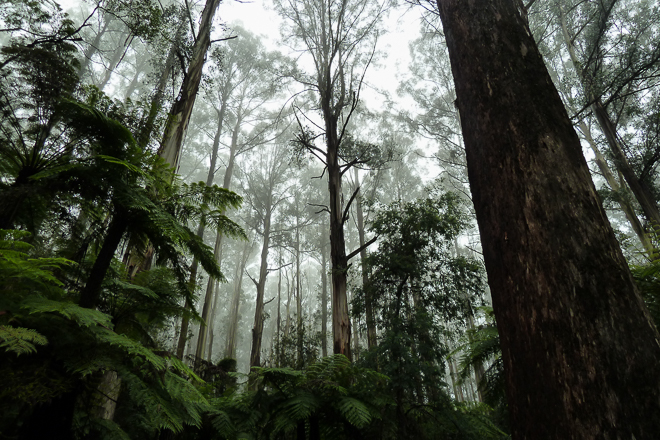 According to the Rosetta Stone we had to start at the Lyrebird Walk. It’s a great looking forest stroll with ferns lining the path, and the tall Mountain Ash trees covered in mist from the low clouds. I did have to hold off on taking photos at the start, as a couple passed us and the woman was wearing ugg boots. Having ugg boots in a picture doesn’t really give a ‘wilderness feel’ to it, plus I didn’t want my photos contaminated with such a brutal looking shoe. 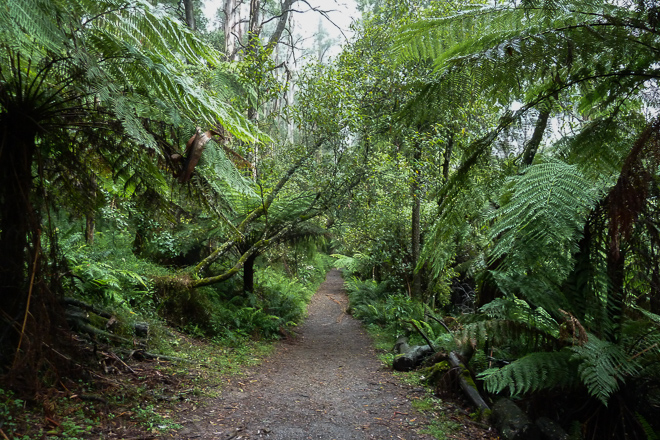 Lyrebird Walk. Not an ugg boot in sight.

It’s a pretty straightforward walk descending down in the forest and returning to the car park. I was hoping to get some photos of a stream that was listed in the book, but it was a bit of a non event. Barely any water was trickling with the path built over the top of it. What? No bridge? Blast.

Most people we came across were in jeans and runners, which made my boots and pack set-up a bit of an overkill. Don’t forget I was also carrying a PLB (Personal Locator Beacon) which also sounds over the top. Not really though, as at one point a young bloke was walking in the other direction, wearing a pair of headphones that looked as large as half a coconut on each of his ears. With the amount of pounding music leaking out of them as he passed me, I felt my pacemaker skip a beat or two. I think for moments like this that one needs a PLB. I can see the headline now. ‘Beefy blokes pacemaker pops out his gob due to earth shaking boom-box boy’. 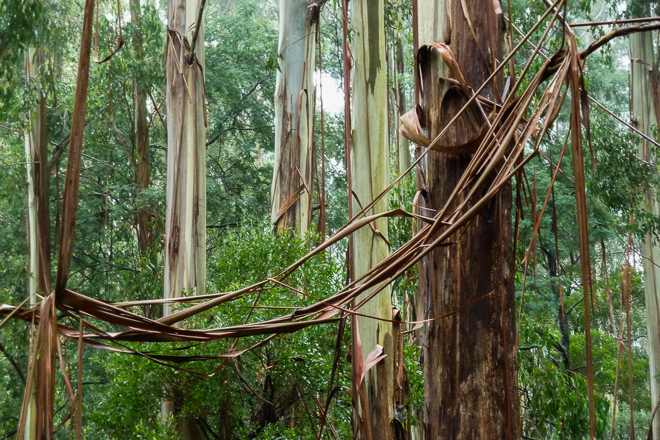 There was quite a long descent, which made me think the walking classification of ‘easy’ may be a bit dodgy. It depends on the fitness level one has I guess, but to me ‘easy’ is something that’s essentially dead-flat. Most books have only three classifications of walks. ‘Easy’, ‘moderate’ and ‘difficult’. There probably could be a few more so there’s room to manoeuvre. Stuff like, ‘feeling the pinch’ or ‘certified ball breaker’ could be added to the usual list. This walk fell into the ‘feeling the pinch’ classification. An easy track, but steady hills were included.

It was quite peaceful though and with the amount of moisture in the air the trees were dripping water. Ben was snapping a few good photos and it was decided we should have a ‘water drip on the twig’ photo stand-off. A quality twig was hanging in the middle of the path with a large water droplet on the end of it. It wasn’t physical, but I tried to psych him out my beating my chest with both fists before taking my photo. 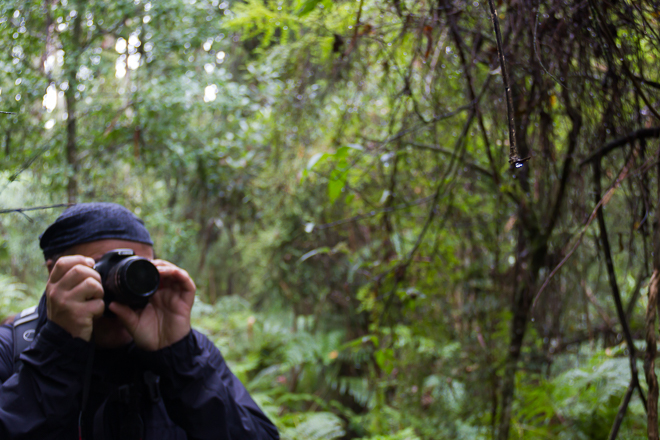 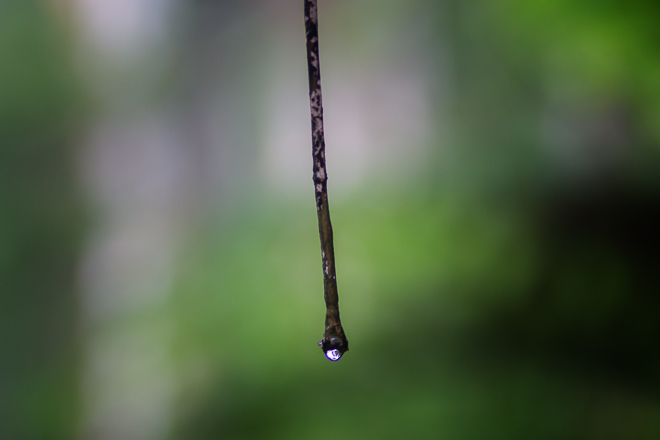 My photo, but I’m detecting a bit of blur.

I was using a lens without image stabilisation, so I already had my excuse lined up if the picture was blurry. Ben stepped up, but in his efforts to remain incognito for the purposes of the blog, I’m not sure how he even managed to see what he was doing. 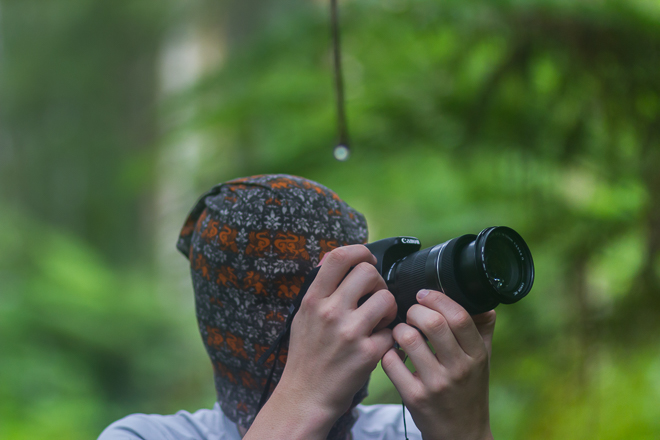 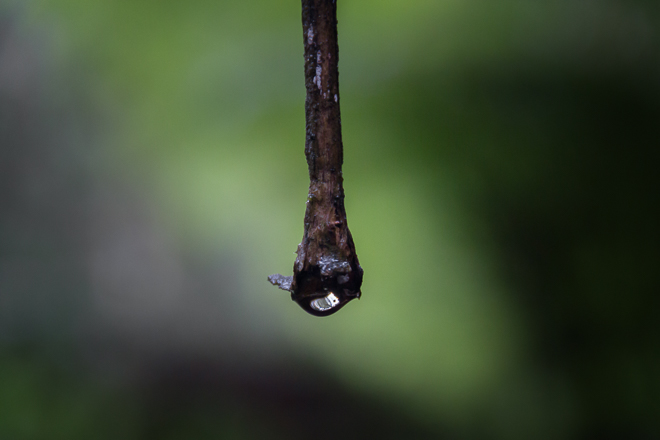 Crazed method seems to have worked, as it looks sharper.

Well, as you can see Ben was leading in the sharper photo stand-off. I was going to have another crack at it, but with the pressure building I had to intimidate him psychologically. I resorted to my usual crowd pleasing discotheque method of unbuttoning my shirt to the navel. With this plan Ben would be freaked out by full blown man-cans, but just as I started undoing the buttons the water droplet committed suicide by dripping off the twig. Damn, the show was over, but at least I kept my shirt on.

During the whole stand off, I was a little distracted by something on my forehead which turned out to be a leech. I must have got a little too close and personal to one of the over-hanging ferns on the way, as I suddenly noticed another couple of leeches on my pants not to mention another one crawling across my shoulder. I was close to putting my arms up in the air and sprinting around in circles throwing clothes off screaming, but the moment passed and I was leech free. It was now an uphill slog to head back to the car park. There were still plenty of nice forest views on the way though. 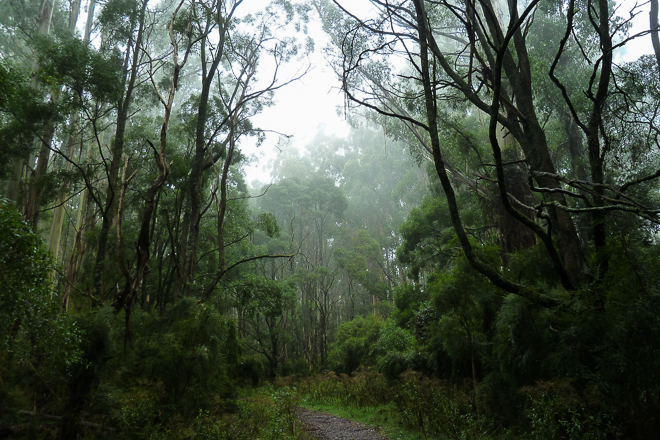 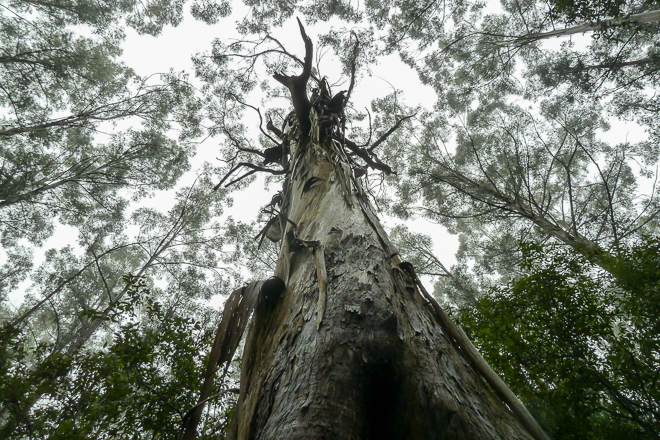 It wasn’t long before the sound of cars could be heard and we were back at the car park. Yay! Cars! Roads! I must build that hut in a remote forest one day, complete with high-speed internet of course. Spend my day in the peace and quiet, whilst wearing nothing more than a boot lace.

A quick check of the GPS put the walk at 7.36 Km long and a lazy total height gained of 208 metres. My friend the Grammar Nazi (GN) sent me some aggressive emails saying I should cross-reference the distances in ‘Ye Olde’ style measurements for my friends overseas. Well, I resisted but I might give this a go with the use of an abacus.

The walk according to the sliding beads was 4.573 291 974 9 miles long. Huh!? Where did all those other numbers come from? Oh well, the height gained was 682.414 698 16 feet. Yeah, I know. There are a lot of additional numbers attached to this as well, but I might settle for 4.5 miles and 682 feet. I can sleep easy now. We then spent some more time checking out the million squawking cockatoos flying around the car park. 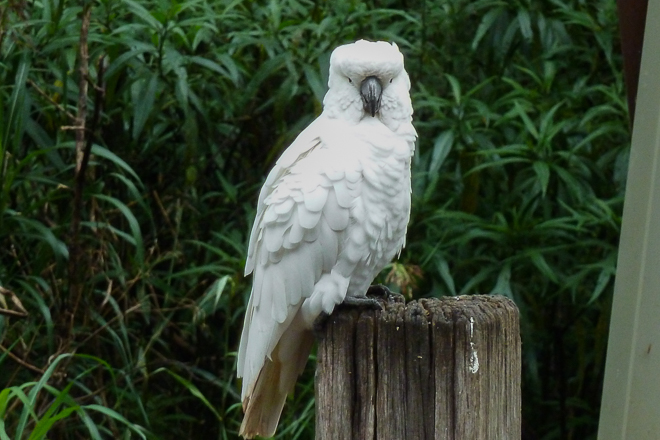 It was time to head off, but it didn’t really end there though. Whilst cruising along in the car on a dark, grey Melbourne day I thought I saw a UFO. Hovering in the distance was a flying saucer, which caused me to scream for Ben to get a photo. It would be the first picture of a UFO in the history of mankind that’s actually in focus. He was up to it and as we got closer he snapped off some nicely taken photos. I was concentrating on driving, but he yelled at me to put the foot down as the aliens were announcing they wanted our ‘ozone’. It was a close call but I managed to get away. 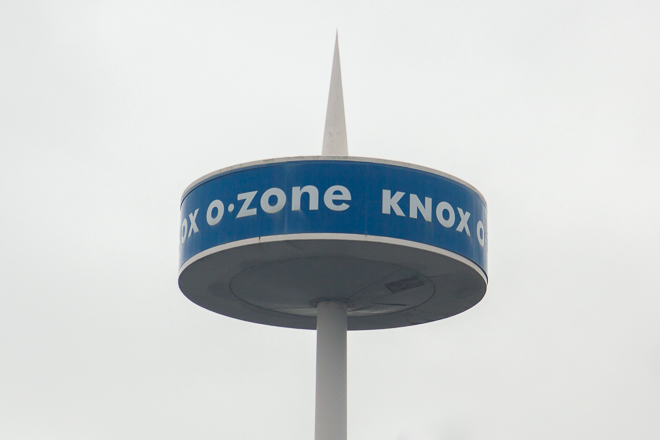 There was one more highlight and it was the result of me banging on about the tale of the first K-Mart I could ever remember in Melbourne. I was explaining how it was a rarity in Melbourne in the 1970’s. A huge shop, full of stuff you didn’t need. Ben was suspicious about the age of this particular K-Mart, until we spotted the sign as we drove past… 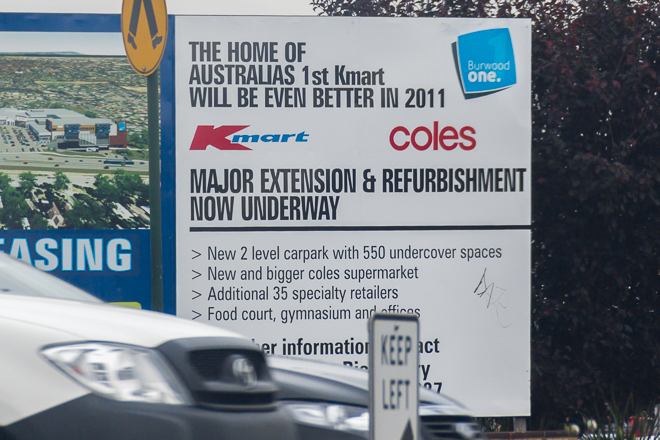 It wasn’t Melbourne’s first, it was Australia’s first! Wow, what a highlight! Amazing! I did notice whilst adding this photo that the picture Ben took is slightly out of focus compared to the flying saucer. It shows how scared he was upon sighting the sign of a suburban shopping hell that he couldn’t keep his hands steady. Fair enough as well, I’d take the ozone stealing aliens any day compared to the shops…