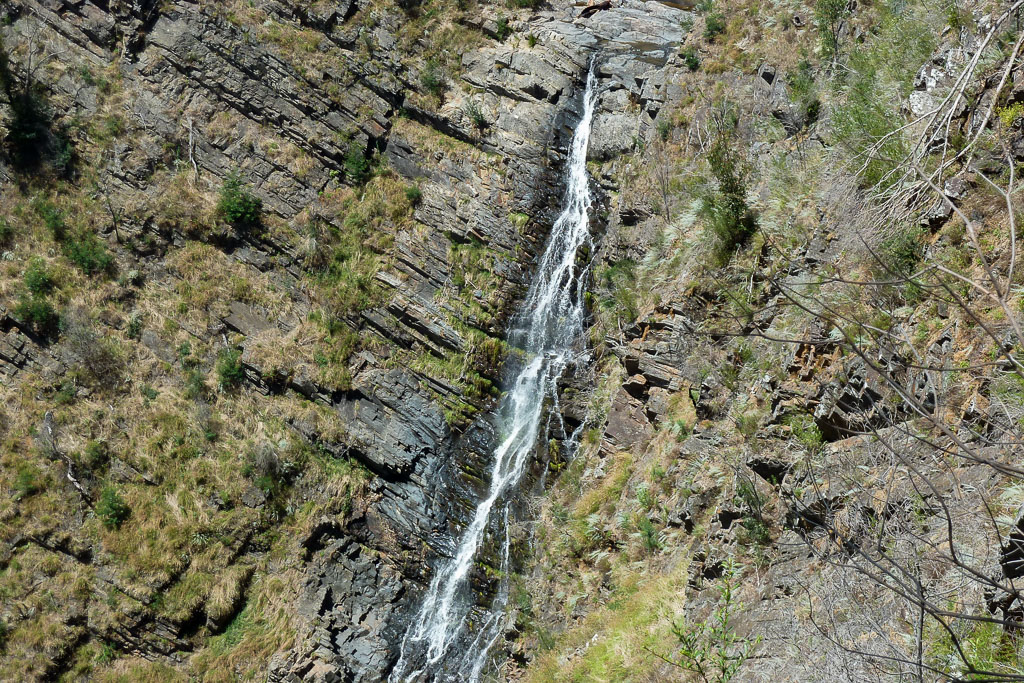 I was in two minds whether to do this walk, since in Glenn Tempest’s book, ‘Daywalks Around Melbourne’ he lists it as ‘difficult’. The Strath Creek Falls, Mt Disappointment State Forest walk is a mix of waterfalls, unmarked ridges and creeks with a few hills thrown in. The weather forecast was for about 30 °C, which is borderline too hot for me. The problem I have is I’m the world’s hottest man. Not sexy hot, but just bloody hot. Being a walking toaster is tough work in an Australian summer.

It was the weekend though, and it was the only opportunity to get out and about as the forecast for the following day was 40 °C. Ouch! The other problem is the Mt Disappointment State Forest, where the walk takes place was largely incinerated in the ‘Black Saturday’ bushfires of 2009. I’ve walked in areas that have been burned before and the regrowth can be amazing, but tends to obscure tracks that are rarely used, turning a walk into a scrub bash. Anyway, I decided to give it a go and off I went. 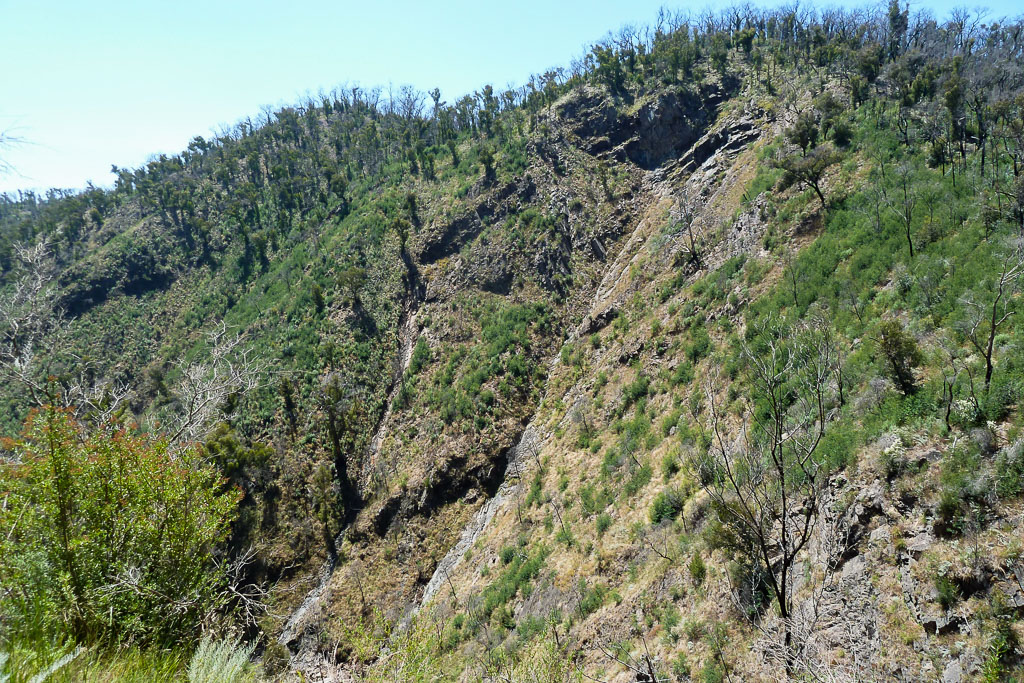 After an hour or so of driving I reached my destination, but I was a little disappointed to see the road accessing the walk was closed. I had done a bit of Google work beforehand and there was no mention this would be the case. After observing a million tyre marks around a ‘Road Closed’ barrier, I decided to do likewise.

A short distance further on I found a spot to park the car and I was off to the first sight of the day. This was a set of concrete stairs that led down to a lookout of Strath Creek Falls. There was a bit of water flowing down and the waterfall had quite a drop, but it was hard to capture as the blazing sun made photo opportunities difficult. The notes I had were telling me to walk down to the top of the waterfall, cross the creek and then climb the hill on the other side until reaching a dirt road on the top. No worries, except the ‘hill’ on the other side was steep and nasty looking. It had pain written all over it and I’m starting to think Glenn Tempest is a bit of a sadist. Nothing like the opening salvo of a walk up a mega-steep hill to blow the legs early. 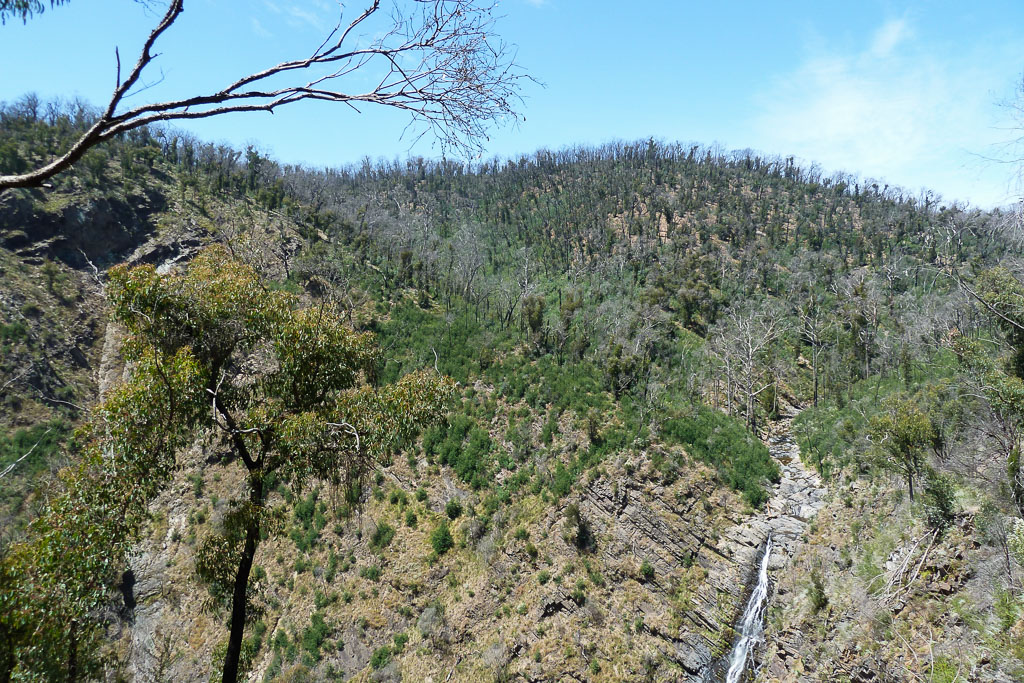 I got to the end of the path and now it was time to go cross-country. Climbing a fence, which I assume is placed for people’s safety and then stumbled down a steep, rocky creek. I took it very easy as some rocks were wet, but I made it to the top of the waterfalls in one piece. That was a bonus and now I was to look for a “…fairly good path ascends the steep open ridge…”

Mm… Okay, but I couldn’t see anything, other than trees. Regrowth was popular and any old path was long swallowed up. I decided to track upstream on Strath Creek and then go for the ‘straight up’ approach. A real cutting edge theory. 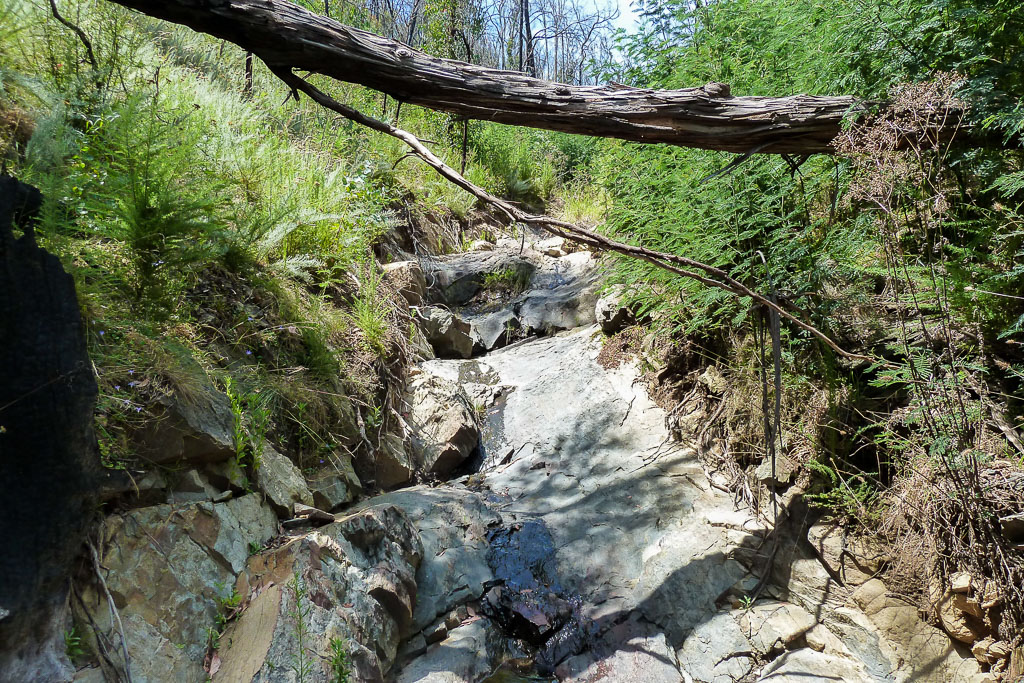 The creek was all about scrambling up rocks and I wasn’t too comfortable. It was hot and there wasn’t a breath of wind in the gorge, as I started to climb straight up the steep ridge. Actually, it was quite hideous, as I had no real idea of the way other than up. I certainly didn’t see any path and bashing through scrub whilst bouncing off burnt trees was not ideal. With the sweat and charcoal from the trees I was filthy pretty quickly. 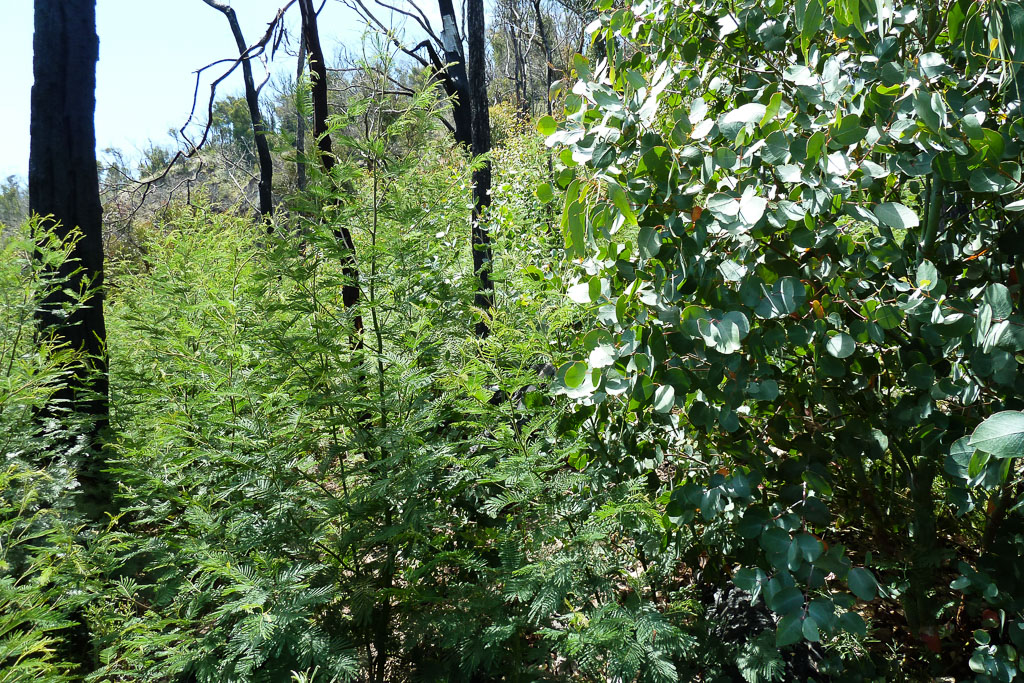 Pushing through the regrowth

I was cursing a fair bit, but glad I’d brought my walking sticks. It was so steep the sticks were handy in helping me climb, otherwise I’d still be stuck there, slipping and sliding. It took forever and my legs were like jelly when I finally broke out of the scrub and reached the road on top of the hill. Somehow I ended up coming out at the point where a small cairn is placed. This is the spot where I was meant to be, which was a slight miracle considering I had no idea where I was on the way up! 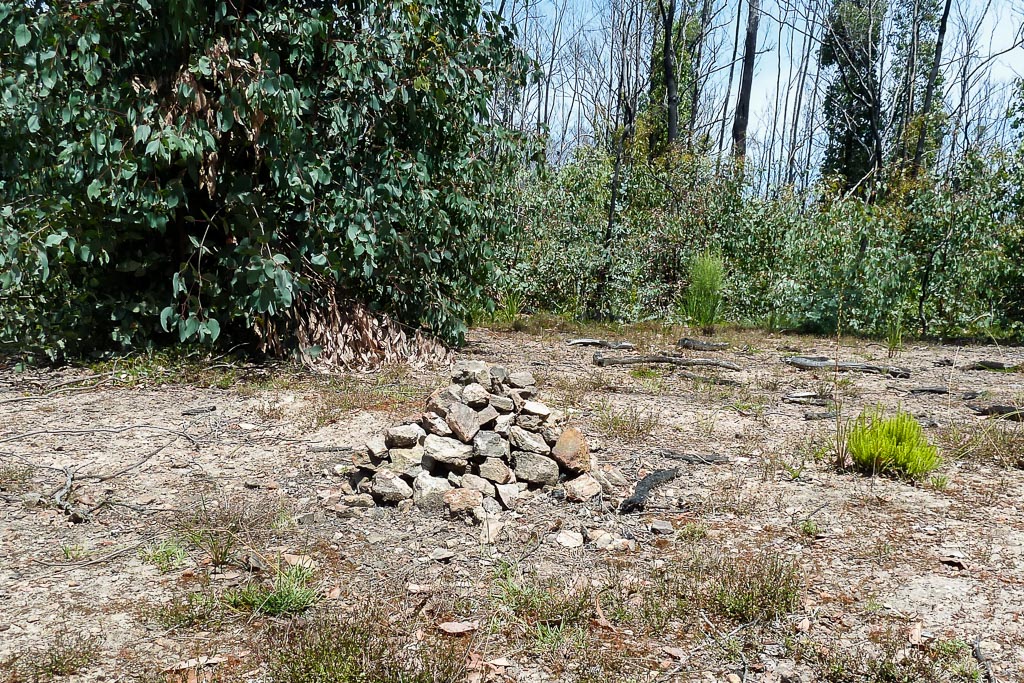 I was sweating like a wild animal so I flopped onto the ground in the shade to reduce my ticker speed, as it felt like it was about to pop out of my chest. The path ahead was on dirt roads, so it was going to be easy going for the time being. I was to stick to this for a few kilometres, and then look for a track which was going to take me cross country again in order to reach another waterfall.

It wasn’t getting any cooler and the steep climb at the start had sapped my mojo, as my thighs felt like a half-set jelly. Some of the roads weren’t signposted so I had to stay attentive, but I ended up heading in the right direction along Diggers Gully Road. At one point I came across a large hole in the road, which I assumed was from the torrential rain a few weeks back. It was surprisingly difficult to cross as it was quite deep, and my method meant that when I got to the other side I was left lying on my chest. Very athletic. 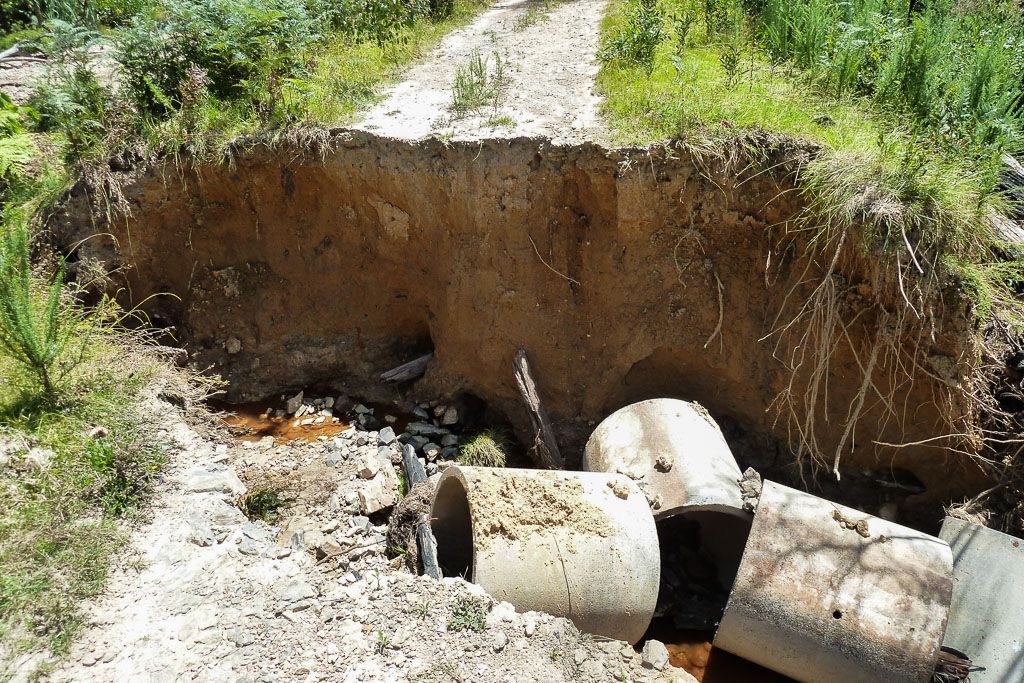 It’s deeper than it looks!

Plodding on, my notes were quite specific I should look for an old vehicle track at the four kilometre mark. Well, at four kilometres I did find an old track and it was great for the first few hundred metres and then vanished into regrowth. I the reached a spot where I was standing in bush that completely obscured my view and what lay ahead completely drained my mojo.

Being annoyingly hot wasn’t helping, so I decided to call it quits. Certainly, I didn’t feel any great enjoyment about an upcoming bush bash. Not to mention the business about walking on a hot day. Making sure it was burned into my memory, so I wouldn’t do it again. I might come back to this walk in the cooler months. Maybe. 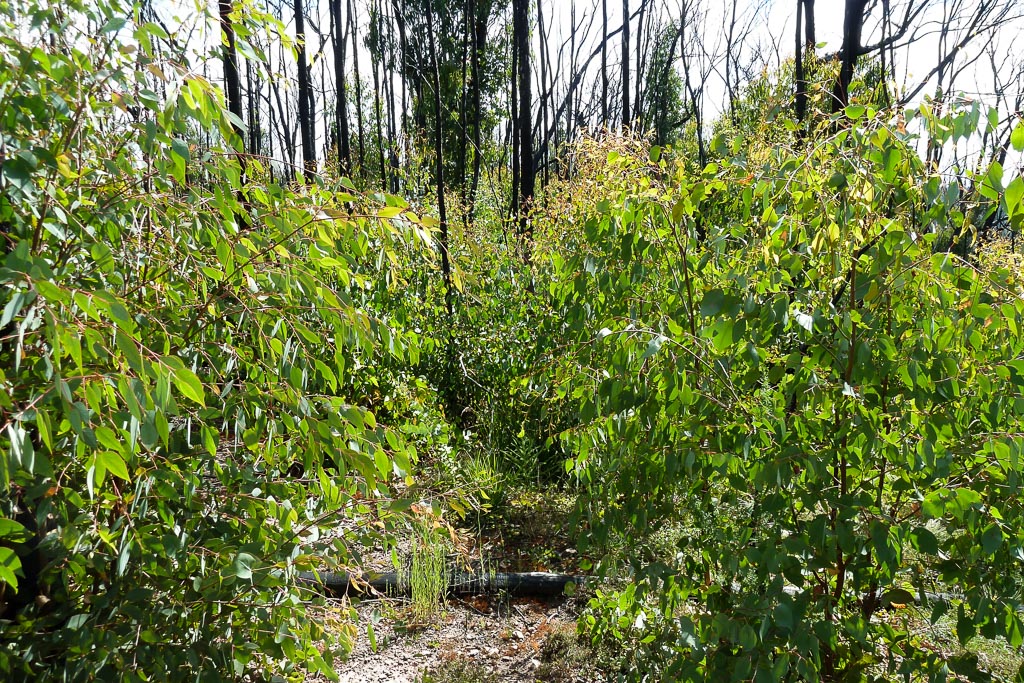 As I turned around to walk back, it was just a matter of retracing my steps, whilst letting my mind wander about what drink I wanted the most at that moment. A Coke or a Gatorade? I think I settled on a Gatorade, but only if it’s a blue one. I love the natural colour of a blue drink.

I was ambling along and unfortunately had to re-cross the hole in the road. I went for a different approach and ended up climbing up a burnt log to the other side. This was quite successful, but when I got going again I realised I’d lost the lens cap to my camera. For 0.3 of a second I considered backtracking to look for it, but in the end resigned myself to spending $5 to get a replacement instead. 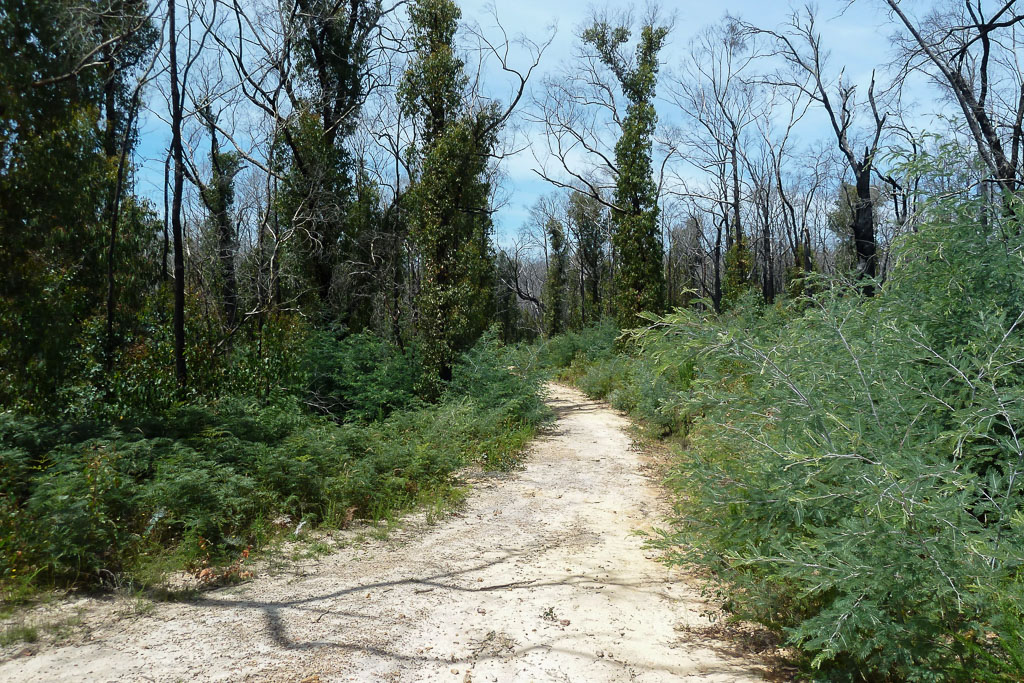 I really began to wimp it, as I considered walking on roads all the way back to the car. It was either that or go back the way I came, which meant going down the steep hill at the start. I was in two minds until I reached the rock cairn and my GPS indicated I was only 600 metres from the car. Yeah, well, it was 600 metres straight down and then up again, but it certainly didn’t sound too bad.

Electing to go downhill, I had to make sure I kept well left of the Strath Creek Falls, as I didn’t want to walk out of trees and plummet down a vertical drop. With the vegetation obscuring the view I was quite pedantic in following the same direction I’d struggled up earlier. 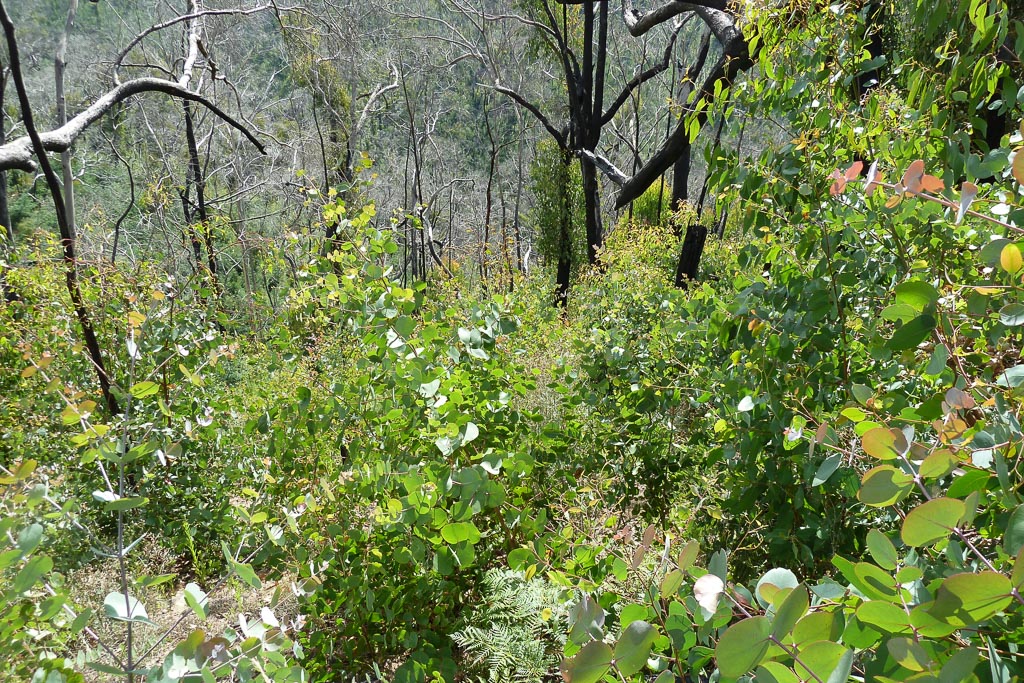 Enjoying the views on the way down 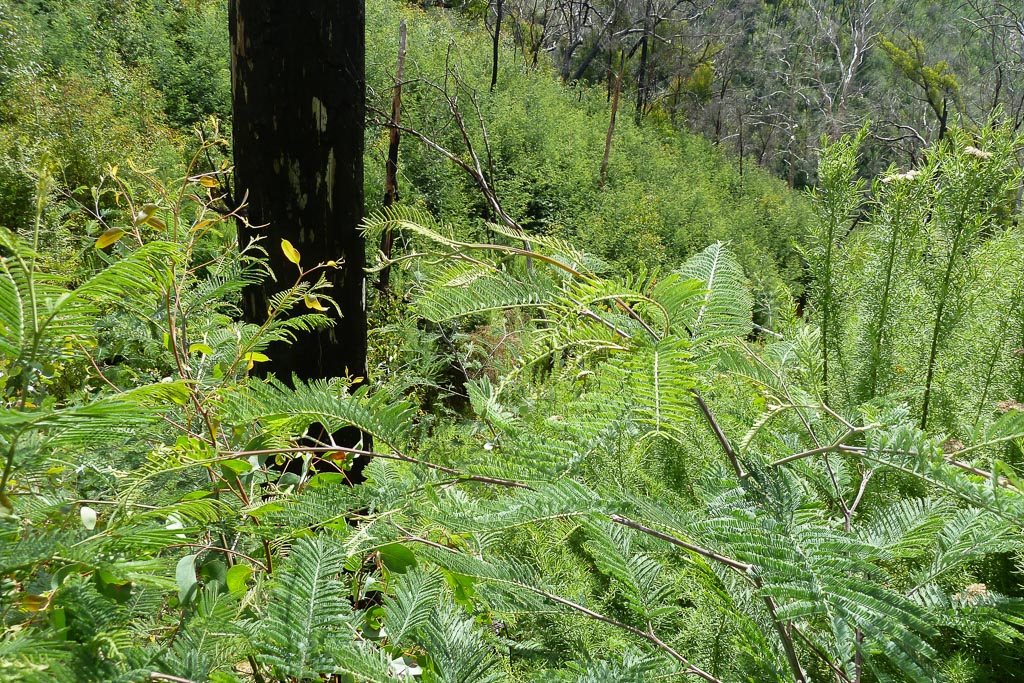 I slowly inched down until I came to the creek bed. I was feeling pretty sore, so I stopped and lay on the rocks of the creek to veg out for a while. As I did so, I was suddenly surprised to see a couple a short distance away in one of the creek rock pools. They didn’t see me and they couldn’t have imagined anyone else would be there, so I was really hoping they had clothes on. This joint had ‘skinny-dip’ written all over it and it would be another nudist-walk-sighting if that was the case. 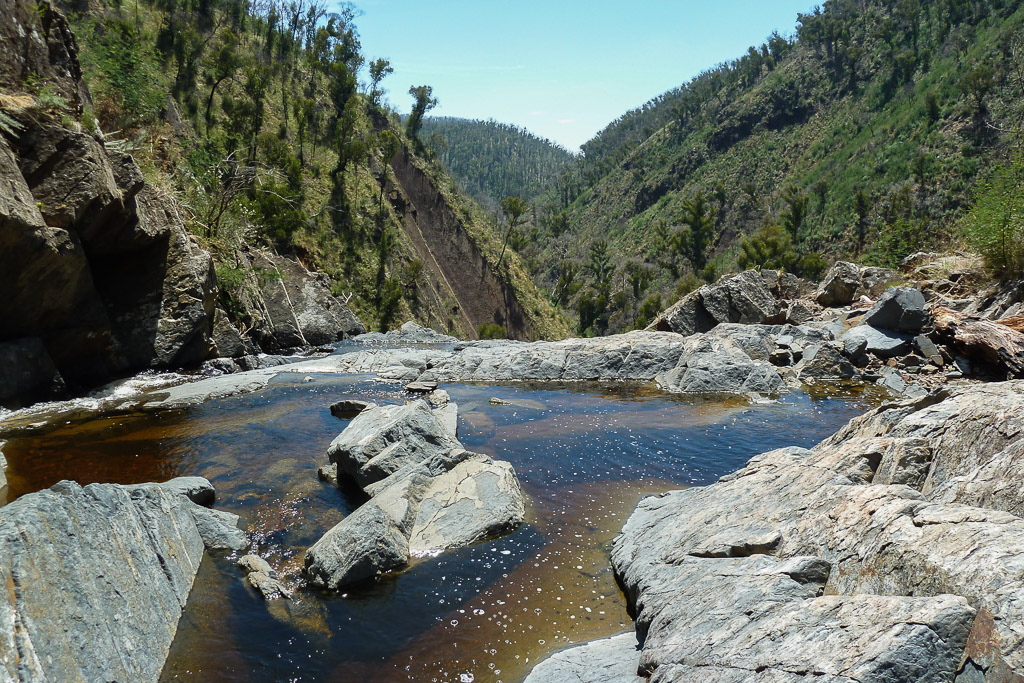 The top of Strath Creek Falls

After lying on the rocks for a half hour, I decided to head up and out of the creek. I passed the couple in the rock pool and was impressed they had clothes on. It was still pretty hot, so if I was in the same situation I’d have ditched mine. I’m not sure what they thought when they saw me. I guess they were amazed at my face being the cross between a tomato and a beetroot in colour.

Anyway, I had to climb up the rocks to reach the fence that stops anyone coming down to the spot I was standing in. It was a little awkward as my energy was sapped. With a bit of grunting like a Neanderthal, I struggled to the fence. 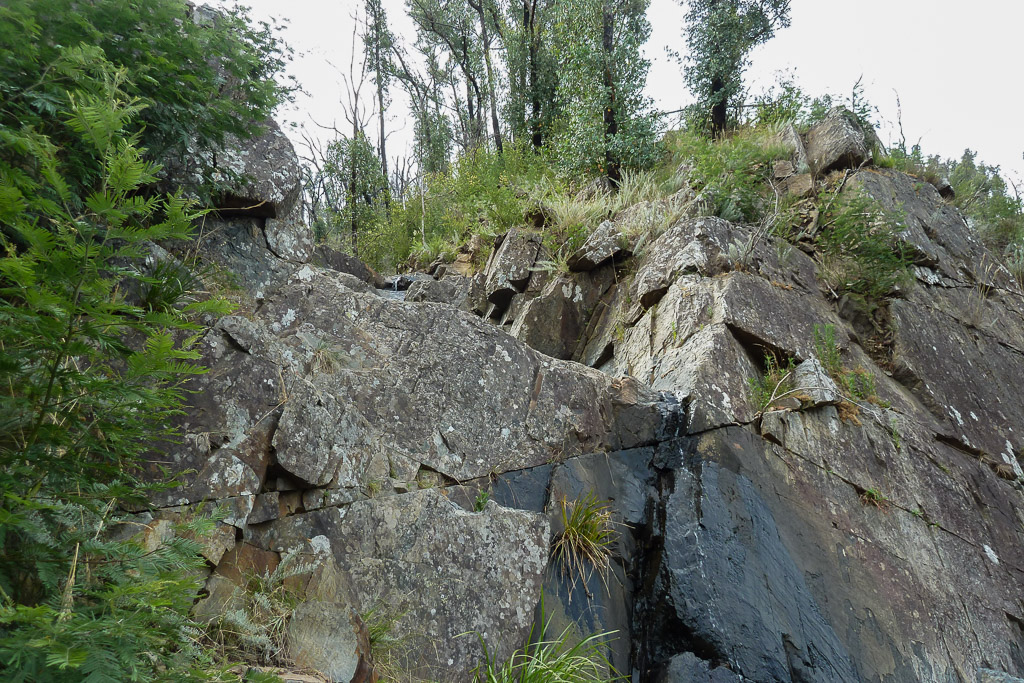 I was pretty sluggish the rest of the way, as I climbed the concrete steps to get out of there. I paused a few times to take more photos of the gorge that Strath Creek runs through. It’s pretty rugged country. 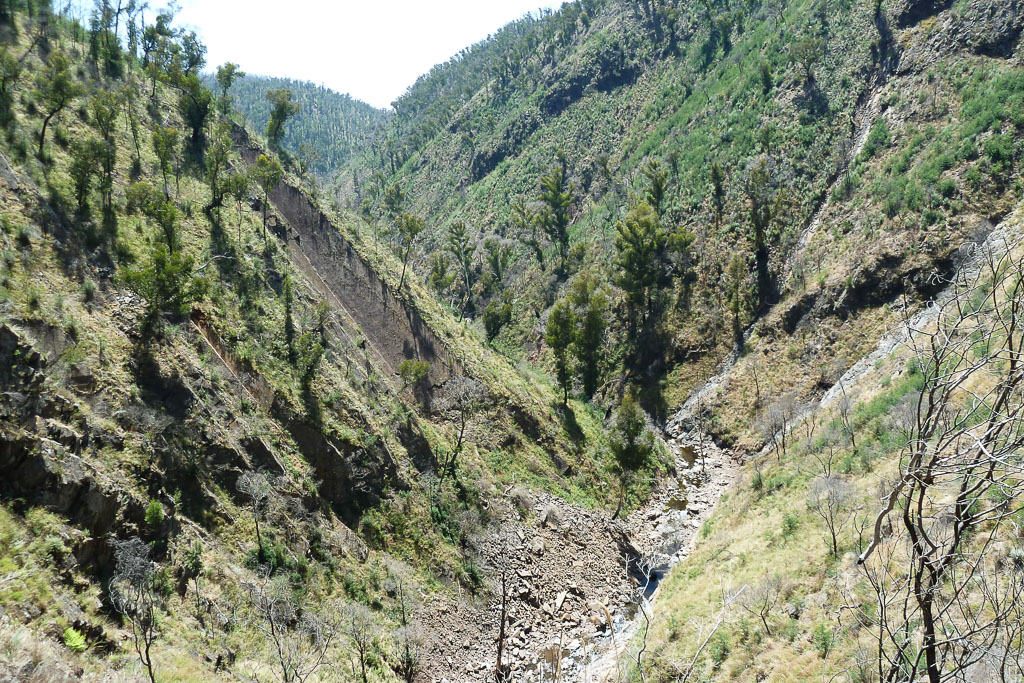 I was so glad to make it to the car. I always carry more water in the car for moments like this. It was a bonus being able to pour half a litre over my head. I was going to take a self portrait, but I became scared when I looked at my reflection in the rear vision mirror. It looked like I had been beaten around the head with a large rubber mallet. At least I now had air conditioning, so on it went and I was off.

The distance walked for the day was a pretty small 8.82 km, with elevation climbed of 377 metres. The trouble is the metres climbed were of the ‘straight up’ variety rather than a casual incline. I’m not sure what to make of the walk, but if it was cooler I may have persevered with it. As it was, I’m placing this in the ‘fiasco bucket’ and I certainly got my money’s worth taking the ‘short cut’ at the end. I may have to revise my walk schedule and go for easier walks during the summer months. I’ll consult my trusty books this week. It’s tough being a toaster…

NB 24/02/2013 – Just a bit of an update to this post. Do you realise I’ve gone back to this walk multiple times and still not achieved it according to the trip notes?! Yeah, yeah, pretty pathetic, but one day I’ll slog through the bush and knock it off. The other attempts are on the blog, but sometimes they’re a bit hard to find. Here’s the links for all of the failures since.

3rd attempt, November 2011. Not even Winston Churchill could help get it done.

Is there a fourth? Who knows, but more than likely at some stage I’ll try again…