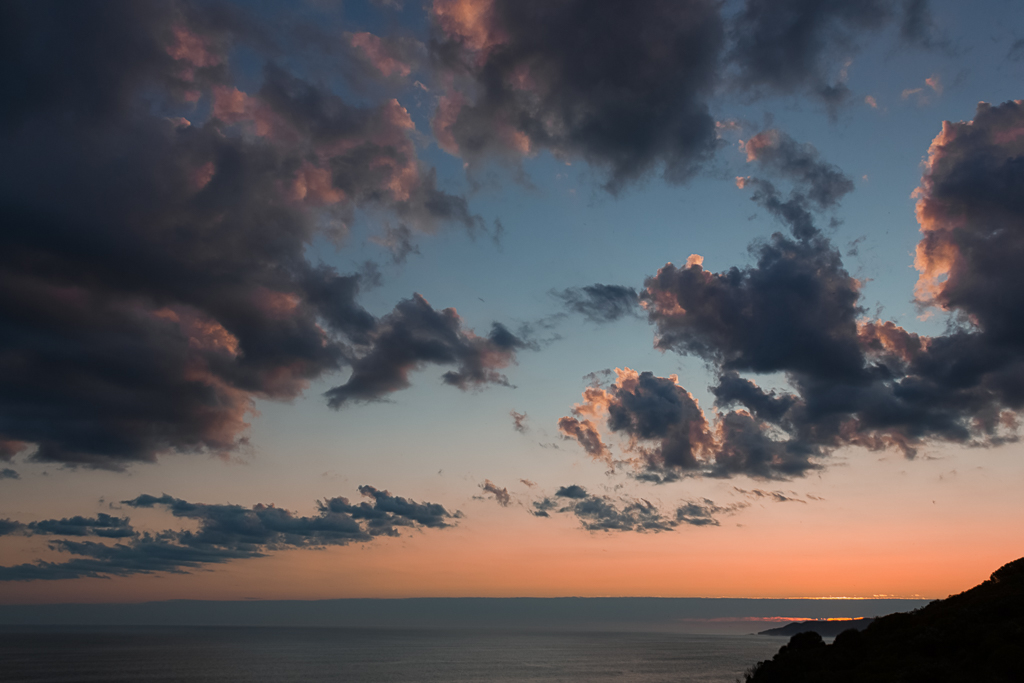 The night spent at Aire River Campsite was almost trouble free. Considering my sleeping mat had failed on the first night and then subsequently my plush pillow, it was a reasonable sleep. I was starting to think my body was getting used to lying on the ground without any support. I think.

There was one drama though. I’d gone to bed early with the iPod and in the morning, I was packing it up when I noticed the headphone bud was showing a bit of wire. Mm…what does that mean? Looking closely, I was alarmed to see the headphone had separated from its protective sheath of wire and was swinging in the breeze. I cursed myself for not bring an oxyacetylene kit.

One test confirmed what I thought. No music from the headphone! Feeling slightly peeved, I considered whether to listen with just the one headphone. As I pondered this, the entire iPod locked itself and I couldn’t unlock it. Now it was a case of no late night music and daytime dead weight when I’d be carrying it. How many more things could break in one hike? The headphones must have got snagged when I was sleeping and my overly beefy frame stretched them to the limit.

I packed up and sat in the kitchen shelter eating breakfast. The hike-in site has a number of signs, advising car campers not to use the water tank provided for walkers. These signs don’t discourage it happening though.

As I sat there munching away, a steady stream of people arrived, filling up bottles and containers. I was going to say something, but it wasn’t one or two people. It appeared the entire car camping site was making a beeline for the water tank. I stood clear, otherwise I would have got run over. I guess this water-taking wasn’t too bad in spring, but I bet in the warmer months it could be a problem for the hikers.

It was a clear and sunny day, which was perfect for this leg. Aire River to Johanna Beach, Great Ocean Walk is one of the weeks highlights. Hugging the coastline all day it was one of my favourites. Anyway, as I was ready to get going, suddenly about 20 kids came ambling along the track and they just happened to be heading in my direction. I managed to snag an adult and found out they were going to Johanna Beach, but weren’t going to stay the night. Phew! I don’t mind other people walking and I knew I wasn’t in a wilderness area, but big groups can be a little painful.

In order for them to get well ahead, I decided to wait for 10 to 15 minutes, before getting underway. I thought it was a good plan, so I was a little surprised when I caught up to some stragglers after only 36 seconds of walking. I’m not sure how this happened, unless they were moon-walking instead. One kid appeared to be barely moving, whilst wearing a pack that was easily 3/4 his body size. He had an adult with him which was good, as I didn’t feel like playing the elder.

It reminded me of Gurkha’s I did an exercise with in the army. They were tiny, yet carried packs that appeared to be the size of small cars on their backs. The difference is, they could power through any terrain with barely a bead of sweat on their brow. How do they do that?

Anyway, this kid appeared to be dying and with about another 12 km to go, I could imagine the adults having to carry his corpse to Johanna Beach. If he magically survived, he’d probably be so mentally scarred he would never hike again for the rest of his life. It reminded me of ‘Bomber’ Harris. He apparently said the pain he endured in his army days was so burnt into his brain, that he vowed never to walk again unless he had to.

Okay, the history lesson is over. I thought the best approach was to turn on the power and put some distance into the dying children. I did this and came across the majority sitting on the track about 27 seconds later. The only thing I really heard, as I ripped past them leaving a cloud of dust and tumbleweeds in my wake was, “Hey, I need some poles like those!” The shiny new Black Diamond walking poles did seem to be a winner. Whether it was a placebo-pole-effect, but I was noticing less pain in my joints.

Now I was on my own and walking the steady undulations towards Castle Cove. There were spectacular views on such a clear day, with the coast stretching out ahead and large cliffs looming by my side. 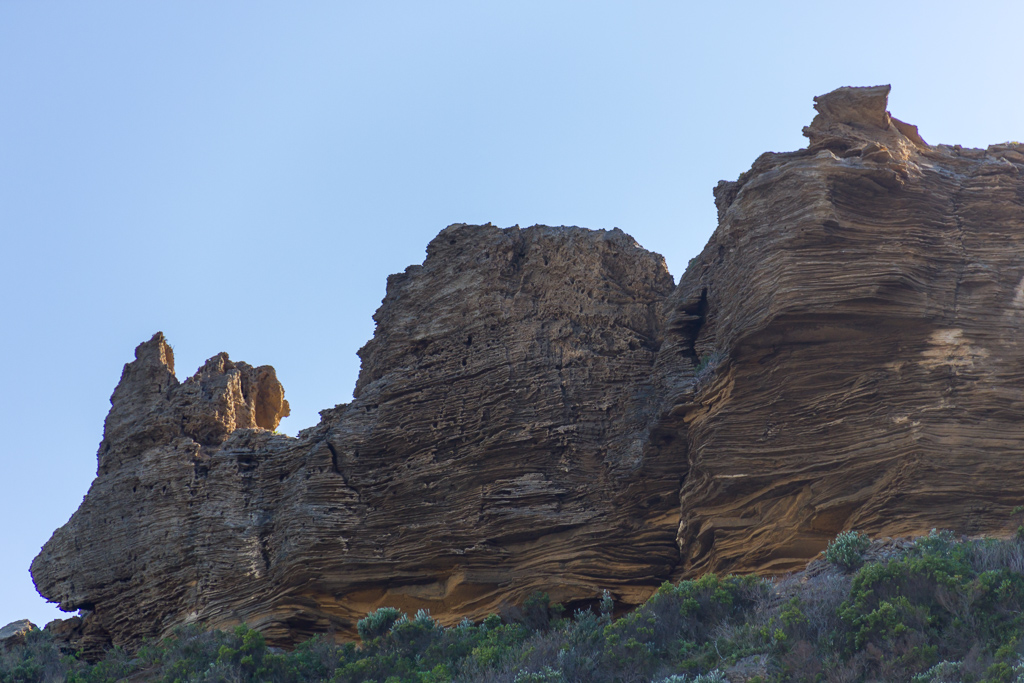 A decent swell was bringing in the surf, and an off-shore breeze was causing the breaking waves to leave large rooster tails of spray as they broke. 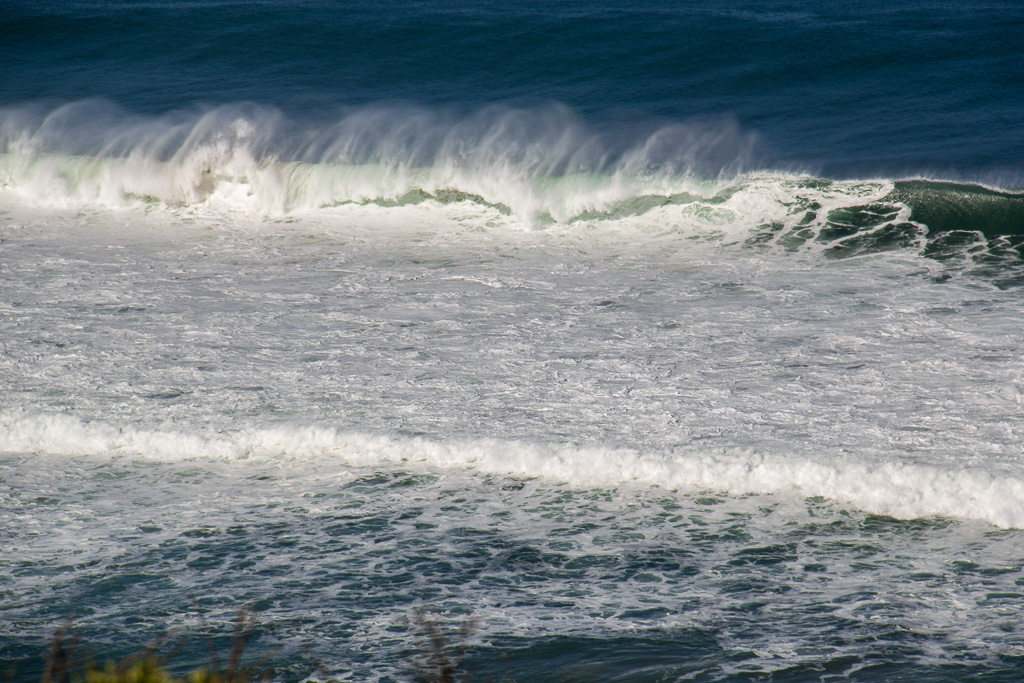 Castle Cove is the only spot where the Great Ocean Road, actually meets the Great Ocean Walk and I planned to stop there for a break. I’d made pretty good time, as I made the short climb up to the road and paused to inhale a muesli bar.

A number of Japanese tourists stopped by, taking photos at the lookout. I hung around for about 20 minutes, before deciding to move on. As I did so, one Japanese bloke saw me heading his way and as I got nearer to him, he suddenly dropped onto his haunches and started firing off pics of me as I approached. I imagined he was thinking, “Wow, big Aussie bush-walker!” but it easily could have been, “Wow, I’ve never seen such a fat bastard walking!” He smiled and I smiled back before leaving him behind.

This is a really a good leg of the hike, as the walk hugs the coastline the entire time. 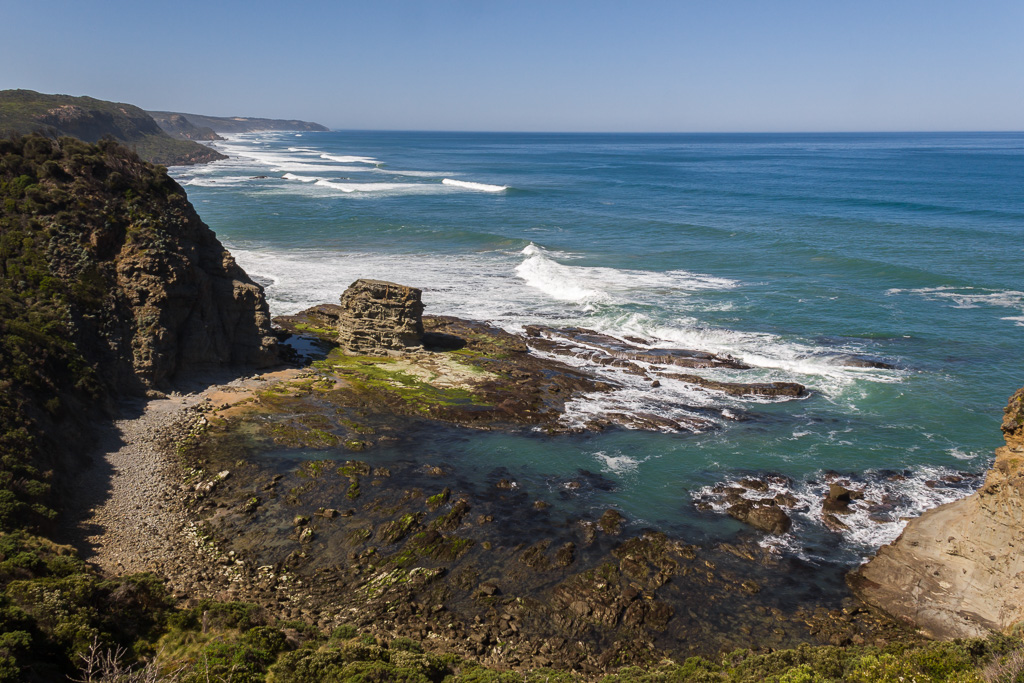 There was a constant thump of waves crashing, with plenty of good lookouts on the way. 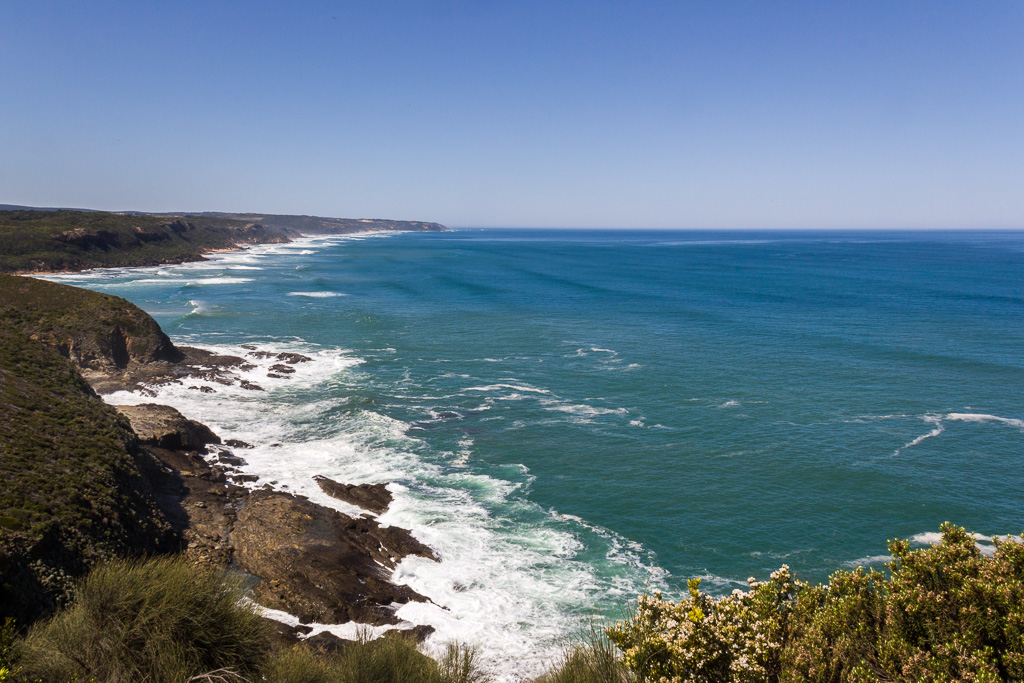 I enjoyed the vegetation as well, especially the grass trees, which were a favourite of passing bees. 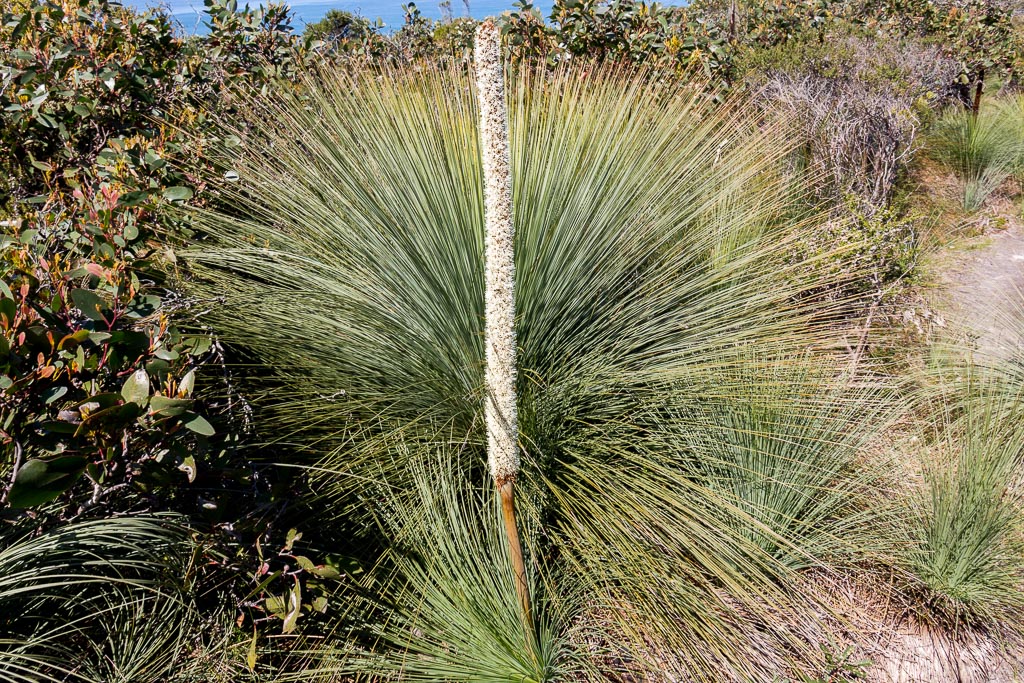 I’d walked through this section last year and I seemed to remember it took quite a long time. I’m not sure what happened, but I suddenly came across the path down to Johanna Beach. I almost had to question myself, “Surely that’s not Johanna Beach already?” 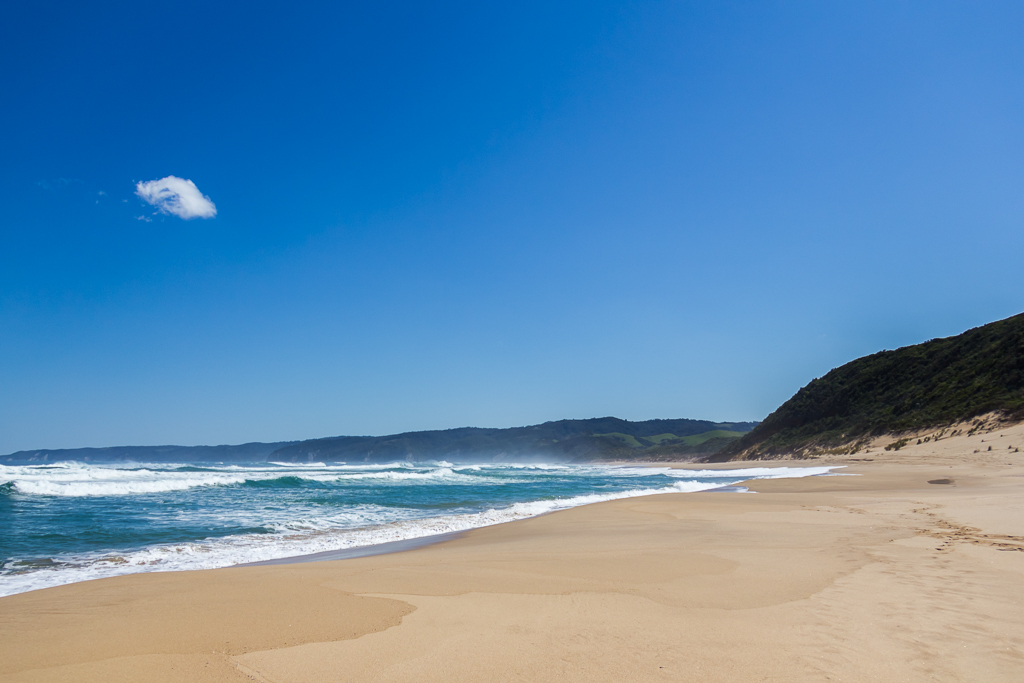 Well, it was. I’d killed the days walk, but I was a little wary, as I knew there was a two kilometre walk along Johanna Beach to come. There’s no other option either, other than going for a trudge on its soft sand.

The spring sunshine was surprisingly strong and I was feeling the heat a little. I was sweating like a wild animal and feeling a bit of sunburn on my hands, but the rest of me was well covered, Tutankhamen-style. I was quite eager to get off the beach and reach some shade, but the sand on Johanna Beach seemed even softer than what I remembered. Not just soft but bloody soft. The extreme of softness. Whilst slogging along, I made the mistake of looking back to see how far I’d travelled. Yep, it appeared I’d covered about 200 metres and was already feeling like dying.

It was a matter of keeping the head down and trudging on. As a side thought, I’d actually missed the AFL Grand Final and wondered who had won. I had a fair idea though, when in the distance I saw two people walking towards me and they were wearing Collingwood jumpers. I think this explained it.

I kept going, but stopped a few times as I was feeling the pinch a little. Finally nearing the end of the beach, I could see a mild water crossing coming up. Johanna River flows out across the beach. Last year it was barely a trickle and I strolled across. This time there was a bit more water flowing and although not a drama, it was at an annoying depth. A few metres wide and definitely over boot height. I didn’t want water in my boots, so I thought the best option was to take them off and wade across.

I was casually taking my boots off, when suddenly a wave out of the blue came surging in. I looked around and have a guess what happened? Yes, it went over the top of my boots as I was taking them off. What? The whole point of dicking around taking them off was over now, so I just strolled across with wet boots. I then stopped to watch the water and at no point in the ten minutes I sat there watching, did the water remotely come up as high as it did when I got wet. Was this some sort of fill-your-boots international conspiracy? 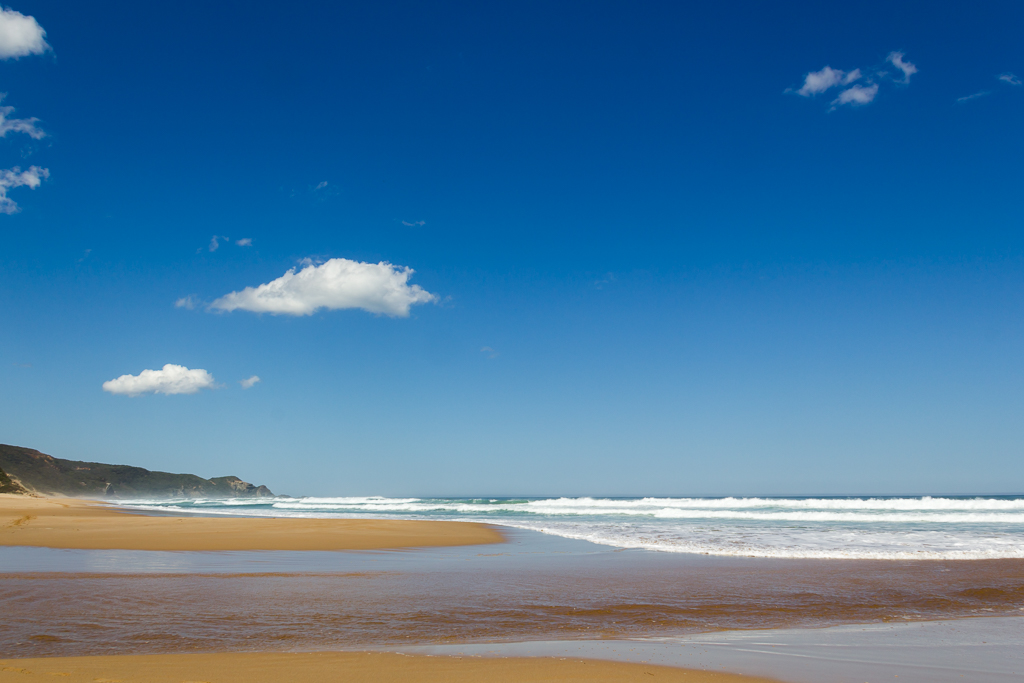 At least the ‘relaxing’ beach walking was almost over. I passed a few more people on the beach and then had to work out how to get off the sand. The exit is about a five metre high, soft sand climb. Nice and easy in thongs and Speedos, but a killer in boots and backpack. I huffed and puffed with every step forwards, followed by two steps back, as the soft sand gave way. It was pretty embarrassing and I’m not sure how I’m still not there now. I was practically crawling up and I didn’t want to look at the faces of anyone watching. Somehow I made the five metre summit and was feeling absolutely stuffed. I really think prayer flags should be placed at the bottom of that sand dune.

Now I was up with one final hill to go. The Johanna Beach hiking campsite is well known as one of the best of the walk. Sitting atop a hill overlooking the beach and far enough away from a nearby car camping area, so it’s nice and peaceful. The trouble is, the last little hill hurts and it fits the theme of a hill before stopping for the day. I was about to trudge up the last hill when I spotted a feral cat sitting on a fence. I snapped a photo, as I’ve found them rare to see in the day time, although they’re probably everywhere along the way. A real pest for the native wildlife I could imagine. 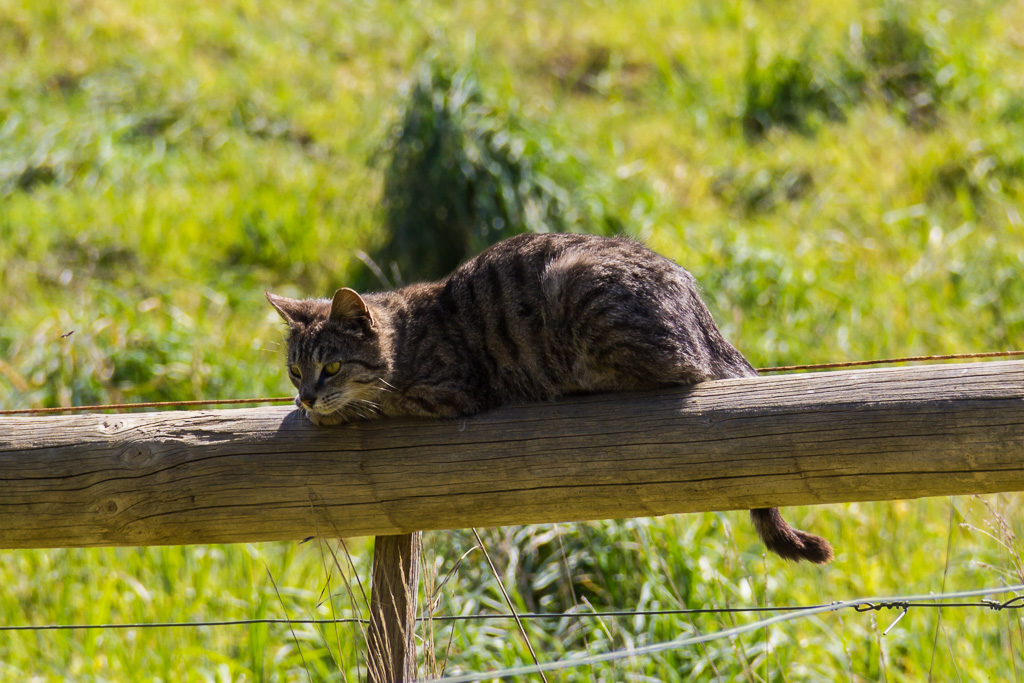 I slogged up the eternally climbing vehicle track to the campsite and I was feeling absolutely stuffed when I got there. I poured some water over my face, dumped the pack and lay on the grass catching my breath.

Lying there, I was greeted by an abundance of mosquitoes, so one went the heavy duty DEET. I was done for the day. Camp site number 8 is the pick of the sites and that’s the one I set up in.

It was getting late in the day now and it appeared I’d have the camp to myself. At one point I was a little concerned though, when I could spot some hikers trudging across Johanna Beach. They never arrived at the camp though, so I assume it was a few of the kids I saw earlier in the day. I’d been stopped for at least a couple of hours when I saw them, so they’d had a long day.

Well, it had been a good day of hiking and now it was time to eat and hopefully get a good nights sleep. Sans music. 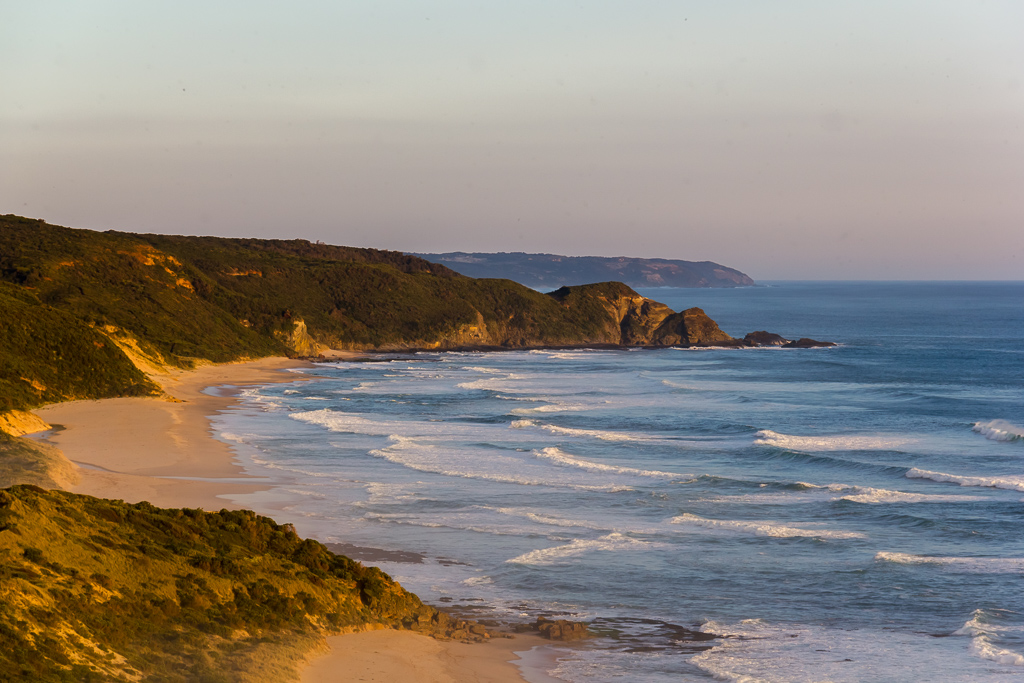