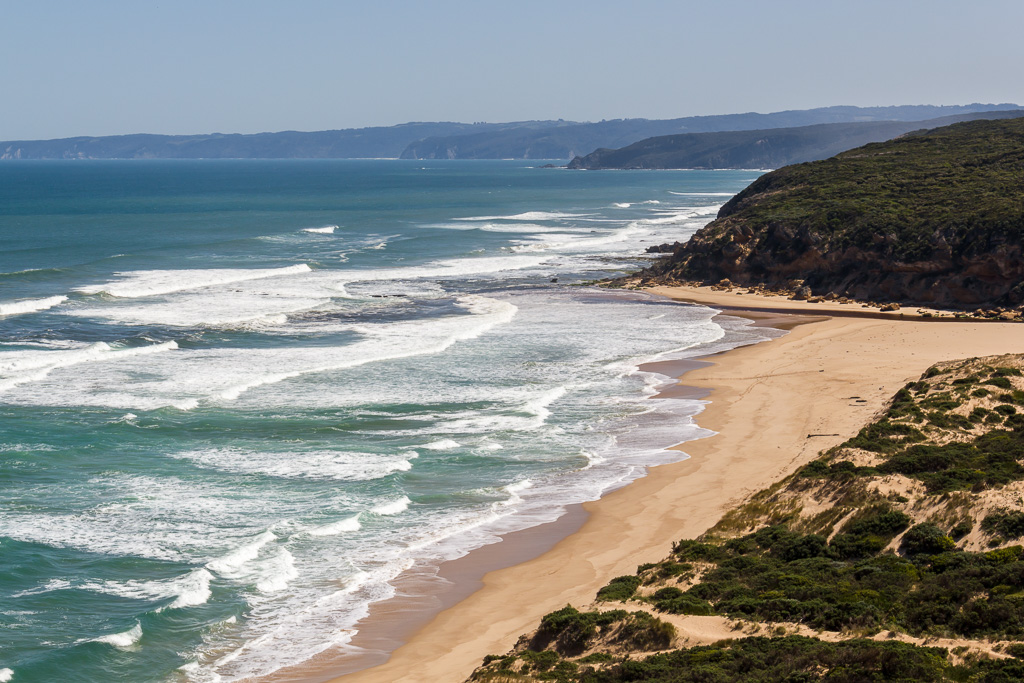 A night spent in the land of the koalas was an interesting one. I confirmed the bizarre, demonic purring I heard a few nights earlier at Elliot Ridge was a koala. I know that, as I had the very same noise letting loose every few hours for no apparent reason. Directly over my head. I’d be impressed if you can stay asleep when the rumble of a koala starts up. Either you’re a heavy sleeper or suffering from the condition known as death.

It was also a bit of a weird night, as I was not enjoying having a deflated sleeping mat. I felt like a hobo, as I combined sleeping on the ground with a pillow, which consisted of rolled-up clothes. It wasn’t working well, as I woke up with my back aching and for something a little different, my neck creaking. I love hiking.

In order to get up, I wished I had a portable walking frame with me (titanium of course). My initial steps were similar to a person who’s 185 years old, but once moving and warmed up, it wasn’t too bad.

One other annoying thing (will he ever stop complaining?) was during the night, I rolled over at some point and absolutely obliterated my glasses case. It’s as if I was trying to convert them into pâté. I guess the case did what it was supposed to do, as the glasses inside were okay. If I don’t have my glasses, I can barely read (what’s with the 40’s? It sucks!) I would now have to be careful with my glasses, as I no longer had a case. It was becoming the hike of destruction. 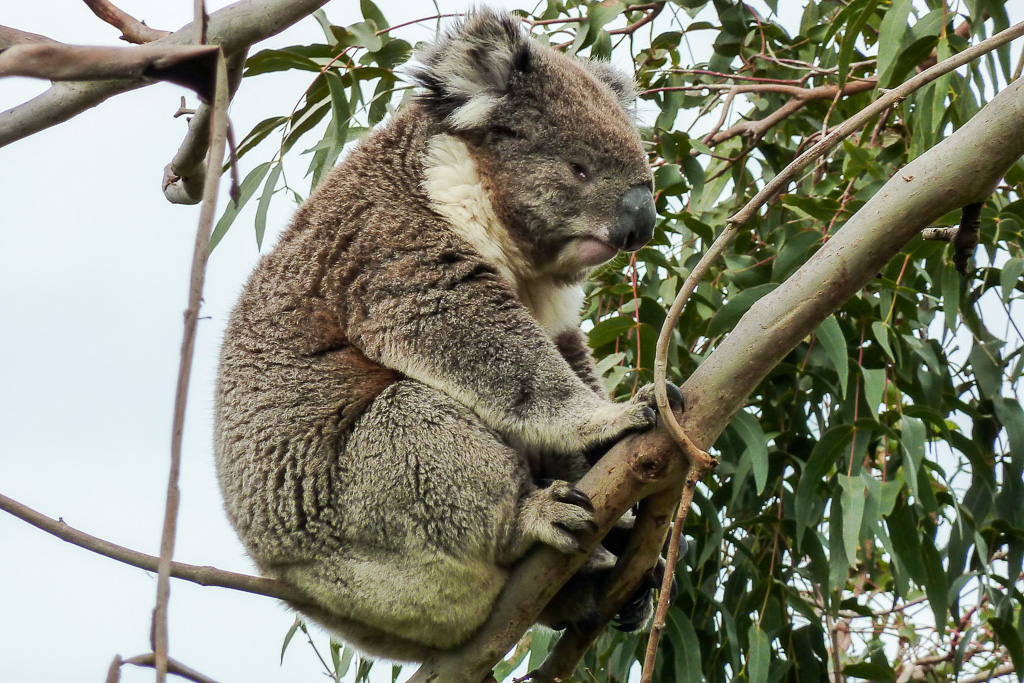 I don’t think he likes me

It had been an eventful evening, but it was a new day, full of all sorts of possibilities. There was of course, a monster sized group of hikers also within the camp and early on, I sounded them out to get a feel for how far they were going to walk for the day. The answer was surprising, “Nowhere. We’ve decided to call it quits and get picked up.” On the outside, I showed disappointment, but on the inside, I was high-fiving my internal organs, as there was the possibility of empty camps to come, plus peace and quiet (I hoped).

I suggested they should walk a short distance from the camp and check out the Cape Otway Cemetery, which is a small yard with a handful of graves in it. The lighthouse keeper’s family members and a couple of sailors from the ‘Blanket Bay Disaster’ (what was that?) are buried there. It’s a peaceful spot to reflect on the hardships early explorers endured along this coastline.

The trouble is after talking it up to the large group, I just got blank faces in return. Essentially, I wasted the explaining oxygen I’d spent, as they weren’t interested. Oh well, history only appeals to some people I guess. They were only going one way and that’s to the car park.

I left them alone and began to pack up. On top of the bivy, I lay out my sleeping bag for airing in the sun and planned to put it away last. With a large group around, it was difficult to get a clear run at the comfort station. Finally though, it was free, so I thought I’d get in there whilst it empty.

Five minutes later I returned and something caught my eye. The sleeping bag and inner sheet I use were quite wet. I thought, “Huh? What’s that?” As I picked them up for a closer examination, I glanced above and my question was answered. Directly above the bag was a koala with a nonchalant look on his face, whilst munching on gum leaves. I then realised what had happened. The cute, furry bastard had pissed into my sleeping bag! 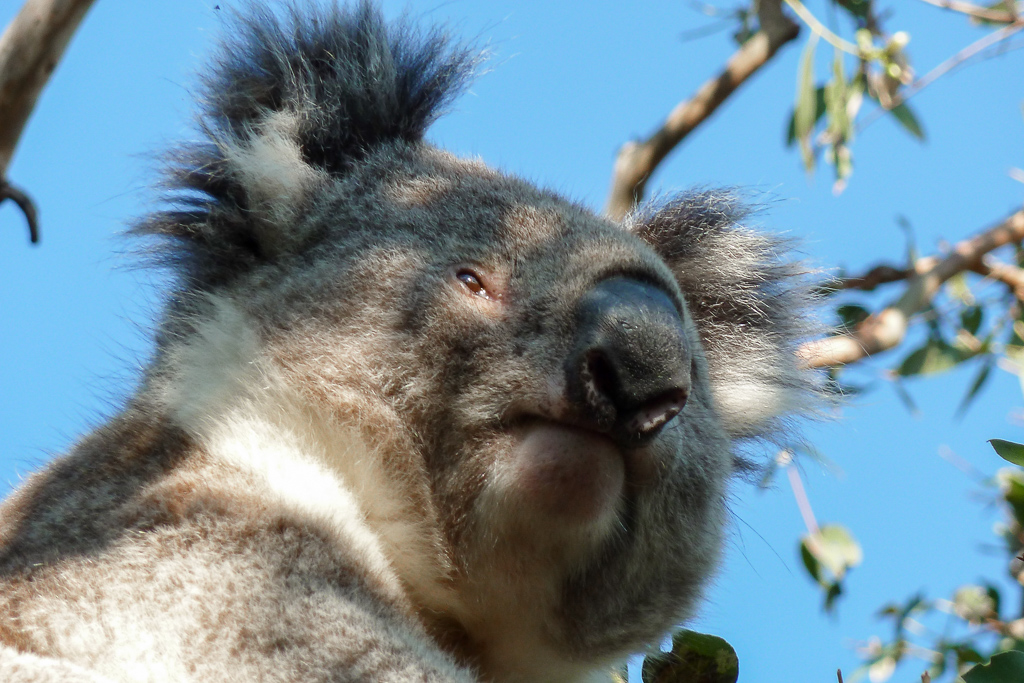 I was mildly hyperventilating and trying to calm down, but it was difficult. Cautiously I raised the sleeping sheet to my nose, as I knew I had to smell it. Guess what? I’ve got the answer you’ve always desired. As all your life, I know you’ve wondered what koala urine smells like.

Don’t worry. I’ll tell you. It smelt like being trapped in a eucalyptus factory. Not surprising really, as their diet seems to consists of nothing more than leaves. Sure, I know what you’re thinking. It can’t be too bad? Sounds refreshing? Similar to something you’d spend money on in a health shop?

I looked around the spot I was in and not one other area appeared to be wet. The entire camp was open for business for this koala to have a leak, but instead he’d opted for my sleeping bag. Oh, not just on the bag either, but smack bang where my head would rest whilst sleeping. 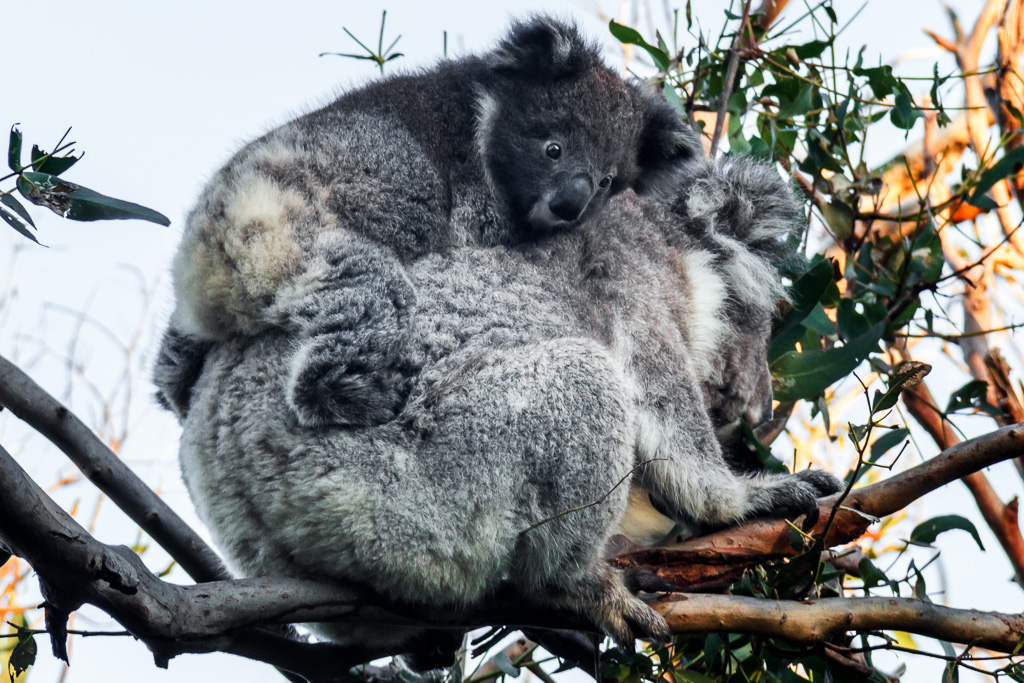 Anyway, I packed up my urine bag and thought best to leg it. The next stop was Aire River, which as a bonus, wasn’t far away. It would give me an opportunity to get to camp early and dry out the wet stench in my pack.

I headed off and within minutes was at the cemetery. I still think the super-sized group missed out, as it’s an intriguing spot. I’d took some obligatory photos of the gravestones… 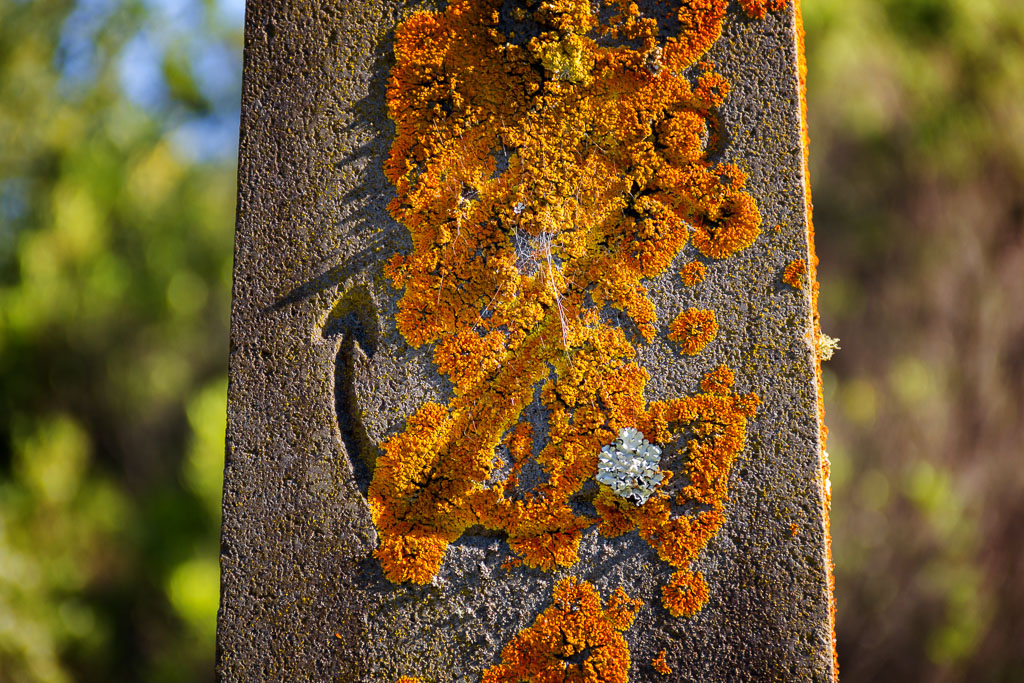 …but my attention was drawn to other things. Such as bright flowers, which stood out in the morning sunshine. 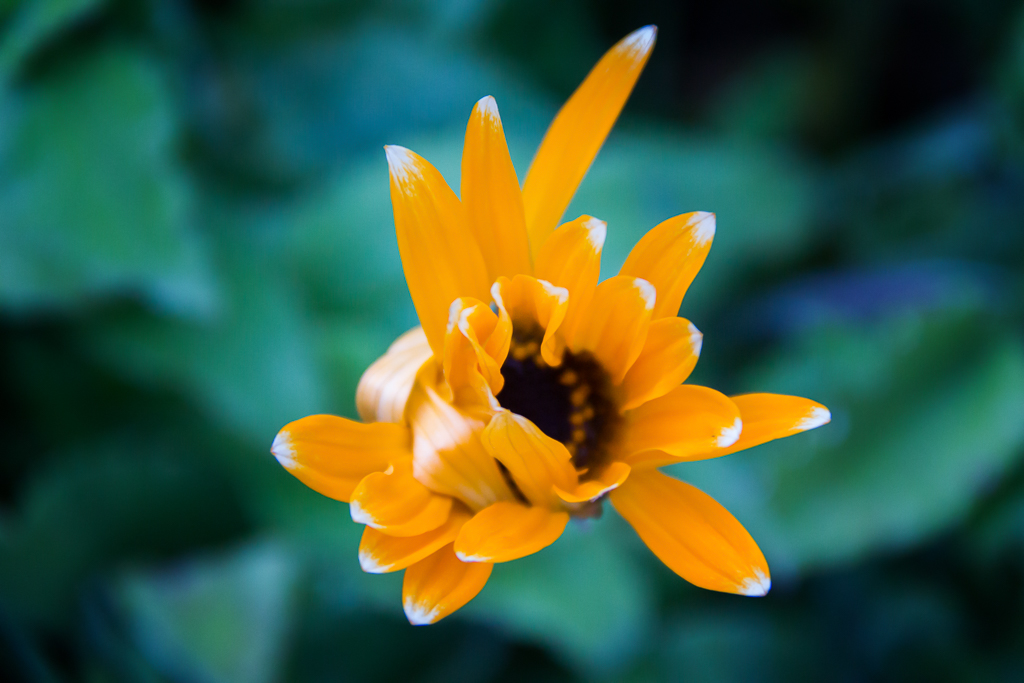 Continuing on, I was soon leaving Cape Otway Lighthouse behind. Its impressive structure was barely visible, as it played peek-a-boo behind the trees. 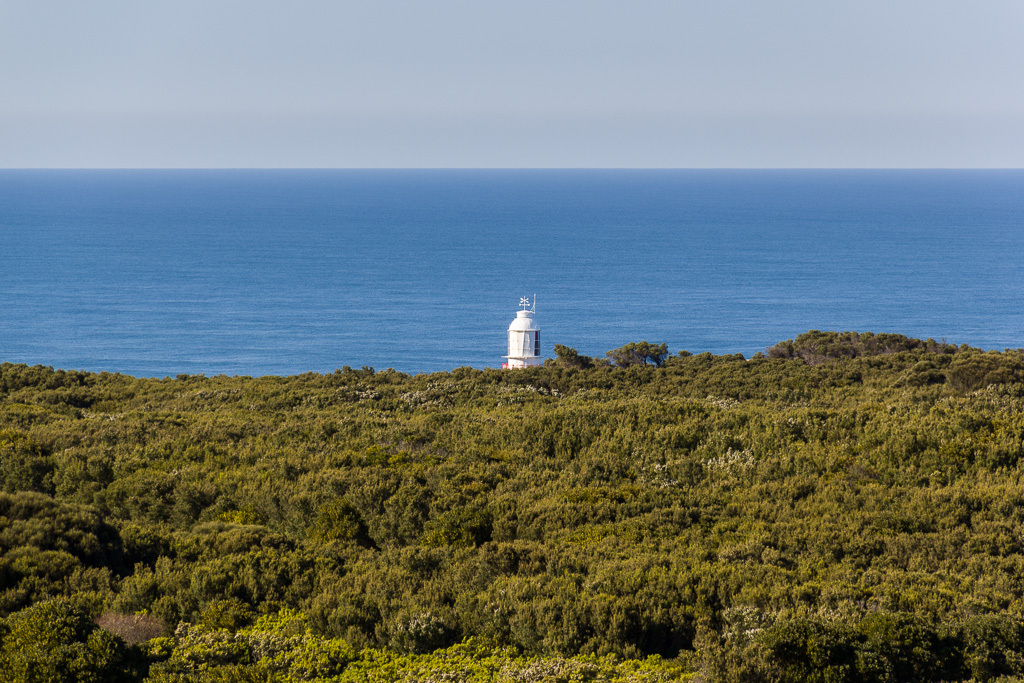 Strolling on, the walking was quite easy and the weather sunny, but not too warm. Mind you, I panic about sunburn, so I was wearing my long sleeved shirt. When the sun’s out, I’m dressed up like a mummy.

For most of the day, the path followed the cliffs and the elevated position gave me fantastic view of the ocean. I could see Station Beach ahead of me and hear the constant sound of waves hitting the beach. 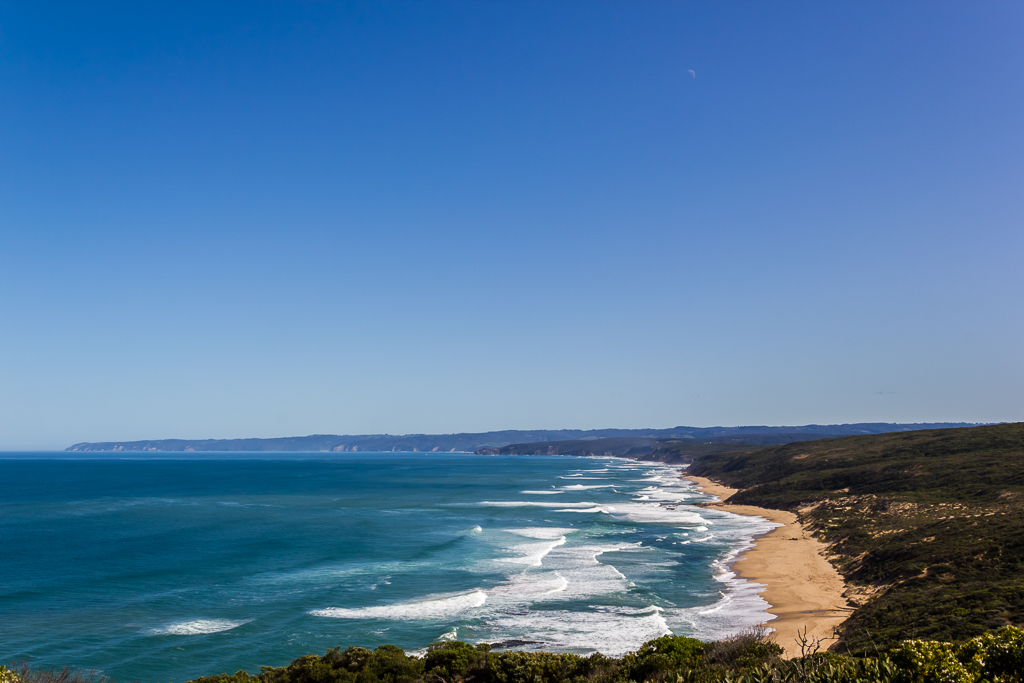 Along this section, there’s an option to leave the cliffs behind and wander along the beach. The previous year, I thought it sounded like a great idea. It wasn’t. The sand on Station Beach is mega-soft when carrying a backpack and after about an hour of purgatory, I elected to head straight for the hills as soon as possible.

On this occasion, I had no intention of heading to the sand, so I continued to wander and at one point was surprised to see a wallaby jumping near the cliff edge. As he stopped to warily check me out, I managed to capture him in a couple of photos. Taking account of his precarious position, I didn’t want to scare him, as the way this hike had been going, there was the possibility I could cause a wallaby suicide. 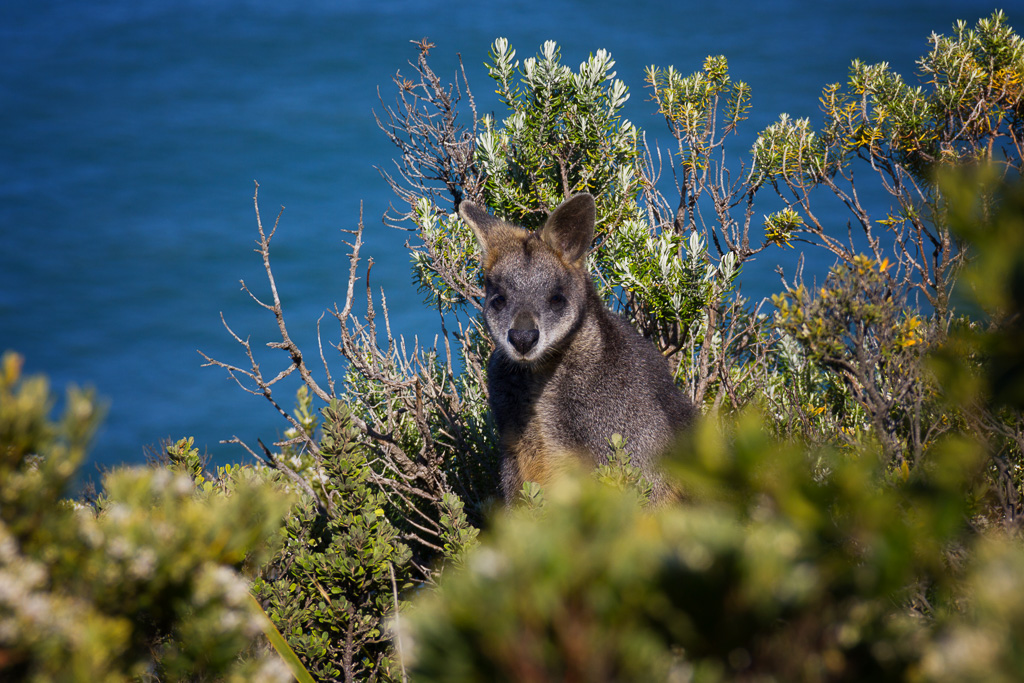 Ambling on, I eventually reached a few lookouts and I could see Aire River bridge in the distance, which I’d have to cross to get to my camp for the evening. 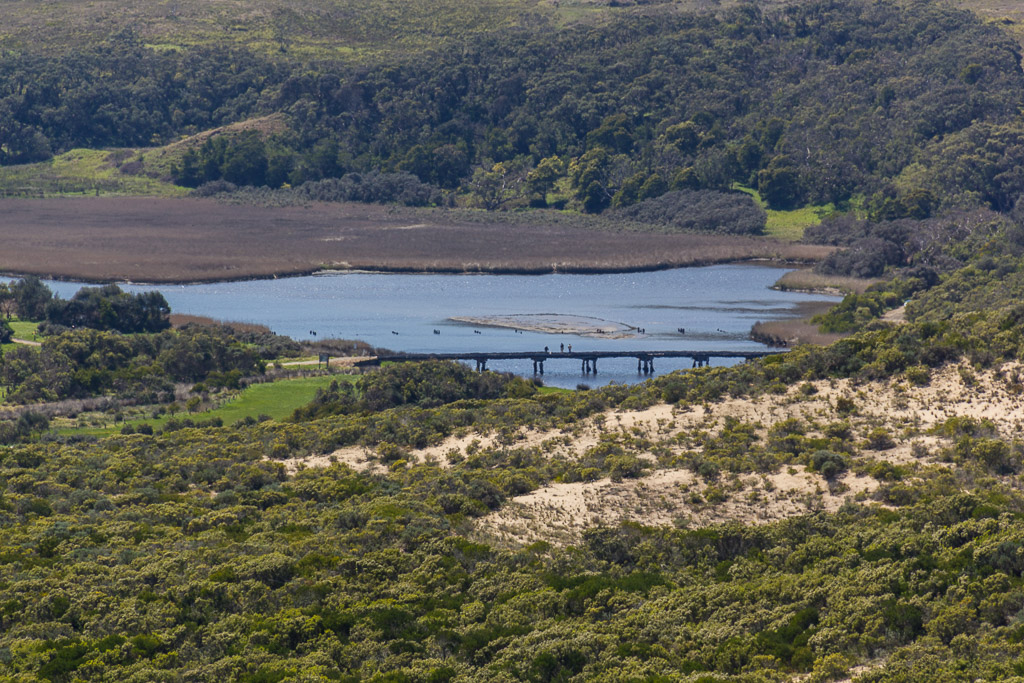 Moving on, the track turns to sand, before beginning to descend. I was glad to be going down rather than up, as it would be a bit painful, just getting some grip. As I thought this, suddenly a day walker came around a corner and in a strong English accent said, “Look out ahead, a tiger snake is on the path!” He was pretty pumped up as well, so I acknowledged him and began to scan the path ahead, as if I was looking for buried mines. I was suspicious of everything, “My god! What’s that??!!” Oh, it’s just a stick.

On I tip-toed, scanning the ground, but I never did see a snake. Besides treading carefully, there was one other thing on my mind. I could smell eucalyptus. I’m not sure if it was my brain traumatised by the mornings events, but I came up with a cunning plan.

Once I reached Aire River, I decided to give my inner sheet a wash in the fresh water. I dropped the pack and pulled out the offending item. I noticed a few people fishing on the Aire River bridge.

They looked at me, as I headed to the water with the bright blue material in my hands. As I began to wash, I must have looked like someone on the River Ganges. The sheet was being flung about, rinsed, slapped and then the process was repeated. I’m sure the 10 minutes of belting helped to de-stenchify it a little. 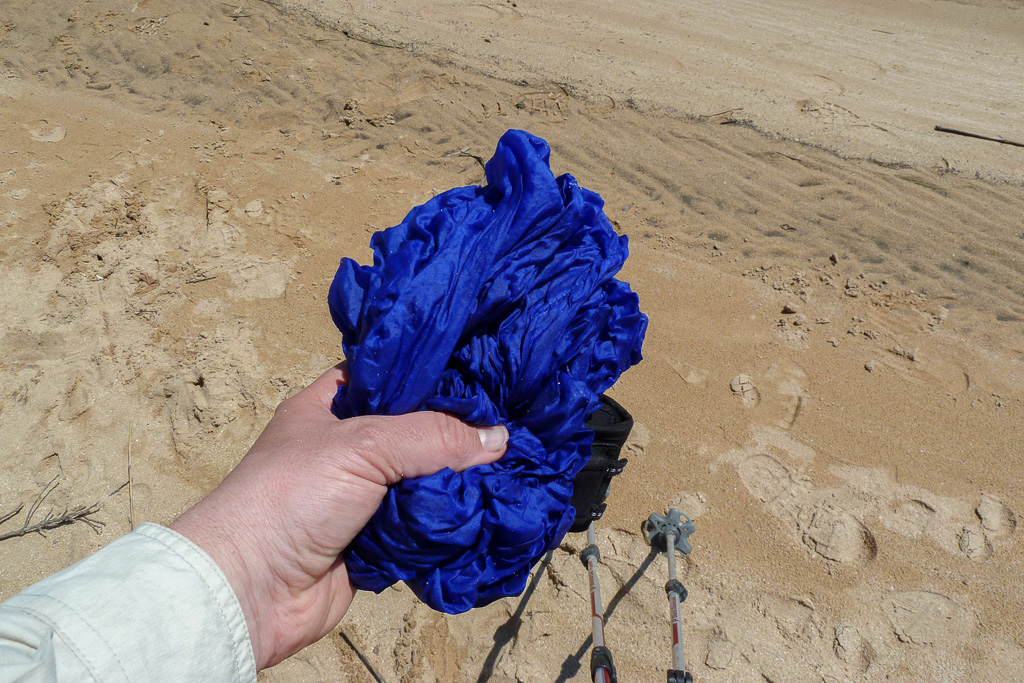 I then crossed the river, saying hello to a bunch of severely obese blokes fishing. It’s only a hunch, but I think they must eat way more than the fish they catch. I was actually surprised the bridge was still standing, as they struck me as the sort of blokes who’d eat it if they were hungry.

Before wandering up to the hiking camp, I checked out the information board, which has a sculptured, see through leaf thing happening (I apologise to whoever created it, as I can’t think of a better way to describe it). It seemed worthy of a photo. 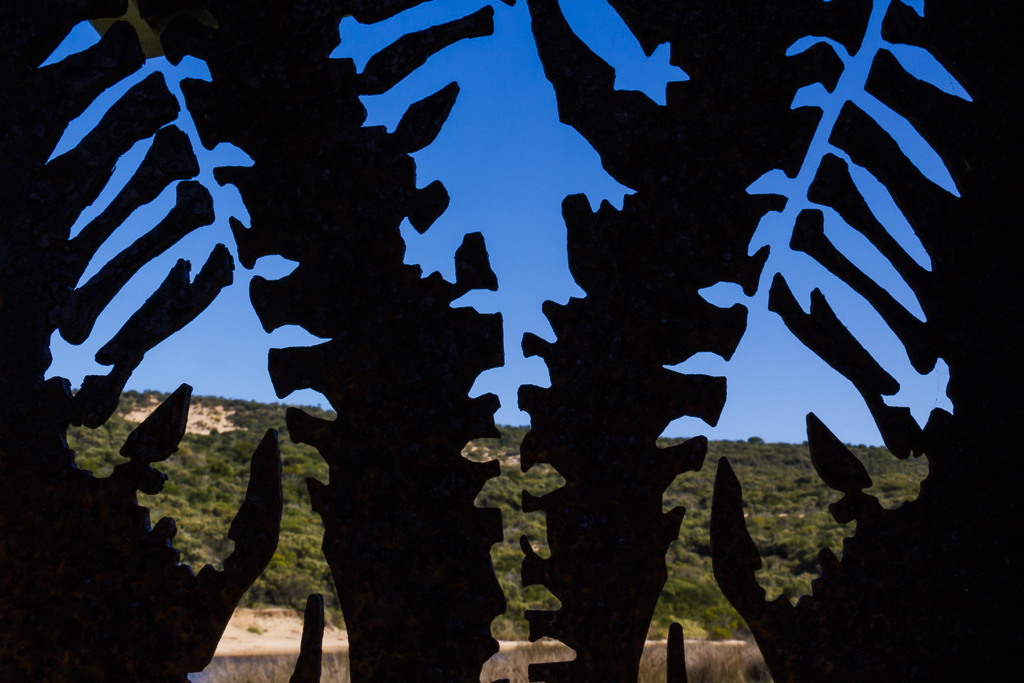 As a bonus, the hiking camp is separate from car campers. It sits near the top of a hill and once I got there, I found it empty. This was good, as it would hopefully mean a peaceful evening coming up. Then again, knowing my luck, a swag of people could appear at any moment.

It was still sunny, as I set my things up and best of all, got to dry out my sheet and air the sleeping bag at the same time. 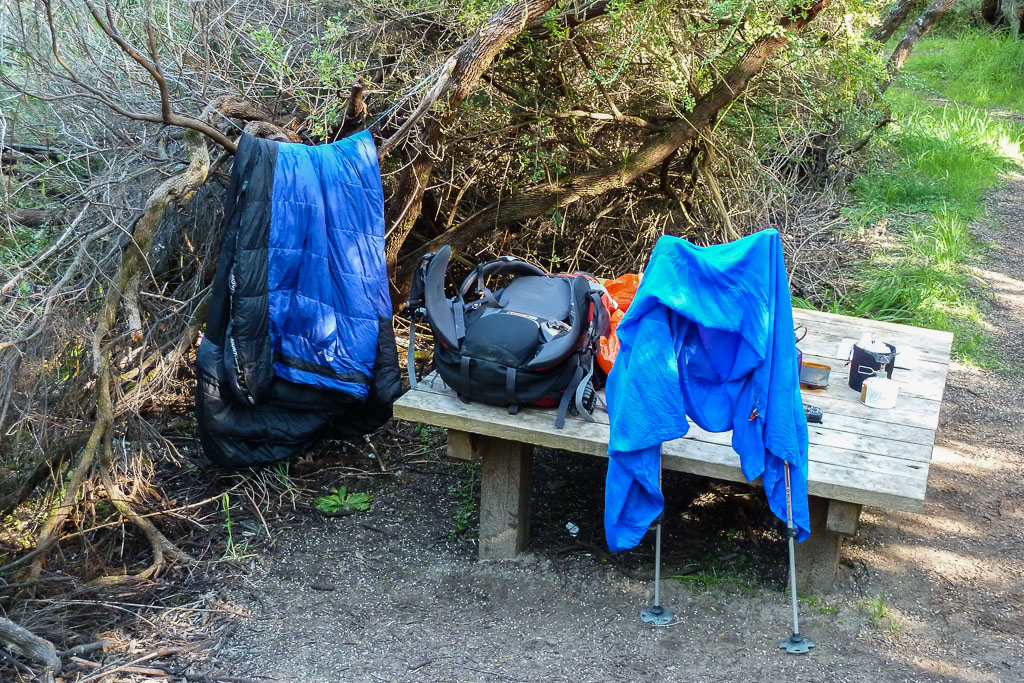 I was sitting back in the sun, relaxing and feeling a late afternoon zen, when suddenly a bloke, who appeared to be nothing more than a beard, crashed my relaxation.

He was from Parks Victoria and after introducing firstly his beard and then himself, said, “What are you doing here?” The Great Ocean Walk is a ‘book only’ hike, in which a camp site is allocated out of eight sites by Parks Victoria. I told him I’d booked and had a camp site number. He replied, “Not according to my record here. I better look at your receipt.”

Bloody hell. Lucky I had it, as he followed me to my gear and I retrieved the receipt, which also had a mild eucalyptus smell to it. He perused it and after some beard fondling, he acknowledged his record was stuffed up. I asked him about the large sized group I’d been with for the past few days. Had they booked? He replied he had no information on them either, so who knows what’s going on? Outside peak season I can imagine quite a few people not booking and just doing the walk, which I felt the big group had done.

Oh well, look at me being all law abiding…! The bloke wished me well and then left, with his beard leaving a few minutes later. I then awaited the crowd who I thought would surely arrive, but in the end no one did. I had the camp to myself for the night, so I set up in the best camping spot I could find. The airing of the sleeping bag and the washing of the sheet helped a little, as I no longer felt like I was getting punched in the face when they were near. Aire River, Great Ocean Walk is a nice camp. I think. Unfortunately, my only vivid memory for the day is the stench of koala urine wafting up my nostrils. Anyway, with darkness approaching, I went to bed reflecting on quite an unusual day. 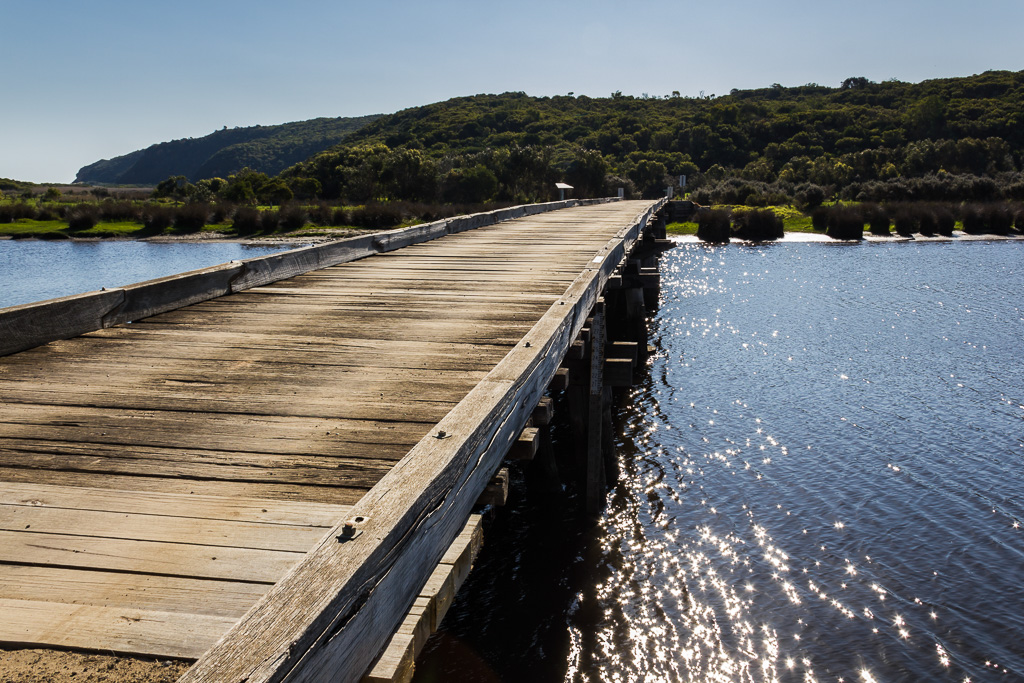