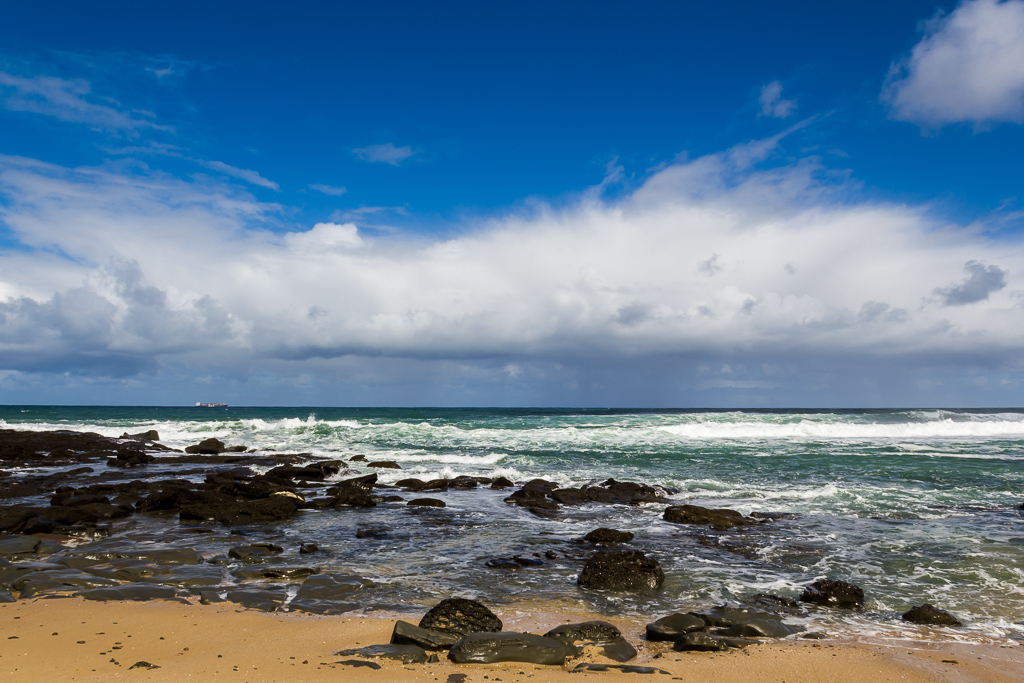 It was day one of a week of hiking. Firstly though, I had to drive from Melbourne, so I needed to leave early, in order to park my car at the end of the walk. I’d then catch the bus back to Apollo Bay for the start. The bus only runs once, every second day, so in order to catch its meagre offerings, I had to be at Princetown bus stop at 10.45 am. There weren’t many options, so I couldn’t miss it, otherwise I’d have a balls-up on my hands before the hike had even started.

Luckily, coordinating getting back to the start of the walk was more intimidating than the actual hiking for the day. I’d done it before, so I knew I only had a 10 km walk from Apollo Bay, following the coastline until camp at Elliot Ridge, Great Ocean Walk.

Leaving home at some insanely early time, I made it to Apollo Bay by sunrise. Actually, I was there before sunrise, but parked out of town and snoozed in the car until light appeared. 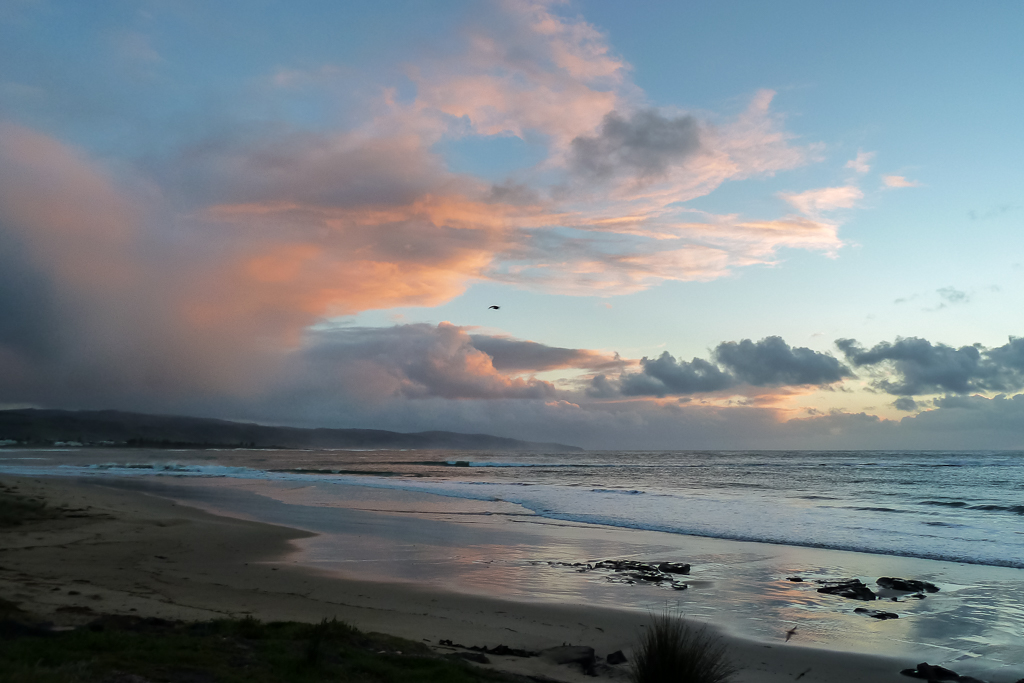 After making a quick stop at the early opening shops, I continued onto Princetown and parked at the general store. I’d certainly made good time and was left with some hours to kill. There wasn’t much to do, other than drink hot beverages.

I ordered a cup of tea at the store and the bloke asked me if I wanted a large. Sure. Why not? I was then given a tea, which appeared to be in a cup used for milk shakes. It’s easily the largest tea I’ve ever drunk in my life. It was quite a moment and handy, as drinking it took up most of the time I had to kill for the bus. 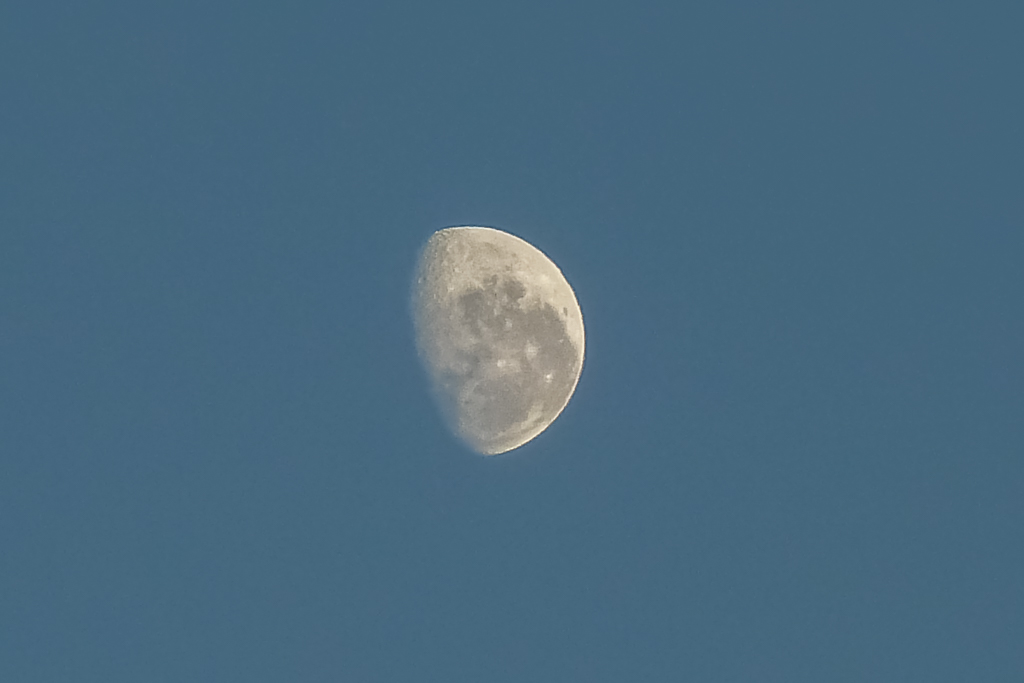 I got my stuff together, but went through some umming and ahhing over whether to take gaiters. I didn’t use them last year on the same hike, so I thought I’d leave them behind to save weight. You may ask, “But aren’t they on your legs, so how does that save weight?”. Yes, you’re correct, but don’t come here expecting logic.

I then strolled to the bus stop getting a feel of the new pack and it felt pretty good. Well, pretty good over 300 metres anyway. The bus was on time, so it was one major worry out of the way. I could then sit back and relax for an hour or so until reaching Apollo Bay. 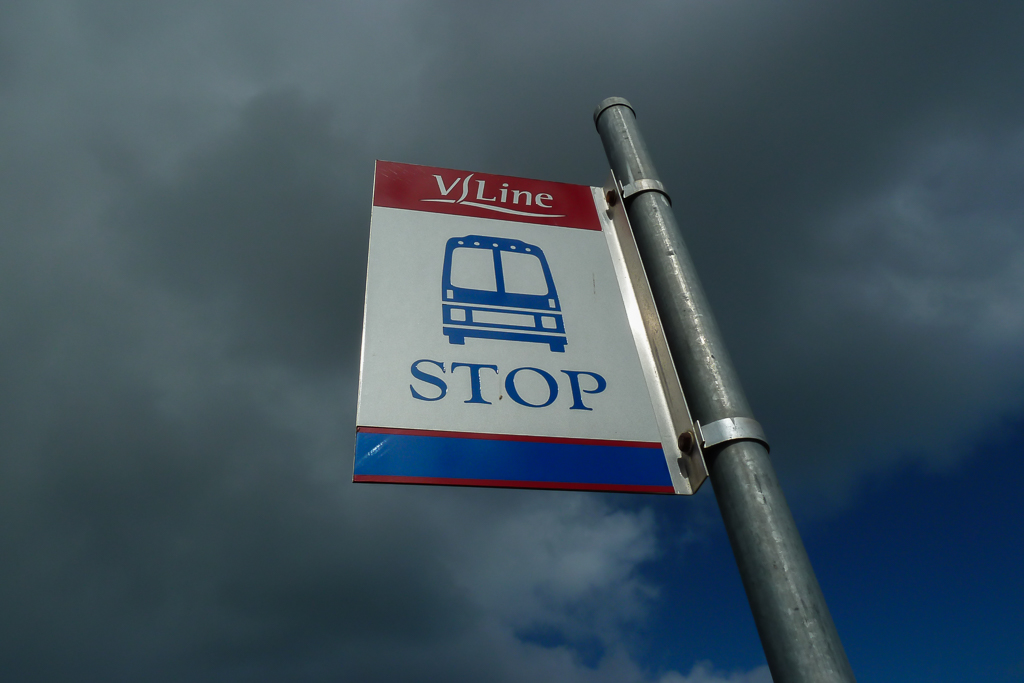 The previous year I’d hopped out of the bus at Marengo, which is a couple of kilometres short of Apollo Bay, but not the official start of the Great Ocean Walk. Actually, I didn’t have much choice. The bus driver at the time implored me to begin at Marengo, as he said I’d appreciate his local knowledge regarding not going to Apollo Bay. Seeing how he stopped, got out and unloaded my pack from the storage compartment and placed it on the side of the road, I felt compelled to start walking from that spot.

This time though, I thought I’d try the official start, plus it was a chance to get some more food and visit the Apollo Bay Information Centre. At the centre I bought a new map for the walk which is a beauty. I asked a staff member if there was any up to date information about the walk, such as latest conditions etc. She answered, “What should you know?” I’m not even sure what that means, so instead of cracking out my portable Enigma cipher machine I decided to get going. 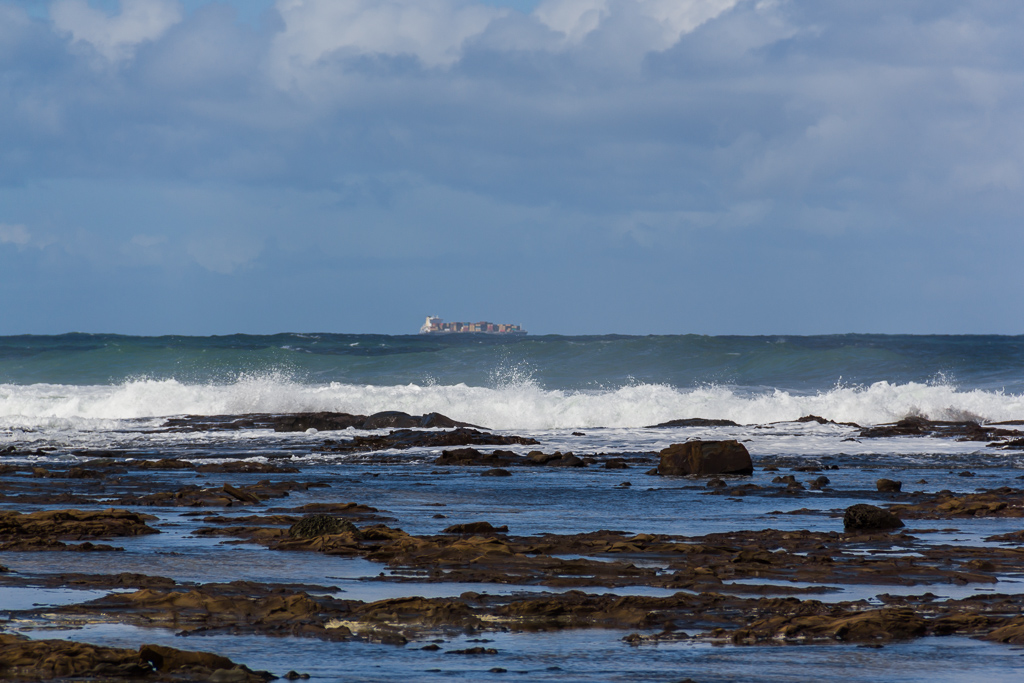 Guess what? The previous years bus driver wasn’t lying. There is a good reason to start a few kilometres up the road at Marengo. The official start takes one on a roadside stroll. It’s not very inspiring, but at least it’s flat, so I had an opportunity to warm up my legs. Best of all though, there’s a public toilet on the way, which is handy as the worlds largest cup of tea suddenly began to attack me.

I entered Marengo and then the path left the road, before weaving through a caravan park. After some side-stepping of barbeques and bikes littered around the caravan park, I finally wandered onto a coastal path. Finally I felt like I was actually on a hike. 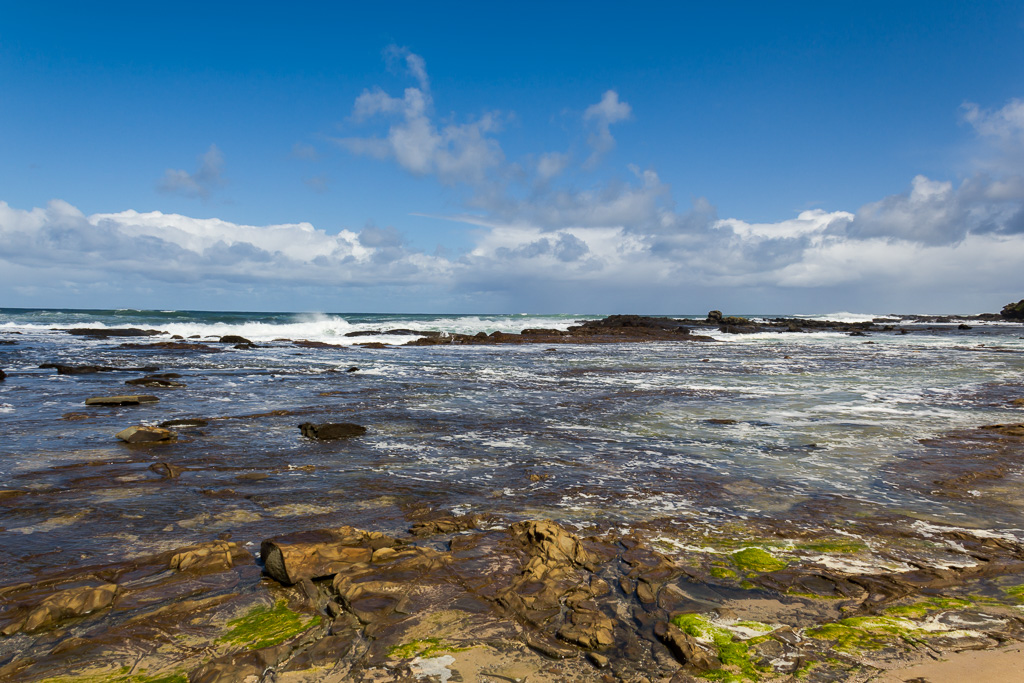 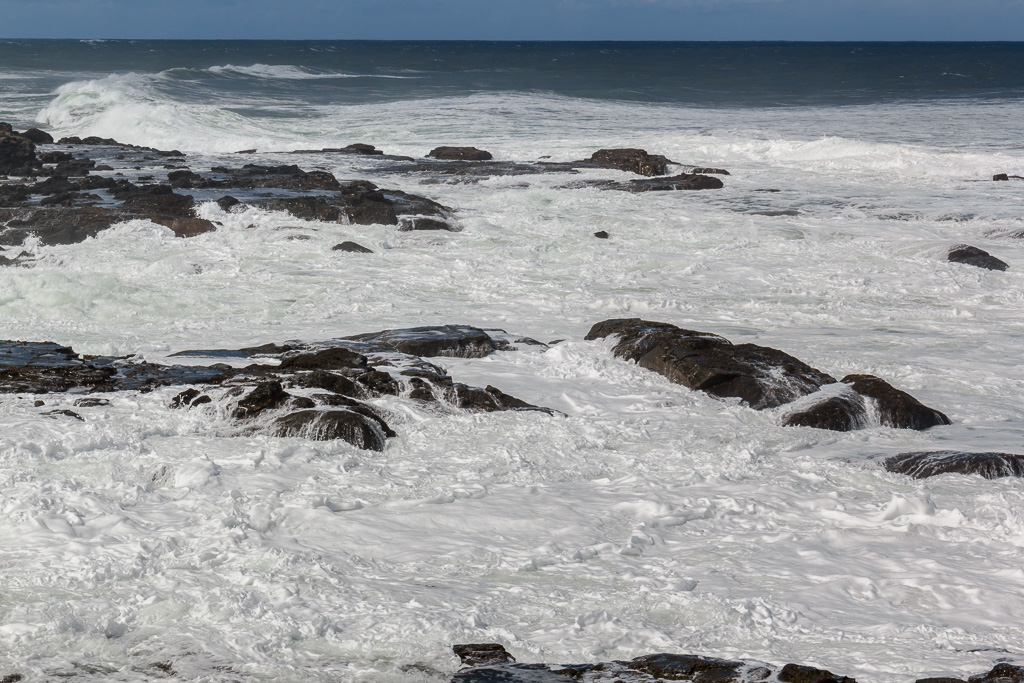 The entire walk has a number of ‘Decision Points’ signposted where the option is given to either walk on the beach or go inland in case the tide’s not in favour. There’s an incredible five decision points in this first leg of the walk. I’m not sure if they’re there to get people in the swing of seeing them, but they seemed to appear every 30 seconds. I’m not sure what I even did, but for the most part I stuck to the beach as the waves were pretty large. I was hoping to get a few photos of super sized waves. As per usual I got one good photo for every 10 crap ones. 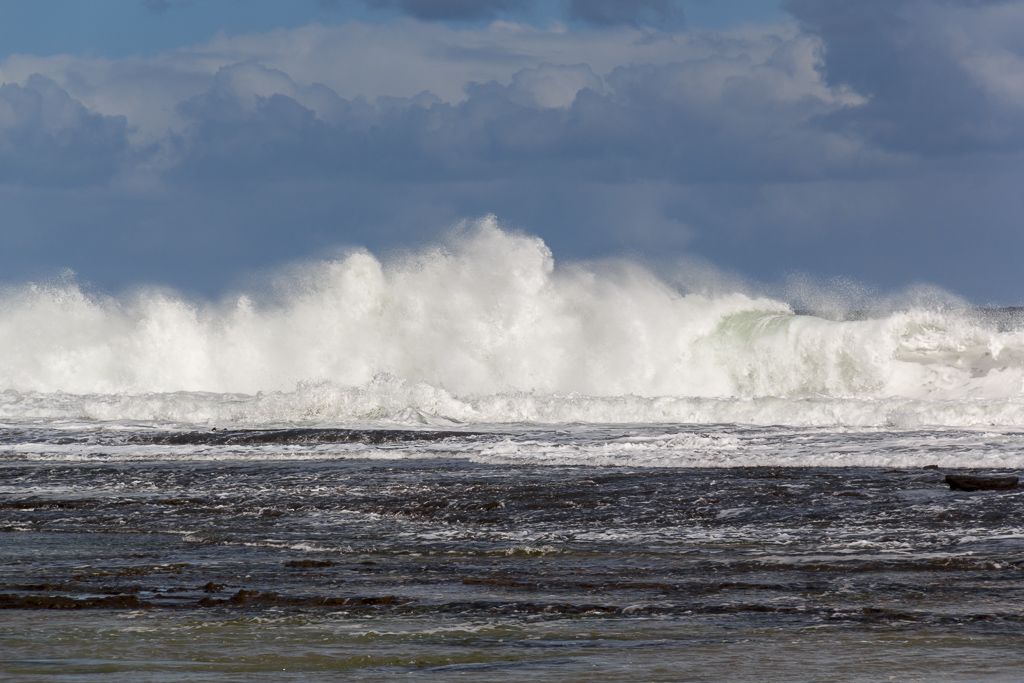 I had to leave the beach at one decision point and began to climb Bald Hill. I felt like I was climbing Everest, when in fact it can’t be more than 100 metres in height. I really should train before hiking more often. At the top, there’s a nicely placed seat, which looks right across the coastline. Definitely a good spot for a quick break. 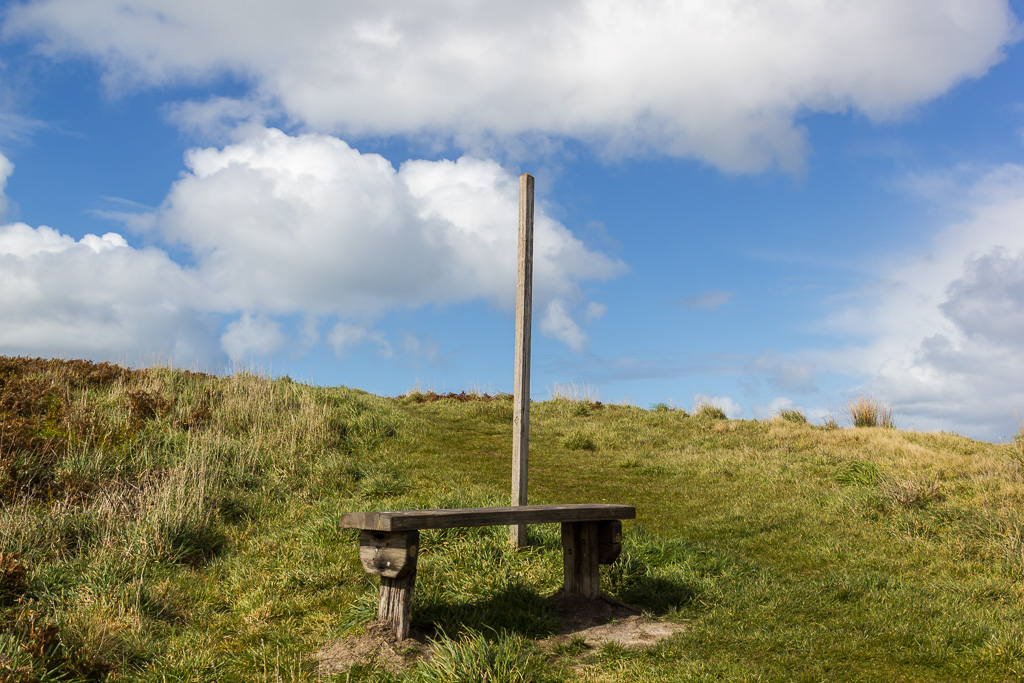 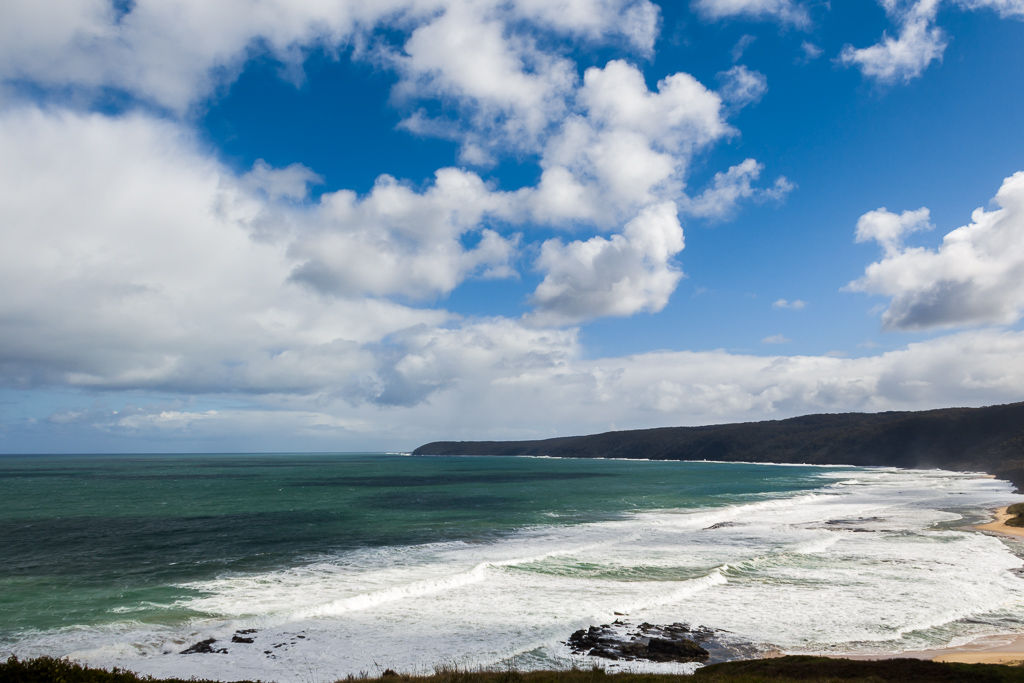 Leaving the rarefied air of Bald Hill summit, I began to notice the path was quite muddy and wet. It’s then I thought it would be nice to have some gaiters. The previous year had been dry, but then again it was in the middle of a ten year drought, so maybe I should think about things more. 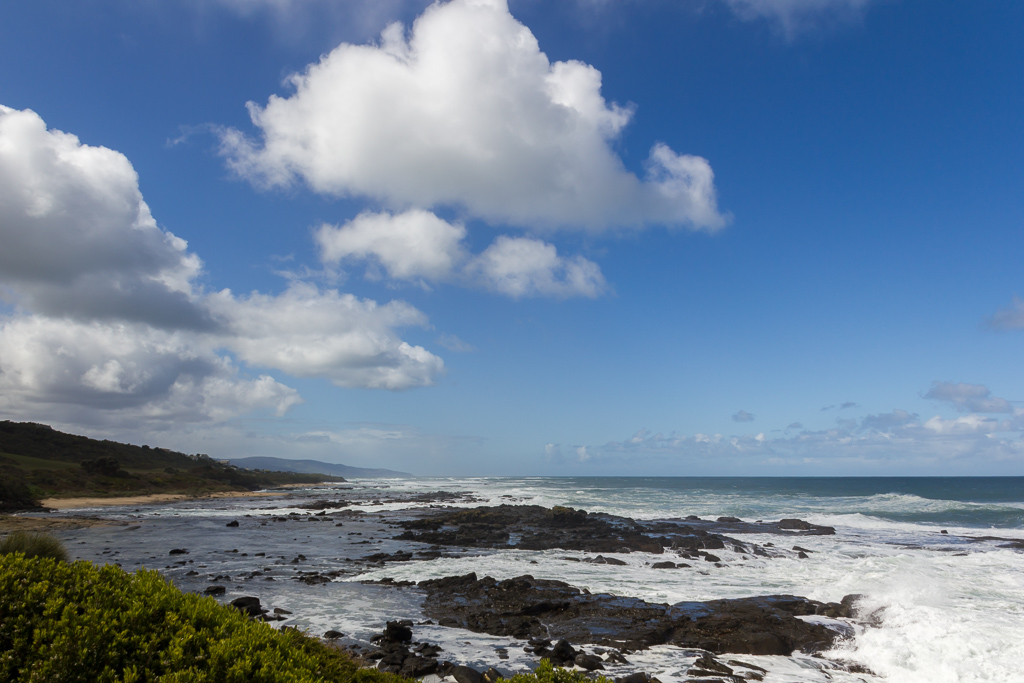 I passed a few day walkers here and there, until I reached Elliot River. This was another decision point, before the path suddenly swung straight uphill to the first camp site. It’s then I remembered the common theme of the Great Ocean Walk. Generally, most camps are on the top of a bloody big hill. 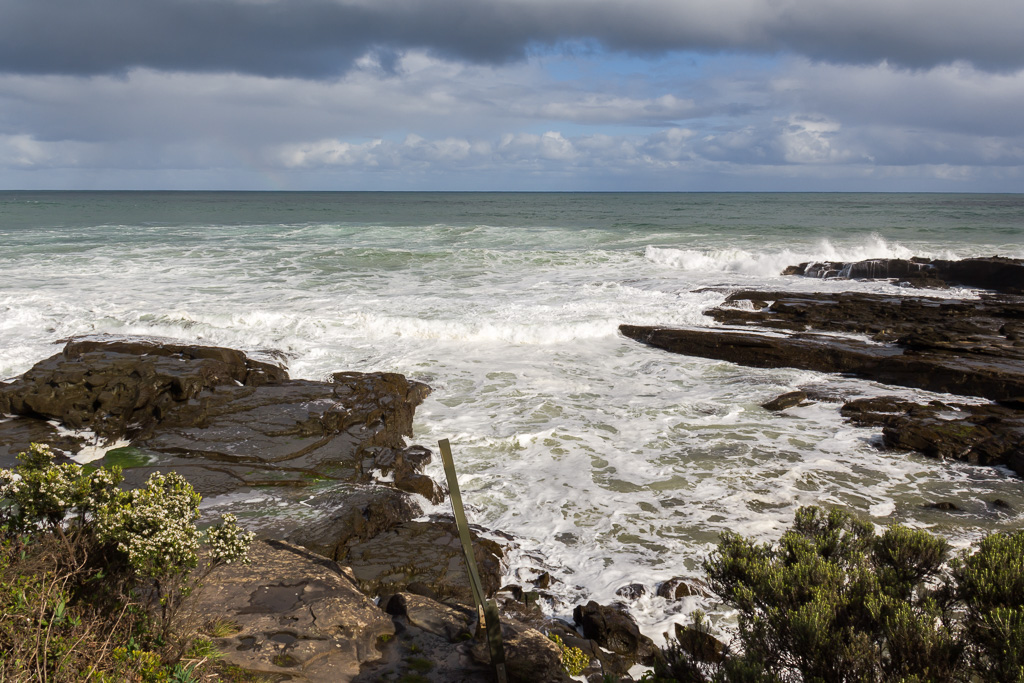 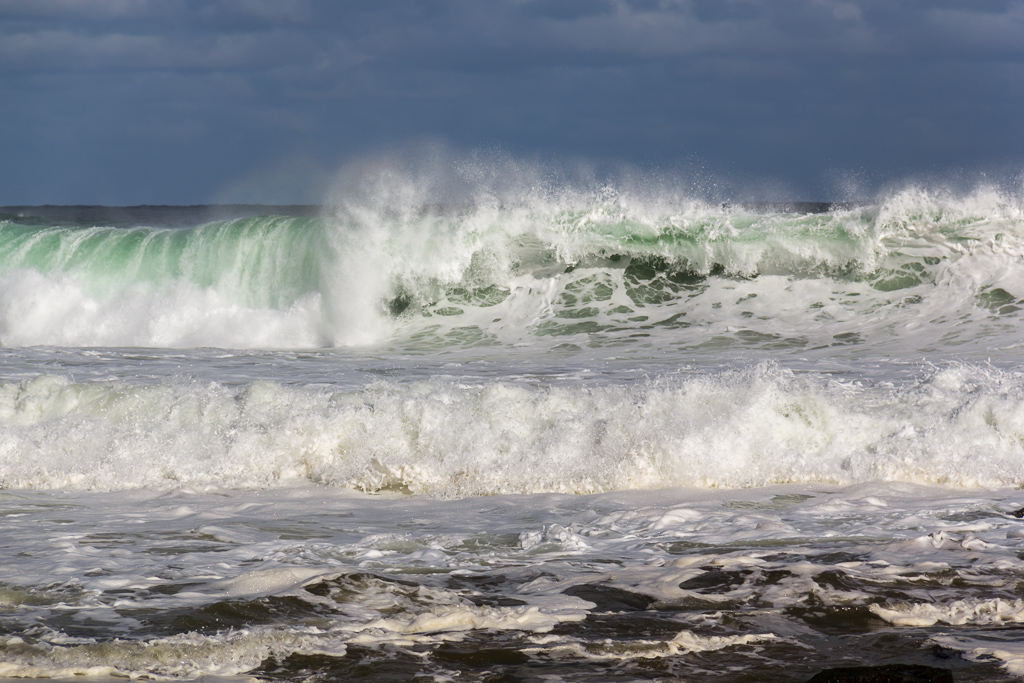 I chipped away at the hill until I reached the camp site, which is well laid out with shelter kitchen, toilet and water tank. No one else was there and as it was now late afternoon, I assumed it would stay deserted.

I set up the bivy and had something to eat, before considering an early night. Suddenly though, I could hear people approaching and with light fading, four blokes arrived in the camp.

We had a bit of a chat and I was impressed to see all, except one were wearing runners. I’m not sure how people can survive without boots, but I guess they like the fast walking aspect and didn’t mind wet feet.

As I was pondering this thought, how they’re quite hardy and have no regard about wet shoes, one of them asked me, “What’s the rest of the track like? My feet are wet and I don’t want them to get worse!” Okay, maybe I thought too hard about this. 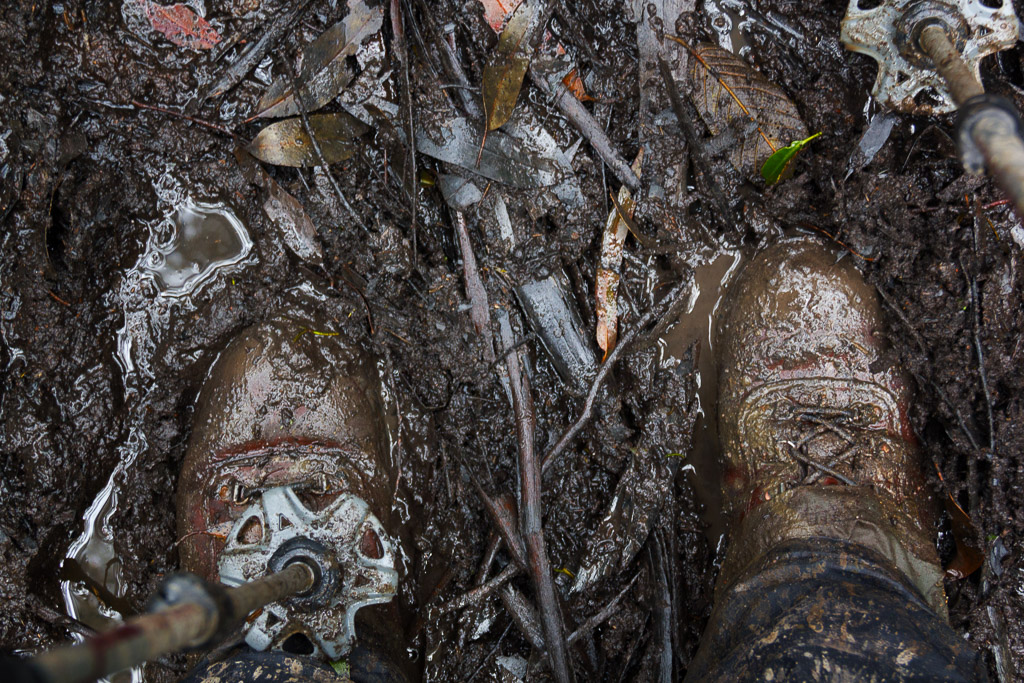