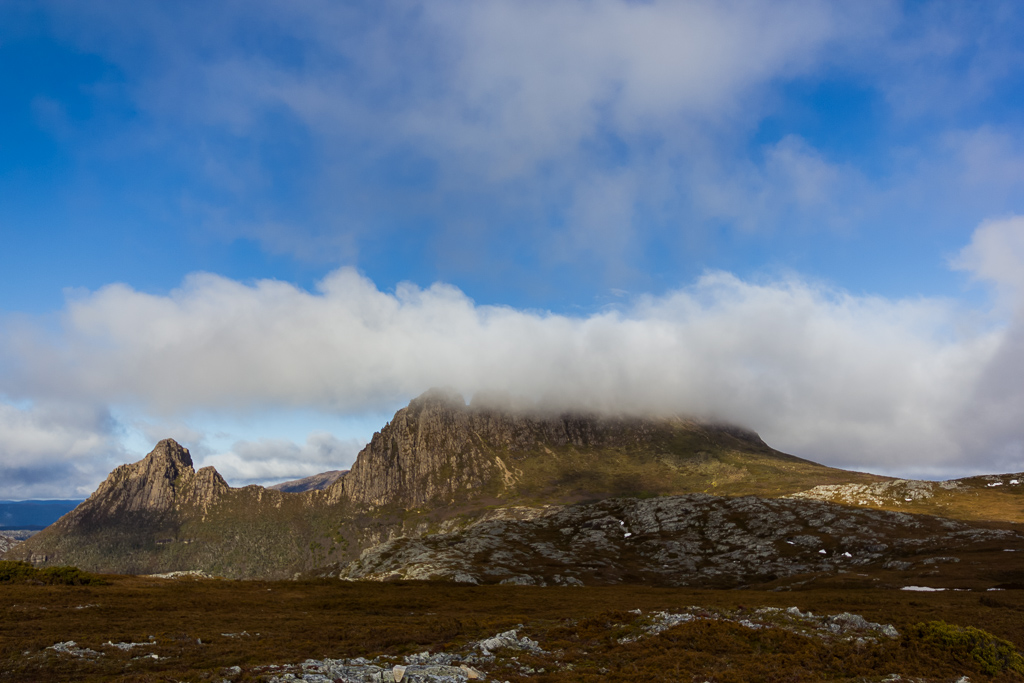 So this is it. The last day. It was now eight days since we’d started at the Walls of Jerusalem, but with half a days walking ahead, we’d finally be finished. There was just over 11 km from Waterfall Valley Hut to Ronny Creek via Cradle Mountain, Overland Track. It was just a matter of heading uphill to the Cradle Mountain plateau and then back down to the Ronny Creek car park. Then we’d hop on a shuttle bus that would put us out of our misery. Well, my misery as Ben didn’t appear physically challenged at all. Well, mentally he was in the Never Never, but then again I was blubbering like a baby there as well.

We packed up and didn’t check the main hut if the ‘hiking heroes’ were out of bed. I assumed they had woken up, munched on some broken glass and sprinted out leaving the door swinging on its hinges and tumbleweeds in their wake. We slowly chugged off and again Barn Bluff was invisible. Oh well, there is always next year to come back and get those nice ‘at dawn’ photos.

I was interested to see how the climb up out of Waterfall Valley would be. The reports of other hikers we met on the way were it was an ice climb! Well, for them coming down it was an icy drop. The denim hikers we met a few days earlier were still cursing the falls they had coming down on solid ice. Nothing worse than wet denim whilst hiking in Tasmania in winter! Anyway, the weather was quite mild I thought and it turned out there was no ice at all. It was a slow trundle up, as I stopped to take photos of clouds. Ben again had vanished into the distance. 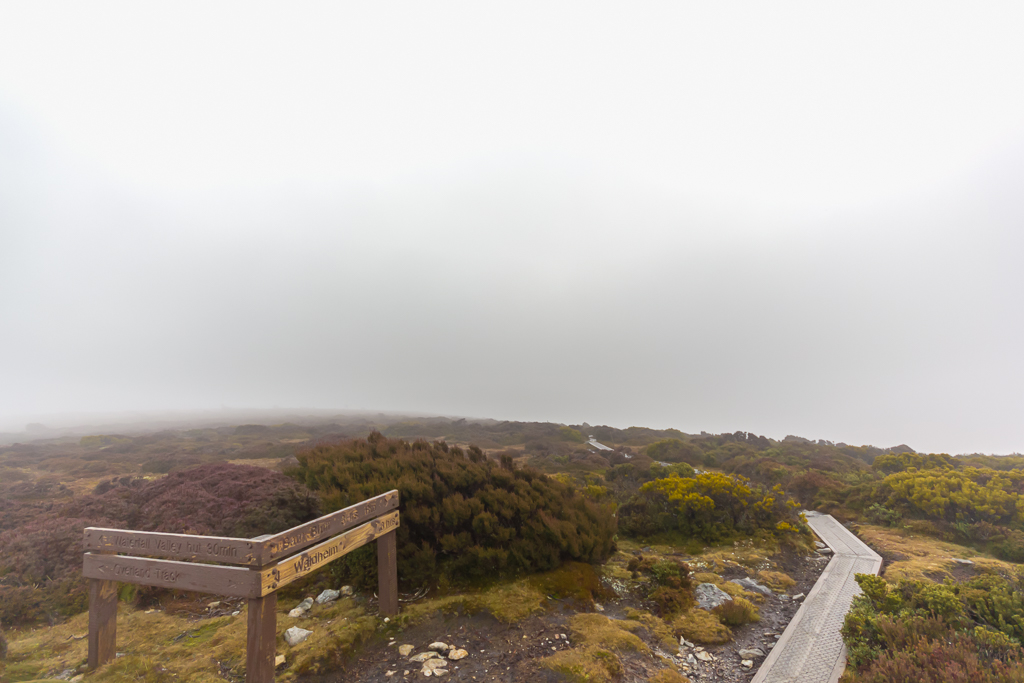 Barn Bluff is out there. Somewhere.

When I hiked across the plateau the previous September there was a lot of snow. Well, this time there was none and it was a bit of an anti-climax! The ground certainly looked different. There were rocks everywhere, which I didn’t notice last time. 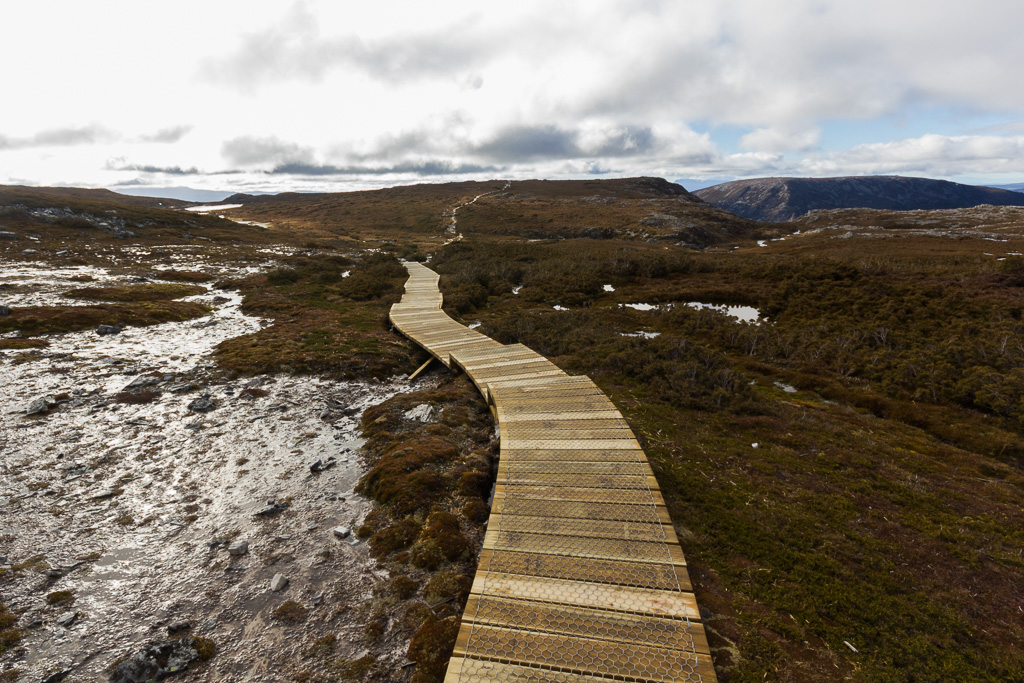 I was hoping to see a bit of last minute snow, but it wasn’t to be. Cradle Mountain was covered in cloud and I didn’t really get a good photo of it at all. I did catch up to Ben at one stage and we met a solo hiker from Sweden/Norway/Finland/Not Sure.

He’d come from the Scott Kilvert Hut and said 11 people were there the previous night. It seems winter does attract quite a few hikers and I’ve noticed it’s a lot cheaper as well. Anyway, the European bloke was on his second visit and he was possibly the most mellow bloke I’ve come across. No hero talk with him. When we said goodbye I fully expected him to glide off into the distance on a passing cloud.

We then started to meet the odd day walker. I’ve found this is the time I realize I most likely stink. Meeting someone clean after a week and it seems all I can smell on them is soap. One group I met asked me how Cradle Mountain was. I told them I couldn’t see it, so there was no real point in climbing it. They then said that they couldn’t understand why I would walk so far and not climb it. What’s going on? Is it bust my balls day? Is there anyone normal left? Besides the cloud floating Euro bloke everyone seems a little bit full on! 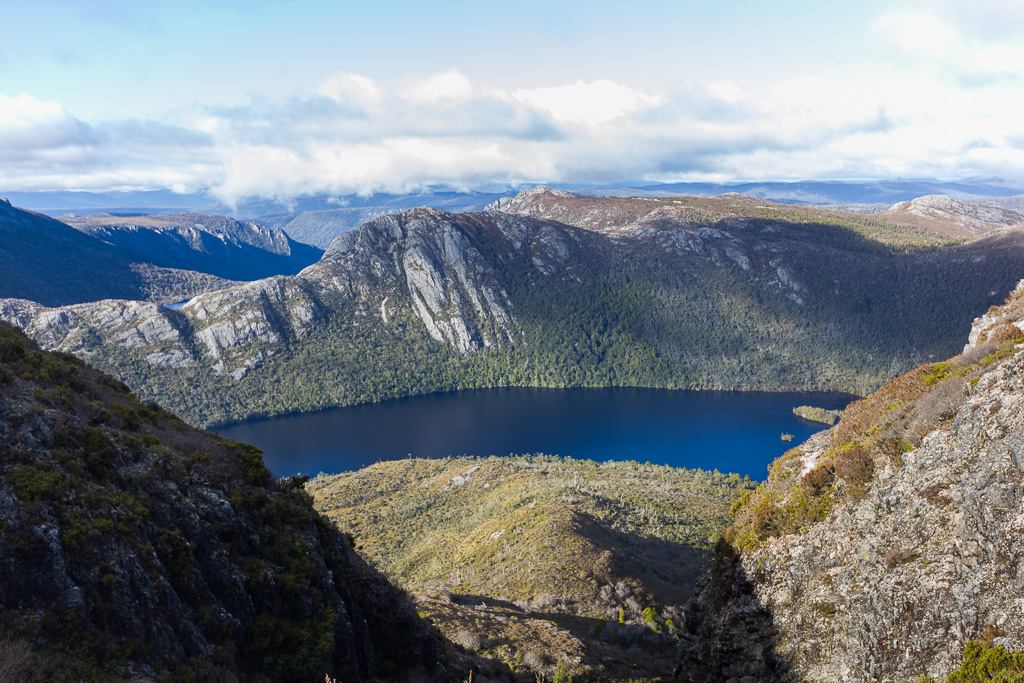 Well, it was chain time. I found coming up the chain section of Marion’s Lookout painful but not too bad the previous year. 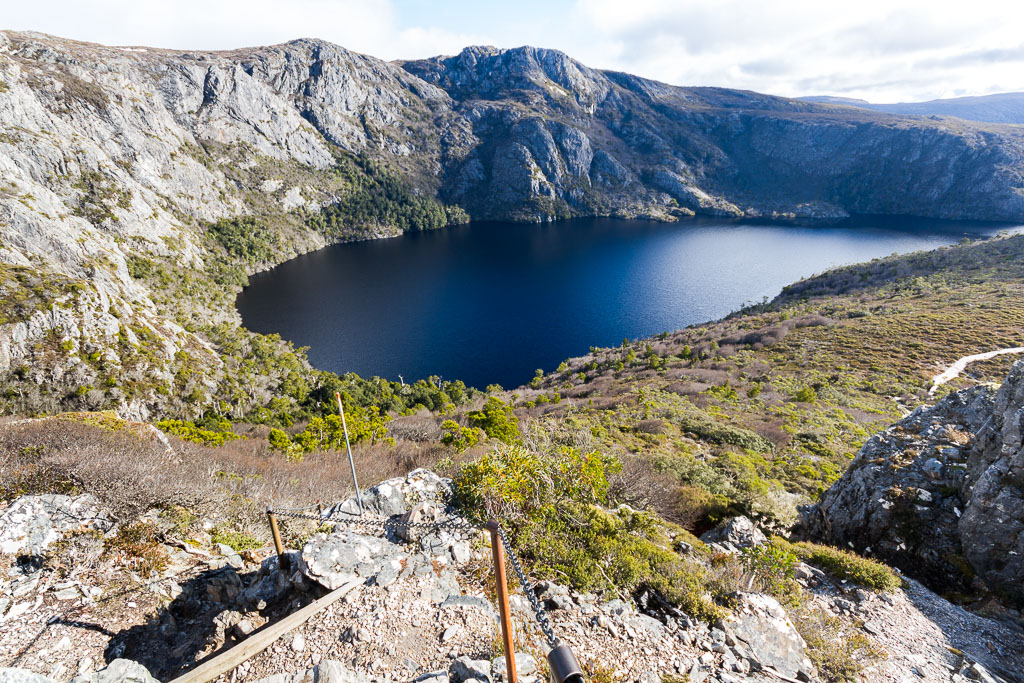 Going down was a little bit scary though with creaking knees and my general unco nature. I was very happy to get to the bottom alive. Definitely a bonus. I could see a dust-cloud in the distance from Ben powering to the finish. It was straightforward walking now and when I did see Ben at the Ronny Creek car park he was keen to inform me he’d arrived an hour earlier. Thanks for that. He also observed a family sitting at a table, blissfully eating lunch suddenly get gang-tackled by currawongs. Apparently sandwiches were lifted out of hands and children were left screaming. Nature at its finest.

It was the end! Now for the bus. We got on one and we were headed for our luxury accommodation at the Cradle Mountain Château. The Château sits a short distance from the park, so we had to walk a short distance along the road.

After arriving, we were both looking forward to a spa and massage, as it’s advertised as having a ‘Calm Day Spa’ where there are massages, mud packs etc. I was keen for all of this, but this isn’t a blog titled ‘Hiking Fiasco’ for nothing. Upon checking in I asked and in reply received, “Sorry, the spa’s are closed for renovations.” Yep, feel my pain… 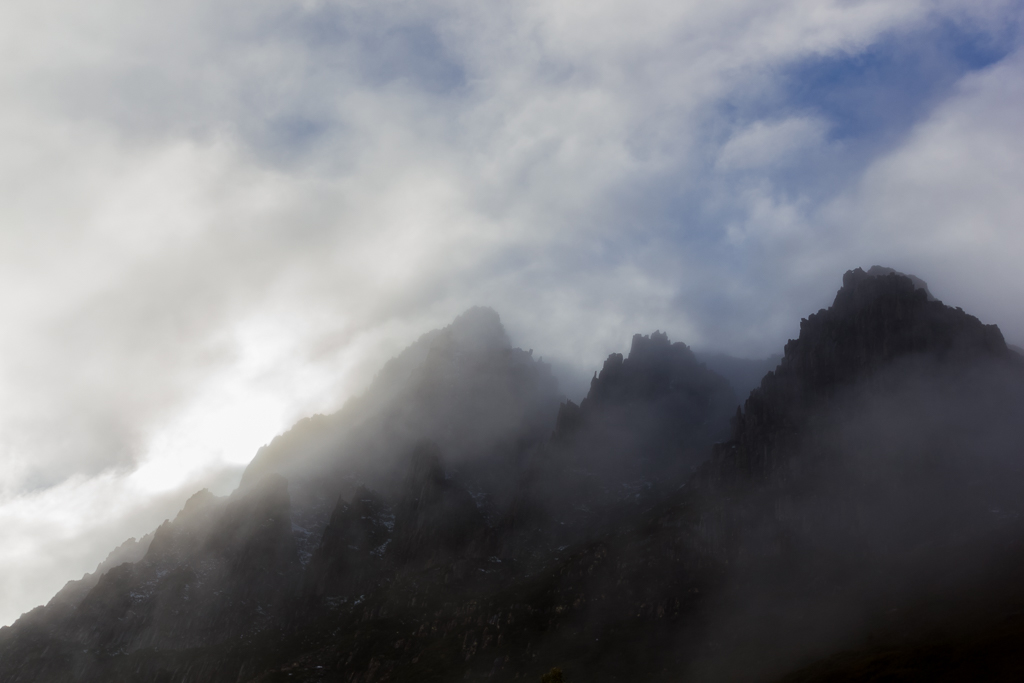