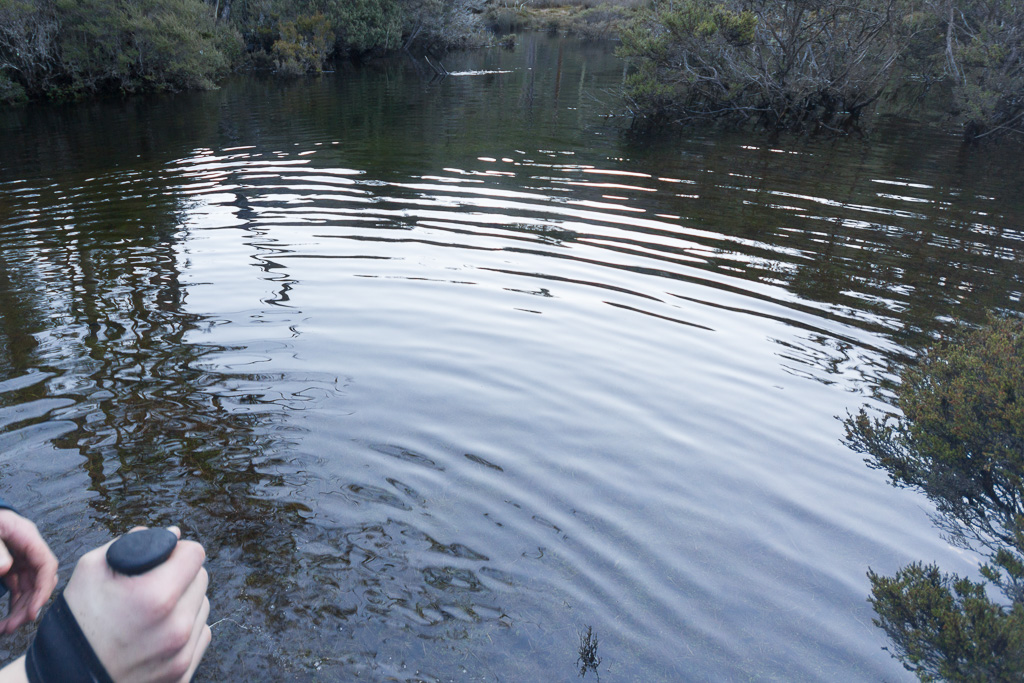 As you can see by the photo above, it was interesting walking through the Never Never. First though, let’s go back to the beginning of the day.

It was a great night spent at Lake Meston Hut. A nice fire going had dried out the clothing and it was hard getting out of bed on a freezing cold morning. Now there was a big day ahead of us. Our aim was to reach Kia Ora Hut on the Overland Track, but firstly to get there we needed to cross untracked ground called Never, Never.

I wasn’t too perturbed though, as I had maps, a GPS reading and walking notes. The concept seemed easy. River on the left and we’re not lost. I thought, how easy is this hiking business?

We didn’t get going until 10.00 am, which was a bit of a tactical error considering what happened at the end of the day. In hindsight, this is one day where we needed all of the daylight we could get. We set out in fine, cold weather, heading for Junction Lake Hut. The walking was pretty easy and we were taking our time due to the many frozen puddles along the way, which made for great photo opportunities. 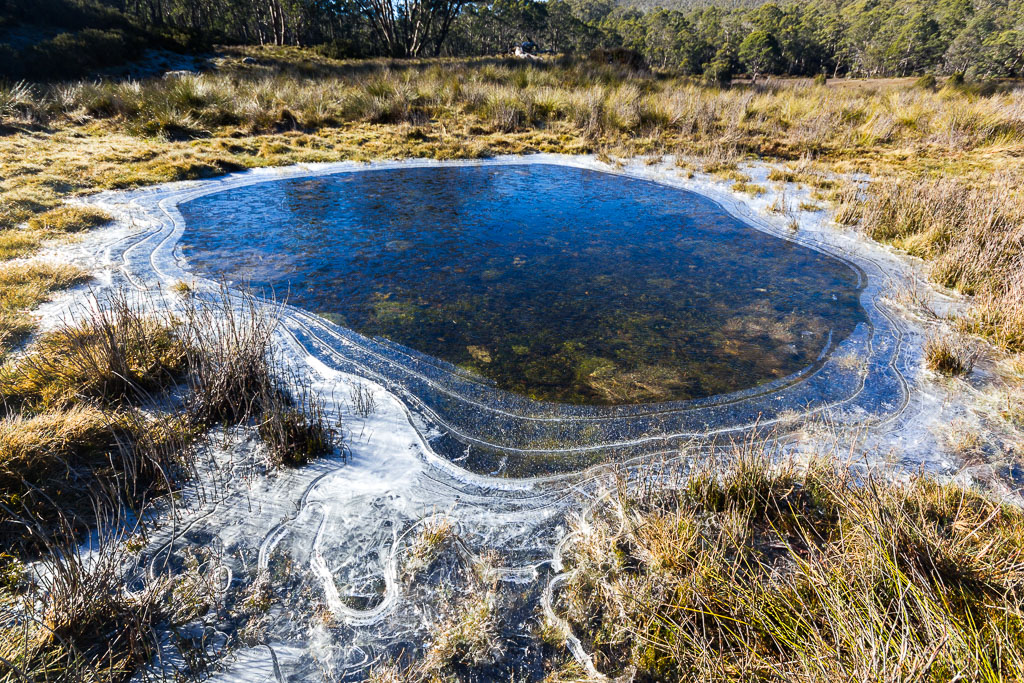 There were quite a few small streams where the splashing water had frozen on the surrounding grass. Stop for a photo? Well, of course we did. 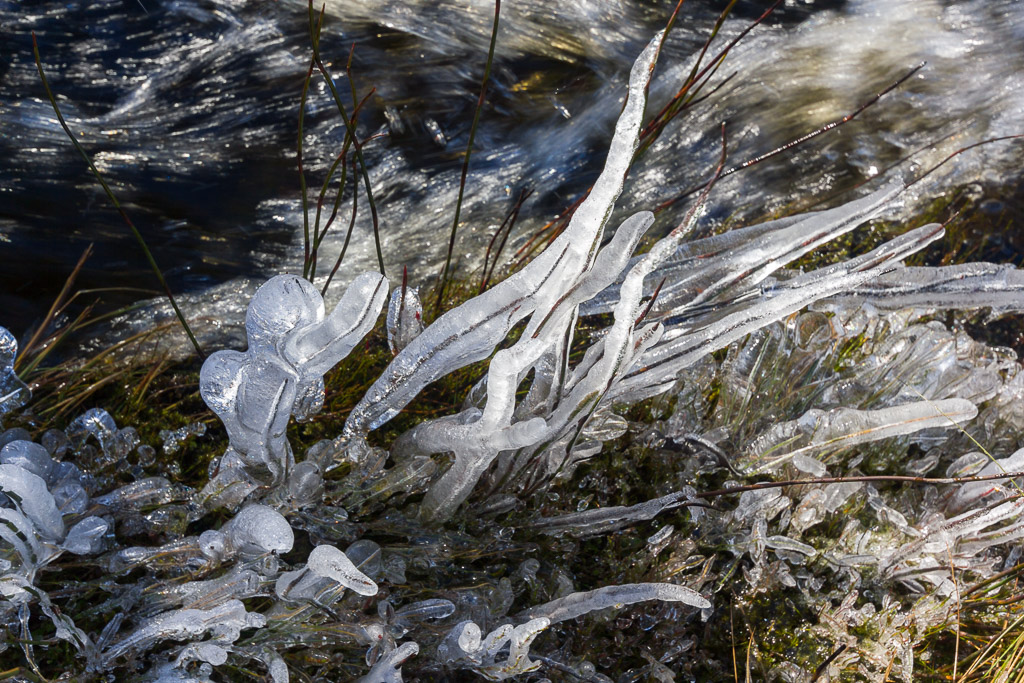 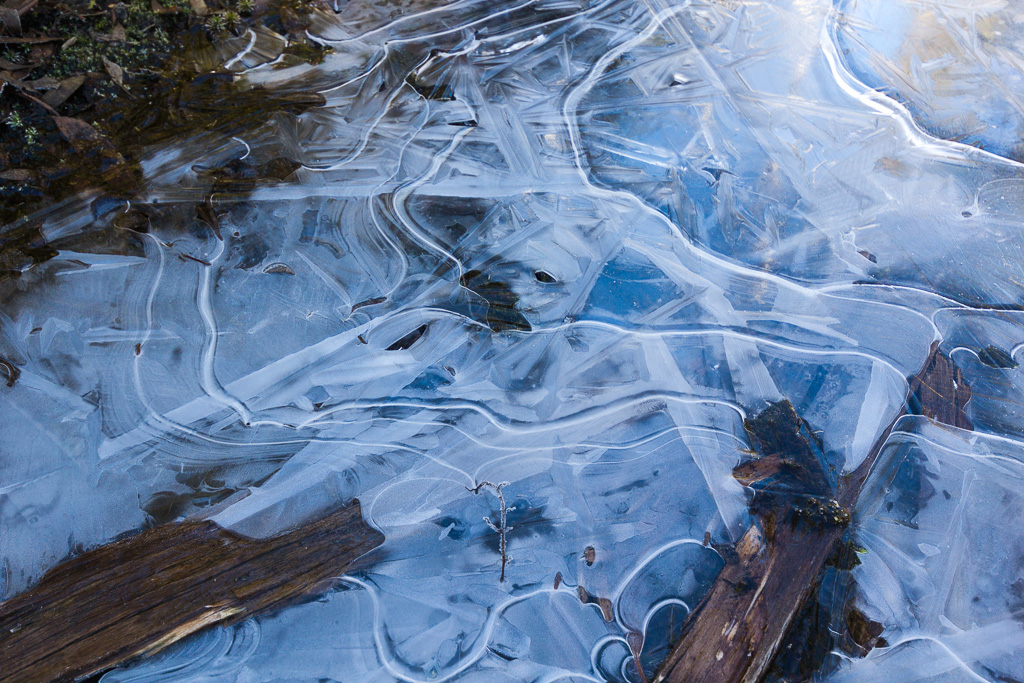 I was interested in seeing Junction Lake Hut, plus it seemed like a good spot for a break and snack. I should have taken more attention to the rough track and pads though, as one we were following came to a dead end. On the wide grassy plain, we commenced walking around looking for where it might restart. 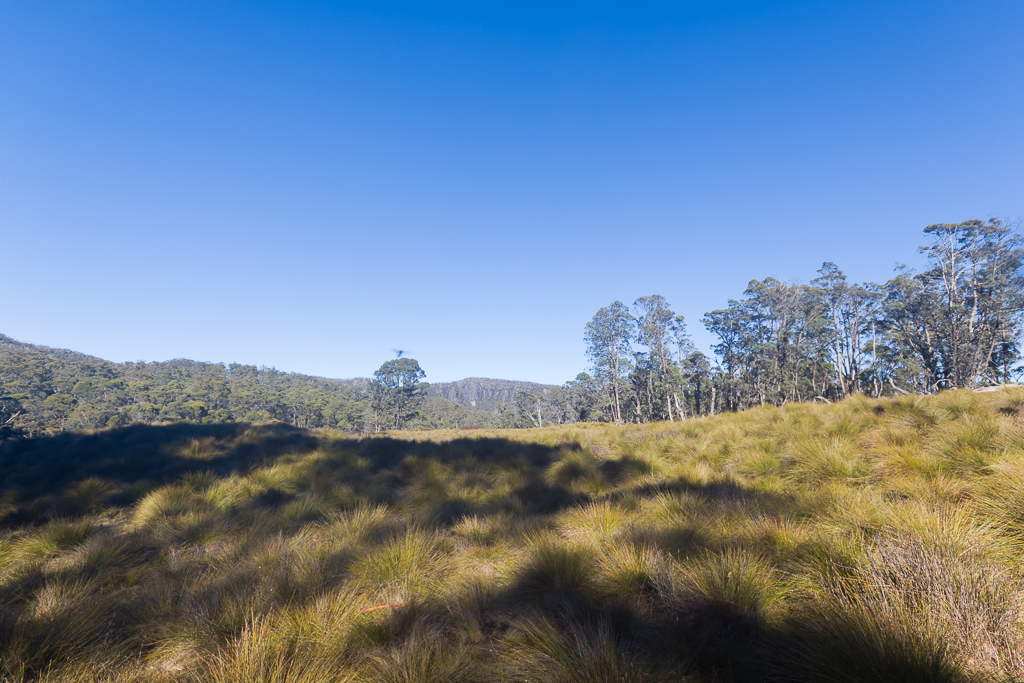 The track is here somewhere. Maybe.

Well, okay, we didn’t find it and it felt like we were walking in circles. It probably looked embarrassing on the GPS read-out, but after stumbling about, including a nice, solid fall by myself in which I cut my forearm, we found the hut. Again it was great and very similar to Lake Meston Hut with bunk beds and an open fireplace. 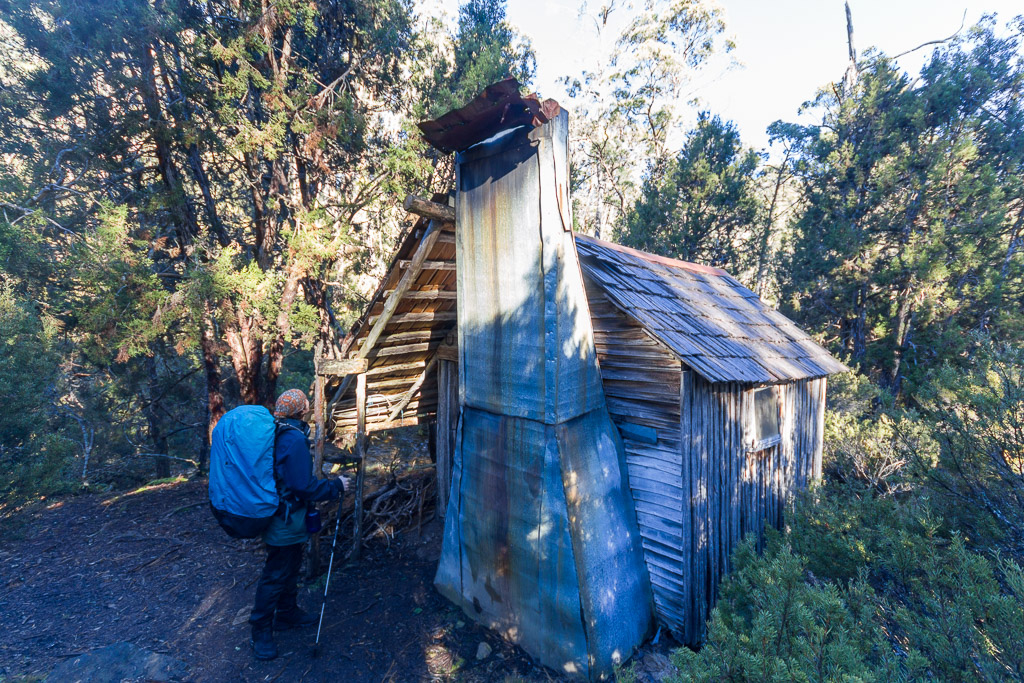 It was time to put the feet up for a little while and also a chance for Ben to bandage a leech bite on his arm that had a good blood flow coming out of it. By now it was early afternoon and I checked the intentions book within the hut. I was a little disturbed to read that someone a few days earlier had tried to walk across the Never Never, but the Mersey River was too swollen and too hard to cross. I had the GPS reading for the location of a log that can be used to cross the river. I was hoping the bloke who turned back just didn’t know where this log was, as I wasn’t in a ‘turn back’ mood at this point.

It was a perfectly clear, chilly winters day and Junction Lake looked fantastic with its smooth surface and quality reflections. 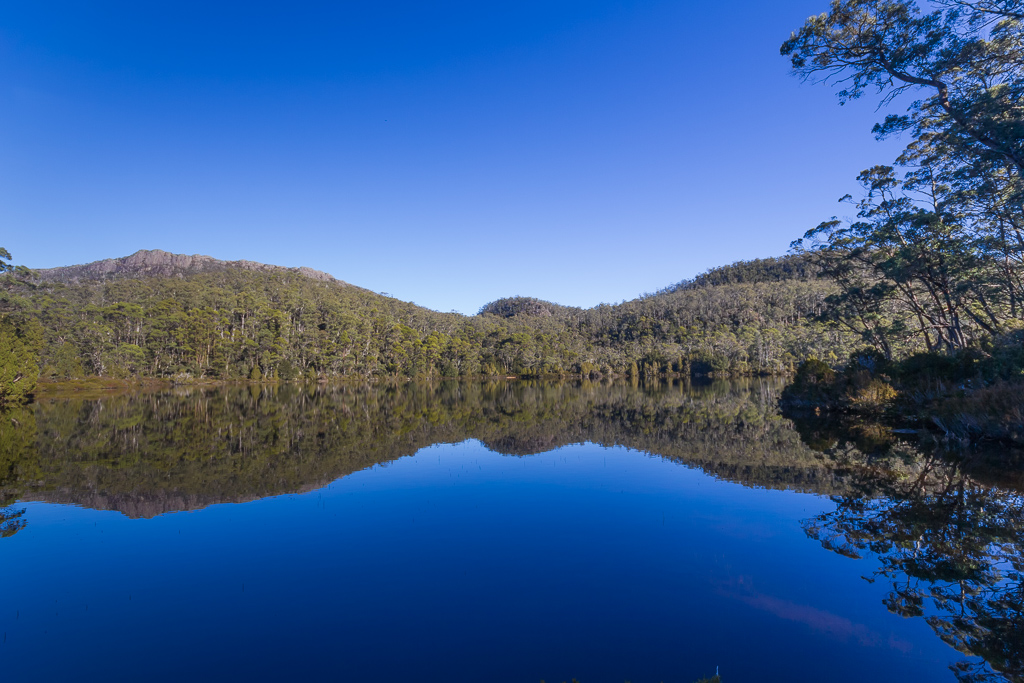 Now, it was time to head into the untracked section of the Never Never. We came across a Parks intention book within a box and filled it in, whilst noting that the book was brand new and there was only one other entry in it. Okay, this place is rarely walked in winter, that’s for sure. A bit more walking and we found ourselves in scrubby forest. The direction wasn’t clear, but with the Mersey River to our left we stumbled around until we found a rough pad again. 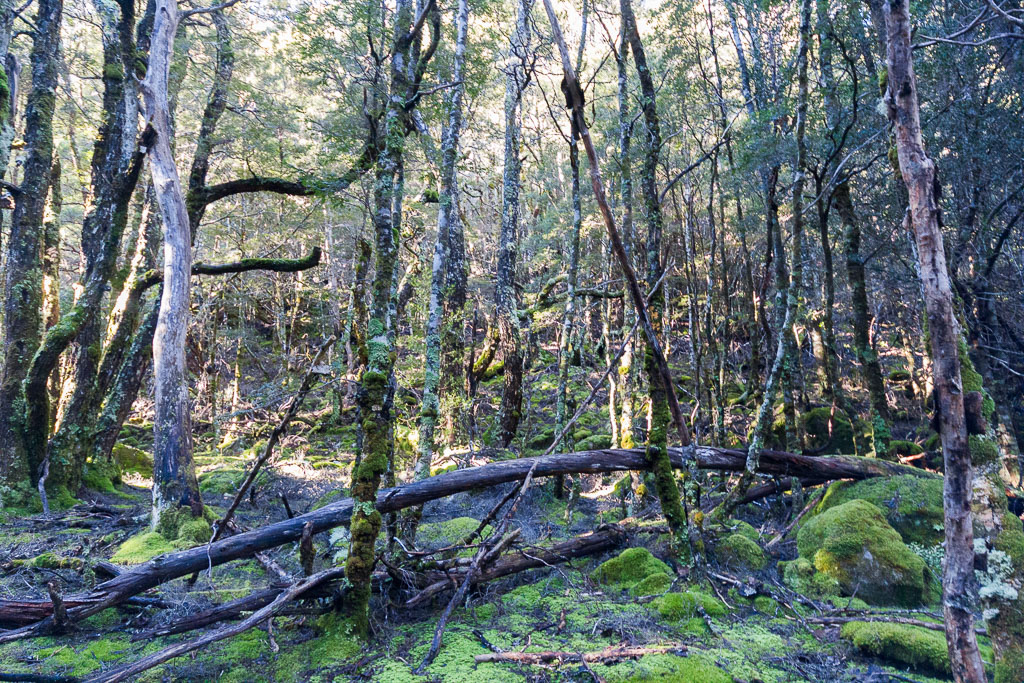 Forest in the Never Never

In this section of forest we came across an orange track marker and began to think things were going to be a bit of a cruise. Actually, that was the one and only track marker we saw for the rest of the Never Never!

We exited the forest onto grassy plains that made for some pretty tricky walking. What looked like a solid surface would actually give way, and the only way to make some headway and not sink into the ground was go for the odd ‘sprint’. This sort of worked, but it made for some heavy work on the lungs. Any area still in shade was covered in frosty, frozen grass. 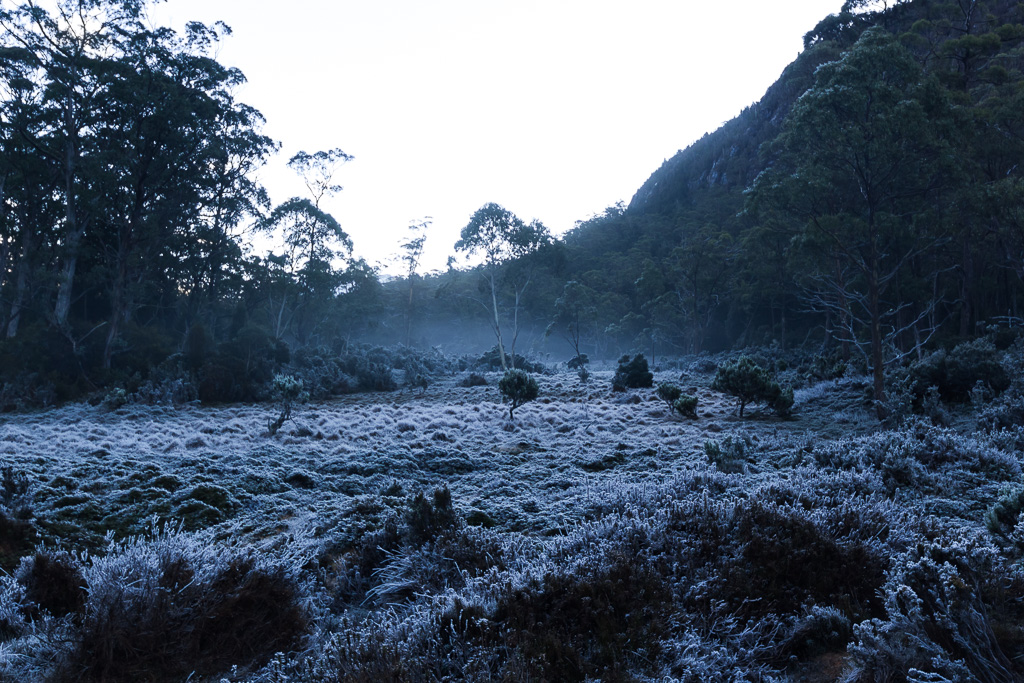 Progressing along, we soon found out that trying to keep near the river was a mistake. We bashed our way through some annoying scrub and promptly exited into a vast section of water. The river was swollen and it covered all of the ground we intended to follow. It didn’t help that we were hemmed by bush on one side, so there was no choice, but to walk through the water which was up to knee deep in places. 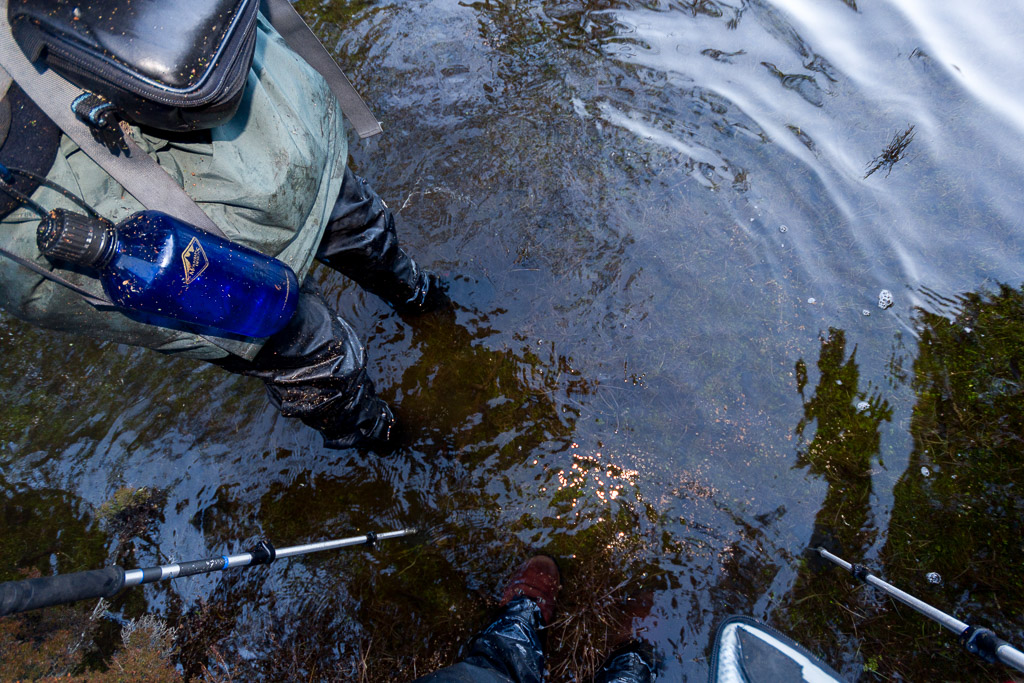 This was disappointing as my boots were now feeling slightly ‘damp’. Seeing this expanse of water was making me worried now about how to cross the river, but it was a matter of pressing on to where the log was and hoping for the best.

It was funny at first, but the good times were rapidly diminishing with boots full of water and sections of trees that were insanely difficult to walk through. It seemed every tree branch would reach out and snag the pack sending me off balance. At one point I was on hands and knees and I was sure I was moving faster like this than walking. I have never fallen over so much in one day. Ever! I counted at least 10 solid falls, but Ben was happy to correct me and say it was 13 times. At one point I fell over and landed with my legs above me in a tree. It’s hard standing up again with a pack on when the feet three feet in the air. 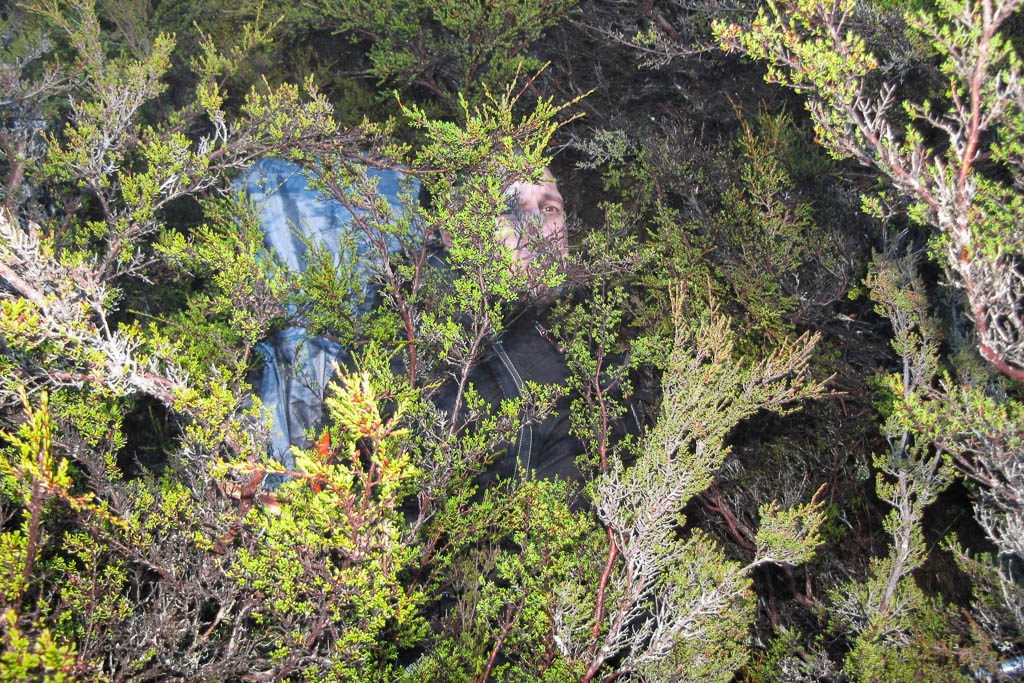 Standard position of the day. Flat on my back in a tree.

Ben helped me up, but as I did so I fell forward and cleaned him up. Now we were both lying at odd angles in the bushes. 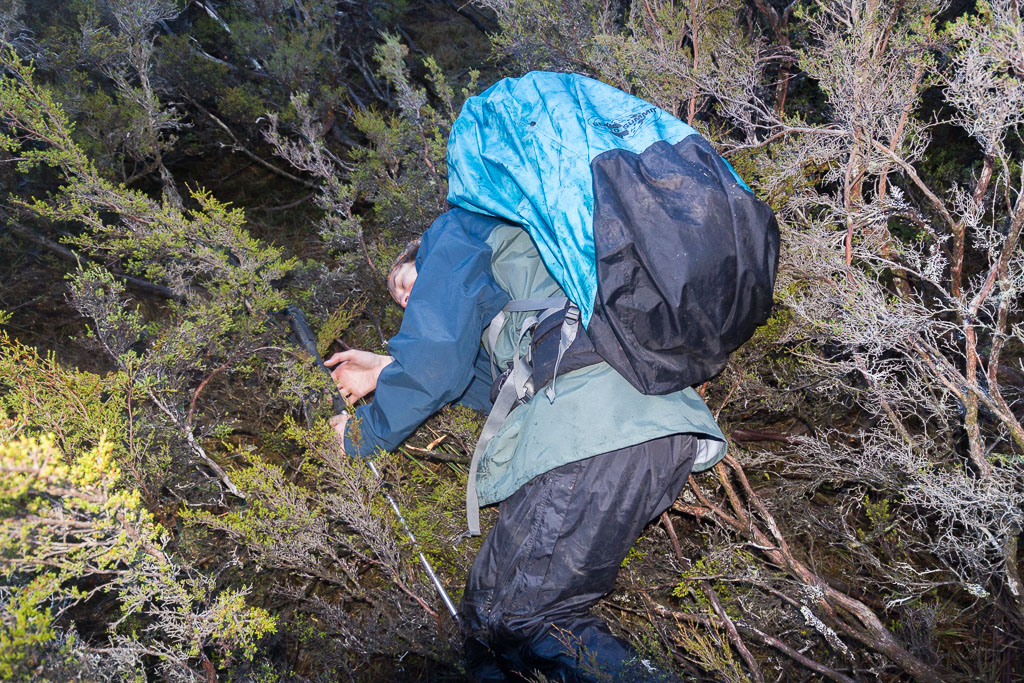 Oops… I knocked him over as well

Gee, this hiking is fun isn’t it? If it wasn’t trees snagging us, it was the soft ground where a foot would vanish in perfectly solid looking ground up to the knee. It was slow going and already the sun was getting low in the sky. Early darkness was a worry, so it became a matter of bring on the bloody log!

We reached the position on the GPS where the log should be and we were certainly glad to see it was still there. It was above the water, which was also a bonus. The water looked quite deep and was fast moving, so I didn’t want to fall off the log. It was covered in branches and wet and there’s no way I could cross it on my feet and survive. 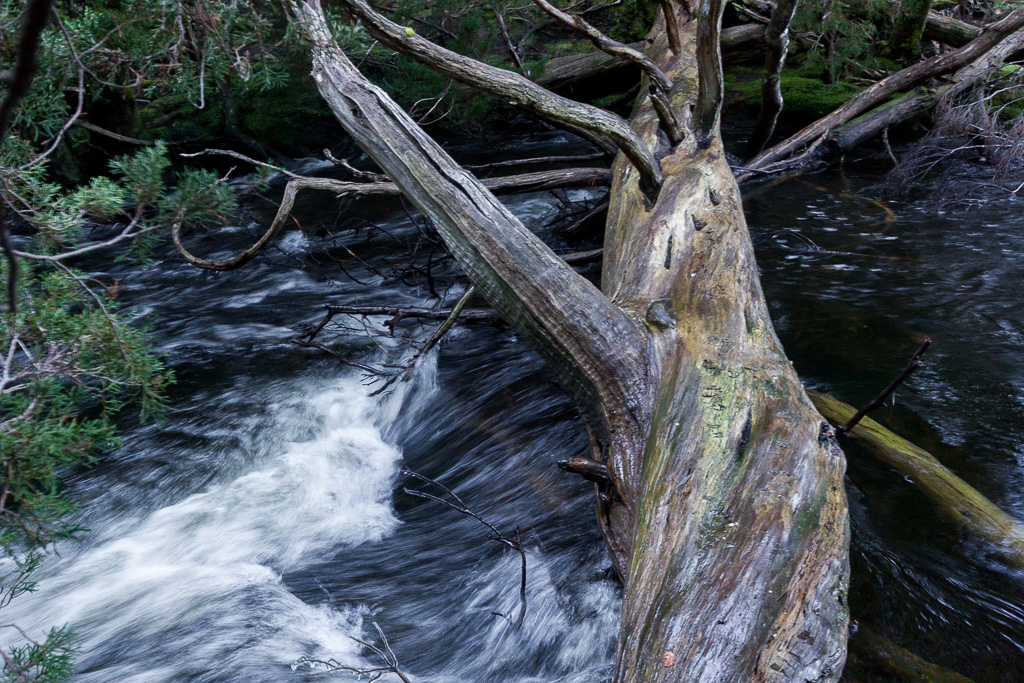 I elected to go for a straddle approach, which was ‘slightly’ gymnast like, as I had to do special leg swings around the branches, as if I was on a pommel horse. I made it to the other side and I was impressed to arrive with my testicles still attached as well. Ben was next and he used the same method, but decided to show off by getting across with the walking pole in his mouth. Full marks for originality.

Now safely across the river we were thinking it should be a bit of a cruise to our destination of Hartnett Falls track. This track would lead us to the Overland Track, but by now the light had faded and it was hard to pick anything out. On went the headlamps, but they’re no substitute for natural light when looking for a rough track. Again we were belting through trees and not really finding any opening to get moving properly.

Apparently there are the remains of McCoys Hut along there. Sure, it may be there somewhere, but we didn’t see it! In the pitch black I probably walked right through it. I was lucky to have the Hartnett Falls track on my GPS from walking on the Overland Track the previous year.

At one point it was telling me the track was only 100 metres away. Surrounded by towering scrub and going nowhere fast I asked Ben if we should just be he-men and go straight for the track. Ben was of the opinion that we were he-men, so I ploughed on. I walked about three steps into a tree that appeared to grab hold of me and throw me back where I came from. I was now lying at a weird angle on the ground with a feeling that the tree was telling me, “No short cuts for you!”

So, we headed back to near the river and found it no easier. We must have sounded like two wild animals groaning and cursing with trees shaking all around us as we stumbled on. After some more bashing we reached a point where the GPS indicated that the Hartnett Falls track was only 8 metres away and that seemed barely believable as the scrub blocked any vision. In the end I placed total faith in the GPS and went mental, belting through trees until suddenly I fell into a piece of open ground. It was the track. I was on my knees with my hands pointed to the sky saying, “I’ve found the track you beautiful bastard!” It was an emotional moment.

Now we were off, powering up Hartnett Track in the dark and I was glad to see the signpost for the Overland Track. Ben was feeling delirious at this stage and had to stop for a snack. It gave me a chance to clear a few leeches off my arms and re-arrange what felt like 25 kg of bark that was down my back between my shirt and pack. This was causing some quality scratching and made me long for a nice hot shower.

We continued until we reached Du Cane Hut. Although this is just an emergency hut, it was the end of the road for us for the night. It was 8.00 pm and we were both wasted. We were both a little spun out mentally by the last few hours and found it hard to sleep whilst reliving the trauma. It had been 17 km of madness and mayhem on the short winters day from Lake Meston Hut to meet Du Cane Hut via Never Never, Tasmania. We weren’t at the spot I’d intended in the morning, but at least we’d made it to the Overland Track in one piece.

Now it was time to get some rest. Firstly though, I needed to listen to a bit of music and ‘Colony’ by Joy Division was the perfect song to unwind with… 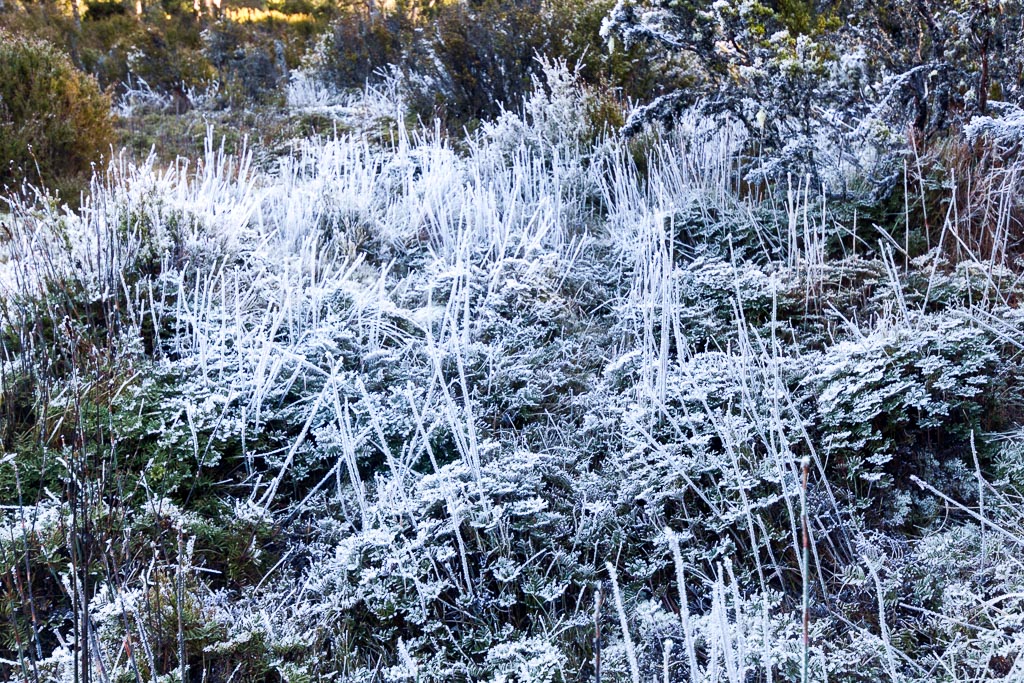 Frozen grass in the Never Never