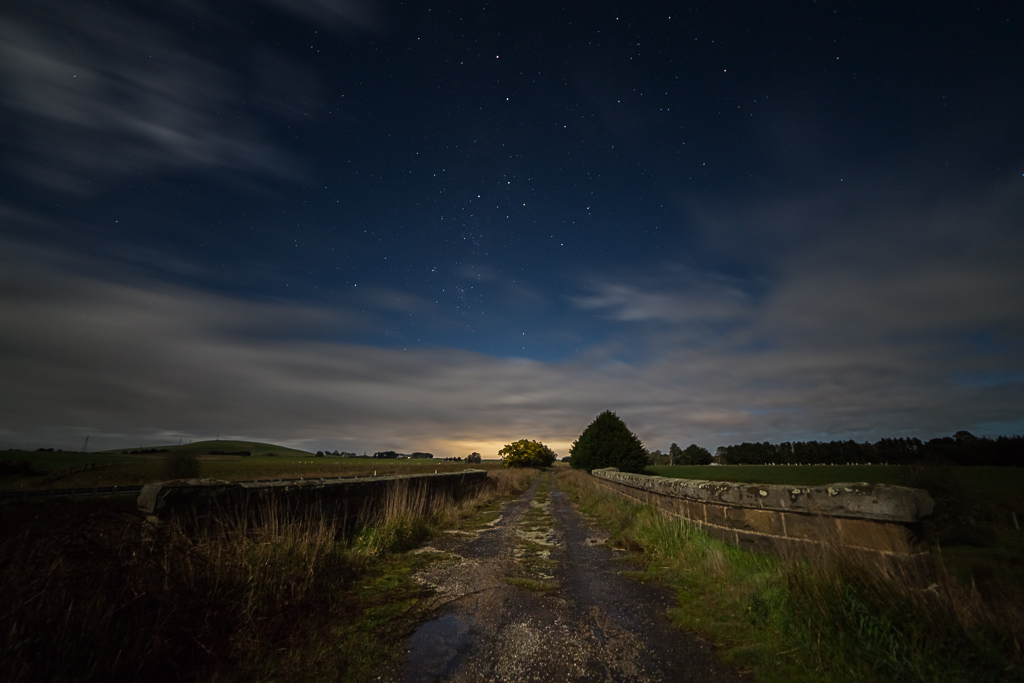 I must admit. The last entry was slightly bonkers, but at least it had something going for it. A fairly interesting topic and most importantly, an actual name. Unlike this post. Langdons Creek Bridge? Sounds official? Well, it is now, as I’ve just made it up. Yes, currently there’s a bridge over Langdons Creek in Blampied, but stuffed if I know if it has an official name. Before I go anywhere with this, I’ll sneak in one of those infernal SEO sentences and get it over with now.

Langdons Creek Bridge, Blampied, Victoria is an old bluestone bridge that sits on the A300 Midland Highway, between Newland and Eganstown.

Now, where were we? Oh yeah, this was another grand idea, which often goes no further than a mouldy draft, before never seeing the light of day. I’ve started it though, so I might as well finish it. Also, it was a bit labour intensive, so it became a difficult post to abandon. As to expected in this joint, a simple story about a bridge in Blampied turned into something way more difficult than I envisioned.

It all began when I was driving to Daylesford one day. Gazing out the window, an old bluestone bridge caught my eye as I whizzed by. I’m sure you’ve all seen something similar during a country drive. Not just in Victoria, but Australia is full of old bridges and roads that have long been bypassed. I’ve always been intrigued by these things. No, I’m not worried about whether it’s classed as notable bridge or structure and it also doesn’t have to be the biggest or best. It’s more a case of viewing something, which time has passed by. More on that later.

Sometimes these old bridges are well off the new route and often inaccessible. This one wasn’t though and just to top it off, it looked quite impressive with its couple of arches. Over the years, I’ve seen similar bridges and always think, ‘I must stop and look at that one day’. Then of course, I never do. Hell, if you want to get really ancient, I wrote a post in 2010 about a similar bridge that’s been bypassed by the current highway. Djerriwarrh Creek Bridge. I’m not joking, but it took over a decade of driving by that one before stopping to have a look.

Passing through Blampied for about the fifth time, I spotted the bridge and pulled over. I must be getting better. Instead of 10 years, it was only a matter of months before stopping for this one. Now, what did I find?

I wandered across the bridge, looking at the sides for a plaque. Finding nothing, I headed down for a side-on view. Braving the weeds, I got a bit closer. Mind you, this is a winter inspection. If it was summer, I’d be panicking about stomping on a snake in the long grass. 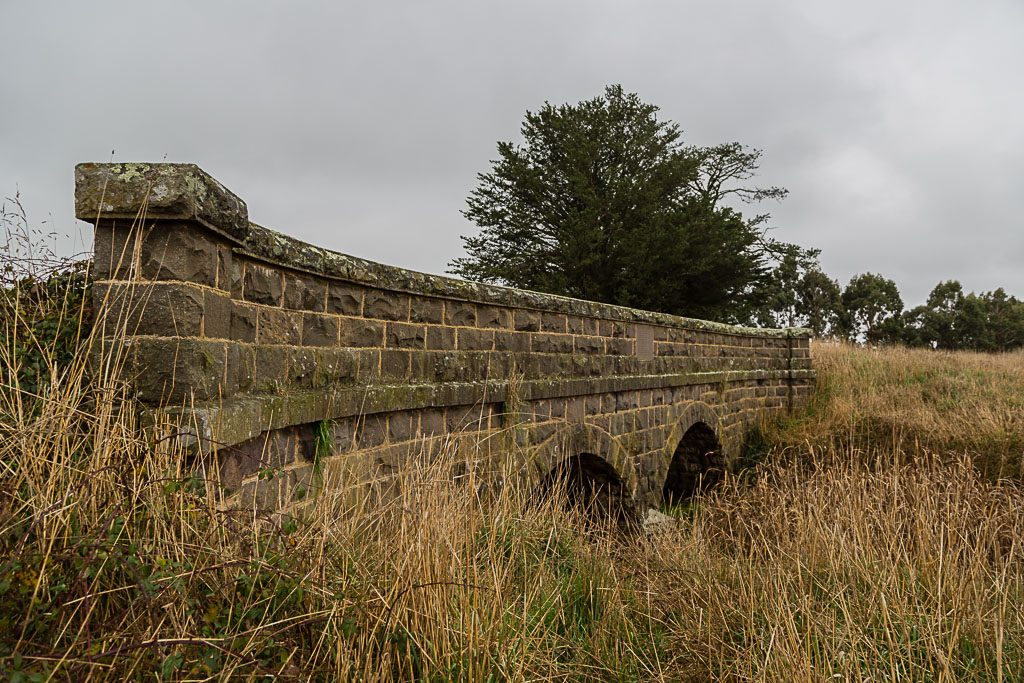 This closer look revealed a few things. Firstly, I’ve no idea why the photo is so yellow and orange. Don’t laugh, but I’ve actually taken out some colour. Literally, the original is bright yellow. More importantly though, a plaque was visible, but it was on the creek side of the bridge. Wondering about its inscription, I moved to the waters edge. 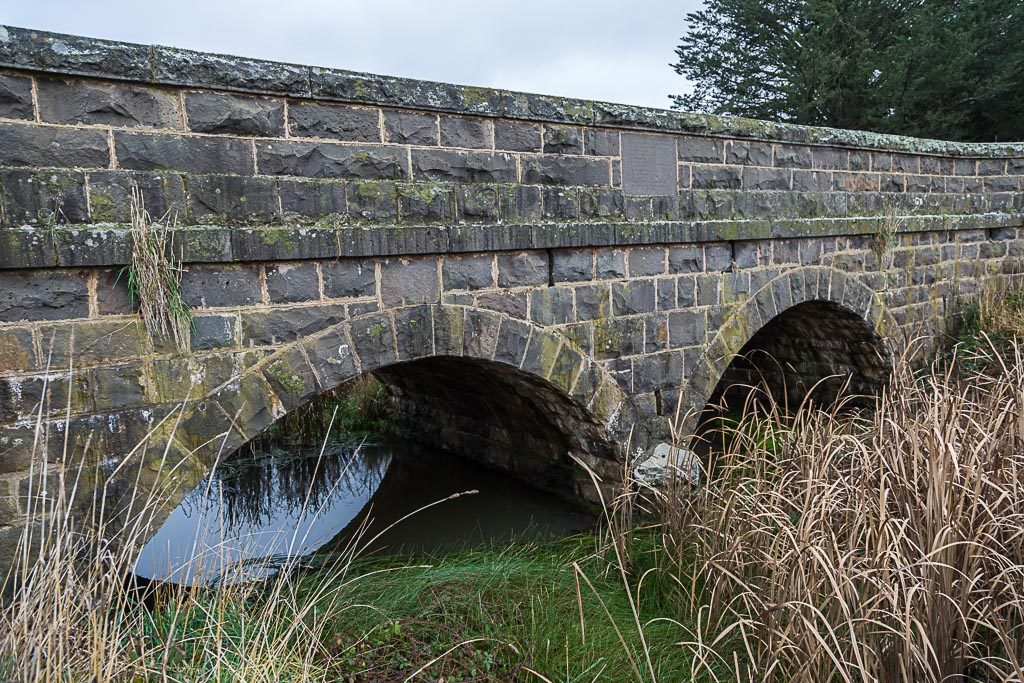 Right. Can you see my problem? At my closest position, the plaque was frustratingly unreadable. In order to read it, you’ve got to go wading in the creek. Oh, unless your glasses are fashioned from the Hubble Telescope. Stranded on the creek bank, I was full of questions.

What’s the plaque protocol? Is there one? Why is it on the outside where no one can read it? Wouldn’t the inside make more sense? Why am I overthinking this? If you really want to know, it officially did my head in, so I was forced to retreat with no answers.

Feeling defeated, it was time to head home and regroup. A revisit was definitely in order though and this time I was going to bring some reinforcements. I was committed to solving the Great Plaque Riddle of Blampied.

It wasn’t long before I was back, but this time I was serious. 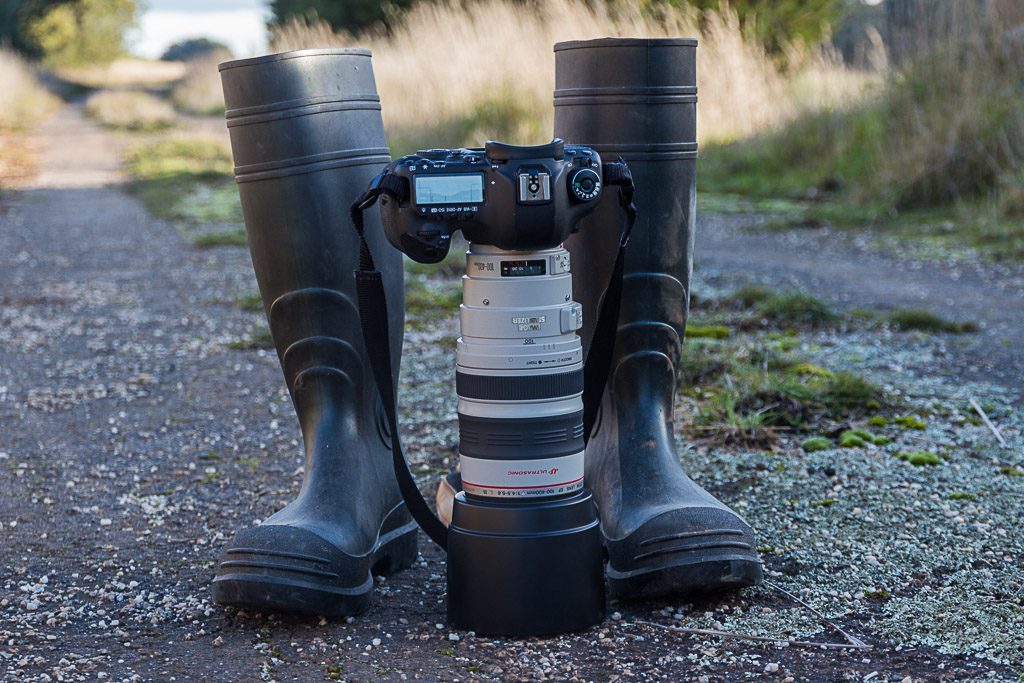 Arming myself with some sweet rubber, I was soon stomping down through the long grass next to the bridge. Between visits though, there had been a bit of rain, so the creek had a bit of water in it. 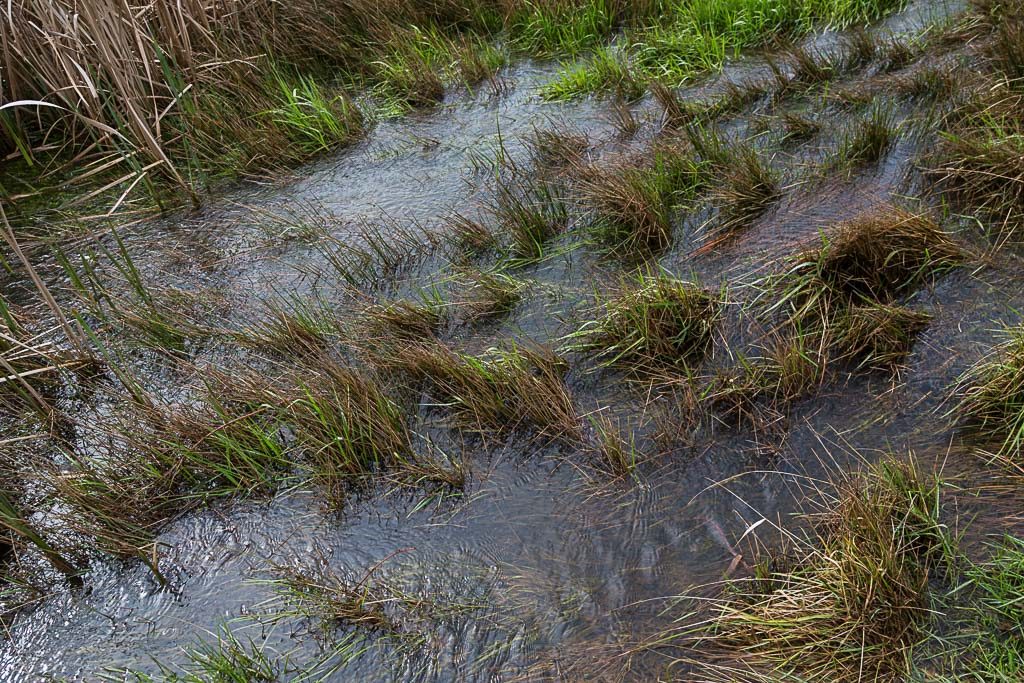 Okay, it’s best to clear this up now, so you don’t think I’m a complete wimp. No, I wasn’t worried about being swept away by a foot of water. I was more concerned about ‘gumboot water level’. I didn’t want my rubbers filled (is this sounding saucy?), so I precariously headed into Langdons Creek. 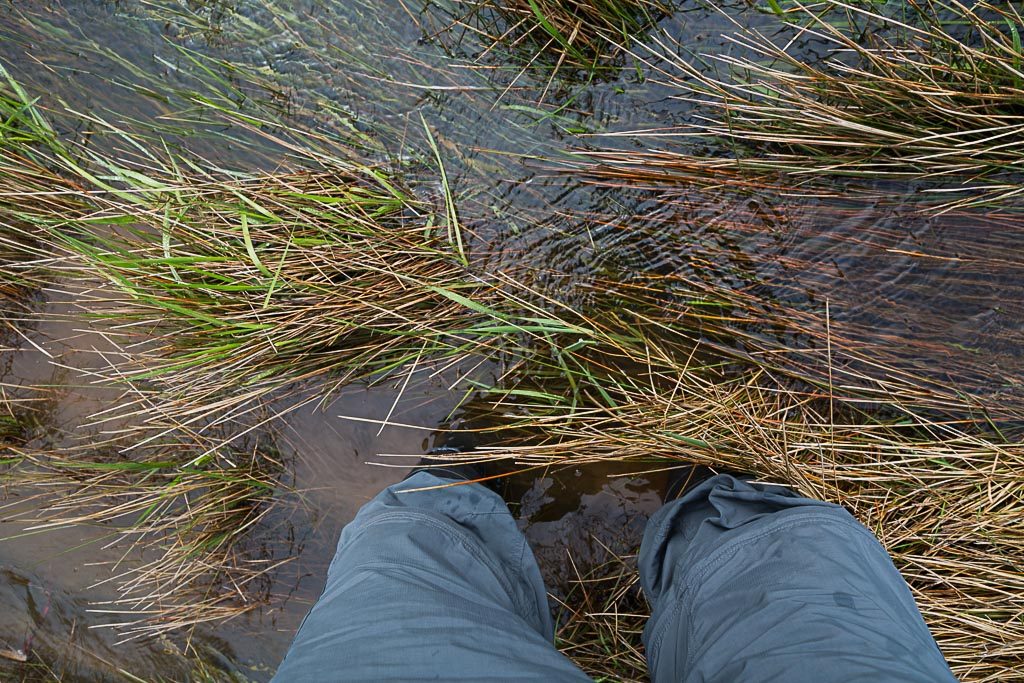 Wading out, I battled some annoying glare… 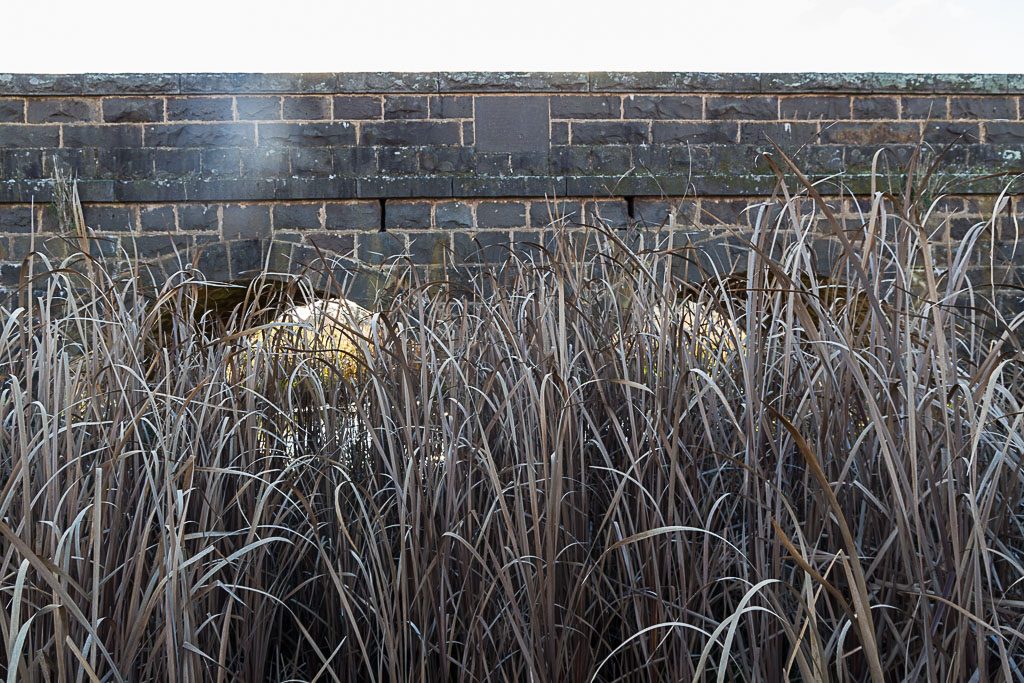 …before centering myself in front of the plaque. Zooming in, we now have the following for the world to read. 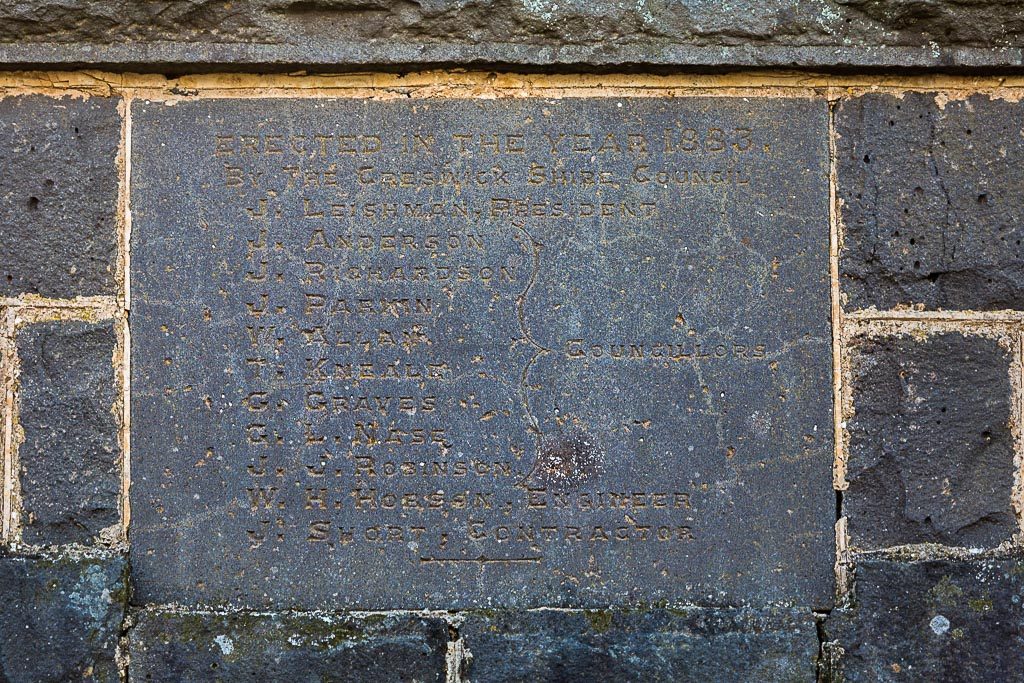 Actually, can you read it? Even now, it’s a bit hard, but for prosperity it says the following (I think):

So there you have it. A couple of things caught my eye. 1883? That sounds quite old to me. I thought there might be some mention about it online, but alas, there’s nothing. Oh, another observation was names starting with ‘J’ were a popular choice. Not to be outdone and to get one up on all the other ‘J’ blokes, J.J Robinson went for the double. It’s a nice touch.

Is that it then? Oh no, there is a bit more to come. Wading back ashore I stood back and pondered for a while. What was it like for these people in 1883? I guess they would have been quite proud of the little bridge and having their names inscribed to it. How would they have imagined the world in a 130 years time? What might have been a bit of pride and joy, now sits abandoned and is slowly being enveloped in weeds.

Thinking of the past, I had a cursory look on the other side of the bridge. Something a lot more modern caught my eye. 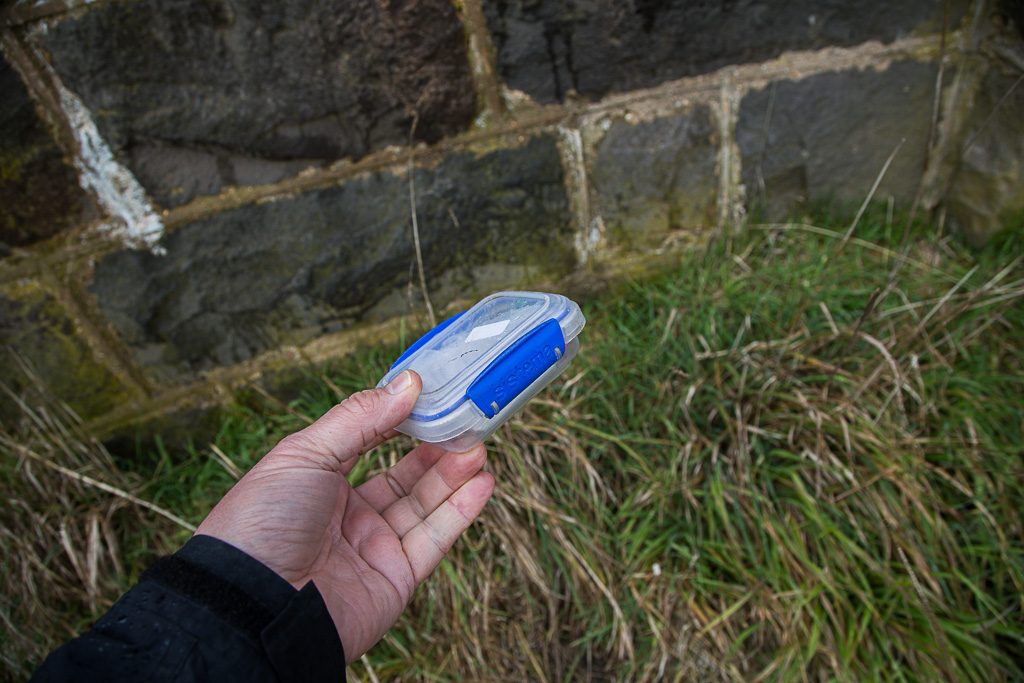 Opening it up, I read the contents. Now, I can only surmise how those blokes felt about their bridge and the 1883 world they lived in. I don’t have much to go on though. So, other than the simple writing on the plaque and their traditional names, it’s all just guesswork. Except for one thing, which I’m positive they could never have imagined. I’m confident they’d never foresee, ‘ROOTA 069’, leaving a message in 2014. 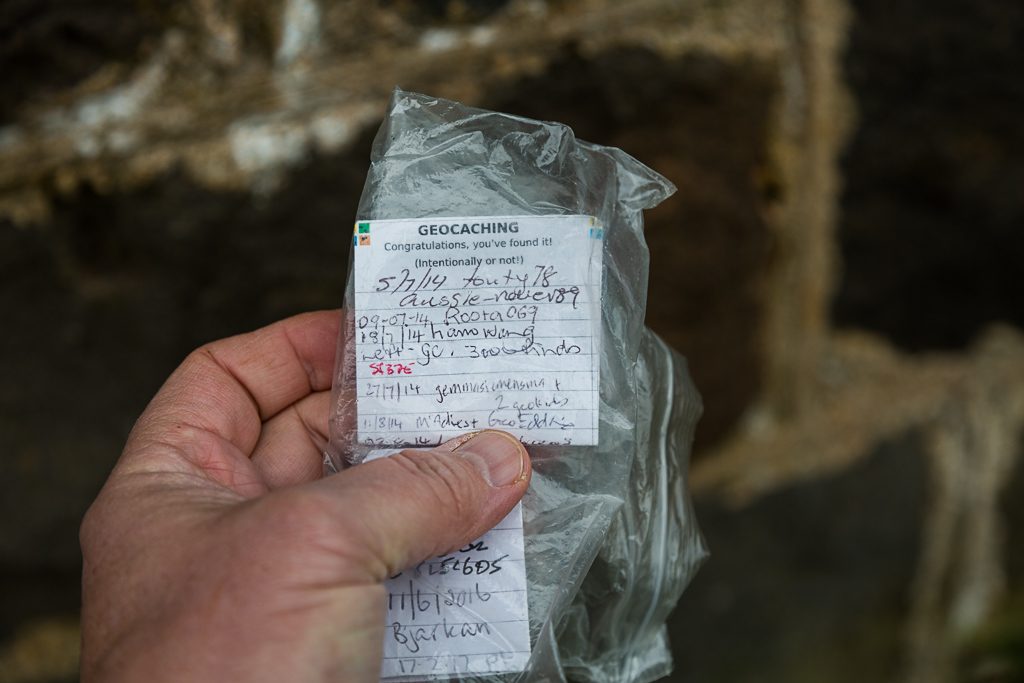 The bridge over Langdons Creek had been a wild ride, but I’d more or less achieved what I’d wanted. I can’t say it came easy though. Amongst these photos I was hit by a stupidly intense shower. Suddenly the wind picked up and pelted down rain that was striking me sideways. Look. I even took some photos of it in action. How do you capture sideways rain though? Here’s a picture of it and it looks like nothing is happening. 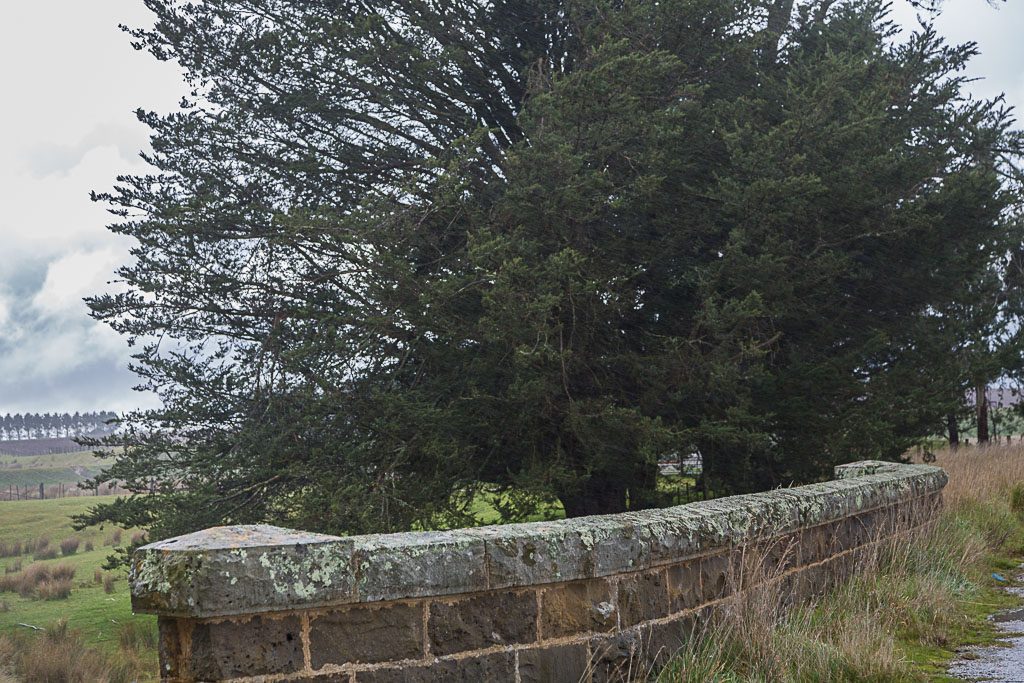 It’s only if I crop the photo above that the rain is seen. 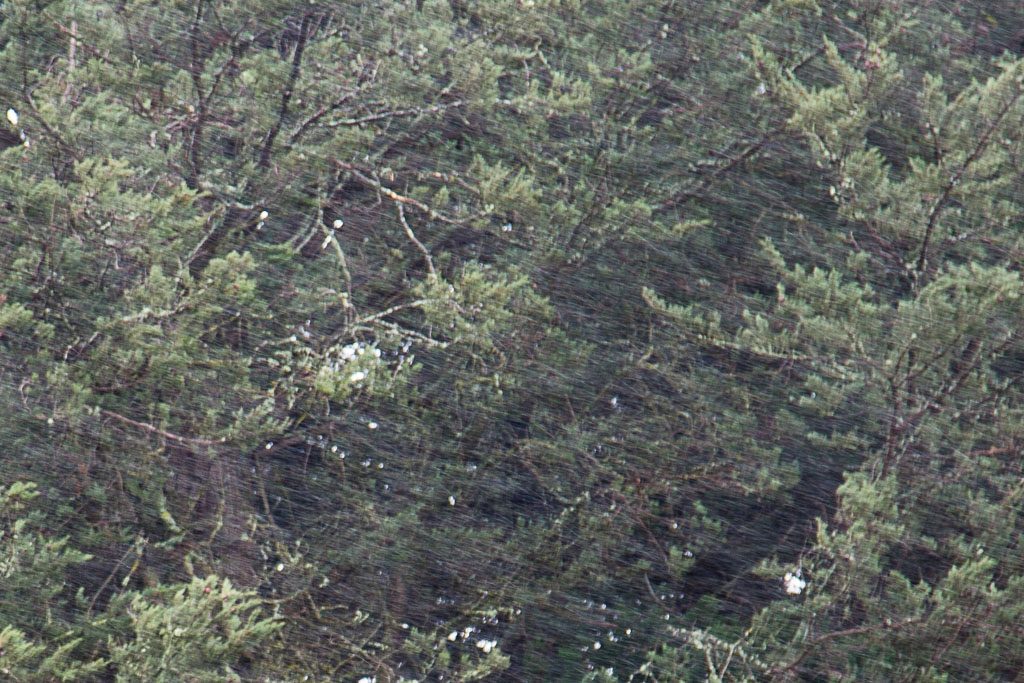 I need to do some more ‘how to capture rain in a photo’ research. Lastly, as you can see from the opening photo, I did go back at night. Like 90% of my night shoots though, grand plans of how something will turn out, ends up as a bit of a dud. Firstly, I had to battle the moon, so all it provided me were photos where it just looks daytime. But weird. 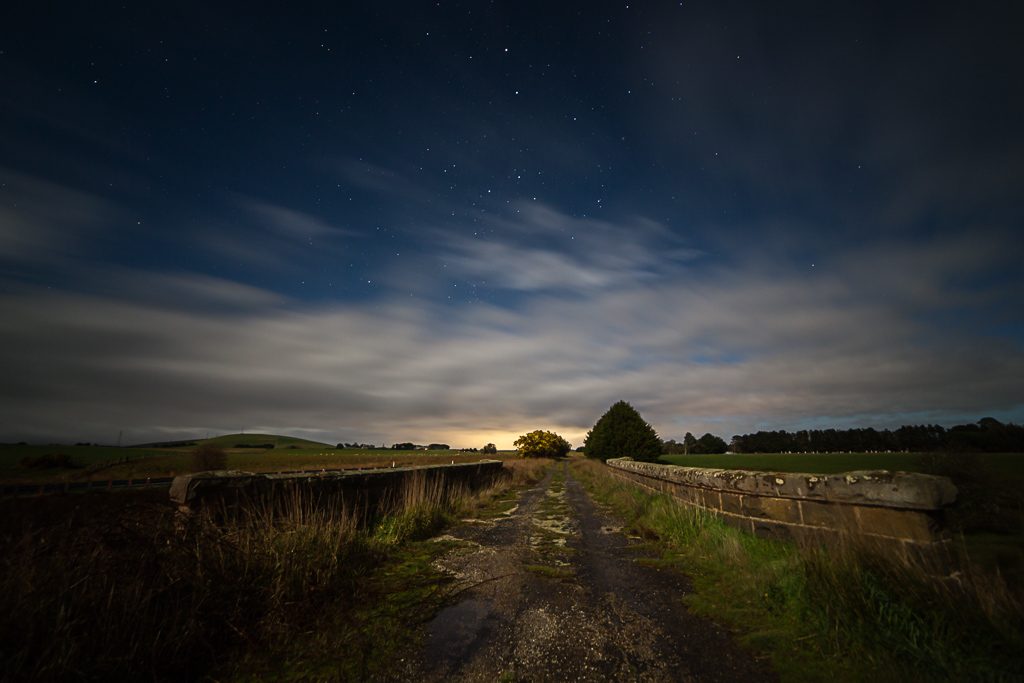 Then to top it off, I had visitors. Standing in the icy darkness, a passing car suddenly slowed. I thought to myself, ‘Don’t tell me, someone is going to park near me?’ I’m not sure why I asked the question, as of course they were going to stop nearby. I’ve no idea what was happening, but after stopping, multiple doors began to open and close. This was accompanied by their interior light flicking on and off a million times. Then to top it off, a variation of blokey voices began talking at different pitches. Everything from the high-talking ‘squirrel on helium’ sound to the ‘Lee Marvin with a brick suspended from his nuts’ tone. As a result, I found my night time mojo rapidly wane.

Who knows what they were doing? Maybe they wanted to dump a body, but seeing my car put them off. Sure, they might have been cramping my photographic mojo, but maybe I was cramping their, ‘I need to dump this body in the creek pronto’ mojo? Without doubt, nearly all my night shoots have involved some sort of oddball. It’s interesting to see who’s out and about on a freezing cold evening. Hang on? Am I talking about me?

Anyway, eventually all the doors closed and they took off at a fast clip. Naturally, this speedy getaway created another unwanted night photography aspect. It’s hard to get all moody when tailights are whizzing through a shot. 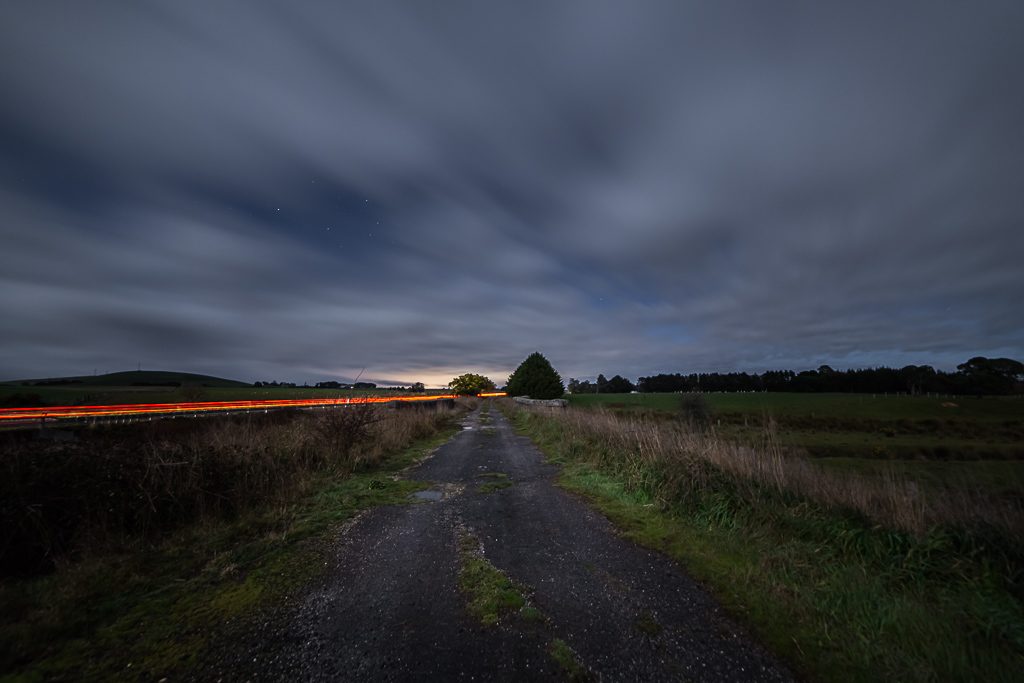 Besides the lights, you can see another thing that caused me to abandon the dark. Clouds. As they moved in, it was time to get out of there. Night photography is notoriously unproductive. As it is, the bridge and its abandoned road looks better in the daytime. 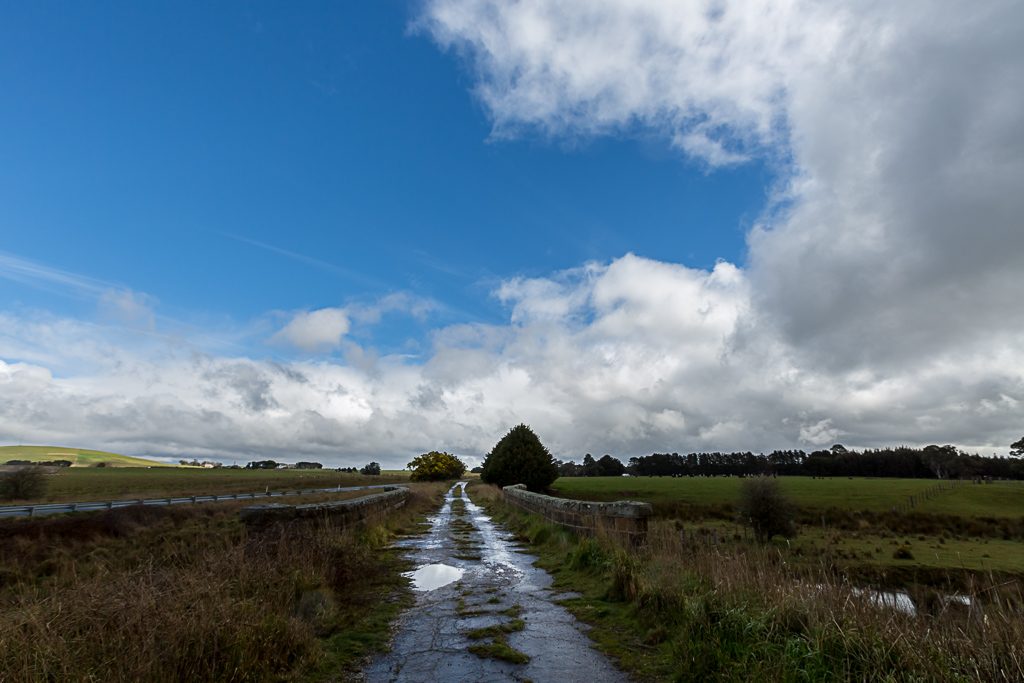 That’s it then. Are you wondering if I’ve given up on walking and from now on I’m going to write about things I drive to? NO. Amongst all of these posts, I’ve been doing some walks. I’m not sure how, but last month I managed to wander the Burchell Trail in the Brisbane Ranges, the Great Ocean Walk (again!) and the Fortress circuit in the Grampians. Honestly, a lonely winter tilt on the Great Ocean Walk is worthy of a few more posts. Plus, every time I do it, there’s been a track change. It’s definitely a million times better now, than when I first did it in 2009.

Oh, plus I found these walks online. Have a look at this. The 2015 Federation Walks. These 20 have kept me busy and I’ve done most, so I might write about a few of them. I even found Mr Hunts Chinmey. Don’t get me started on the 2016 Federation walks in the Grampians area…

Anyway, this post is over. In the end, this bridge might have an official name, but for my purposes it’s the Langdons Creek Bridge. I’m open to corrections though. Maybe I should have named it by its coordinates? 37°22’33.8″S 144°01’24.5″E sounds quite hip, but it’s a bit of a mouthful.