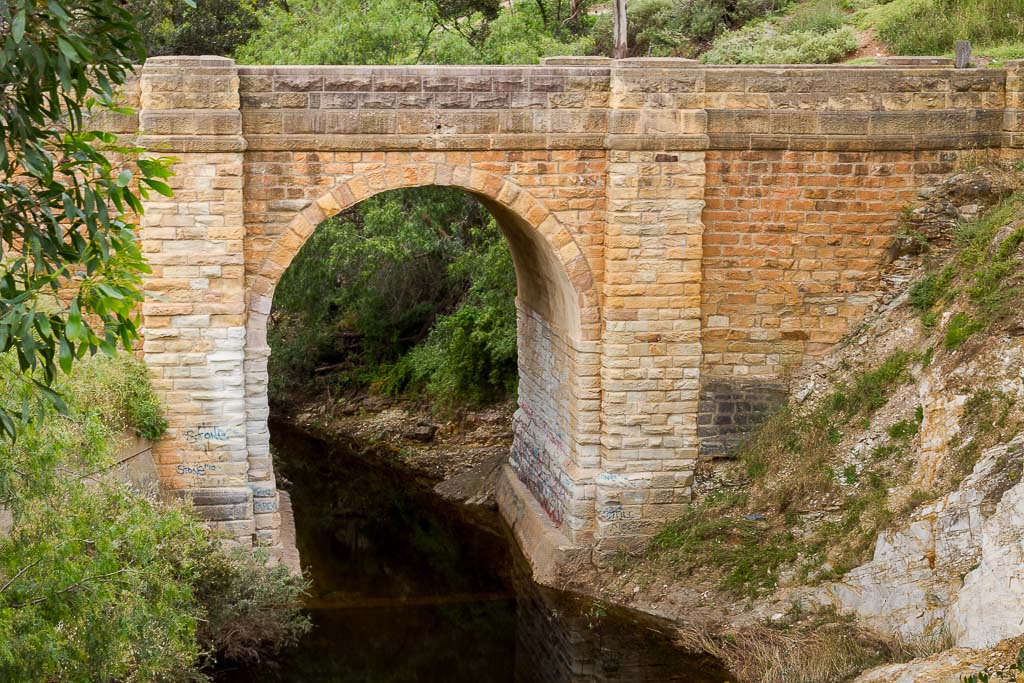 Yeah, okay, I know what you’re thinking. “What sort of hiking blog has a write up on a bridge?” Well, this one I’m afraid. There’s more to it though. The plan was to head out on a Saturday afternoon for a walk at Werribee Gorge. I picked out a circuit from my trusty Glenn Tempest book, ‘Daywalks Around Melbourne’. The stroll was about 10 km and I felt comfortable leaving in the afternoon, as Werribee Gorge isn’t too far from my place.

There was one slight problem though. I can’t say I’d examined the map too well regarding the start of the walk. Do you know where this is going? As we set out, I opened the book on the Werribee Gorge page and gave it to Ben, whilst saying, “Take me there. Follow those instructions.” I vaguely waved over the page as we took off. 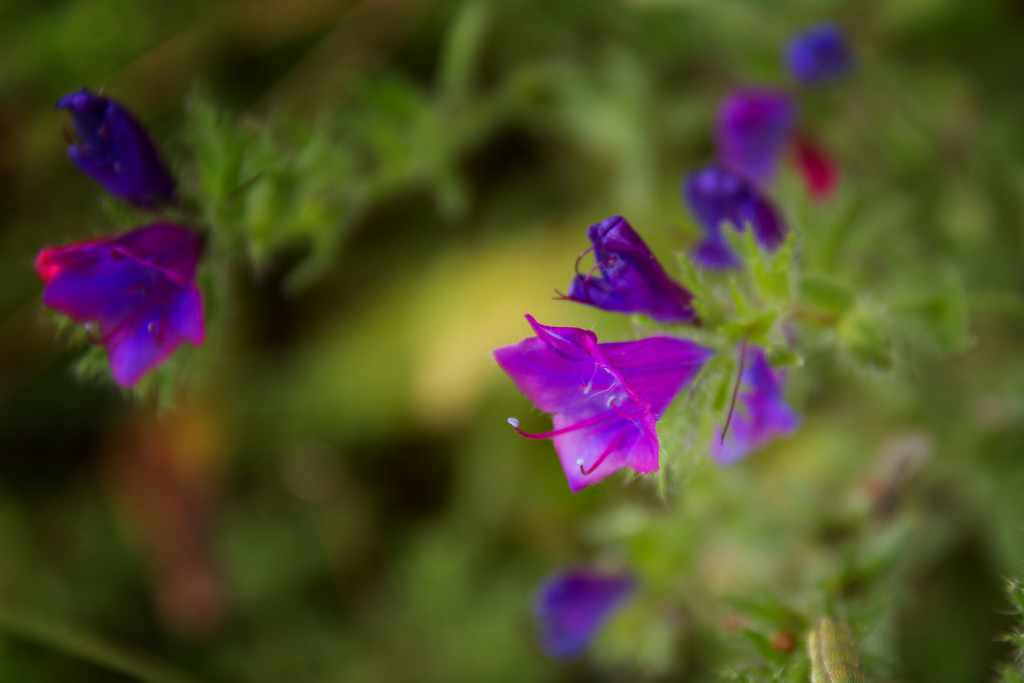 We made good time and turned off at Bacchus Marsh, which is the closest town to the gorge. Ben was nailing the instructions with skill. “Right at the roundabout. Right at this road, right again, dirt road coming up and first right over the railway line” Hey? How easy’s this?

As I was powering along a dirt road, I began to think why there were no signs helping me out. Where are all of the, ‘This way to Werribee Gorge’ signs? Well, I guess I should have wondered a little harder, as without fail there had to be something wrong. It wasn’t long before we saw a turn off to a small car park which Ben told me stop at. I was aimlessly looking out the window at the first Parks sign I’d seen and it said, ‘Falcons Lookout’. It was at this point Ben calmly said, “Hey, this is the spot for Falcons Lookout.” Only then did I realise what had happened.

Falcons Lookout was a separate walk within Werribee Gorge, but absolutely not the spot I wanted to be in. I needed to be quite a few kilometres away in another car park. What had gone wrong? I grabbed the book and realised when we set out, I’d told him to give me directions, which were on the page I pointed out. Well, the page I showed to him was page 59, when in fact the walk I wanted was on page 61. Bloody hell. Okay, attention to detail was lacking a little. 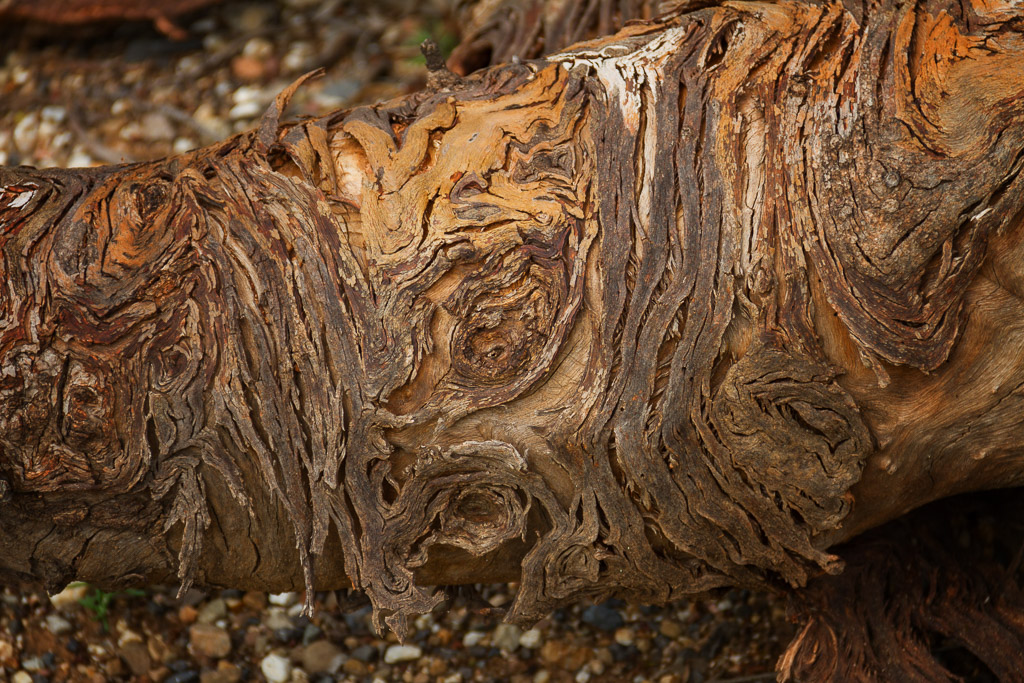 What do we do now? The answer is go to the correct location! In distance terms the car park we needed was not far away, but there was a problem. It was on the other side of the gorge, which meant the roads went on a convoluted route all over the place before we found the right spot.

Upon arrival, I looked at my watch and it was after 3 pm. Dark clouds were about and after a bit of hesitation we decided to abandon the walk. Why? Well, I didn’t want to be rushing on the track, as I had a roast to cook. If we’d found the correct car park at the start, we could have done the walk and still had time to get home and put the roast on. The plan was to come back the next day and try again. Definitely a 100% balls up. 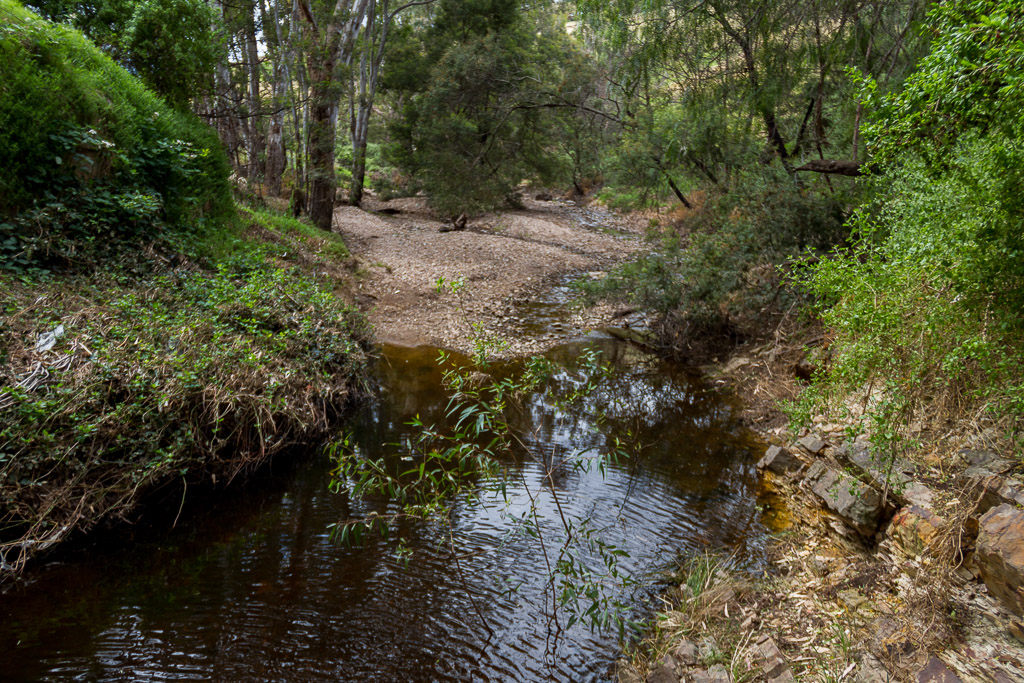 Oh well, it stands to reason it didn’t go to plan, as most of my outings have some sort of stuff up. The drive back consisted of standard highway travel, but I did have something left up my sleeve. I’d always noticed an old bridge off the Western Highway, on which we were travelling. It seemed to be have been left behind in time and was probably originally on the road before it was upgraded and now bypassed.

Then again, maybe on the original road back in 1900, as it’s about 2 metres wide and it really does have a ‘ye olde’ look about it. Whilst beetling along the Western Highway, I think the whole world has glanced at it bridge and thought, “That looks old. Keep the foot down.” Well, today was different. I was stopping to have a look.

I turned off at a track, which I thought would take me to the bridge, but was incorrect and I was actually in the drive-way of ‘Gavs’ place. We had no interest in saying hello to Gav, so I did a u-turn and headed back out on the highway and eventually found the right spot. Yep, found it. 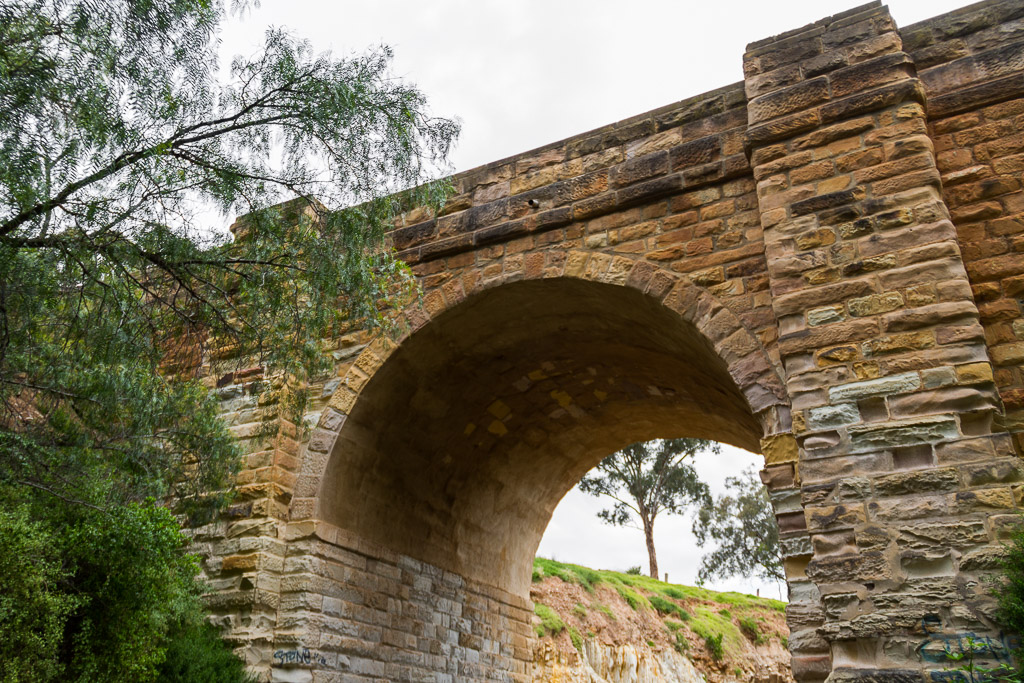 I wish I had read the blurb on the National Trust Register, as I found out the following when I got back.

“…Sandstone bridge constructed over the Djerriwarrh Creek in 1858-1859…single arched structure has piers framing the opening and substantial abutments constructed in a plinth, all in rusticated masonry. There is a string course at pavement level and the piers elaborate the balustrade. Djerriwarrh Creek Bridge, Western Highway, Bacchus Marsh, is an early surviving stone bridge distinctive for its single arched design and construction in sandstone…“

How’s that then? You came here for hiking information, but instead you’re now having a history lesson. When I’ve run out of ideas in this infernal blog, I could just resort to history lectures instead. What I definitely know now, is there’s a bloody old bridge in Bacchus Marsh. I’m thinking 1858 is pretty old and it’s a lot older than I imagined. 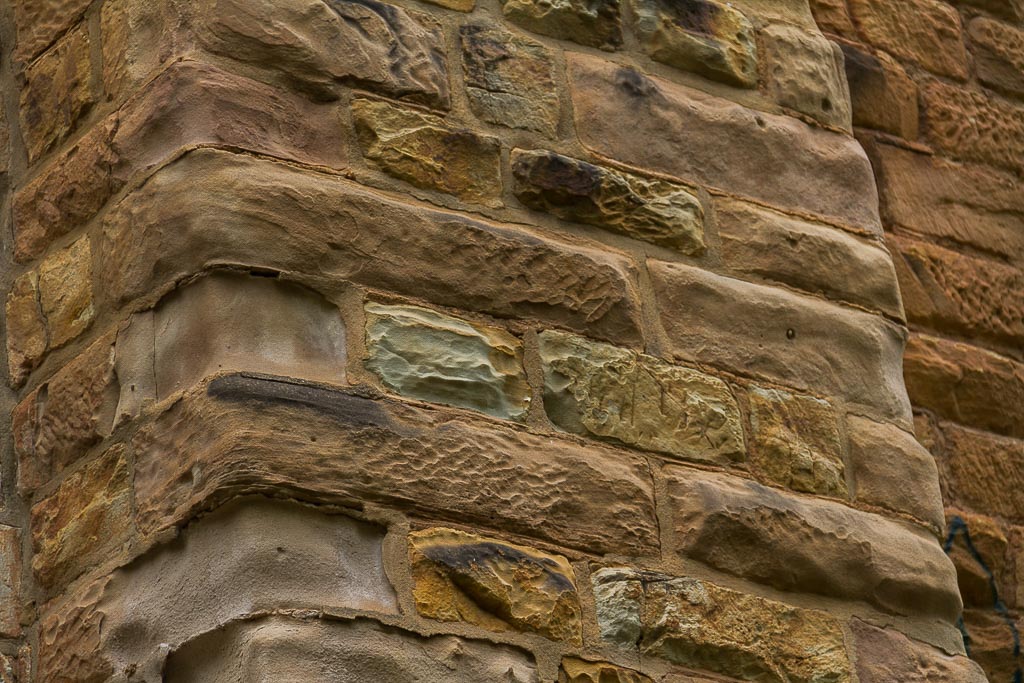 Check out the 1858 sandstone

I didn’t really take in the ‘plinth in rusticated masonry’ whilst looking at it, but Ben thinks I’m the one with the substantial abutment. Tough world this one. 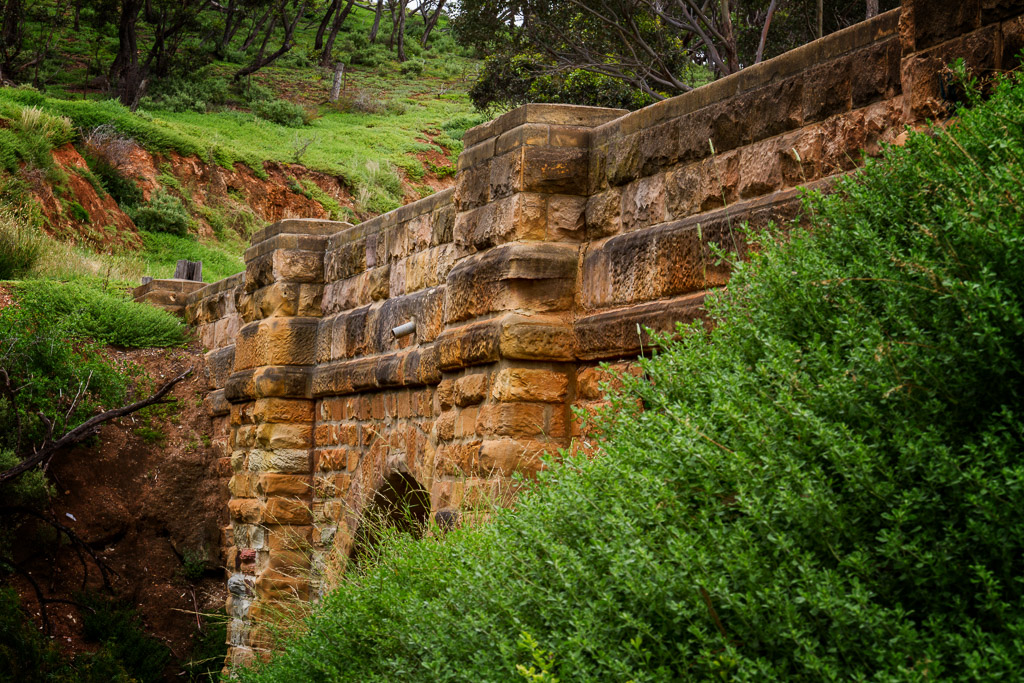 We climbed down to have a closer look and found the locals don’t seem to be happy with the piers elaborating the balustrade. So unhappy, they’ve decided to spray paint all over it. I couldn’t get the ‘old world’ feel, whilst staring at blue spray paint. I did consider it would be quite entertaining finding the people who did the spray painting, and then introducing the front of their face to the unique sandstone. Preferably at high speed.

Oh well. We had a look around and admired the debris of a small creek next to a major highway. A lot of litter, consisting of fast food wrappers, beer bottles and whatever else that can be hurled out of a car at speed. I mean, why would one take rubbish home when it can be thrown at 100 kph into the creek? Quite logical I would have thought. We both decided to get a little zany and try to navigate the centre of the bridge above the water on a small ledge. It reminded me of something from ‘Tomb Raider’. 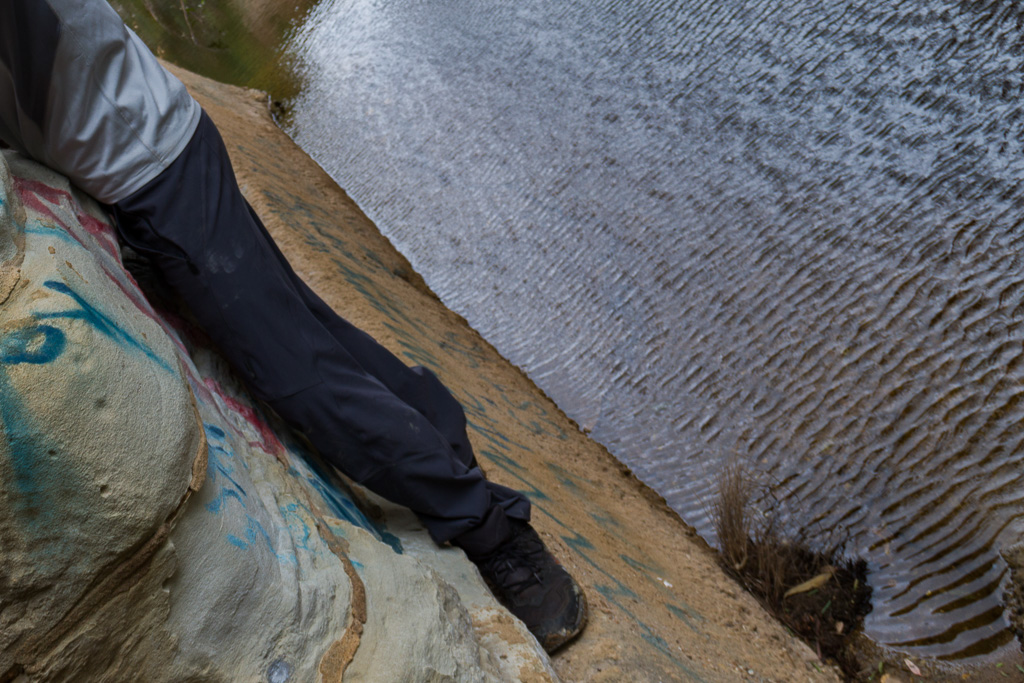 We continue to peruse the bridge, but there’s only so much observing to do, so it came time to head home. Remember, I had to put the roast on. I did notice some weird behaviour before leaving though.

A 4WD drove onto the bridge and then proceeded down a heavily rutted track to the edge of the creek. A bloke hopped out for about 3.2 seconds and then got back in, before driving all the way back up and then continued onto the highway. I reckon he spent 20 minutes trying to negotiate the dirt track, when he could have done what we did. Park the car and walk about 50 metres. I guess 50 metres doesn’t have to be walked, if one can drive though can it? Silly me. Then again he may have been about to dump a body, but upon seeing us, decided to leave.

Lastly, there’s a spot on top of the bridge where a plaque had obviously sat. Well, no more. It had successfully being pried off and either chucked into bushes or taken home as a souvenir. So there you go. I bet you didn’t expect to read and get a quick history lesson about the Djerriwarrh Creek Bridge, Bacchus Marsh that was built in 1868. History has to end somewhere though, otherwise you could repeat it. Whatever that saying is. It’s a lot easier to remember if you’re not hungry and we had to get going. Cooking was required. Oh yeah, hopefully the next walk will be planned a little better. I reckon the total distance walked on this ‘hike’ was about 250 metres. How easy is this hiking business…? 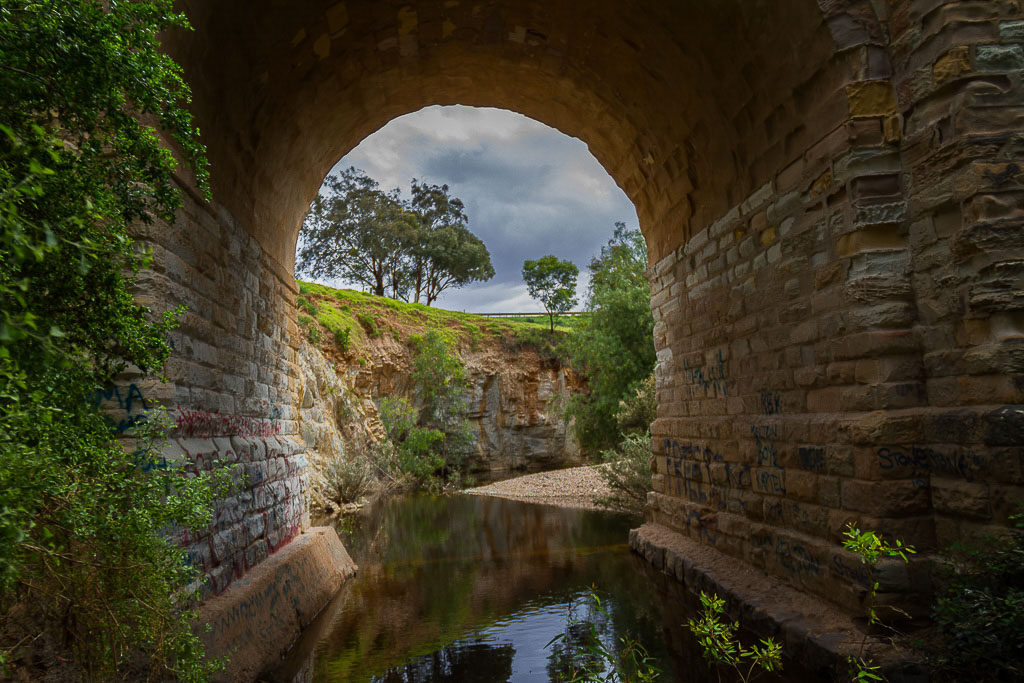