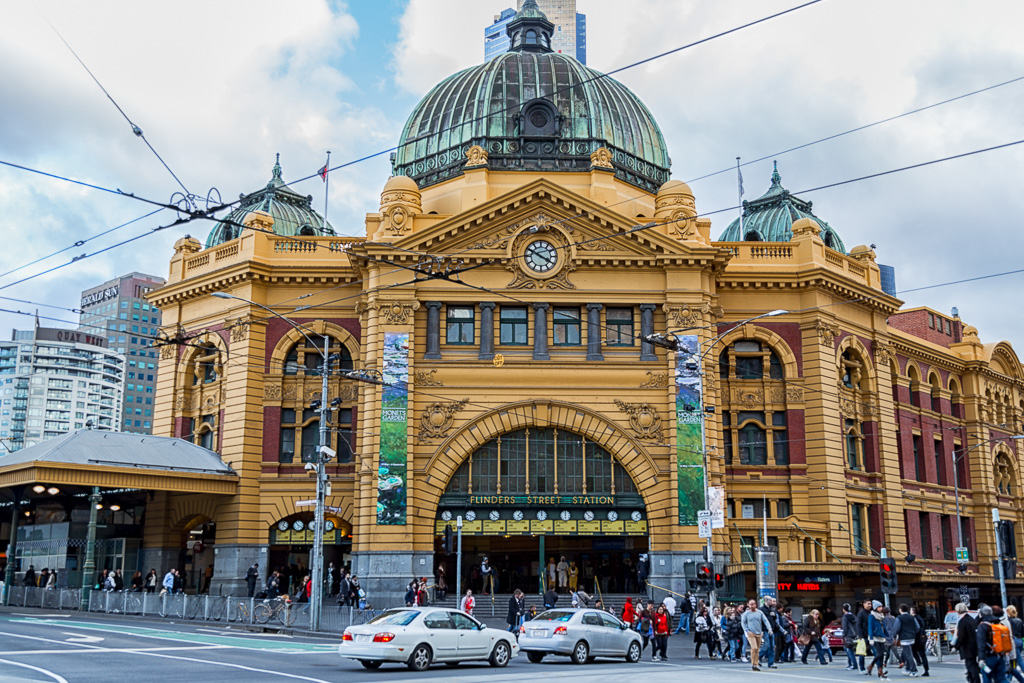 I work in the city, walk around the city and eat hot chips in the city. I reckon there’s not a lot of asphalt within town I haven’t walked on before. During my wanderings I pass thousands of people and won’t remember a single face. Now and again though, somebody will stand out and they will catch my eye, but even then, they’ll eventually be forgotten and become just another blur in my memory. That’s unless I see the same person more than once. Especially on the same day and in the same pose, holding the same magazine, no matter where I walked. It’s like he was force feeding me a visual clue. Let’s investigate.

Flinders Street Station is iconic, isn’t it? Even more so are the front steps, which have been a meeting point for Melburnians for over a hundred years. Hundreds of people walk down those steps every hour and they’re usually forgettable. Not on this day though. Something caught my eye on top of the stairs.

Was it the three standing there in one piece animal outfits…? 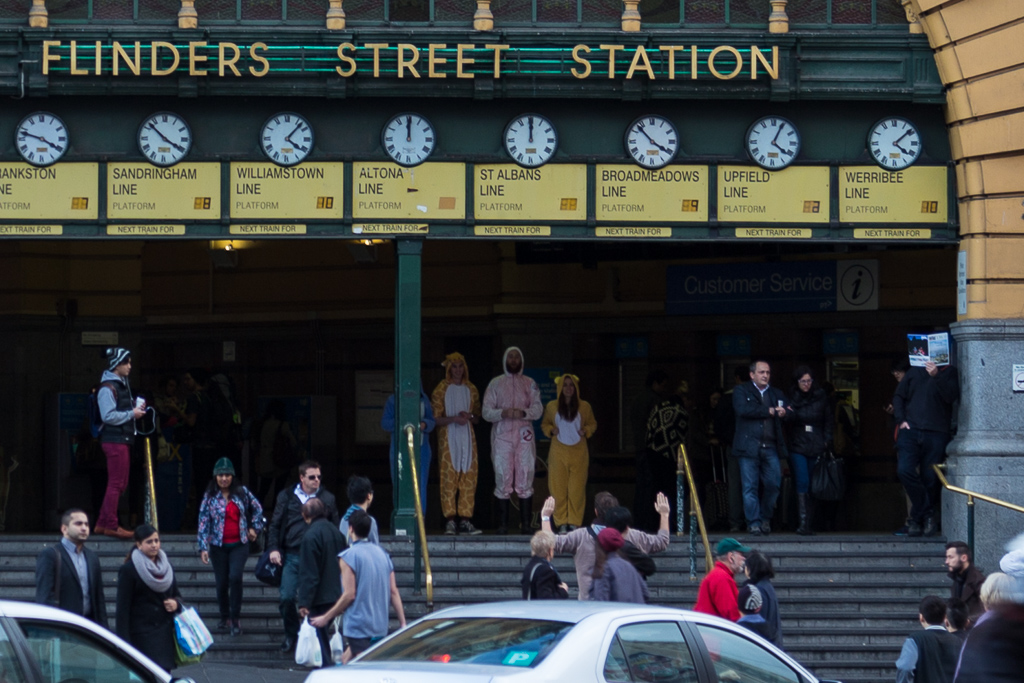 A little unusual, but no, that’s not it. Actually, it’s the bloke nonchalantly leaning against the wall on the right reading a magazine. Who stands there reading? Why would I care? Something though, made me want to have a closer look. After crossing the street he was still in position… 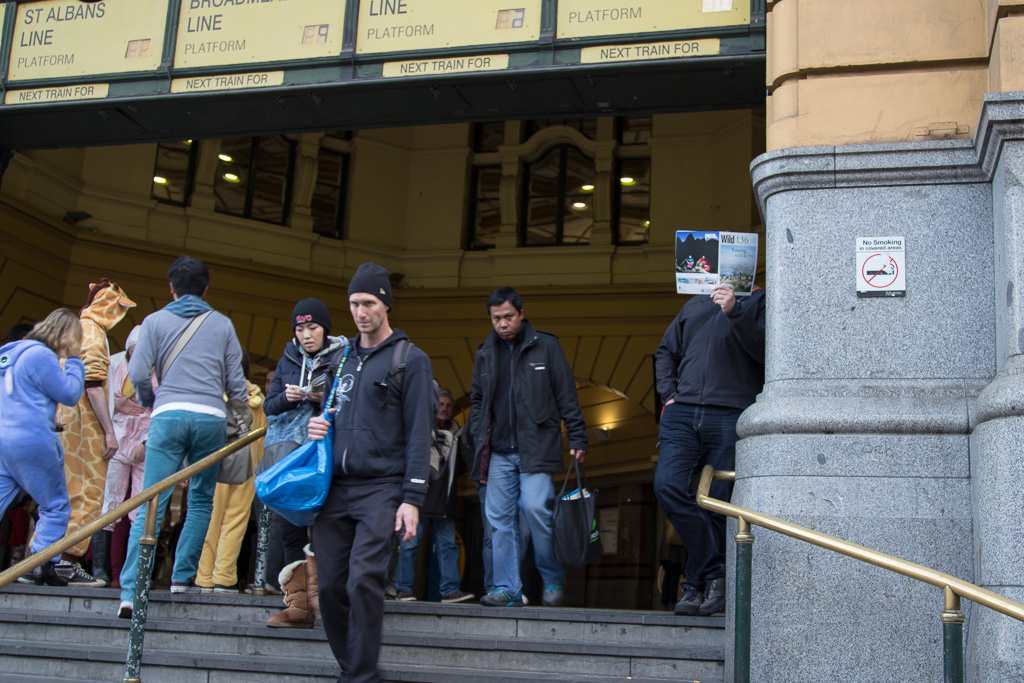 At a distance it appeared to be an outdoor magazine. Mm… What’s it all about? I continued on and didn’t think anything of it. I walked up St Kilda Road and unbelievably I saw him again. Seeing the same bloke twice, in the same pose, within minutes was a little unnerving. I was immediately reminded of ‘The Hitchhiker’ episode from ‘The Twilight Zone’.

Anyway, the magazine being held was now clear. Issue 136 of ‘Wild’. 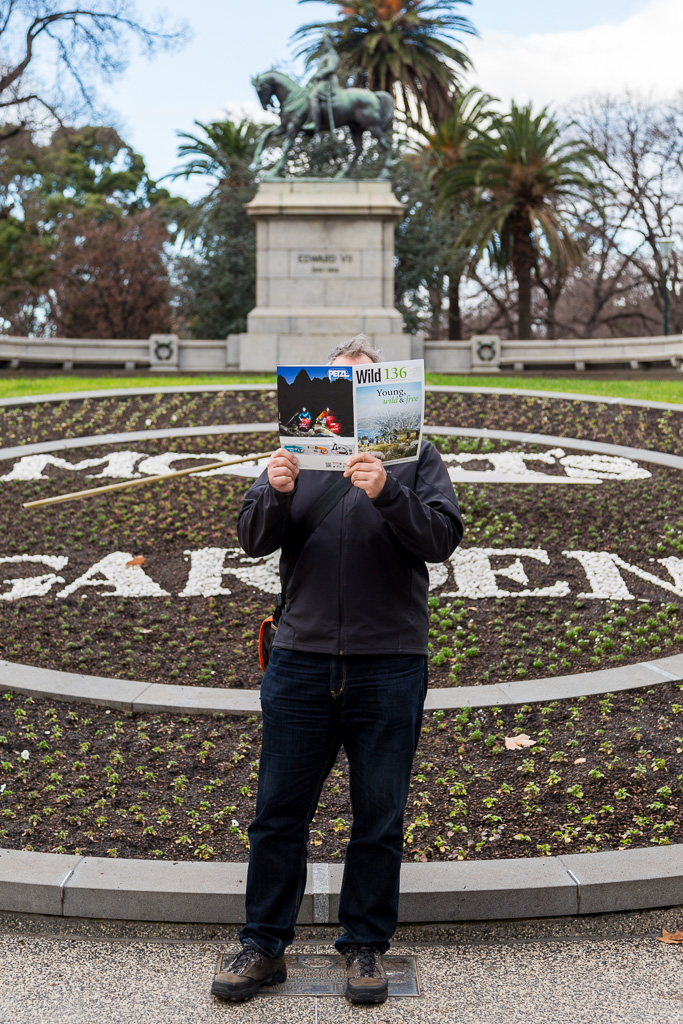 I’m a regular purchaser of ‘Wild’, but was there something about this latest issue, which the stranger was trying to tell me?

I moved on, but only a short distance away he was there again. I was no longer perturbed and it appeared no matter where I walked, he’d be close by. 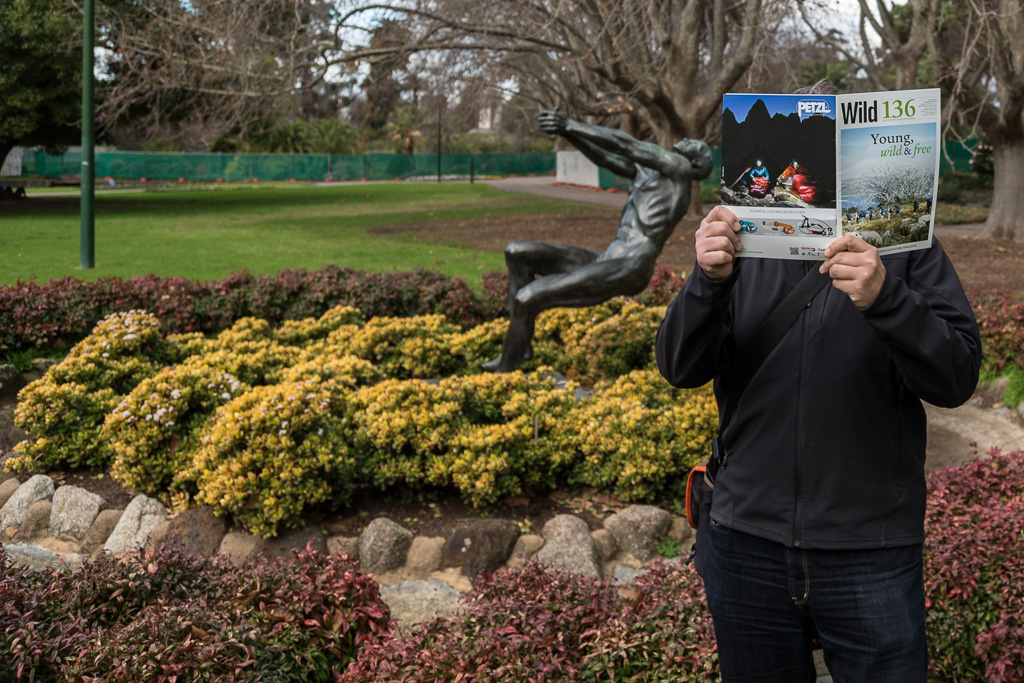 It was time to solve this puzzle. My first clue was when I passed the statue of ‘Hercules’ in the gardens. He was only a bust, but somehow he was reading the same issue of ‘Wild’. Is this possible? He’s got no hands? 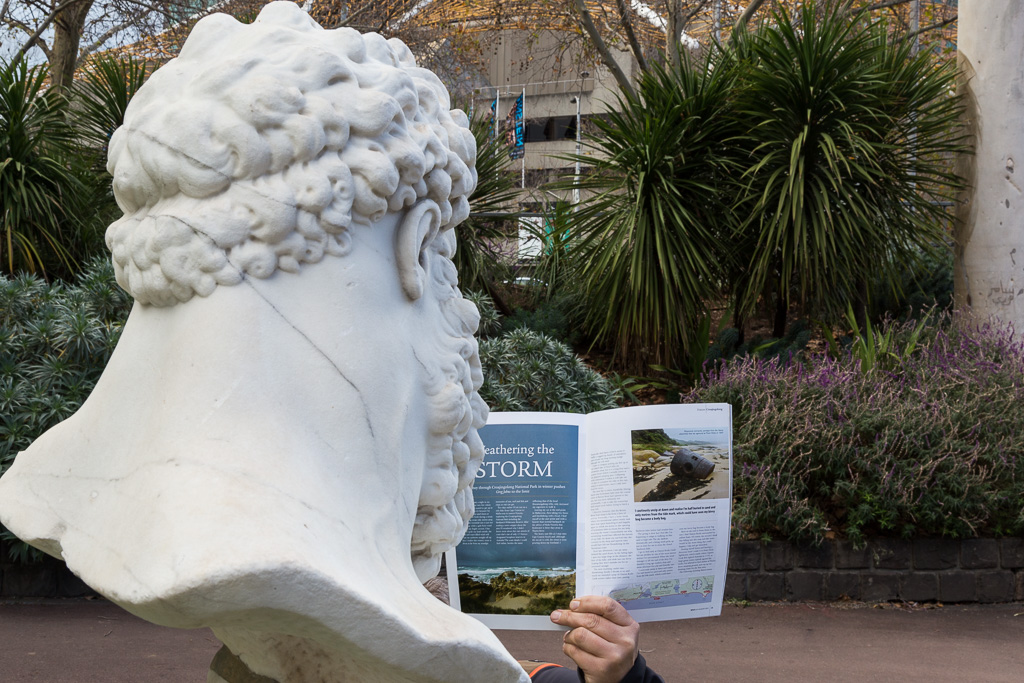 What caught my eye, besides the floating head reading a magazine, was the particular article. It was called ‘Weathering the Storm’. I wondered if that’s what I needed to pay attention to?

I walked on and any wondering about the significance of what I’d seen was put to rest. Unbelievably a ‘pedestrians only’ painting on the footpath was reading the same feature. 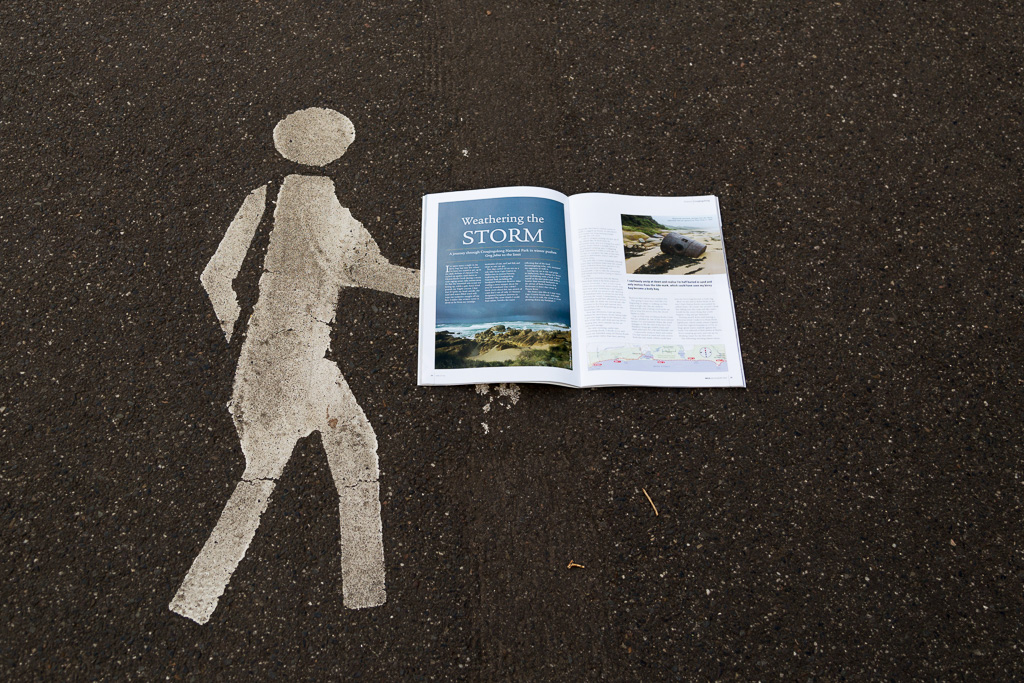 Just before the stick figure ran away, I had a closer look. It was a story about a winter hike through the Croajingolong National Park and it was written by some wanker calling himself ‘Hiking Fiasco’. Who was this man? Was it Mr Hiking Fiasco who I’d seen holding the magazine? I wasn’t sure, but I was certain of one thing. He wouldn’t leave me alone. No matter where I went.

Strolling into Degraves Street for a coffee, he was there blocking my path. Either that, or he was keeping an eye on the man with beard and glasses, who appears to be a regular user of the ‘1969 Charles Manson Beauty Range Products’. 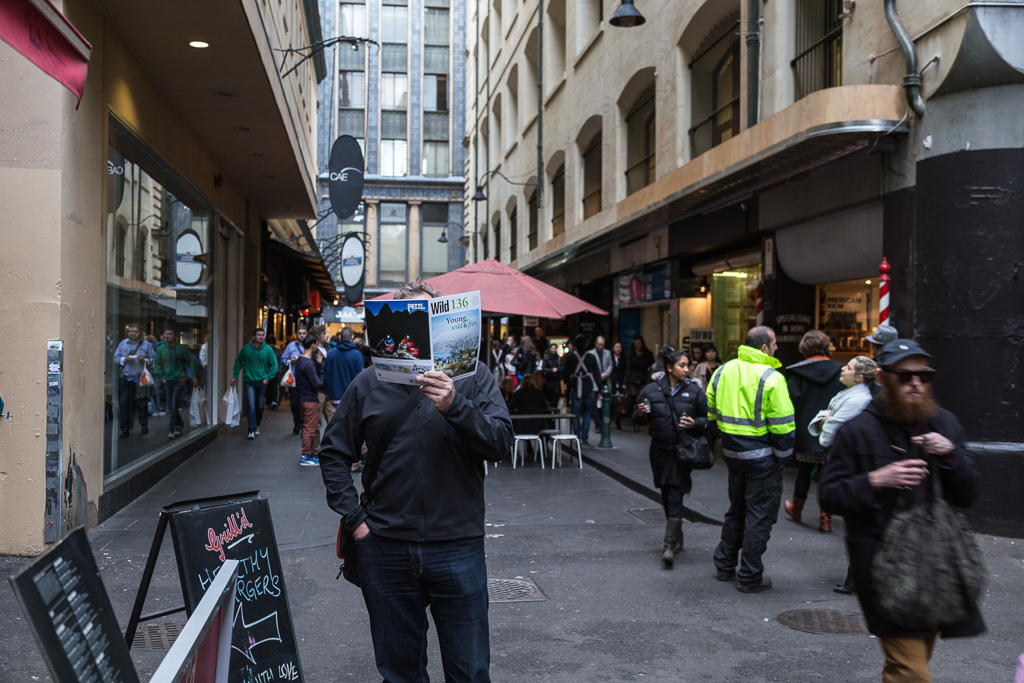 Walking on, you don’t have to be told who I saw next… 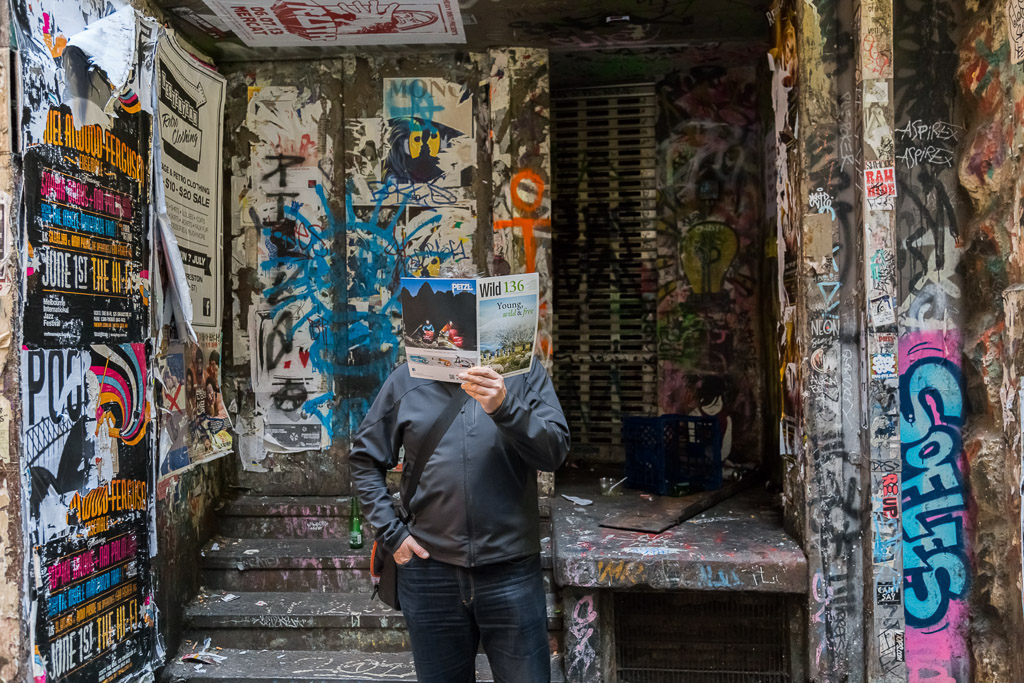 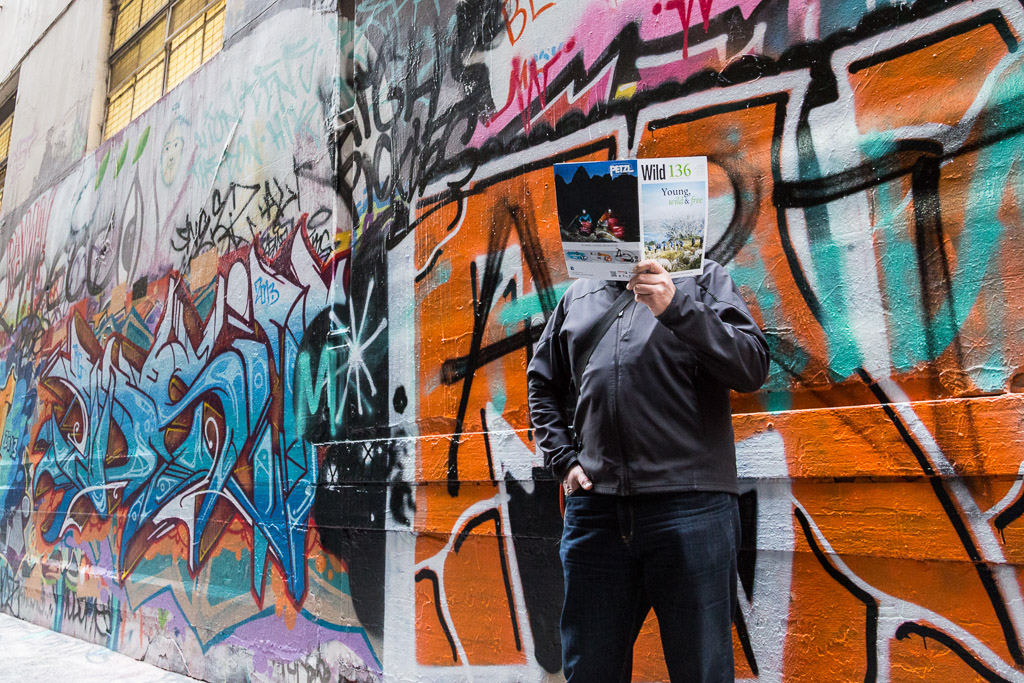 …and even at a distance. 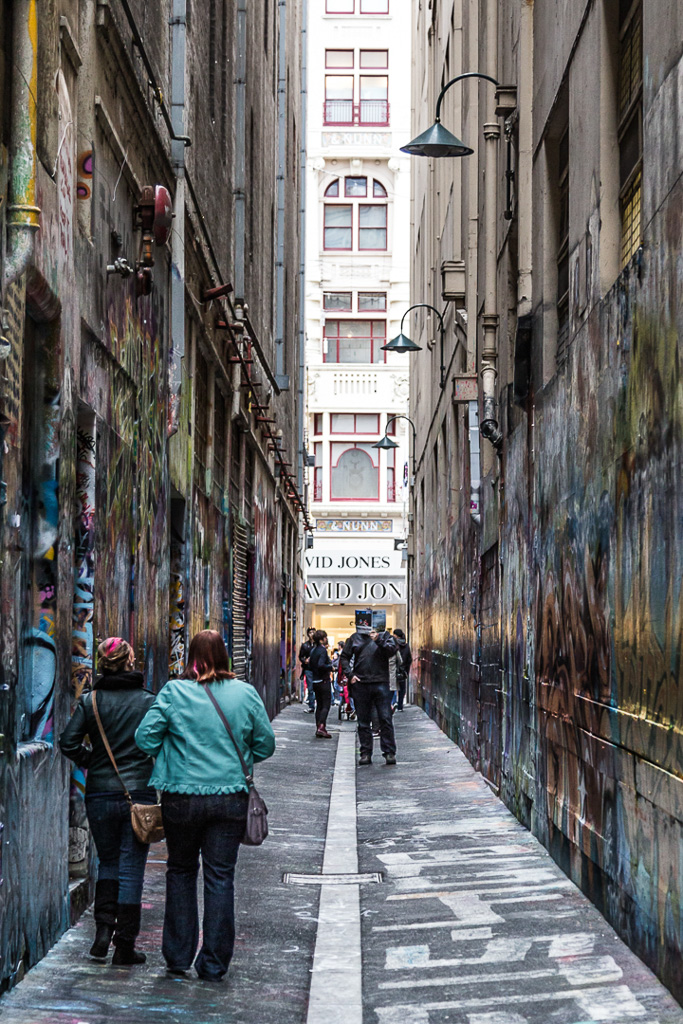 I’d had enough. I headed home, but I needed to get to the bottom of this, so I purchased a copy for perusal. Reading the article from the comfort of my couch, I was in admiration of the writer. He came across as a man of great fortitude, but like all great artists, has a number of weaknesses. A perverse love of potatoes is a major affliction, which he constantly battles. He’s fought this for a number of years and was very disappointed when the self-help group ‘Spuds Anonymous’ didn’t get off the ground. 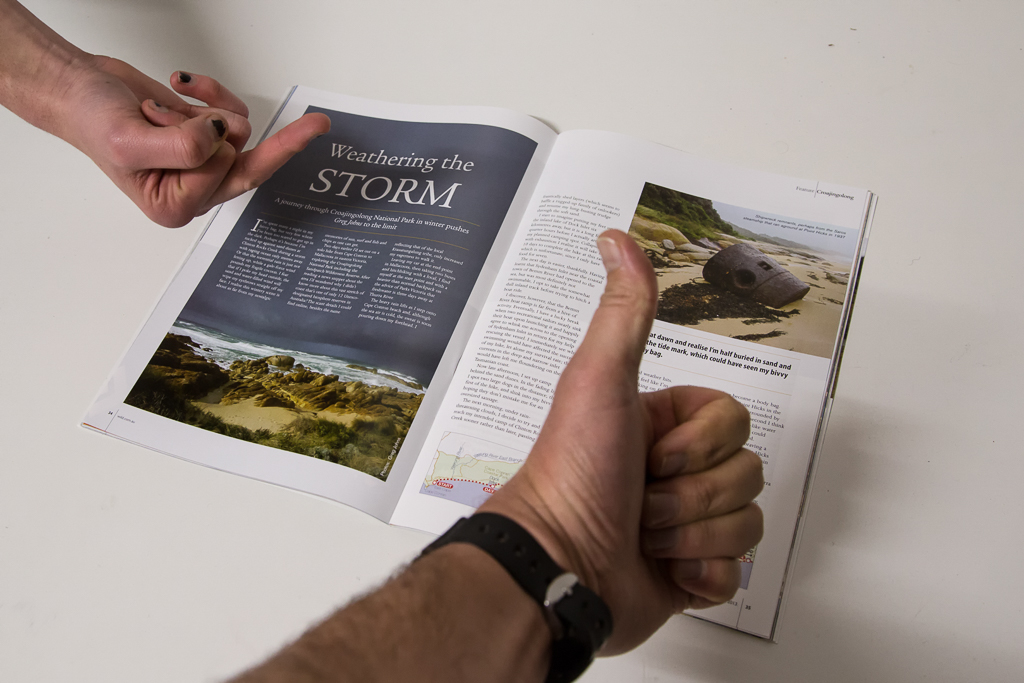 In conclusion it’s no surprise the day ended in a familiar manner. I walked into my bedroom and lo and behold, the mystery man was lying asleep in my bed. Clearly the time spent walking around the city reading Wild magazine, Issue 136 had taken its toll. 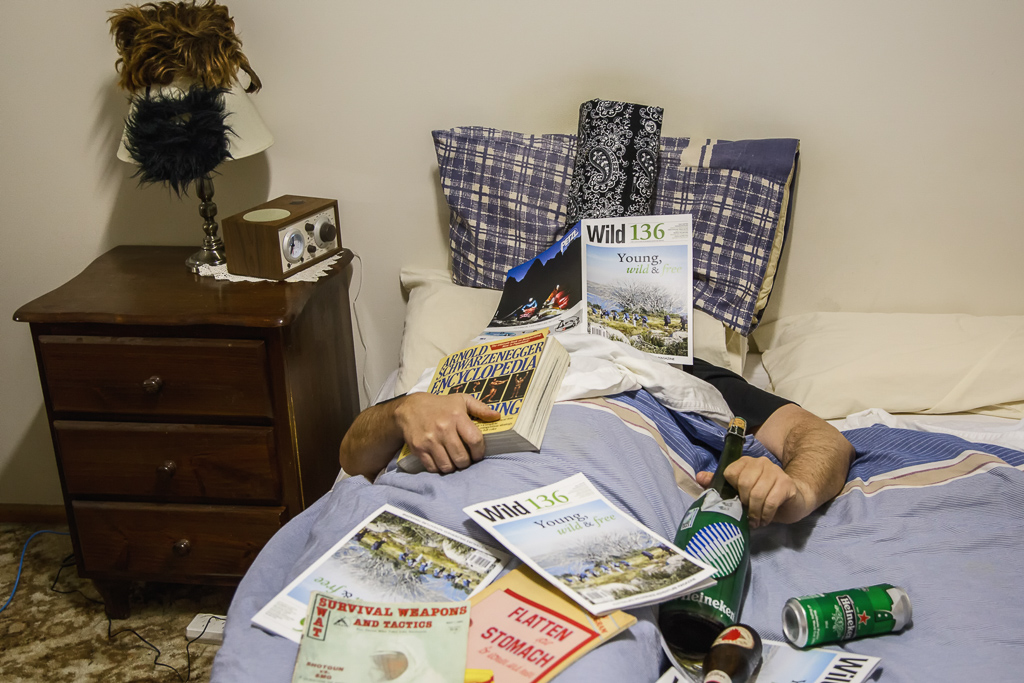