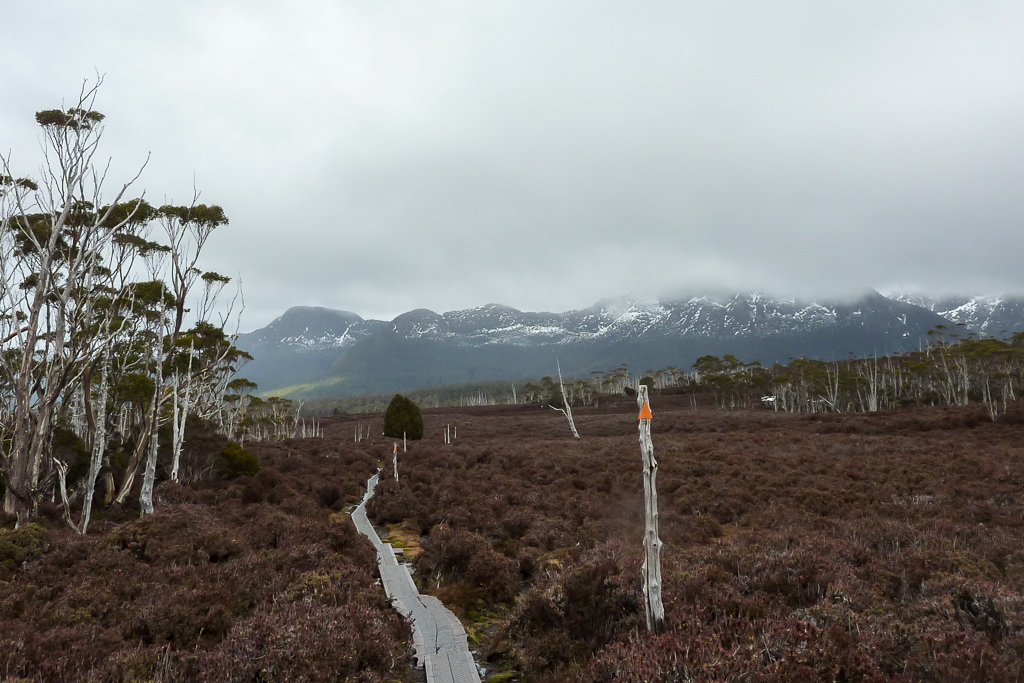 Look out, I’ve gone retro again. I’m actually enjoying dragging out these old photos of the Overland Track tilt from 2009. There’s not many days to go for this hike, so I might as well finish it off whilst I’ve got the mojo.

The night spent in the monstrous Pelion Hut was a good one. There were about another 10 to 15 people there and for the life of me, I couldn’t work out why they all slept together in one end of the building. I took the other end of the hut, where I had a choice of about 25 beds and spread out on my own.

Come morning there was a mass exodus. I’m not sure what happened, but one minute the place was humming and the next I was the only one left. Oh well, I wasn’t in a rush, as the day from Pelion Hut to Kia Ora Hut wasn’t a long one, plus I had to have a shave. A what? Yeah, it might be freezing cold in Tasmania, but one has to still look good.

Once smooth and focused, I headed off and immediately stumbled across a rather non-plussed looking wombat pottering around near the hut. 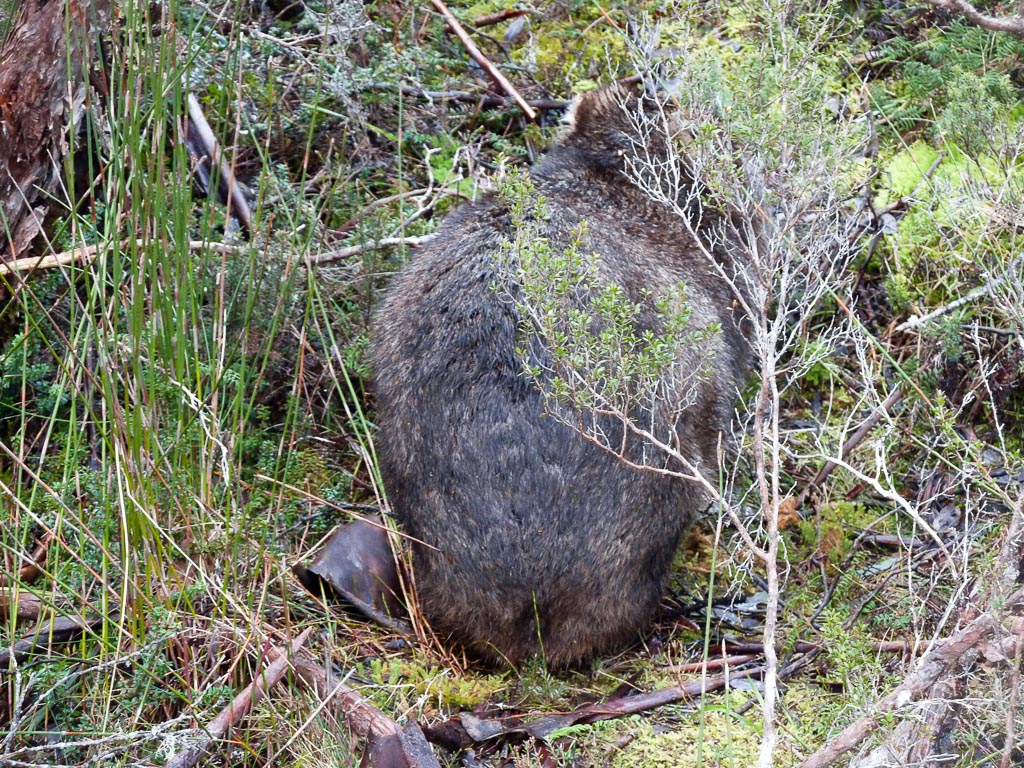 I didn’t think he’d show his face, but I managed to snap a shot through the grass… 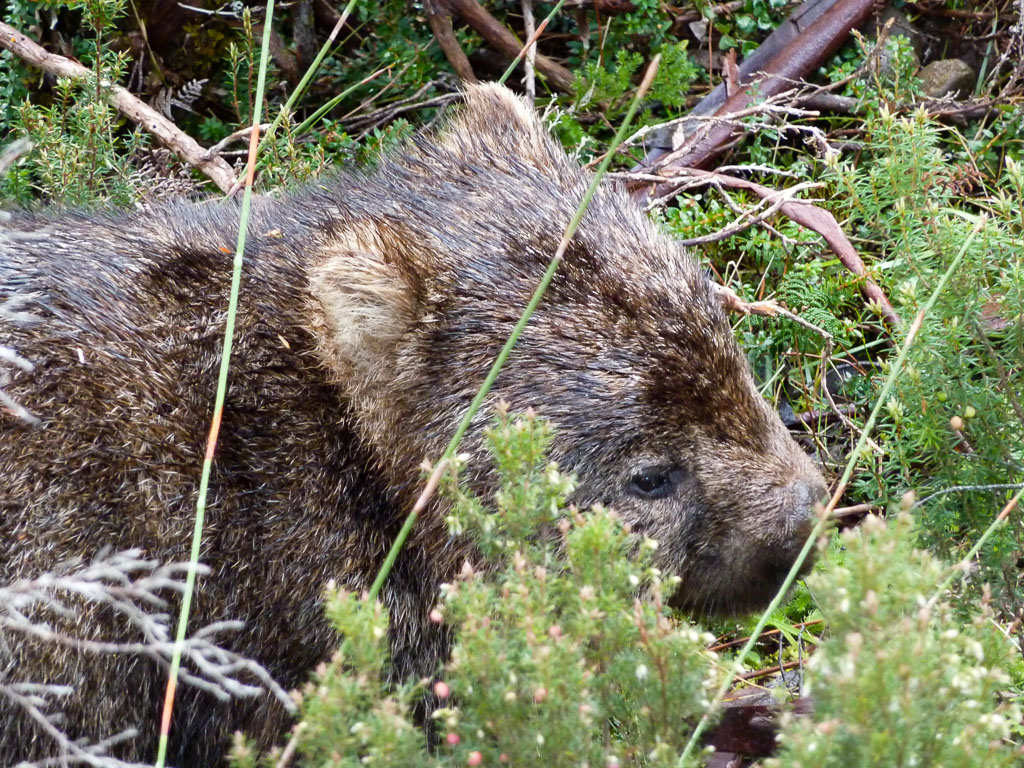 During walks on the mainland, I’ve never seen a wombat strolling around during the daytime. Wilsons Promontory has a few who aren’t fussed by people, but other than that I think they’re quite a rare sighting. Oh yeah, what’s going on with the wordspell as I type this? It just told me I was meant to say ‘woman’ instead of ‘wombat’. Mm… Come to think of it. The sentence with the ‘wombat’ in it would be fairly controversial if I’d actually meant ‘woman’.

Now, my memory is a little hazy about this day, but there’s one thing I can confirm (besides having a shave) is there’s a long slog up to Pelion Gap. At an elevation of 1113 metres, the gap is the launching pad to climb Mount Ossa, Tasmania’s tallest mountain. Would I have a go? I considered it until I continued to climb higher. It was windy, cold and sleet was falling. Considering my complete fiasco in the snow whilst trying to climb Cradle Mountain a few days earlier, I was feeling dubious. 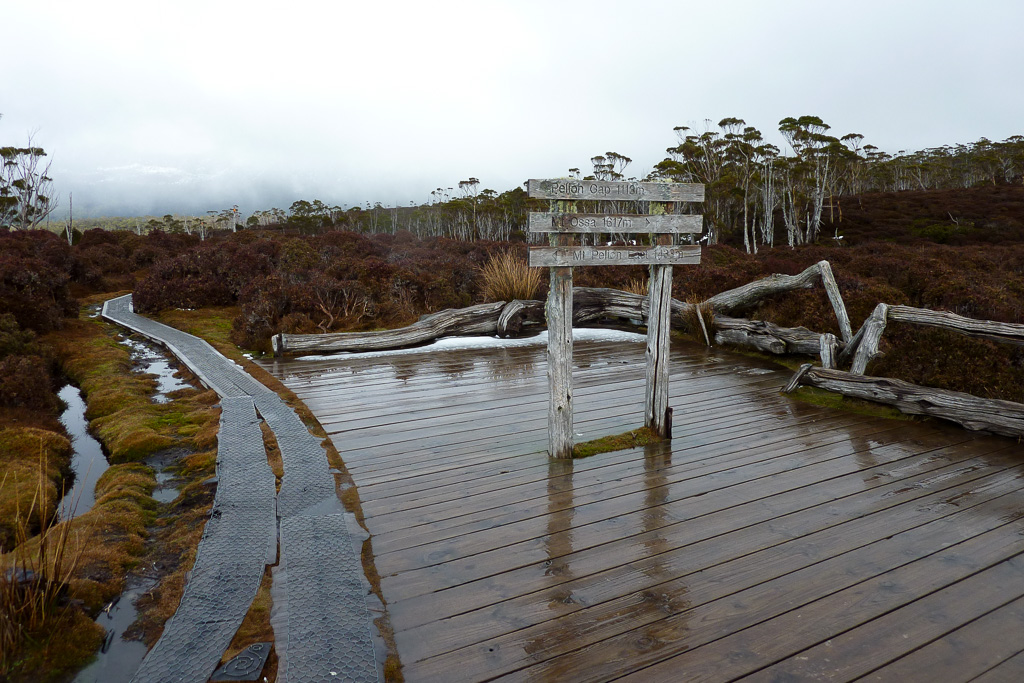 …and although cloud cover was low and the weather was average, the open land served up stunning scenery in all directions. This part was one of my favourite sections of the Overland Track. Mount Pelion East sat nearby… 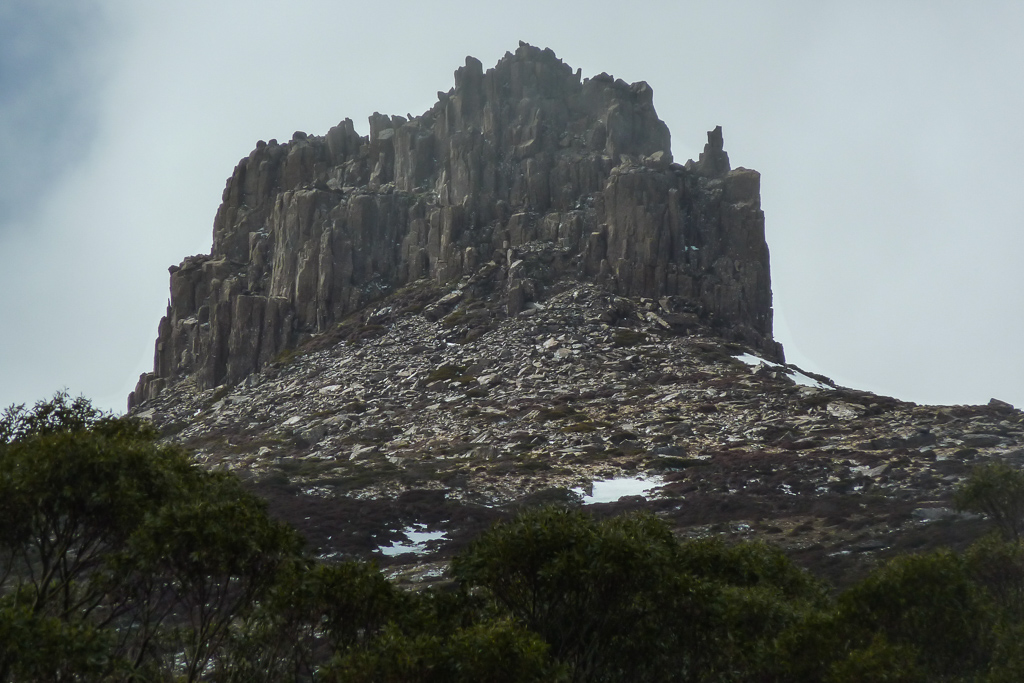 …and the track to Mount Ossa led into the hills. 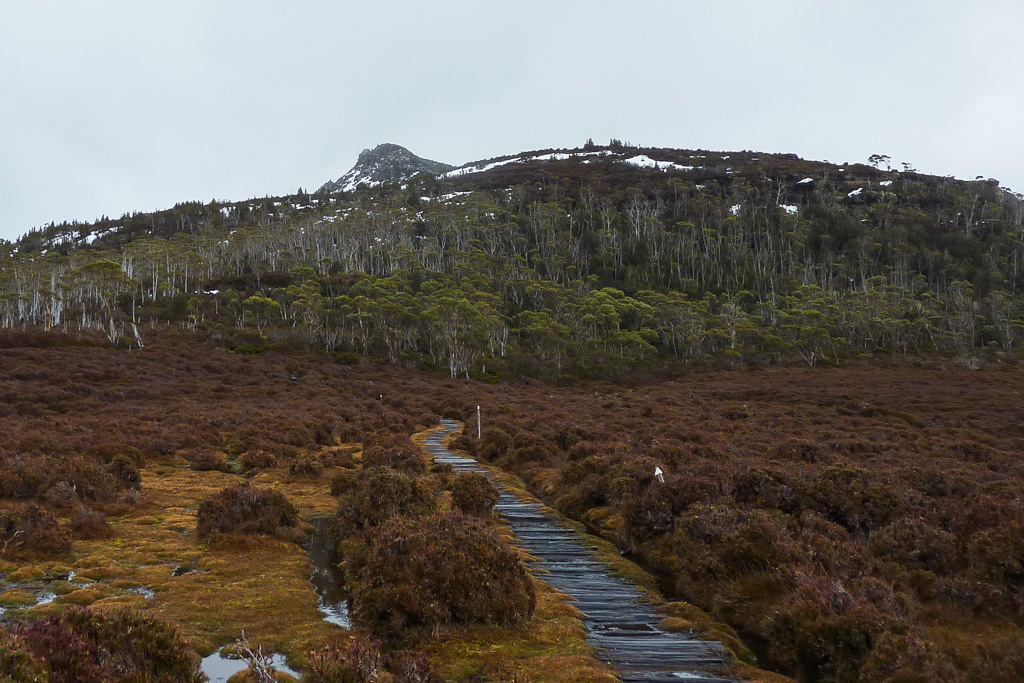 I took one look at Mount Ossa though and declined a tilt at it. I really didn’t trust myself on ice and snow and to top it off, if I made it to the top alive I’d have no view. I’m the master of doing stupid stuff, but even I couldn’t see the point when I looked at Ossa cloaked in cloud. 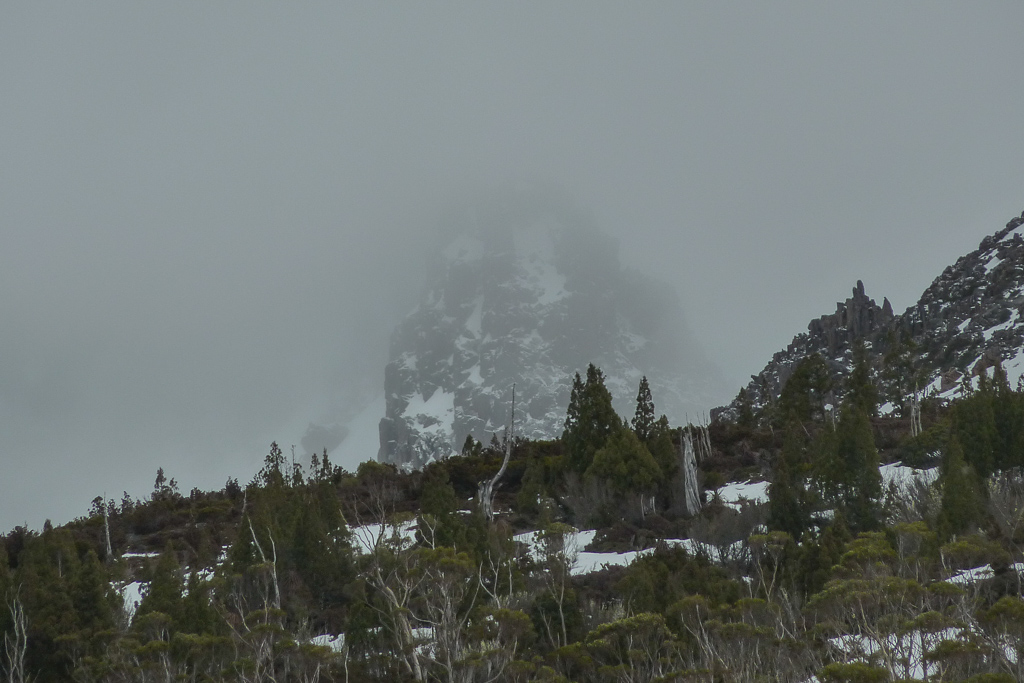 I might have been freezing half to death, but I spent some time at the gap. Firstly I was trying to perfect a photo of moss on the weathered timber… 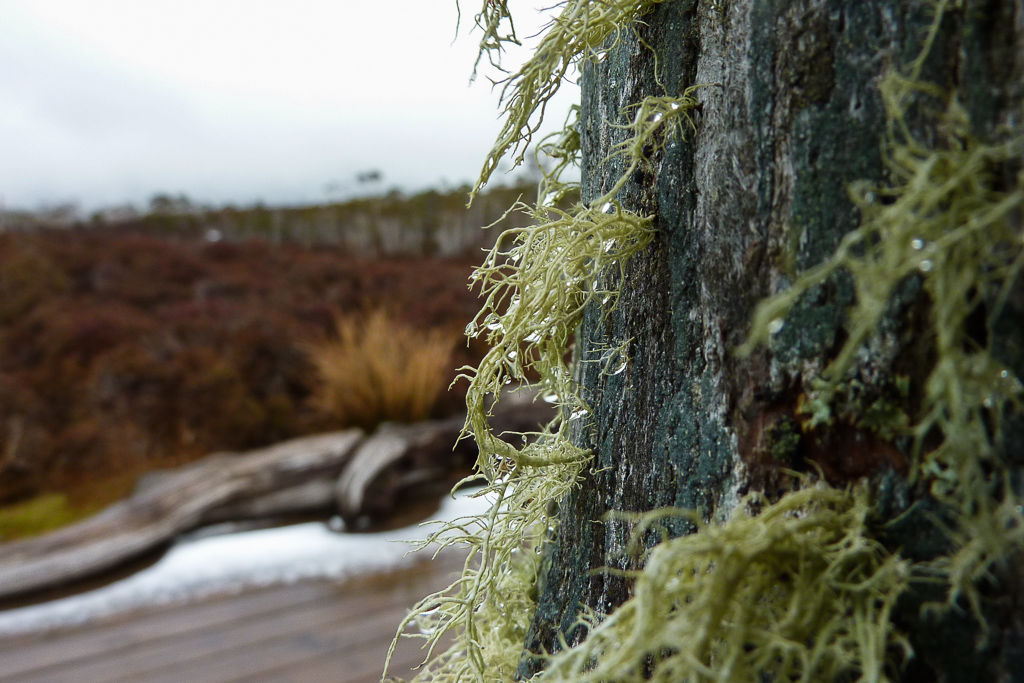 …but I didn’t have the camera or the skills to capture what I wanted, so feeling a little defeated by the ‘moss on a post’ I turned to ‘moss on an ‘M’. 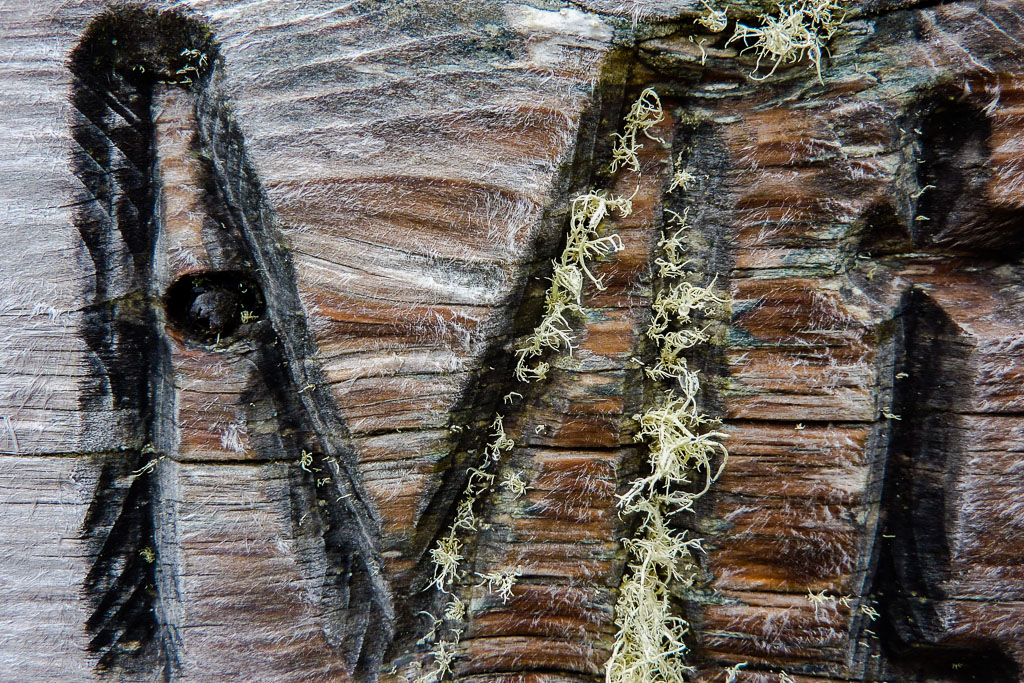 This wasn’t working too well, so I ended up firing photos in all directions… 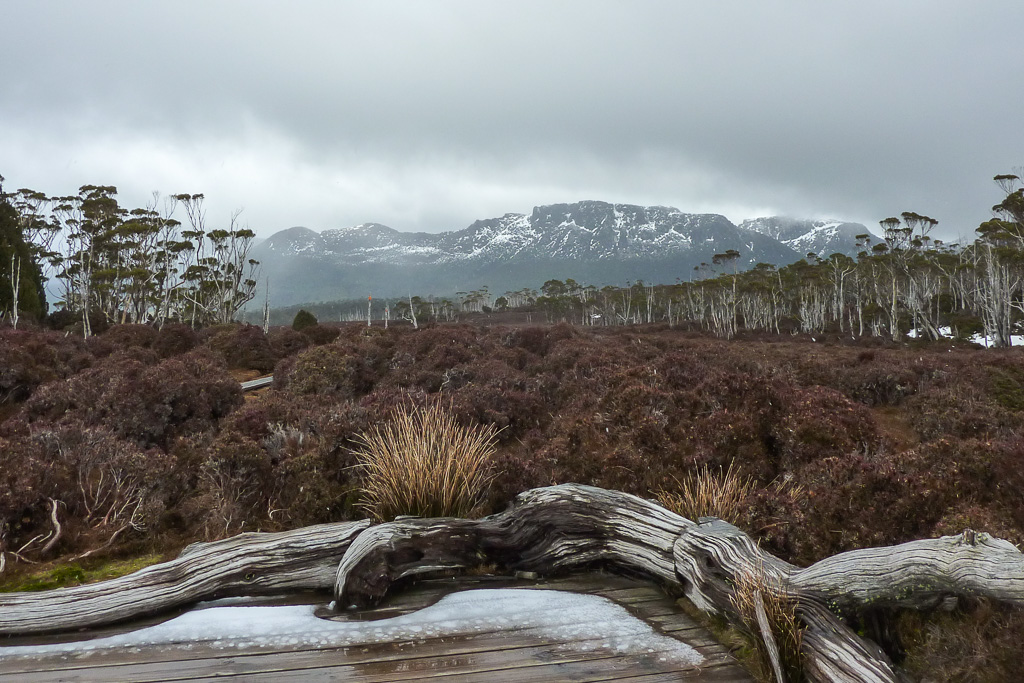 …including what I think is Mount Ossa. Is it? I think it is, but being buried in clouds I’m not sure. 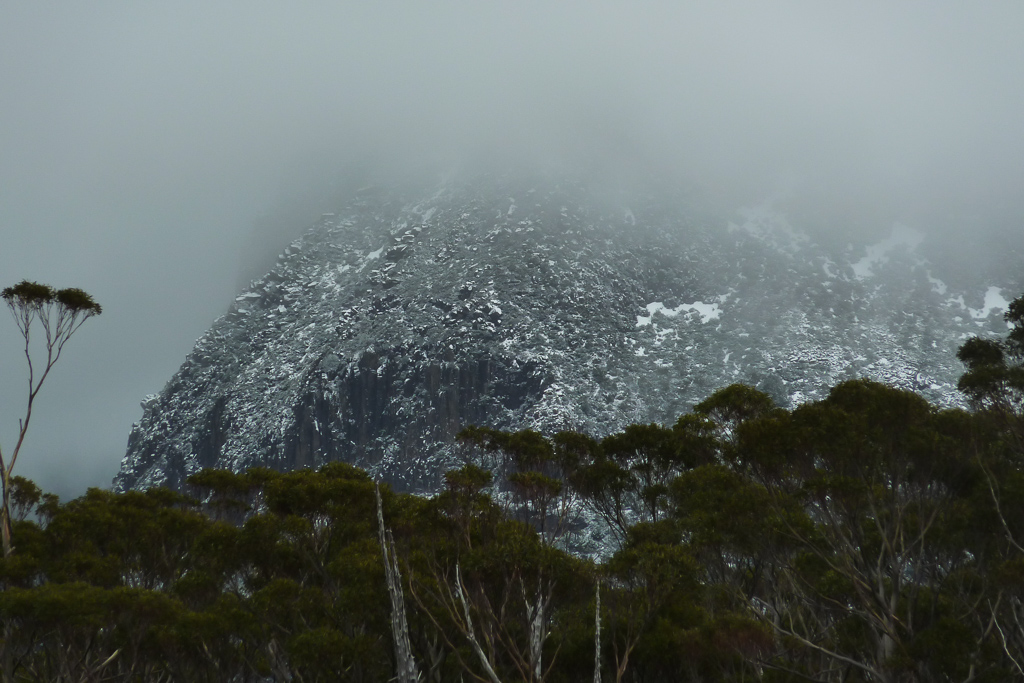 This was also one of my last hikes where I spent some dedicated time taking ‘selfies’. Bloody hell, there’s photos of me smiling maniacally in all sorts of locations. I think I overdid it so much I suffered ‘selfie burnout’. As a result, I reckon I’ve taken less in the last four years than I took on this trip alone. It reached the pinnacle of dumbness when I tried to capture the ‘hiking man standing and not holding the camera’ routine. I was quite particular, setting the camera on a wooden post, finding a focus point and then running to position, followed by stopping and smiling in a calm manner, with the illusion I hadn’t sprinted like a madman.

You know what? This was the sort of crap I was dishing up. Snow was falling and there I was risking hypothermia for something like this… 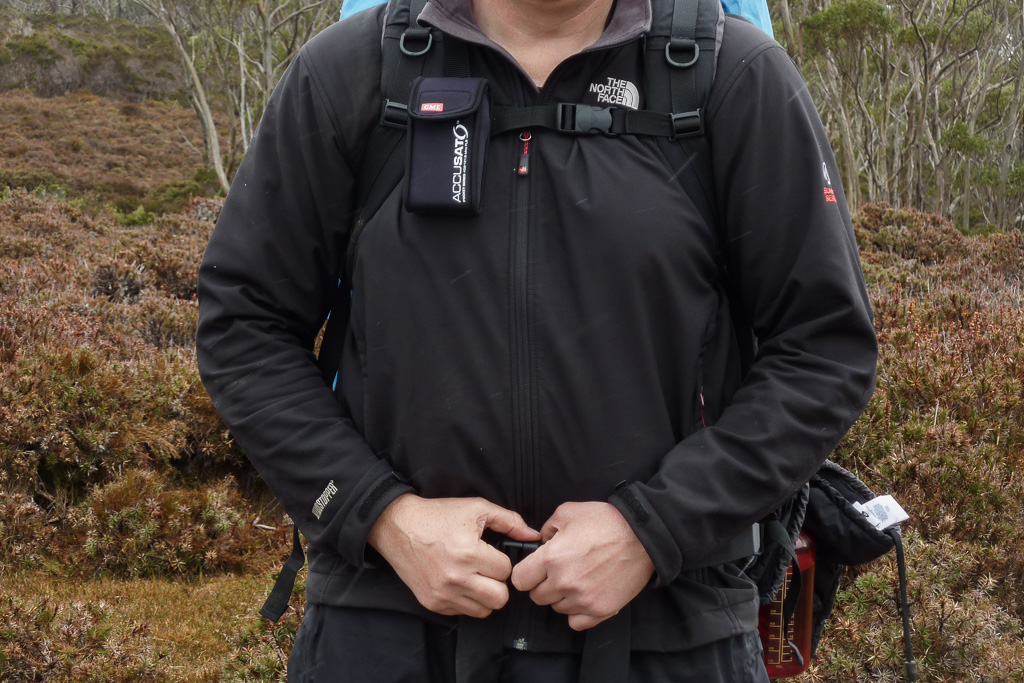 Yes, that’s correct. The photo isn’t cropped. This is how it turned out. I remember standing there reviewing the picture in the wind and wondering, “What are you doing??”

There are a couple of things going on in this picture though, which I should explain. Firstly I’m wearing one of the best jackets I’ve ever owned and I loved it so much I did a post about it. It’s unbelievable, but unfortunately for me its made by ‘The North Face’. Their outfits seem to be owned by every lunatic who walks around the city during lunch hour. I kid you not, but I counted seven TNF jackets in less than ten minutes in Swanston Street, Melbourne the other day. Man, there were the big puffy ones and others like mine. The over-exposure has put me off my clothes!

What else do you notice? A keen eye will observe I’m flexing the ‘V’ slightly. A ‘selfie’ always works better if you’ve flared your lats a little and snapped your pecs to attention. As you can see I’ve adhered to this principle quite well. Last, but not least. I do have a chip in my front teeth courtesy of magnificent England beaches.

There I was in 1975, during a balmy summers day in Eastbourne, Sussex. I’d negotiated the pebbles covered in oil sludge, which regularly comes ashore from the English Channel. As a wave came in I dived through it like an oversized Johnny Weissmuller, but unfortunately misjudged and ploughed face first into the English sand boulders. A chip to the front teeth was the result. I just know you needed to hear that story.

Finally, you thought I was joking about having a shave, didn’t you? No, it’s a requirement of mine for climbing large hills, as I’m more aerodynamically slippery through the wind sans whiskers.

I guess that’s it? I binned the ‘selfie’ business and then fired off a few more shots of my surrounds before moving on…

…and began the steady descent towards Kia Ora Hut. 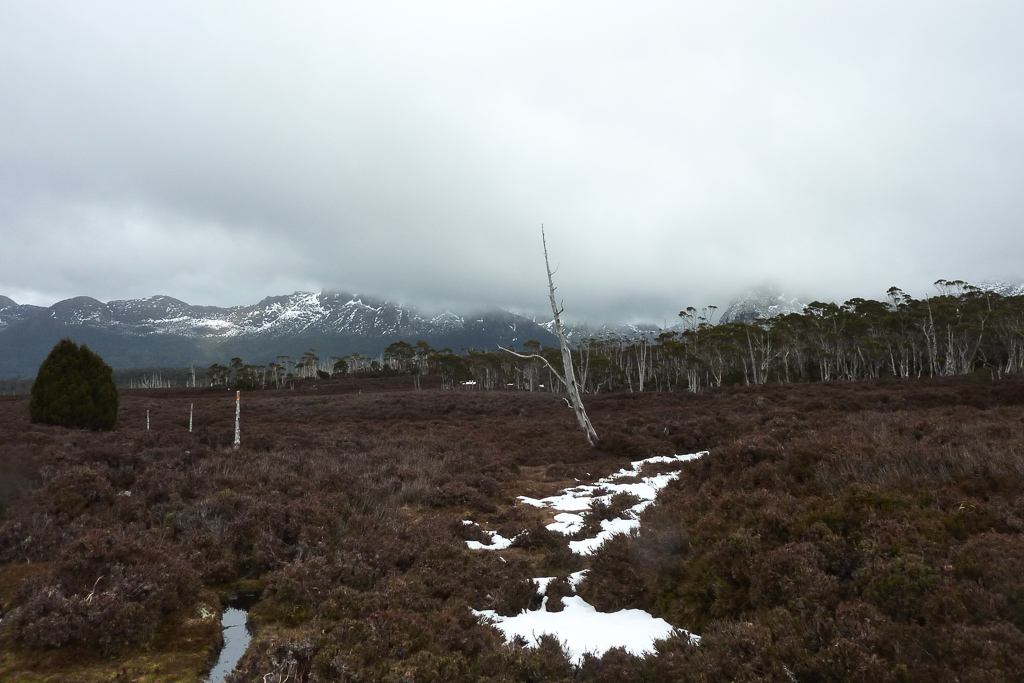 How about one more look of the open land with what I think is the Du Cane Range in the distance…? 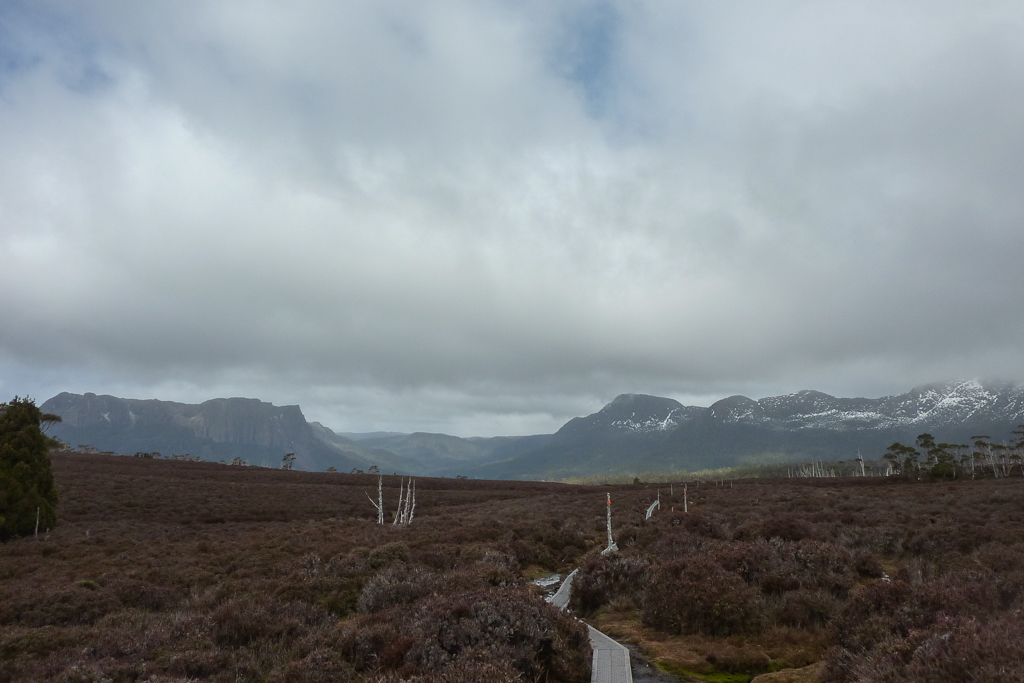 The descent was quite straightforward and within no time I’d reached the Kia Ora Hut. ‘Army Pants Man’ and his mate, ‘Garbage Bag Pack Cover Man’ had set out from Pelion Hut earlier than me and I was half expecting to see them again. Upon arrival at Kia Ora though, they were nowhere to be seen, so I assumed they’d kicked on to the next hut.

It was no big problem though, as yet again I had the place to myself… 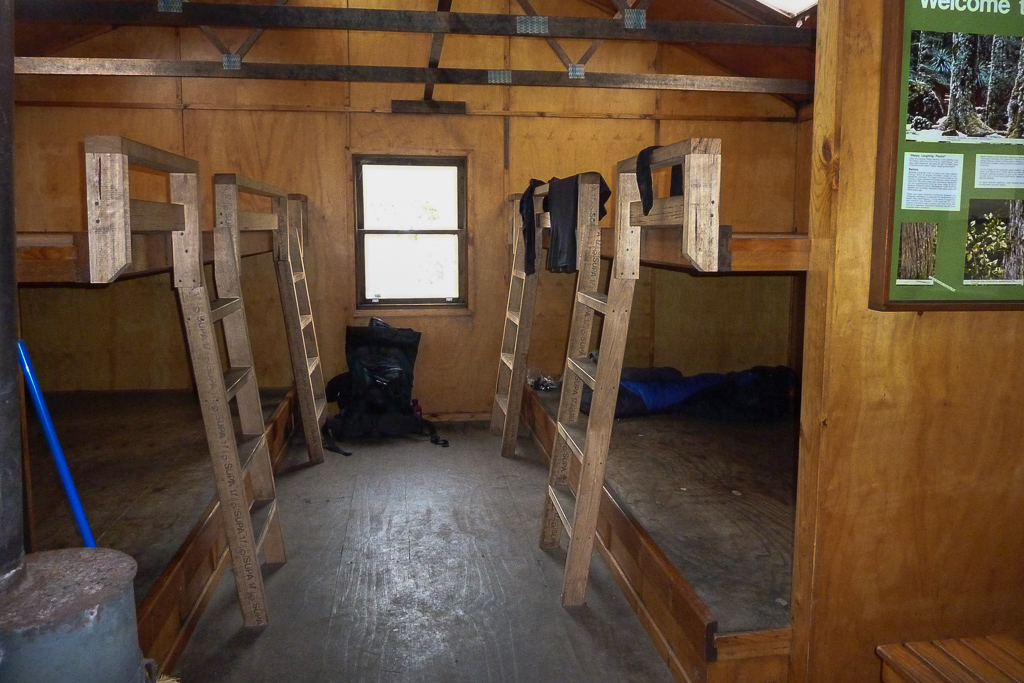 It had been a short day, so I had plenty of time to potter around outside. The clouds were lifting, so the surrounding mountains were in full view. Now, is this Du Cane Range…? 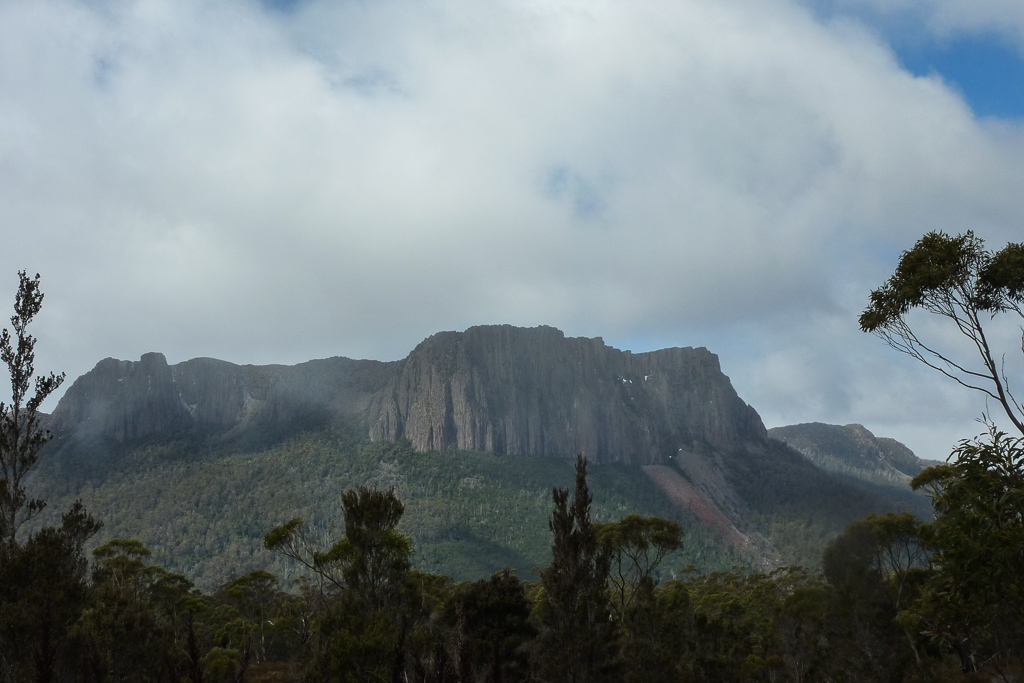 Yet another easy day was done. Yeah okay, the climb to Pelion Gap burnt up a few calories and the gap itself was freezing, but it wasn’t too bad. There’s only a few days to go for this Overland hike, so it’ll be over in no time. I might sneak in a different post next, with some more recent shindigs.

In finishing off, how about a rainbow outside Kia Ora Hut during the late afternoon…? 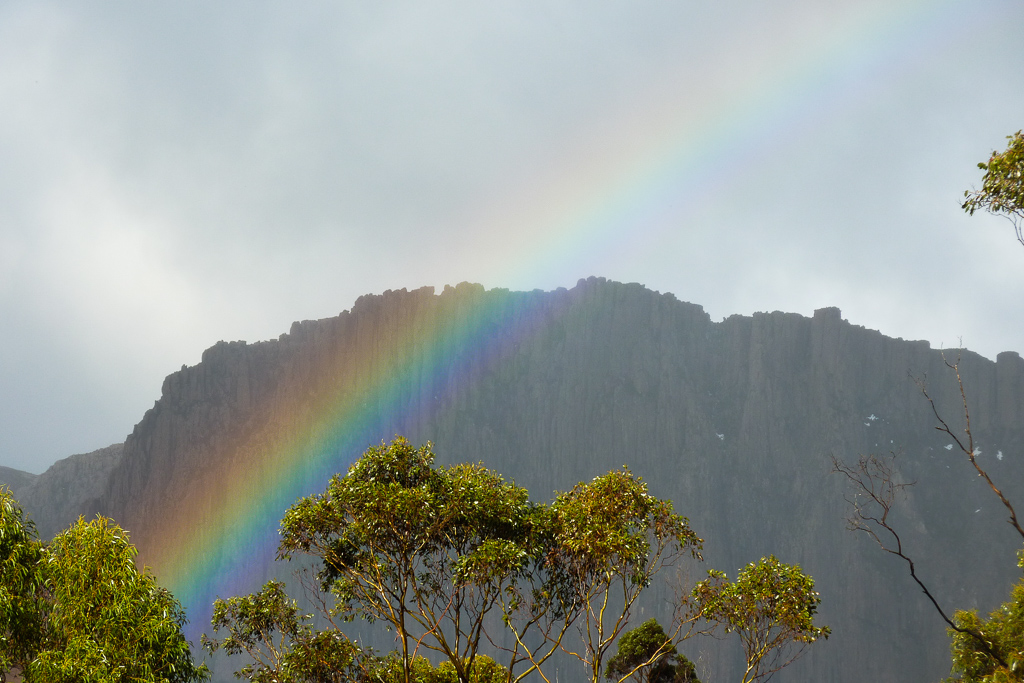