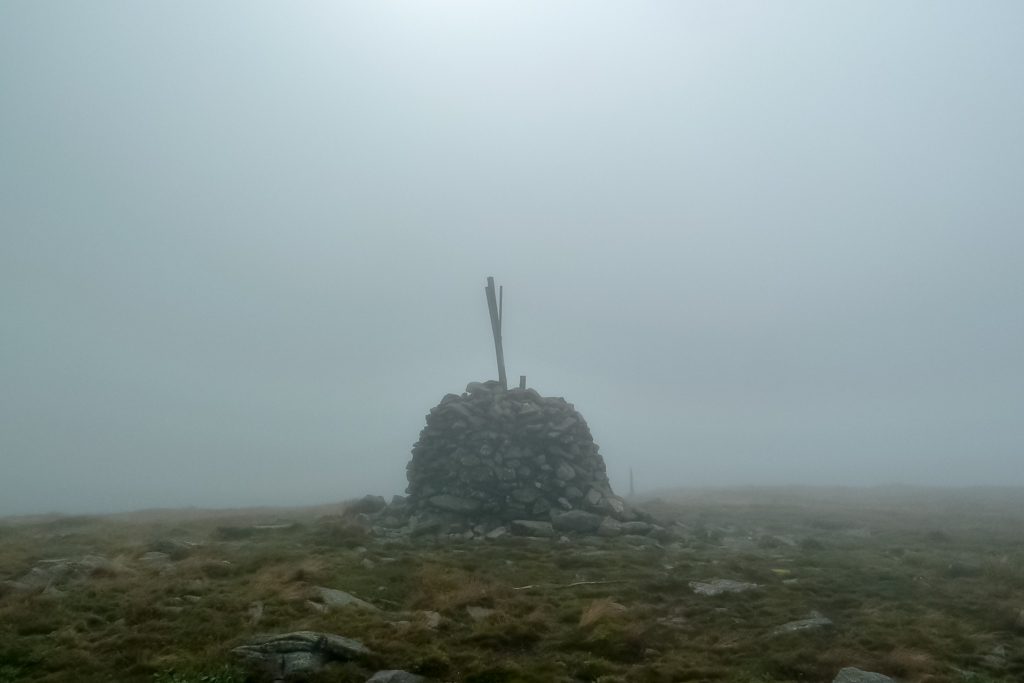 I’ve been a bit slack with the blog entries lately. It’s disappointing how work interferes with the walking, but I suppose I have to earn money at some point (do I?).

The only thing I’ve had to entertain me lately is a bloke I see on my train each morning. He’s a big, bruising sort of bloke who wears necklaces, and has arms that appear to drag along the ground when he walks. What’s interesting is his enthusiasm for a book of true crime stories he’s always reading. The book is arranged in years and he was really getting a kick out of a 1965 entry titled ‘Swingers kids mysteriously abducted and then murdered’. It’s an interesting train trip with this bloke, instead of the army of gum chewers who I also travel with.

Anyway, enough of that. Victoria’s highest mountain is Mt Bogong, which stands at 1986 metres. That’s quite high for the continent that’s flat as a pancake. I’ve thought of climbing it a number of times, but something always seems to come up that stops me, such as polishing my extensive spoon collection.

Finally the weekend was booked in and I was going to be accompanied by Mike Kilo and Double Lima. MK has visible abdominals, which is worrying as a walking companion like this is the enemy of the fat man like myself. How crazy is that movie ‘127 Hours’? Pretty wild story huh? Well, I have an equivalent, which I’m sure could be made into a movie. 127 Kilograms. That’s what I weigh and it could feature my guts slowly rising up a mountain. It’s probably not the greatest movie idea, but the plot is in its early stages. 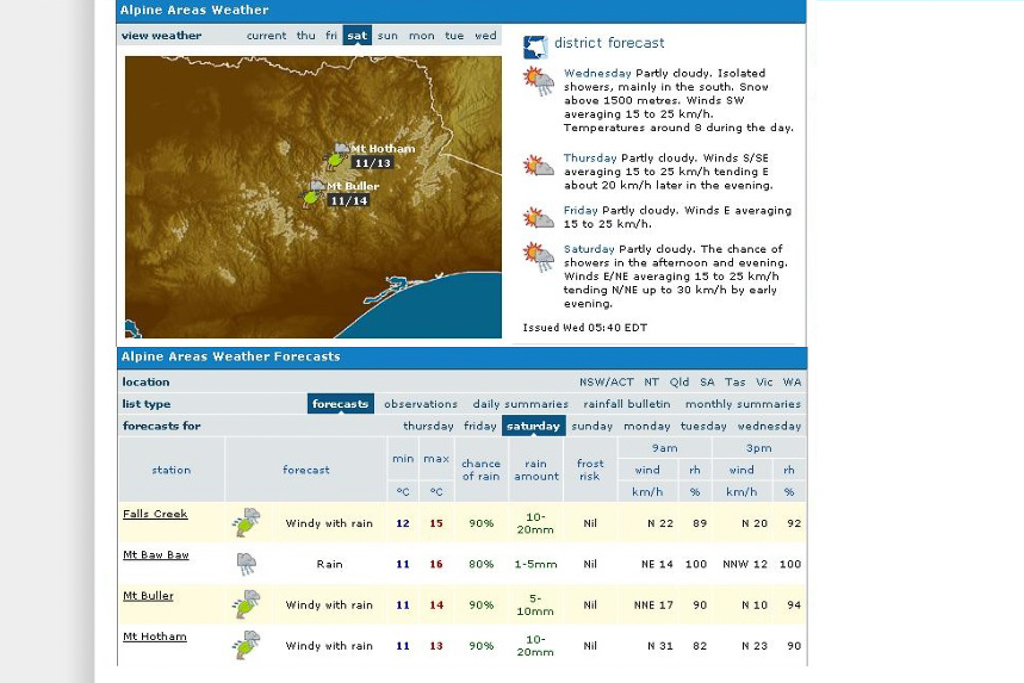 The week leading up to the walk had me eagerly checking the alpine weather forecast. I was a little perturbed to see it kept getting worse. A relevant forecast for Mt Bogong would be nearby Falls Creek and the end result was the forecast above. Wind and rain seemed popular.

Now, I don’t mind inclement weather, but the notes in my book for the walk had comments like,

“…Bogong is a peak requiring respect. A number of people have died on this mountain in the past…steep slopes and cliffs surround much of the summit and it can be very difficult to locate descent spurs in fog…when you climb Bogong take no risks…if the weather looks grim forget the trip…”

Should the trip be cancelled? I thought about it for 0.3 of a second and decided an attempt was worth it for the epic quality alone. If it was too bad then we could always turn back, although even that was unlikely as I need some sort of crap to happen to keep this blog afloat.

There are two ‘normal’ routes up Mt Bogong. There’s Staircase Spur, which had numbers attached to it that I couldn’t get my head around. A 1500 metre climb over 6 km seems steep to me or alternatively the Eskdale Spur with a more gentle gradient, climbing the same height in 8 km.

It’s all good steep fun and MK made an observation, “You will not see any flat slobs on the top.” I was thinking about this comment, as my guts pressed against the belt of my pants. The Eskdale Spur was going to be our route with a night spent on top in the nearby Cleve Cole Hut. We would then return via the Staircase Spur the following day. 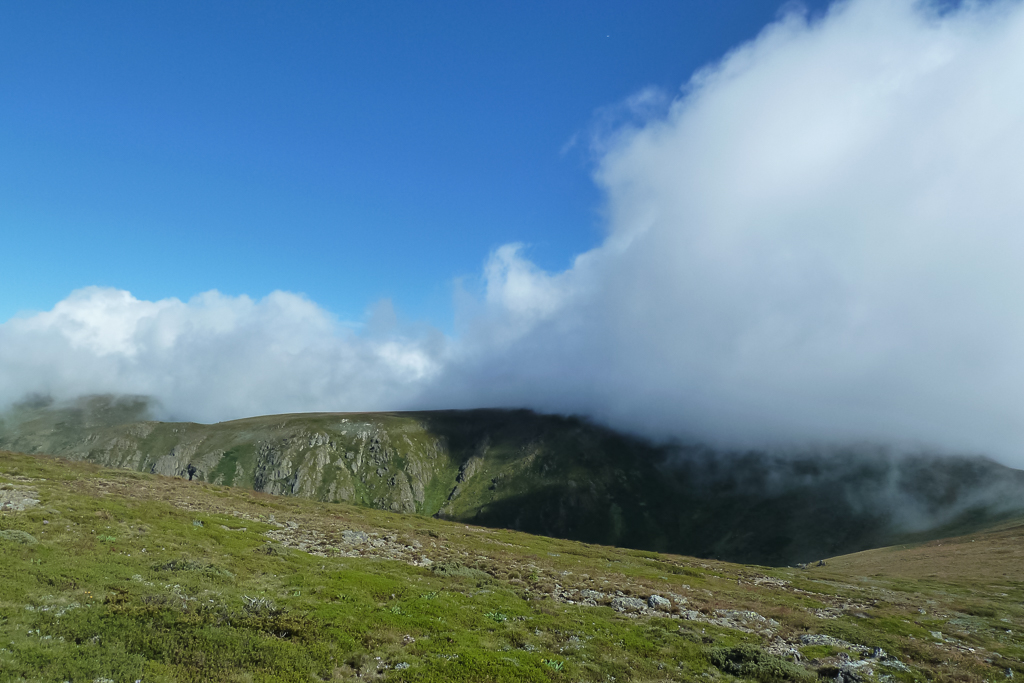 So, there’s not much else to do other than head off walking. It’s a grim weather forecast, but I was still keen to climb the mountain which loosely translates as ‘Big Fella’. Having been called ‘big fella’ for the last 25 years it was time to get to the top of my namesake. In the end this weekend walk had it all. Rain, water crossings, leeches, hiking heroes and hot-pants… 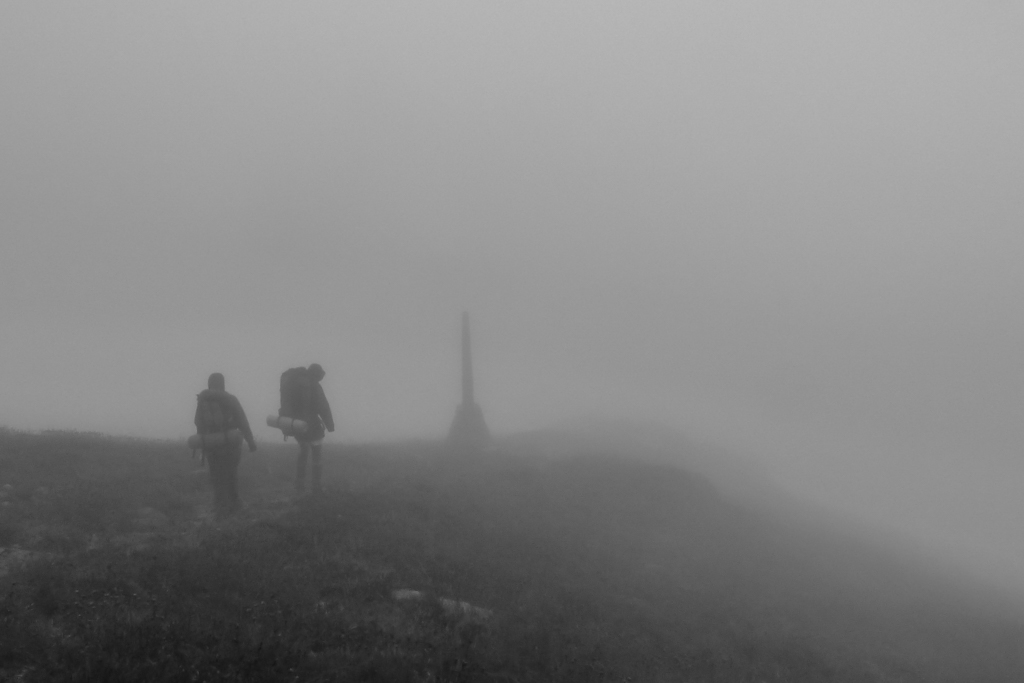