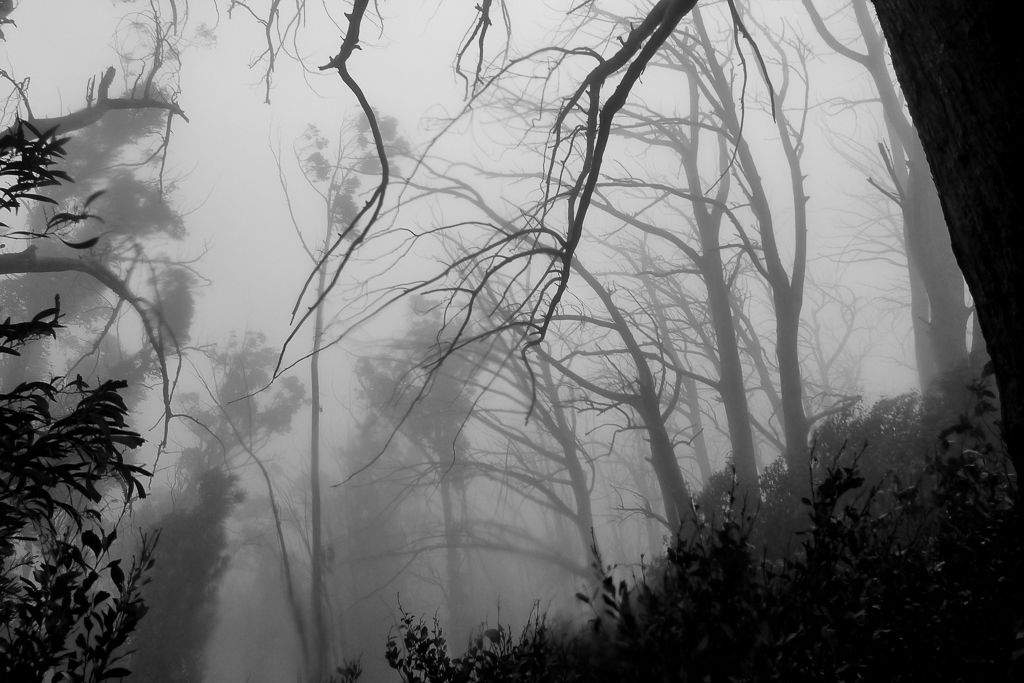 It was a successful drive to the Mountain Creek picnic and camp area near the town of Tawonga, which is about 350 km from Melbourne. It’s a long haul after work on a Friday and we arrived in the dark. The temperature was hot and humid, but rain was in the air as we went to bed. I was hoping to get a good sleep, as the slog to Cleve Cole Hut via Eskdale Spur was potentially lung busting. MK set up what seemed like a circus tent due to its seriously big size. This was acceptable though as it was classified as ‘base camp’.

We settled down to sleep but there was the odd interruption in the night. At first, one bloke arrived on his own in an old Ute and after rustling around set off towards the nearby creek. I assumed he was disposing of a body. Then another group turned up stalling their car in the process. After a billion attempts at turning over the ignition, they abandoned the car and set off into the dark with backpacks on.

Base camp was getting a little weird at this stage. It poured rain all night, and in celebration I began to snore. Not just any snoring though, as I sounded like a Sasquatch who had just been pinned down by a Stepover Toehold. The roaring noise from my gob all night didn’t go down well with my walking friends. I guess they wanted a good night’s sleep before a hard days hiking? Something like that anyway… 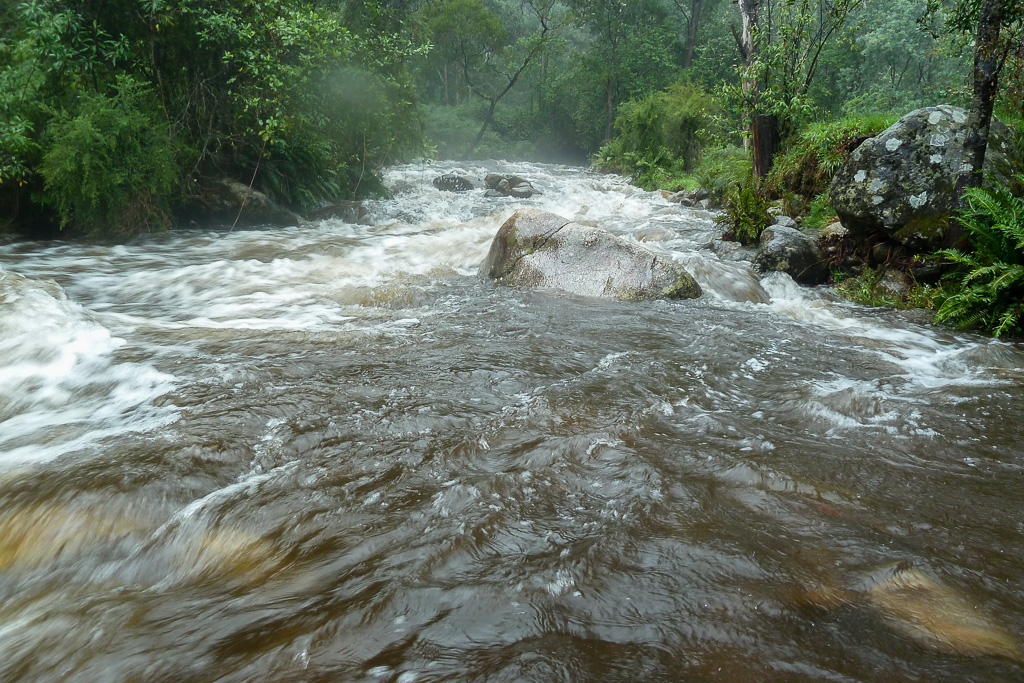 The weather had not improved in the morning and we were resigned to having a wet day ahead of us. It was decided that the circus tent should remain set up. It was base camp after all, which means tents can stay up, right? We were hoping that it wouldn’t get stolen by any filthy animals whilst we were out walking. MK also didn’t want to pack a soaking wet tent into the car, which is fair enough.

We also found the bloke from the Ute who we thought was disposing of a few bodies the previous evening. He was a solo walker in his 50’s who was sporting the ubiquitous ’50 year old walker beard look’ and he was setting off on his own for five days. He was fit and friendly and I felt a bit sorry for picking him as a serial killer during the night.

The start of the walk was at an altitude of 588 metres and our target was Mt Bogong which is 1986 metres. This meant a fair bit of climbing to do in heavy rain that had set in. There’s an initial stretch of about six kilometres walking alongside Mountain Creek before the Eskdale Spur is reached.

The fun and games started almost immediately, as the heavy rain had created rushing torrents of water across the track in numerous spots. The others had sandals, so they ditched the boots to cross these water spots. That’s a great idea which I would have done myself, except I had left my sandals in the car at the campsite. Okay, this is another occasion where I have what I need, but the object is sitting safely in the boot of a car.

We adopted the safety first approach of each water crossing by facing upstream and shuffling across sideways. It seemed to work okay although I was disappointed to have boots full of water within the first hour of walking. I had no spare socks (saving carrying weight, see?) so I was in for a weekend of soaking feet. Hopefully I would make it back before trench foot set in. 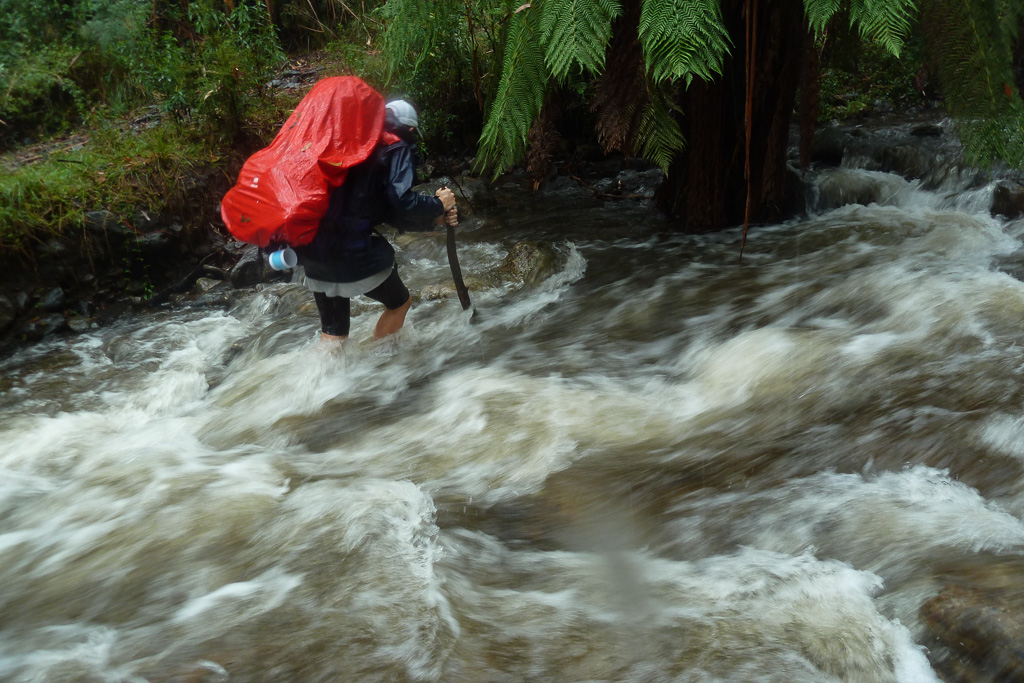 The track was damp in places 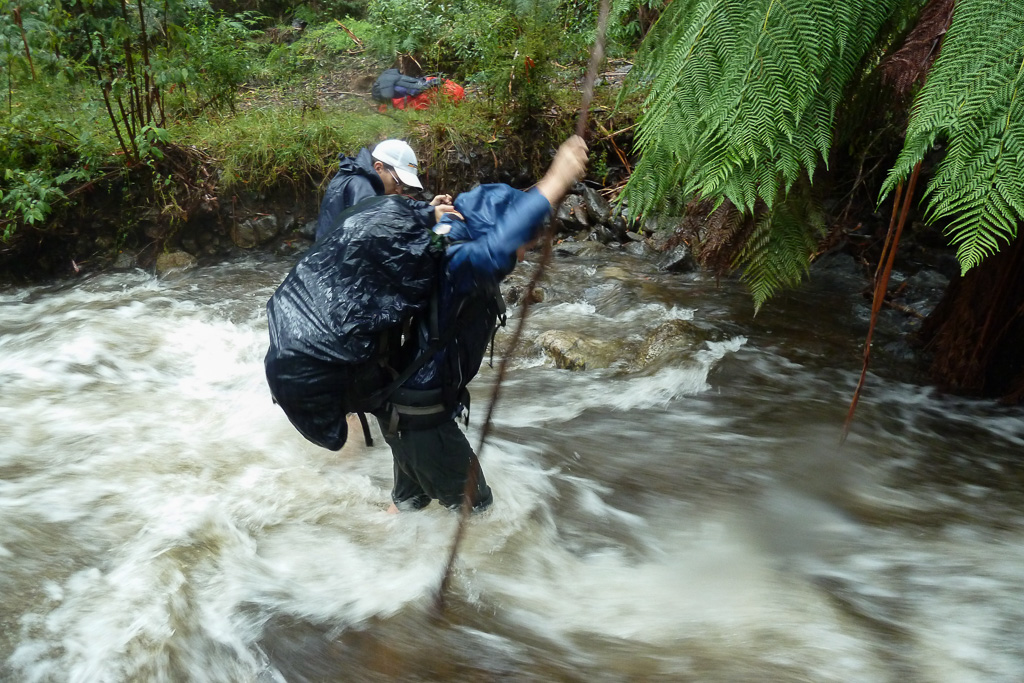 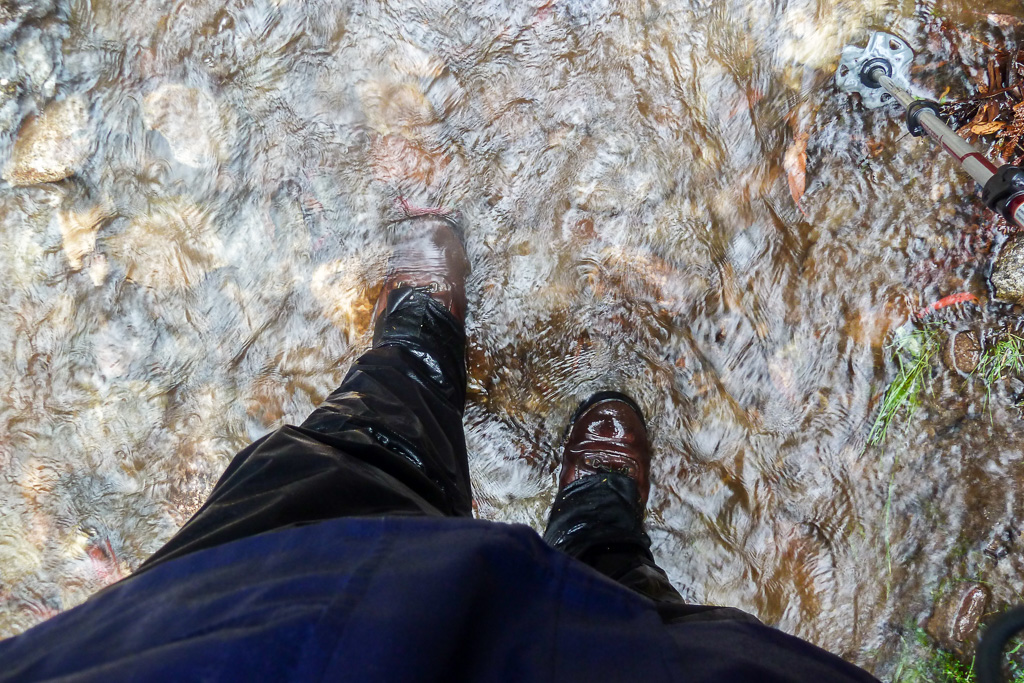 Some sandals may have come in handy

I was the designated photographer as the others didn’t have cameras, so I was under pressure to record the events of the day, but I was a bit blasé with my Canon 7D and Panasonic Lumix TZ-10. The Canon, which is ‘weatherproof’, decided it wasn’t ‘waterproof’ and soon died. In fact I thought there was a problem when I saw that water was inside the battery compartment. Canon 7D + Water = Dead. The compact Lumix was the last resort now and I gave up trying to keep the lens dry. All the photos of the trip were taken on this camera and to hell with trying to fix them up in Adobe Lightroom. They’re wet and that’s it!

We had our first snake sighting fairly early on. A small black snake was in the middle of the path, but he appeared to be showing off a little as he was upside down. A closer inspection revealed him to be dead. I’m not sure what he had died of, but it may have been drowning. It was whilst chuckling about the upside down stunt snake that I spotted another one. This time this one was breathing, but I have no idea what sort of snake it was. A long black one? Is that a description? 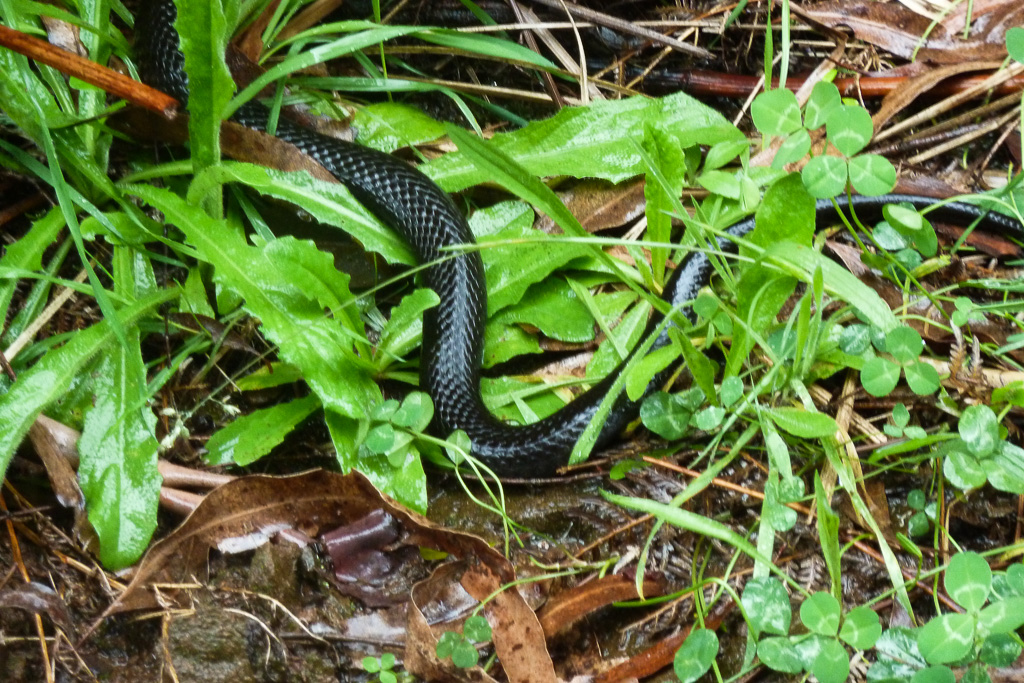 It’s an out of focus snake

On we walked on a constant gradual incline. By the time we reached Eskdale Spur at 1120 metres elevation I was puffing like an old locomotive. It’s at this stage the walking really begins as the track disappears straight up into the forest. Visibility was minimal due to low cloud and rain and in some way that’s a good thing. It’s not nice seeing how far one has to climb!

The others set a solid pace and I was left trudging at the back on my own. It was quite eerie as the wind had picked up and trees were being blown around. At one stage I heard the distinct sound of a loud ‘crack’ and then an almighty ‘crump’ in the forest as a tree came down somewhere. It was disconcerting, although there was a bonus in that it didn’t land on my bonce. 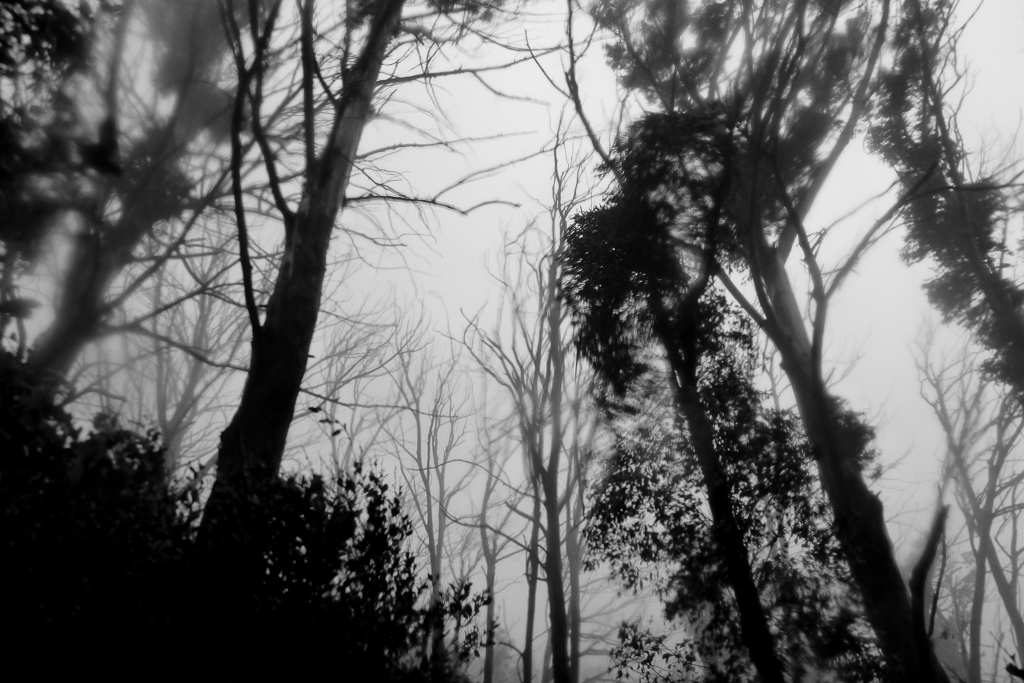 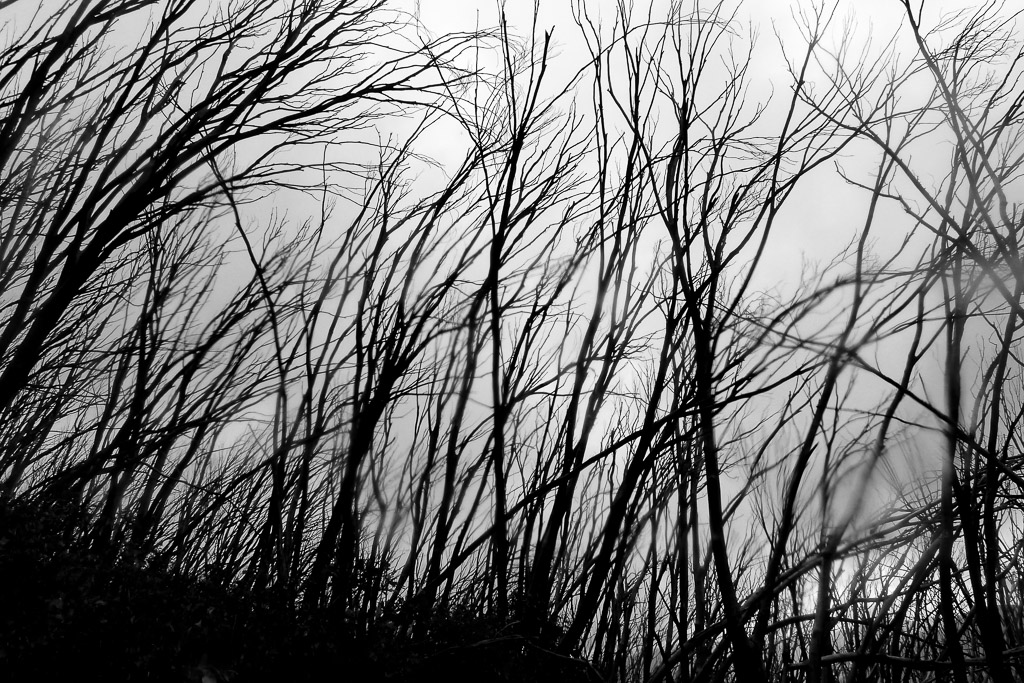 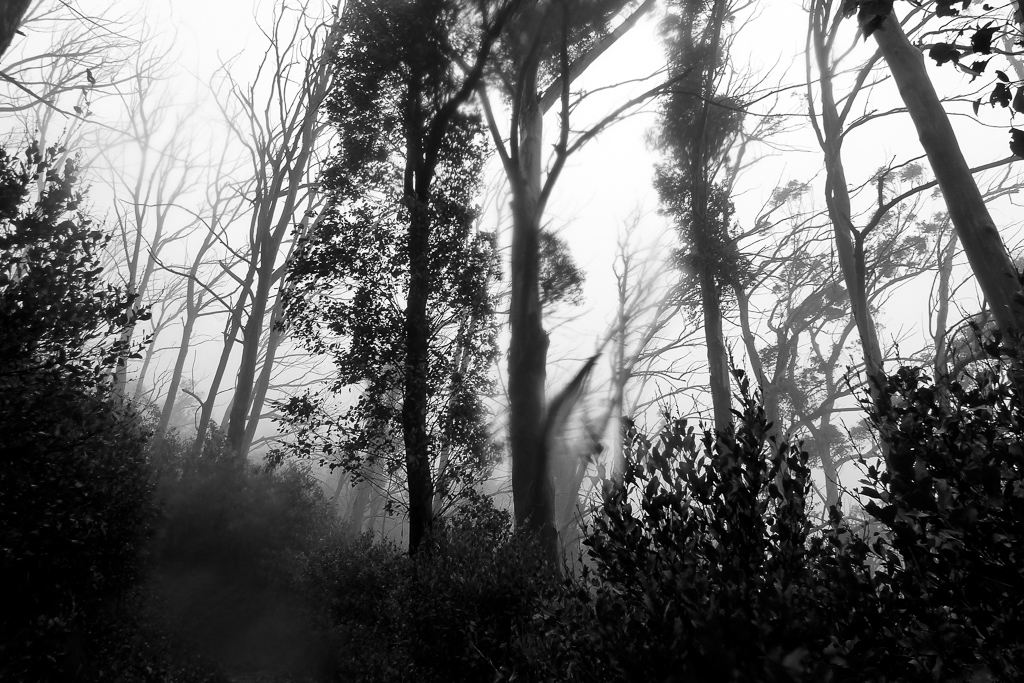 We agreed to meet for a lunch stop at the new Michell Hut, which had been rebuilt since the previous one had burned down in the big Alpine fires of 2003. The hut is at 1620 metres and I was constantly checking the GPS as the metres ticked off.

I stopped by a small stream at 1340 metres to refill my water bottle. As I was doing so I caught sight of what appeared to be a slug on the side of my hand. On closer inspection I observed a leech that was full to the brim of my blood. Cheeky bugger! Like a good leech, I hadn’t felt him at any time whilst he was sucking me dry. I managed to flick him off but I didn’t bother to kill him. He had done a mighty fine job so I let him go. I now had to contend with the standard small sore left behind that bled for the rest of the day! 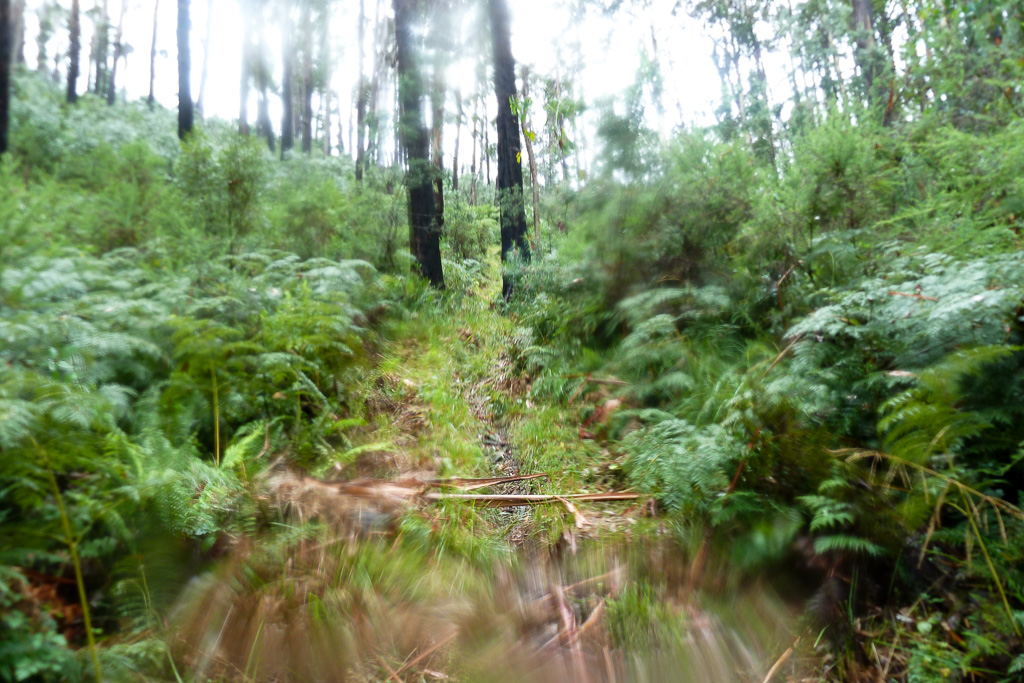 The camera is officially wet 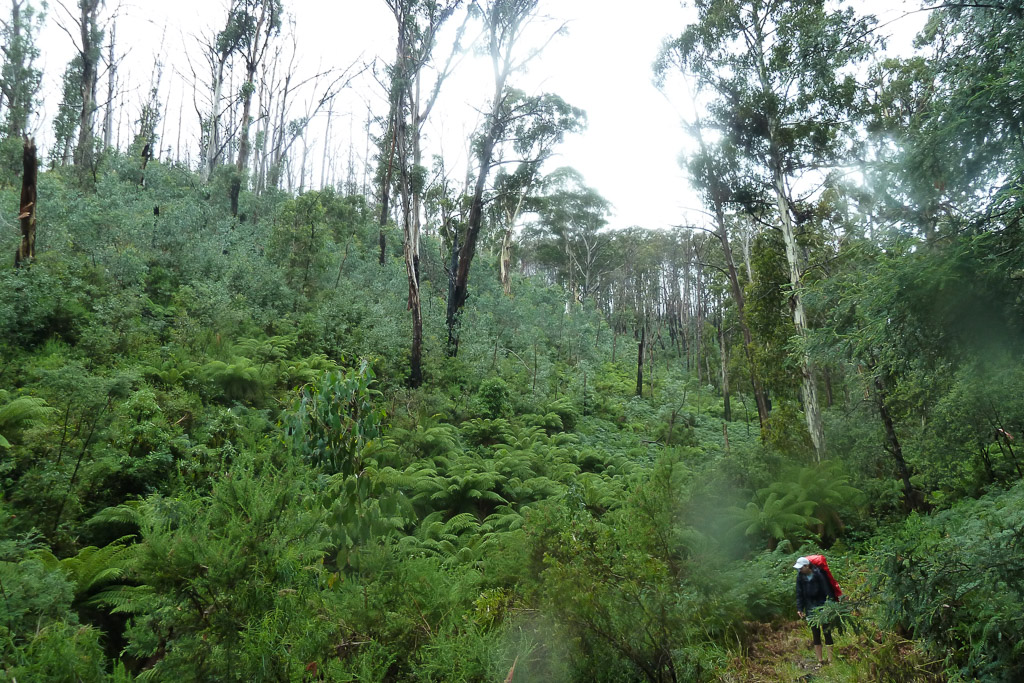 It’s at this point that the trusty Lumix also stopped working. It developed a problem of being unable to focus which is quite a problem for a camera I think. I was quite worried about my ability to record the rest of the trip, but I did have one more camera up my sleeve. When things are desperate one has to turn to the Nokia N93 for a bit of phone camera action.

I was wary though, as I didn’t want my phone waterlogged as well so I held off getting it out until I made it to Michell Hut. It really was a relief to see the hut suddenly appear out of the forest. It’s a great looking new hut which I staggered into to find the other two had been waiting the odd hour for me. They had the fire going and were very relaxed reading the paper. I wasn’t sure what I was doing, but I was thankful to sit down in the dry and have a snack to eat. I would have been happy to stay at this location, but the plan was to still continue on up and up.

It was a shame to leave this nice hut behind, but on we ventured. I was also instructed to keep up as we approached the tree line and were about to venture into the cloud. I was mildly blubbering at this stage and it was a pity the camera wasn’t working as the landscape turned alien outside the trees. In the open terrain there were strong winds and low clouds which reduced our visibility. We were now relying on a series of snow poles to help guide us upwards. 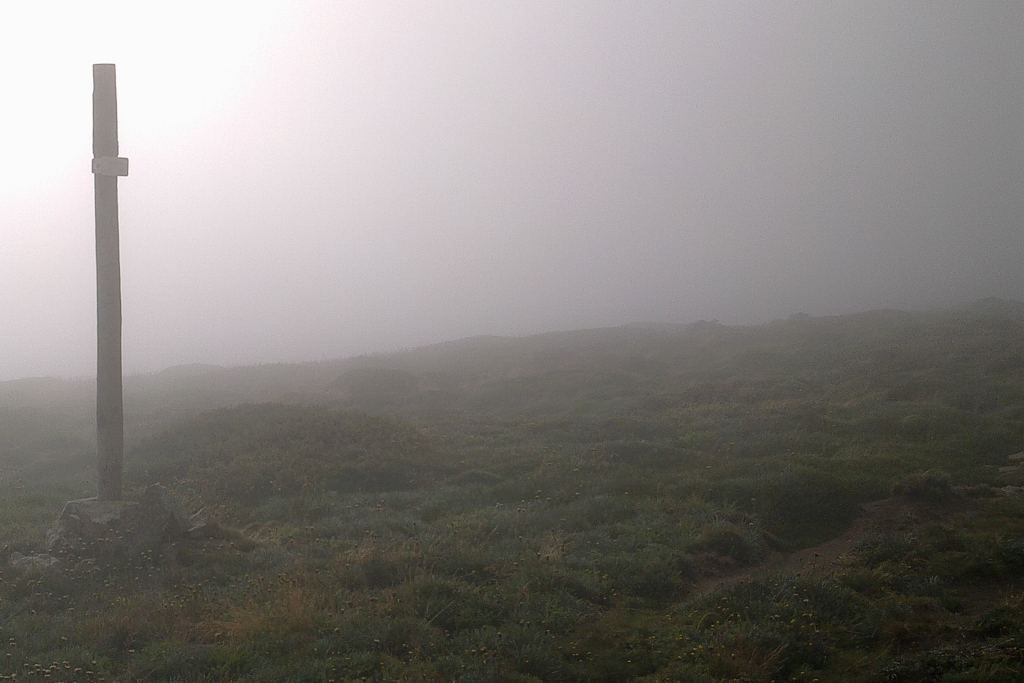 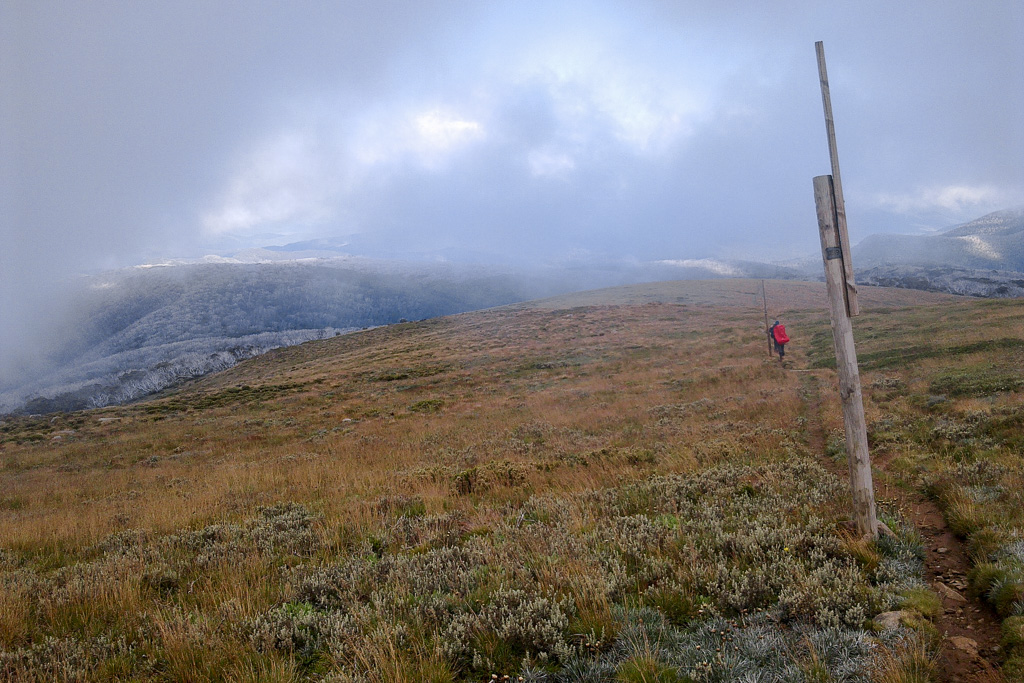 It was hard to judge the distance of the climb at times. With every snow pole another would loom ahead through the mist, each one even higher. This continued until the ground flattened out. We were now at 1940 metres which meant the summit wasn’t too far away. After a quick chat, we decided it made more sense to come back the following day. Hopefully with clearer conditions.

Now it was time to reach our destination for the night. Cleve Cole Hut was only about four kilometres away and the walking was now easy. Although the ground was fairly flat, at 1900 mt the wind howled as we passed places such as ‘Hell Gap’. I was feeling pretty spent, but we were making good time with the lure of the hut pushing us on. I was wondering if anyone was there, but that was confirmed when I saw smoke coming out of the chimney of the hut. 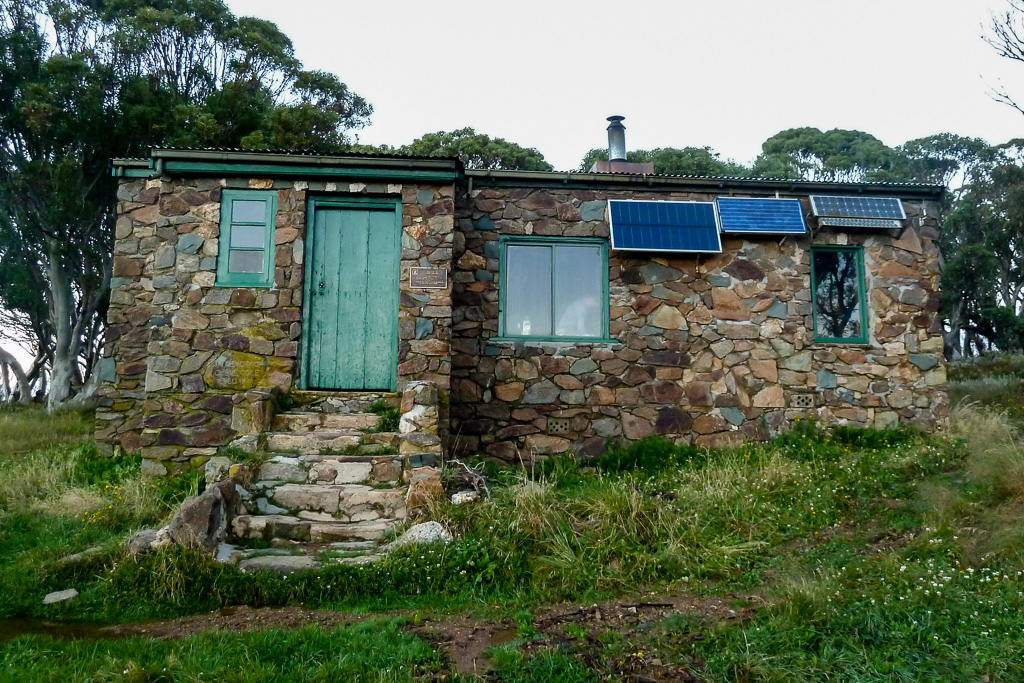 We had arrived to find four others in the hut already. They were certainly settled in with what appeared to be a million clothes hanging up over the fire. They were an interesting bunch as well, decked out in their thermal underwear. One bloke was a bit disconcerting as he had shorts with a gaping hole in the front of them. I was too frightened to look at him directly, in case an unwanted pecker made an appearance. MK assured me he had blue underpants on, but this was no time to take chances.

There was a hint of ‘hiking hero’ about this group. They were friendly enough, but their observations were a bit out there. Do you realise that you can work out who is a regular at McDonald’s, when the person can order without looking at the menu board? No? Well, you do now. Do you realise victims of domestic violence will just meet someone else who will treat them the same way? Interesting… Do you realise that ‘fair-weather’ hikers are wimps who don’t know what walking is all about?

It was all getting a bit much when after mentioning I walk most weekends I was greeted with the response, “What? From pub to pub?” I can laugh at myself, but there are some rules. I take the piss out of myself, so I don’t need others to do it for me! It’s tough work this hiking business when one doesn’t meet the lofty expectations of others who shoot fast and loose with their opinions.

It all made me want to sit down and dream of having a hot meal of couscous with chorizo sausage and vegetables washed down with some red wine. Oh, sorry. That’s what we had for tea to the disapproval of the others eating their re-hydrated meals. “What? Drink? I’m having an alcohol free weekend!” implored one of them. Umm.. It’s not actually for you, so you don’t have to worry.

What a day, with a total of 17.66 kilometres walked and total elevation climbed of 1427 metres which is more than enough for me.What was in store for the next day? All I wanted was some dry weather, as I was going to be spending all night just drying my things from the soaking ascent… 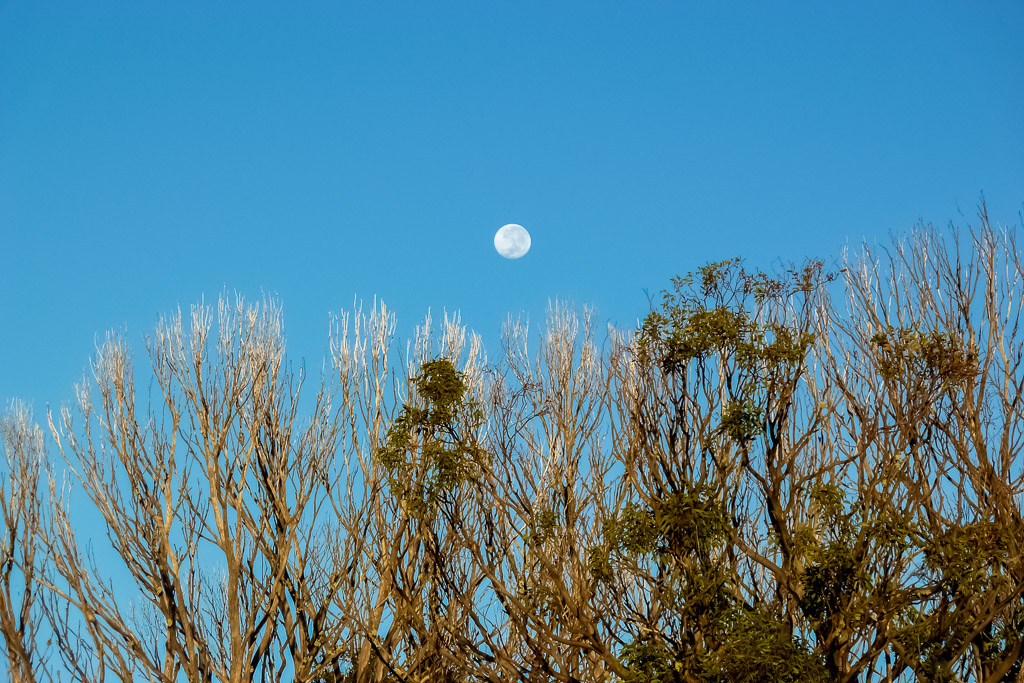