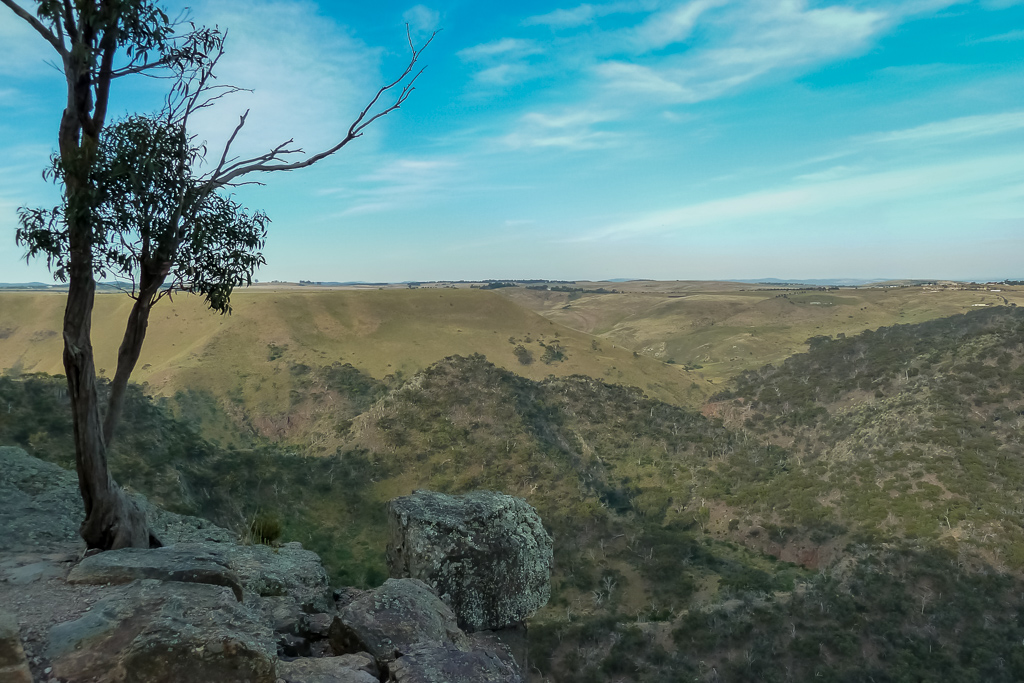 I should start this blog entry by saying I’m not being paid by Glenn Tempest to refer to his book ‘Daywalks Around Melbourne’ every second paragraph. It may seem that way, but it’s not. When I started to look at bushwalking books I found his to be the one with best layout. Complete with nice clear maps that are easy to read and understand.

I love the pineapple pieces in Cadbury ‘Snack’ chocolate and a good map. Probably in that order I think. Actually, when I was in the Army, I thought all anyone ever needed was a fast car and hot chicken. How times have changed. The chicken is okay, but cars and driving bore my man-cans off. Anyway, if you’re wondering where I’m going with this, be aware it’s just filler whilst I’m trying to think of what to write in the next paragraph.

That’s better. Now, the next walk involved a return to Falcons Lookout, Werribee Gorge State Park. It also has a side-trip to some place called Ingliston Granites. This is a bunch of rocks sitting somewhere, which are apparently quite nice to look at. Yeah, I know, pretty lousy description, but that’s the best I can come up with.

The walk is not very far from Melbourne, so we were happy to start late in the day. I was hoping to start later, as it was boiling as well. The temperature was above 30 °C and I’ve previously confessed I think summer sucks. I prefer rain and freezing winds in my face, whilst walking. It seems more epic and interesting, plus it also fits my ‘glass half empty’ principle. You want some misery? Here, have some driving rain to the face big boy. 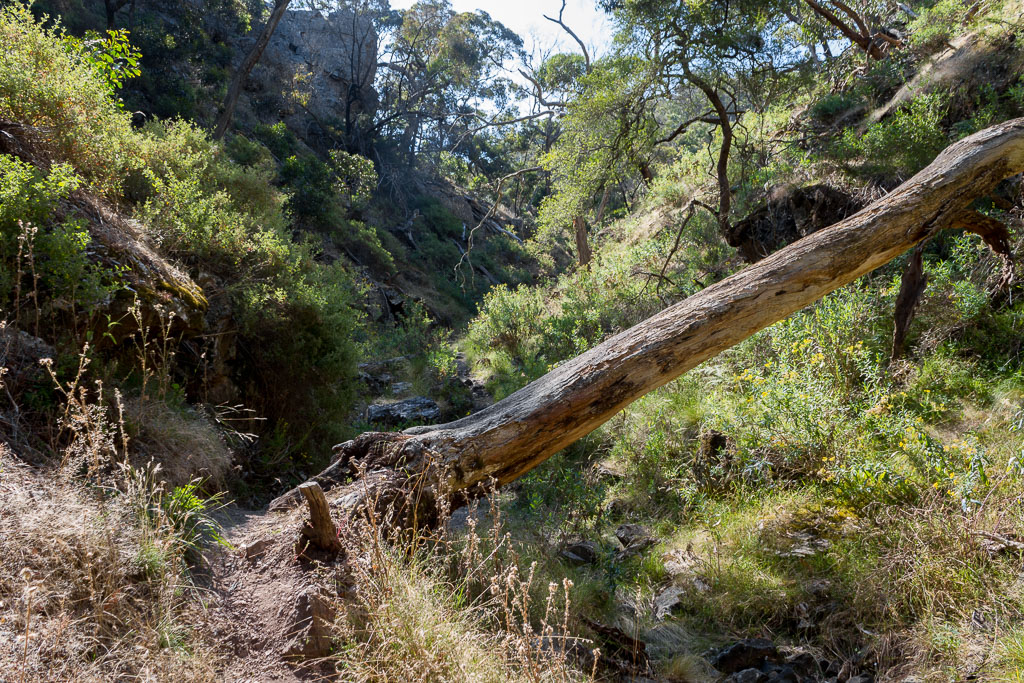 We arrived at the Falcons Lookout carpark and I noted how hot it was when I put on the pack. Lucky this walk is graded as ‘easy’ in my trusty guide book. The walk begins by descending into Ironbark Gorge and it didn’t take long before I wished I’d brought my walking sticks. Well, I did have them, but they were in the boot of the car, as I didn’t think I needed them on a short stroll. Again, I think I stuffed up, as my knees were creaking on the way down.

I had an excuse to stop on the way down though, as there are remains of an old stone hut used by railway workers at some stage. I have no idea how long ago, but I don’t think railway workers have stone huts built for them these days. I’m not sure how stone huts fall down either, but this one was definitely in ruins. 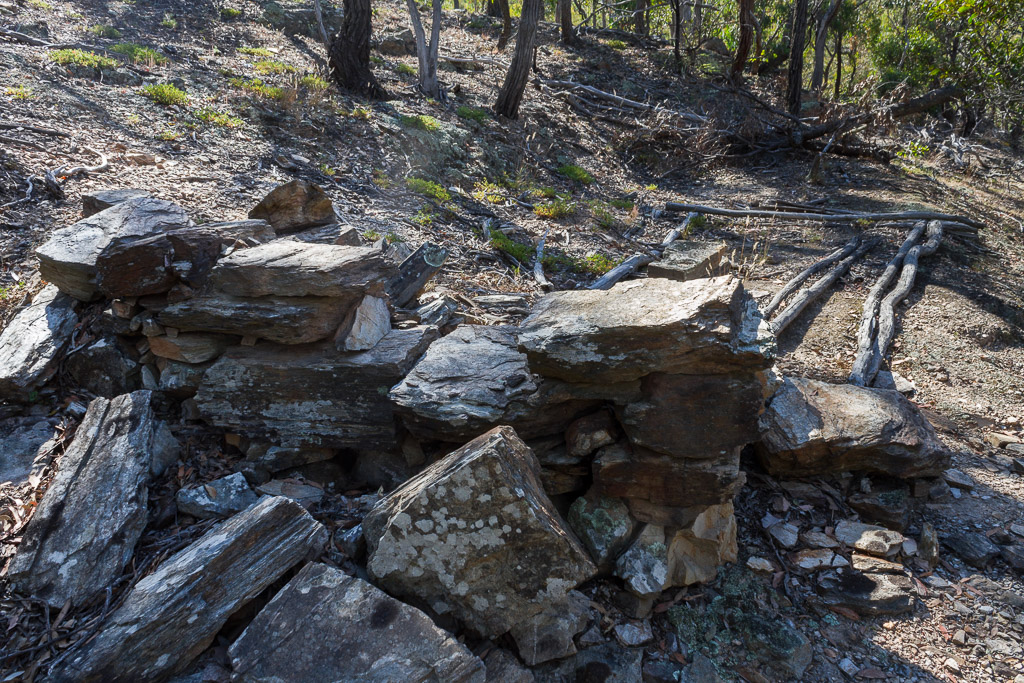 Ironbark Gorge is pretty rough and rugged. I guess it’s the terrain one expects when it’s from the Ordovician period of 430 to 500 million years ago. That’s quite old I think, and I’m sure you’re impressed by my knowledge which is off the top of my head of the Ordovician period. Google? What? No…

I began to feel the effects of the heat and I felt insanely lethargic for such an ‘easy’ walk. Literally from the first step I was puffing and mildly dying. In my running days I used to know if I was going to have a good run within the first 100 metres. Either I was immediately gliding, or I was hitting the ground like an elephant. I was getting the same feeling on this walk. The elephant had kicked in and I was suffering quite a bit. 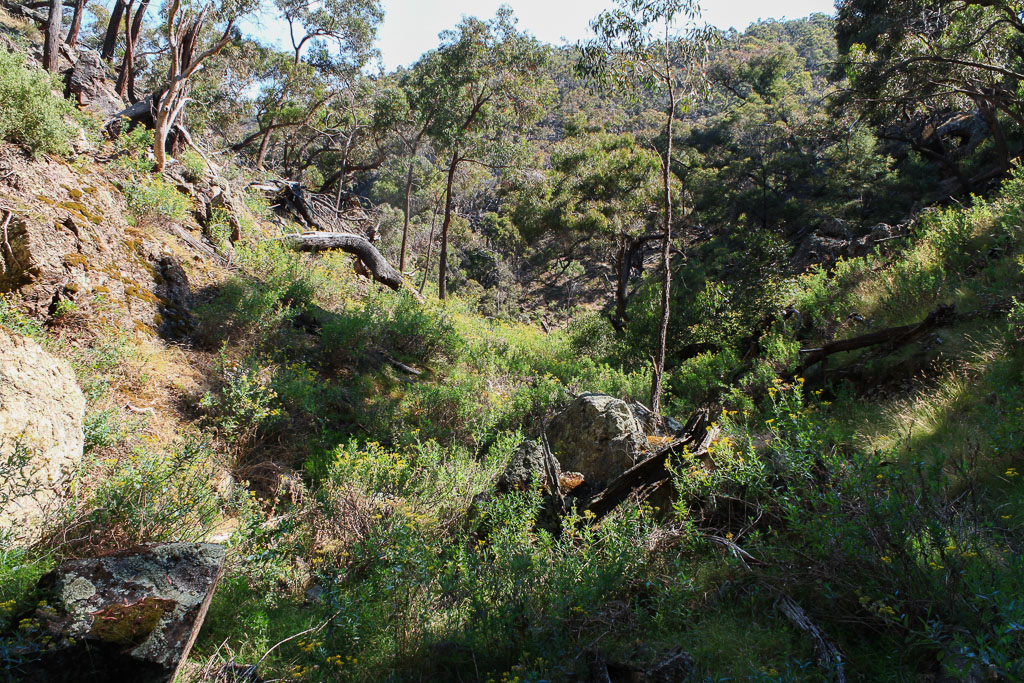 Ben had long vanished and I assumed he was already at the lookout. After descending there was the next logical stage, which was ascending. It was quite peaceful being surrounded by dozens of butterflies through the gorge, but I was noting the lack of oxygen. It would have been nice to have a breeze, as I was just sucking in hot air and the tap had turned on in the sweat factory.

I was starting to drown with salty liquid going into my eyes. My hat wasn’t soaking it up and I’ve thought before why bushwalking hats are not made out of kitchen sponges. Surely that would work? Sponges are light as well, so the head shouldn’t feel too crushed. Soak up the sweat and squeeze. How good is that? The top of the sponge hat could have a bit of a brillo surface, so it could double as a scrubber for the hiking cooking pots. Yeah! 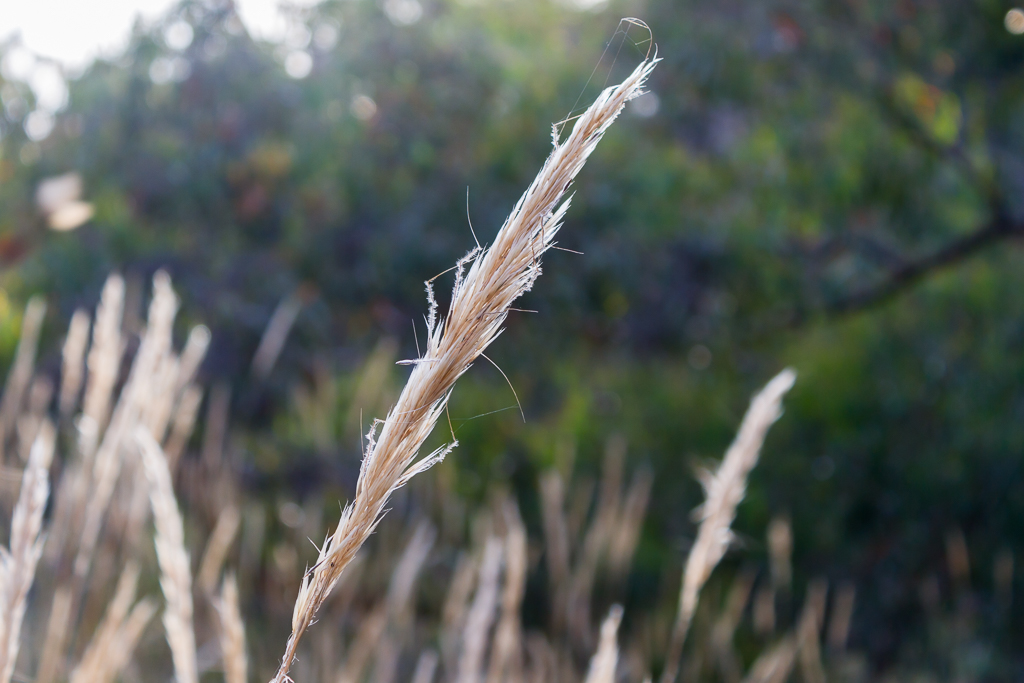 I was making heavy work of ascending and was surprised to come across Ben half way up. This wasn’t in the script and especially when he said, “I’ve had it.” We were both in the land of hurt and I began to curse the ‘easy’ grade write up in the book. I guess it’s ‘easy’ if one is fit and the temperature is not over 30 °C. Well, we both dug in and ambled up, whilst I cursed my hat wasn’t made out of a bright, blue sponge.

We reached a turn off to Ingliston Granites, which I was glad to see as Falcons Lookout is only 5 minutes walk from this point. A short downhill section and then we were greeted with the path vanishing into thin air. We’d arrived at the unfenced lookout, which had a magnificent view. We sat down on rocks which were warm from the sun and felt a cooling breeze to the face whilst looking high across Werribee Gorge.

As I dropped my pack I was aware my shirt was soaking from sweat, but the view took away the pain a little. I couldn’t do much more than utter, “C’est magnifique.” Ben couldn’t do much else, other than reply, “Mais ce n’est pas la guerre.” Very, very true, “C’est de la folie.”

Well, now it was time to get to the important stuff. A cool drink, some sandwiches and a perusal of the 2011 IKEA catalogue. We both liked the Utmarkt turner for $1.49 on page 290 and the Favorit cookware looked okay as well. 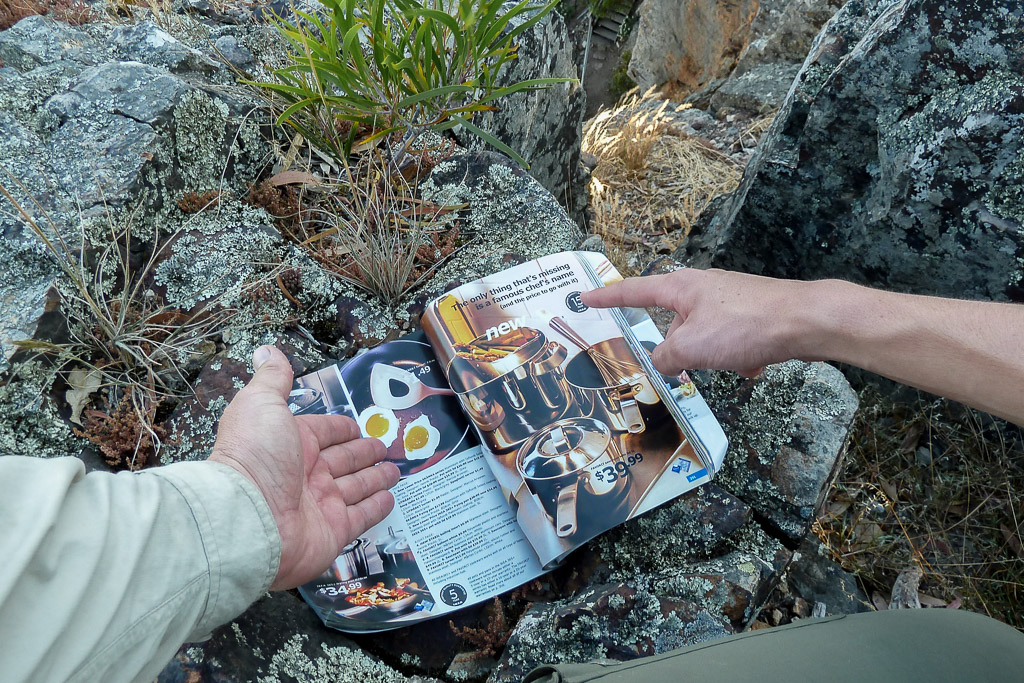 In the back of my mind the additional walk to Ingliston Granites had been put on the back burner. The ‘easy’ walk had killed me and I was happy to stay at the lookout for an hour or so before heading back. I wasn’t sure how far the walk was from the car park as the GPS had conked out.

I have a Garmin GPSMAP 60CSx, which is quite good. but it has an annoying habit of switching off for no apparent reason. Different batteries make no difference and there’s talk on the internet about needing to put paper in the battery holder to make it tight as the connection can get lost. Huh? Who’s manufacturing this crap?

I noted after turning the GPS on again, the odometer told me we’d walked 12 km. Yeah, that’s a bit of GPS comedy right there, as it we’d only covered about 2.5 km at the most. I find Garmin are great, but don’t think dealing with them by email to report a problem is a simple process. They like to use the ‘don’t reply’ method of customer service. Yeah, in the days of mail one could get away with that. “What? You sent a letter? We didn’t get it!” Sorry, but that doesn’t work with this new method called email any more.

Anyway, besides groaning there was the view to look at it and it was still great. 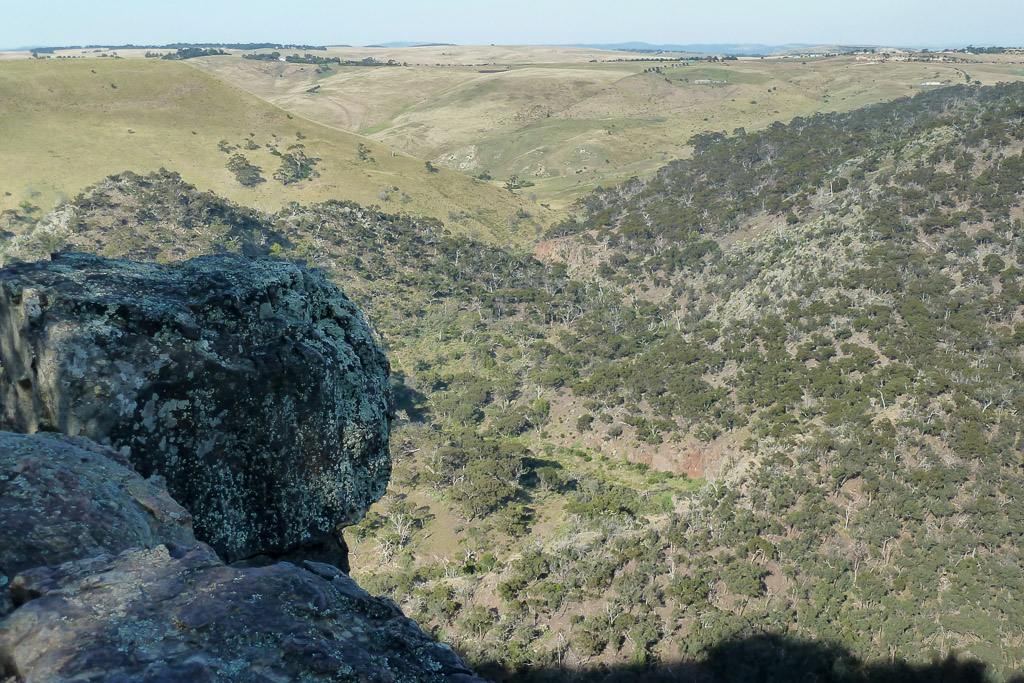 Falcons Lookout is a rock climbing area and I can see why, as the cliffs are vertical. I did discuss with Ben whether I’d survive if I jumped. He thought I wouldn’t, even when I pointed to a couple of soft looking trees down below. He did point out the rather large rocks, near the trees that would be hard to negotiate in mid air. Things are never easy are they? 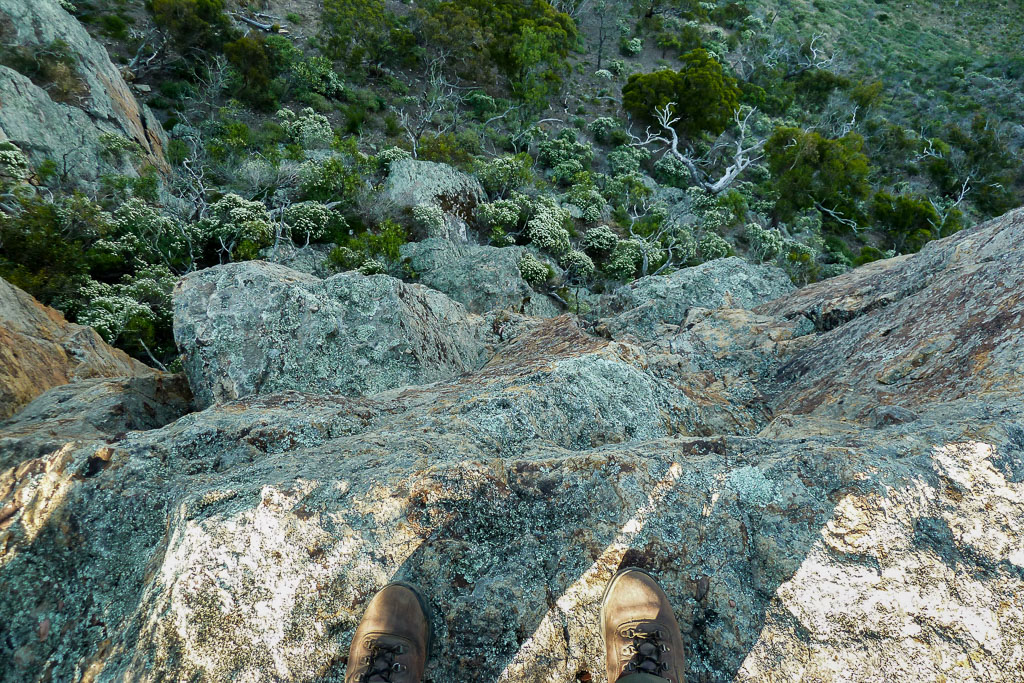 I’m not sure how long we sat at the lookout, but it was for over an hour. The sun was slowly sinking and there was a nice warm glow to the sky. It was hard to think about leaving, as the more we lay around, the harder it was to get up. I spent some time lying on my back taking photos of the surrounding trees and sky. Lying on the heated rocks was quite good, as it gave me a chance to dry the back of my shirt. 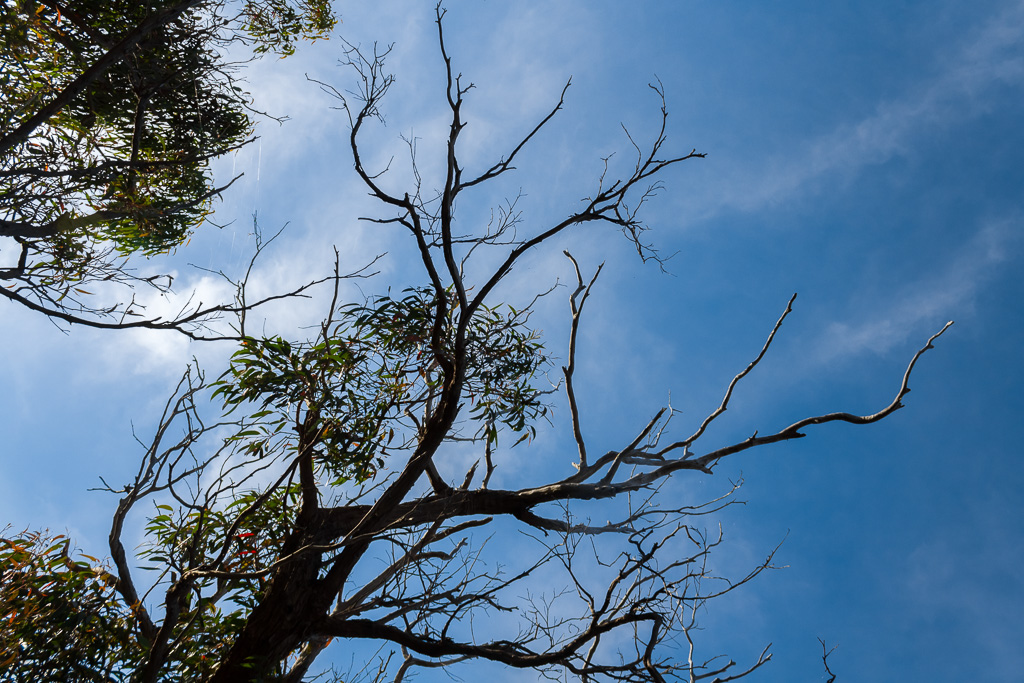 It was eventually time to head off. I was in no rush for another reason. We had the steep climb out of Ironbark Gorge to negotiate, before getting back to the car. We discussed whether a lightweight, hikers only Jet-Pack would be a good idea. I think it would, so I’ve put that on my wish list along with the sponge hat.

After packing up, we began the trudge out and it was sad to leave the breezy cliffs. As soon as we walked back into the gorge the breeze was gone and I was dying from the heat again. Ben got a bit of his walking mojo back and left me for dead. Literally. My excuse for slow walking was I was taking photos. I did pause at the bottom of Ironbark Gorge and wasn’t too impressed with the path rising in front of me. I slowly went for the ‘one foot in front of the other’ approach and I was soon approaching the top. 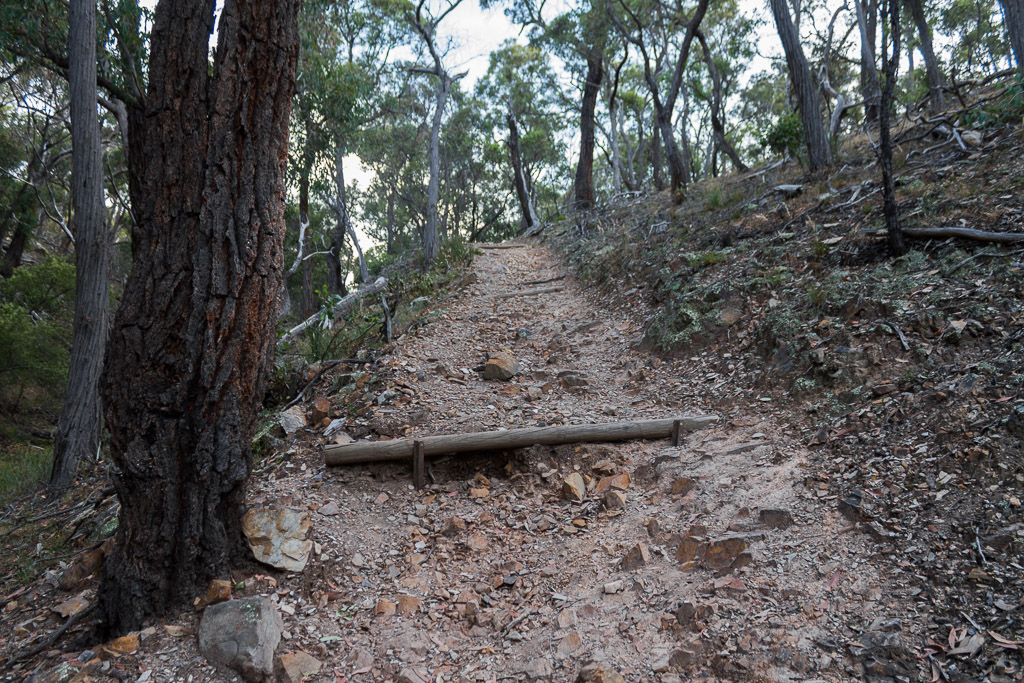 Heading uphill out of Ironbark Gorge.

I stumbled into the carpark and was glad to drop the pack again. Never has a short, ‘easy’ walk caused me so much pain. Whilst struggling for breath, I threw the pack into the car and immediately sat on the leather seats with the air-conditioning on. Besides being close to death, I liked the walk a lot.

Falcons Lookout is a great spot to visit and we plan to return and do the side trip to Ingliston Granites. I think we will do this when the weather is a bit cooler though… 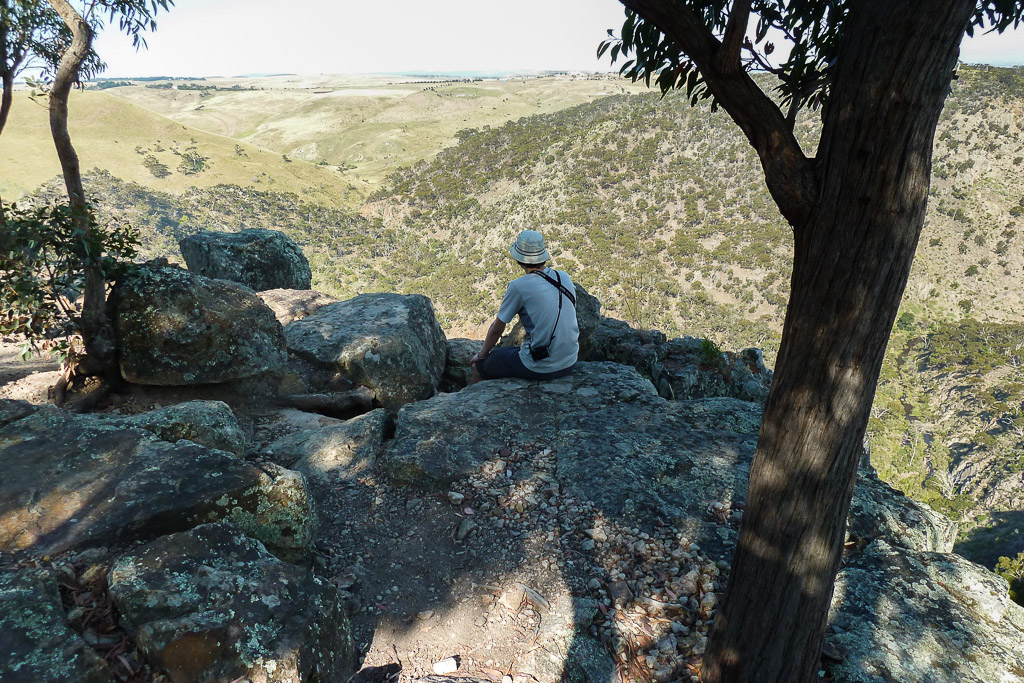