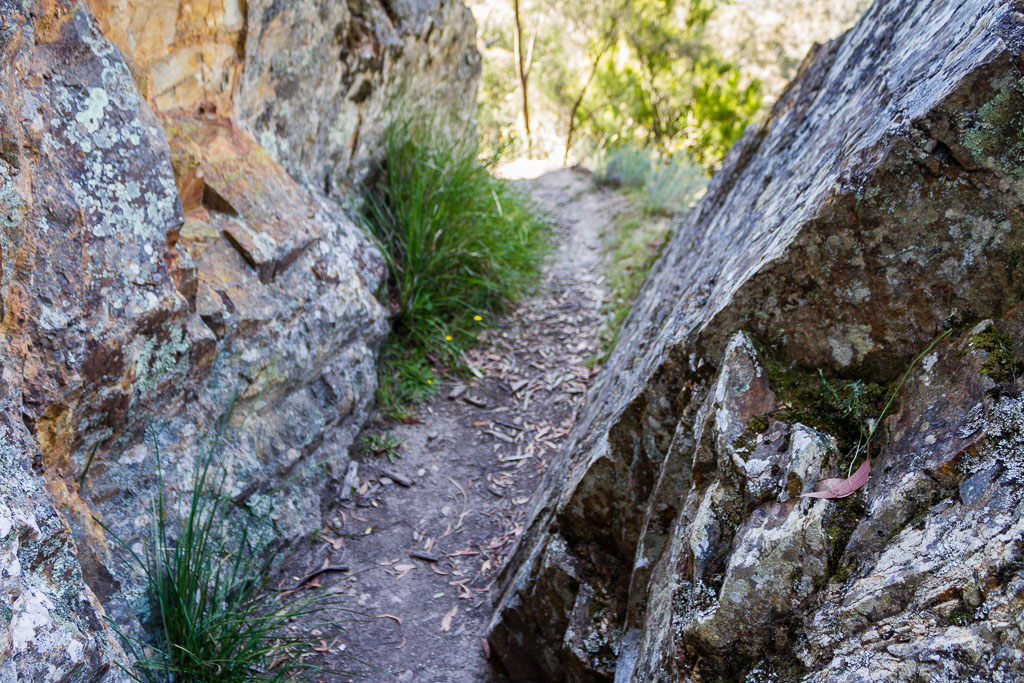 It was time to wheel out the ‘Daywalks Around Melbourne’ book again and find something to walk that had to meet the following criteria. Not too far from home, as we got up late (shocked?) and not too far in distance to walk due to, well…, not a lot of daylight after getting up late. Holidays are a killer. Sleeping, eating, walking, American Chopper. It’s got it all.

Anyway, I found a spot called the Tunnel, Lerderderg State Park. It sounded intriguing, so it was definitely worth a visit. The previous walk with the ‘Grammar Nazi’ had inspired me to pack lunch and take a handful of teabags for both of us, so we could sit down and snack at some point. From now on, any form of walking should include a cup of tea from now on. Even the stroll down to the letterbox.

With our things packed, we headed off to the start of the walk at O’Briens Crossing, which is at the end of a 6 km stretch of dirt road near the sleepy hamlet of Greendale. Actually, I didn’t see anything in Greendale other than a pub.

As we turned onto the dirt road, I was reminded a sporty sedan doesn’t really enjoy gravel too much. We switched on the traditional, ‘dirt road + bumps = shake the dentures’ song. ‘Speaking in Tongues’ by the Eagles of Death Metal. Quite relaxing and it got us in the mood to put one foot in front of the other.

Upon arrival, we noticed the odd punter sitting around in caravans and tents. We enjoyed the soft sound of birds, flowing water from Lerderderg River and generators. Generators? Okay, I’m thinking we should start walking straight away, as the noise was killing me. A quick check of the map, GPS (with batteries) and we were off, but within metres stopping to peruse a nice hat lying on the ground. I didn’t want to touch it in case it was quicksand. 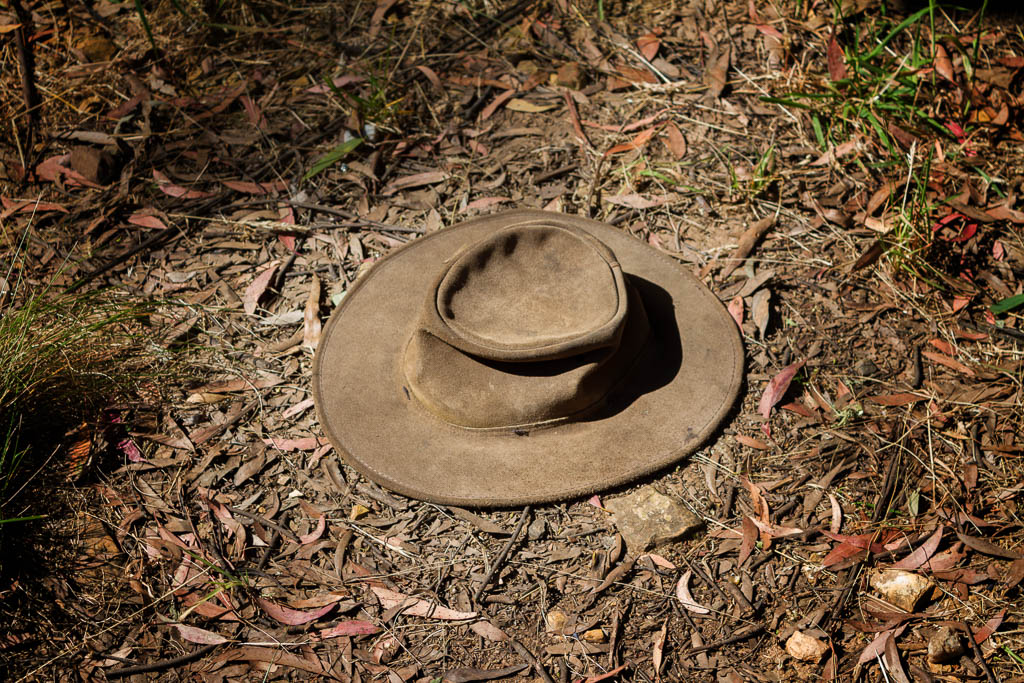 Continuing on we were suddenly slogging our way, straight up a hill, passing a toilet block on the way. Actually, I had barely started walking when I was overtaken by a bloke from Parks Victoria sprinting by with a metal ‘thingo’ in his hand. I’m not sure where he had come from, but whilst sprinting he pointed at the toilet block and muttered, “Nothing to see here, they’re blocked.” Really? Damn. I was hoping to hike around the throne all day. I was wondering how far he could keep the sprint going as the hill was quite steep. He stopped though, put his metal ‘thing’ down and sprinted back down the hill.

This was all getting a bit too hectic, so Ben and I put the foot down to escape. Before long we were walking on a nice path cut into the hillside, passing the occasional spider. 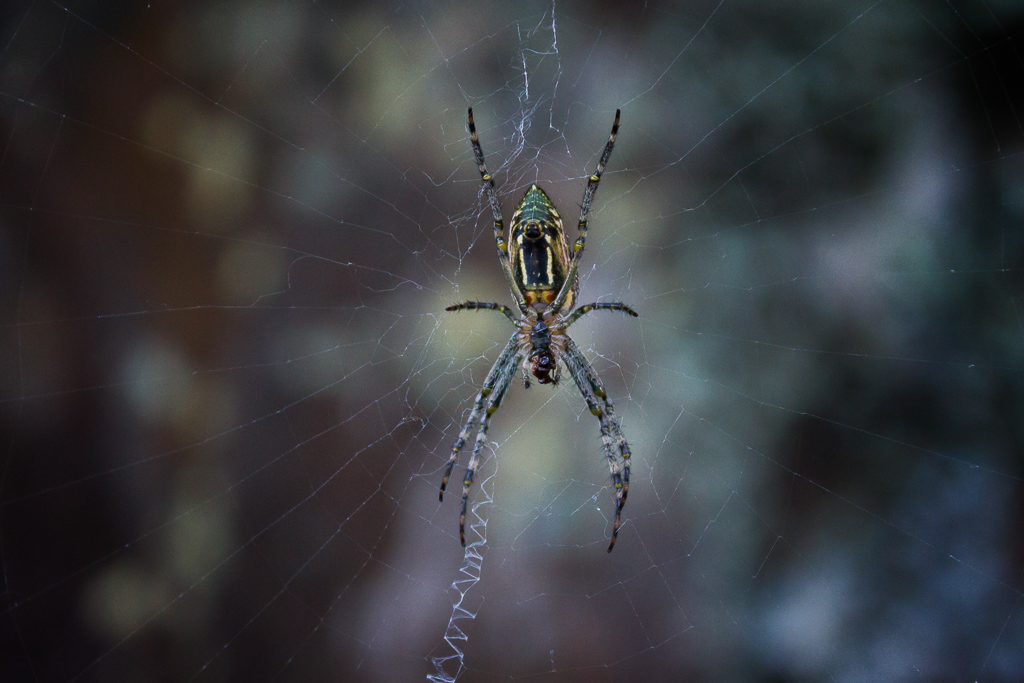 I was taking a few photos on the way, before stumbling down a steep descent on a rough vehicle track to the Lerderderg River. Our main item of interest was a spot called ‘The Tunnel’. This is literally a tunnel, which was dug by ye olde gold miners to re-route the river.

It’s quite nondescript on one side, as the river vanishes into a wall of fallen trees and logs. The miners then panned the resulting dry riverbed they’d created. We decided to kick back and have a couple of ham and cheese wraps with a drink next to the river. I got out the burner for a bit of tea making, and then realised the forgotten item of the day. Cups. I really don’t think I’ve ever walked without forgetting something! 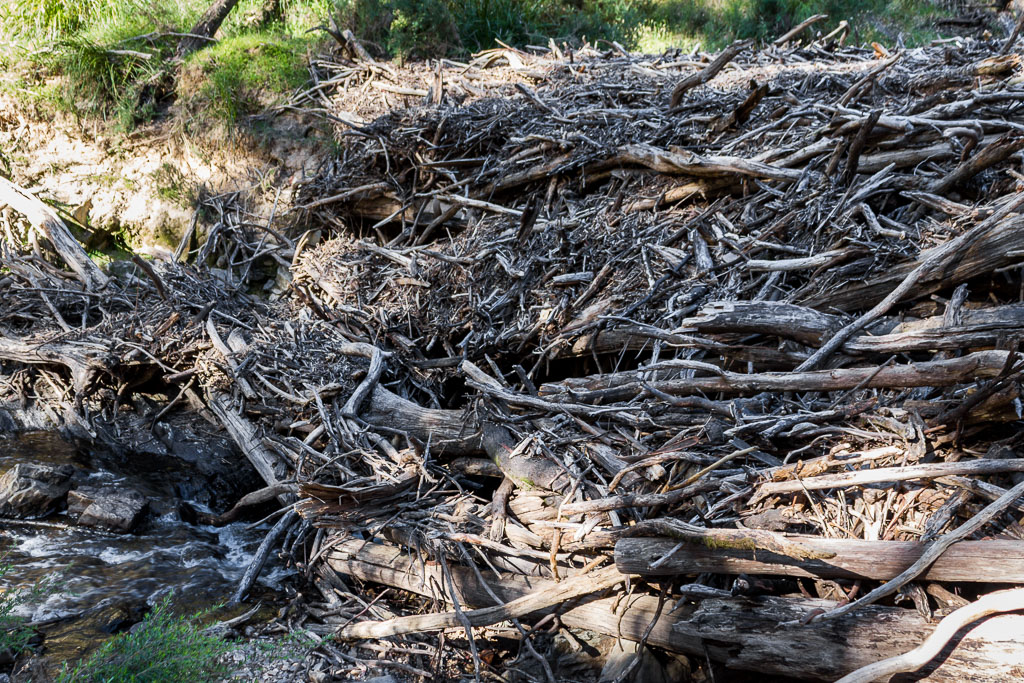 We made do with water instead, which is no substitute for a nice cup of tea. After a bit of lying around, we headed off again and climbed over the wall of logs to get to the other side of the Tunnel and really, we should have done this before lunch as it was a million times more interesting. Deep pools of water under trees would have been a perfect spot for our ham wraps. Oh well. 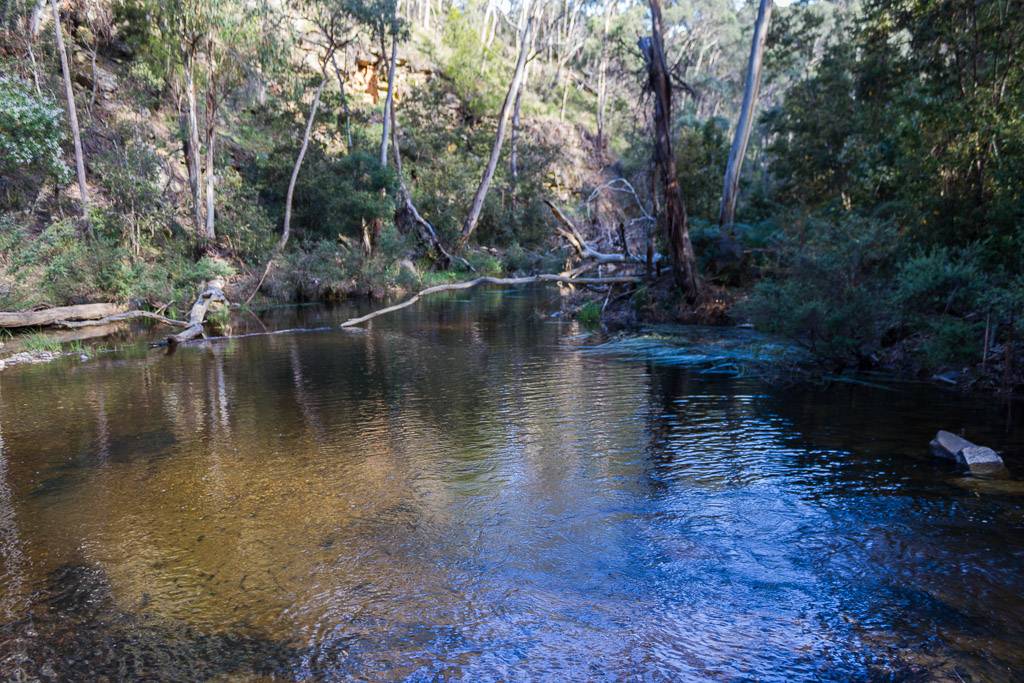 It was also a good chance to examine the Tunnel properly. It was quite amazing to see the amount of digging that was done with hand tools to re-route the river. Those miner blokes were the last of the wild men and I’m not sure if Occupational Health and Safety would approve. My back was feeling sore just looking at it. 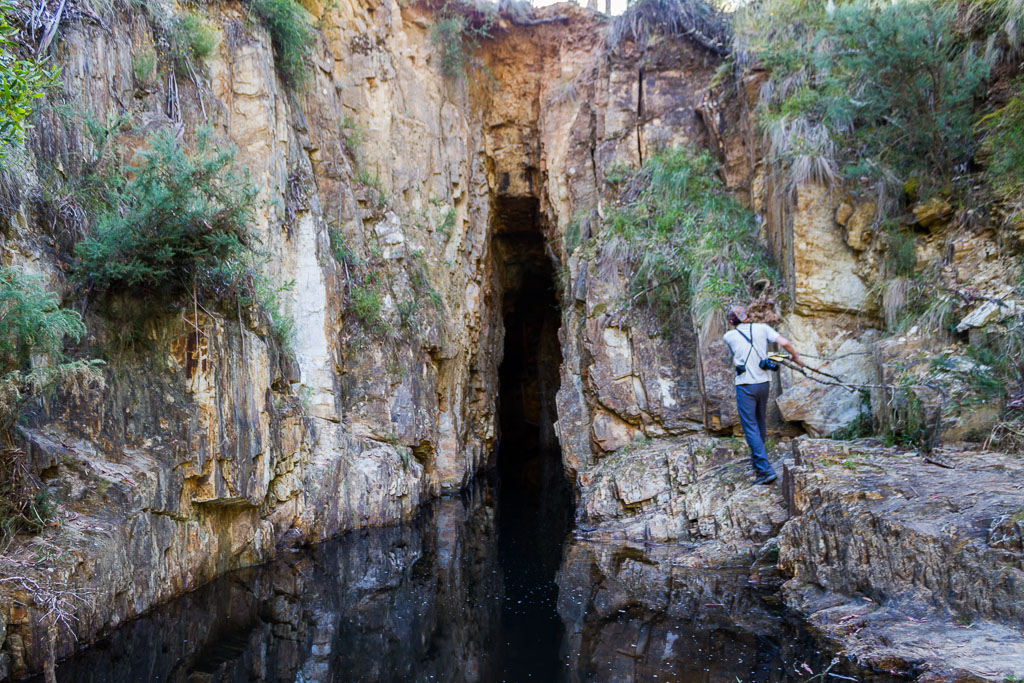 I decided to stand back and take a few photos, whilst Ben went for a closer look. He was getting a decent forward bend happening in order to look up the tunnel, when I heard the sound of something drop into the water. Yep, his sunglasses that were looped onto his t-shirt had fallen in.

It was quite disappointing as they were a pair of Bolle safety sunglasses, approved to AS/NZS 1337 for medium impact protection. These sunglasses can withstand a stray bullet or two, which can make hiking exciting at some stages.

I then went for a half-baked rescue attempt. All of the water I’d seen during the day was no more than a foot deep. Where the glasses had fallen in though it was jet black and appeared deep. I grabbed hold of a tree branch lying nearby, which had to be over 10 feet long. I was getting quite a he-man action going, as I strolled back to the Tunnel with a pack on and the world’s longest log over my shoulder.

I passed the log to Ben who promptly dropped it into the water and it fell to the other side out of our reach. It was a complete fiasco and it was time to raise the white flag on the rescue attempt. 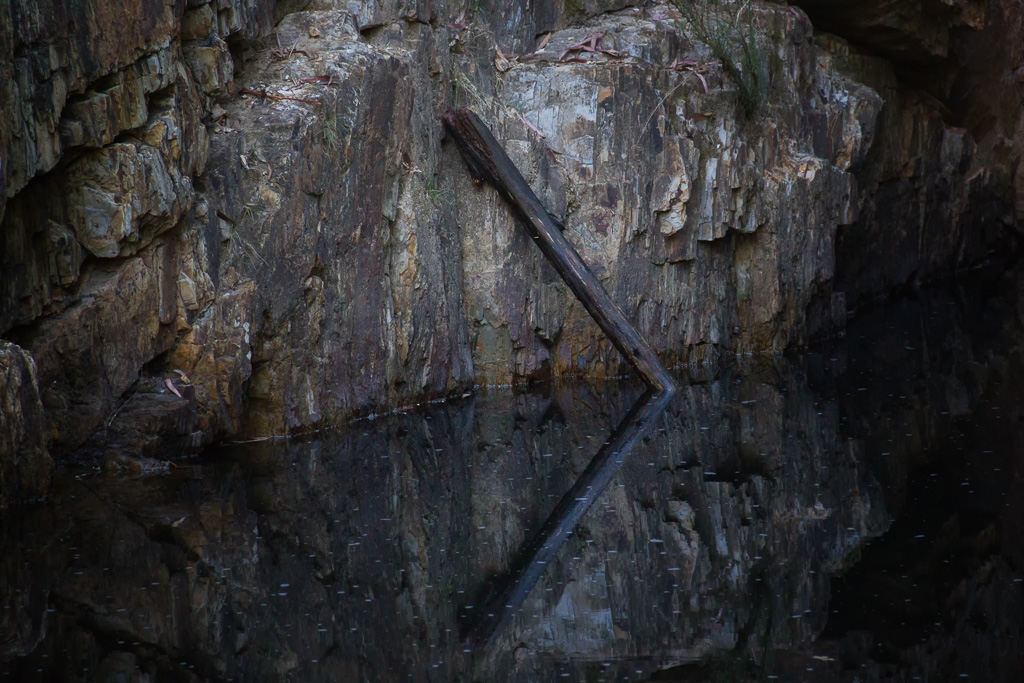 After a short time paying our respect to the lost sunglasses we began to move on. It was time to cross the river… 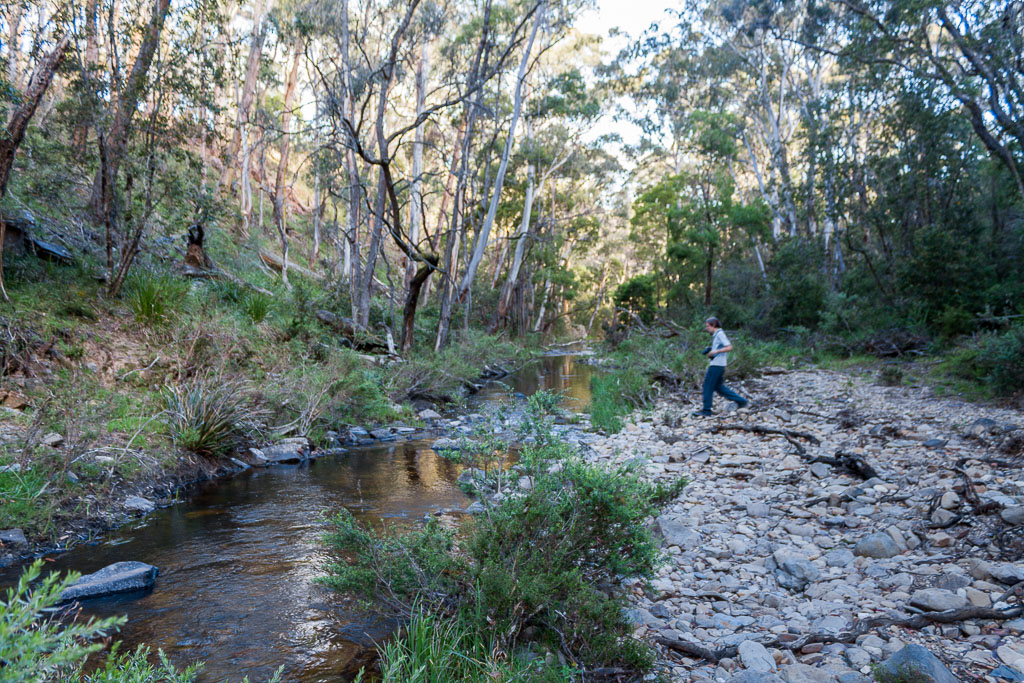 …and walk a short distance where an old miners hut is located. The track was now quite rough and a bit vague in places, as we suddenly walked into a moon landscape. There were plenty of trenches and holes in this area from old diggings.

We found the miners hut which had collapsed, but it was quite interesting to have a look around and admire the old miner’s ‘Pump’ water-bottle, which was inside the ruins. I guess someone was admiring the ruins and thought it would be nice to throw the drink bottle they no longer wanted inside. I mean, carrying an empty drink bottle is tiring isn’t it? No point carrying once it’s empty, so really the only solution is to throw it away. Who are these people? I had an image of introducing that person to the lost sunglasses. Naturally, with a couple of bags of cement tied around their ankles. 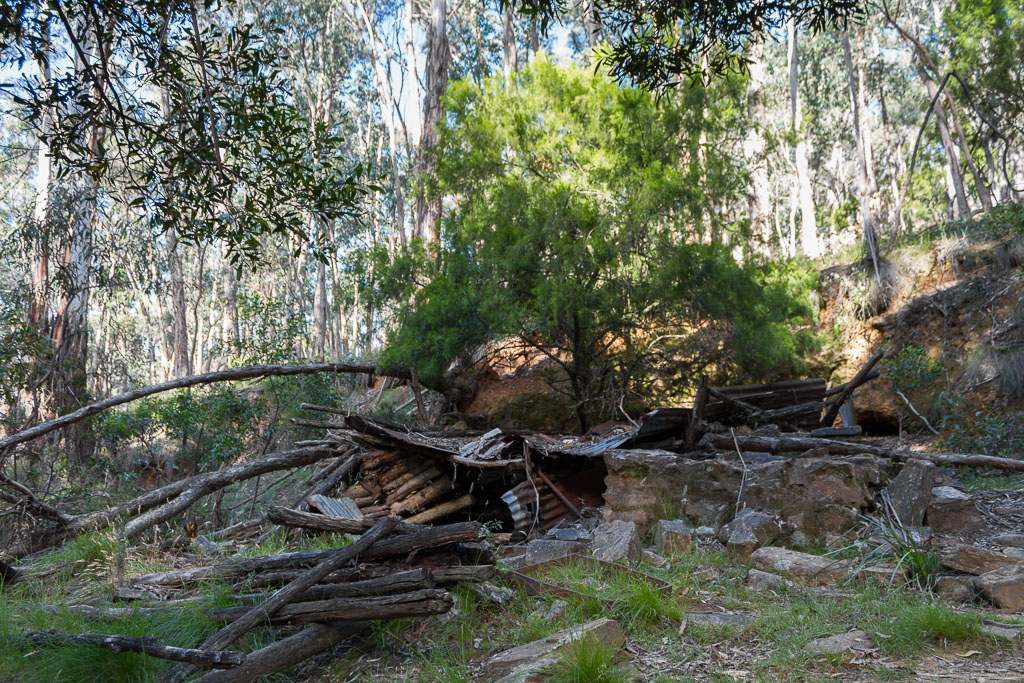 It was now time to watch our step, as there are dozens of holes and trenches near the hut. I’m assuming there was more than the one miner from the nearby hut digging in the area. If it was the same bloke, he must have looked like Hercules. I get sore raking up the leaves near the back door at home, so I can only imagine what these gold digging blokes were like. I’m pretty sure there were plenty of beards on offer for starters

Ben was so impressed he started humming ‘Gold Digger’ by Kanye West. I preferred the mash-up of the same song by The Legendary K.O. called ‘George Bush Doesn’t Care About Black People’. Anyway, as I was getting so into it, I became aware of my hiking pants slipping down at the back due to the pack pushing down. I was feeling a bit hip-hop, which fitted the music with half my arse showing. 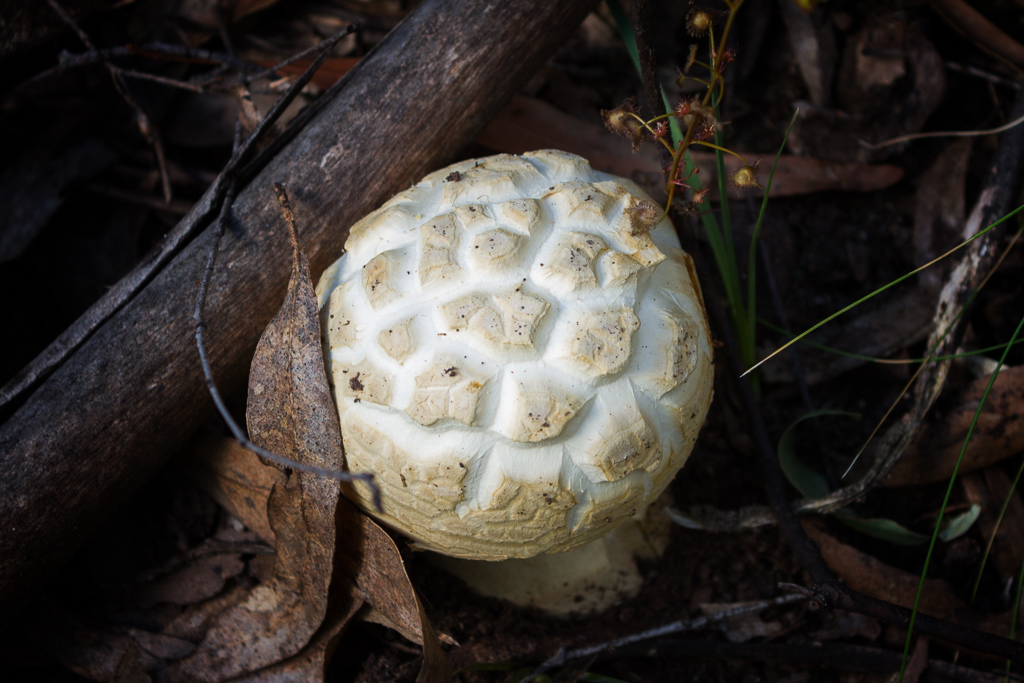 The path was now pretty rough and it appears to not have been walked very often. The track faded in and out of fallen trees, but it was now a matter of following the river back to the car. We had to walk uphill at times to negotiate cliffs blocking the way, but it gave me a good opportunity to look at the river from above. It’s quite a rugged area. 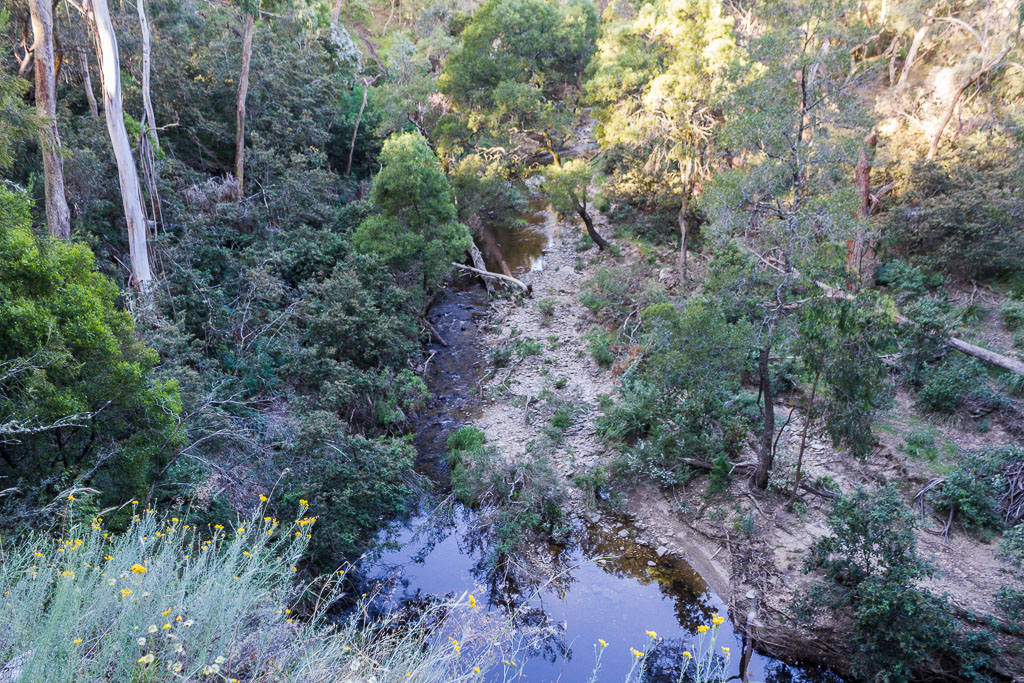 We were both enjoying the walk, as it felt quite isolated. The sound of the river and the odd bird were quite relaxing, whilst it was mixed with the sound of death metal. Hang on. Did you say death metal? Yes I did, and I think I can hear the dulcet tones of ‘Impaled Nazarene.’ We kept walking in the direction of the ruckus.

On the opposite side of the river was a clearing with a couple of parked four wheel drives, a fire and tents. We then saw three blokes with very large beards, wearing flannelette shirts, whilst seated in directors chairs, facing the river with beers in their hands. They were taking in the sounds of the gorge complete with death metal booming. What do blokes like this get up to whilst away together?

I thought I saw another bloke wearing a fishnet singlet and small leather shorts, but I could have been mistaken. We’d come to crossroad, which I couldn’t even see on the map, but I was keen to keep walking along the river. We could feel the beady eyes of the beards watching us and the music was making me a bit queasy, so we moved on. There were some nice flowers to look at though. Imagine the flower below with ‘Impaled Nazarene’ in the background. 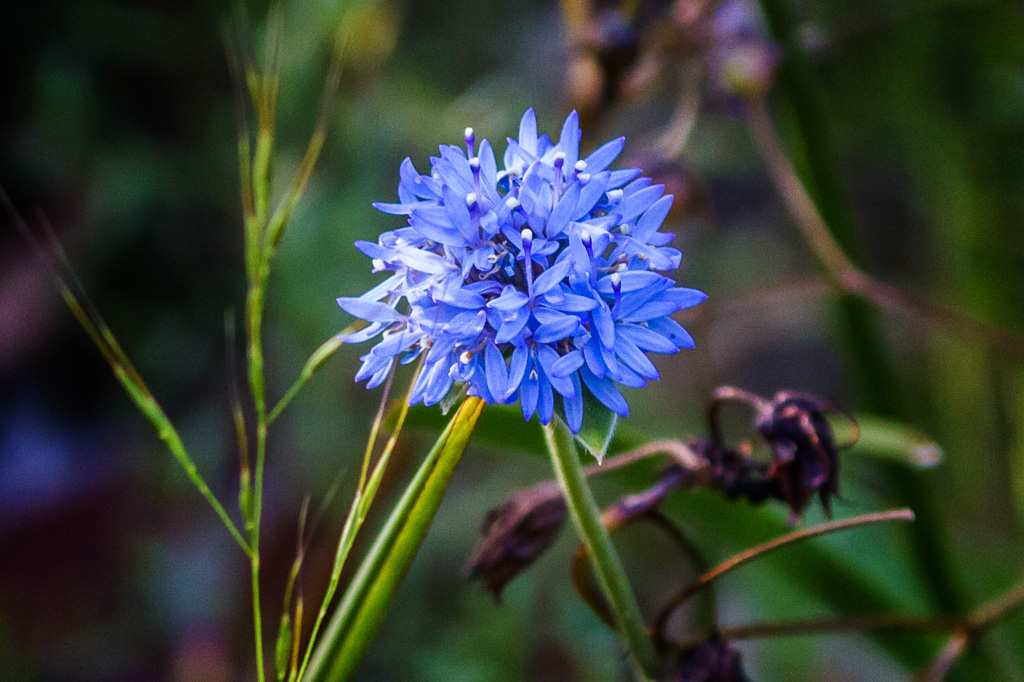 The track was rough with some large fallen trees along the way. This slowed us down a little by having to clamber over them. One tree was particularly impressive and I could only imagine what it would sound like when it hit the ground. Probably not loud enough to block out the death metal, but loud nonetheless. 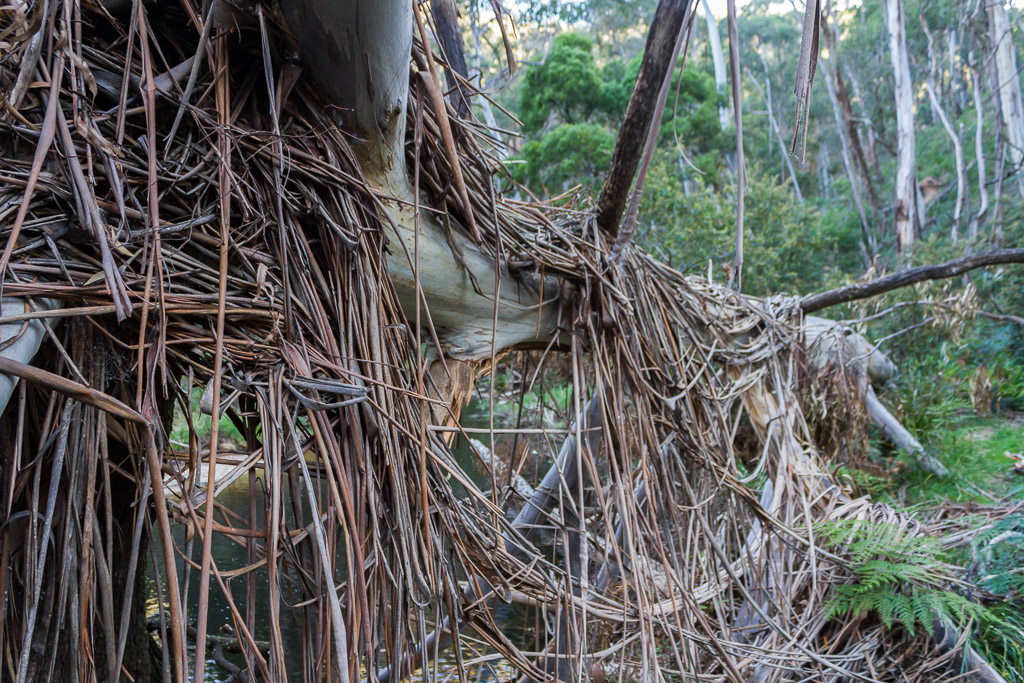 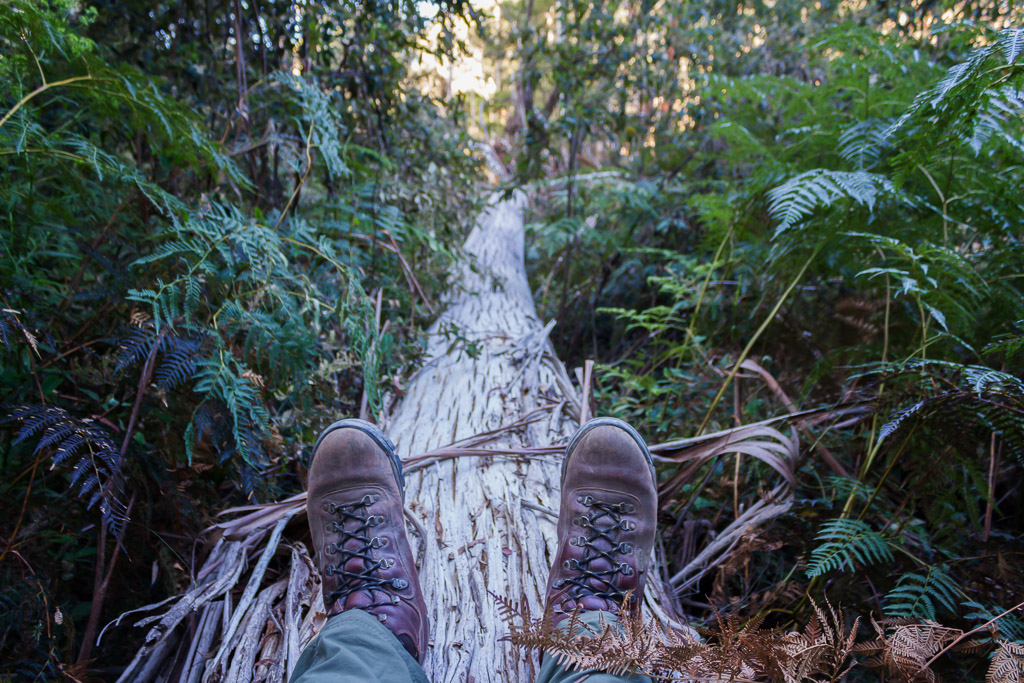 There was another hill to struggle over, but before we knew it we were back at O’Briens Crossing. It was quieter though, as the generator we heard at the start was switched off. It was a nice little with enough to keep me interested. I’m loving these short walks!

It was a matter of heading off on the dirt road, with the sound of ‘Speaking in Tongues’ by the Eagles of Death Metal again being played on a loop. I hate to see what happens when we have to drive on a dirt road that’s more than 6 km long. The song might wear out its welcome. 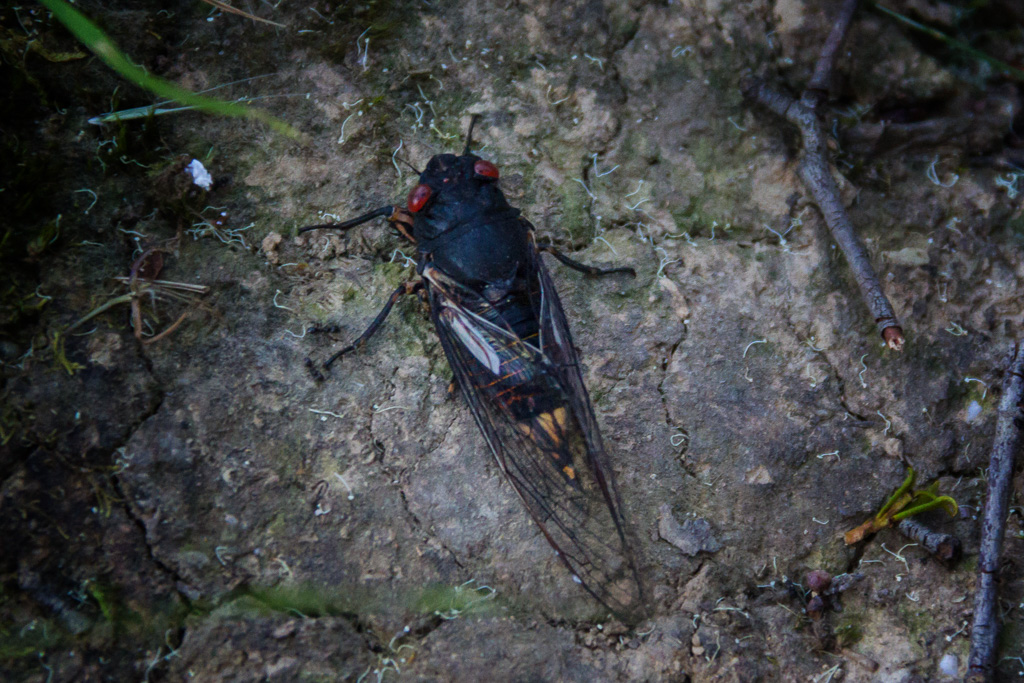 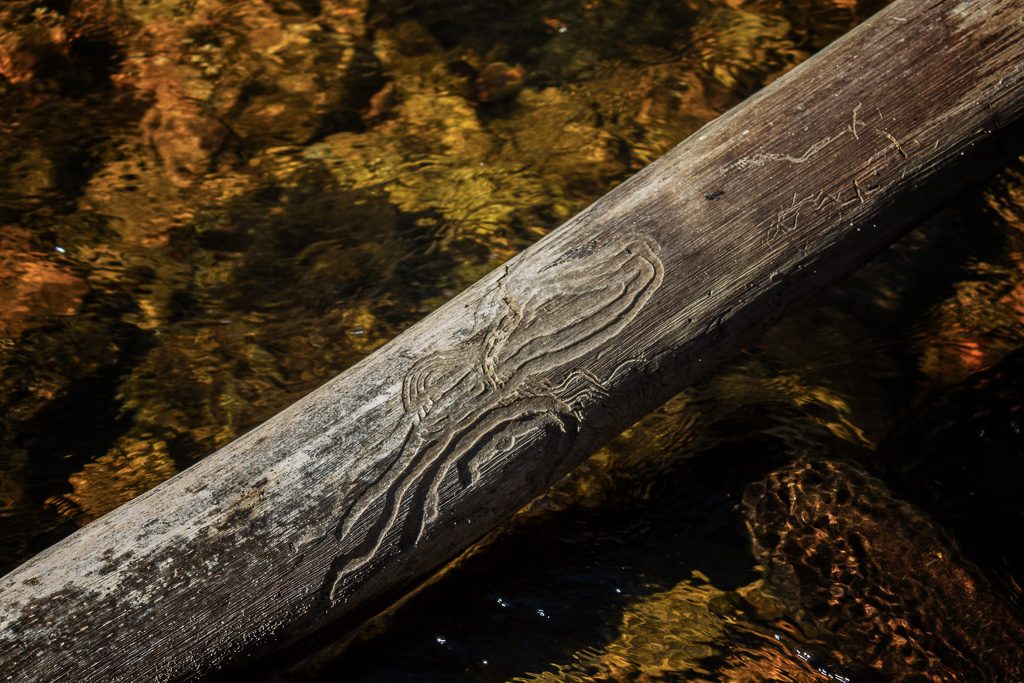