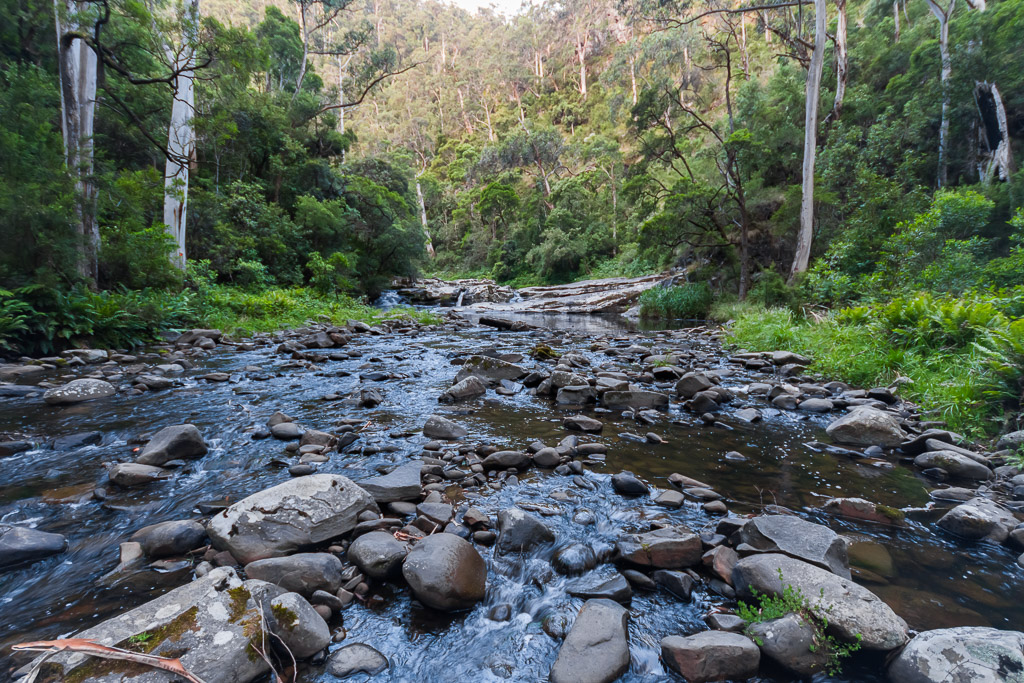 You may look at the occasional entry in this blog and notice I only did this walk a few weeks ago. There was a problem though. On that occasion, light was fading and Ben and I didn’t make it to the official ‘Cumberland River Falls’. I liked the river walk though and thought it would be nice to actually see the falls. It would also be a nice way to kick off the New Year with a bit of walking.

Do I have an official name for this walk? No, not really. All I have is the Cumberland Falls, Cumberland River. That seems to make sense. The night before, in order to confirm what we were to walk to, I did an image search for the falls on Google and was gobsmacked to see photos of an absolutely ball-bustingly, high waterfall. When it was described as the ‘Niagara of the South’, I began to think I was looking in the wrong spot and with a few more mouse clicks, I found out this ‘Niagara’ was in Kentucky, and not Lorne on the Great Ocean Road. Even more interesting is there were no photos of the local Cumberland Falls. I guess I’ll know the Falls when I get to them? Maybe. 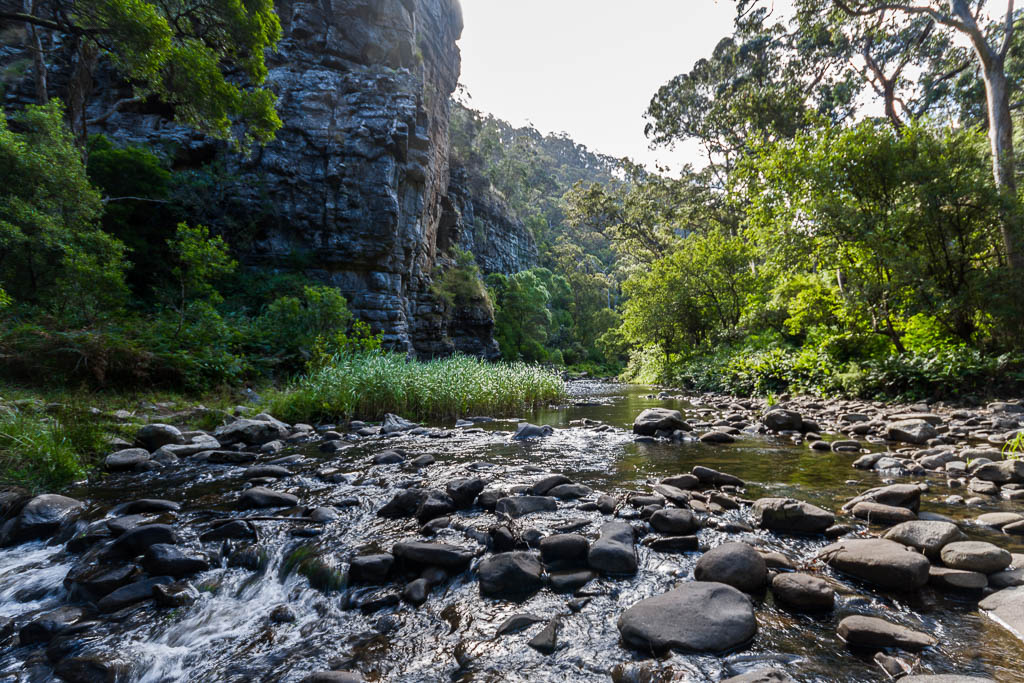 I was heading out with my trusty sidekick son and a visiting interstate friend. I guess there’s no name for this person other than the ‘Grammar Nazi’, who from now on will be referred to as ‘GN’. Who else would slap me across the face with photocopied pages from ‘The Australian Government Style Manual for Authors, Editors and Printers’? Apparently I was guilty of a few grammar crimes in this blog, but after some reading, I’m now up to speed with ordinal dates, modal verbs and hedge words. Well, less crapping on and more walking is required at this point I think.

The plan was to walk from the Cumberland River Reserve camping ground, up to the falls and return. Upon arrival it appeared the camping grounds were jumping. Kids were playing and men were sitting in chairs drinking beer and contemplating their third barbecue for the day. We set off through the camp grounds and I couldn’t help but admire all of the arteries hardening on the barbecue eaters.

Actually, most people appeared to be in the same positions when I passed through a few weeks ago. I began to think I was strolling through an Australian outdoors version of Madame Tussauds, as quite a few people had a pale waxy look to their faces. Then again, maybe they’d overdosed on sausages? Anyway, we successfully negotiated the camping grounds and began walking beside the river. On the way, I noticed a sign, which stated, “only experienced walkers should proceed past Jebbs Pool’. 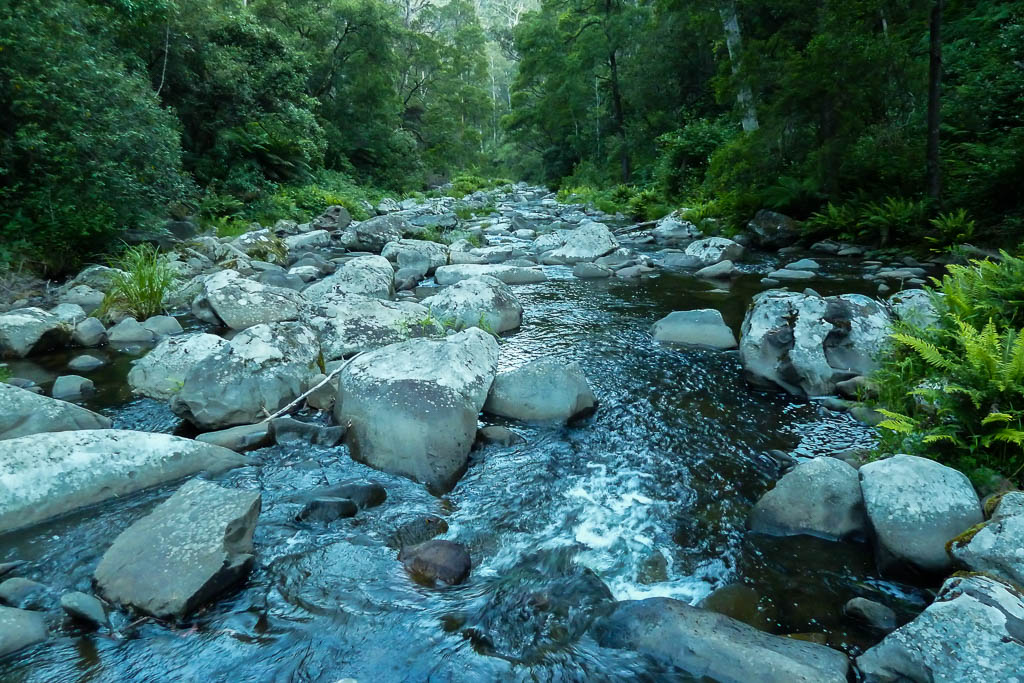 It’s a lovely spot to walk, as the tall gorge walls give a feel of isolation, when in fact grilling lamb chops are only a kilometre or so away. After a couple of rock hopping river crosses we arrived at Jebbs Pool. Apparently only experienced walkers are suggested to keep walking. I guess Parks Victoria do have to cater for boneheads, but I think responsibility for ones actions is still allowed these days. I mean, we’d only been walking for 10 minutes, which is quite short in hiking terms I think. Well, like pioneers we continued on into the great unknown.

After a short wander, we came across a couple heading in the opposite direction. I said, “G’day” to the bloke and he just looked at me and kept walking. What’s the etiquette these days? Am I allowed to say hello to strangers or is it strictly forbidden? Clearly it should be outlawed, as this bloke looked at me and made no effort to move his lips. I guess hiking can be pretty tiring and excessive movement of lips could add up to early fatigue?

What’s interesting is when I made this observation to Ben, he told me the bloke said hello to him. Okay, now this is getting weird. Maybe the bloke was ‘hello’ exhausted? It could be personal though and I could be a dead ringer for the Elephant Man, or maybe he was speechless when he saw my hunky frame sporting nipple clamps on the outside of my Columbia hiking shirt? Anyway, we had more exploring to do. We reached a waterfall in pretty good time and it was decided this was just a waterfall and not the official ‘Cumberland River Falls’. 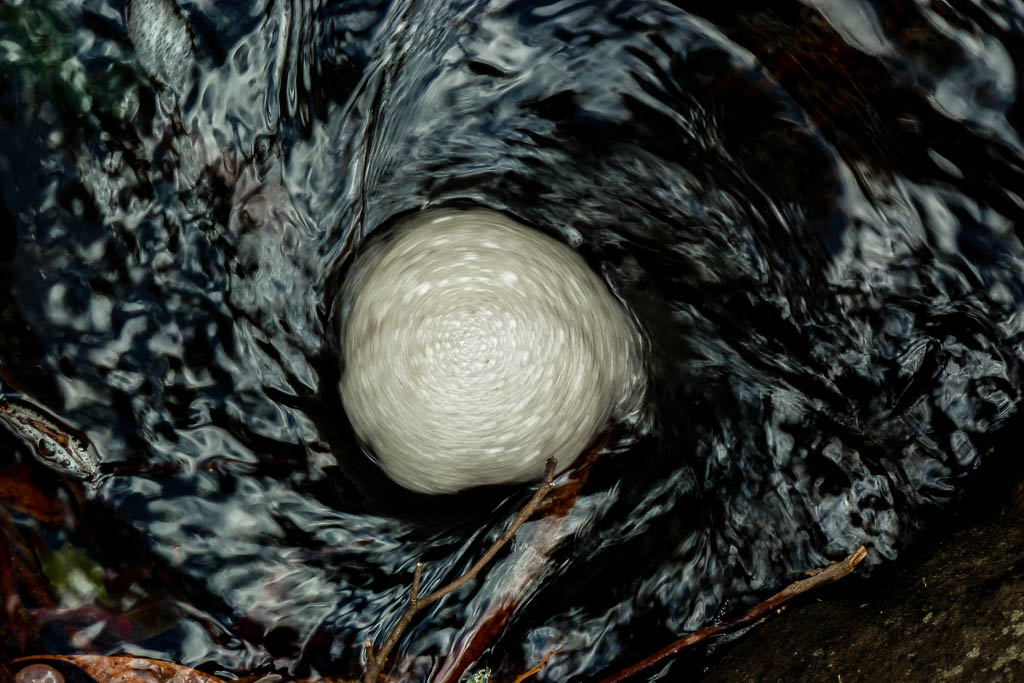 Further along, the track gets a little rougher and wilder. It appears not too many people make it out of the camp ground and continue past Jebbs Pool? It would have been nice to have my GPS with me in order to measure the distance we’d travelled. Well, I did have the GPS, but it was missing a vital component. Batteries. It seems I’m incredibly organised when getting everything together for these hikes, but I always omit something important. I think I need to invest in a hiking whiteboard.

Whilst contemplating whiteboards we walked around a bend and saw another waterfall. It had to be the elusive Cumberland River Falls. In my walk notes, the falls are described as,

‘…Cumberland Falls tumble noisely over a series of black rock steps in the river…’. 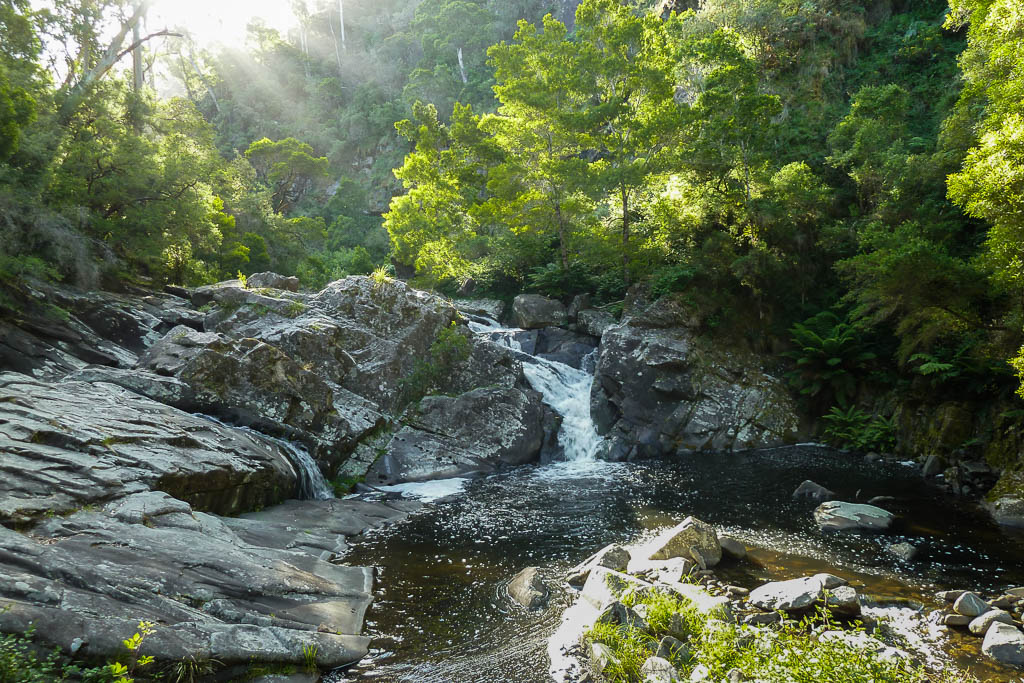 Okay, there wasn’t much noise and not a lot of tumbling, but I sent Ben further up river as a forward scout to check if there were more to be seen. He came back telling me the path had vanished and it was all quiet. Completely tumble free in fact. 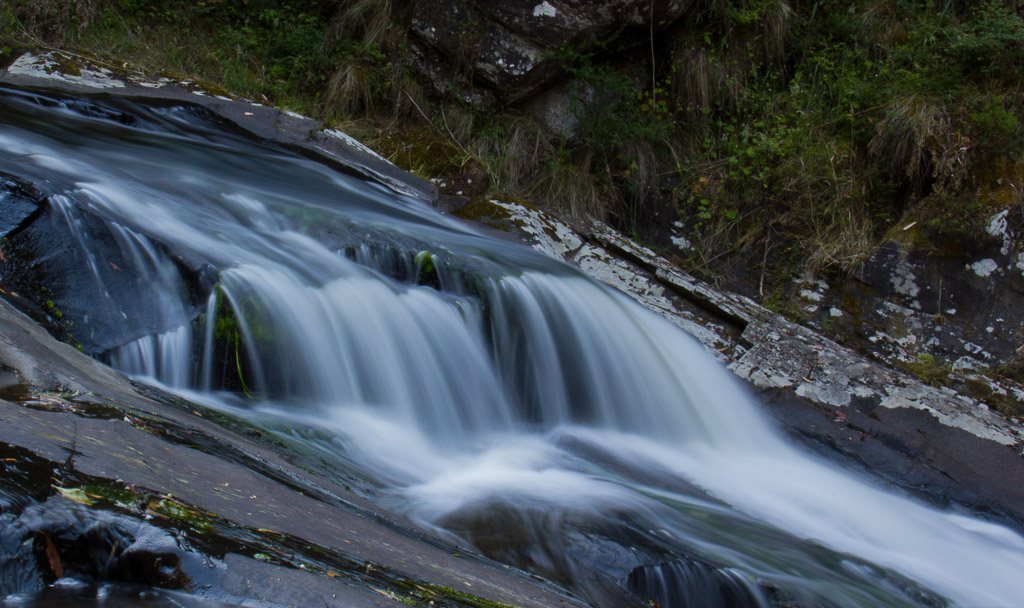 ‘GN’ was pretty specific about what sustenance I needed to bring for our waterfall food stop. Chicken sandwiches, but no mayonnaise. Jungle Jellies, jelly babies, nut mix, cashews and tea. Tea had to be Dilmah though. I don’t own a Thermos Flask, so I brought my hiking burner with gas bottle and, incredibly I remembered an important aspect of the burner. Matches.

We sat down with the sun setting, filling our faces, whilst trying to get a decent picture of the waterfall. It would have been great to have a tripod, but I forgot it. Well, it was in the car, so technically I hadn’t forgotten it. I think I need the hiking whiteboard in the car, as often I have the item, but I just forget to get it out of the boot. 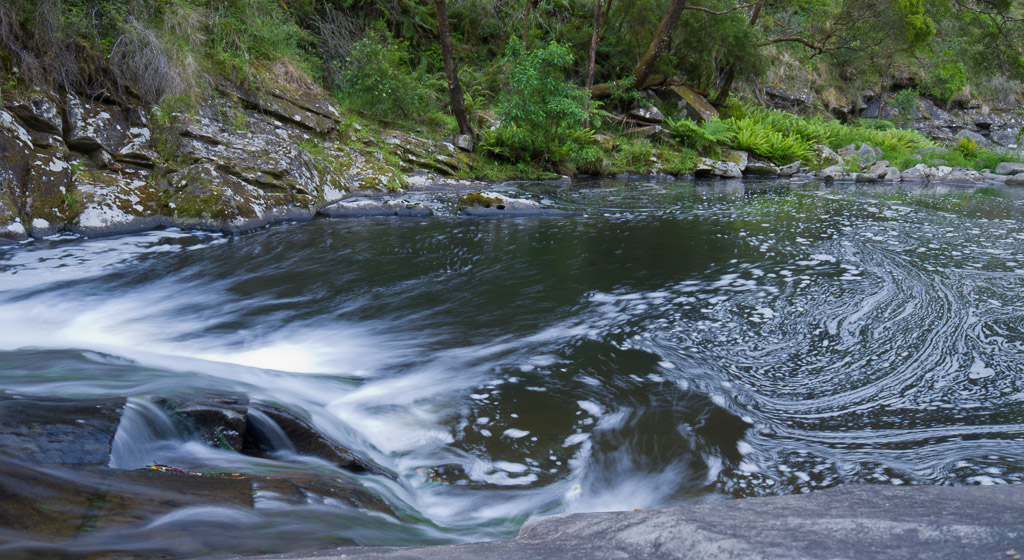 Eventually, it was time to head back, as light was fading. It was interesting to find the walk back seemed to take half the time as the walk up. I’m not sure what happened there, as I was stopping quite often to take pictures. The light had a nice glow to it, so I went a bit shutter mad. 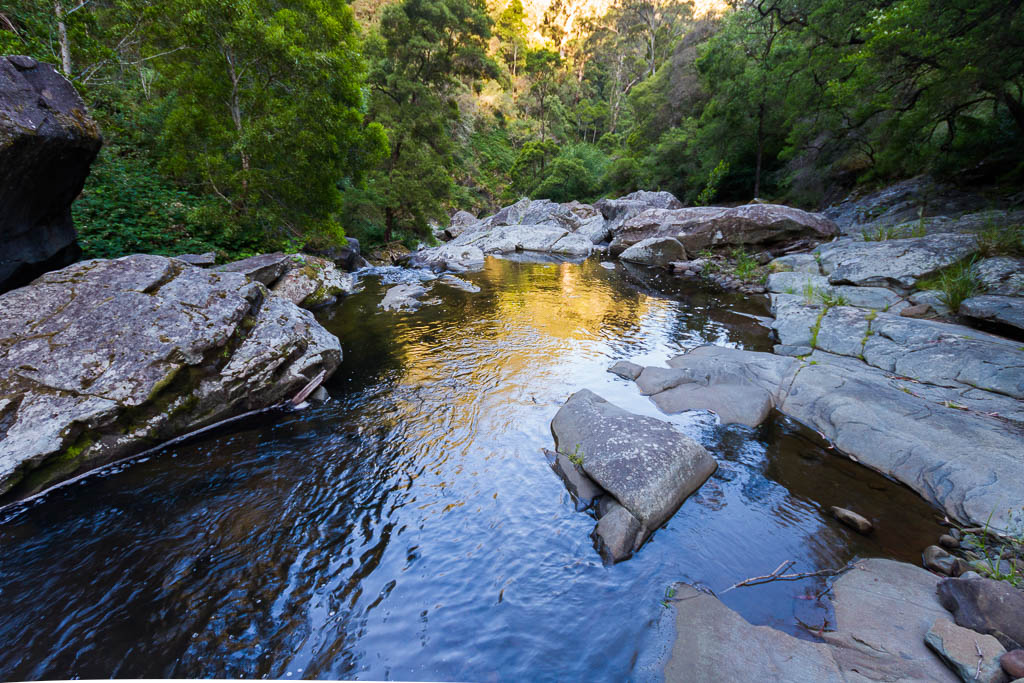 On the way back, we did come across a group of people. They were on the other side of the river bank, but I decided to let out a full throttle ‘G’day’ to them. I was just analysing the ‘return hello’ factor, so I can find something to write in this blog entry. The adult male in the group looked at me, but I didn’t hear him say anything in return. GN advised me they were speaking in another language so my beefy ‘G’day’ may have just sounded like a grunt to them. I made a mental note, “Not ignored, maybe.”

It was pretty straightforward, rock-hopping back with the sun getting low in the sky. Some wildlife was still to be seen though, as a few lizards were enjoying the sun heated rocks. 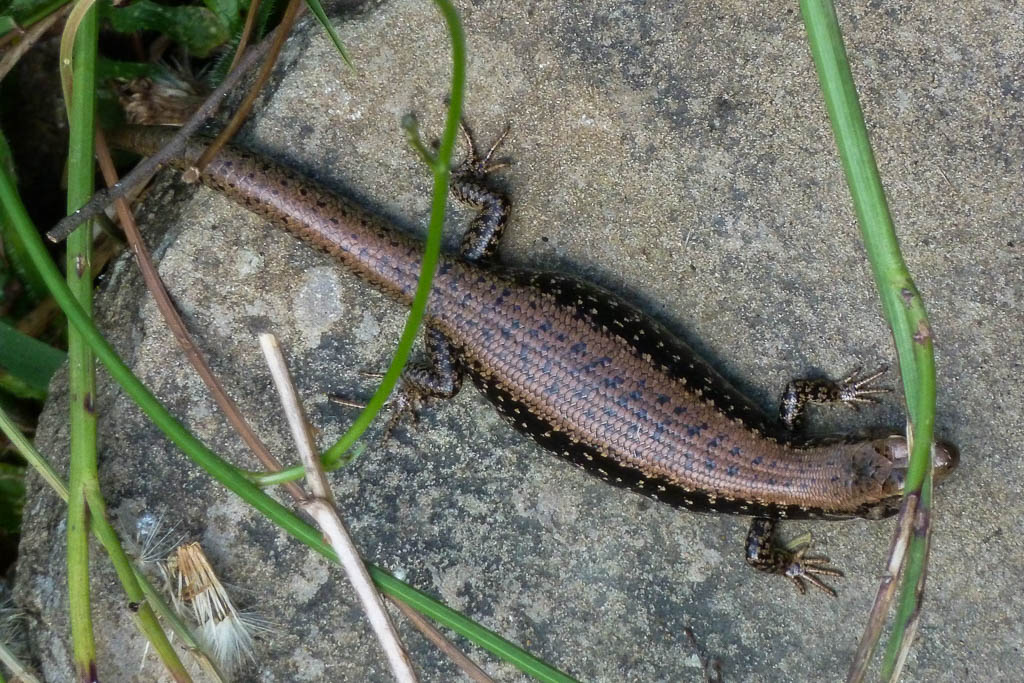 Then it was time to re-enter the infamous camping grounds. It appeared time had stopped in this particular spot, as there’d been little movement of the beer drinkers. I did notice one seated bloke with a beer in his right hand and a lamb chop in his left. I was positive the beer was in his left when I saw him earlier, so I think this was proof he wasn’t a wax dummy.

As we walked out, a kid on a bike came riding slowly towards us and said, “Do you like potatoes?” It was a pretty strange question, but I replied I loved them, especially with a roast. He had an odd look on his face and continued on. GN then advised me he’d actually said, “Did you take photos?” Oh, I see. Hang on, maybe everyone has been saying ‘hello’ back at me, but I’m not actually hearing it due to my cloth ears? GN just looked at me and said, “Don’t forget, when you write this up, potatoes has an ‘e’ in it.” It was quite a day… 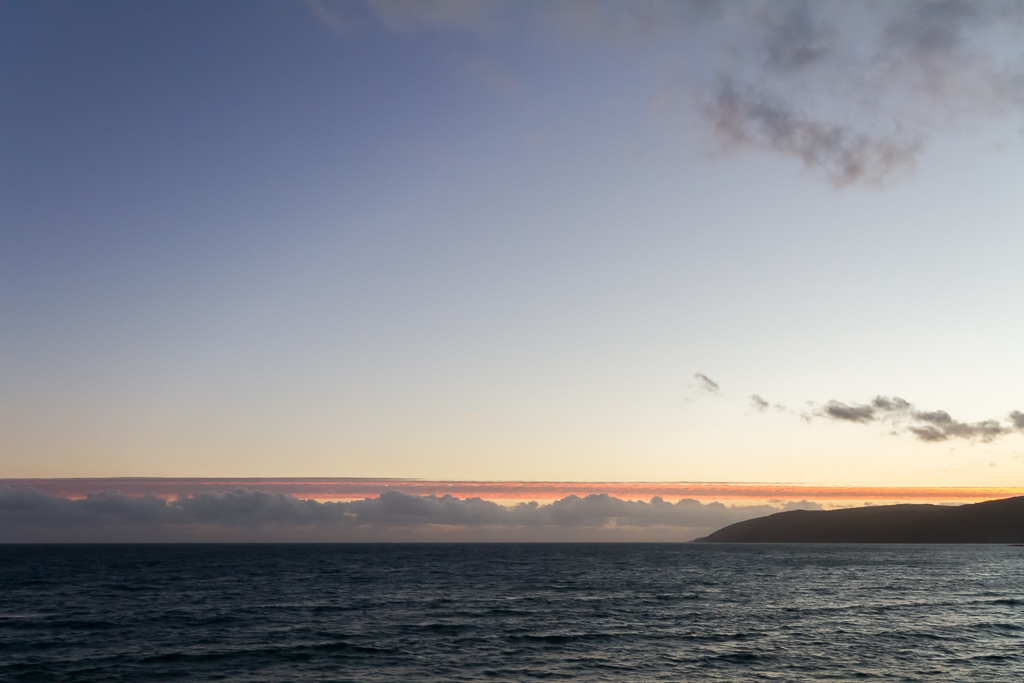